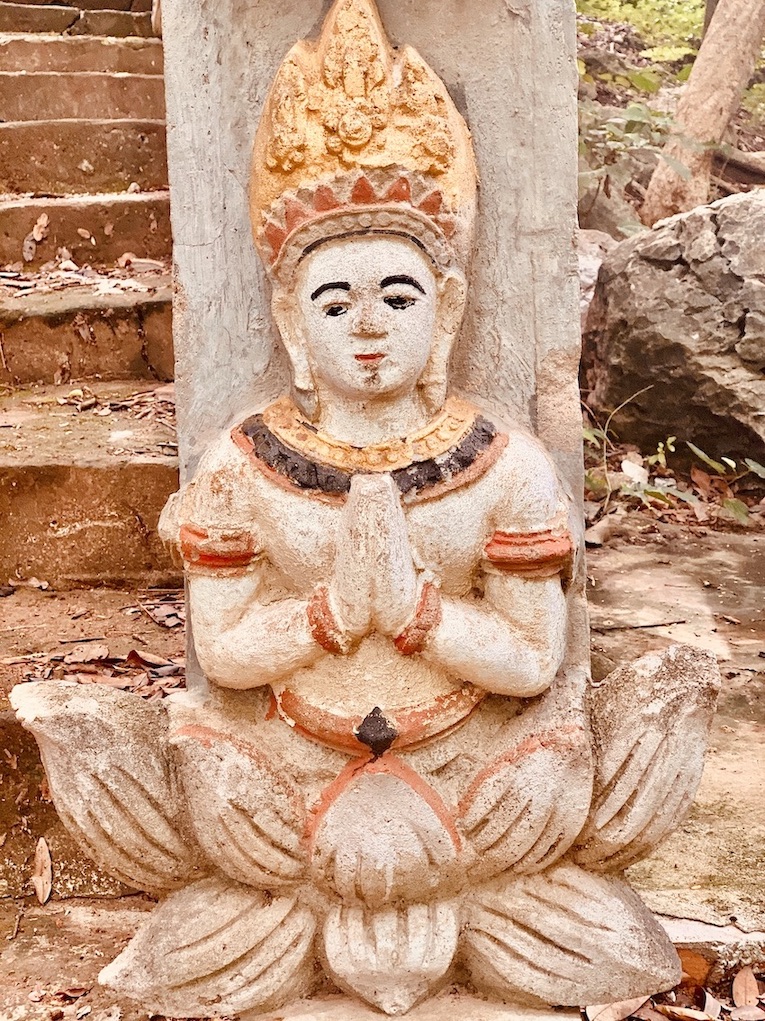 September 2020. Sladja and I had been holed up in our guesthouse room for the better part of a week when we started to become agitated. We needed to get out, stretch our legs and cross another sight off our Kampot to-do list.

Scanning our notes, I found my eyes settling on a 7th century Hindu cave temple out in the sticks, eight kilometres from the city centre. Buoyed by the prospect of a tuk tuk ride out into the country, we got back in touch with KKS Travel to arrange the transport. 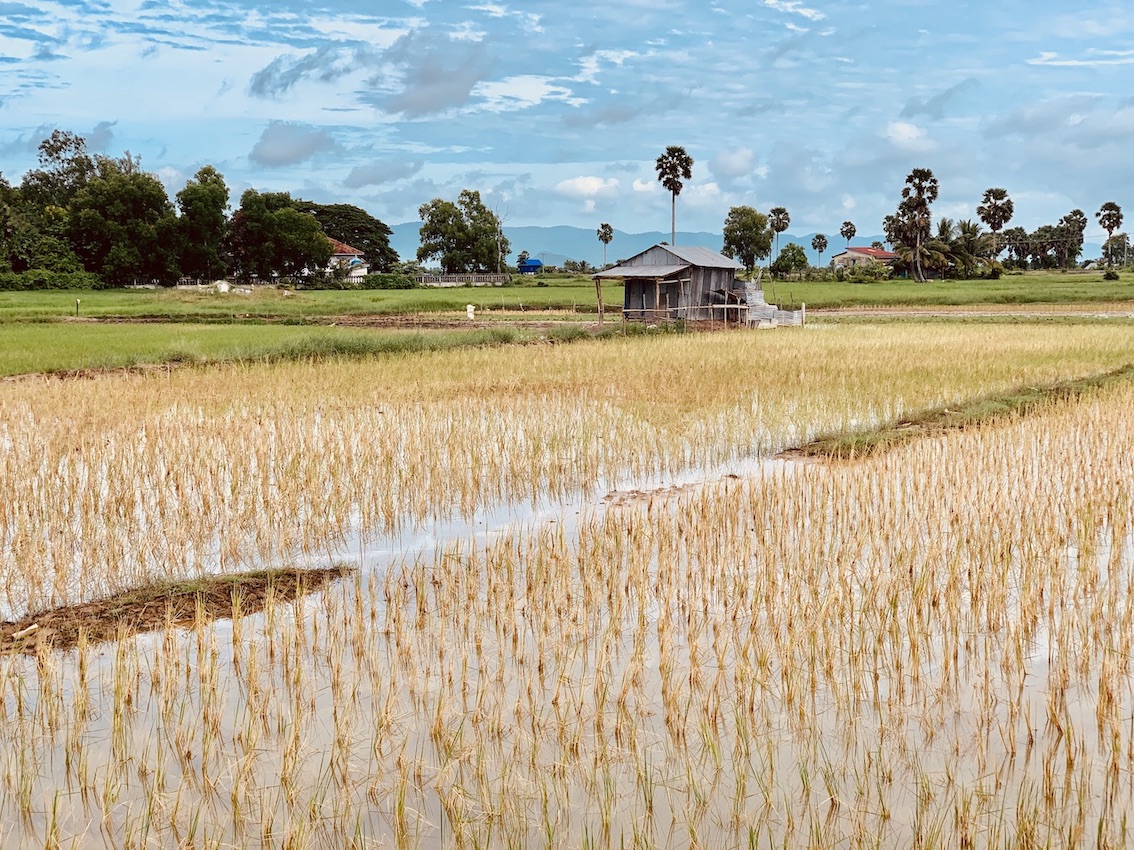 On the way to Phnom Chhngok Cave Temple.

Happily, we were picked up by San, a local Khmer man who’d so expertly taken us around Bokor National Park. Needless to say it was another horribly hot day, hence we were grateful for the cover as San steered us through increasingly bumpy country lanes. The landscape was lovely, a series of mushy rice paddy fields flashing by as we went. 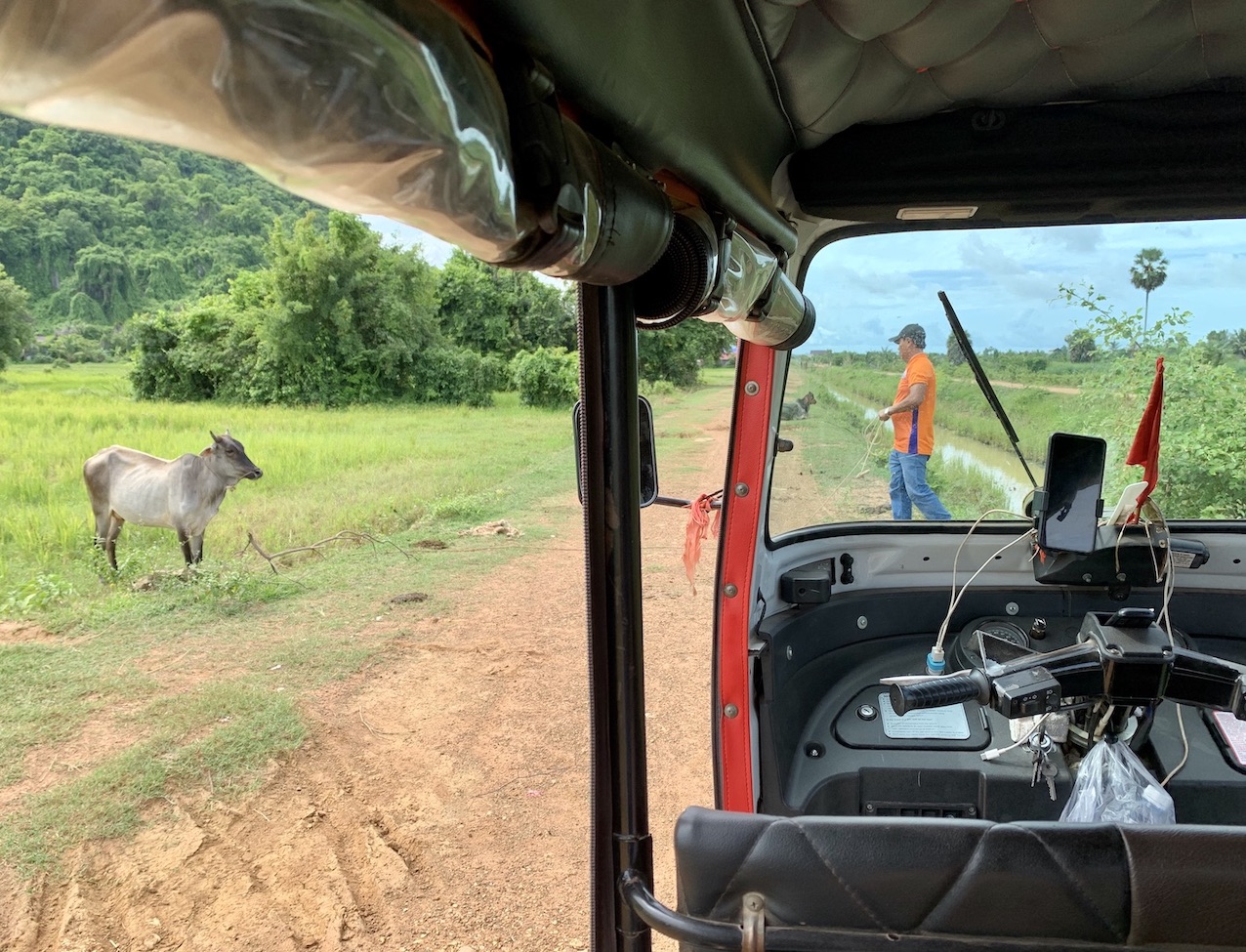 On one particularly hairy dirt track road, San had to jump out to clear a couple of lounging cows. One of them eventually got up and mooched over to the grass. The other was in no mood whatsoever to move, thus we simply squeezed past her through a large pothole. 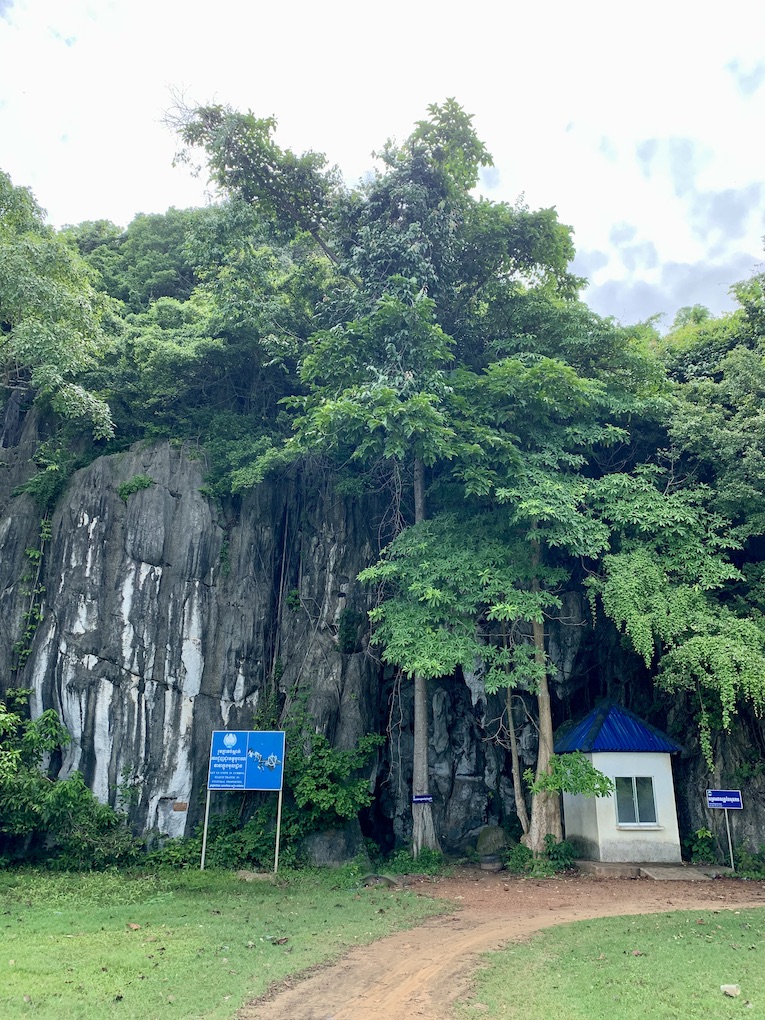 Pulling up to the temple entrance, we saw a quartet of local children come sprinting out of a nearby hut. We knew this was coming, as we’d read a few online articles about Phnom Chhngok Cave Temple’s impish guardians. 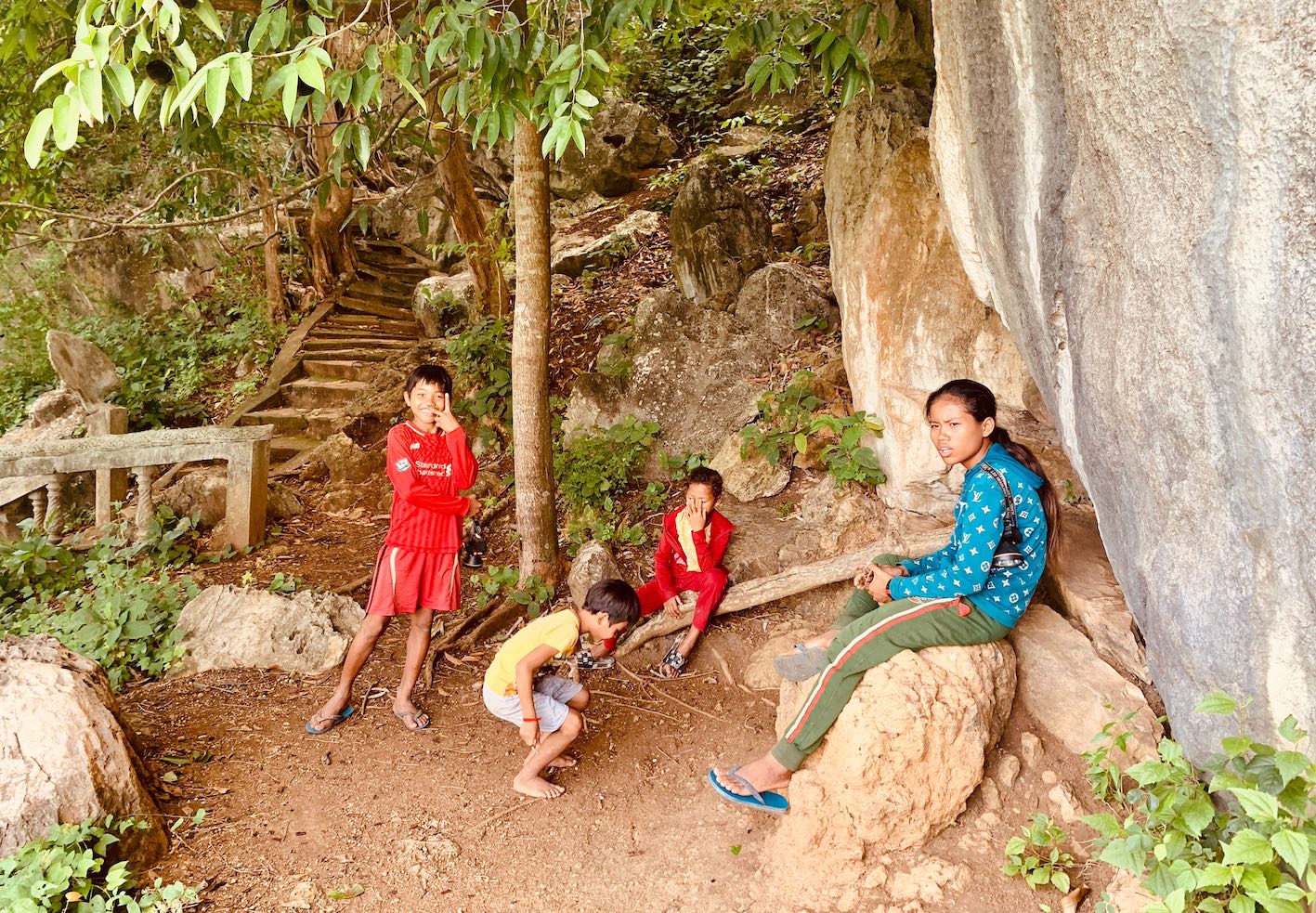 The guardians of Phnom Chhngok.

“This is cave temple!” cried their spokesman, a young boy dressed in a Liverpool football jersey and matching red shorts. “You pay this way” he called urgently, pointing us towards a middle aged man in a military uniform. Slouched nonchalantly over a plastic table, he accepted our two dollars and proceeded to roll a cigarette. 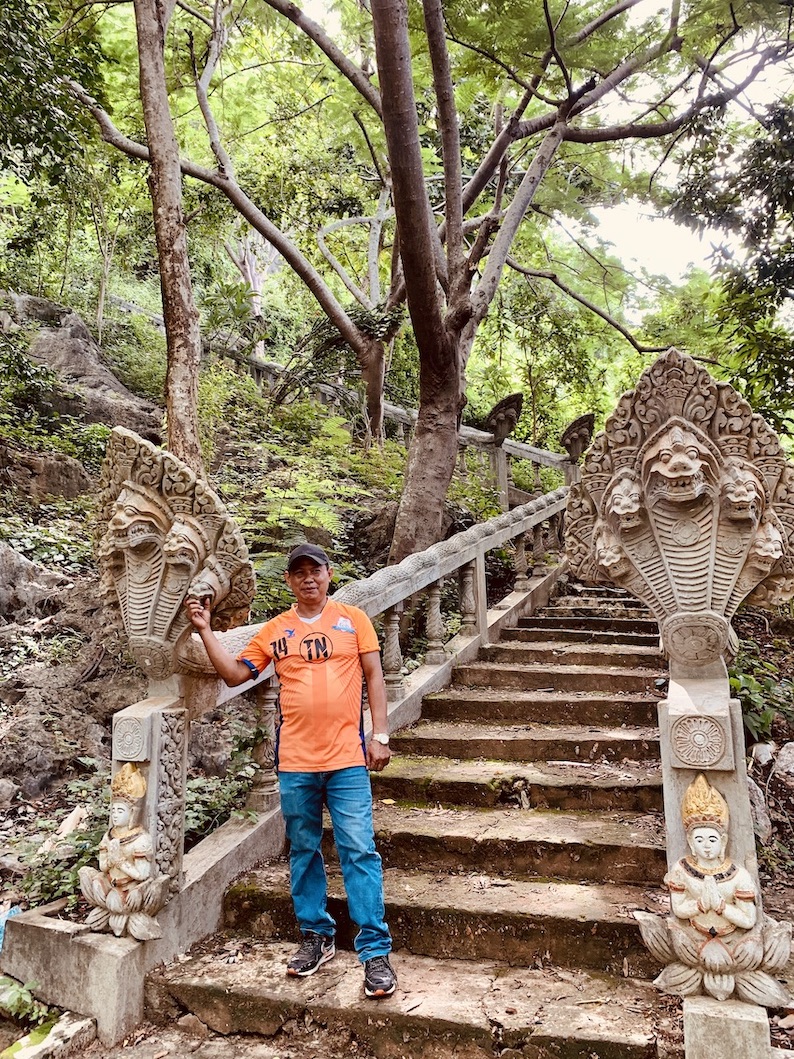 San at the foot of the temple staircase.

“Ok let’s go!” shrieked Liverpool as we set off up the 200-step temple staircase. There was no point in telling them that we didn’t require their services, they were clearly going to follow us around anyway.

“Temple very old!” came the enlightening commentary, as San let out a chuckle and a weary shake of the head. I guessed he’d seen this routine a hundred times. 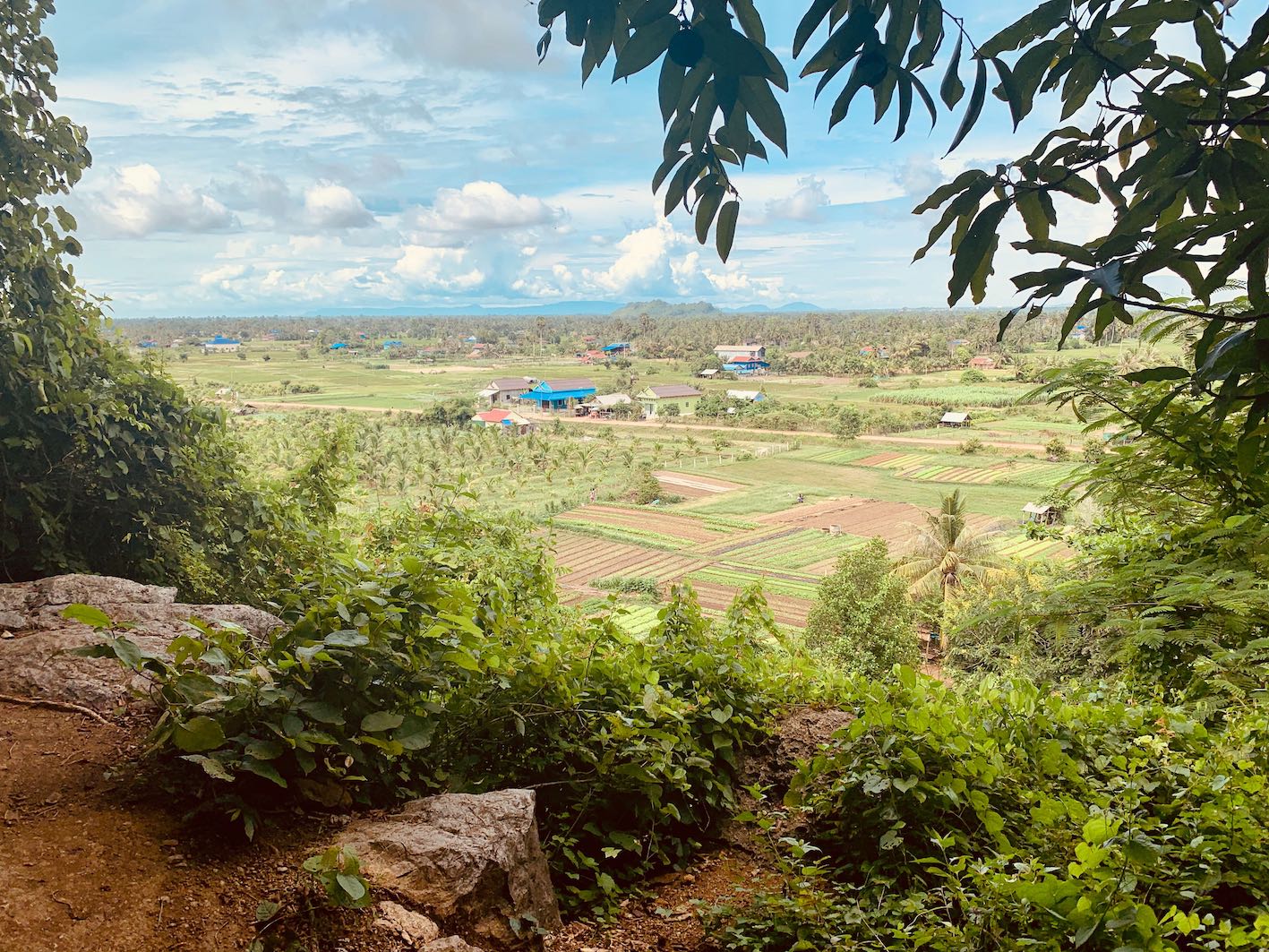 It only takes a few minutes to reach the cave entrance. Halfway up there’s a rocky clearing with gorgeous views out across the province. “Is beautiful” said the youngest boy, making no attempt to disguise his boredom as he swung restlessly from the branches of a nearby tree. 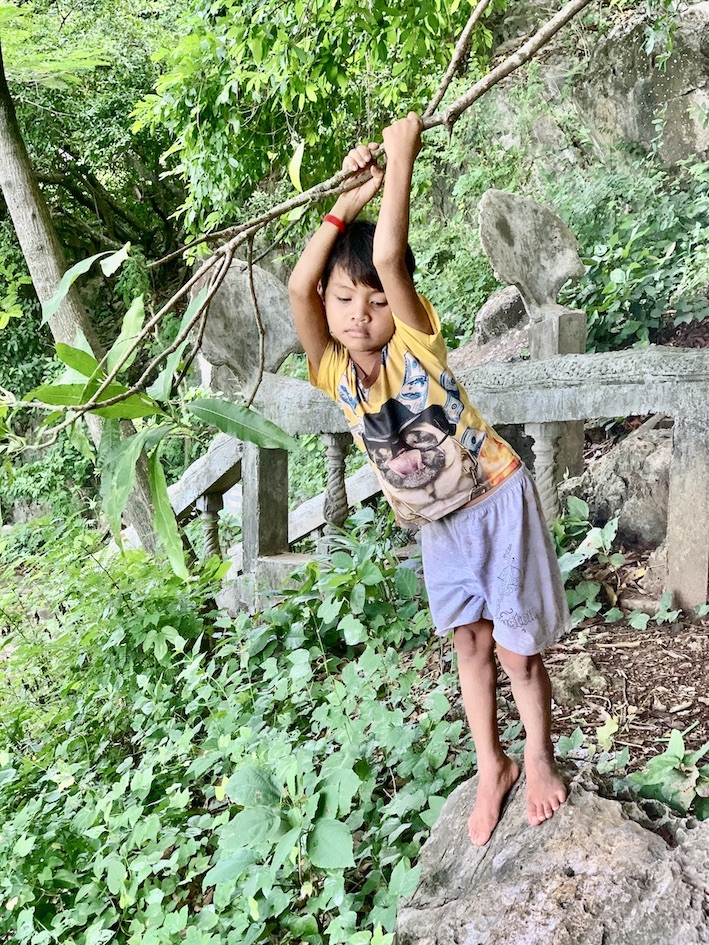 At the cave entrance a further set of stone stairs leads down to the temple. You certainly have to be careful as you descend, as the steps are slippery from the dripping cave roof. Moreover, there are fallen leaves and twigs, in addition to bits of discarded litter. The place is not very well cared for. 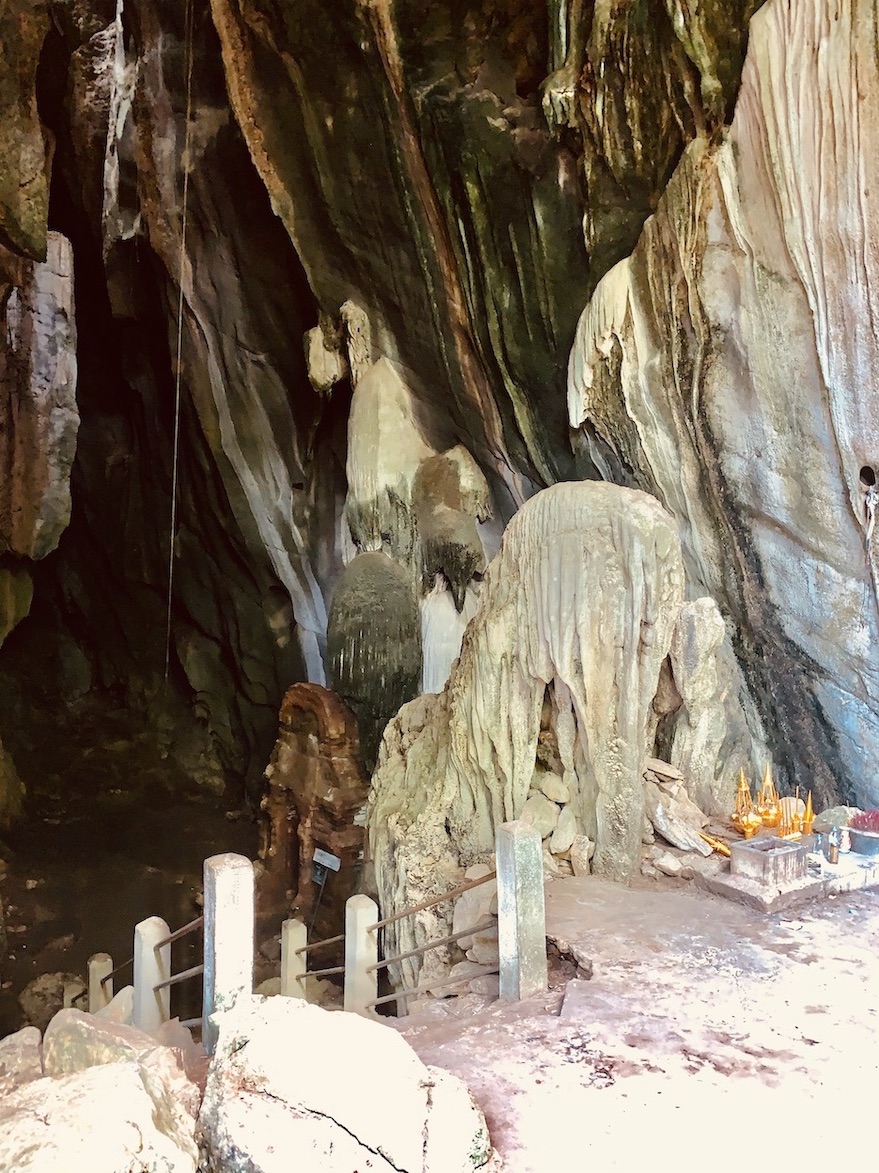 Historians don’t know all that much about Phnom Chhngok Cave Temple. Yes, it’s pre-Angkorian, but they have no idea which king ordered its construction. The temple itself is tiny, made of Funan red brick. 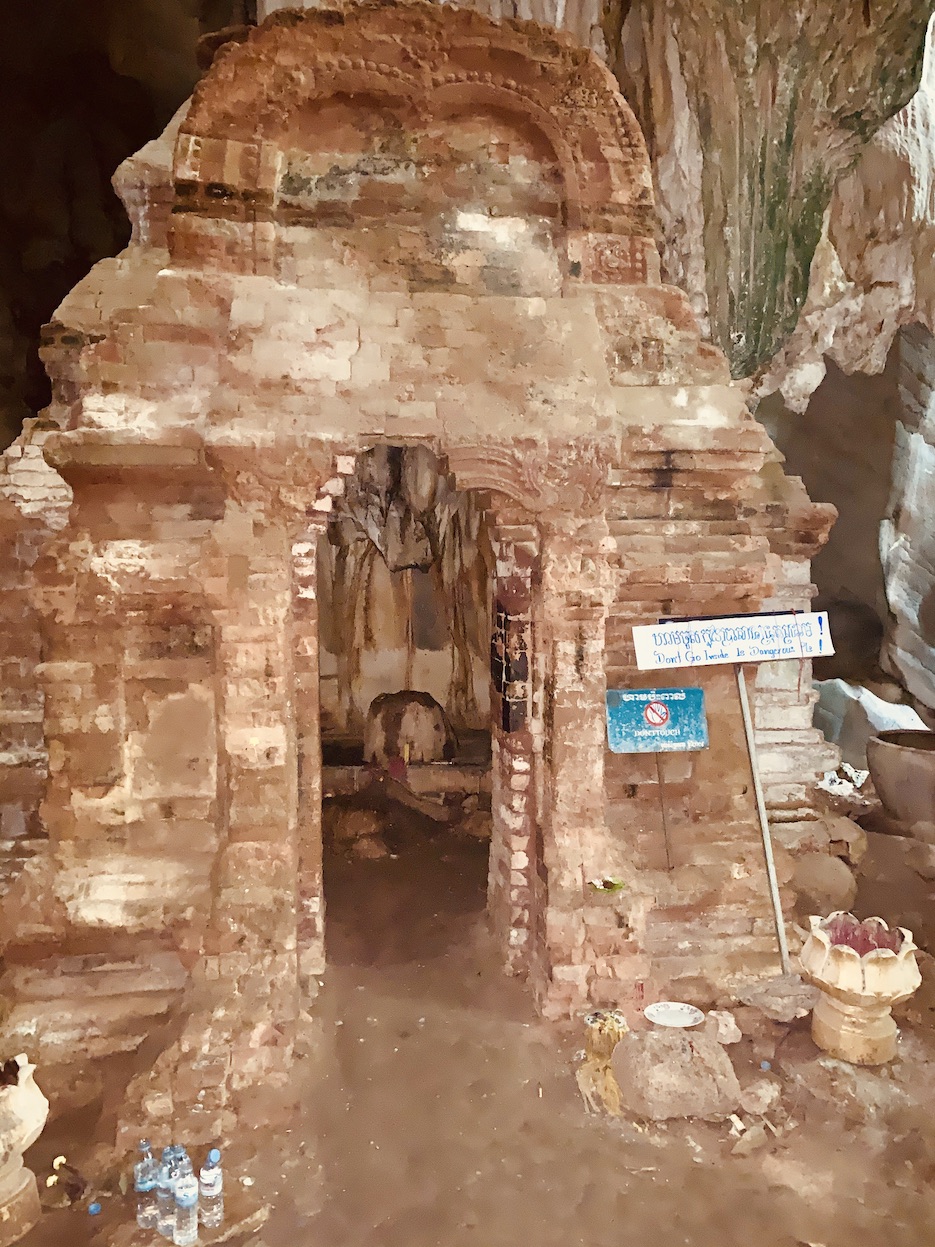 The presence of a linga rock tells us that the temple was dedicated to the Hindu god Shiva. This sacred, phallic symbol draws in plenty of Khmer couples who believe touching it will help them get pregnant. Furthermore, experts think the temple’s location within a cave represents a baby in the womb. 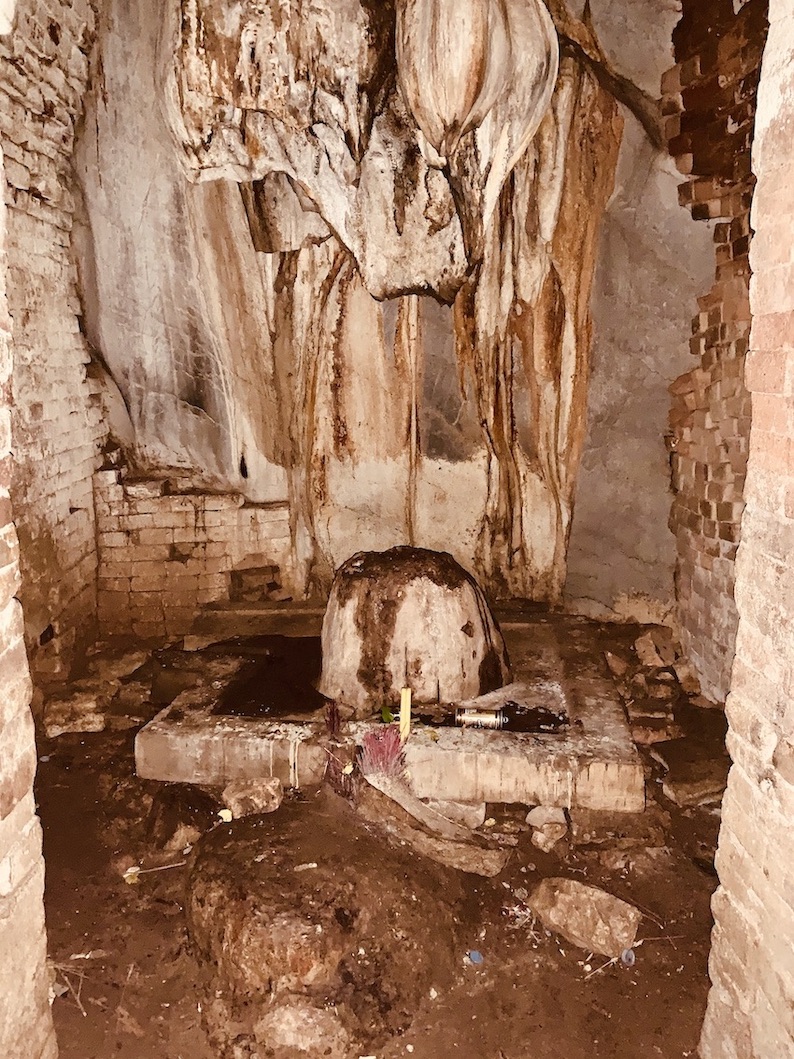 The temple is also famed for its animal-shaped rock formations. Liverpool and friends were keen to show us the giant elephant, located to the right side of the temple. Initially, I couldn’t see it. But then it began to take form, as I picked out the cracks in the rock that serve as its eye and half open mouth. 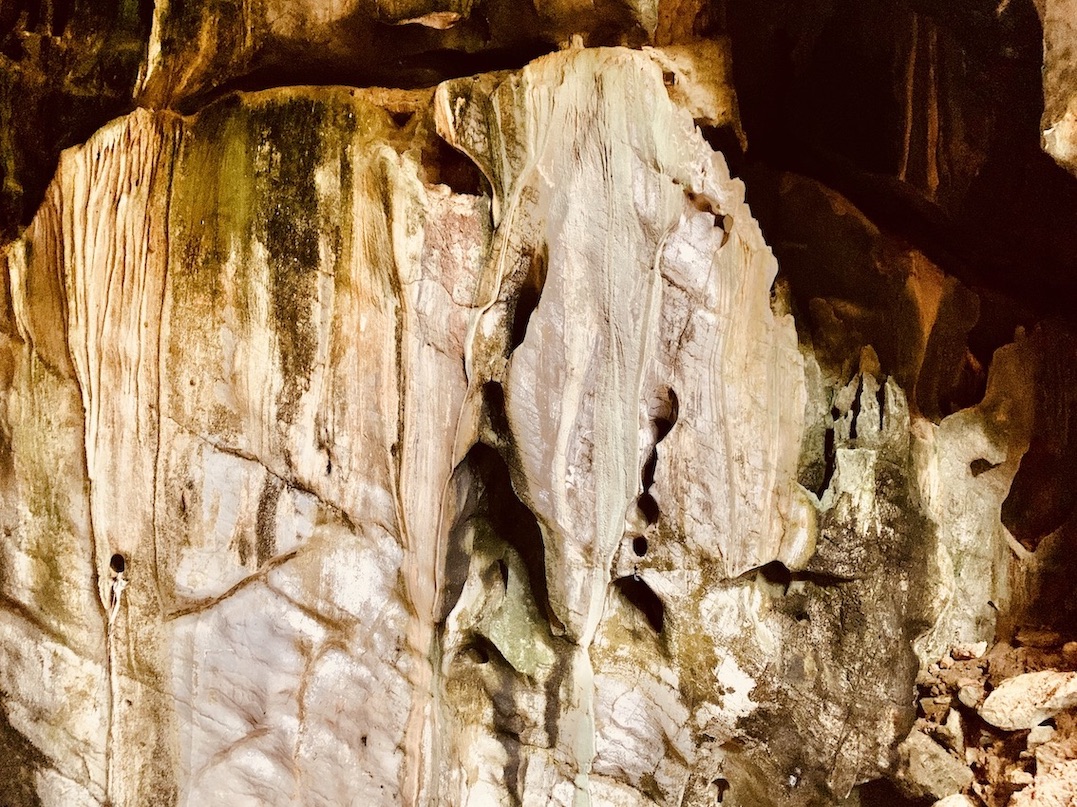 Another formation resembles an old turtle. Look to the far right of the below photo and that’s it’s head and eye, partially obscured by rambling twigs. 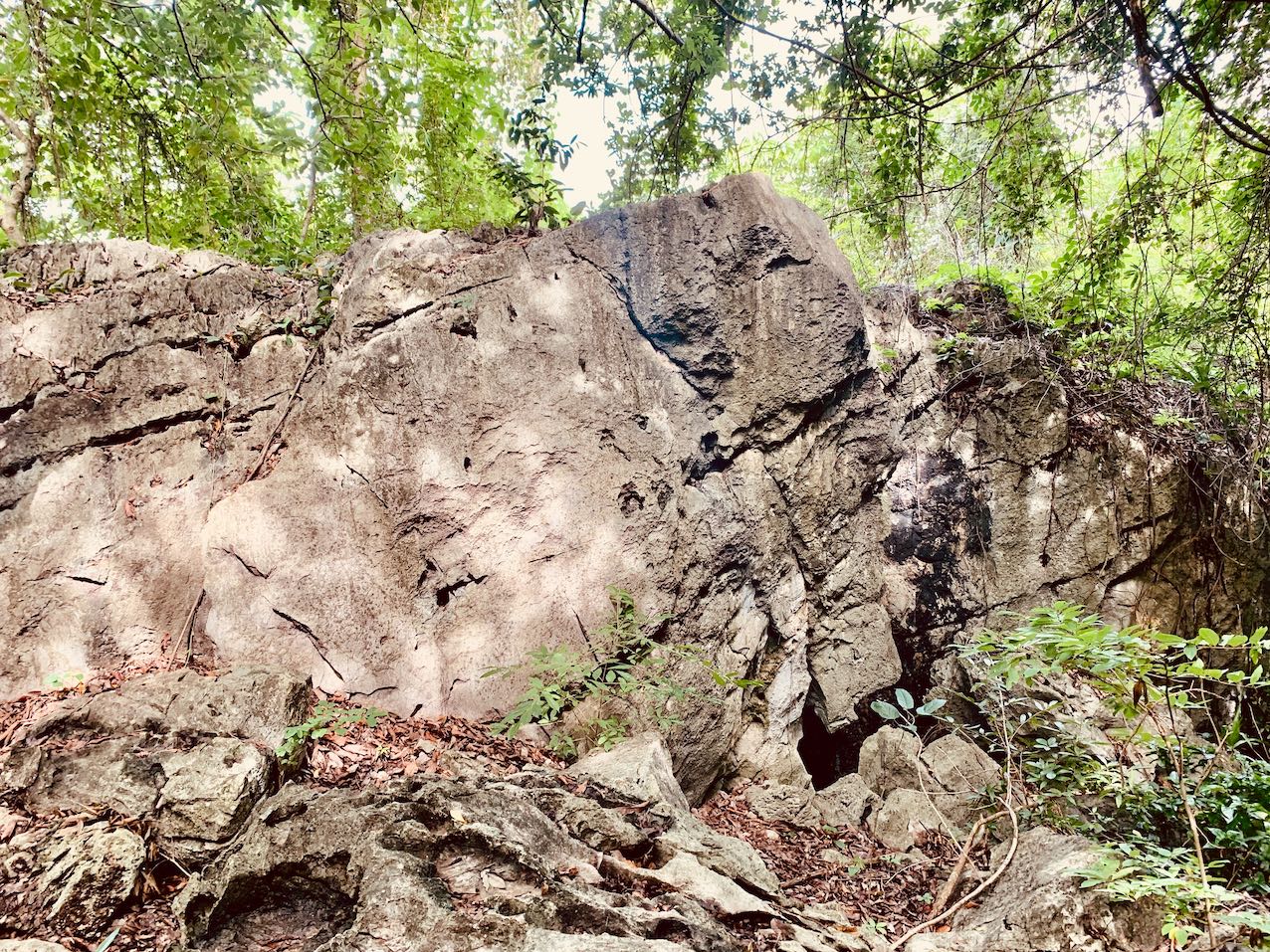 When it was time to go, the kids showed us an adventurous tunnel route that leads back down to ground level. Liverpool had even brought a torch and offered to lead the way. But the tunnel looked worryingly narrow, damp and grim, so we passed. 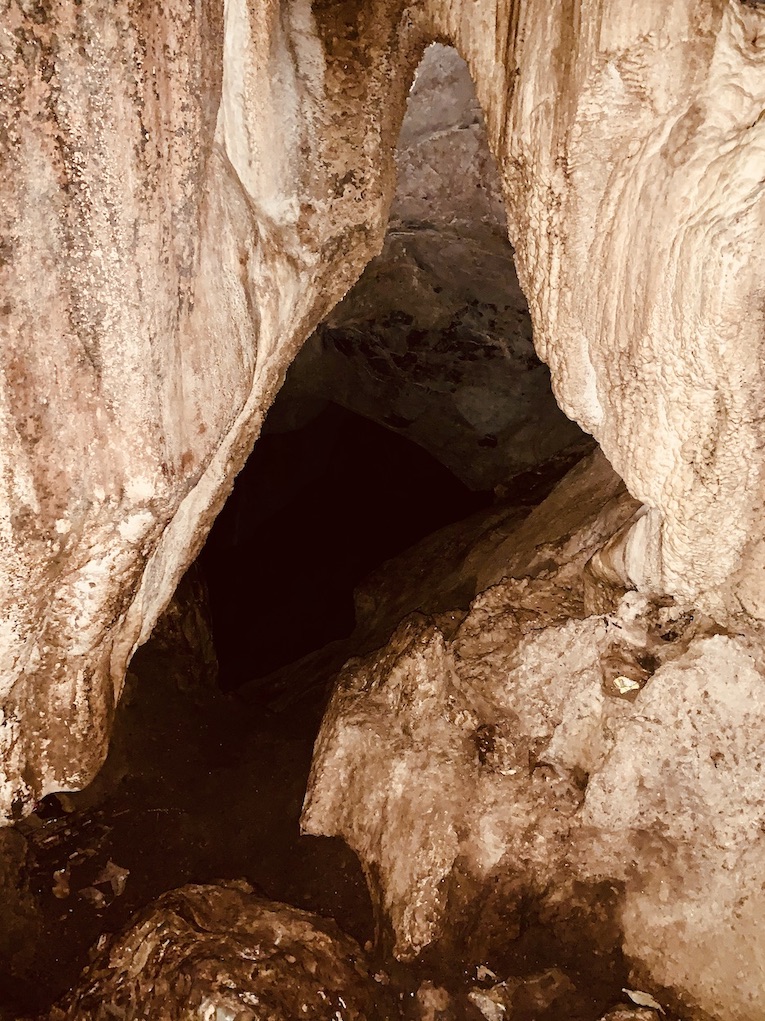 Phnom Chhngok Cave Temple is a low key Kampot sight, but well worth a stop in connection with other spots peppered around the Kampot countryside. Entry is cheap, the walk up is short but invigorating and the rock formations add a bit of quirk. What’s more, where else can you get your own team of bodyguards? 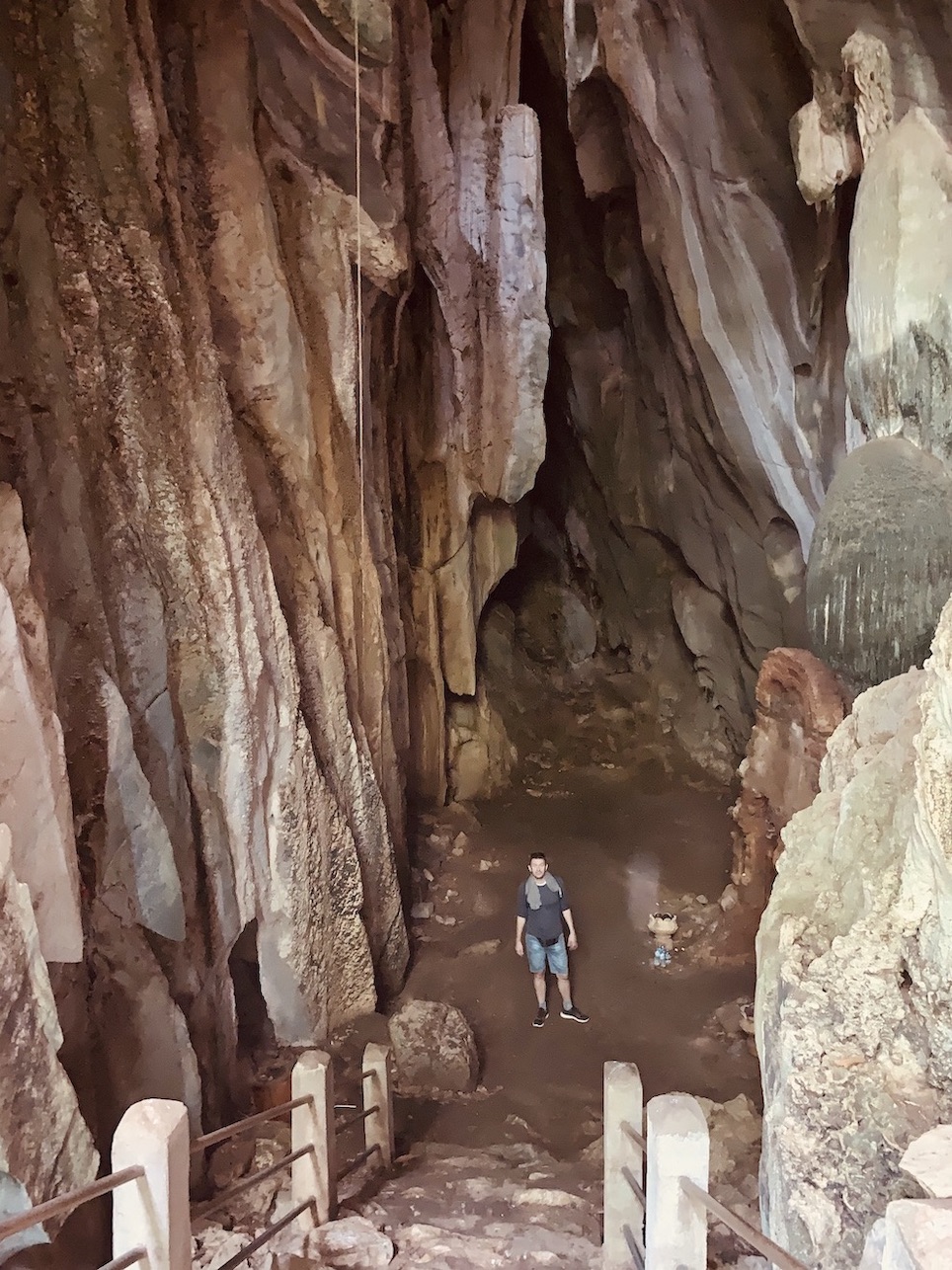