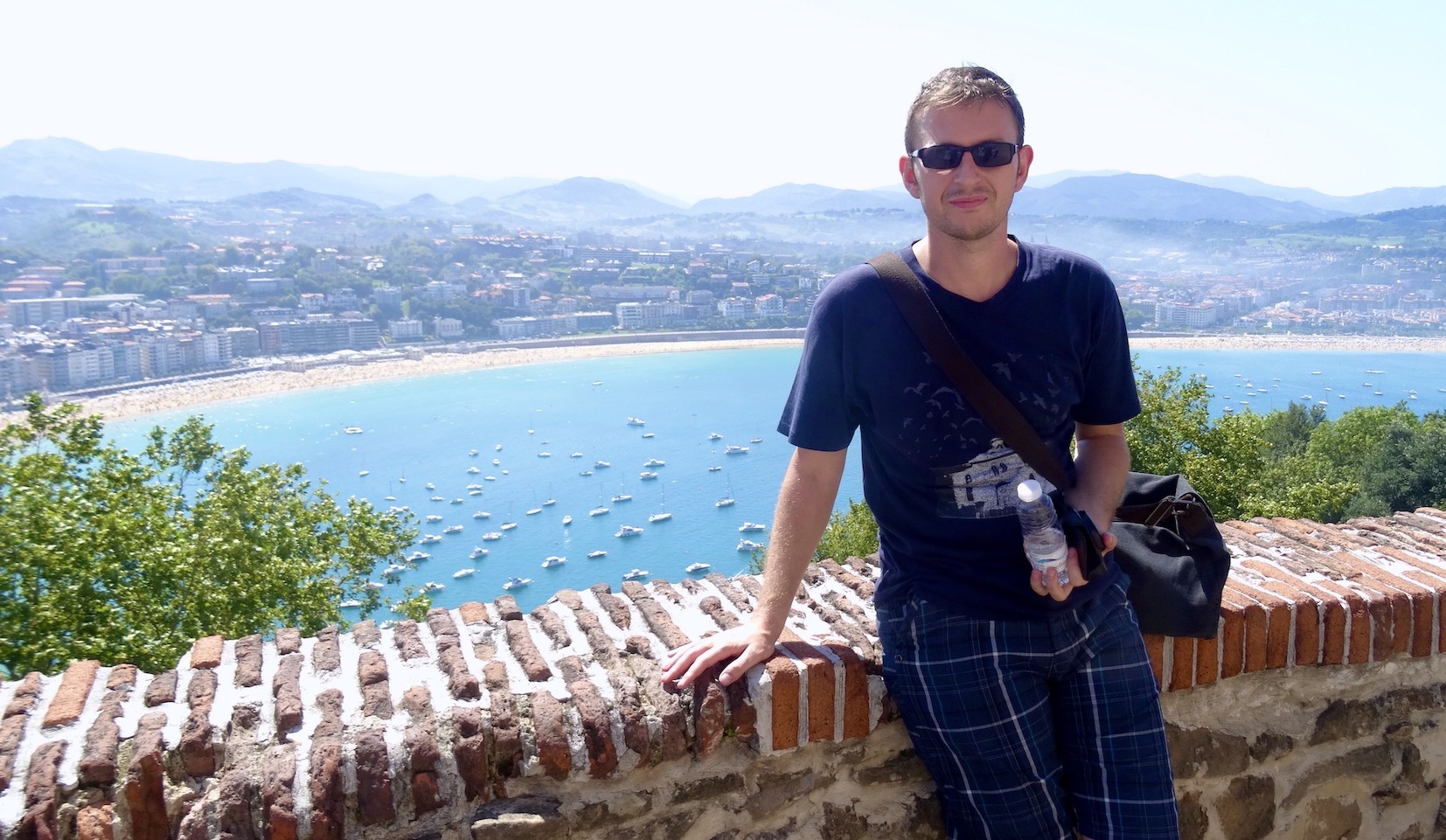 August 2015. Everybody and their dogs had told me how I’d be mad to leave San Sebastian out of my trip across Northern Spain. After all, this was supposed to be one of the world’s most stunning coastal cities. Known in its native Basque language as Donostia, this petite city also has a reputation as one of Spain’s finest foodie havens.

Naturally, I found myself tempted. I mean, who doesn’t want captivating vistas and world class cuisine? The thing is, I also knew that San Sebastian is a veritable epicentre of unbridled tourism. Especially at the height of the Spanish summer, right at the precise moment I was passing through the region. With no idea if I’d ever be back to Northern Spain, I ultimately decided I had to go for it. 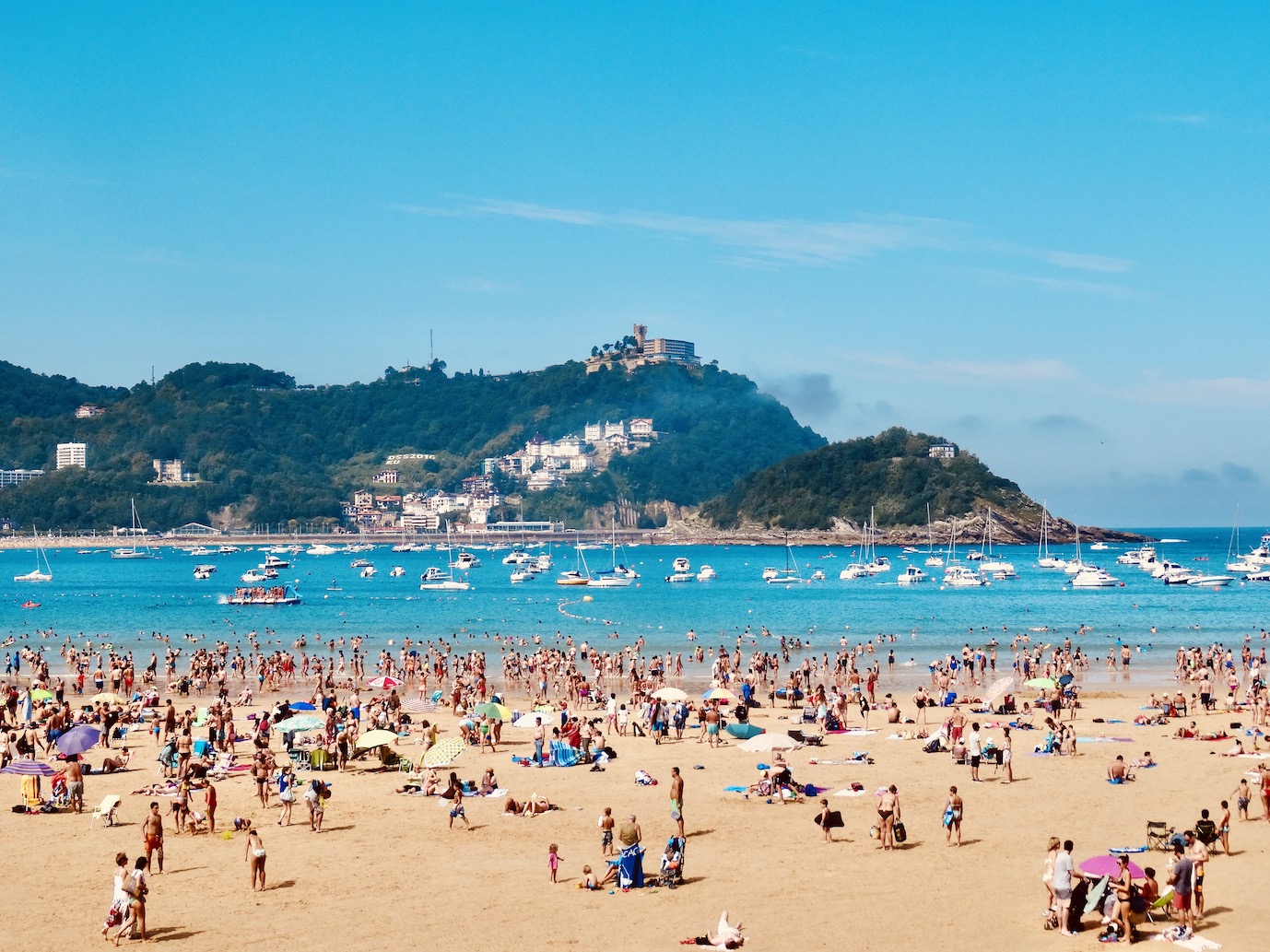 Unsure as to just how manic it would be, and indeed how long I could put up with the crowds, I decided to do San Sebastián as a brief overnight stay. I figured I’d come and get a taste for the place, before moving onto the altogether more leisurely city of Pamplona.

On arrival, well aware of my limited timeframe, I made straight for the city’s world famous beach, Playa de la Concha. My first thought was, damn it’s busy. But of course I could also see why it’s so highly rated. 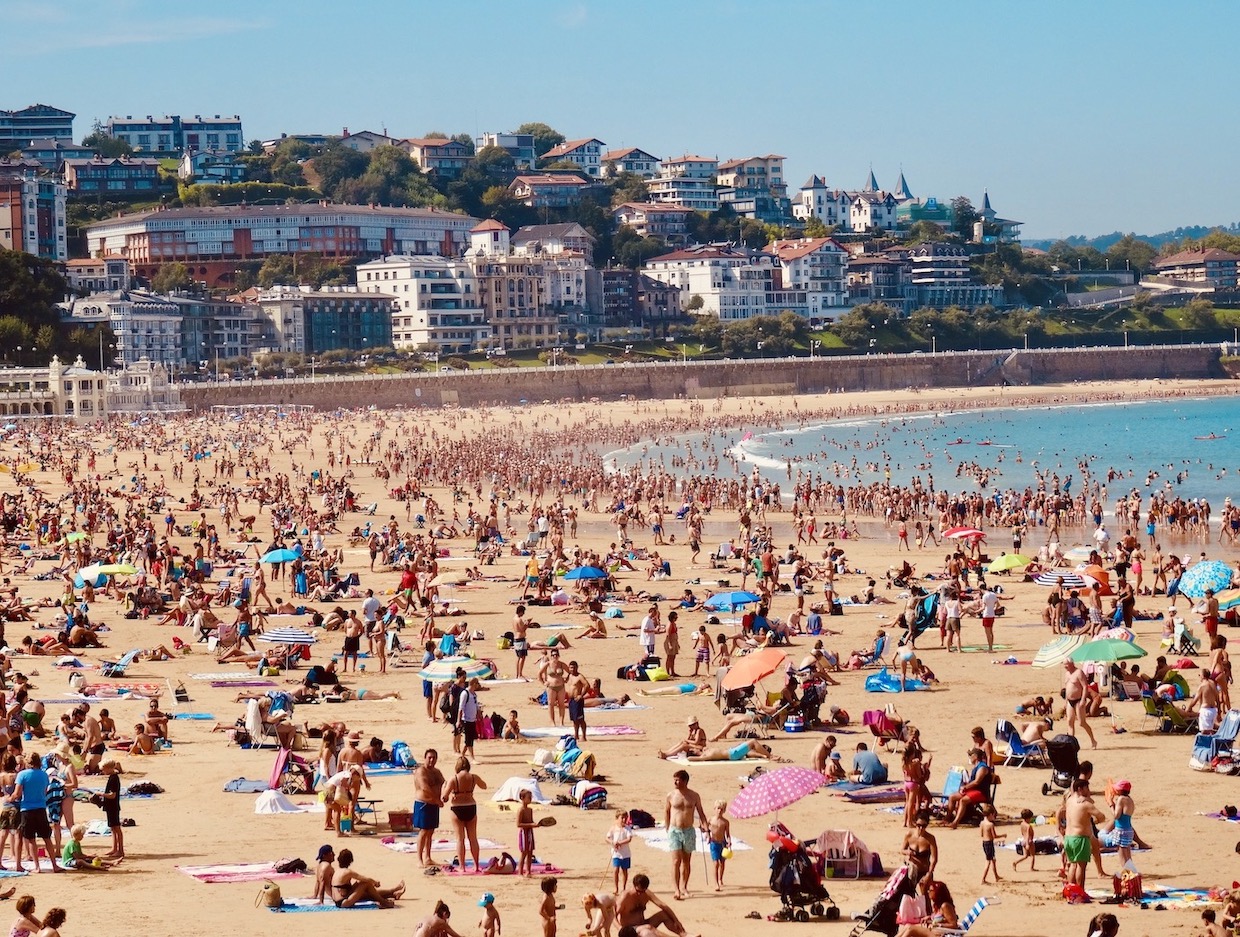 Shaped like a shell (concha in Spanish), its golden sands curve seductively around the bay, with clear, turquoise water. No wonder it picked up the award for Europe’s Best Beach at the 2018 Traveller’s Choice Awards.

Nevertheless, I found myself struggling somewhat with the sheer number of bodies around me. Not to mention how unbelievable noisy the whole place was. Indeed simply taking a walk down the beach proved to be quite the challenge. 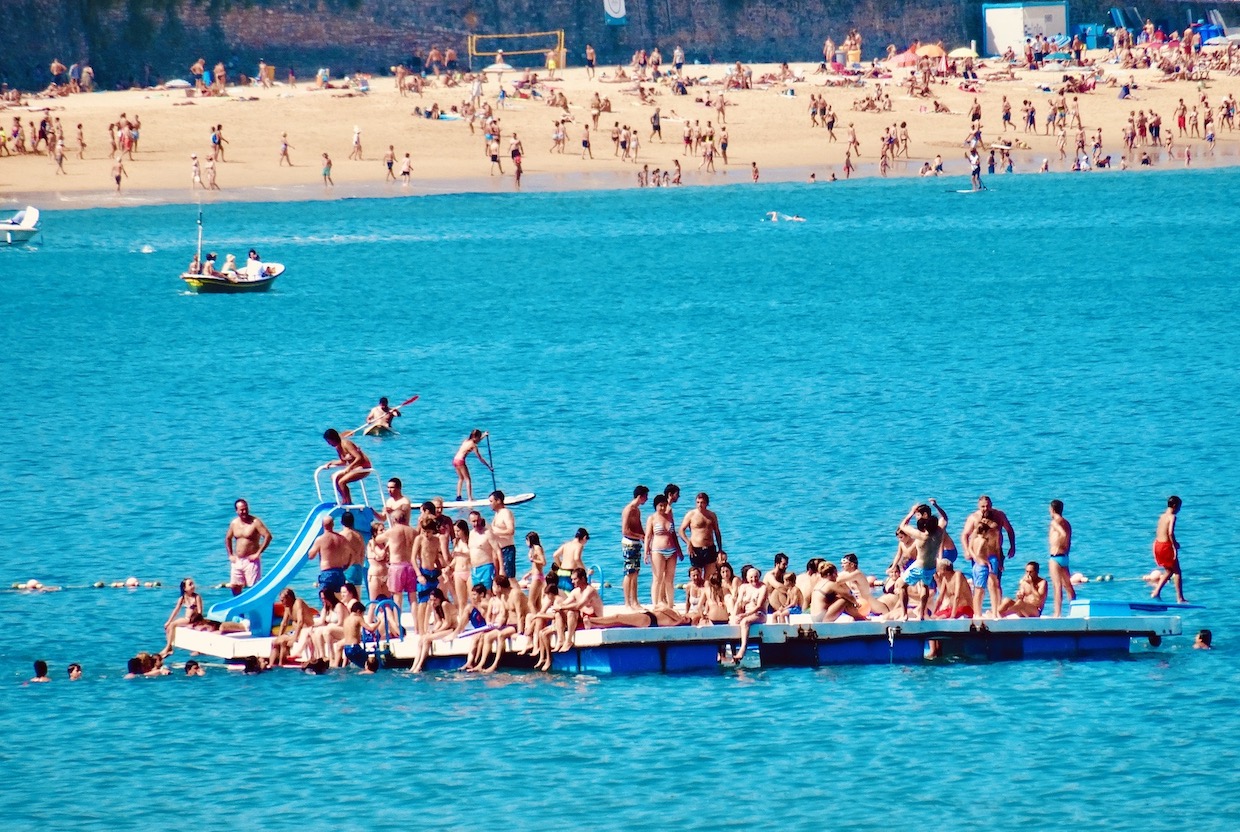 Gazing out across the bay, I spied several party boats, with a truly ridiculous amount of people squeezed onboard. Was this any better than the beach? I wasn’t convinced. 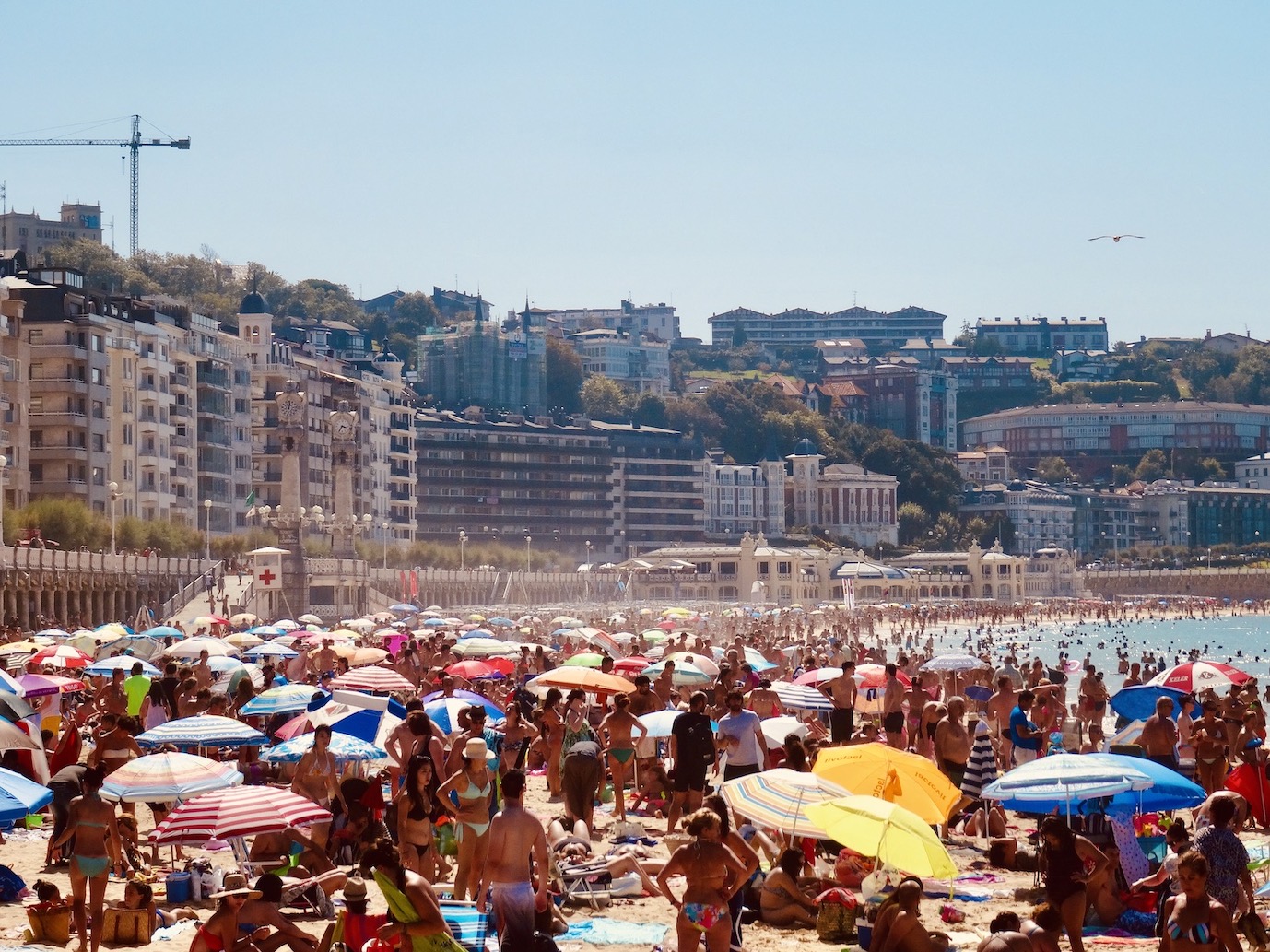 I spent about an hour strolling along La Concha Beach. As I walked, it got busier… and busier…. and busier. In fact, I’d say San Sebastian is right up there alongside Qingdao in China as the most chaotic beach I’ve ever experienced.

Moreover, It was hard to imagine a fascinating piece of Second World War history that took place on these sands back in May of 1945. It was here that the Belgian politician and prominent Nazi collaborator Léon Degrelle crash landed his plane while fleeing from Allied forces. 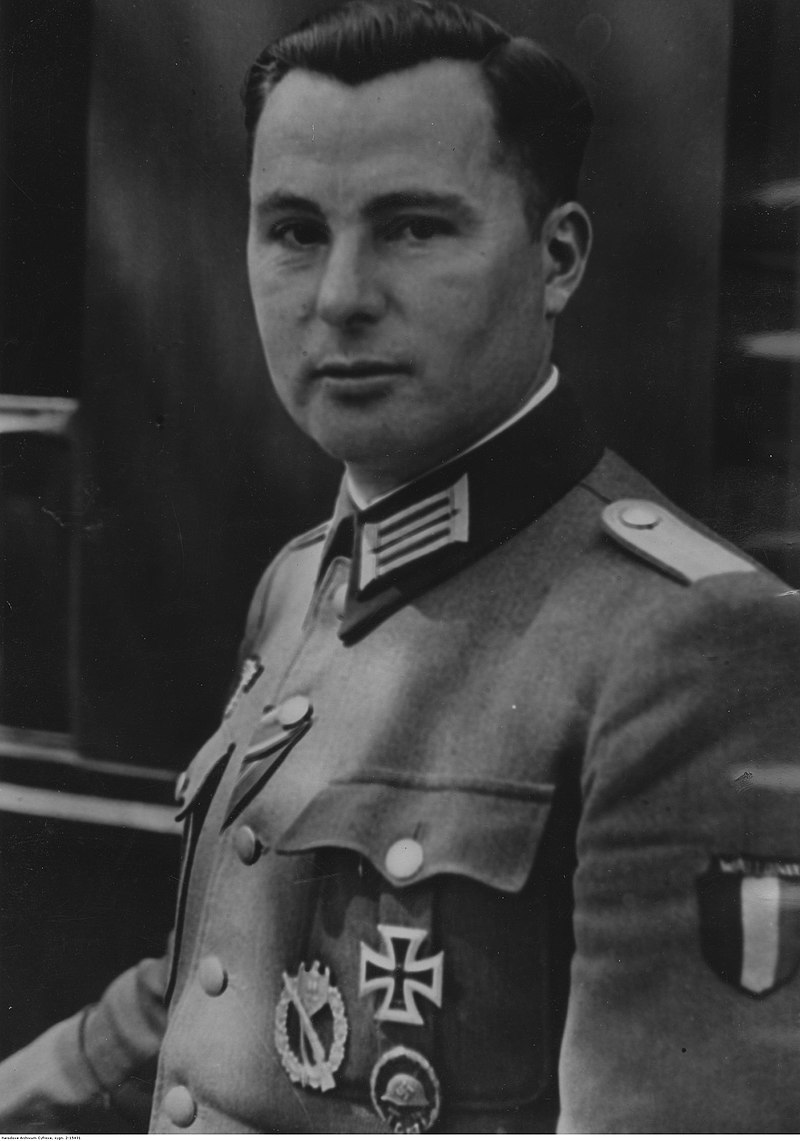 Degrelle subsequently spent the rest of his life in exile in Spain. Incredibly, he was never brought to trial and died in his adopted city of Malaga in 1994 aged 87.

Keen to escape the ever-increasing masses, I decided to head for the green walking trails of Mount Urgull, home to a mediaeval fortress, Castillo de La Mota. Instinctively, I felt that not many people would be up for the hike on a blistering afternoon such as this. 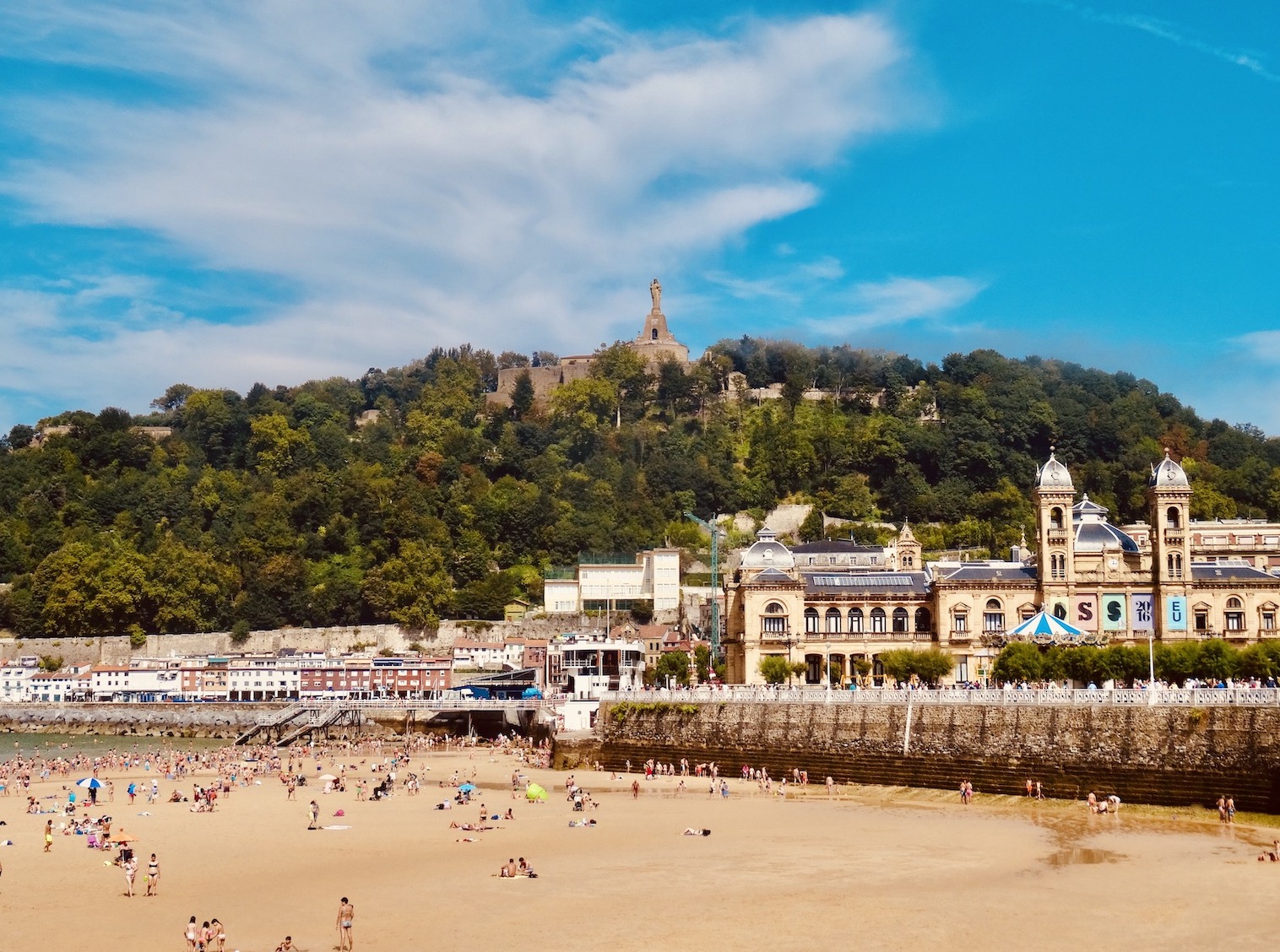 Much to my delight, my hunch proved spot on. Finally, I felt like I had arrived in San Sebastian as I made my way up Mount Urgull’s largely deserted walking trails. This 123 metre hill became a key defence point for the city back in the 12th century. And today you can still see what an incredible vantage point it had and has over the urban sprawl. 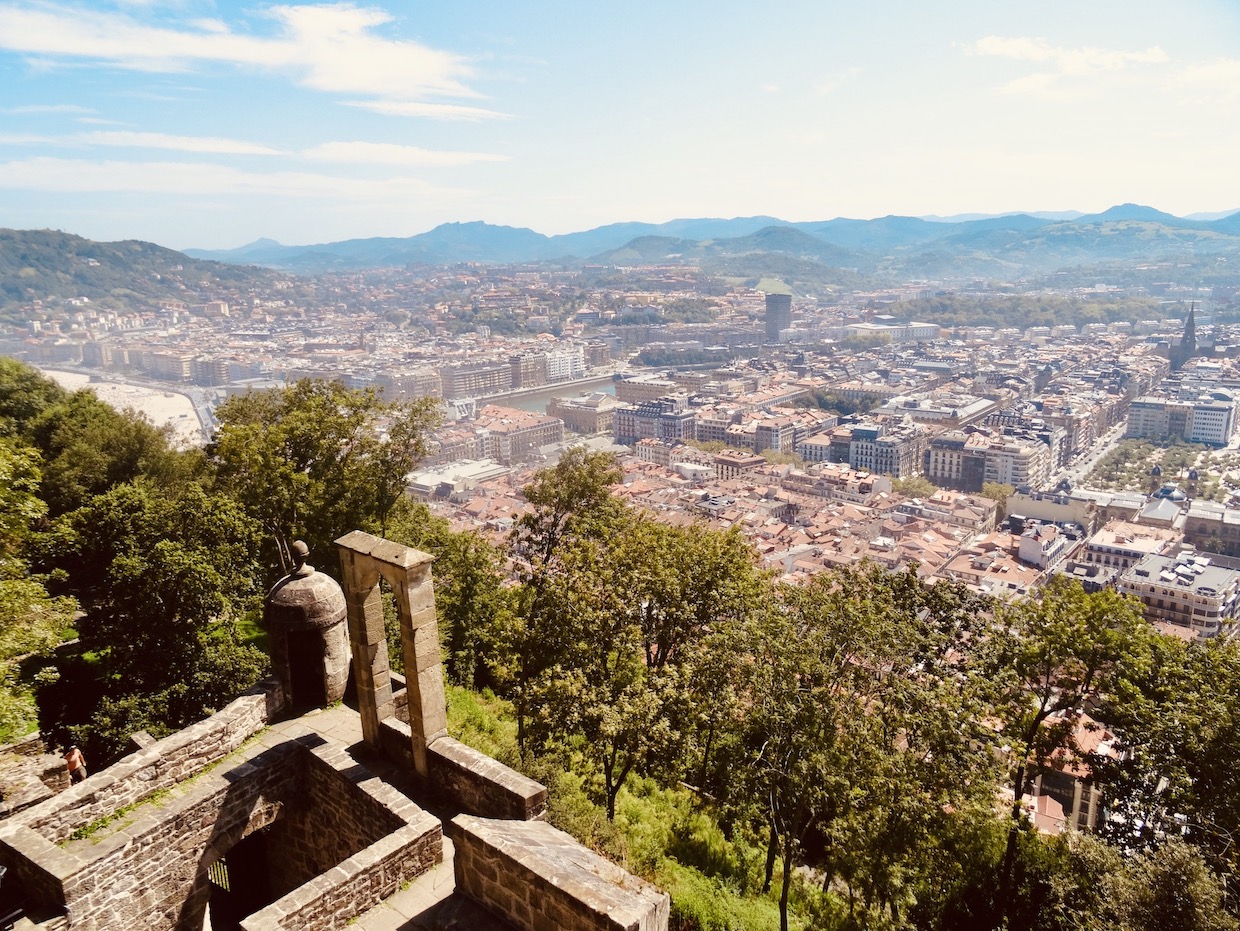 The well-preserved remains of La Mota Castle, dating back to the 12th century, lie across the uppermost paths at the top of the hill. King Sancho VII of Navarre ordered its construction in 1194, though it wasn’t until 1476 that the fortress had its first big test. 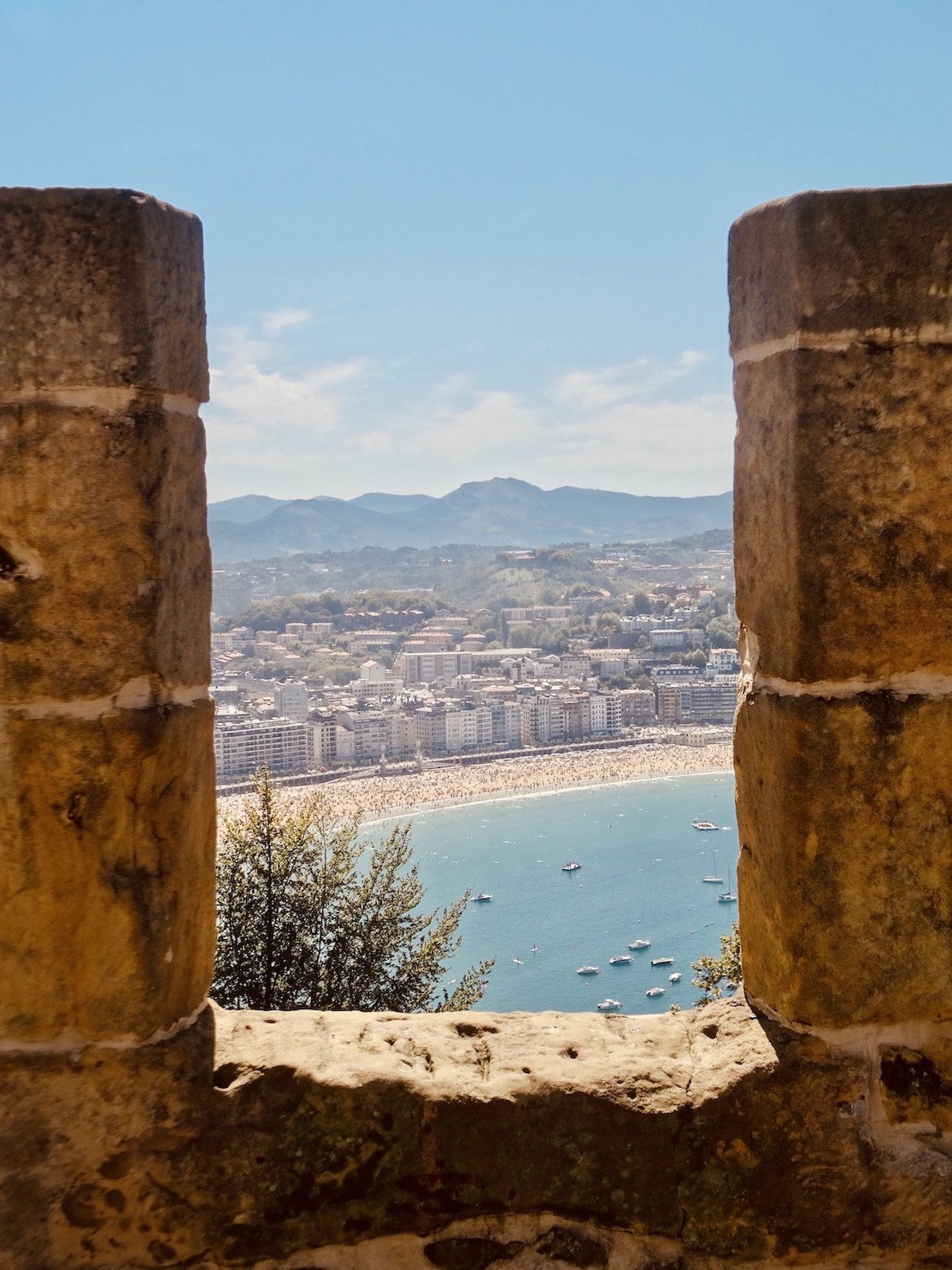 When Franco-Portuguese troops besieged San Sebastian that year, the fortress played a key role in fending off the attack, in addition to sheltering thousands of city inhabitants. Following the assault, the Catholic Kings further strengthened the castle. 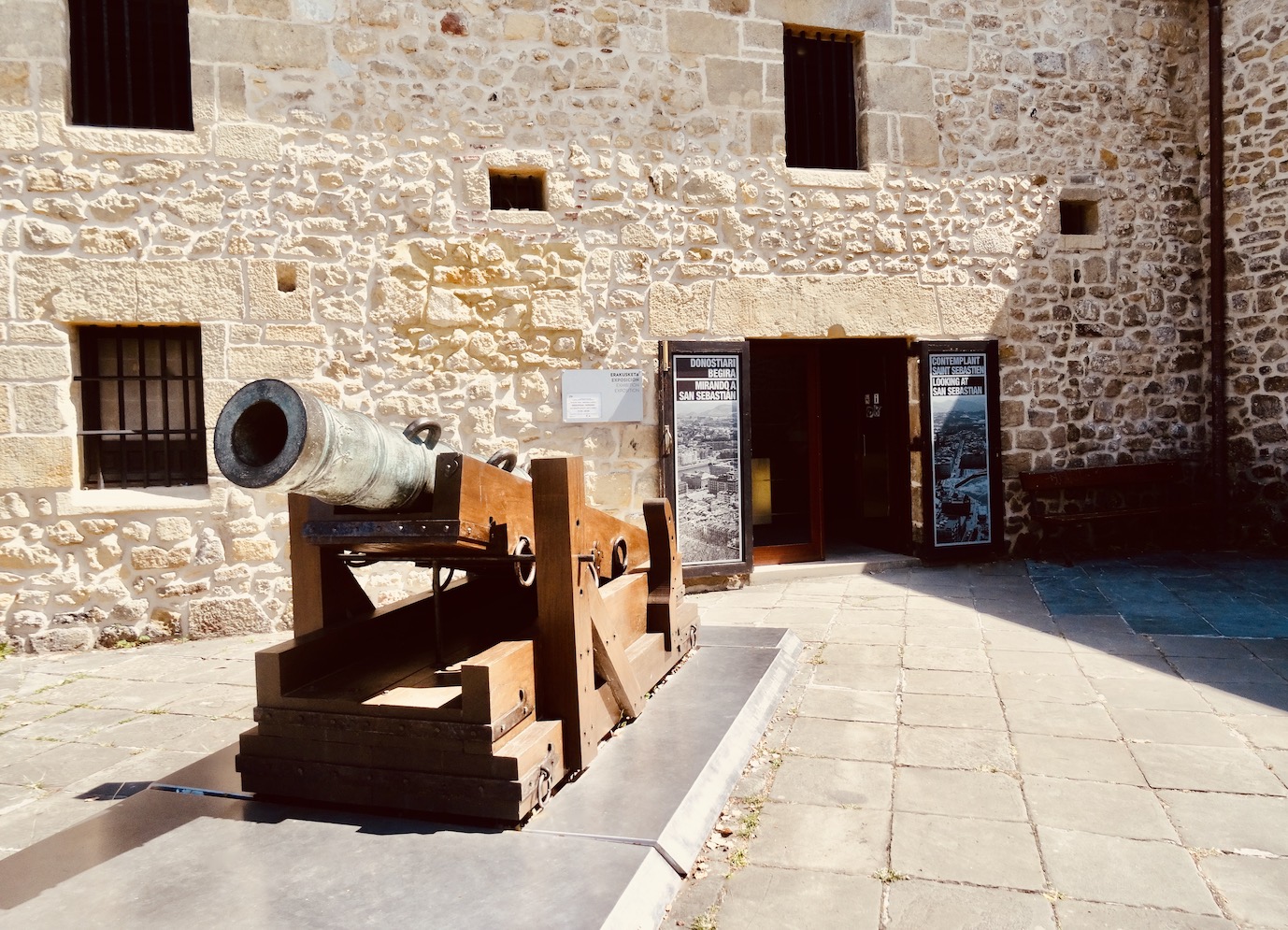 The museum at La Mota Castle.

The fortress also stood impregnable against numerous sieges throughout The Spanish War of Independence and the Carlist Wars. Eventually, it fell into disuse in the early 20th century before reopening as a cultural park in the 1960s. Today you can dive into its history in this little museum. 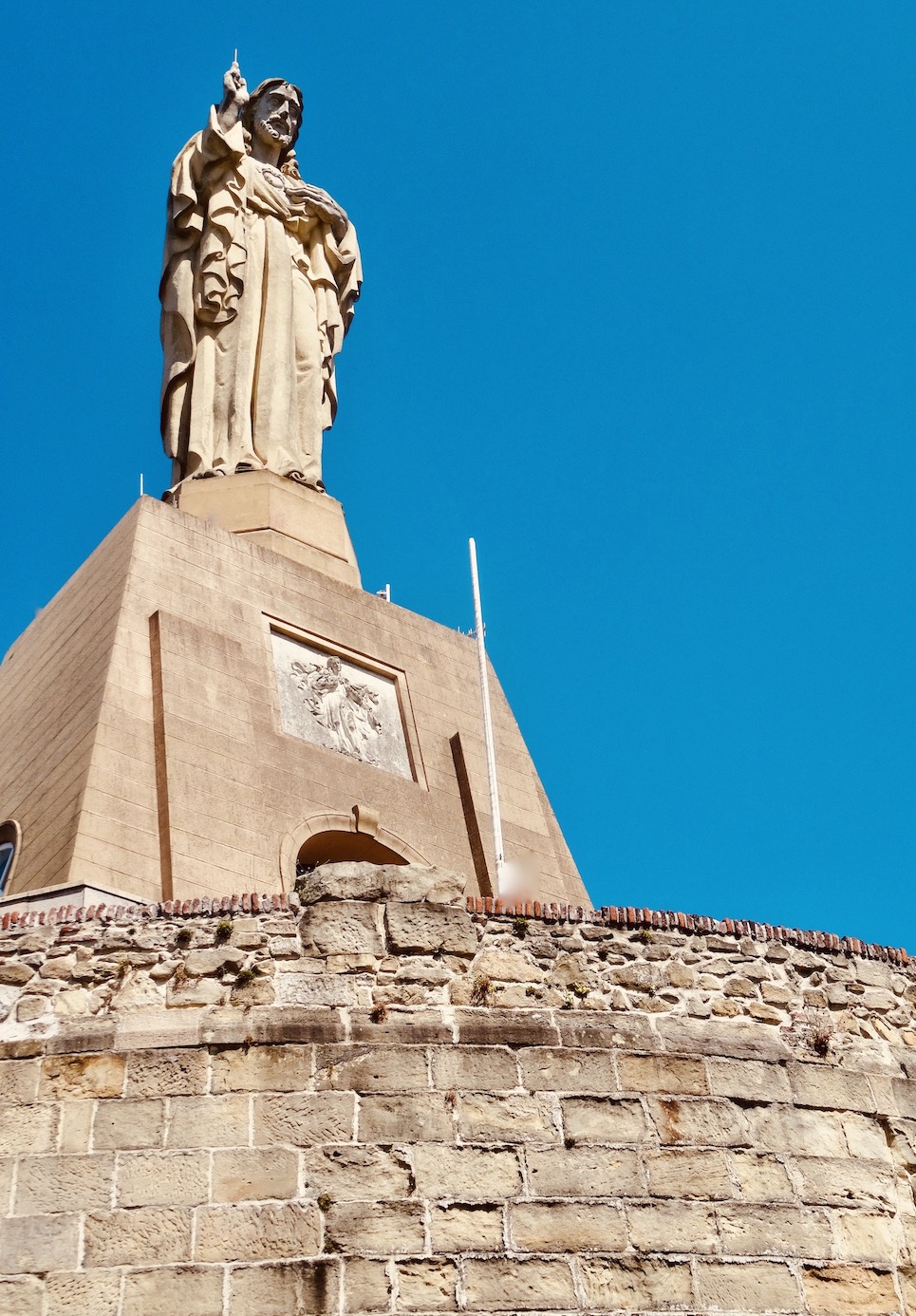 While up on Mount Urgull, it’s also cool to see the twelve metre Jesus Christ statue up close. Visible from all across the city, it was added in the 1950s as a blessing to the people of San Sebastian.

Known locally as Sagrado Corazón (Sacred Heart of Jesus), the piece is predominantly concrete, coated in sandstone. Although the chest, hands and “other noble parts” do feature marble fragments. 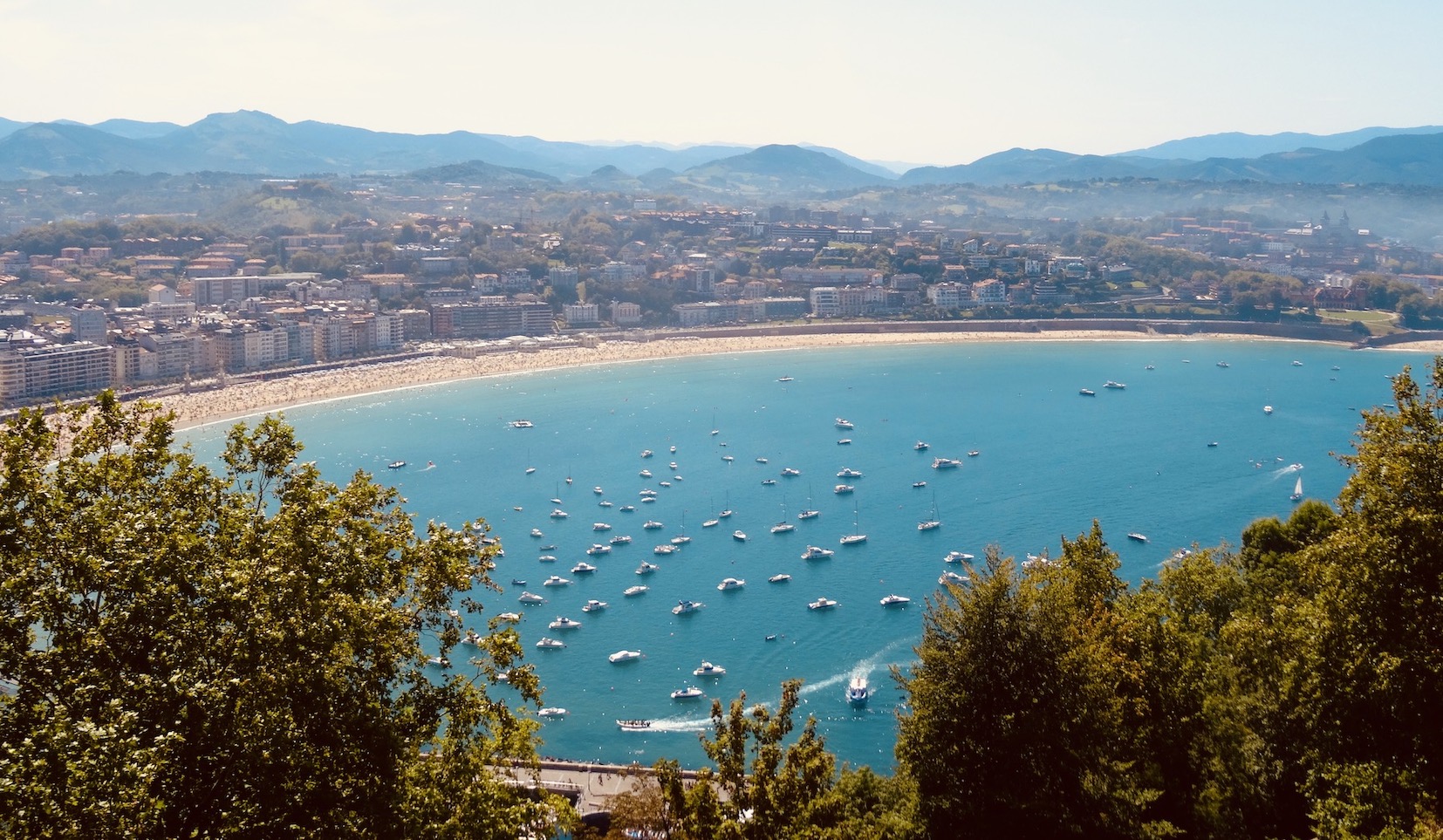 Before heading back down, I spent a few minutes soaking up the views over Concha Bay. And marvelling over how all those people on the beach had been reduced to little more than scurrying insects. 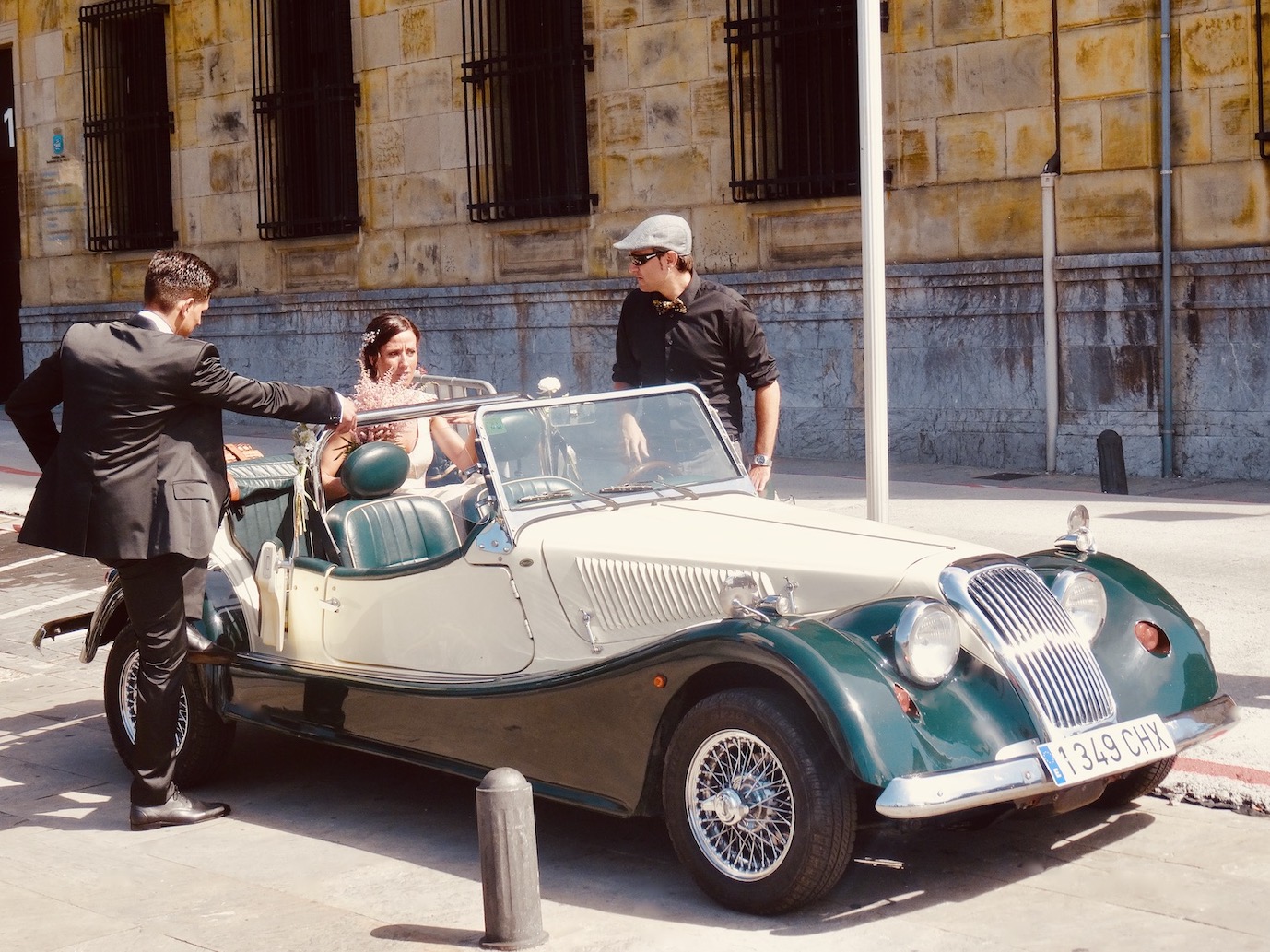 Back down in the city centre, I dove into the historical quarter to search for some of the city’s world famous food. It was a return to chaos, with kids getting under my feet and a large bachelor party jeering drunkenly at passers by. There was also a sizeable wedding group clapping a bride and groom into a charming, antique car.

It was with some relief that I escaped all the hubbub by ducking into Bar Aralar. This is one of hundreds of tapas bars in the old town. Except it’s not called tapas in The Basque Country, but rather pincho, pintxo or pinchu. 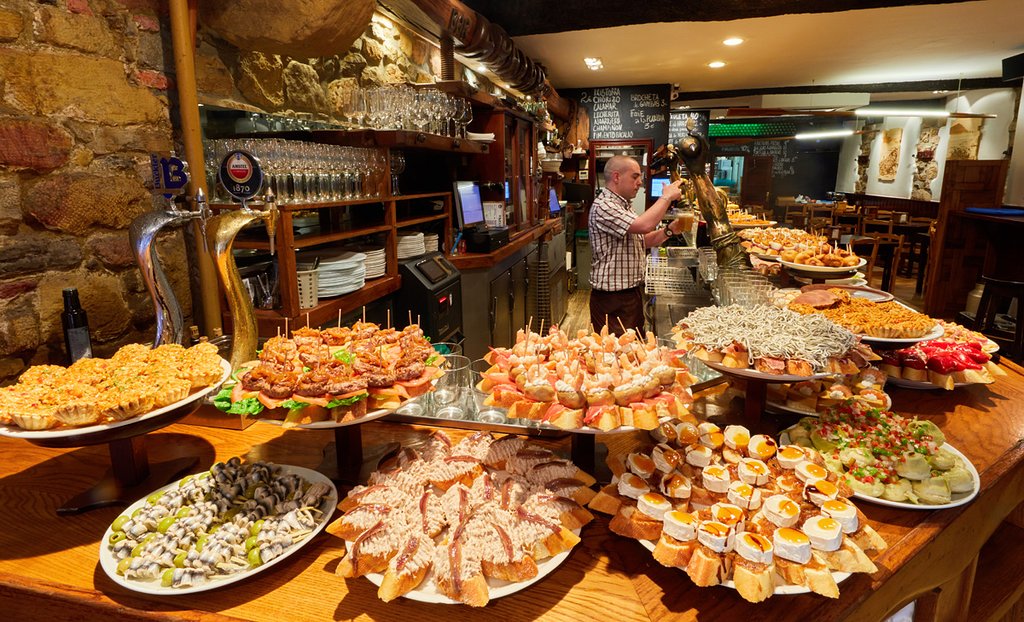 Aralar’s delightful bites lay stacked across the giant bar. From the moment I walked in I felt my eyes bulging as I took in the culinary landscape. Within moments I was filling my plate. First, some chorizo on slices of oil-drizzled baguette and a couple of tuna-stuffed red peppers. Then beer battered beef balls and smoked salmon on toast. 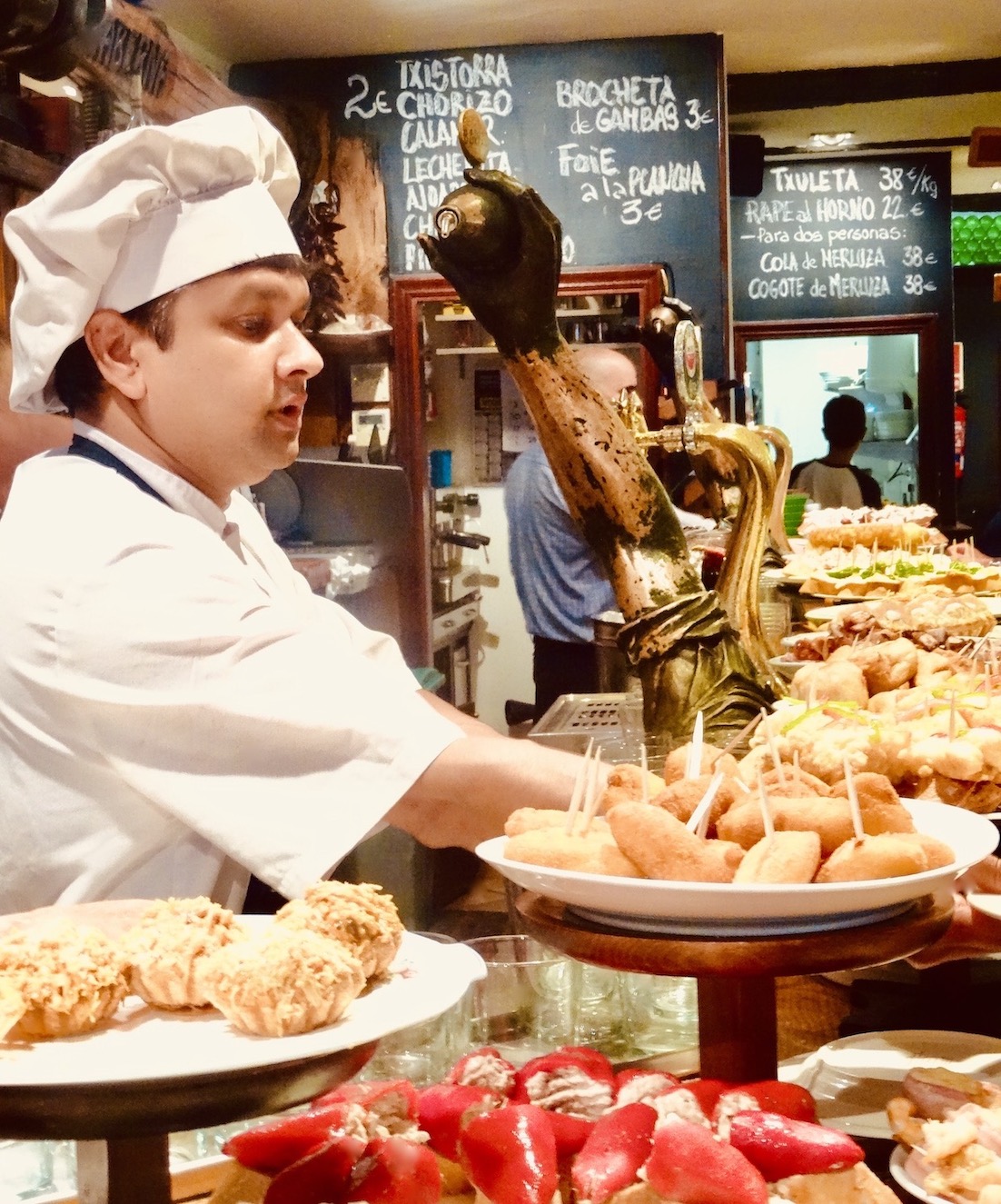 I remember the staff being a crazy bunch. They sang as they served, joking among themselves and flitting between numerous languages depending on the customer. Every now and then one of the chefs, dressed in all whites and a somewhat comical hat, would appear from the kitchen to add more trays to the bar. 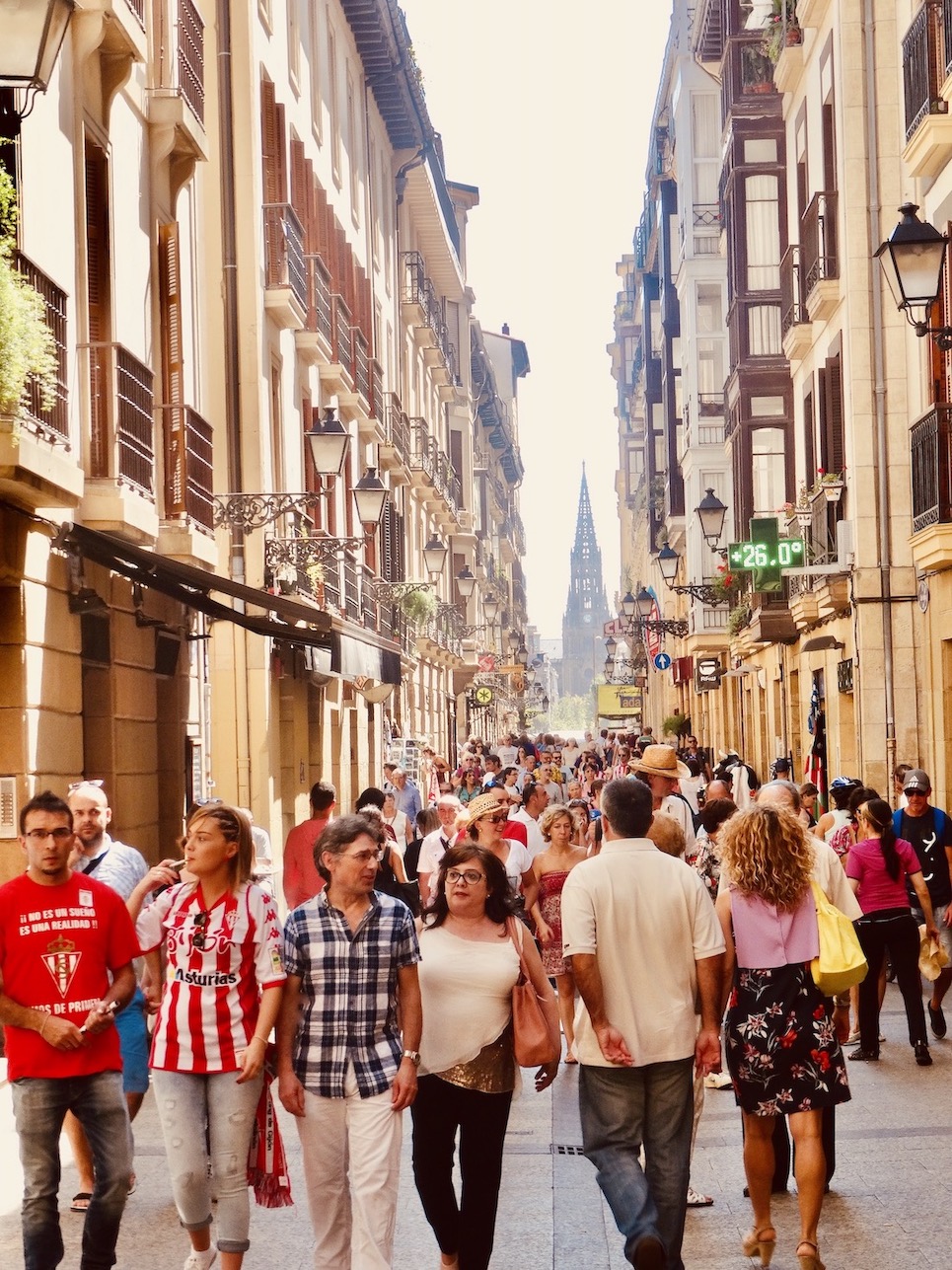 Back outside I soon turned onto Calle Mayor, an exceptionally handsome pedestrian street home to traditional storefronts and eighteenth century apartment blocks with overhanging terraces, potted plants and iron railings.

Unfortunately, I had to share the narrow street with half of Spain. Weaving between the bodies, I pushed on towards the almost mystical outline of San Sebastián Cathedral in the distance. 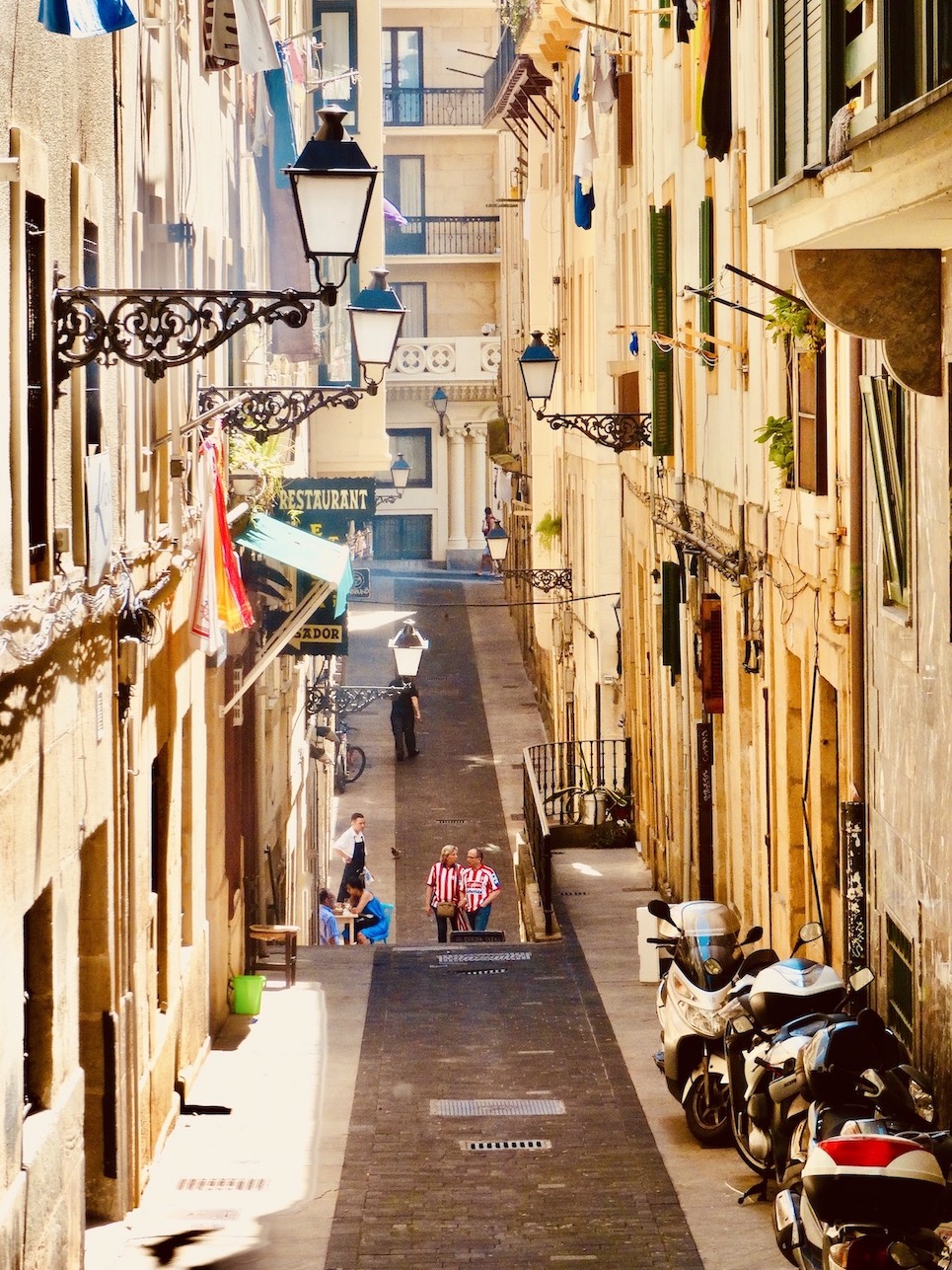 As I progressed, there were tantalising glimpses into near empty side streets, where flags hung from the windows above iron lanterns. I was half thinking of heading down one, but by this point I was feeling determined to reach the cathedral. 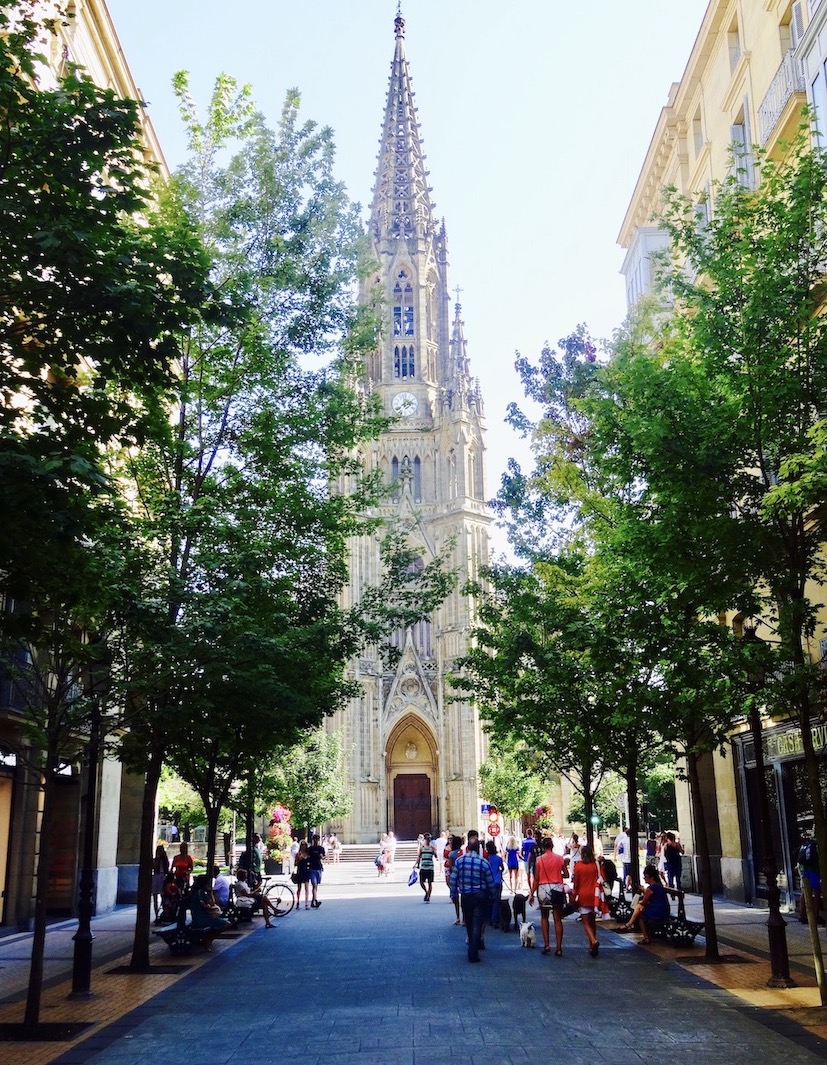 Built in the late 19th century, this striking Neo-gothic church started out as a modest chapel. Expanded and embellished several times over the centuries, now it stands as the most remarkable religious building in The Basque Country. 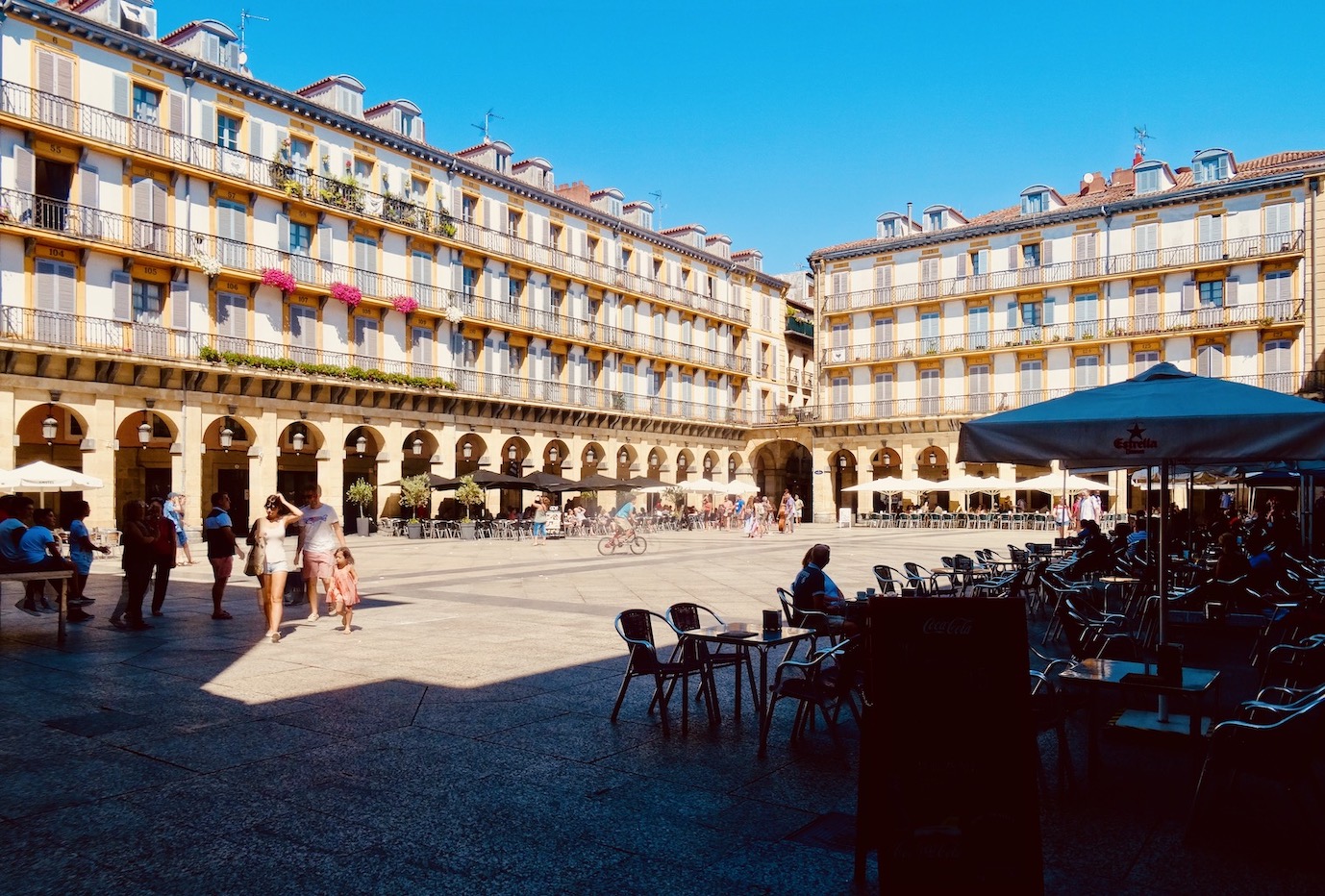 I couldn’t tell you exactly how many Plaza de la Constitucións I’ve seen throughout my travels in Spain. But I’m guessing it’s a lot. In terms of charm and scale, San Sebastian’s square certainly holds its own.

Constructed as a key component of the city’s rebirth following the great fire of 1813, the square initially served as a bullfighting arena! Indeed you can still see the painted bullring box numbers above many of the shuttered windows. 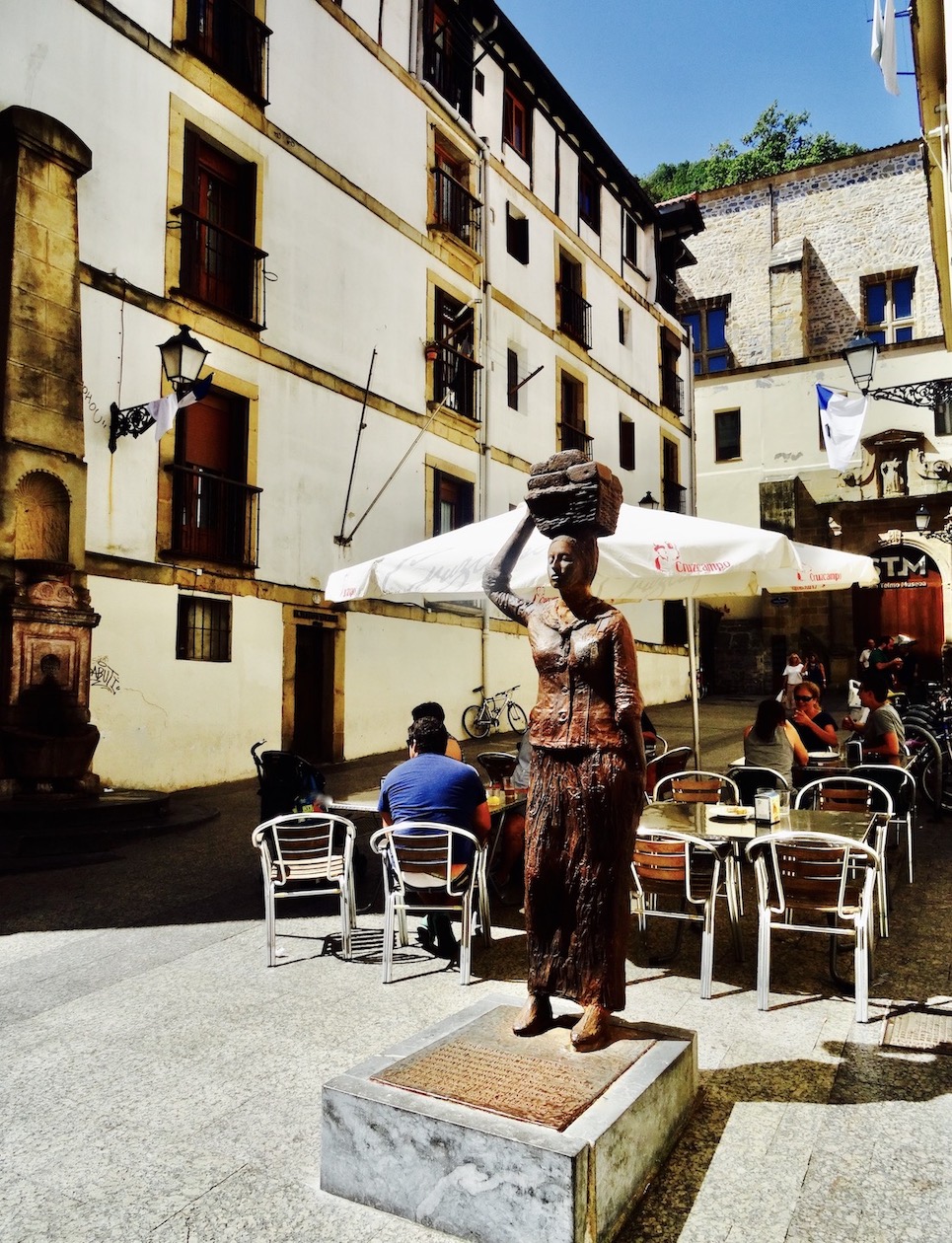 In between the various cafes, bars and traditional food stores, this statue of a woman with a basket of bricks on her head caught my eye. The piece stands in honour of all the women who contributed to the rebuilding of the old town in the years that followed the great fire. 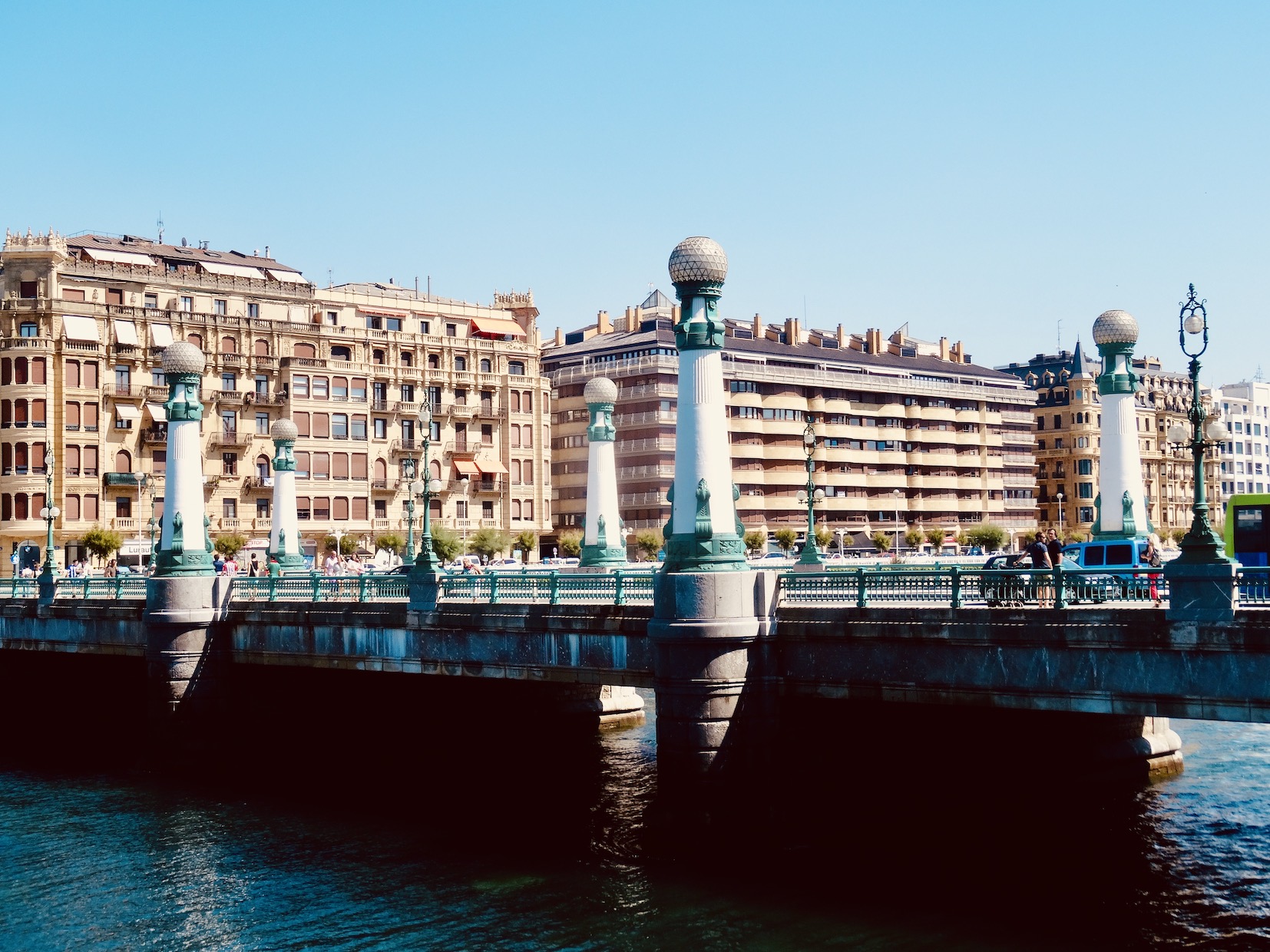 After a few beers on Plaza de la Constitución, I set off on the long, ambling walk back to my hotel room. It was late afternoon when I crossed María Cristina Bridge, with its fine views over the Urumea River.

Staring out across the water, I felt glad that I’d included San Sebastian in my trip. Sure, the entire place had been way too frantic for my liking. But I still consider it an essential stop when in the region.

One day, if I’m ever back in that neck of the woods, I think I’d like to visit in the winter. Take a walk down Playa de la Concha without all those people. Let my imagination sweep me back to 1945 when a crazy Belgian army general crashed into the deserted sands.

Like this? Why not have a read through my many other reports from all around Spain.