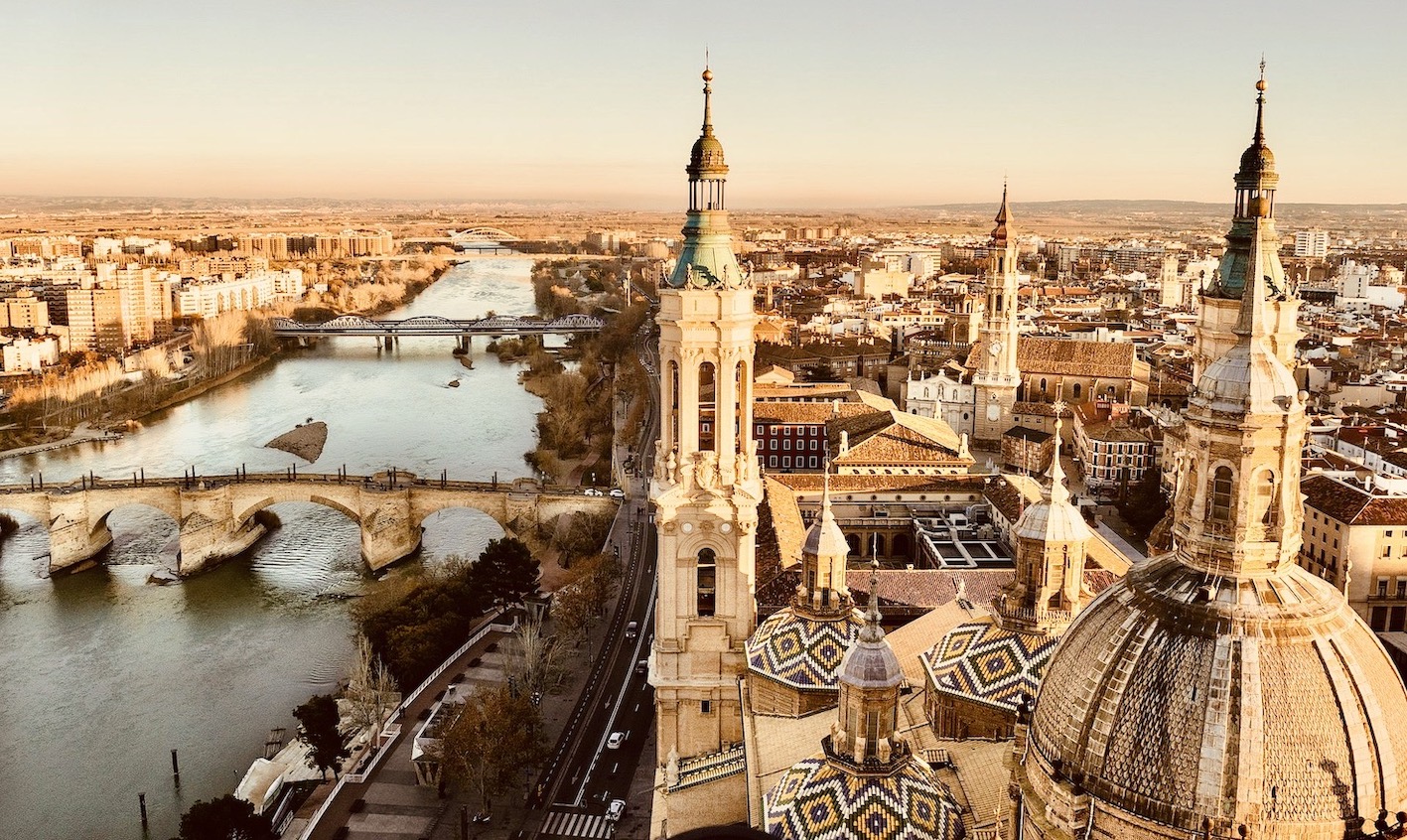 September 2015. I remember waking up in my Zaragoza guesthouse feeling absolutely knackered. This was no surprise when I consider the weeks leading up to my arrival.

Having finished my summer teaching contract in the coastal town of Castro Urdiales, I’d set off on a trip across the north of Spain, taking in the cities of Bilbao, San Sebastián and Pamplona. Sometimes, when you spend extended periods on the road, you just need a rest. 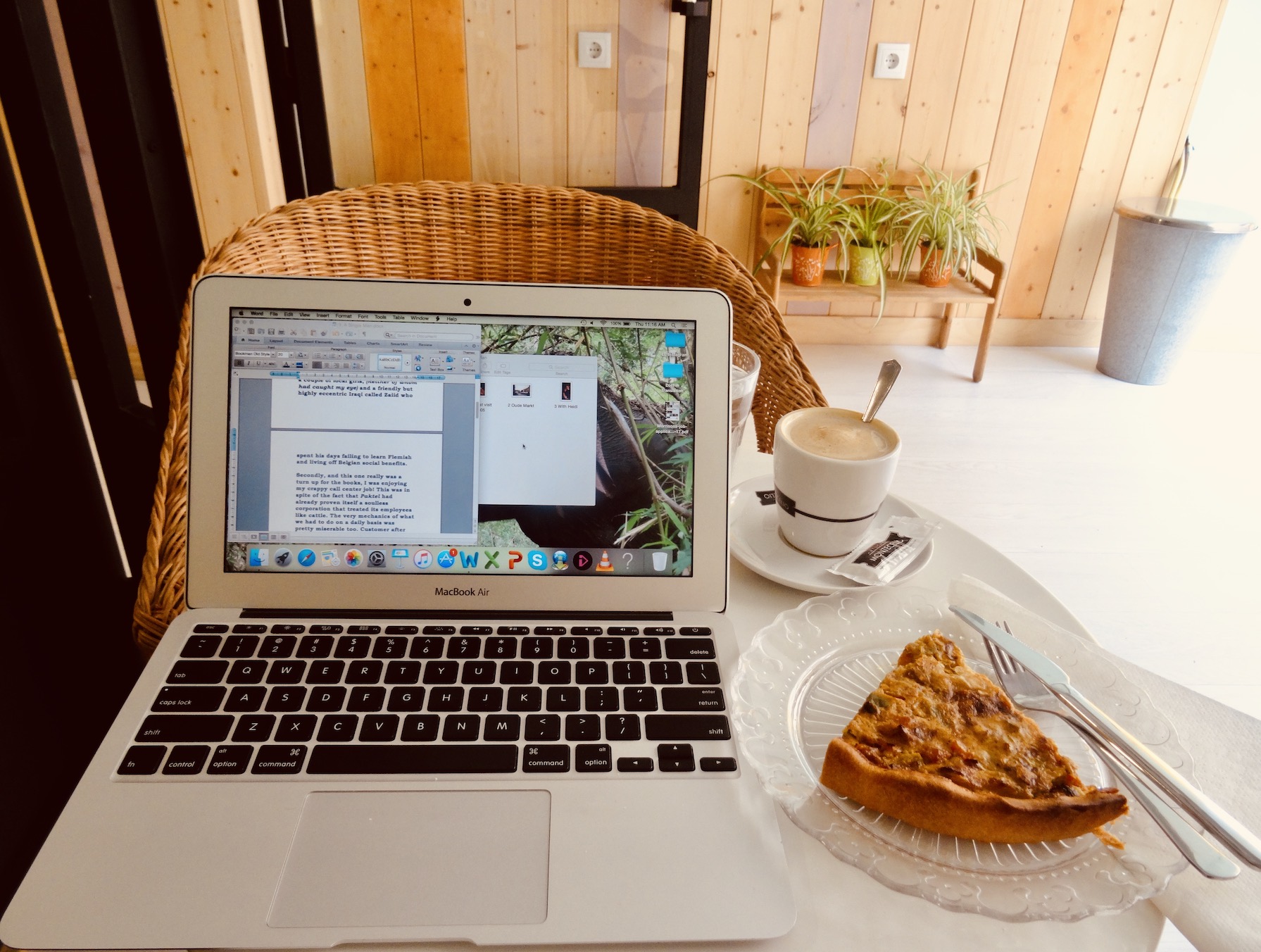 I remember lying in bed staring at the ceiling for an hour before realising that, as tired as I was, I definitely needed coffee. Thus I threw on some clothes, bundled my Mac into my backpack and walked across the road to Cabala Cafe. It was literally the closest thing I could find.

Settling down, I ordered coffee after coffee, then a generous wedge of ham and mushroom quiche. Inspired by the lovely little spot I’d hidden myself in, I began work on an early draft of Zaid, a chapter from my short story collection Based in Belgium. 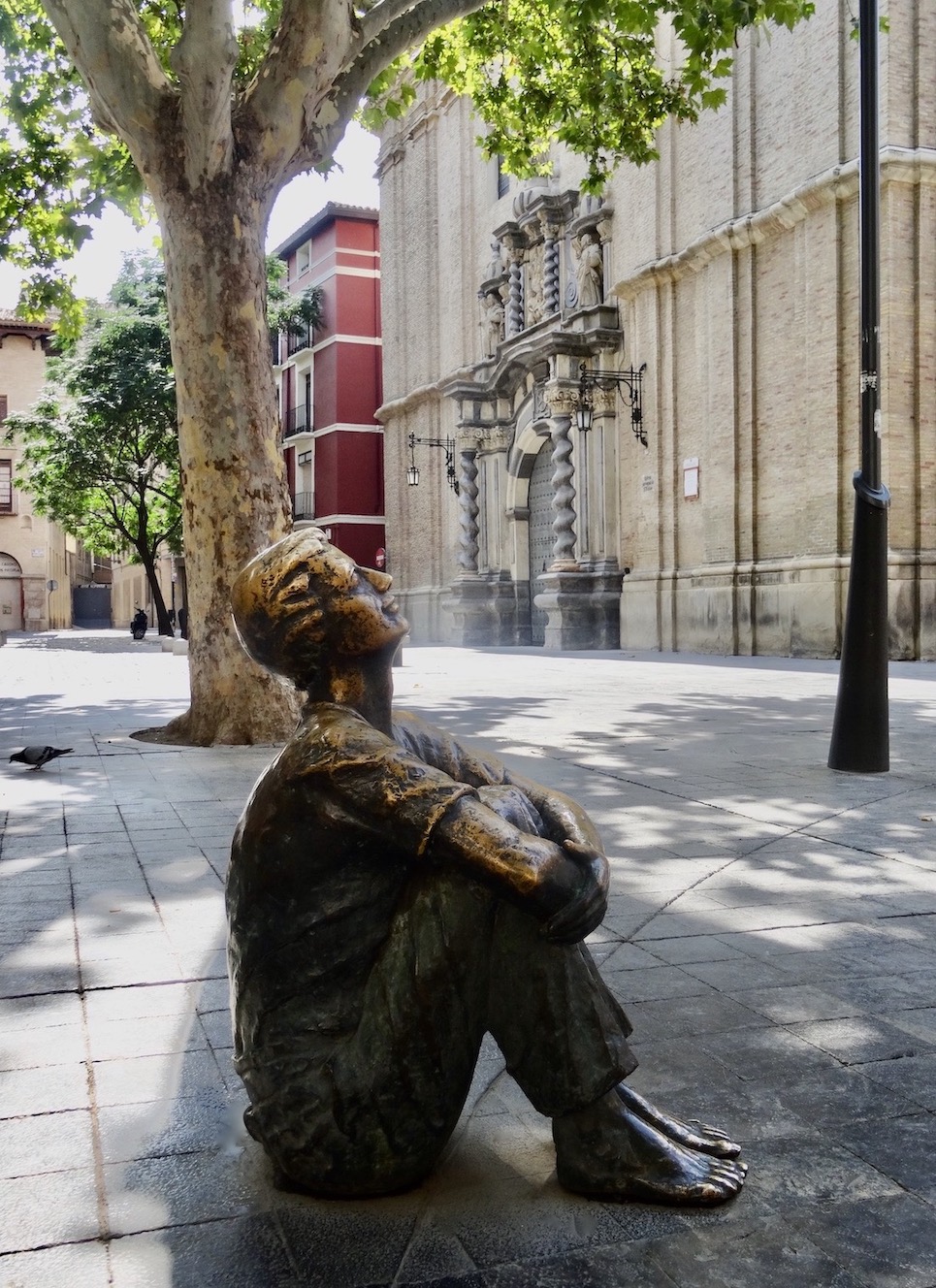 It was several hours later that I finally grew restless of typing. Hence I decided to head out into the sunny afternoon for an aimless stroll through the city centre. Within just a few minutes I’d stumbled upon this curious statue of a man sitting on the ground, wistfully staring up at…. what exactly? 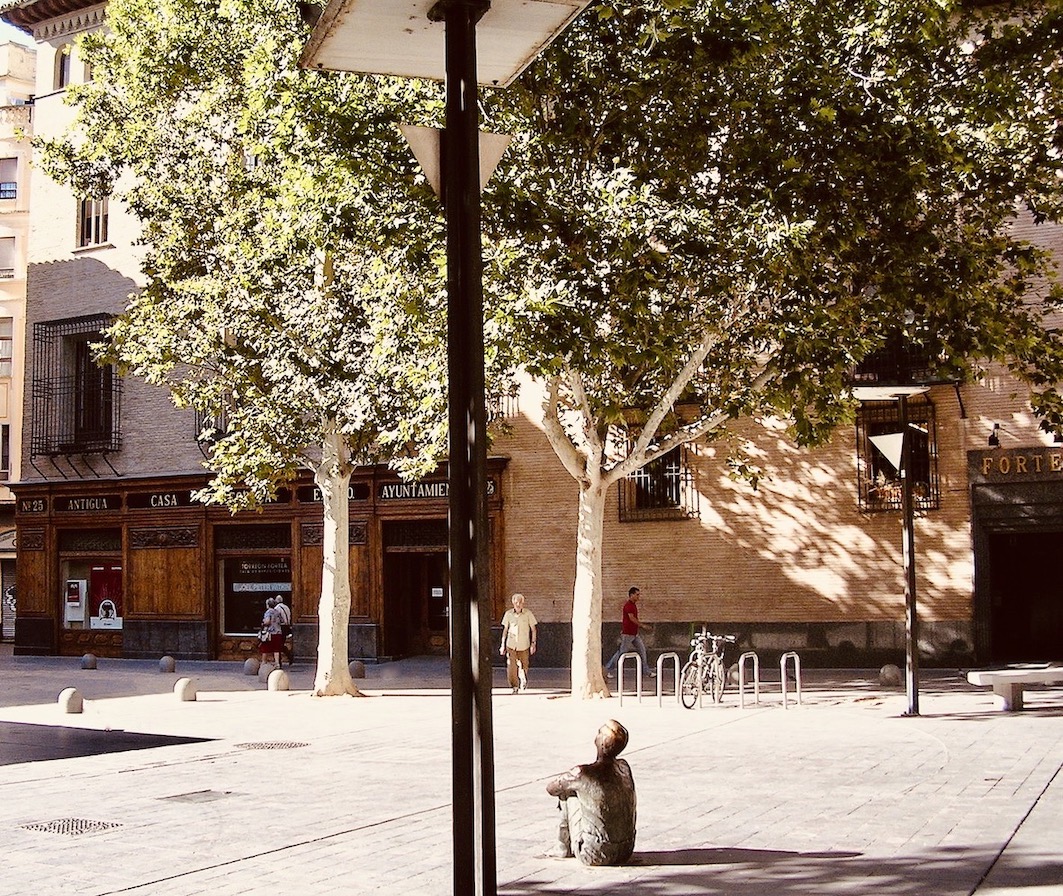 Have you ever heard of the The Leaning Tower of Zaragoza? I certainly hadn’t! Zaragoza’s endearing Sitting Man Statue is actually a memorial to the city’s once glorious eighty metre structure. Built in 1504, it was taller than the famous leaning tower in Pisa and quickly became one of the iconic structures of Spain. 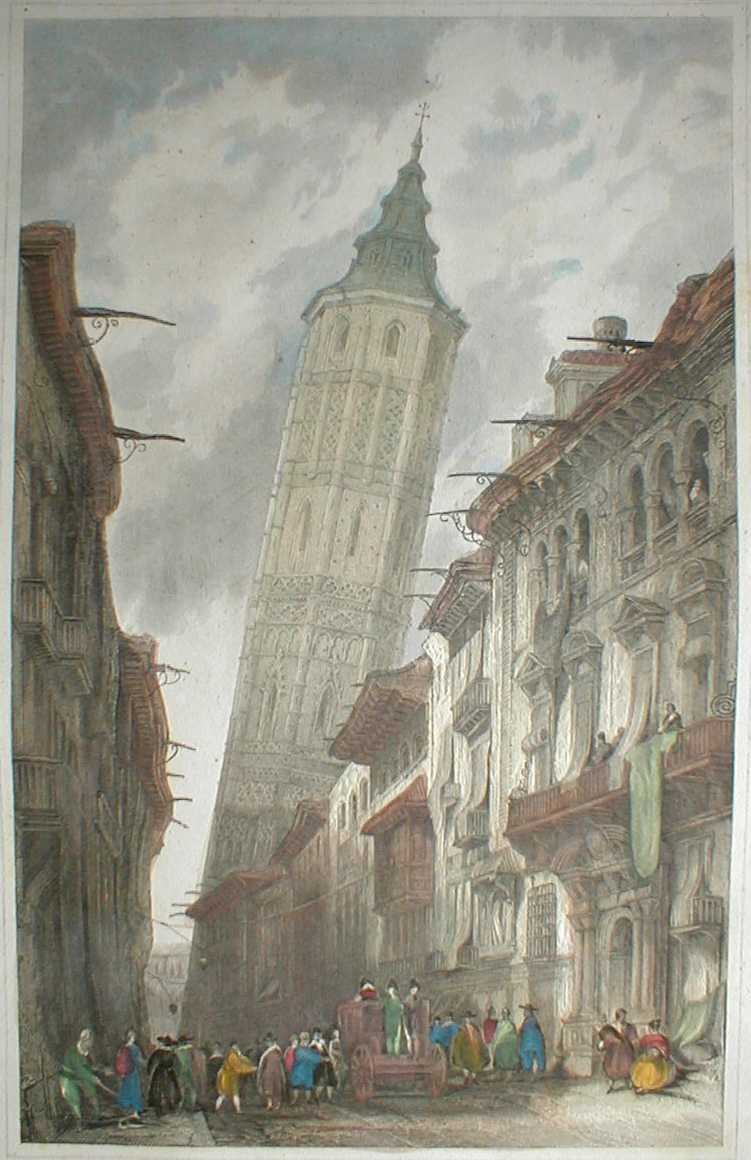 The Leaning Tower of Zaragoza.

Unfortunately, its construction had been a shoddy one, resulting in an increasingly alarming tilt. By the 1870s it was clear the entire tower might topple over at any moment. Having dithered for way too long, local authorities desperately tried to save it by removing its triple spire.

Eventually, after more attempts to steady it, the council demolished the tower in 1892. One historian described the event as “the greatest artistic crime committed in Spain”. The tower’s bricks later found their way into a number of new buildings across the city. 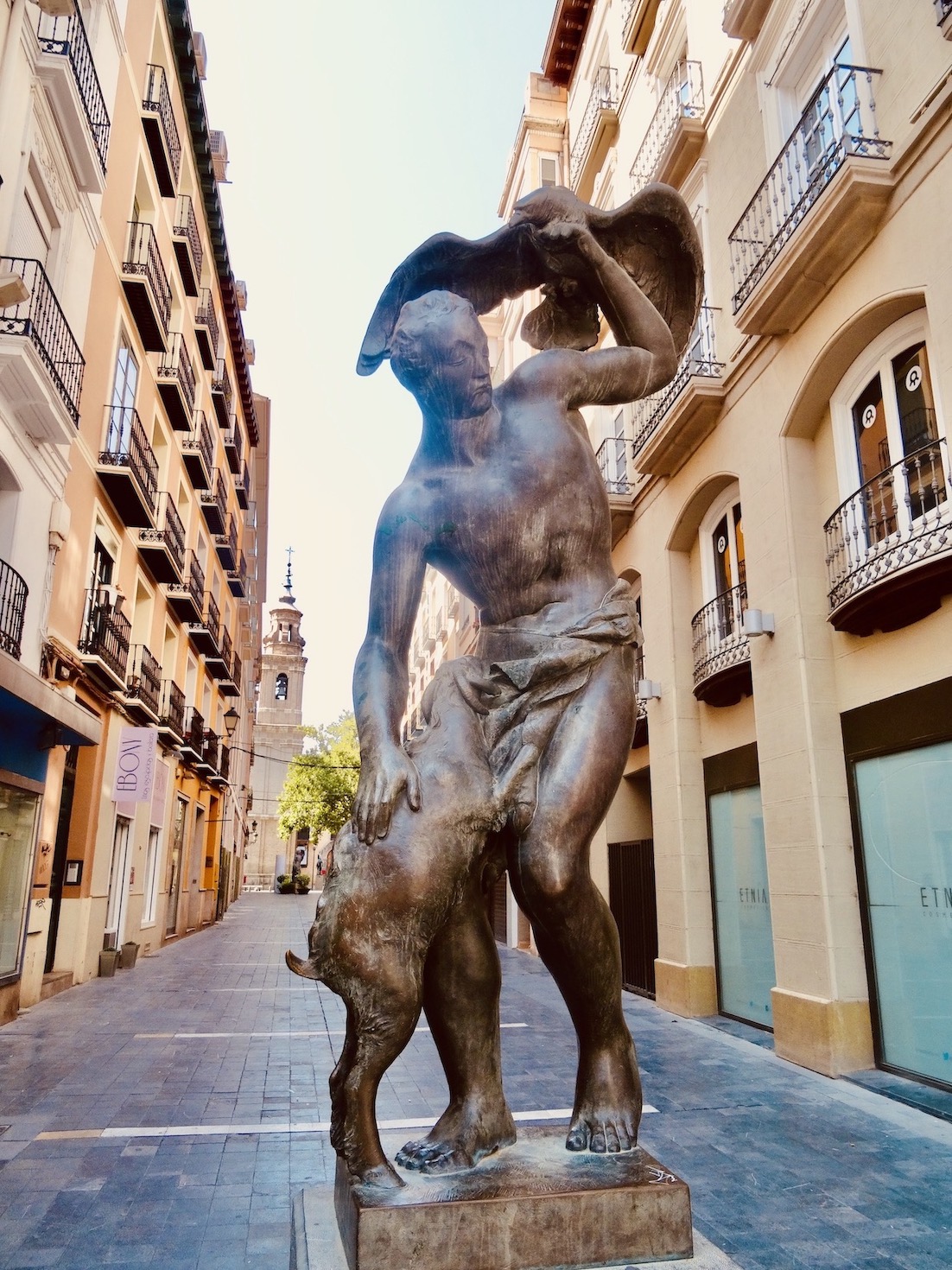 Nearby, I happened upon another statue, El Pastor del Aguila, which translates as Shepherd and Eagle. Created by the celebrated sculptor and painter Pablo Gargalla, it shows a shepherd fighting off an eagle as it attacks one of his lambs.

As with much of Gargalla’s work, the piece has classical Greek values and takes inspiration from Picasso’s early work. Visitors to Zaragoza can see more of the artist’s creations at the Pablo Gargalla Museum. 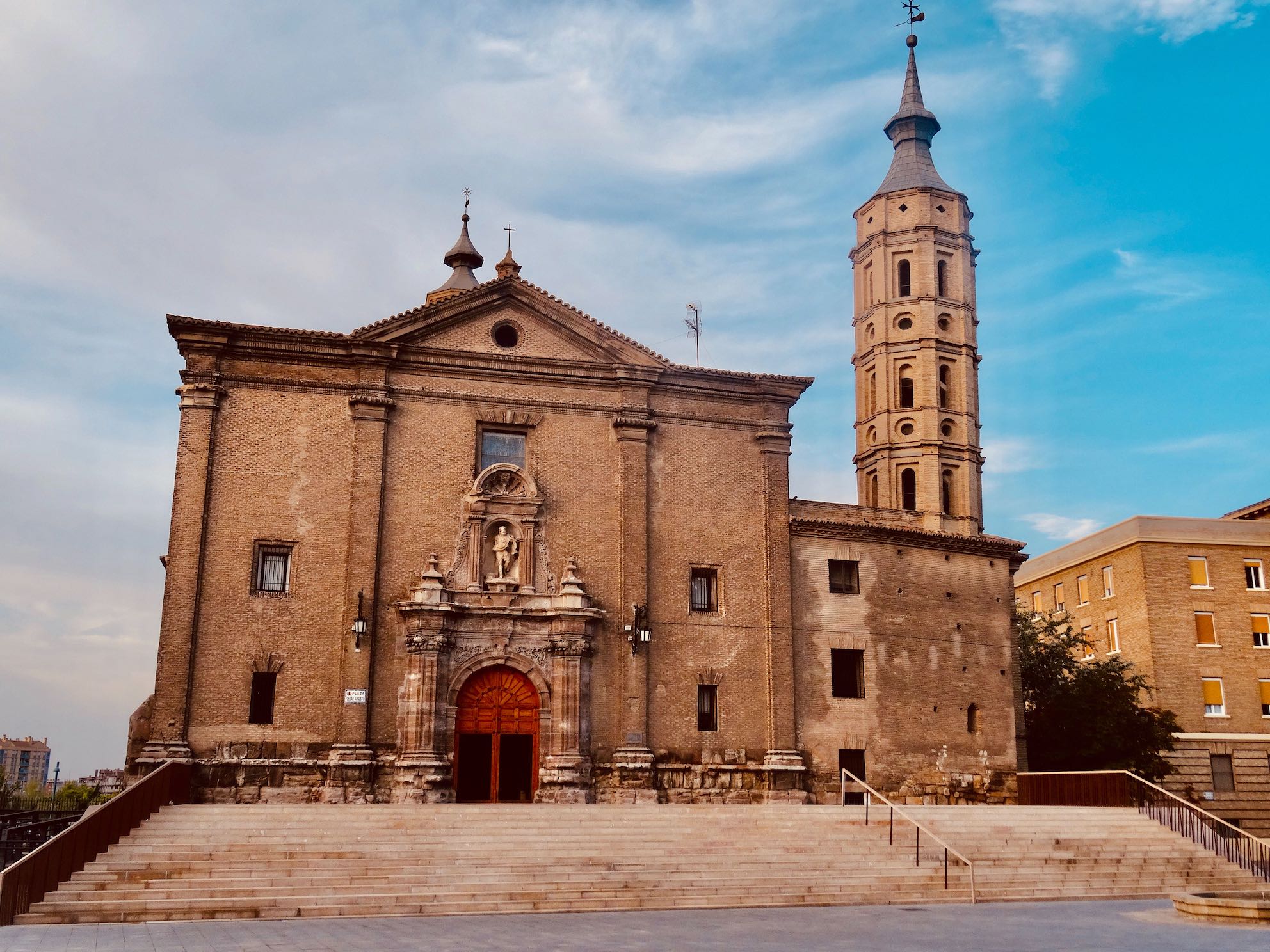 As I have come to expect from Spanish cities, Zaragoza’s old quarter has some lovely churches. One of the more understated buildings is the Church of San Juan de los Panetes. It dates back to 1725 when it sprang up on the sight of the ruined Order of St. John of Jerusalem Church.

In 1933 the church saw some of the city’s ugliest scenes when anarchists against The Spanish Republic set the place on fire. They then proceeded to shoot at firefighters as they arrived to try and save the building. It wasn’t until the 1960s that the church got the full renovation it so badly needed. 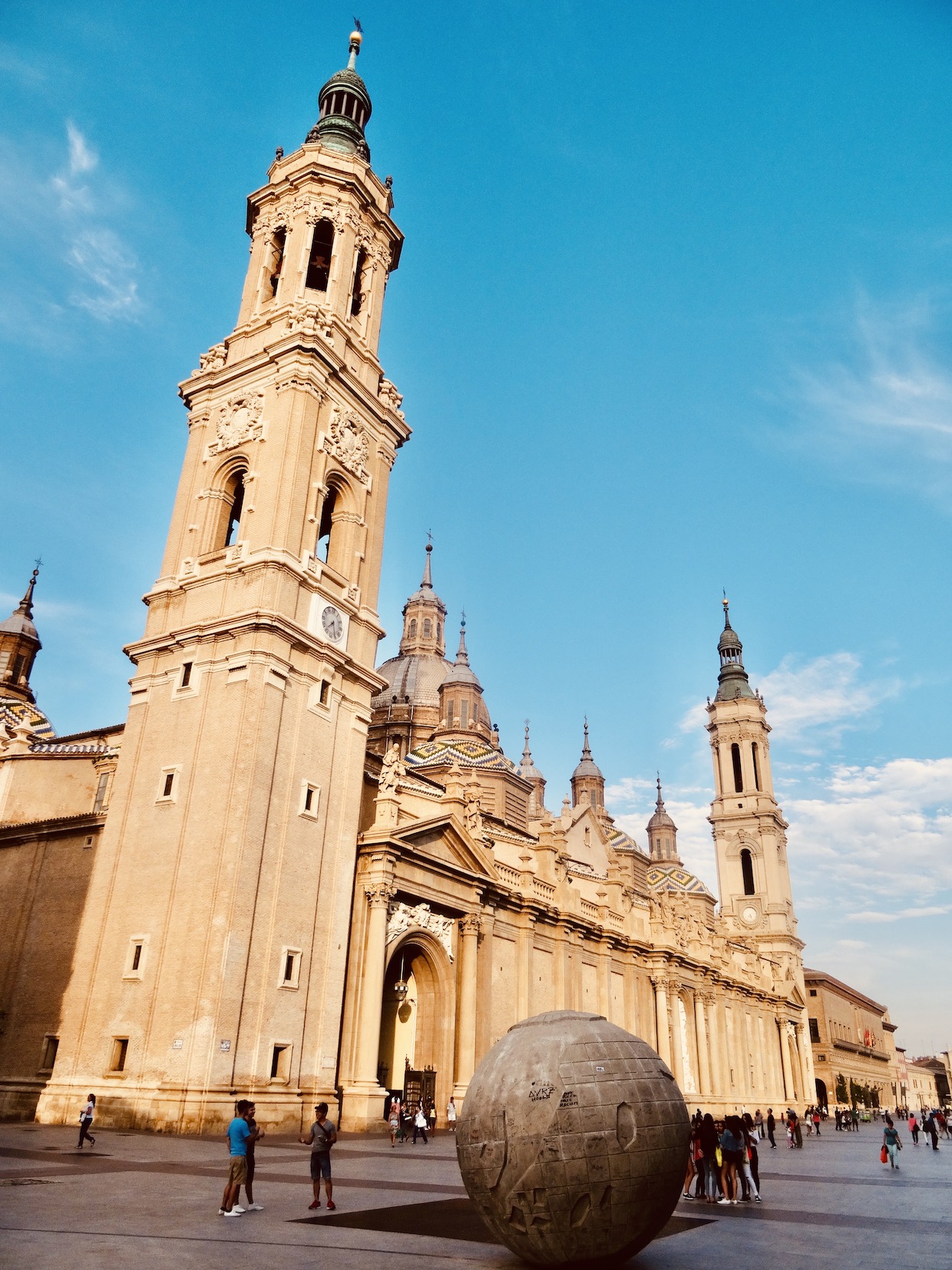 Zaragoza’s most striking house of worship is the eyebrow-raising Basilica of Our Lady of the Pillar. In addition to being incredibly gorgeous, the church has a backstory unlike any other. In fact, its origins go all the way back to the dawn of Christianity in Spain. 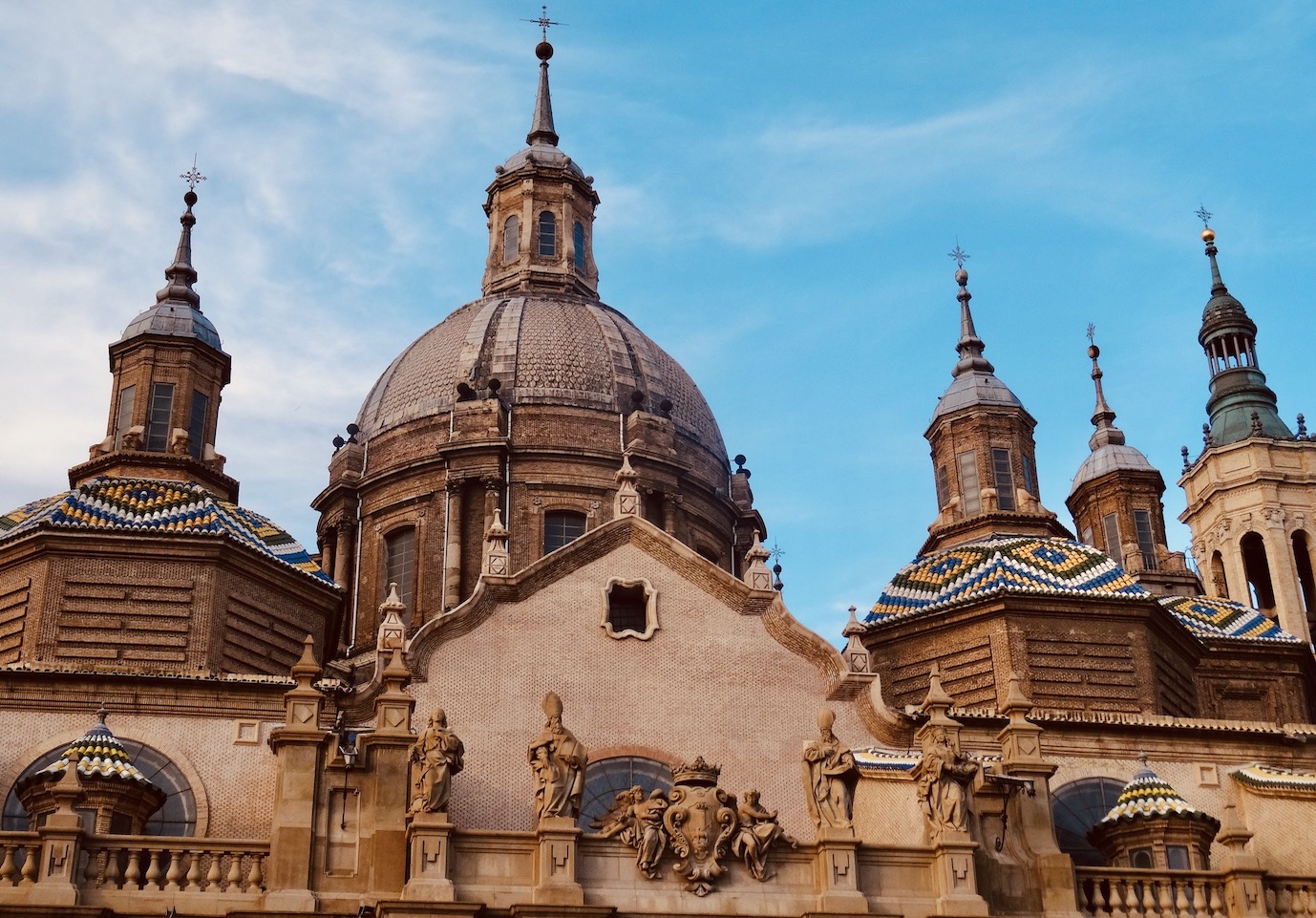 According to legend, the cathedral marks the spot where The Virgin Mary appeared to Saint James The Great in 40 AD. He was preaching the gospel on the banks of the Ebro River when she came unto him with an instruction to build a church in her honour. Moreover, Mary gave James a wooden image of herself and a marble pillar to serve as the centrepiece of the main altar. 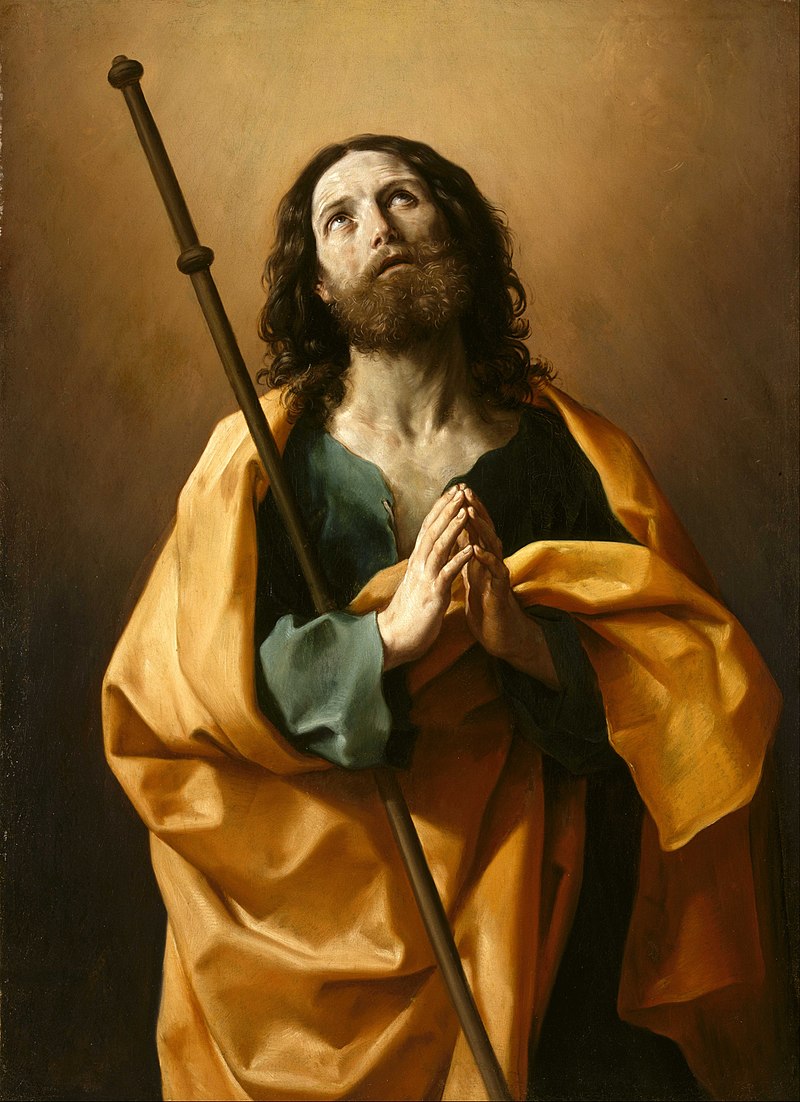 Saint James The Great: Has just spotted something unusual.

One year later, James finally got round to constructing a small chapel, which became the first church in history dedicated to Mary. James then returned to Judea, where King Herod beheaded him. 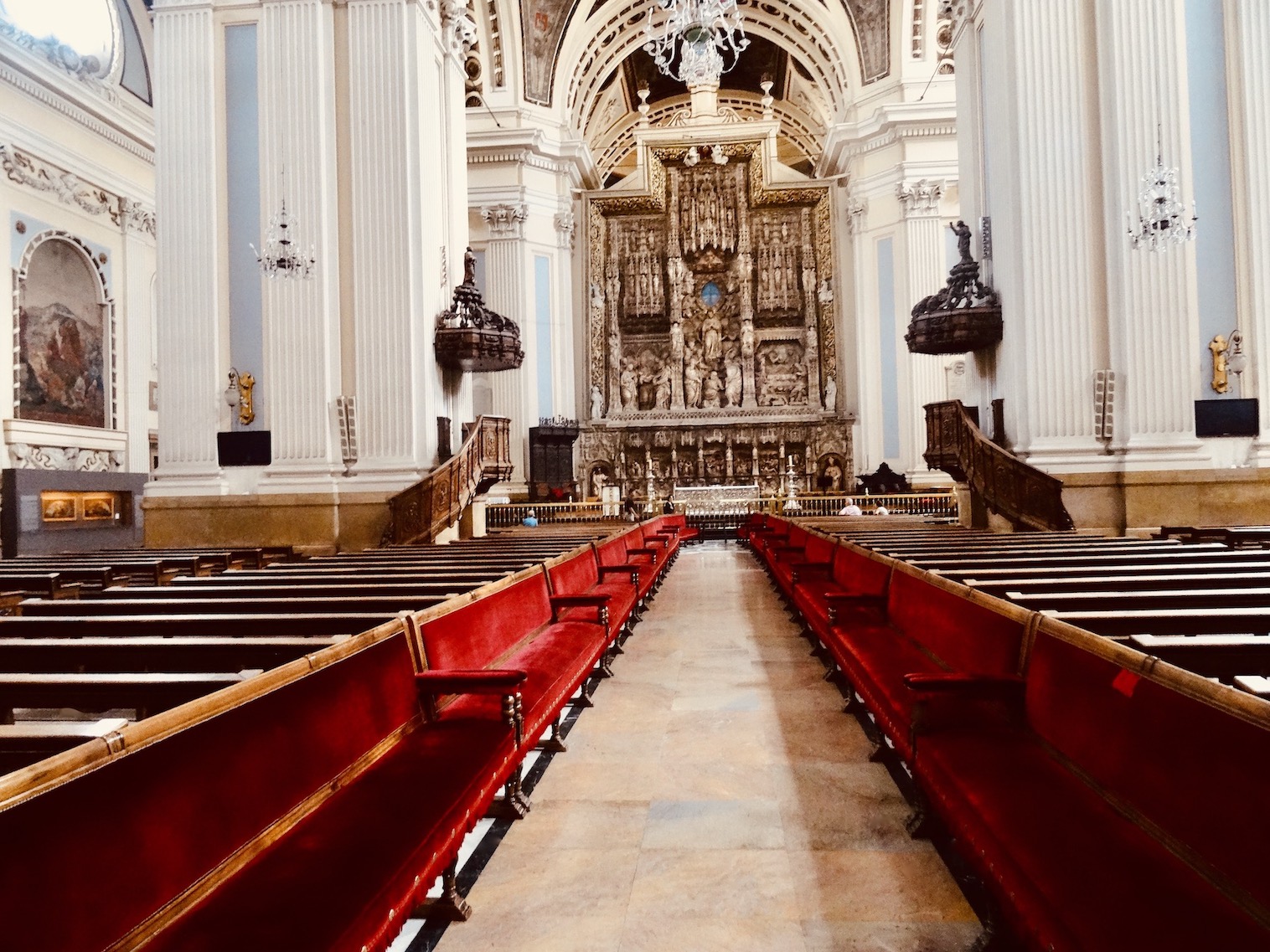 The chapel found itself transformed into a Romanesque church (around 1118) and then a Gothic church in the early fifteenth century. Construction of the Baroque style cathedral we see today began in 1681 upon the order of King Charles II, the last Habsburg ruler of The Spanish Empire. 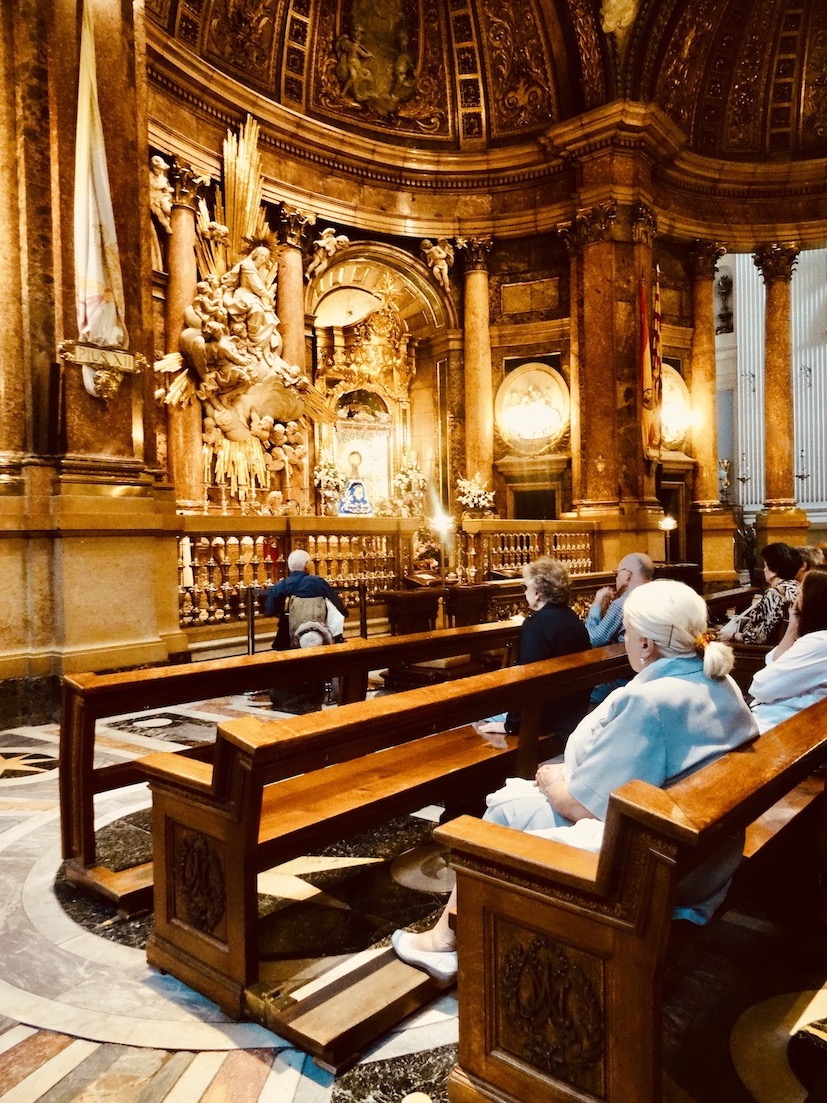 Today Christians from all over the world visit the cathedral to see what is claimed to be the original pillar and wooden image of Mary. 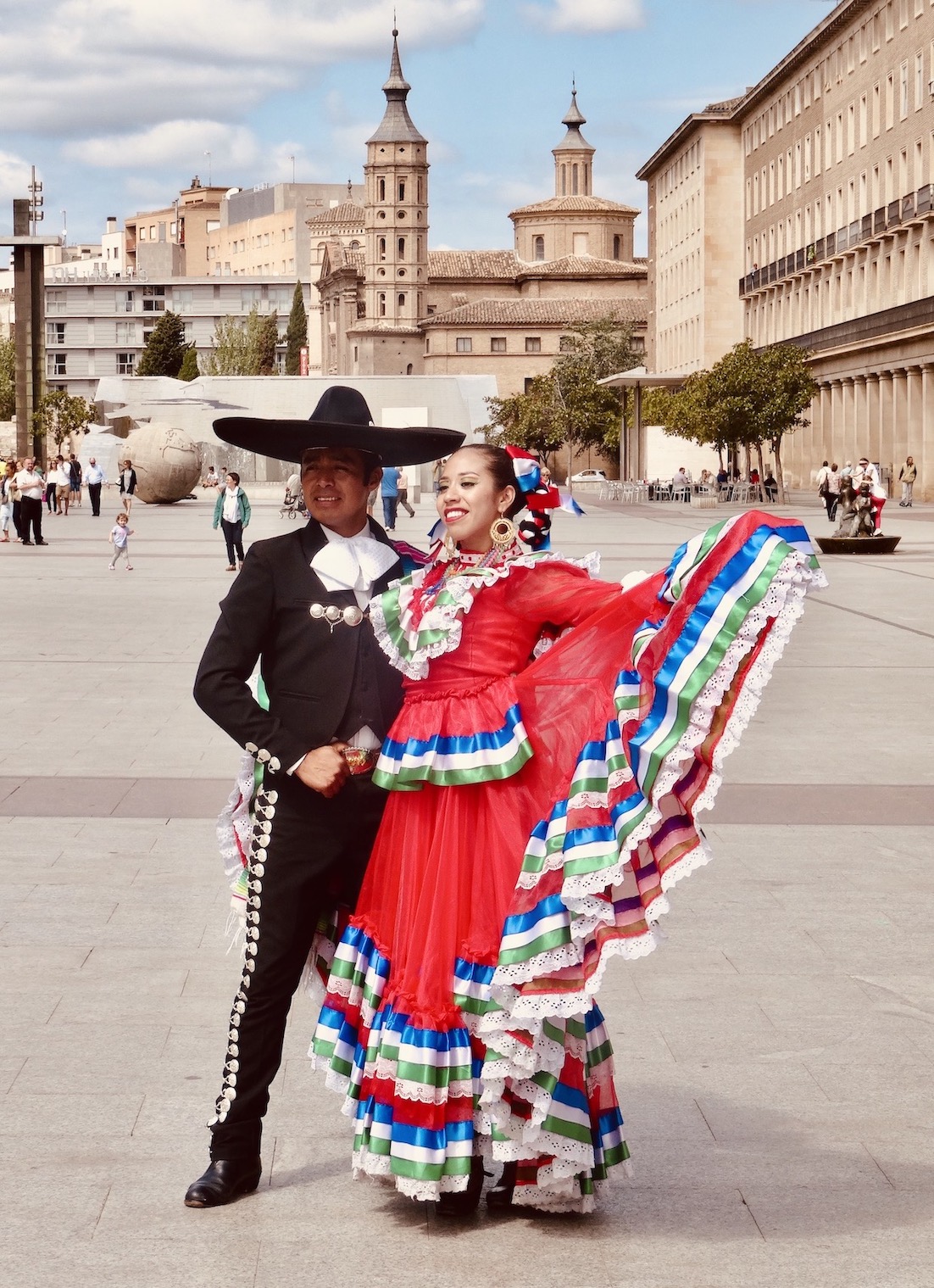 Even if going inside the church isn’t your cup of tea, it’s well worth admiring the exterior from Plaza del Pilar. There’s nearly always something happening on the square, from busking and dramatic performances to flamenco dancers strutting their stuff in full costume. 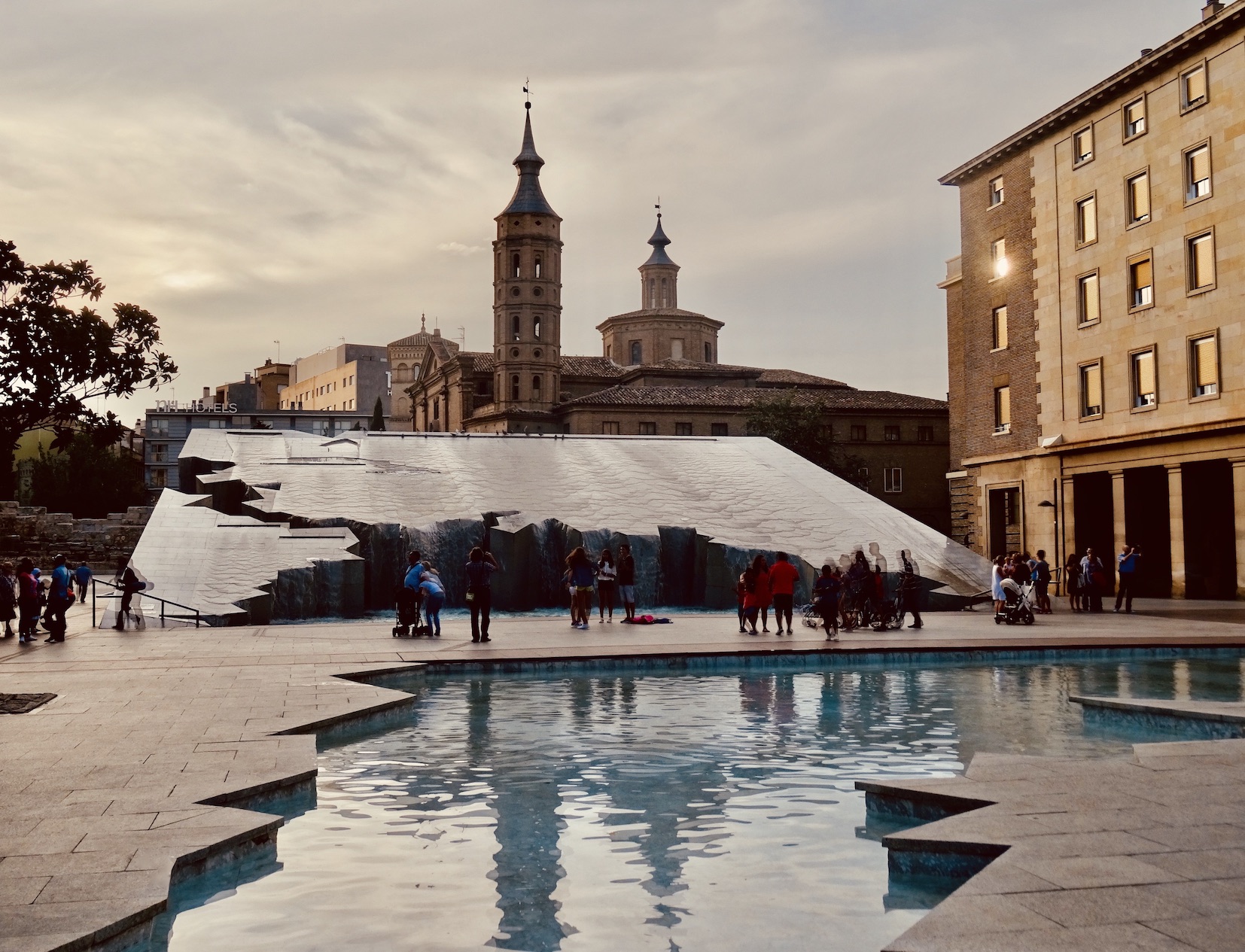 The raised stone slab has the coastlines of Cuba and Central America carved into it. Furthermore, the adjacent pool represents South America. I think it’s fair to say I have never seen anything quite like it. 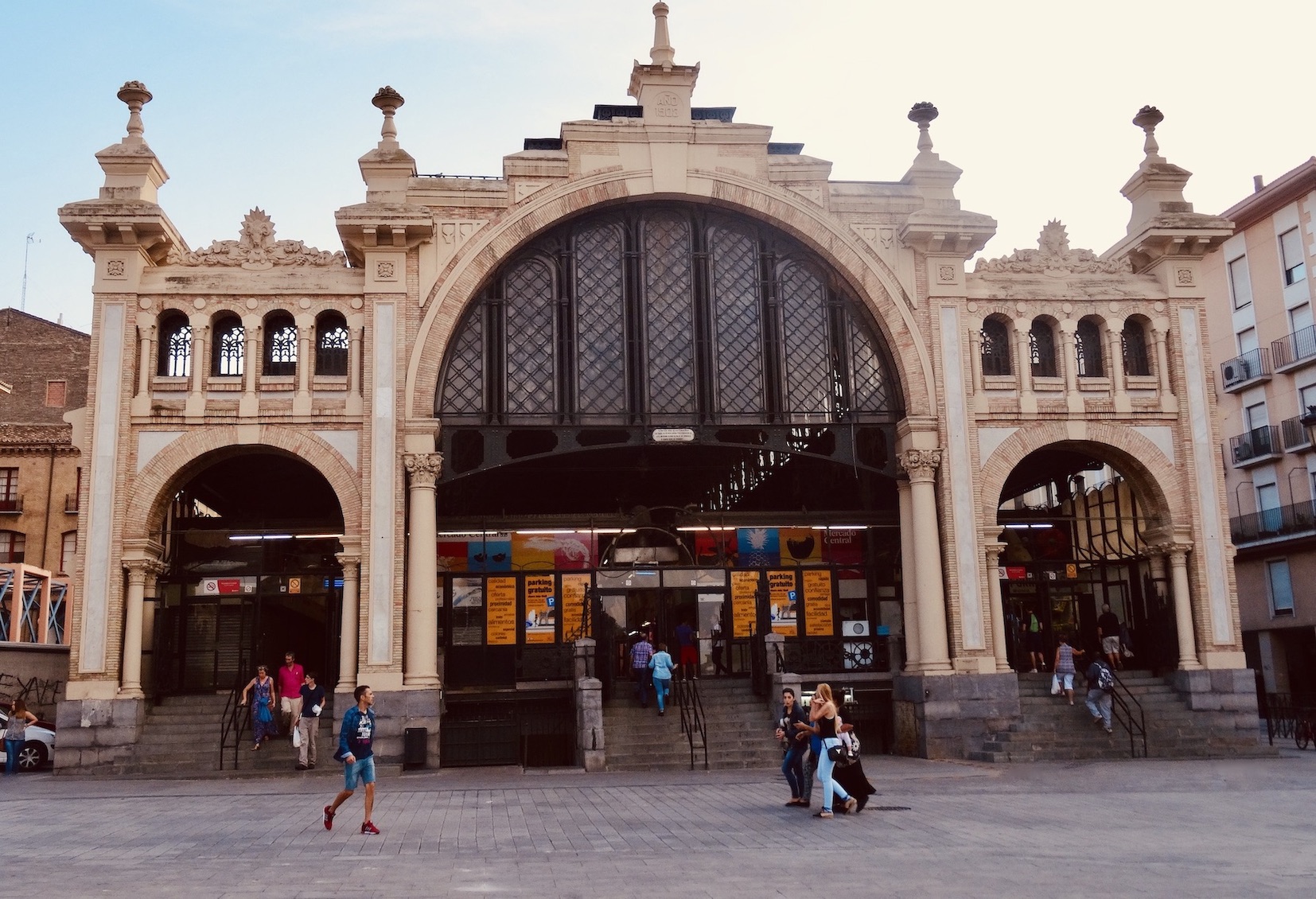 With my stomach rumbling, I followed my nose to Mercado Central, Zaragoza’s most historic market. Dating back to 1903, the prominent Spanish architect Felix Navarro brought the modernist complex to life using brick, stone, iron and glass. It lies on Plaza Lanuza, replacing an open air market that had been operating there since 1210. 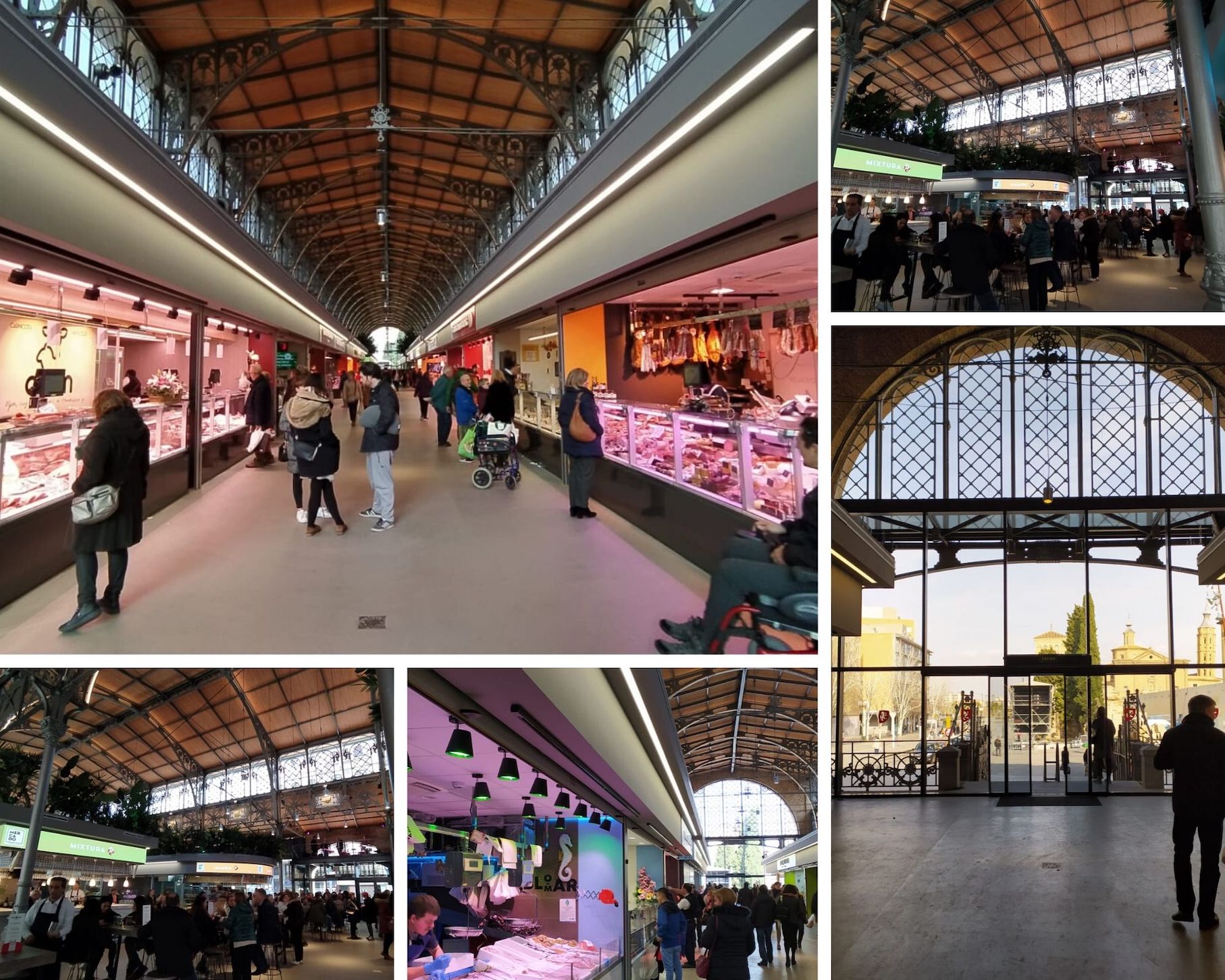 Inside, I wandered through the various alleyways, home to around 190 stalls. For the most part the markets here have passed through generations of local families, with an emphasis on fresh fruit, vegetables and fish. A few years after my visit I see that the market underwent a huge two year refurbishment project before reopening in February 2020. 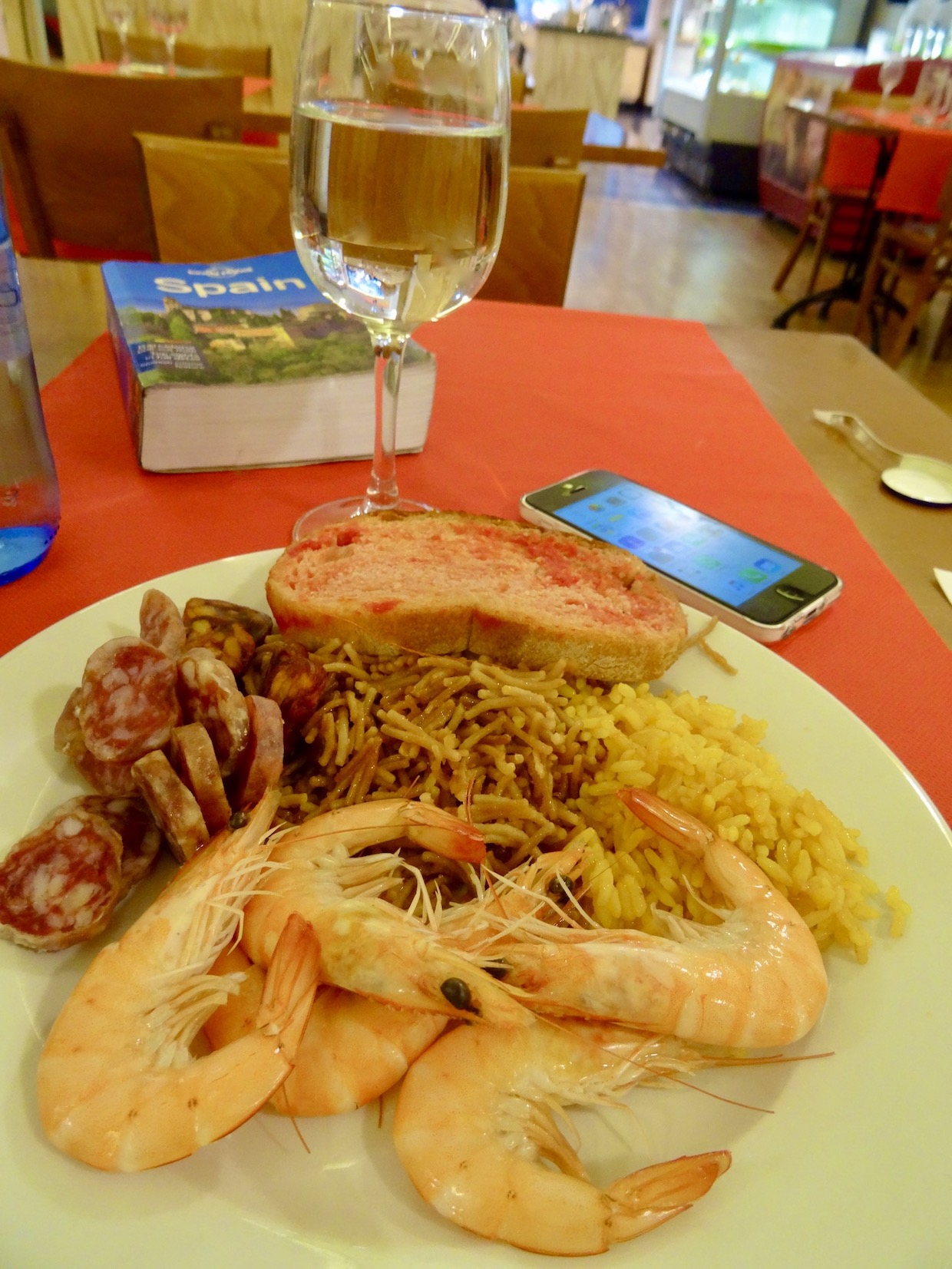 Despite treating myself to some nibbles at Mercado Central, I still felt hungry. So I helped myself to a few plates from the buffet counter at Restaurante Las Palomas. Suddenly, the tiredness that had plagued me at the start of the day returned with a vengeance, forcing me back to my hotel for a two hour siesta. 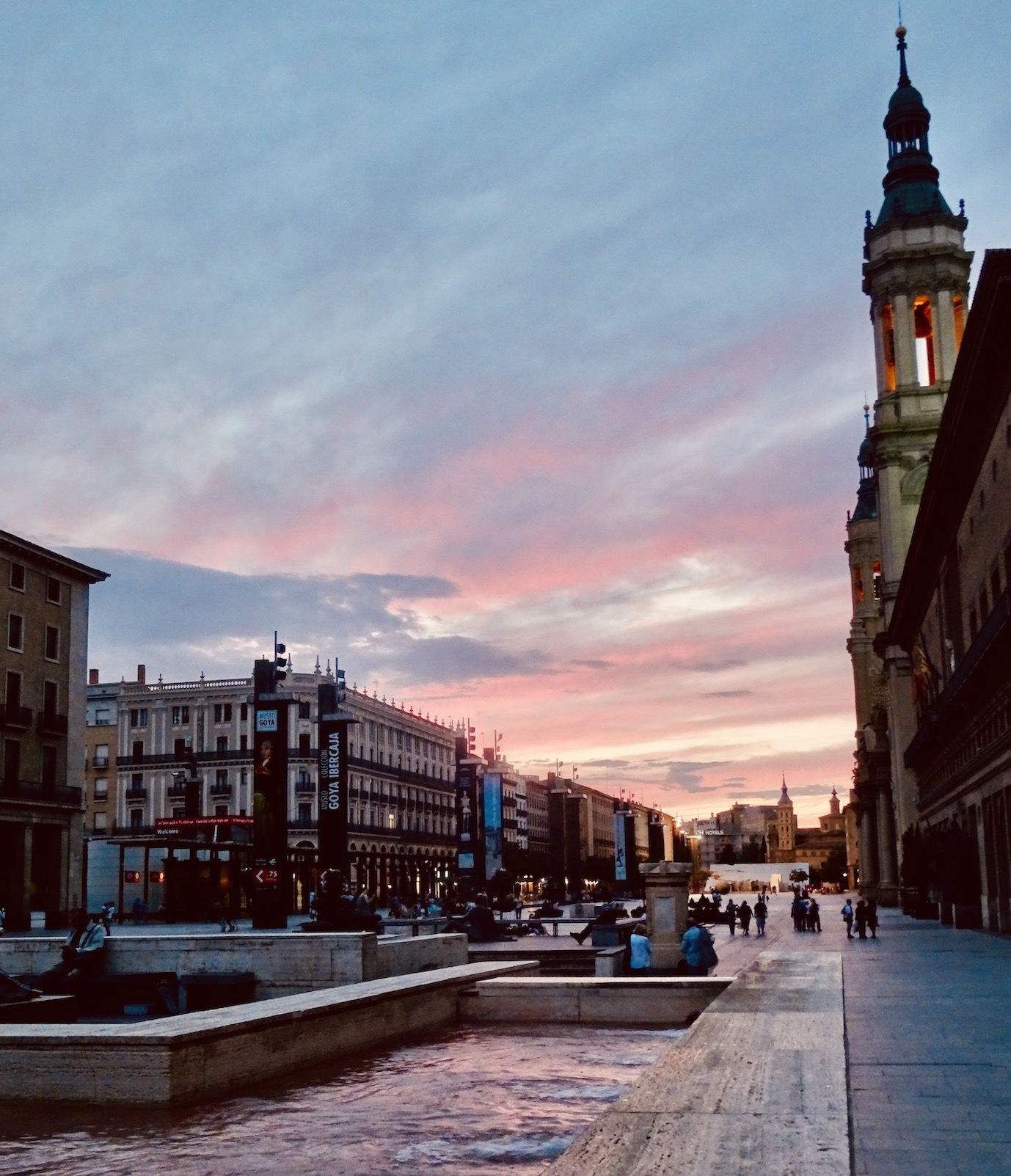 When I emerged from slumber it was already getting dark. So I forced myself out of bed and, groggy as hell, made my way back into the historical quarter. It was a fine evening, the sky throwing up lovely layers of pink, blue and grey. 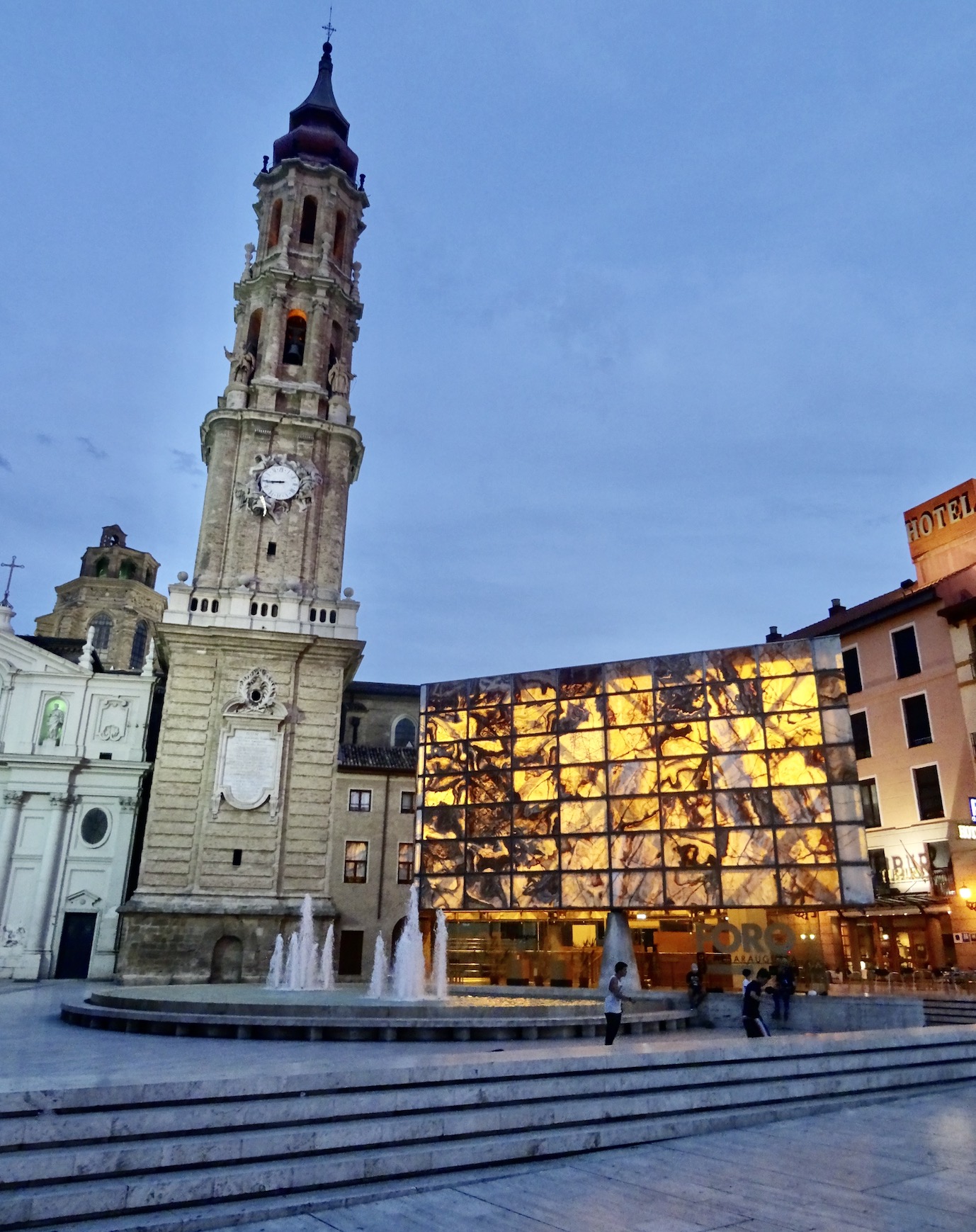 With no ambitions other than to stroll and feel less like a zombie, my wanderings accidentally took me to Plaza de la Seo. The fountain-laden square plays host to the city’s second cathedral, La Seo de Zaragoza and the Caesar Augusta Roman Remains Museum. 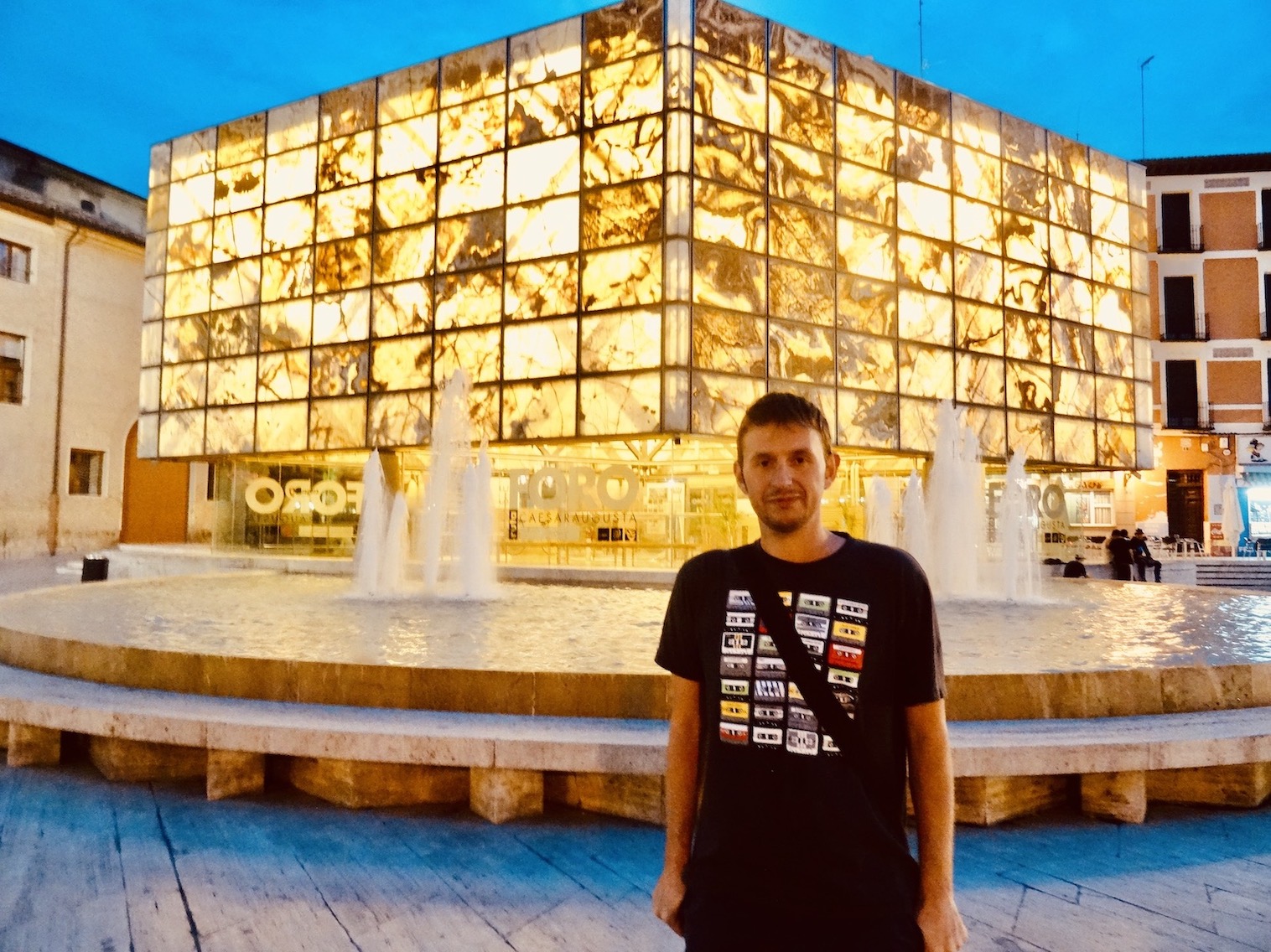 The museum displays the ruins of Zaragoza’s old Roman Forum from the days of Emperor Tiberius. I wish I’d found the time to visit instead of sleeping.

If I ever find myself back in the region, I’d definitely consider a return to Zaragoza. Doing the city as an overnight stay was already cutting it fine. But then, with my added tiredness thrown in, I look back at my time here as a missed opportunity. #nexttime

Like this? Why not have a read through my many other reports from all around Spain.