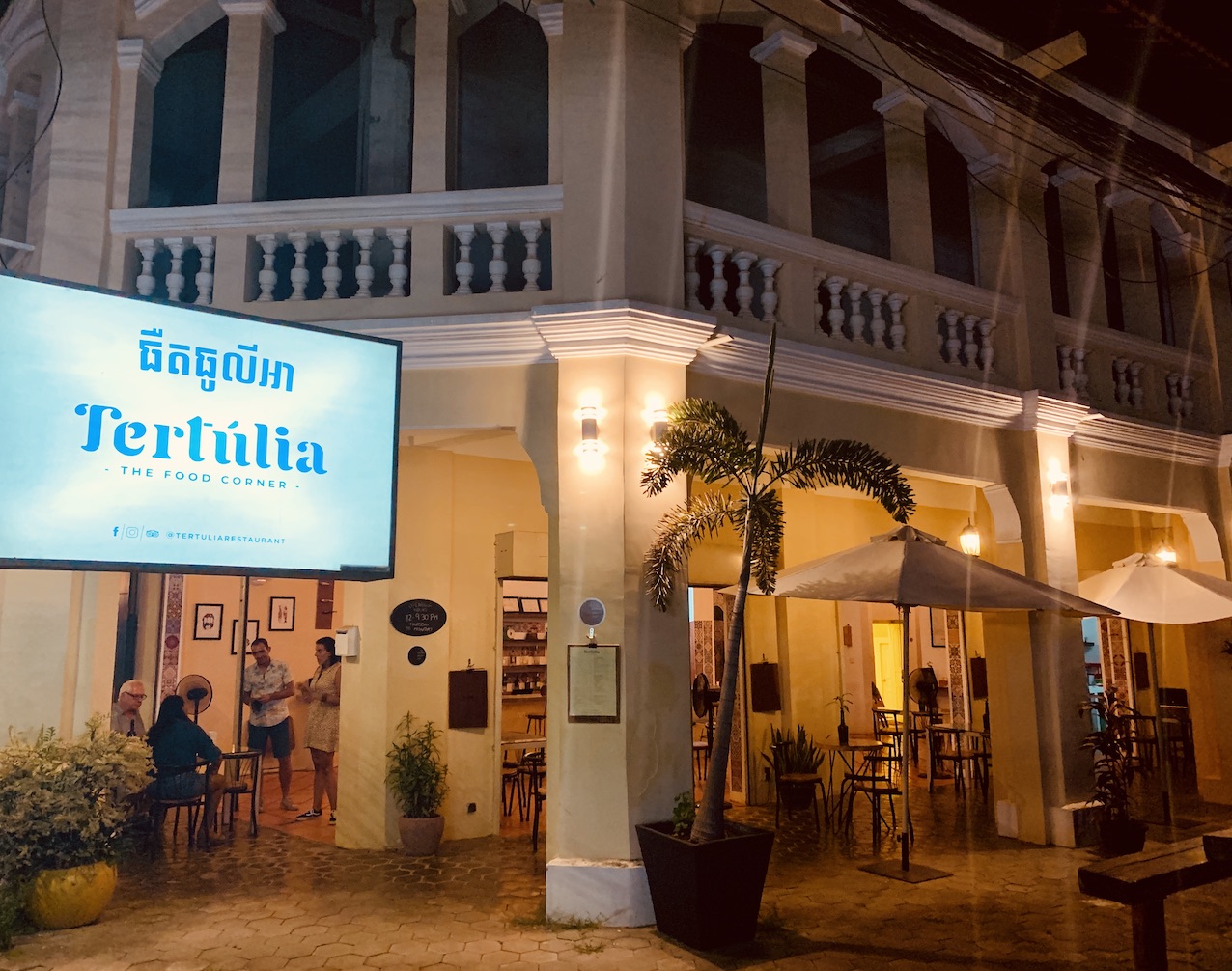 July 2020. It was our first night in the Cambodian city of Kampot and Sladja and I were strolling though the old town. Following the success of our guide on Where to Eat and Drink in Siem Reap, we couldn’t help but wonder if Kampot’s culinary landscape would hold its own.

As if in answer, we soon came upon Tertulia Restaurant, a Portuguese eatery housed in a magnificent old French colonial building. Strolling inside under the thick stone columns, we found ourselves greeted by Miguel, the Portuguese man who runs the place with his wife Carolina. 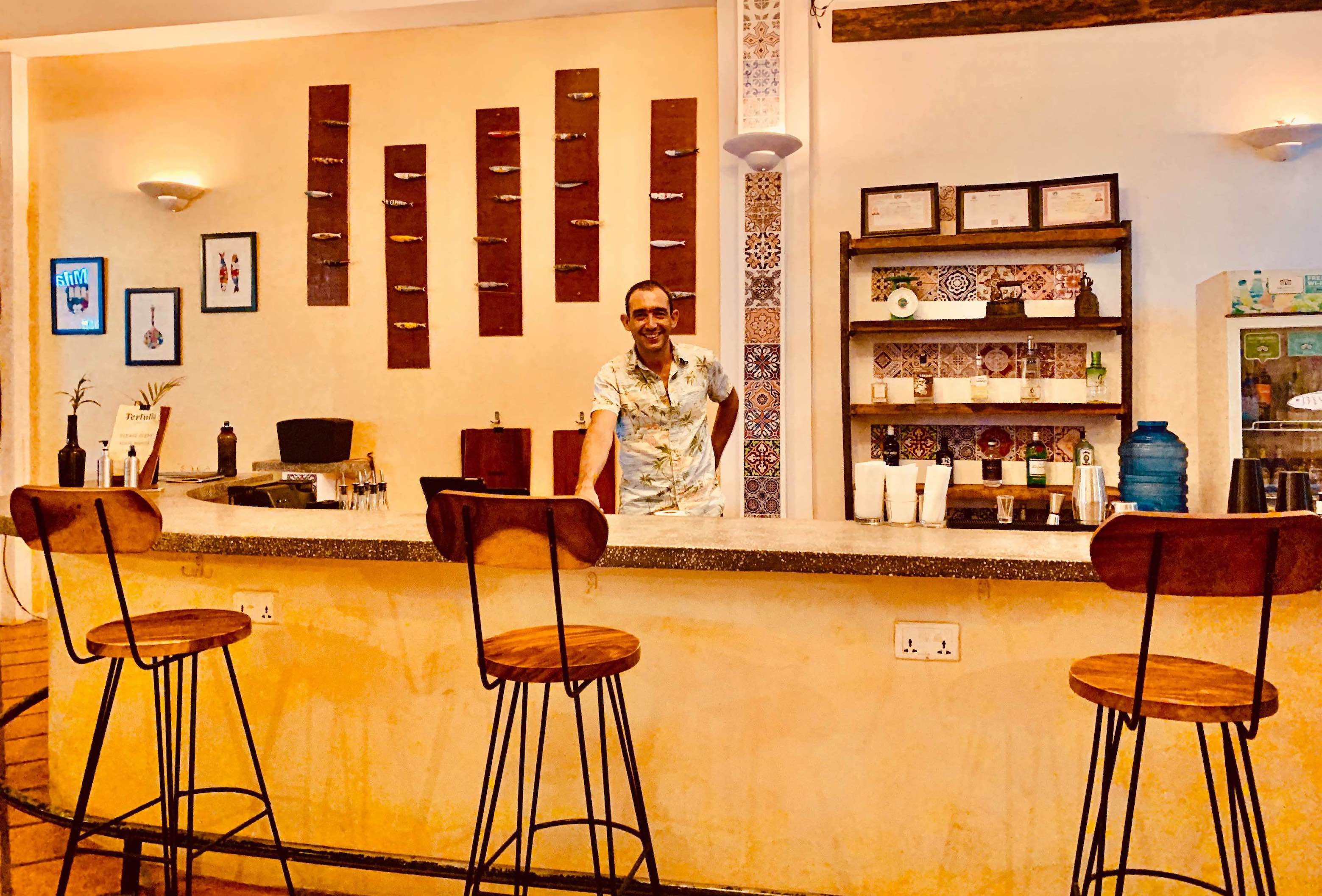 Miguel and Carolina have been running Tertulia since May 2019. They took over the business from another Portuguese couple, “quite by accident” according to Miguel. In fact, they’d been travelling around Cambodia when they came across the old joint. Having enjoyed some drinks and a chat with the owners, they were surprised to learn that the business was for sale. 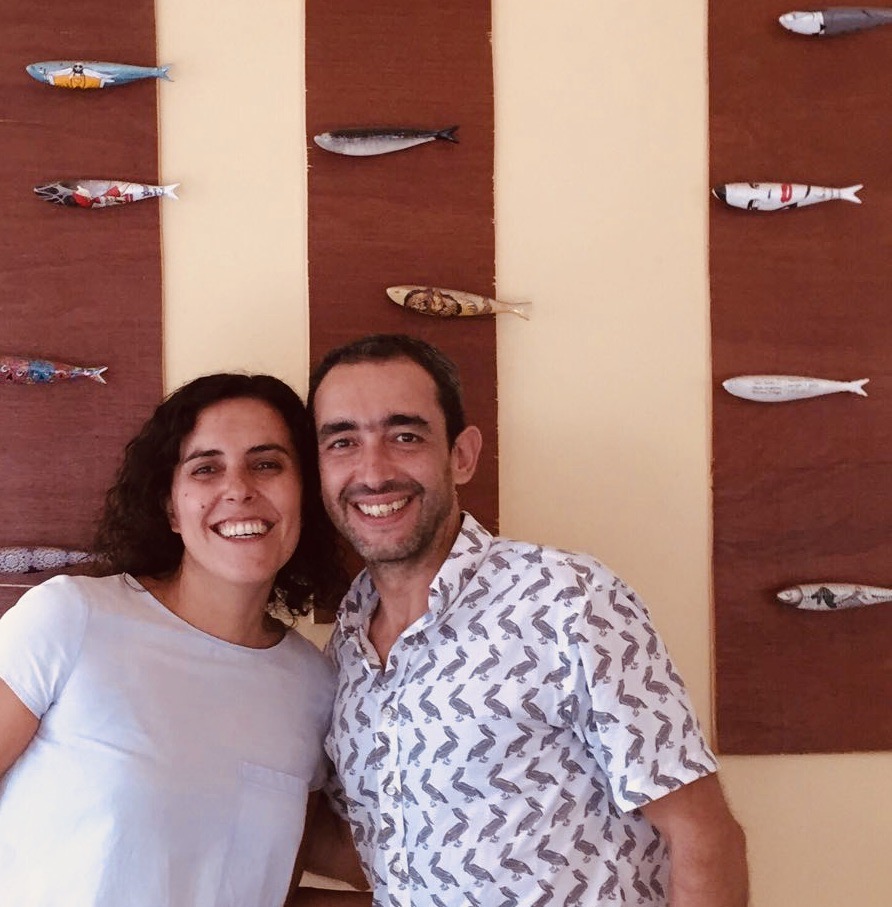 Tempted by the promise of an adventurous new life in the south of Cambodia, Miguel and Carolina figured what the heck, you only live once. Thus Miguel took the brave decision to leave his job as a corporate events manager back in Lisbon. Likewise, Carolina bade farewell to her marketing post with McDonald’s. 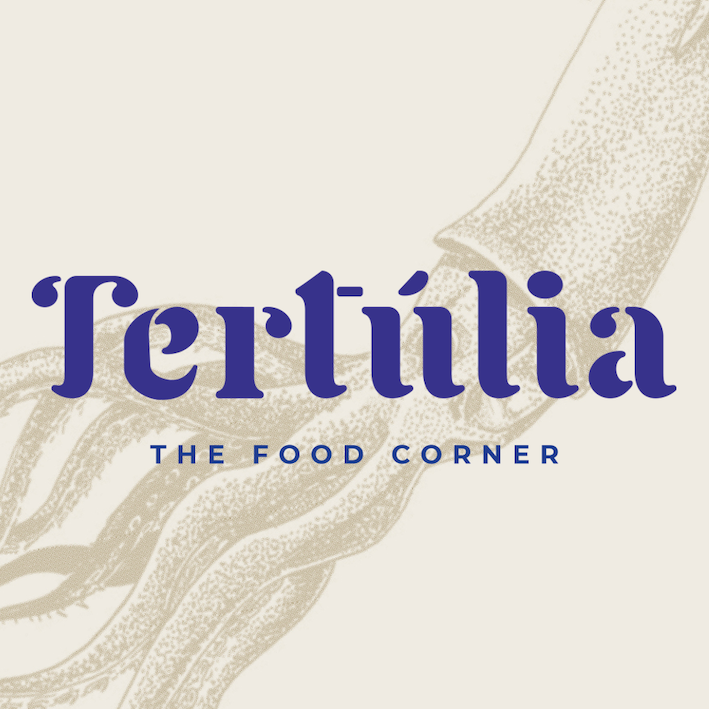 Miguel says the takeover was pretty smooth. “We kept the kitchen staff and retained the name” he explained, with his trademark grin. “Then we brainstormed how we could build the menu and  personalise the marketing”. 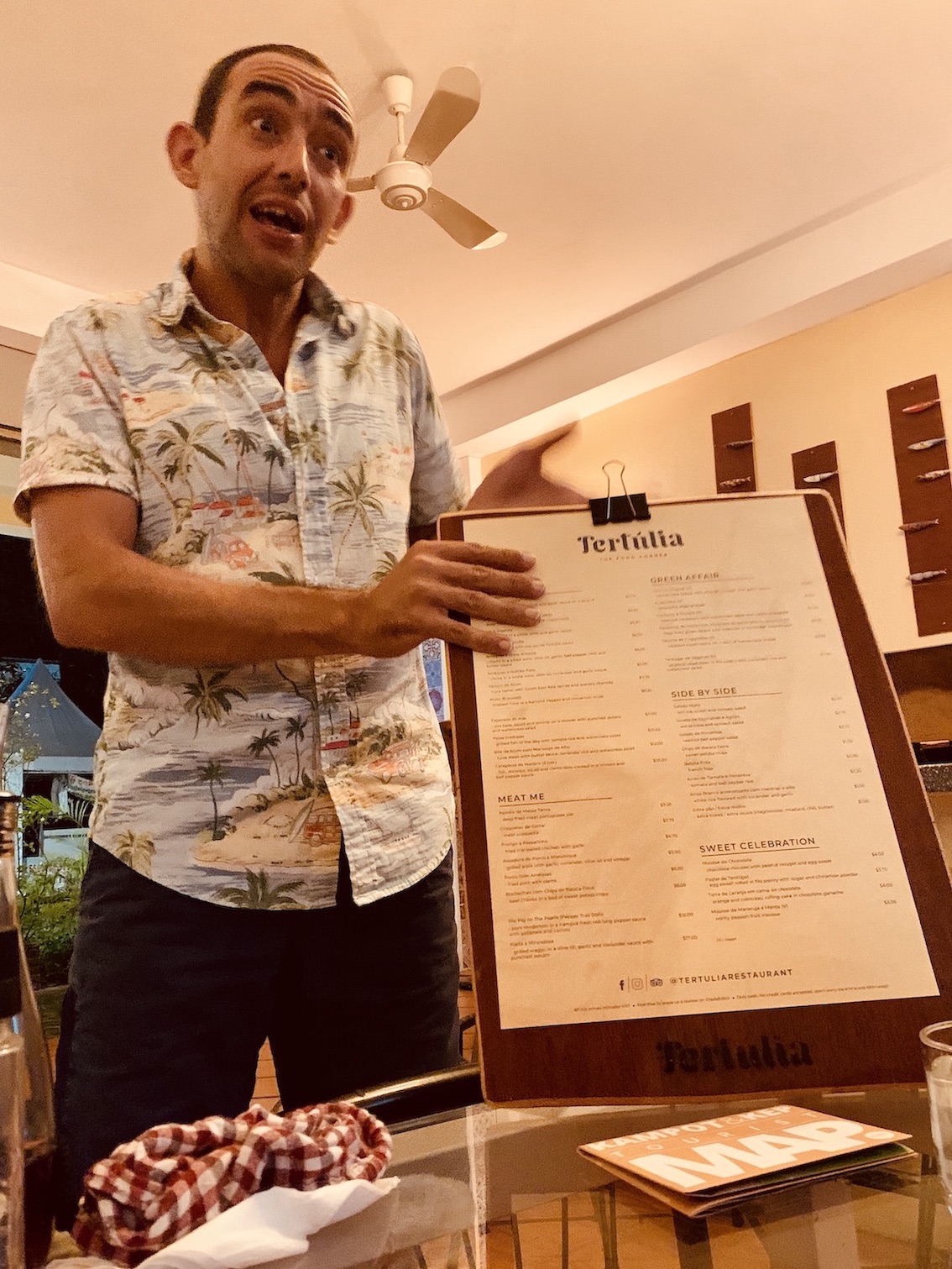 Miguel certainly made us feel at home that evening. Talking us through the menu, he explained how Tertulia is all about simple, fresh, Portuguese influenced dishes. “Plenty of olive oil, garlic, coriander… and lots of love!” he declared. 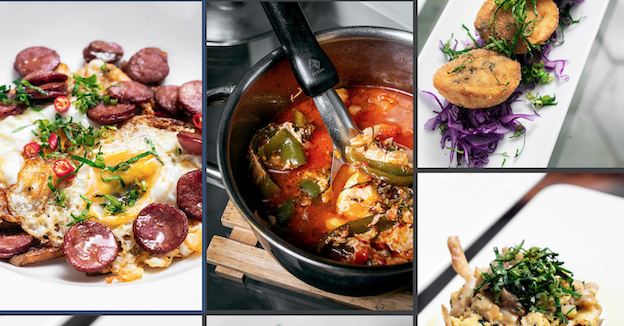 Having ordered a bunch of dishes, Sladja and I were left privately congratulating Miguel and Carolina on their decision to keep the restaurant’s name. I had never heard of Tertulia, a Portuguese word which describes “a social gathering with literary or artistic overtones”. 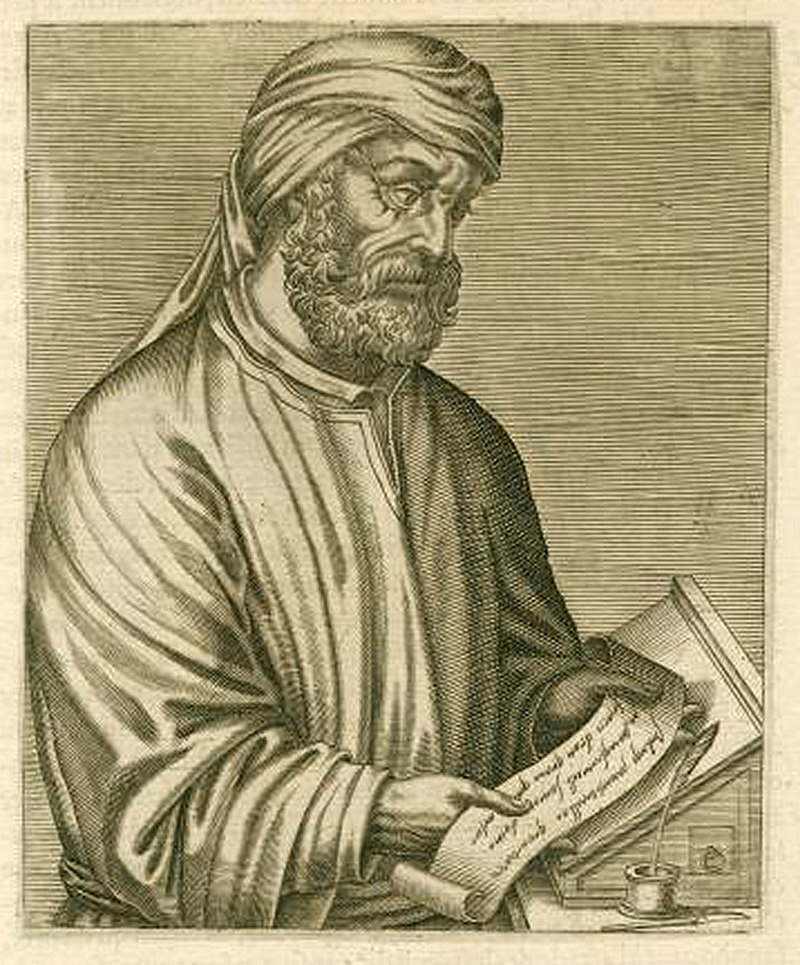 The word dates back to the 16th century when King Philip II of Spain began holding get togethers to discuss the works of the great writers, poets, playwrights and thinkers. One of his favourite topics was the revered writer Quintus Septimius Florens Tertullian, known as “the father of Latin Christianity”. 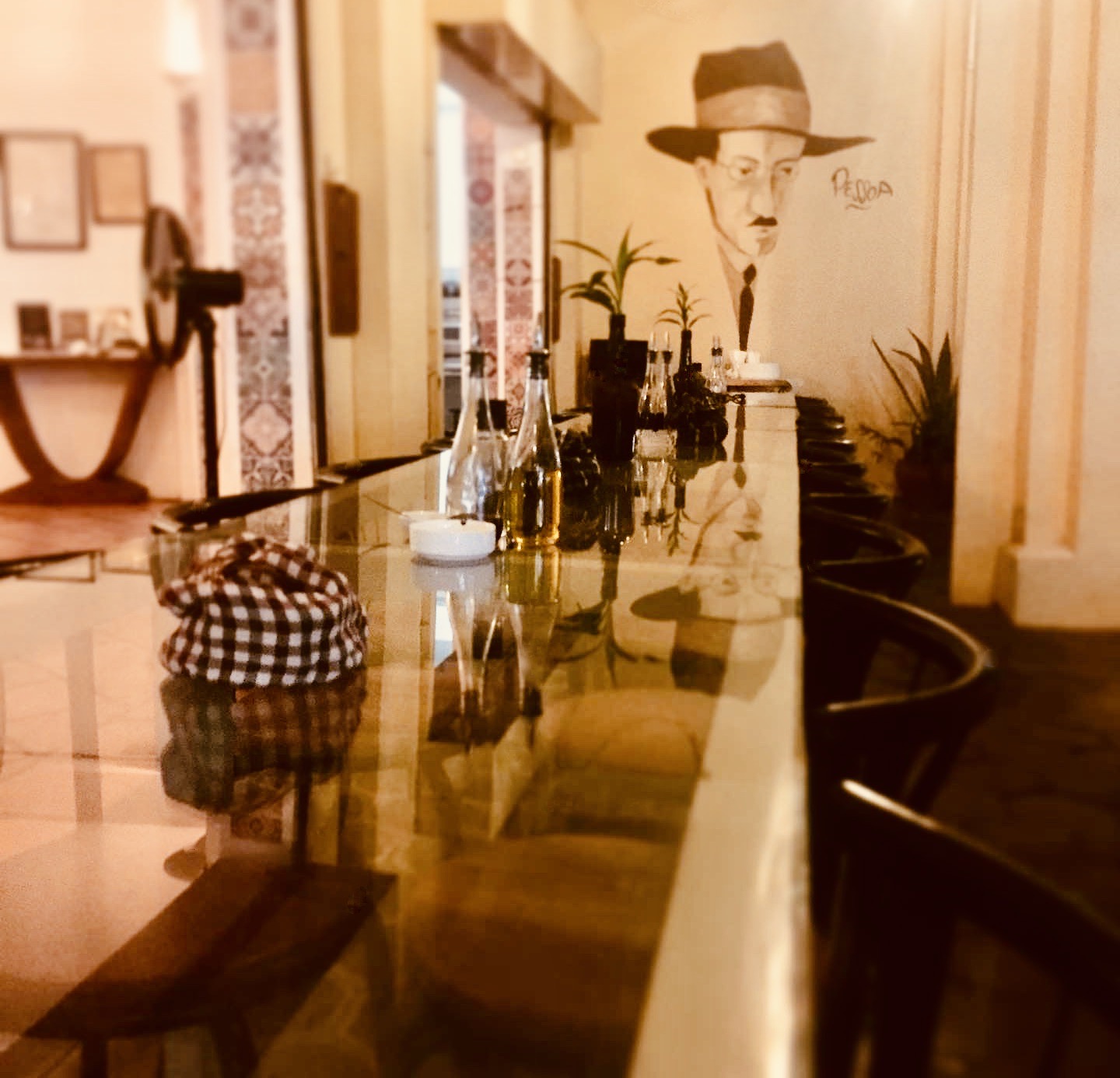 With this in mind, it’s impossible to ignore Tertulia Restaurant’s large mural of Fernando Pessoa. Born in Lisbon in 1935, Pessoa packed a lot into his forty seven years.

As a talented writer, literary critic, translator, philosopher and publisher, he eventually became one of the most significant literary figures of the twentieth century. Unfortunately, he was also a prolific drinker, which proved directly responsible for his premature demise. 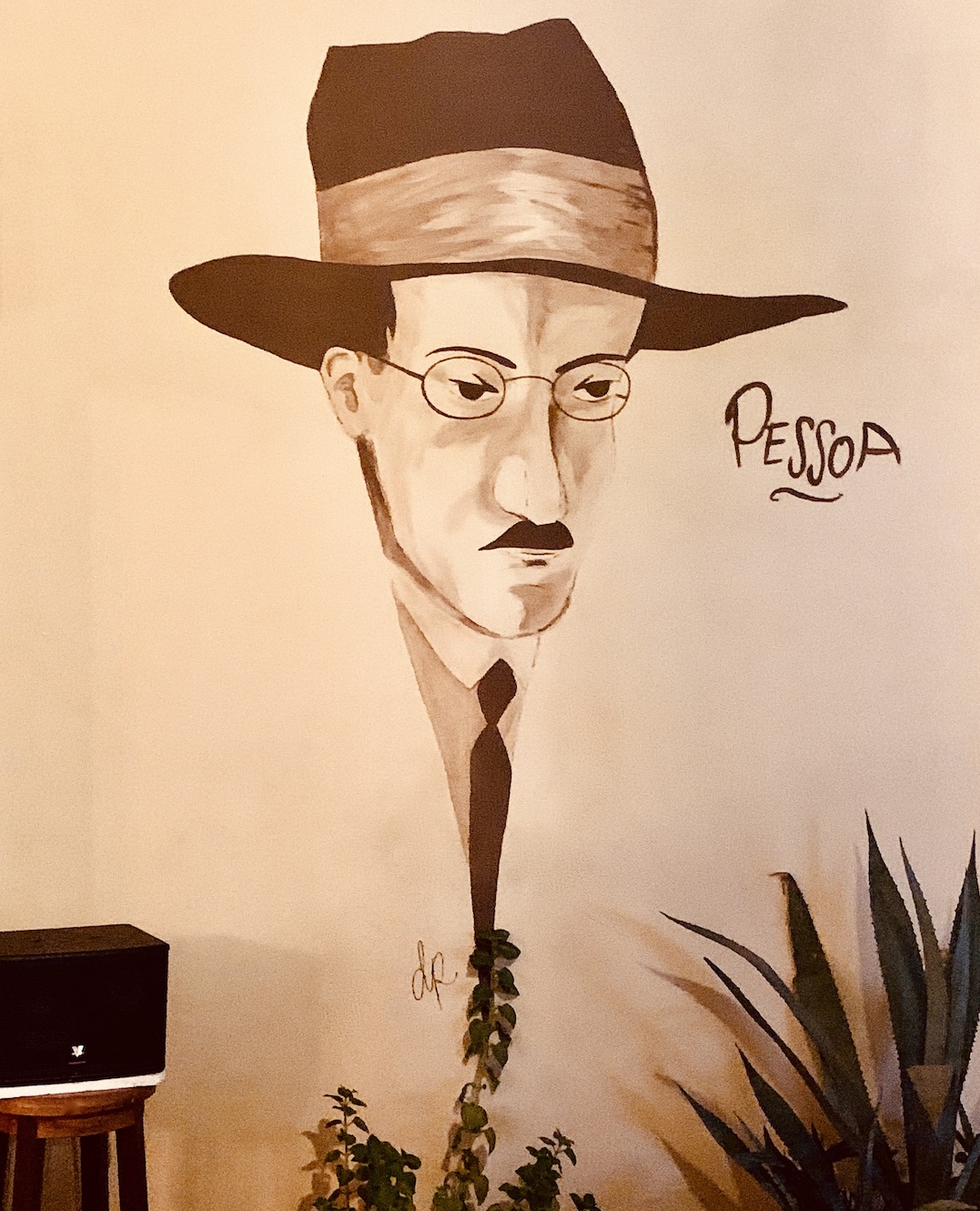 Happily, Tertulia has the substance to match its excellent sense of style. Everything we ate that night was absolutely delicious, starting with a bowl of Salada de Pimentos, a roasted bell pepper salad with fresh bread.

Next came the Peixe Grelhado, a perfectly smoky and tender portion of sea bass, served with tomato rice and watercress salad.

Last but not least, we polished off a tray of Pastéis de Massa Tenra, a deep fried Portuguese meat pie. Crispy on the outside, soft and juicy on the inside, this was my favourite dish of the evening. 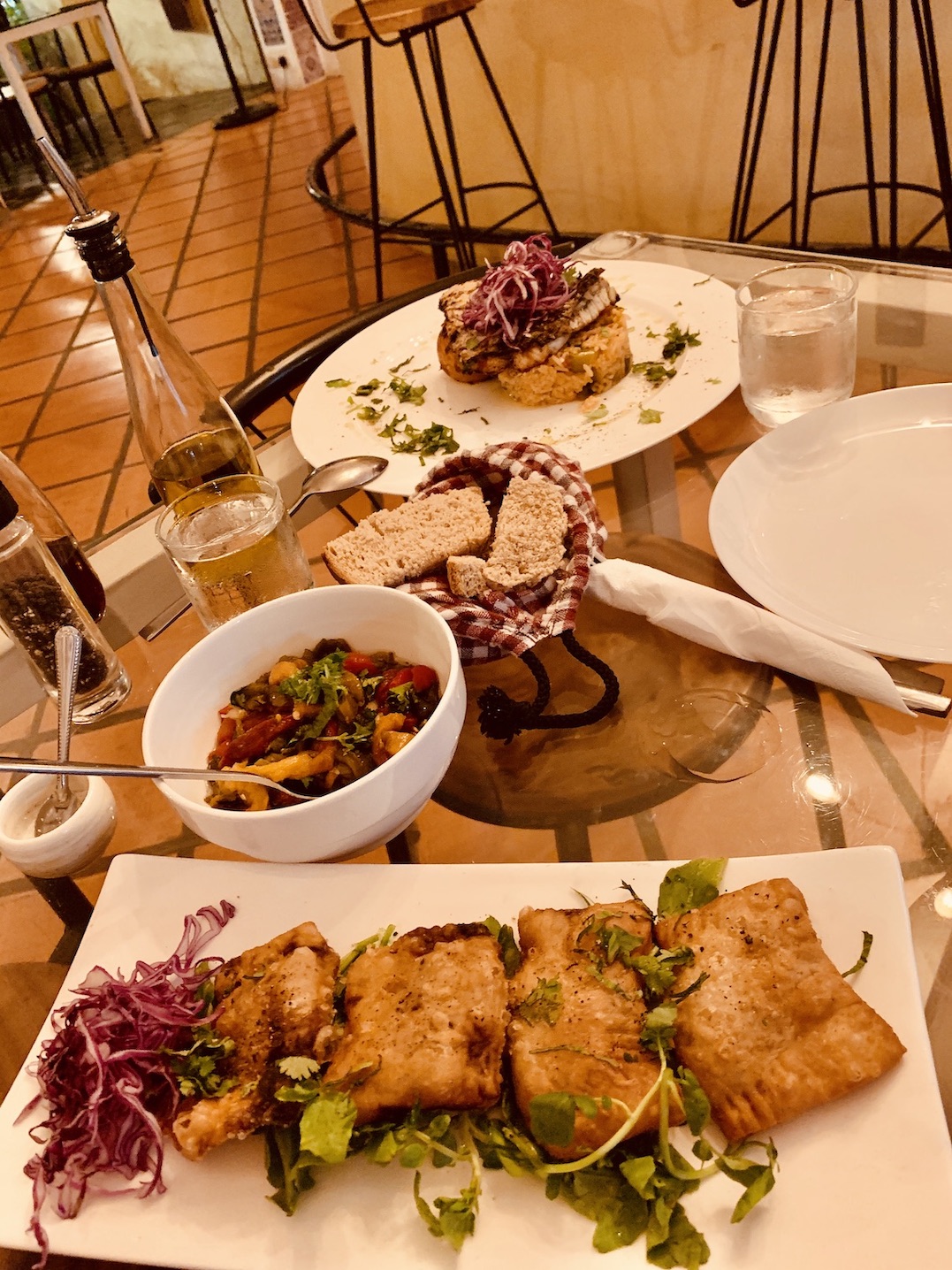 Amusingly, our dinner smelled so damn good it even attracted a neighbourhood cat. After circling us for a bit and even attempting to jump up onto our table, he finally installed himself under the glass tabletop. And there he sat, glaring up at us with envious eyes. “I am so sorry!” laughed Miguel nervously. “It’s the fish, he just loses his mind for that sea bass!” 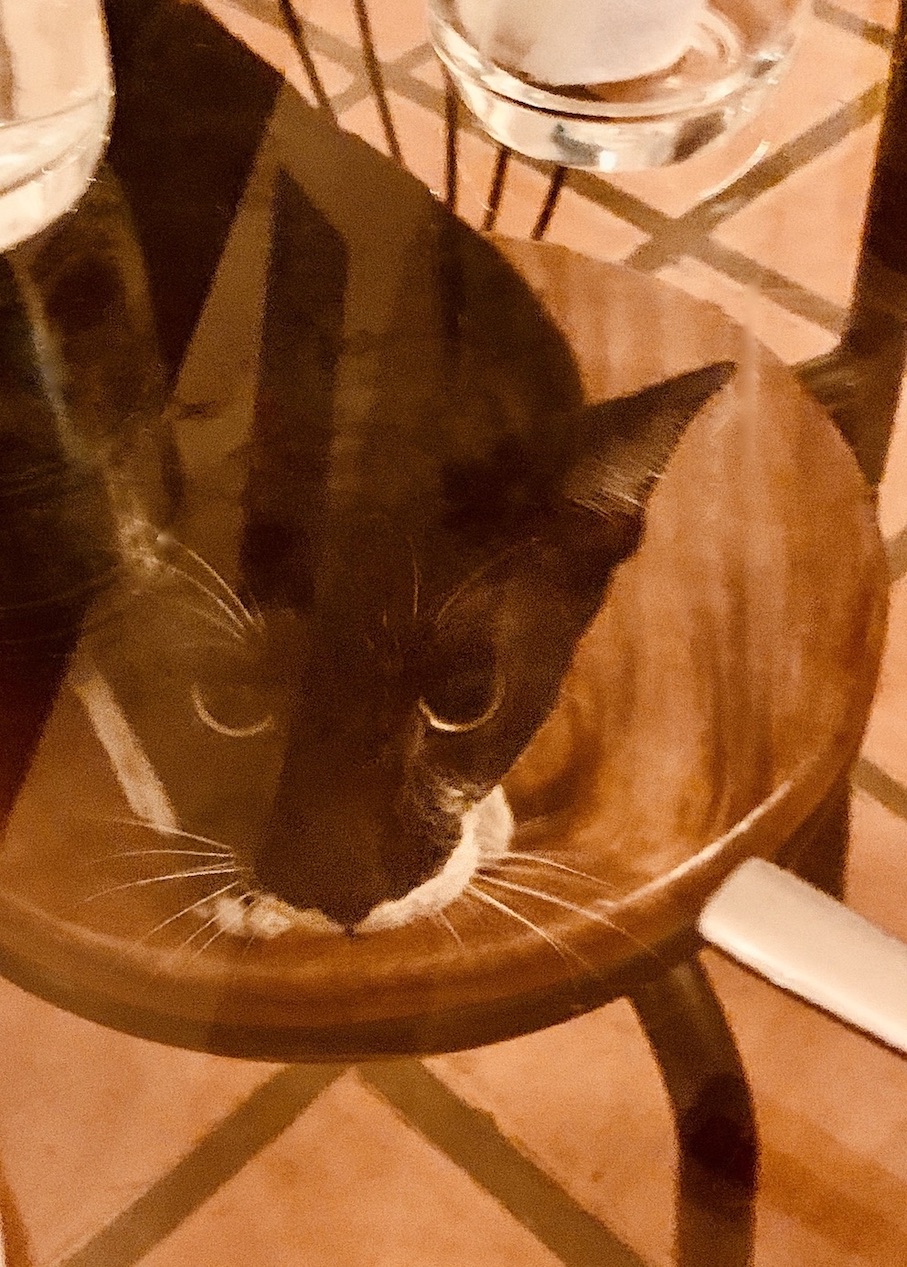 “Are you done with your fish?”

After dinner, Sladja and I kicked back with some drinks. Miguel and Carolina have a selection of Portuguese wines, including red, white, rosé  and Vinho Verde. Perfect for an extended spell of lingering. And, in true Tertulia style, for discussing our recent explorations into the filmography of Sir Ridley Scott. 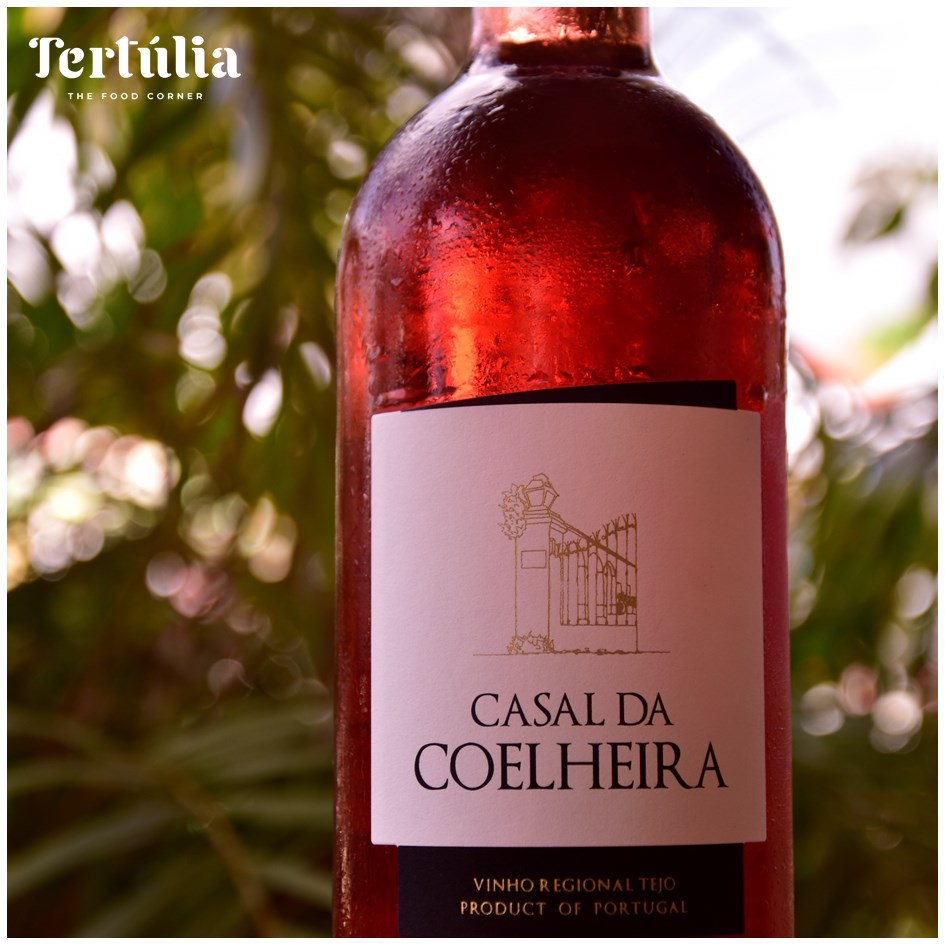 Moreover, Miguel gave us an excellent overview of Kampot’s food and drink scene, along with some solid recommendations. Carolina also pointed us in the direction of some of our favourite sights, such as (the already reviewed) Nibi Spa. 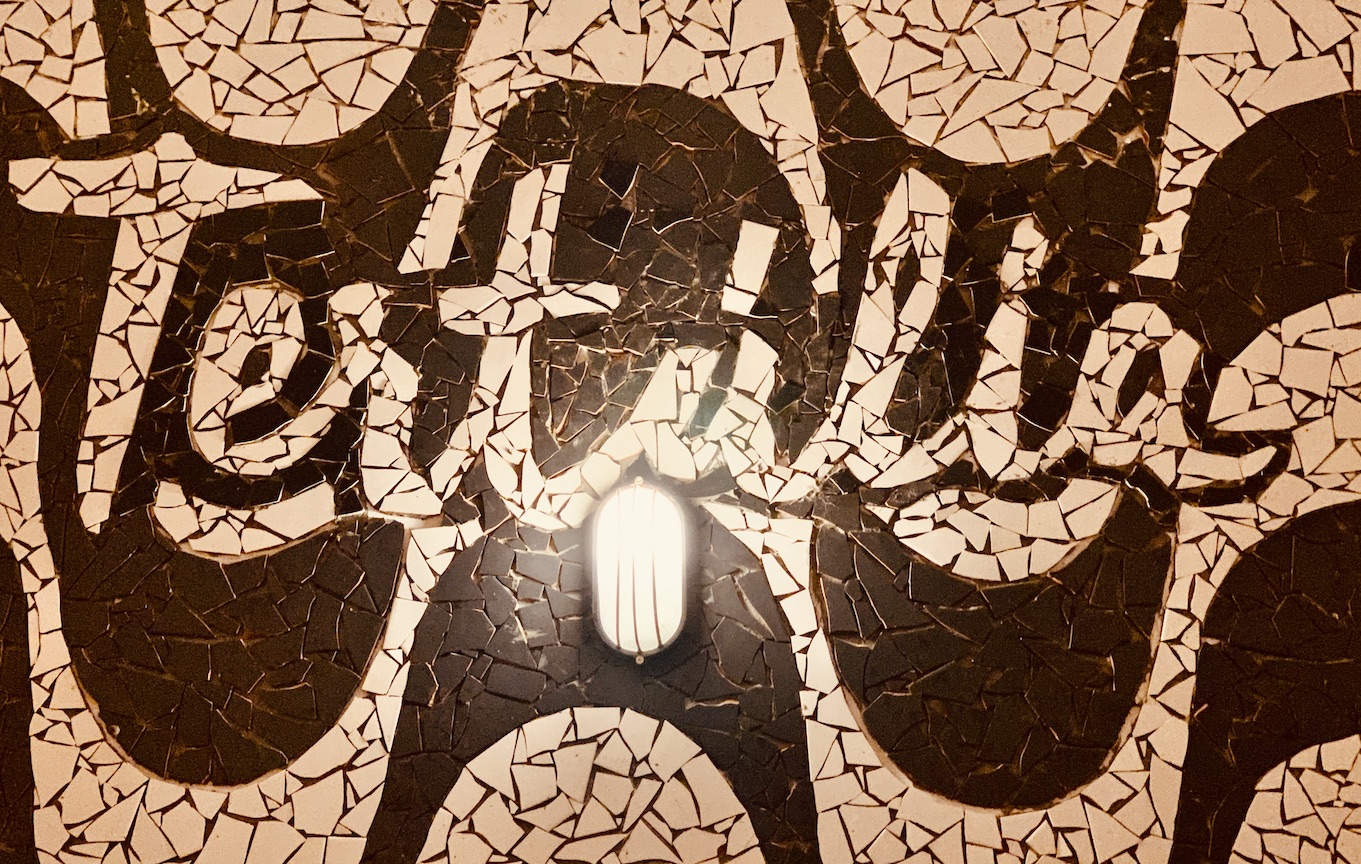 I’m so glad we stumbled upon Tertulia on our first night in Kampot. What’s more, I’m delighted to hear that, unlike some of the cafes and restaurants we went to in Cambodia, they have made it through the pandemic.

Even more encouraging is the news that they’re about to open their second restaurant in Phnom Penh, the Cambodian capital. For this, and everything else, we wish Miguel and Carolina all the best! For the latest news and their full menu, check out Tertulia’s Facebook page.