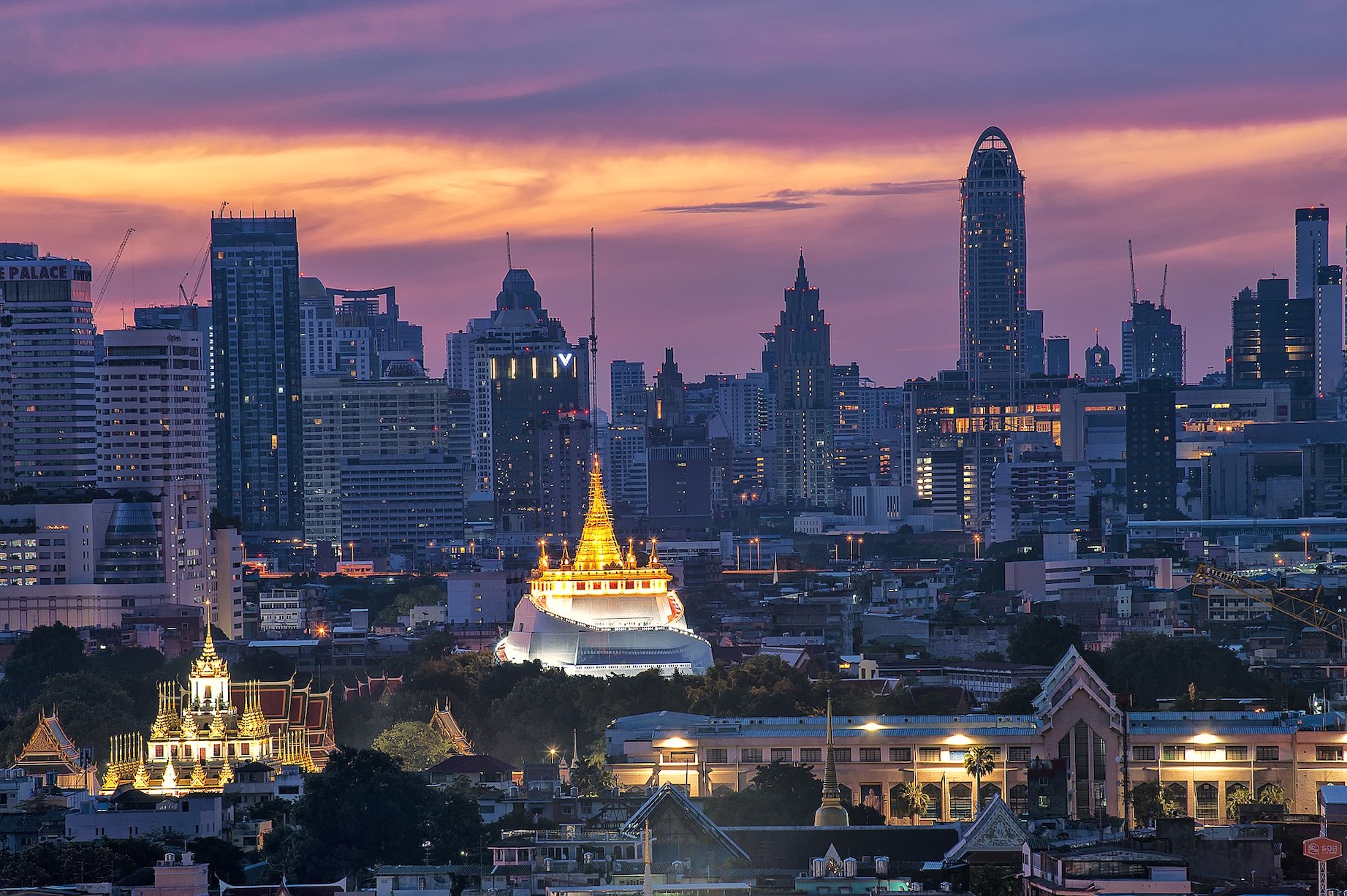 Another day in Bangkok, another expedition to see one of Thailand’s most notable Buddhist temples. Despite visiting around a dozen during my time in the Thai capital, I couldn’t say any of them had come with killer city views. Which is why I was so keen to add Wat Saket to my collection. Originally built in 1487, this small and largely unremarkable temple sat for centuries enjoying little historical consequence. 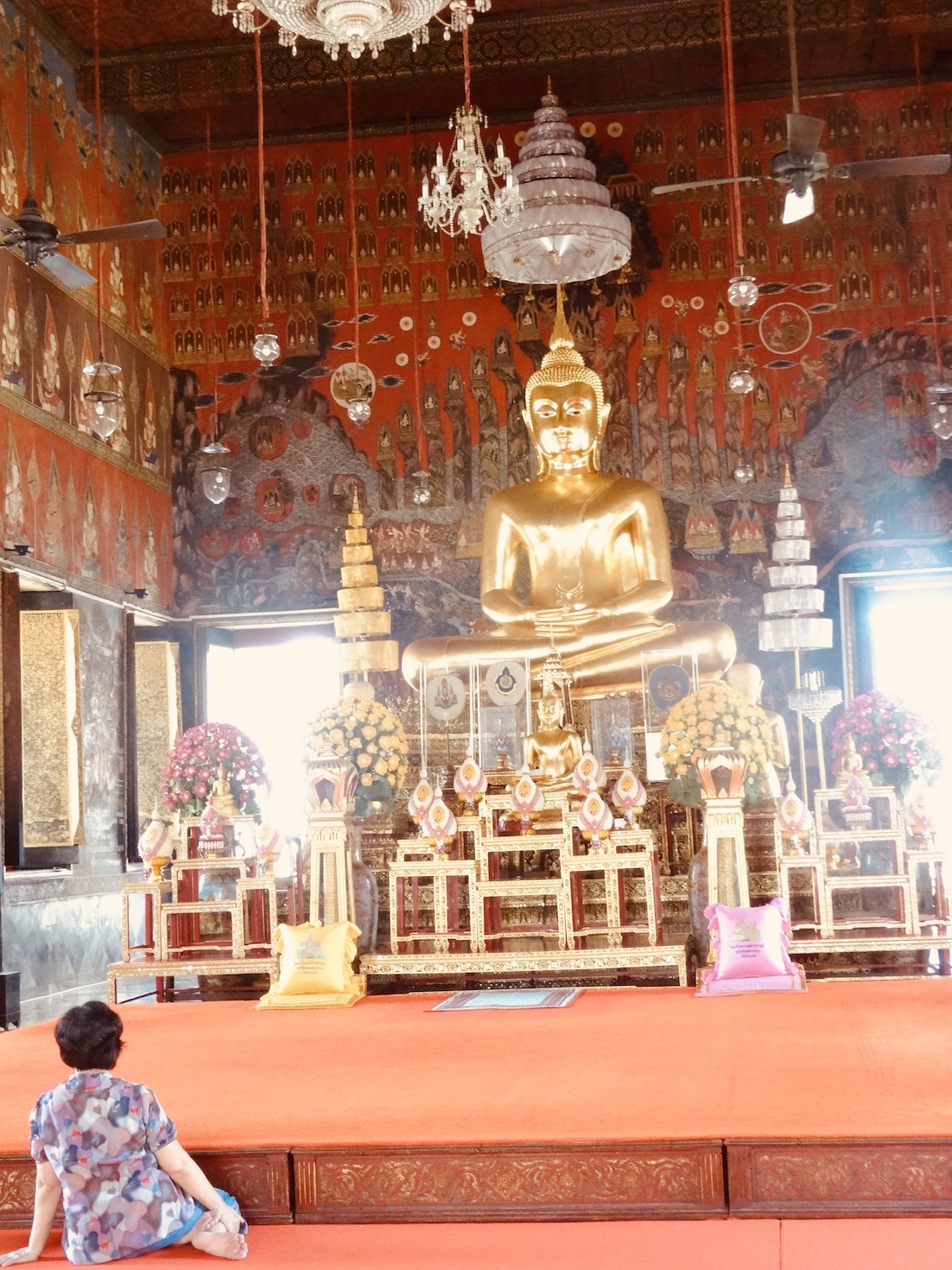 But the temple’s fortunes blossomed in the mid 1700s when, according to legend, King Rama I made an unexpected stop here while returning to Bangkok from Chiang Mai. Tired and dishevelled, he simply wanted to pray, rest and wash his hair. Thus the temple earned itself the name, Wat Sakae, which roughly translates as “wash hair”. 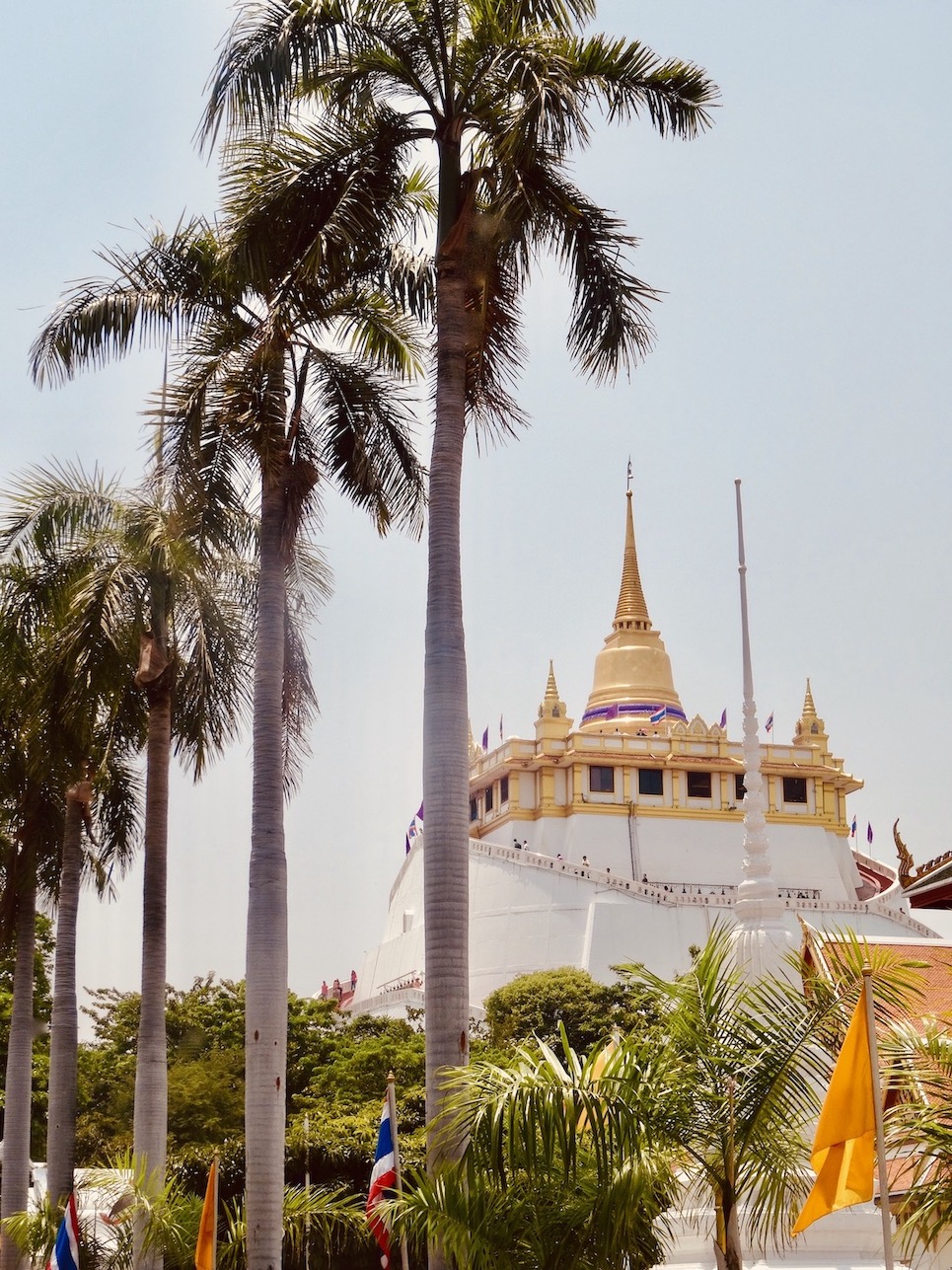 In honour of his grandfather’s famous visit, King Rama III decided to build a towering chedi within the temple grounds in 1820. However, its construction was ill-conceived and sloppy, leading to a complete collapse. The resulting mound of mud, brick and overgrown weeds eventually led locals to call it phu khao (mountain). 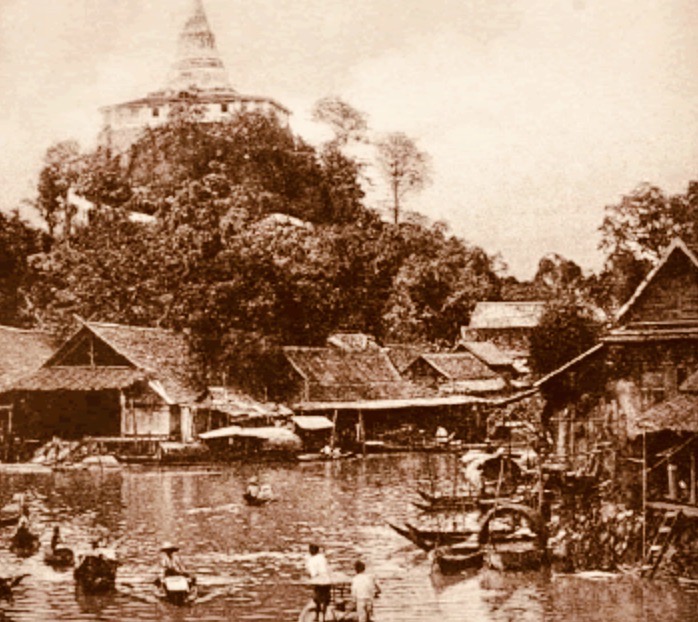 Finally, a combination of efforts from kings Rama IV and Rama V saw the long-awaited chedi come to completion. Finished in 1869, the 5.8 metre structure sat proudly atop a new 80 metre hill. At that time the highest point in the city, thousands of people from across Bangkok and beyond flocked to the temple to see its grand new addition. And they called it The Golden Mount. 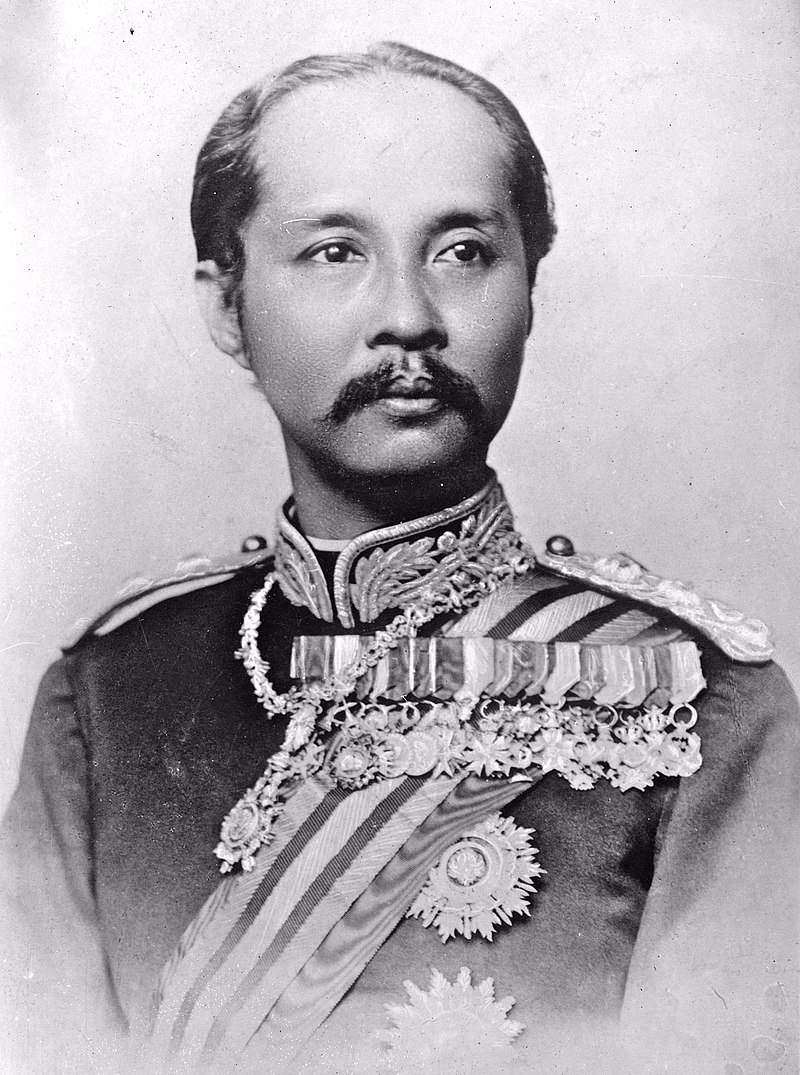 In order to beautify the path leading up to the chedi, local authorities added surrounding walls in the mid 1940s. Moreover, they lined the approach with a series of bronze bells. Most Thais visiting the complex take the time to stop and ring each one, a Buddhist tradition said to bring good luck. 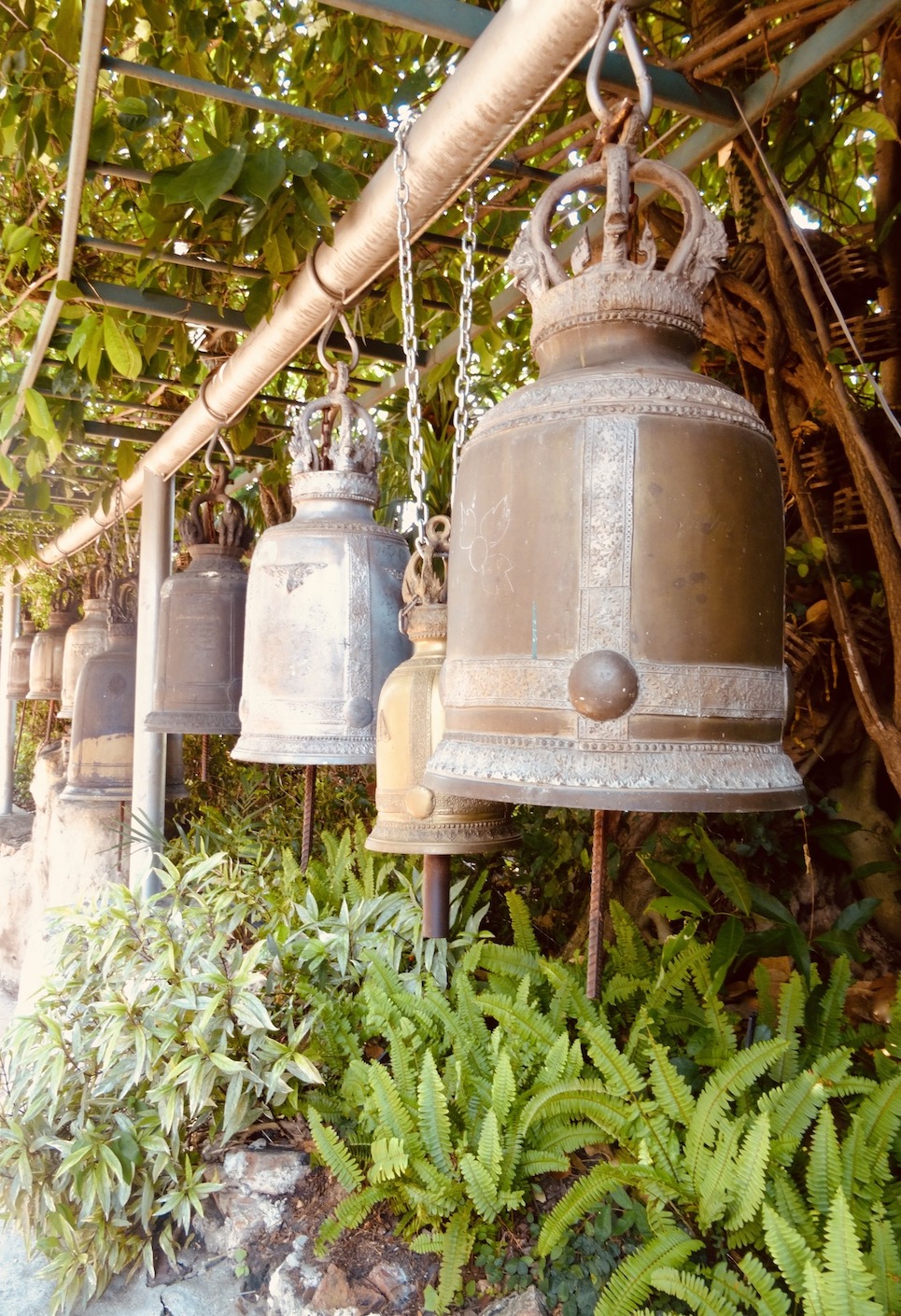 It’s also good form to clang the giant metal gong. You can literally hear it ringing out across the surrounding streets as you approach the complex. 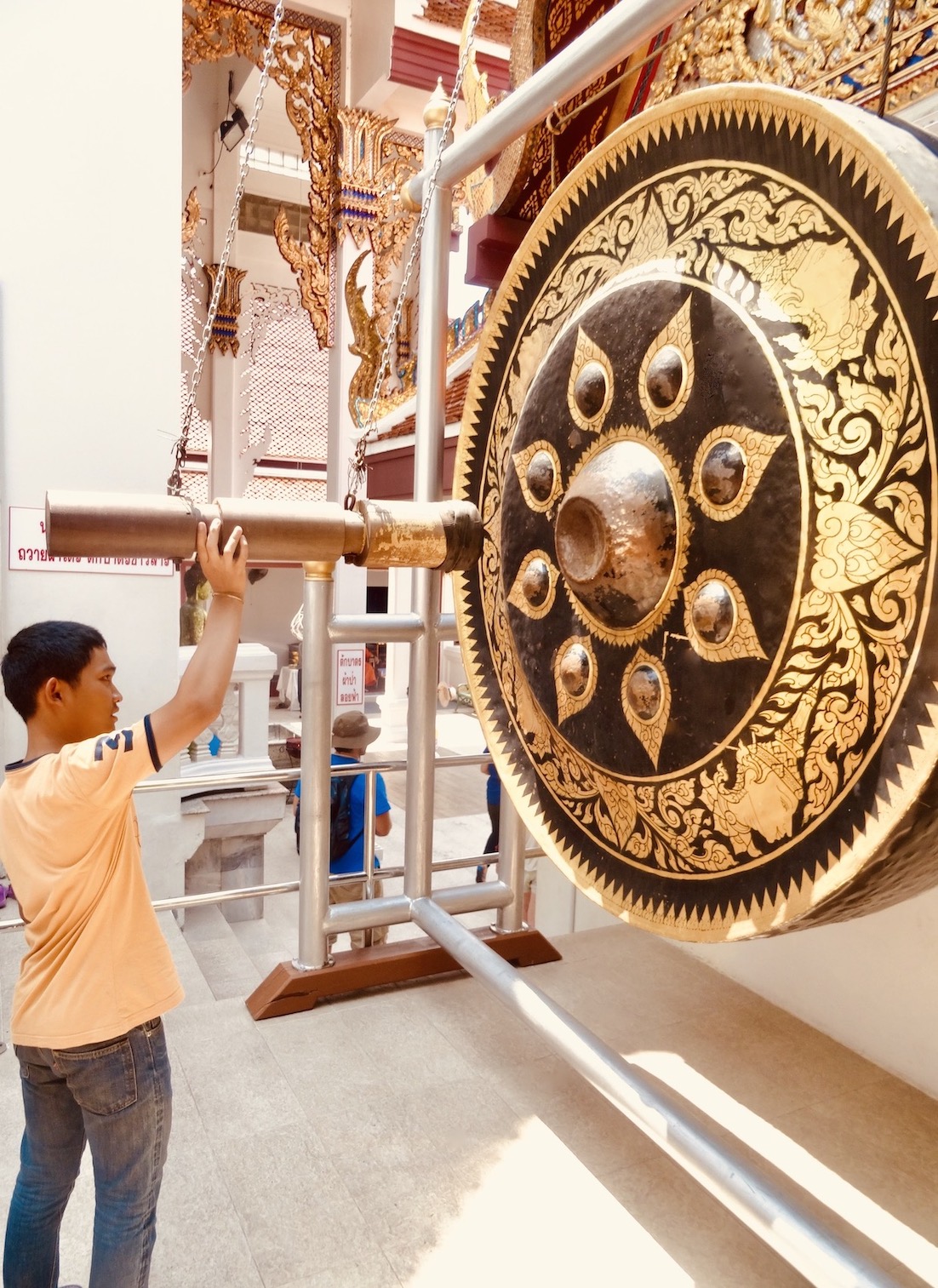 A number of grisly statues commemorate the site’s history as a cremation centre for Bangkok’s poor and diseased. Oddly, those who managed the cremations allowed the local vultures to feast on the bodies before processing. This was due to the belief that being eaten by an animal before cremation gave one a better chance of a fortunate rebirth! 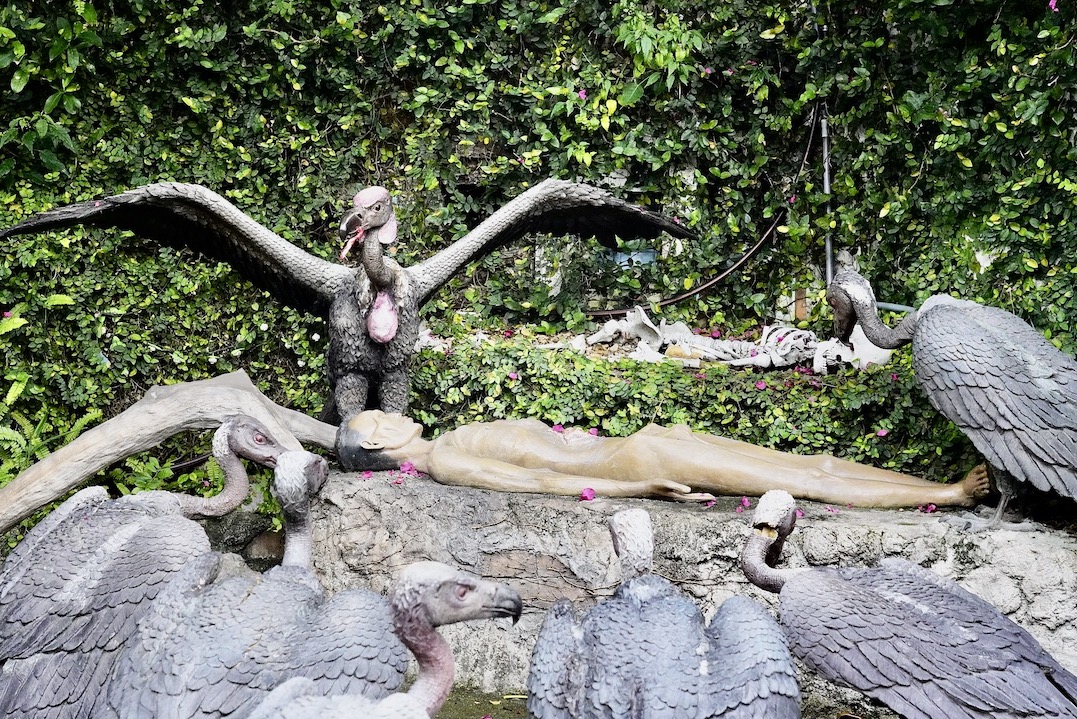 The vultures played an even bigger part of the operation during the devastating cholera pandemic of 1820. Before long, the cremation centre at Wat Saket found itself overwhelmed with bodies. Unable to cope with the spiralling numbers, the monks could only look on as the vultures stepped in to take care of those carcasses they didn’t get round to burning. 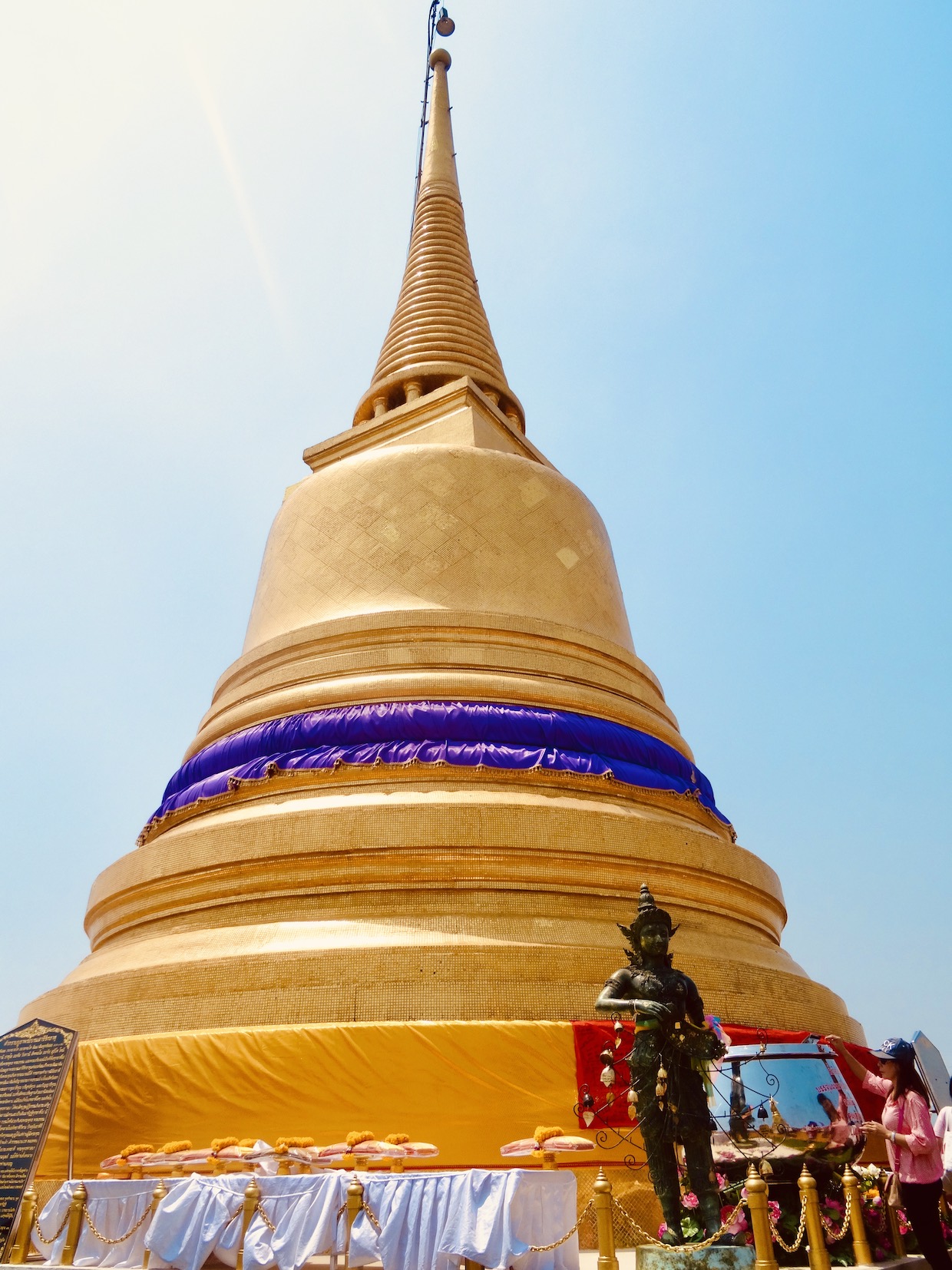 Emerging onto the main balcony, I finally came face to face with The Golden Mount’s famous chedi. Shielding my eyes from the shimmering effects of the afternoon sunshine, I did the short three hundred and sixty degree loop, admiring the various Buddha guardians. Most are ancient statues brought over from India, while one located inside the chedi came from Sri Lanka in the late 1800s. 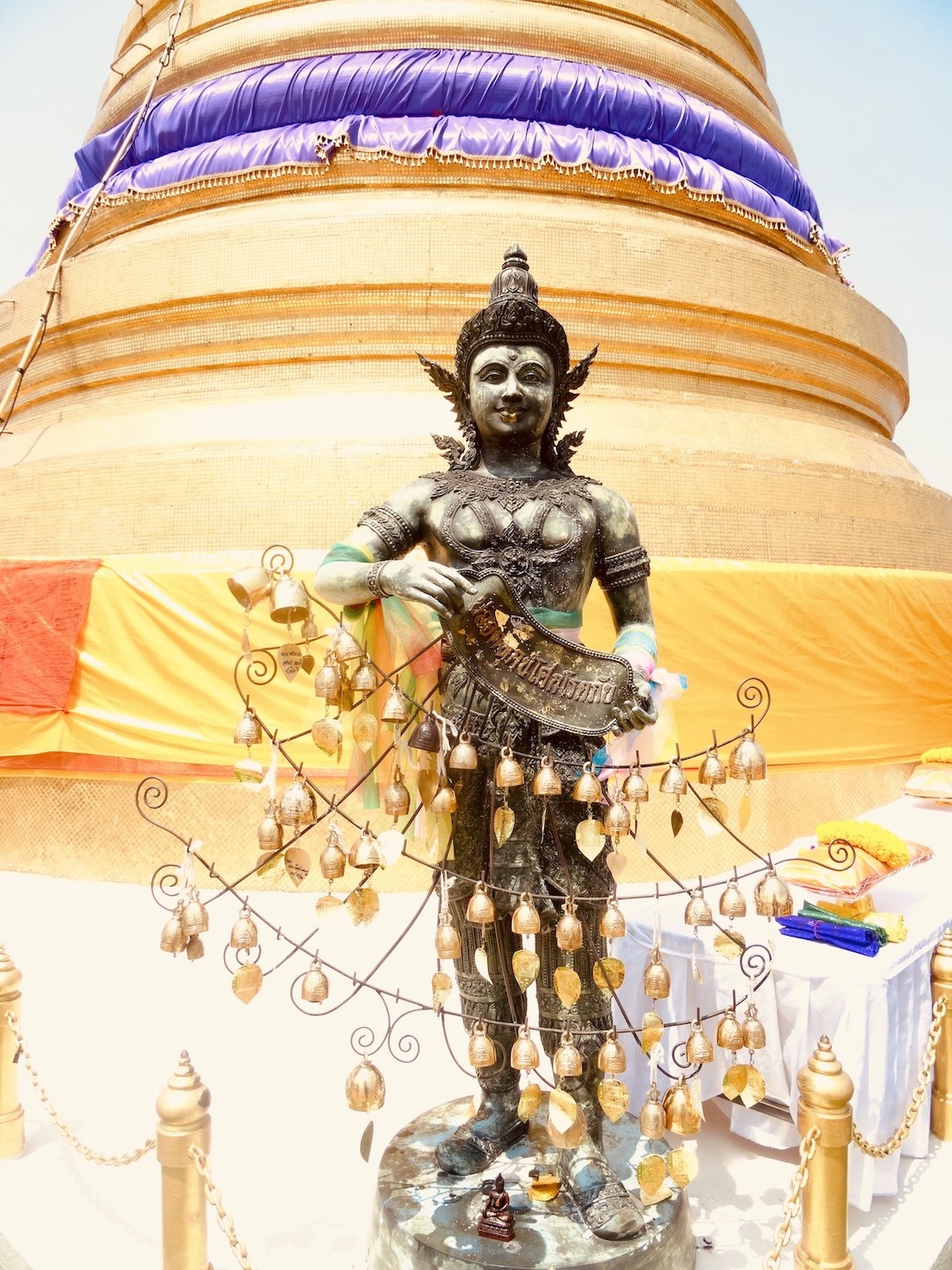 The balcony was a hive of activity that afternoon as more and more visitors streamed in all around me. Most Thais came bearing gifts of orange robes for Wat Saket’s resident monks. Neatly folded and wrapped in plastic coverings, each robe tray came topped by a necklace of fresh flowers. 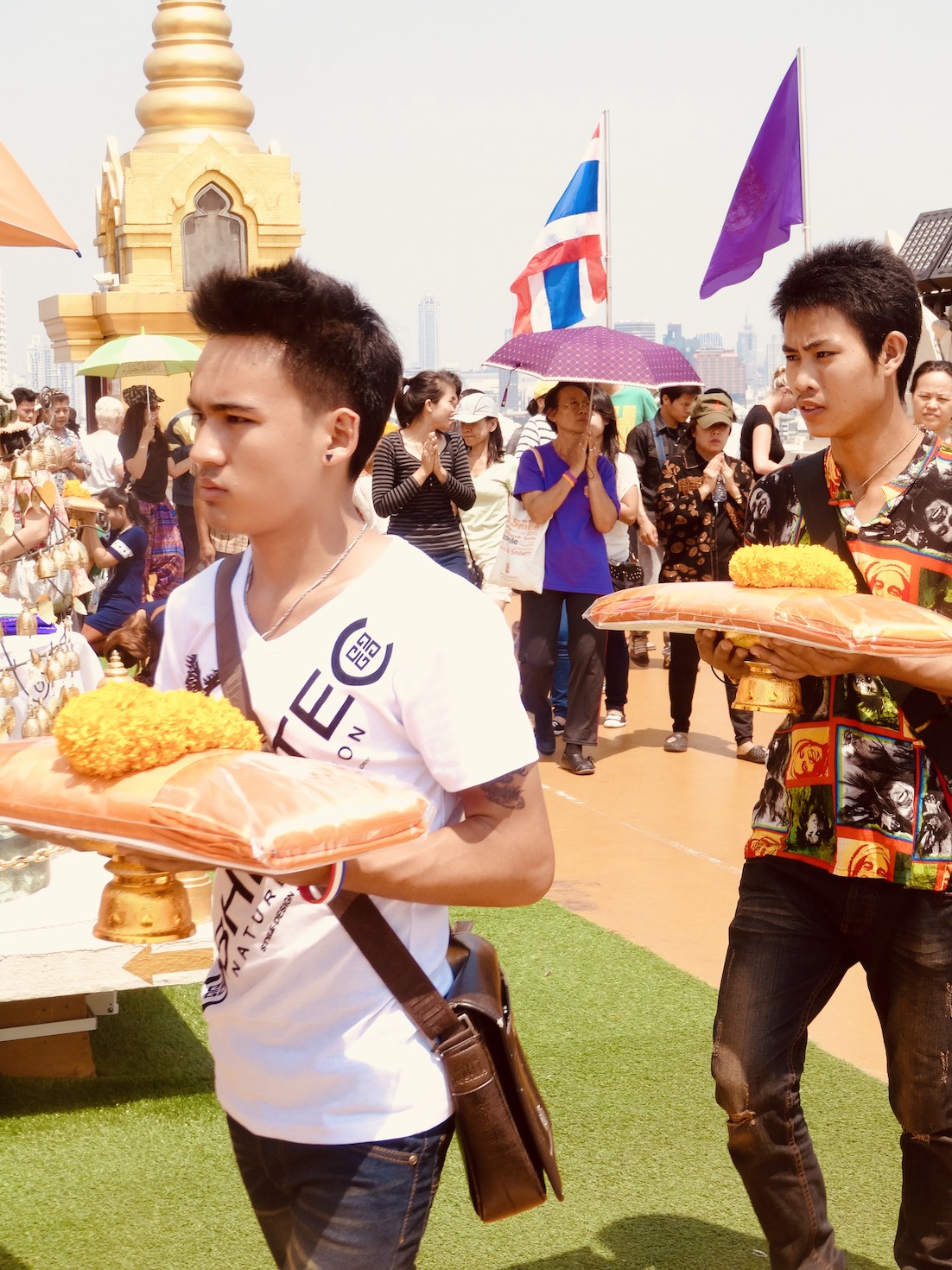 After laying down the robes, visitors add monetary donations at the foot of the chedi. And then leave written messages on what is essentially a giant, open air guestbook. Furthermore, it’s an opportunity for people to seek specific blessings for loved ones. 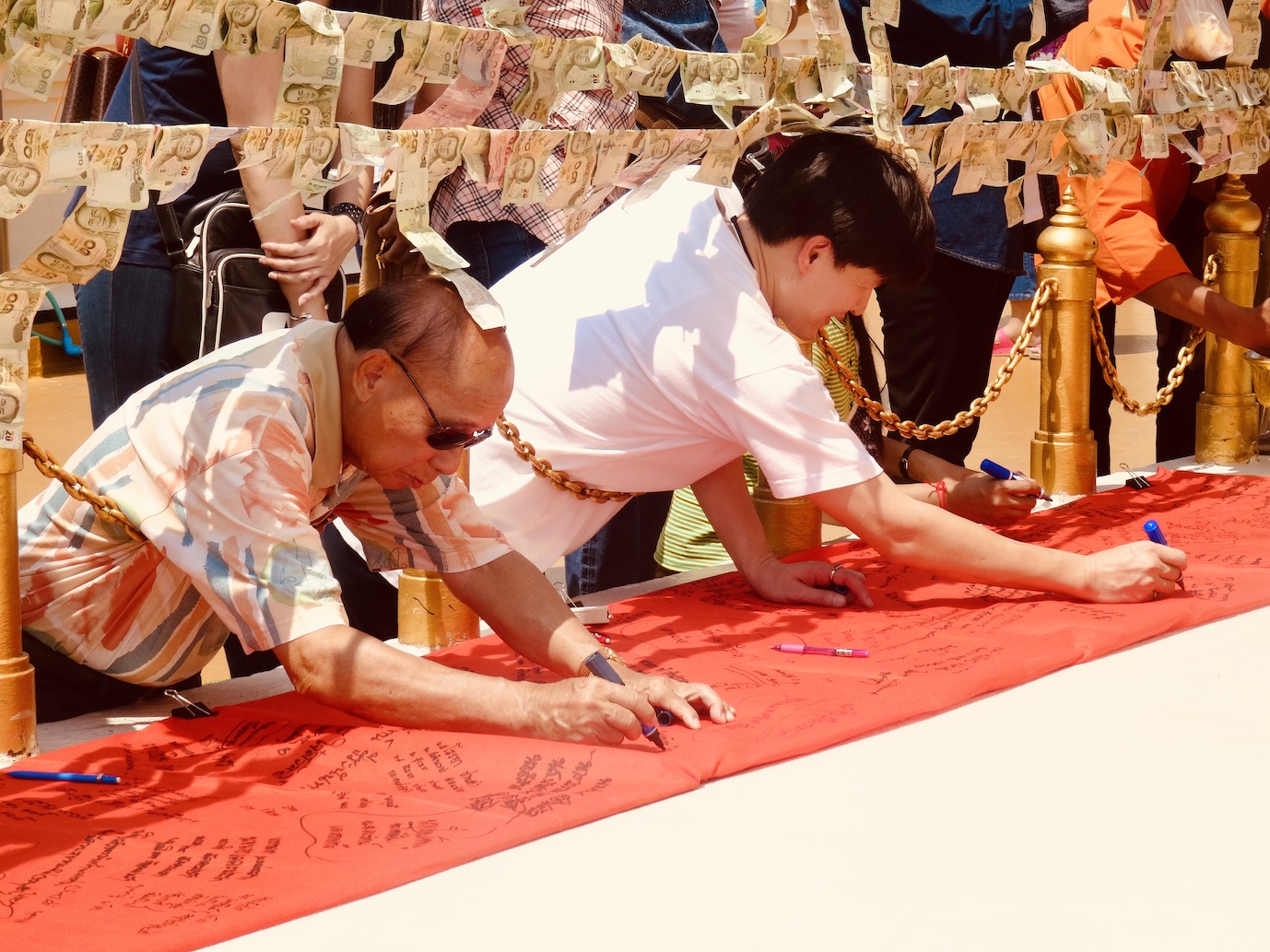 Last but not least, I hung out for a bit drinking in The Golden Mount’s lovely city views. That’s the Temple of The Emerald Buddha in the background to the left of my head. 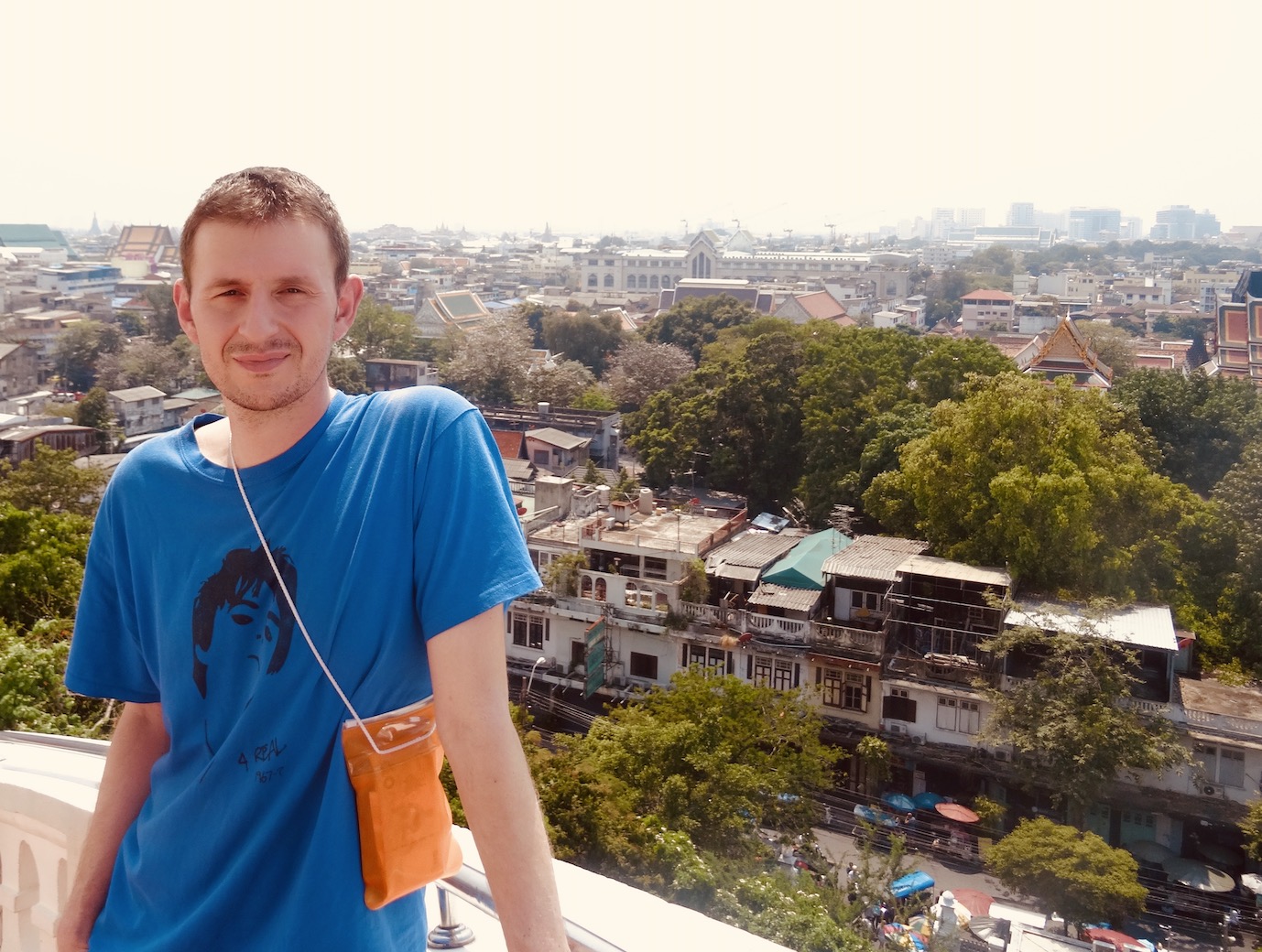 The view from atop The Golden Mount.

Wat Saket and its Golden Mount opens daily from 08:00-17:00. Entry is 50 Baht and while the dress code is usually not as strict as in many other Bangkok temples, you’d nevertheless be better off avoiding shorts, skirts and sleeveless tops. 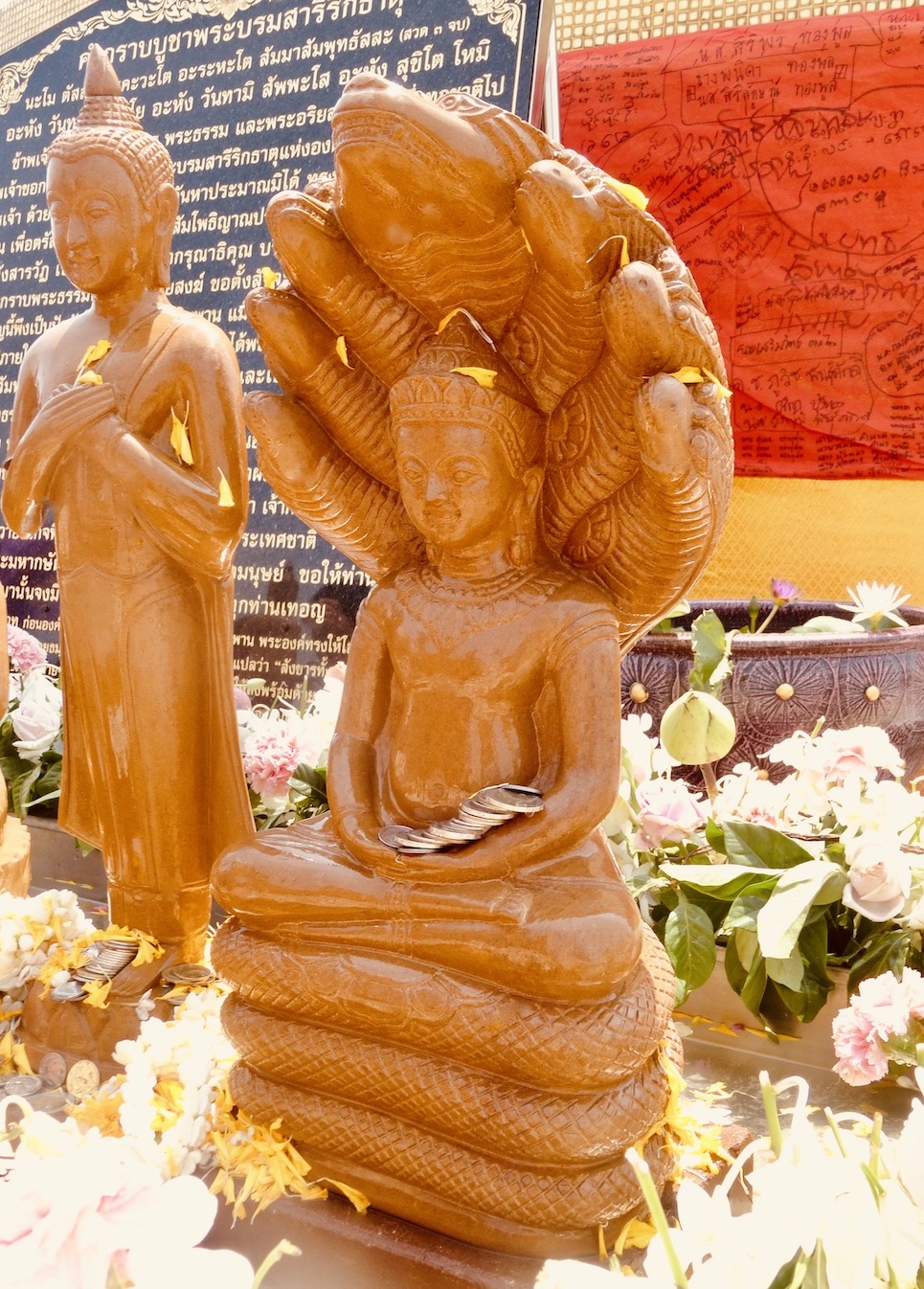