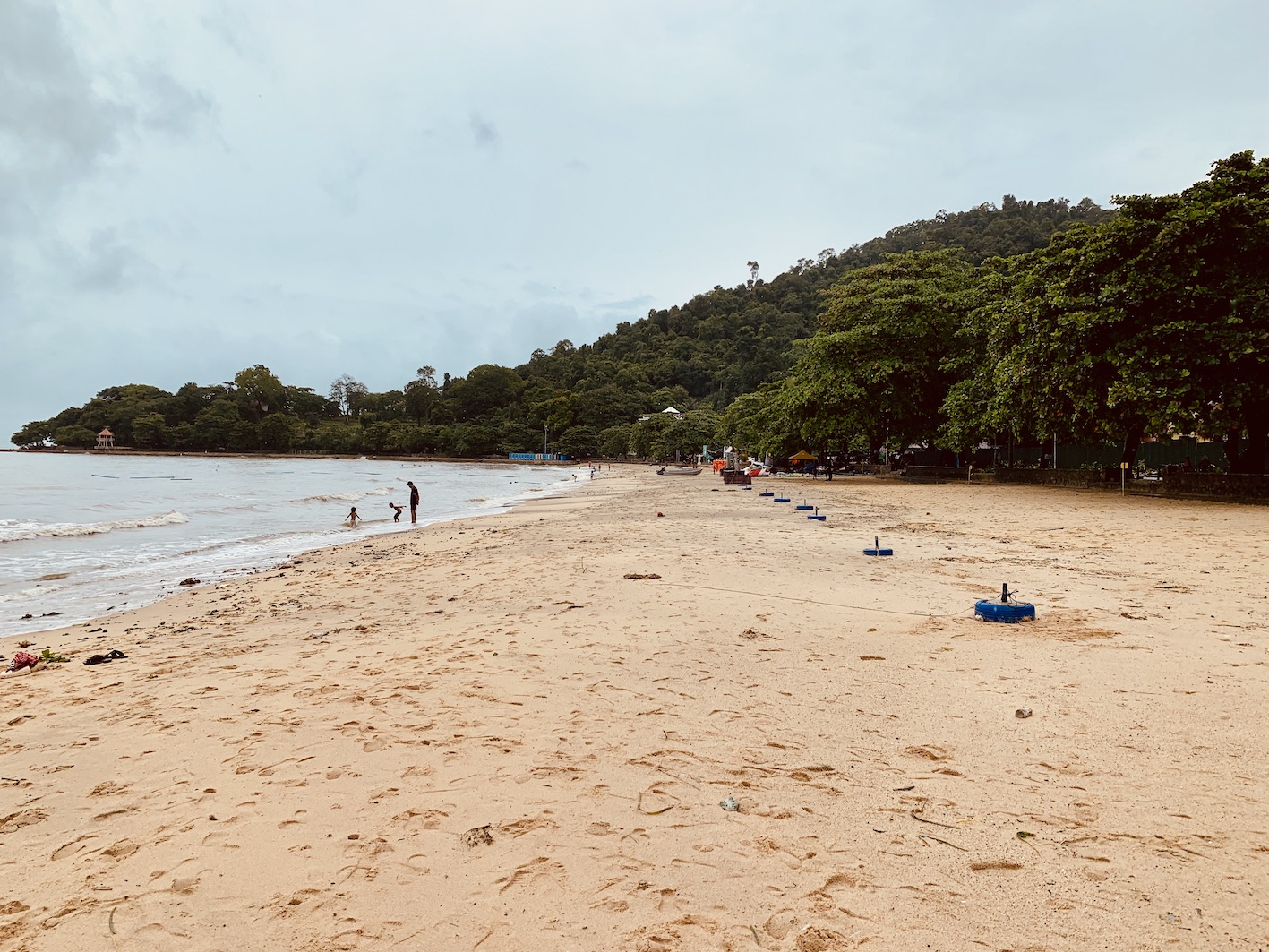 It was weird being back in Kep. As one of Cambodia’s sleepiest outposts, I’d read that very little has changed over the years. And so it proved. It had been just over four and a half years since Wonderboy and I landed here at the end of our cross-country Cambodia trip in 2015. The beach had been virtually deserted that day and it certainly felt great to have the sands to ourselves. 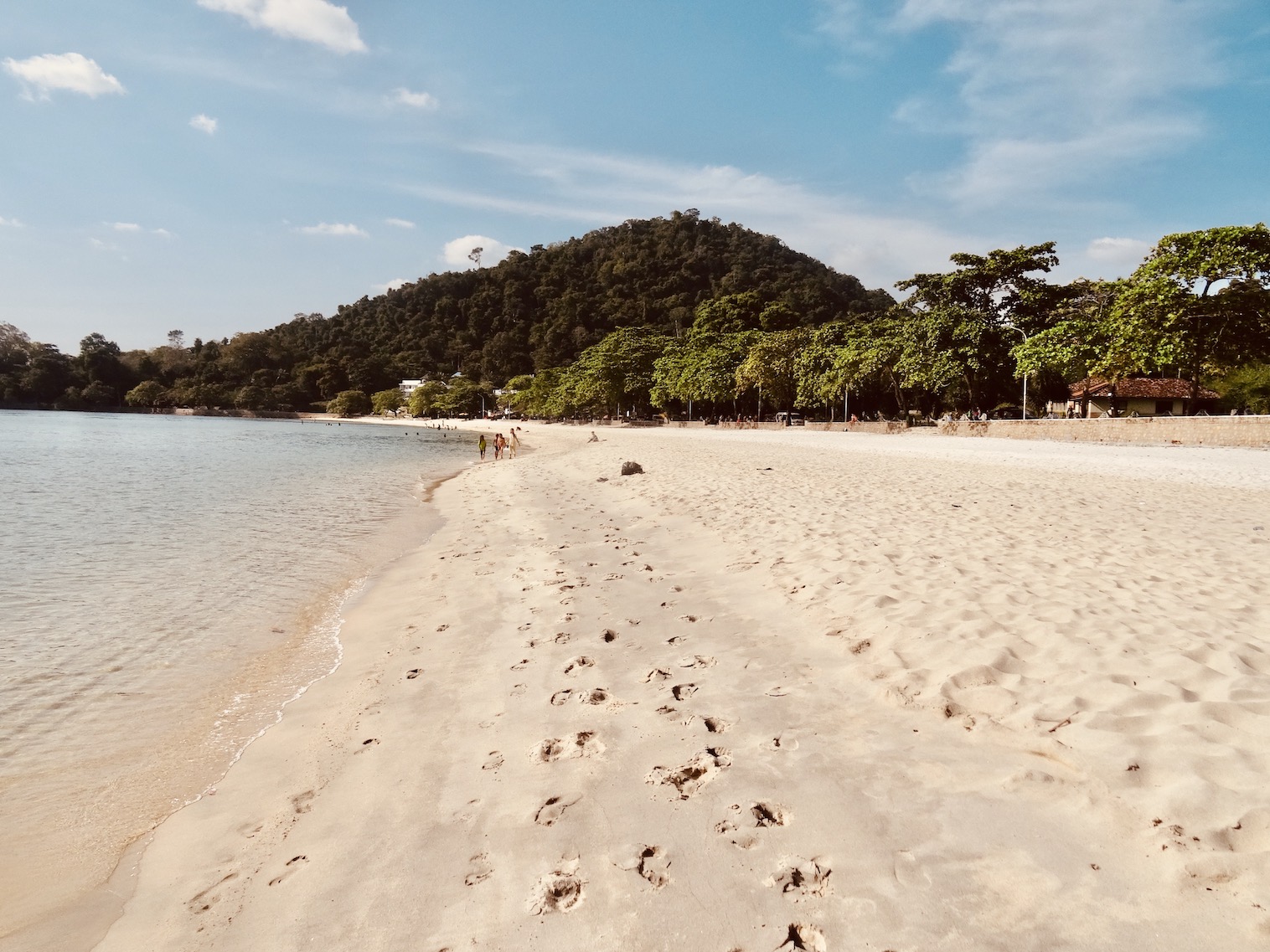 While hardly teeming, it was a little busier the day I returned with Sladja. The weather was overcast and the sky, getting darker by the minute, seemed intent on edging itself into a state of brooding.

“Such a tiny beach” smiled Sladja as we approached from the grubby, litter-strewn sidewalk. Nearby, a young Khmer man stared out to sea, somewhere beyond the pockets of families frolicking by the shoreline. In fact, there was something about his sad expression that perfectly encapsulated Kep and its unfortunate history. 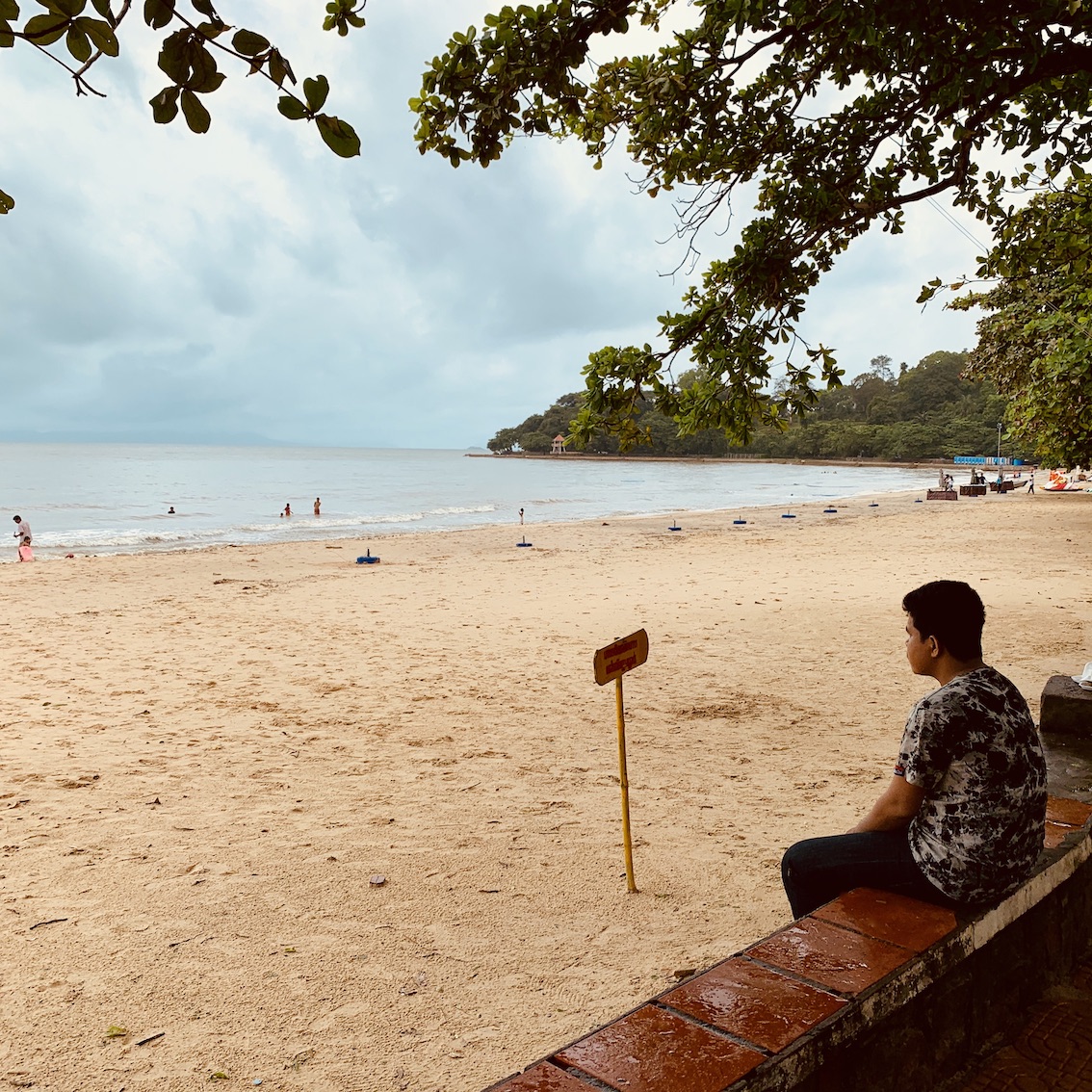 Although a community of some kind had resided here for hundreds of years, it wasn’t until 1908 that this little town began to flourish. This was when the French established a hill station for wealthy bureaucrats and their families.

They called it Kep-Sur-Mer, a playground where the country’s high rollers could come to party and rest, away from the unbearable heat of Phnom Penh. 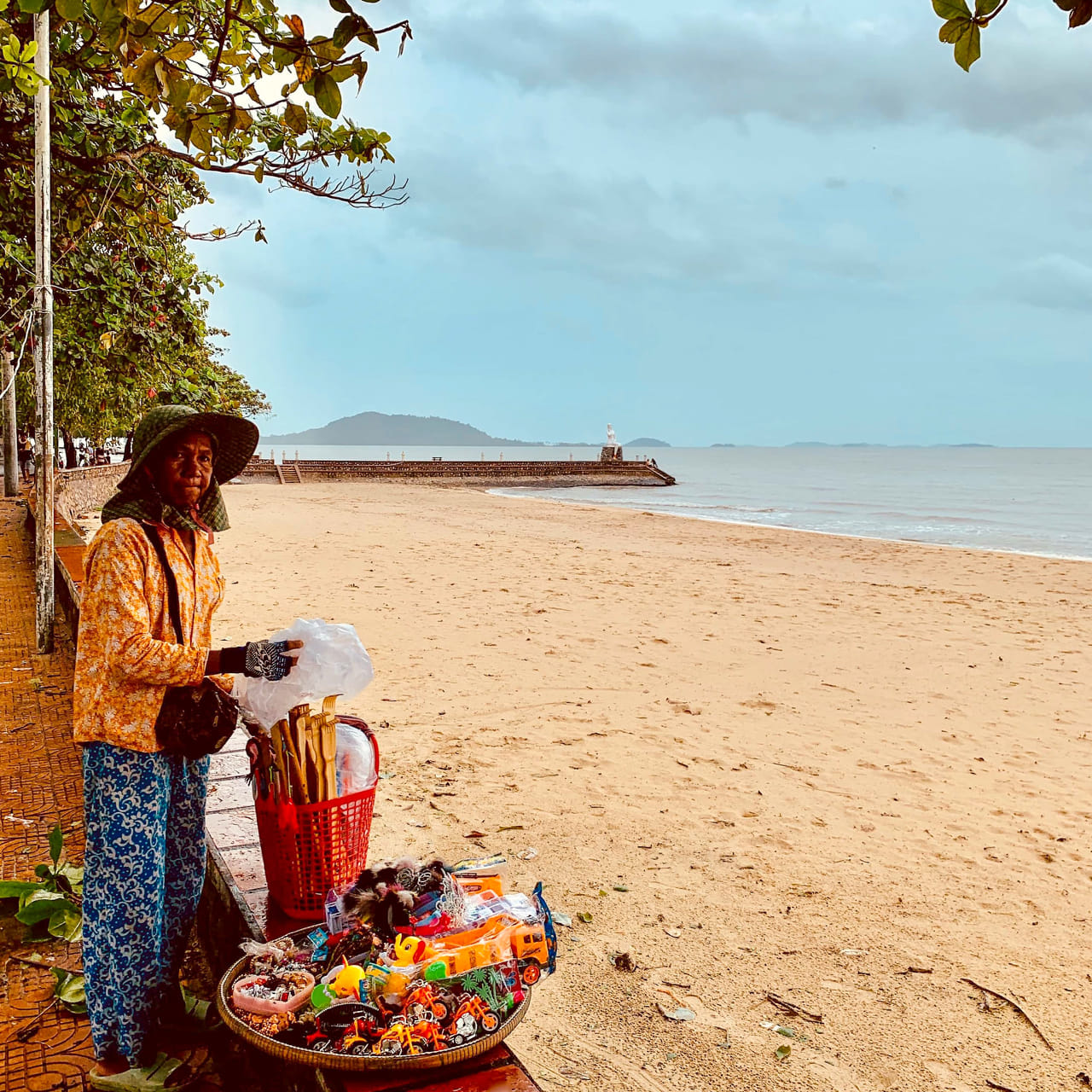 They built dozens of grand townhouses up in the hills, along with European style restaurants and cafes… even a casino. The beach sprang up in the 1920s, with white sand delivered from Sihanoukville to replace the black pebbles and sludge. 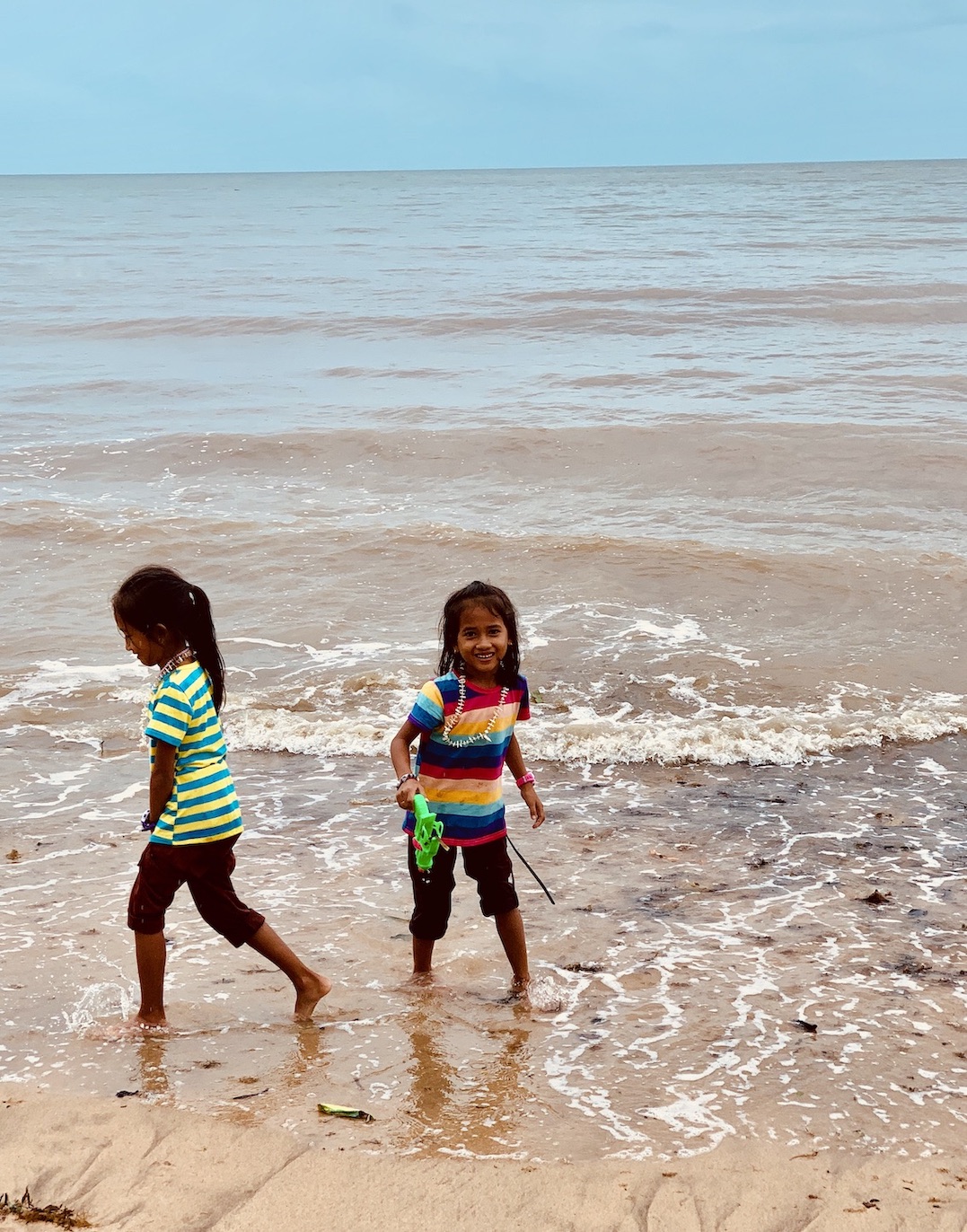 But by the mid 1970s the dream was over thanks to The Khmer Rouge and its ruthless campaign of murder and destruction. Virtually all the town’s expat residents fled, leaving their villas to rot. And so too Kep Beach sat largely empty. Even after Pol Pot and his soldiers had been overthrown, Kep suffered from a lack of tourism and government neglect. 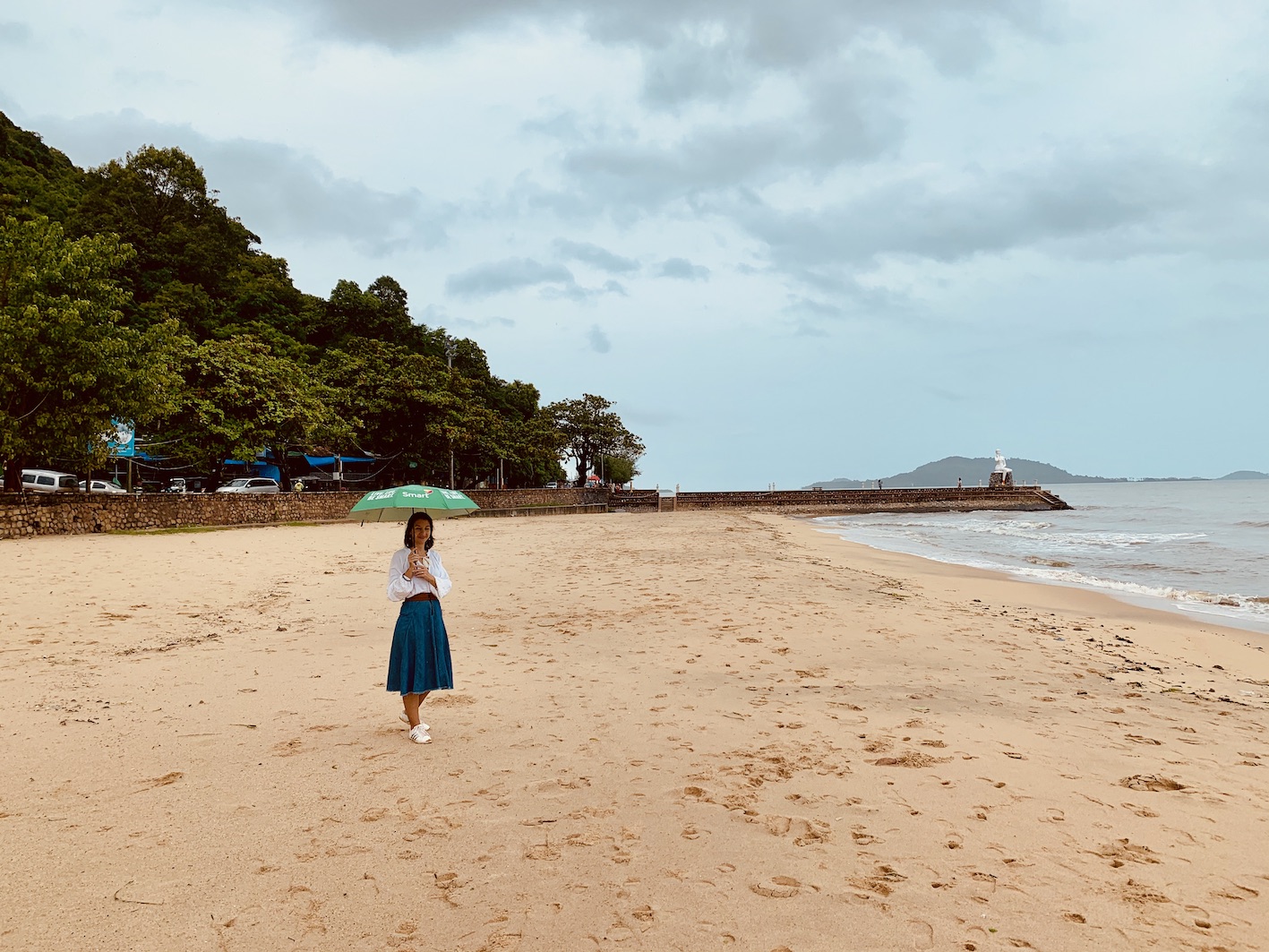 Finally, in the early noughties, Kep and its beach got some much needed investment. Nothing staggering, but enough to bring in day-trippers and curious expats from nearby Kampot Province.

Keen to regain a touch of its former glory, local authorities resumed the practice of importing powdery sand. Moreover, they even extended the beach to a… hold your breath… fifty metres. 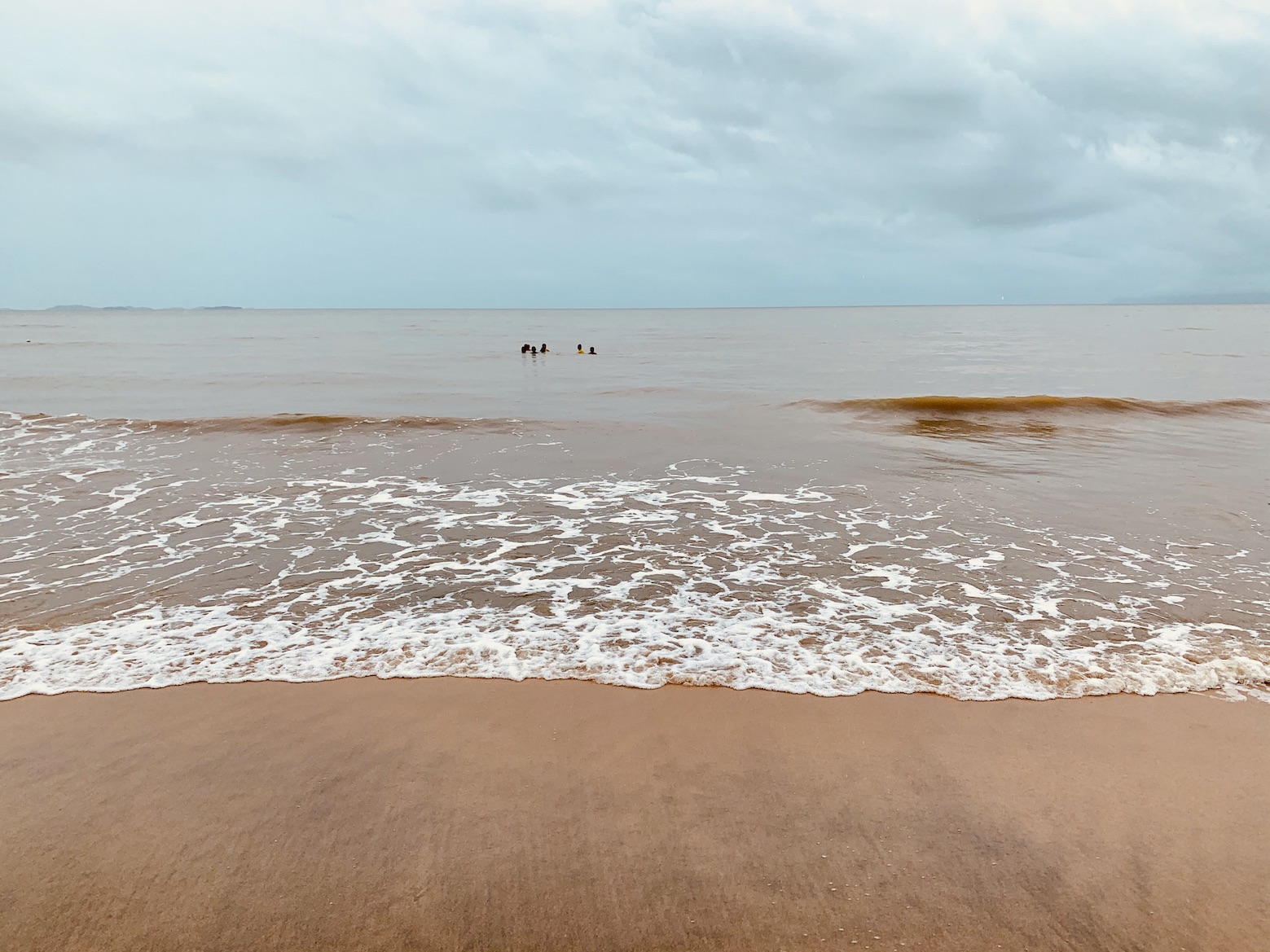 Nevertheless, a pleasingly languid and understated feel prevails. There weren’t, for example, any beachside eateries to speak of. Nor indeed a shack renting parasols or deckchairs. I’m not sure if this was business as usual or because of Covid, but it definitely contributed to the overall charm. 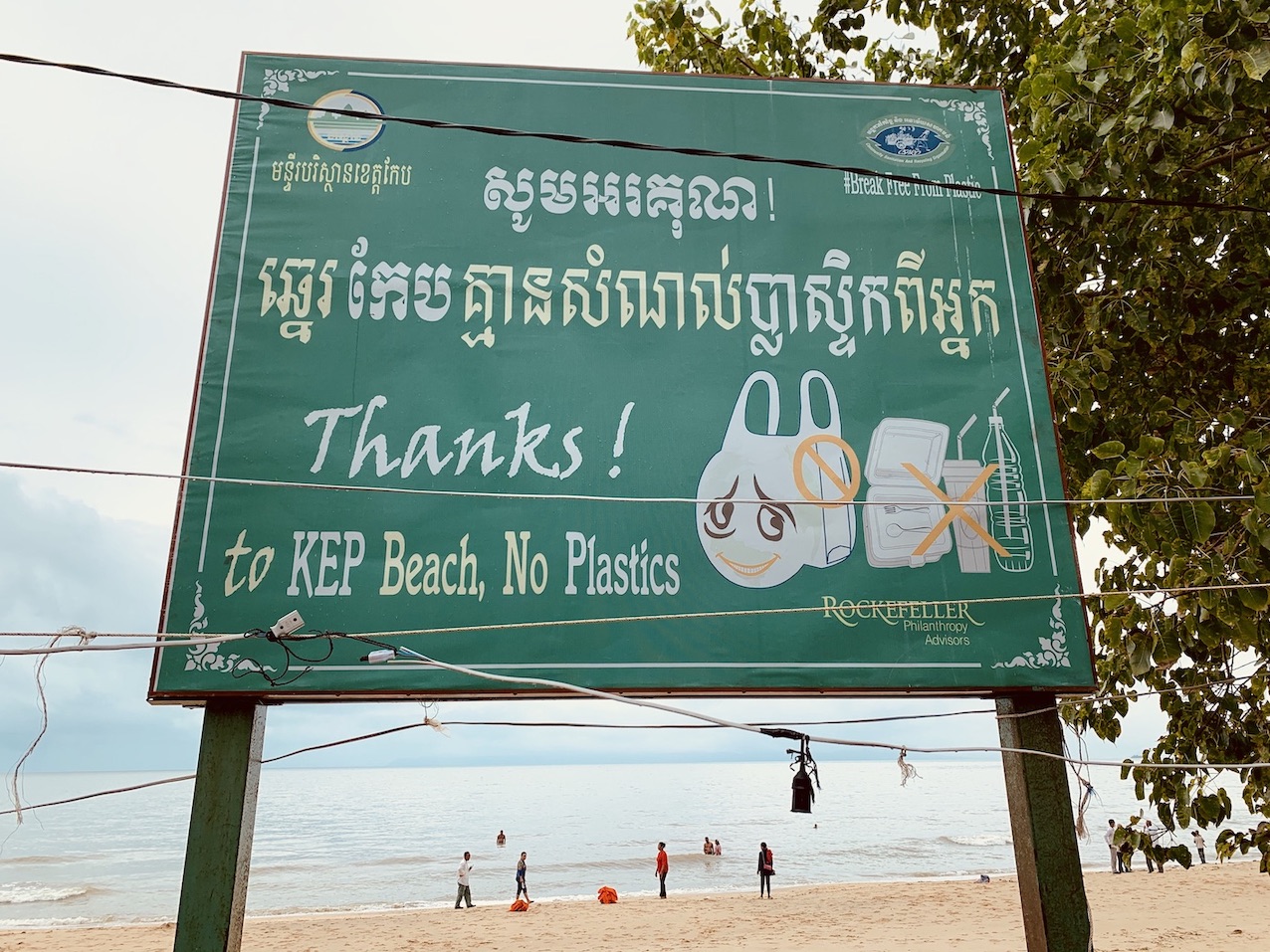 Unfortunately, as with much of Cambodia, we saw plenty of trash washed up across the sands. Furthermore, we passed the remains of people’s lunches left right where they’d eaten.

Little mounds of chicken bones, napkins, candy wrappers and plastic bottles. It was depressing, especially when we subsequently came across the large Keep Kep Beach Clean! sign on the promenade. 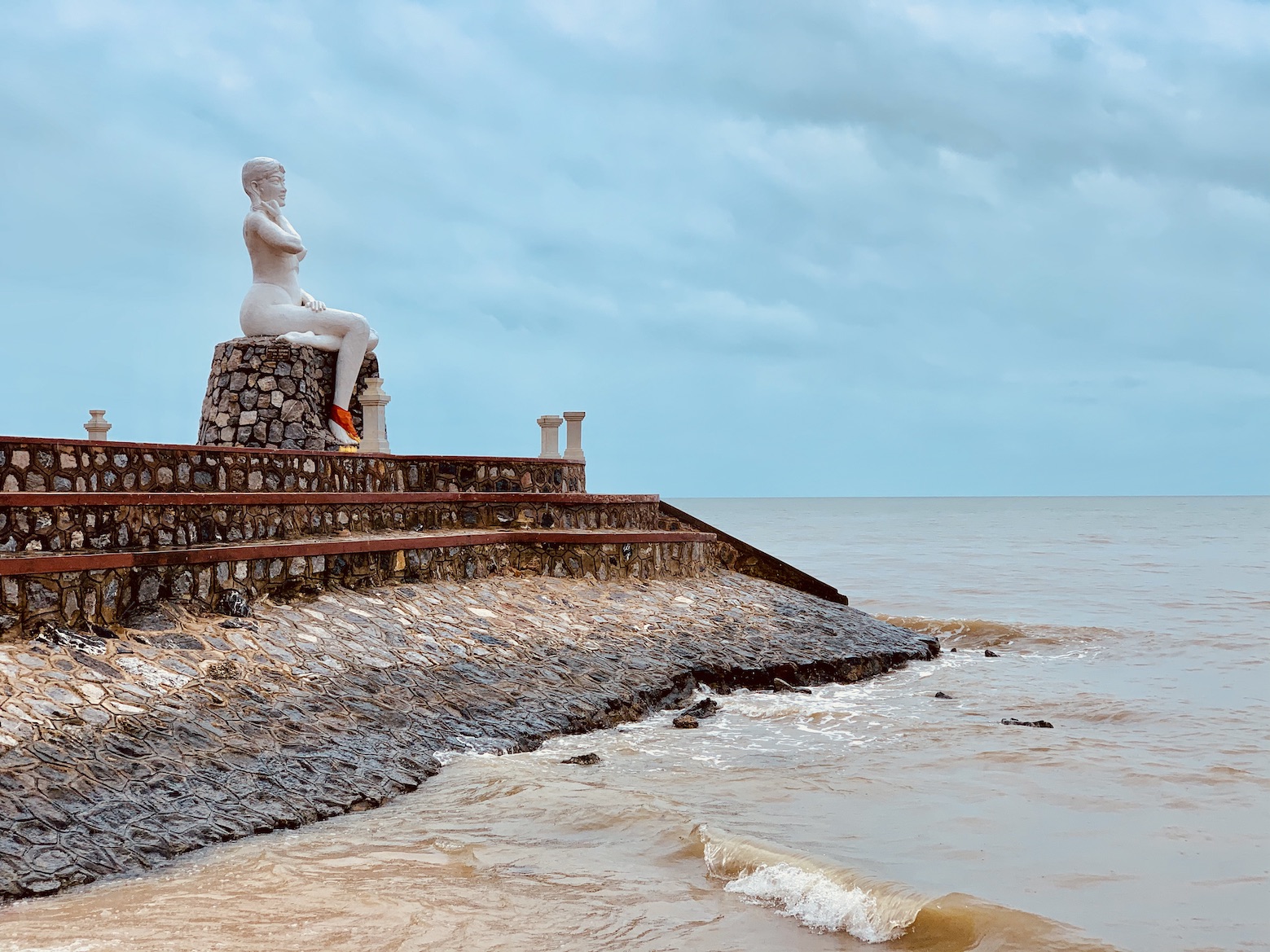 At the eastern end of the beach, the promenade extends a little out into the sea. This is where I came to say hello to my old friend The Kep Lady. Aka The White Lady, Beautiful Lady and The Woman Waiting for Her Man, among other nicknames. 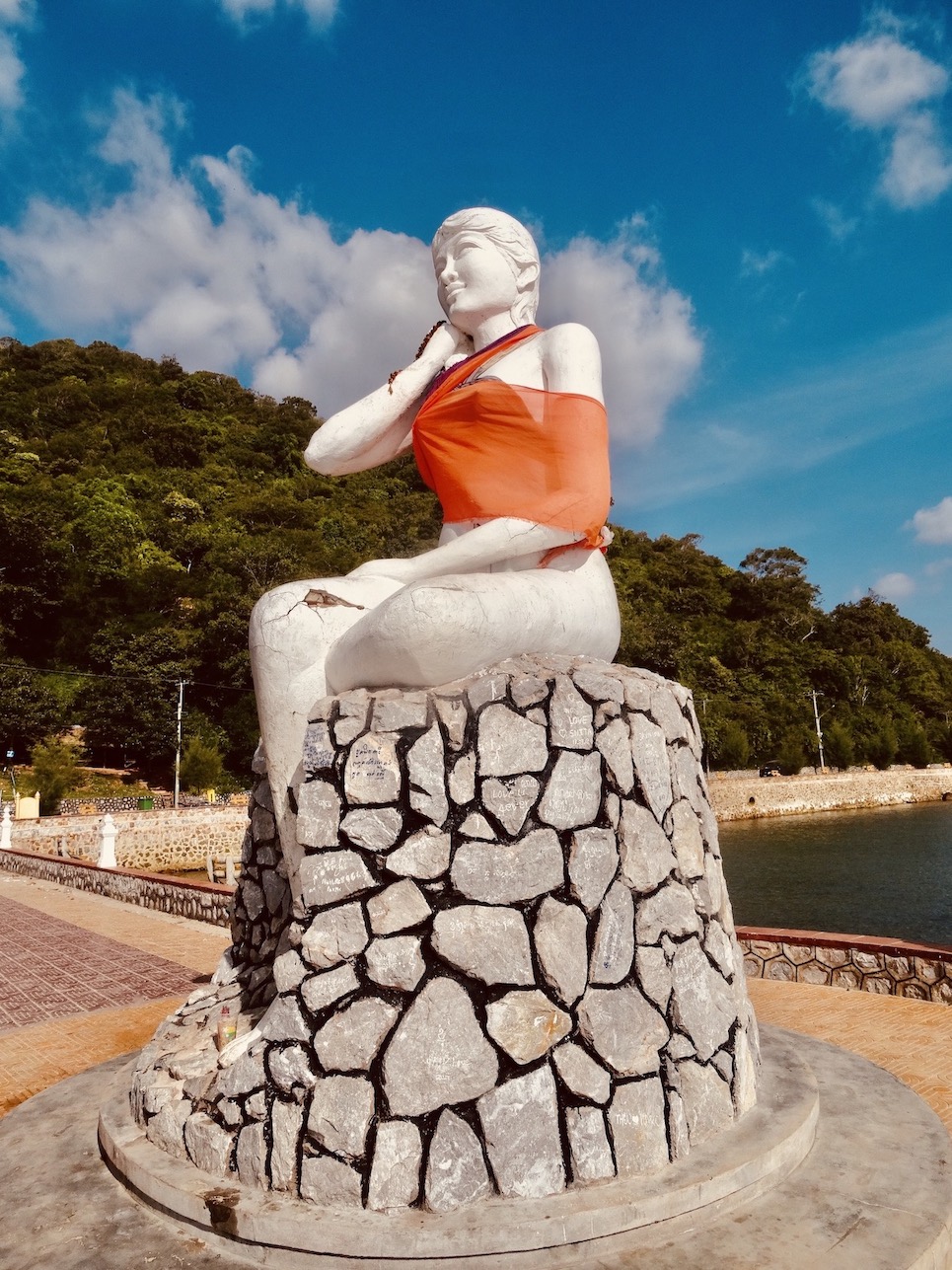 For many Cambodians, she represents a young Yeay Mao, a mythical Buddhist heroine. Unveiled in 2012, the statue depicts her staring forlornly out to sea awaiting the return of her fisherman husband. 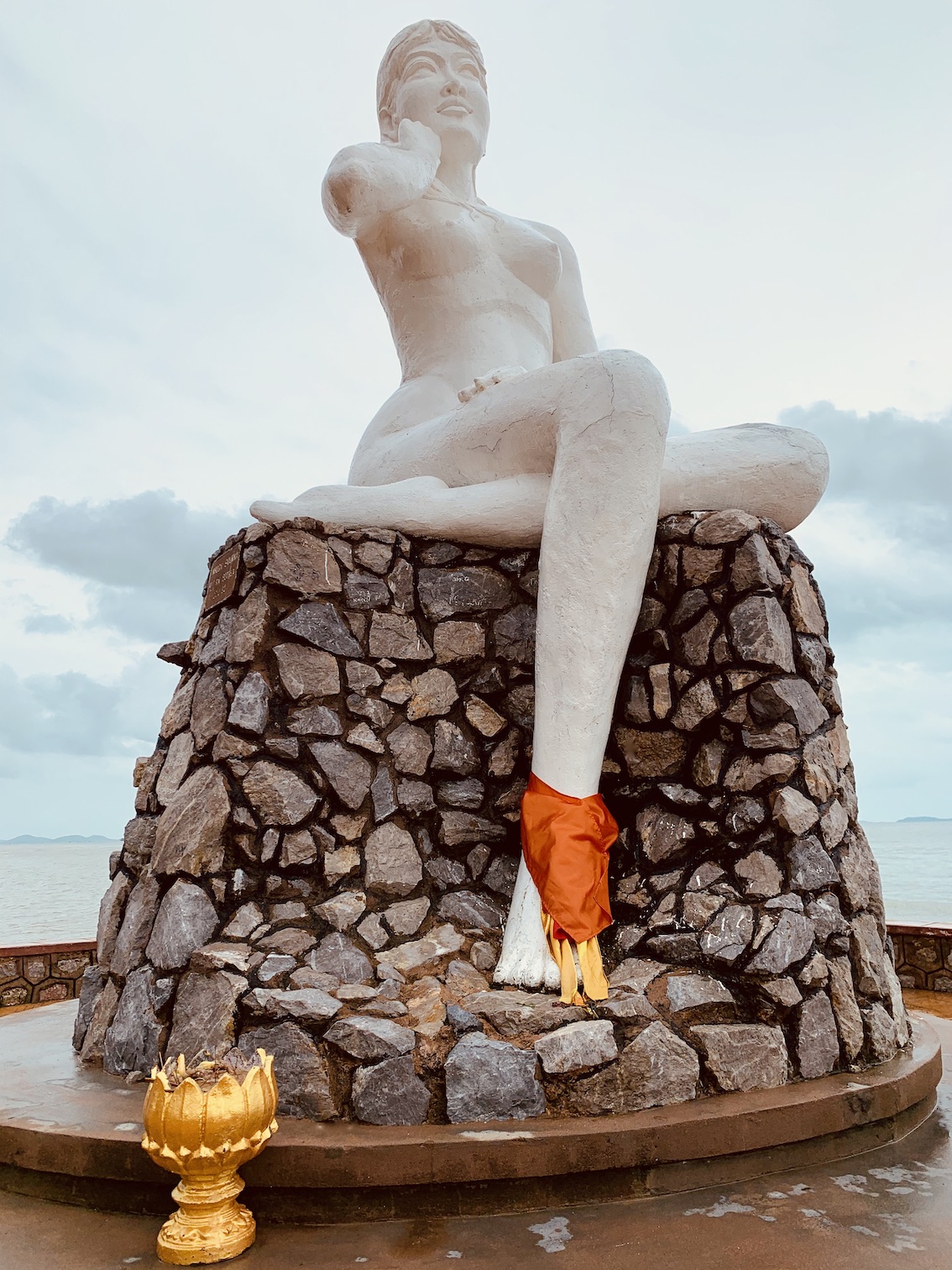 As the protector of fishermen, seaman and travellers, she holds a special place in the hearts of locals who live along the coast. Interestingly, Sladja and I had seen an older version of her during our day exploring nearby Bokor National Park. 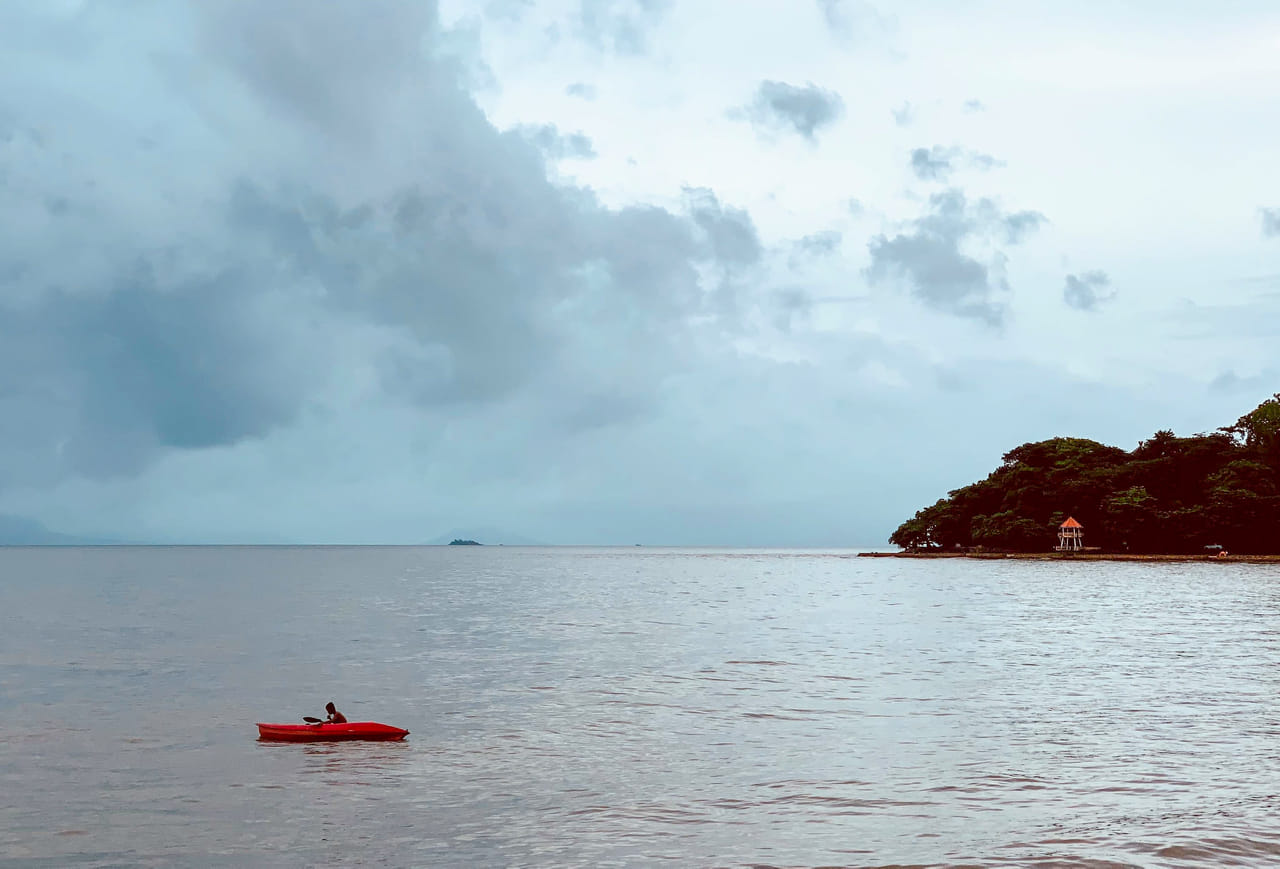 It’s also a great spot for views over Chhak Kep Bay. By now the sky was reaching new levels of apocalyptic, with low hanging black clouds and a lone canoeist drifting by. Across the water, on the winding road that leads to Kep Crab Market, I spied the gazebo where Wonderboy and I paused to grab some photos. 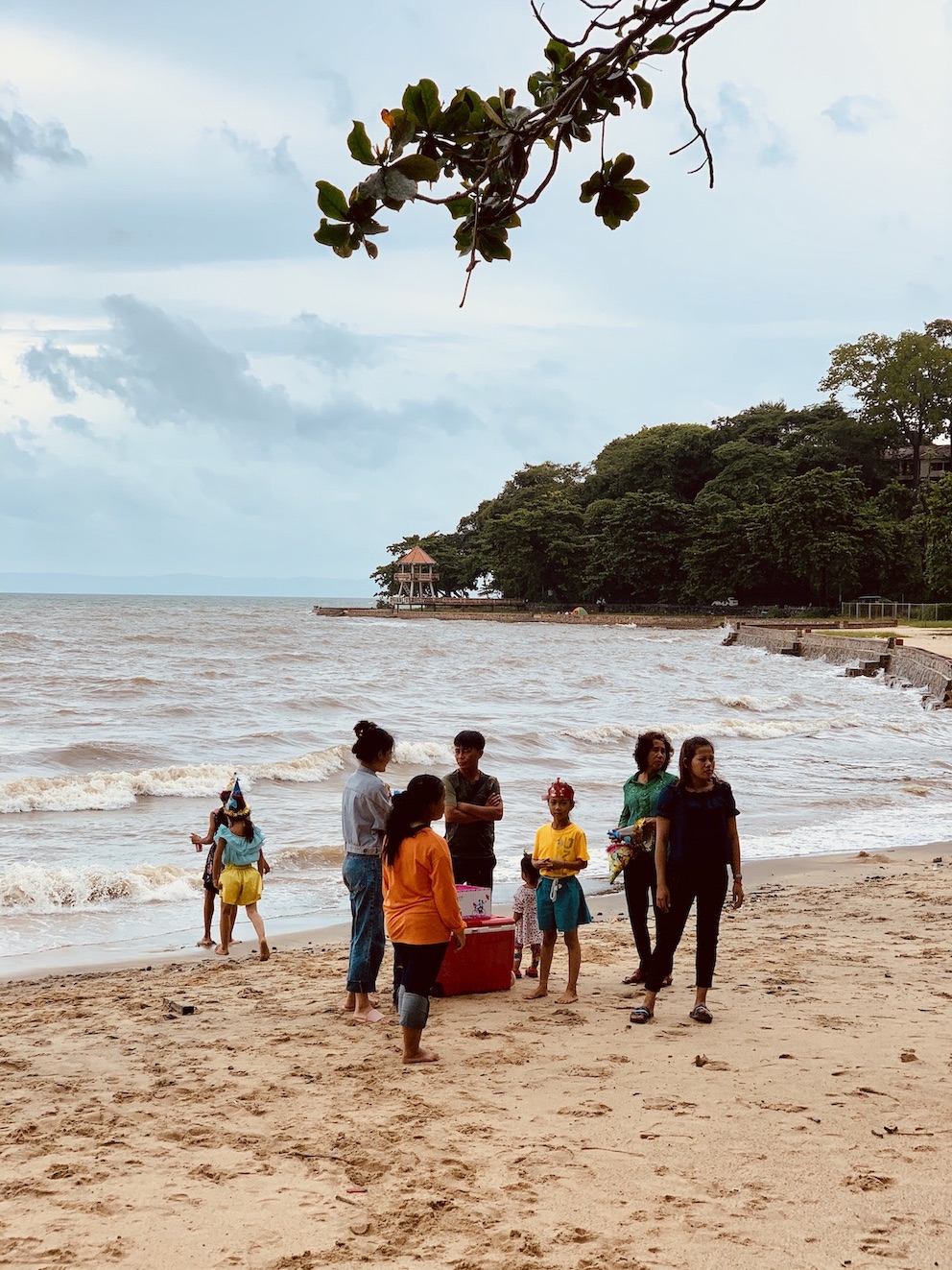 Thus we decided to walk all the way back along the beach towards the gazebo. It was even quieter down there, just the occasional tent of barbecuing locals and lots of monkeys. Some were feasting from trash cans by the side of the road, others just mooching around, adding to Kep’s pervading laziness.

On arrival, I was amused and pleased to see the gazebo much as I remembered it. Just a little more run down after four and a half years of burning sun and torrential rains. 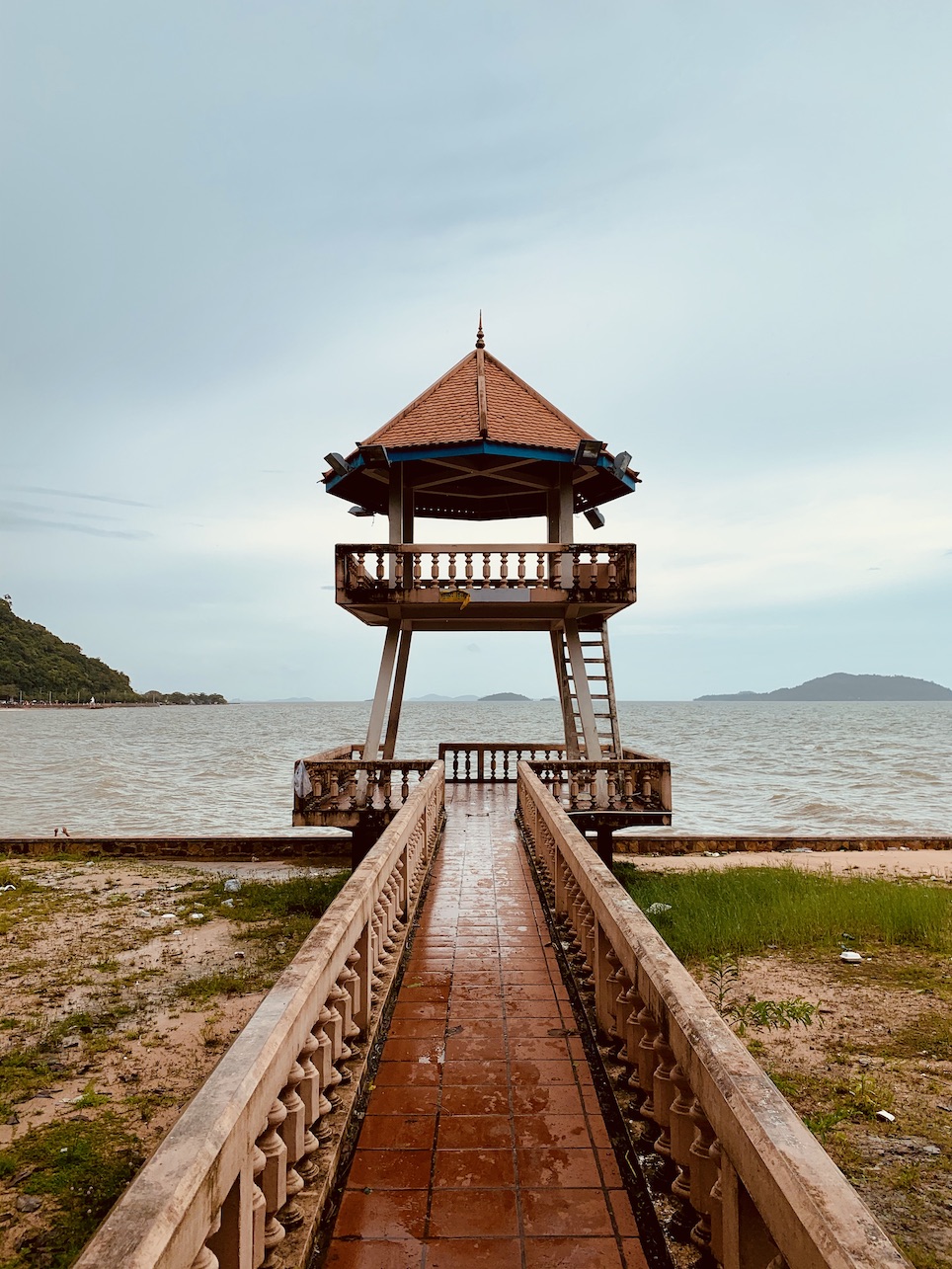 Inside we climbed the short, rickety stepladder up to the viewing platform. The resulting panoramic over the beach and hills was lovely. 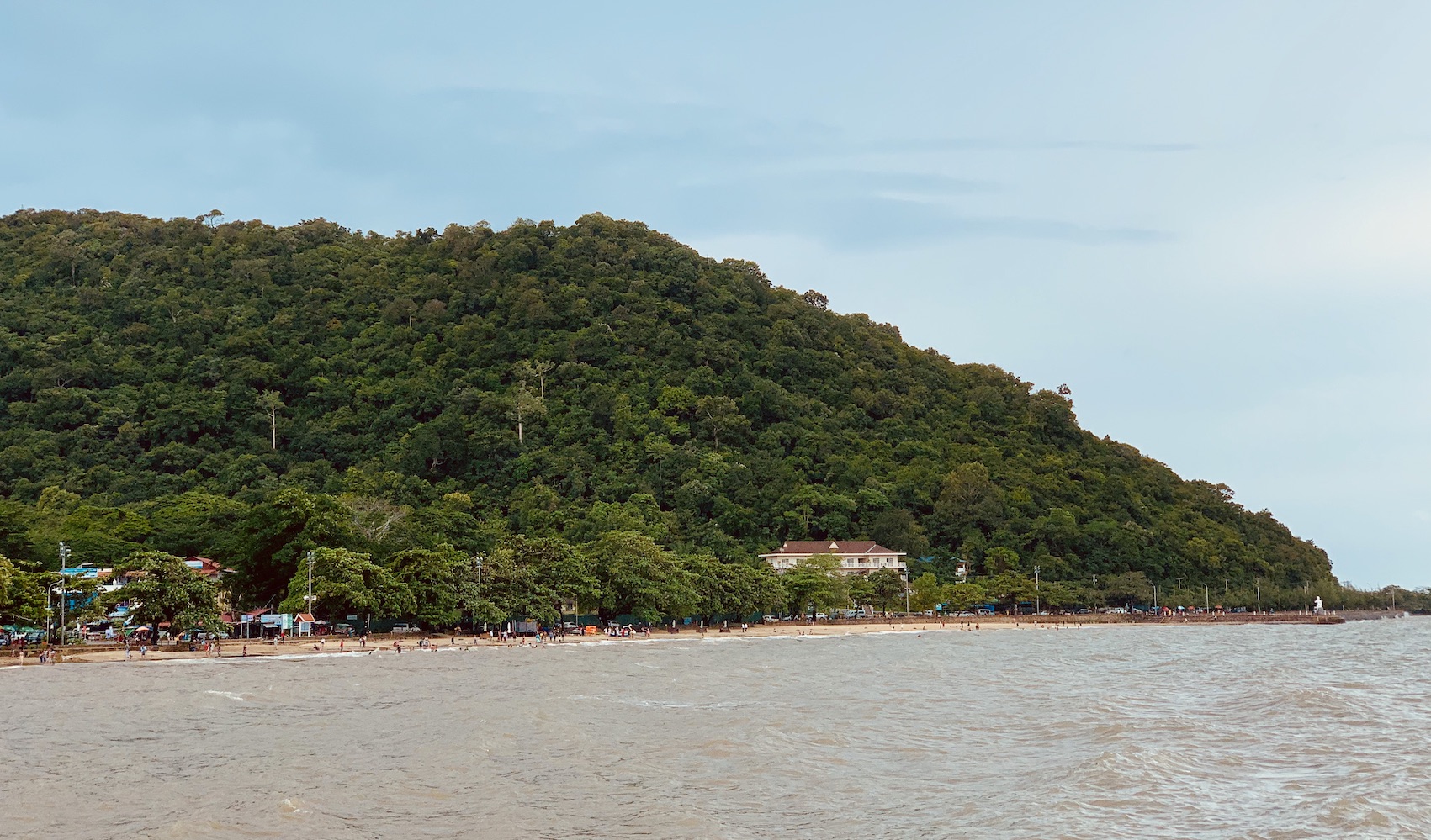 Tilt your camera in the other direction and you’ve got the vast expanse of the sea bookmarked by the distant outline of Rabbit Island. 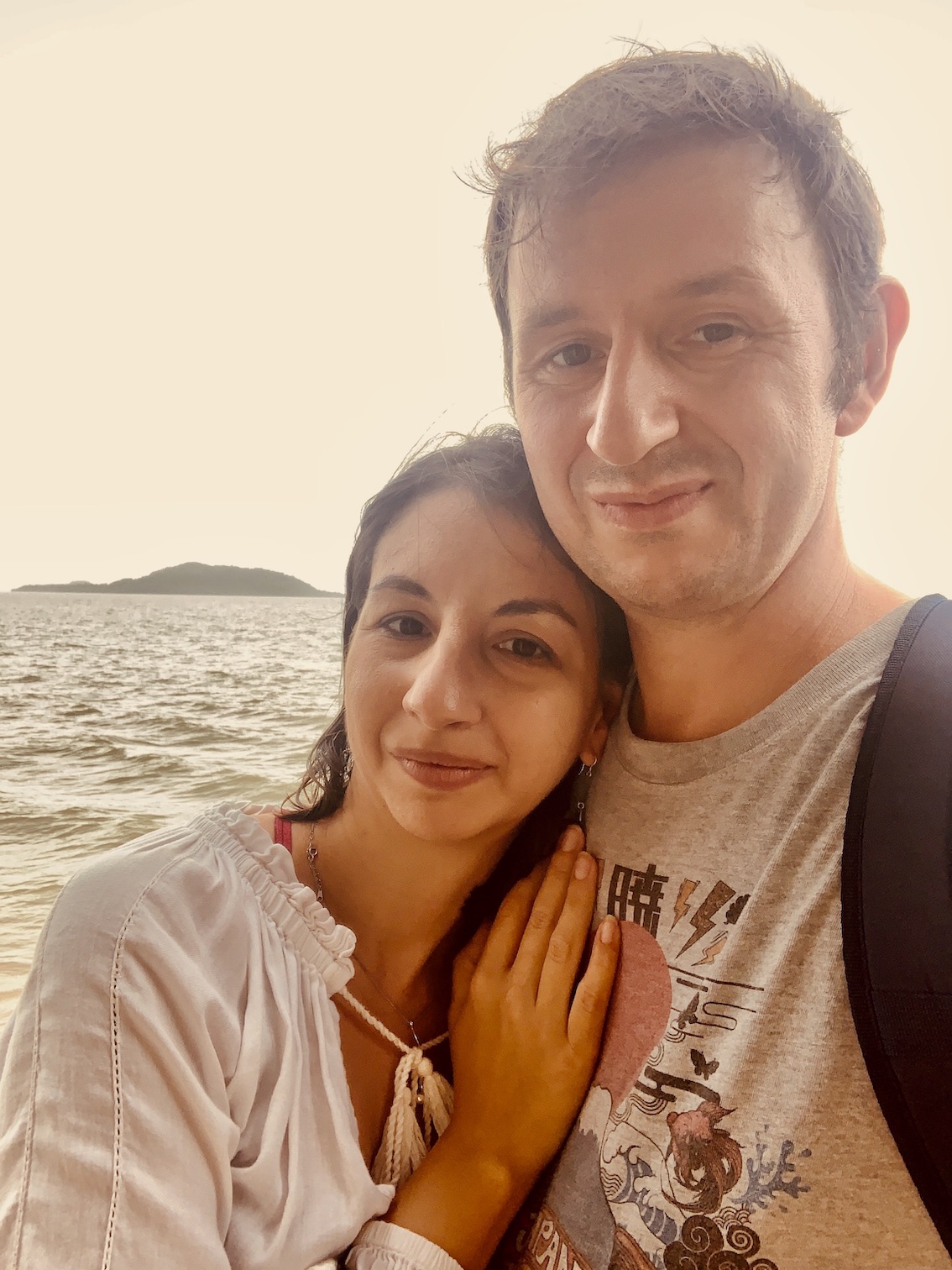 Beyond the gazebo, the path twists around the hills alongside the sea. At one point, I was lining up a shot of this magnificent tree when an orange-robed monk appeared from around the corner. As he slowly but surely plodded towards us, it was a case of perfect timing. Click. 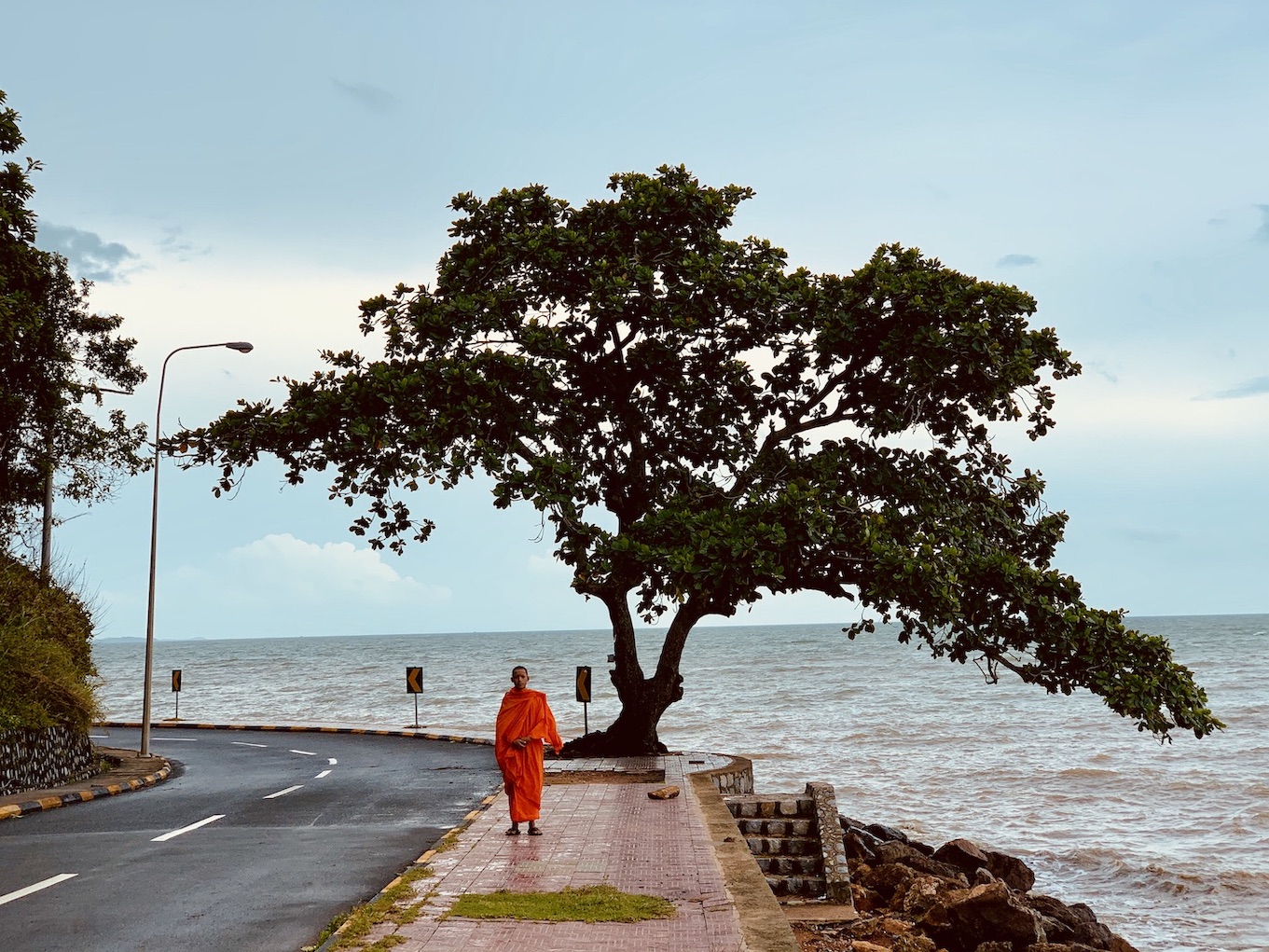 Back at the beach, we crossed the road for some drinks at Kep’s fanciest central lodgings, The Beach House Hotel. Perched on a hill overlooking the sea, it’s a charming albeit shabby old structure with sixteen rooms of varying sizes and facilities. 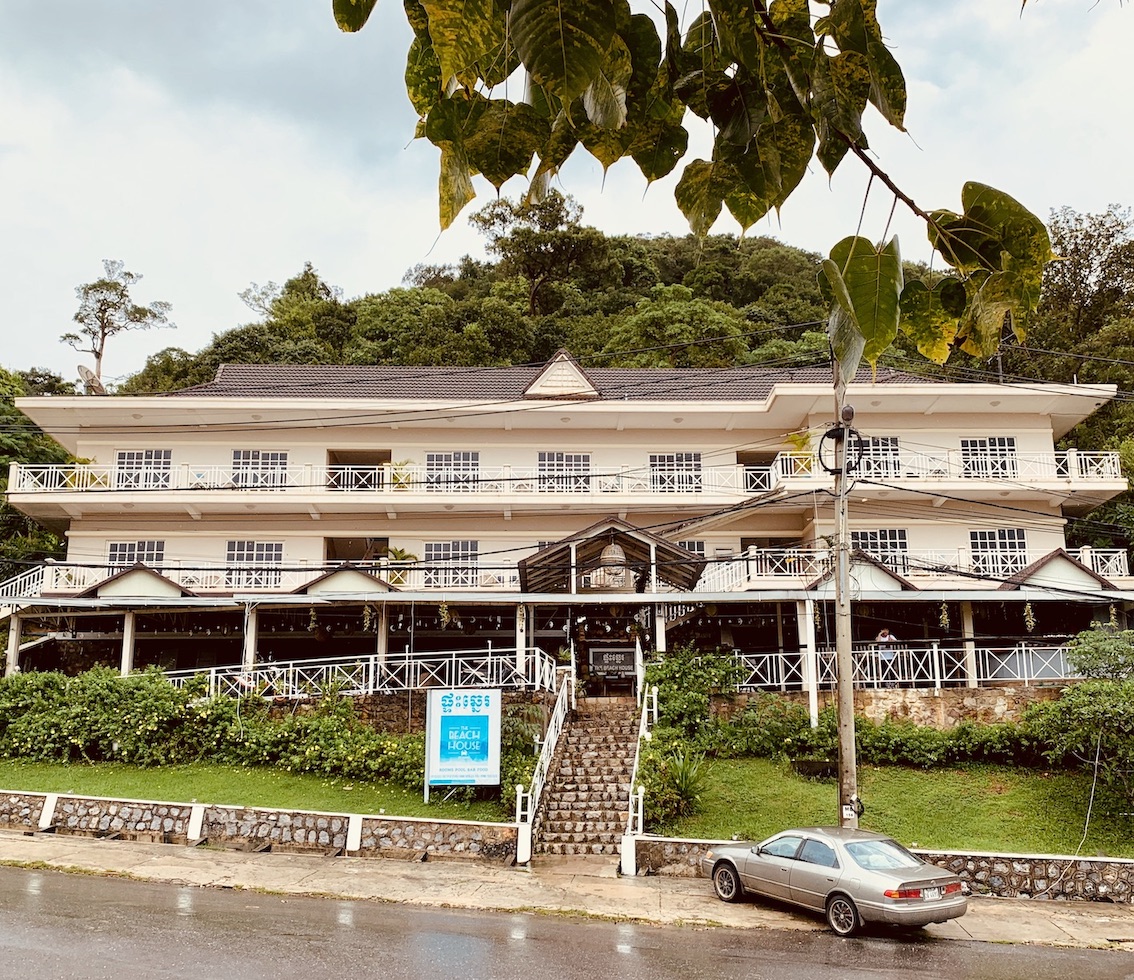 Climbing the stairs to their restaurant and bar lounge, we ordered a couple of smoothies and kicked back, reflecting on an excellent morning. It had been fun revisiting the beach, but now it was time for something I really wished I’d taken the time for back in 2015. 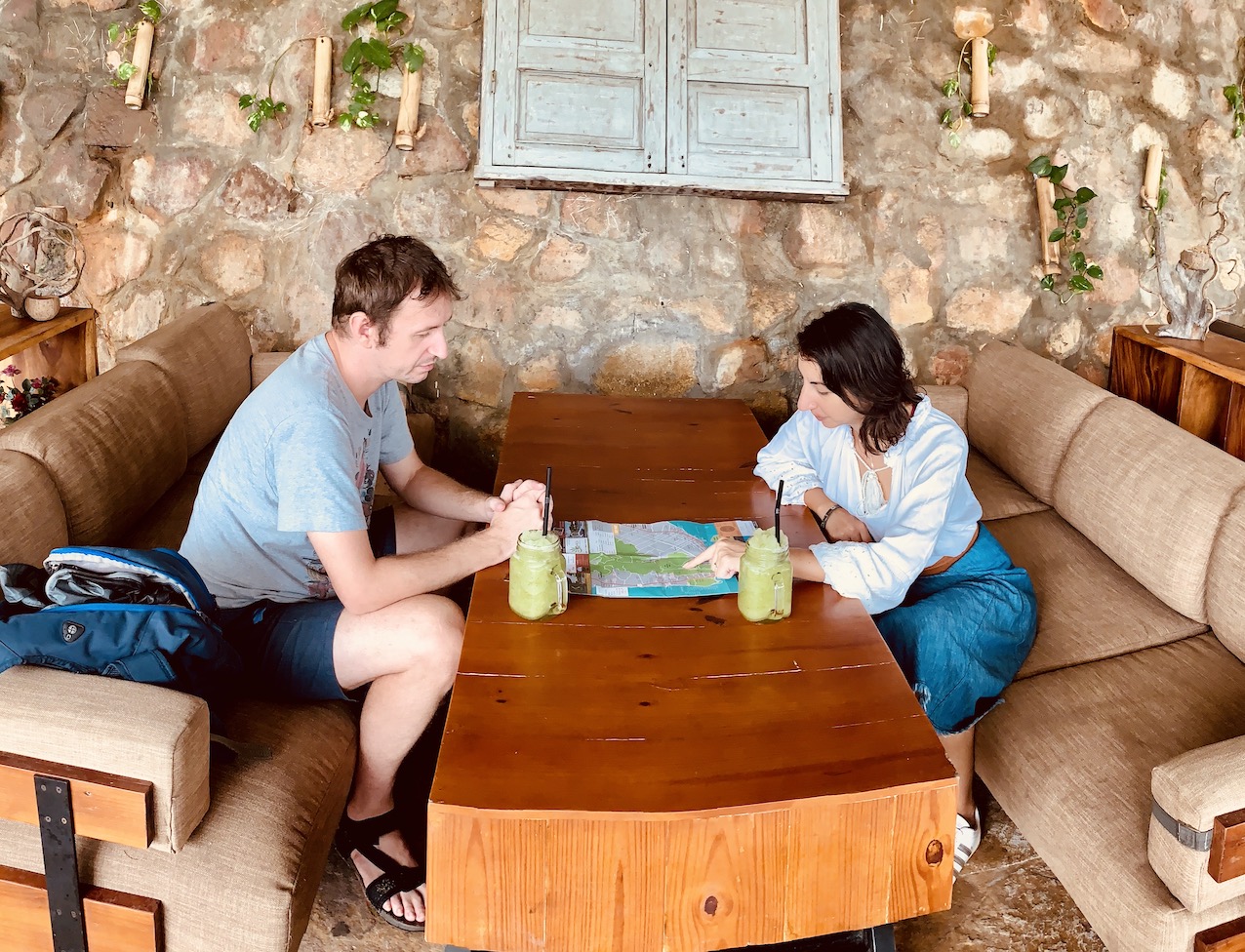 We wanted to see some of the abandoned French villas up on Kep’s jungle roads. All we needed was a knowledgeable tuk tuk driver who spoke a bit of English and was up for an adventure. Enquiring at reception, I asked the dude if he could hook us up with someone.

He made some calls… plenty of dialogue flew back and forth. He looked at me a few times with shrugged shoulders… gesticulated wildly with his hands. There were raised voices, laughing… an exasperated sigh. Eventually, he hung up and smiled. “Someone is coming…. please wait five minutes”. 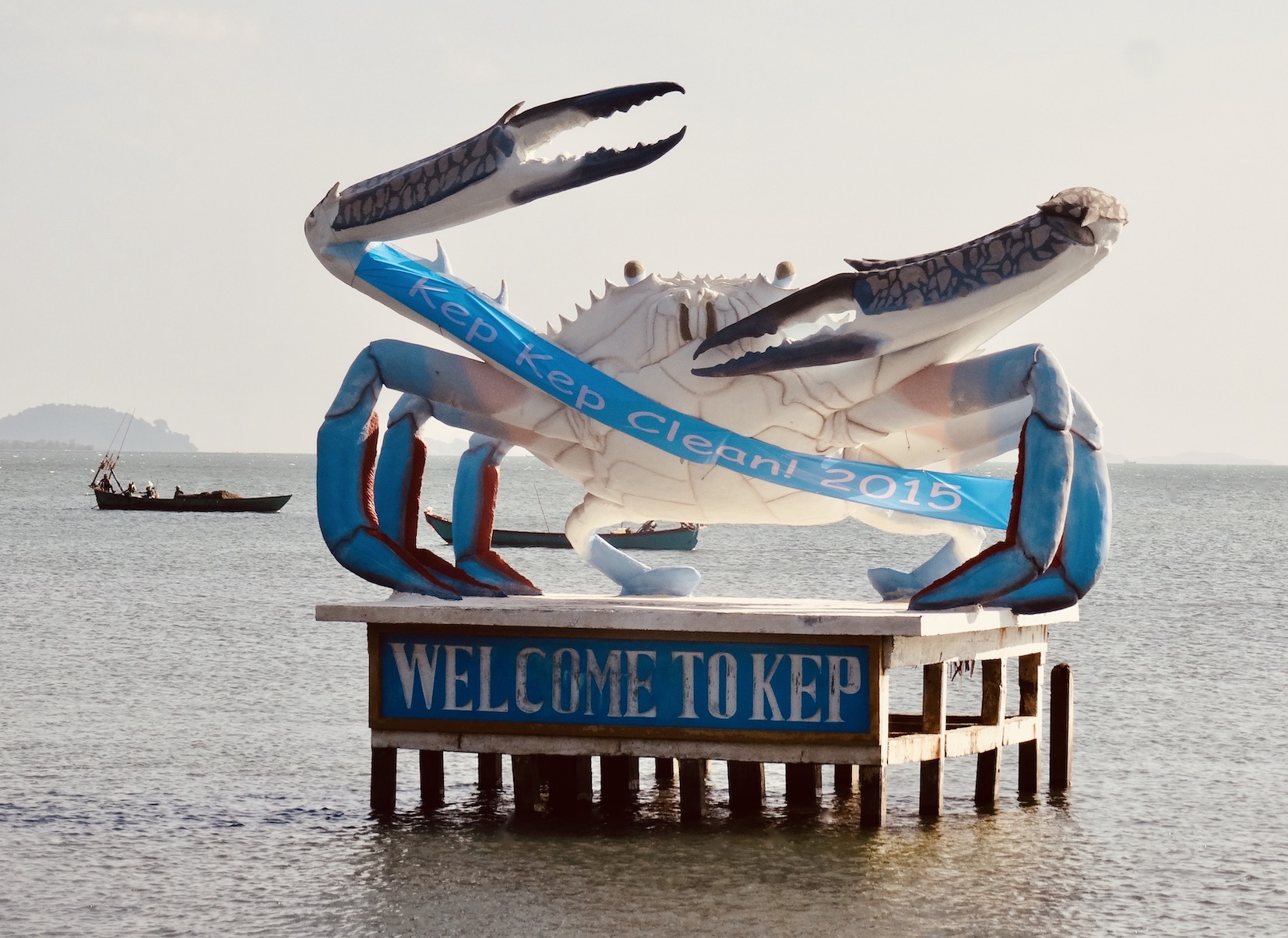