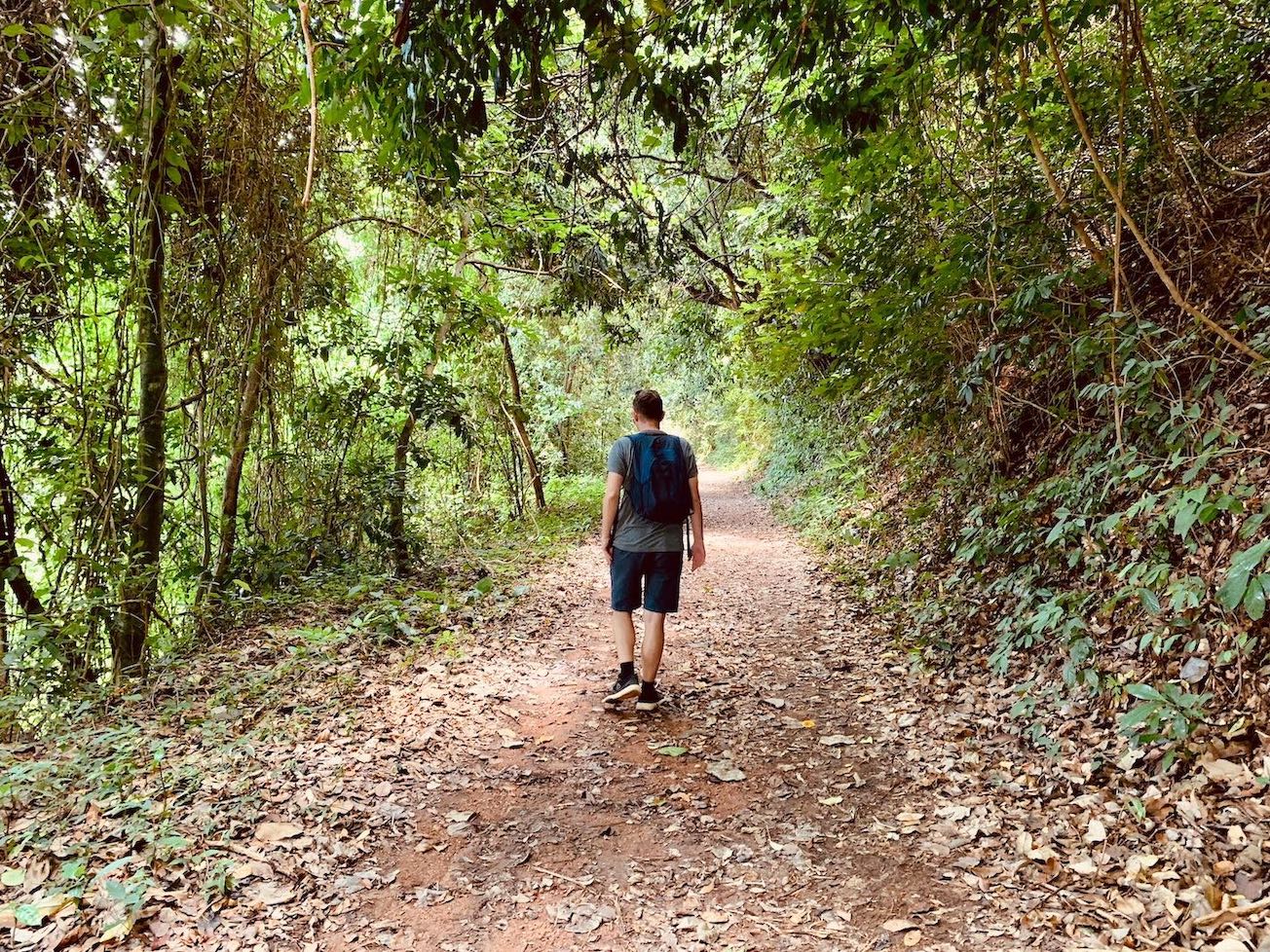 August 2020. It was another Monday afternoon in Cambodia, which meant we were back in a tuk tuk for the forty minute drive into Kep from Kampot. After our adventures exploring Kep Beach, the abandoned colonial mansions and the Crab Market, our next project was an afternoon hike through Kep National Park.

Established in 1993, this is not your standard national park. In fact, it’s more of a protected wildlife reserve with half a dozen jungle trails up in the hills overlooking the town, beach and sea. Moreover, it’s the only national park in Cambodia that doesn’t require a guide. 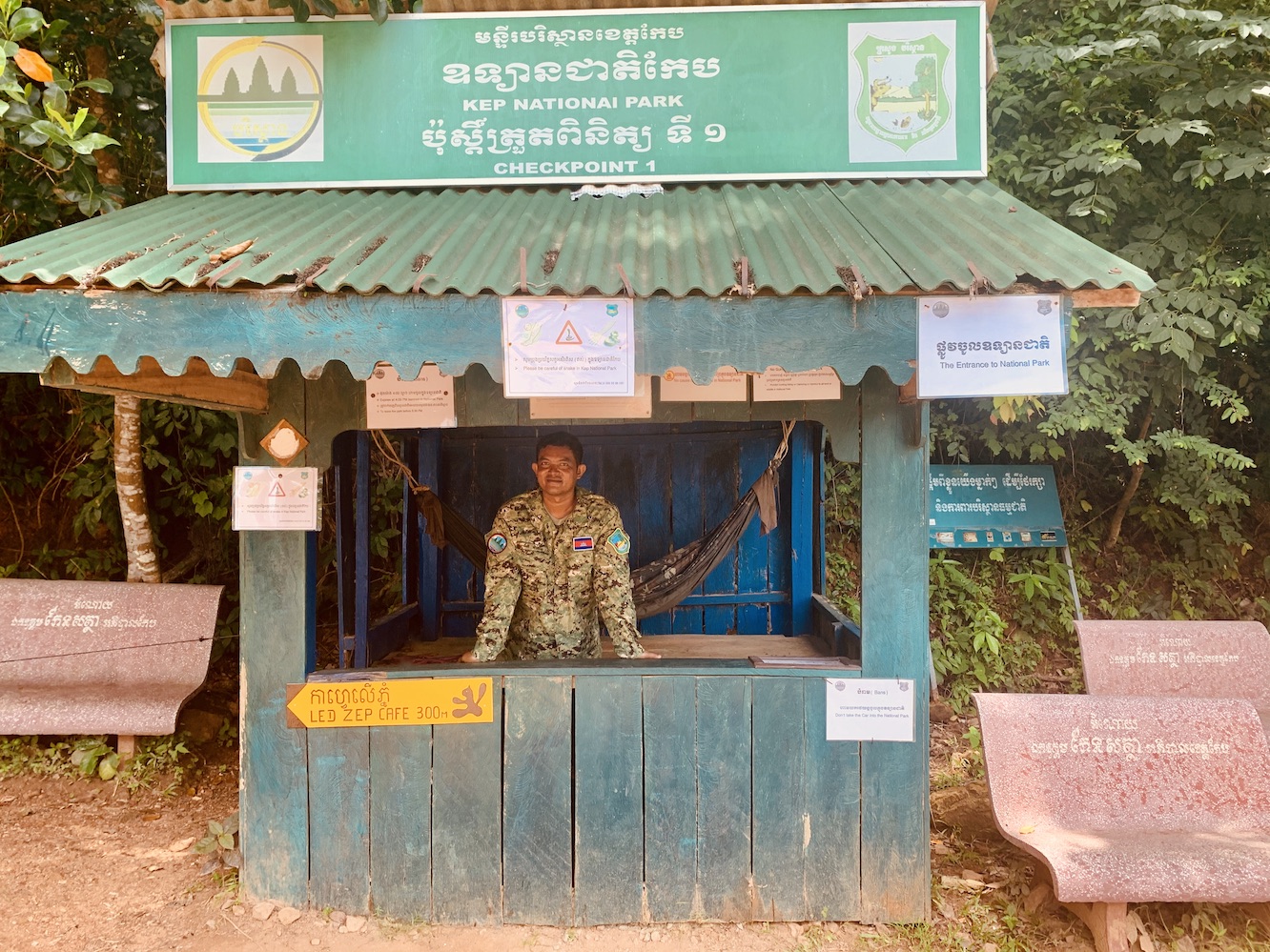 While there are numerous entry points, our driver felt moved to drop us at Checkpoint 1, where a friendly guard accepted our $2 entry fee (yes, just a dollar each). 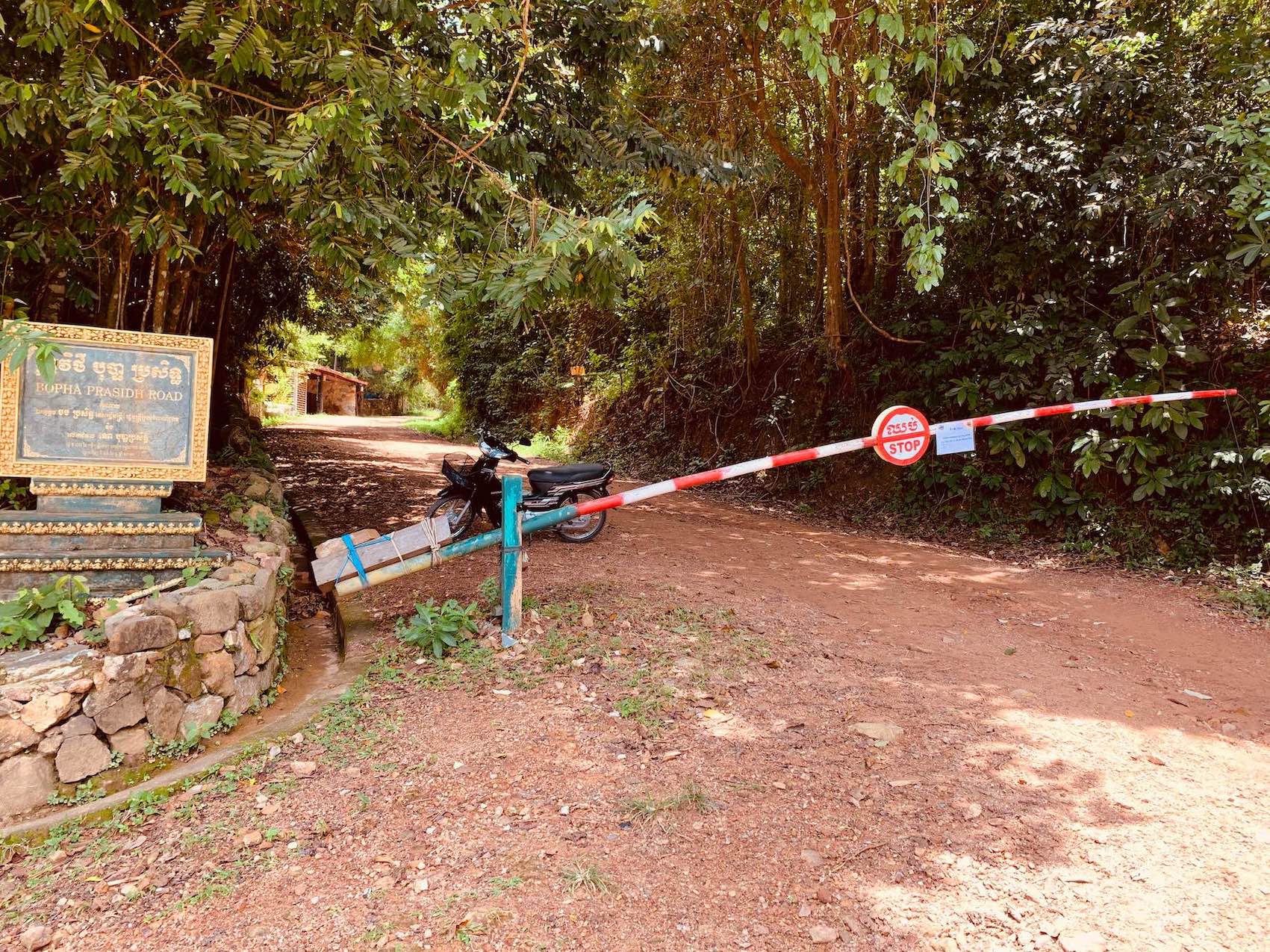 It was a typically hot and humid day, but happily the trail provided excellent shelter from the ferocity of the afternoon sun. Besides some light reading, we hadn’t researched the park all that much. Somewhat foolishly, we figured on simply following the main eight kilometre trail that loops around the mountain. After all, we’d read that the park is well signposted and you can’t really get lost. 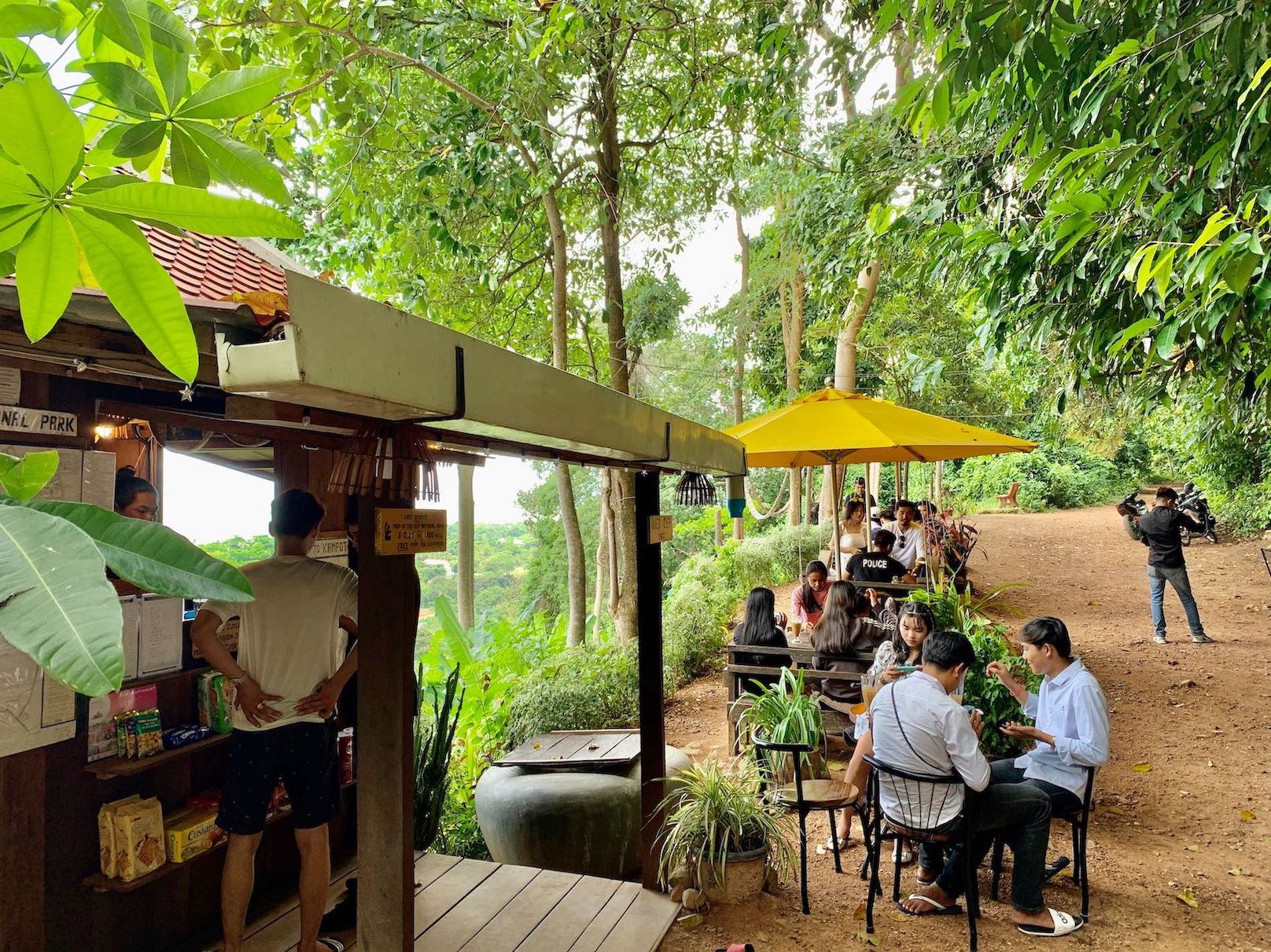 Within just a hundred metres we came across the first of the park’s signature yellow signs at Led Zep Cafe. A Frenchman by the name of Christian Debinut launched this much-loved Kep institution after years spent hiking and mapping out the hill’s various trails. 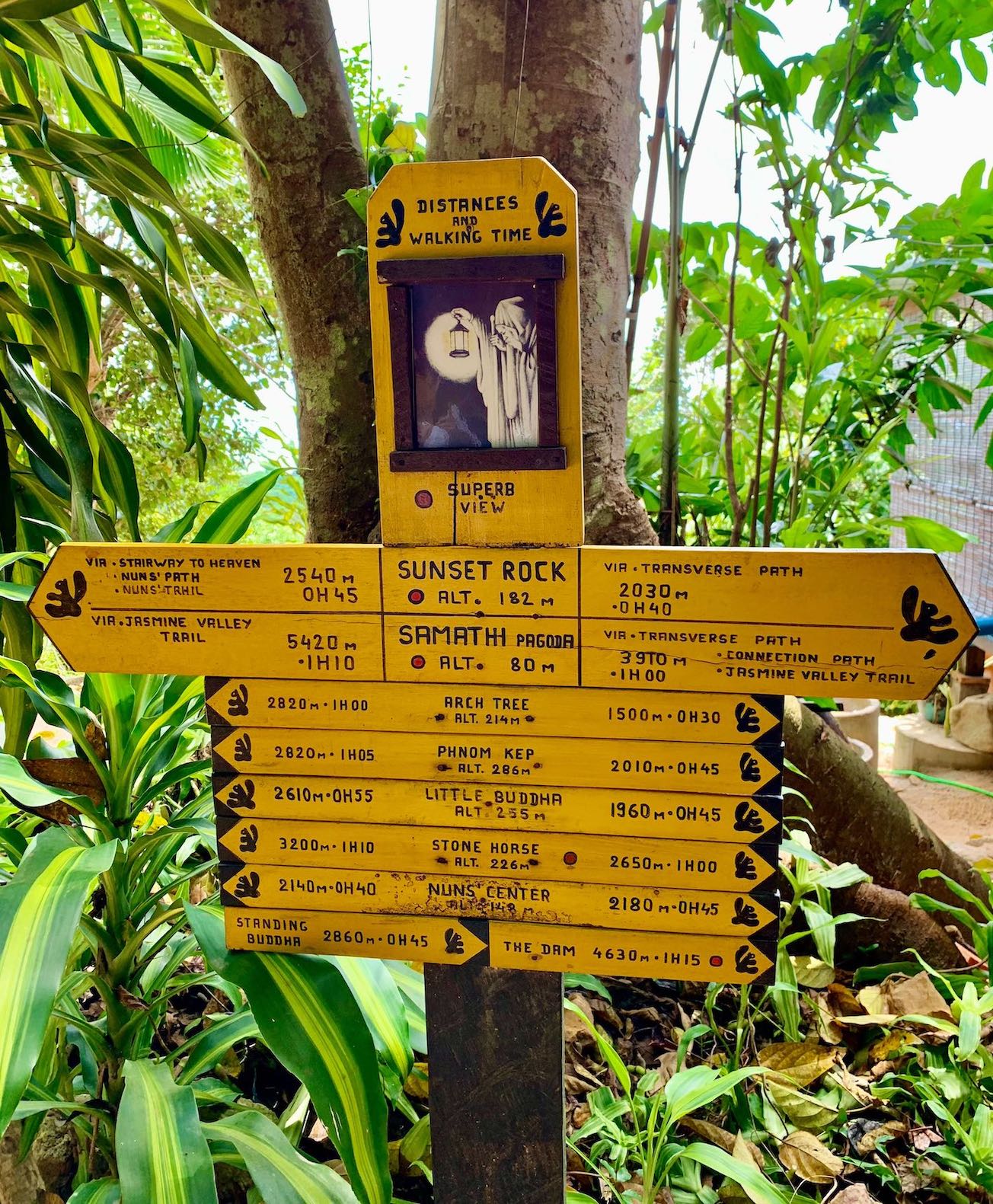 He launched Led Zep Cafe, Kep National Park’s most popular food and drink spot, in 2005. Over the following years Christian introduced the signposts, began offering free maps and oversaw a number of cleanup projects. Sadly, he’s since passed away and the cafe is now run by two of his closest Cambodian friends, Srey Pao and Lang Anika. 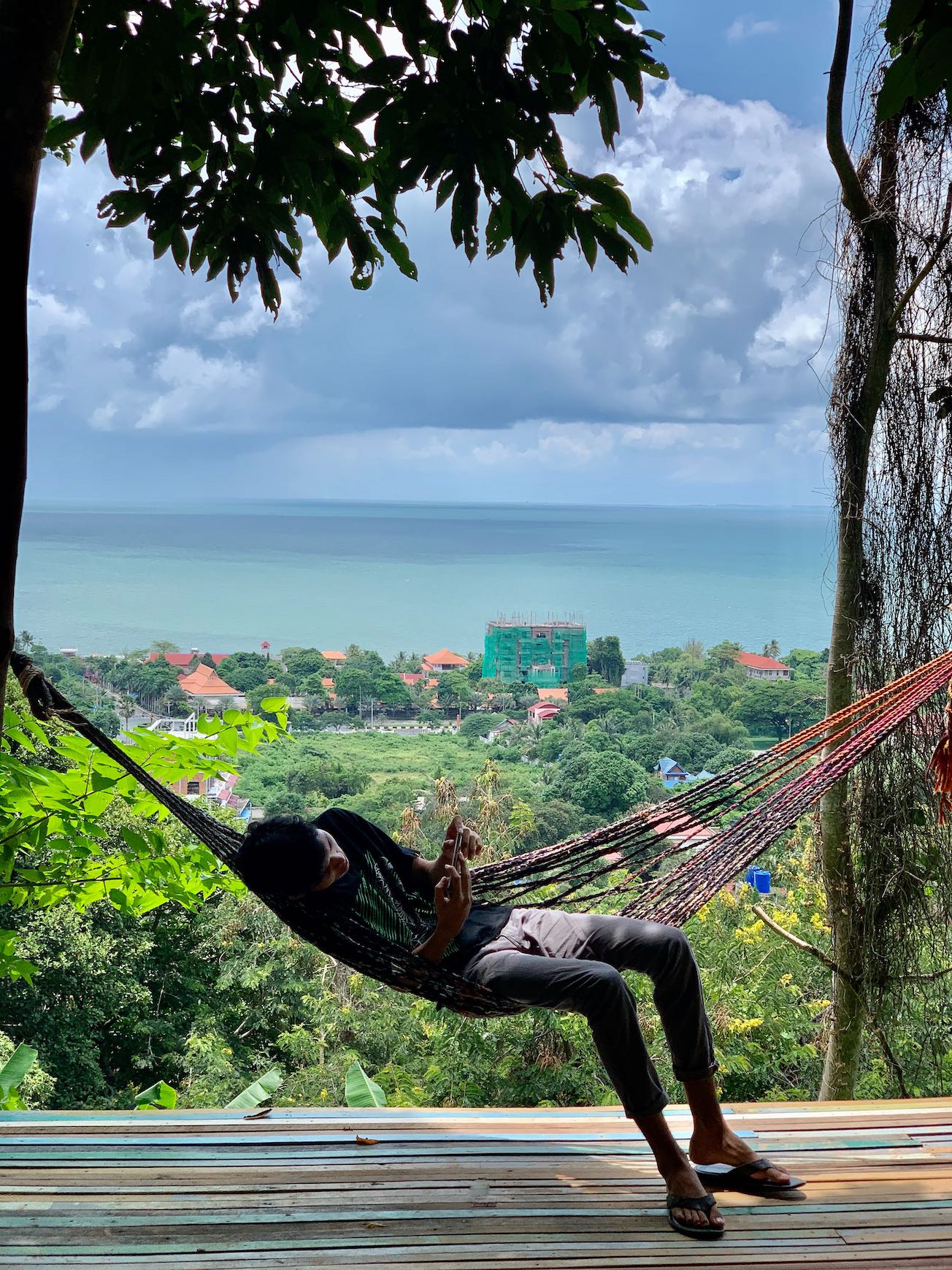 You won’t find much info about Christian online. Prior to our visit, I’d been expecting to see faded Robert Plant and Jimmy Page posters. Perhaps a Stairway To Heaven burger or some Beef Lok Lak served with A Whole Lotta Love.

But there’s nothing at all to reference Led Zeppelin the band. Rather, this is an understated, open air joint with tables, chairs and hammocks overlooking the sea. If you ever visit, their fresh lime juices and crepes come particularly recommended. 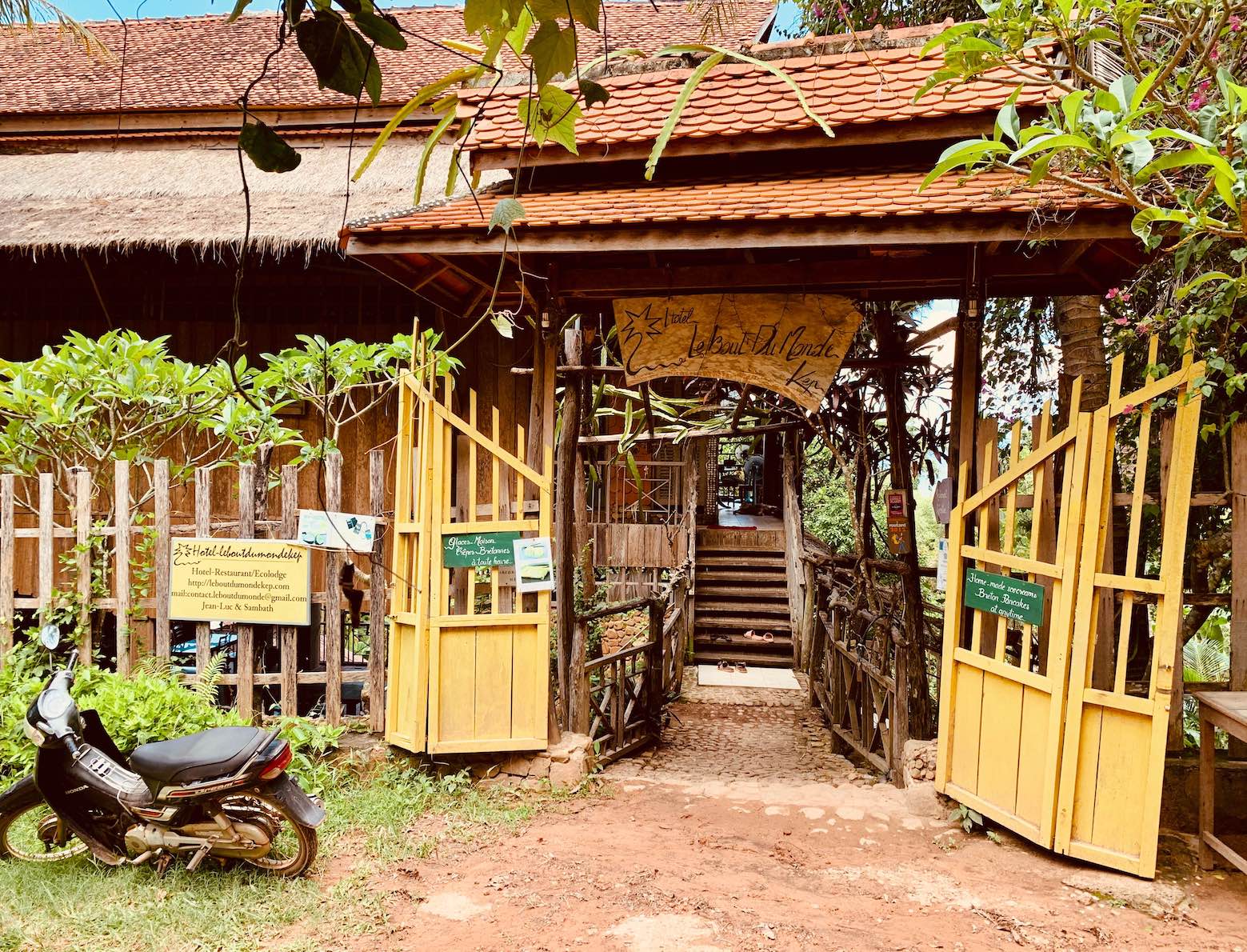 Led Zep Cafe was a bit too busy for our liking, hence we opted to pay a visit to Kep National Park’s swankiest guesthouse, Le Bout du Monde (The End of the World). 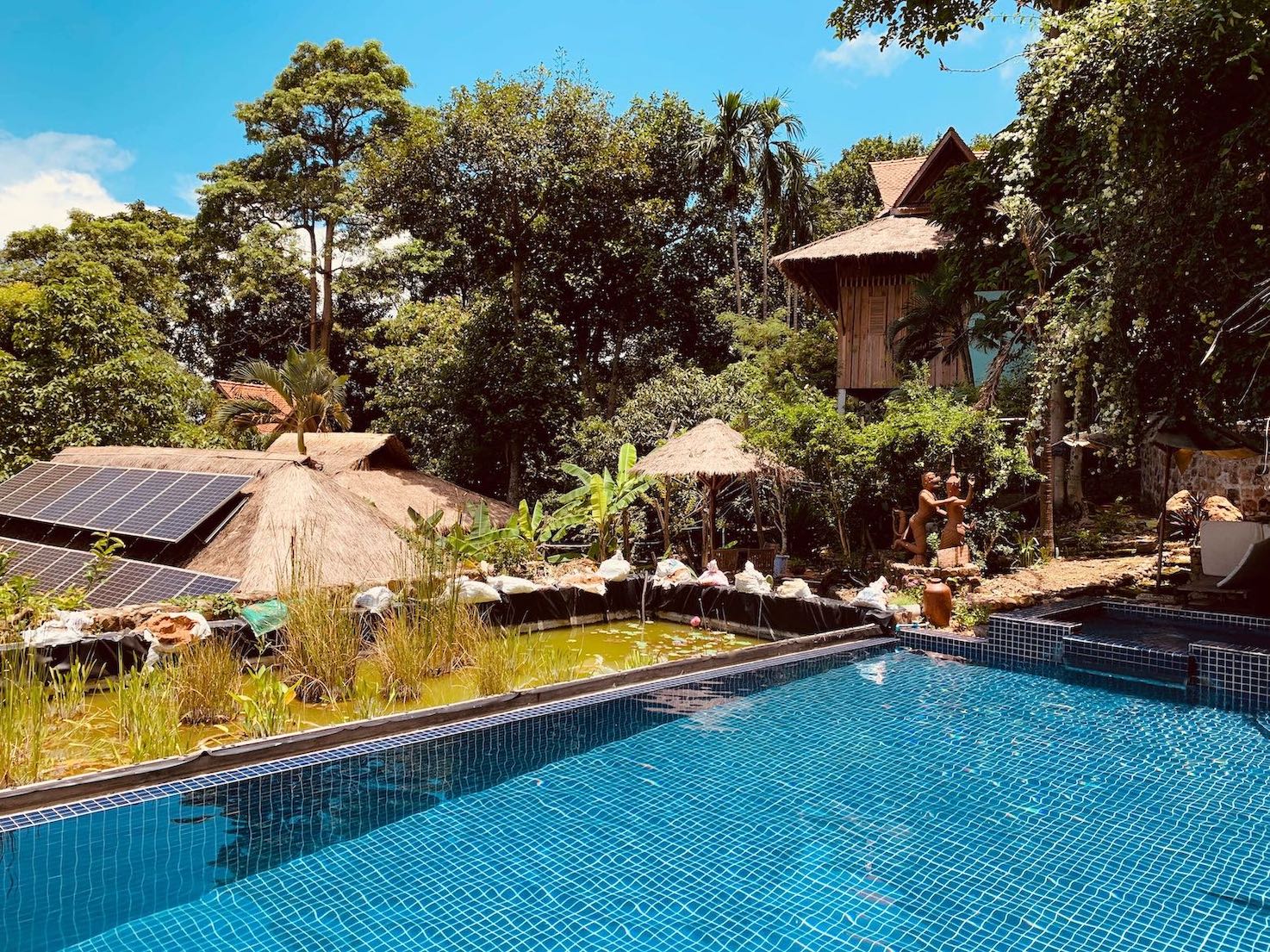 This French owned boutique hotel claims to be Kep’s first ecological lodge, offering a number of rustic bungalows and suites in a lush tropical garden. There was no sign of life that day as we wandered in through the open gate, following the garden path down to the vast swimming pool. 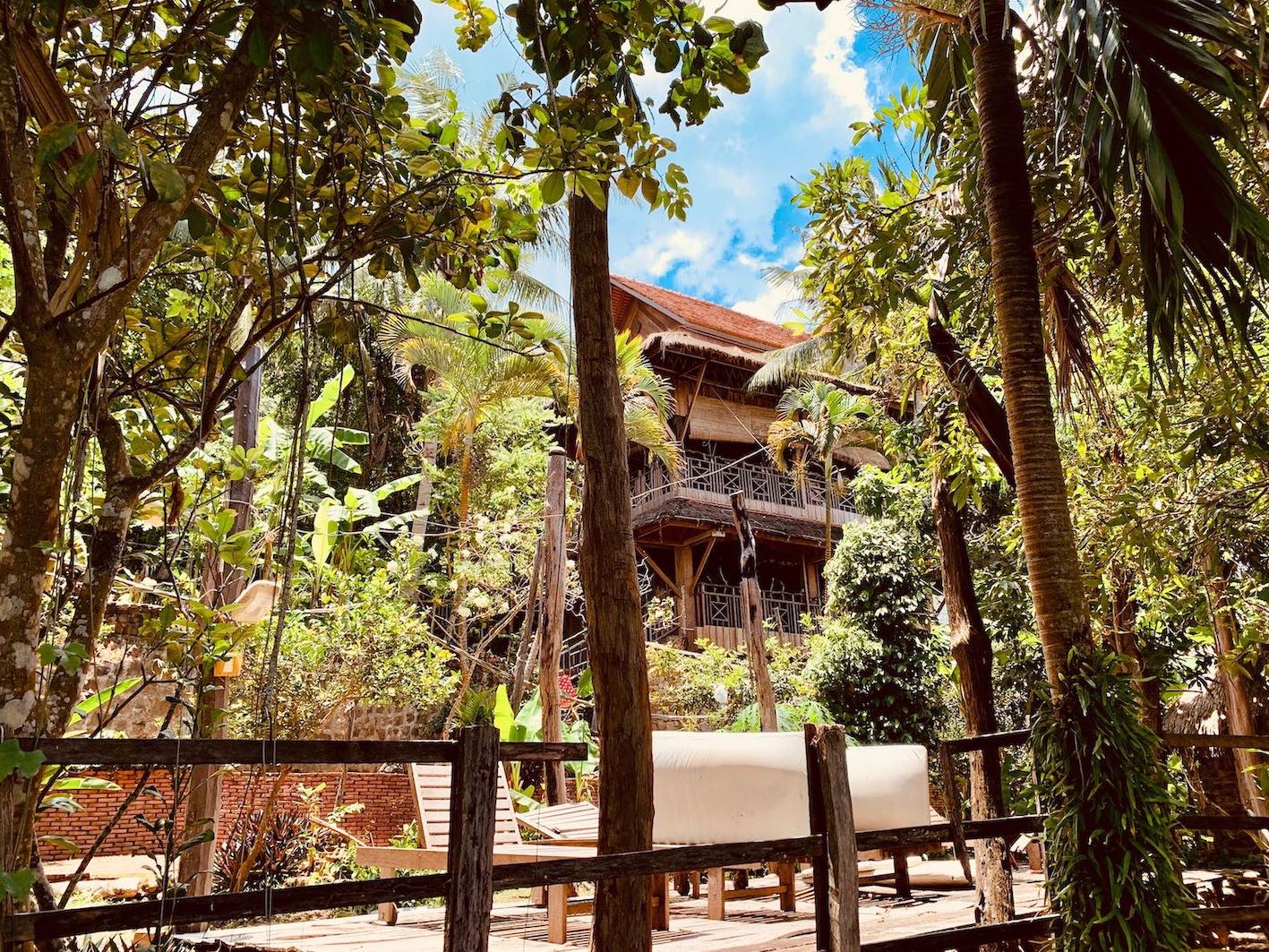 The End of the World Hotel.

Charmed by the beauty and perfect silence of the place, we decided to scale the wooden staircase up to the hotel’s restaurant and bar. There, we found ourselves greeted by a surprised looking Khmer lady and her dog.

“Do you have any guests now?” I asked, wondering how on earth they were surviving with virtually no tourists. “Mm.. maybe one or two” came her vague reply. 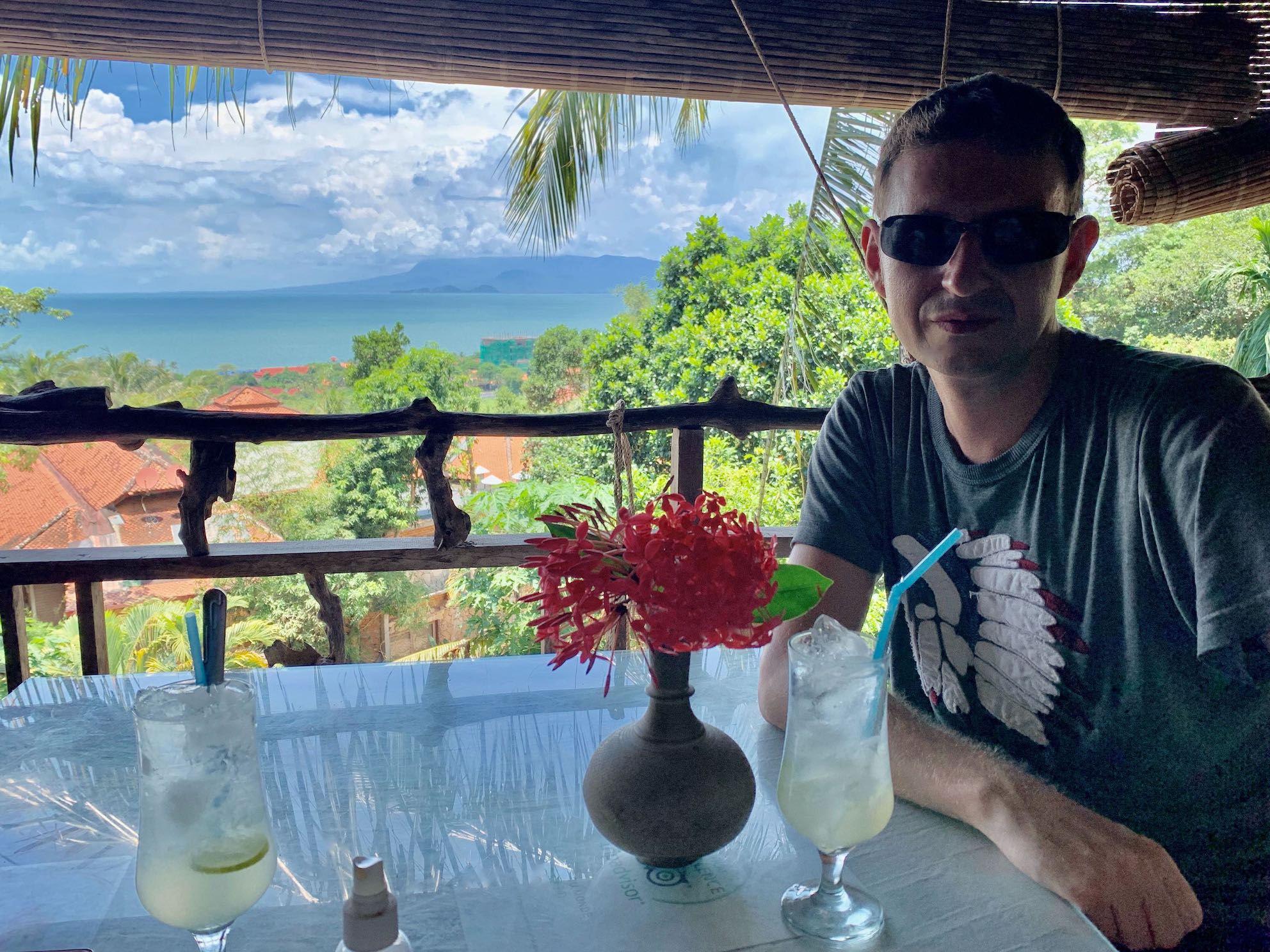 The views over Kep were so lovely we ordered a couple of lime juices and stayed for a bit. With a light breeze on our faces, the jungle and sea stretching out before us, it would’ve been easy to give up on the hike. Maybe just order a bunch of dishes and settle in for the day. 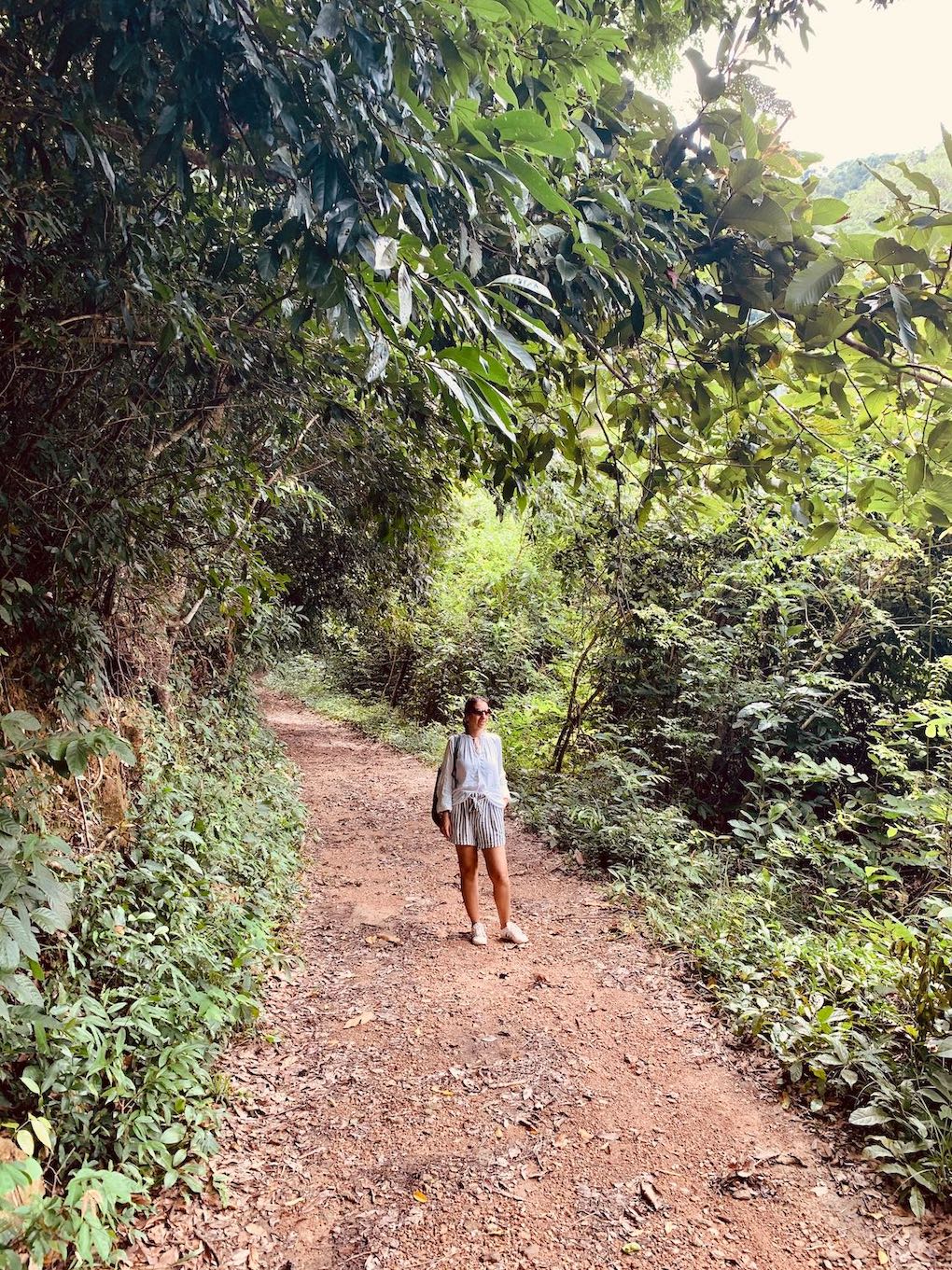 Back on the trail and for the most part it was just us and mother nature. Sticking to the main path, we walked and walked and walked, looking out for the yellow signs. But they were few and far between and what we didn’t realise was that some of the main sights are hidden away in interior trails that run right through the jungle. 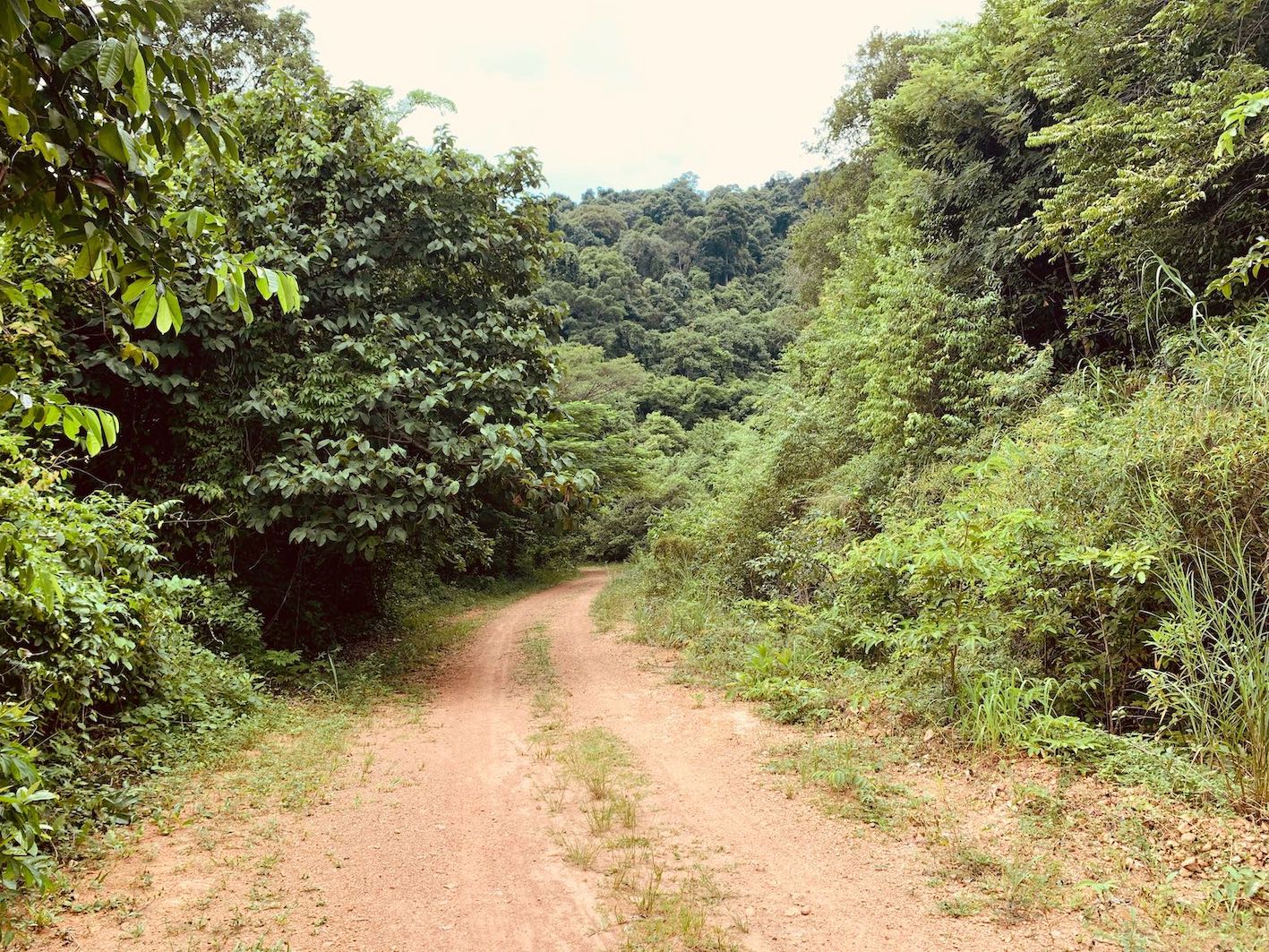 These trails are so discreet we missed several of them altogether, while a later opportunity to cut in proved too wild. If only we’d come with long pants, long sleeves and maybe a stick, we could’ve made a fist of it. If you’re planning a visit, and want to see Sunset Rock, The Little Buddha and The Stone Horse, come prepared and look out for the little clearings between the trees. #regrets 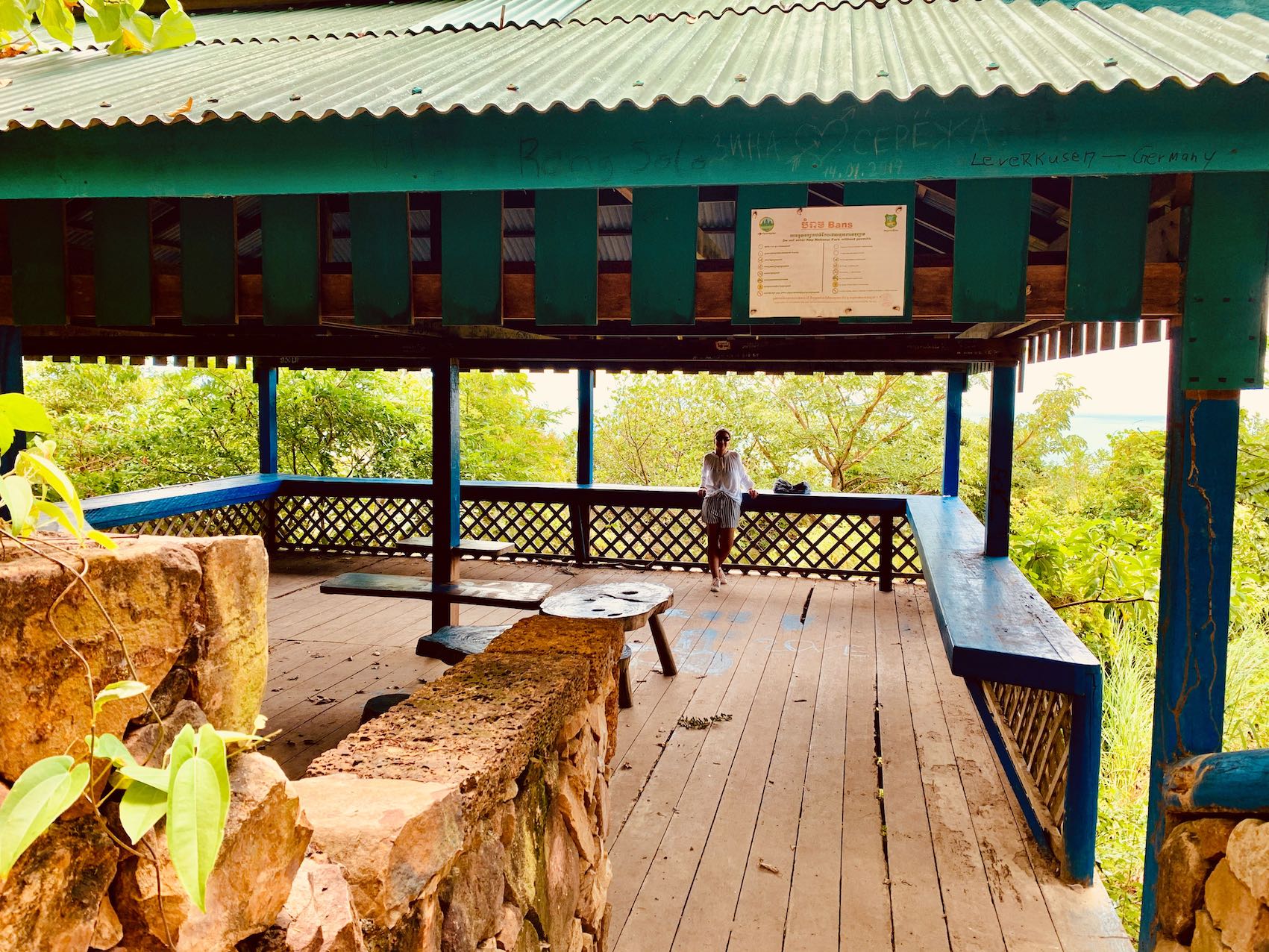 Despite the disappointment of missing out on the jungle spots, we enjoyed our hike around the outer trail. After a while we came across this wooden gazebo, an opportunity to stop for a breather and guzzle some water.

It appeared to have once been a cafe of sorts. Indeed there were a few empty drinks cabinets and a serving counter covered in leaves and dead bugs. I guess Covid put pay to all that. 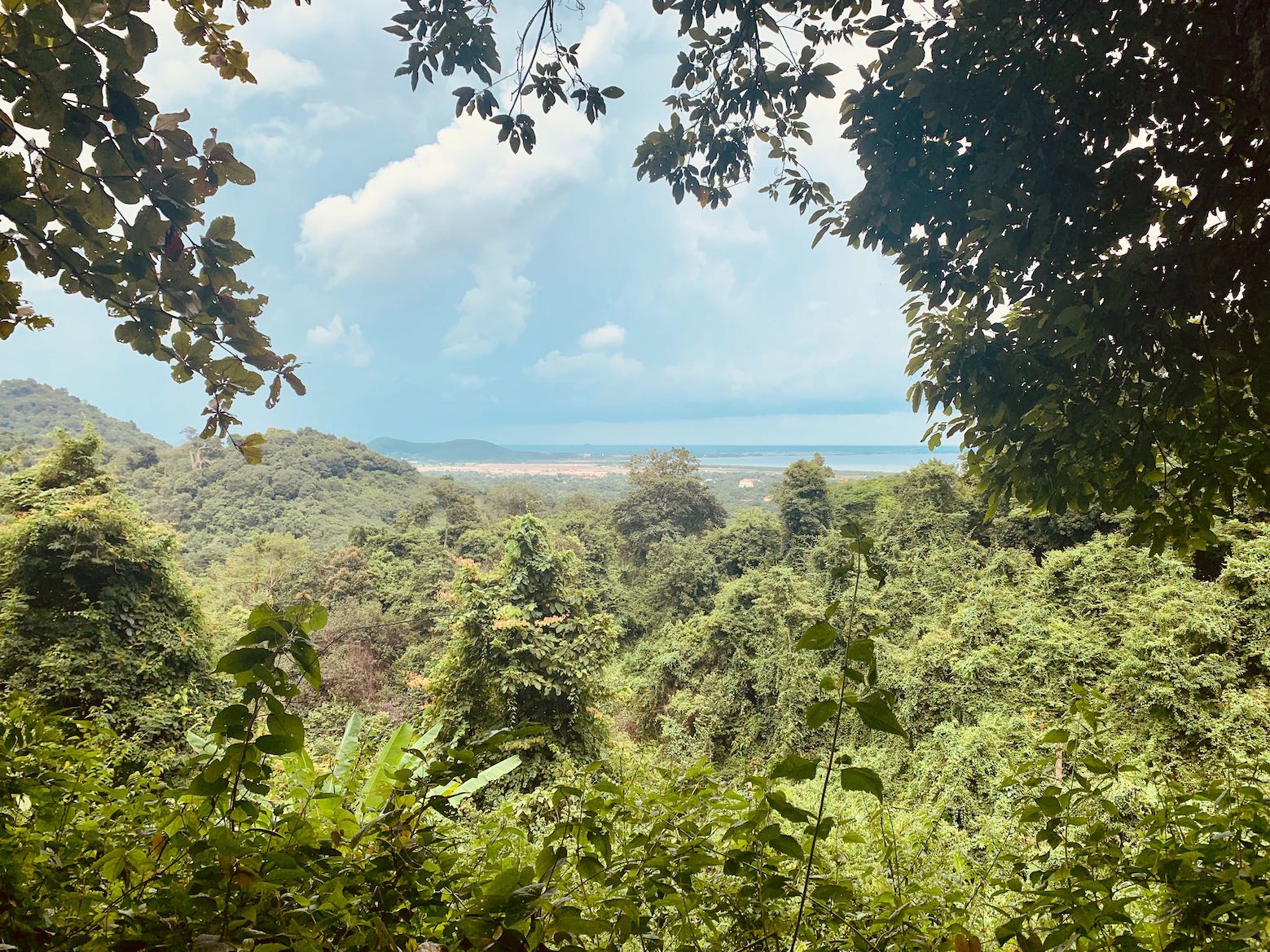 Eventually, our efforts brought fine views through openings in the dense greenery. We were pretty far away, but there was the unmistakable outline of Kep Beach and the turquoise blue of Chhak Kep Bay. 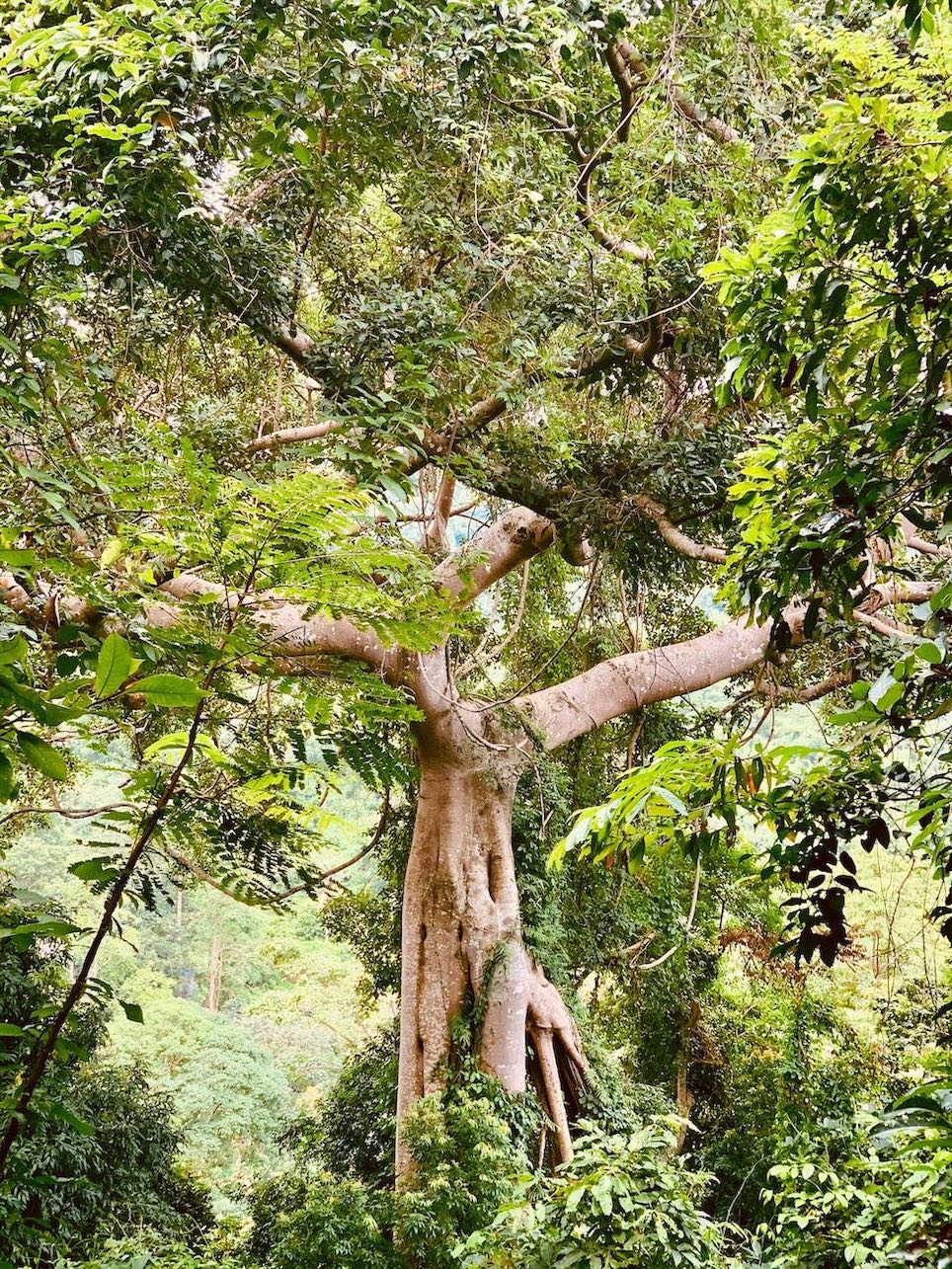 At long last we actually got to see something mentioned on the yellow signs. This is the park’s famous Arch Tree, a towering beast with unusual, twisting branches. 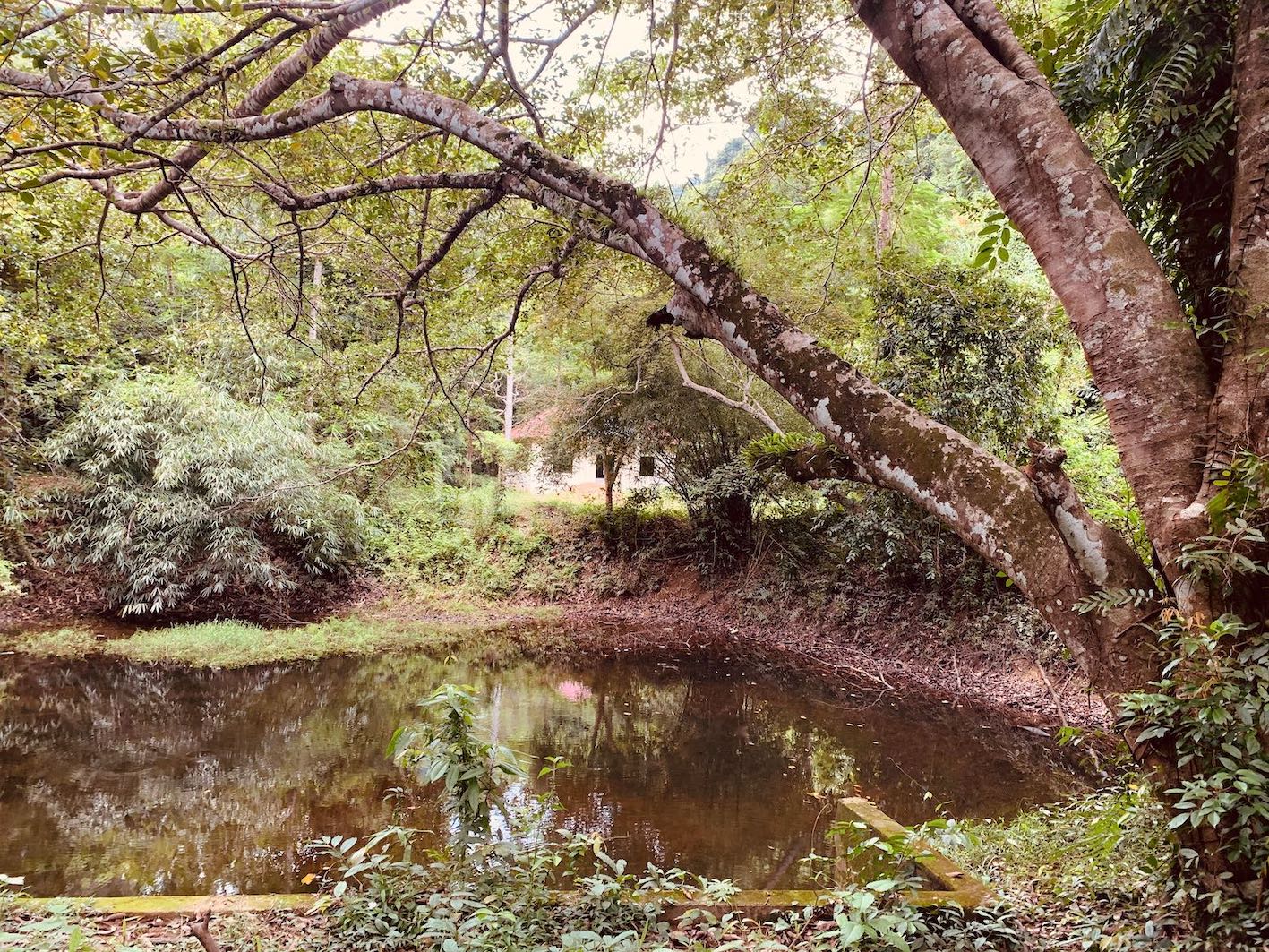 We also found a locked up ranger’s station tucked away behind the trees and bushes surrounding a large pond. It could have been a lovely spot to sit, had it not been for a conspicuous lack of benches and rampant insects. 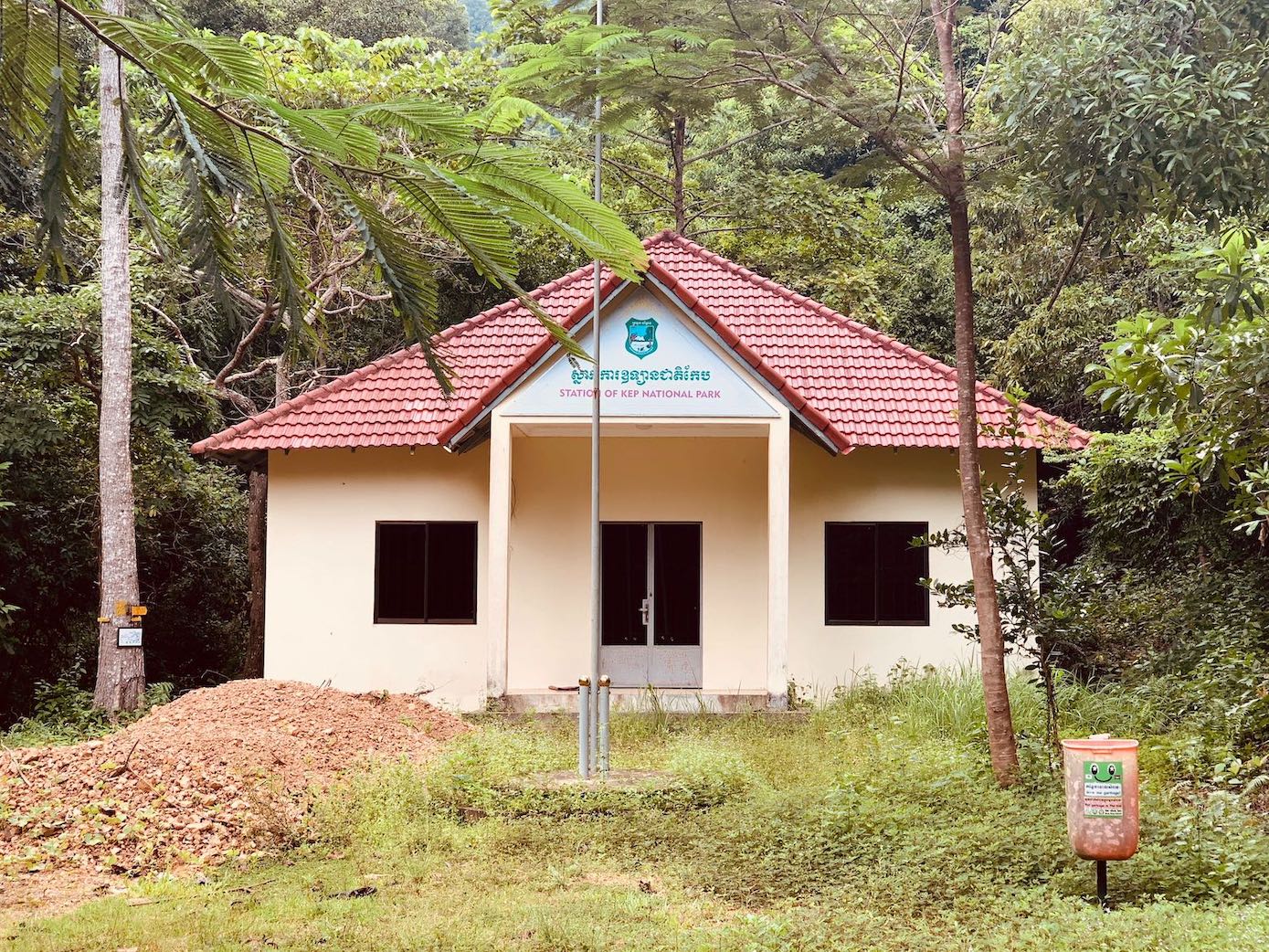 I was just concluding that the ranger had probably been furloughed when we came across a Khmer man walking down the trail picking up trash. Upon seeing us, he delivered a broad smile and a wave, though further communication proved impossible. 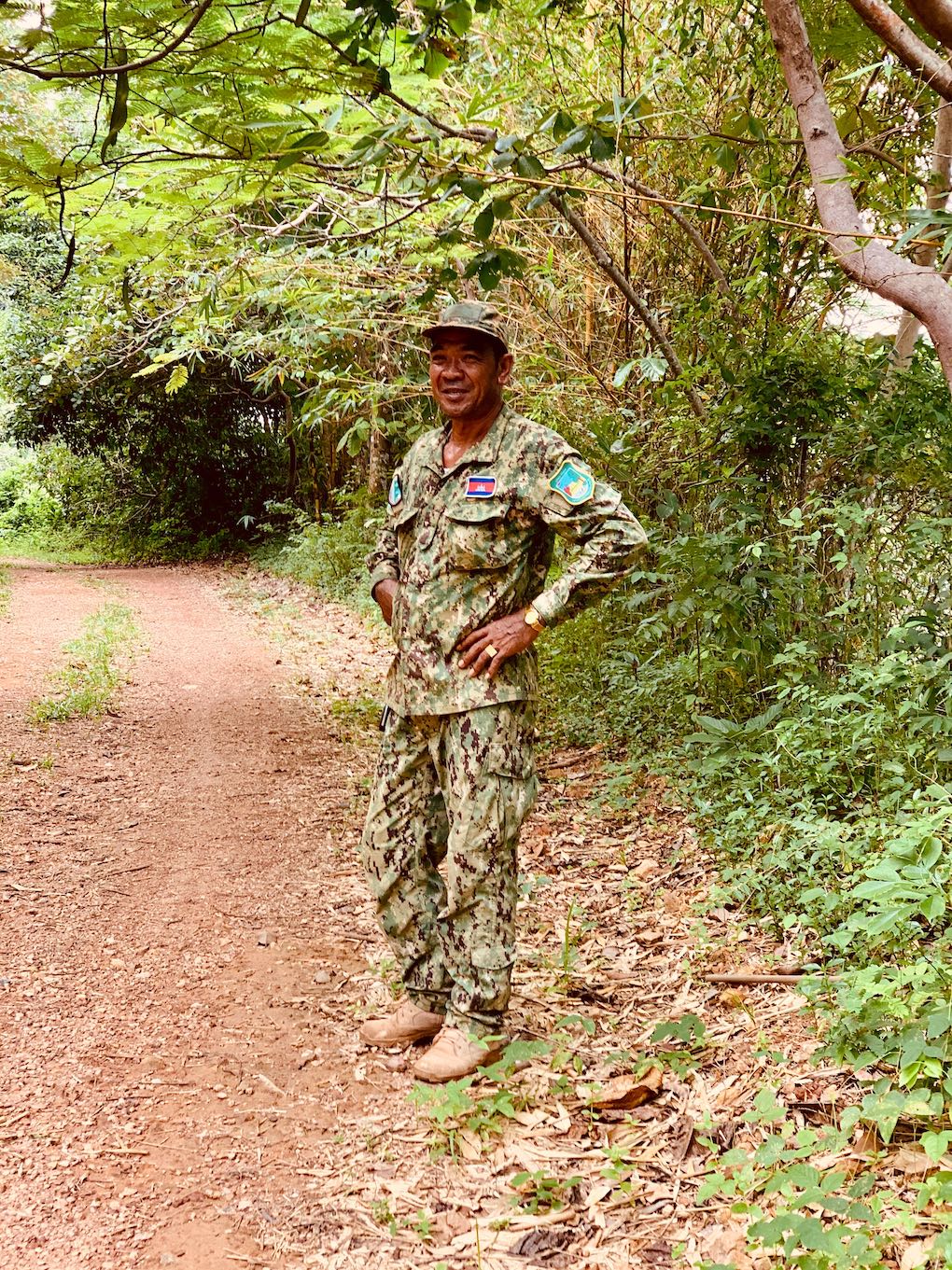 Luckily, he was with a young woman who could speak a little English. For reasons unknown, she was carrying a white flag over her shoulder. She too proved very friendly and genuinely wanted to help us find another route up to the interior jungle sights. Unfortunately, it seemed we really would have to retrace our steps for an hour back to one of the earlier clearings. 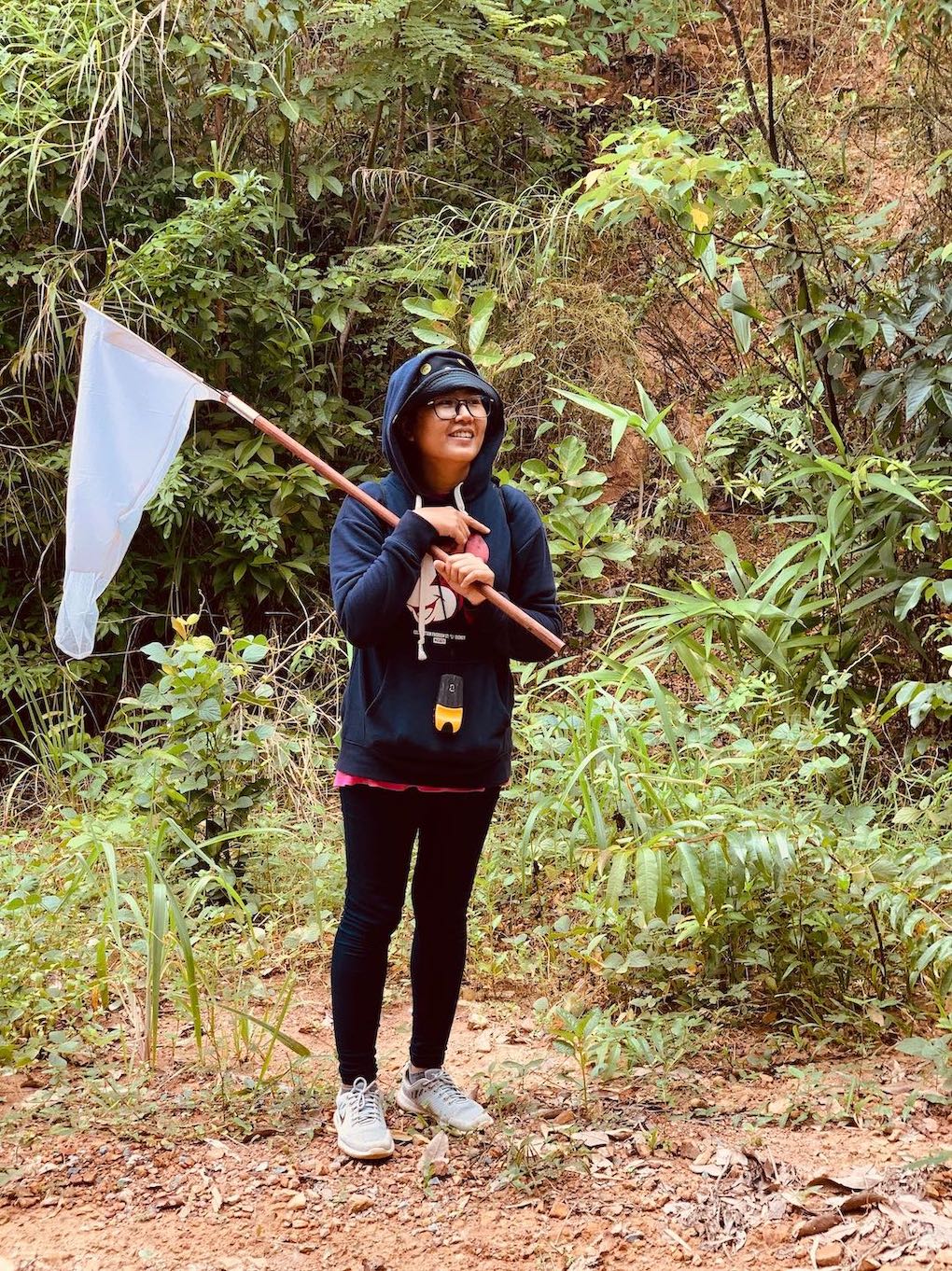 Instead of going back on ourselves, Sladja and I were more interested in reaching a distant pagoda nestled in the hills. Consulting with Google Maps, it appeared to be a Buddhist temple complex called Samathi Pagoda. 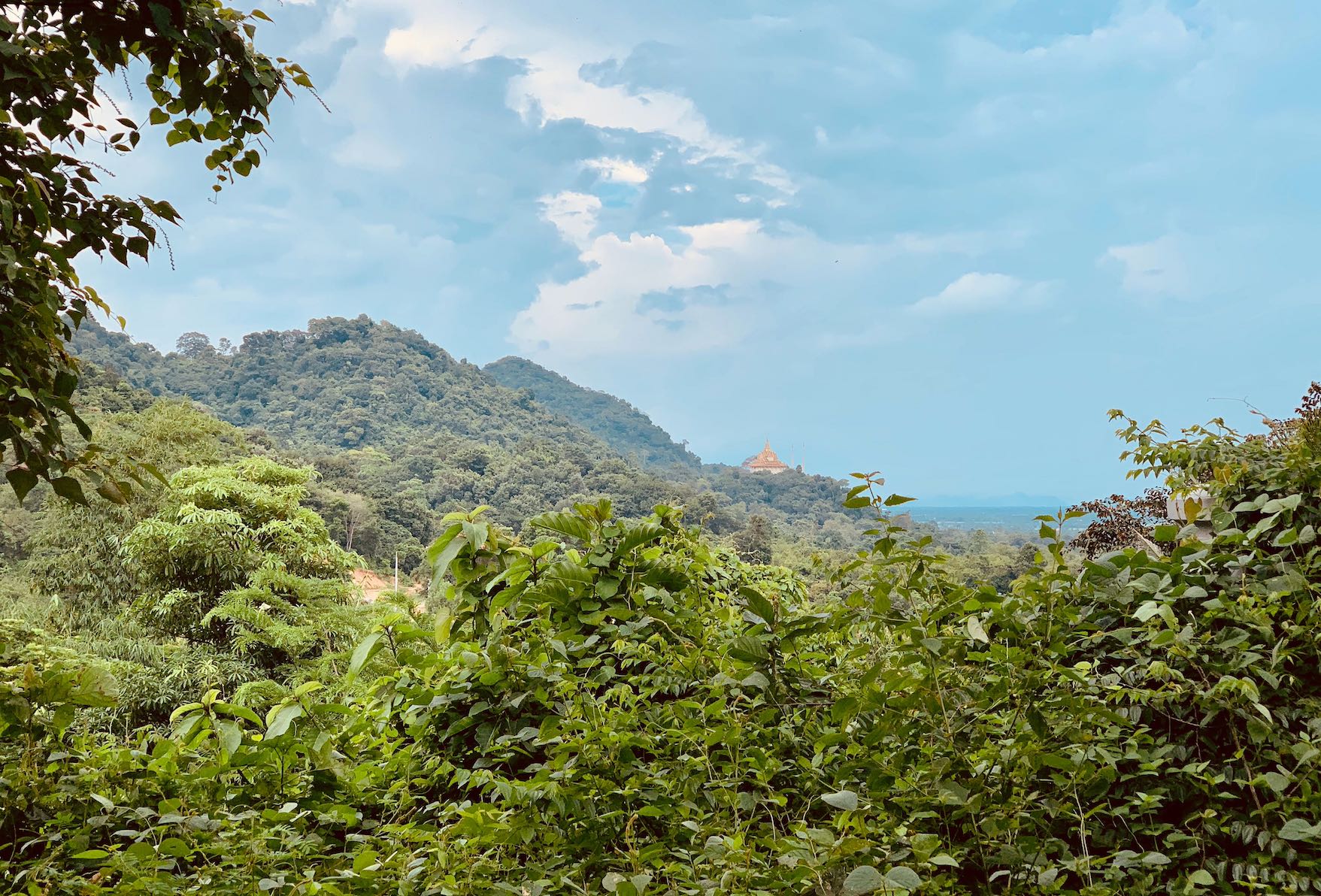 It looked like a spectacular location, though from what I could gather we’d be facing a further hour and a half on foot. What we needed was a lift, which definitely wasn’t going to materialise on the national park trail. Thus we put our heads down and pushed onwards until we came out onto the long and utterly deserted Bopha Prasidh Road. 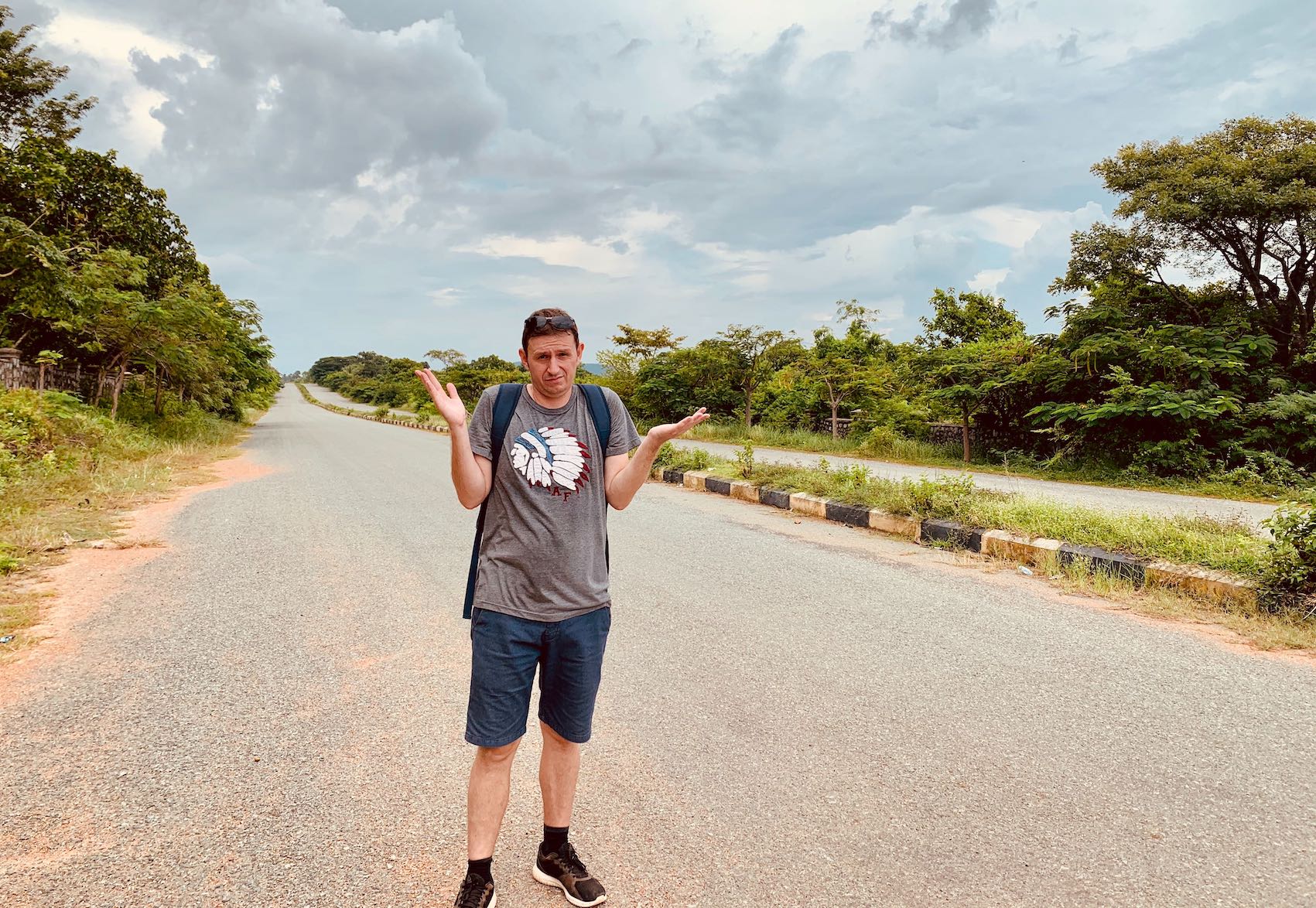 We hadn’t had much luck that day. Having failed to access the interior trails, I could only remain hopeful that Samathi Pagoda would serve as a memorable victory to salvage the day.

After nearly two hours of walking, we cut ourselves some slack and called for a tuk tuk. Around five minutes later our chariot arrived and we rumbled off towards our next Kep adventure. 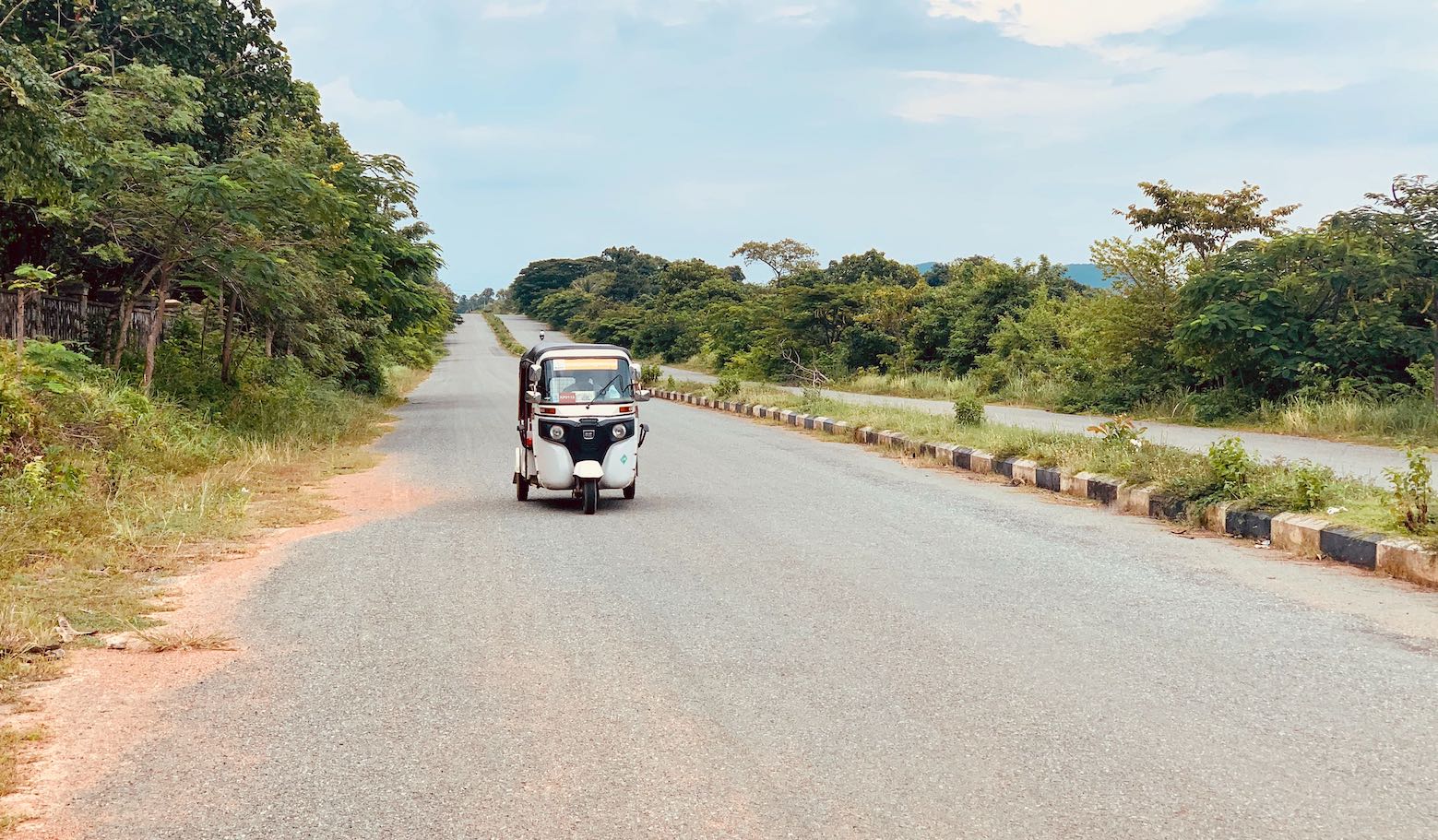