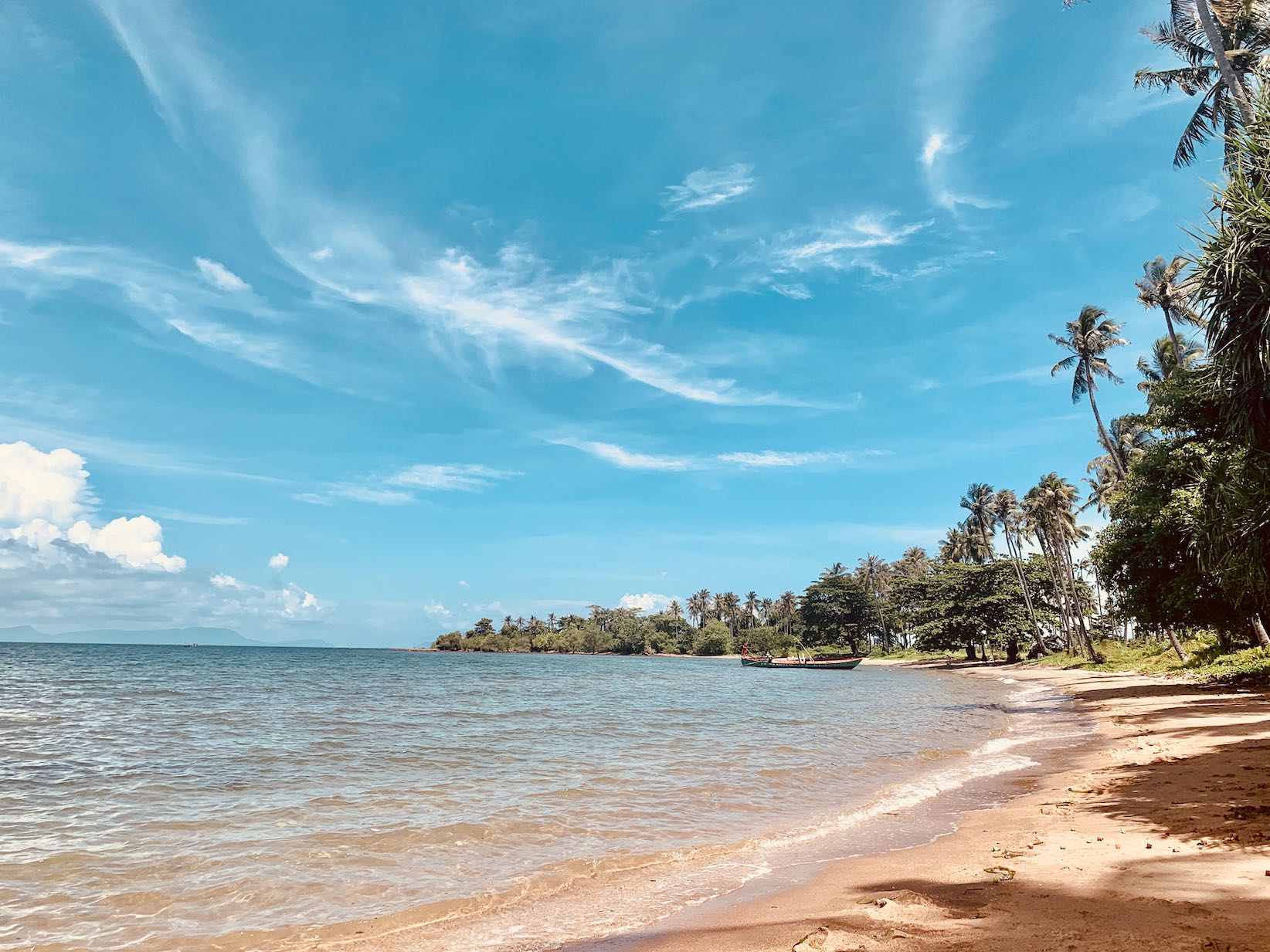 August 2020. It felt great to be finally taking our foot off the gas. While we had enjoyed all our field trips across Kep, for the most part each adventure had been quite the physical demand.

From The Crab Market and the abandoned villas to Kep National Park and Samathi Pagoda, there’d always been hiking involved, invariably in the unforgiving sun and sapping humidity. Now, at long last, it was time to take it easy and recharge with a day on Rabbit Island. 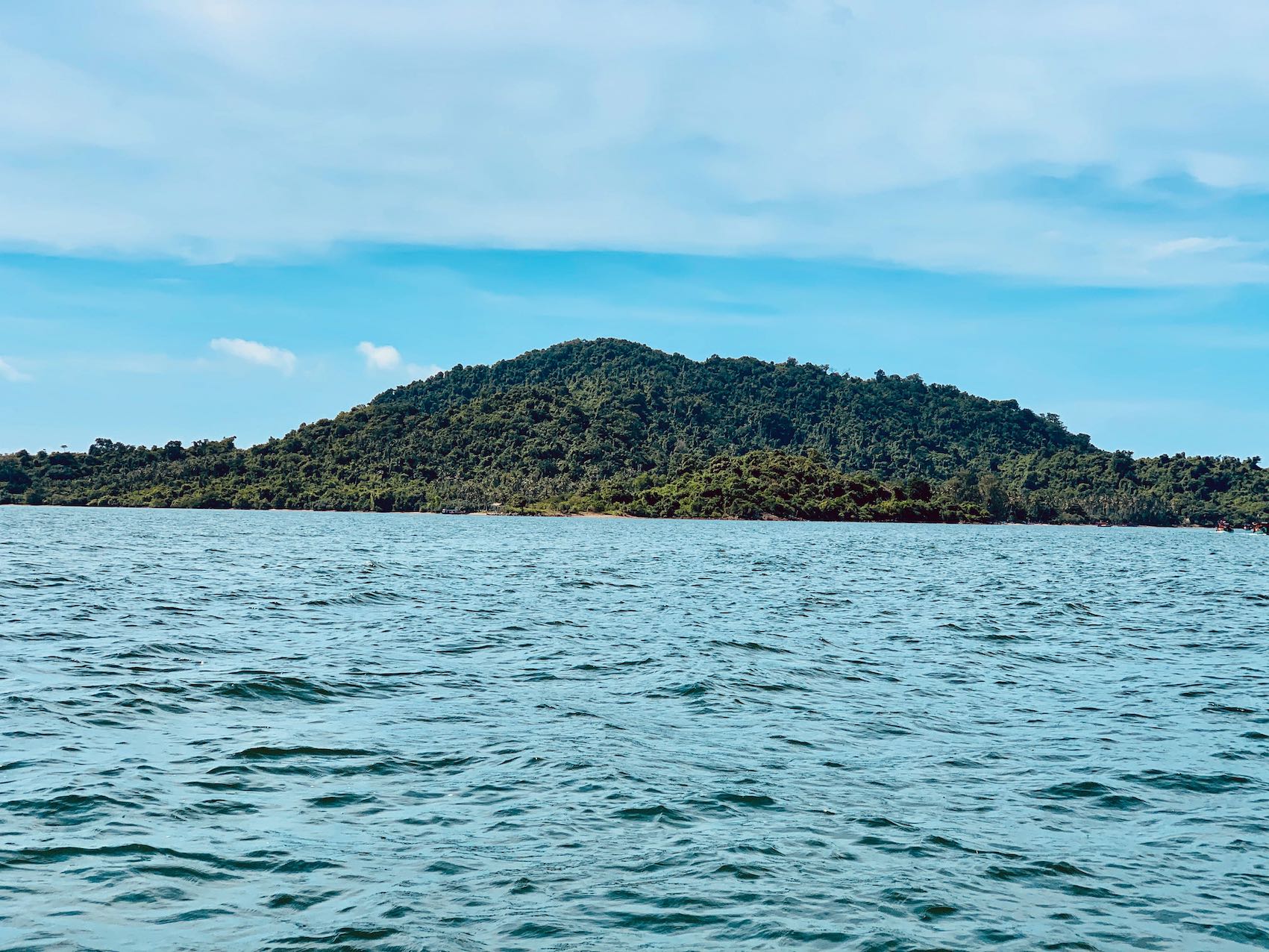 Located just four kilometres off the town of Kep in The Gulf of Thailand, Rabbit Island (Koh Tonsay in Khmer) is a tiny land mass with an area of just two square kilometres. Back in the 1950s and 60s the island operated as a rehabilitation centre for convicted criminals, though no traces of those days remain.

Buoyed by the promise of white sandy beaches and a distinct lack of tourists during COVID times, we set off from Kampot in a tuk tuk bound for Kep Pier. 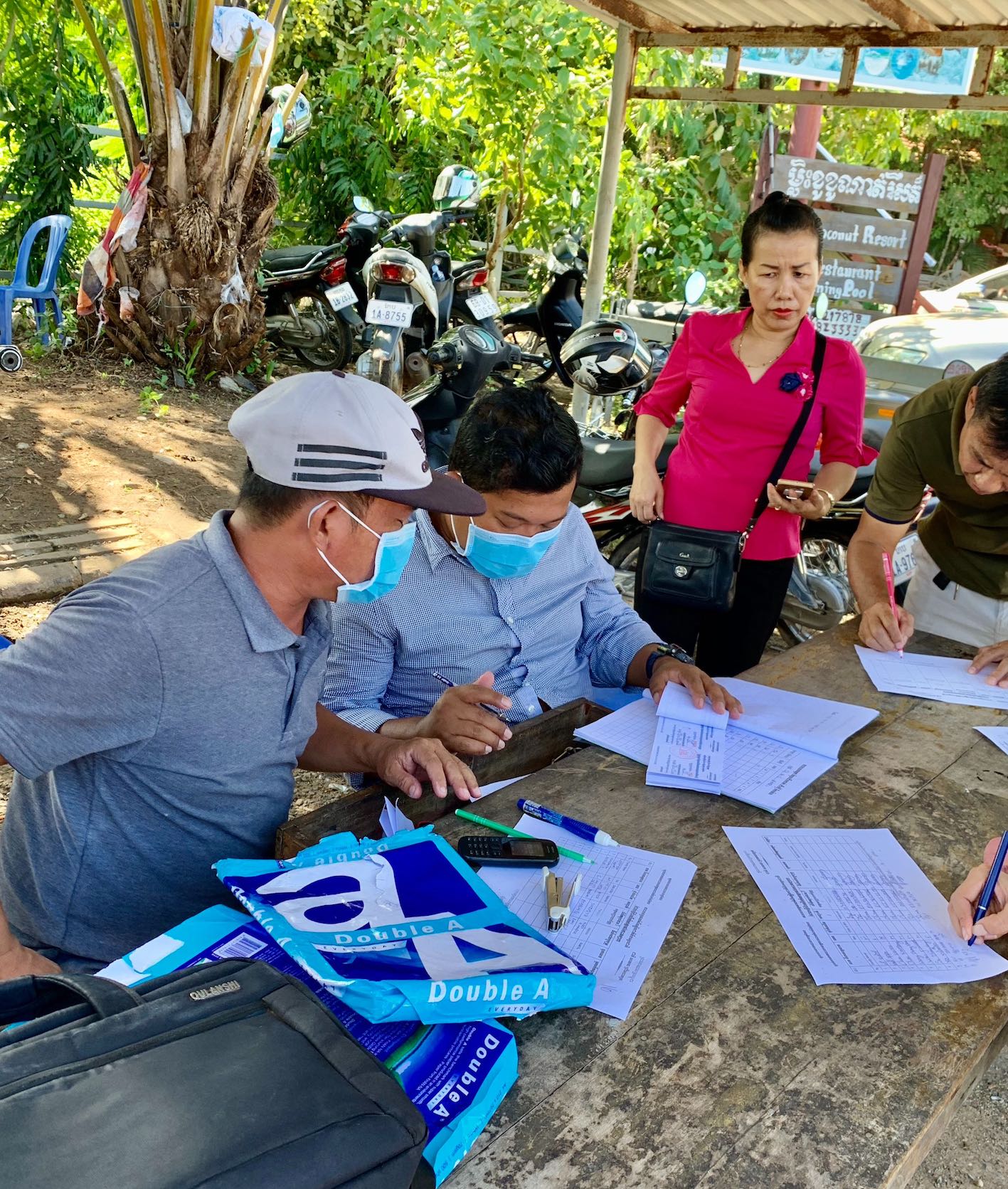 On arrival, we saw that the so-called ticket office was little more than two guys sat at a wooden table. “Next boat one hour” said one of the masked men. “Or… you take private boat, go now”. 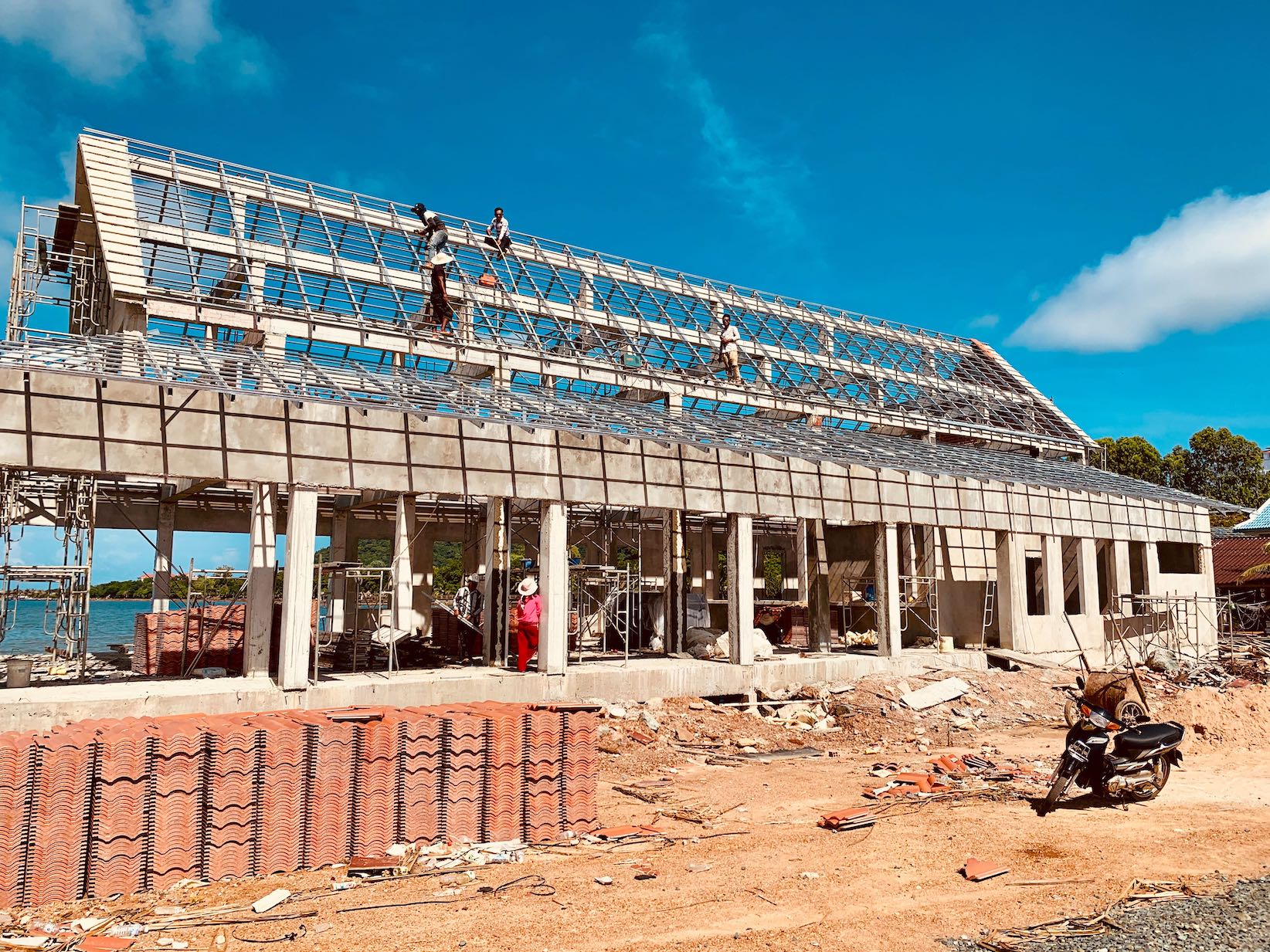 It took us about five seconds to decide we wanted the “go now” option. After all, the pier didn’t even have a sheltered waiting room. That, it appeared, was still being built. 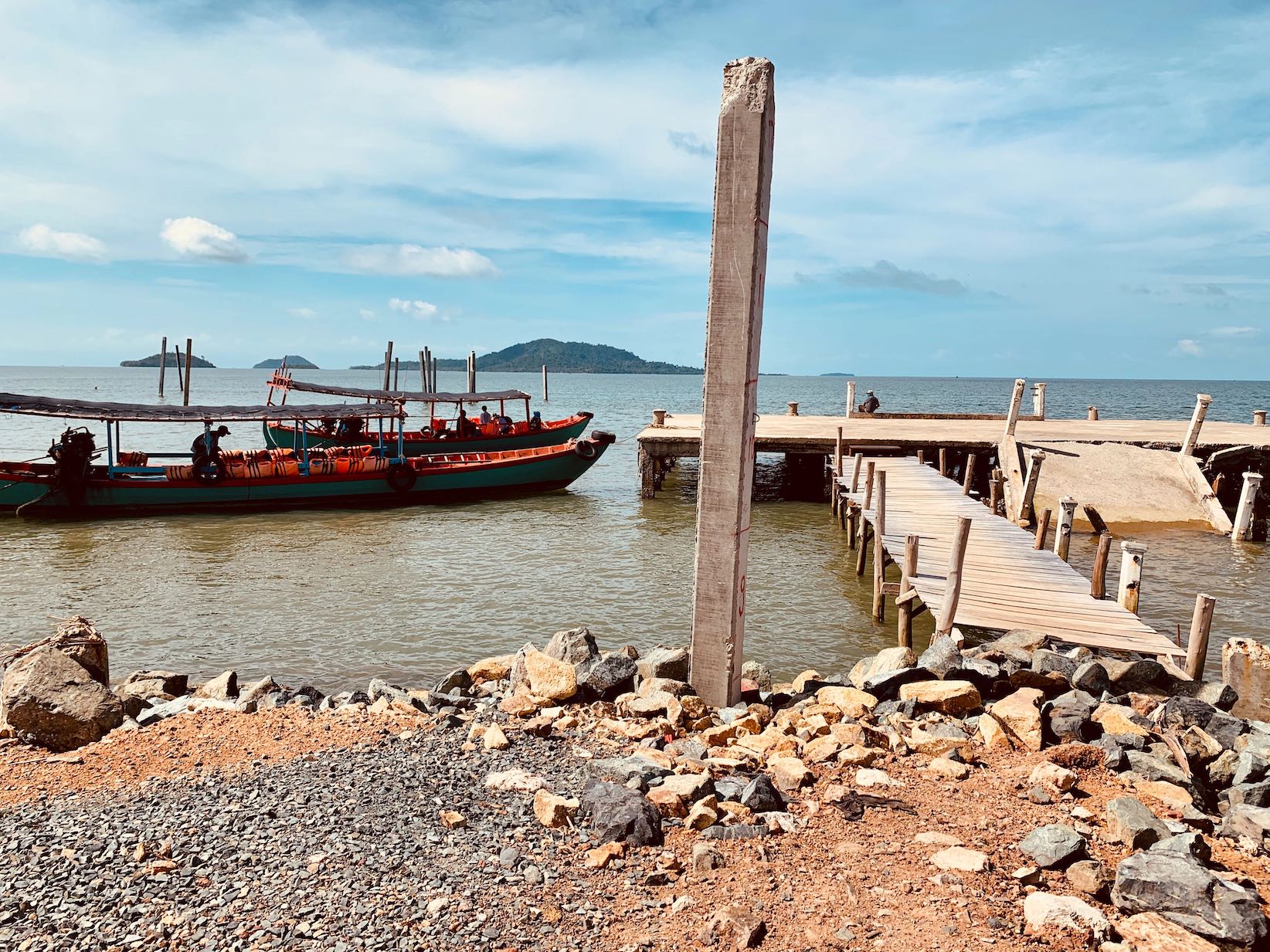 Hence we paid the guy his requested $20 for a day return and off we went towards the only boat down by the rickety wooden boardwalk. We should’ve negotiated of course, but we couldn’t be bothered.

It was such a lovely day and I remember feeling blessed that we were about to head into The Gulf of Thailand on a private boat trip at a time when half the world was in lockdown. For that, Mr. Man could have his $20. 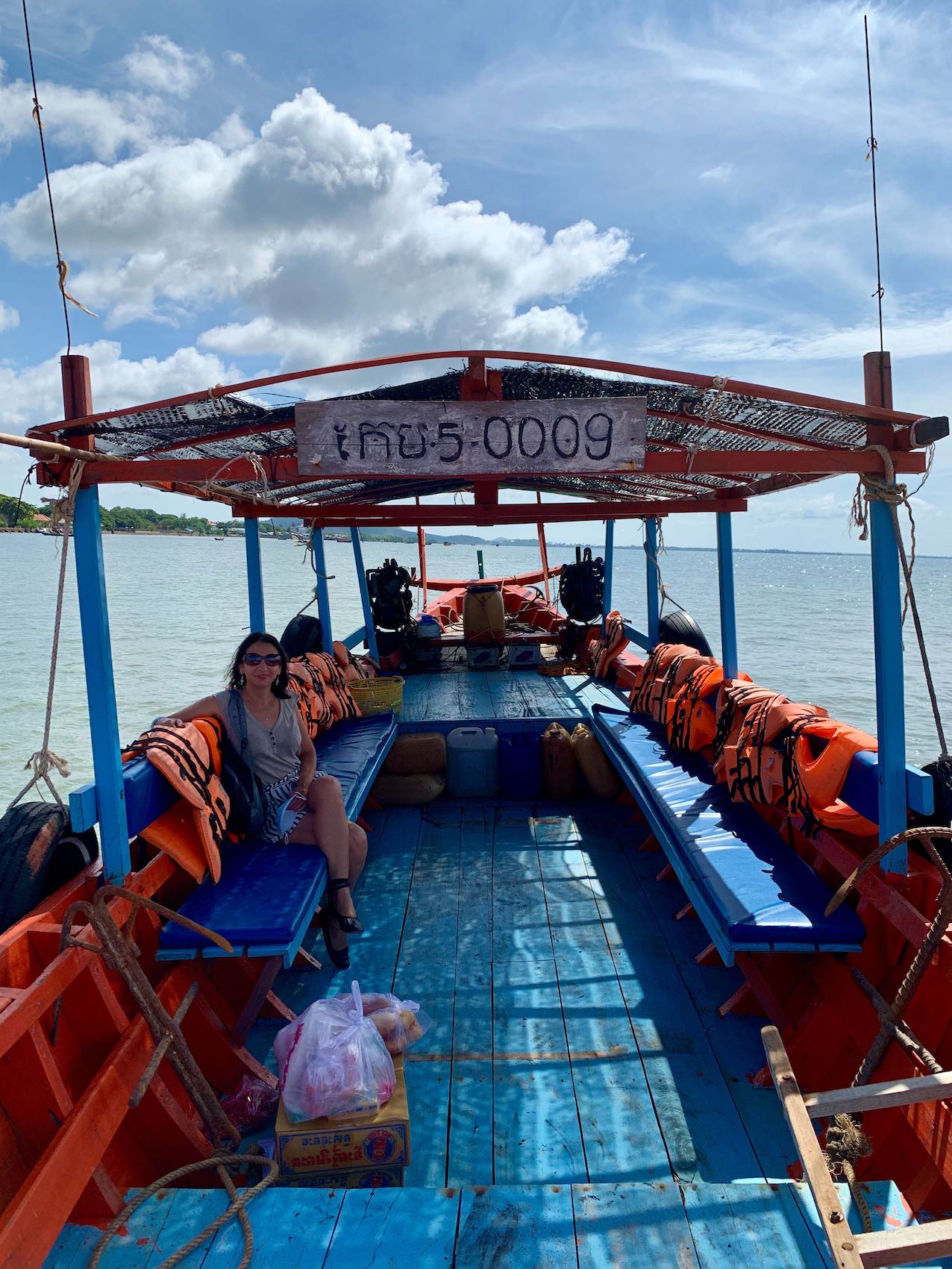 All aboard for Rabbit Island, Cambodia!

Climbing aboard, we exchanged brief greetings with the surly old boat captain. Communicating with us through occasional grunts and sharp, impatient gestures, he was not a pleasant man. Having dragged a number of bulging fruit boxes onboard, he noisily cleared his throat, spat into the water and fired up the engine. And then we were off! 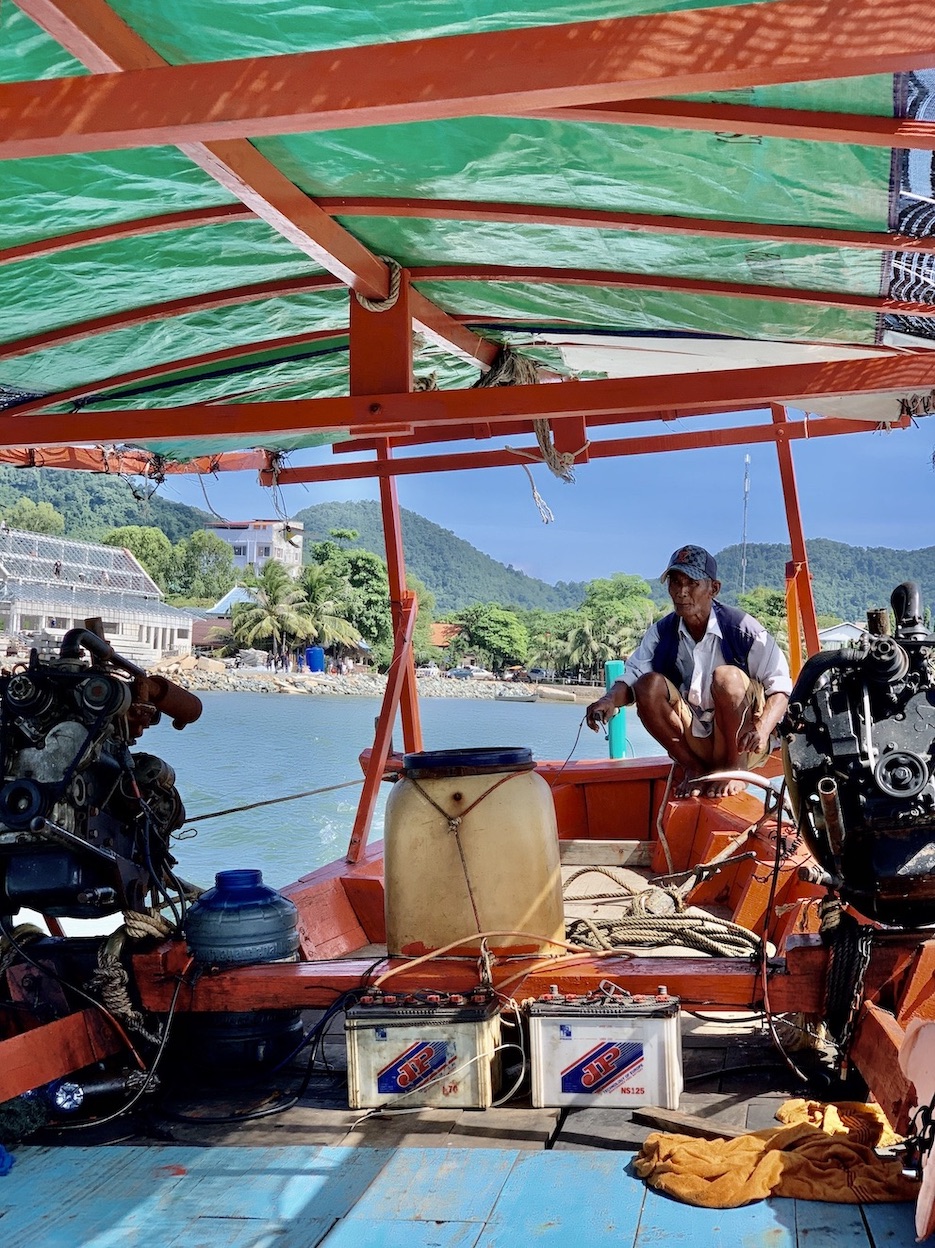 On the way to Rabbit Island, Cambodia.

The crossing from Kep Pier to Rabbit Island took a brief but joyous twenty five minutes. For the first time in weeks it felt great not to have anything to think about. No Google maps to study, opening times to check or historical info to pin down. 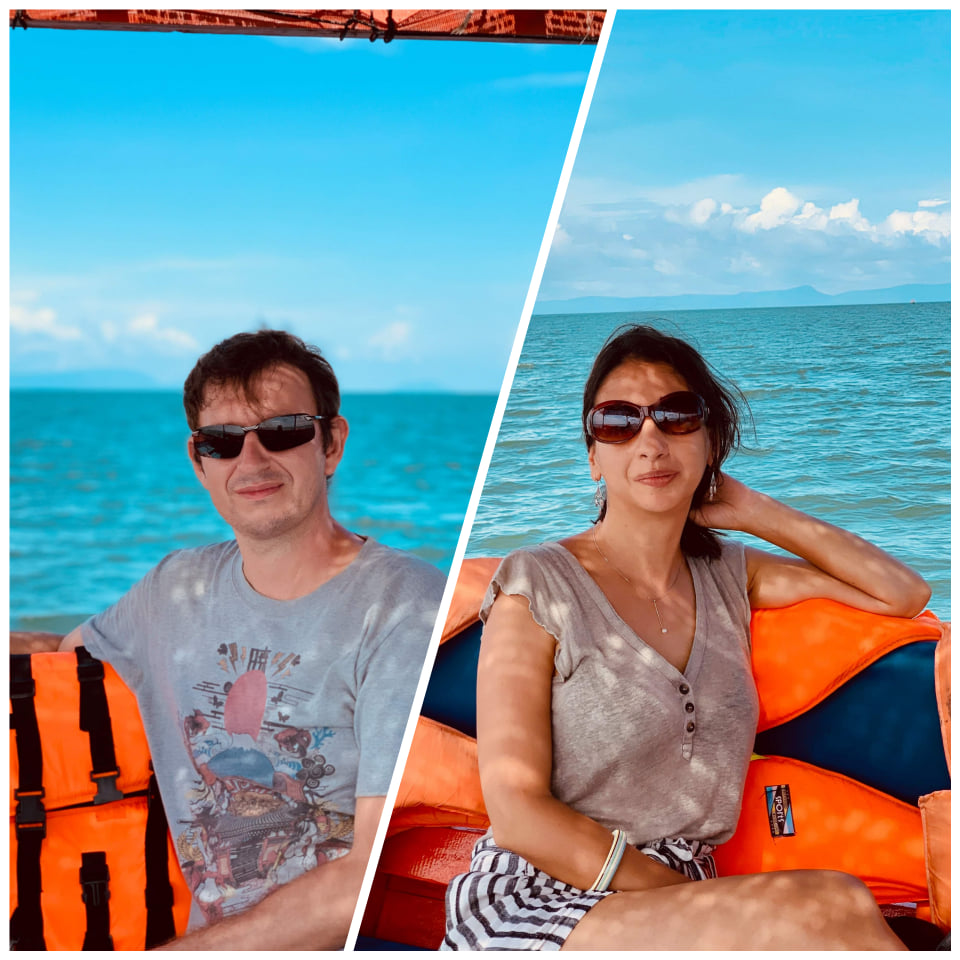 It was just us, on a boat, feeling the wind rush through our hair as we motored through the alluring turquoise waters. Blue skies… fluffy clouds… not even our grumpy captain could sour the experience.

Getting off the boat was fun. Captain Cranky didn’t even bother to provide us with a stepladder, let alone any assistance. Thus we found ourselves having to perform a kind of half jump into the water. But then, wading to land, we immediately felt the rewards of Rabbit Island’s pretty and perfectly peaceful 250-metre main beach. 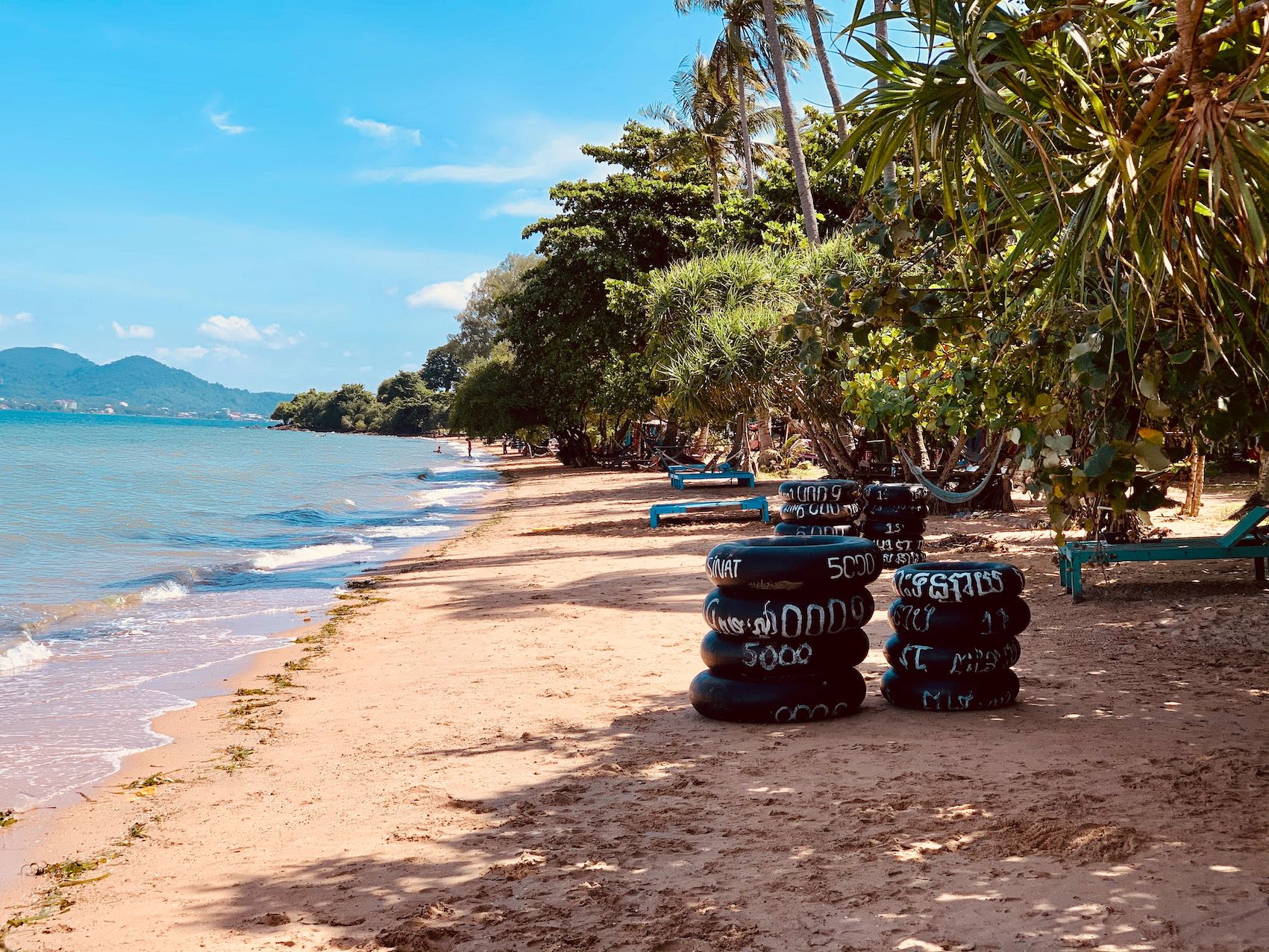 Unencumbered by the trappings of mass tourism, Rabbit Island is a genuine tropical escape from the world as you know it. Wandering down the beach that day, we realised there were no hotels. Just a short line of bungalow guesthouses set behind the palm trees. 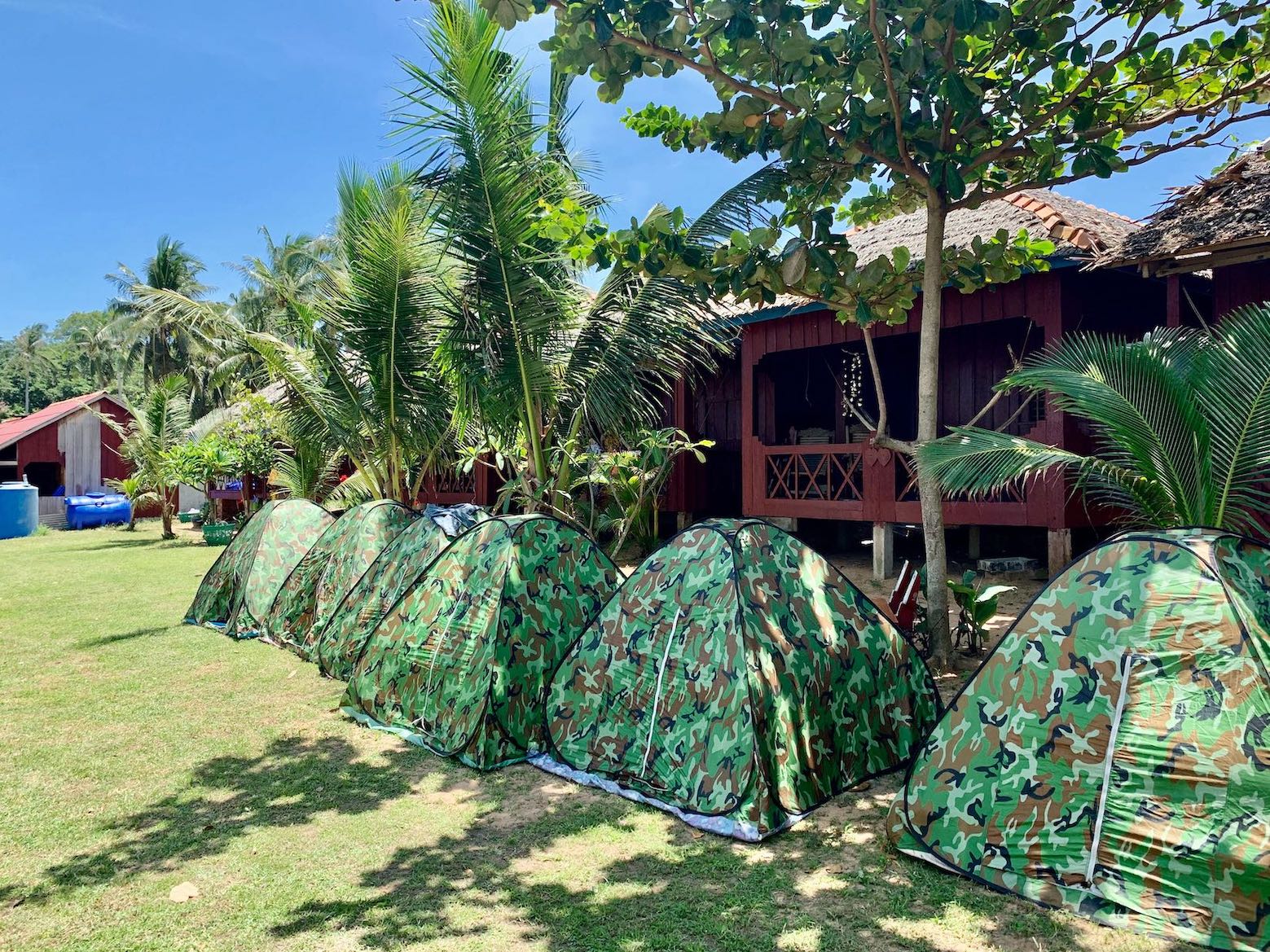 For those on a tight budget, there are also tents for hire, or you can bring your own and pitch up in a free spot.

Here and there, Khmer families picnicked under the protective leaves of the palm trees. Some ordered from the scattering of restaurants on the beach. Others came armed with their own barbecue kits, in addition to bags of fresh fruit and veg, a cooler box for the meat. 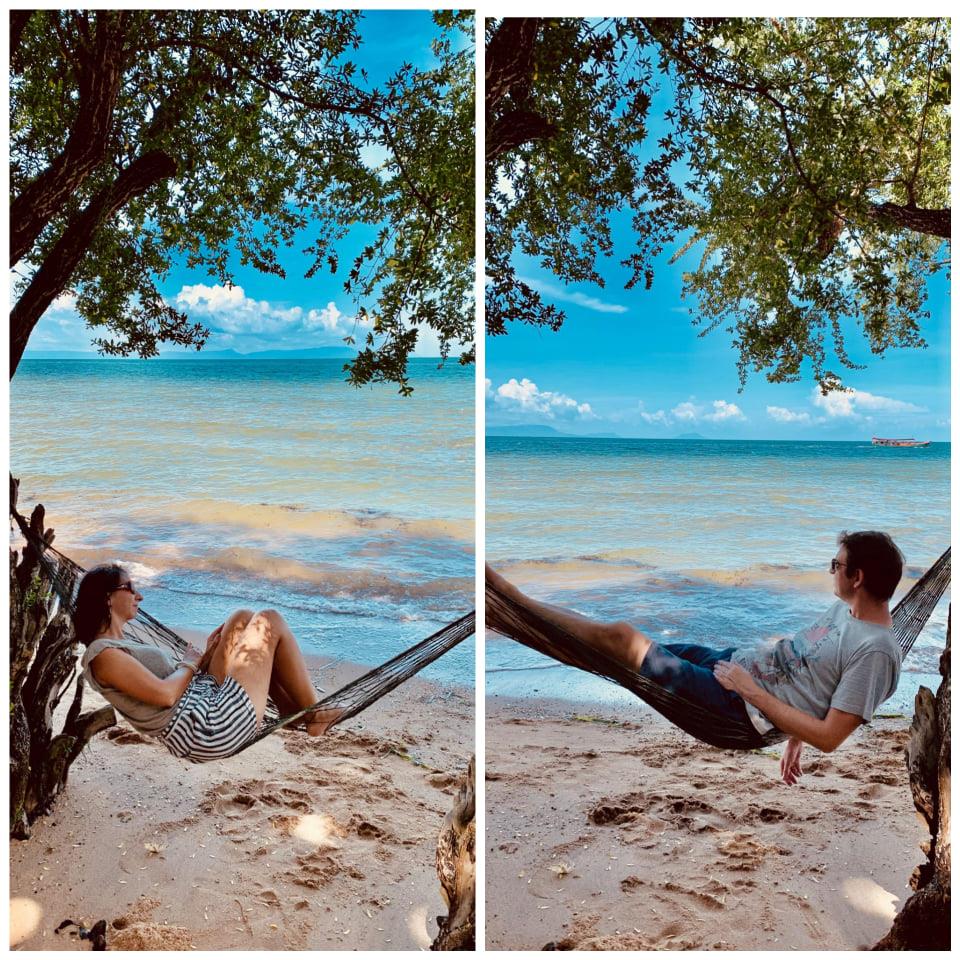 Towards the end of the beach, we came across a perfectly positioned hammock right by the water’s edge. A simply incredible spot to take a load off and stare out to sea. Highly Instaworthy, as the cool kids would say. 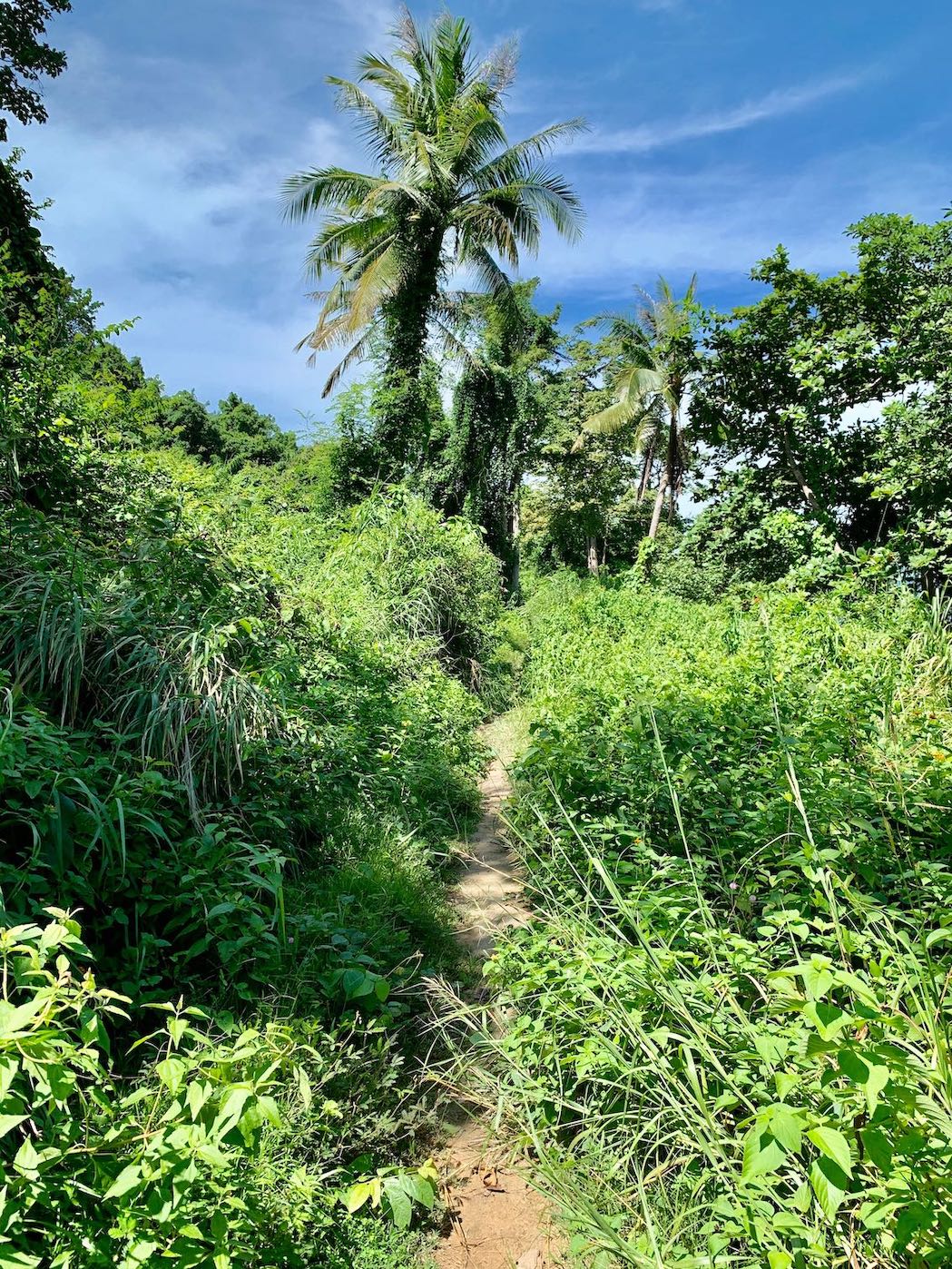 A mysterious path through the jungle.

We were just about to pick out a beach bar and settle down for the afternoon when I caught sight of a dirt track at the end of the beach leading into the jungle. Poor Sladja, from the moment I said “ooh, where does this go?” she sensed we were about to take a walk. 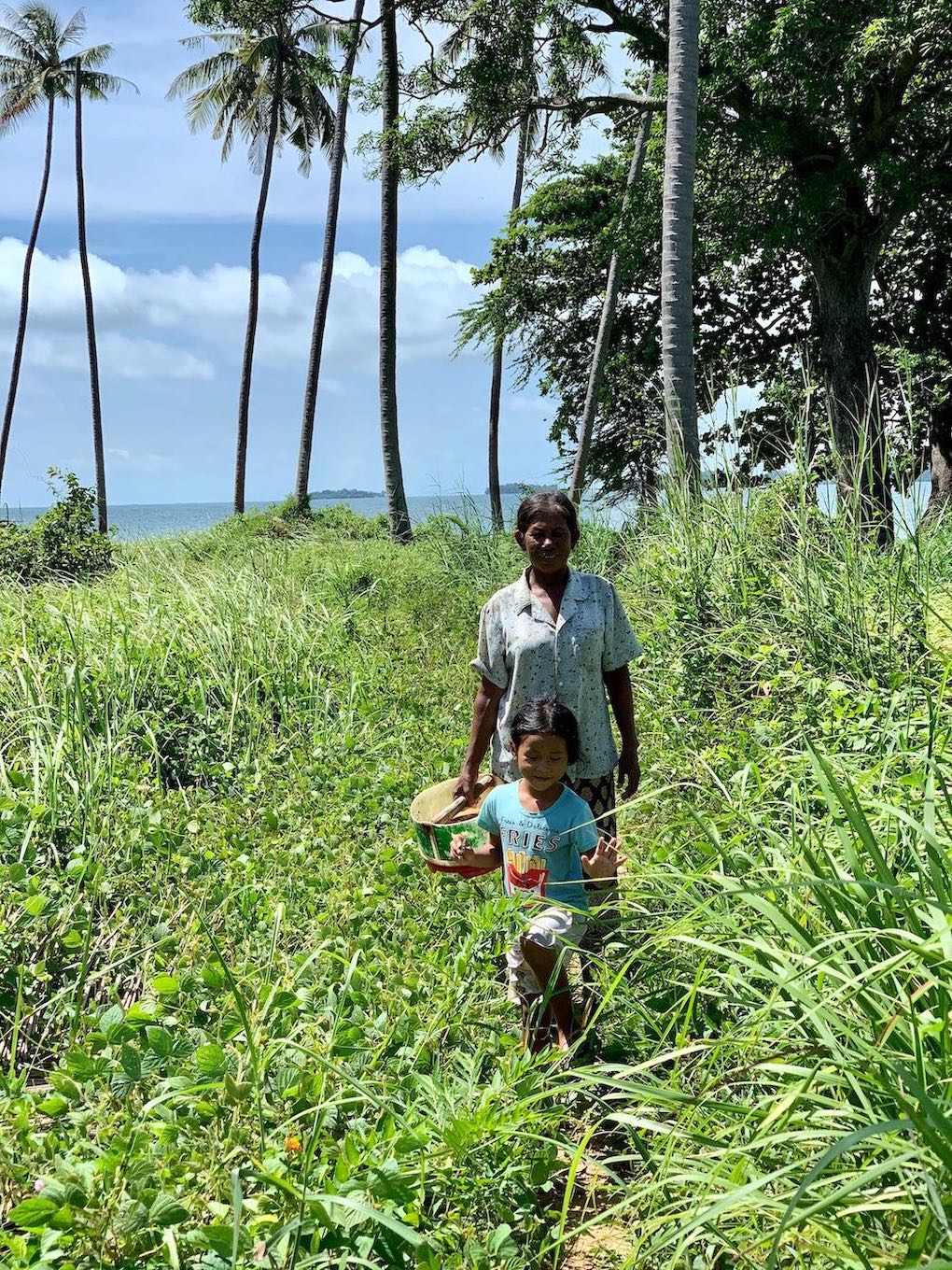 Not only that, but the track turned out to be really wild. With waist-length grass and bushes seemingly working against us, we fought our way forward, eventually passing a friendly grandmother and her little girl heading in the opposite direction.

Finally, around fifteen minutes after we’d set off, the path brought us to the entrance of a deserted beach. With not a soul in sight, it felt like we were the only two people on the planet. 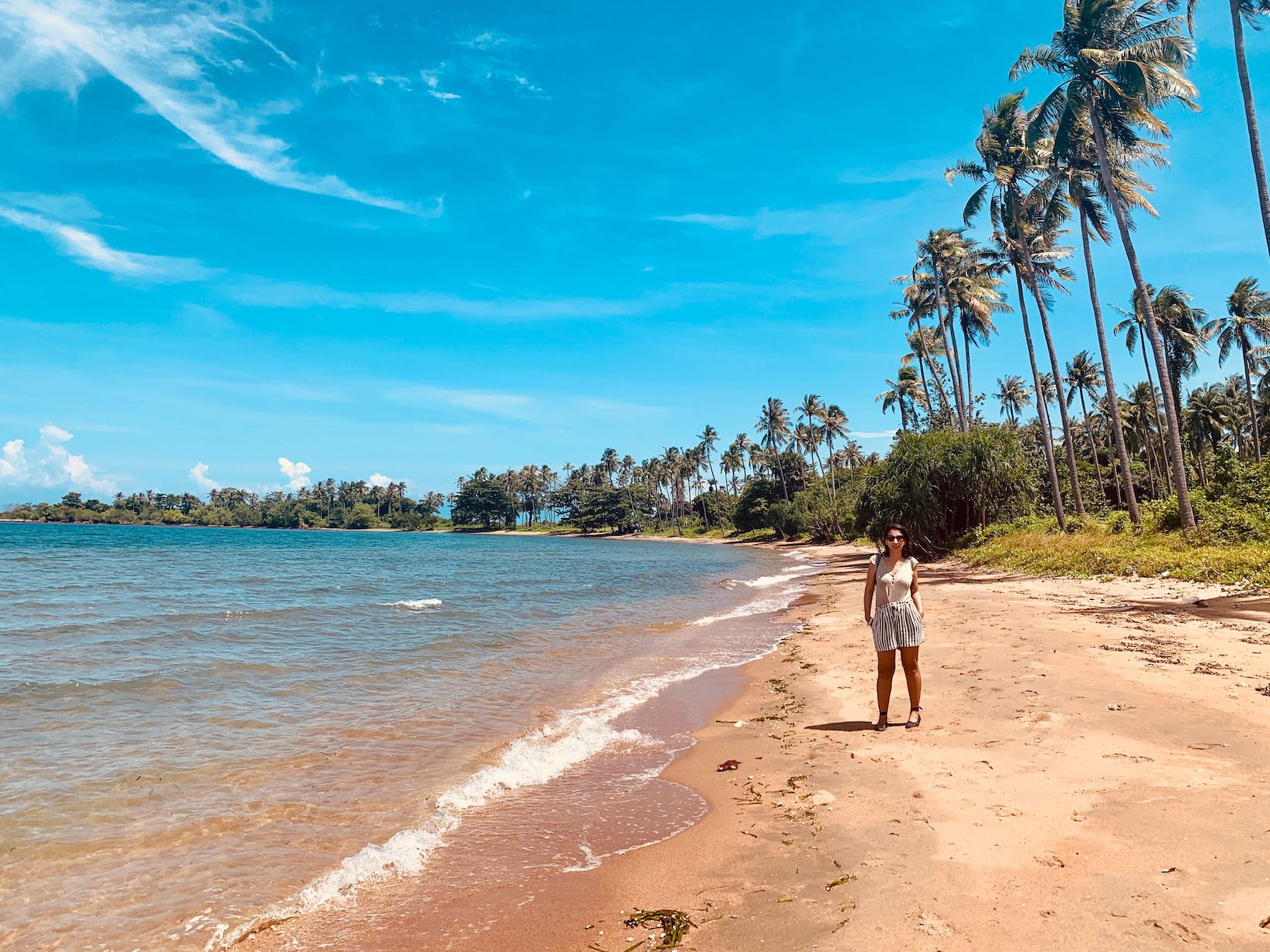 Unfortunately, there was absolutely nothing in the form of shade, and we felt ourselves burning fast. 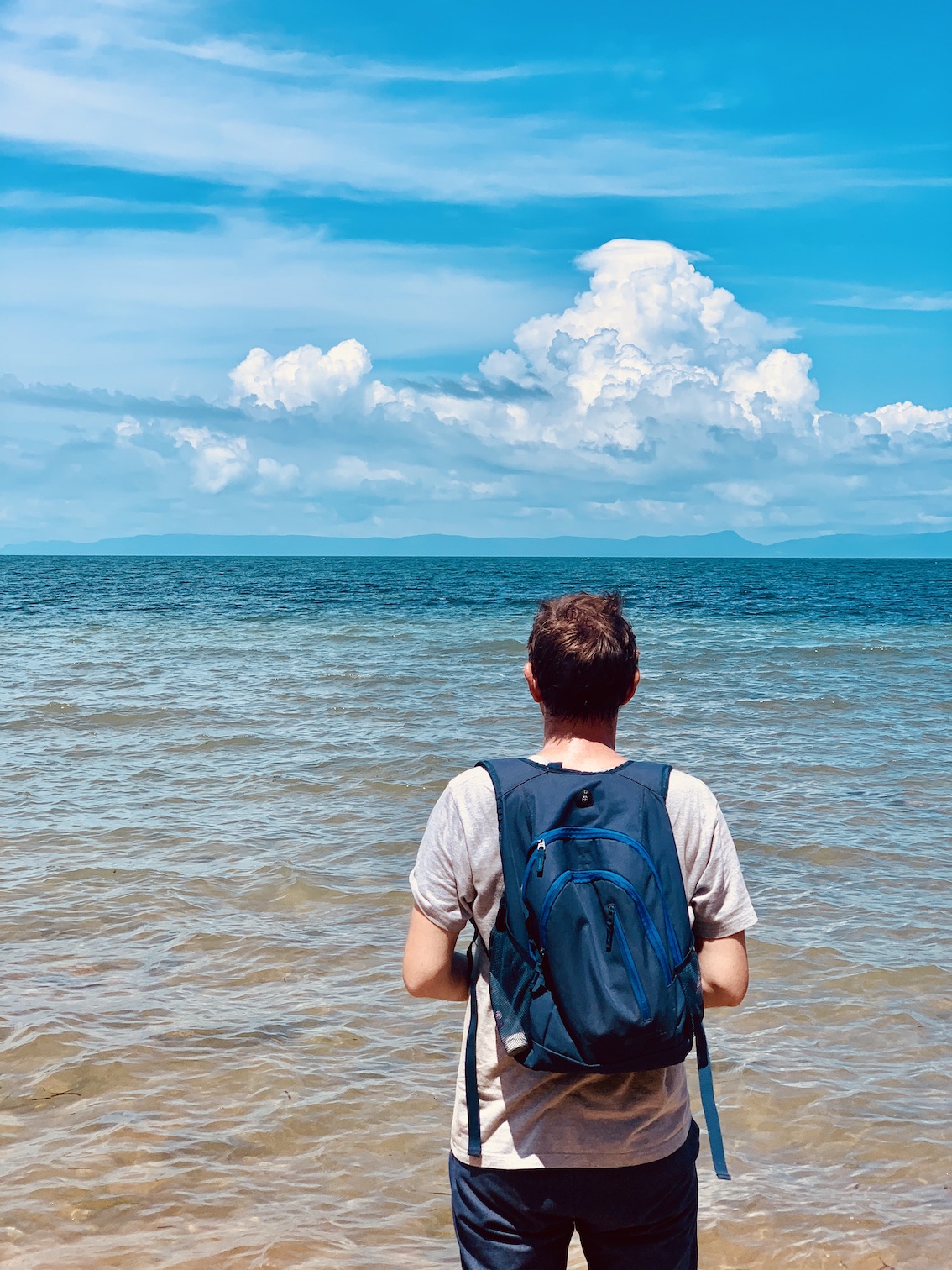 The Gulf of Thailand.

Knowing we wouldn’t be able to stay long, I decided to make the most of our brief visit and jump into the sea for a refreshing swim. The water was cool and clear, a wonderful feeling to have this little patch of Cambodia all to myself. 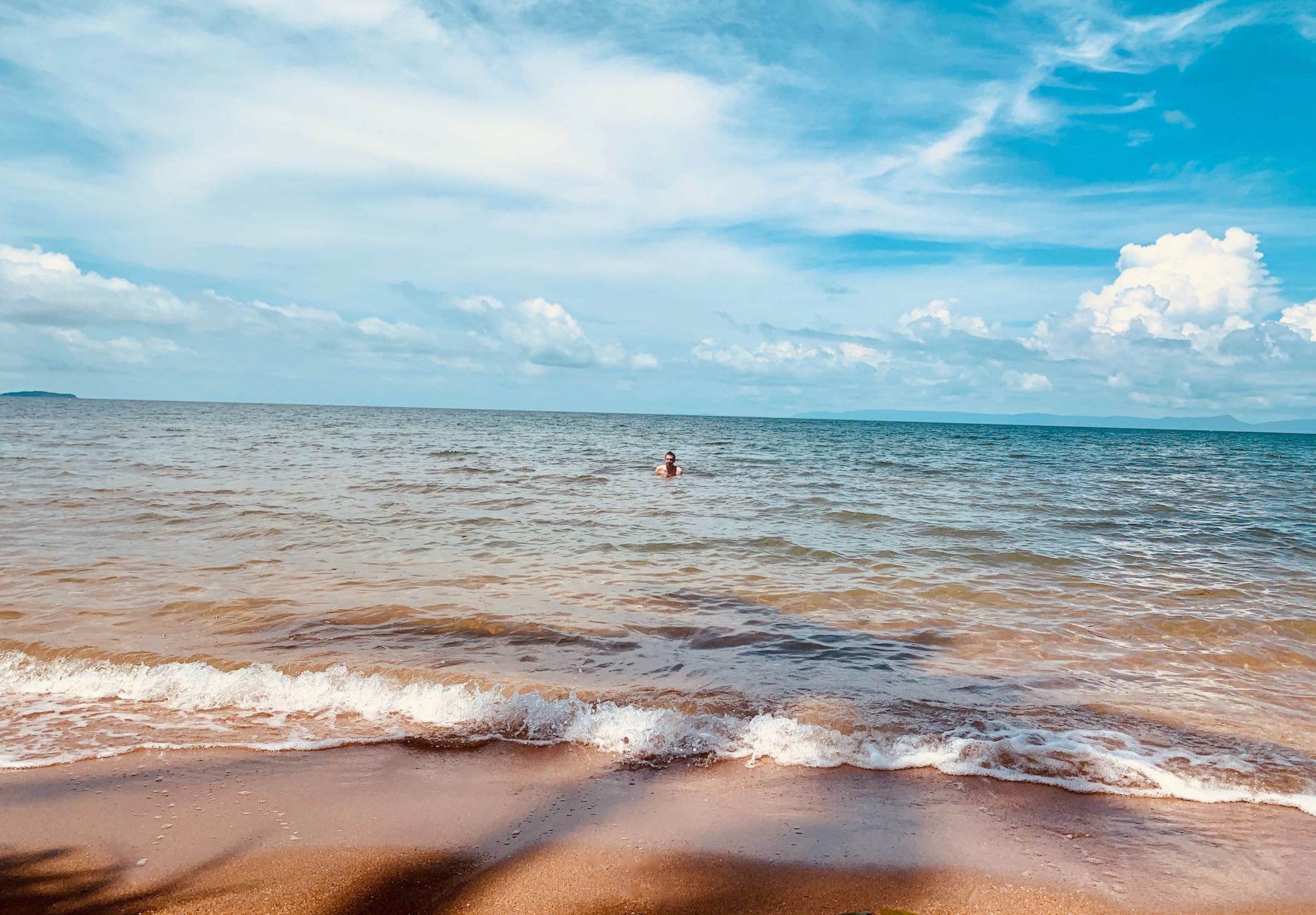 After drying off, we began heading back the way we came. This was when we discovered the single wooden home nestled between the trees. I’d heard that local fishermen live right off the island’s smaller beaches and I guessed this was one of them.

The father or grandfather (I really couldn’t tell) gave us a wave, while the little girl seemed to glare at us with a look that said: “MY beach!” A couple of chickens and a black dog roamed around their home, a tiny wooden hut with fishing gear peppered around the yard. 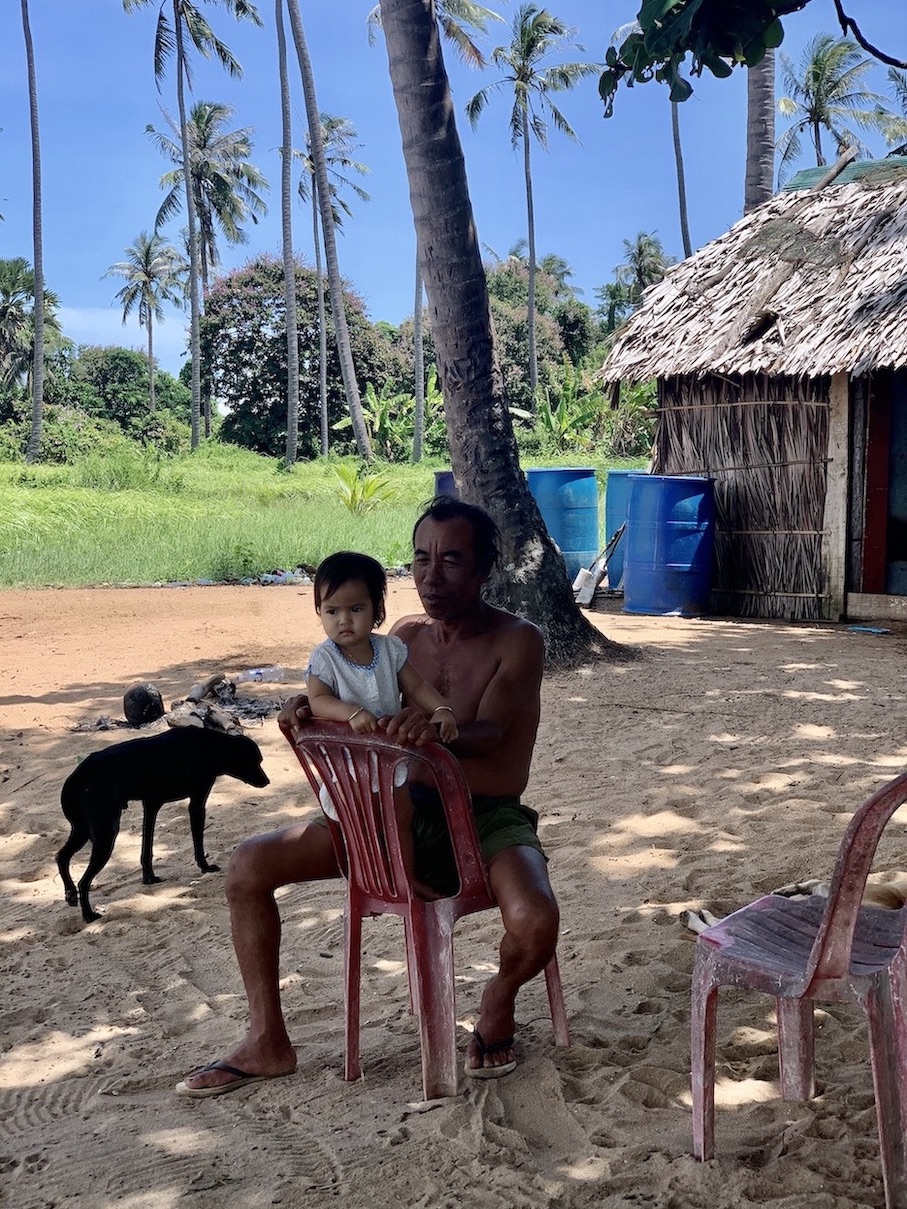 The walk back to the main beach proved every bit as challenging. But now it was time to claim what we had come for… three to four hours of lazing around. 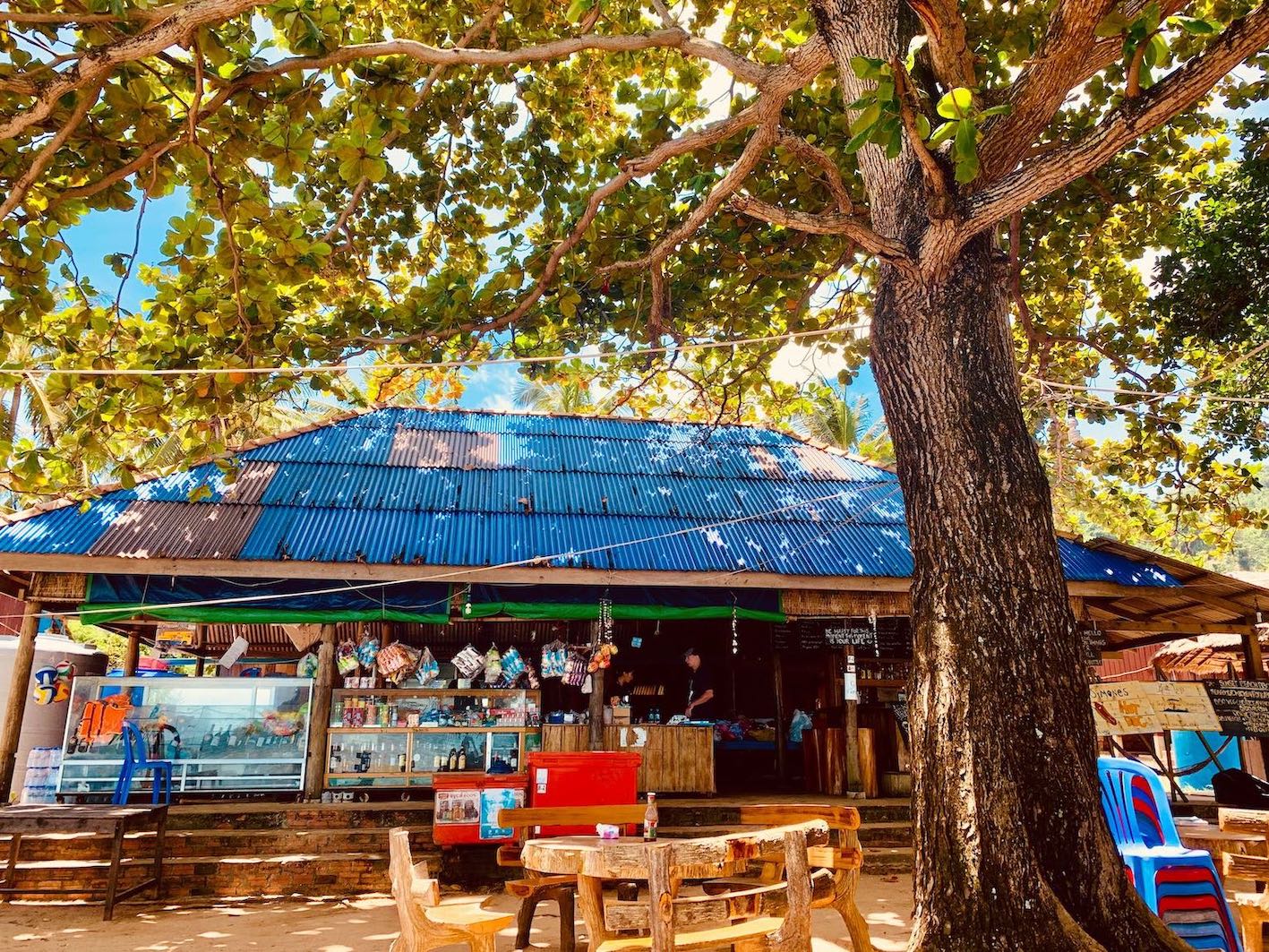 First, we opted to grab some lunch at Simone’s, one of the island’s largest restaurants and bars. Somehow, we found ourselves ordering with low expectations and boy oh boy were our predictions justified. 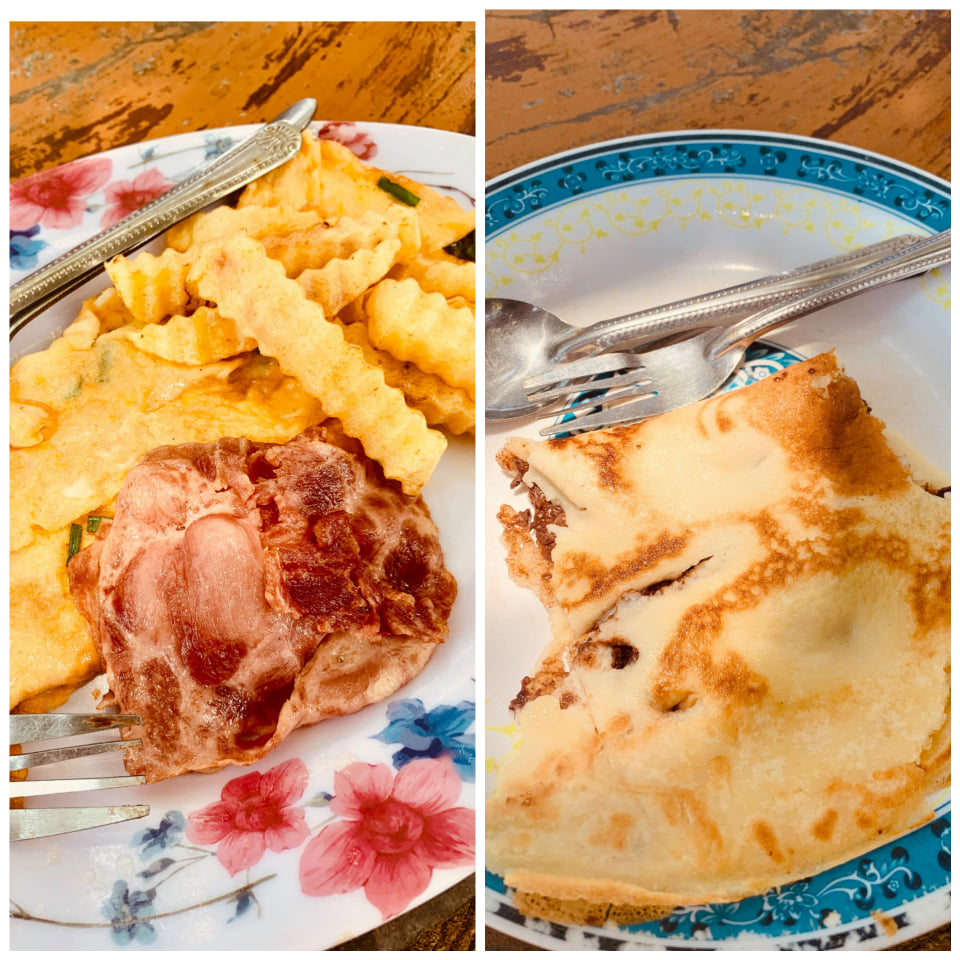 Nevertheless, it got the job done and we happily settled down on some sun beds at the nearby Nghan Soka Bungalows and Restaurant. Not the most comfortable set up on hard wood and no padding. But then nobody seemed interested in charging us a rental fee, so we just accepted it for what it was. 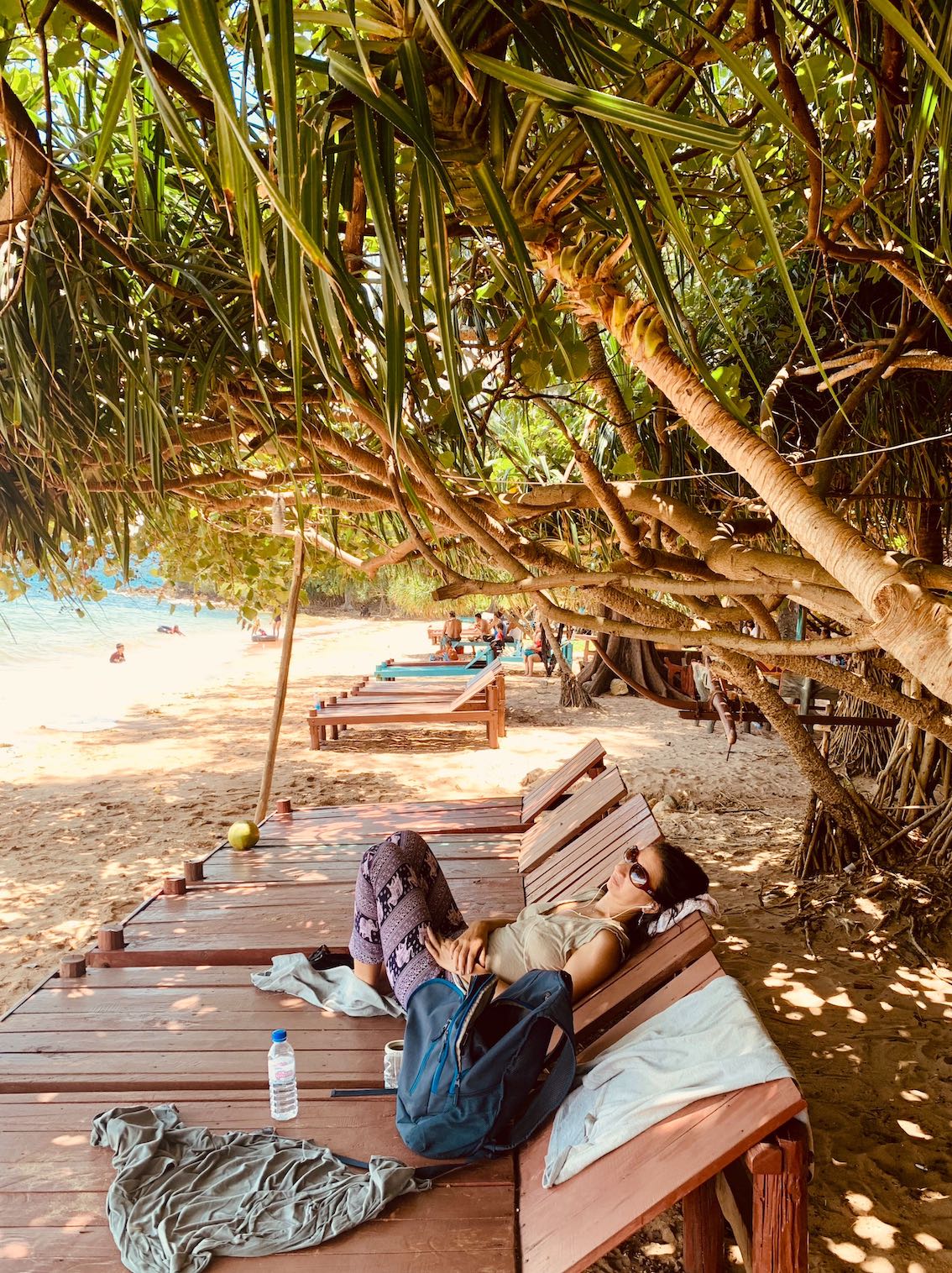 Our remaining time on Koh Tonsay was spent napping and listening to podcasts, with the occasional swim in between. Definitely a much needed change of pace from our usual program running around Kep. 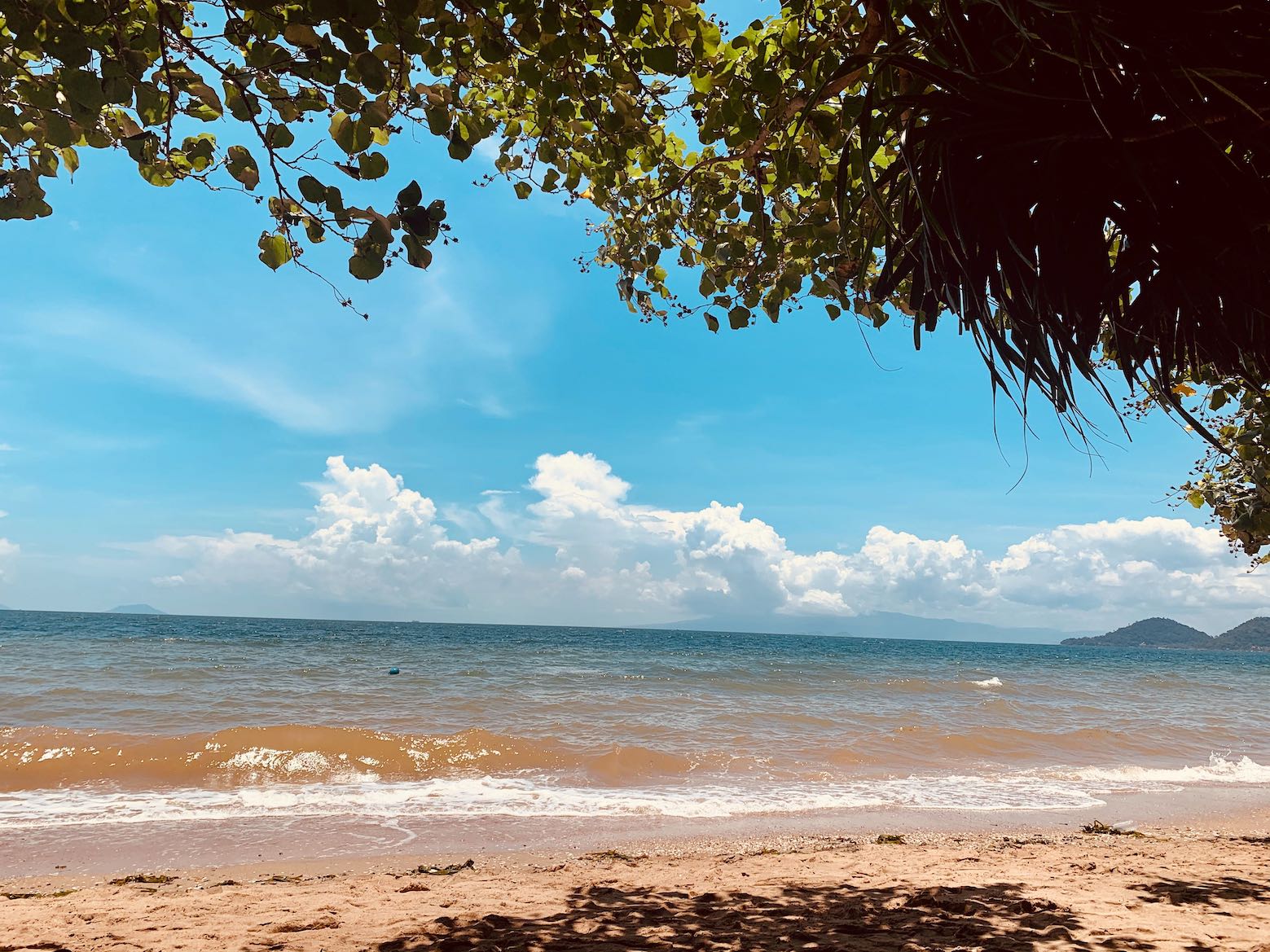