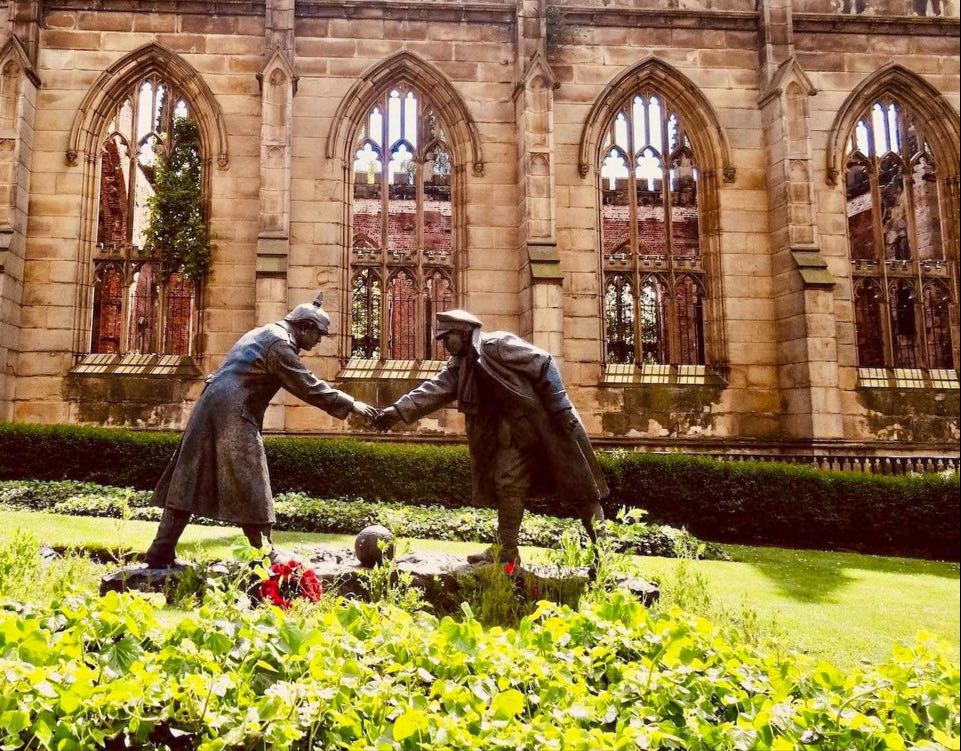 May 2019. Head onto my search bar here at Leighton Travels, type in church, and you’ll get a whole bunch of articles zipping up from across 30+ countries. And yet I’m still confident that until now I haven’t blogged about anything quite like Liverpool’s amazing St Luke’s Church.

Better known to visitors as The Bombed Out Church, it was built between 1811 and 1832. Its nickname is due to the fact that the Germans dropped an incendiary bomb on it during the infamous Liverpool Blitz in 1941. Consequently, the building was reduced to a roofless shell, which is pretty much what remains to this day. 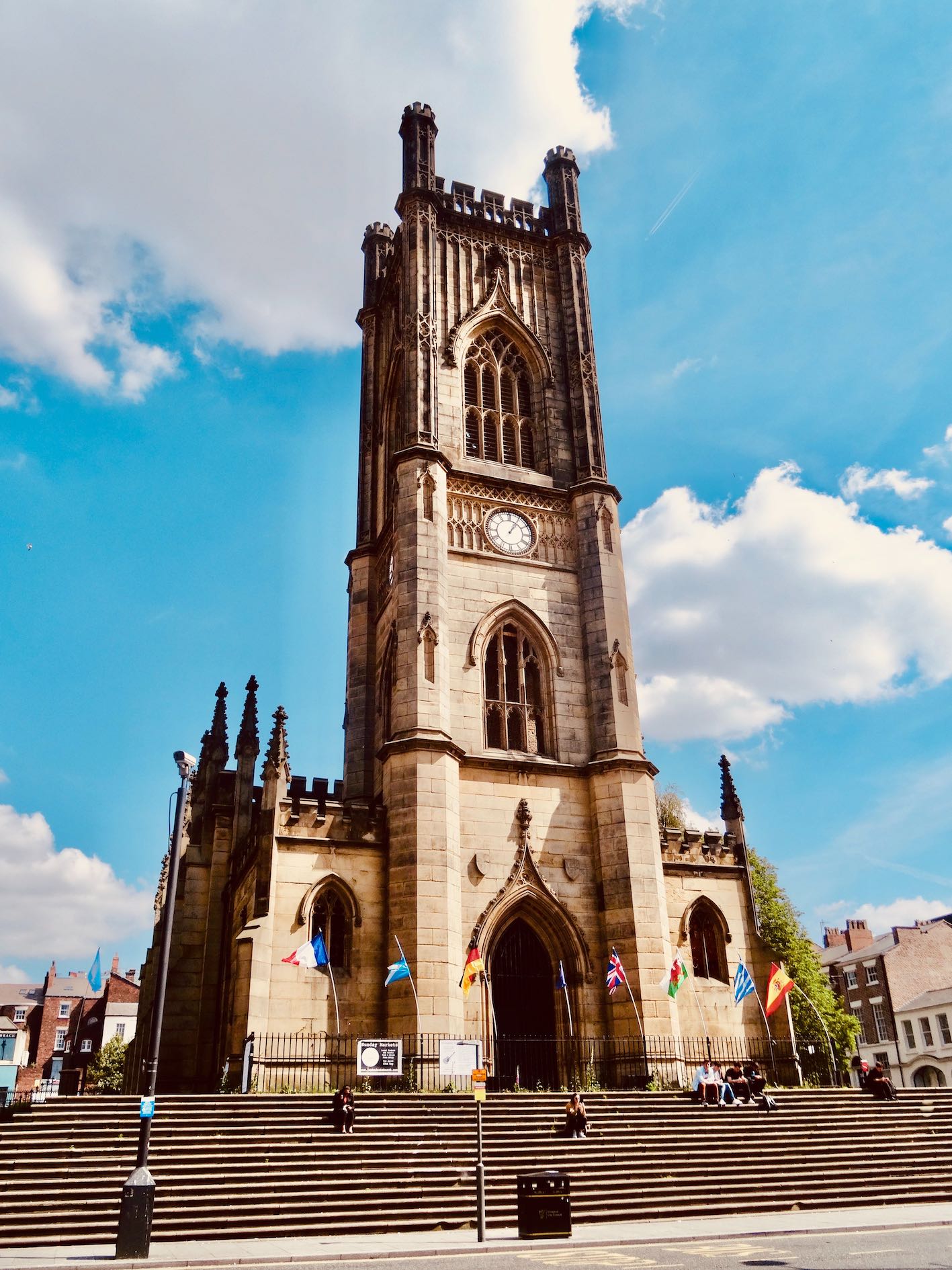 Located on the corner of Leece Street and Berry Street, one can access St Luke’s Bombed Out Church via its lovely garden. As I entered, I took a moment to admire the touching All Together Now sculpture by Andrew Edwards. The same artist, in fact, who made the Beatles Statue at Pier Head on Liverpool’s historic waterfront. 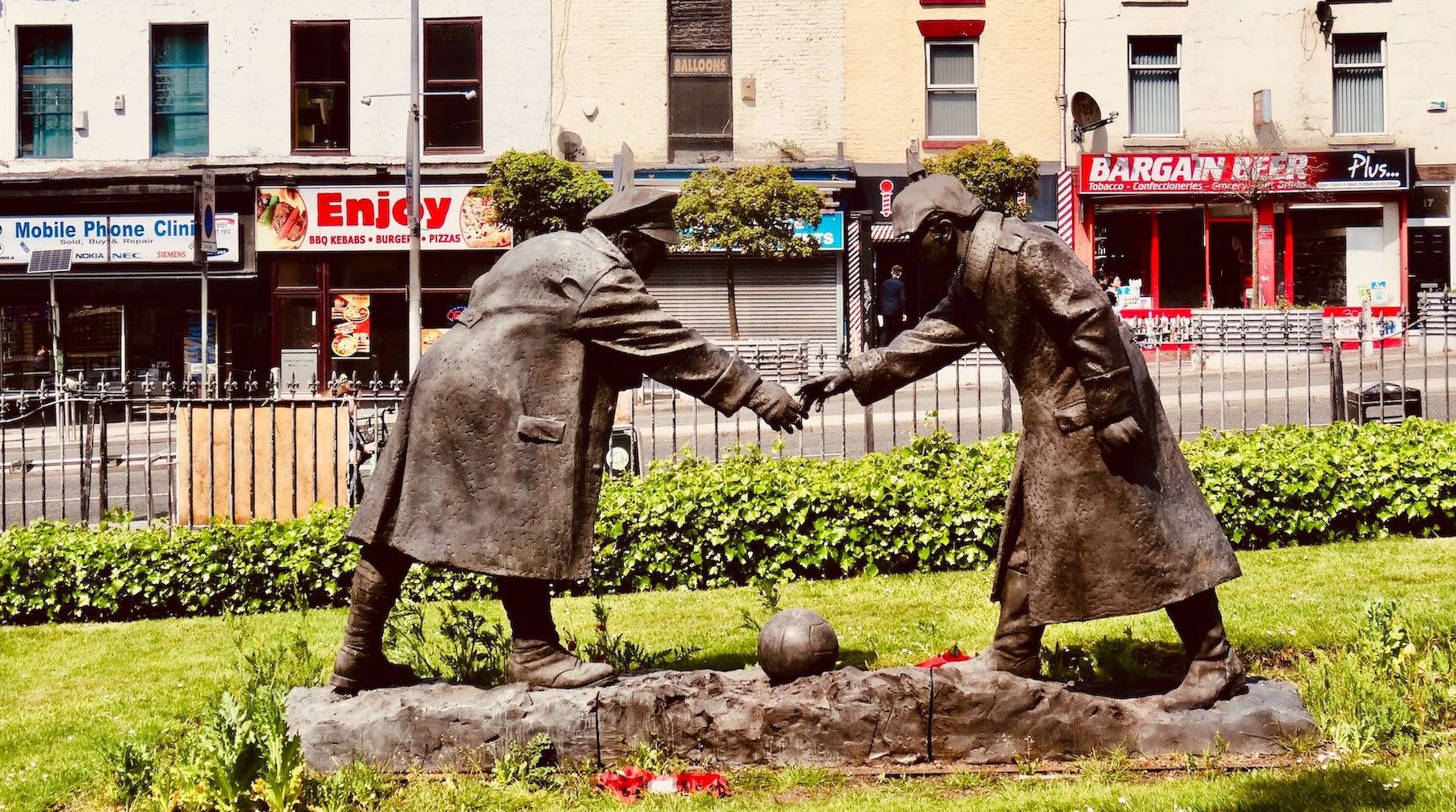 Added to the church grounds in late 2015, the sculpture commemorates the amazing 1914 Christmas Day Truce between British and German soldiers during the First World War. The fibreglass sculpture shows two soldiers about to shake hands. A football set between them on the ground as the English and Germans prepare to play. 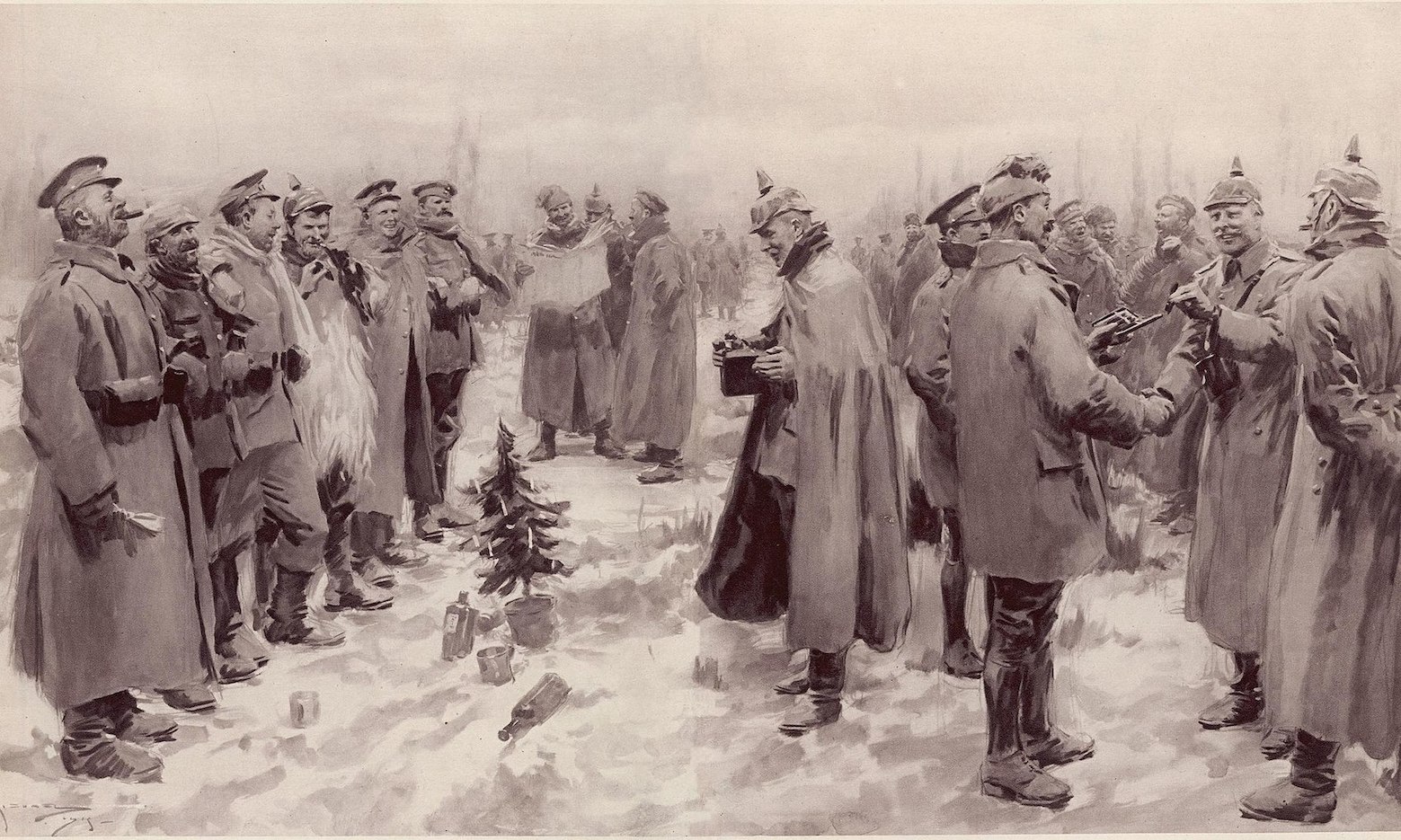 An illustration of the 1914 Christmas Truce by A.C. Michael.

According to Edwards, he intended his creation to “capture that moment of humanity amidst all the horror and carnage”. 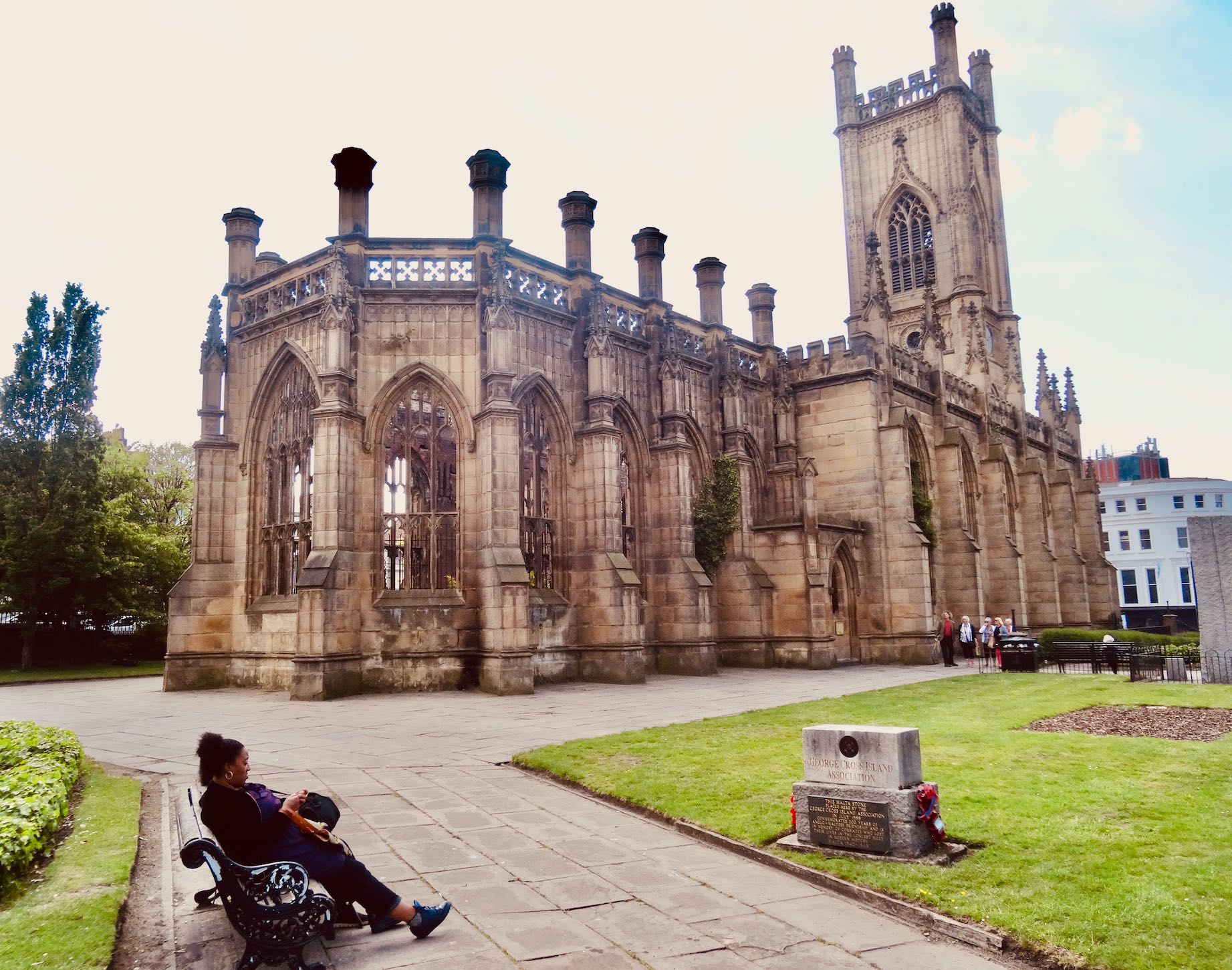 The church gardens are understated but lovely and a highly popular spot for locals and tourists to come and hang out. Following decades of neglect, they reopened in their current form in 2015 after a two year project. 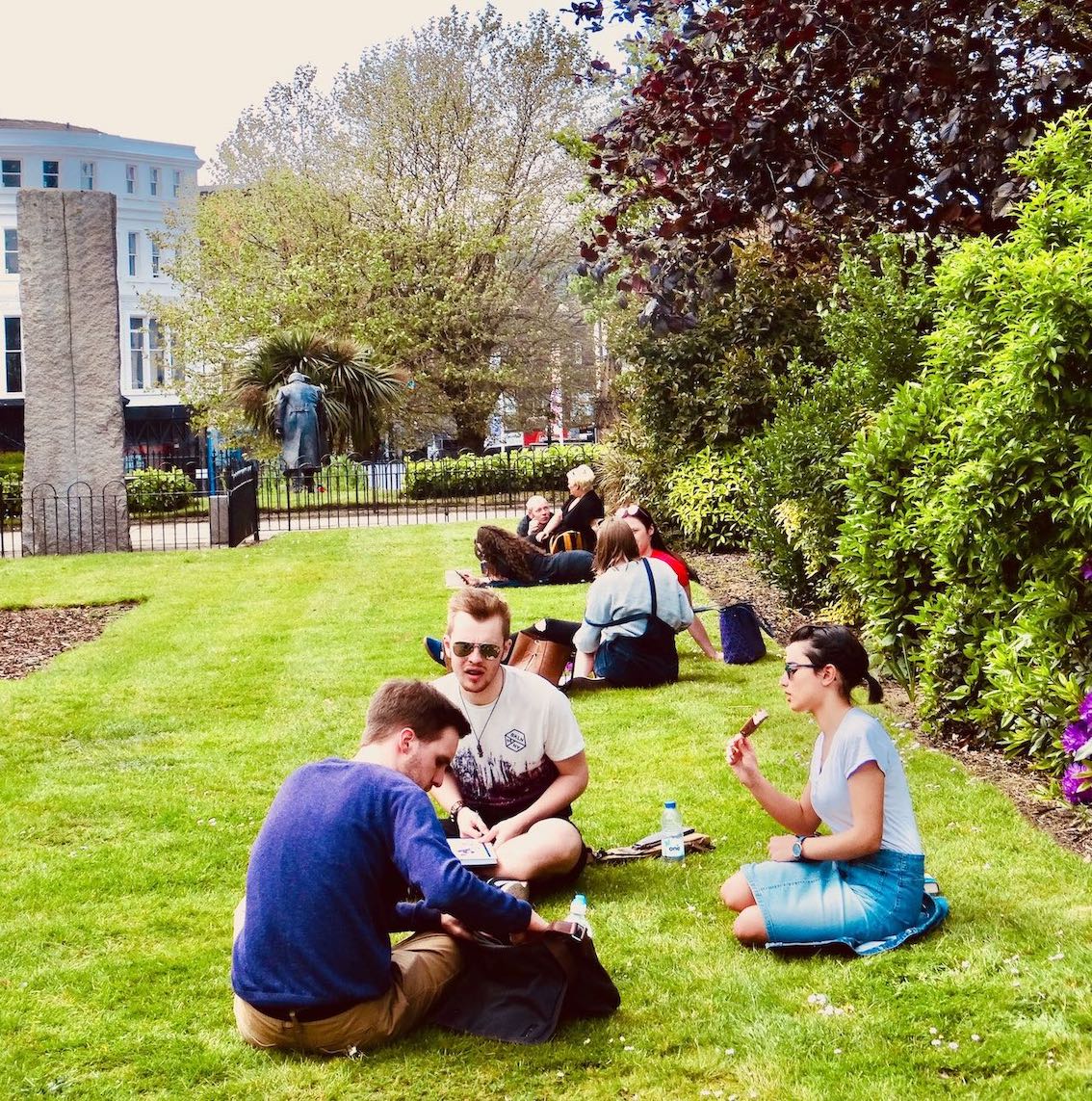 The garden at Church of St Luke.

That afternoon, as I took a load off on one of the benches, it was a wonderfully relaxed scene. Office workers from across the road had come to have their lunch. Moreover, students picnicked on the grass and the occasional tourist like me wandered in, camera in hand. 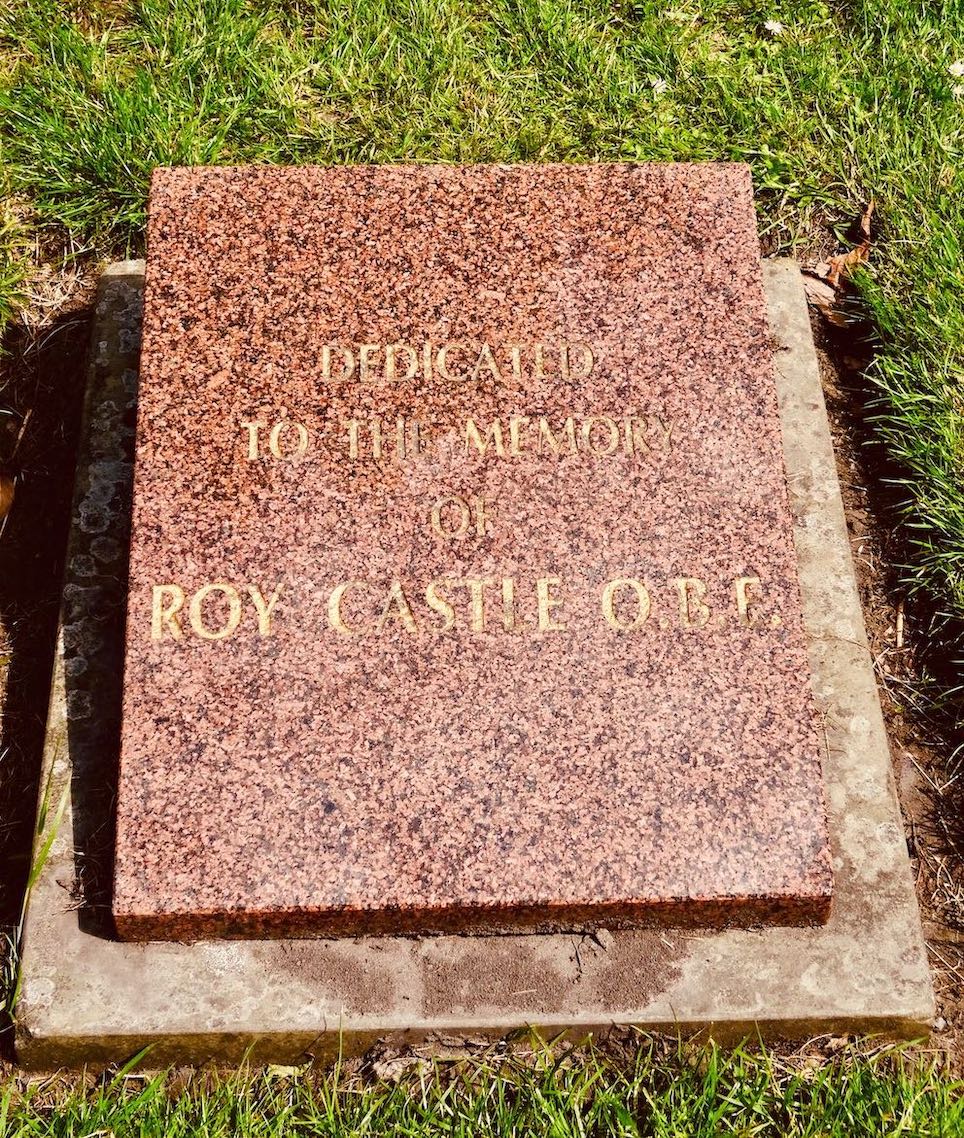 Exploring the garden, I soon discovered this memorial stone to the English TV presenter and entertainer Roy Castle. I remember watching Roy on TV as a kid when he presented the popular BBC series Record Breakers, a show about amazing world records. 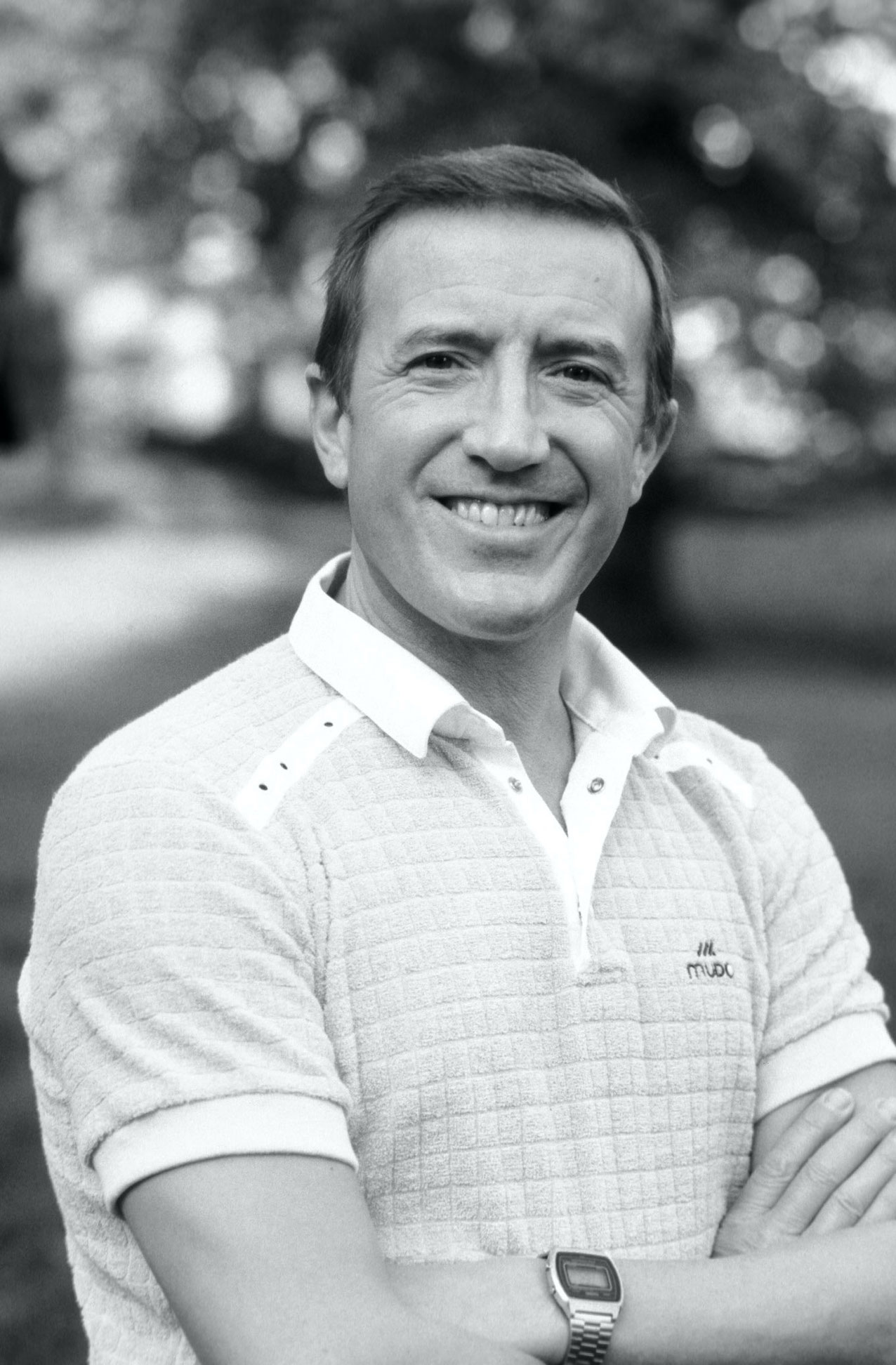 Roy presented the program for eleven years, breaking nine world records himself in the process! He died in September 1994 of lung cancer aged 62. Although from Yorkshire, Castle was a lifelong fan of Liverpool Football Club. Thus it came to pass that a memorial to the man and his achievements stands in the city he loved so much. 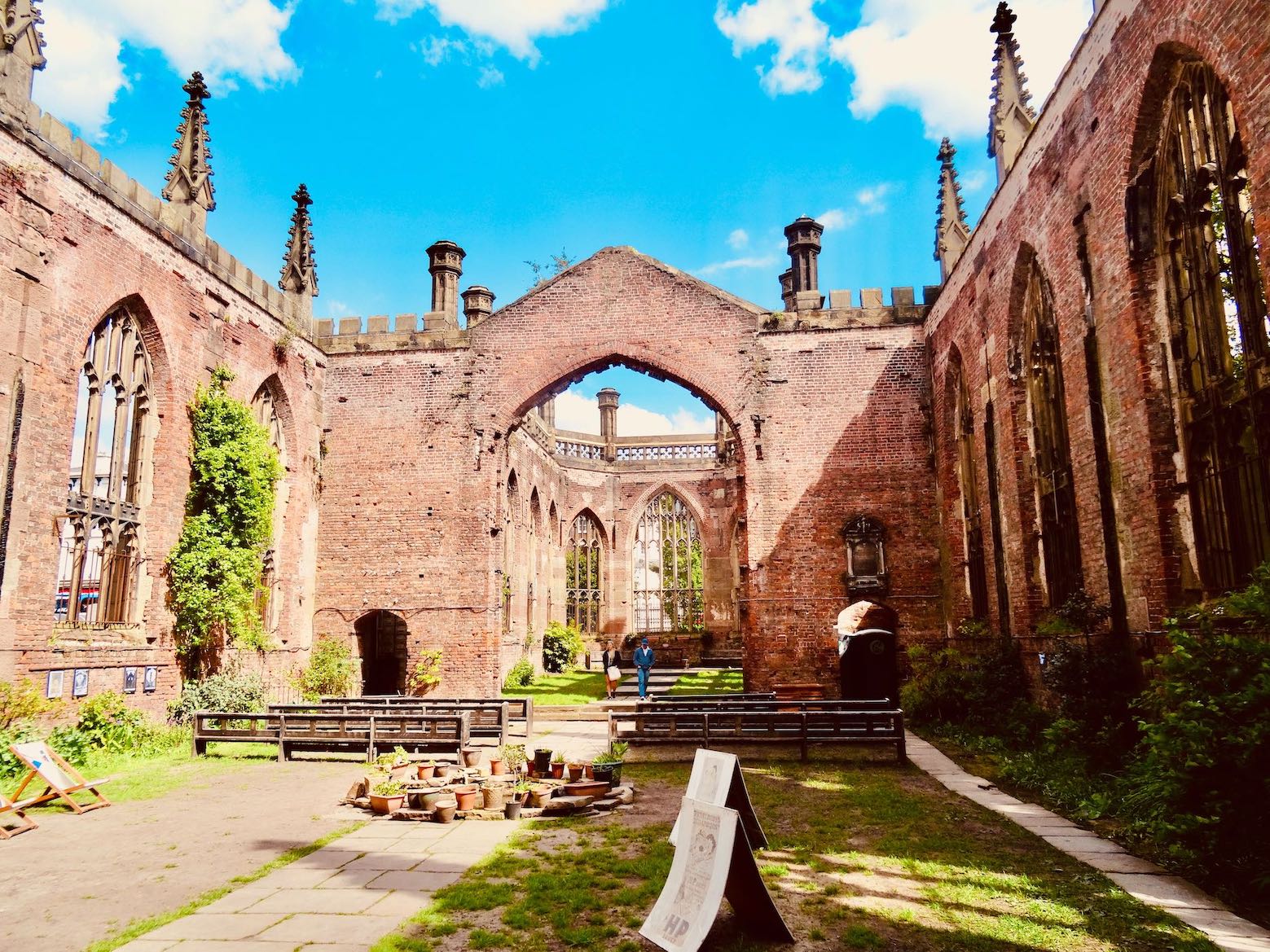 The Liverpool Blitz was a heavy and sustained period of bombing upon the city by The German Luftwaffe. The Nazis targeted Liverpool because it was home to the largest port on England’s west coast.

The attacks destroyed hundreds of Liverpool’s most historic buildings, including St Luke’s. After the war, there were numerous plans to knock it down. However, thanks to local protests that never happened and the ruin survived. 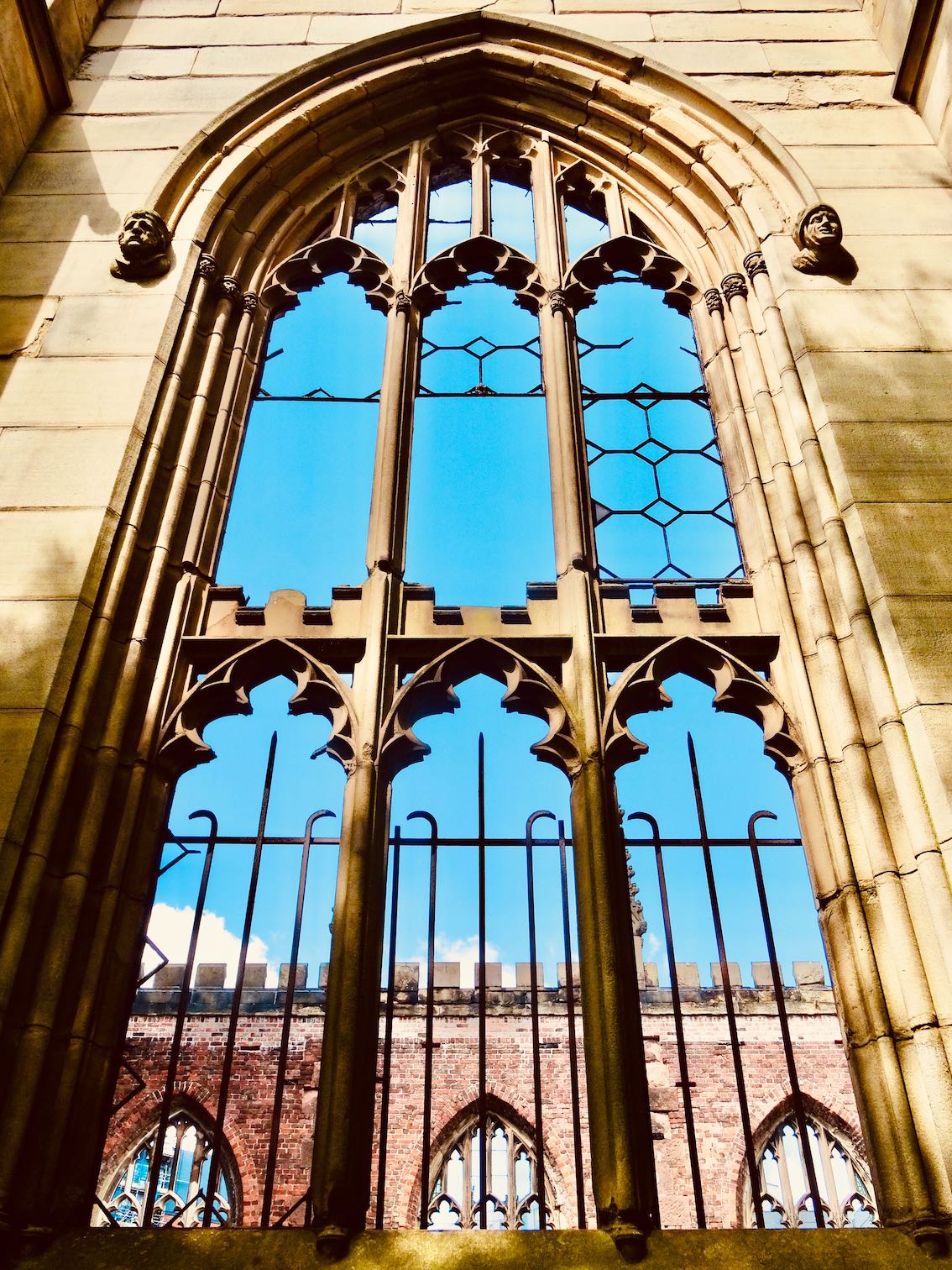 In 1975 it became listed as a Grade II building. But it wasn’t until 2007 that the church became a managed public ruin thanks to a local arts company, Urban Strawberry Lunch. Under the guidance of their founder, Ambrose Reynolds, they opened an onsite visitor centre and drew up plans to transform the place into an events venue. 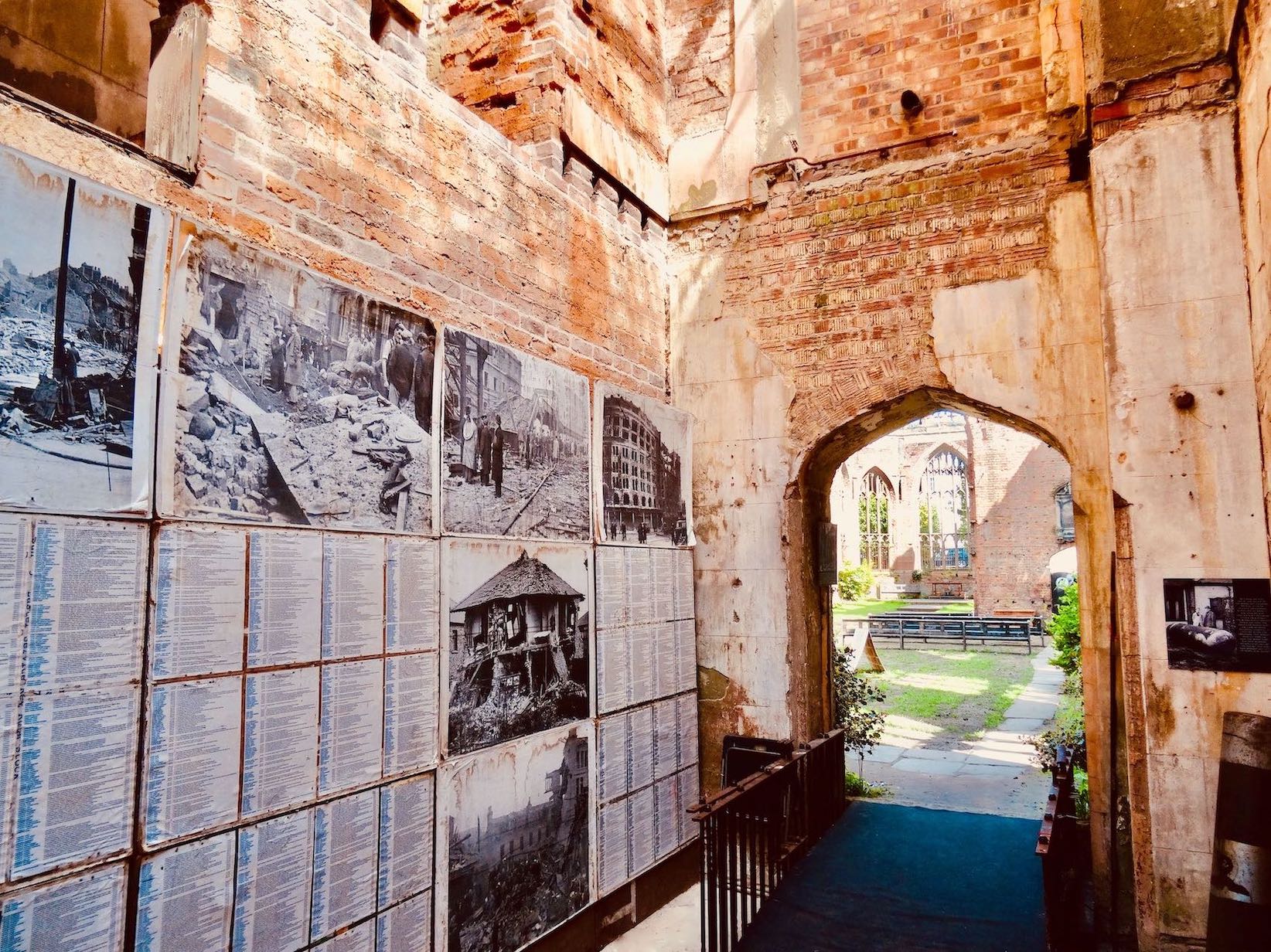 Inside St. Luke’s Bombed Out Church.

What to See & Do, Liverpool. 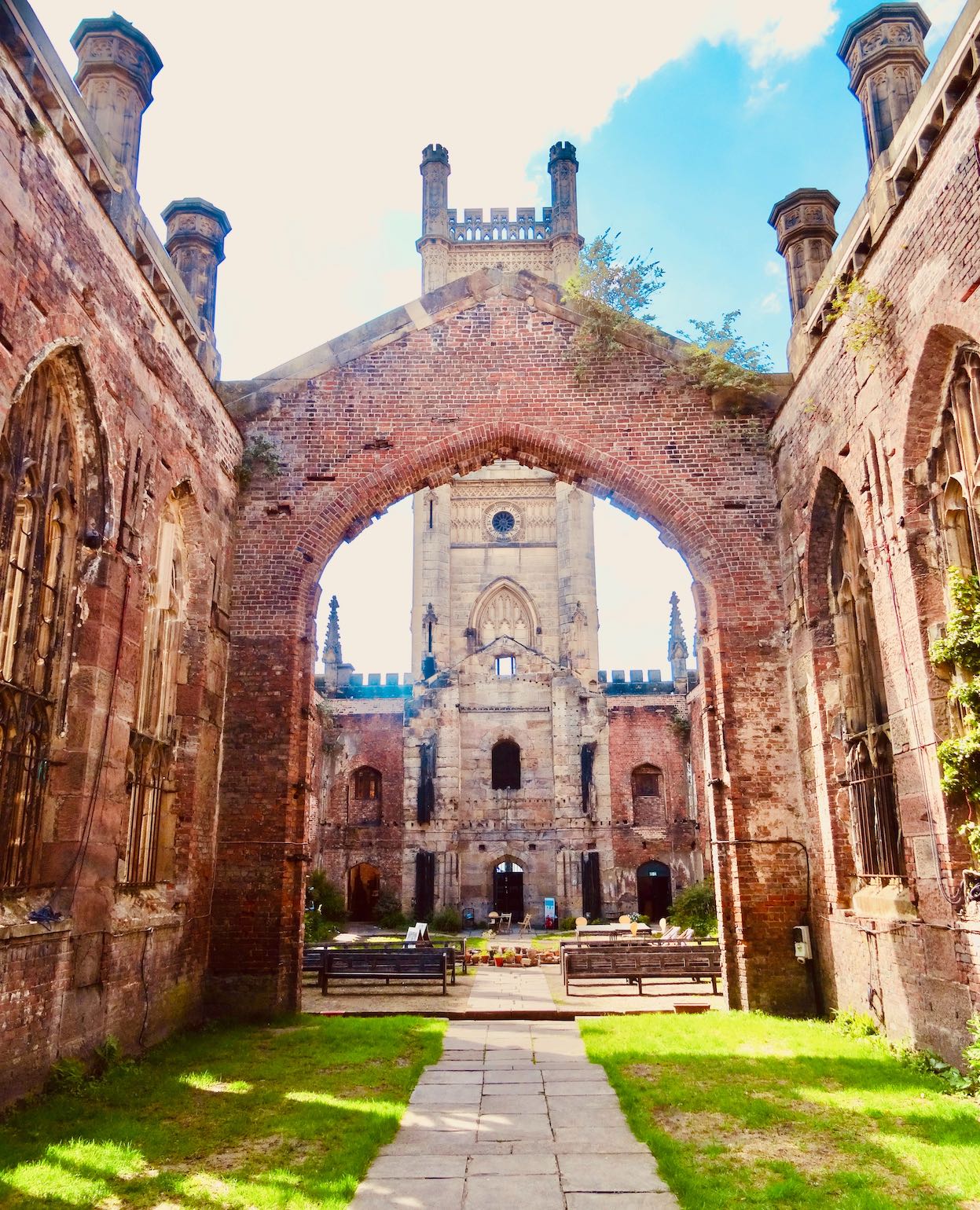 And so St. Luke’s has become a key part of Liverpool cultural life. There have been some fantastic events held here over the years, such as Yoko Ono’s Sky Ladders for Liverpool Exhibition. They also put on movie screenings and have hosted a number of local weddings. 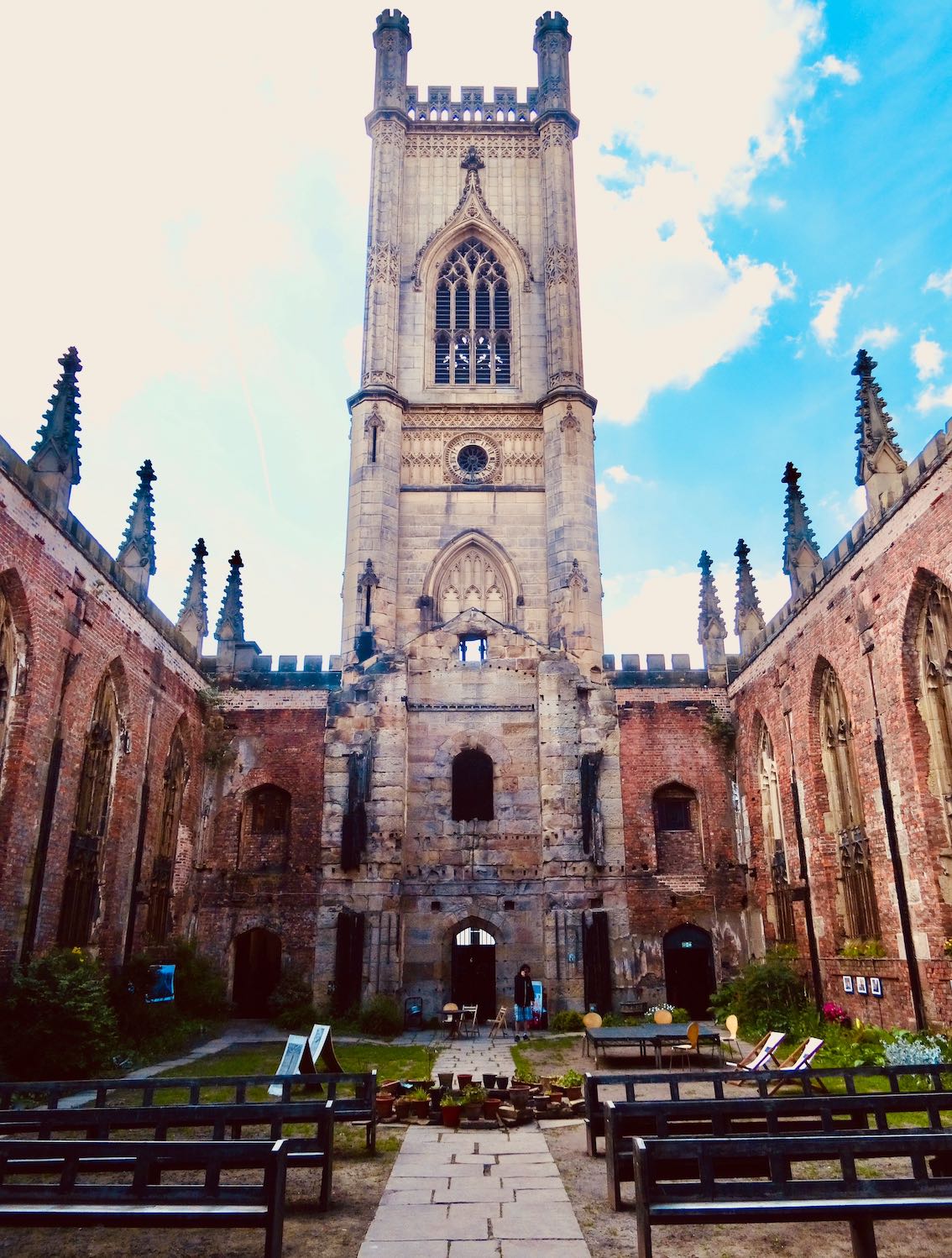 Prior to COVID you could show up here and see yoga classes in action, or perhaps a live performance of a Shakespeare play. Even if there’s nothing happening, as was the case the day I visited, it remains a fantastically atmospheric sight that simply oozes history. 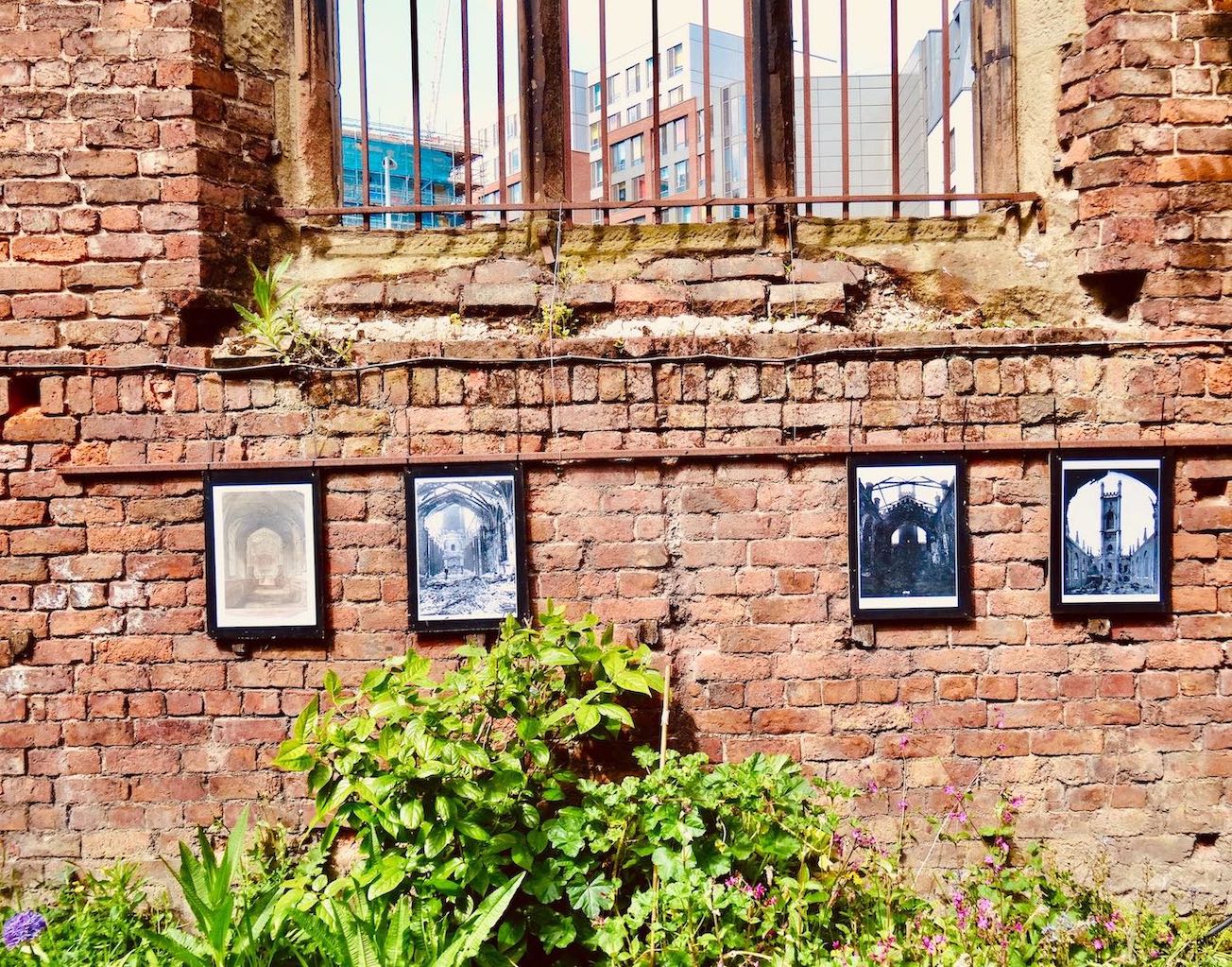 The garden usually opens from 10:00-18:00, while to go inside they ask a very reasonable £1 donation. If you’re planning to come here, do check ahead of time, as they occasionally close for special events and maintenance days. For all the info, take a look at their website. 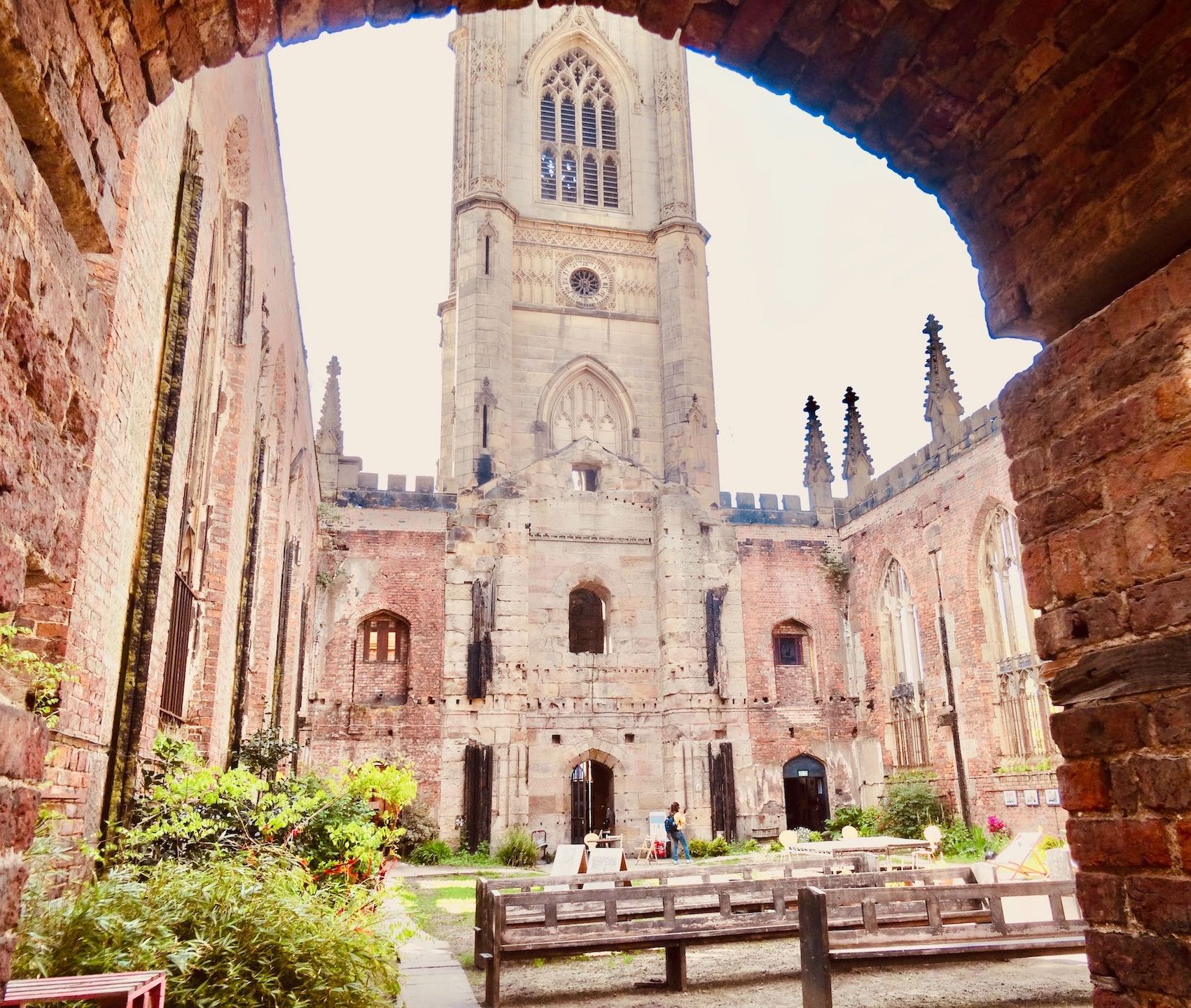