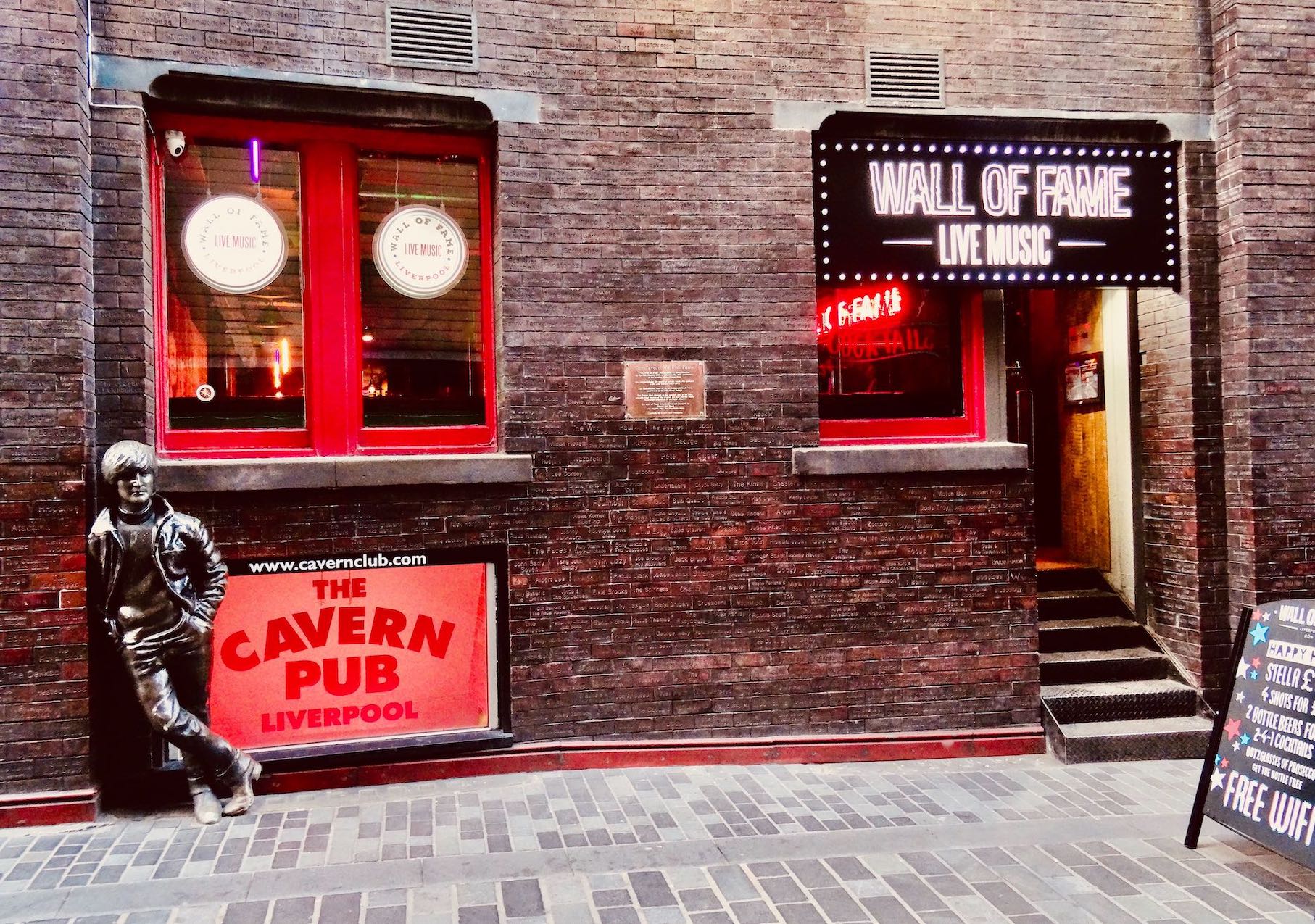 May 2019. It was early evening when Steppers and I mooched onto Mathew street, the beating heart of Liverpool’s world famous Cavern Quarter. We had of course come to see The Cavern Club, the legendary music venue where The Beatles cut their teeth in the early 1960s.

However, while The Cavern Club is undoubtedly Mathew Street’s main draw, the first thing you’ll see as you enter from North John Street is its sister venue, The Cavern Pub. Just look out for the statue of John Lennon casually leaning against the wall. 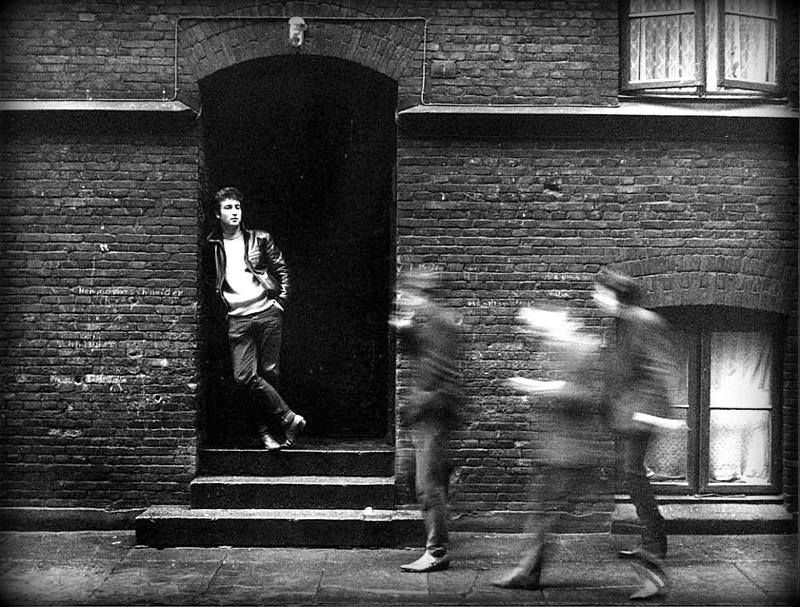 The statue was modelled from an old photo taken by the German photographer Jurgen Vollmer during The Beatles’ Hamburg days. The three blurred figures in the foreground are Paul McCartney, George Harrison and Stuart Sutcliffe. The shot eventually served as the front cover for Lennon’s troubled 1975 solo album Rock ‘n’ Roll. 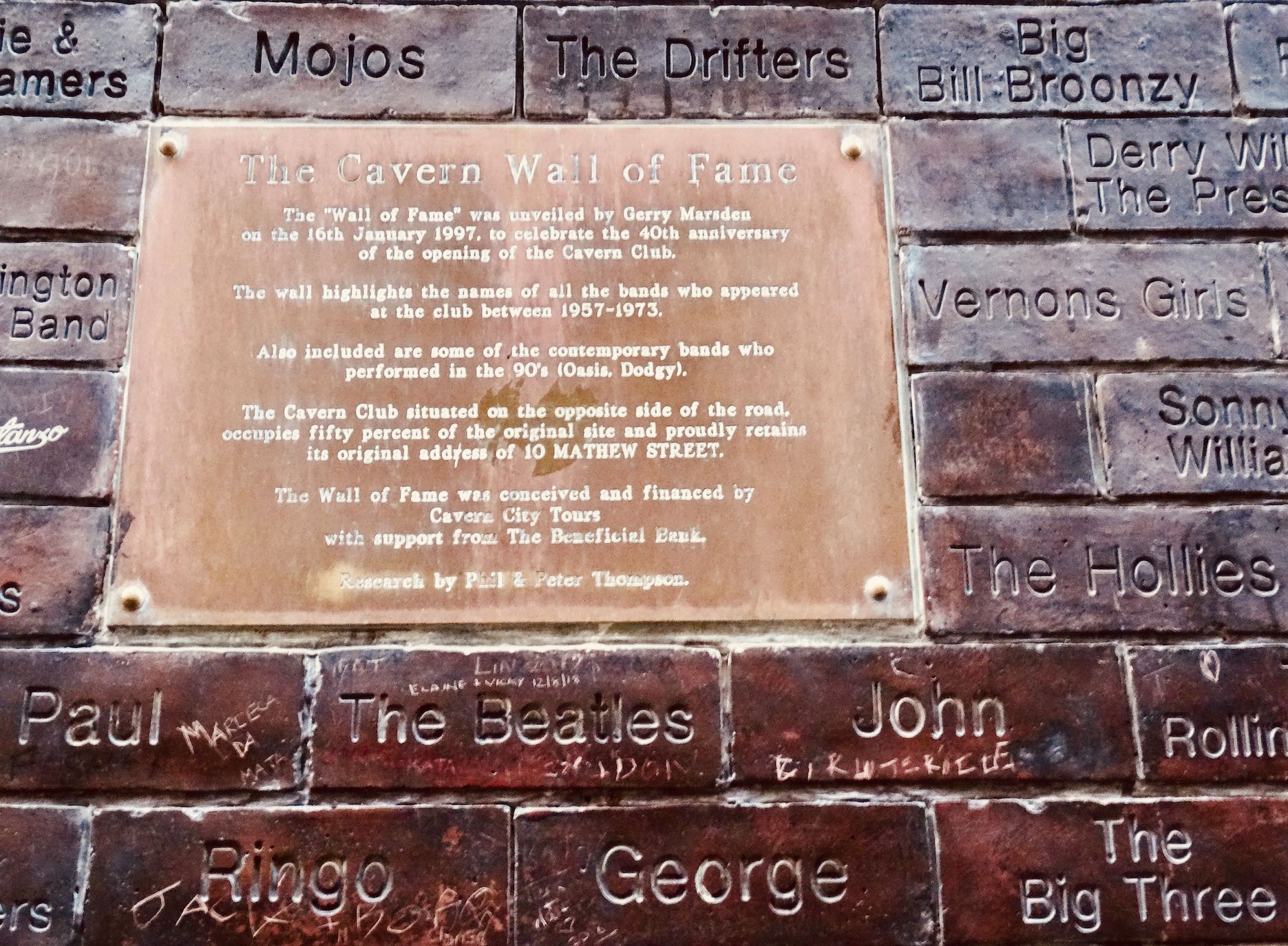 Before ducking inside, we took a moment to appreciate The Wall of Fame, unveiled by Gerry and the Pacemakers singer Gerry Marsden in 1997. Covering the exterior of The Cavern Pub, it stands as a tribute to the artists who’ve appeared at The Cavern Club across the road. Which is a little confusing, and one of many reasons so many people get the two venues muddled up. 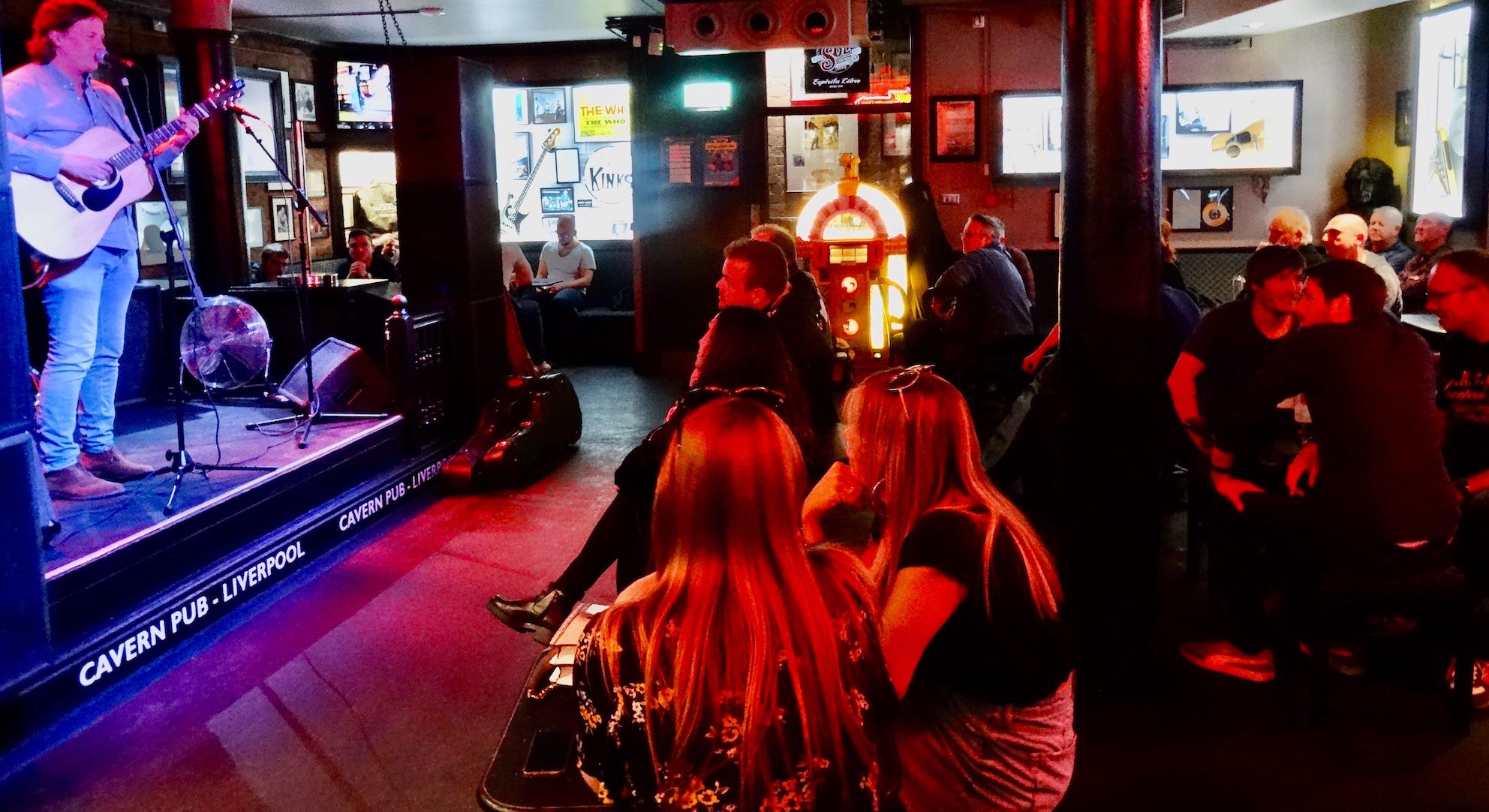 The Cavern Pub is a live music venue focusing on local talent. Whether it be singer-songwriters, tribute acts or bands showcasing original material, this is where the city’s young hopefuls want to play.

My travel buddy Steppers and I paid a visit during the pub’s Monday Night Acoustic Set. The evening was already well underway when we entered and with free entrance there wasn’t a spare seat available. I didn’t catch the name of this first singer, but he was in the middle of performing a moving original composition called Brother Gone, about the passing of an old friend. 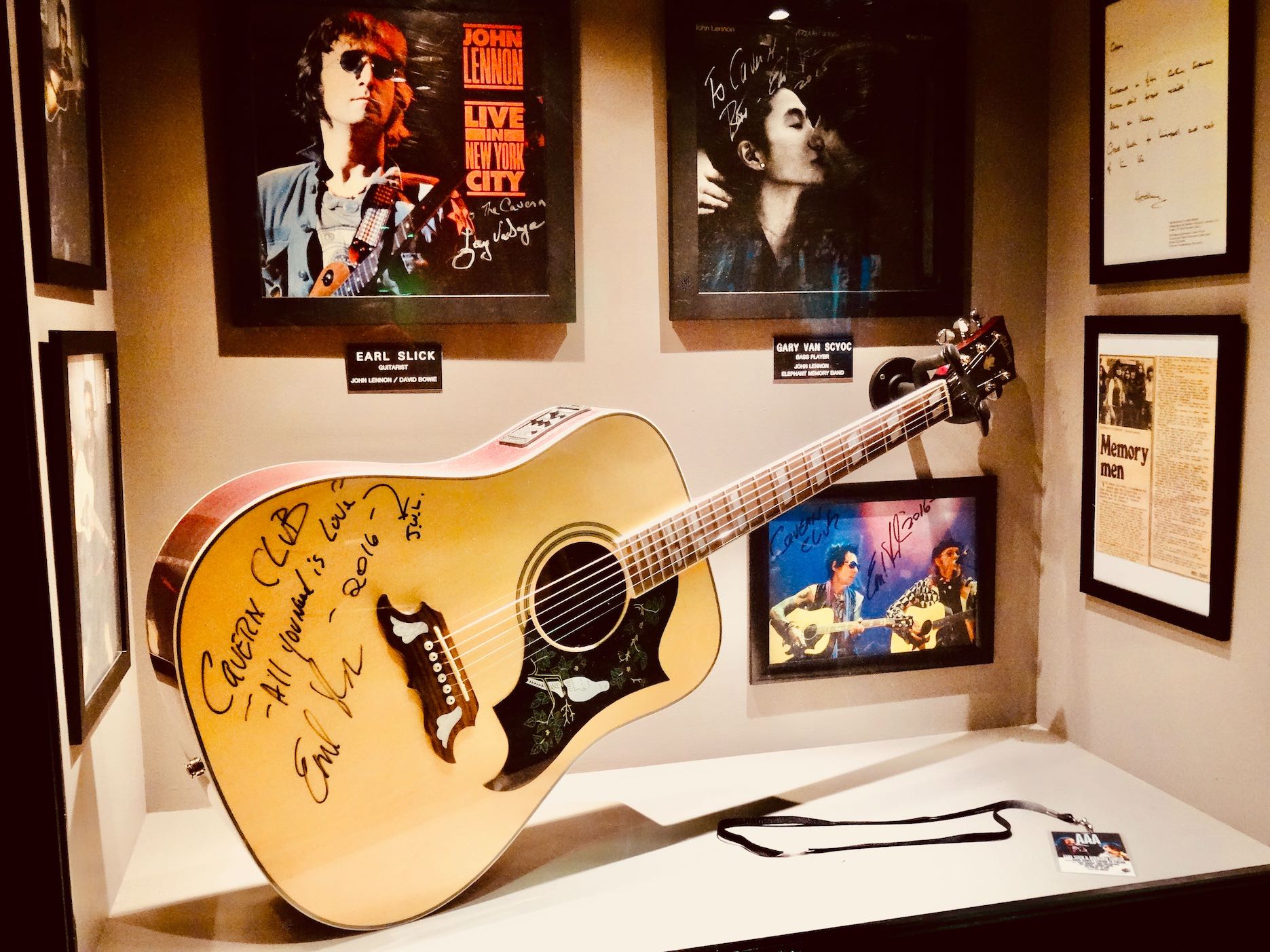 As it turned out, we’d just caught the end of the first set. Hence I took advantage of the break to check out the various glass exhibits of rock memorabilia.

Much like The Cavern Club, there’s some very cool items here, including original guitars, handwritten lyrics and signed albums. The above shot features a signed guitar by Earl Slick. “All you need is love!” exclaims the man who has played with John Lennon, David Bowie and The Cure’s Robert Smith. 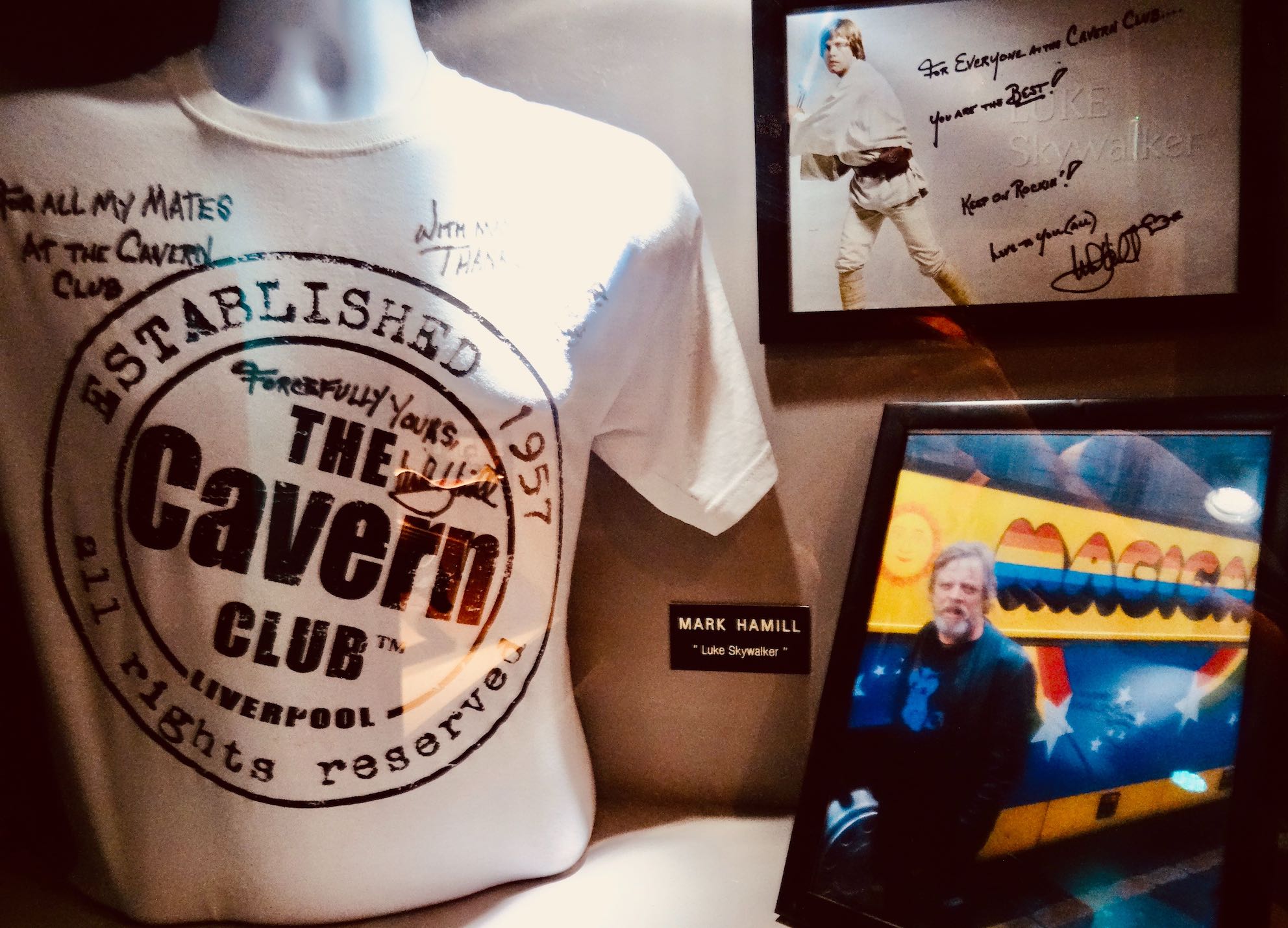 The Cavern Pub’s glass cases are certainly full of surprises. I had no idea, for example, that Star Wars legend Mark Hamill is a big Beatles fan. Nor indeed that he’d come to Liverpool to hang out at the city’s famous music clubs. “To all my mates at The Cavern, you are the best!” Whatever went down, it sounds like Luke Skywalker had a great time. 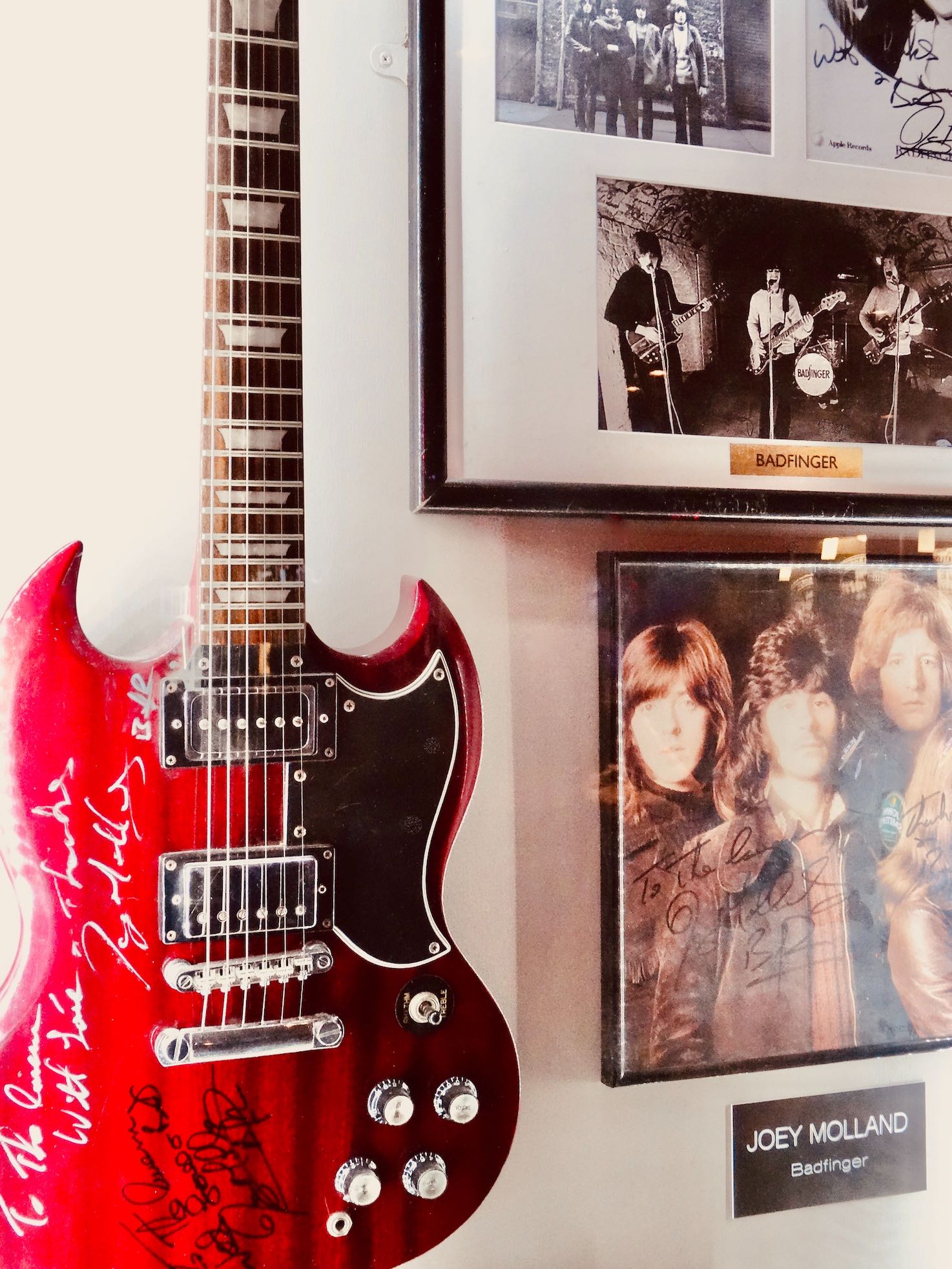 The most curious exhibit I saw that night was this tribute to the forgotten Welsh band Badfinger. Big things were expected of this group after they signed to The Beatles’ Apple label in 1968. 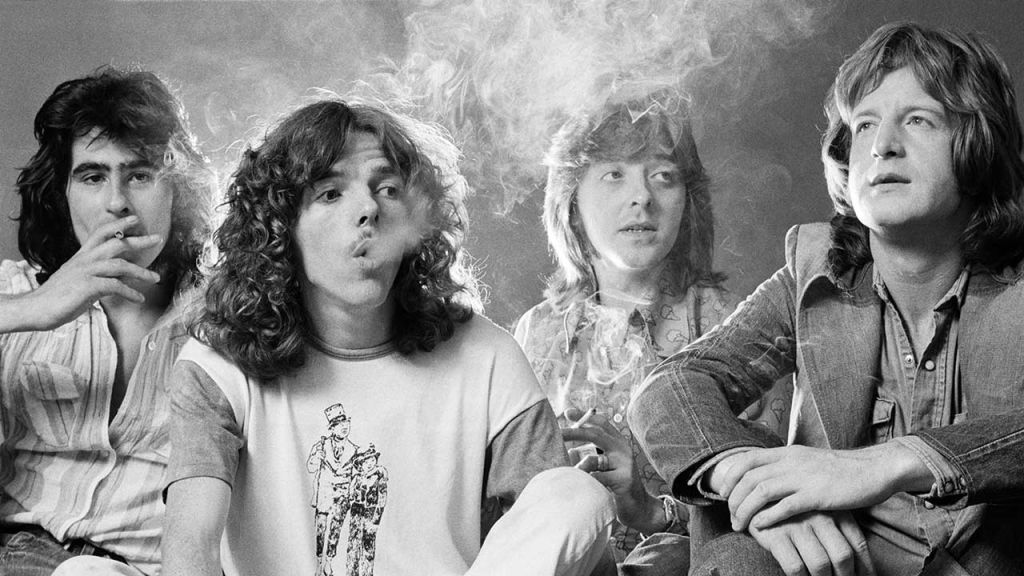 But sometimes the gods just refuse to smile on you. Labelled by some music journalists as “the unluckiest band in rock history”, their tragic story is a tale of internal conflict, managerial betrayal, legal issues and multiple suicides. Nevertheless, their songwriting reputation has endured after Mariah Carey enjoyed huge success with their song Without You. 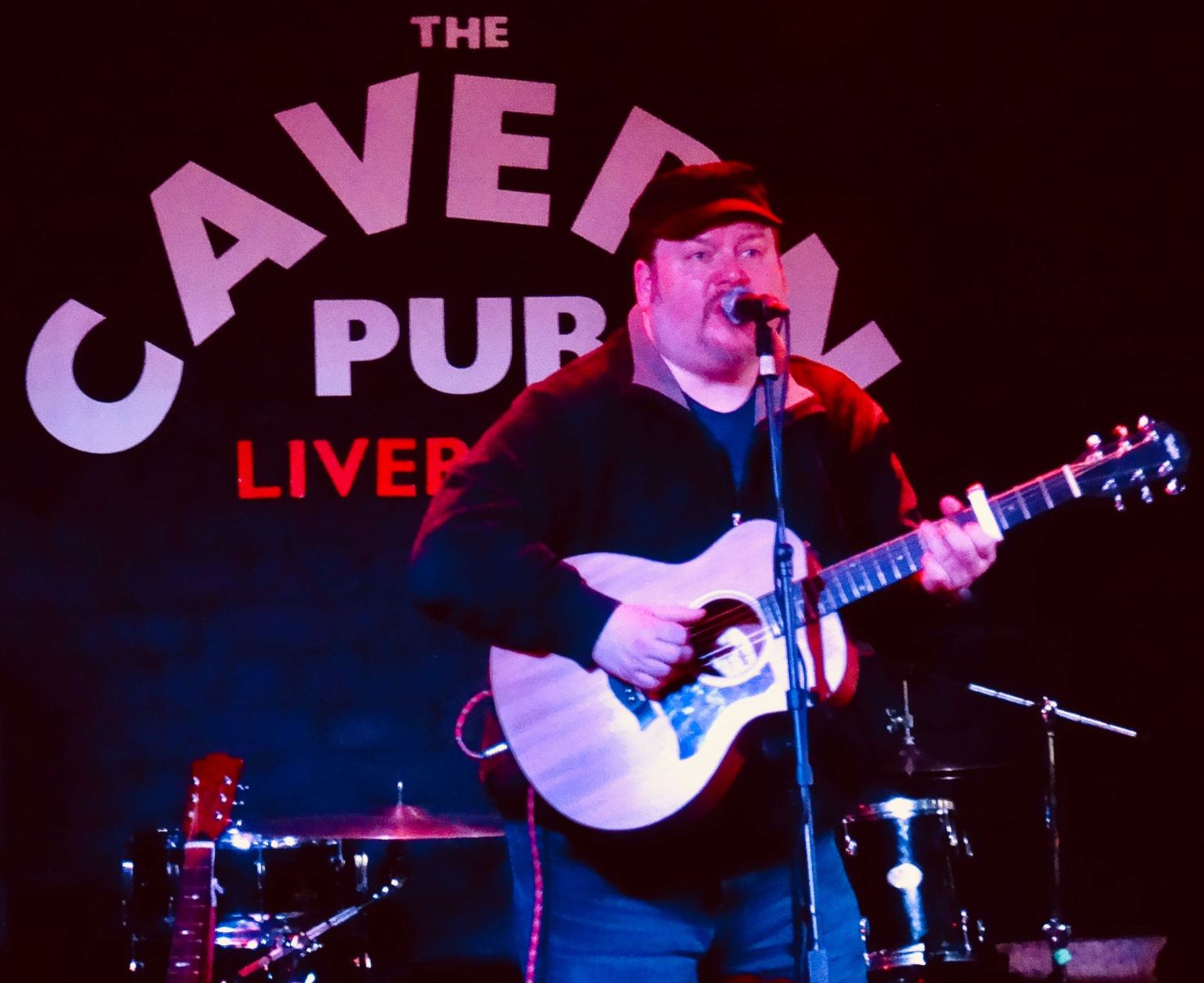 One of the main acts at The Cavern Pub that night was an established local artist by the name of Stuart Todd, aka Shadow Captain. This guy has a solid reputation across Liverpool both as a solo artist and for his work with the bands Campbell & Todd and The Freebies.

He played a bunch of songs that night, all of which channelled a familiar classic rock vibe. Thus it was no surprise to read that his many influences include The Beatles, Neil Young, The Kinks, Bob Dylan, Bruce Springsteen and The Rolling Stones. 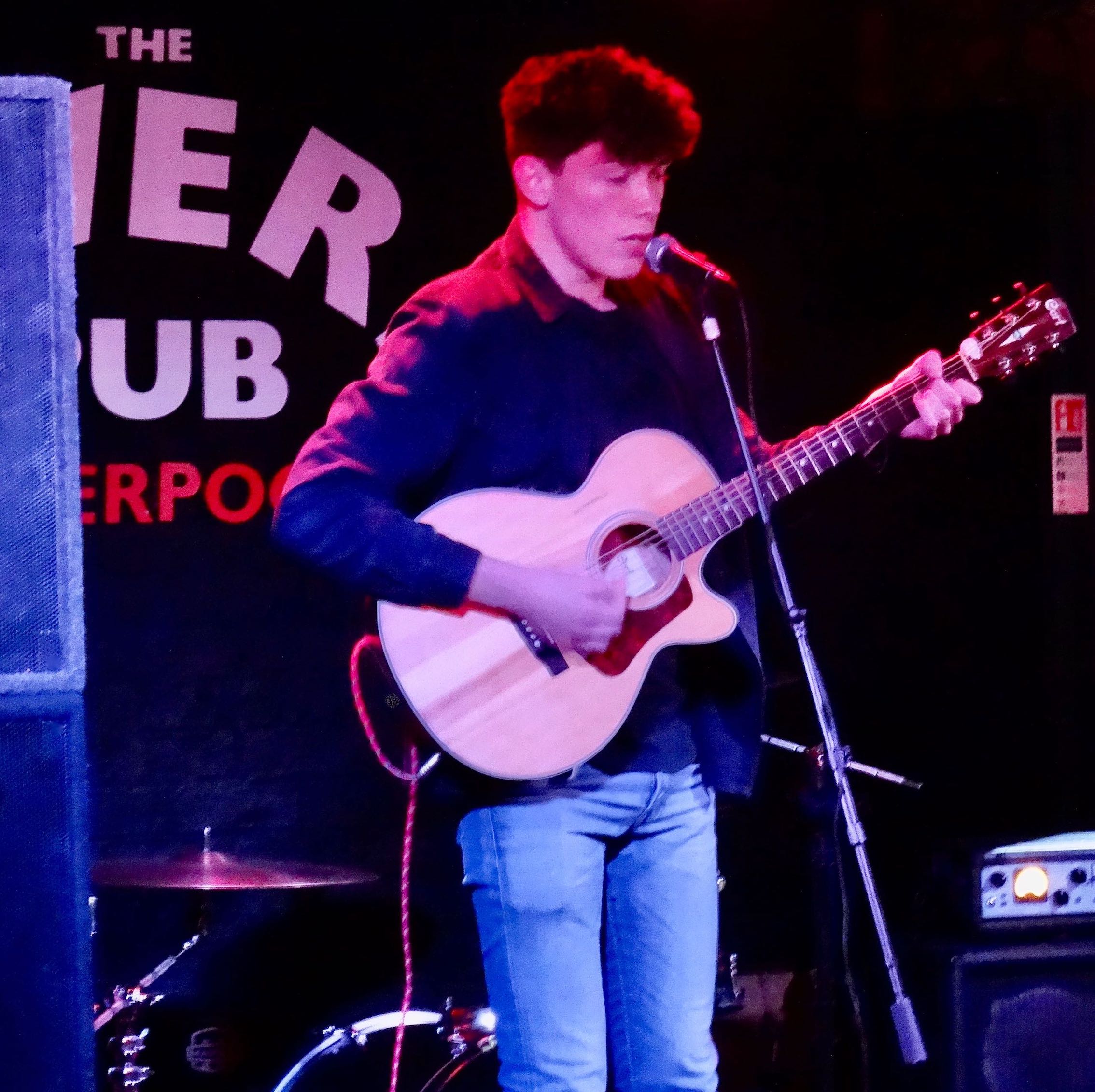 The venue also has a proud tradition of giving aspiring singer-songwriters their first opportunity to get up onstage. That night I got to see a debutant by the name of Ben Newport.

Introduced by MC Ian Prowse (frontman of the Liverpudlian band Amsterdam), a clearly nervous Newport sounded almost apologetic as he adjusted the mic. “I don’t think my song’s going to be as meaningful as that” he said, referring to the artist who’d played before him.

In the end Ben did just fine with his stripped back ballad about “overthinking a relationship”. It’s difficult to judge someone on just one song, but Ben seemed competent enough as both a singer and a guitarist. He has a classic Liverpudlian sound pitched somewhere between The Coral, The Stands and Jake Bugg.

To find out more about The Cavern Pub and what’s on, head to their official page. 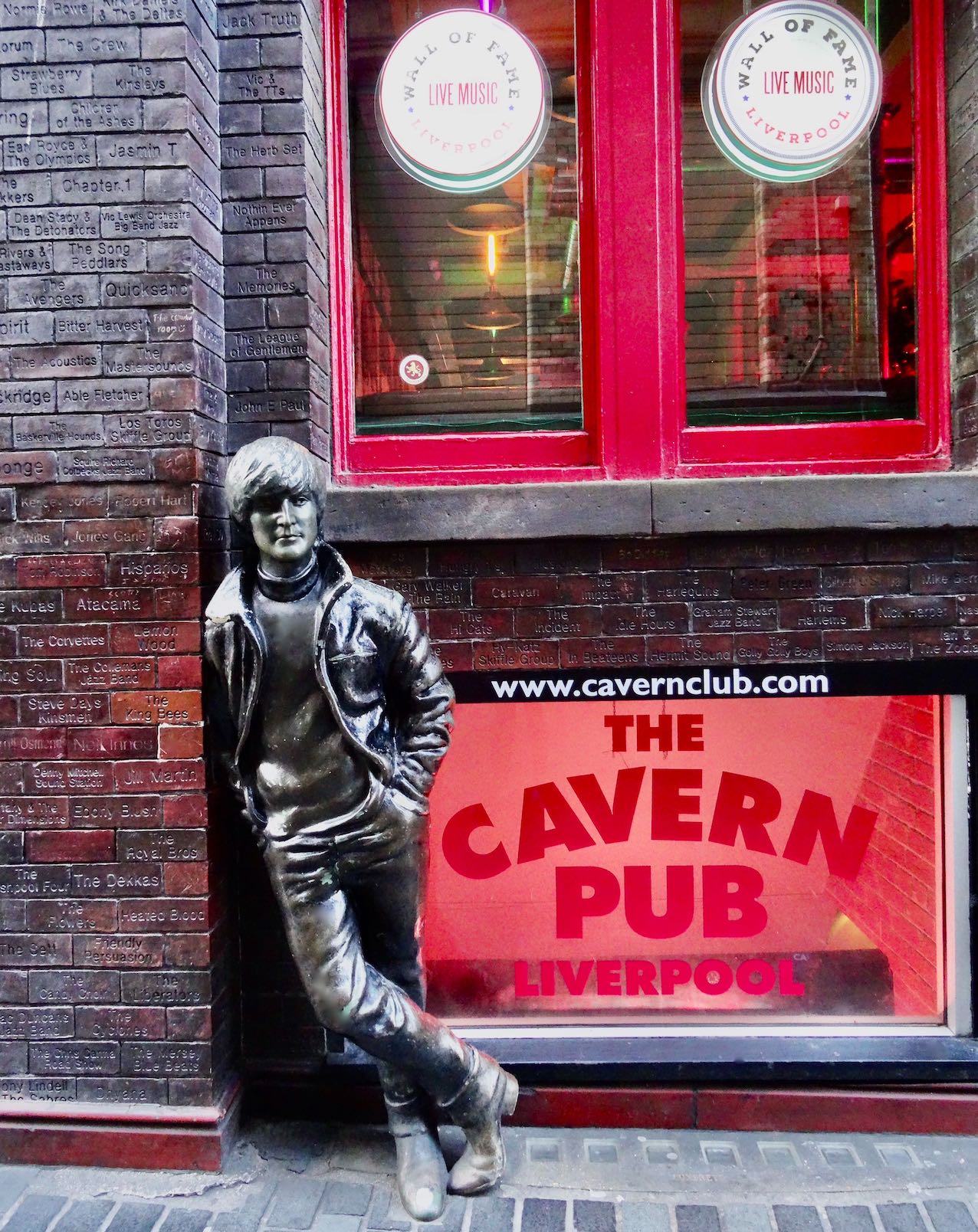 For more on the greatest rock band in history, check out my articles from The Beatles in Liverpool. Alternatively, have a read about my visit to Abbey Road in London. Maybe check out my review of The White Album.