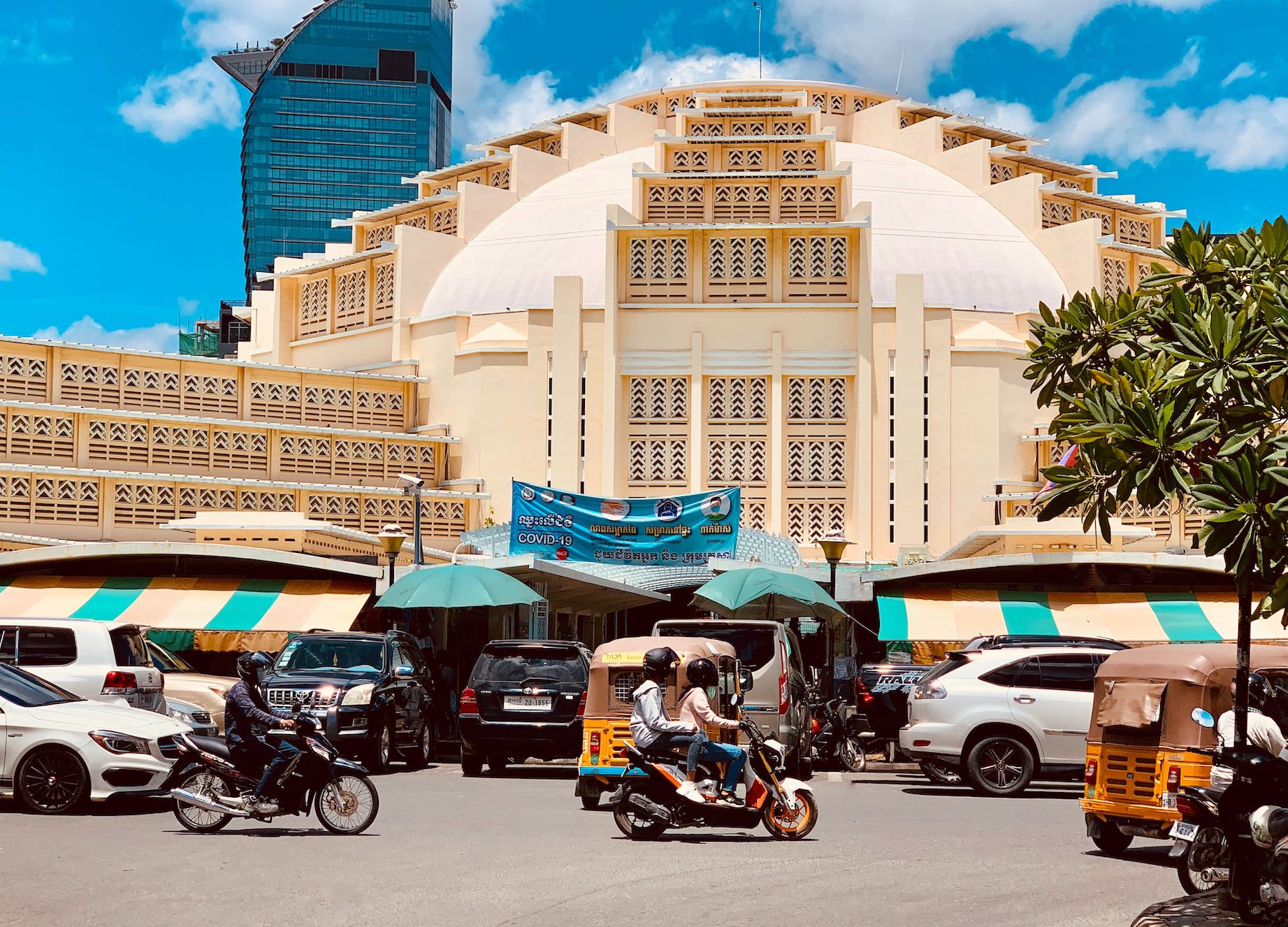 September 2020. I really love the old French Art Deco buildings across Cambodia. From the shapely structures of Siem Reap and Battambang, to the crumbly, balcony-laden houses of Kampot and Kep, we had seen dozens of the country’s most impressive colonial creations.

One afternoon, in Phonm Penh, we mapped out a walking route to one of the capital’s most historic Art Deco delights. You certainly can’t miss the bright yellow Central Market, with its 26-metre dome. Locals refer to it as Phsar Thmei, which roughly translates as New Market. 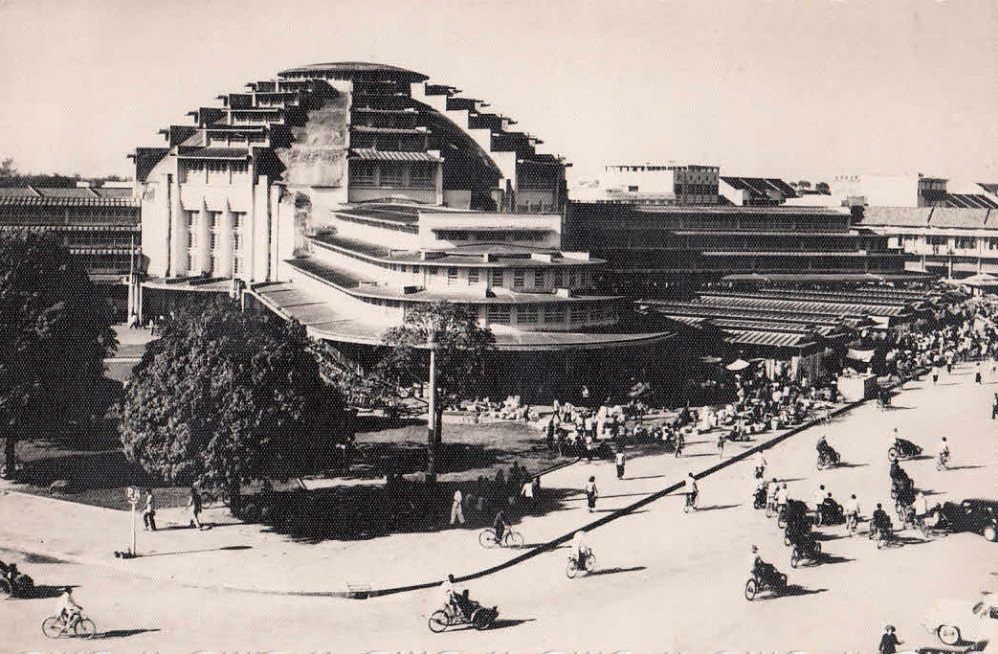 Construction began in 1935 on the site of a huge swamp that city authorities had drained. Two big name French architects arrived to oversee the project, Jean Desbois and Louis Chauchon.

Two years later, in the summer of 1937, Phsar Thmei opened its doors as Asia’s largest indoor market. The building has seen its fair share of tough times over the decades. In 1941 an aircraft bomb caused heavy damage during the Franco-Thai War. Moreover, the complex bore the scars of both World War II and The Khmer Rouge dictatorship of the 1970s. 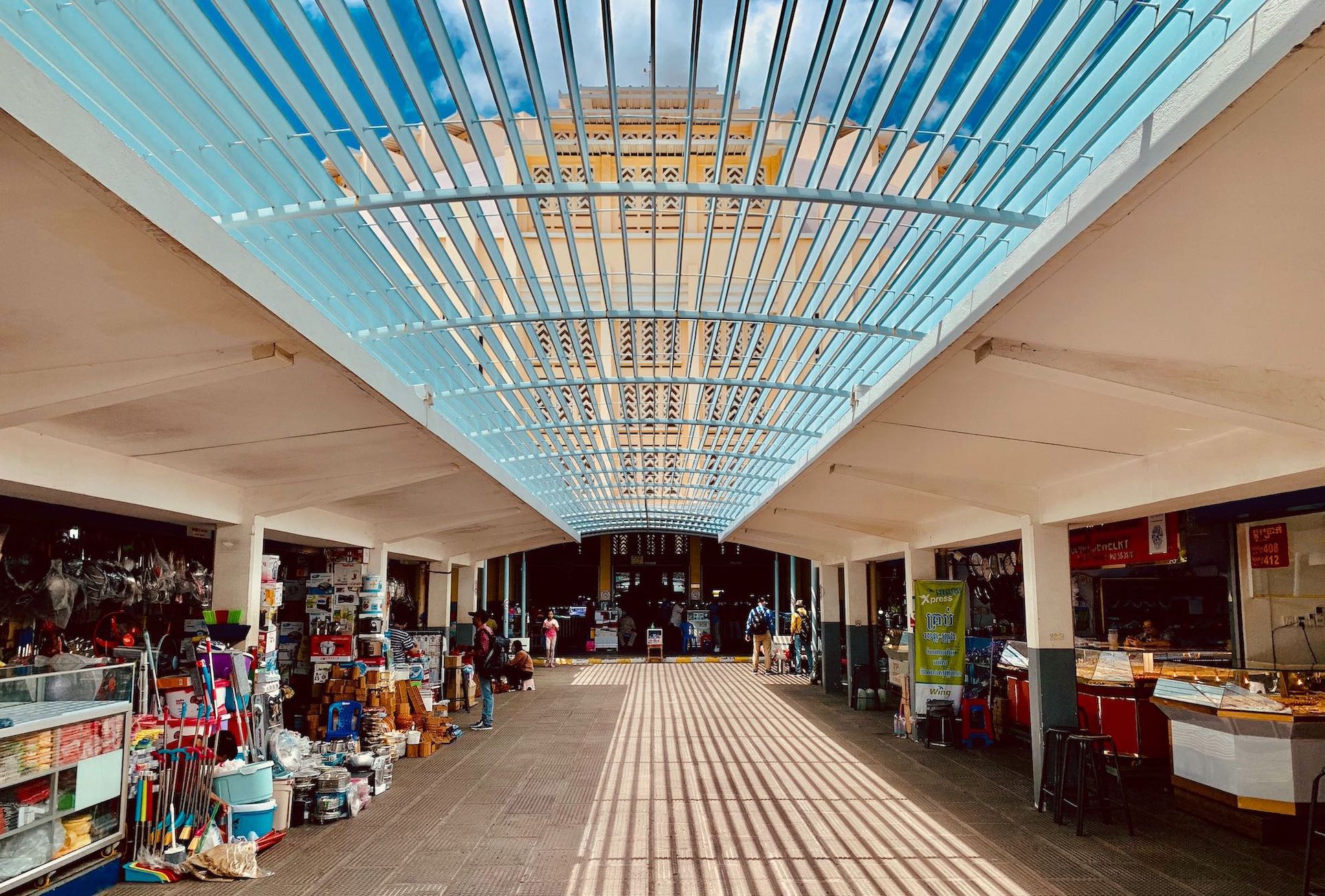 Finally, in 2009, Central Market underwent the $4 million renovation project responsible for the centre we see today. We entered via one of the four arm-like corridors that branch diagonally out of the central hall. With no tourists and little domestic foot traffic, it was a far cry from the frenetic buzz one would experience in normal times. 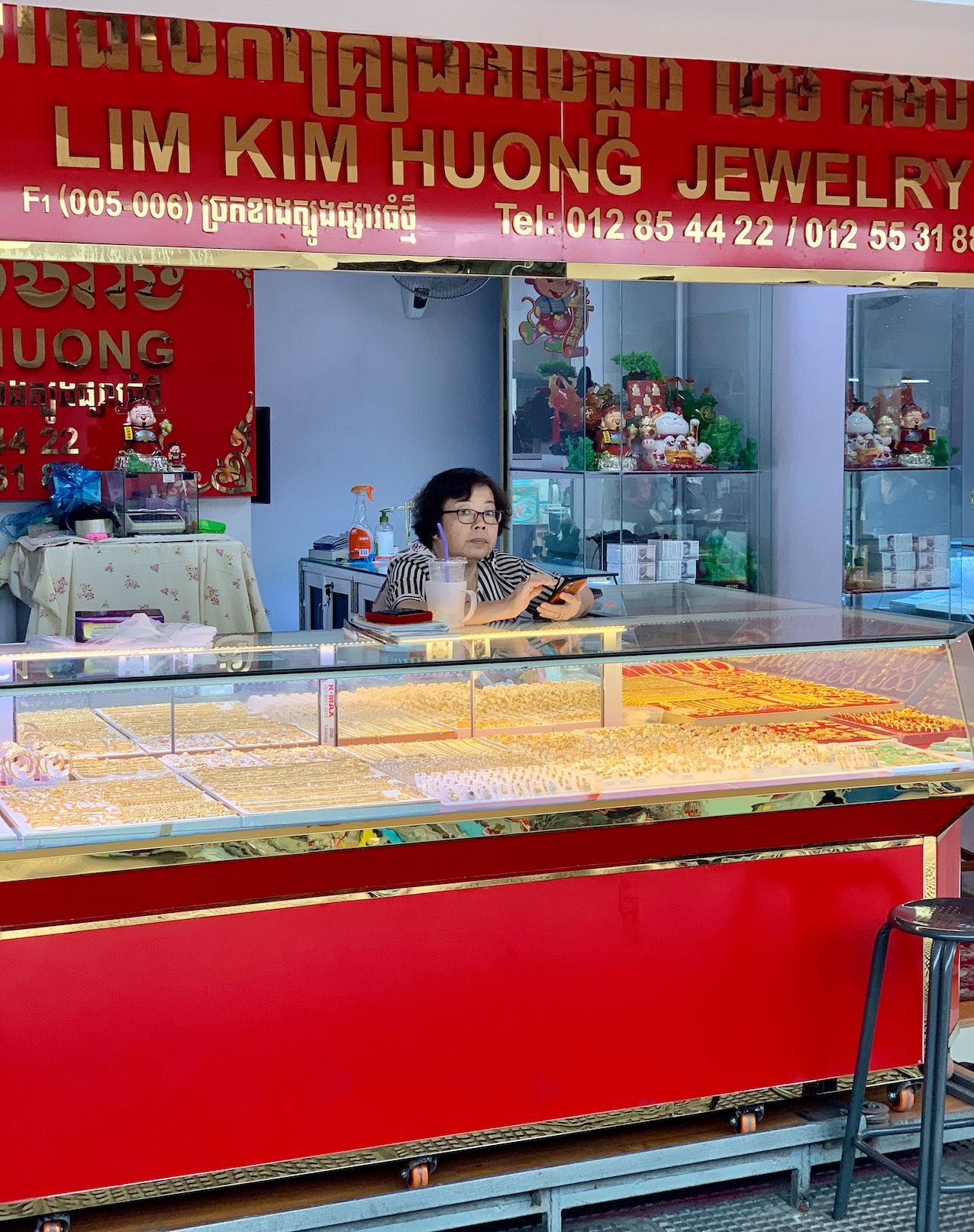 The market is home to dozens of jewellery shops, many of which are Chinese owned. But there wasn’t much happening at Lim Kim Huong Jewellery that day. 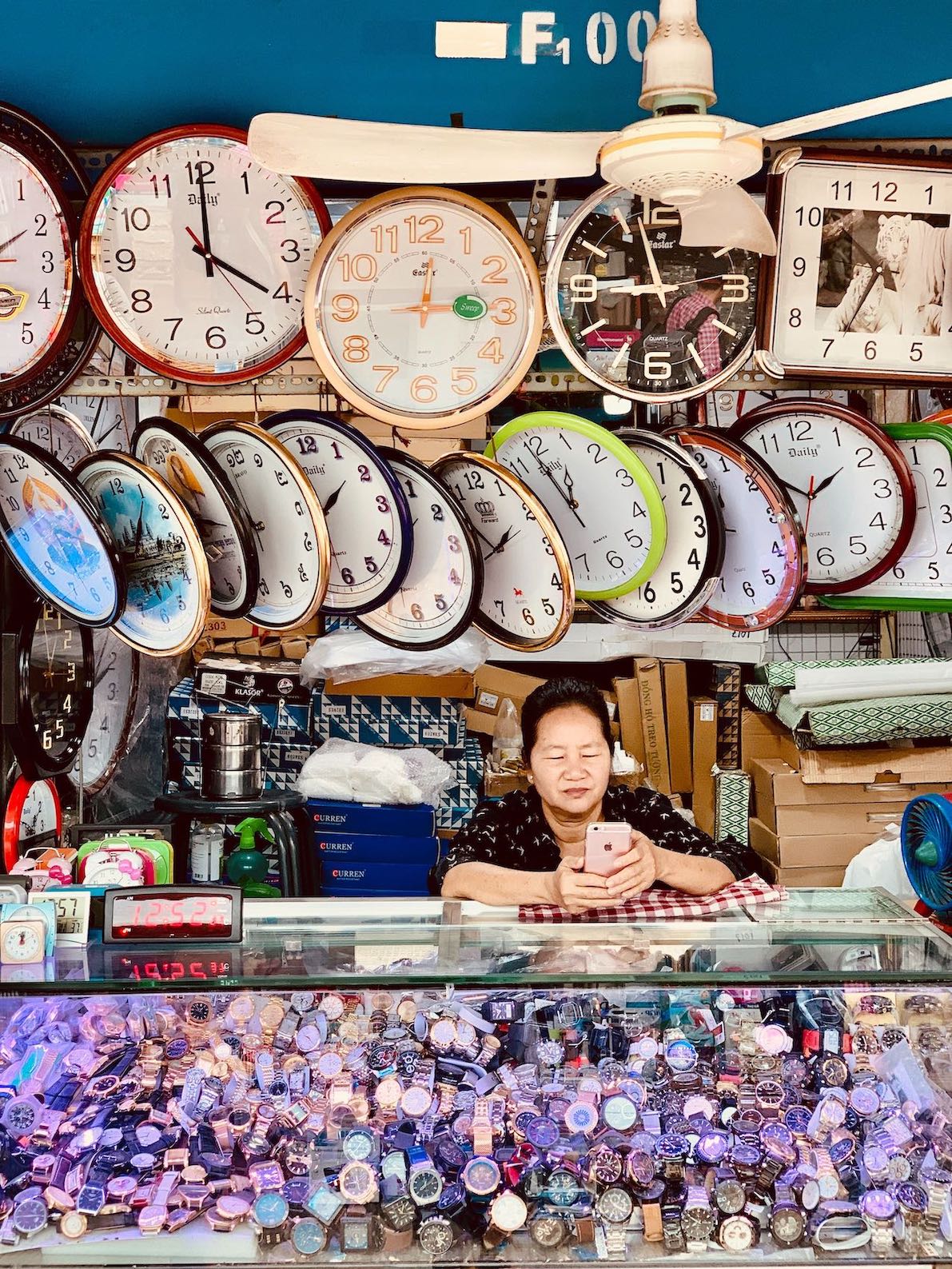 It was similarly dead at this store, crammed with watches and clocks. I was half tempted to ask the Khmer owner if she knew what time it was. Then thought better of it. 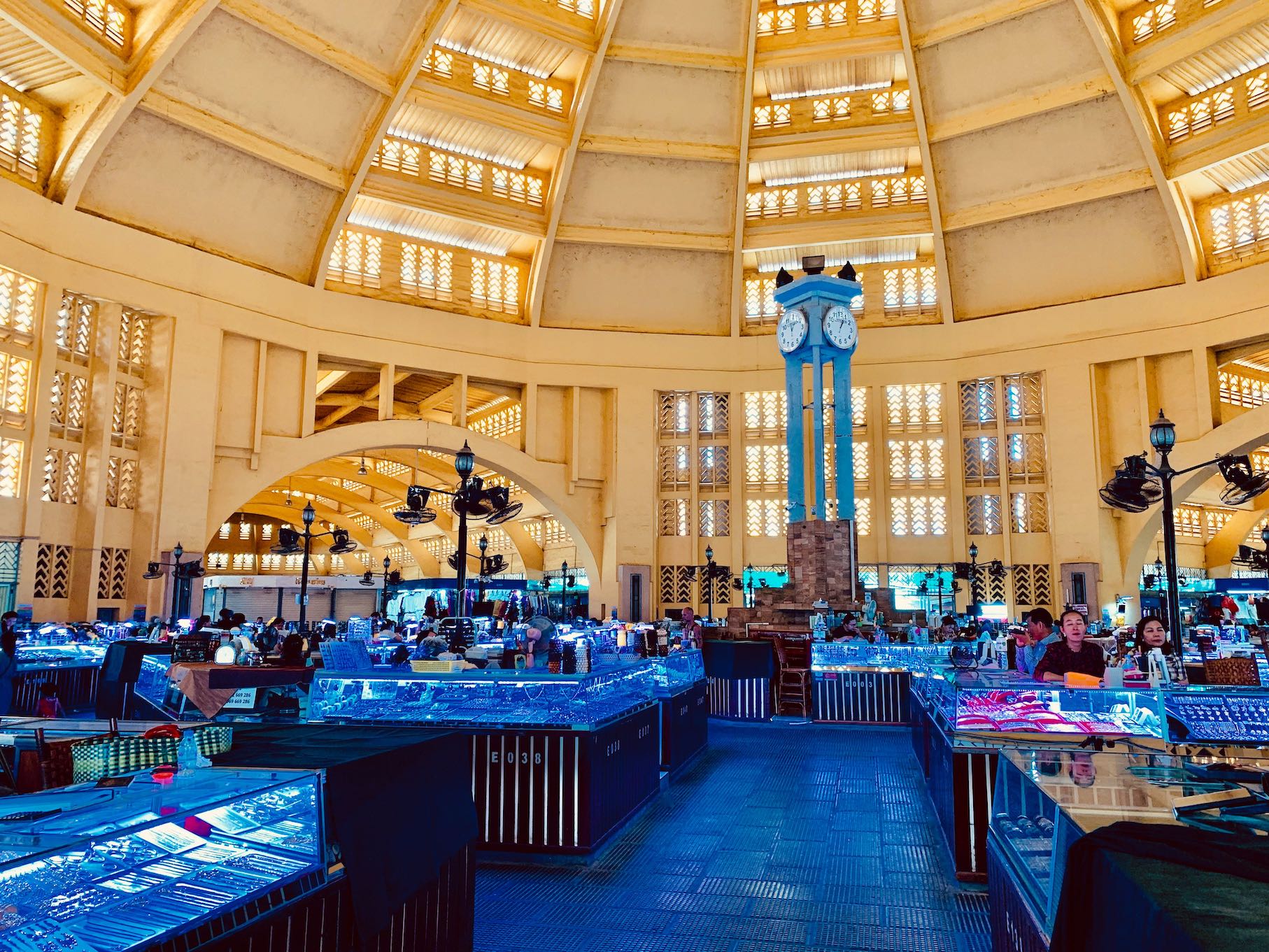 The domed main hall is absolutely gorgeous with its quartet of curved arches and blue clock tower. This handsome four-faced clock arrived in 2012 to replace an old 1930s clock that was beyond repair.

Its four sides are a nod to Phnom Penh’s nickname, The City of Four Faces. This is due to the fact that three rivers, The Mekong, Bassac and Tonle Sap, all meet at the city to create four distinctive characters. 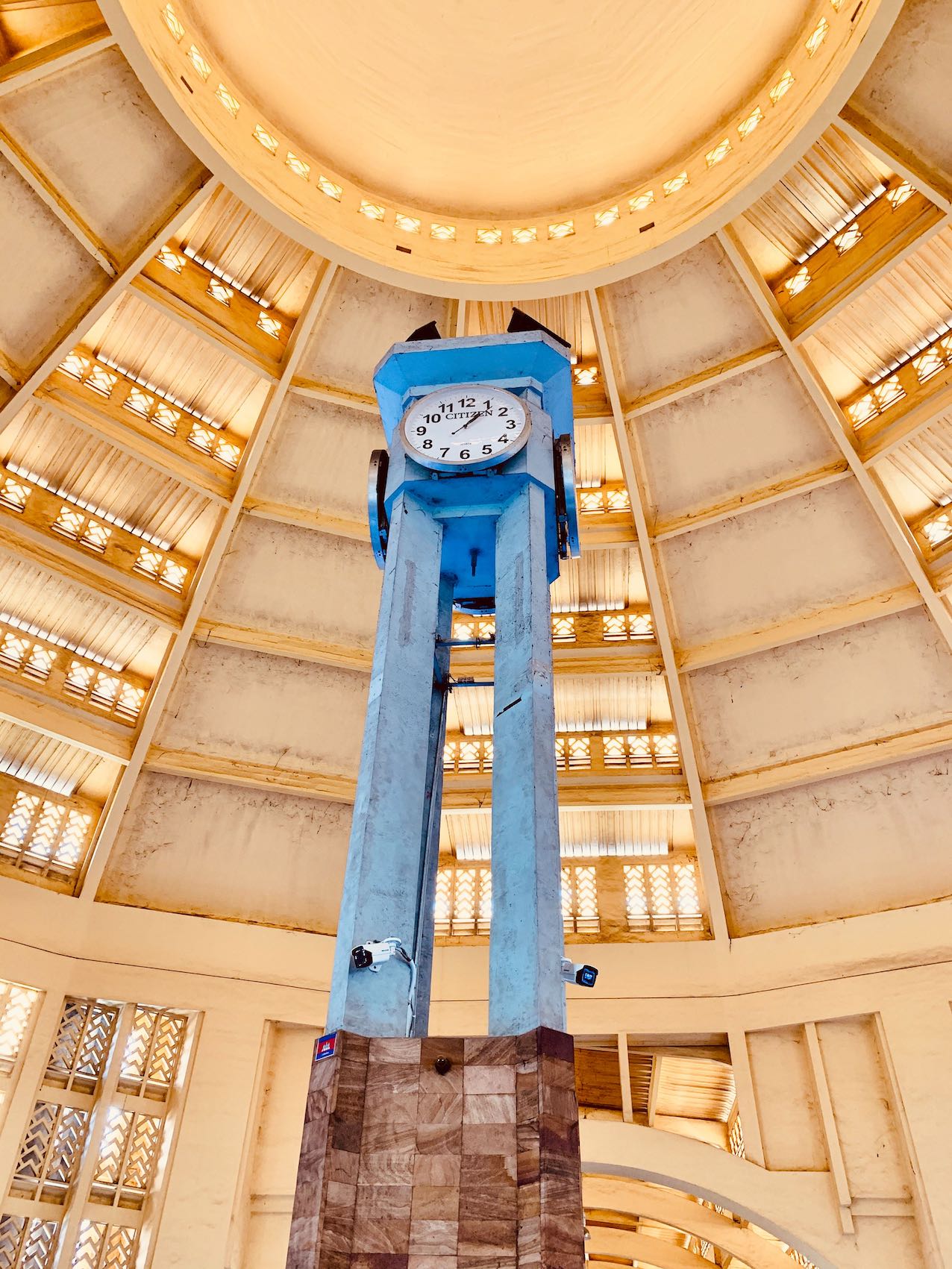 Phsar Thmei’s overwhelmingly sleepy vibe prevailed throughout the main hall. In fact, vendors hardly lifted their heads to look at us. Rather, they snacked on noodles and played with their phones. For this man, the lack of customers was the perfect opportunity for an afternoon snooze. 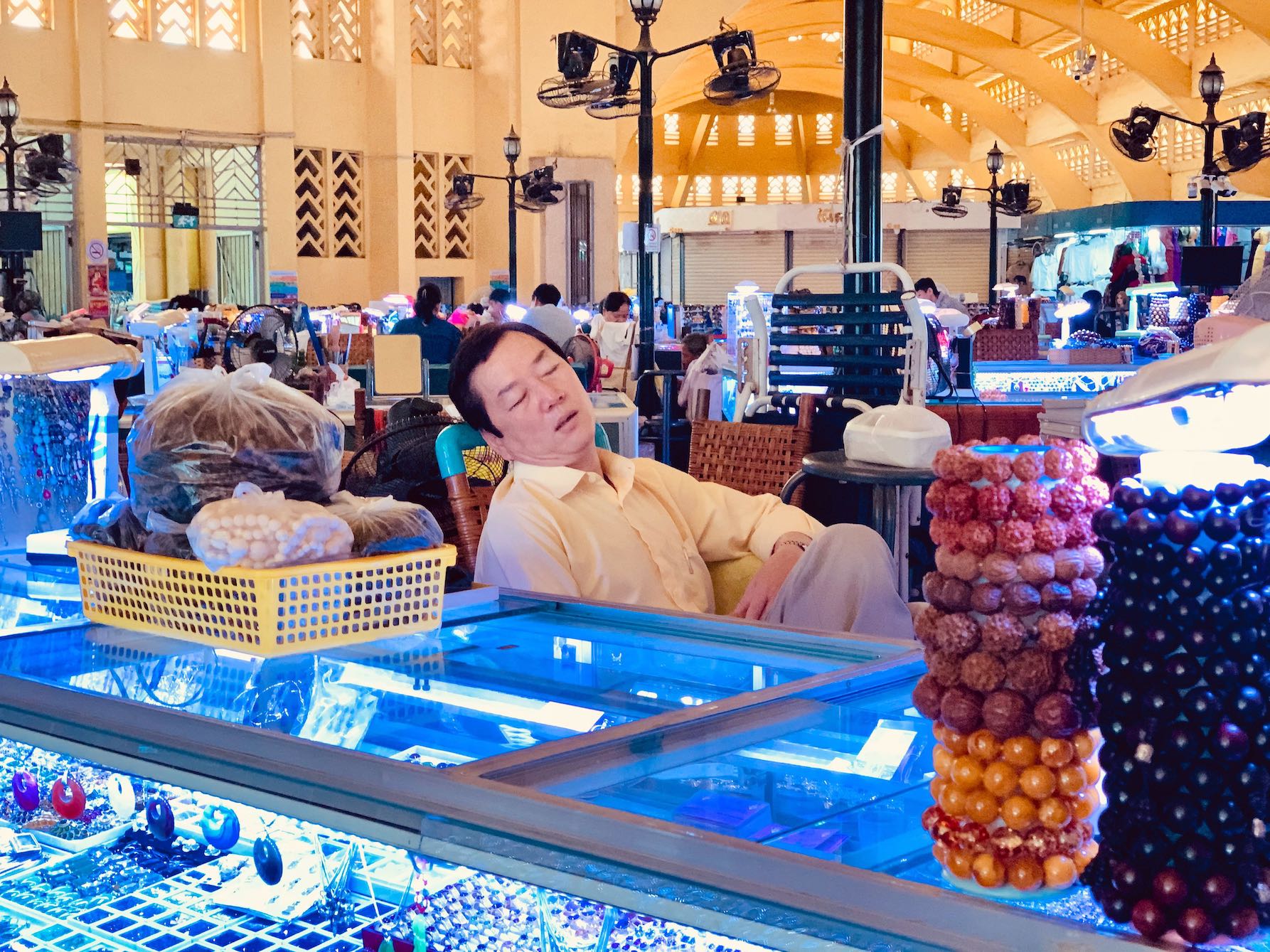 With little interest in shopping, we made do with a leisurely stroll around the hall before exploring a number of Central Market’s narrow lanes. Clothes stalls seemed to dominate, though once again there were virtually no customers. “Just look” mumbled one man half heartedly. “Many size, cheap for you” said another with a hopeful smile. 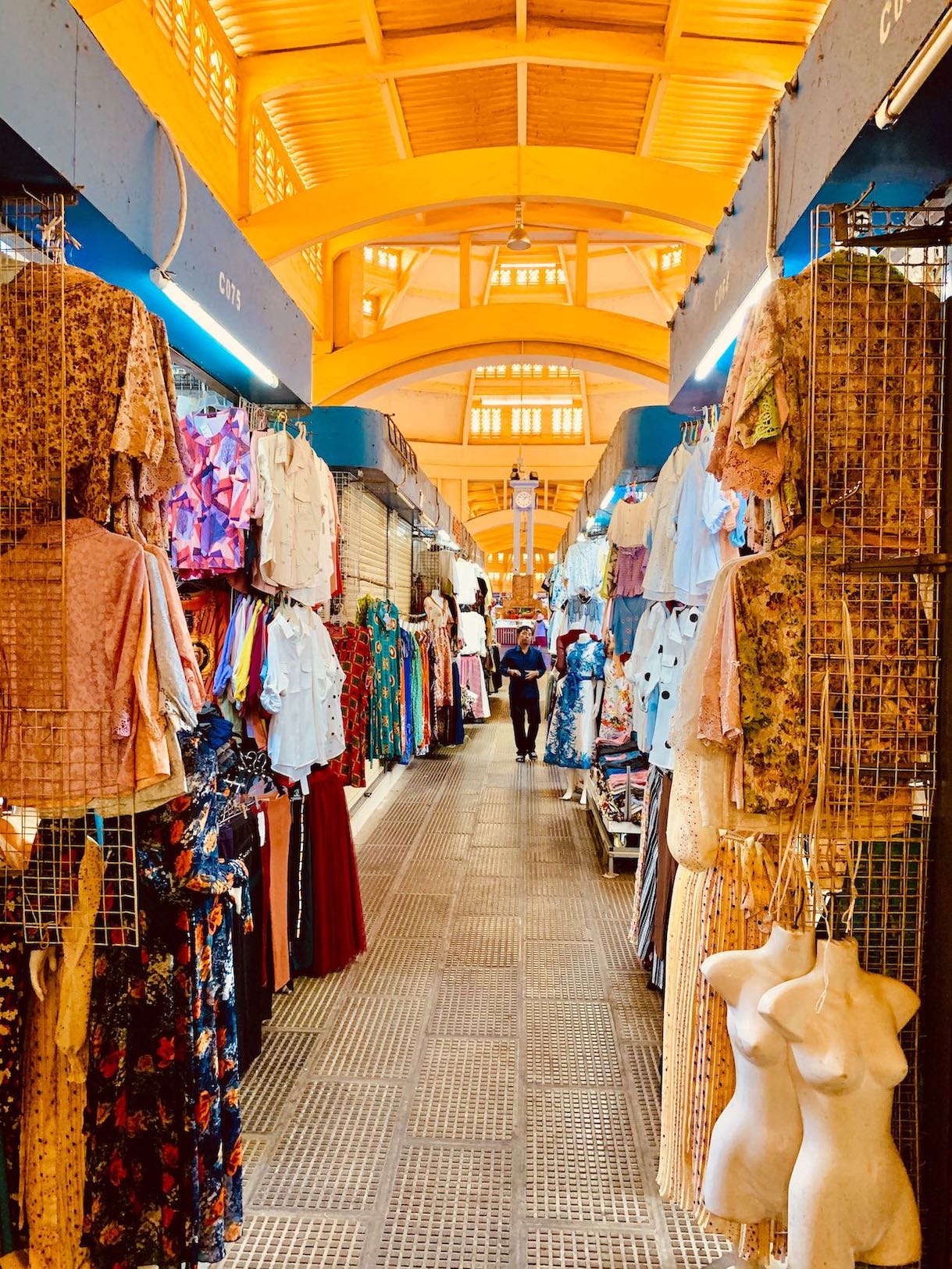 In the narrow outer lane that runs all the way around the complex, we came across a large food section. There were numerous fruit and veg stalls and vendors peddling a full range of meats in addition to fresh fish. This was definitely the busiest part of the market, serving almost exclusively local customers. 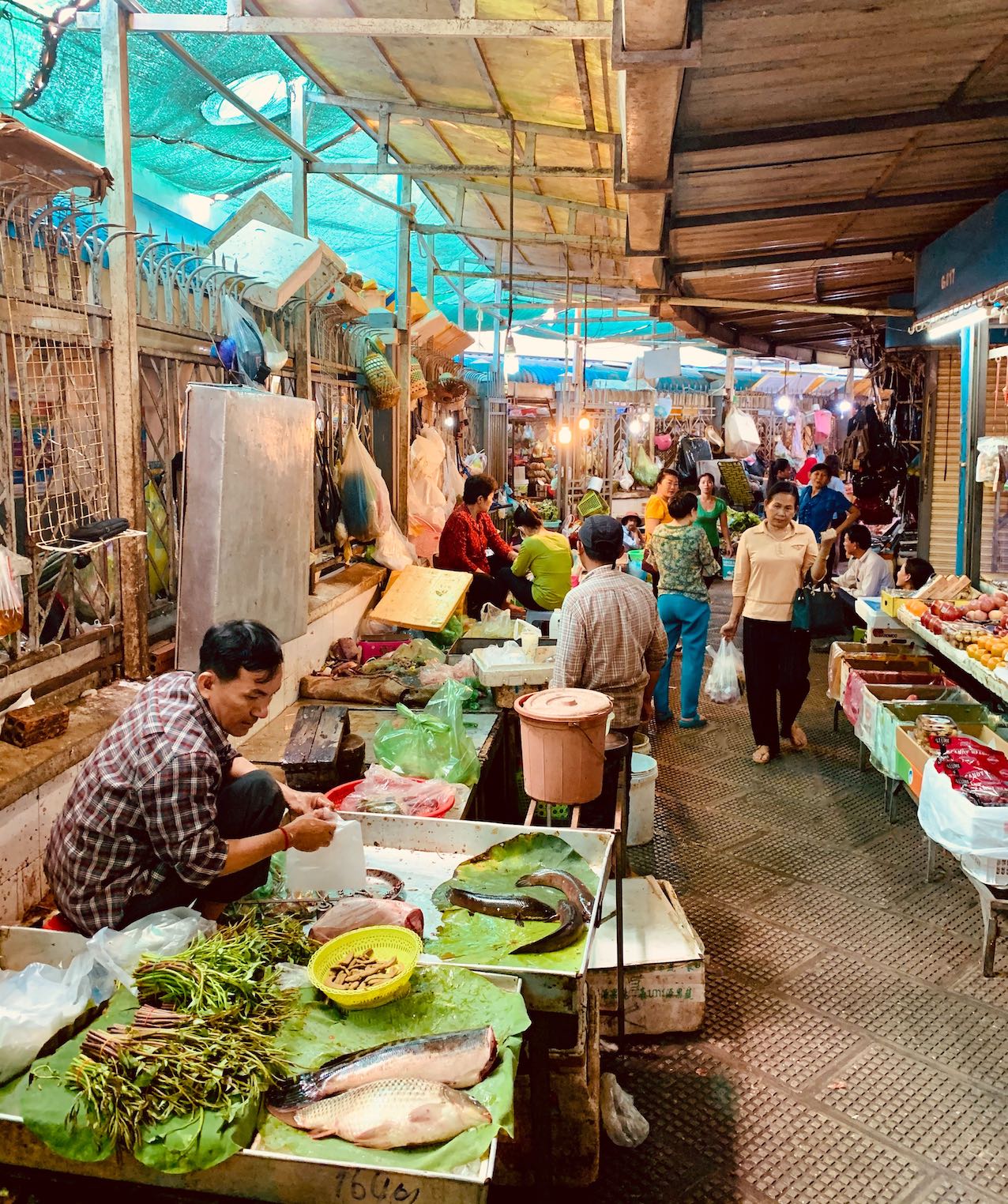 We also came across a row of tailors and seamstresses. Each worker had a small space from which to operate their sewing machines and hang the various wares of the day. This reminded me of my own clothes and their various holes and tears. 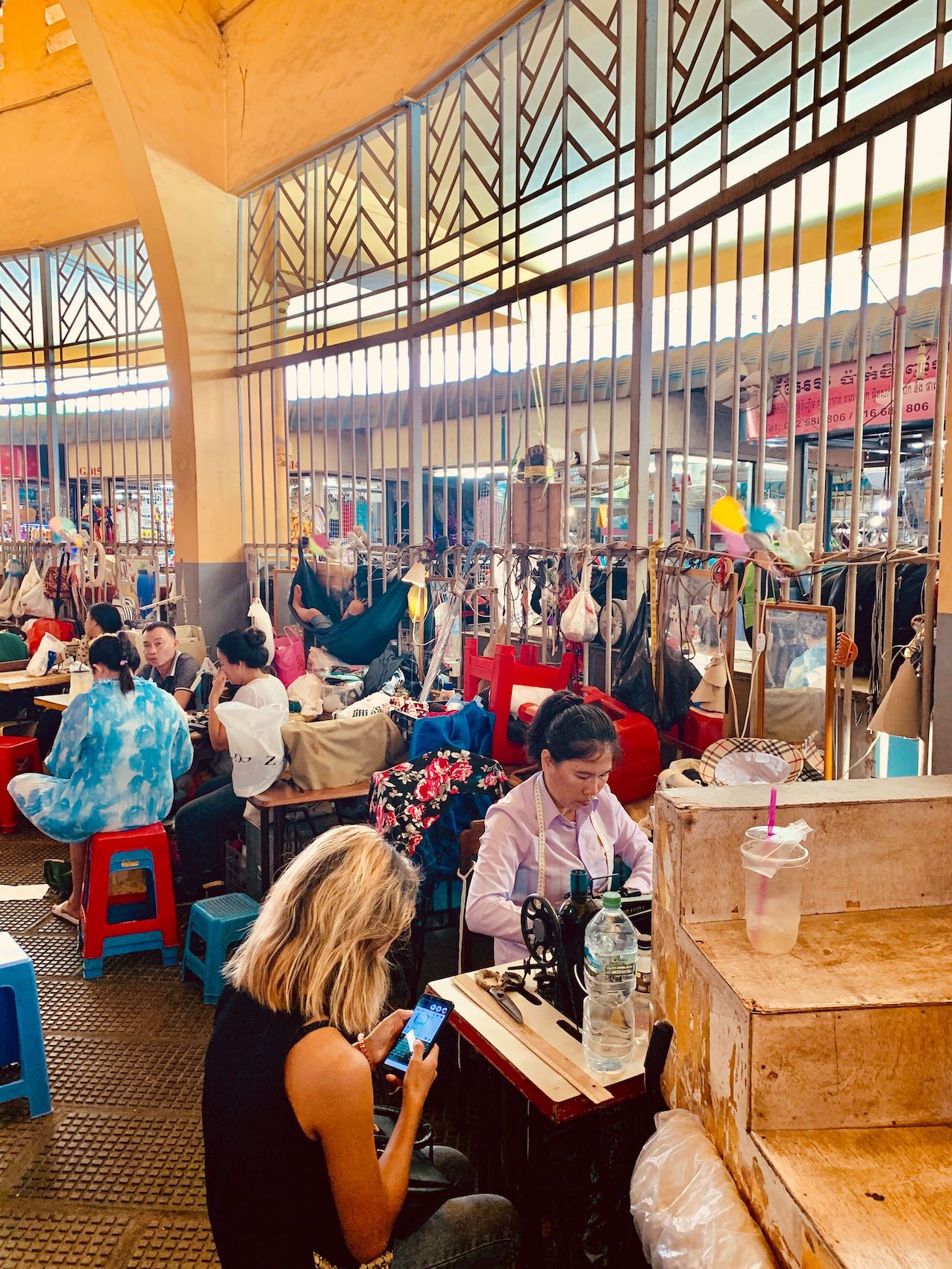 We also passed a number of general stores, pharmacies, booths selling electronics and kitchenware stalls. There were even a few hairdressers thrown into mix, like the one pictured below. Space wise it was barely bigger than a cupboard, just enough room for the hairdresser, two active customers and one waiting spot on the wooden bench. 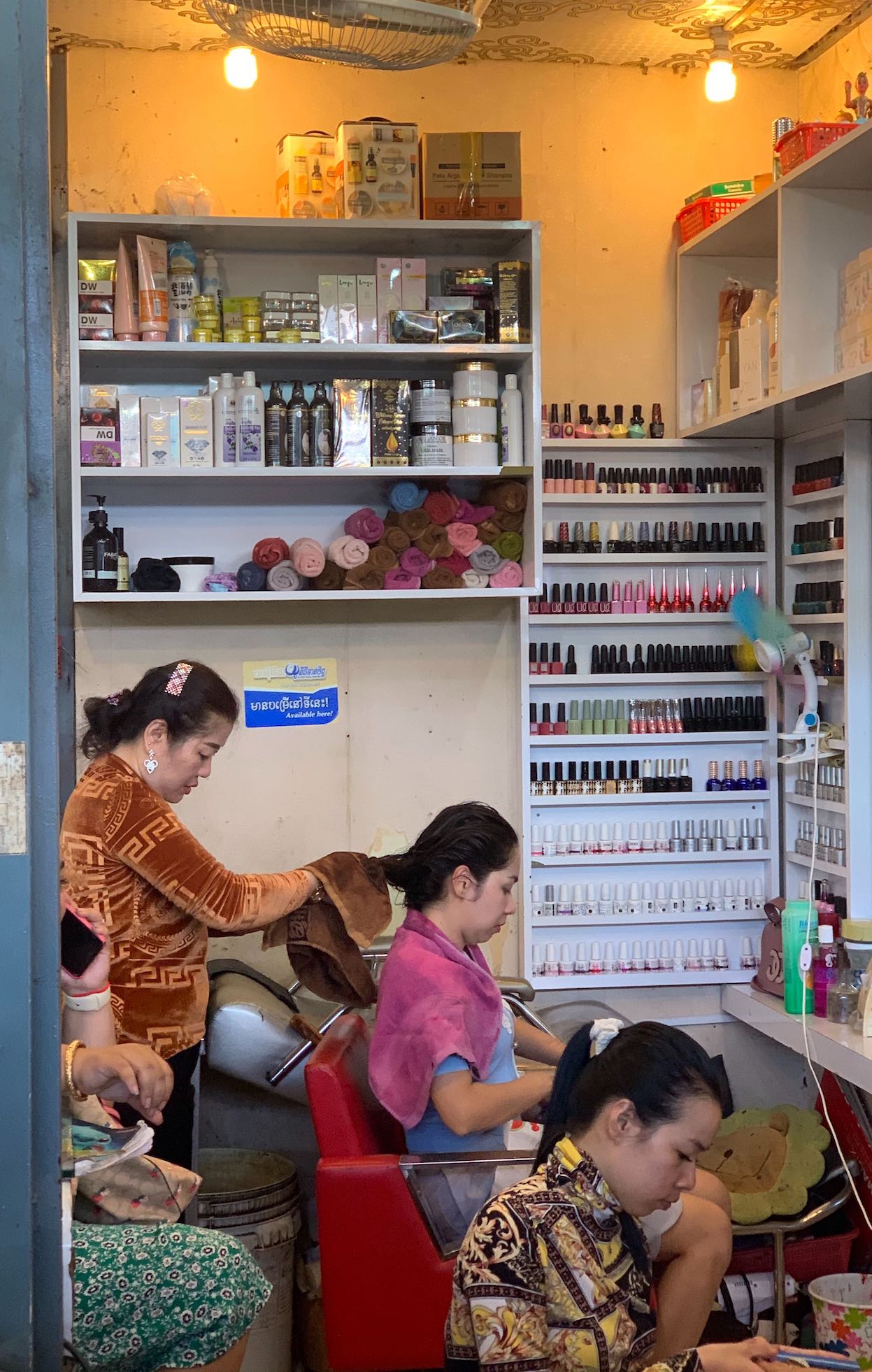 We enjoyed our brief but interesting stroll around Central Market. If you’re in the centre of Phnom Penh this is an essential sight that won’t take too much of your time. Unless, of course, you plan on an intense shopping expedition.

Located on Street 128, it opens daily between the hours of 06:30-17:30. Generally speaking, prices here are inflated for tourists. Whatever you’re buying, try to negotiate down to at least 50% of the original asking price. 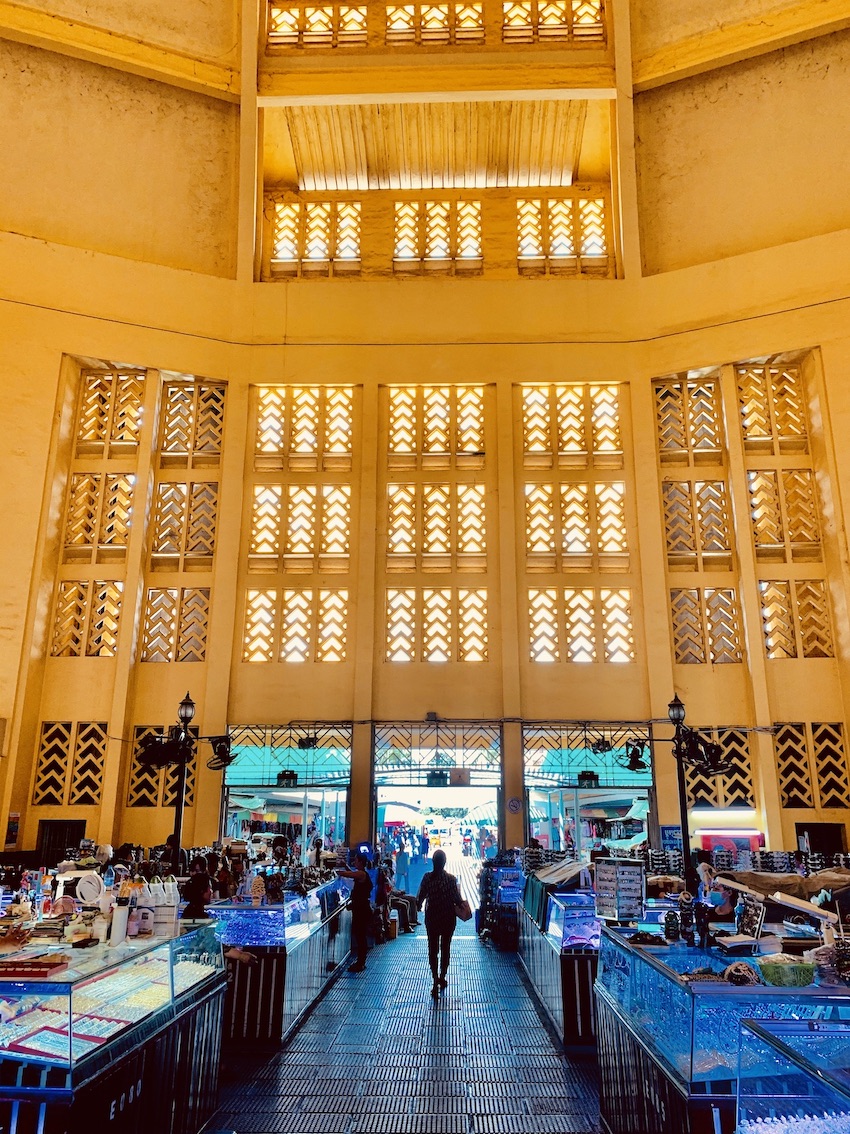 For more info on my adventures in and around the city, have a leaf through my other reports from Phnom Penh.

Like these? Then why not have a look at my articles from across Cambodia.