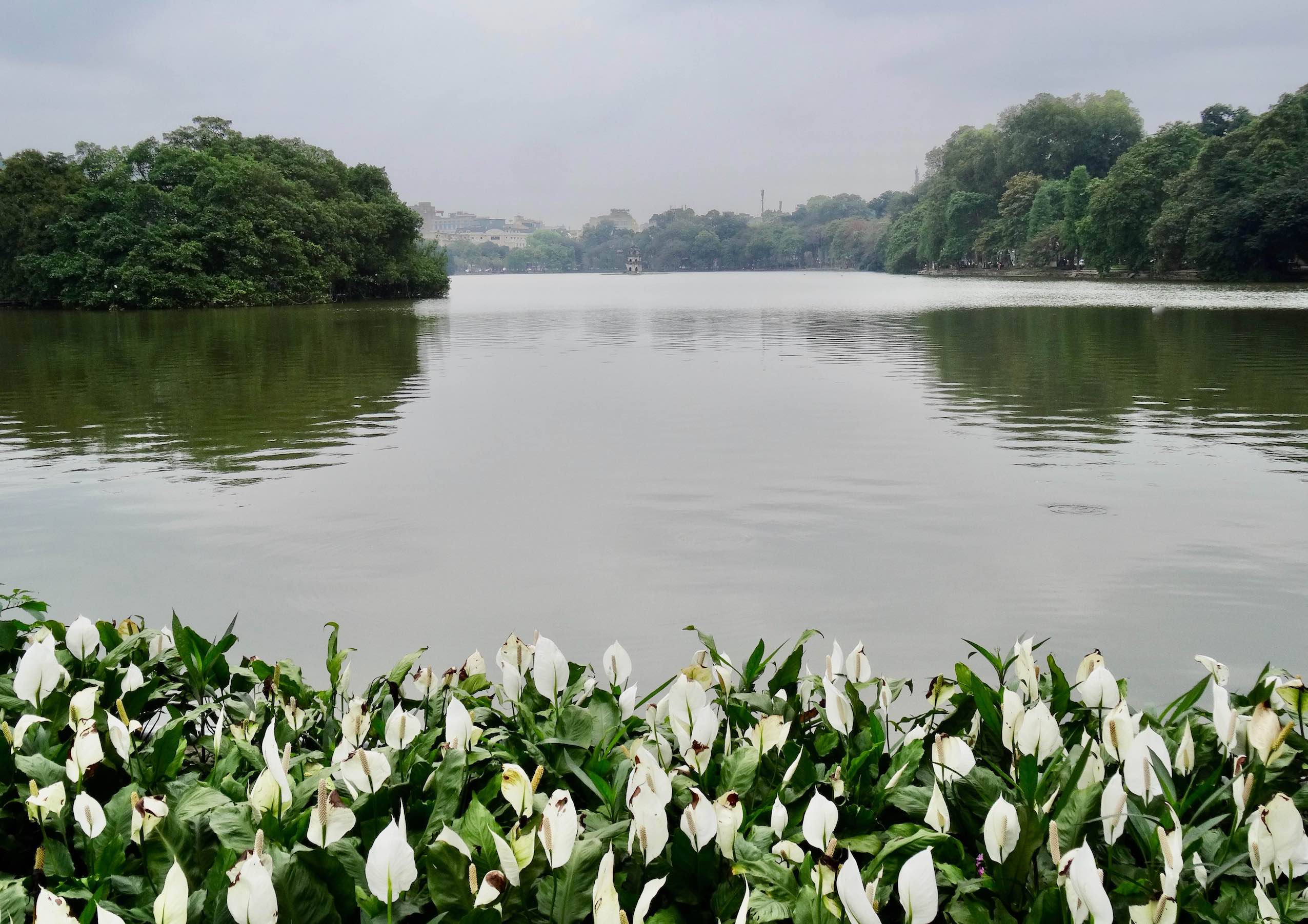 It was a hot and sticky overcast afternoon in Hanoi as I set off for some exploring around one of the city’s two great lakes. They say if you only have time for one, it should definitely be Hoan Kiem, a tranquil 12 hectare freshwater lake that holds a special place in Vietnamese mythology. 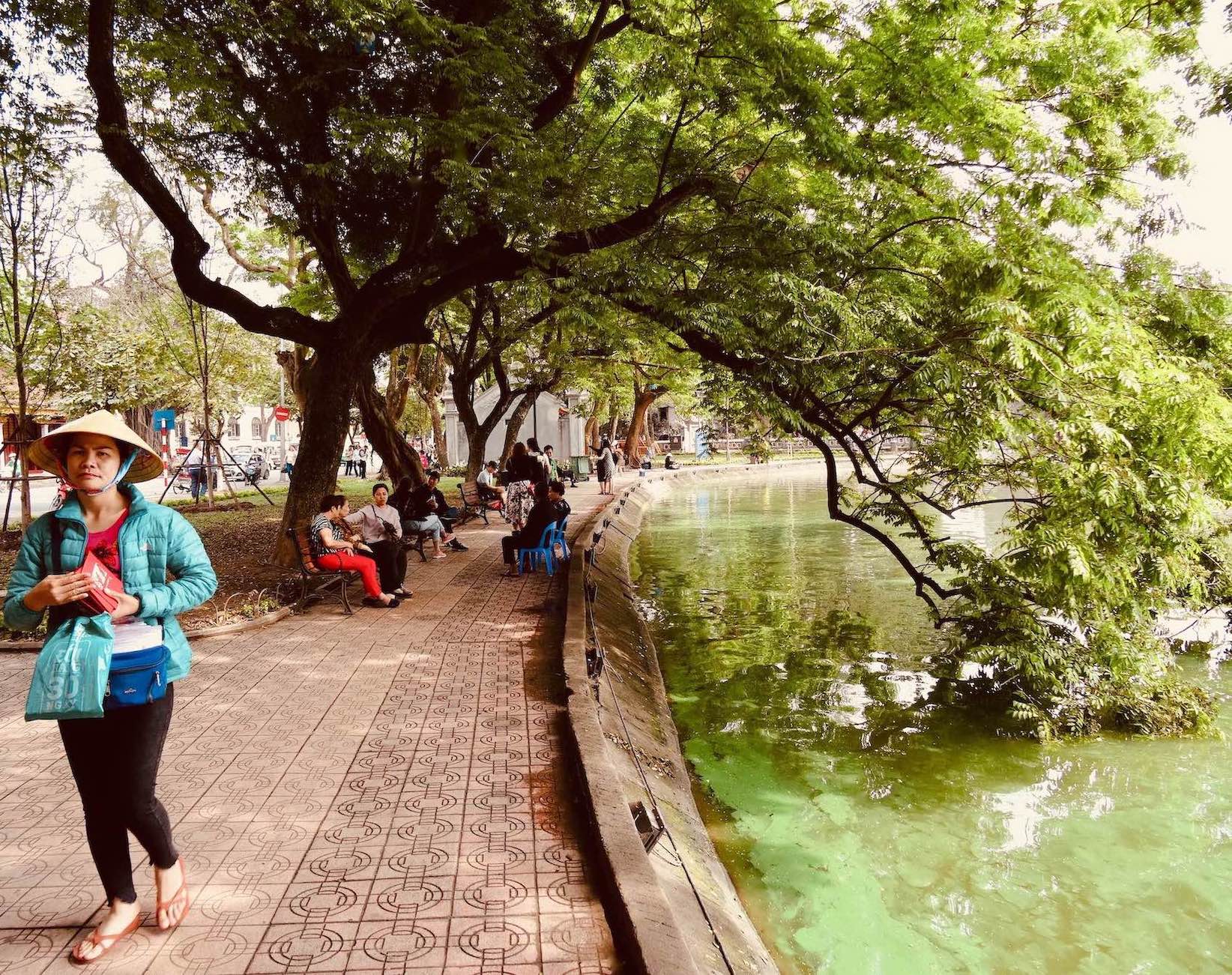 The lake is hundreds of years old, dating as far back as the 13th century, some historians say. Back in those early days locals called it Luc Thuy, which means Green Water. Pleasingly, this mystical deep green colour remains today and certainly fits with the area’s reflective, laid-back vibe.

In fact, if there is one spot from which you can truly escape the unrelenting buzz and fuzz of Hanoi, it’s Hoan Kiem Lake. First, local authorities have banned scooters from the stone walkway running round the water. Moreover, the entire stretch is largely free of street vendors. Furthermore, traffic in the surrounding streets is usually banned from 19:00 to midnight, which makes for a particularly peaceful sunset experience. 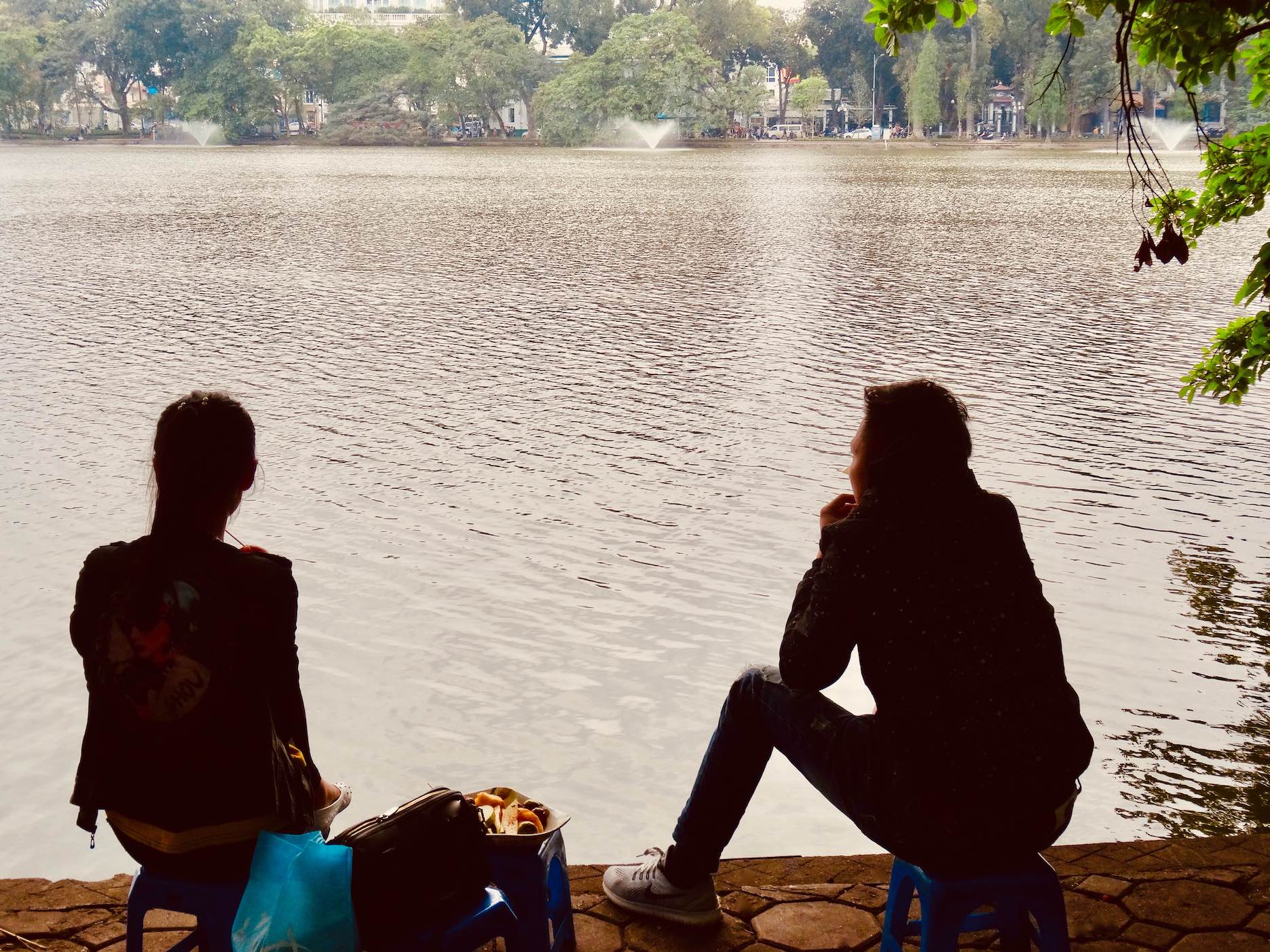 It is especially chilled in the mornings, when Hanoi’s oldies flock to the lake to practice their tai chi. On the afternoon of my visit I caught a few old guys fishing and several couples picnicking silently by the water’s edge. 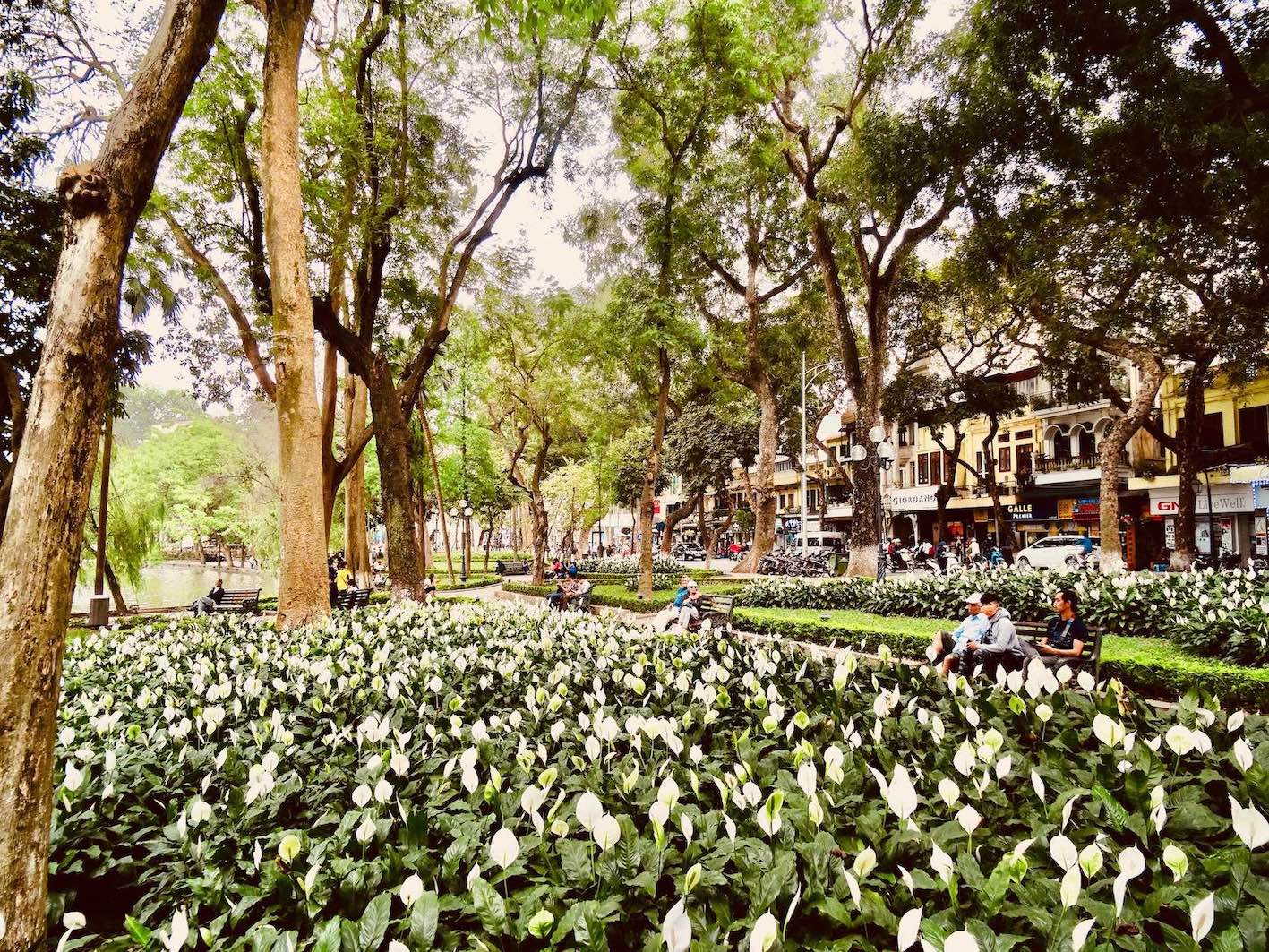 And then there’s the gorgeous sea of beautifully kept flowerbeds. And the narrow, bench-laden stone path that runs between them. The flowers themselves rotate depending on the season. According to my friend and all-round flower expert Dr. Phil, these are Peace Lilies, or Spathiphyllum if you want to get technical. 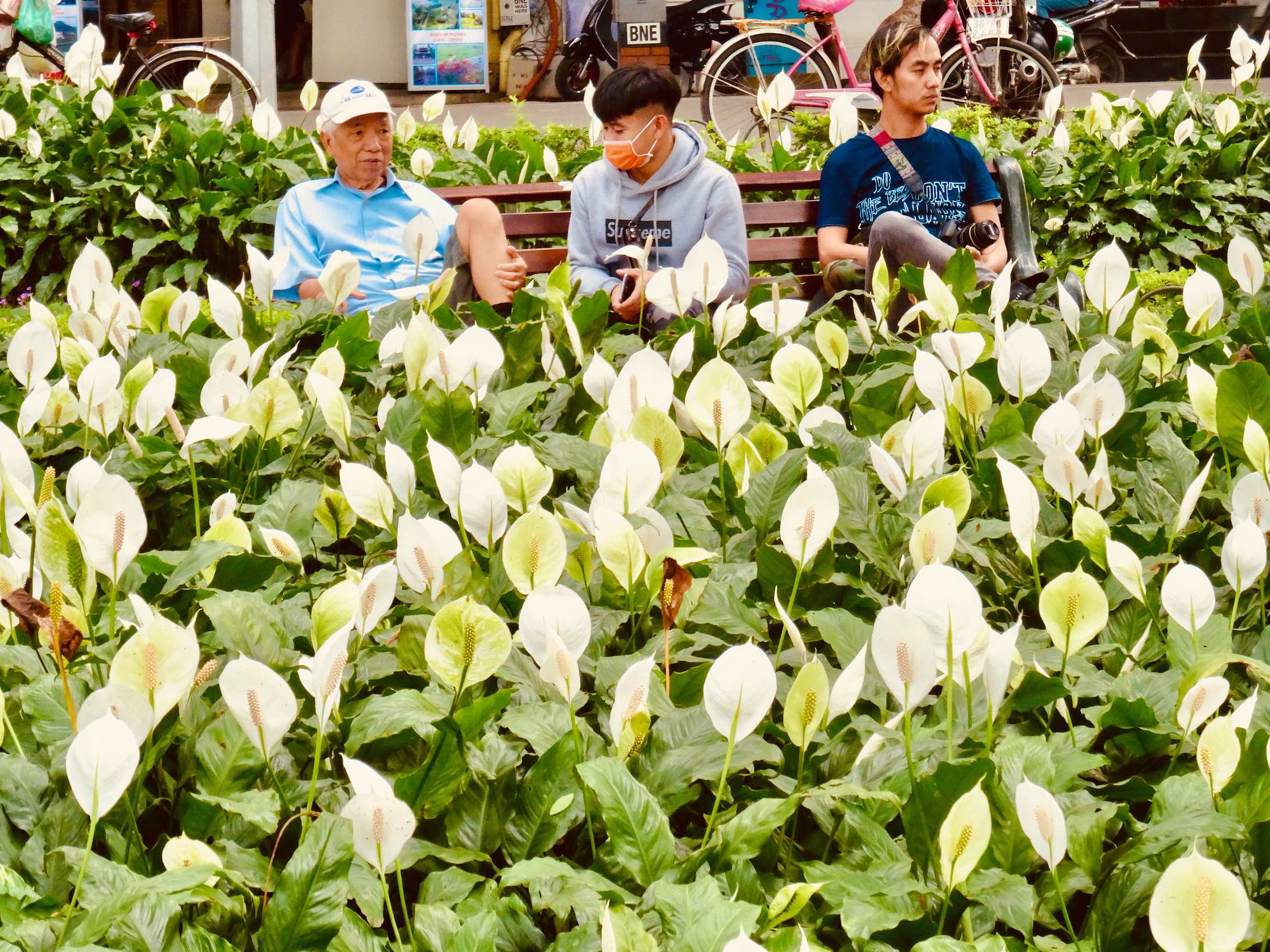 The lake’s name changed to Hoan Kiem after the legend of the Warrior King Le Loi and the Golden Turtle. Le Loi was a revolutionary soldier who led a great army to fight against Chinese Ming rule in 1418. Known as the Lam Son Uprising, Loi’s relentless nine year campaign eventually saw Vietnam liberated, cementing his reputation as one of the country’s great national heroes. 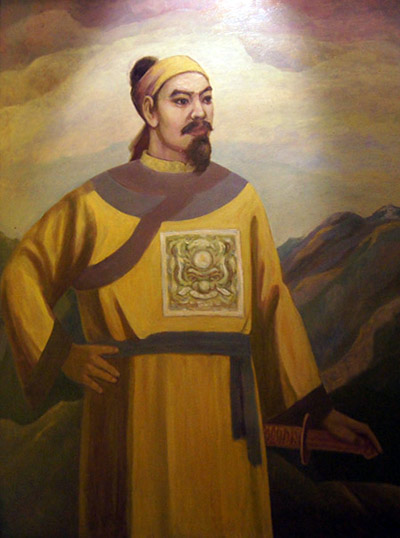 I’ve got to tip my hat to the legend, which does a great job of spicing up the narrative. Basically, it dictates that Le Loi’s victory was greatly aided by a magic sword given to him by Long Vương, a dragon god. The sword, as the story goes, transformed Le Loi into a fearsome giant with the strength of a thousand men. Not bad eh? 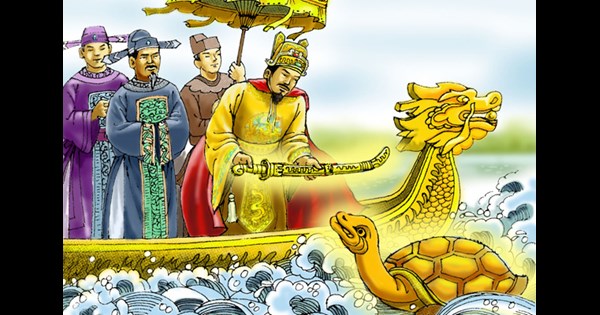 The Legend of The Golden Turtle.

However, that’s not the end of the story. Sometime later, Le Loi was out boating on the lake when he found himself confronted by The Golden Turtle God, Kim Quy. The turtle, who lived in the lake, had surfaced to reclaim the sword on behalf of The Dragon King. Le Loi handed it over with no objection and the lake became known as Hoan Kiem, which means Lake of the Returning Sword. 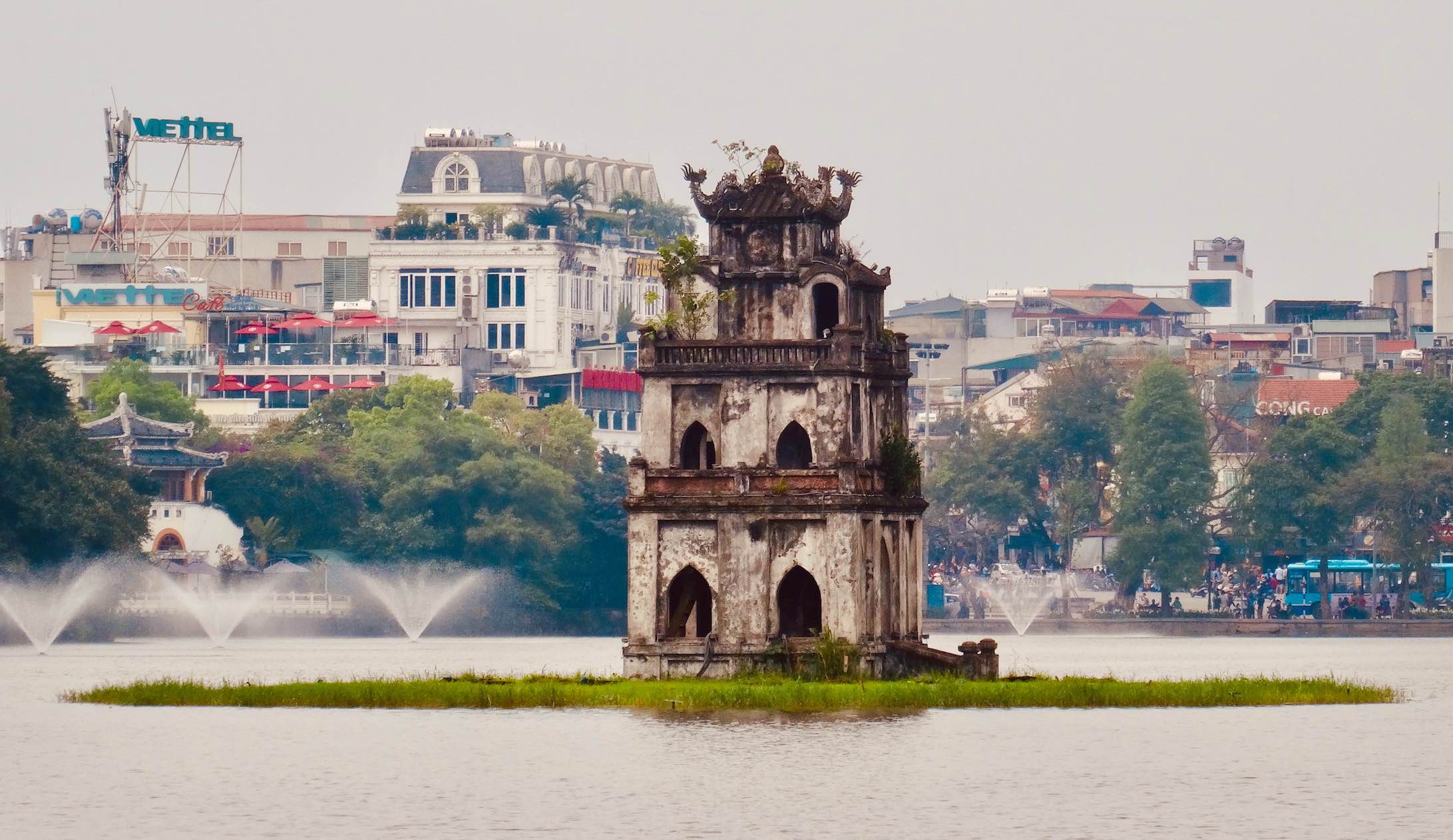 When you visit the lake, one of the first things you’ll see is Turtle Tower (Thap Ruá). It was constructed in 1886 to honour Le Loi, The Turtle God and Vietnam’s most cherished legend.

In the early twentieth century, city authorities began working with animal experts to introduce a number of rare giant turtles to the lake. Many of them would hang out at Turtle Tower to bask in the sun. Sadly, the last of those original turtles passed away in 2016 aged somewhere between 80 and 100 years old. 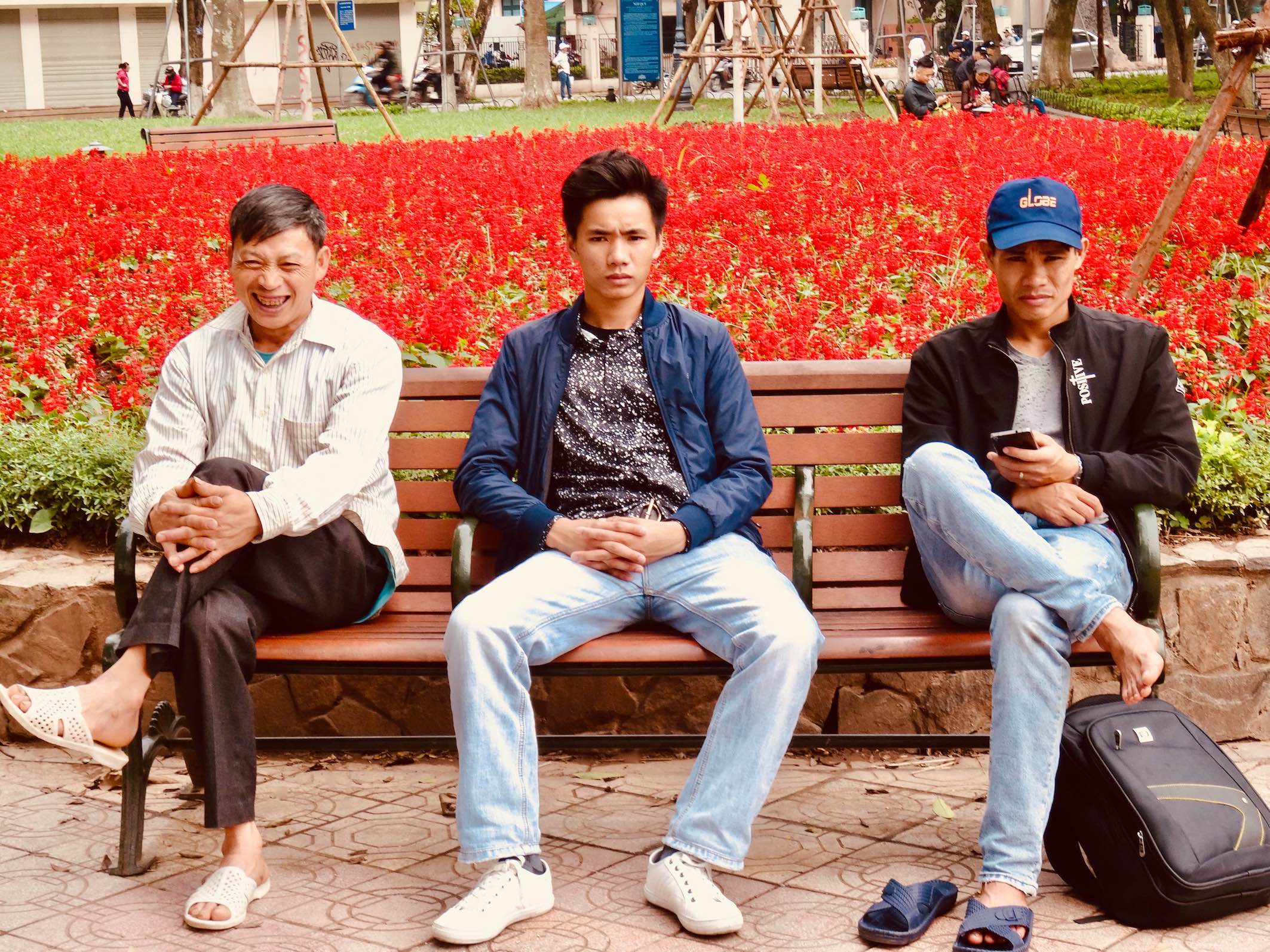 Working my way around the lake, I stopped here and there to photograph the locals. I tried to be as discreet as I could, though I clearly wasn’t quite as stealthy as I’d hoped. 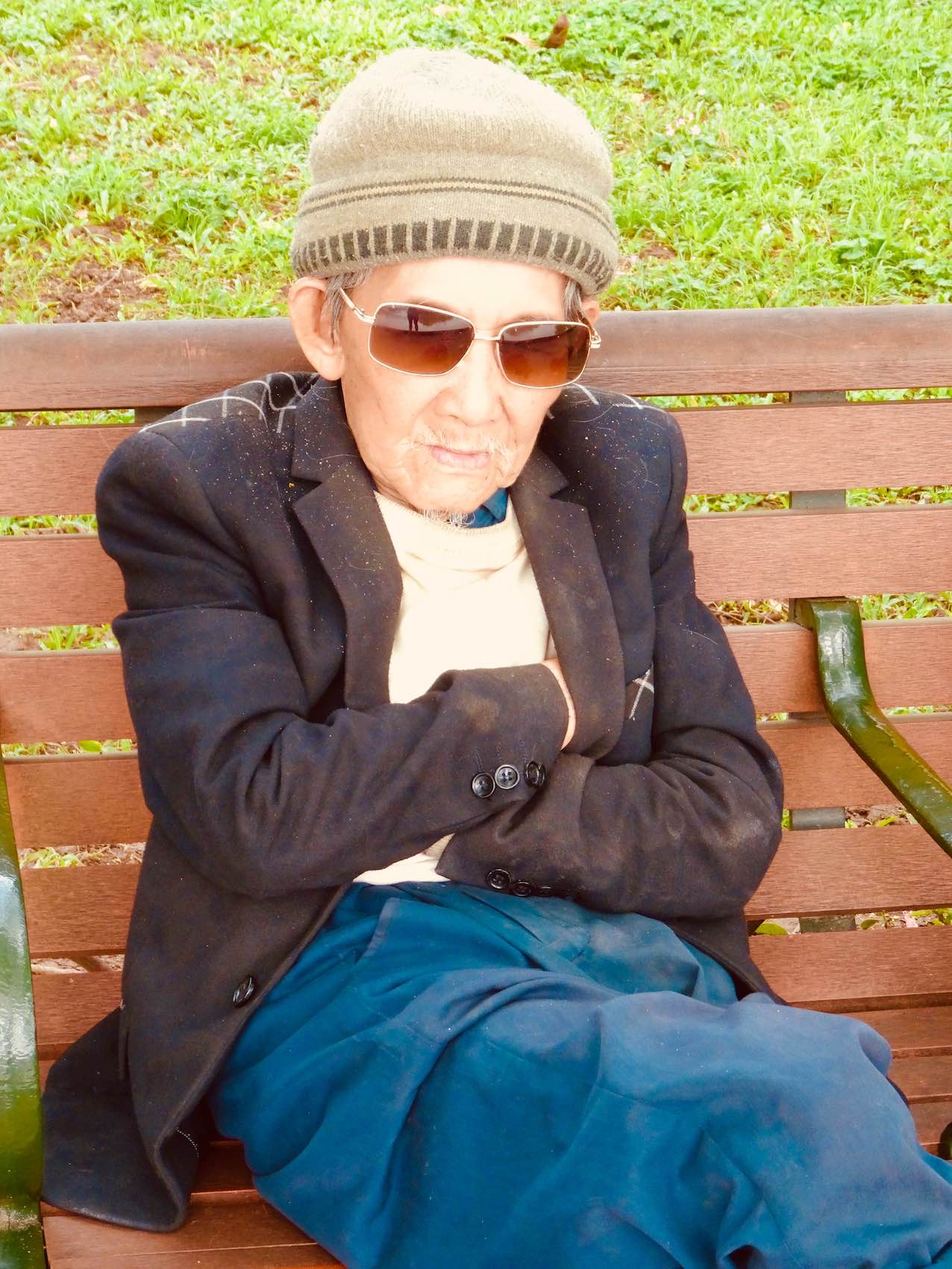 Nevertheless, I secured plenty of sittin’ doin’ nothin’ shots to add to my worldwide collection. Which was no surprise, as the lake has got to be Hanoi’s best spot for sitting, emptying one’s mind and doing nowt. 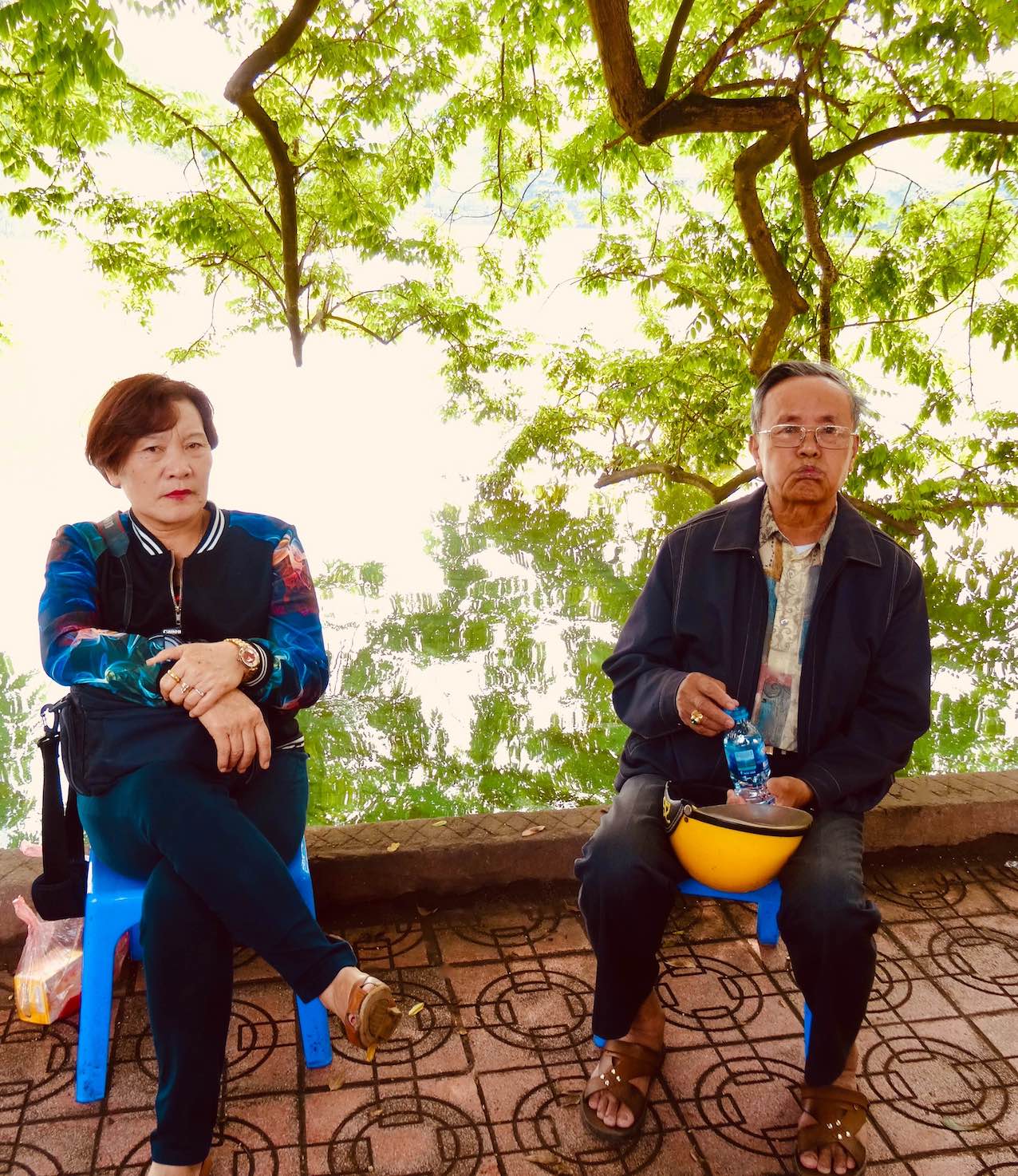 On the lake’s northern side, I paid a visit to Ngoc Son Temple (Temple of the Jade Mountain). Established in 1841 and dedicated to the Vietnamese royal prince Trần Hưng Đạo, this is Hanoi’s most visited temple. 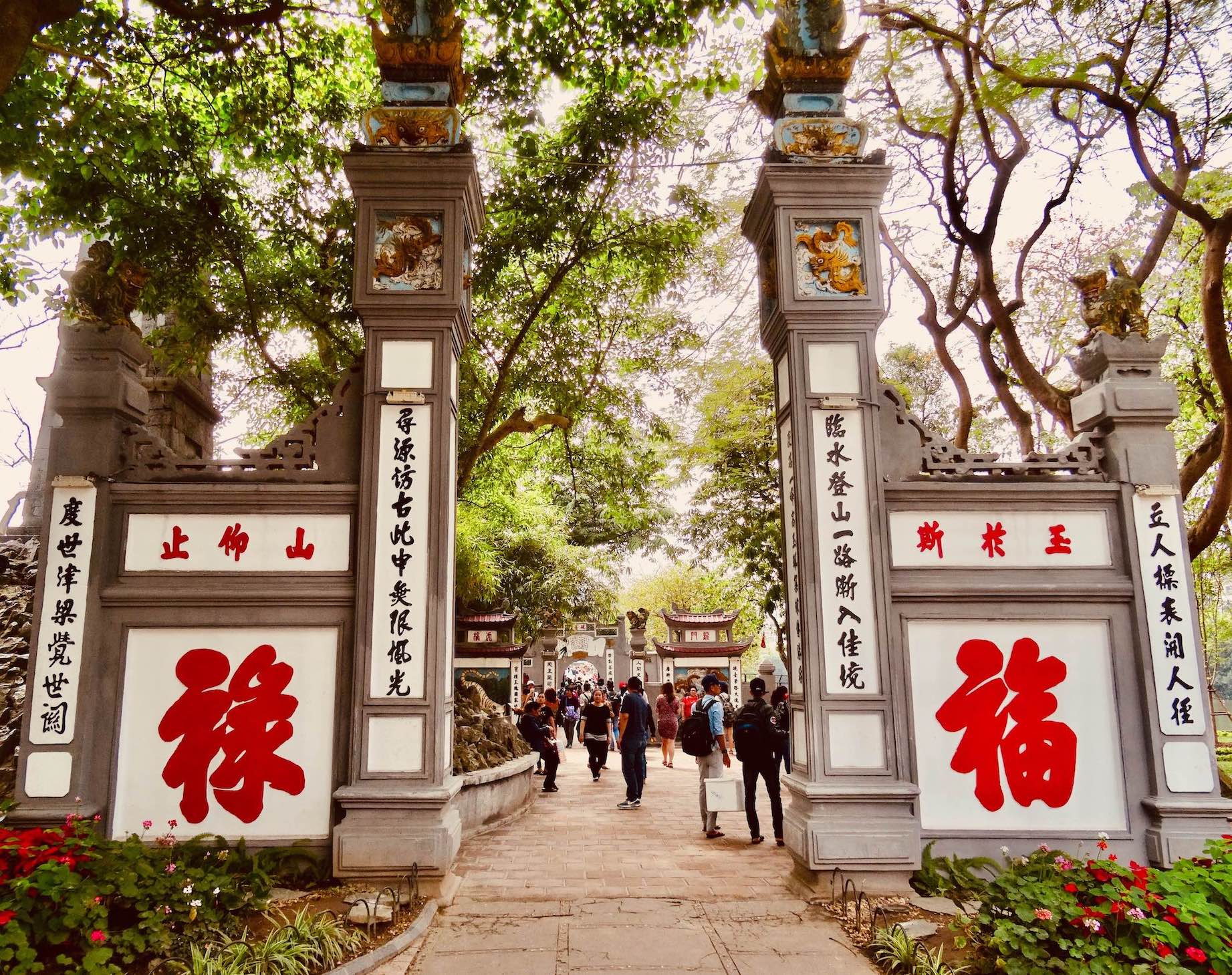 Inside there are several courtyards with a charming little shrine to the prince, who successfully led the Vietnamese in repelling two Mongol invasions in the 13th century. There are also shrines in honour of several Confucian and Taoist philosophers. 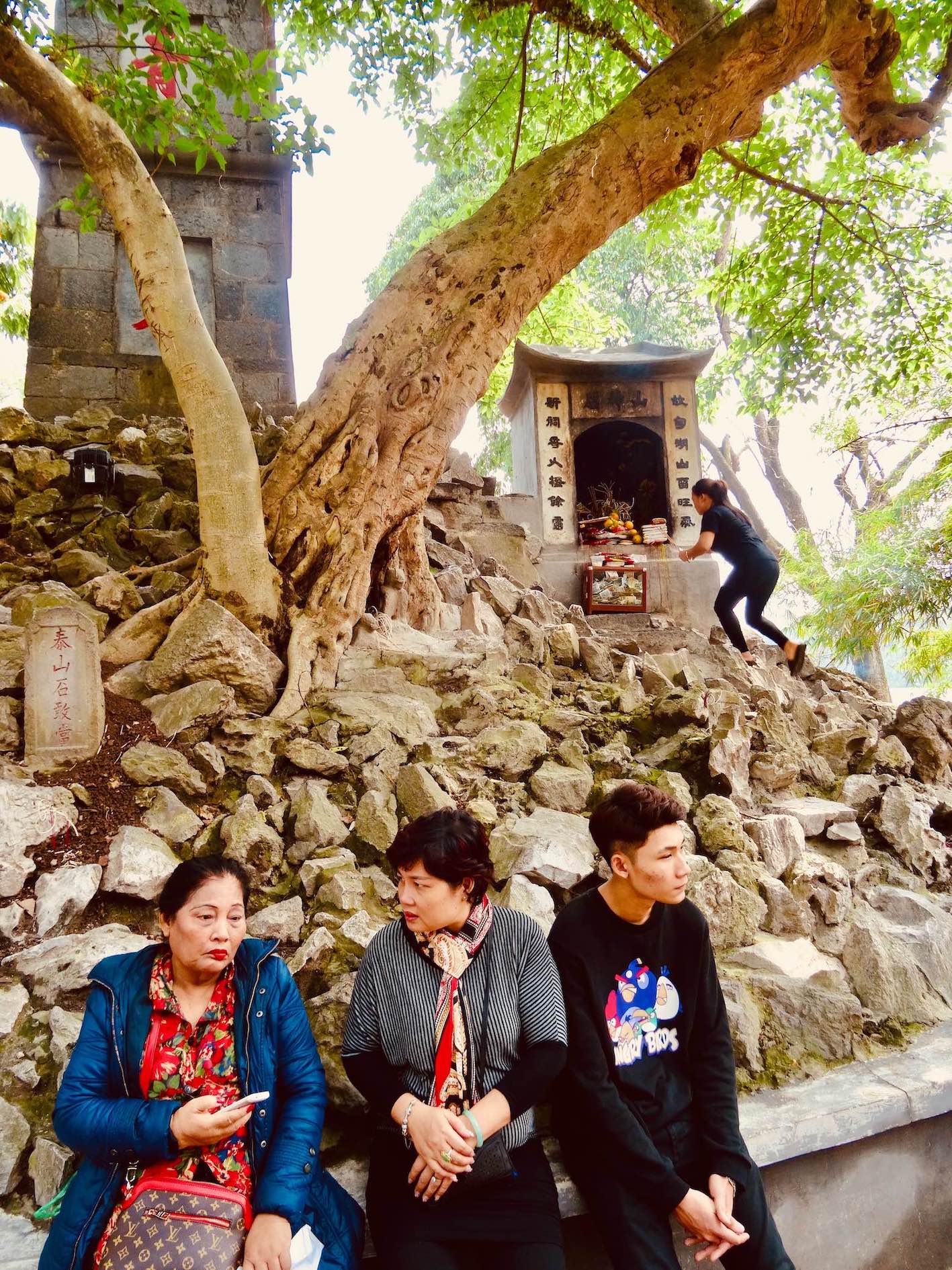 The temple’s main hall lies on a small islet on the lake itself. You access it via the scarlet red Huc Bridge (Welcome Morning Sunlight Bridge). Built in 1865, it faces east, making it a popular sunset spot. The bridge is really pretty but nearly always manic, with selfie-takers, unsupervised kids and aimless shufflers competing for elbow space. 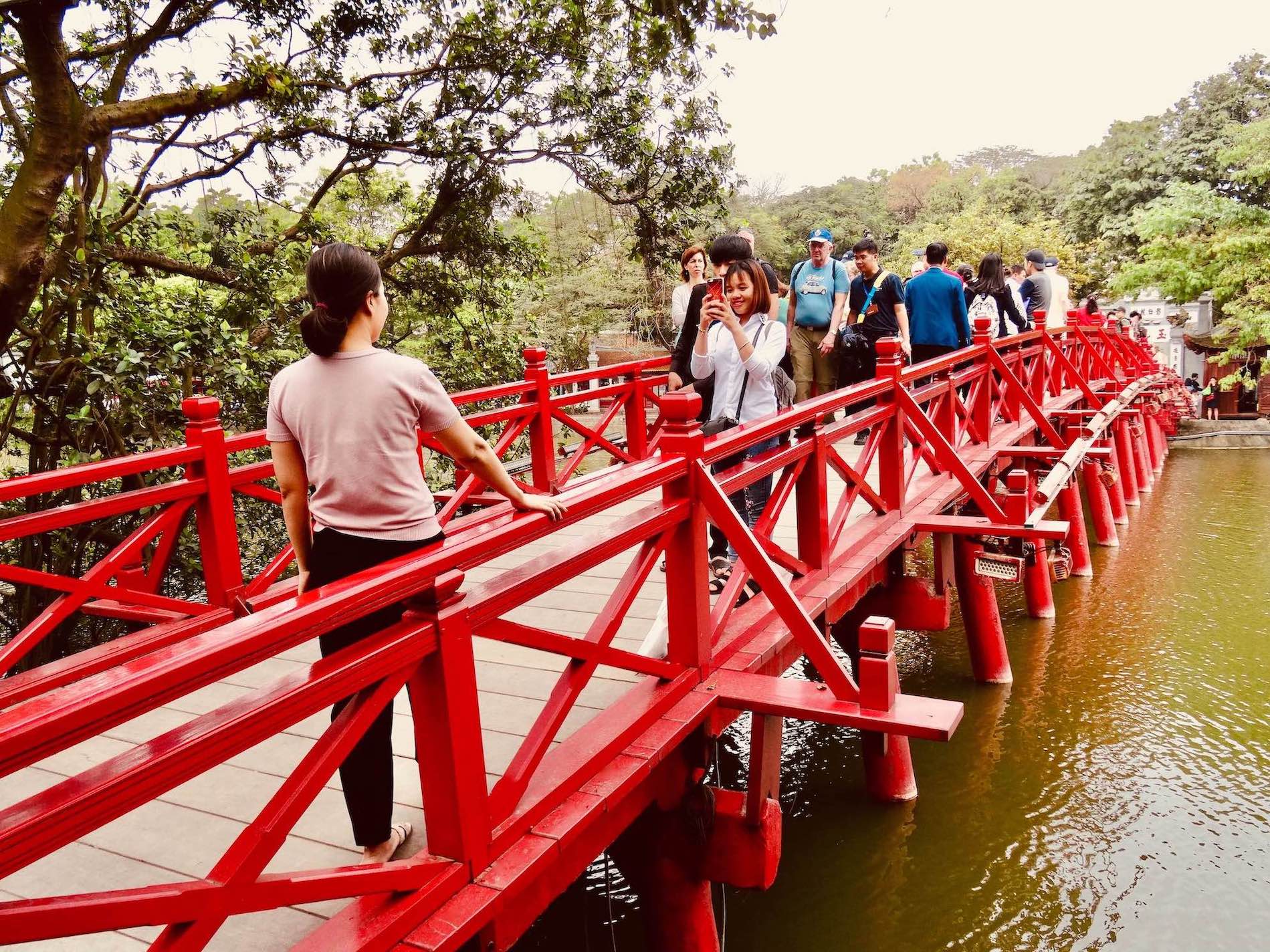 Thus I headed onto the main hall, a Taoist structure called Dac Nguyen Lau (Moon Reflection Pavilion). Here, I only managed a brief glimpse inside due to the steady stream of worshippers.

Still, it was cool to sit on the stone steps and admire the painted relief panels under the roof. Among the many images, I spotted the Turtle God carrying the legendary sword. And a number of curious lion-horse creatures, a symbol of loyalty, protection and power. 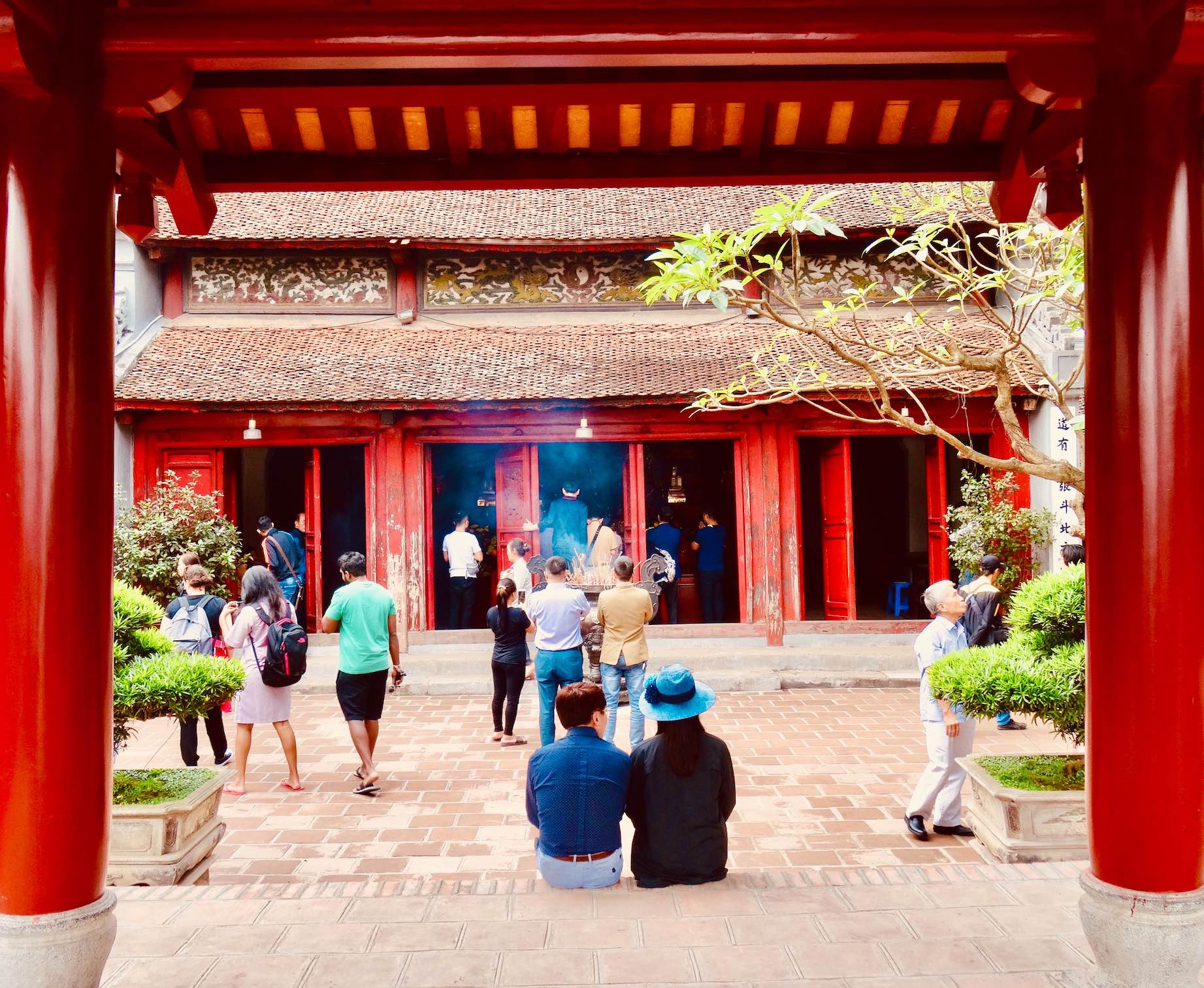 In the adjoining courtyard there are a scattering of incense burners that keep the air awash with pungent smoke. It’s also a nice spot from which to simply gaze out across the lake. 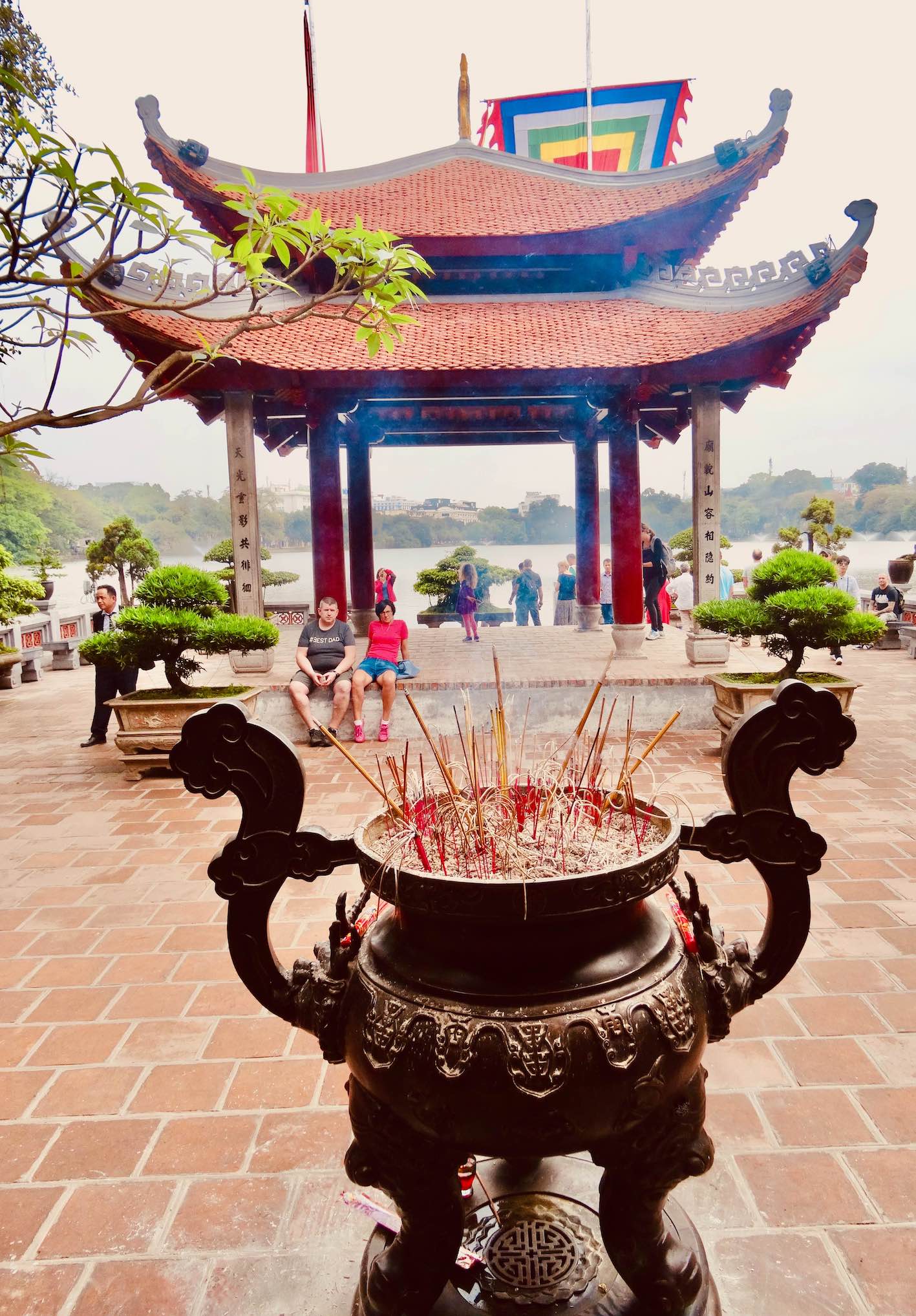 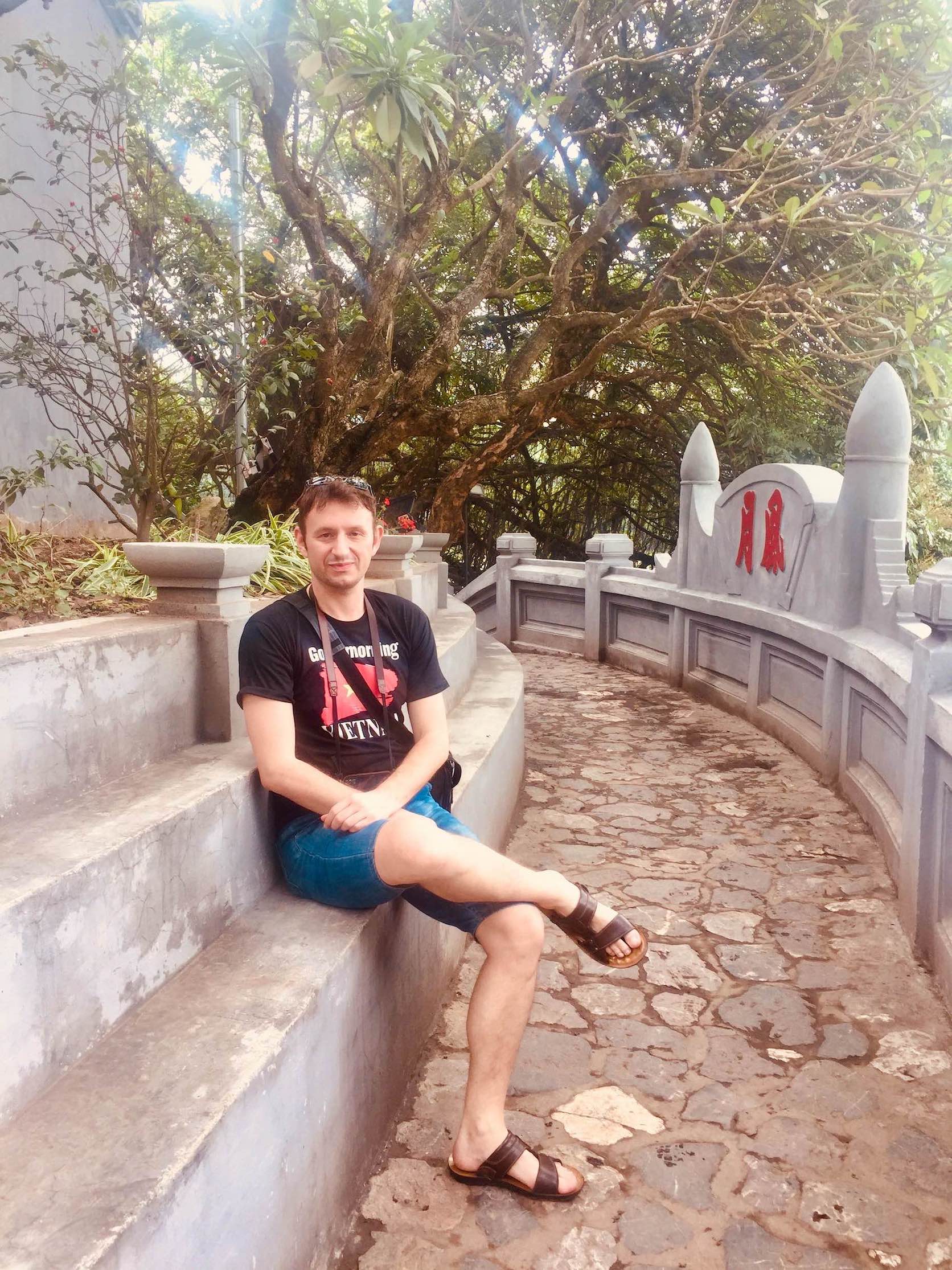 Temple of the Jade Mountain.

Finally, on the western side of the lake, in a small park, I stopped to check out the commanding Ly Thai To Monument. This Vietnamese monarch ruled between 1009 and 1028 and was the founder of the 200 year long Ly Dynasty. Unveiling Buddhism as the state religion, he set about establishing Thang Long as Vietnam’s capital. And so it remained for over 800 years, until it was renamed Hanoi in 1831. 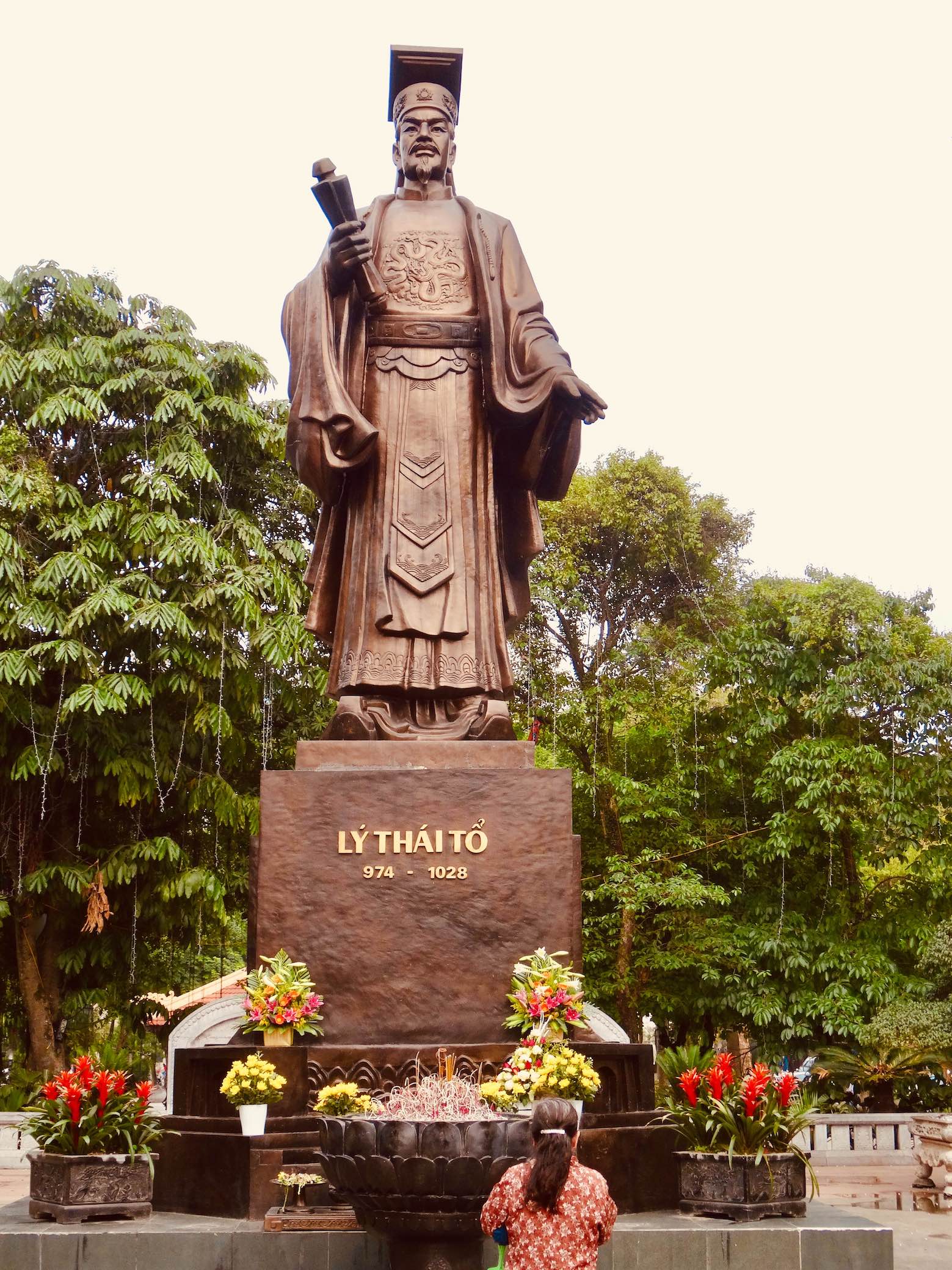 A statue fit for a king.