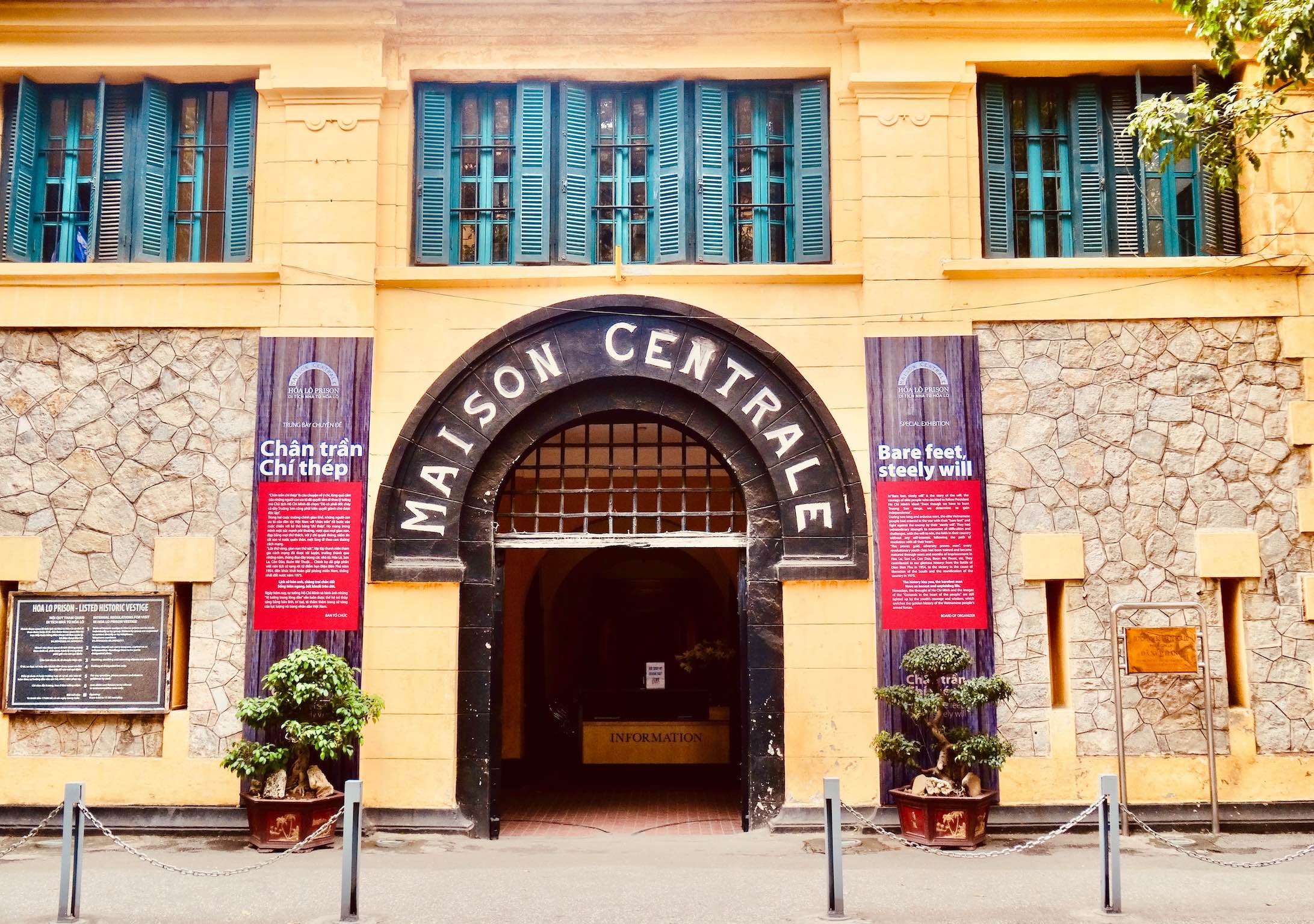 If you’re visiting Hanoi and have the means to treat yourself to a luxurious stay, one might consider the Hilton Hanoi Opera. I’m sure you can picture the place, without even looking. Rooms feature elegantly handcrafted traditional Vietnamese furniture. Moreover, there’s a giant swimming pool, a full range of spa facilities and a fancy French restaurant where the tables overlook Hanoi Opera House.

During my stay in the Vietnamese capital I got to visit The Hanoi Hilton, though it certainly wasn’t the hotel described above. In fact, this Hanoi Hilton was an exceptionally grim place officially known as Hoa Lo Prison. Nevertheless, it stands as an unmissable site for anyone keen to wade knee deep into an essential chapter of Vietnam’s modern history. 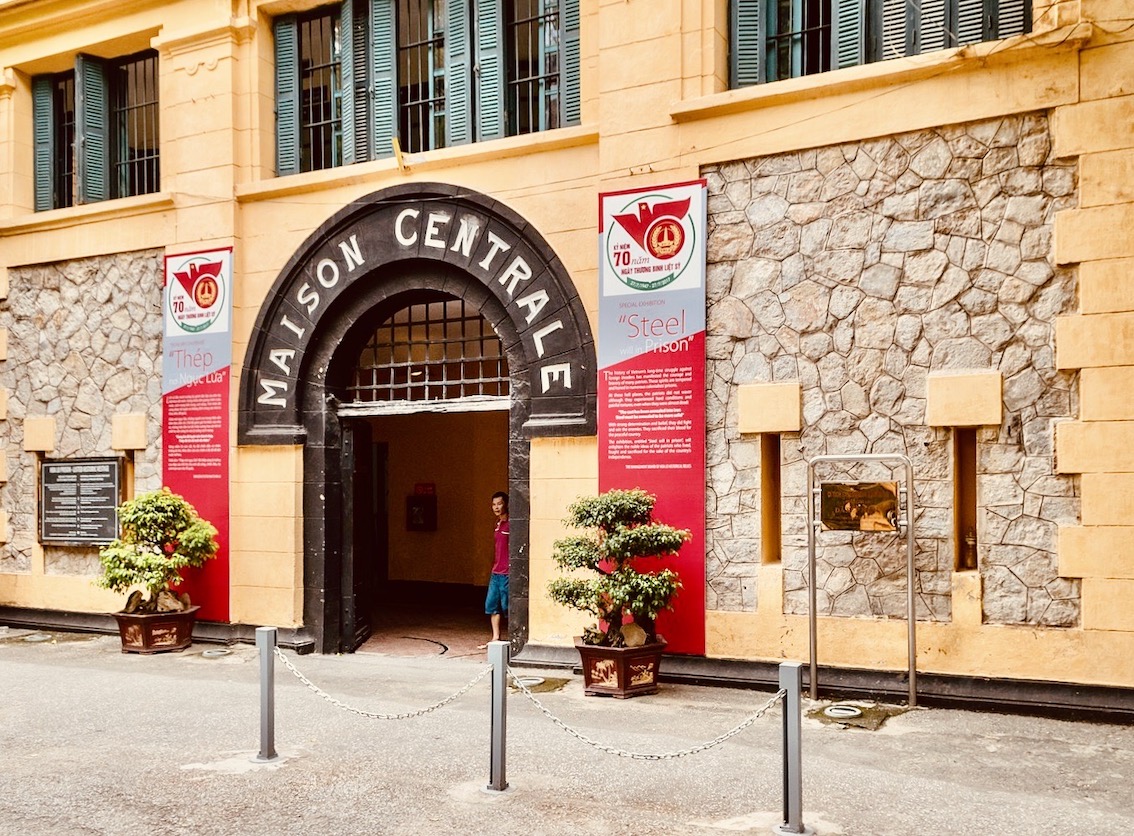 Hoa Lo Prison was a compound of many names. French colonialists built it in the late 1880s in order to silence Vietnamese revolutionaries seeking national independence. The French called the place Maison Centrale (Central House), a common term in France for maximum security detention centres.

The Vietnamese dubbed the prison Hỏa Lò, a term with multiple meanings. It works as a direct translation of the word stove, but can also be understood as fiery furnace or hellhole. Indeed the French built the complex on Hoa Lo Street, a long road packed with shops selling wood and coal fire stoves back in Hanoi’s pre-colonial days. 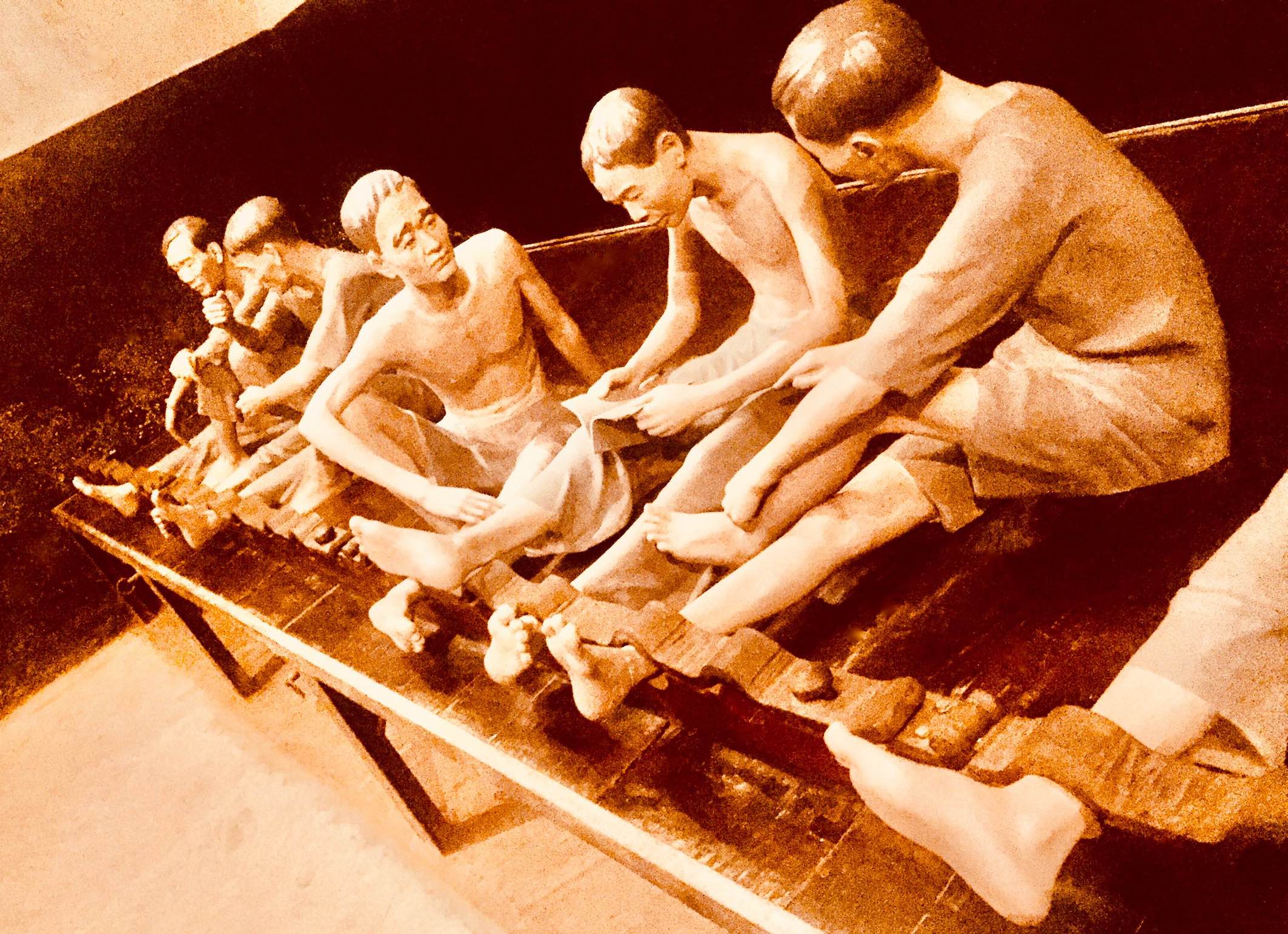 While city authorities demolished most of the prison in the 1990s, a few of the original cells still remain. Inside, I found bony, plastic sculpture prisoners shackled to iron bars.

The Vietnamese political prisoners held here suffered appalling conditions. And today’s museum definitely doesn’t shy away from those harsh realities. After much reflection, I’ve decided not to go into the grim details. Especially as much of the abuse is so similar to that documented in my article on Tuol Sleng Genocide Museum in Cambodia. 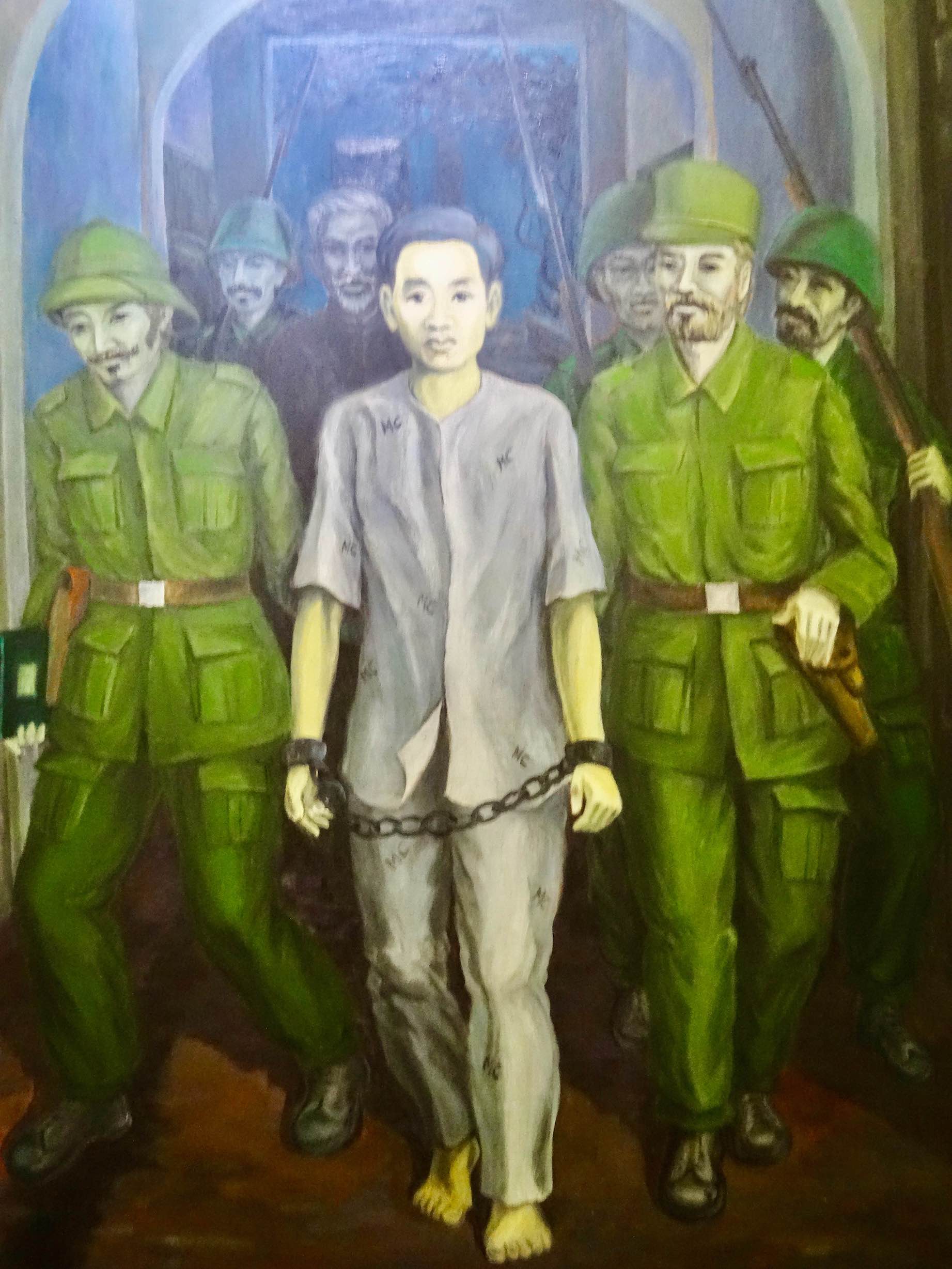 A number of haunting paintings hang in the dark, narrow corridors that connect the larger holding rooms to the solitary cells. One of these, pictured above, shows a prisoner being led away for execution in the stone courtyard outside. 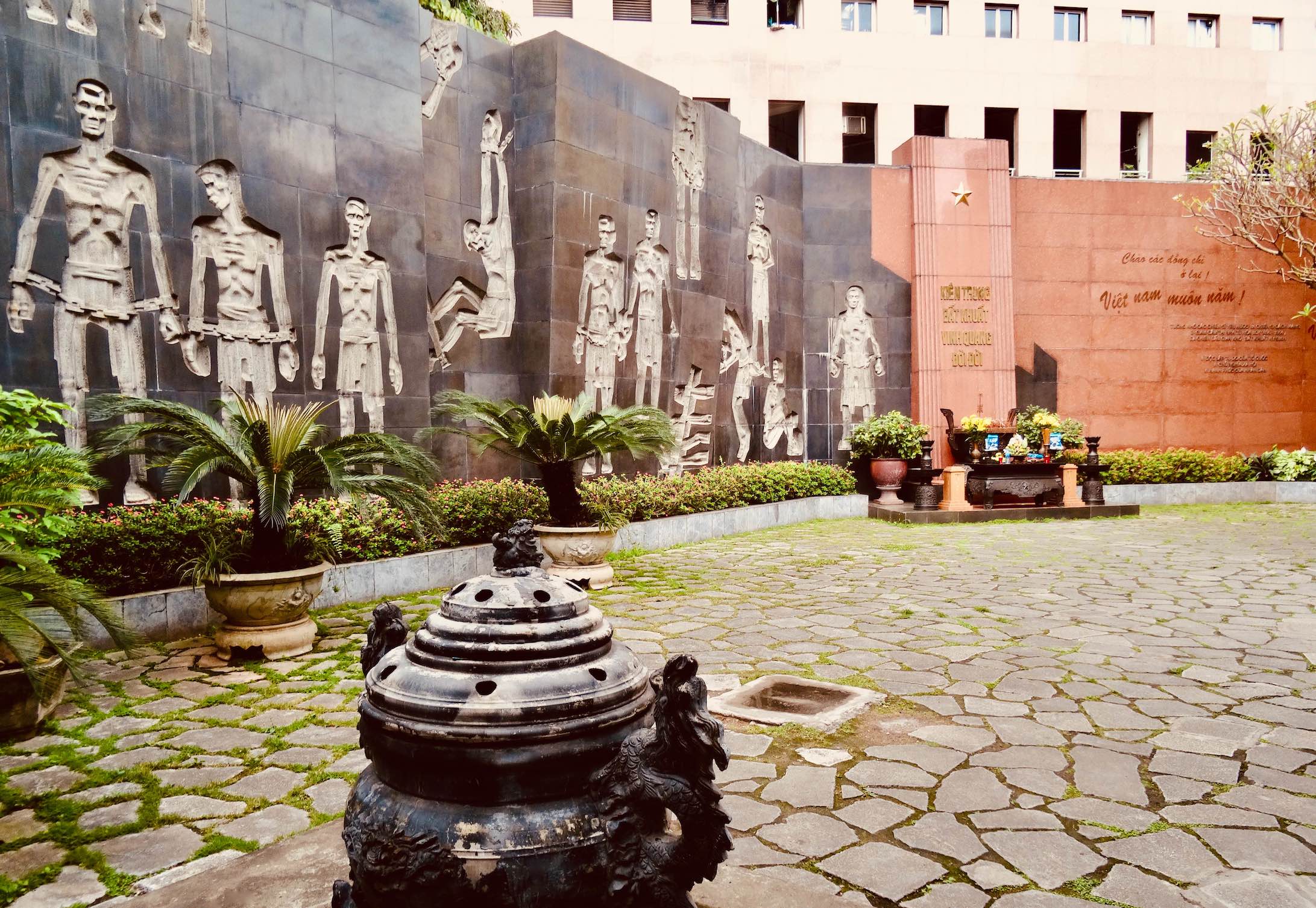 In said courtyard there are further depictions of prisoners carved into the compound wall. This is also where you’ll find the museum’s main memorial. In the 1930s Hoa Lo held up to 1400 people. This increased to over 2000 by the 1950s. Despite the awful conditions and regular executions, an unbreakable defiance shone bright among many of the inmates.

Somehow, right under the noses of the guards, they managed to read smuggled revolutionary texts and plan future uprisings. Several prisoners even went on to reach high ranking positions in the Vietnamese Communist Party. 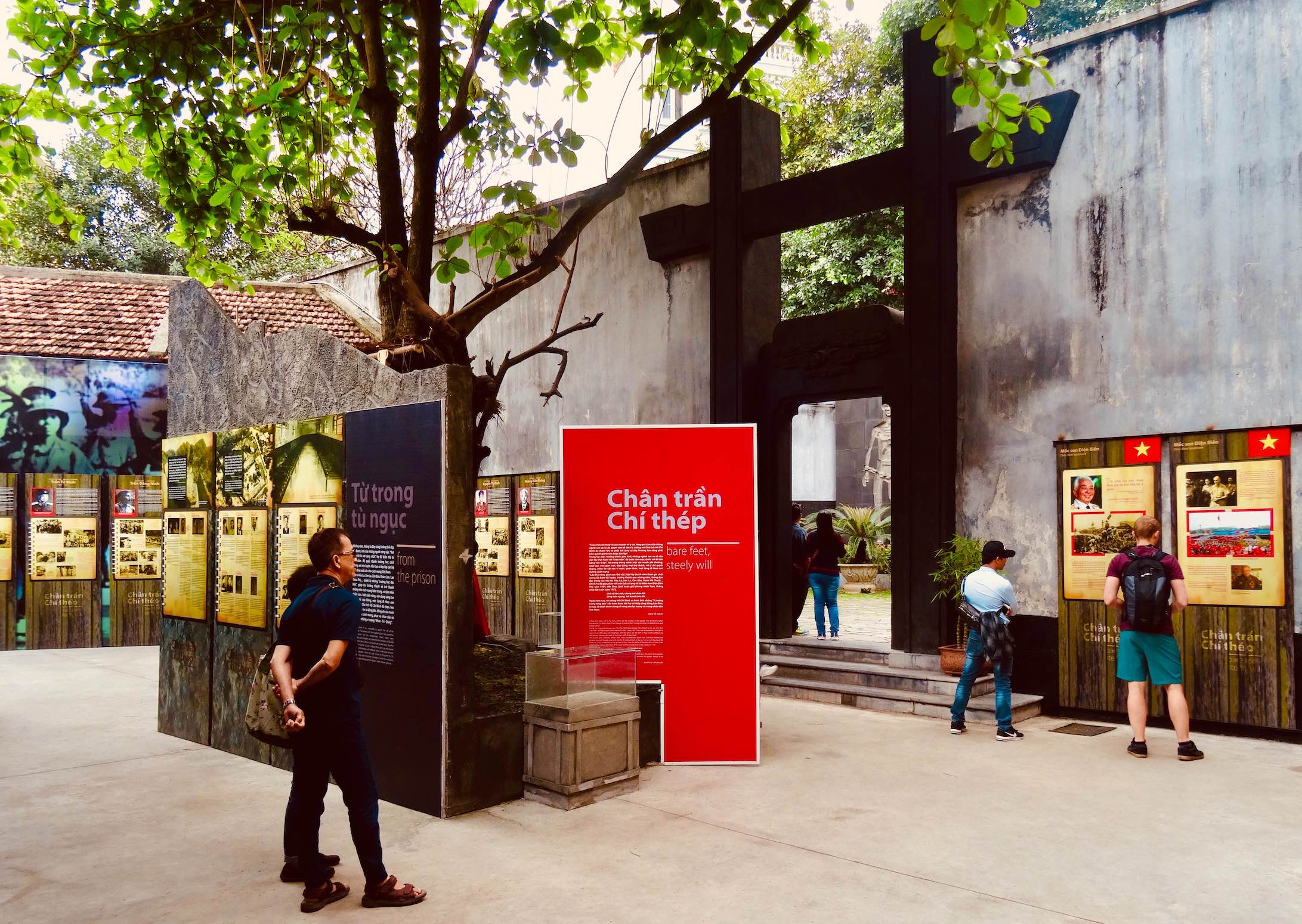 In another courtyard, a newly opened exhibition led me deep into the narrative of The Vietnamese Resistance. Titled Bare Feet, Steely Will, its photo boards highlight the key events on the road to independence. It also features over 250 war mementos from Vietnamese veterans, as well as character profiles on the country’s most celebrated “resistance heroes”. 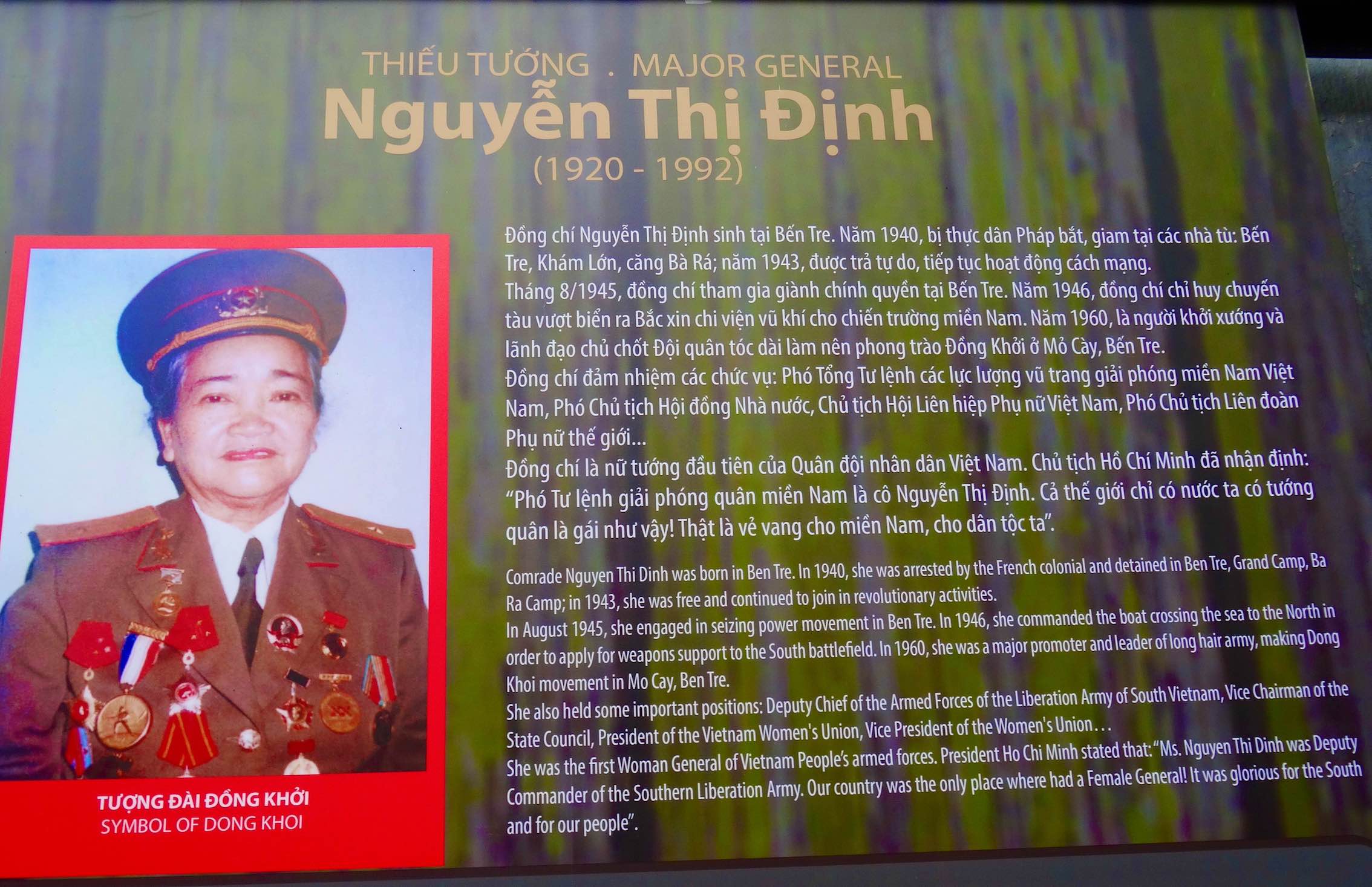 Take Nguyen Thi Dinh, for example, the Vietnam People’s Army’s first ever female general. Born into a peasant family in Ben Tre Province, she became a skilled soldier from a young age.

In the 1940s she fought with The Viet Minh against the French and spent years in various French prisons. Later, in the 1960s, she became a founding member of The National Liberation Front. And led the so-called Long Hair Warriors as the chairwoman of the South Vietnam Women’s Liberation Association. 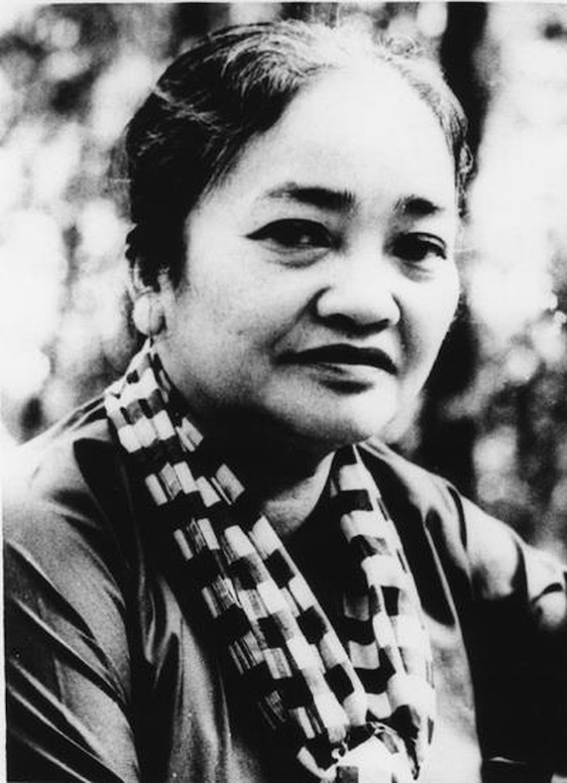 In her later years she served on the central committee of the Vietnamese Communist Party. In 1976 Cornell University published her memoirs, No Other Road to Take. She was also the recipient of the Lenin Peace Prize. And, following her death, crowned a Hero of the People’s Armed Forces. Talk about a life lived. 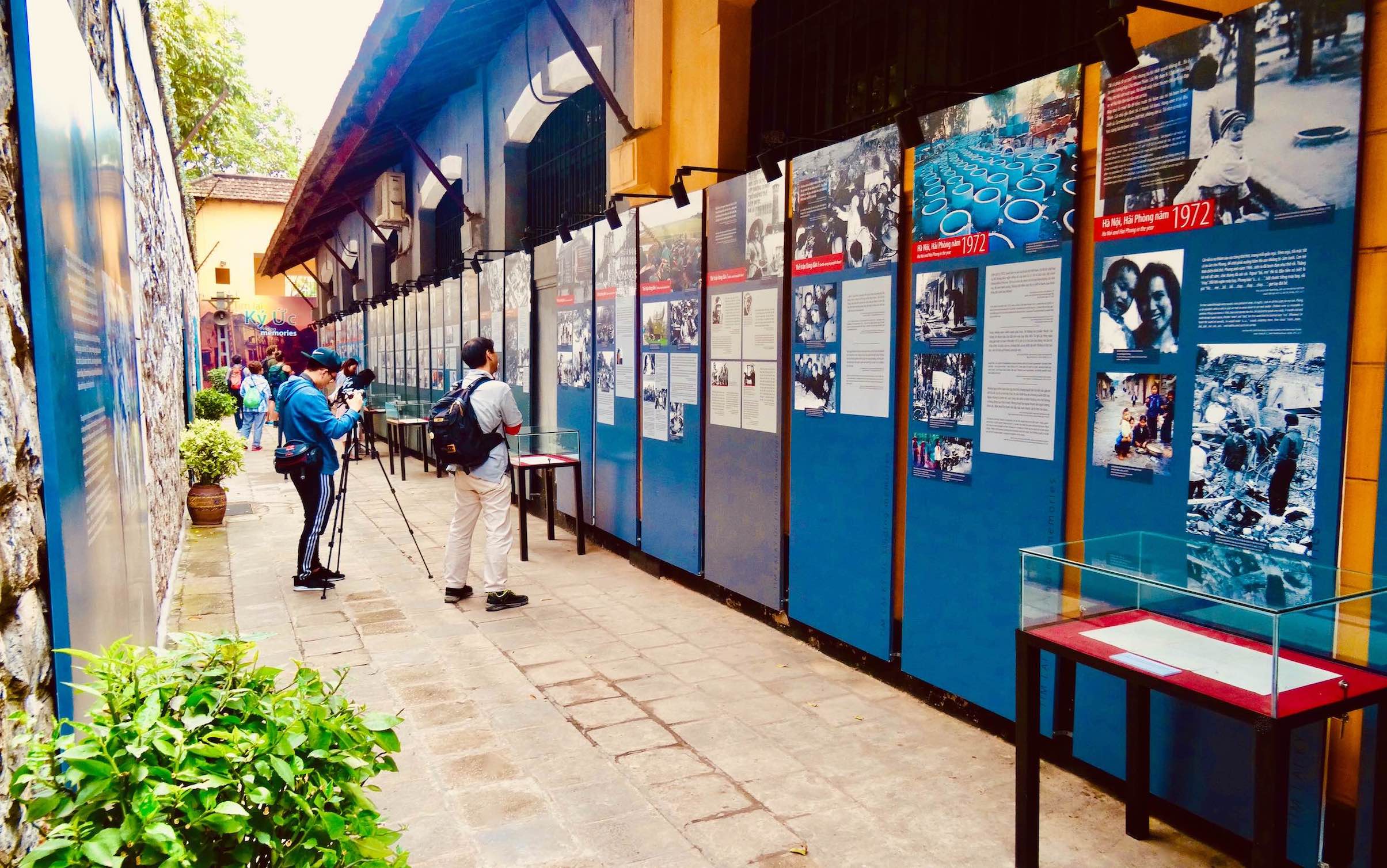 A long alleyway in the heart of the museum provides a complete overview of the prison’s history. After Vietnam gained independence the government transformed the compound into an exhibition and education centre focused on the revolution. But in the mid 1960s it became a prison once more during The Vietnam War. 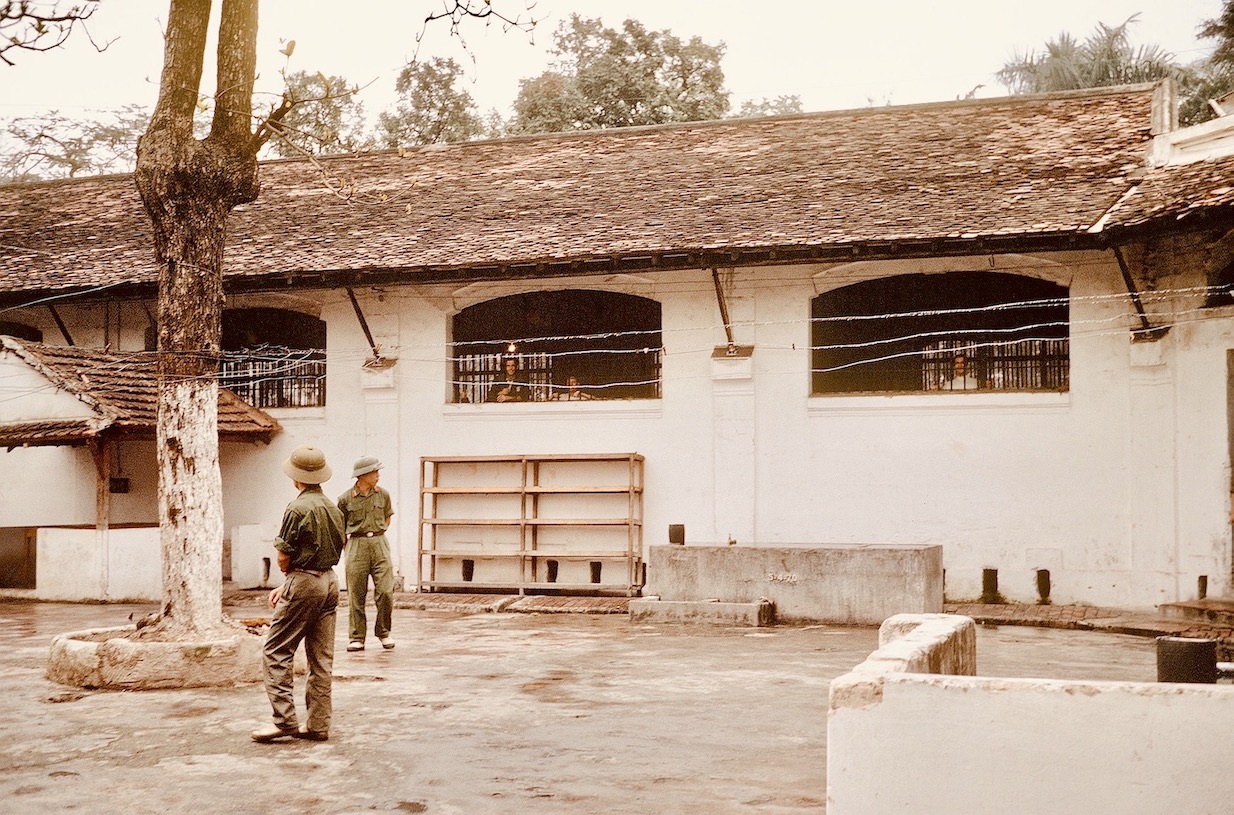 In fact, the North Vietnamese government believed Hoa Lo would be the perfect place to incarcerate captured American pilots. According to museum records, the first to arrive was Lieutenant Everett Alvarez Jr after he was shot down in 1964. The poor guy ended up giving eight years and seven months of his life to Hoa Lo. This made him one of the longest serving POWs in U.S. military history. 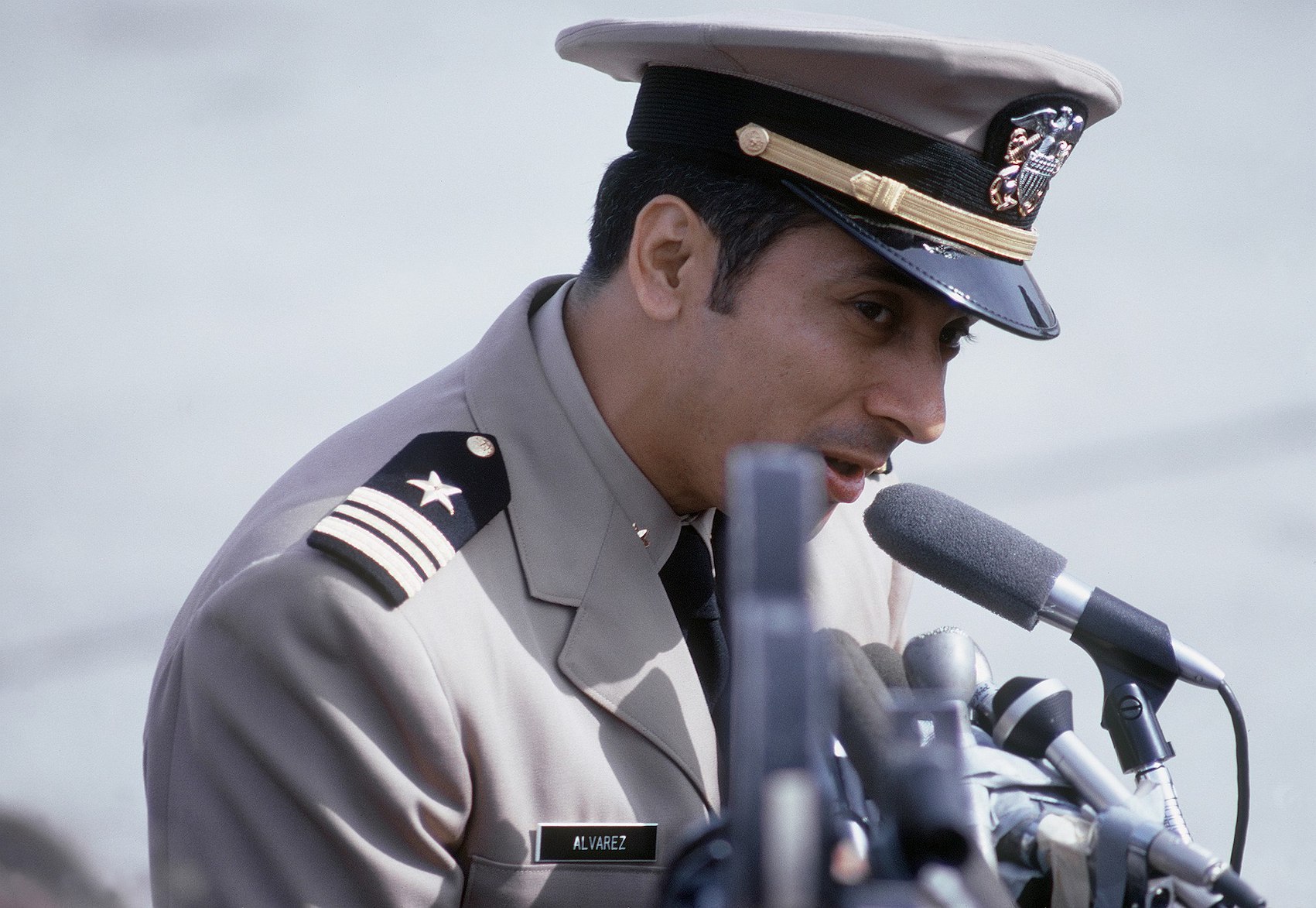 Life at the prison was famously terrible. The guards routinely beat and tortured inmates, while many pilots got sick from unsanitary water and rotten food.

Soon enough they began calling it The Hanoi Hilton, a term reportedly coined by the pilot Bob Shumaker. As the story goes, he carved the name into the handle of a bucket and used to swing it back and forth while greeting new arrivals. 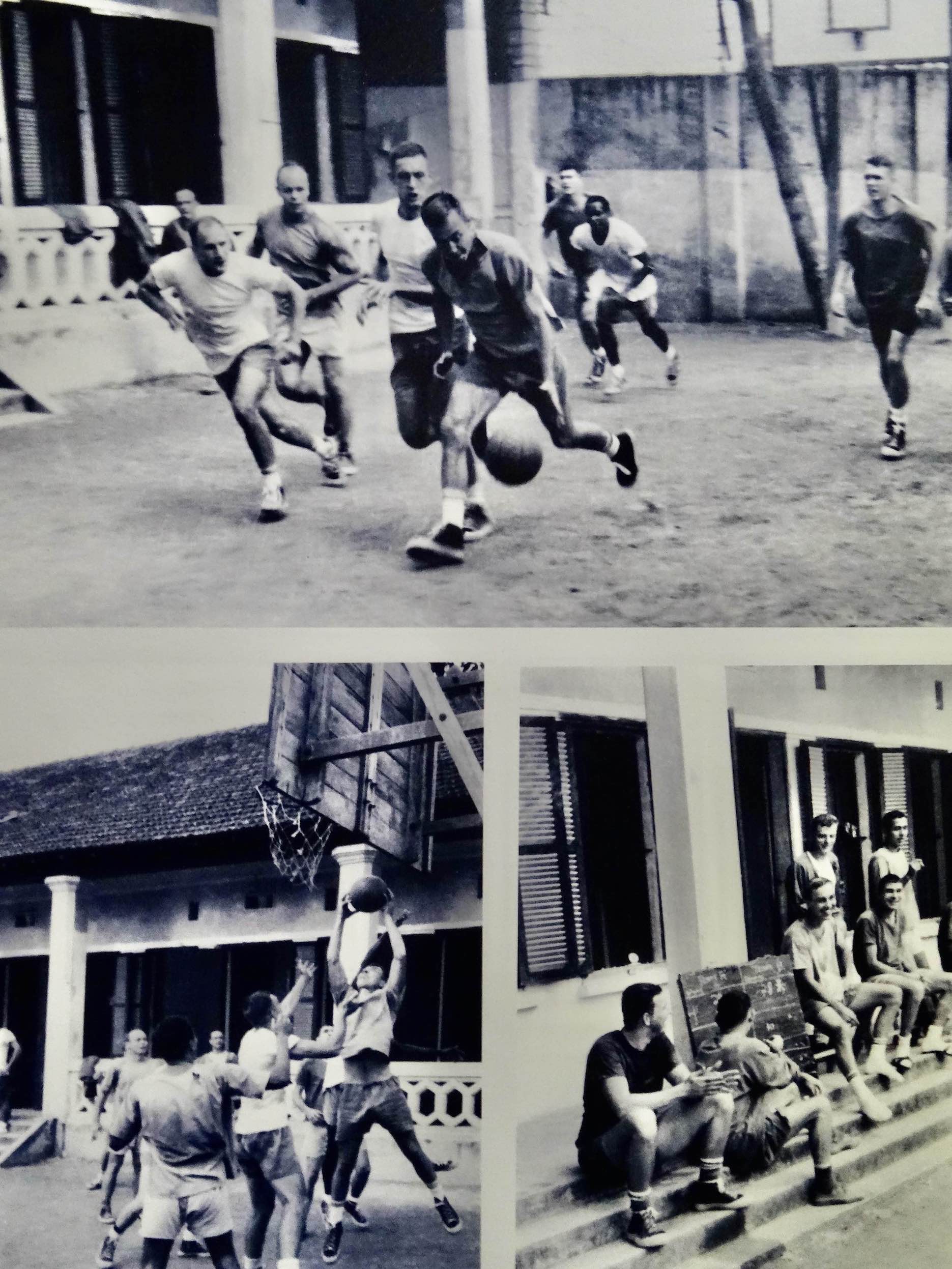 Having a blast at The Hanoi Hilton.

Amusingly, the museum goes out of its way to paint a rosy picture of prison life. There’s a whole section dedicated to how the pilots were treated with “the utmost respect“. And how they had all kinds of facilities and activities to make them comfortable. Don’t believe it? Just look at these guys playing baseball, soccer and hanging out on the barracks’ steps with broad smiles on their faces. 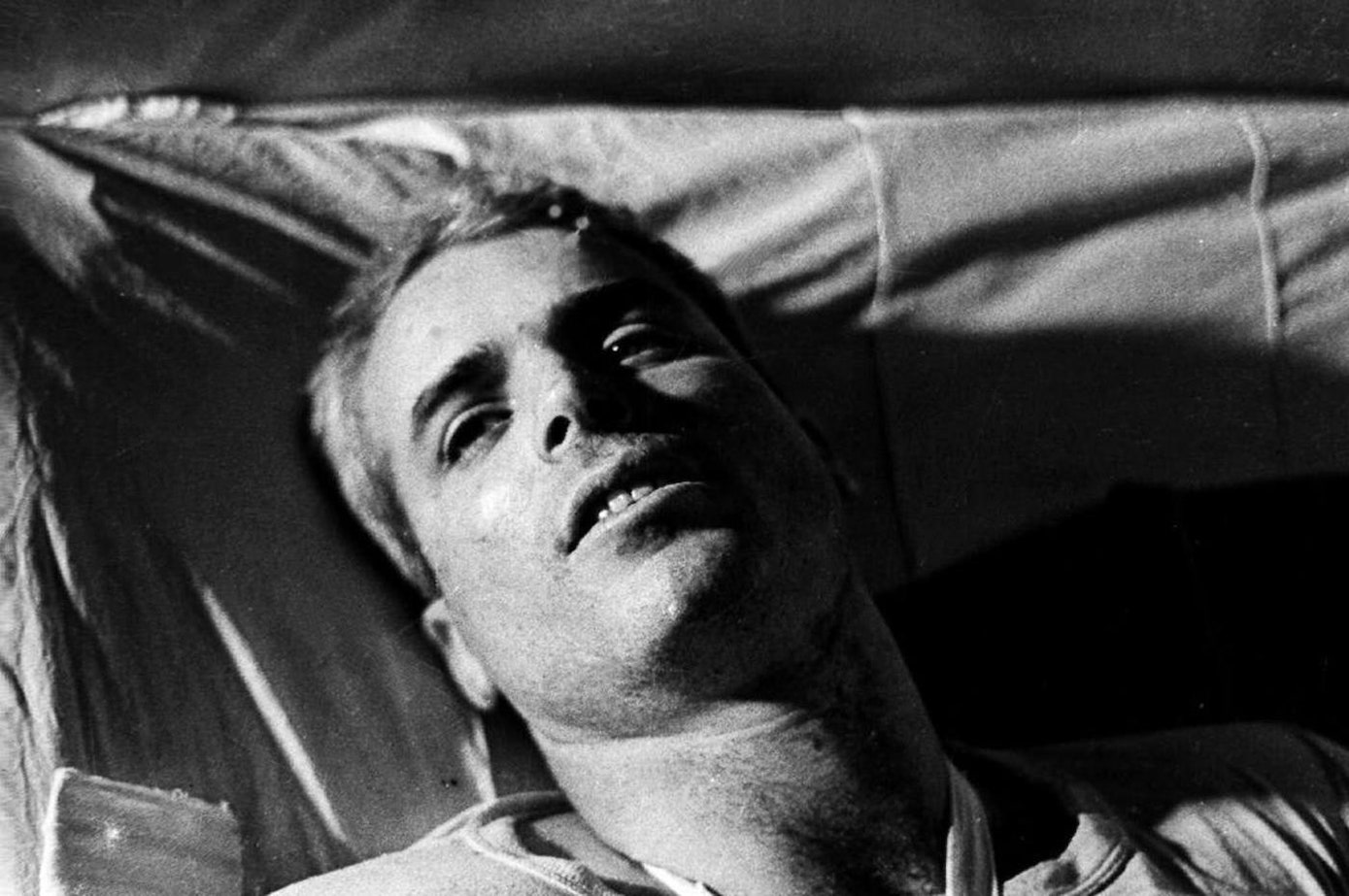 Hoa Loa’s most famous inmate was an American pilot by the name of John McCain. The man who would eventually run against Barack Obama in the 2008 U.S. Presidential Election arrived at The Hanoi Hilton on October the 26th 1967.

It was a miracle he even made it through the entrance gate. Having parachuted into Hanoi’s Truc Bach Lake, McCain arrived at Hoa Lo with fractured arms, a broken leg and crushed shoulders. To begin with prison guards refused to treat him. But then someone discovered that his father was a hugely respected admiral. Suddenly, he was off to hospital for six weeks of (substandard) treatment. In that time his hair turned white and he lost around 23 kilos. 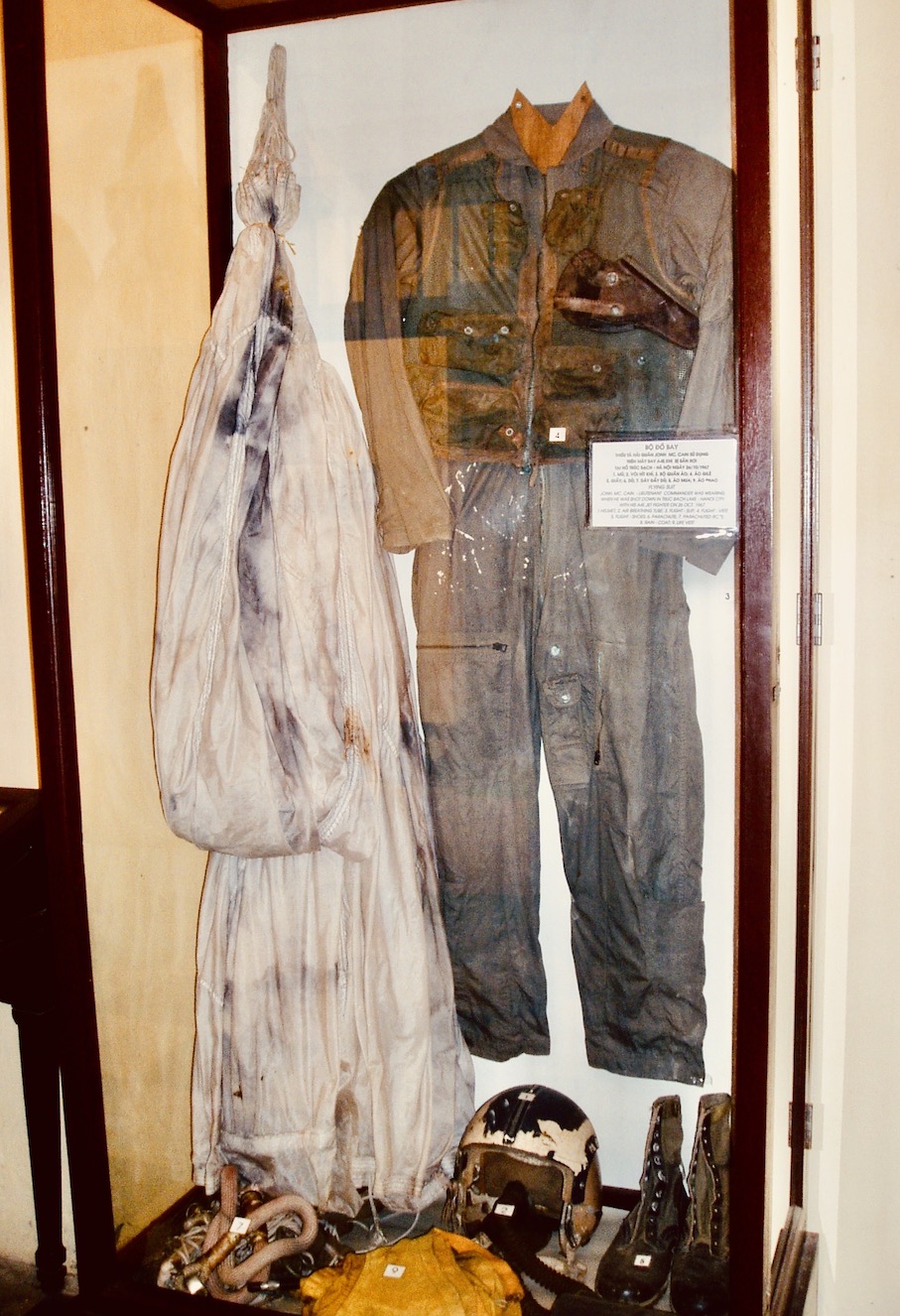 Fascinatingly, the museum showcases McCain’s original flight suit, parachute, helmet, boots and other personal possessions. Once he was back to something resembling good health, McCain found himself transferred to another Hanoi prison where he served two years in solitary confinement!

You would forgive him for never wanting to come back to Hanoi. And yet, John returned to Hoa Lo several times as a U.S. senator pushing for improved political ties between Vietnam and The U.S. 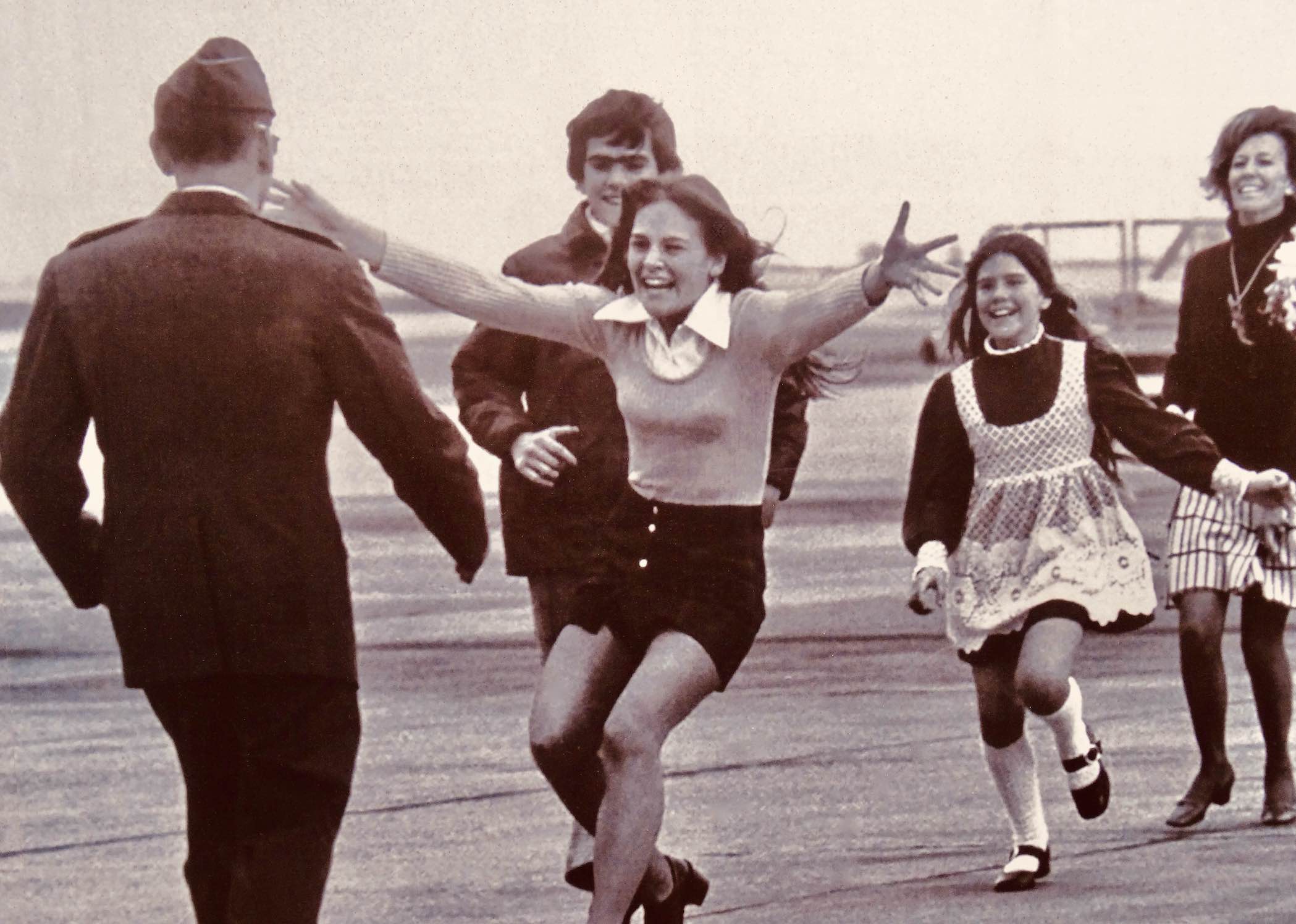 A former Hanoi Hilton resident reunites with his family in The U.S.

I came across some really curious items during my wanderings around the museum. I’ll sign this piece off with my favourite, a translated handwritten copy of President Ho Chi Minh’s 1969 New Year’s Message. Scrawled by an anonymous pilot, it reads:

Last year was full of glorious victories. This year the forefront’s sure to win still bigger ones. For independence, for freedom. Let’s fight so the yanks quit and the puppets topple. Forward! Fighters, countrymen! North and south reunited, could there be happier spring! 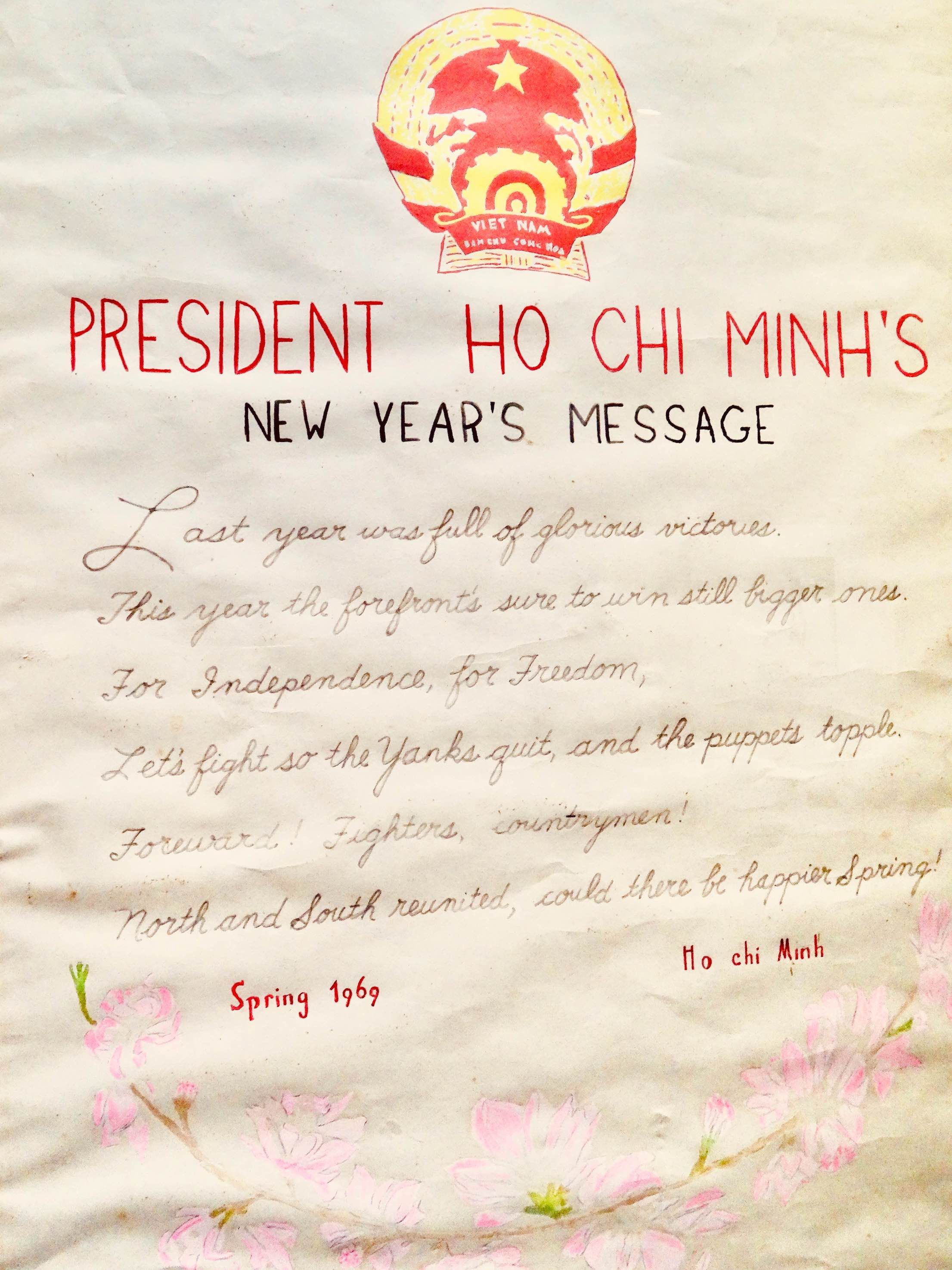