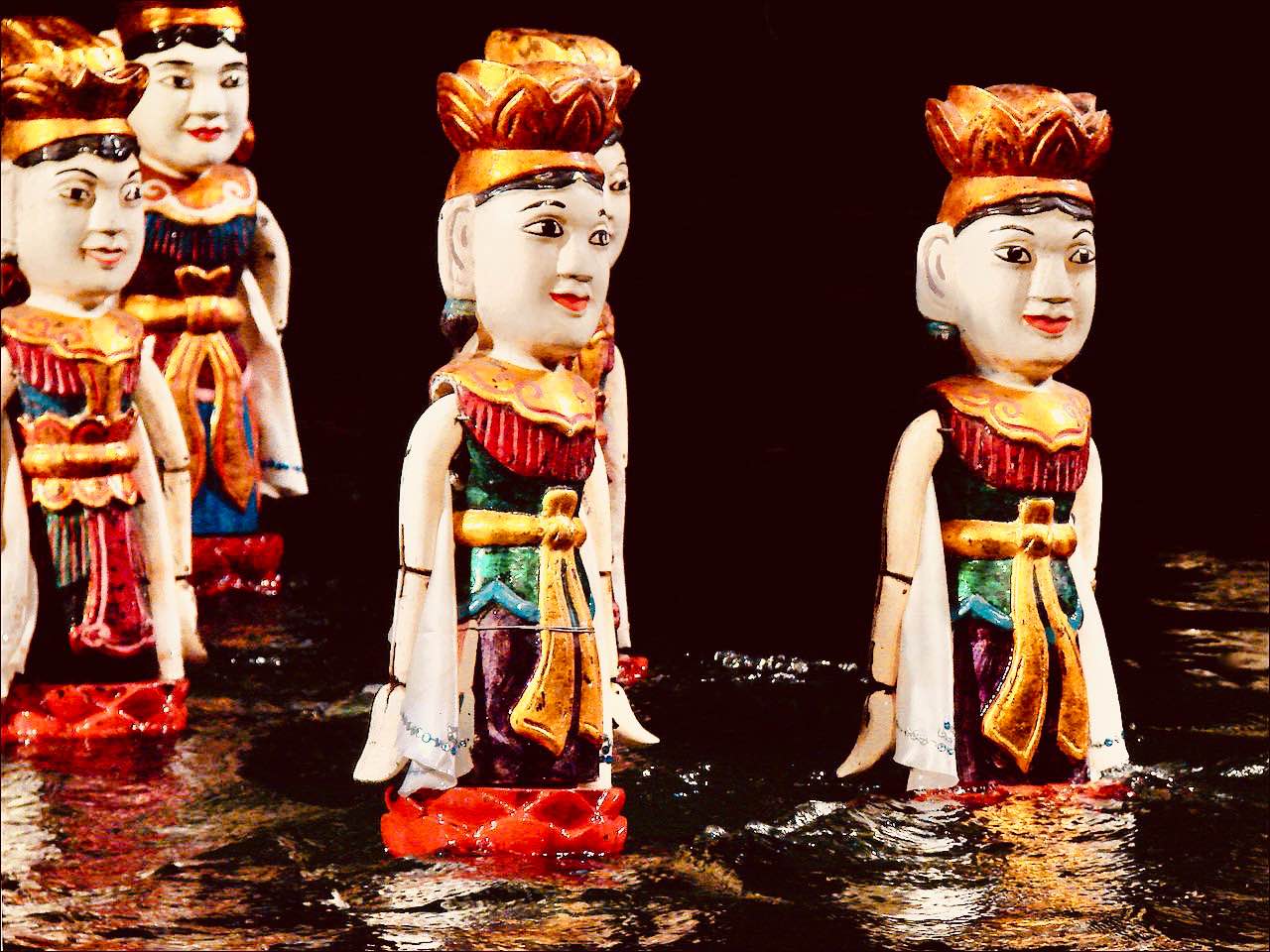 I’d never seen a water puppet performance before. In fact, I hadn’t been aware it was even a thing until I started planning my trip to Vietnam. The more I read, the more I realised seeing a water puppet show would be an unmissable experience during my travels around the country.

They say the art of Vietnamese water puppetry dates back to the 11th century. Known as Mua Roi Nuoc, historians have traced the unusual performance back to the Red River Delta villages of Vietnam’s rural north. Literally, we’re talking about dirt poor farmers splashing around in their rice paddies with handmade puppets. Apparently they believed such performances kept evil spirits away from their crops. Really, you couldn’t make it up. 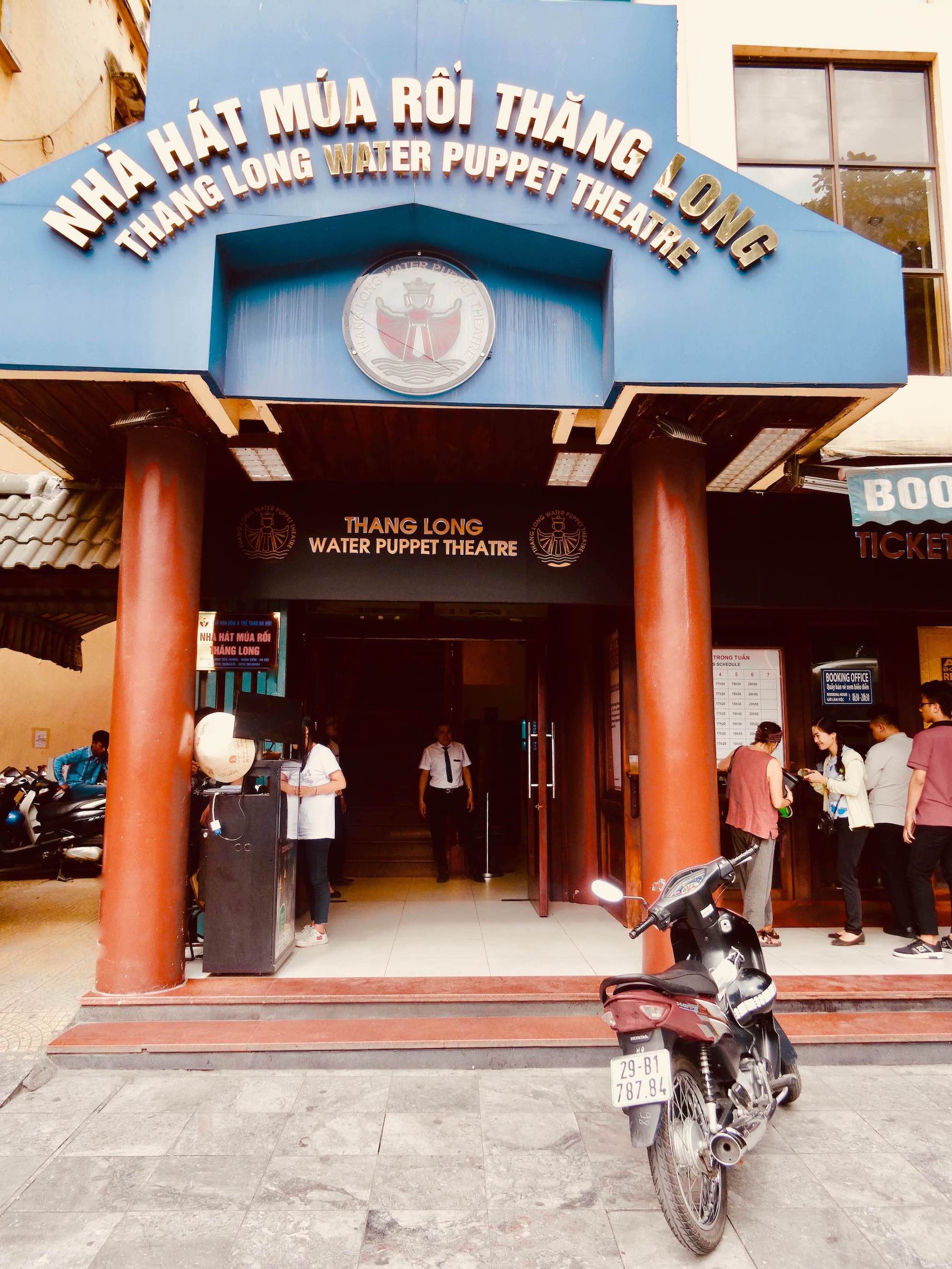 Today water puppetry lives on in a number of high profile theatres across the country. One of the most prestigious groups plies their trade in Hanoi at the respected Thang Long Water Puppet Theatre. It stands right in the heart of town on the northeastern bank of Hoan Kiem Lake.

Back in 2018 the theatre had performances running all day between 08:00-18:00, seven days a week. Thus you could turn up at your leisure, grab a ticket and be in your seat within the hour. And that’s just what I did one afternoon, quite spontaneously. Mainly in order to rest my weary feet and escape the sapping heat. 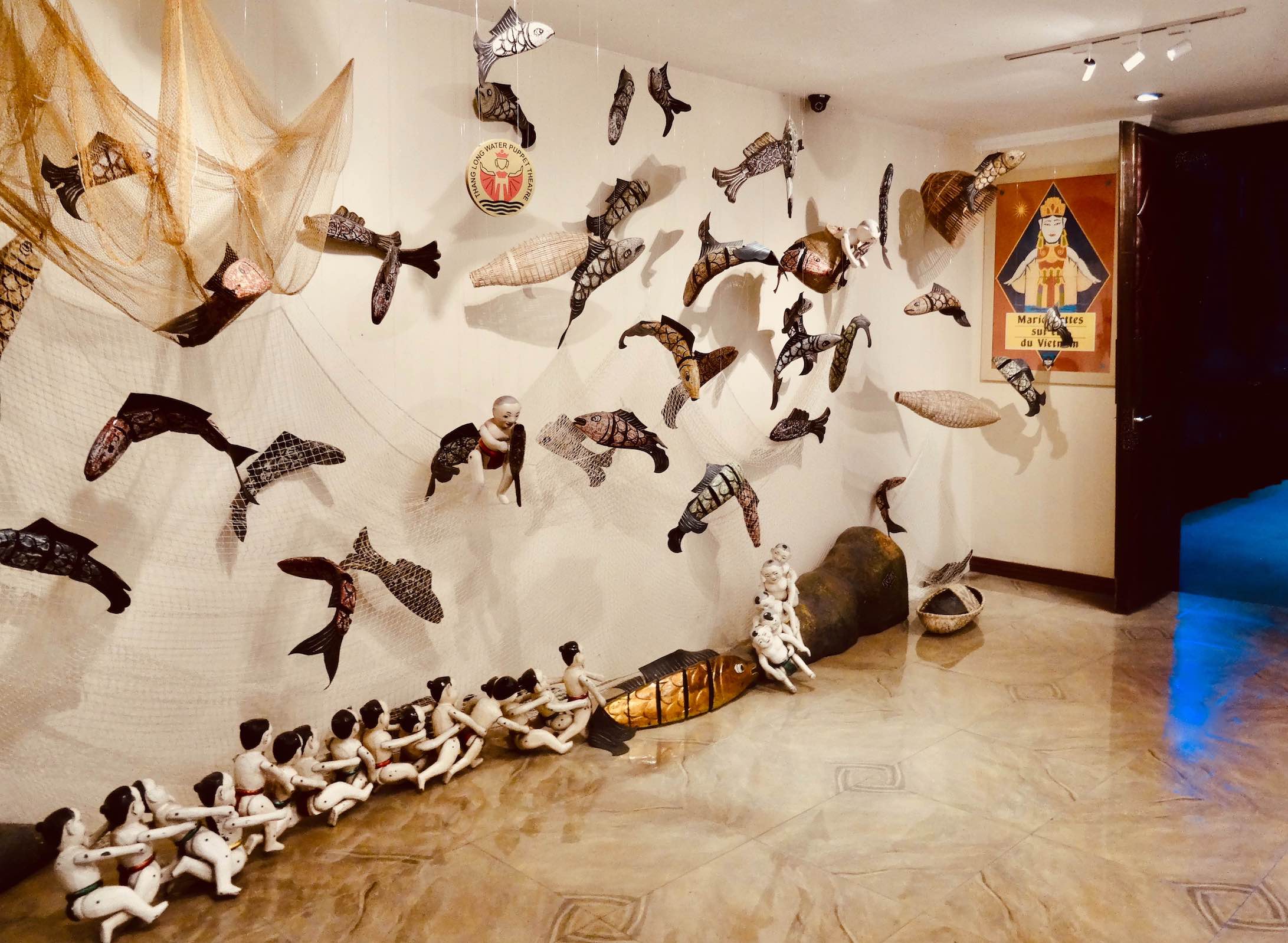 As it turned out, I didn’t have to wait at all. It was mid afternoon and I’d caught the theatre in sleepy mode. The woman at the ticket booth told me there was a show starting in twenty minutes. Hence I got my ticket and made my way up the main staircase, where I found the theatre door half open, bathed in a hypnotic blue light.

I’d read that visitors usually get searched and charged a separate ticket for their cameras. However, I didn’t even see a doorman that afternoon. Consequently, I was able to slip quietly inside the half empty theatre and take my seat without any extra charge. 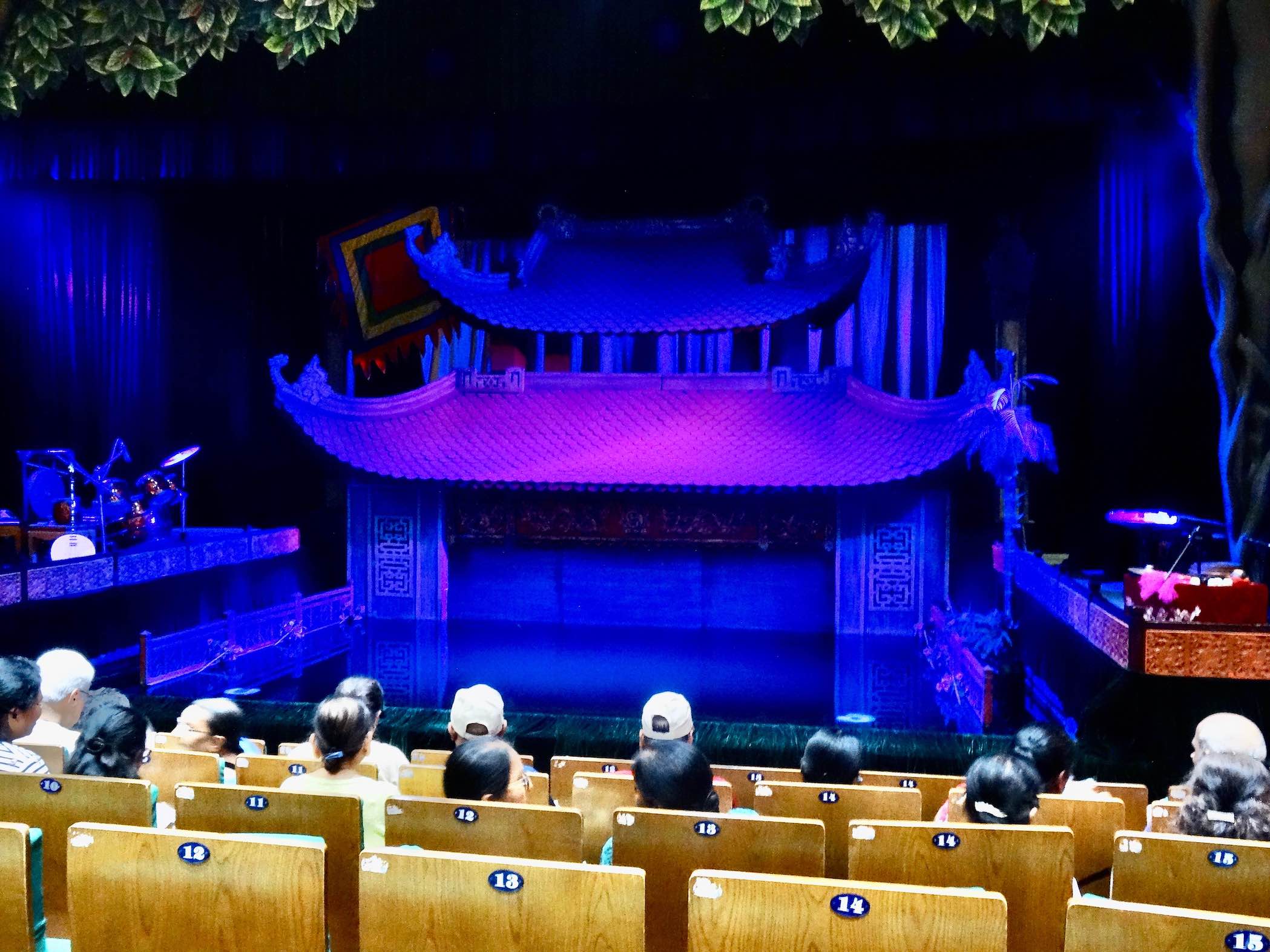 It was almost silent in the theatre, just the occasional whisper and the clicks of various cameras. A still, four square metre pool serves as the stage, framed by the elegant form of a traditional pagoda. That’s where the puppeteers, unseen for the entire performance, weave their magic behind a bamboo screen. 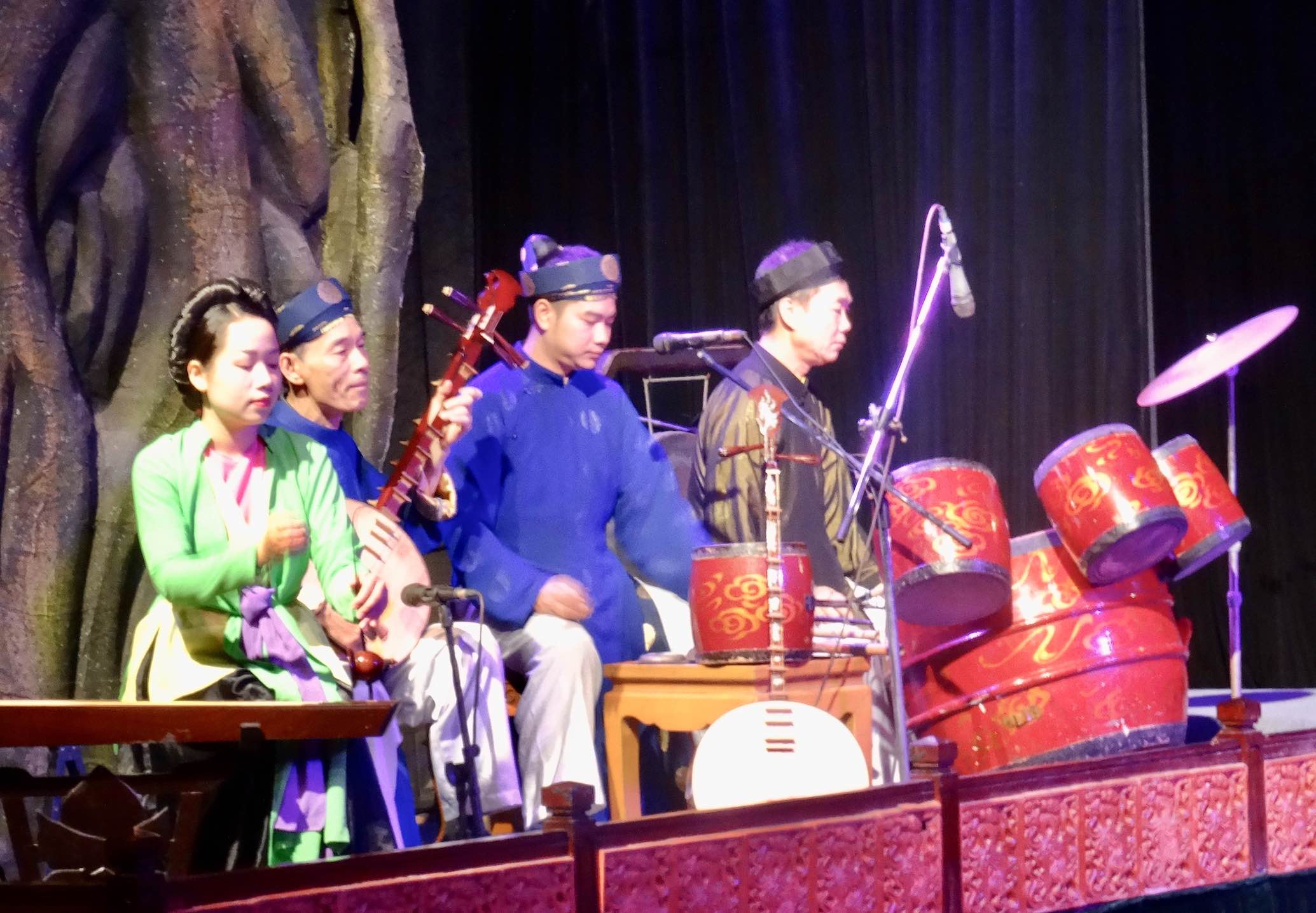 Within minutes the musicians arrived, four on each side of the stage, and began setting up their instruments. Following the briefest of sound checks, they launched into their opening number, a heady mix of high-pitched vocals, thumping drums, clanging bells and dancing horns.

I certainly wouldn’t call the music beautiful, but it definitely gets your attention. Creating, I’d say, a sense of foreboding for the events that unfold. Moreover, they say that the pool enhances the musical and vocal acoustics, the competing sounds bouncing off the water and echoing around the venue. 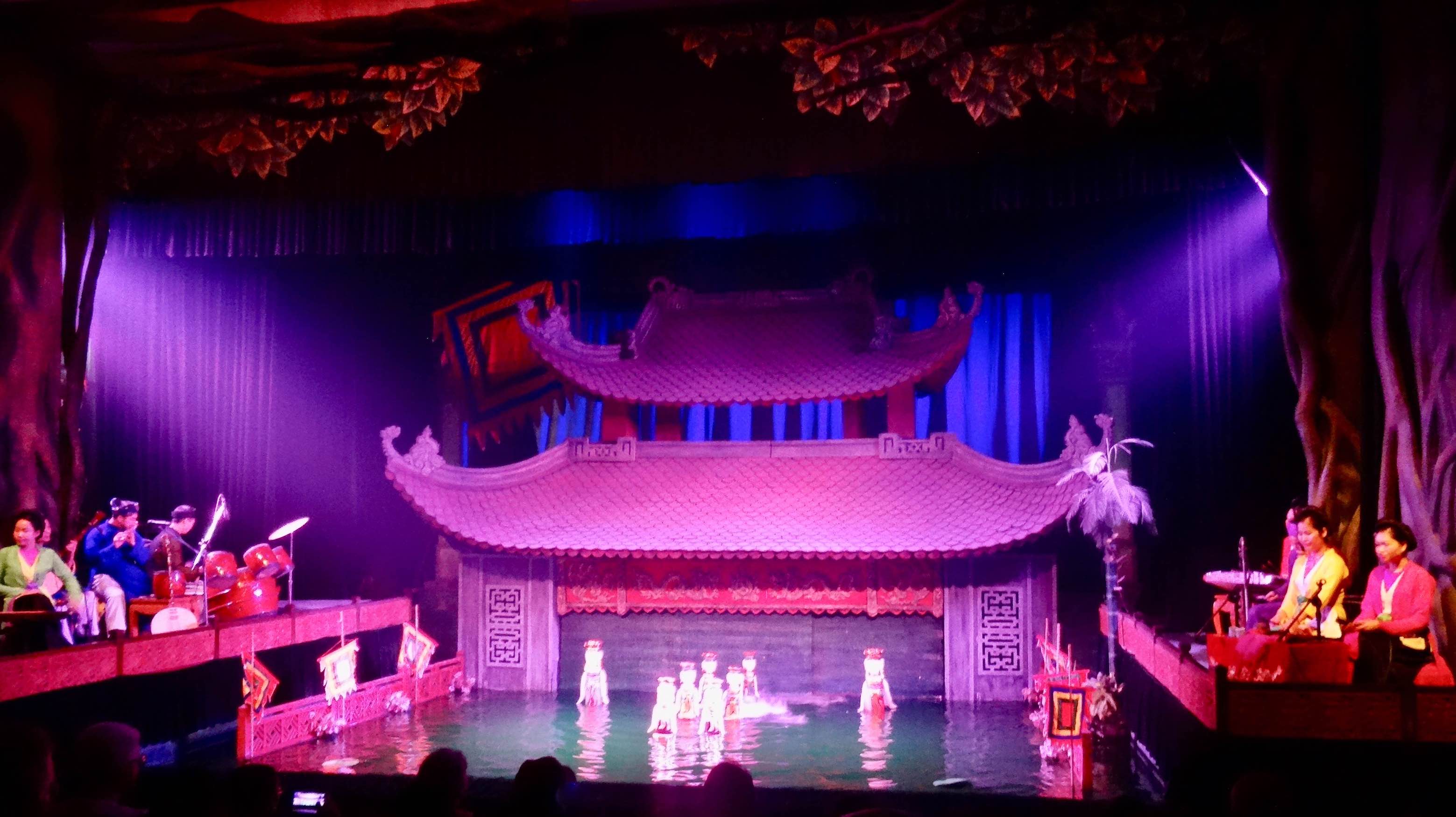 The show I saw that afternoon lasted for an hour and consisted of a dozen short scenes depicting ancient mythology and traditional Vietnamese life. A flurry of bamboo flutes hails a royal procession, while a cacophonous explosion of drums and cymbals sees a group of farmers fleeing from the unwanted attention of a fearsome dragon. 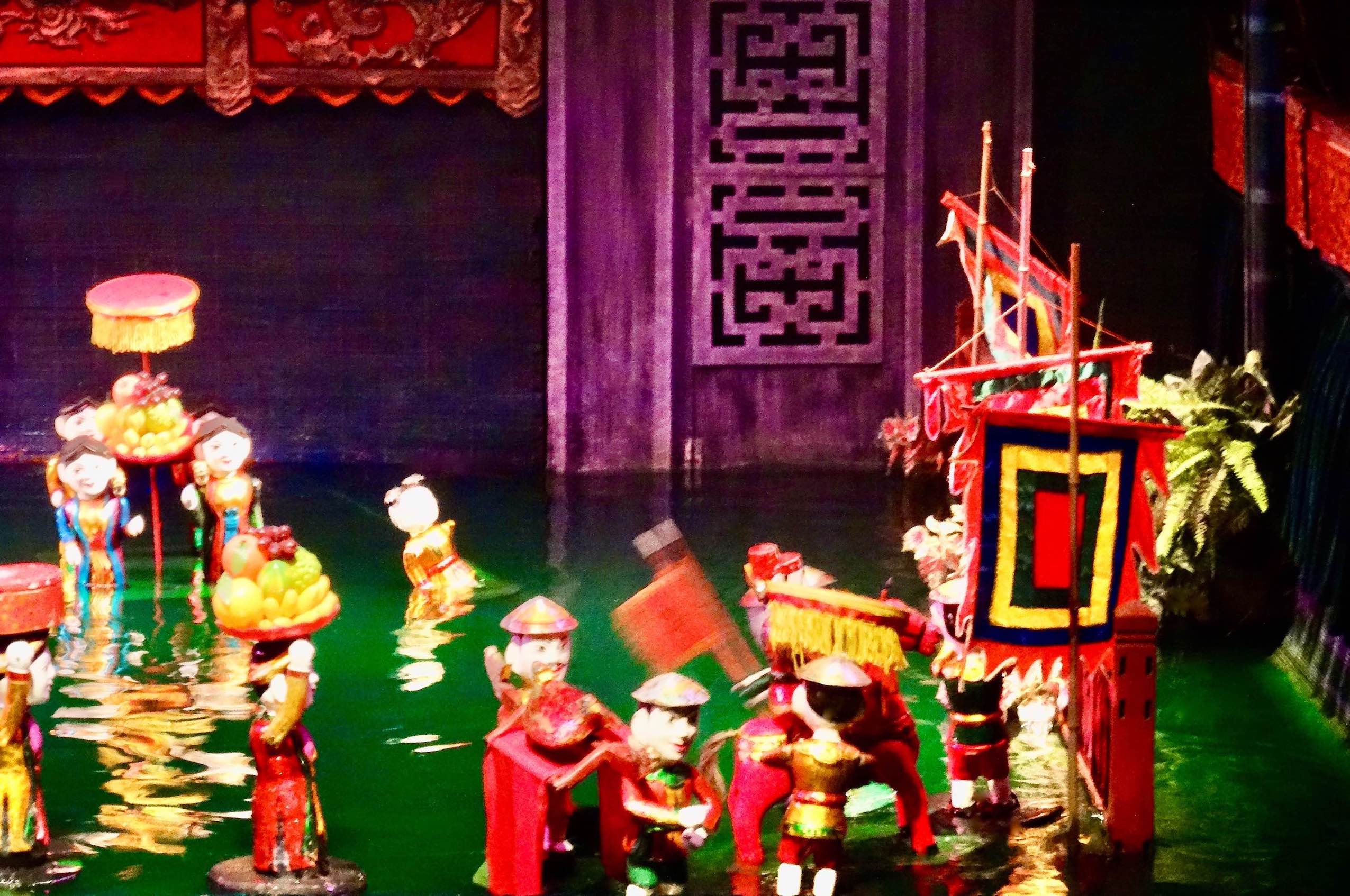 The puppets themselves are gorgeous, lacquered wooden creations that glide effortlessly across the pool. I was surprised to learn how heavy they are (up to 15 kilos apiece), especially when you consider how fast and skilfully the puppeteers manoeuvre them around the stage.

For the most part you don’t see the attached bamboo rods and strings. Though if you really focus you can catch the odd glimpse here and there through the water. Photographing the action proved exceptionally challenging and indeed I ended up discarding most of them. Furthermore, my attempts at video proved far from satisfactory, as I was too far back in the audience to get right into the action.

Nevertheless, it was a fun and unique experience that is surely not to be missed for anyone spending even a short time in the country. I liked the slapstick humour that permeates some of the scenes. Such as when a school of fish give a boat of frustrated fishermen the runaround.

I also appreciated how the musicians interact with the stories. A warning shout, for example, from the concerned flutists ensures one puppet dodges a dragon’s killer blow right at the last moment. Phew! Keep in mind that the performance is a strictly Vietnamese language affair. Not that this should put you off in any way, as the spoken word is kept to a minimum, with a reliance on the visuals to bring the simple narratives to life. 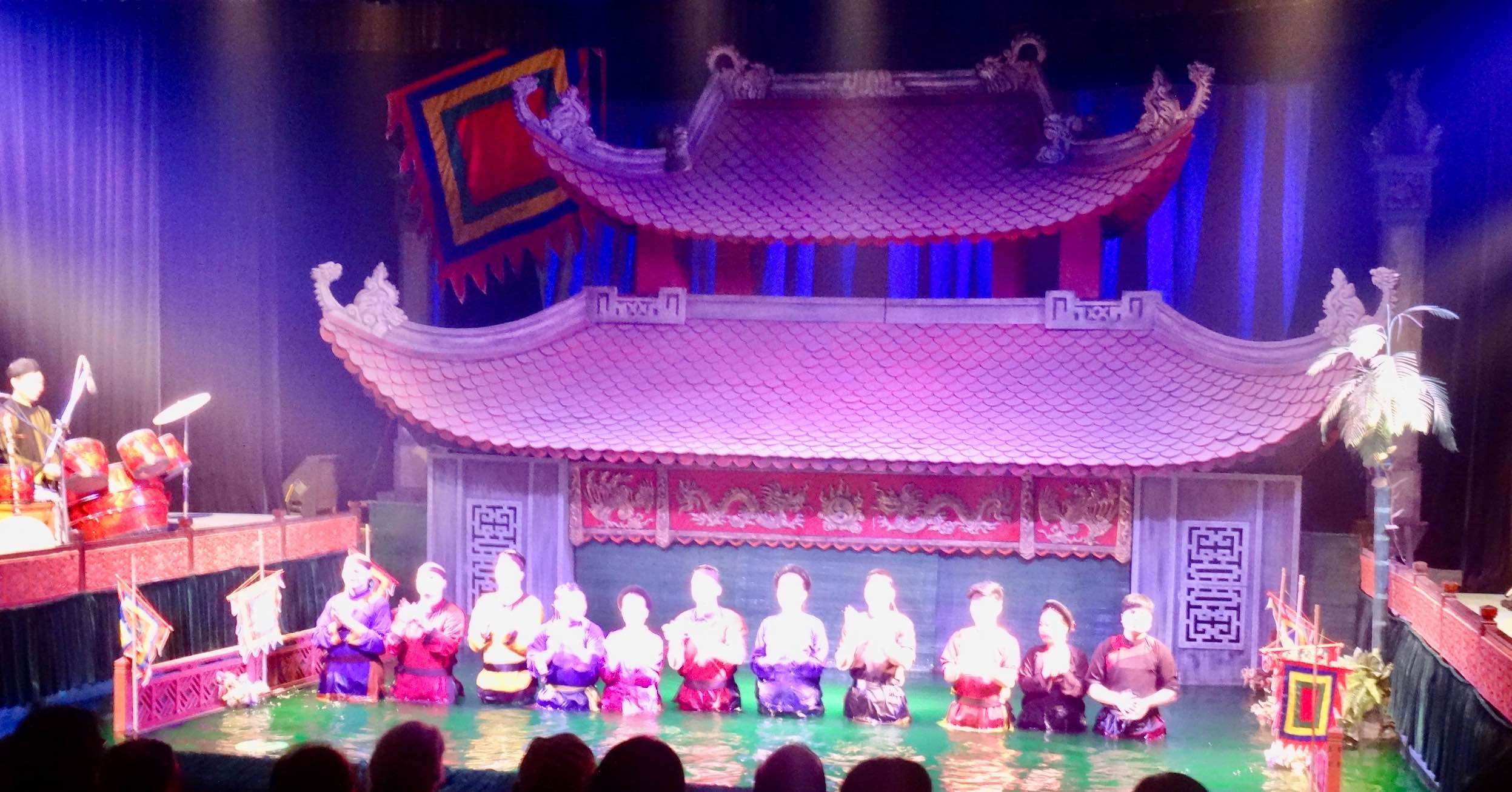 At the end of the show the puppeteers came out to bow before the audience and drink in the applause. With wide grins, and in a few cases a triumphant punch in the air, they clearly take a lot of pride in their craft. Their enthusiasm is infectious, so much so that it’s virtually impossible not to exit the theatre with a grin all of your own. 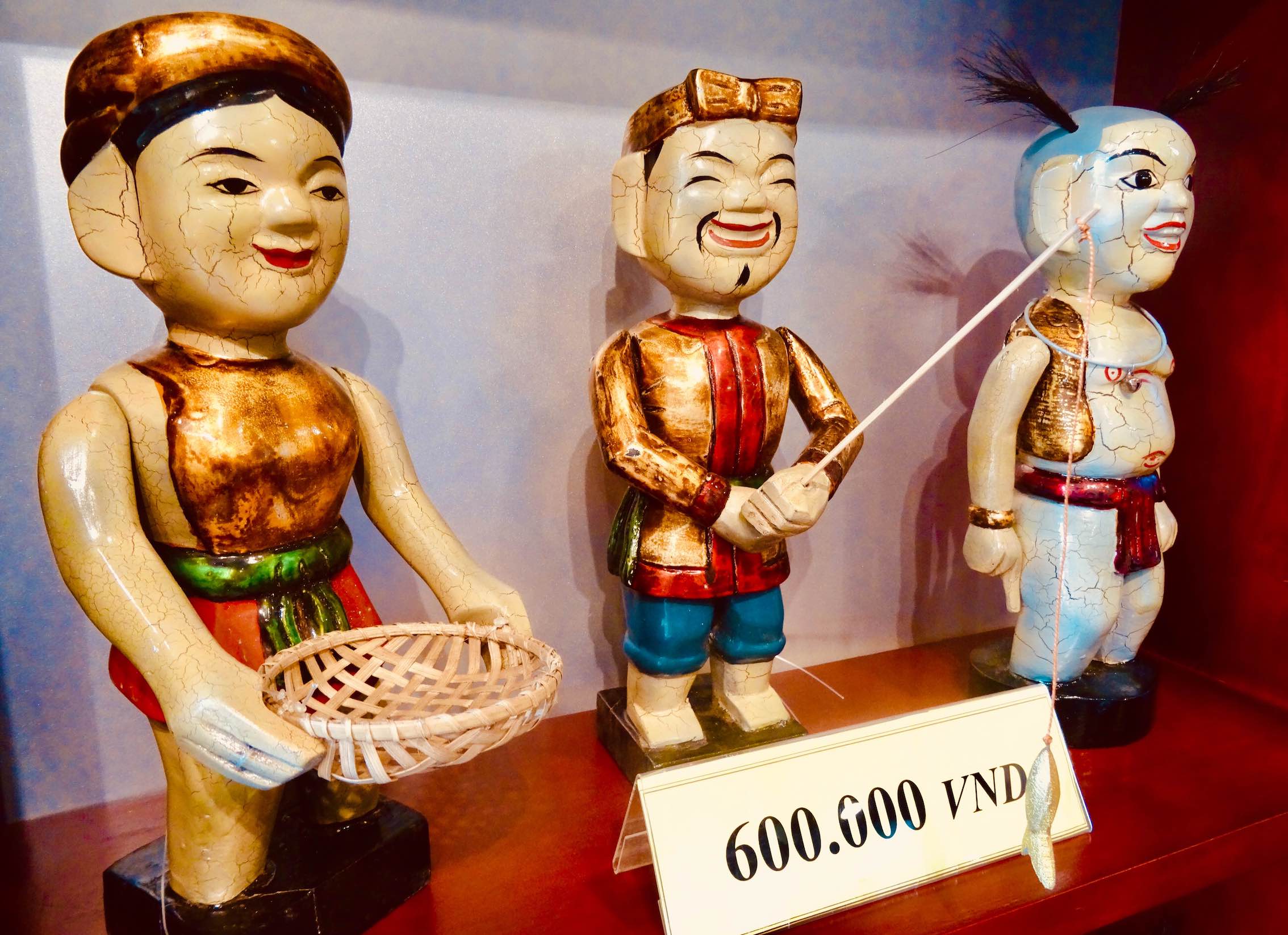 Back in the main hall I found myself gravitating towards the gift shop. I’m not usually one for souvenirs, but these puppets are wonderful creations with bags of charm. Could I maybe fit one into my backpack? Hmm, not these ones. Which was a pity, because at 600.000 VND (around $26) they’re actually reasonably priced. 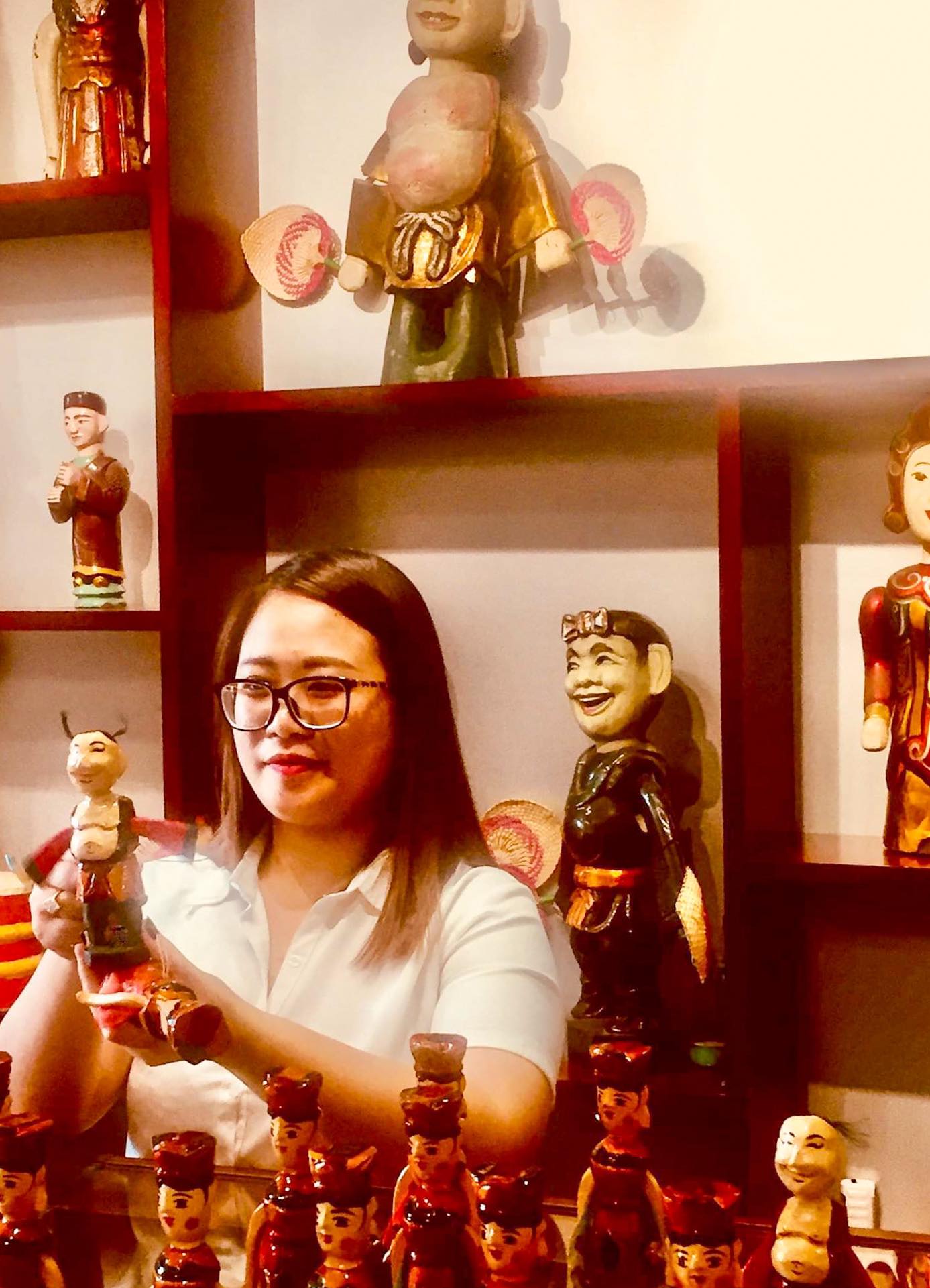 Happily, I found a range of smaller models. After much deliberating I ended up purchasing a diminutive fisherman, complete with a little rod and a fish dangling at the end of the line. As I recall, it was no more than a few dollars and easy enough to fit into my backpack’s front pouch.

A visit to Thang Long Water Puppet Theatre is an excellent opportunity to experience an authentic slice of Vietnamese culture. And at just 100.000VND for the cheapest tickets (£3.30/€3.70/$4.40) it won’t be troubling your wallet. In today’s COVID era it’s best to check in advance what’s going on with showtimes and social distancing rules. Check out their website for more info.