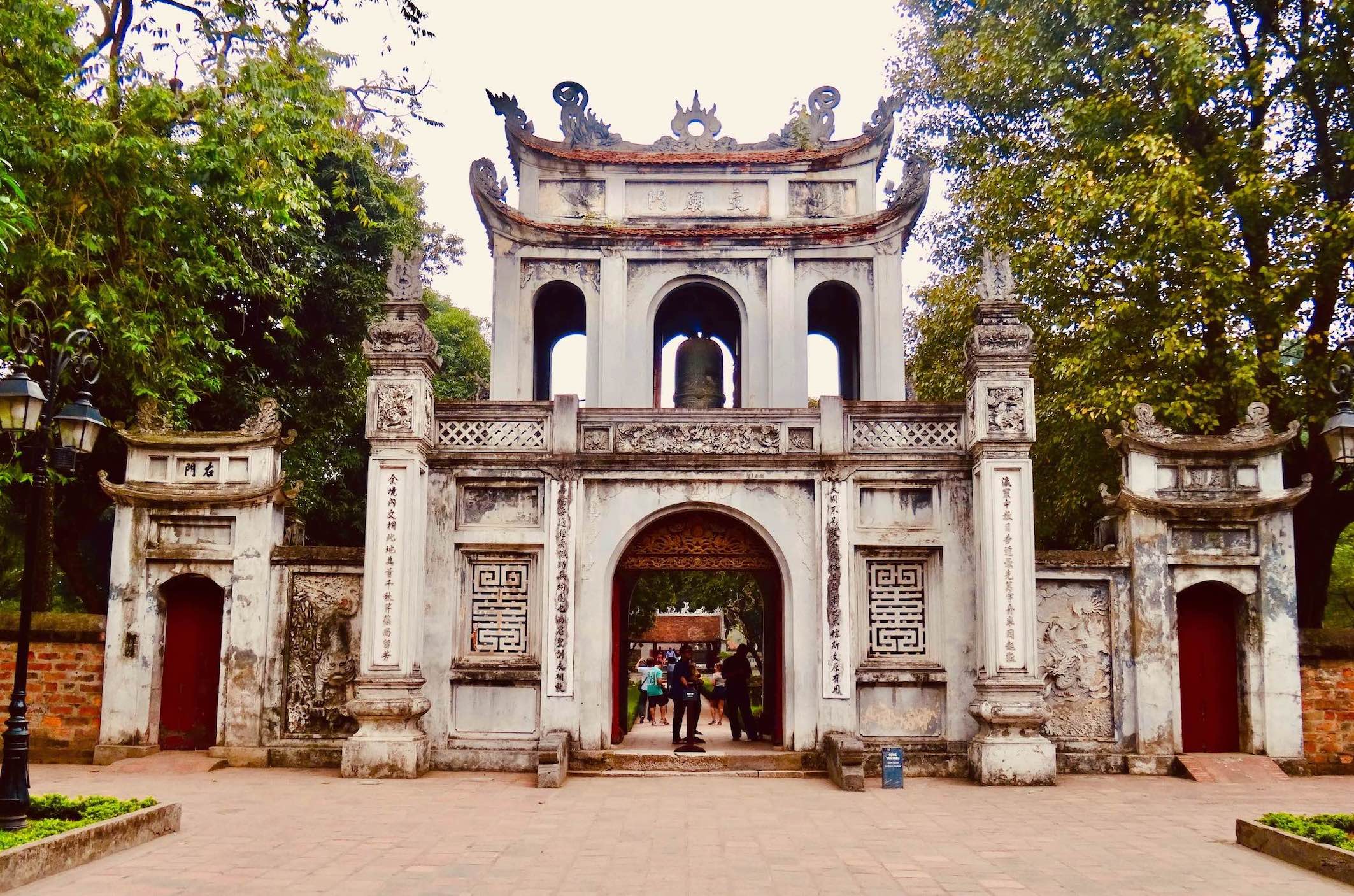 No matter where I go, I aways seem to bump into my old buddy Confucius. Indeed I’ve been to perhaps a dozen temples across the world dedicated to the famous philosopher. I’ve also photographed statues of the celebrated old sage in Thailand. And visited Hyanggyo School, constructed in his honour in the South Korean city of Jeonju. 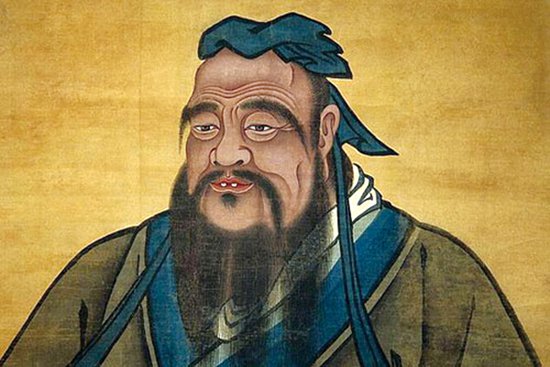 Confucius: You can’t get away from him.

Moreover, the ultimate Confucius experience if you will, I went to his hometown in the Chinese city of Qufu. It’s pretty much a Confucius Disney World, where you can visit Confucius Temple, Confucius Hall and even his grave, set on the edge of the pretty Confucius Forest. 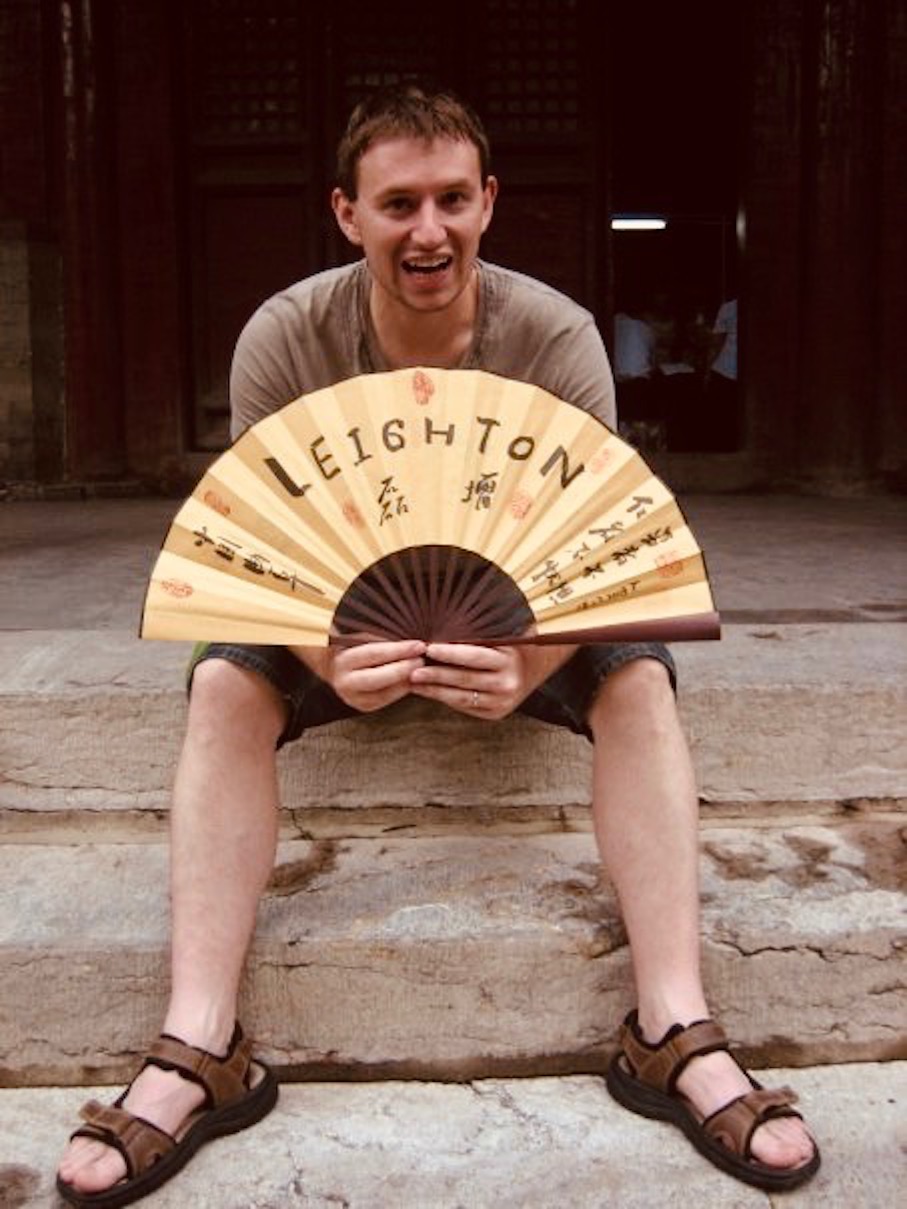 Outside Confucius Hall in the summer of 2009.

When I first heard about a Confucius dedicated temple in Hanoi, I admit my initial thought was… meh. During my stay in the Vietnamese capital I’d been (kind of) taking a break from temples. Plus I figured there are only so many Confucian temples one needs to see.

But then…. typical me.. I ended up within close walking distance one day. Thus I found myself strolling through the entrance gates of Quoc Tu Giam (Temple of Literature). 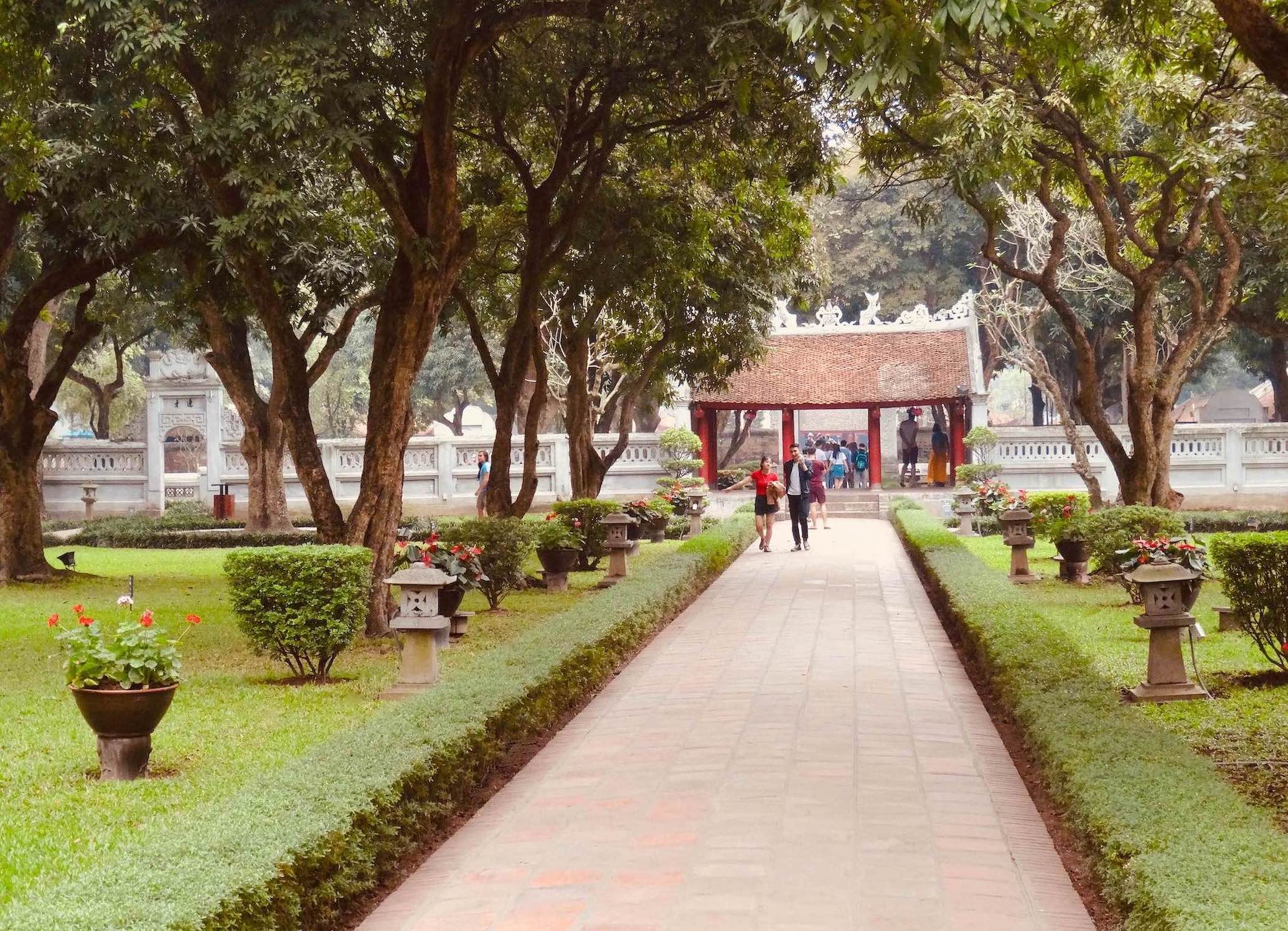 Temple of Literature: The First Courtyard.

King Ly Thanh Tong ordered the temple’s construction in the autumn of 1070. According to historians, he’d become fascinated by the teachings of Confucius. Hence he dedicated the place to the great man and his four closest disciples Yan Hui, Zengzi, Zisi and Mencius. That’s the First Courtyard pictured above, home to a family of stunning banyan trees. 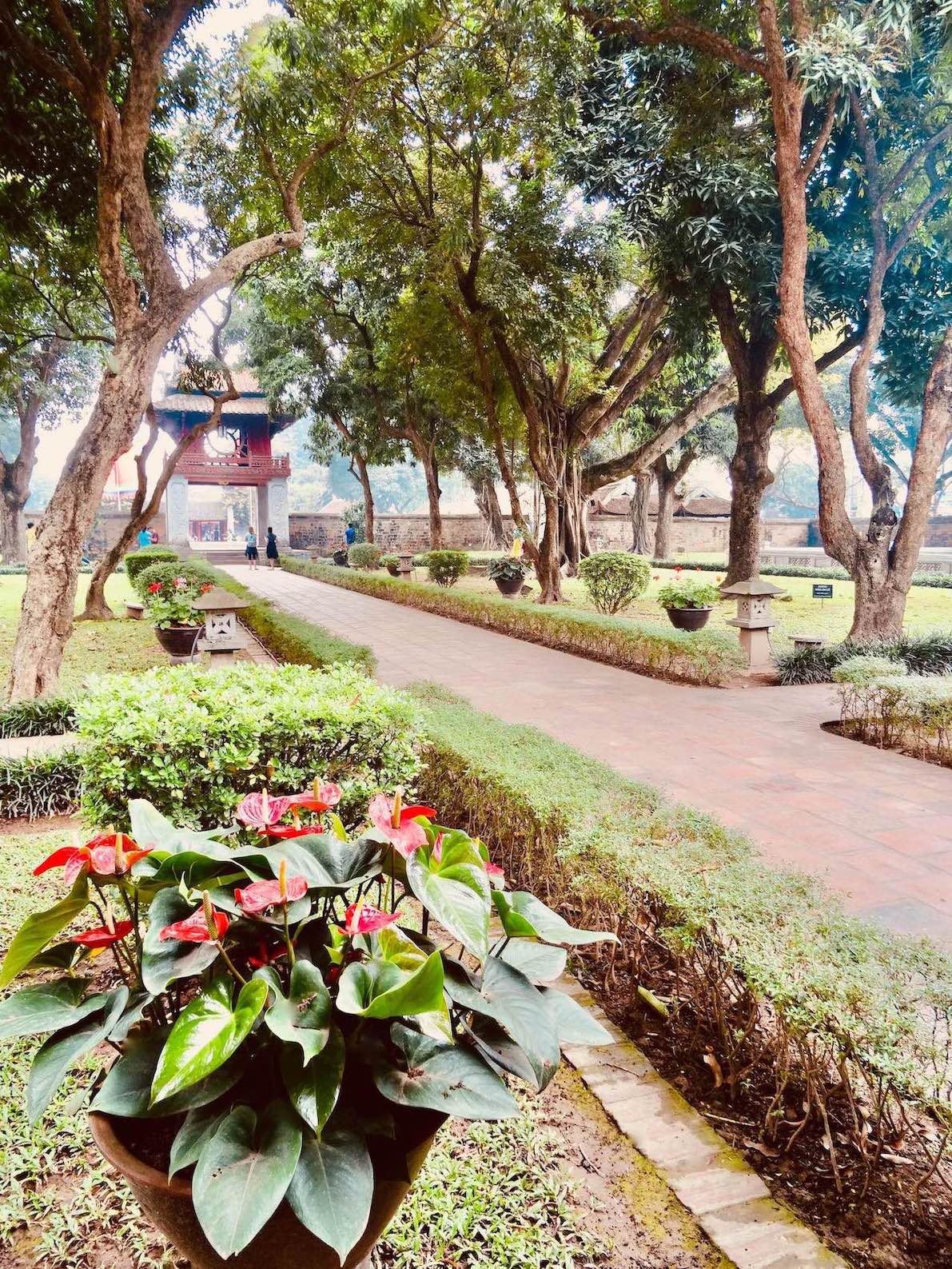 Temple of Literature: The Second Courtyard.

In 1076 Vietnam’s first university sprung up within the temple grounds. It was created in order to educate members of the royal family, in addition to noblemen and wealthy Hanoians. For the most part courses focused on Chinese literature, poetry and classical writing. It remained Vietnam’s most prestigious establishment until 1802 when a new imperial academy opened in the city of Hue. 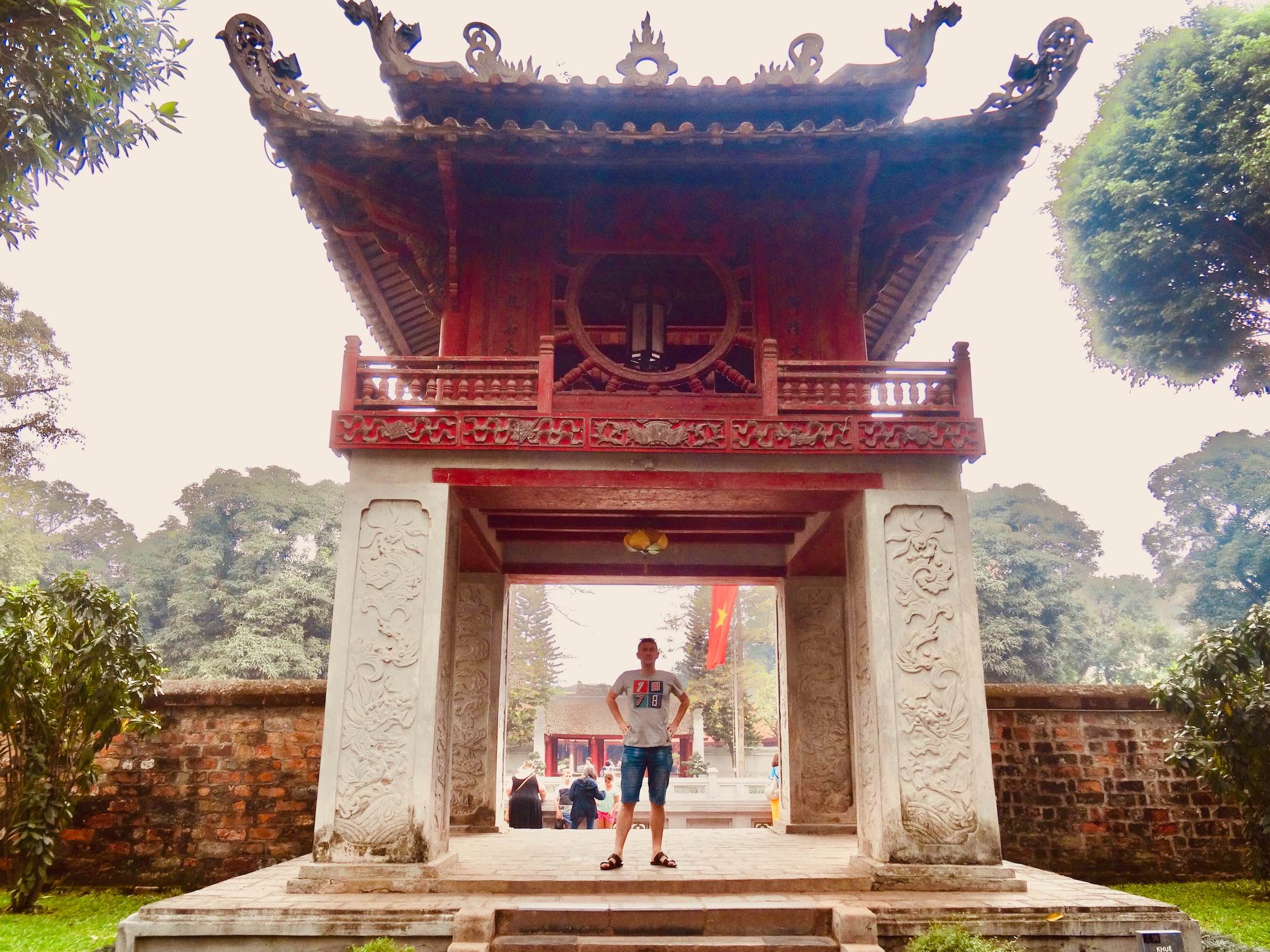 The handsome Constellation of Literature Pavilion connects the second and third courtyards. Added in 1805, the stone platform represents the Earth, while the wooden two story tower symbolises the sun. Known locally as Khue Van Cac, it contains a large bronze bell and carved paragraphs of some of Vietnam’s most cherished poetry. 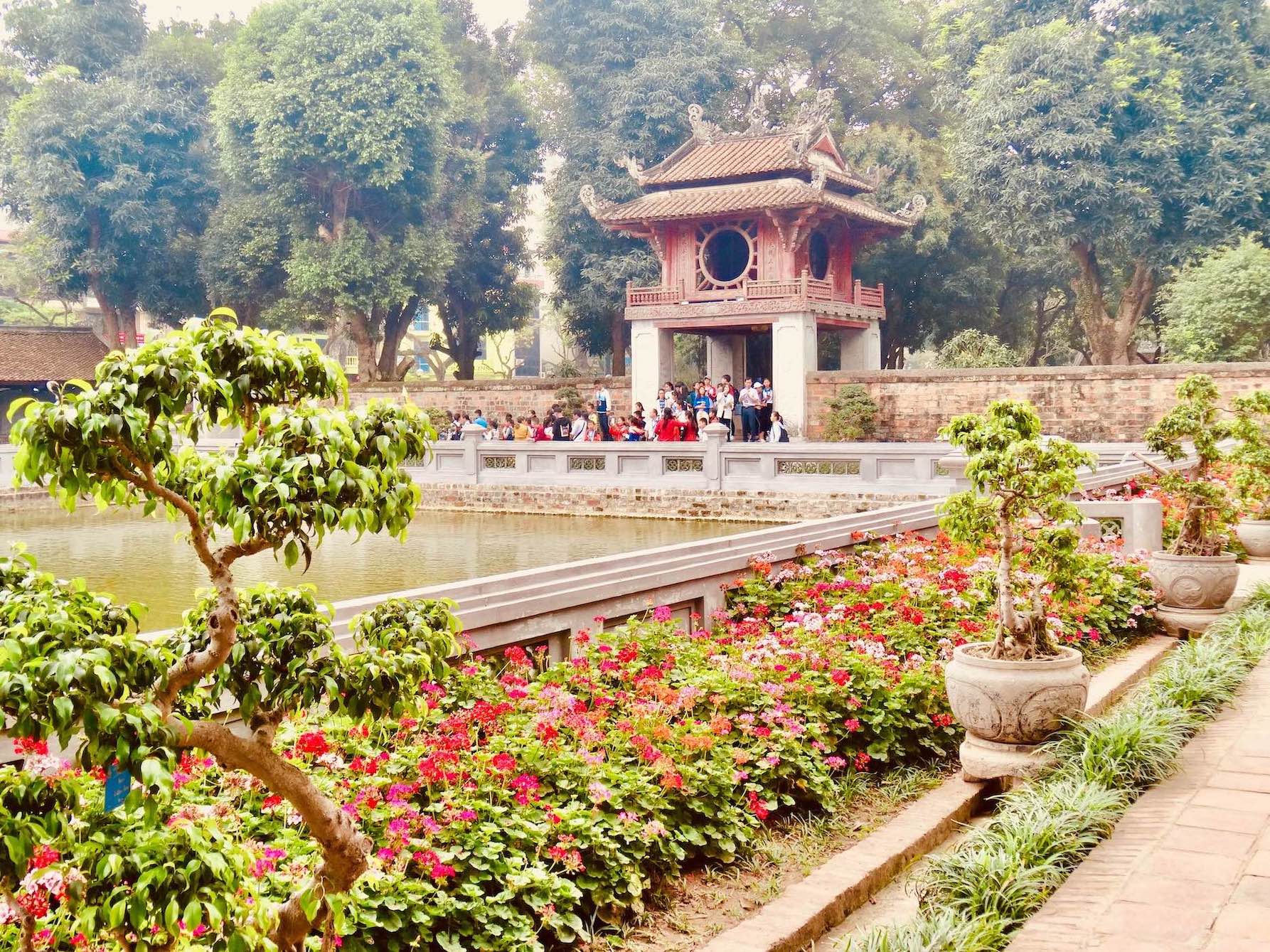 The Third Courtyard is definitely the most beautiful of the temple’s five sections. And it’s all thanks to the gorgeous Thien Quang Well, a large, square, deep-green pond with fish and turtles. An immaculate frame of lush greenery surrounds it, including fulsome rosebushes and twisting bonsais. 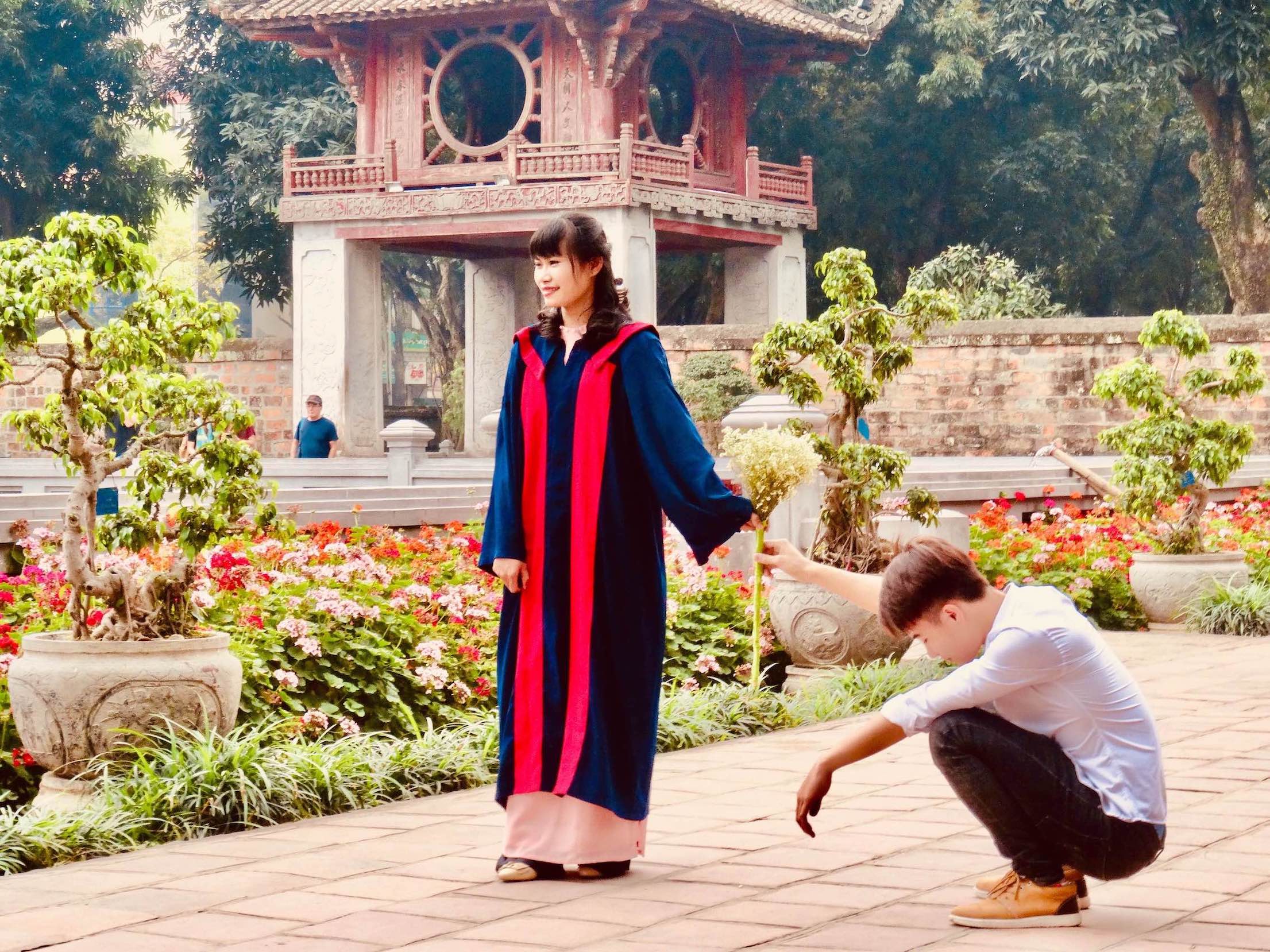 Consequently, The Third Courtyard is the busiest part of the temple. On the day of my visit there was a sizeable group of college graduates posing for photos. Dressed in their robes and clutching flowers, it was fun to watch them celebrate their achievements in Hanoi’s most historic educational institution. 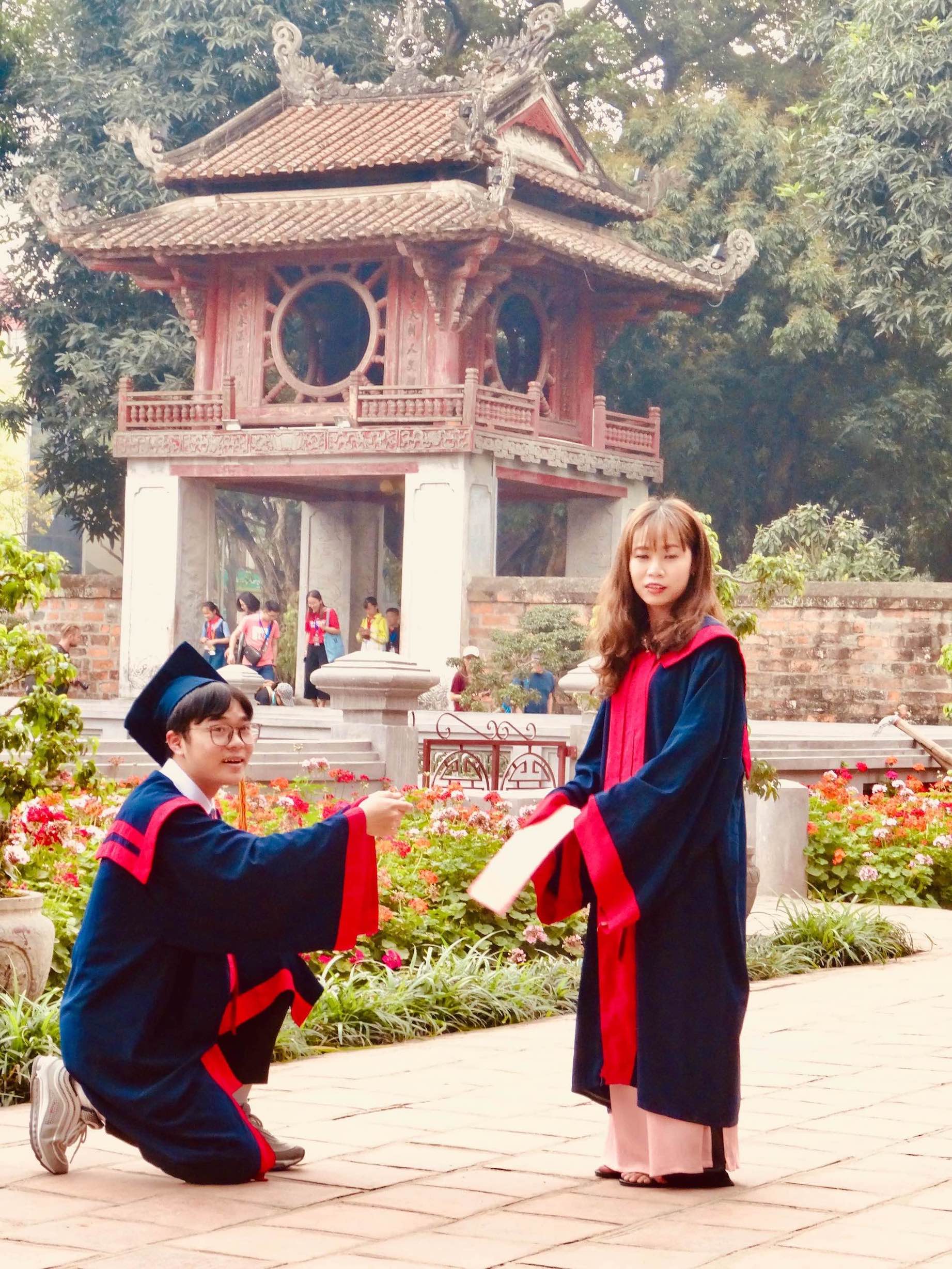 The Third Courtyard is also home to two rows of curious stone Doctor’s Tablets. The turtle themed steles (turtles are a symbol of wisdom and longevity) honour the educational achievements of over 1300 students who reached doctoral ranks in the exams of The Royal Court. 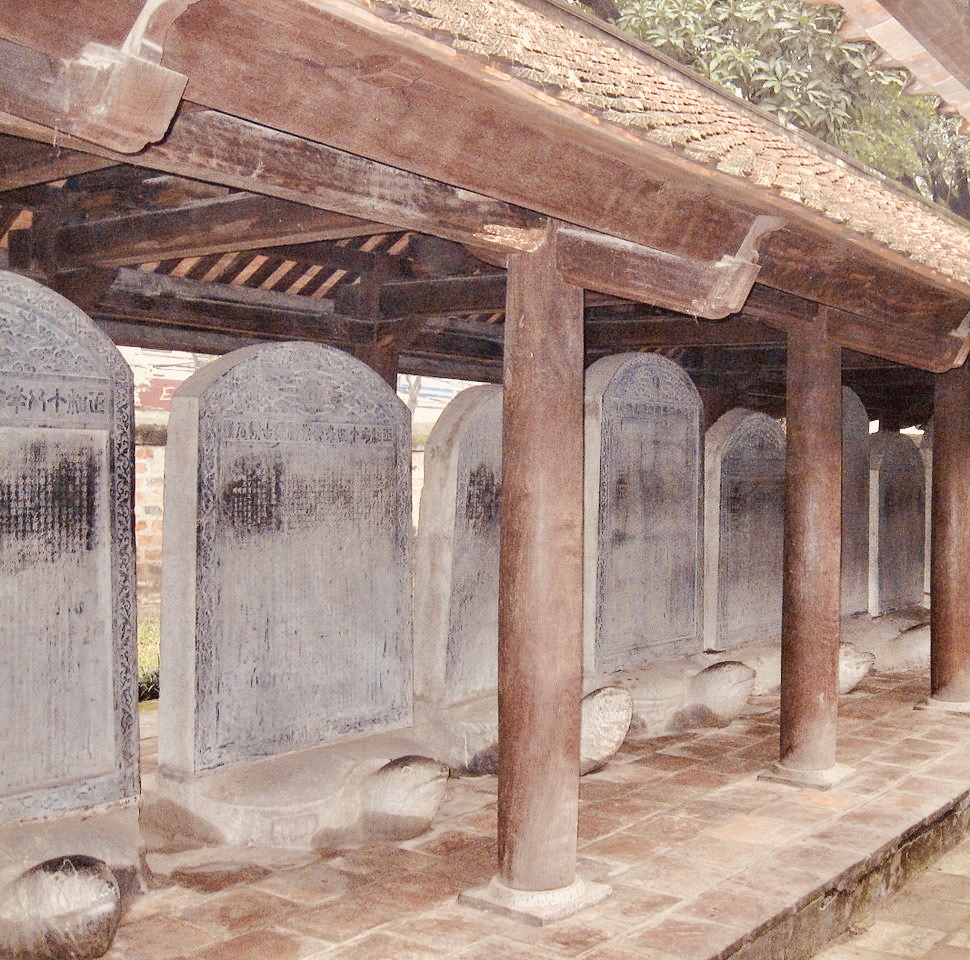 The tradition of adding a tablet for graduates began in 1484. Each creation has a unique turtle design and includes personal info as well as details regarding the examination itself. The turtles are also symbols of good luck. In fact, it’s a custom for students to come and rub their heads prior to taking important exams.

From The Third Courtyard I emerged into The Courtyard of the Sages, the temple’s ceremonial heart. Also known as The Fourth Courtyard, this is where you’ll find two 19th century halls honouring Confucius. 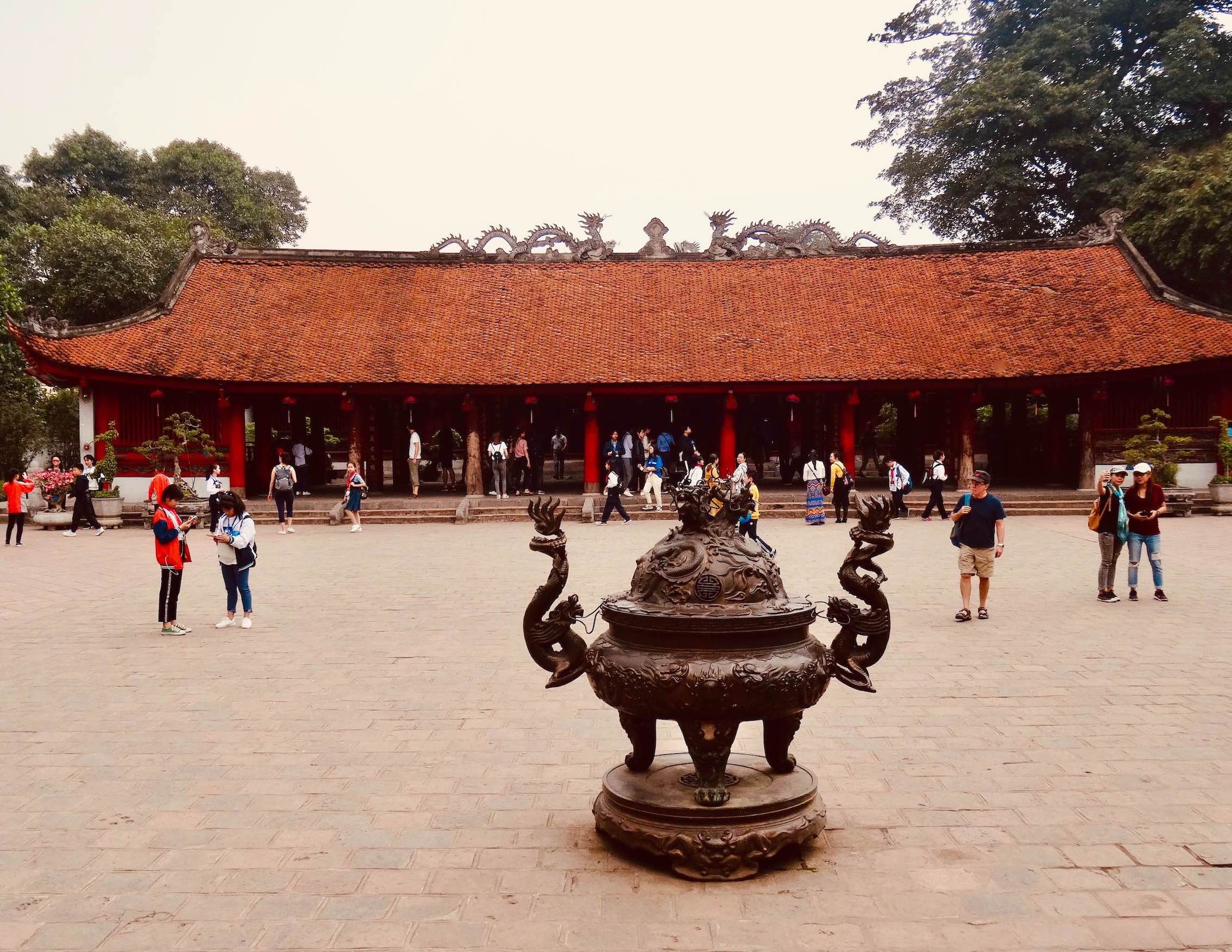 The main shrine (Dai Bai Duong) is where worshippers come to pray before the altars of Confucius and his disciples. Furthermore, there are shrines to some of the Imperial Academy’s most noted students. And even a small museum that exhibits their books, pens and ink pots. 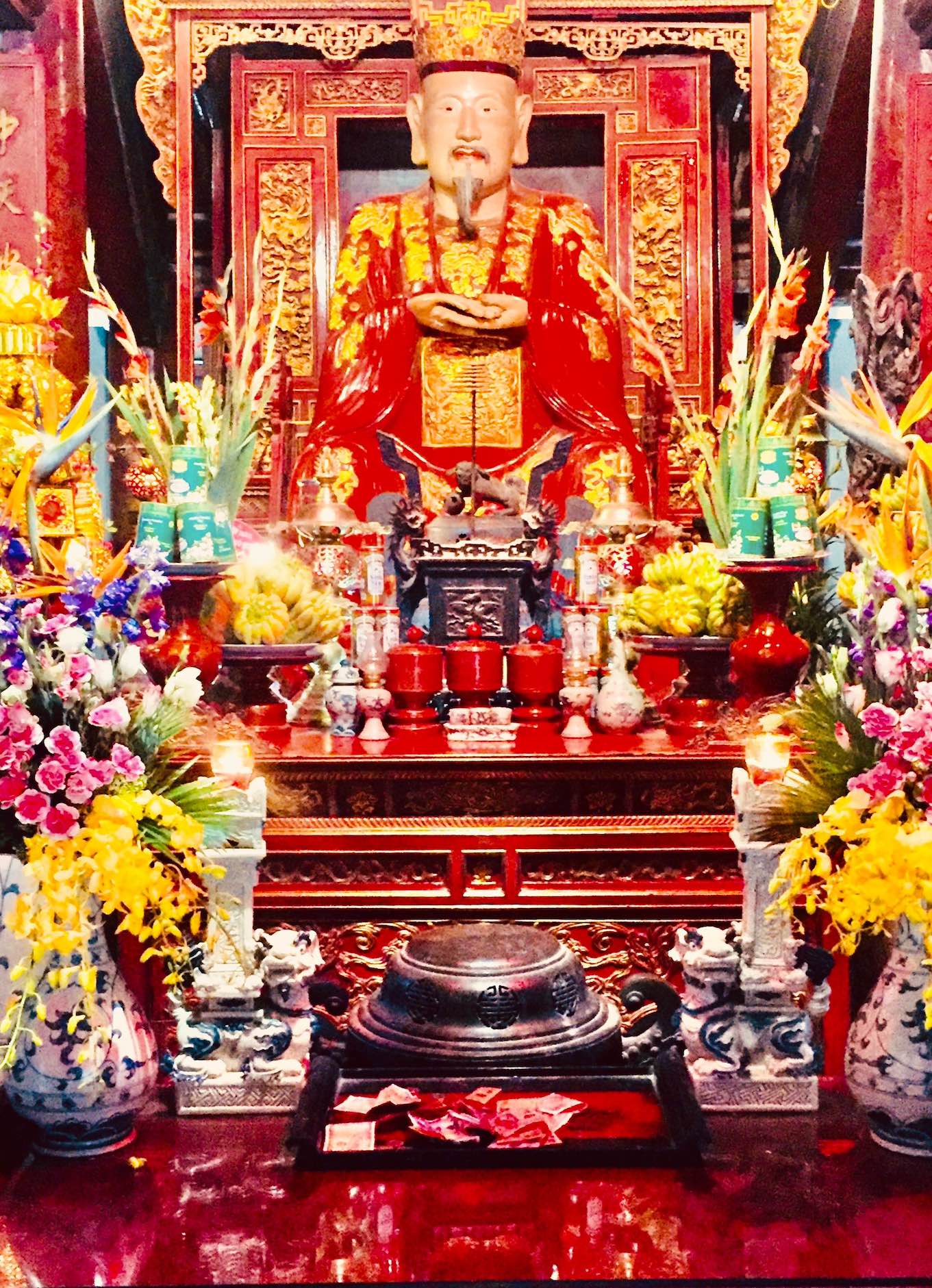 Right at the back of the complex, in the Fifth Courtyard, stands a cluster of traditional halls. Known collectively as the Thai Hoc Buildings, they mark the spot where the now destroyed Imperial Academy once stood.

It was the French who demolished the site in the 1940s to make way for a hospital. Today that’s gone too, while the buildings in its place host cultural events, ceremonies and exhibitions. 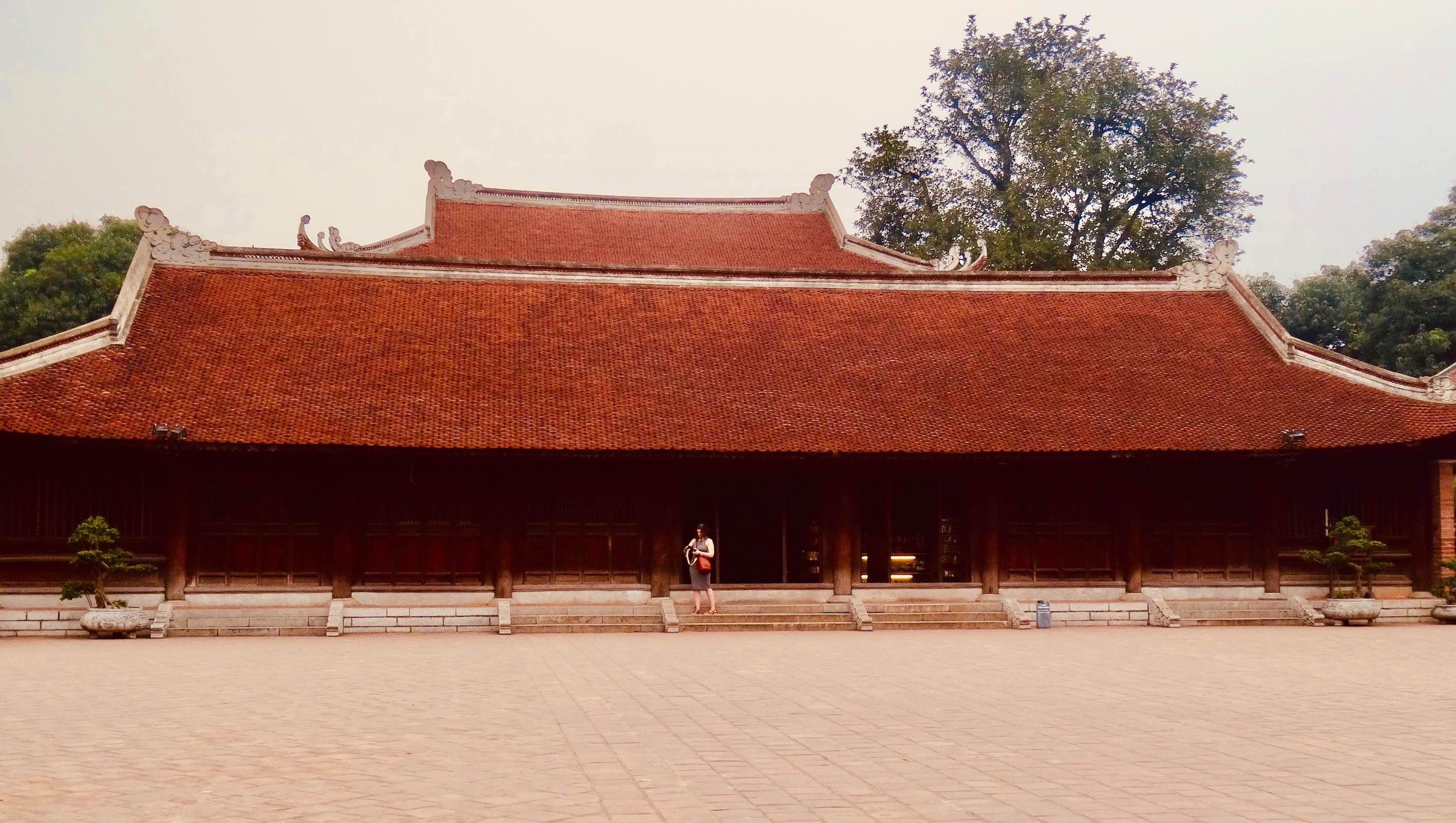 I’m glad I took the time to check out the Temple of Literature. It’s a really handsome compound and the sense of history that runs through the place is inescapable. Indeed there is no underestimating how important the complex is both historically and in the hearts of the Vietnamese. Images of the temple even feature on the back of the 10.000 Dong banknote. It opens seven days a week between the hours of 08:00-16:30. Entry is 30.000 VND ($1.30). 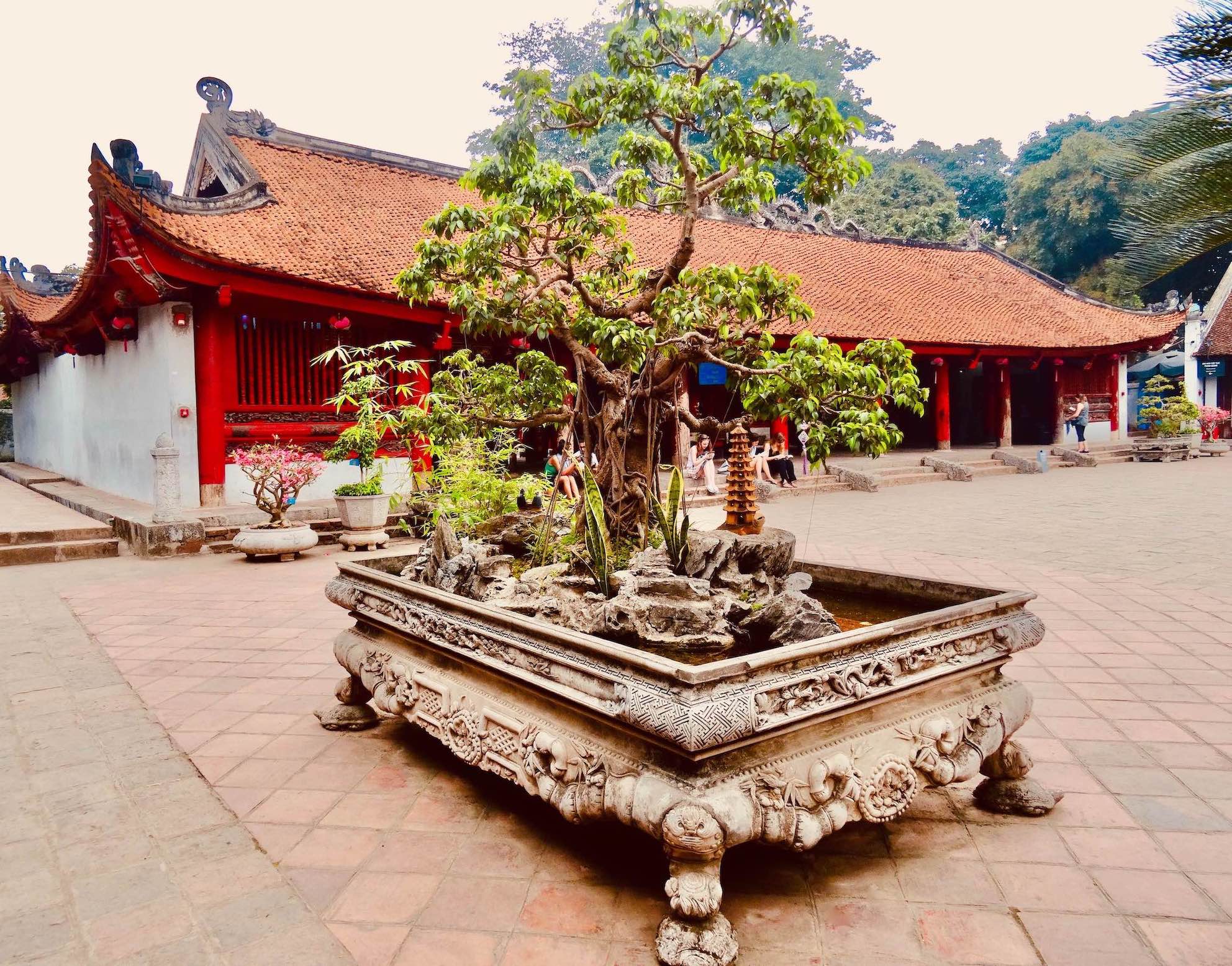