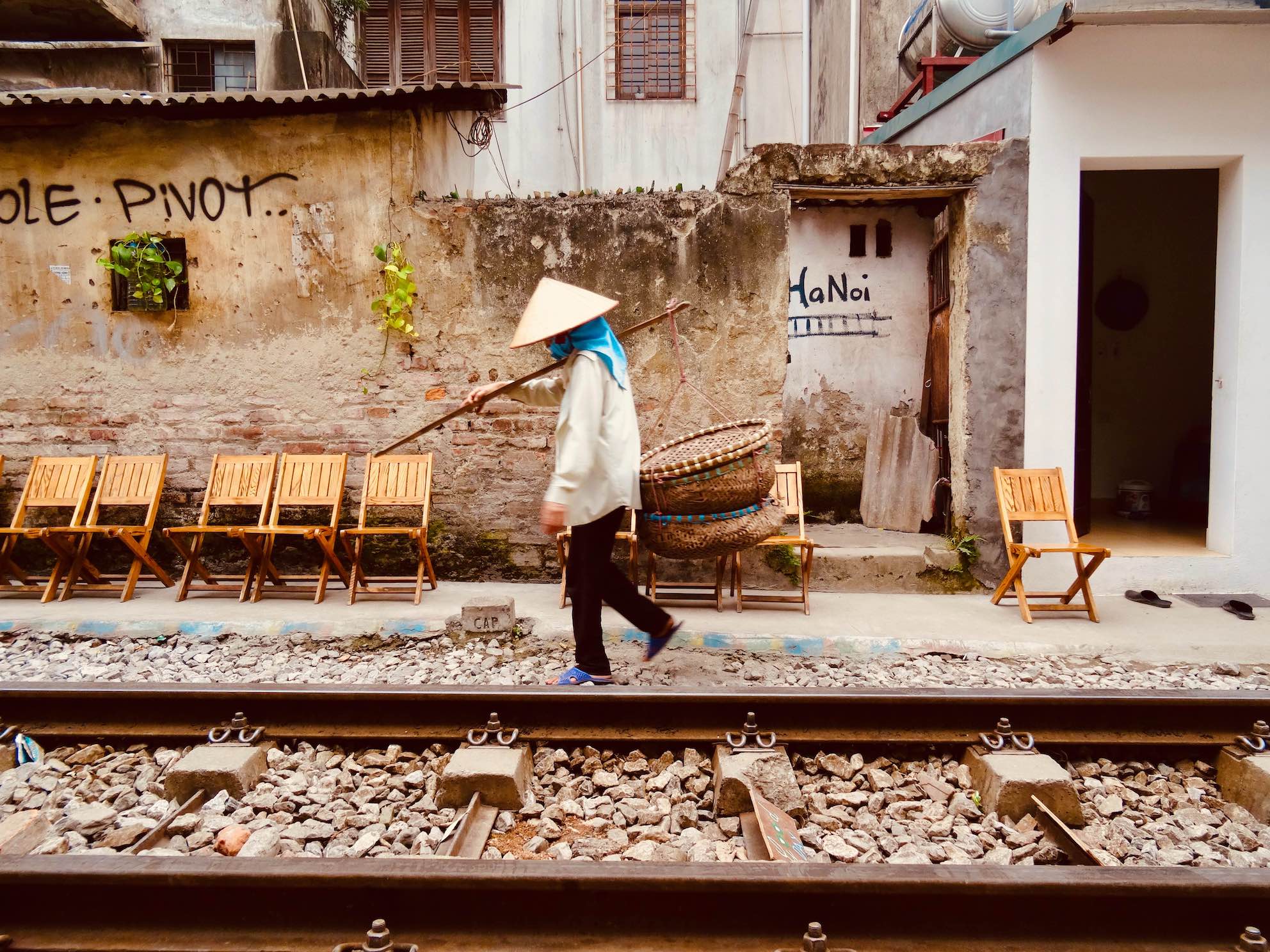 I was starting to think that I would never find Hanoi Train Street. With no official listing on any online map app, I’d been relying on written directions from a blog article. Directions that turned out be… if I’m charitable… patchy. And so unfolded a frustrating hour of walking around in circles on the western side of the city’s old quarter.

It didn’t help that there weren’t any street signs to identify most of the roads and alleys. Nor that not one person I asked, neither locals or foreigners, had even heard of Hanoi Train Street. Really? Had I been the victim of some grand, elaborate hoax?

I knew that I was looking for a narrow street called Tran Phu, also known as Alley 26. And that said alley was snugly sandwiched between Le Duan and Khao Thien Streets. But as I couldn’t find any evidence of these places, this wasn’t much help. 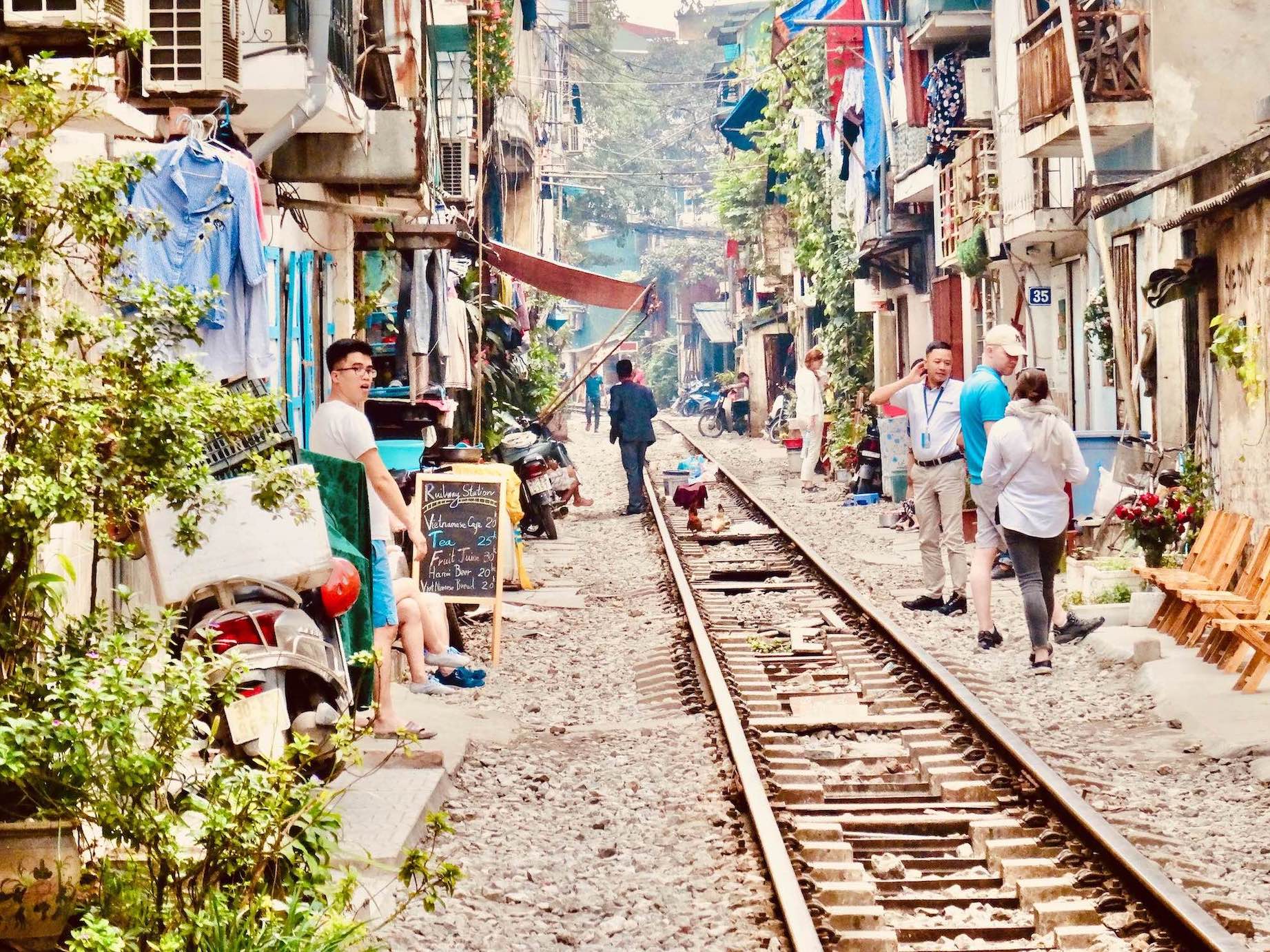 I was literally about to give up hope and head back towards my hotel when I finally caught a break. Catching sight of a crossroads ahead, my eyes picked out a raised section of rail track stretching off into an unseen side street. Moments later I was turning onto the street and my heart skipped a beat. Yes! It certainly felt good that I hadn’t entirely wasted my afternoon. 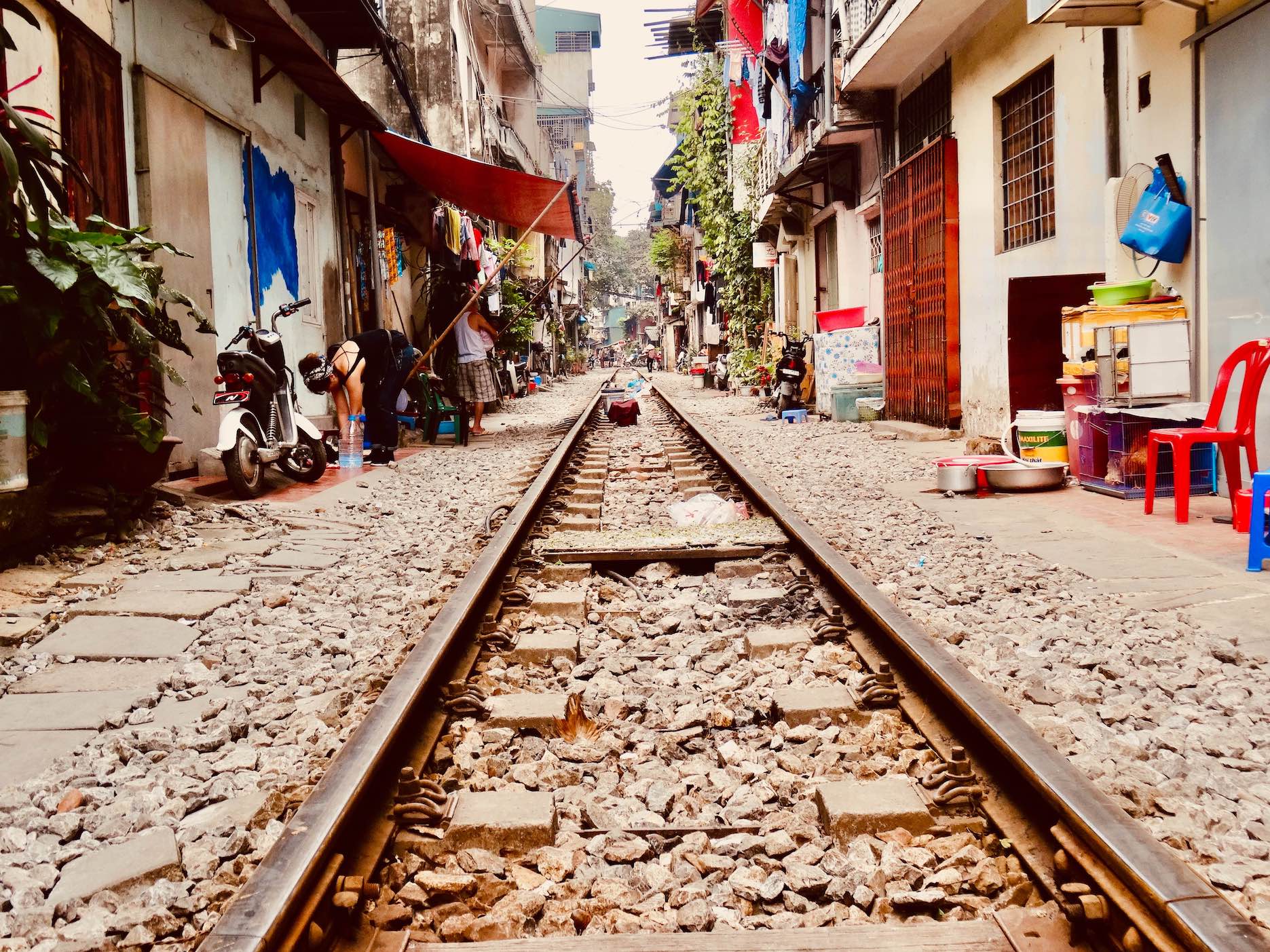 Immediately my irritation began to melt away as I found myself swept up by the charms of this historic 500 meter stretch. Walking right on the track between the rails, I spied an old woman hanging up laundry outside her home. Elsewhere, children played tag around the entrance of a general store, while a pair of hungry chickens pecked uselessly among the loose stones. Between 1899 and 1936 Hanoi’s French colonial rulers constructed the grand North South Railway service connecting the major cities of Hanoi and Ho Chi Minh. One of the capital’s major hubs was Long Bien Station (more on that in my next post). It was from there that a number of services ran right through local neighbourhoods before rattling off into the countryside. 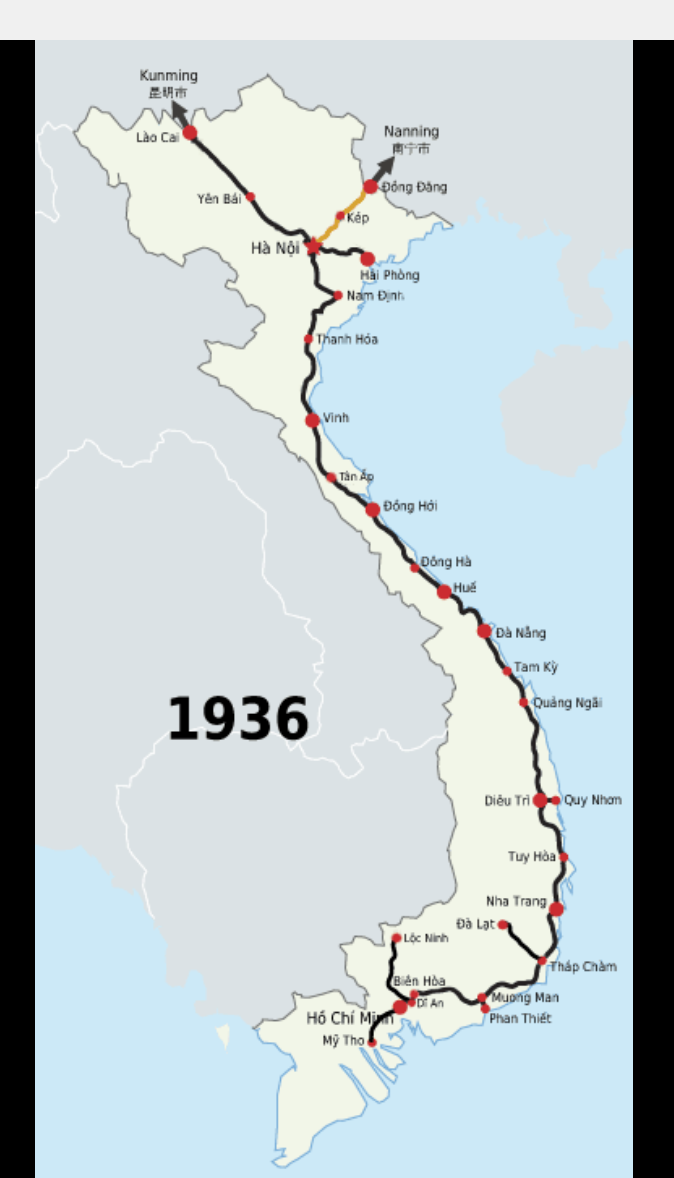 Today most of these so-called train streets are long gone. However, a few still remain, offering an authentic glimpse into traditional Vietnamese communities. With their homes and businesses standing just a few steps from the tracks, they have to gather up their kids and clear away any stalls whenever a train comes rumbling by. Pretty cool. 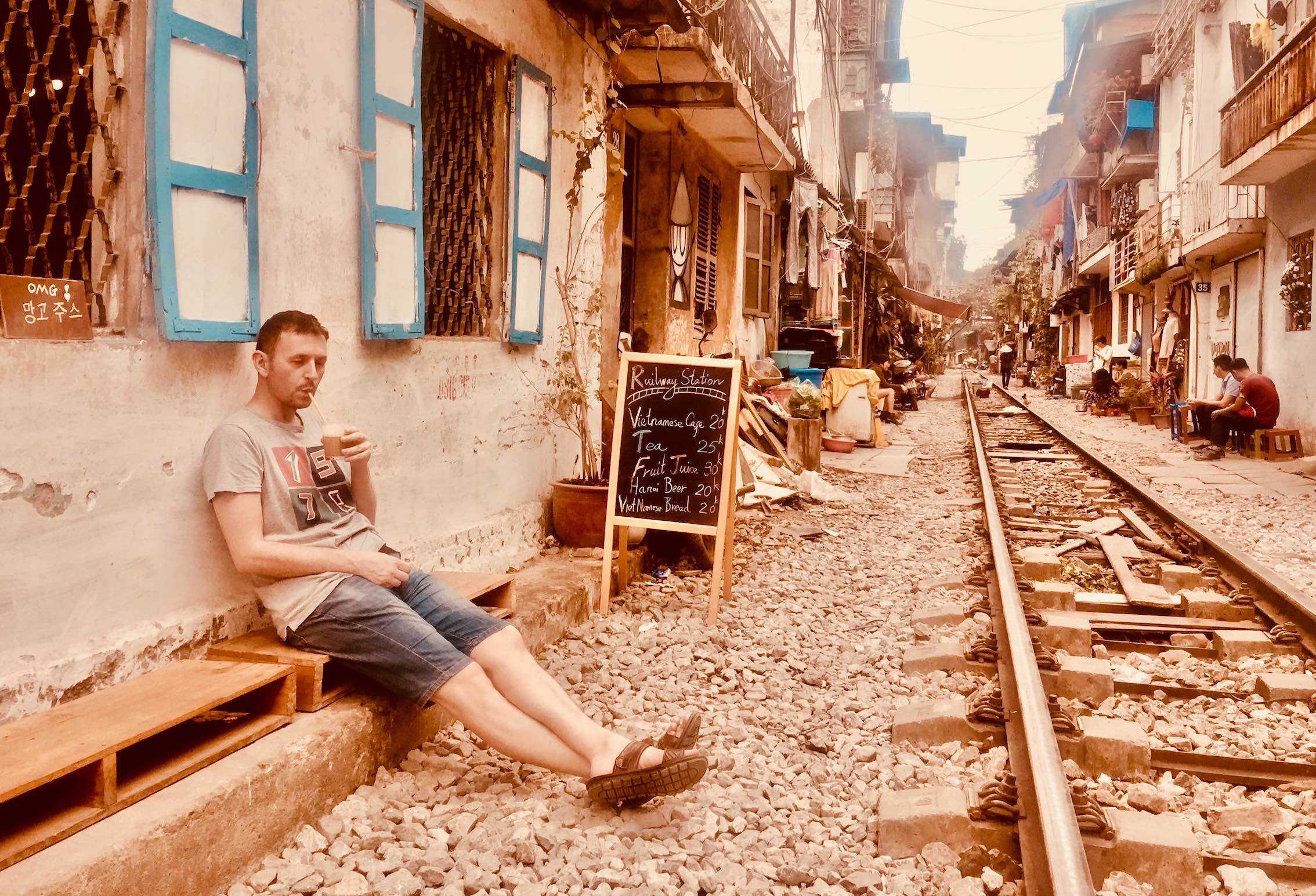 At The Tram Cafe.

I had barely walked a quarter of the street when I came across the first of two cafes. It was as if god himself had put them there, just for me. Hence I settled on one of the wooden benches outside the Railway Station Cafe. Within a minute or two a young bespectacled twenty something appeared to take my order. “Mm, what’s good?” 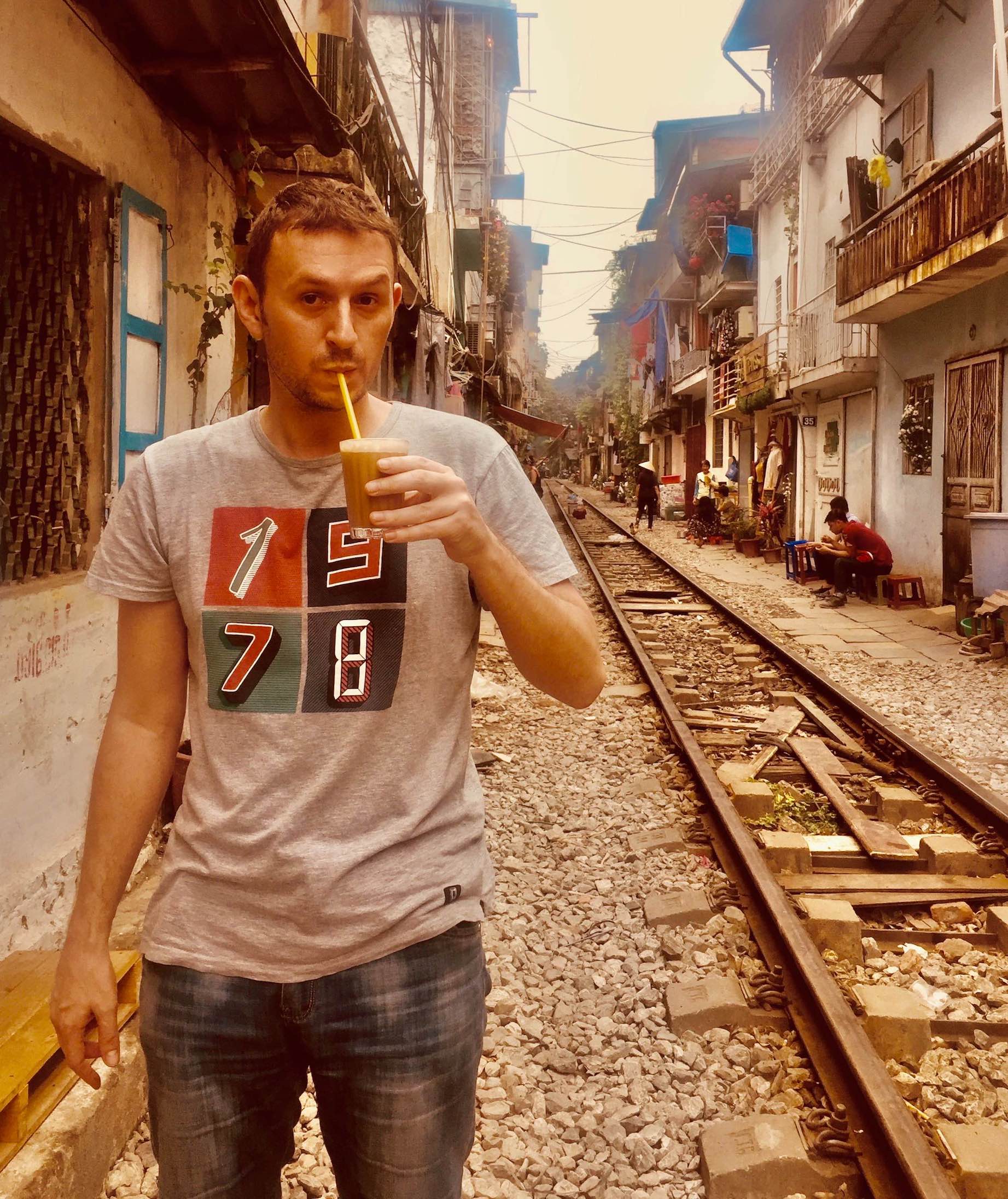 It was all good of course, or so he claimed. In the end I went for a creamy and sweet Coconut Iced Coffee, and was not disappointed. In fact, I sat outside the cafe for around half an hour marvelling at just how peaceful the street was. You know, when there isn’t a giant train grating through it. 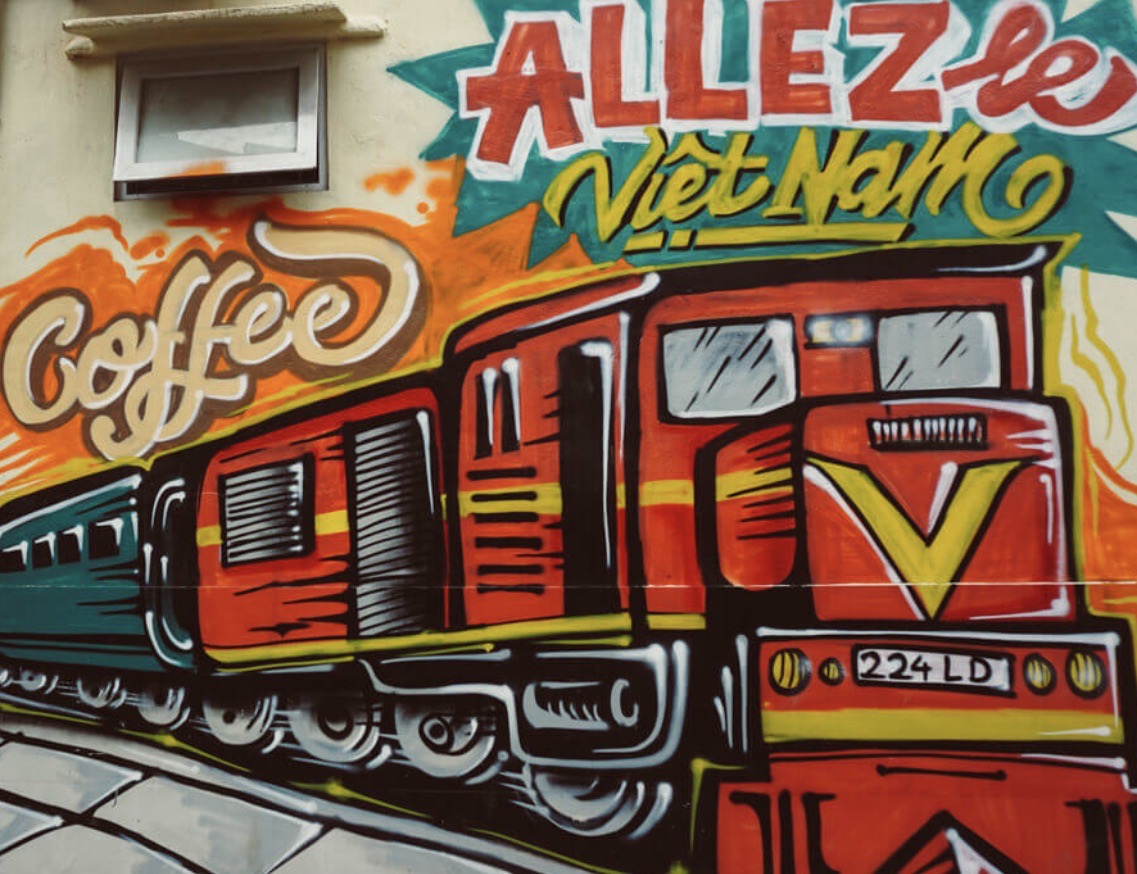 Ready to resume my explorations, I continued down the street taking in some of the charming works of art painted directly onto the buildings. Indeed the street had become a popular place for local and foreign artists to come and leave their mark. 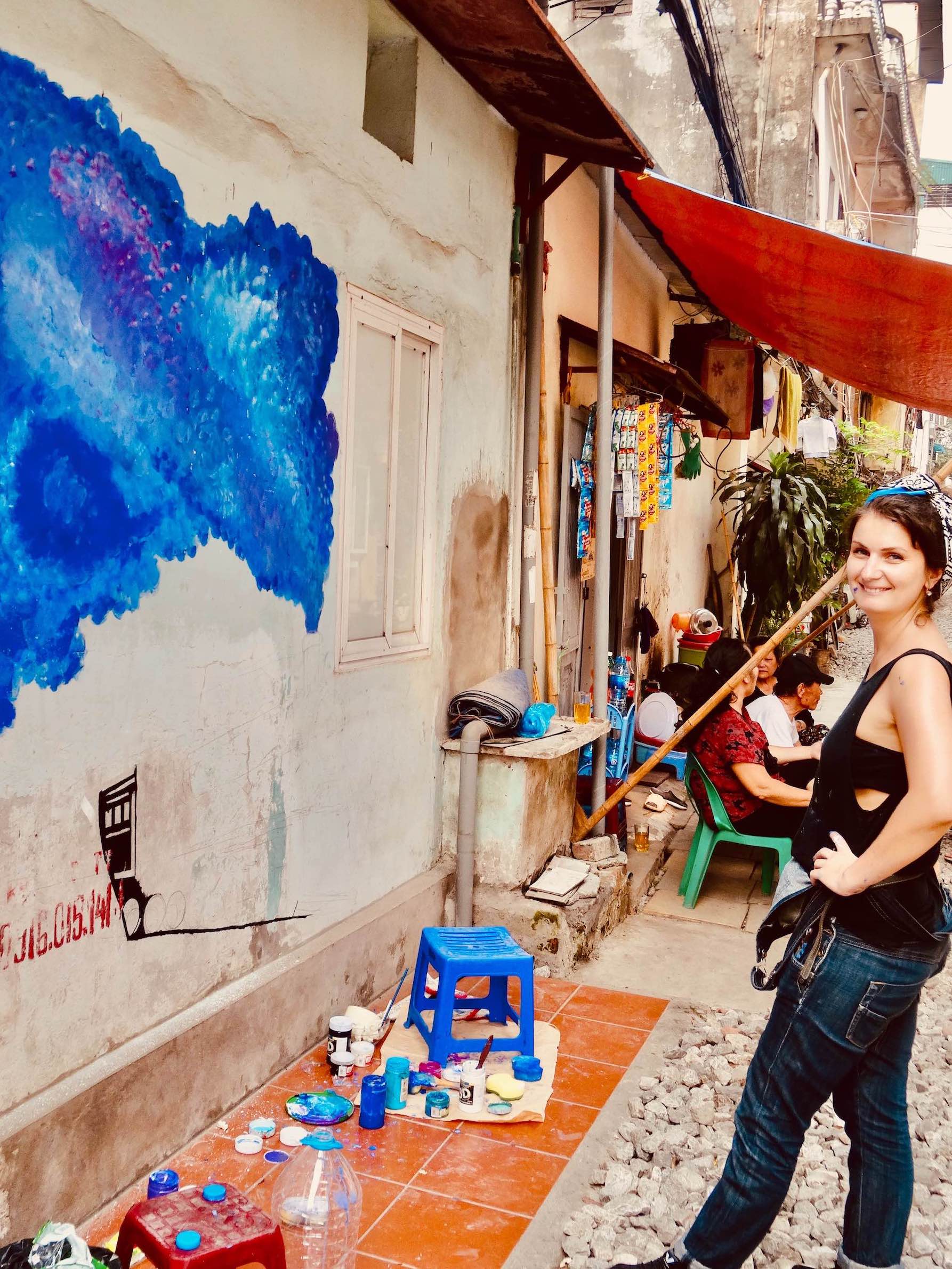 As luck would have it, I met a street artist at work that very afternoon. If my memory serves me well she was a Ukrainian woman travelling around Asia doing murals. “I’m gonna call it Galaxy Train”, she said, with a warm smile. Behind her, looking on with a palpable degree of apathy, was a local family who live on the street at the back of their small store-restaurant. 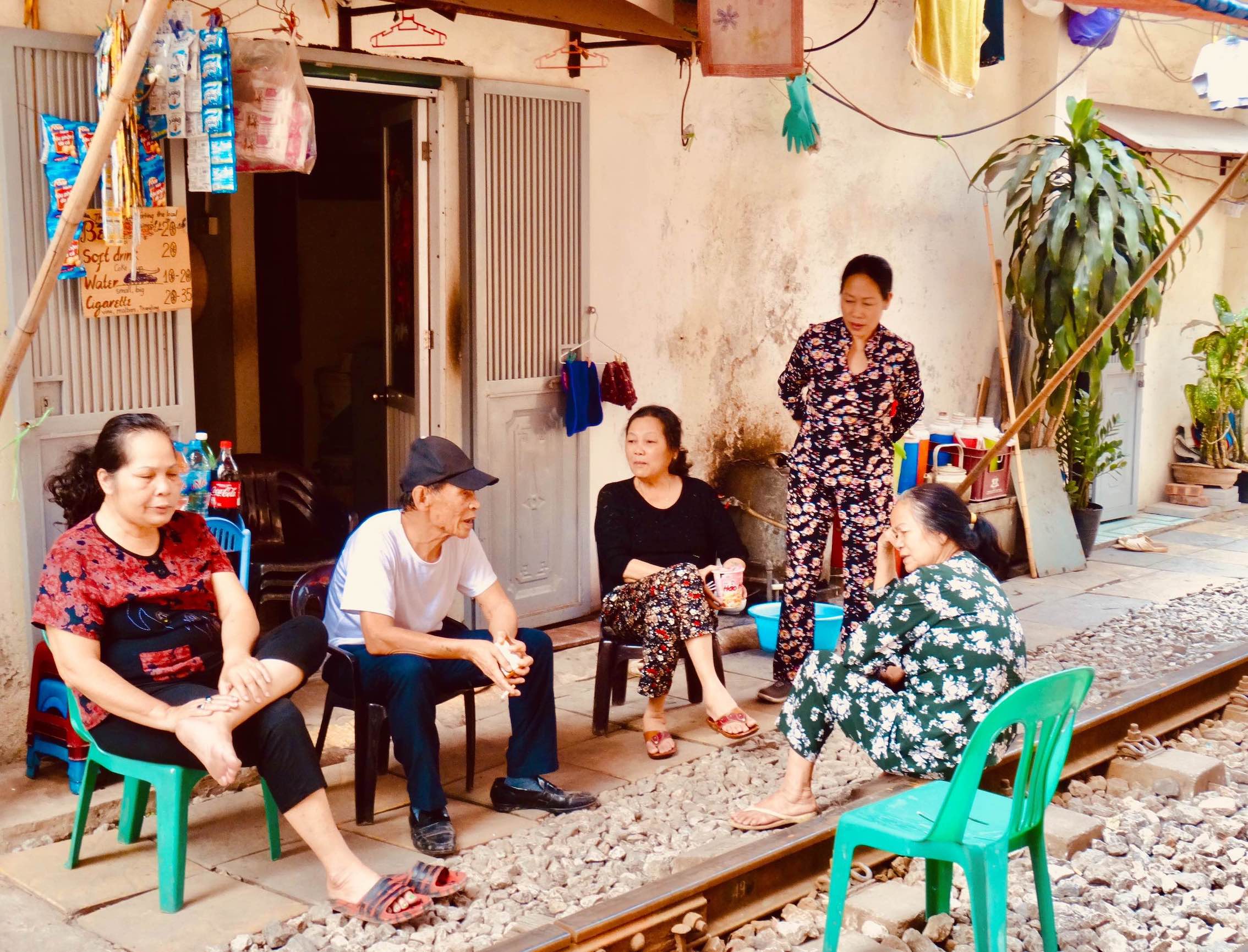 “What do they think of your painting?” I asked, almost a little mischievously. “Mm”, she mumbled through pursed lips, “probably not much”. There was an extended silence before she spoke again. “This family has lived here for generations. Change can be a hard thing. Thao… from the Railway… she tried to make friends with them. Tell them that we can all support each other. But they’re not interested”. 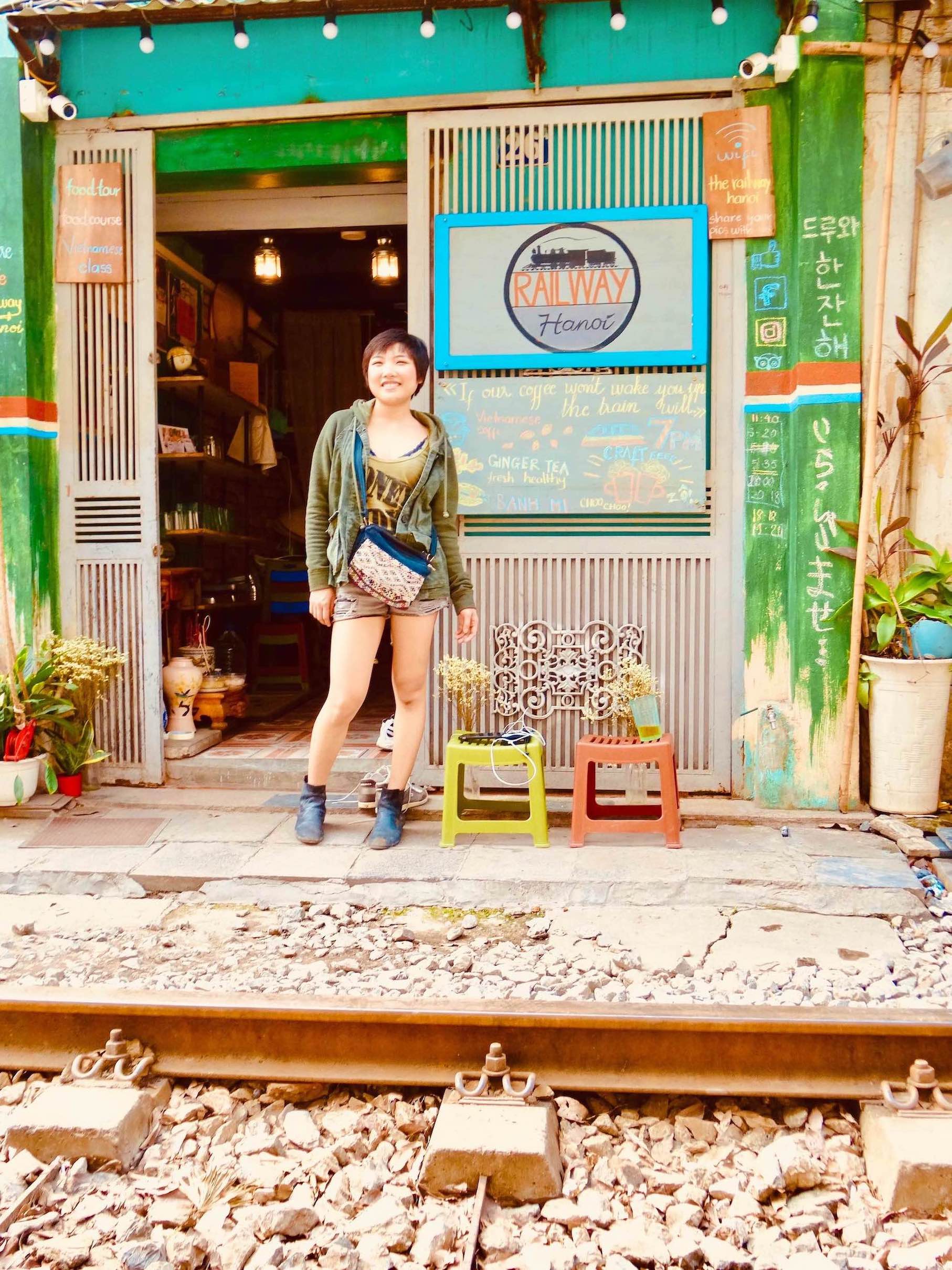 Thao Quach, aka The Choo Choo Lady, runs another of the street’s coffee joints, The Railway. Born in Hanoi, she’d arrived in Train Street just four months prior to my visit to launch her business. According to Thao, her inspiration had come from bumping into a group of tourists one day while she was cutting through the street.

They were trying to find out what time the train was passing through, but none of the locals could speak English. Thao says she could see how excited they were and how much it meant to them. This set the cogs in her head turning. “And here I am!” she grinned. 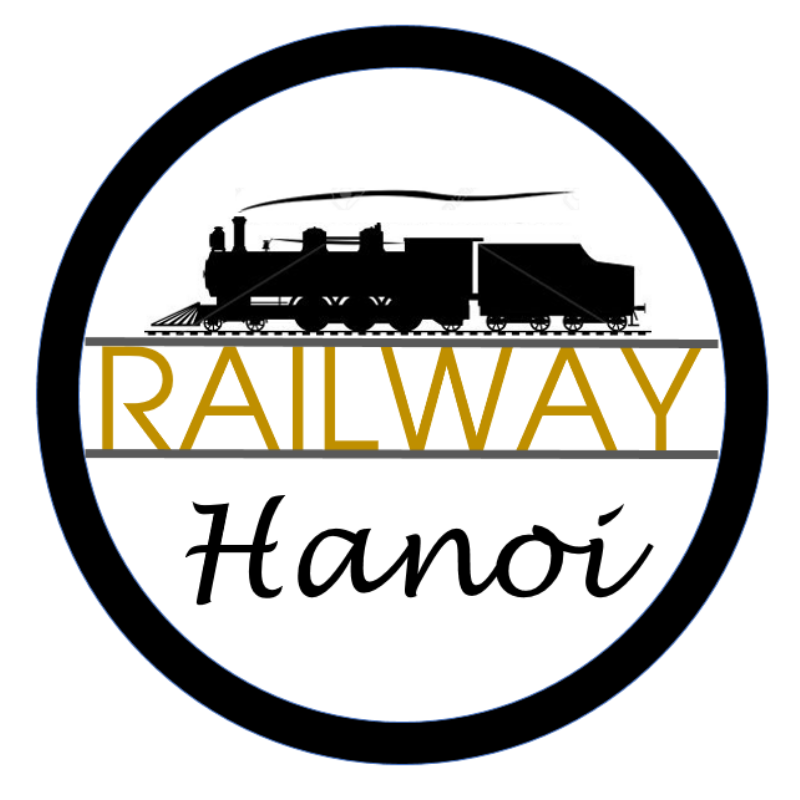 The Railway was the first cafe to open on Train Street. First they offered coffee, in addition to a full range of cold drinks and nibbles. Next, Thao began developing various social projects in order to share her success with the local community. It was Thao, I learned, who was behind most of the art. She also set up a volunteer program to teach the street’s children some basic English.

A Small Cafe with a Big Heart. 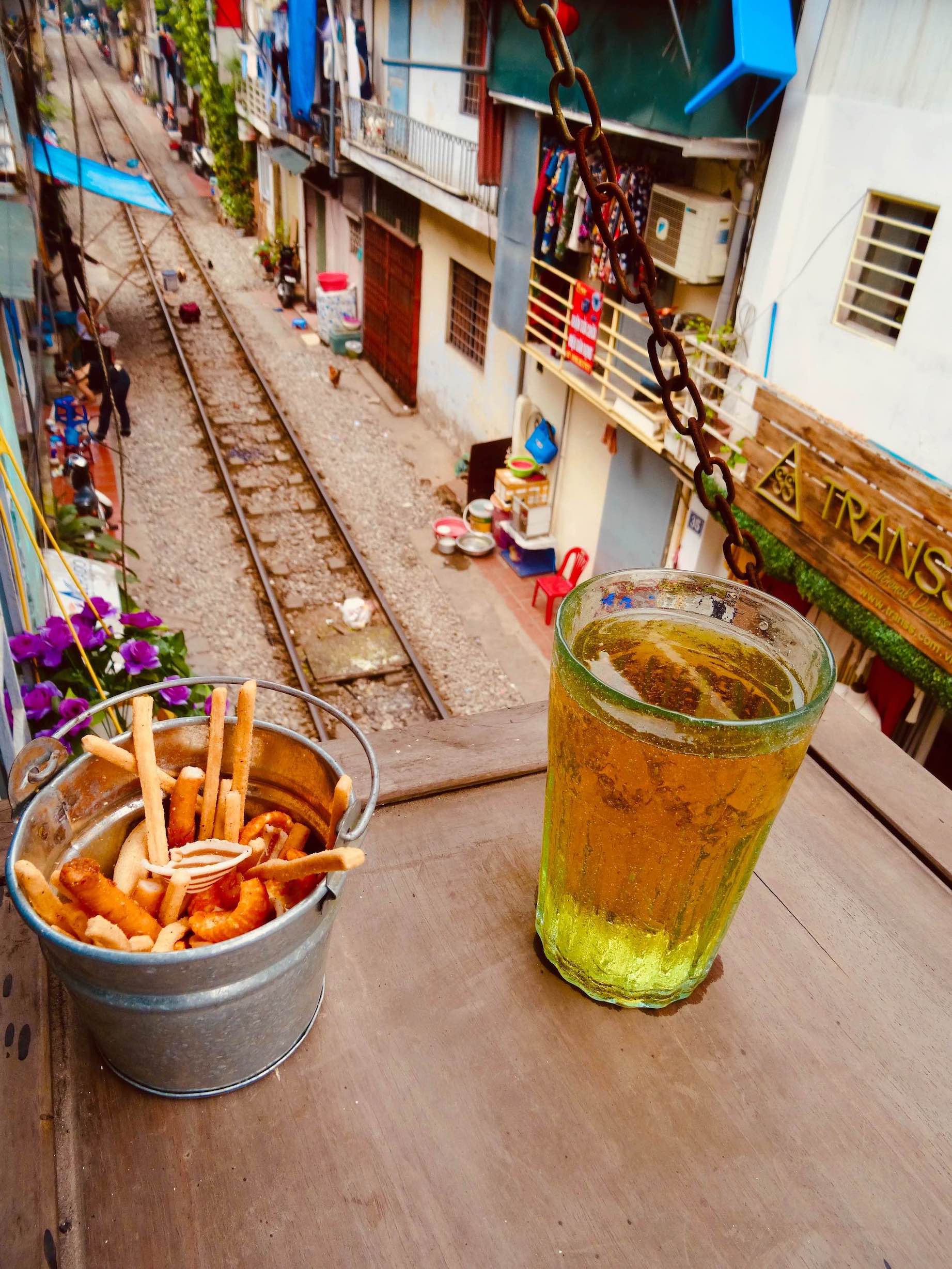 On the balcony at The Railway.

I chatted with Thao for a bit up on The Railway’s first floor balcony, my seat offering a choice view over the rails. “We’re also gonna arrange for free business advice to all Train Street residents” she said, chewing her lip. “For those who want it”.

Unfortunately, I had missed the last of that day’s afternoon crossings. “You have to see the train!” she insisted. “Come back tonight! You will even get your own certificate”. That last part confused me somewhat, but definitely felt intriguing. 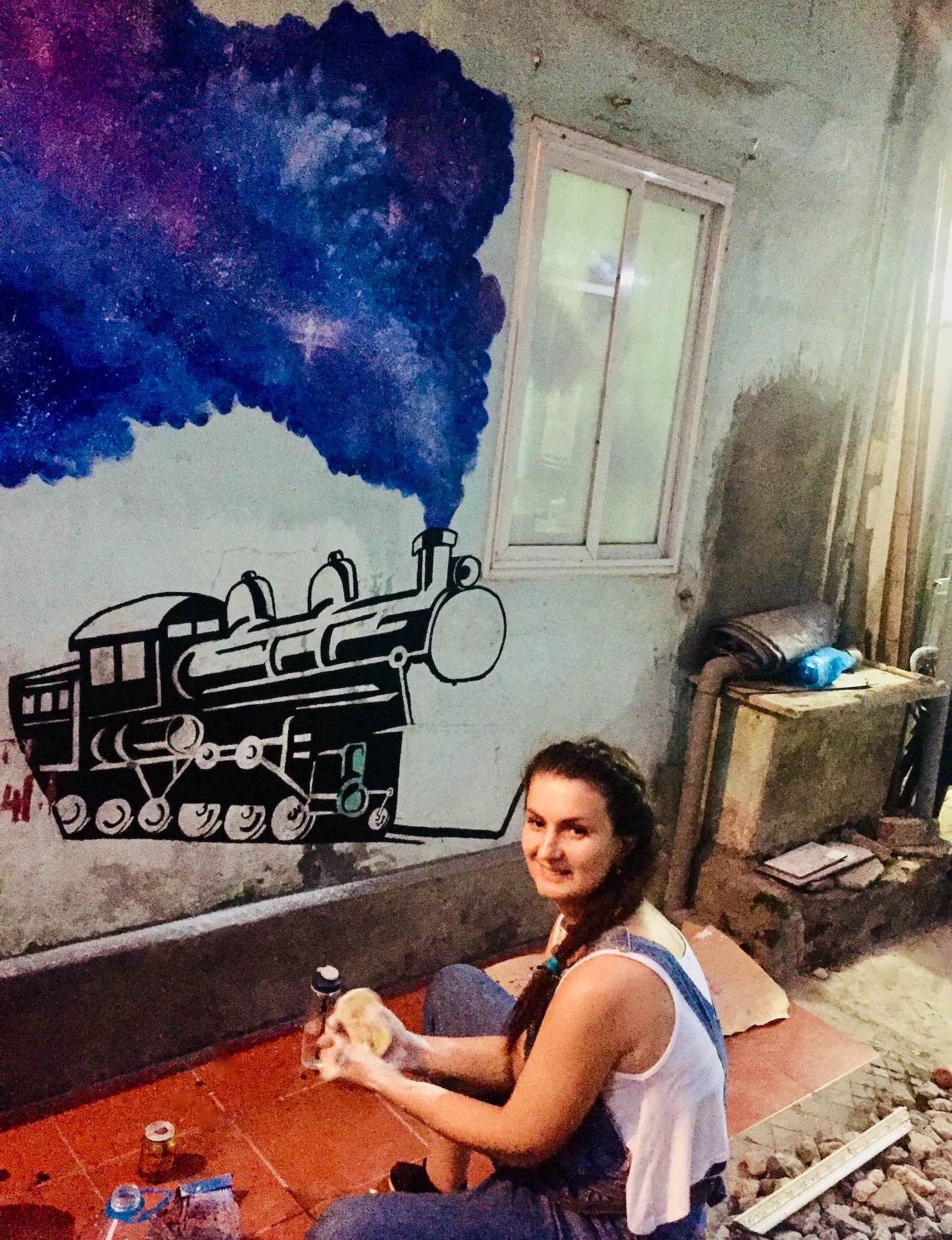 Thus I took Thao up on her offer to return for an evening train crossing. After a nap and some dinner at my hotel, I came back to find the street positively buzzing. There were perhaps twenty people of all nationalities sitting outside The Railway drinking and eating at plastic tables and chairs at the side of the tracks.

I also saw how much progress the artist had made with her Galaxy Train. “Almost done!” she said, wiping her brow. “But now I’ll take a break, the train is coming soon”. “Choo Choooooooo!” cried Thao from the entrance door of The Railway. “The train is coming guys! Please help me clear the tables and chairs”.

Everyone pitched in to clear the way. Following Thao’s instructions, we all stood as far back as we could, backs pressed against the walls of the buildings. The rails began to vibrate. Then came the low rumbling of an engine somewhere in the distance.

When the train eventually arrived I was struck by how it inhabited the street. And for a brief terrifying moment I actually doubted whether we were at a safe enough distance. But of course we were, the hulking beast grumbling harmlessly by at a steady pace as passengers waved at the onlookers. It took the train maybe a minute to pass through and as it chugged away the assembled group broke out into sporadic applause. 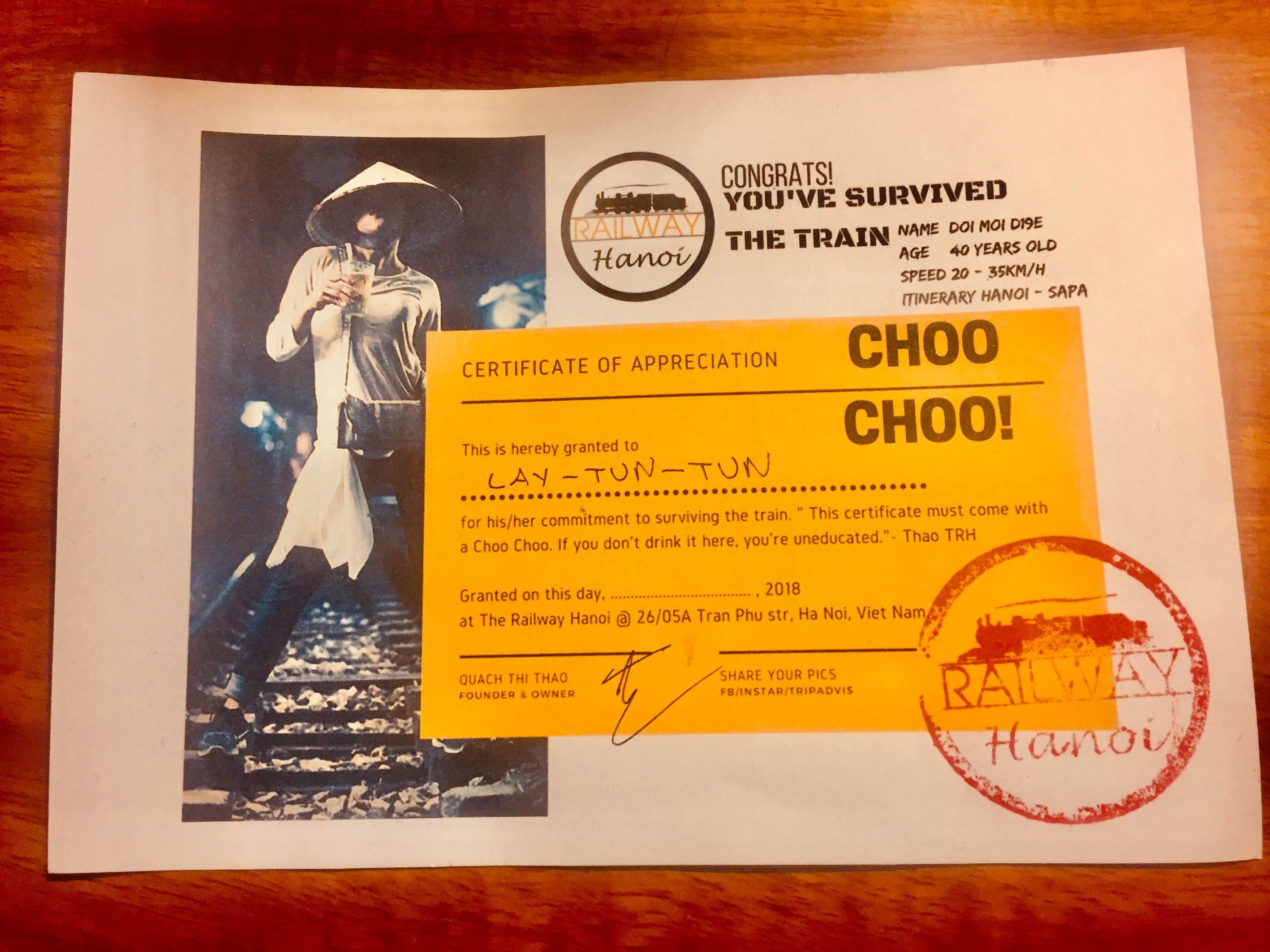 True to her word, Thao presented me with a cute homemade certificate. In fact, everyone got one. I had survived the Hanoi Choo Choo! Phew, a tale to tell the grandkids I’ll never have.

Hanoi’s Train Street became more and more popular over the next year. Before long, they’d become overpopulated with streams of tourists and selfie taking teens. In October 2019 there were so many people on the tracks a train had to be rerouted, an incident which caught the attention of the government. 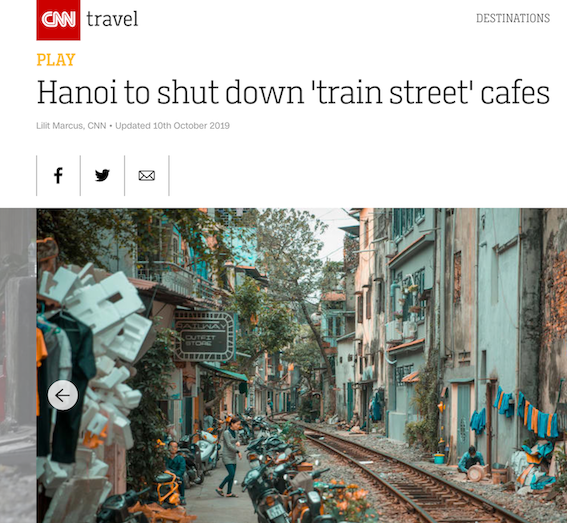 Sadly for Thao and friends, the authorities issued a temporary closure order on Train Street cafes due to safety concerns. Then came the pandemic and its restrictions, which killed off Hanoi’s cafe scene altogether.

But then, in November 2020, a few began reopening. From what I can see the government hasn’t lifted the order. Rather, they’re turning a blind eye because of the general lack of tourism in Vietnam. On Google The Railway is listed as permanently closed. Or maybe Thao is just flying under the radar, who knows. Whatever the case, I wish her all the best in these tough times. Choo Choo!!!