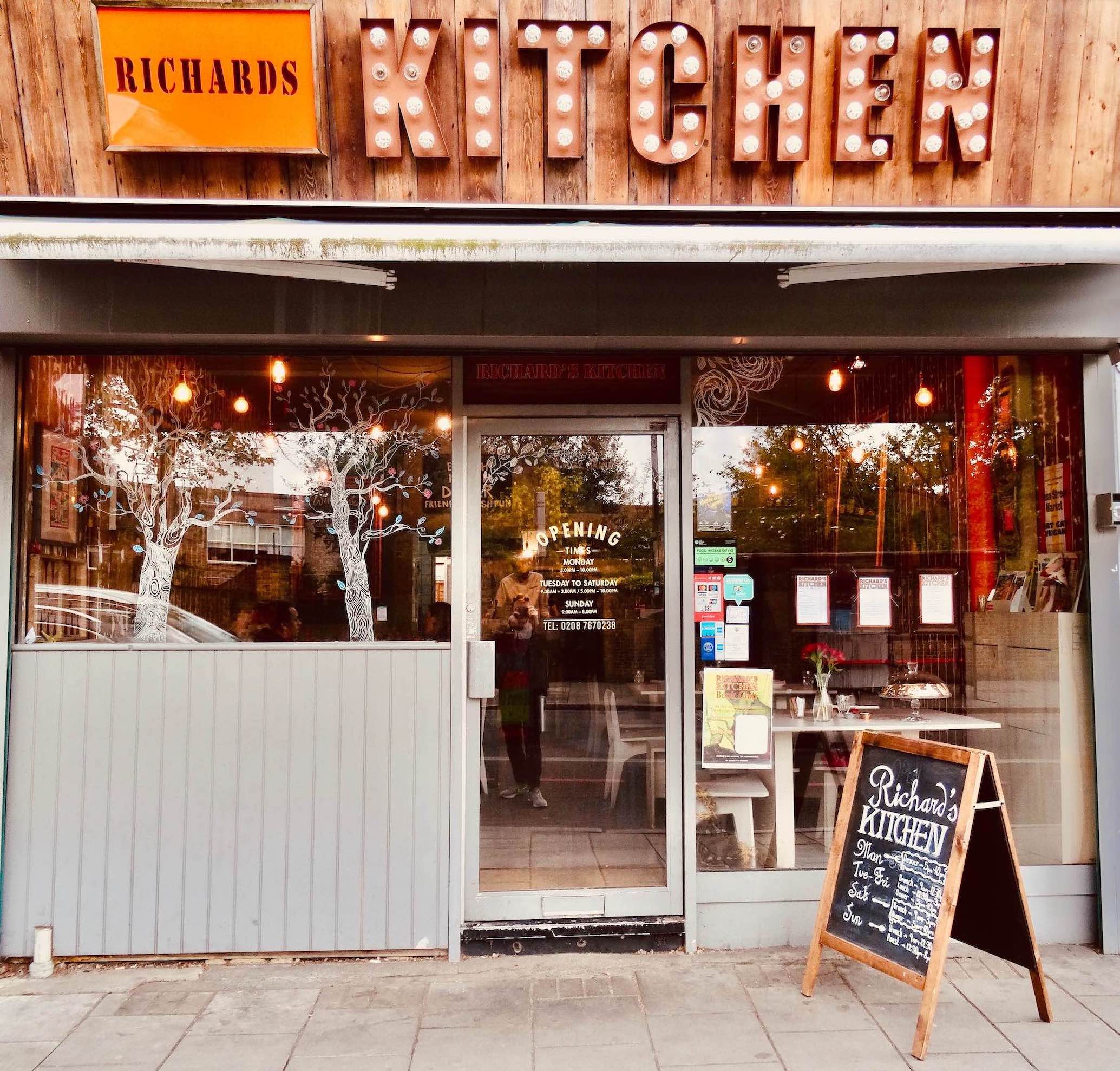 May 2019. It was a sleepy afternoon in Tooting Bec and Henry and I were in the mood for a Sunday Roast. In fact, I hadn’t had an English roast in over two years! As good as the food is in China, they’re not so shit hot when it comes to Yorkshire pudding.

I had assumed we would hit one of the local pubs. Perhaps The Rose and Crown, or maybe The Wheatsheaf. But then Henry hit me with a curveball. “Richard’s Kitchen does a good Sunday roast” he said, tapping away on his MacBook. “It’s a tiny place, but the food’s decent”. In all my time in Tooting Bec I’d only really been half aware of Richard’s Kitchen, an eatery I’d passed countless times walking up and down Tooting Bec Road. 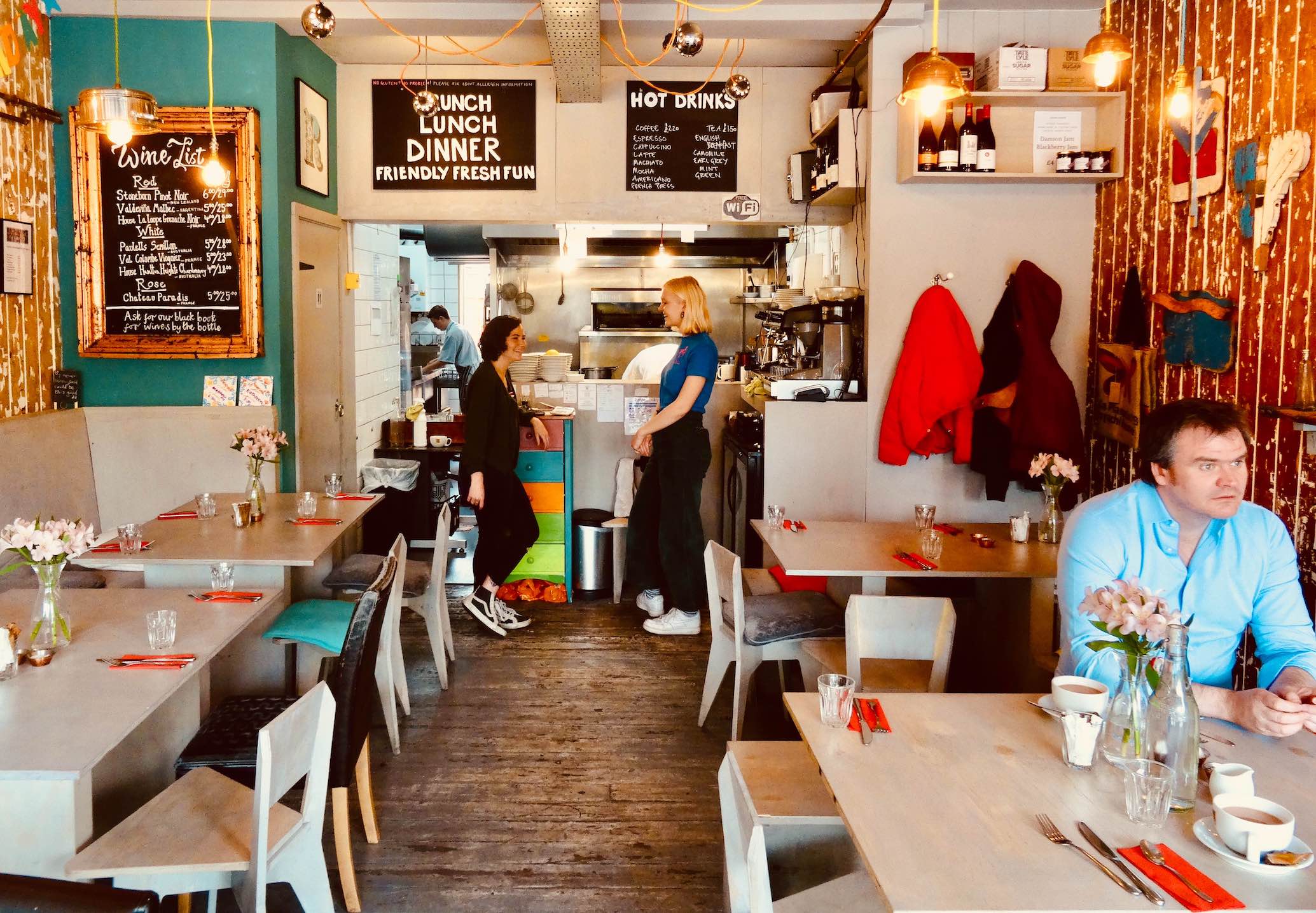 I certainly had no idea that this was one of the neighbourhood’s best Sunday roast spots. It took us just four minutes to get there from Henry’s house on Elmbourne Road. It was early afternoon and happily (for us at least) we found the place empty. Having our pick of the tables, we settled down and the breezy waitress strode over with a pair of menus. 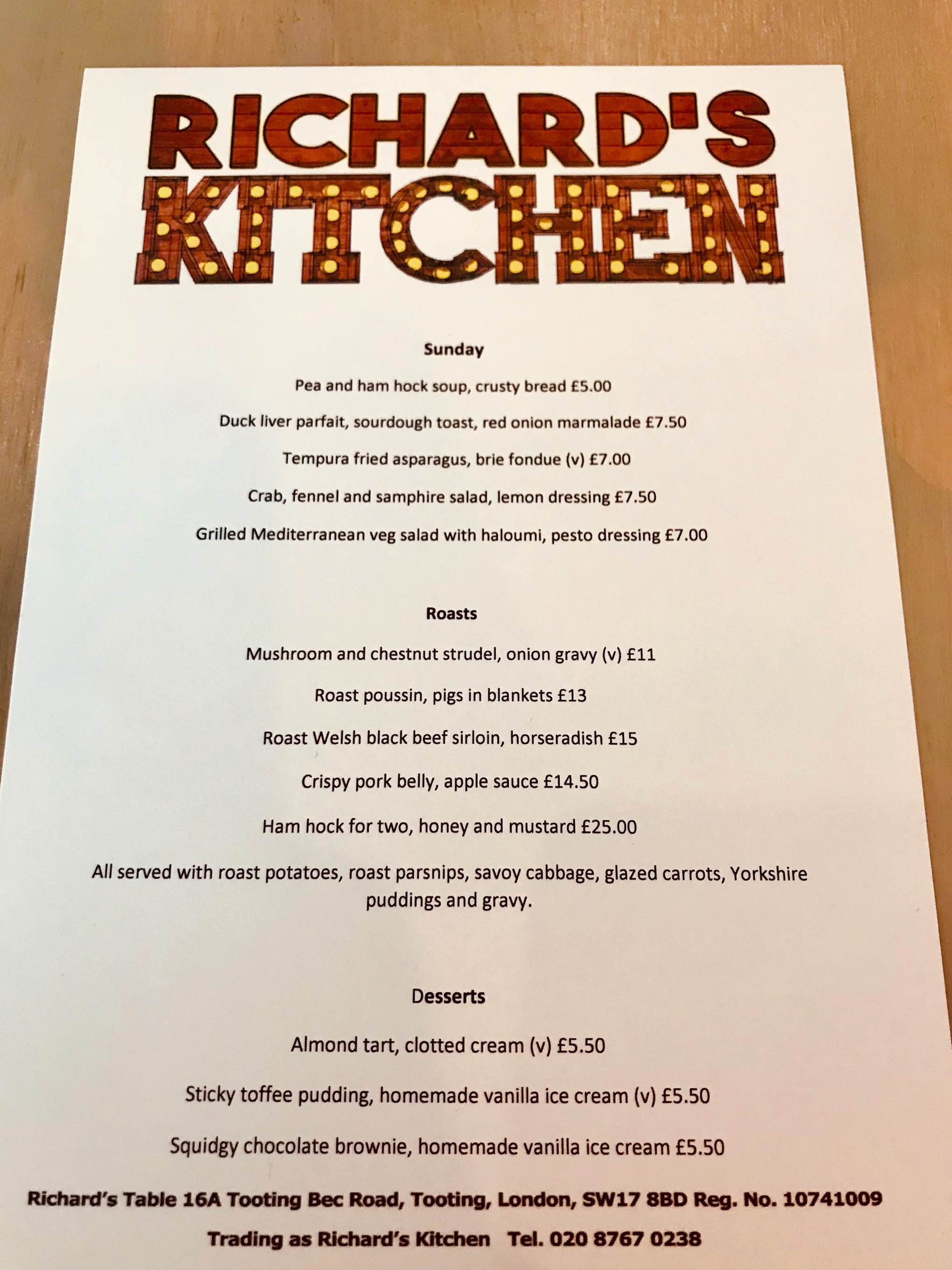 According to their website, Richard’s Kitchen specialises in classic British dishes with modern, global twists. Moreover, there is a firm focus on the freshest local ingredients, while Richard goes to great lengths to ensure the menu is ever changing. 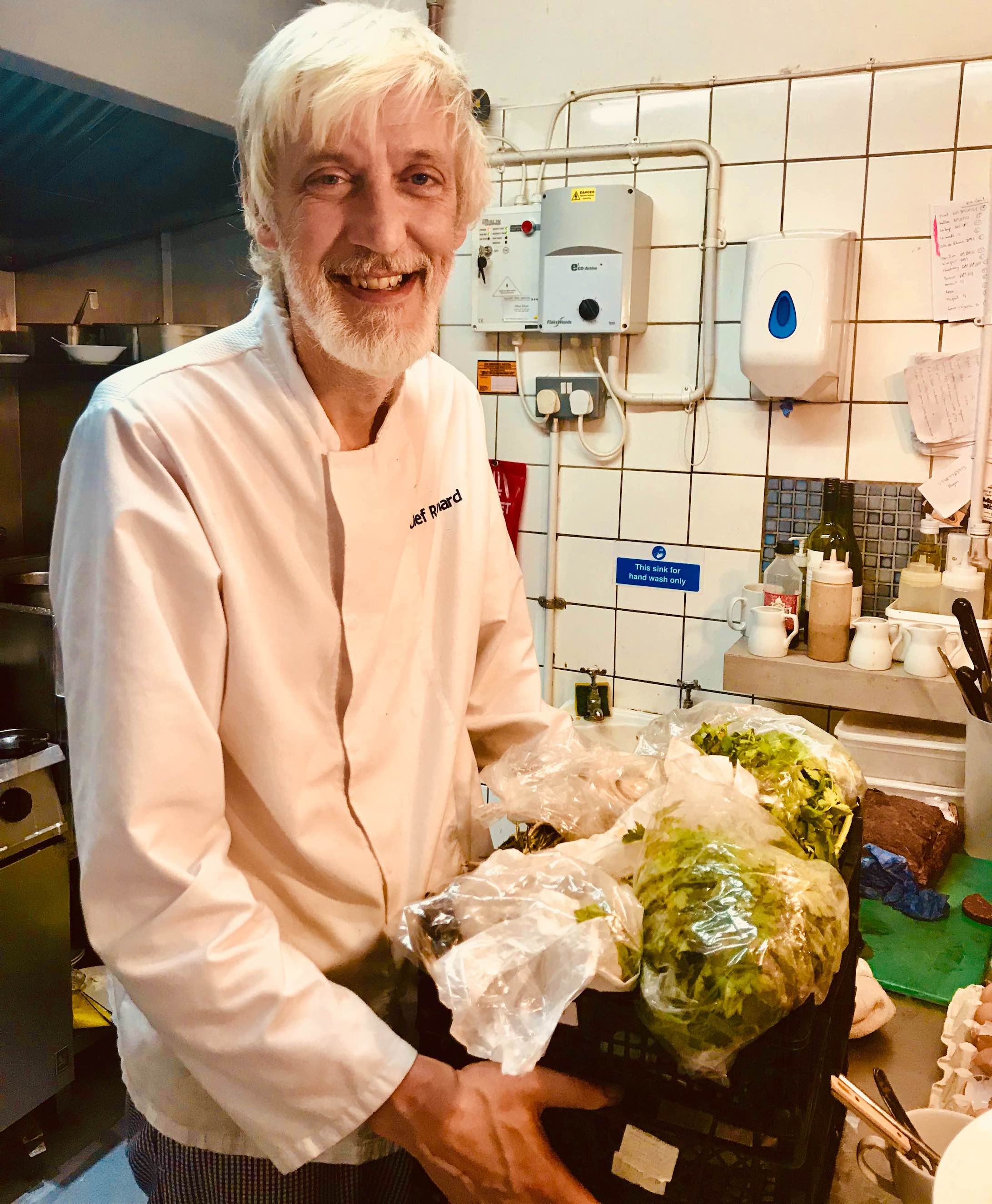 After ordering, we were graced by the presence of Richard himself, who came cheerfully helloing through the main door carrying a bulging tray of vegetables. With a rare quality of being somehow hairy and fresh-faced at the same time, he cuts an affable figure. Watching him converse in a fatherly way with his small team, I instinctively felt that our Sunday lunch experience was in good hands. 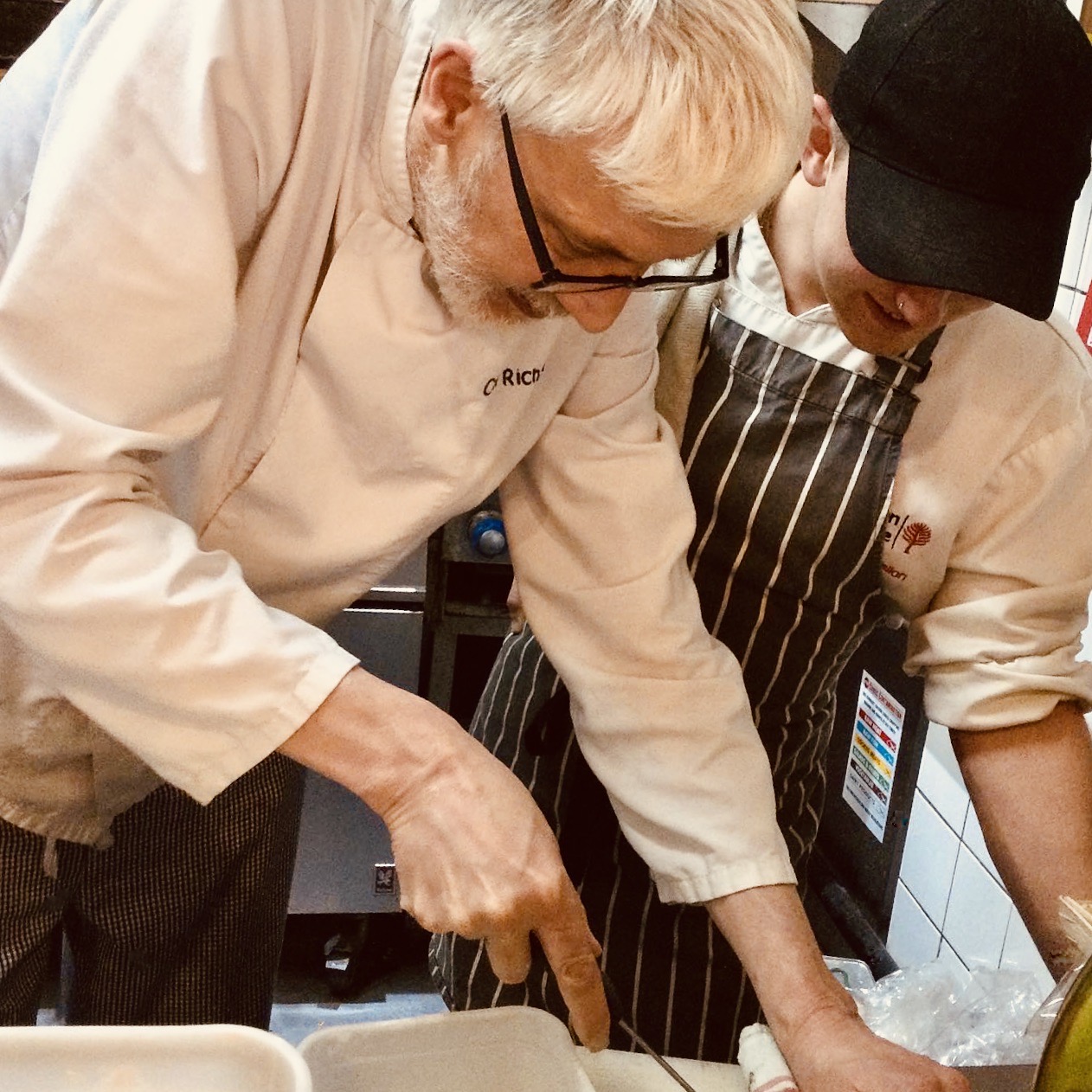 A Tooting Bec resident for over twenty years, Richard Underhill’s love for cooking came from his mother, a talented chef. However, it wasn’t until he was a young gap-year-young-man that he started dabbling in the kitchen himself. Among his first dishes, a simple plate of fish fingers and an altogether more daring blackcurrant sorbet!

Later, in 1989, Richard completed a prestigious Cordon Bleu course and built his reputation as a cook in a variety of restaurants and hotels. Finally, he realised his dream of opening his own restaurant and catering business with the launch of Richard’s Kitchen. 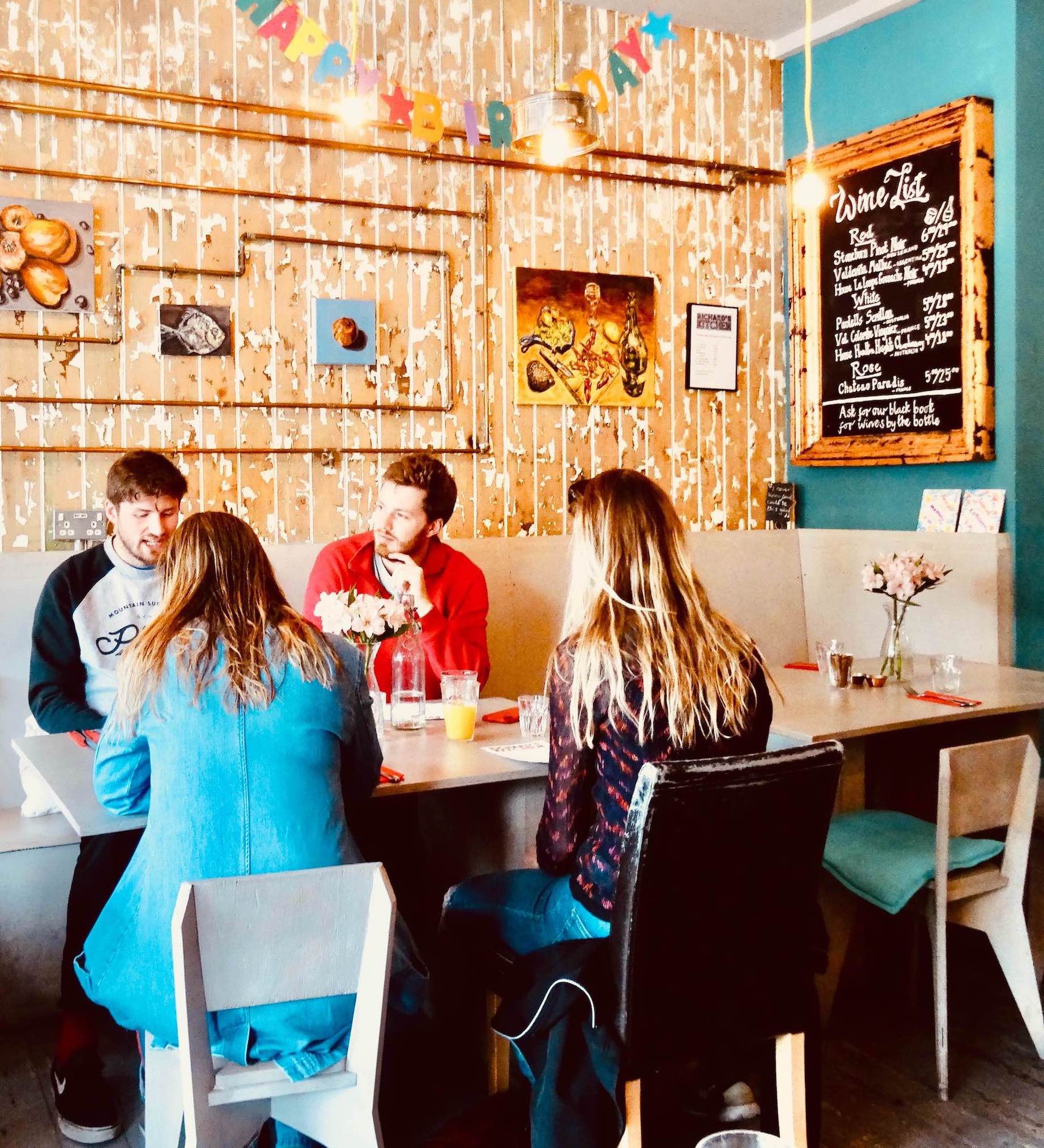 While Henry and I worked on a pot of Earl Grey tea, the Sunday roast crowd began to gather momentum. We had timed our visit perfectly it seemed, with our dishes arriving before the first group even ordered.

Where to Eat in Tooting Bec. 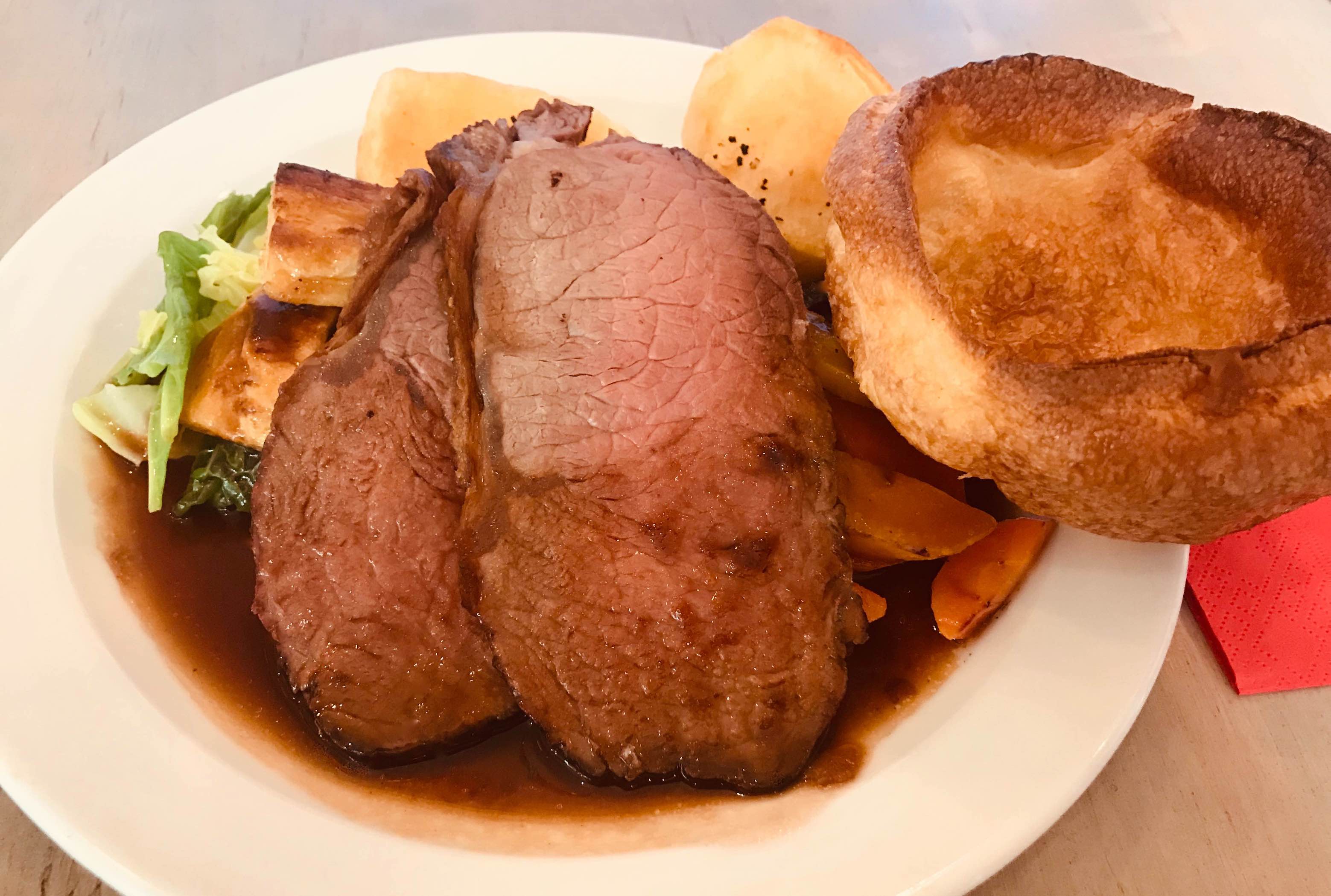 With such a wonderful array of Sunday roast options, I half wondered if I’d made the right choice. But just one bite of my delicious Roast Welsh Black Beef Sirloin set me at ease. Beautifully presented, soft on the tongue and oozing flavour, it went down a treat. As did the accompanying carrots, horseradish, roast potatoes, Yorkshire pudding and gravy. The dish is priced at £15, not too bad for London. 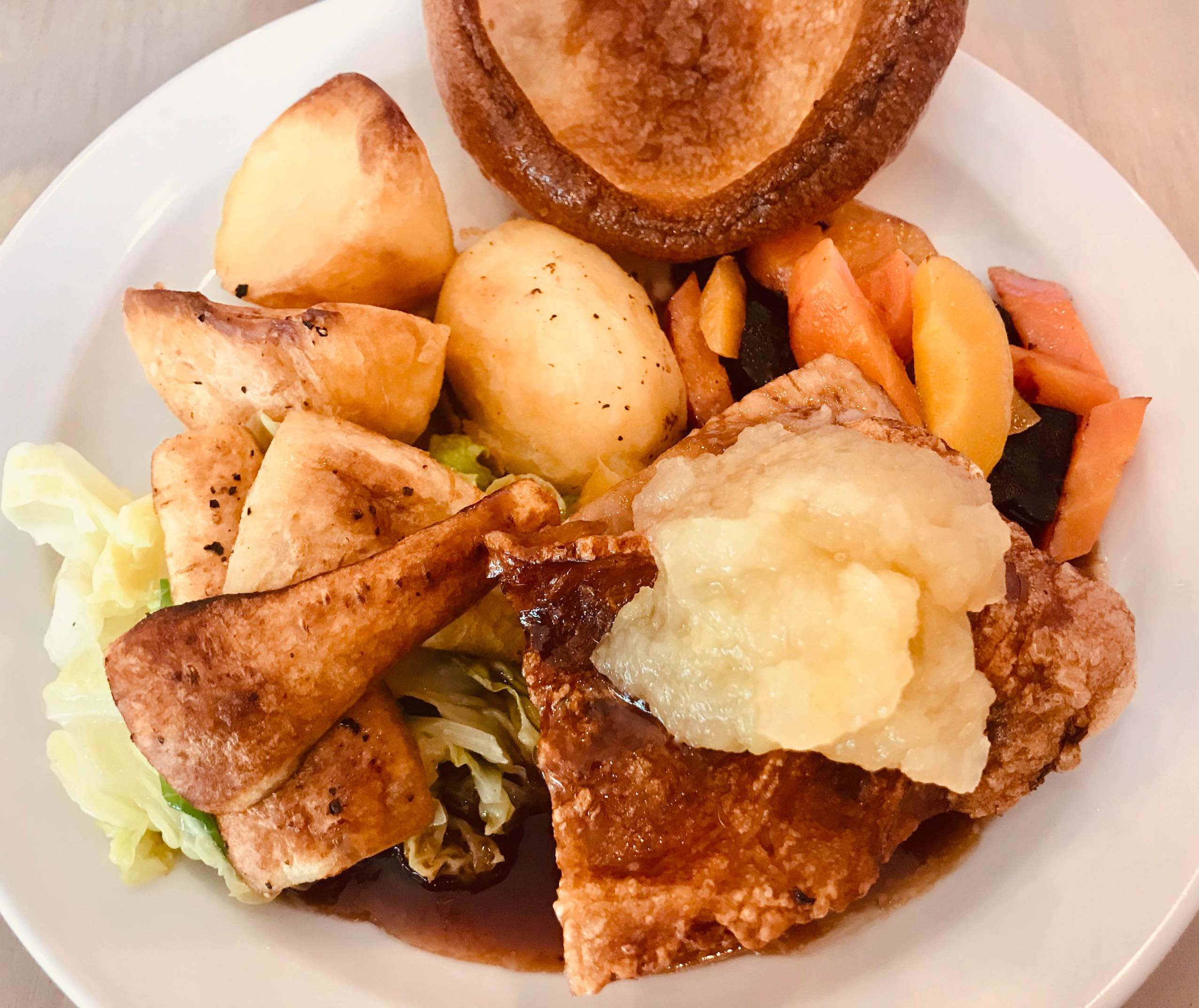 Henry’s dish looked similarly top notch. He went for the Crispy Pork Belly with Apple Sauce. Also with Yorkshire pudding, carrots, roast potatoes and gravy, but with cabbage rather than horseradish. This one goes for £14.50. 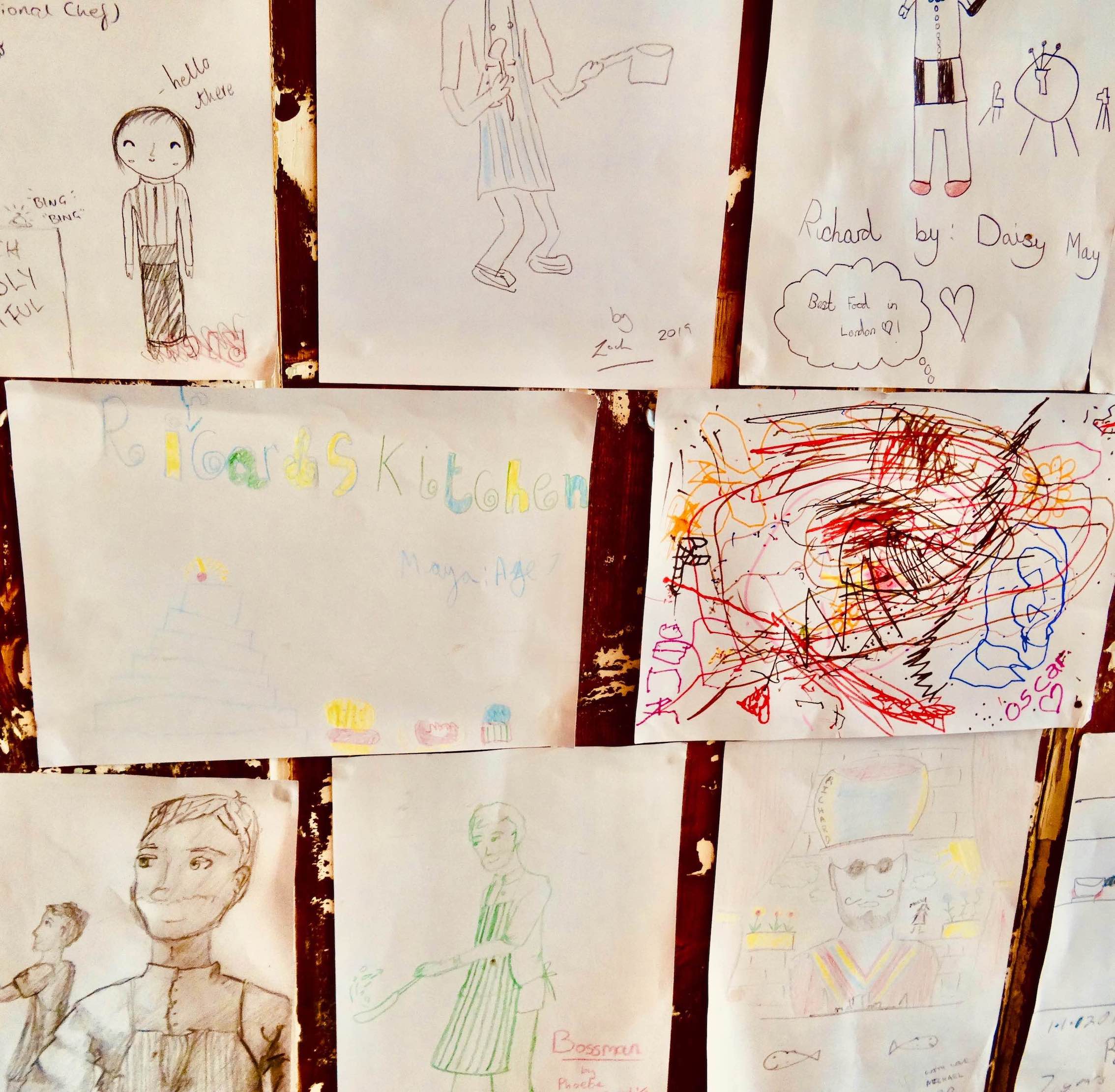 Polishing off the last few carrots, I found my attention drawn to an arty section of the restaurant wall. Endearingly, it’s a little montage of children’s drawings depicting both Richard and his restaurant. Looks like he’s a bit of a local hero. 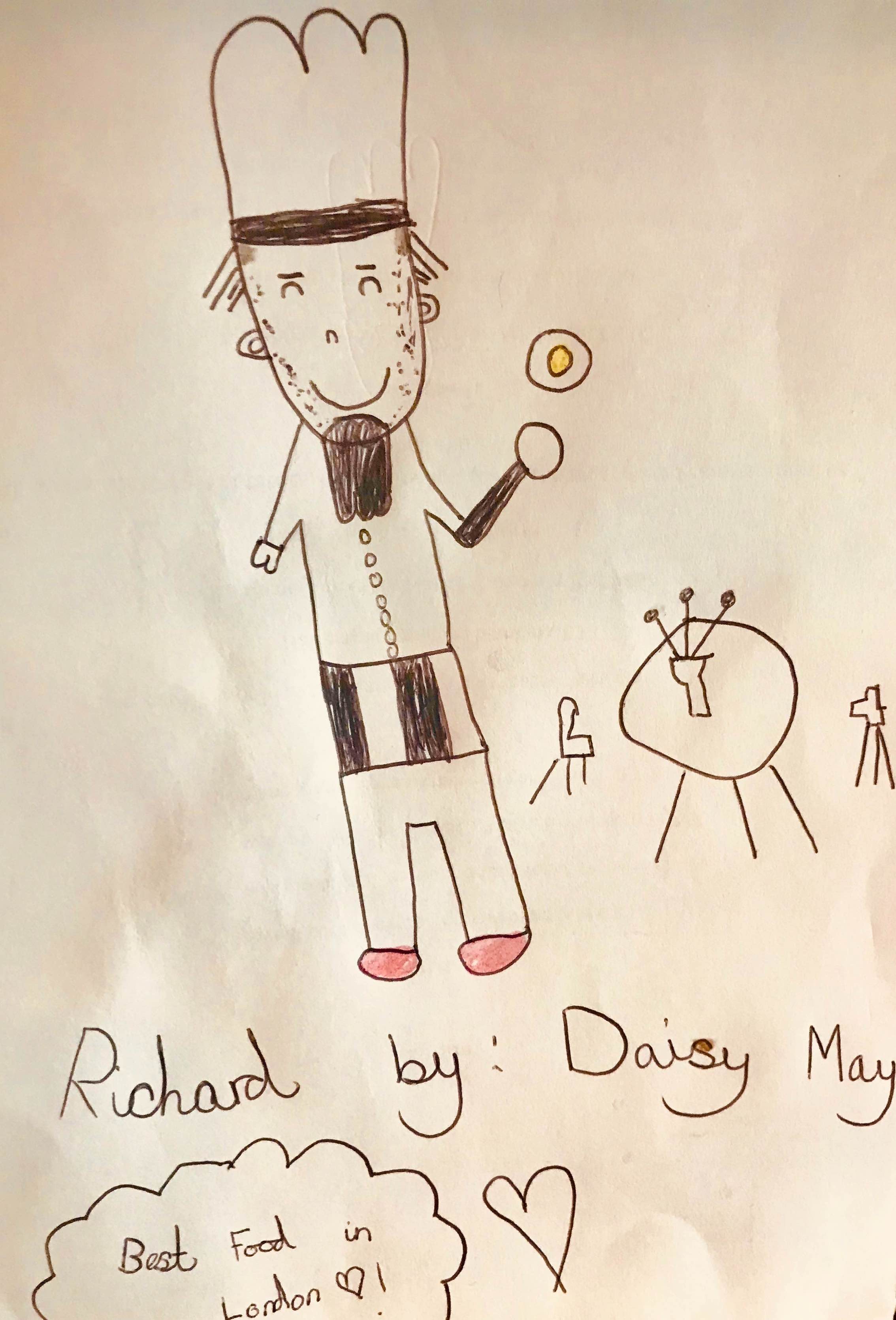 Before leaving, we had a quick chat with Richard in order to pass our compliments on to the chef. When I asked if I could take his photo for this blog article, he kindly agreed. But only if I made it a group shot of the team. Seemed like a fair trade. 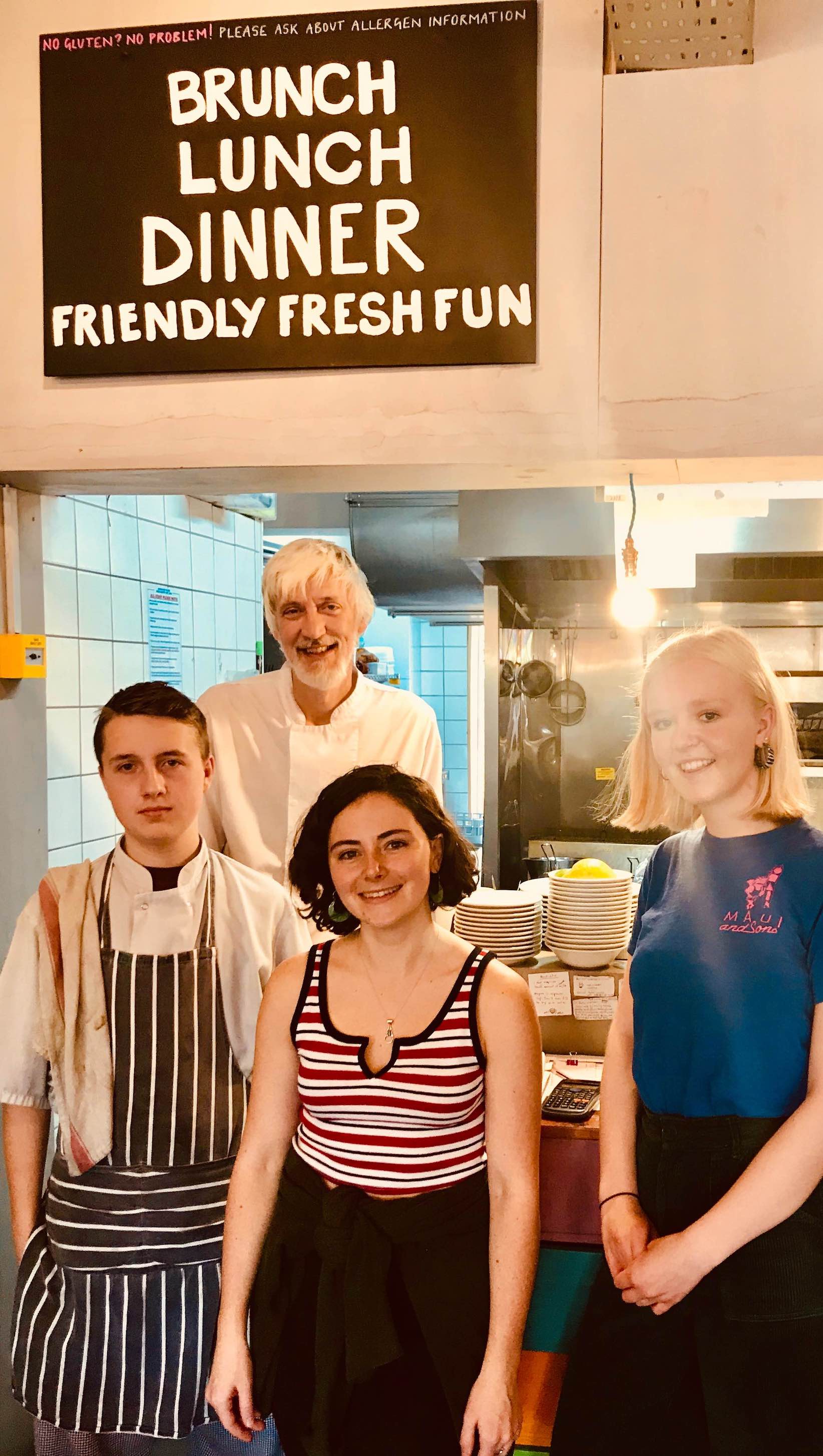 When in Tooting Bec… do go and treat yourself at Richard’s Kitchen. The food is great, competitively priced and there’s a laid-back, intimate feel to the joint. For more info and the full lowdown on his latest dishes, head for the website.

Like this? I’ve written more travel reports from Tooting Bec.