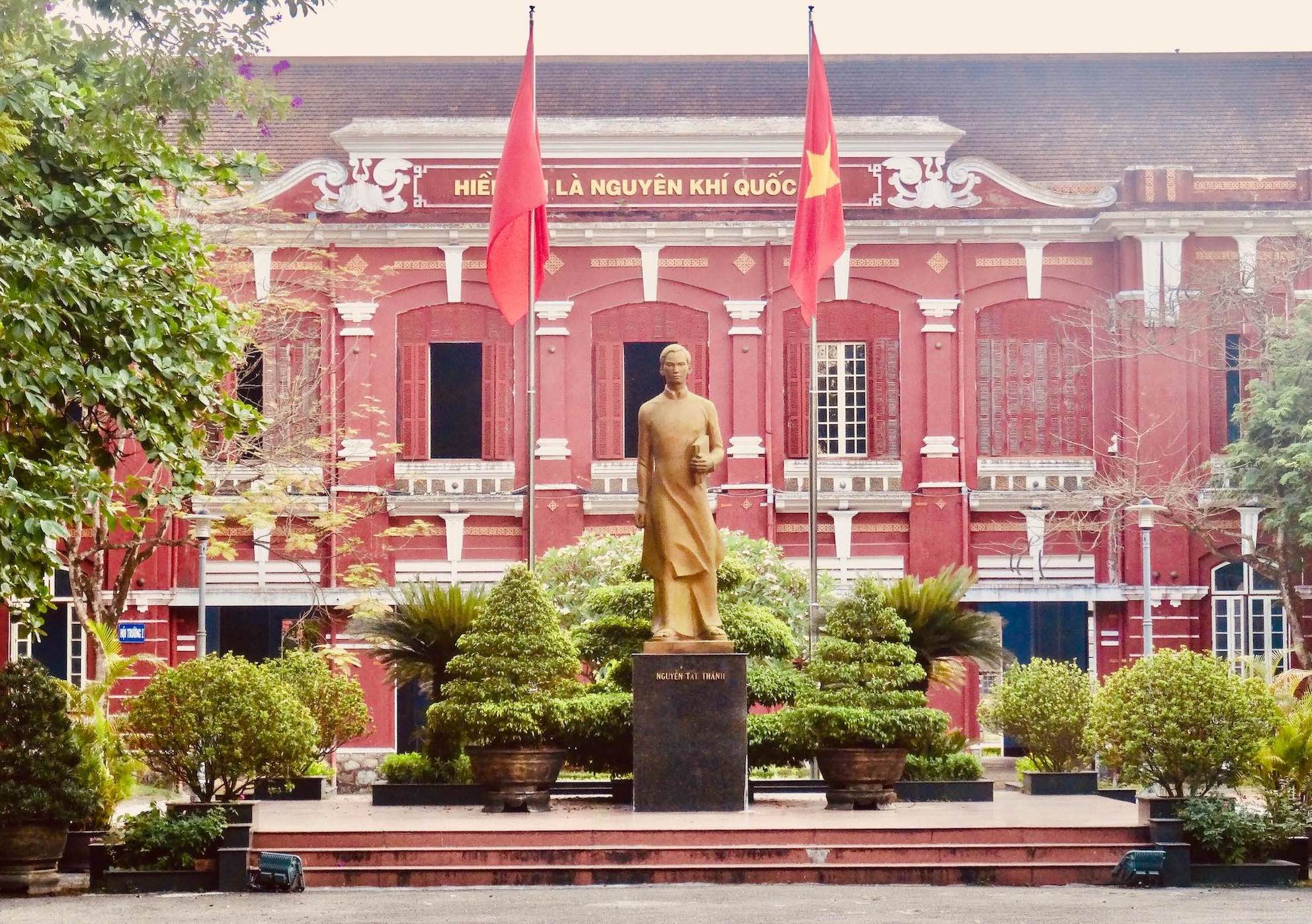 It was my second full day in the Vietnamese city of Hue and I was felling a little run down. By this point I’d been on the road for several weeks. And my legs were feeling the effects of the previous day’s efforts exploring the majestic remains of The imperial City.

Thus I decided to sleep in, before wiling away the afternoon in a number of local cafes. After consuming a startling amount of caffeine I figured I was ready for… something. Consulting my trusty travel notebook, I found myself drawn to the words National School. Ah yes, another truly unique Hue sight that I’d been curious about for months in the buildup to my Vietnam trip. 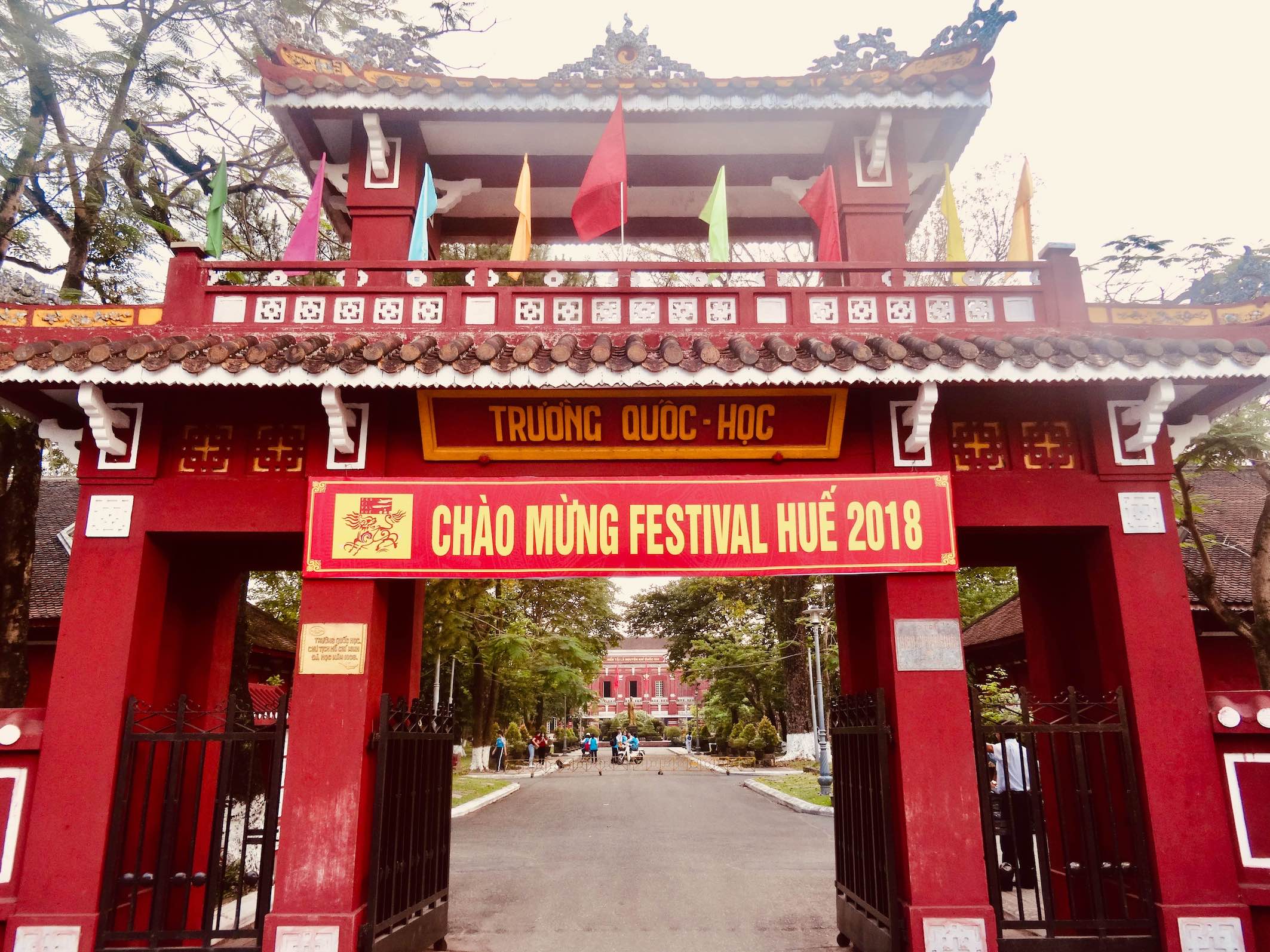 Vietnam’s most famous high school was not difficult to find. In fact, it was a straight shoot from the city centre, all the way down Le Loi Street. Along the way, I did some online reading to remind myself about its fascinating history. 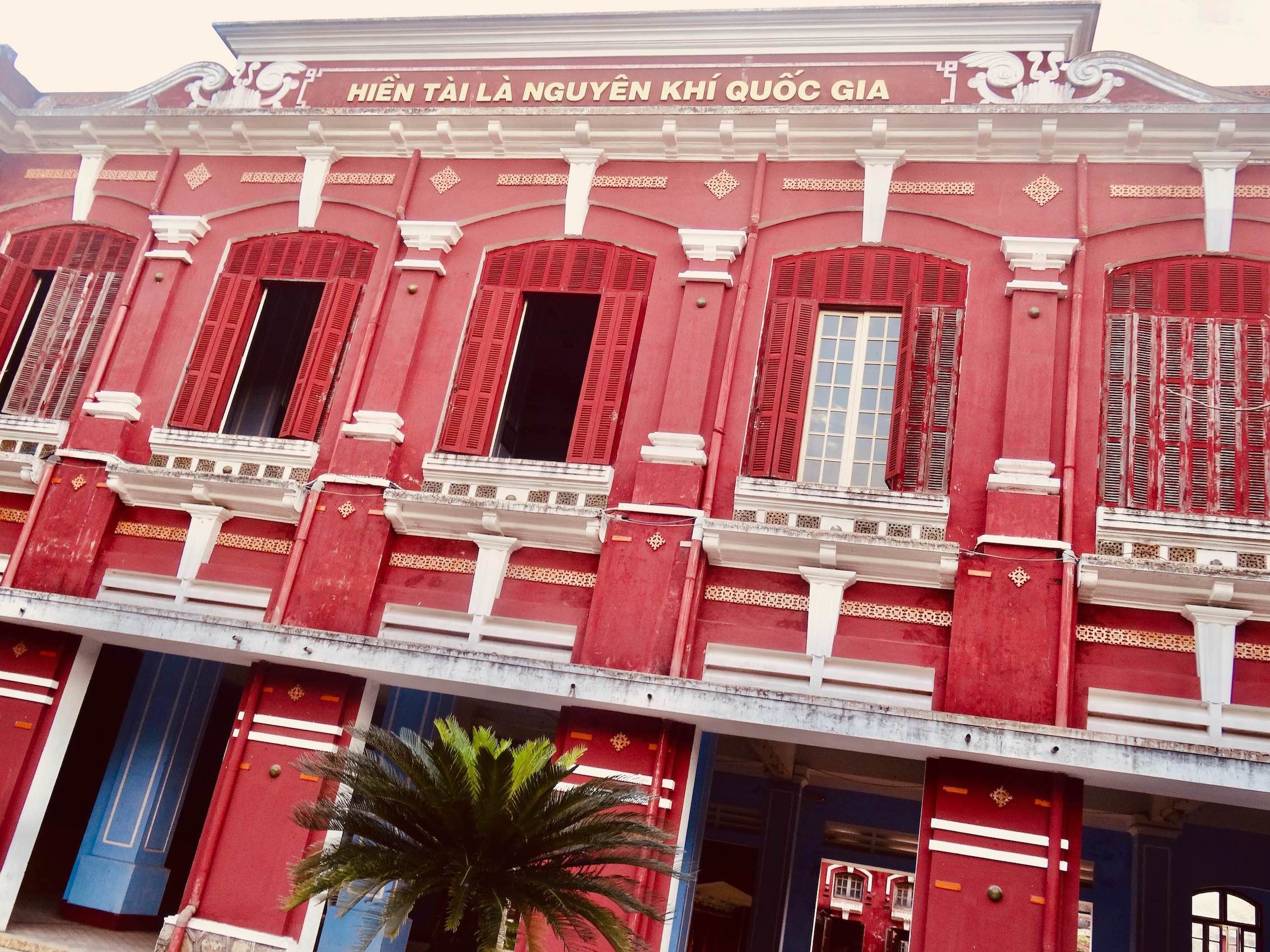 According to a weathered plaque near the main gate, the school was created in order to train the region’s most gifted young Vietnamese students for a range of roles within the French government. As a result, French Language was one of the main subjects. 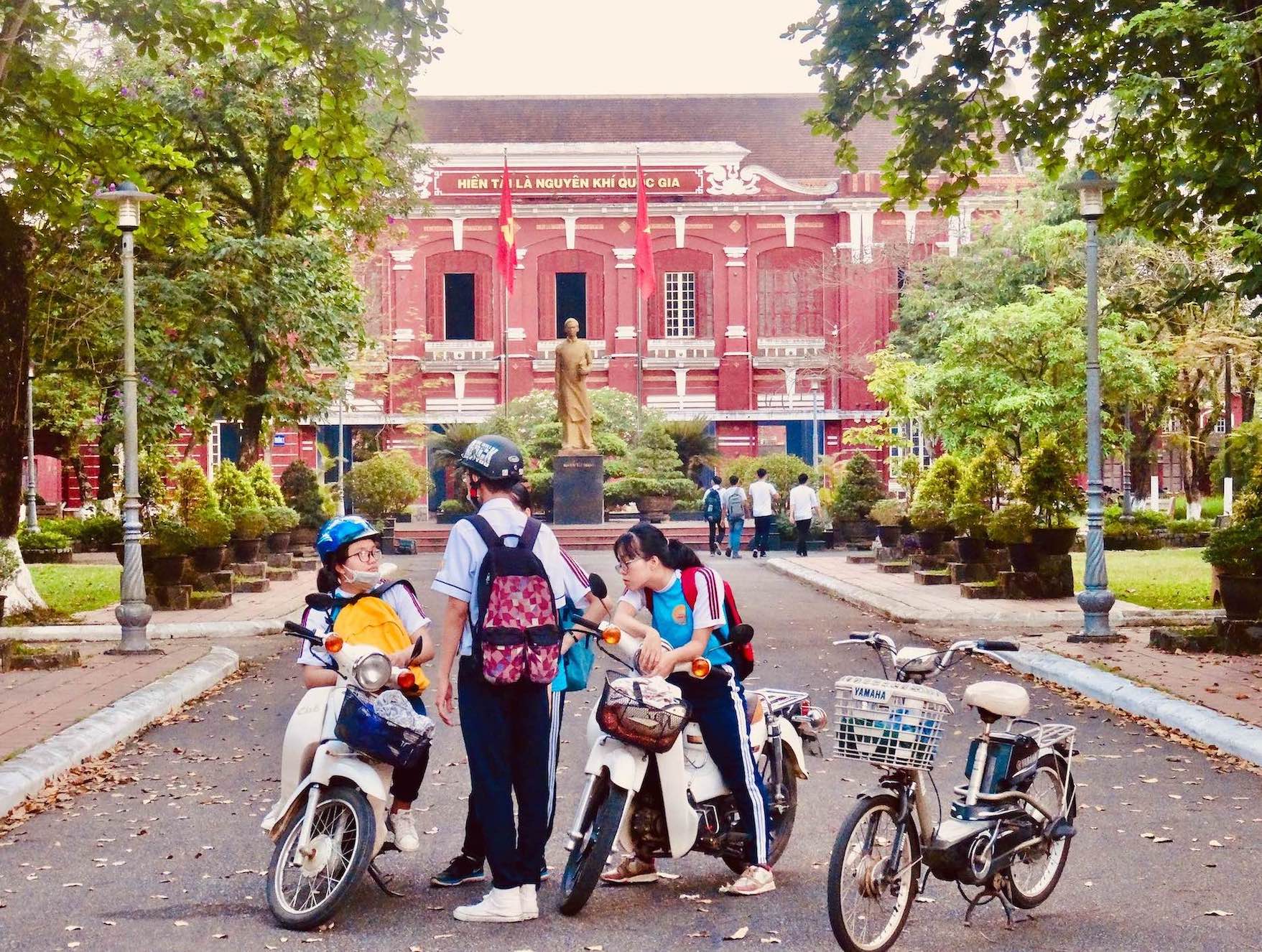 It certainly felt weird to casually stroll through the entrance gate of what is still very much an operational high school. However, back in 2018 both domestic and foreign tourists were actively encouraged to visit. All you had to do was show up on a weekday after 17:00 following the last classes of the day. No guide, no chaperone, nada.

Nevertheless, I felt more than a tad uncomfortable about the prospect of taking photographs. On the one hand, I wanted to capture the school as much as I could and meet the students. But it also felt a bit weird, I mean wasn’t this an invasion of privacy? 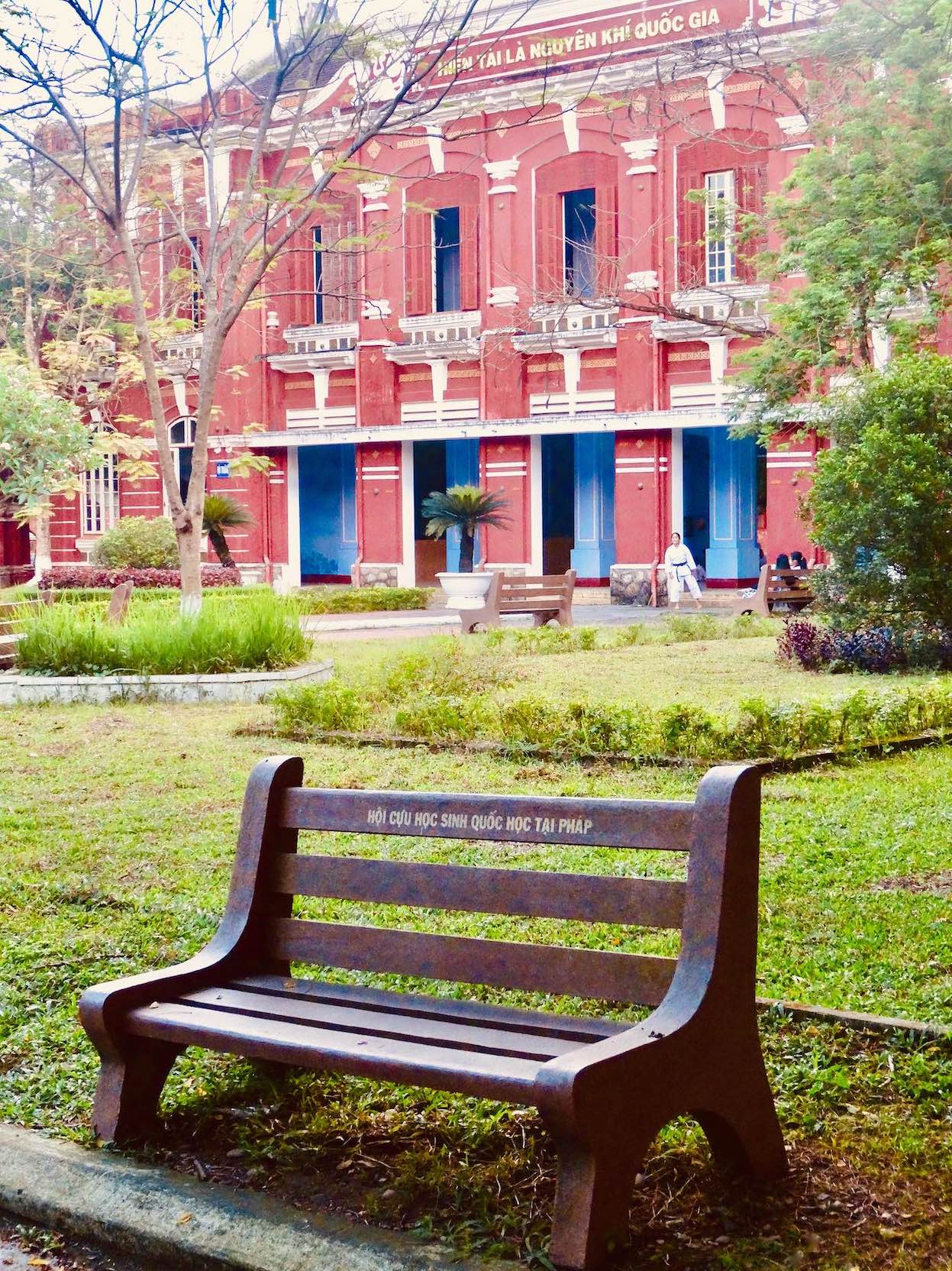 I needn’t have worried. As I tentatively made my way towards the main cluster of buildings, numerous students approached me. “Welcome to Hue!” cried one bespectacled boy, a mountain of books cradled under one arm. “Hey, where are you from?” called a passing group. “You wanna photo?” 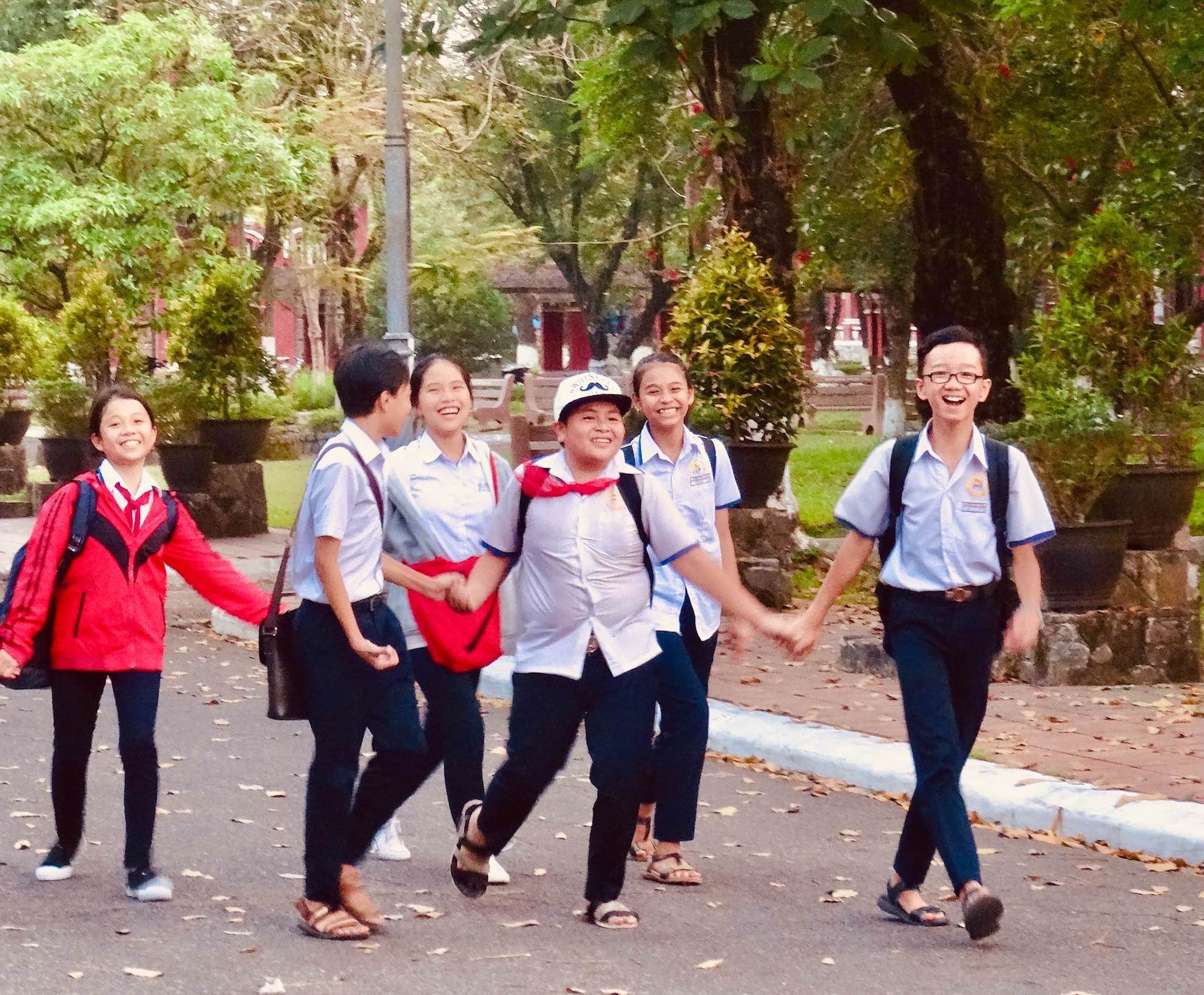 The French called the school École Primaire Supérieure (Superior Elementary College), while in Vietnamese it was (and still is) known as Truong Quoc Hoc (National School). In those early years the school educated some of the country’s most privileged young men, including Ngo Dinh Diem (son of Ngo Dinh Ka). Yup, the man who would become President of The Republic of Vietnam from 1955 until his assassination in 1963. 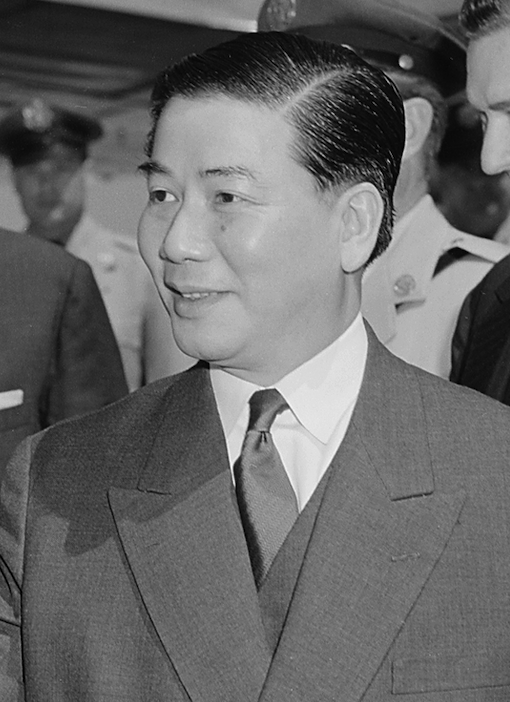 Diem was just one in an astounding list of alumni. The doomed revolutionary Tran Phu, The First General Secretary of The Communist Party of Vietnam, also studied here. As did Vo Nguyen Giap, the Vietnamese general regarded as one of the greatest military strategists of the 20th century. 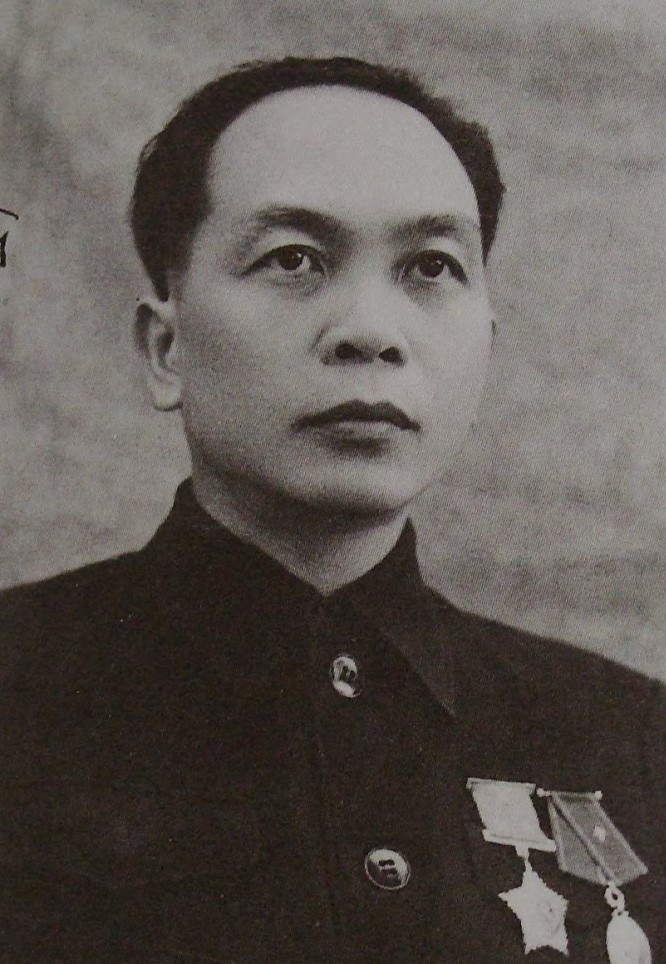 And then you’ve got the celebrated poet, journalist and literary critic Xuan Dieu. And the cherished songwriter and musician Pham Tuyen. Moreover, even the great Ho Chi Minh passed through The National School’s halls. Though he was ultimately expelled in 1908 for engaging in “revolutionary activities”. Oh well, it didn’t seem to hold him back. 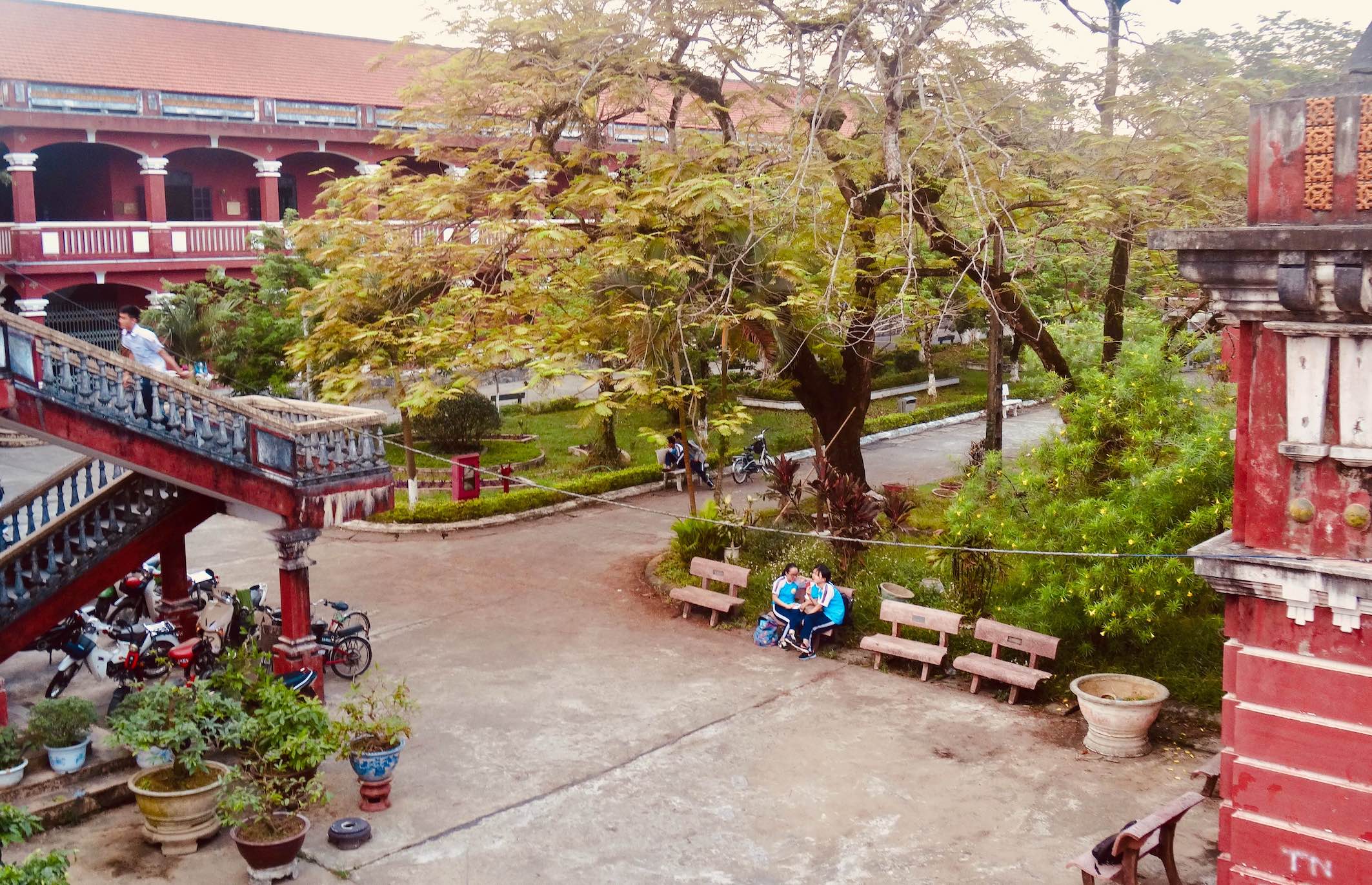 With this history very much in mind, it was definitely a thrill to saunter around the main courtyard. While the school day had ended, there was still plenty of activity. Resting on a stone bench, I spotted a teacher striding down a signature red balcony.

Elsewhere, a pair of boys exchanged books from their backpacks, while a quartet of girls chatted quietly outside a first floor classroom. I couldn’t help but wonder if, among them, Truong Quoc Hoc was shaping yet another young student destined for greatness. 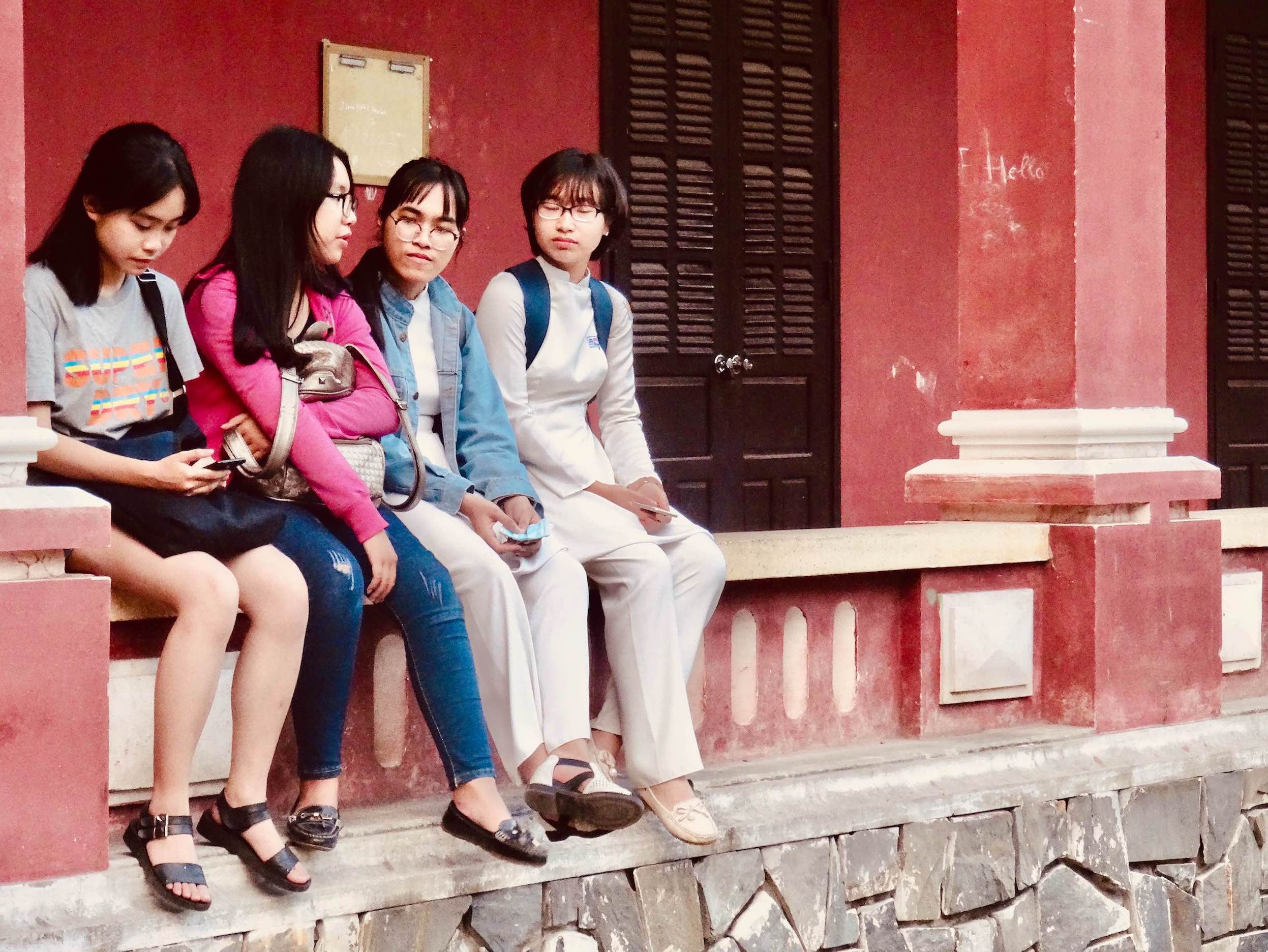 The deeper I explored, the more surprised I became about how run down the school was. Just about every building was crying out for a fresh coat of paint. Furthermore, there were cracked windows and splintered doors, in addition to weeds growing out of the stone in all the courtyards. Surely those responsible for maintaining the place could do better than this? 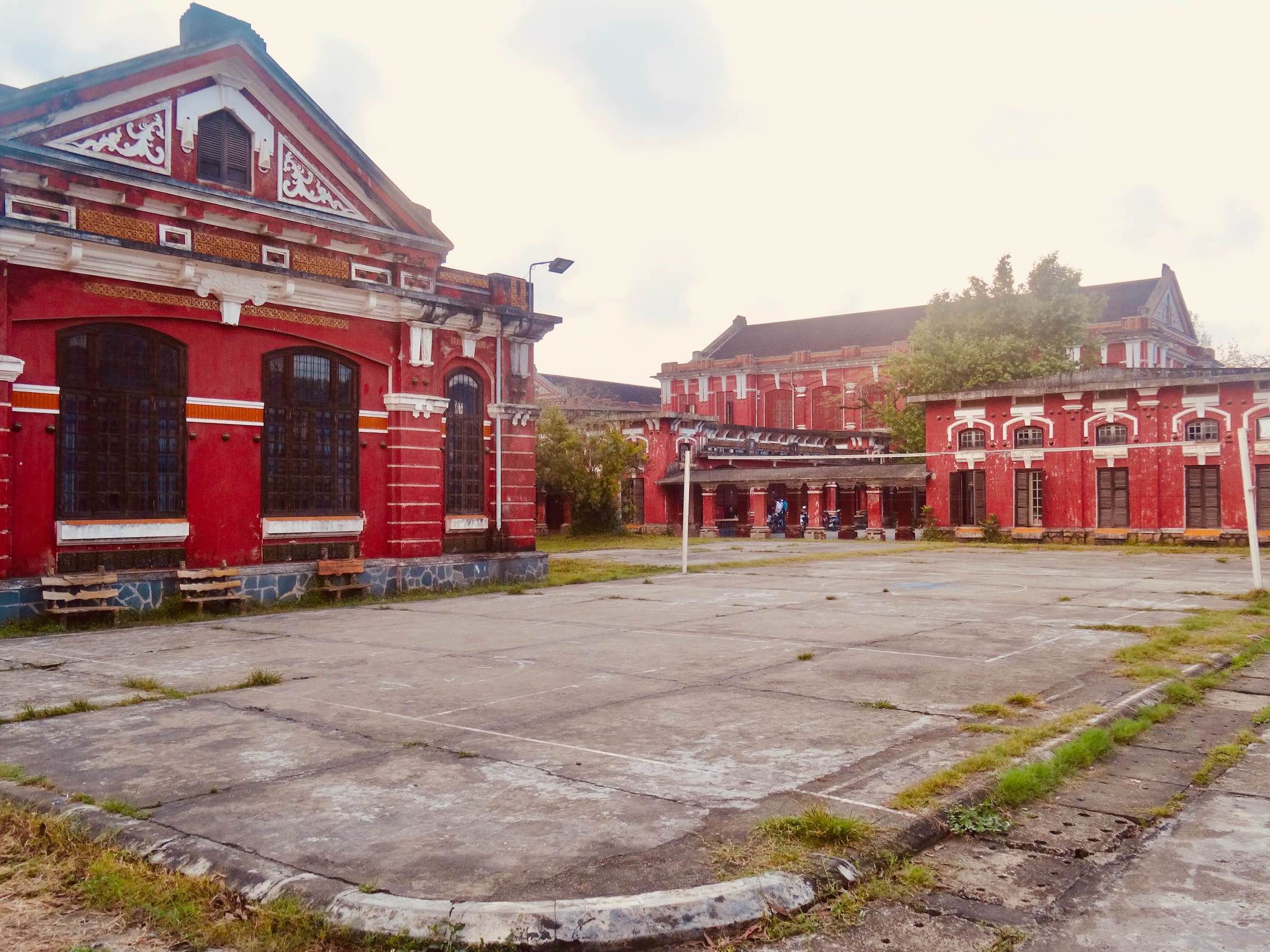 This sad looking playground summed up the neglect perfectly. With only a lone volleyball net to keep the weeds company. I was breathing in the silence when I felt something… or rather someone… tugging at the sleeve of my t-shirt.

“Ha-lo!” cried the tiniest boy. Dressed in blue shorts, a playful Power Rangers t-shirt and a tilted cap, he shot me what is quite possibly the cheekiest gap-toothed grin I have ever seen. 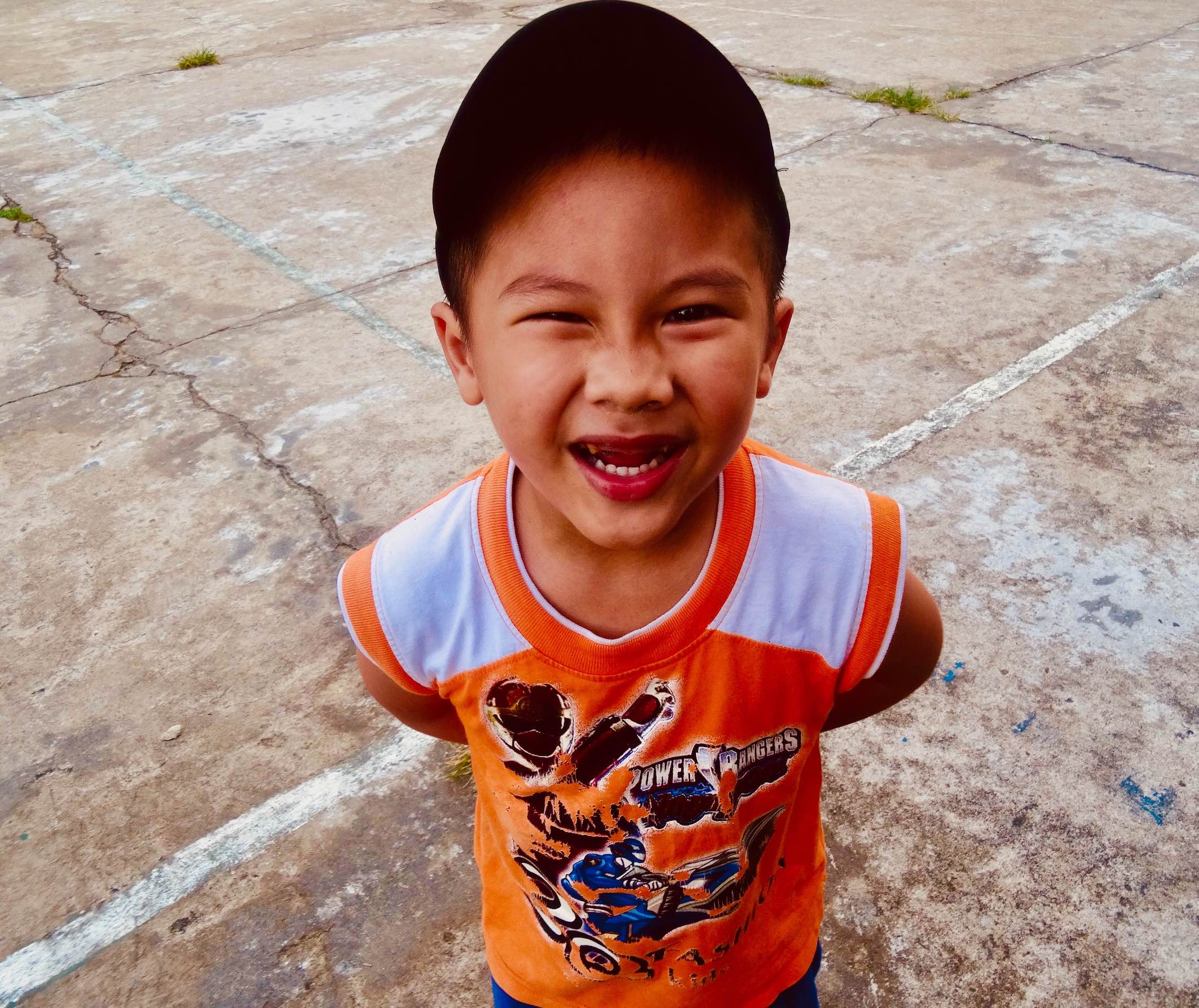 “Ha-lo” turned out to be the extent of the little boy’s English language skills. Hence he proceeded to babble away in Vietnamese, his machine-gun-fire sentences rattling around me as I walked the playground. I couldn’t help but wonder what he was doing there. Clearly too young to be a student, perhaps he was waiting on an older brother. 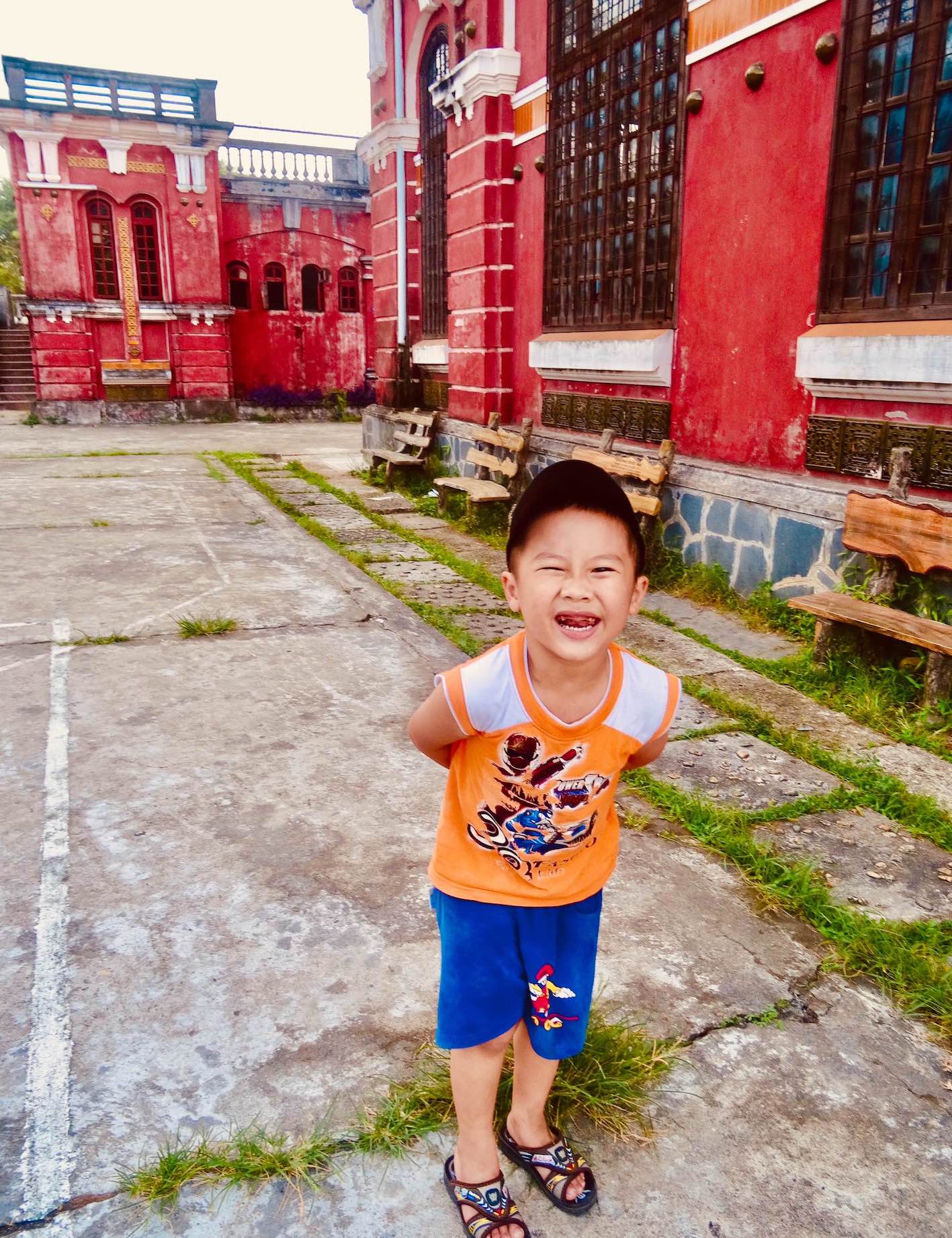 The little power ranger was so curious about me he decided to follow me around. And all the while he never stopped talking. Eventually, a security guard of some sort mooched over and asked if he was bothering me. “Oh no, not at all” I replied. Next, my stroll took me to the school football pitch, where a game was in progress. 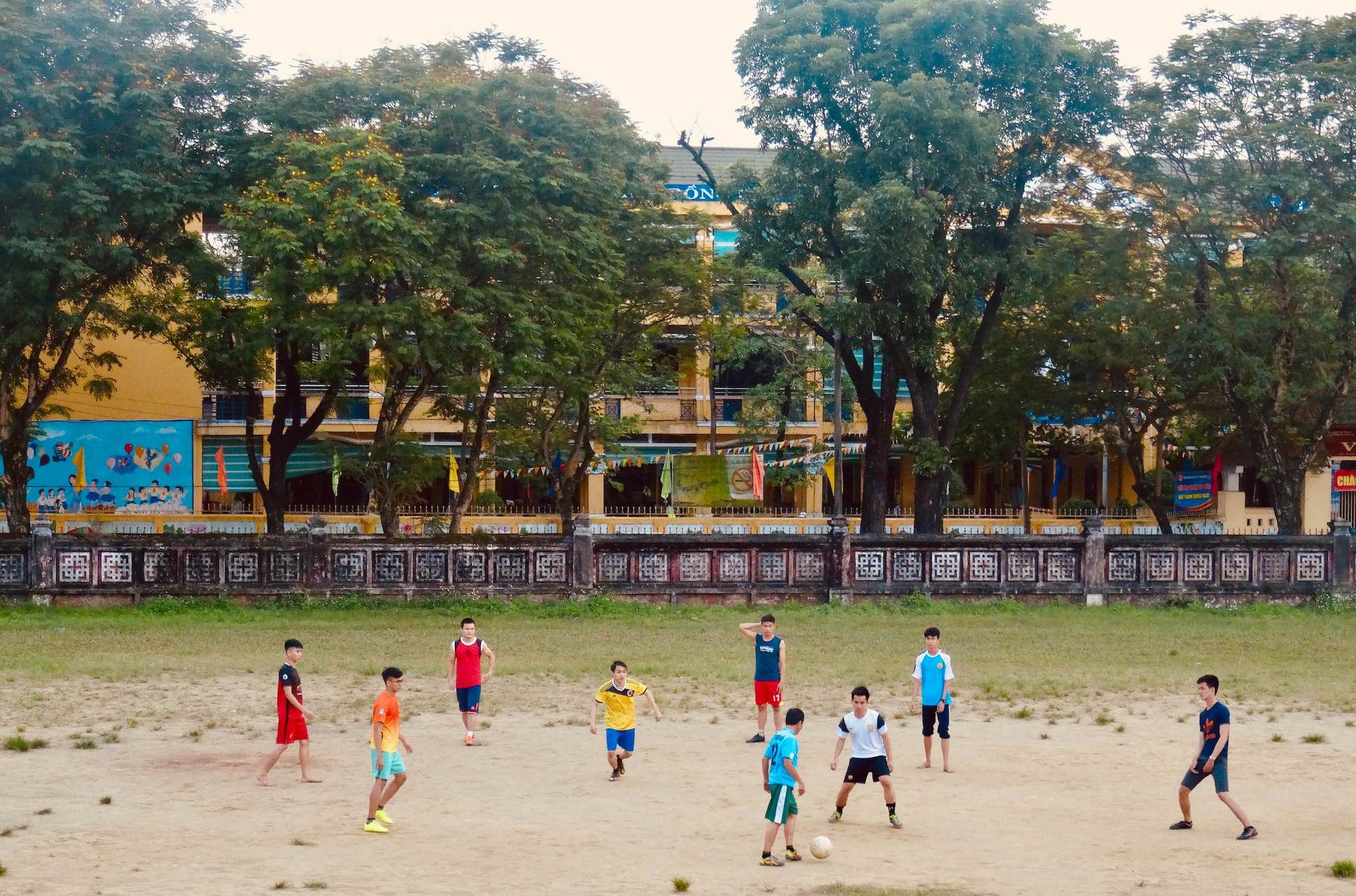 Once again the so-called facilities were somewhat lacking. The pitch in question being more of a sand pit, with occasional bursts of clumpy grass diverting the trajectory of the ball. Still, the boys did their best with the conditions and it was a good game with several standout players. 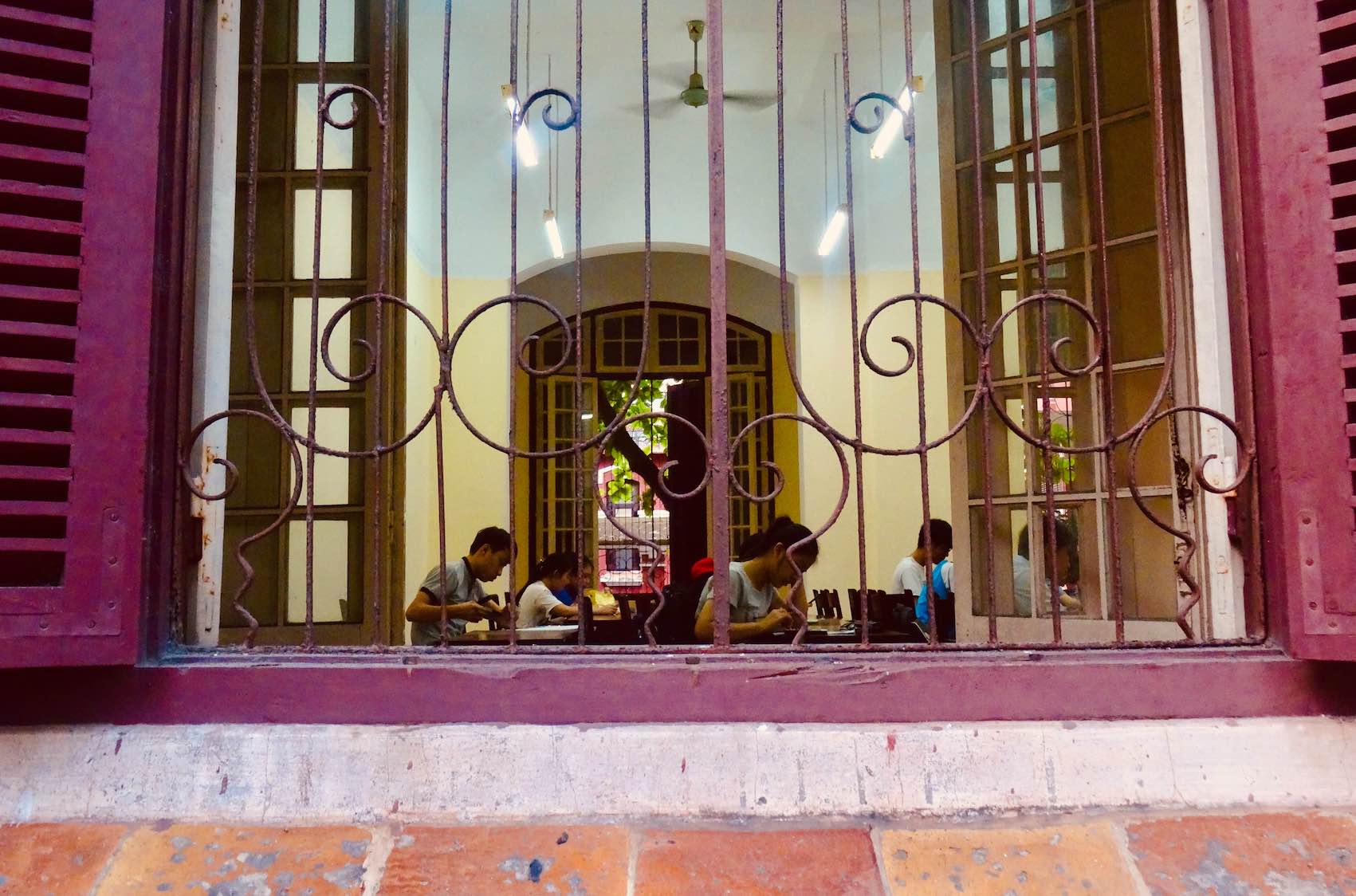 125 years after it opened, Hue National School remains a prestigious institution. In fact, home to around 1400 students, places are limited. To stand any chance, one needs to pass the tough entrance exam and impress in a string of testing interviews.

As I headed for the exit, I stopped for a brief chat with Keung, a serious, softly spoken boy from the nearby city of Hoi An. “I’m really lucky” he told me, with only a hint of a smile. “I got a sponsorship to come here, not many of those available”. Keung was in his final year and was studying French, which he described as “easier than English”. 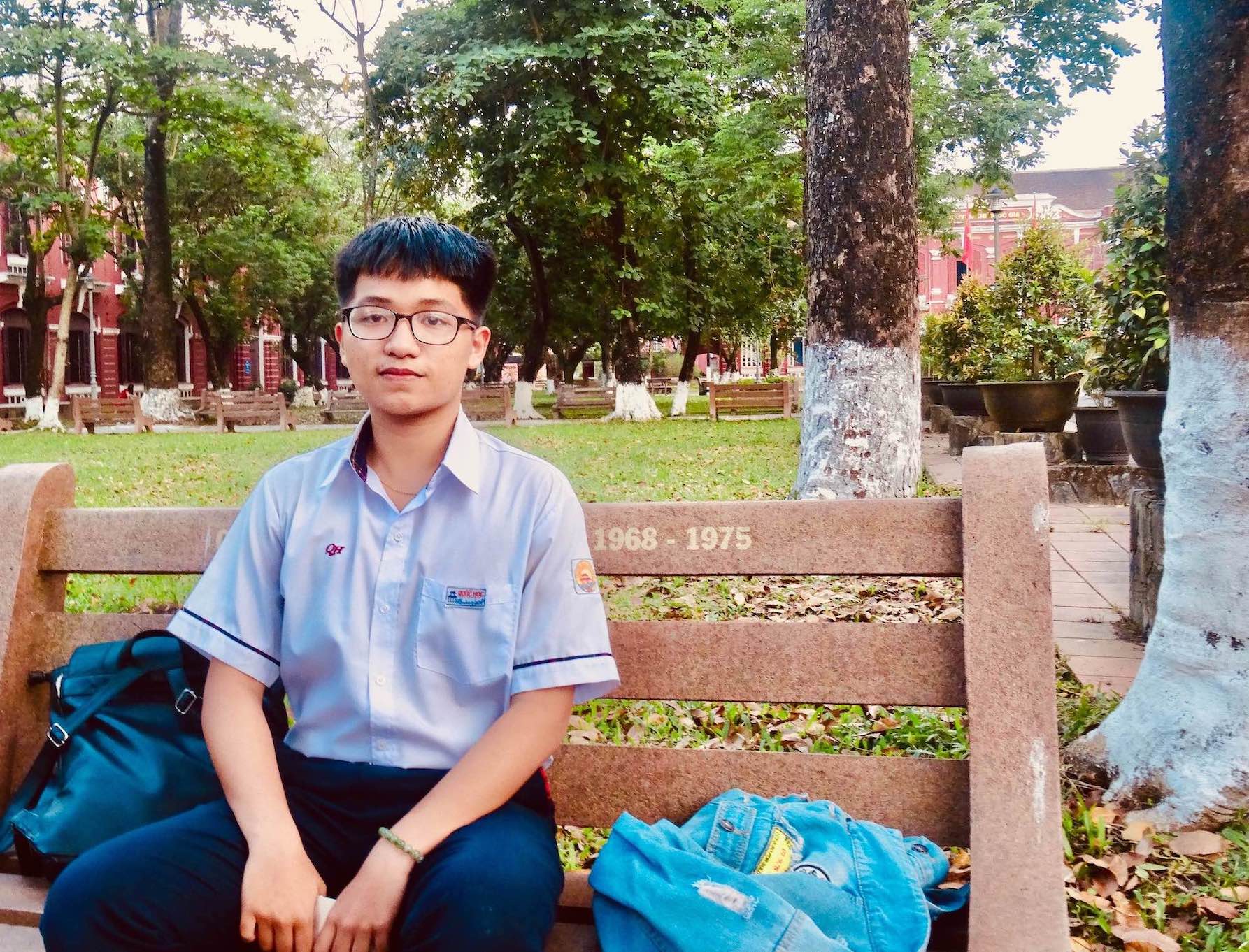 I asked him what he wanted to do after he graduated, a question that produced a long pause. “I’m not sure” he sighed. “But whatever it is, would like it to be in Paris”. I wonder if he actually got there.

In 2018 anyone who wanted could show up after classes and walk around the school grounds. I wasn’t allowed to enter any of the buildings, though in all honesty there was very little in the way of security. Today, in COVID times, I see casual visits like the one I made are no longer permitted. 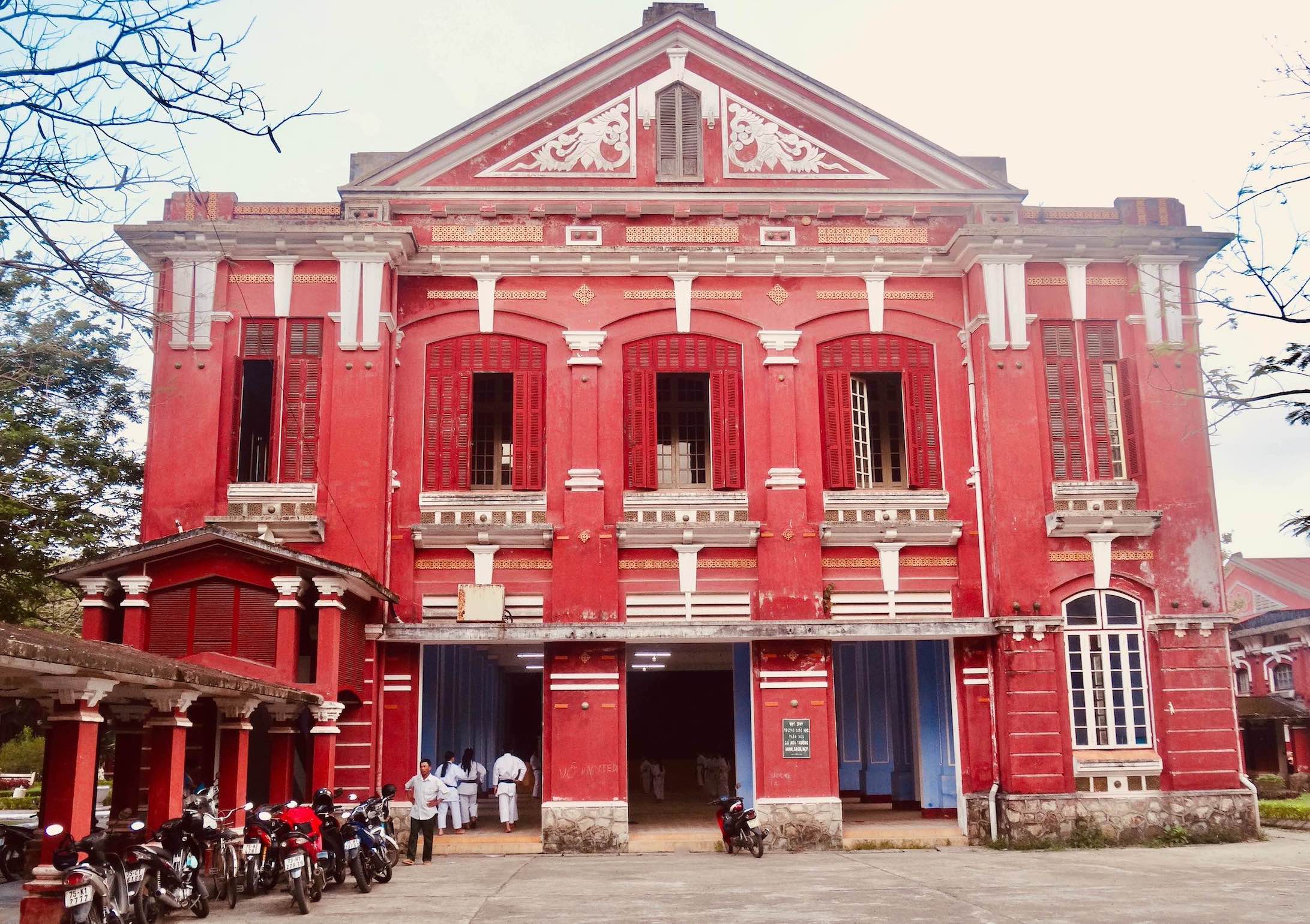 Like this? Then why not have a leaf through my many articles from across Vietnam.