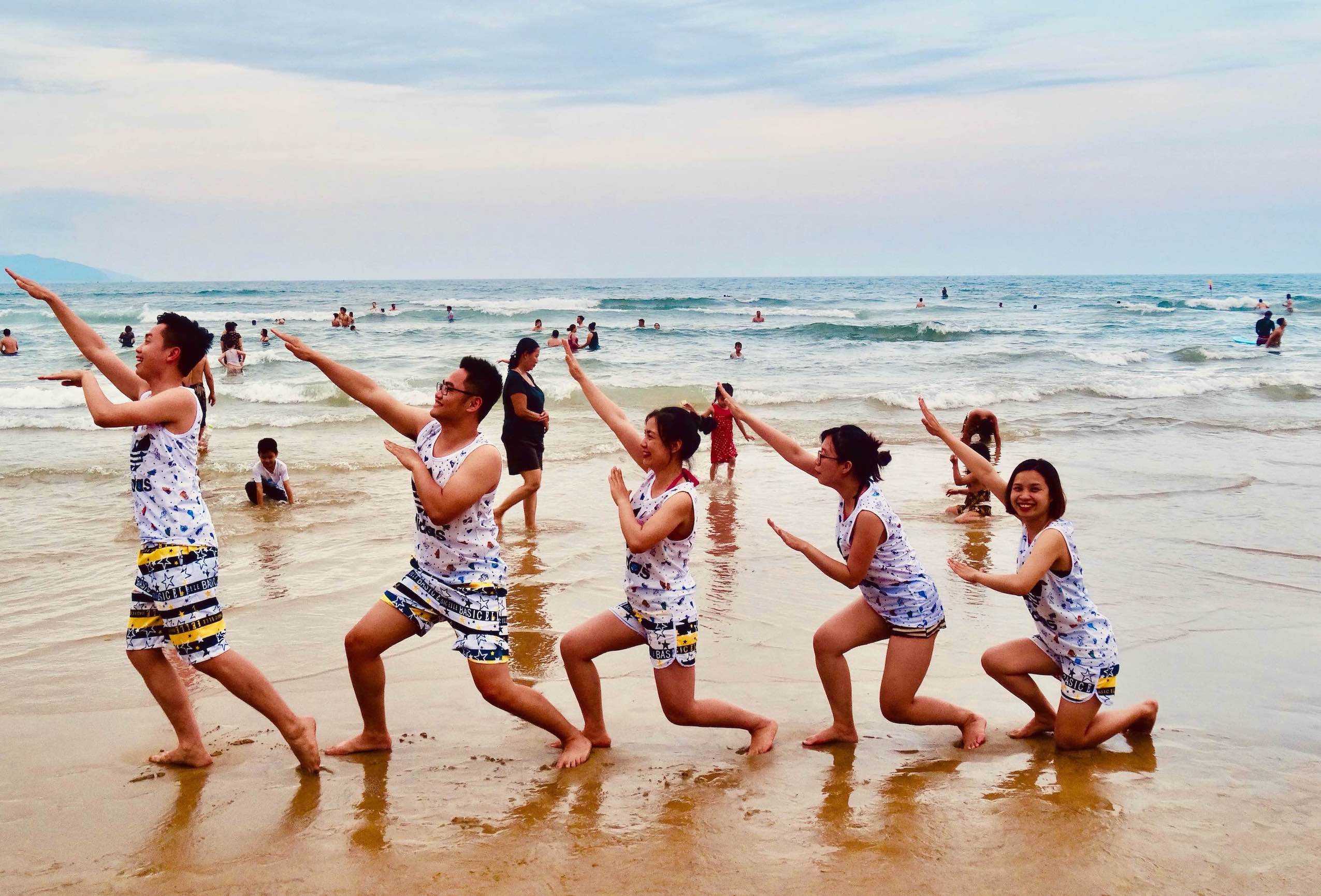 When I look back on my Danang adventures, I naturally recall all the amazing sights I managed to tick off during my five night stay. However, every bit as memorable is the day I took a well-earned rest and didn’t wake up until midday. The day when, having had coffee, I wanted nothing more than a long leisurely stroll down the Danang Coastline.

Located right on The South China Sea, Danang is home to over 11 kilometres of beautiful golden beaches, which run all the way to the neighbouring city of Hoi An. Feeling unashamedly lazy, I took a taxi across the city to Non Nuoc Beach, where I began my explorations. 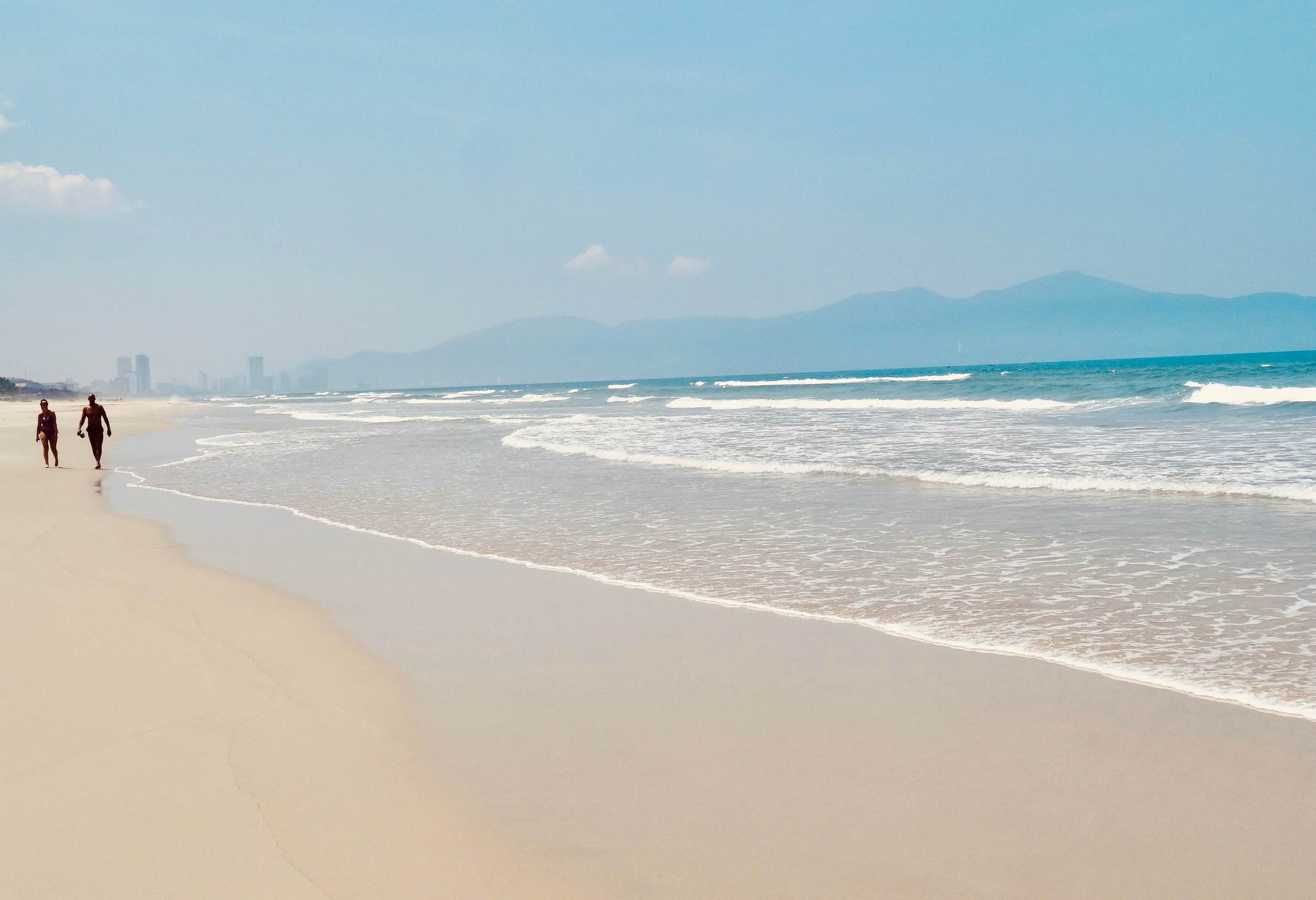 I couldn’t believe how quiet it was! In fact, as I entered the sands from the main road, I felt a wave of pure calm wash over me. A wave comprised of a light sea breeze and the soft squelch of sand underfoot. And of course, the actual waves that gently rocked back and forth before me. In the distance two people plodded towards me, but they were gone in a matter of minutes, nodding and smiling as they went. And then I was alone. 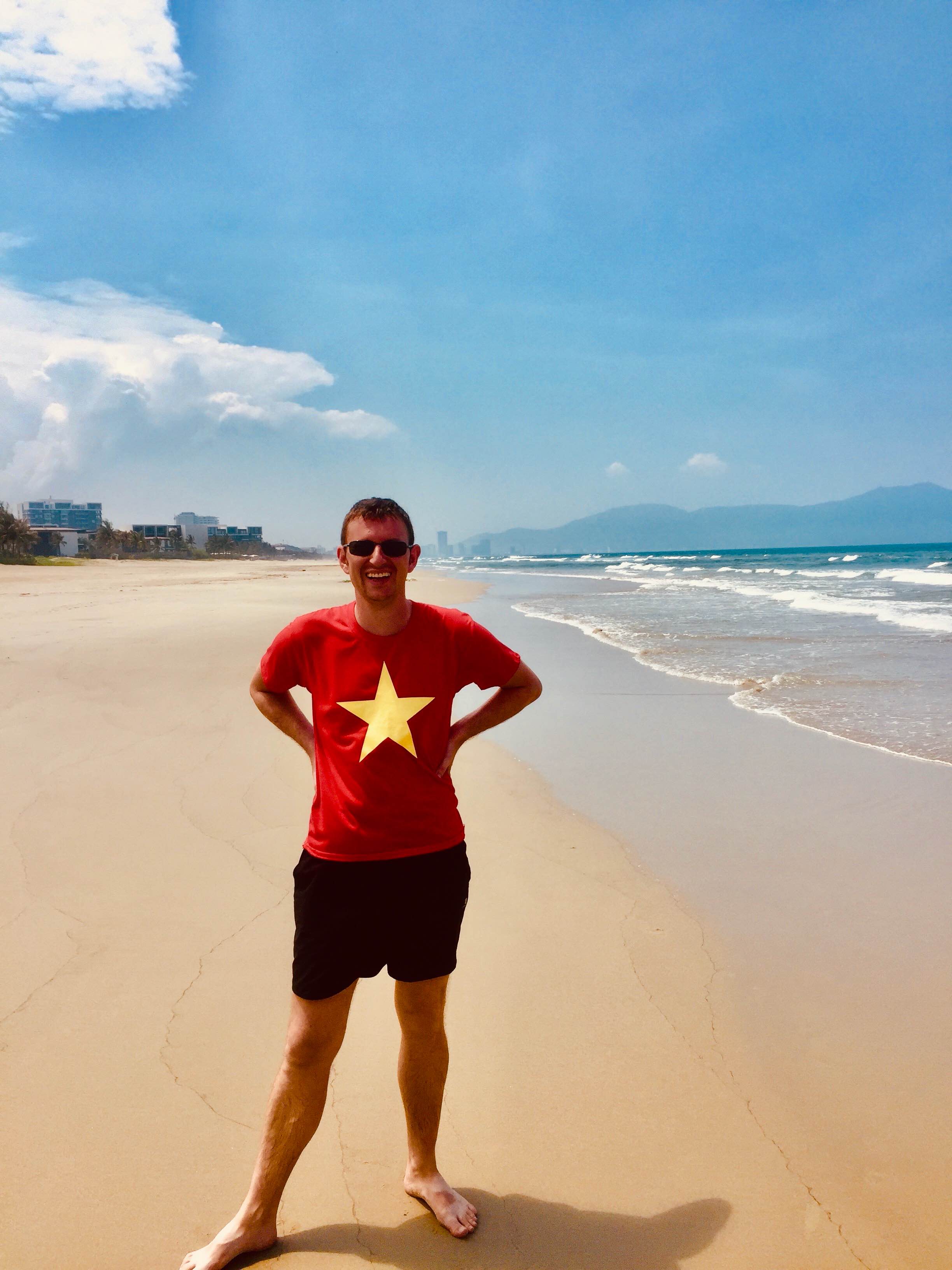 I sat on Non Nuoc Beach for about half an hour, soaking up as much of the sun as I could bear. In that time only one person appeared, a shaggy Australian backpacker who cheerfully agreed to take my photo. Then I whipped off my t-shirt and dived into the sea to cool off. Instinctively, I knew this was going to be an amazing day. 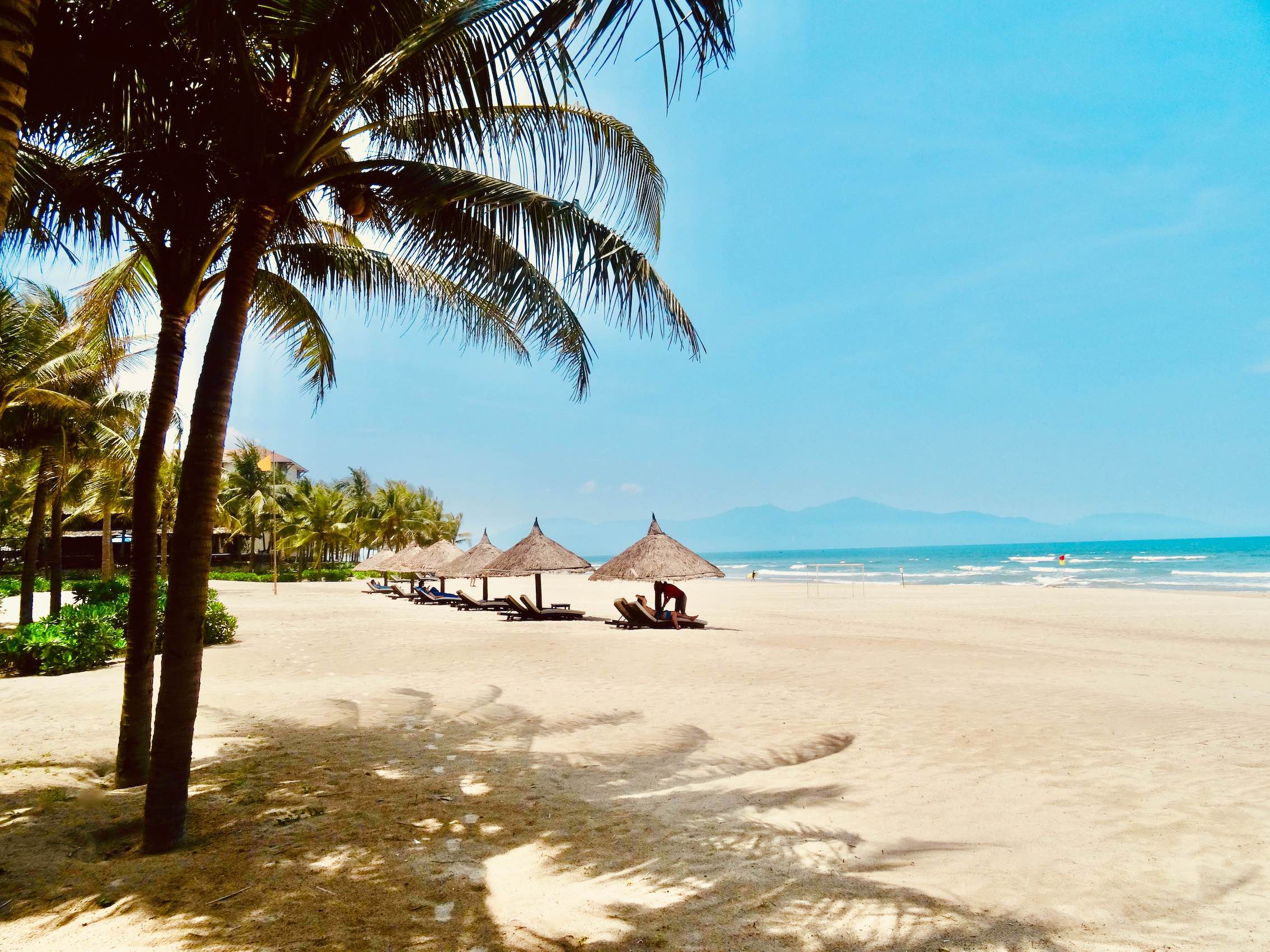 A lazy beach day in Vietnam.

Before arriving in Danang I had admittedly scoffed at an article that claimed Non Nuoc was one of the world’s most beautiful beaches. I’m not sure why I’d been so quick to dismiss this, perhaps because it’s a city beach. But that afternoon I could certainly see why it’s so highly rated, with clear turquoise waters, pristine sand and little in the way of visible pollution. 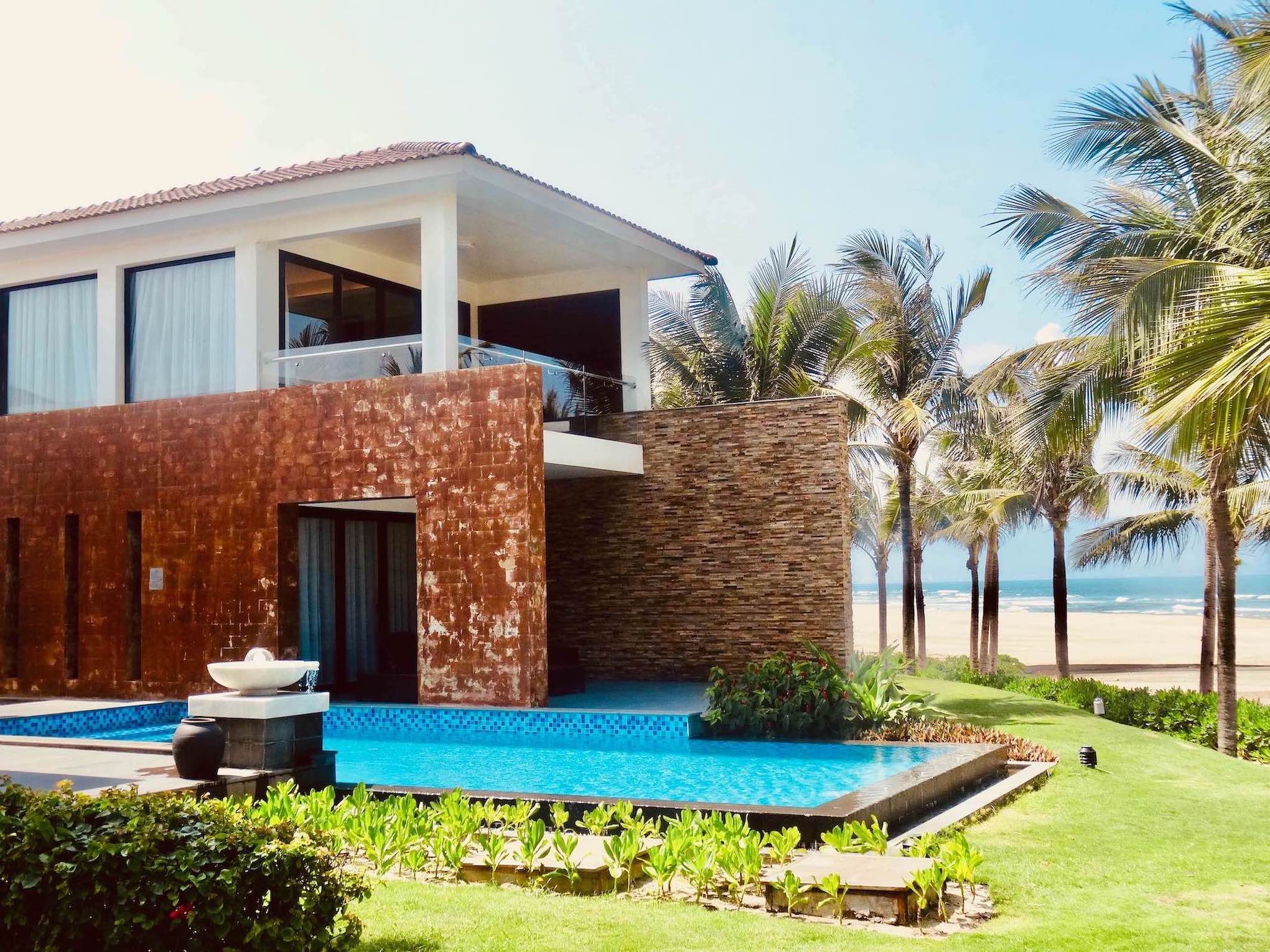 No surprise then that there’s some suitably swanky accommodation on Non Nuoc Beach. Some are private apartments bookable through Airbnb and Booking.com. Most come with private pools and were nowhere near as expensive as I’d imagined. 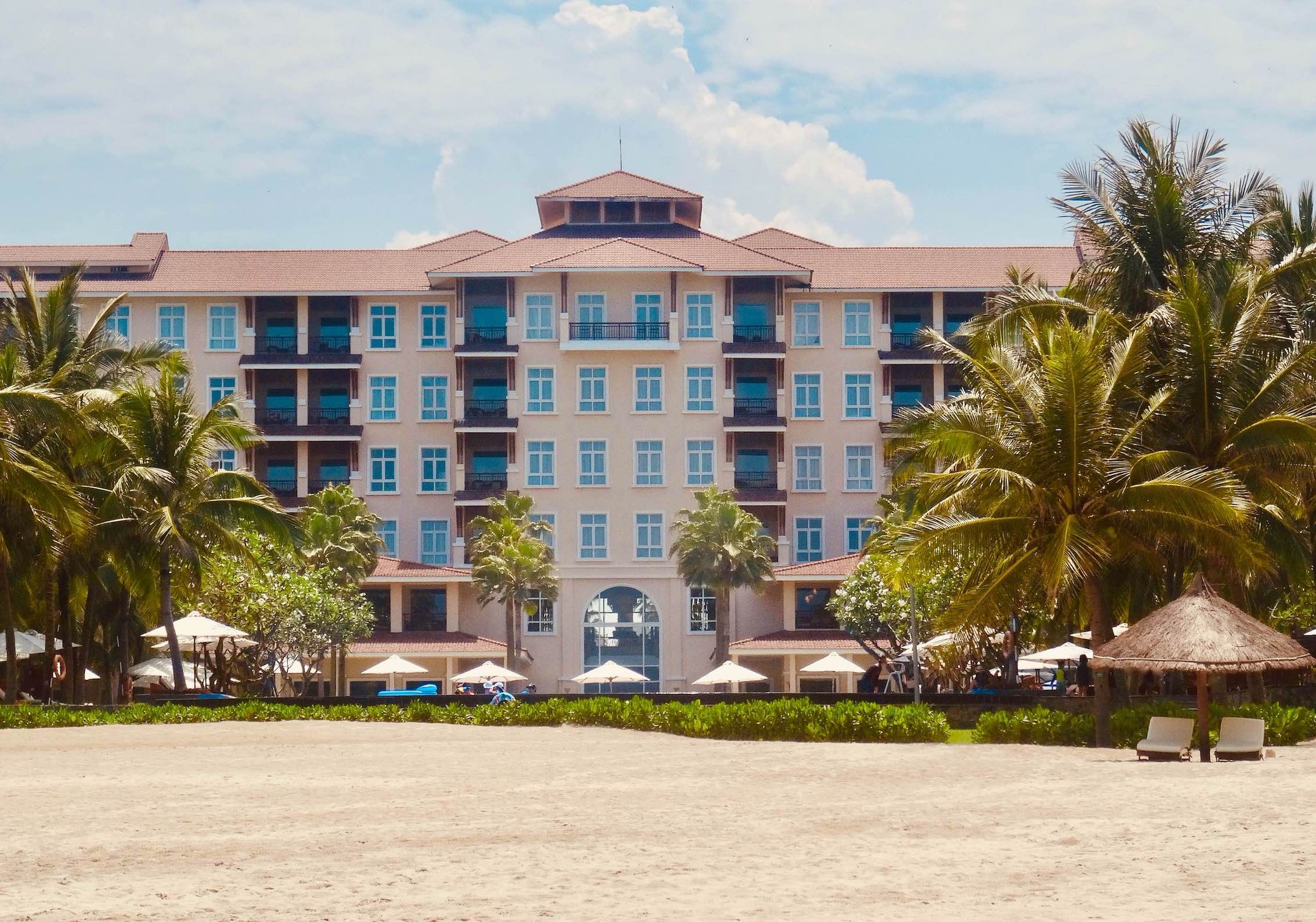 There’s also a giant hotel called The Vinh Pearl Resort. A quick look on my phone brought up phrases like “world class facilities” and “get the celebrity treatment”. Thus I decided to investigate and see if anyone would make me feel like Brad Pitt. 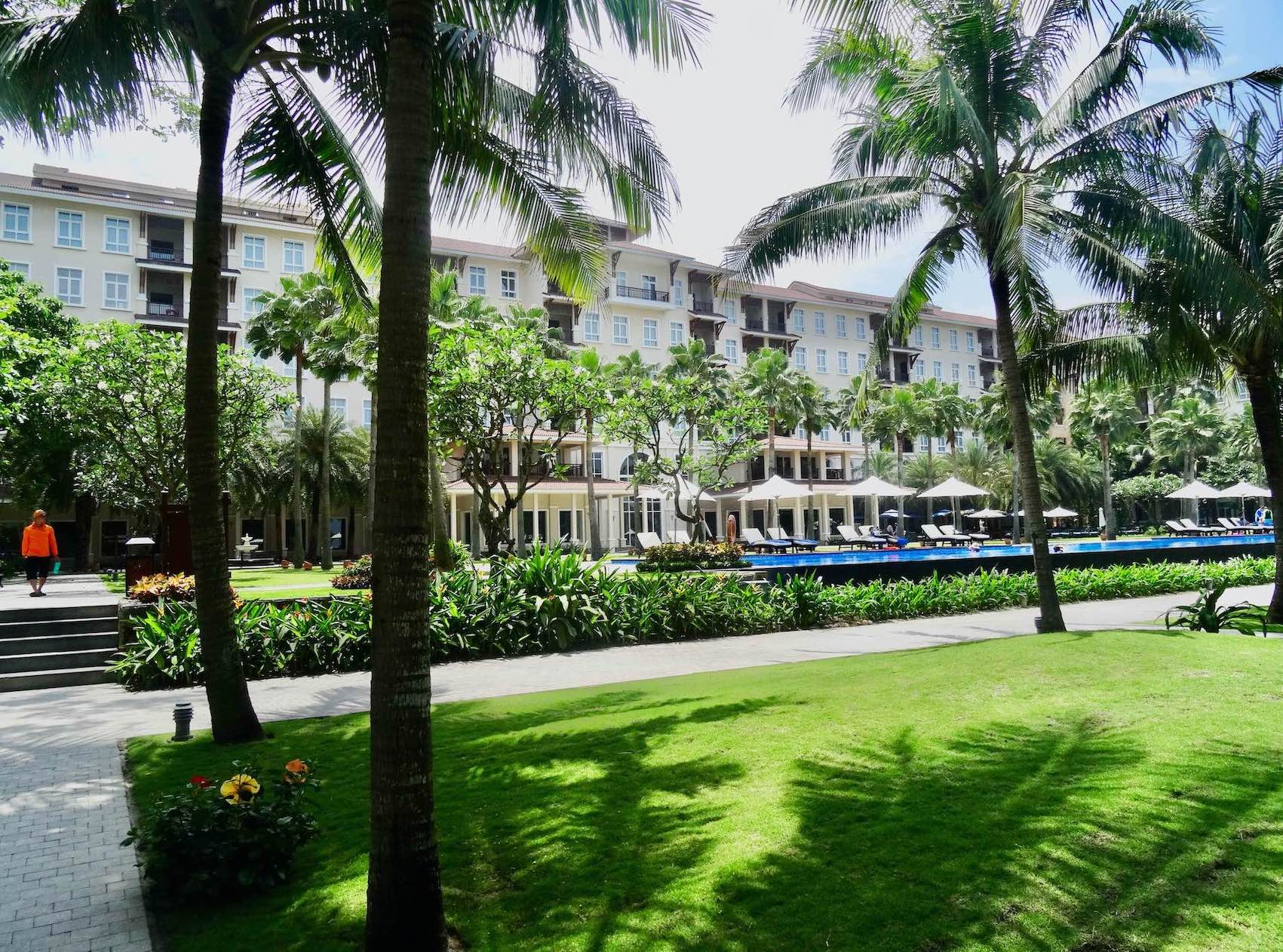 Within a minute I was strolling deep into Vinh Pearl’s impeccably maintained gardens. Spotless lawns… handsome palm trees… a conscientious janitor sweeping up some stray leaves on the stone pathway. Uh huh, these guys seemed on top of things. And then I saw the pool, which was… rather nice. 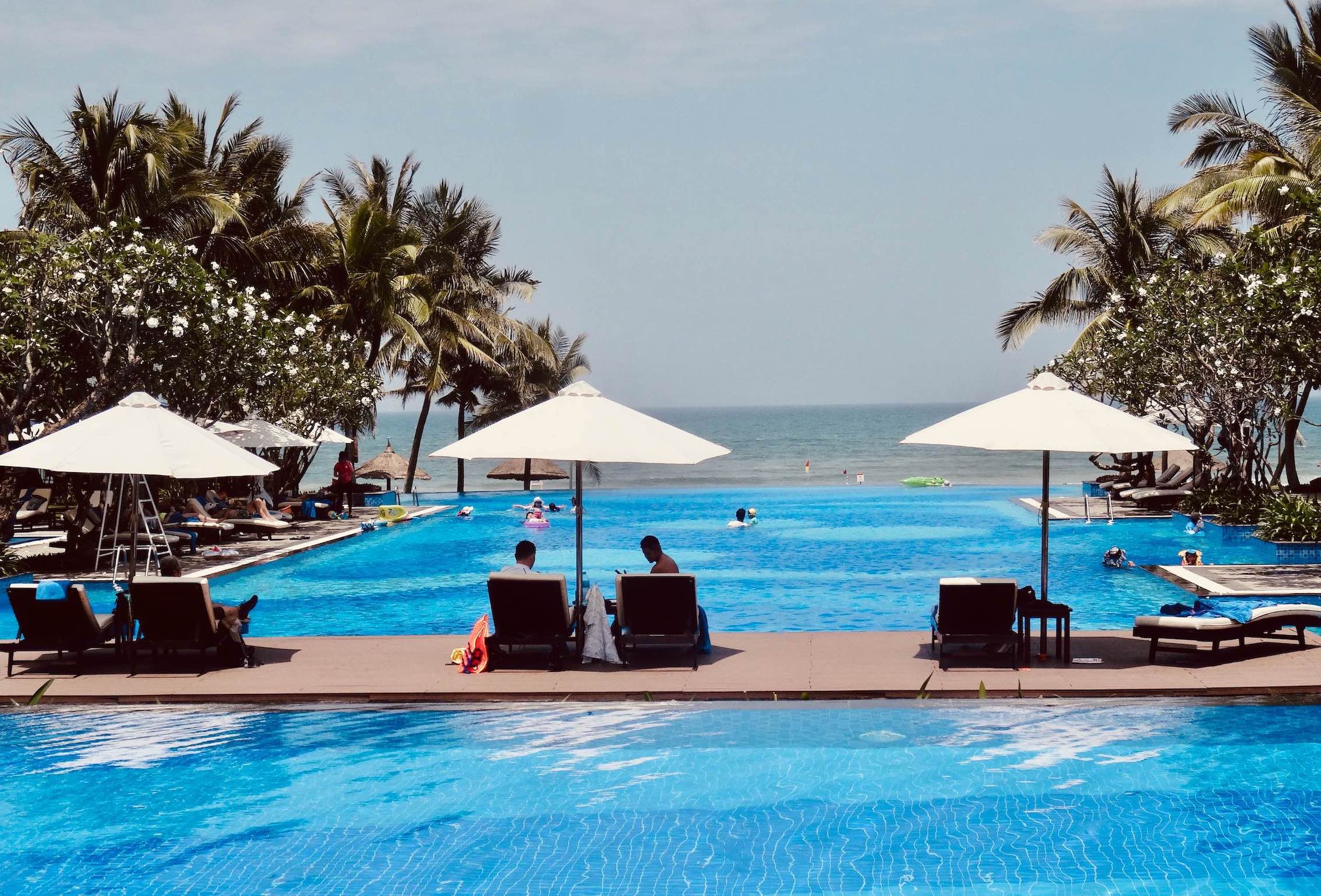 Inside it was all marble surfaces, dark wood, tasteful floral arrangements and soft armchairs. After a quick chat with a woman at reception, I managed to land a brief tour around one of their Deluxe King rooms. 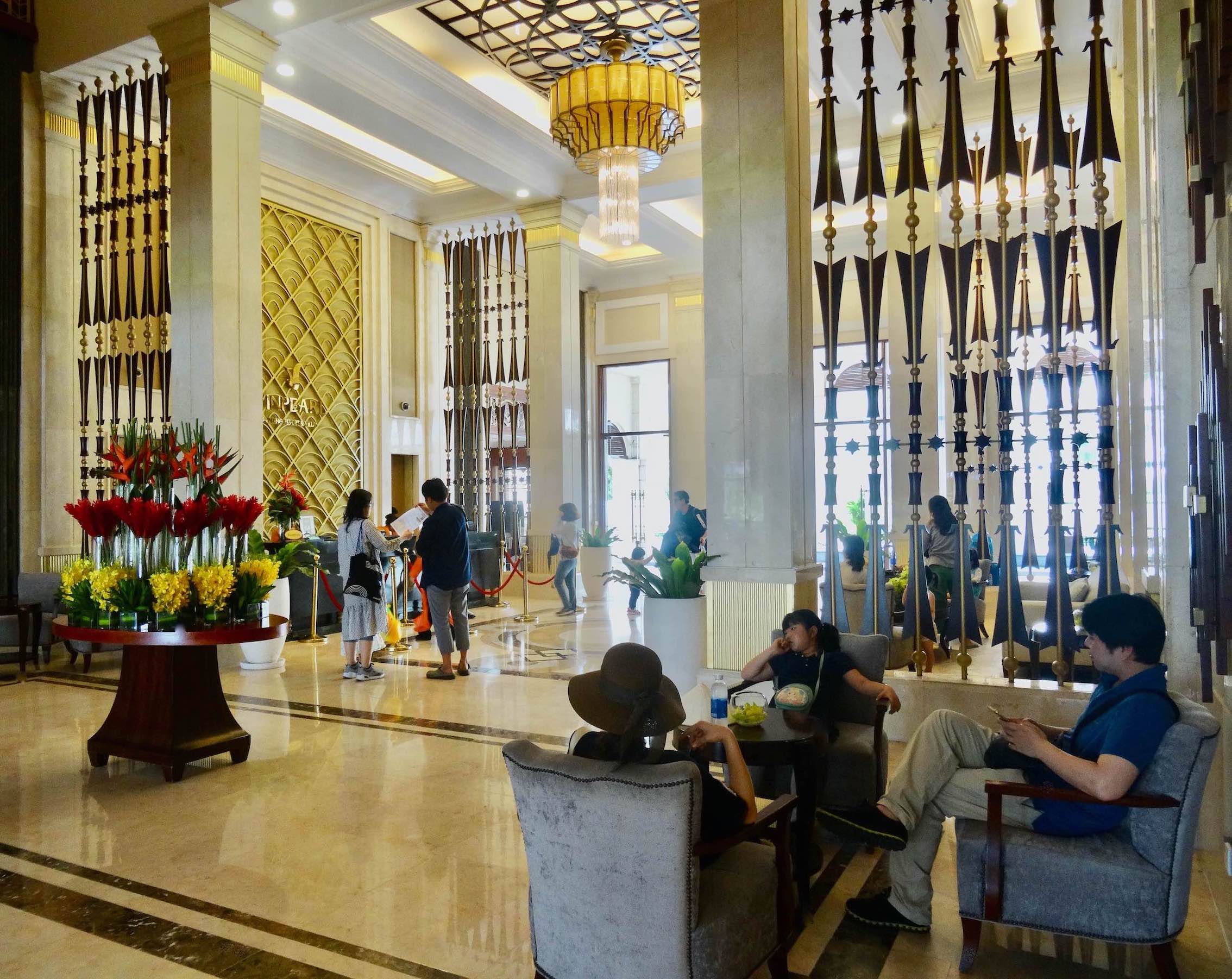 Inside the Vinh Pearl Resort.

Frankly, I was underwhelmed by the somewhat sparse bedroom/living room. Even if the giant bed looked much more inviting than my hostel bunk. Then I saw the bathroom, which actually made me consider extending my Danang stay with a night at The Vinh Pearl. Finally, sensible Leighton took over and I thanked the lady for her time. 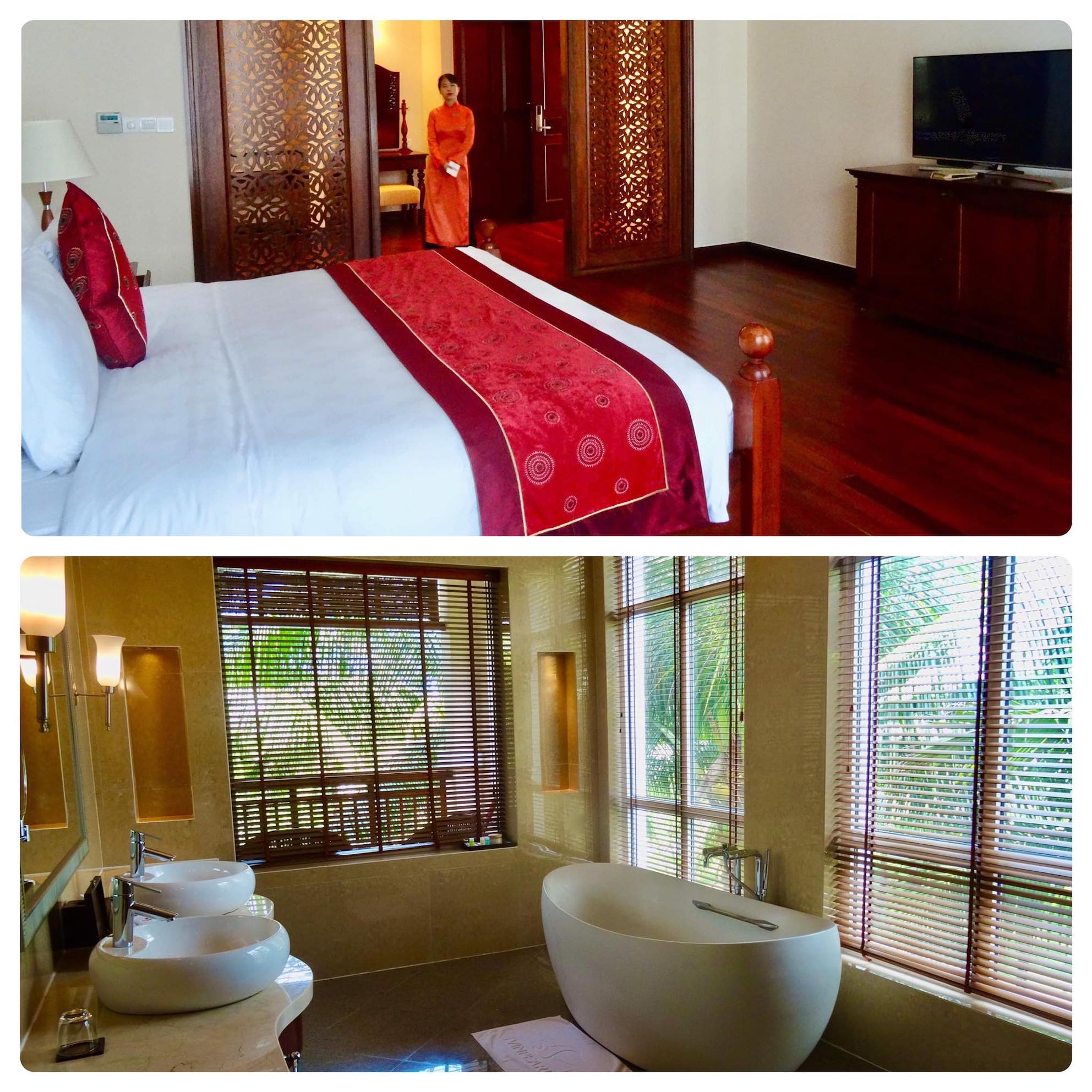 Back on the beach, I slowly but surely made my way towards downtown Danang. A number of fancy hotels came and went until I eventually gave in to my building hunger and branched off into another ritzy resort. Taking a seat under a parasol next to a large, circular pool, I had no idea where I was. Until, that is, a shirt-and-tie waiter arrived to offer me a menu. “Welcome to The Hyatt Regency, sir”. Well, a ring-a-ding-ding. 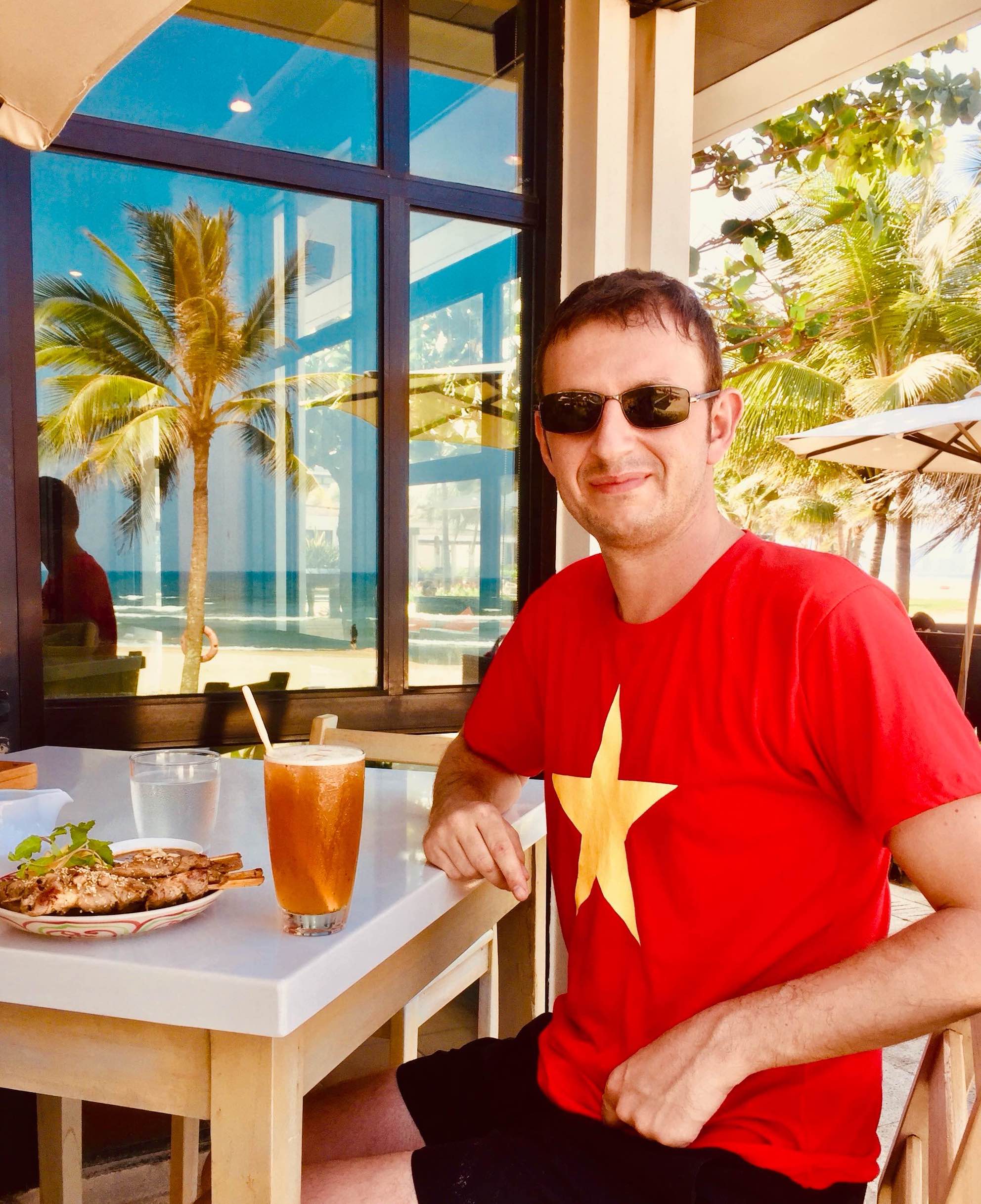 Ignoring the eyebrow-raising prices, I realised just how ravenous I was. “Pick me!” screamed the Grilled Chicken Sticks with Peanut Satay Sauce & Green Mango Salad. So I did, along with a wonderfully refreshing peach and lime ice tea. 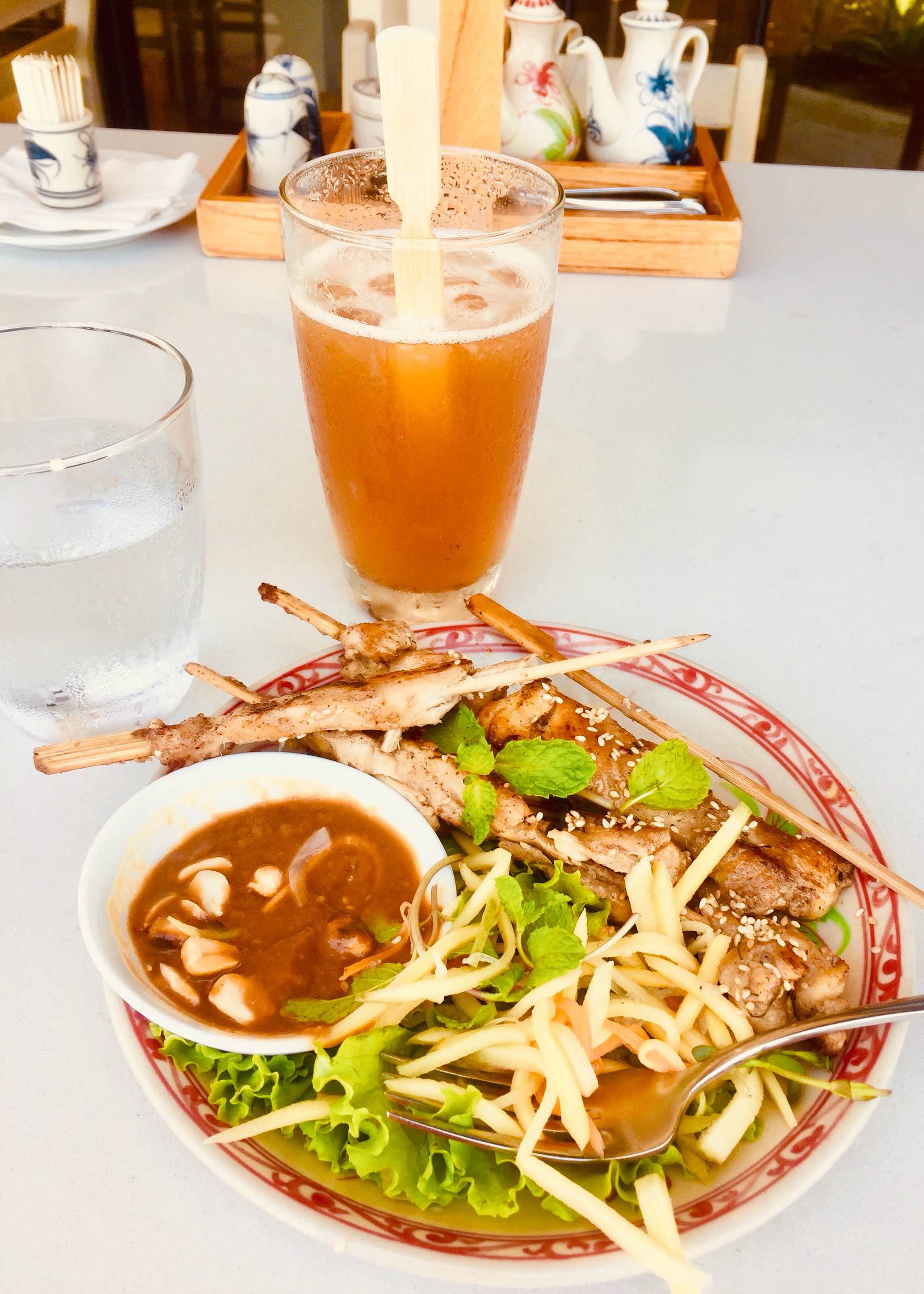 Lunch at The Hyatt Regency Resort.

The Danang Coastline is comprised of numerous beaches. Though you wouldn’t necessarily know it, as visually it’s just one long magnificent golden stretch. After lunch, my stroll took me out of Non Nuoc Beach and onto the curiously named Bai tam T20 Beach. There is no sign to tell you this, just Google Maps, which I was keeping an eye on as I progressed. 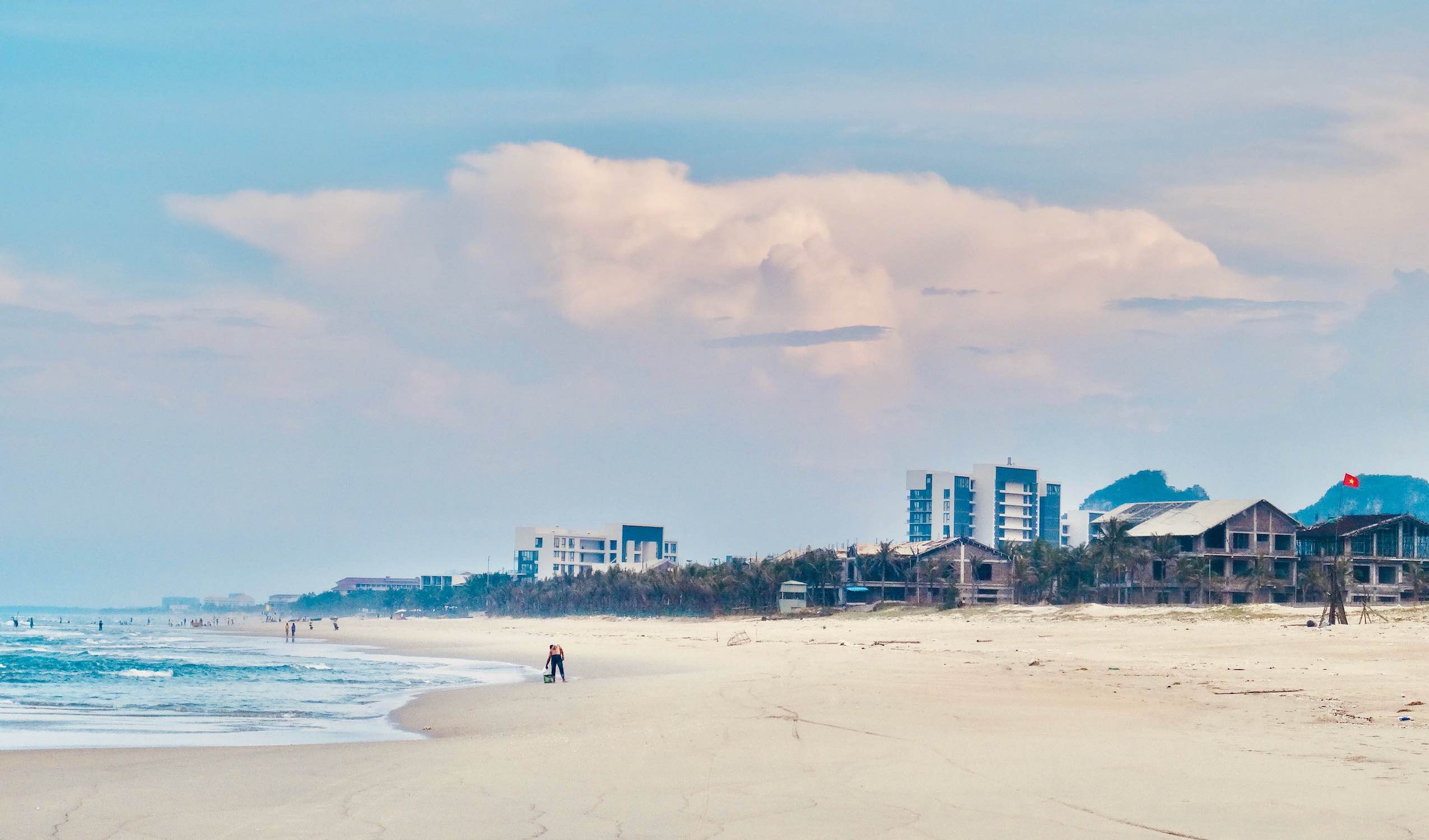 The sands were still gloriously peaceful. Bafflingly so considering these beaches sit on the doorstep of a monster city home to over 1.1 million people. Not that I was complaining, it was brilliant to have the place more or less to myself. Just the odd fisherman here and there dragging their long nets in the water as they searched for the right spot. 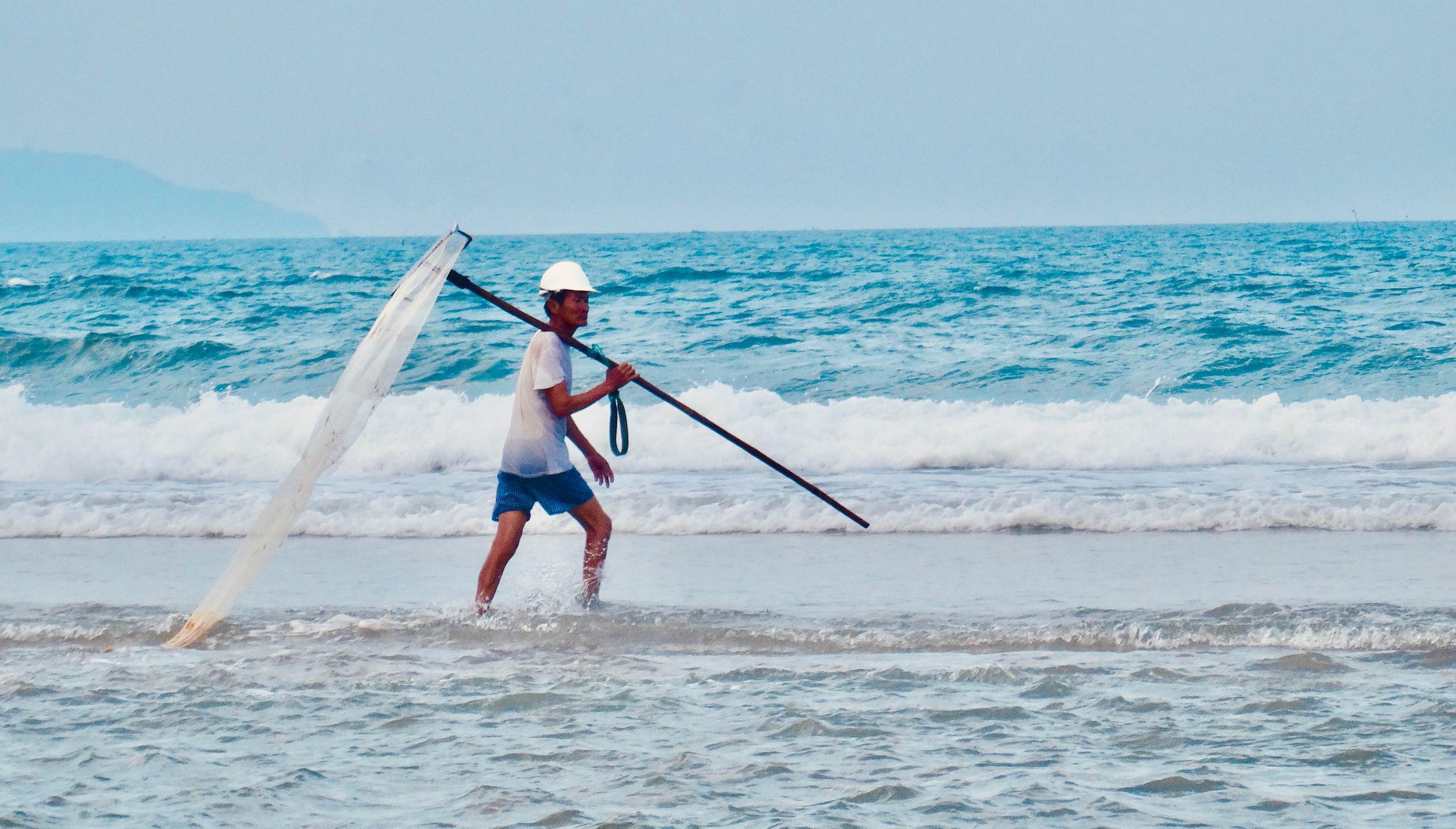 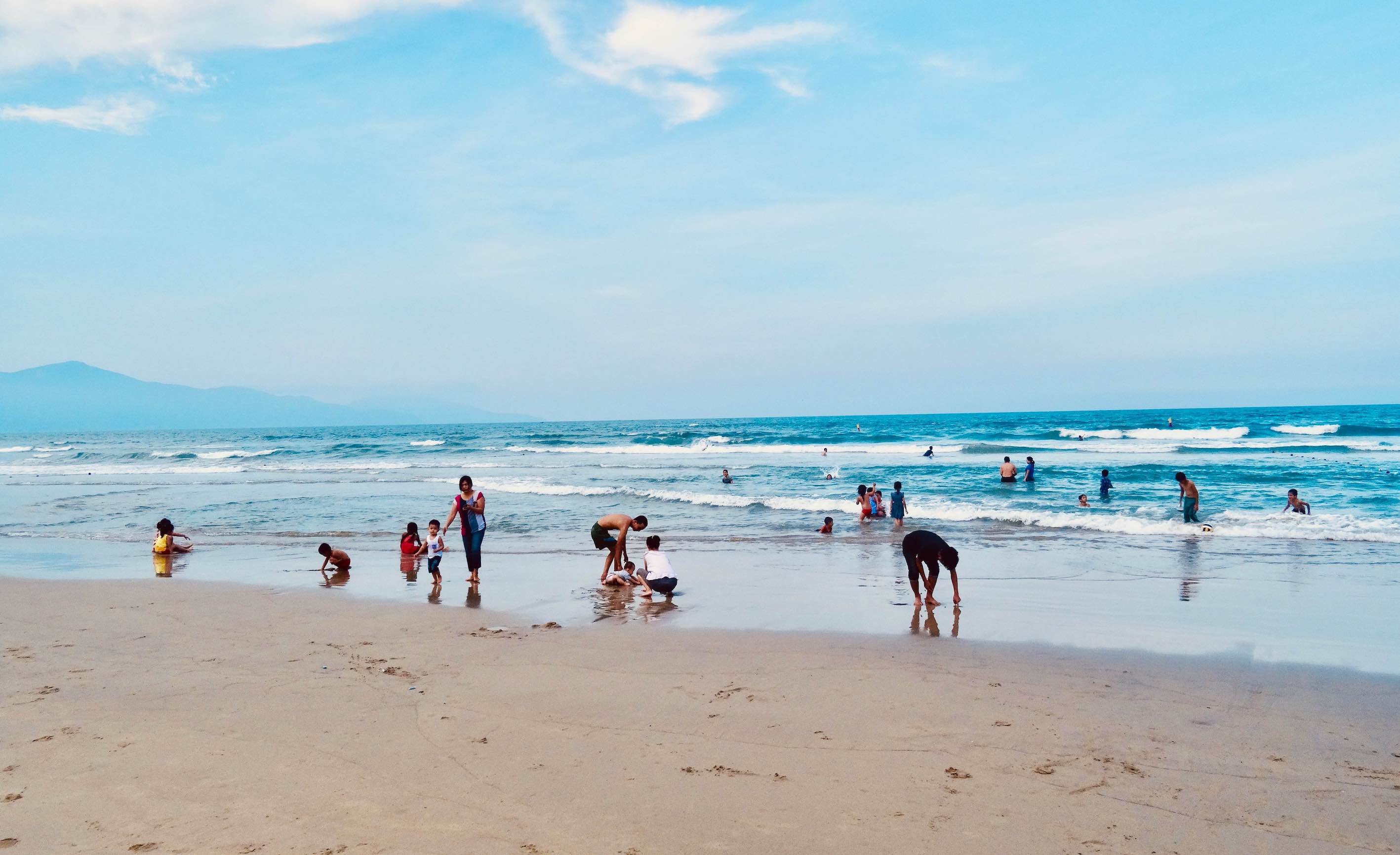 There were more fisherman too. One, impossible to ignore, shattered the peace and quiet for the first time that day by whizzing down the beach in his clattery motorbike. Luckily he was soon gone and calm returned. 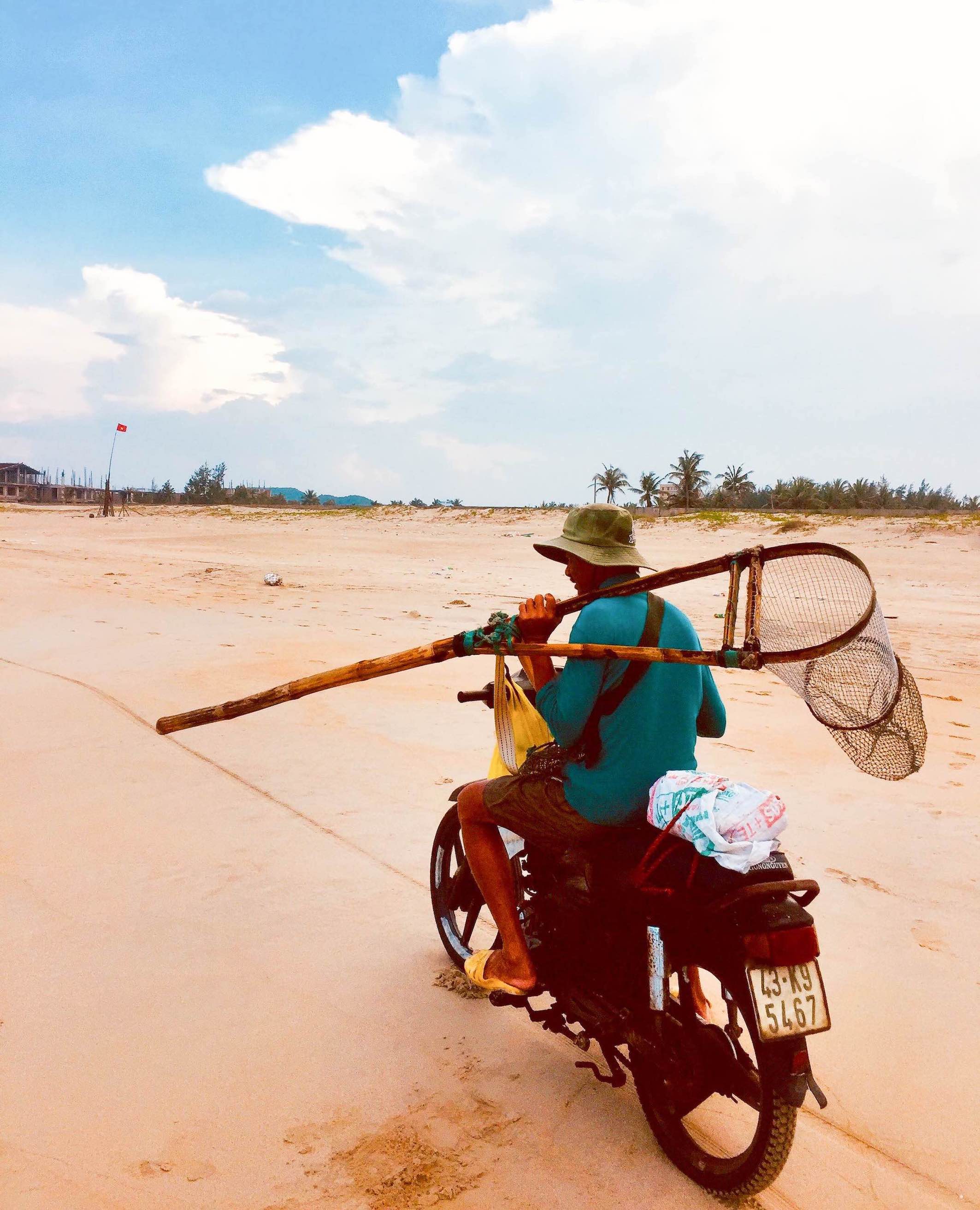 Some time later, I could hardly say when, I realised I was approaching Danang’s most popular stretch of the coastline. Yup, I could see and indeed hear the crowds from quite a distance. This, I supposed, was the end of the dreamy beach day I’d been having. Well, It had been great while it lasted. 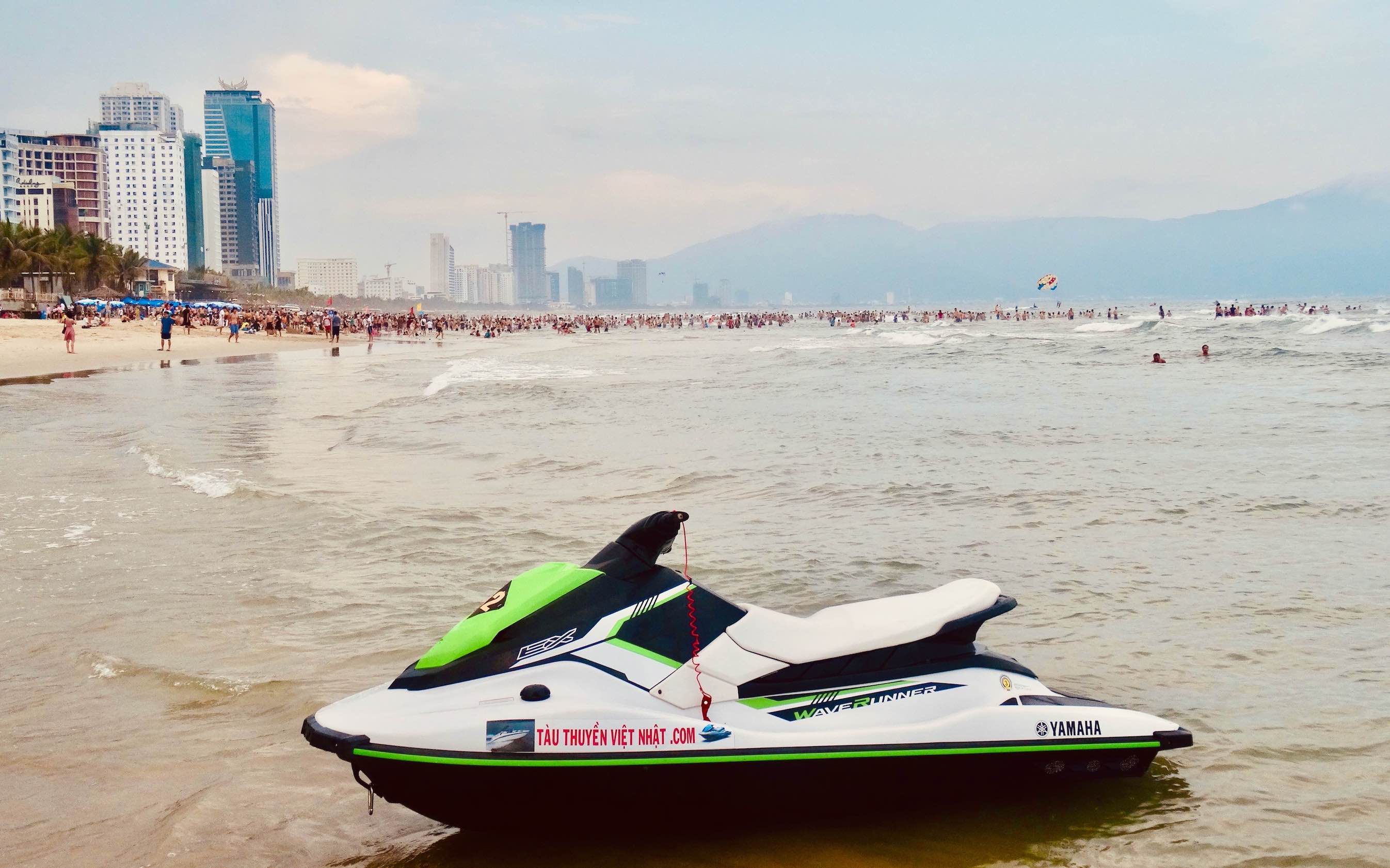 My Khe Beach is a fine stretch of the coastline once frequented by off duty US troops during The Vietnam War. It also has the nickname China Beach, a reference to the ABC TV series China Beach. This 4-season drama documented aspects of The Vietnam War from the perspectives of women, American soldiers and Vietnamese families. Parts of the show were based on Danang, its beaches and the nearby hospitals, air strips and military bases. 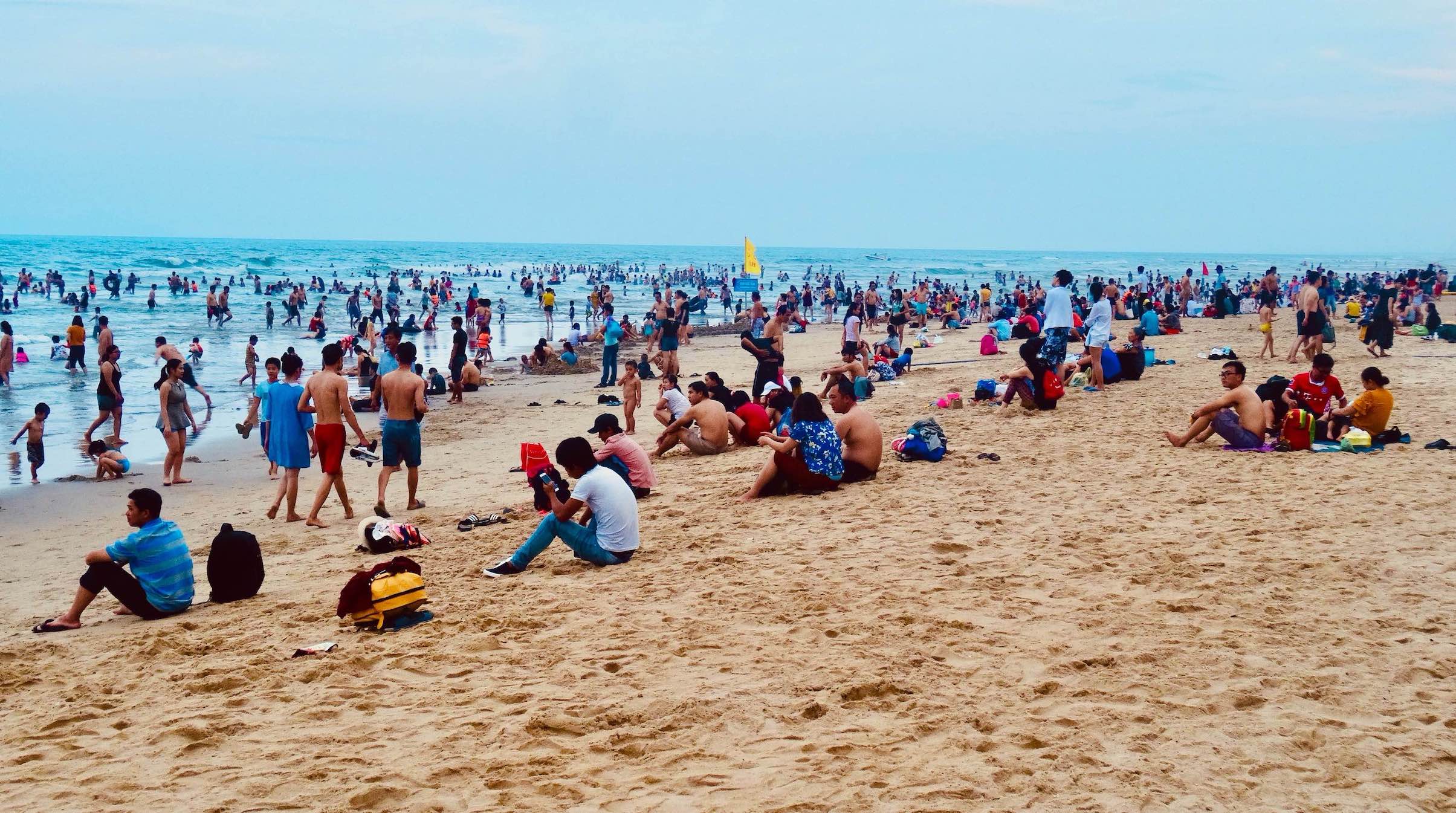 The Danang Coastline: My Khe Beach.

It was late afternoon by the time I joined the action on My Khe Beach. And boy was there a lot going on. A group of teens were having a football match, while a large party on a company outing posed for a string of cheesy photographs.

The Danang Coastline: My Khe Beach.

The surf had definitely picked up too. Hence I saw all kinds of water sports unfolding, from wind surfing and yachting to hang-gliding and parasailing. The afternoon light was now beginning to fade. It had gotten so grey that there wasn’t even much of a sunset. But that was ok, I’d had a wonderful day and felt ready for the walk back to my hostel. 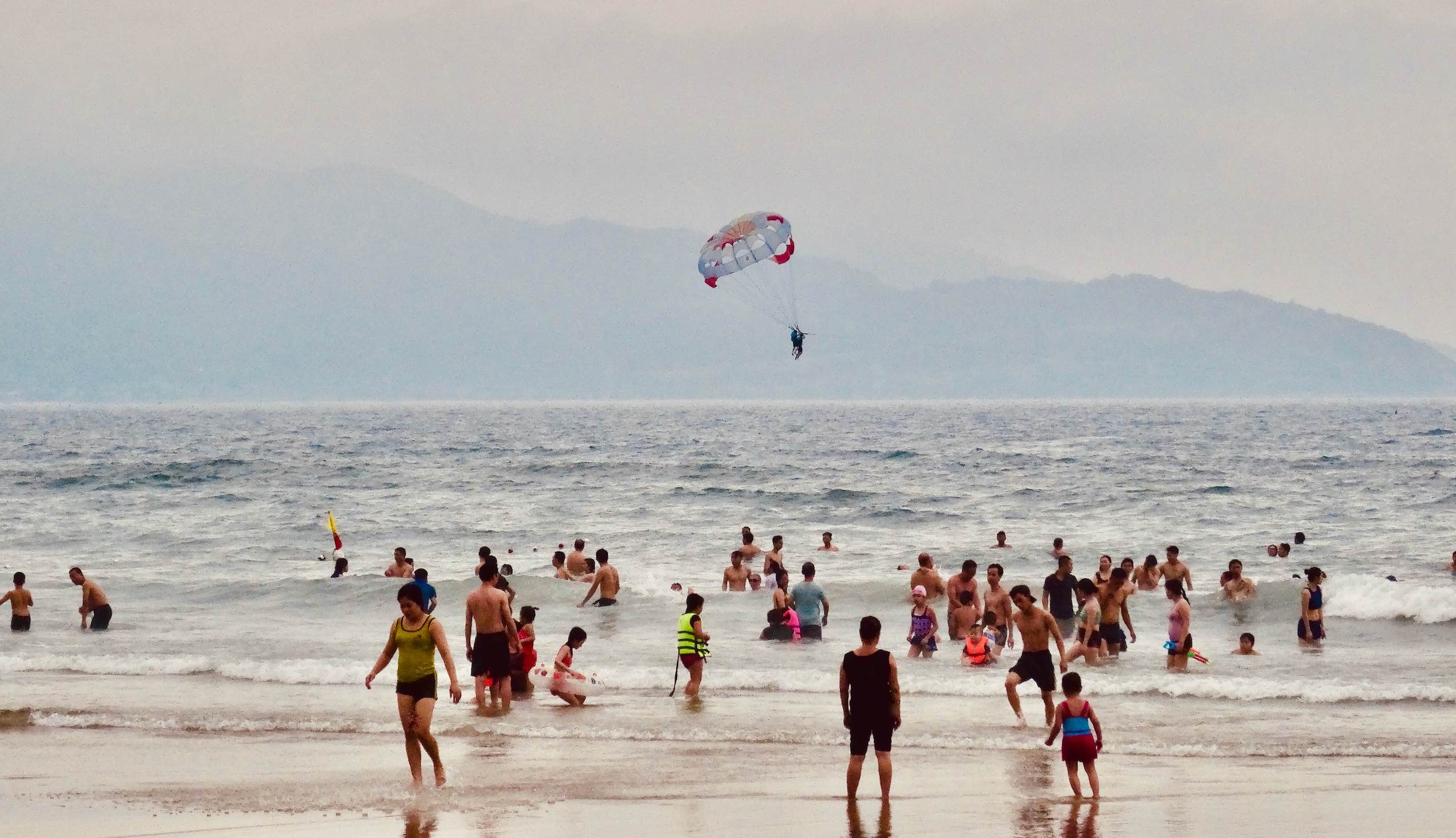 Taking one last look out to sea, I spotted Lady Buddha in the distance, the distinctive white figure on Monkey Mountain that stands as Vietnam’s tallest Buddhist statue. The mountain, as it turned out, would be tomorrow’s main adventure. 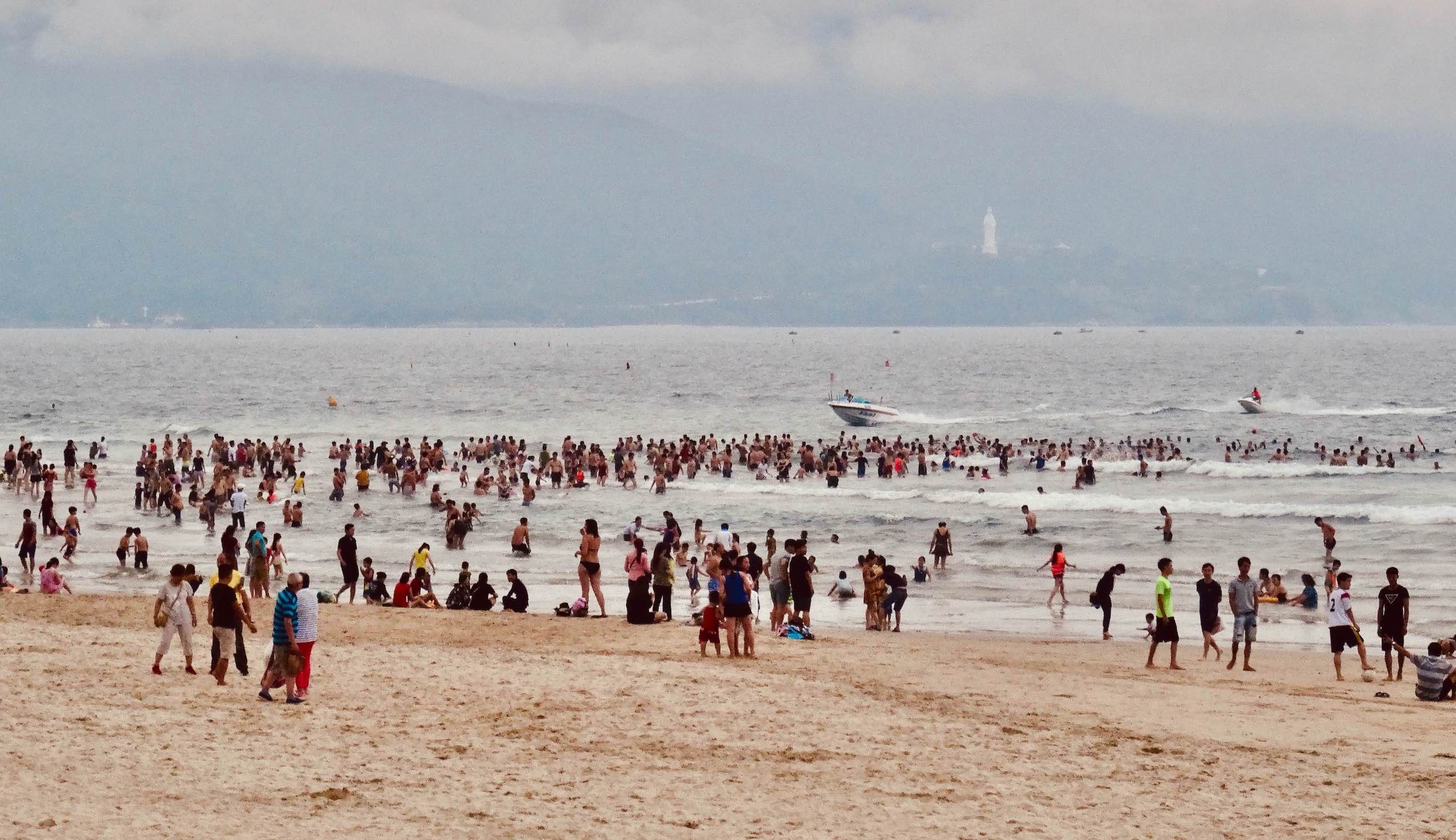 The air buzzing with children’s whoops, chatter and crashing waves, I made my way up My Khe Beach. Into the nearby city streets, over Dragon Bridge and back to the place that, for the next few nights at least, I called home.