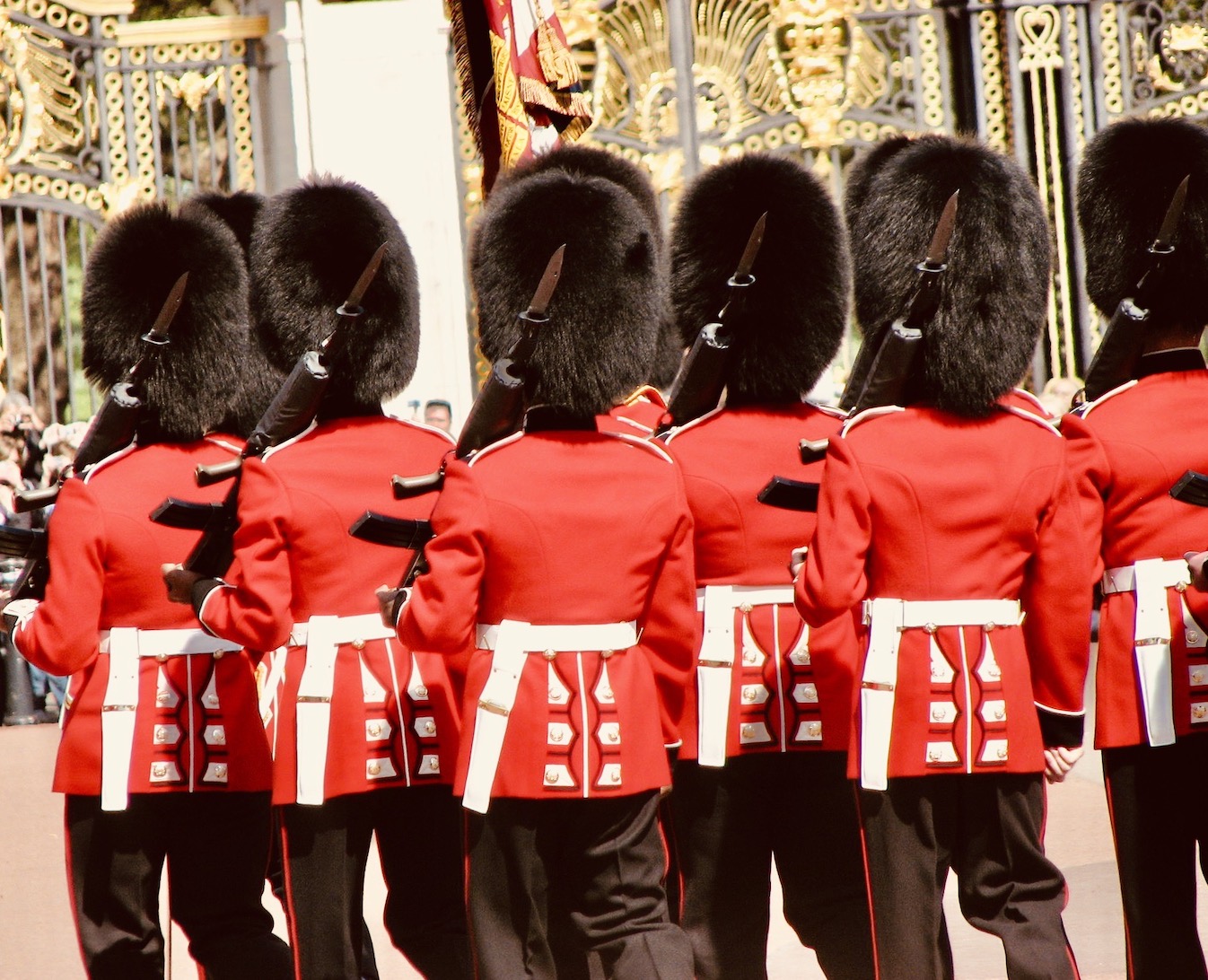 I have mixed feelings about the British monarchy. On the one hand much of The Royal Family’s roles and traditions seem … no longer of use… if you will. Sometimes when I see royal ceremonies and events I can’t help but feel, with no malice whatsoever, that it all looks a bit outdated in these modern times of ours. That it appears out of place, an institution that is somewhat irrelevant to large chunks of today’s society. 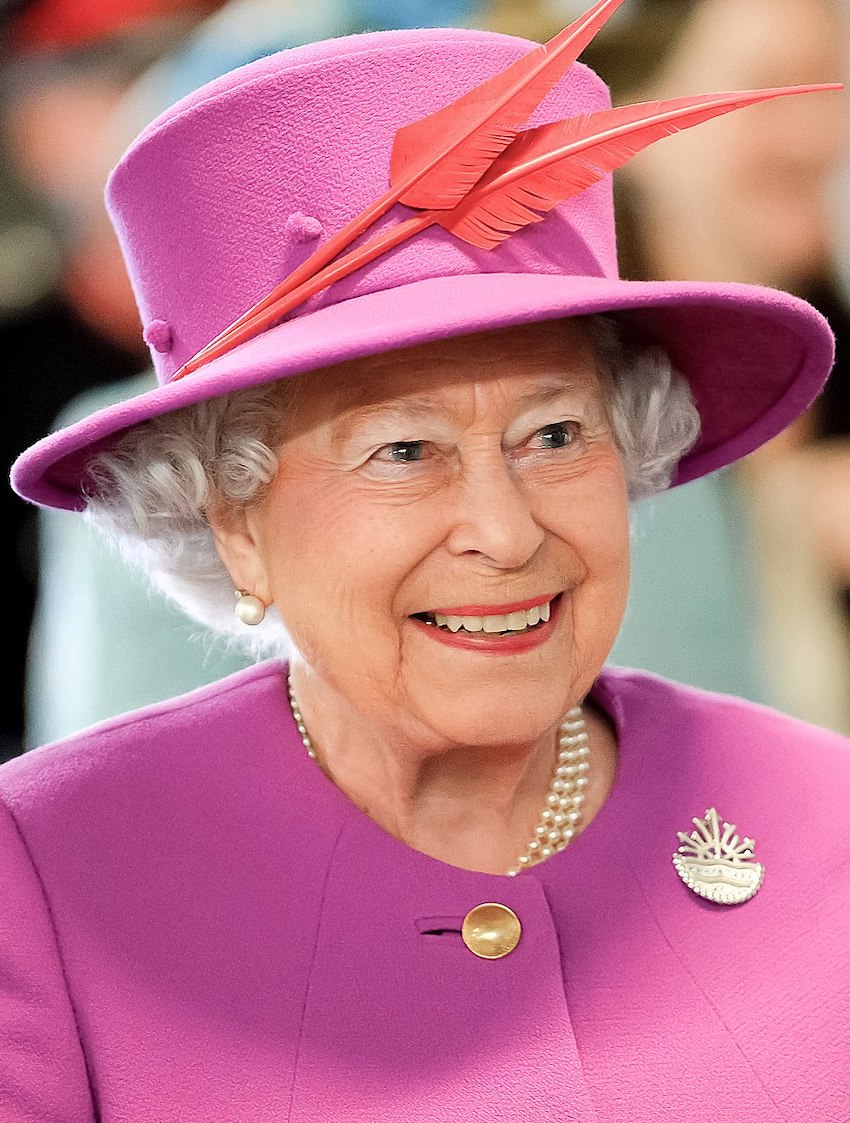 However, I am certainly no abolitionist. When you look at our Queen, it’s hard not to have at least some degree of respect for her achievements. For the times she’s lived through and the great shoulders she’s brushed with. Whatever you may think of her as a personality, there is no doubting that she’s lived an exceptional life. A life of duty.  Moreover, I think The Royal Family’s rich and colourful history has played a huge role in drawing in tourists from across the globe. 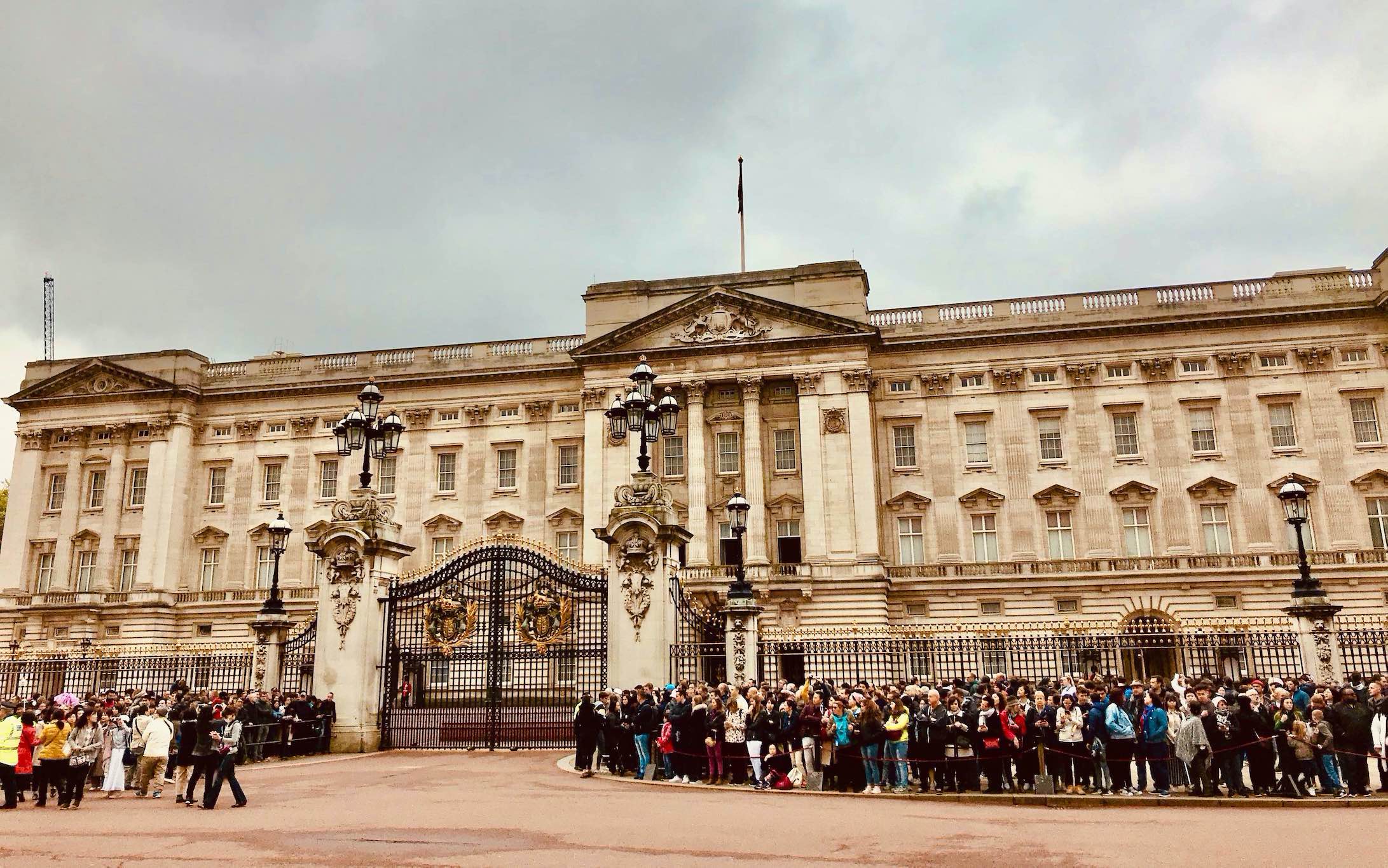 I could write so much more on this subject. But really it’s just a prelude to my visit to Buckingham Palace a few years back. Not into the palace, of course, as that’s a tricky thing to pull off. Rather, I wanted to see The Changing of the Guard, something I hadn’t done since my mum and dad took me as a kid. 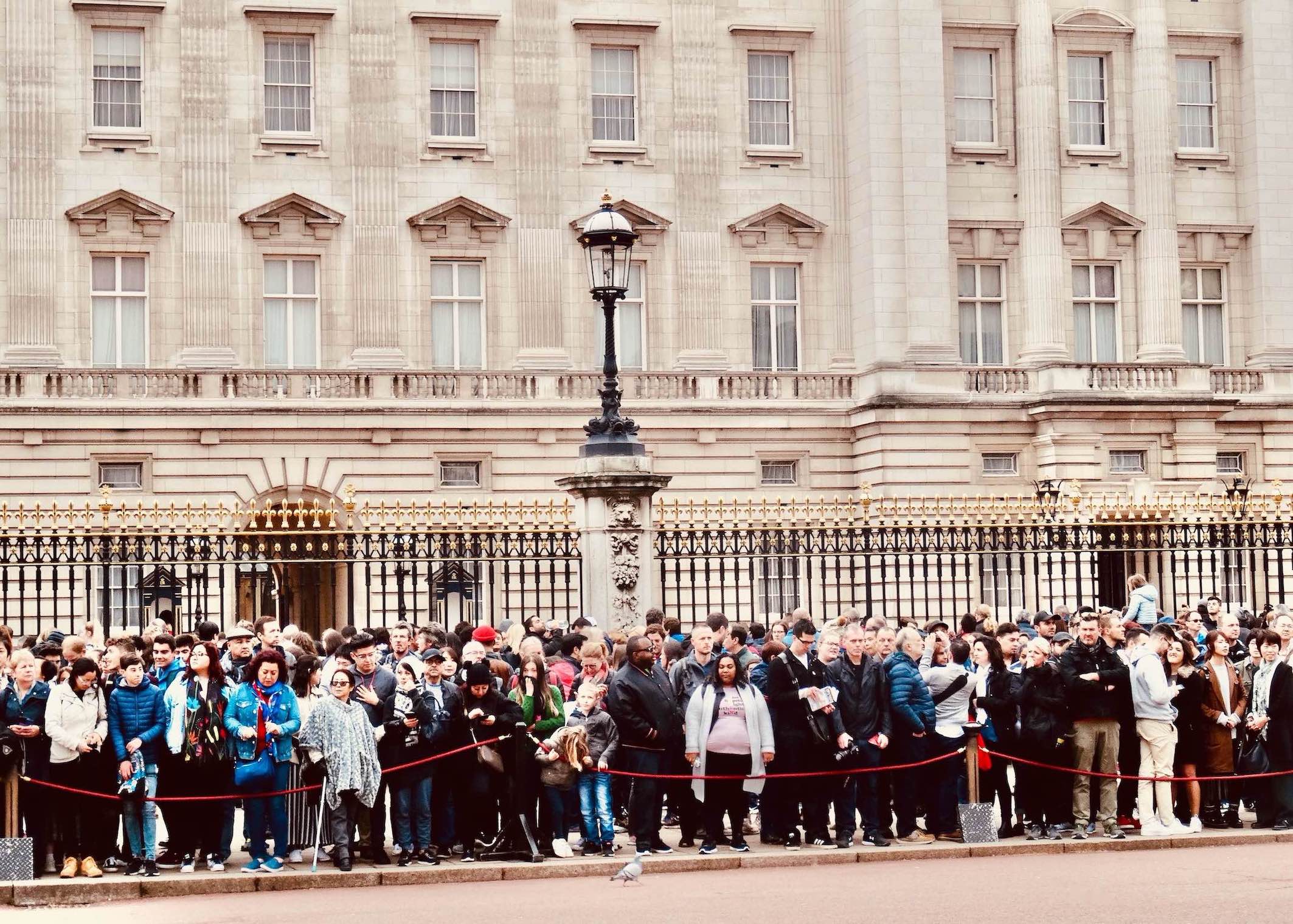 My memories of that childhood visit are very thin. Therefore, I thought I’d go back and see what I make of it all as an adult. To learn a bit more about this iconic world-famous tradition that stretches back over 360 years. The handover takes place every day, weather permitting, at 11:00. Hence I thought I was being clever by rolling up an hour beforehand to get a good spot. Silly, silly me. 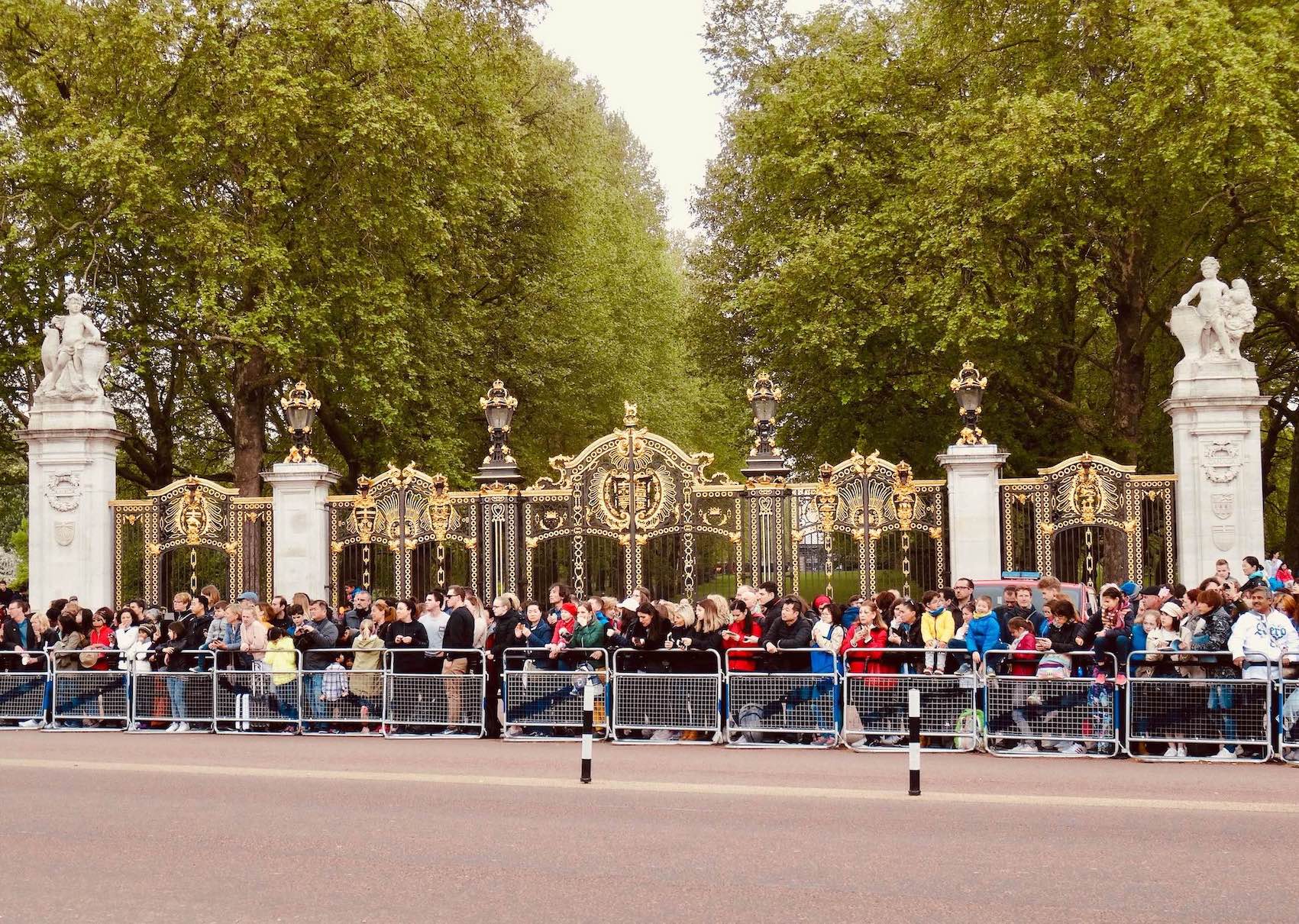 If you really want to secure a prime position, you’ll have to get here way earlier than that. When I arrived that morning I found the crowds already deeply set in. In fact, the line of patiently waiting tourists ran all the way down The Mall, the long road that connects the palace’s western end to Trafalgar Square via Admiralty Arch. 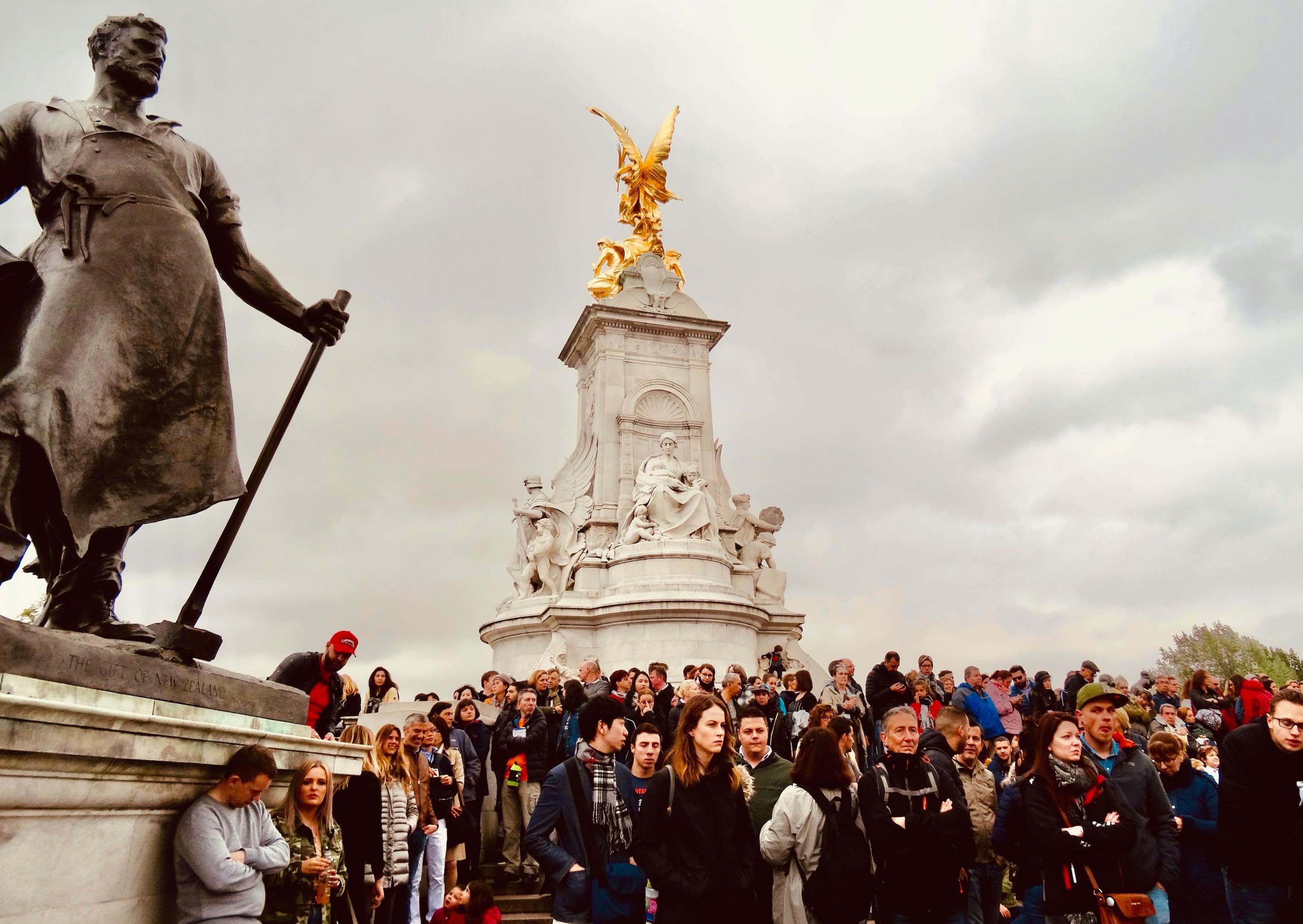 Determined to get closer to the action, I picked my way through the masses towards Victoria Memorial, which faces the palace’s main gates. This elegant bronze and marble memorial wasn’t simply busy, but seemingly occupied by chattering tourists of varying nationalities. 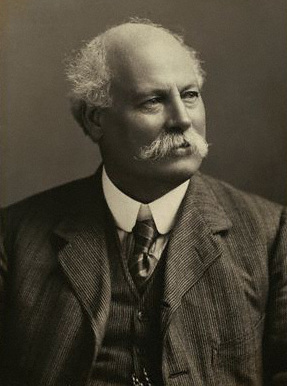 Unsure of my next move, I took a moment to appreciate the memorial. Unveiled on the 16th of May 1911, the English sculptor Thomas Brock created the piece in honour of Queen Victoria. Its central pylon, made from Pentelic marble, props up the stunning gilded bronze sculpture Victoria, the Goddess of Victory. 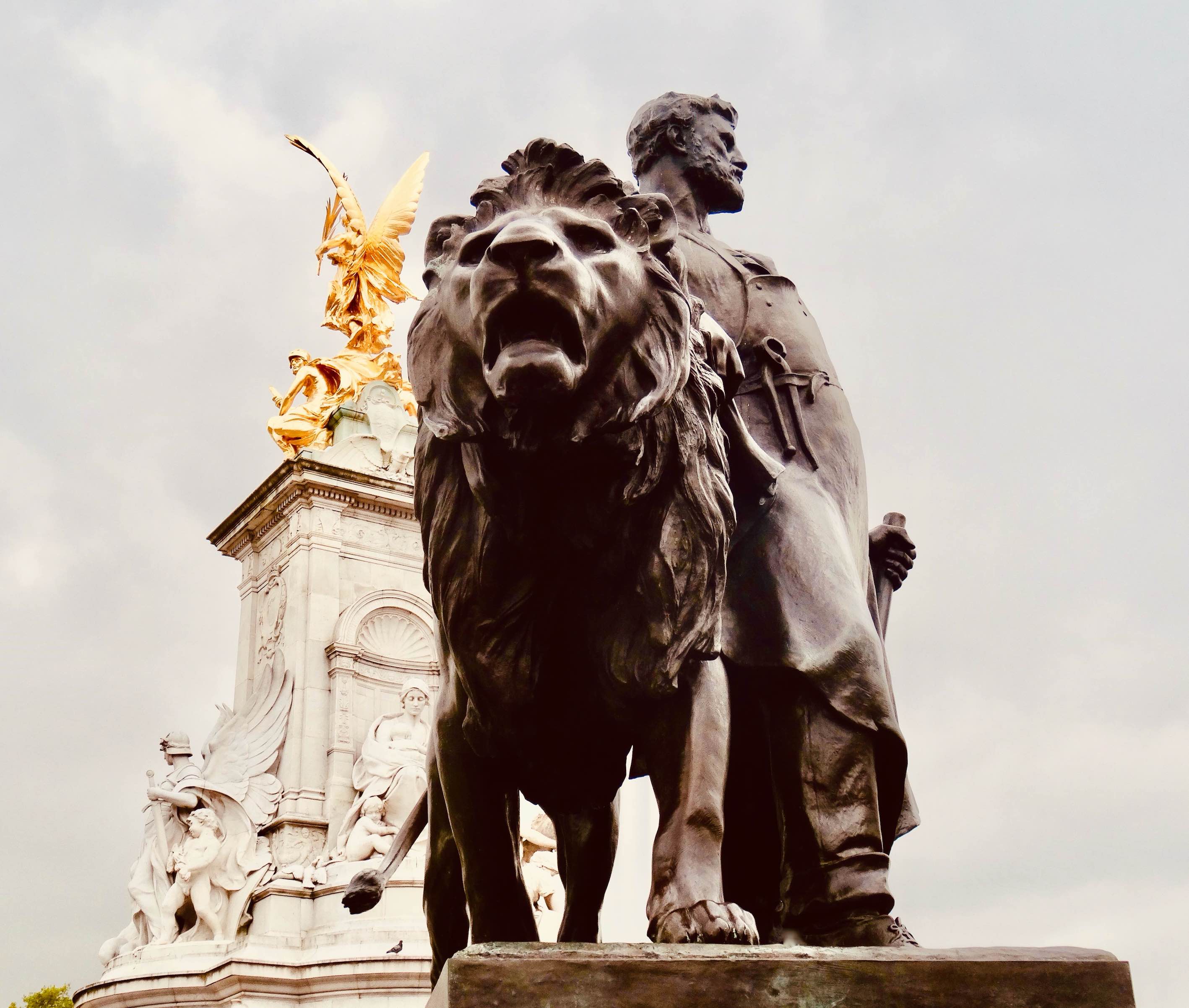 A number of dramatic bronze figures guard the four corners of the memorial. Accompanied by lions, three of the statues represent Peace, Progress and Agriculture. The fourth, pictured above, is of a blacksmith holding a hammer and scroll. He represents Manufacture. 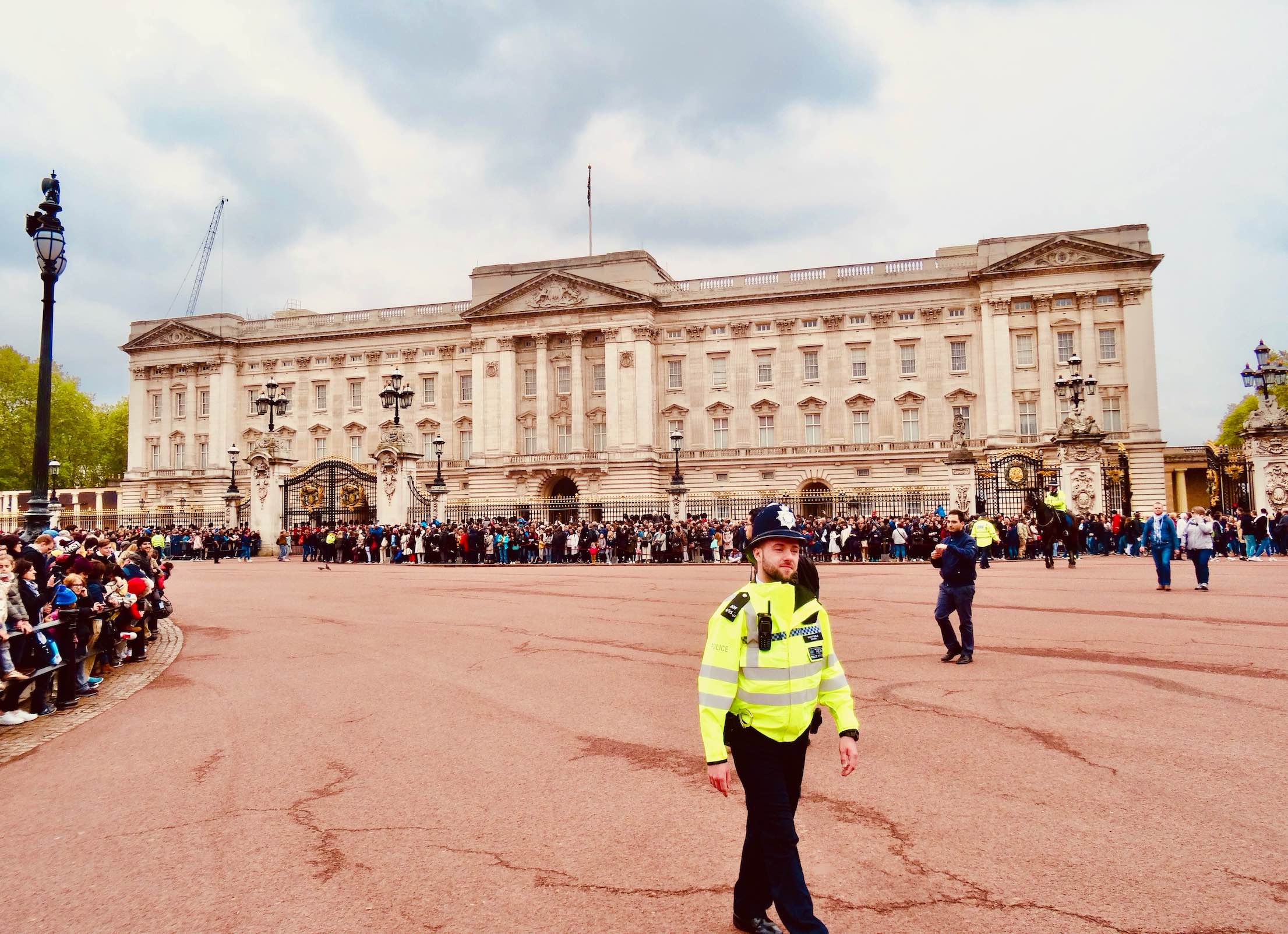 With another twenty minutes until showtime, I entertained myself by discreetly sneaking closer to the front rows behind the security barriers. This proved easier than expected, especially by targeting those pockets of people who were too busy playing with their smart phones to notice me slinking between them. 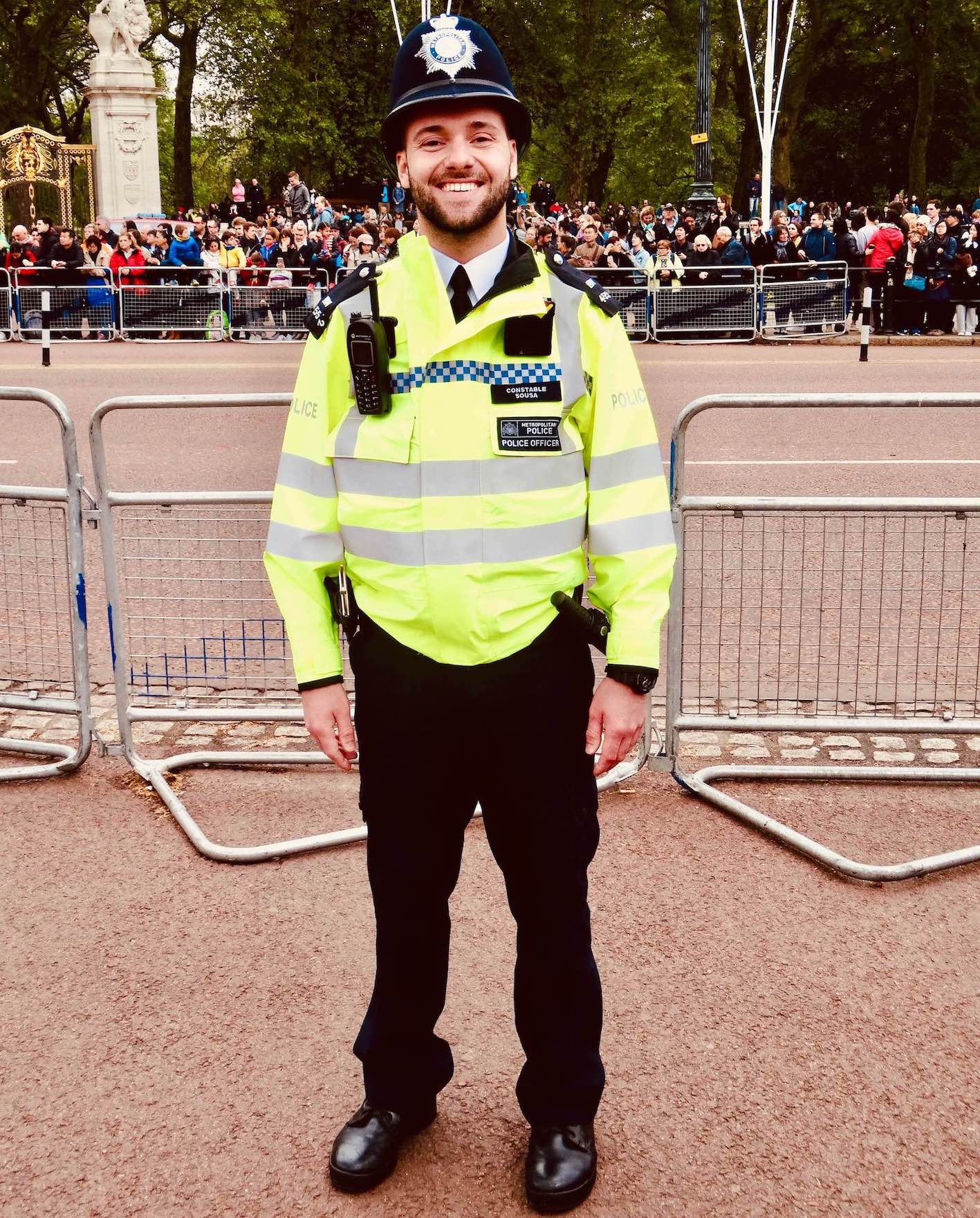 Eventually, I squeezed myself into a half-decent spot. Amusingly, a policeman had been tracking my movements and jokingly called me out on it. “I know what you’re up to!” he chuckled. I was totally busted, though we both had a good laugh about it and he gamely posed for the above photograph. 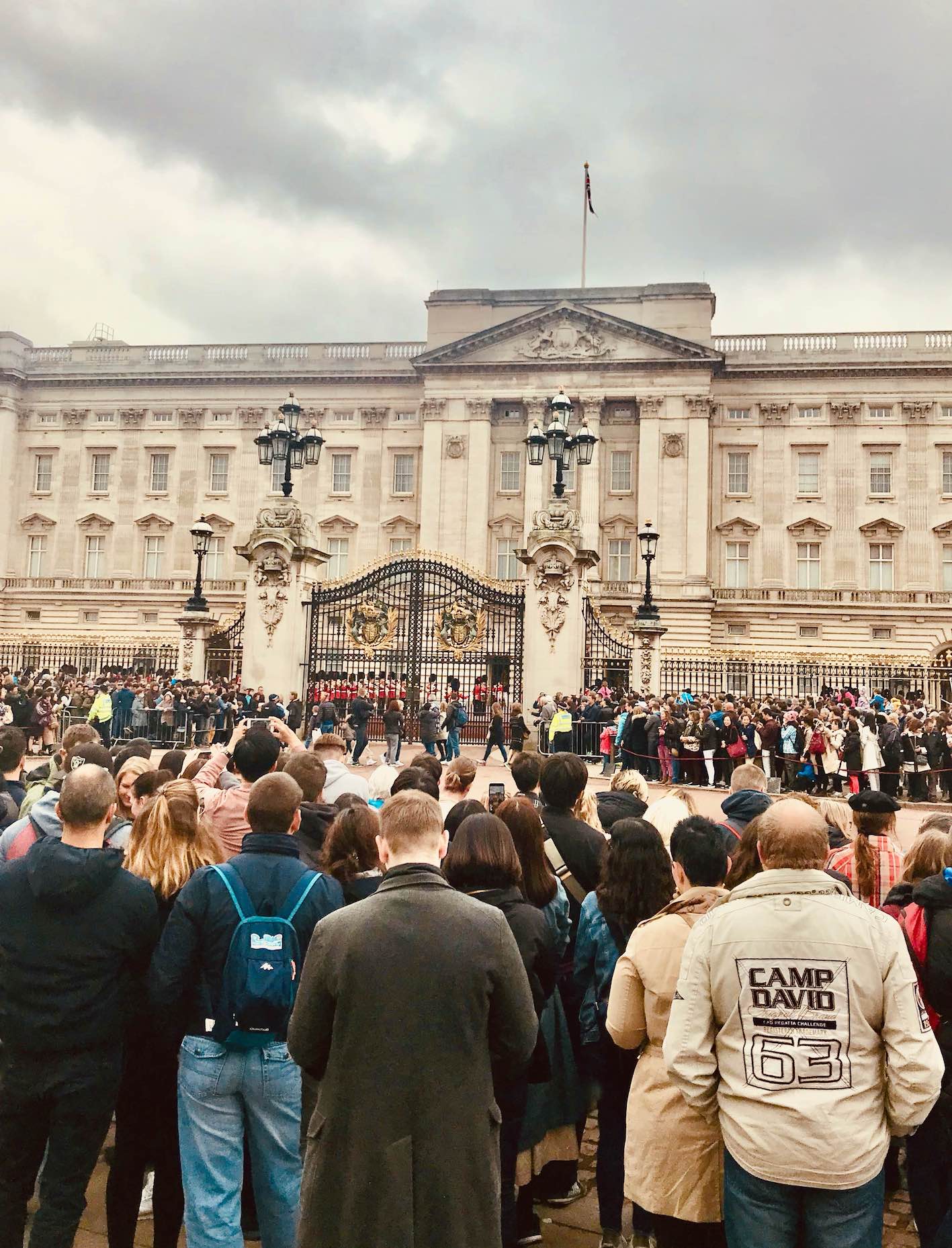 I was quite unprepared for the chaos that broke out once the distant sound of the marching band floated over the assembled crowd. Suddenly, the bubble of bodies I found myself within shifted, as people jostled and pushed forward. Soon enough the music grew louder, complimented by the rhythmic thump of boots on stone. 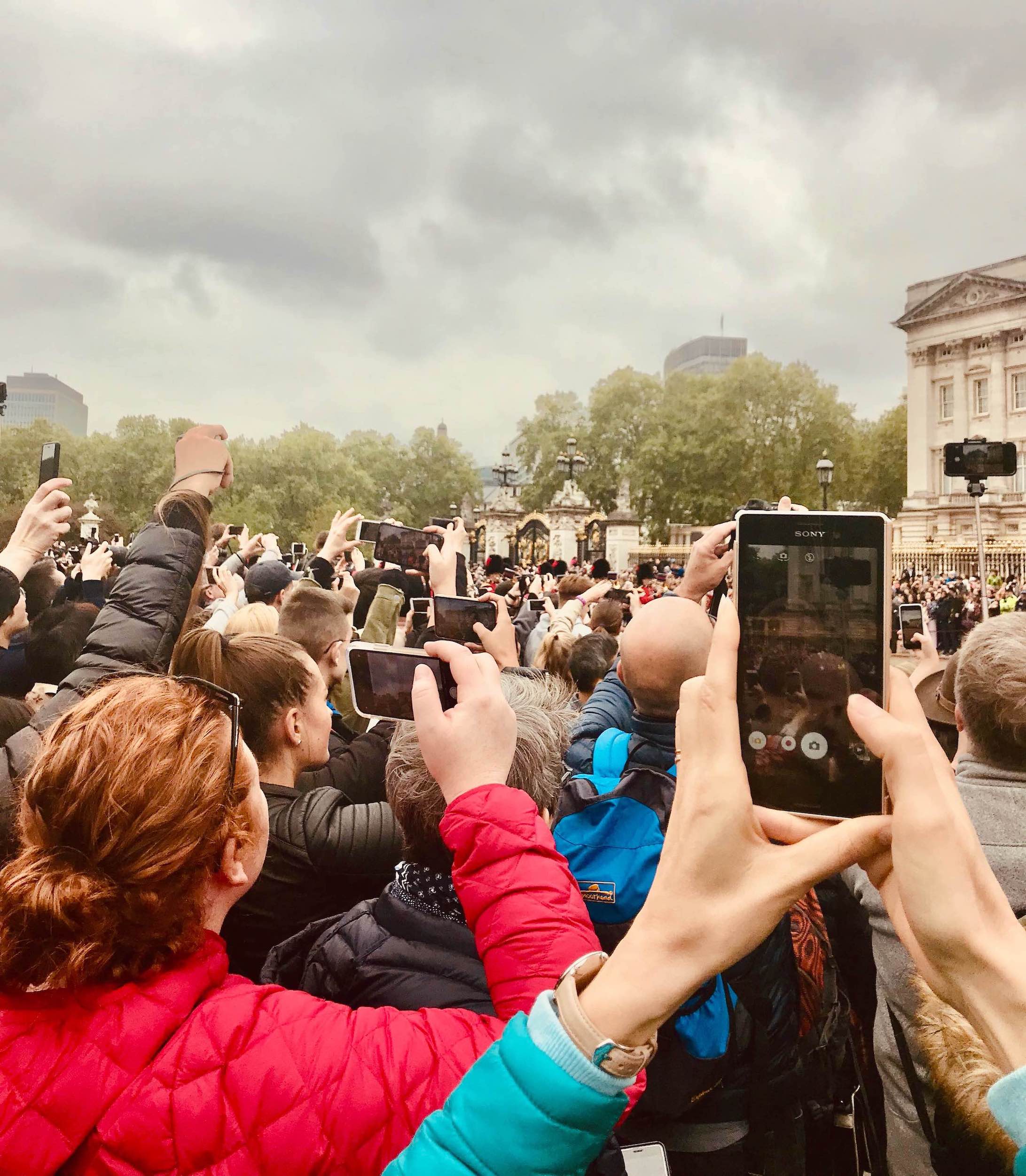 A sea of phones.

Yup, The Changing of the Guard had begun! Unfortunately, my view of the whole thing was somewhat limited because, despite my height, I had no clear path of vision through the rolling sea of mobile phones. Ah, nuts.

Oh well, it gives me a chance to give you some history I suppose. Basically, a unit of foot soldiers called The Queen’s Guard protects Buckingham Palace. They’ve been looking after The Royal Family and their various palaces since 1660. Instantly recognisable for their red tunics and bearskin hats, the Queen’s Guard soldier has become one of London’s most cherished icons. 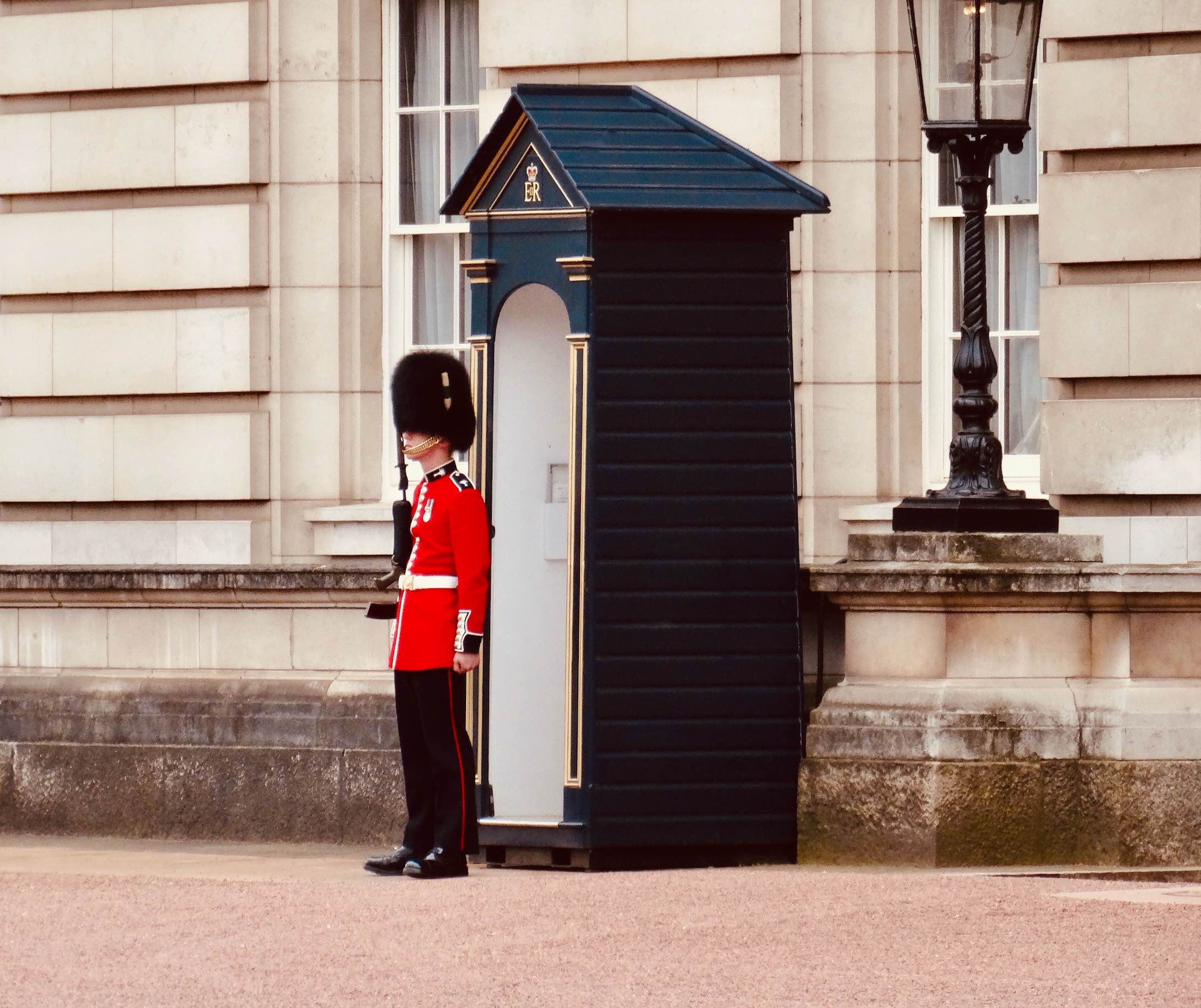 The Changing of the Guard is every bit as simple as it sounds. In short, the ceremony sees a New Guard of soldiers arrive to relieve the current soldiers (Old Guard) from their duty.

To spice things up, a full brass regimental marching band from the nearby Wellington Barracks comes with The New Guard. Having failed miserably to get decent photographs, I did at least manage to raise my own phone high into the air and capture a video of the soldiers and band entering the palace.

Tourists really have to be quick to get their photos and videos. Indeed it takes just a few minutes for them to march by and enter the compound’s North Gate.

After that only visitors pressed up against the palace railings can see what’s going on. For the rest of us, across the road by Victoria Memorial, it was a case of simply listening. It’s basically lots of barked orders and a few short bugle blasts as The Old Guard steps off and The New Guard steps on. 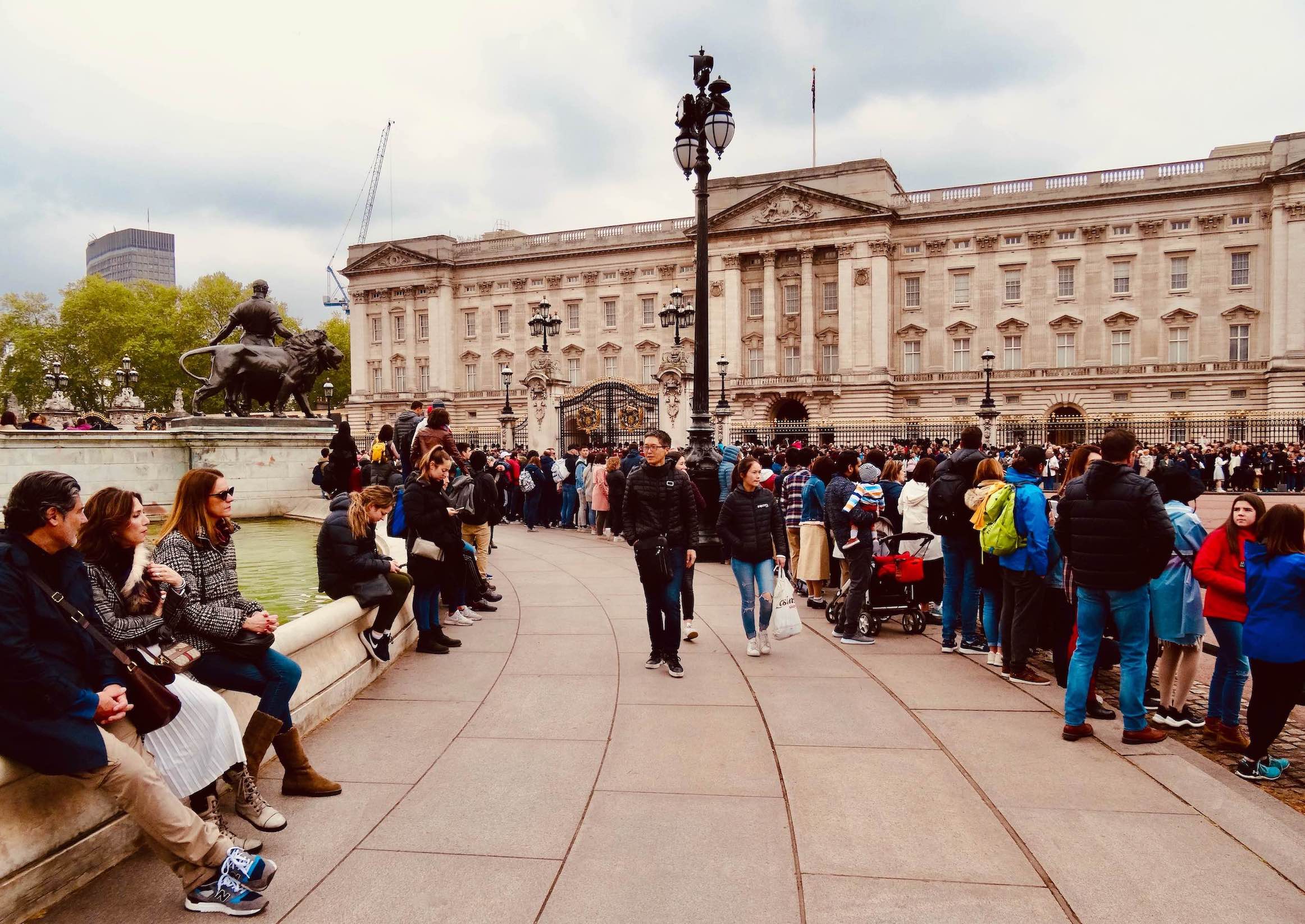 And then the band started up again and The Old Guard began marching out of The Palace and up The Mall. This signalled the beginning of more madness as the assembled crowds shifted position to catch the action.

In one mad moment, a few overexcited Spanish tourists actually ducked under the barriers to cross the road for a better angle of the band, who were rapidly marching towards them. A policeman quickly stepped in to speed them up, while one of the soldiers fired off a warning shout: “Make way for the Queen’s Guard!”

While I was hardly bowled over by The Changing of the Guard, it is nevertheless a charming experience that everyone should see at least once in their lives. If you’re organised and patient enough to come really early and stand around for a few hours, it will no doubt be a better experience right up close to the action. 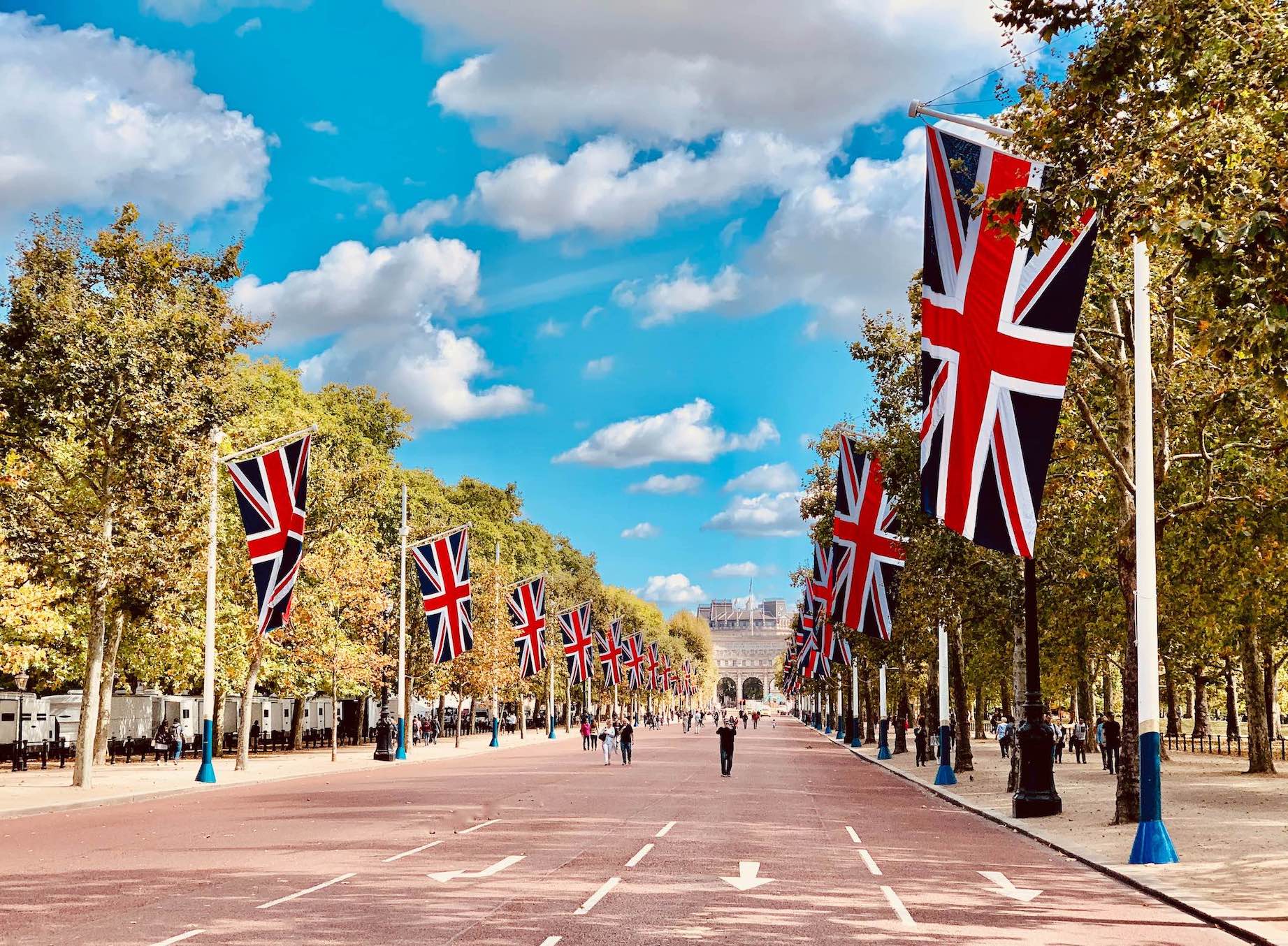 The Mall on a quiet sunny afternoon. Much more my cup of tea.

If you’re planning to catch the ceremony, it really pays to check the day’s times in advance. Indeed you might find that the public handover is cancelled due to heavy rain. Or that the times have changed due to city/royal events.