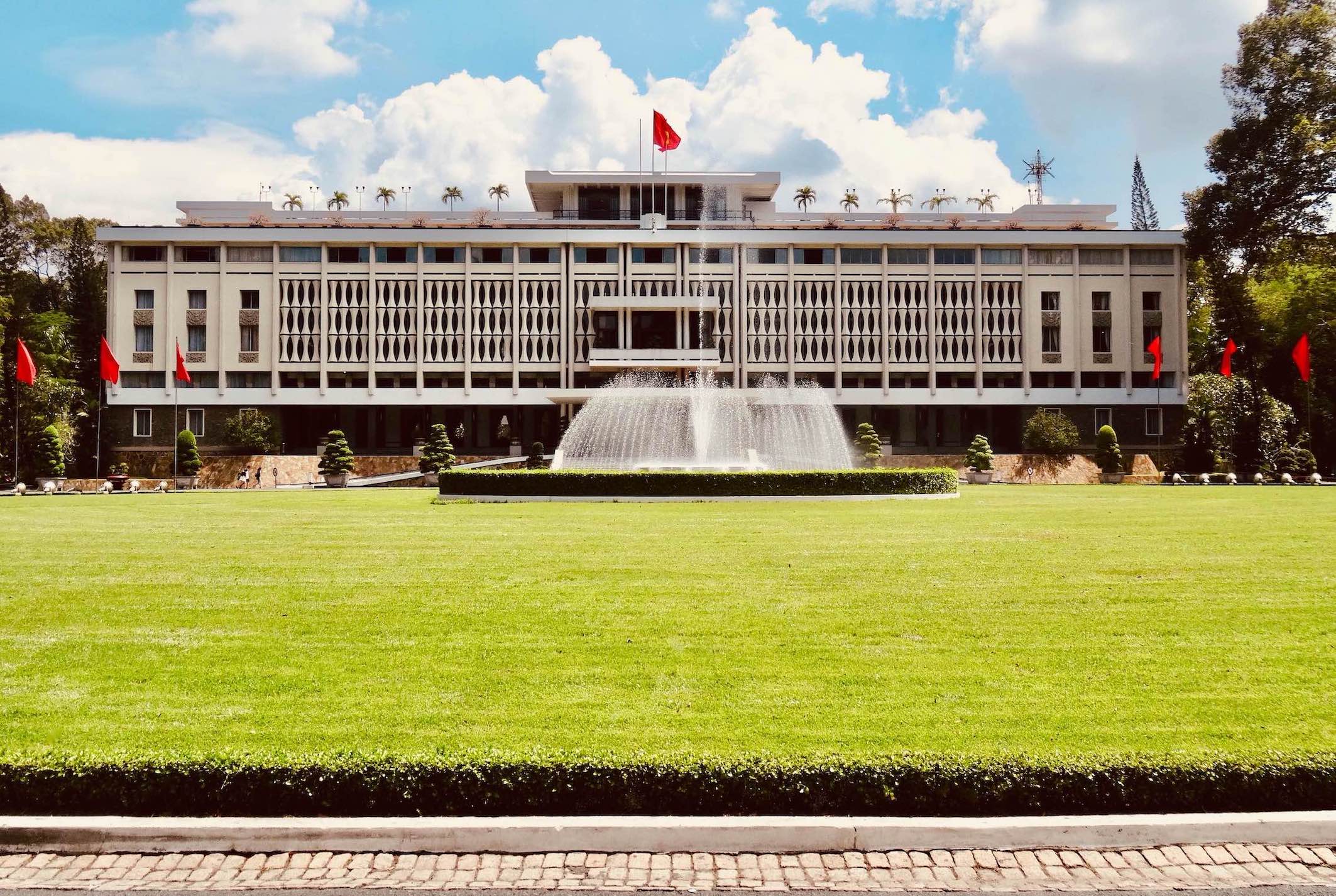 I have to admit that I did not fall in love with the city of Ho Chi Minh. For the most part I felt it lacked the charm of its sister metropolis, Hanoi. In fact, right from day one I thought there was just a touch of Beijing and New Delhi to the place. You know, in terms of its relentless traffic and frenetic crowds. The intense pollution and the sprawling, uncompromising nature of the place. 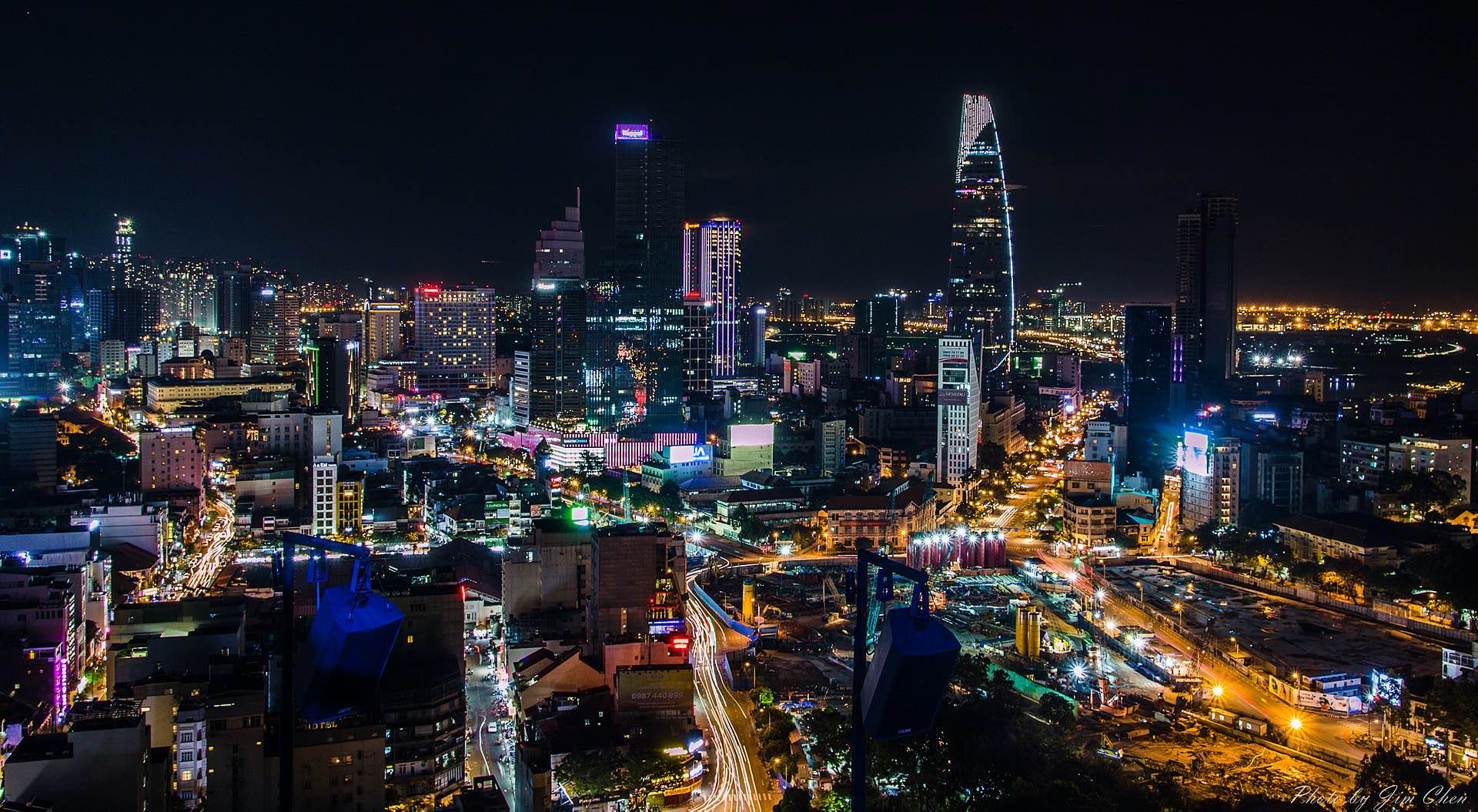 Ho Chi Minh: Not the fainthearted.

Nevertheless, HCM’s essential Vietnam War sights alone justify pencilling in at least two to three days. The first site I crossed off was Reunification Palace, also known as Independence Palace, Presidential Palace and Reunification Convention Hall. And then you’ve got the building’s original names, Saigon Governor’s Palace and Norodom Palace. Are you confused yet? 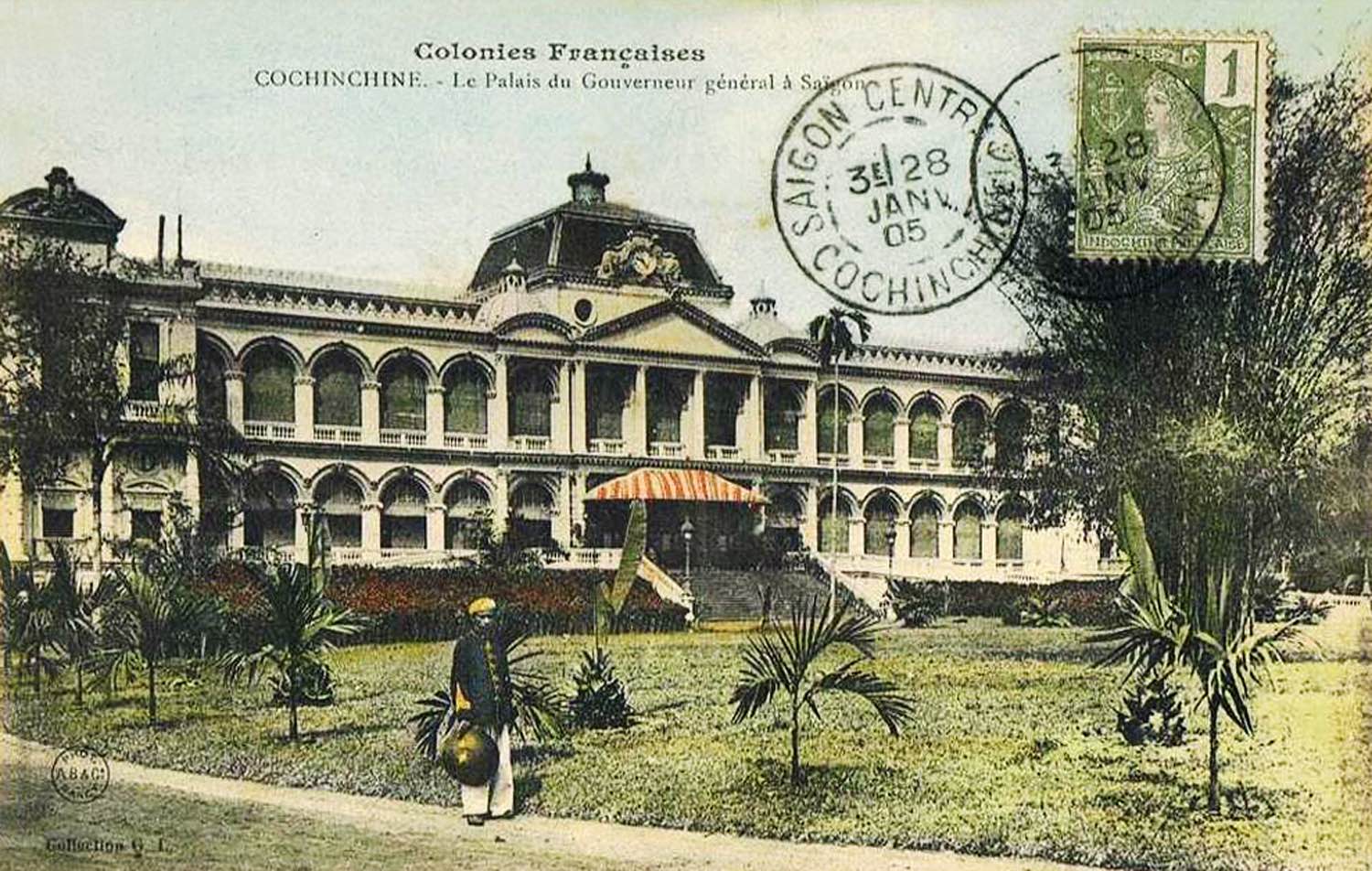 The site’s history is a long and complicated one. Finished in 1873, the French constructed the palace to celebrate their recent conquest of southern Vietnam. This, they figured, would be a grand centre of bling in which they could house The Governor of French Cochinchina, a dude by the name of Marie Jules Dupré. 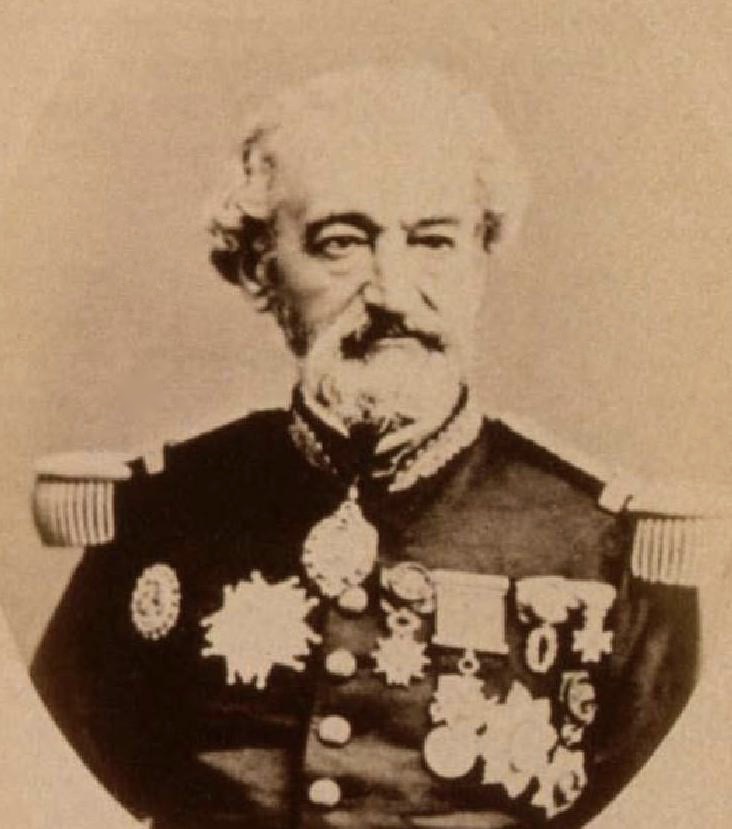 From here it’s easy to get bogged down in the dense backstory. I’ll try to summarise it as briefly as I can. By the late 1880s, the political landscape had changed. French Cochinchina had become part of the Indo-Chinese Union, which resulted in a demotion of sorts for the governor. As a result, he had to move into less fancy lodgings. 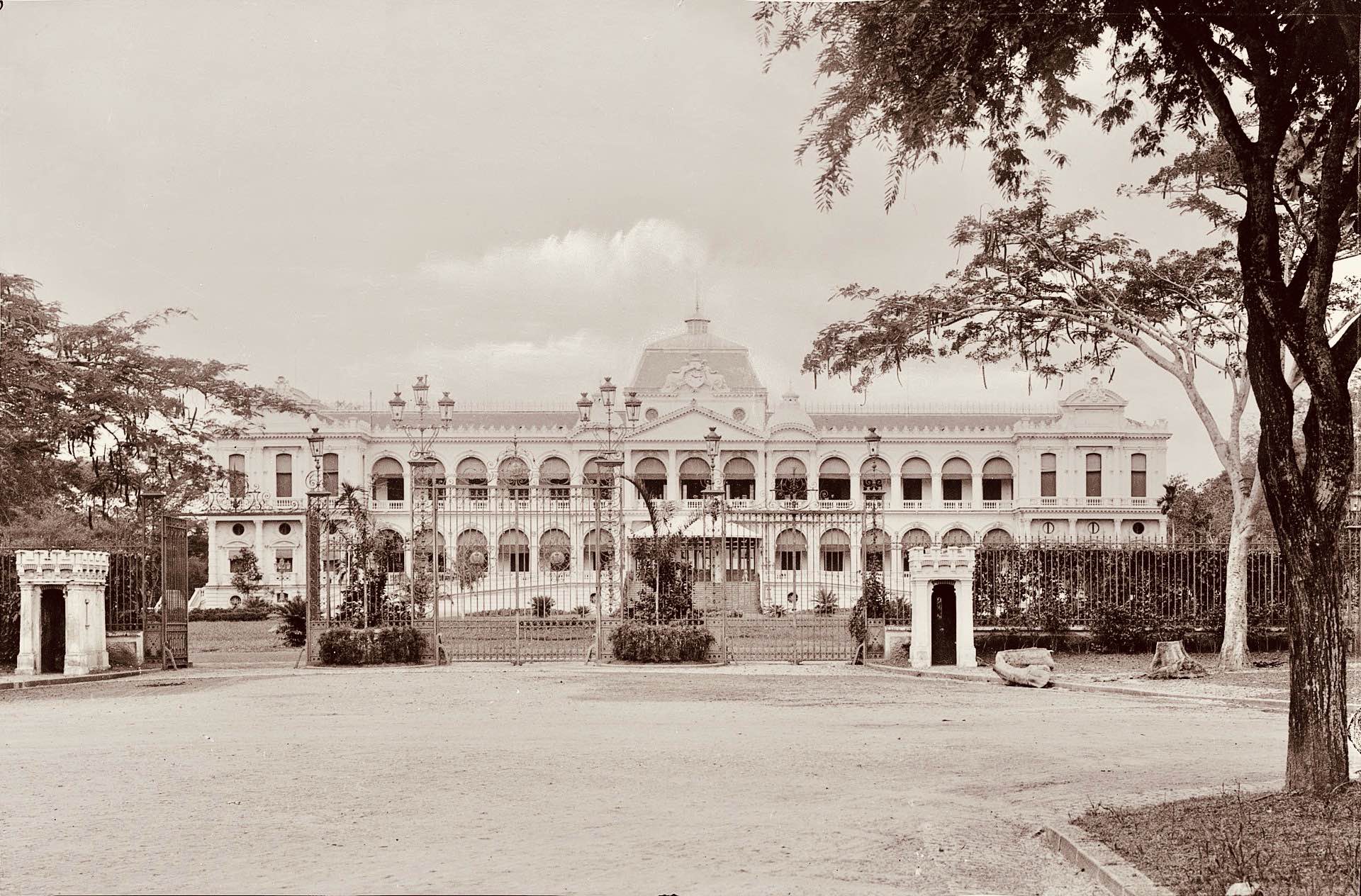 This was good news for the governors of French Indochina! Indeed it was they who lived here until 1945 when the Japanese swept in with a successful coup during World War II. Thus Japanese officials called the palace home until the Allied Forces secured their surrender and it went back to France again. Phew, bear with me while I break for a cup of tea. 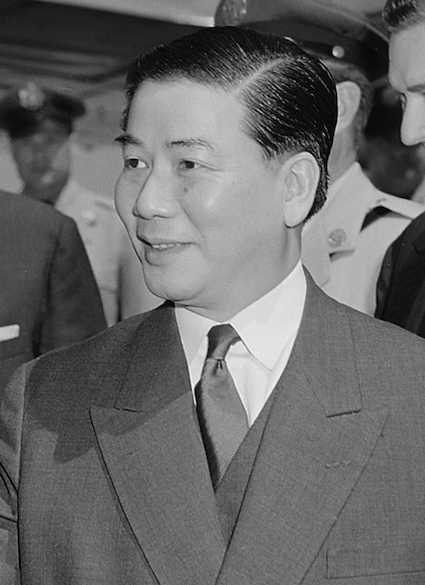 In 1954 the French finally called it a day in Vietnam and in September that year the building fell into the hands of Ngo Dinh Diem, the Prime Minster of the State of Vietnam. The following year he became the first president of The Republic of Vietnam after defeating former Emperor Bao Di in The 1955 State Referendum. This is when Diem renamed the building Independence Palace.

Unfortunately, the doomed palace lasted just another seven years. On the 27th of February 1962 two rebel pilots went against Dinh’s orders and bombed the old joint, instead of attacking the Viet Cong as they’d been instructed. President Dinh survived the bombing, though his palace sustained heavy damage, losing the entire left wing. 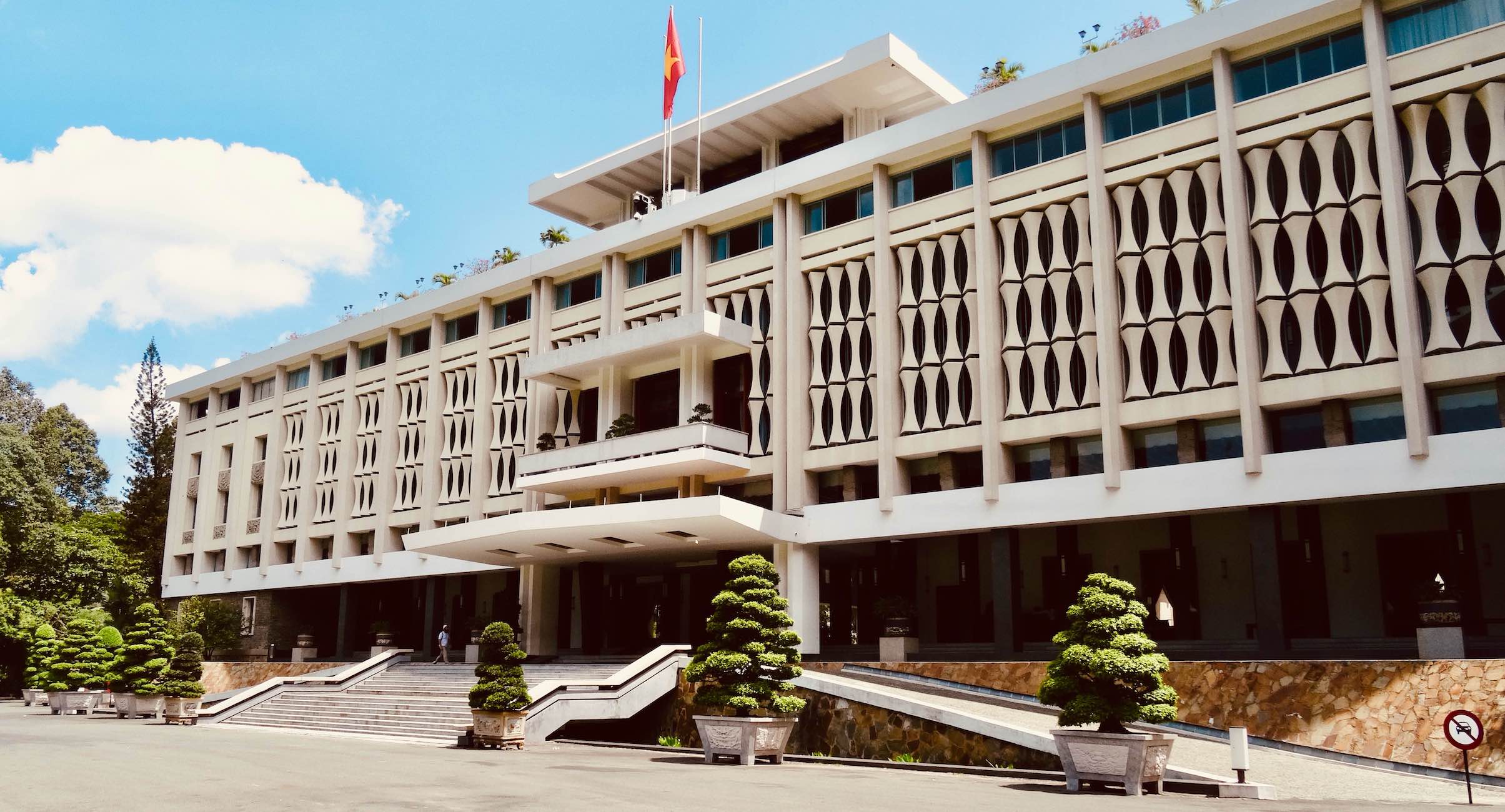 Rather than restore the place, Dinh arranged for its demolition. In its place, he had a new palace built and that’s the structure visitors to Ho Chi Minh see today. Dinh hired the renowned Vietnamese architect Ngo Viet Thu to oversee its creation in the modernist style. The project eventually came to completion in October 1966. 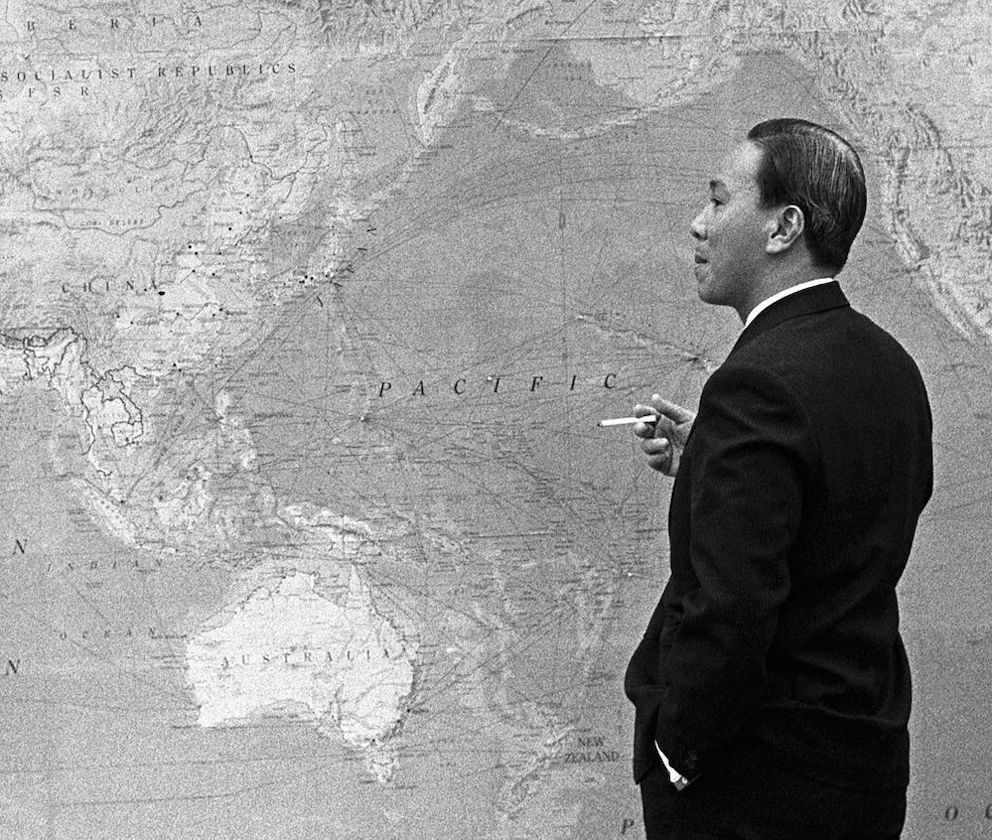 Sadly for Diem, he didn’t live to see it finished. In November 1963 General Duong Van Minh led a coup against the president, who was murdered alongside his brother and chief adviser Ngo Dinh Nhu. And so it came to be that General Nguyen Van Thieu, chairman of the National Leadership Committee and head of the military junta, enjoyed the new palace as his presidential home and offices from 1967 to 1975. 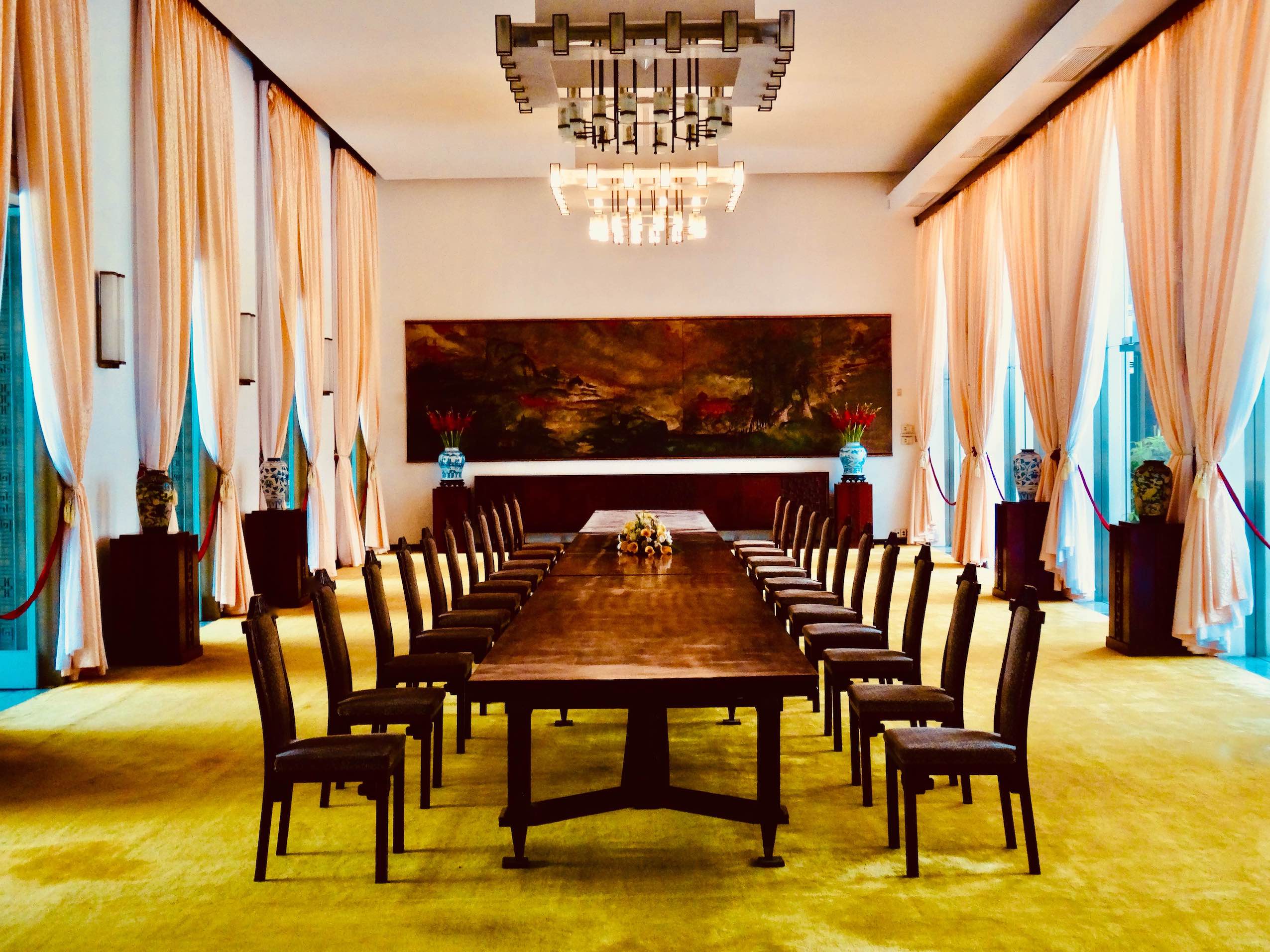 Man, the history is confusing, or at least to me. Hence I am delighted to move onto the visit itself and my fascinating albeit surreal walk through the palace’s fronzen-in-time interior. One of the first rooms I saw was the State Banqueting Hall, employed to welcome several U.S. delegations. Palace architect Ngo Viet Thu created the amazing painting, National Landscape, seen on the back wall. 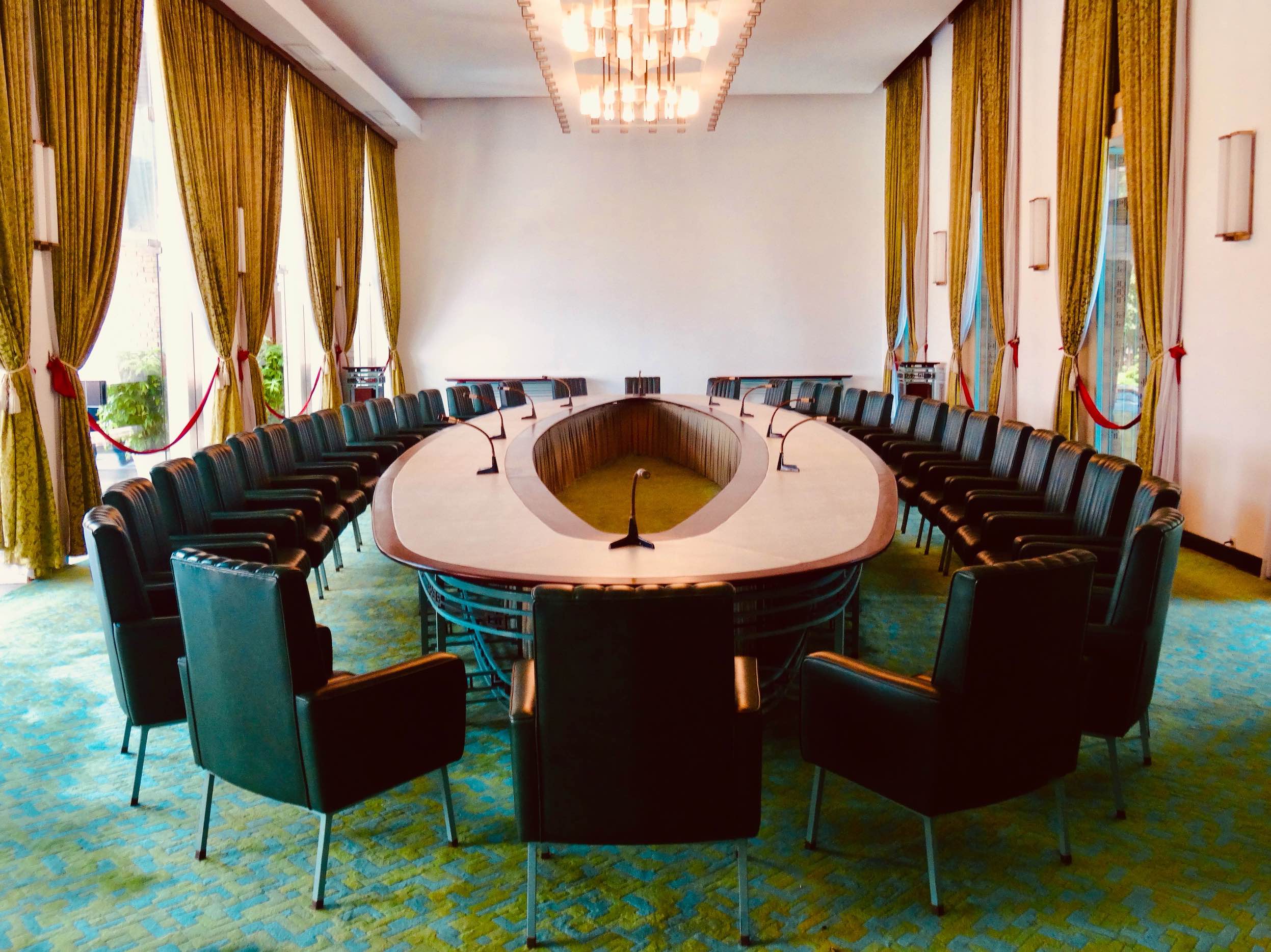 General Nguyen Van Thieu’s reign proved just as chaotic as his predecessor’s. With the Vietnam War raging, the country was in turmoil and the general often carried out personnel reshuffles here in The Cabinet Room, pictured above. 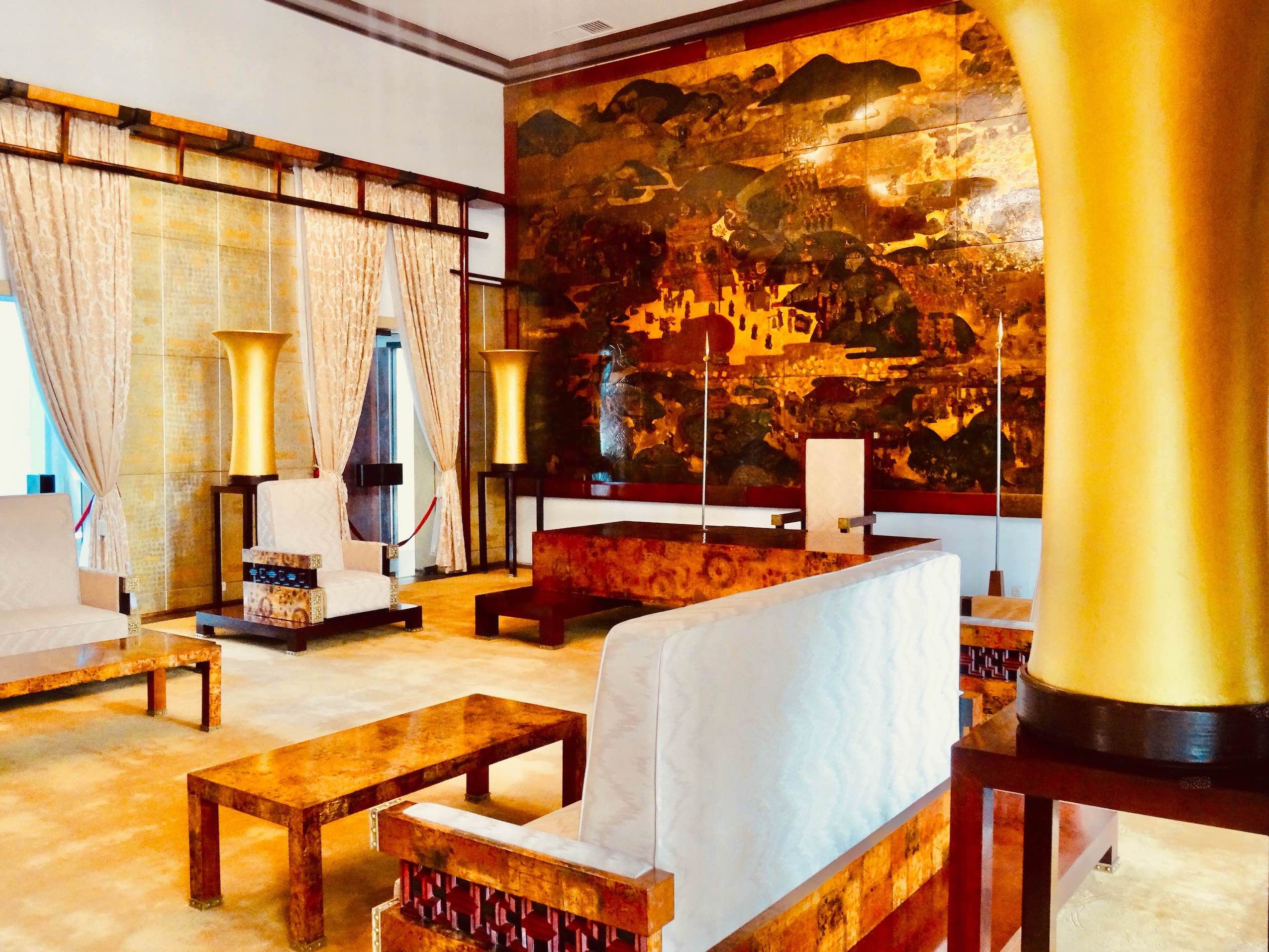 There is such a wild mix of design styles within the palace, including modernist Vietnamese, Classical Chinese and traditional Japanese. For the best of the latter, check out The Ambassador’s Chamber, with its lush wood and metal lacquerwork. 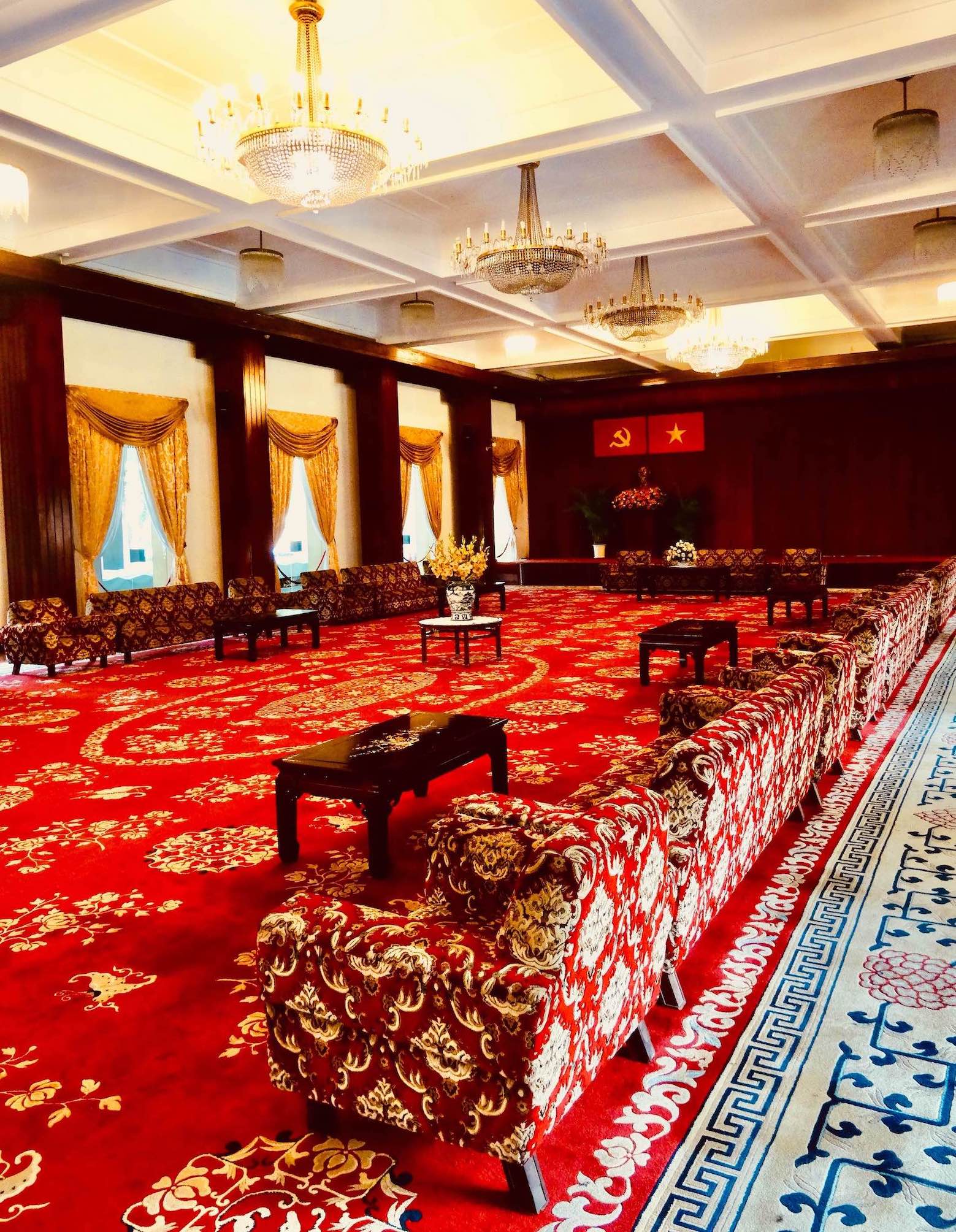 One of the biggest and most colourful rooms was the exquisite Conference Hall. It would’ve been great to have known the details of what took place here as President Thieu led Southern Vietnamese forces during The Vietnam War. However, there is very little onsite information accompanying each room. This left me ruing the fact that I hadn’t been able to get onto a guided tour. Places, I remember, were limited and fully booked across the days of my visit. 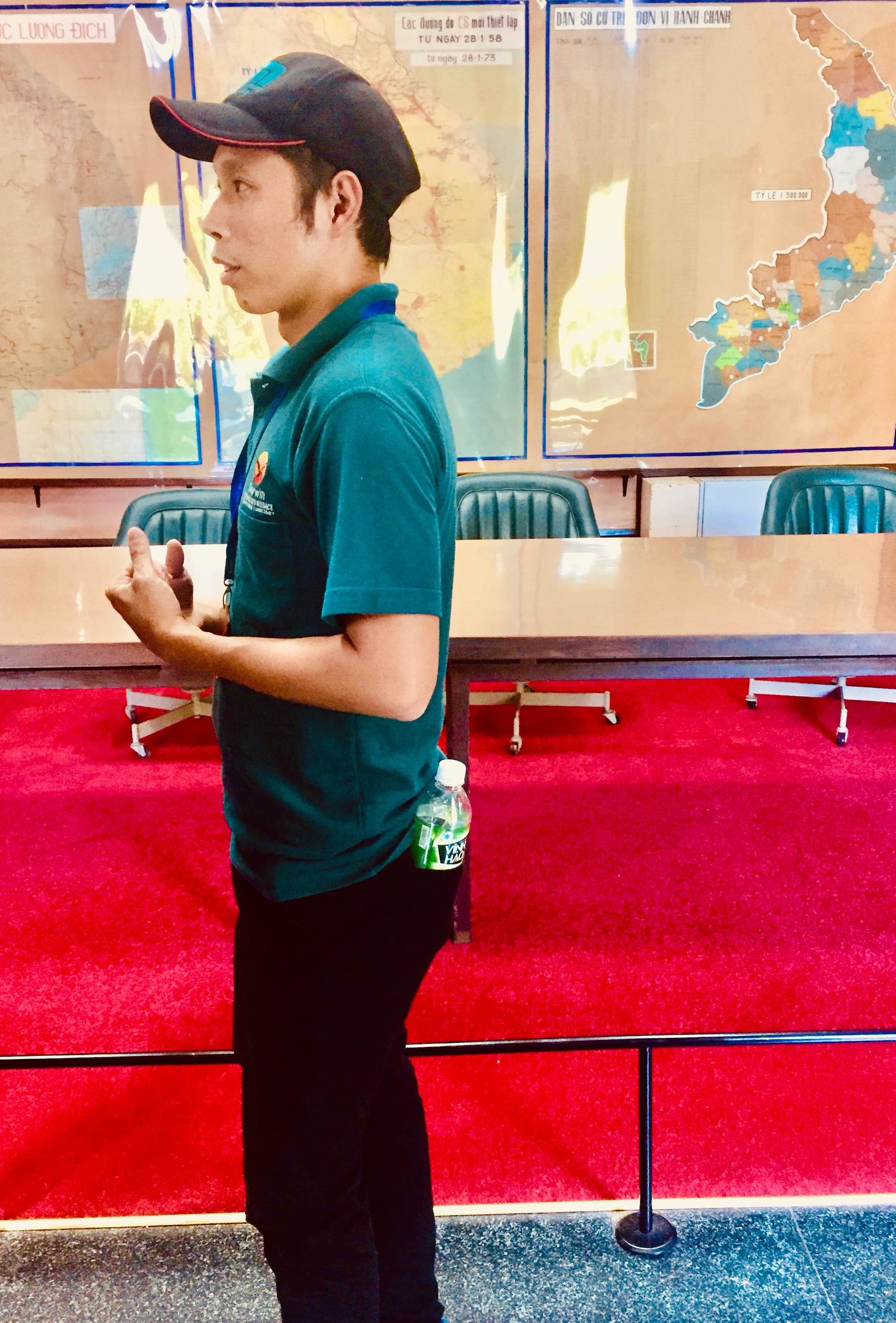 As it turned out, my wanderings saw me cross paths with a tour group in the National Security Council Chamber. This is where President Thieu met with his military leaders. Despite being largely empty (just a few tables, chairs and lots of yellowing maps), it remains a fascinating space. Especially when one considers this is where President Thieu held an emergency meeting on April the 3rd 1975. Just weeks before he announced his resignation and North Vietnamese tanks stormed the palace gates to signal The Fall of Saigon. 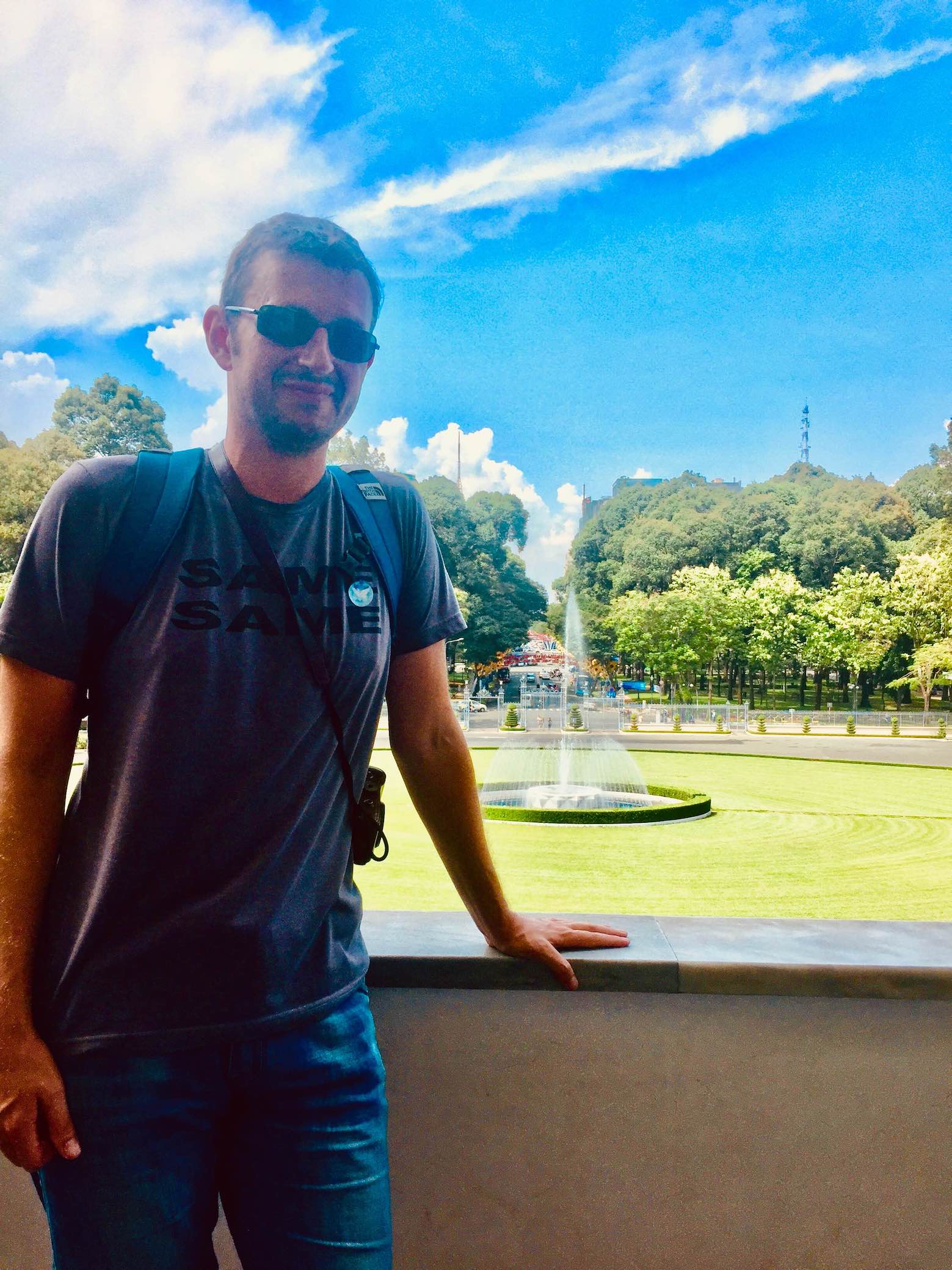 This second floor balcony gives you the chance to imagine that scene in all its intensity. How much noise the PAVN T-54/55 tanks made bulldozing through all that iron. The sight of the invading soldiers running across the lawn. And of General Duong Van Minh and his closest advisers sitting silently on the steps awaiting their fate.

The Fall of Saigon. 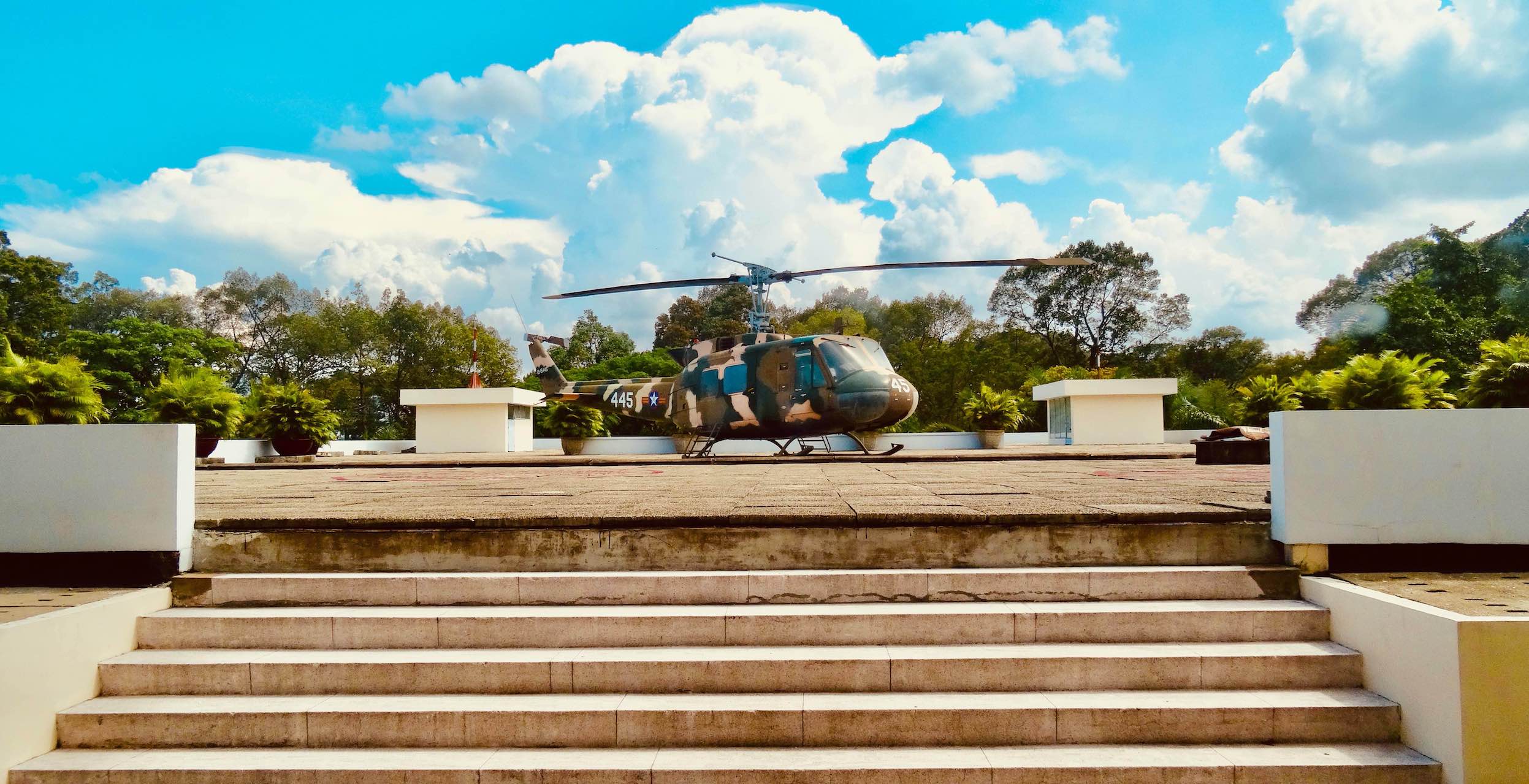 Through the windows on the second floor, I spied one of two helicopter displays on the palace roof. One stands as a reminder of the bombings that took place here. The other marks the spot where incumbents fled for their lives as part of Operation Frequent Wind, Saigon’s citywide evacuation between the 29th and 30th of April 1975.

For just a moment, in the pure silence of the corridor, I stood pondering what that must have been like. To be sprinting towards the open door of the helicopter, its deafening blades spinning overhead. Running for your life, earthly possessions abandoned, towards an unknown future.

Like this? Take a look at more of my pieces from all over Vietnam.