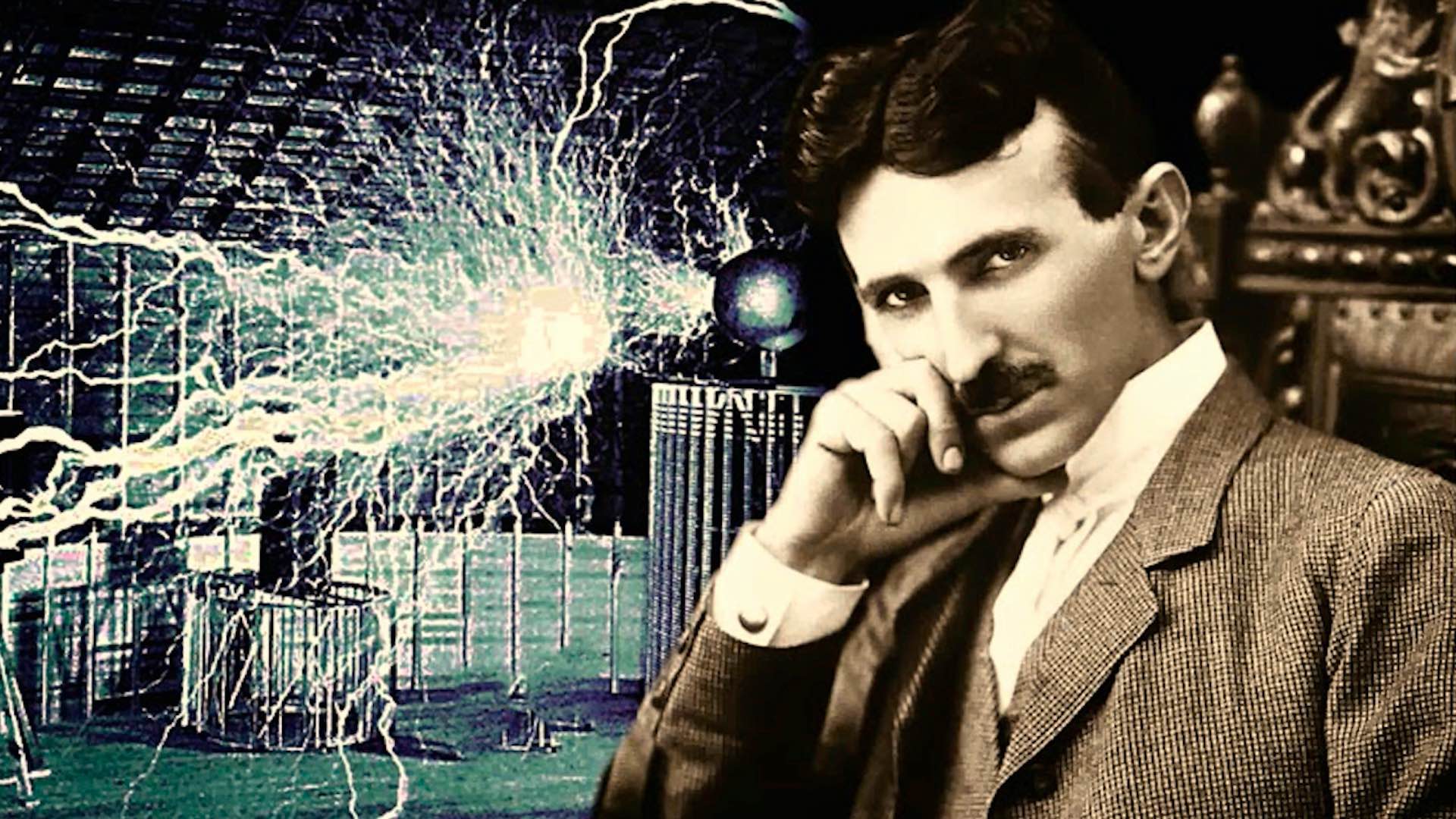 I would like to think that, for the most part, I’m a positive travel blogger. You know, someone who takes a half glass full approach to writing up my adventures across the globe. That’s not to say that I ignore the negatives or try to paint a whitewashed picture. Rather, I simply try to stay balanced and mindful when presenting the stuff I didn’t enjoy about a country.

Unfortunately, once in a blue moon, I find myself looking back on a real stinker. Today’s piece, as you’ve almost certainly figured, documents one of them. It’s such a pity that my worst encounter in Belgrade came at one of the places I had been most looking forward to visiting: The Nikola Tesla Museum. 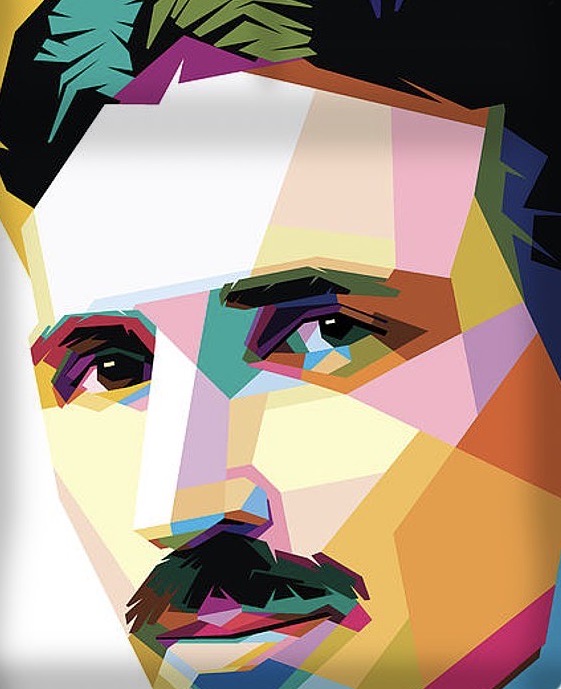 What a brilliant and fascinating man Nikola Tesla was. A fiercely intelligent and single-minded inventor who designed and patented the world’s first alternating-current (AC) electric system. A man who invented the Tesla Coil, an electrical resonant transformer circuit. The dude who dreamed up the first hydro-electric power plant in Niagara Falls and who some mischievous historians suggest laid down the early research work that led to the invention of the neon sign. 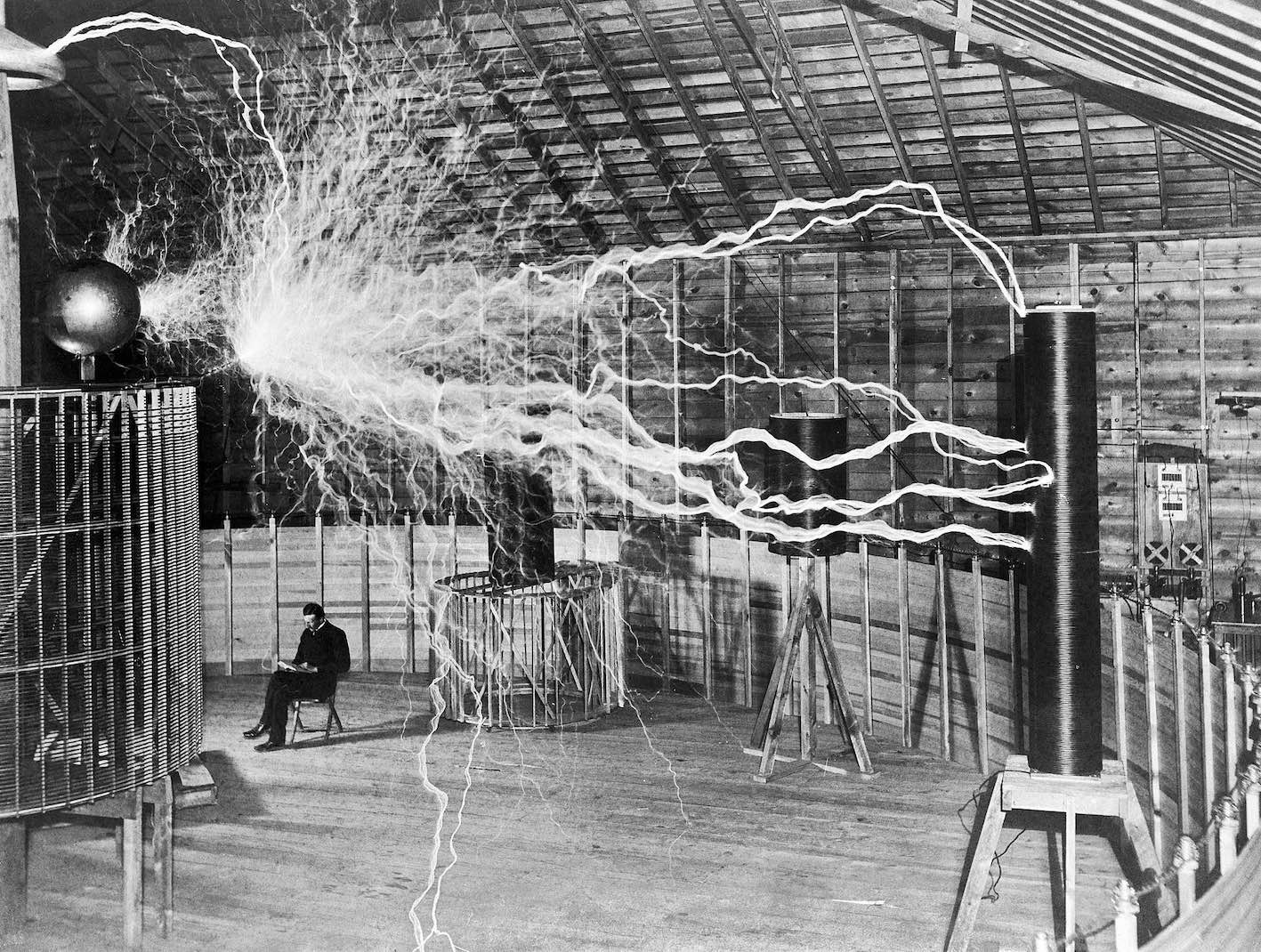 Tesla pictured in 1899 with his famous coil.

Moreover, Nikola overcame great adversity in life. As a teenager he survived cholera, an illness that kept him bedridden for over nine months. Later, as a young man working on various inventions, he lived in a state of extreme poverty before landing a job as a ditch digger for $2 a day. In the little free time he had, Tesla brushed up on the eight languages he spoke. That’s Serbian, English, Czech, German, French, Hungarian, Italian, and Latin, in case you were wondering. 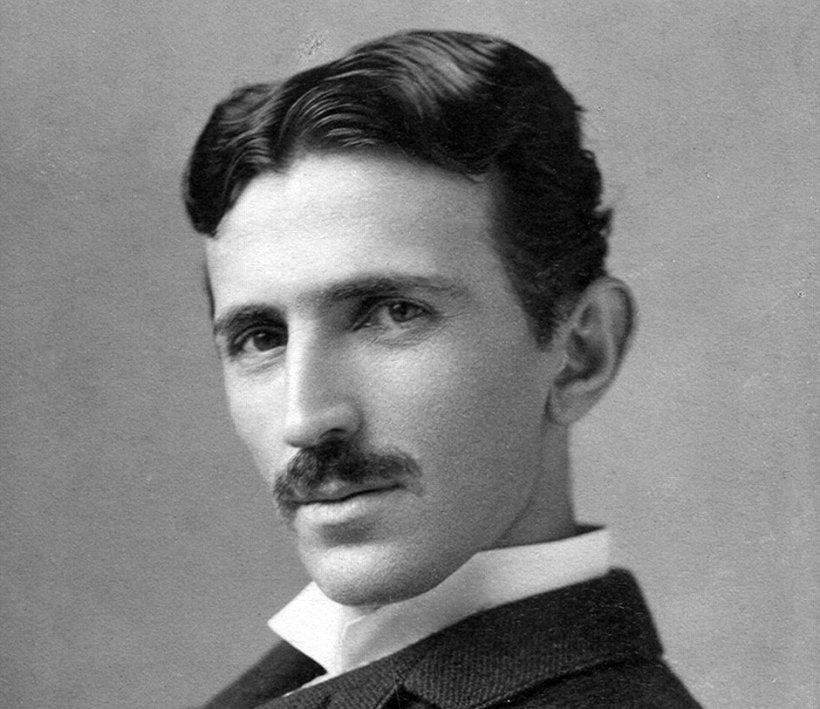 Naturally, I was super excited by the prospect of visiting a museum dedicated to the man and his work. Thus Sladja and I made plans to go and check it out. As one of Belgrade’s most popular attractions, we thought we’d try to book our tickets online. However, this was not possible. Nor could you go to the museum in advance to pick up your ticket.

In fact, the only way to get in was to show up directly before each guided tour and pay as you entered. Oh, and they don’t accept bank cards, it’s strictly cash only. Boy, we should have already known this place was going to be a whole other experience. 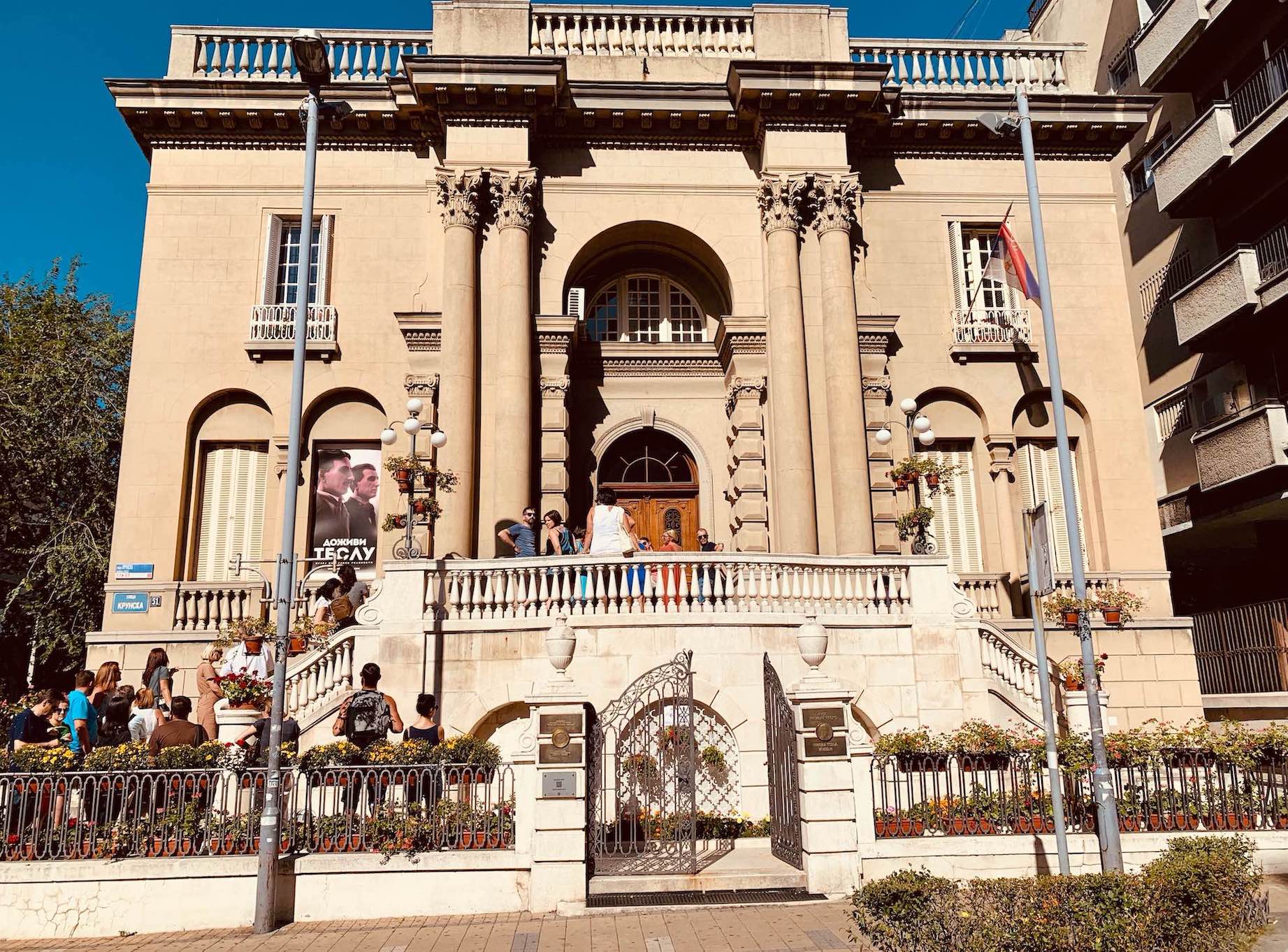 It was a boiling hot afternoon when we set off for the museum on foot. Nevertheless, we figured there could still be a crowd, so we got there ahead of time. But the situation we found on arrival was utterly bizarre.

First, we found the entrance doors locked and a line of sweaty, irritated people running along the balcony and down the staircase to the compound gate. And that wasn’t all. It was so damn hot and without an inch of shade outside the museum, most folk were waiting on the other side of the road under some trees. 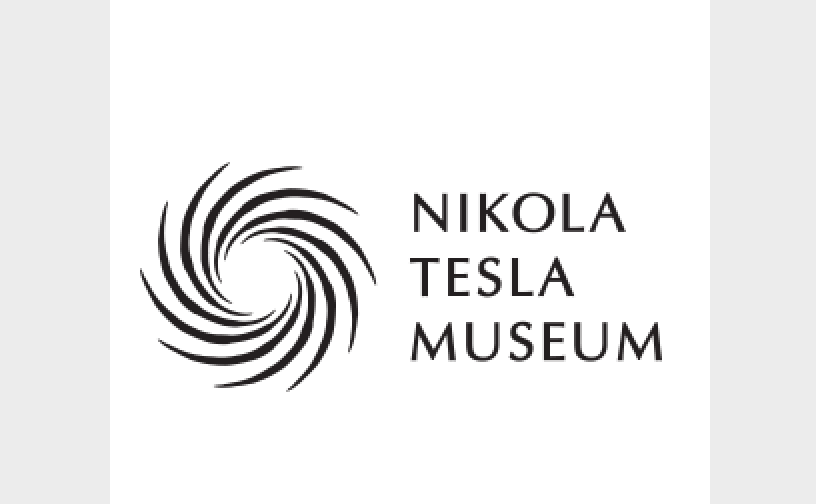 Unsure as to where we should wait, we thought what the heck and joined the queue outside the building. There was a lot of confusion in that line. Was the next tour in Serbian or was it in English? Why were the doors locked? Couldn’t we go in and at least use the toilet? A few minutes before the tour was due to start the doors swung open and a young Serbian man appeared barking orders at us.

“Get away from the doors!”

“There are no toilets here!”

He was the rudest, most aggressive person I have ever seen at a tourist attraction. Aleksander, said his name tag, which I vowed not to forget. Tall, slim, perfectly bald and with his face creased into a permanent scowl, I immediately pictured him in a certain type of World War II uniform. 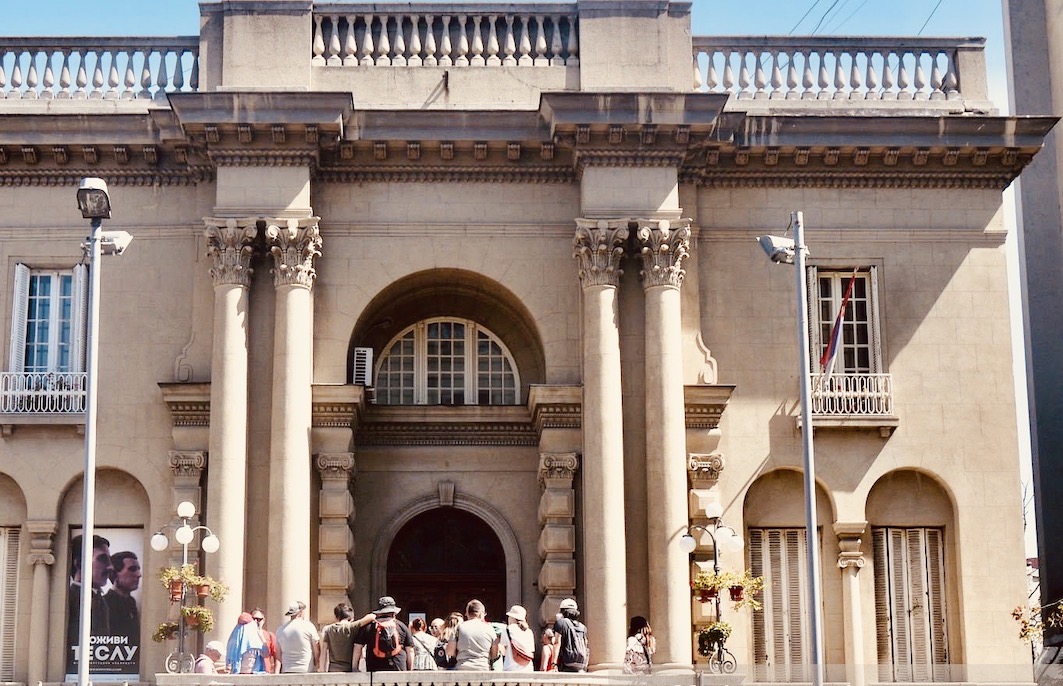 Now the others across the road were streaming over to join the main line. This seemed to piss Aleksander off even more. “Ten people at a time!” he growled. He then shouted again for visitors to move back. The way he was going on, you would have thought the museum was in danger of a stampede. But of course there was absolutely nothing of the sort unfolding.

Finally, Sergeant Aleksander began drip feeding the line inside, ten by ten. When it came to us, Sladja was number ten of the stream and of course Aleksander angrily stopped me from joining her. I told him that we were together and that we’d be paying for two. With an impatient snarl he shooed me inside like I was a piece of shit on the bottom of his boot. Then he went back outside to shout at some more people. I was absolutely furious. 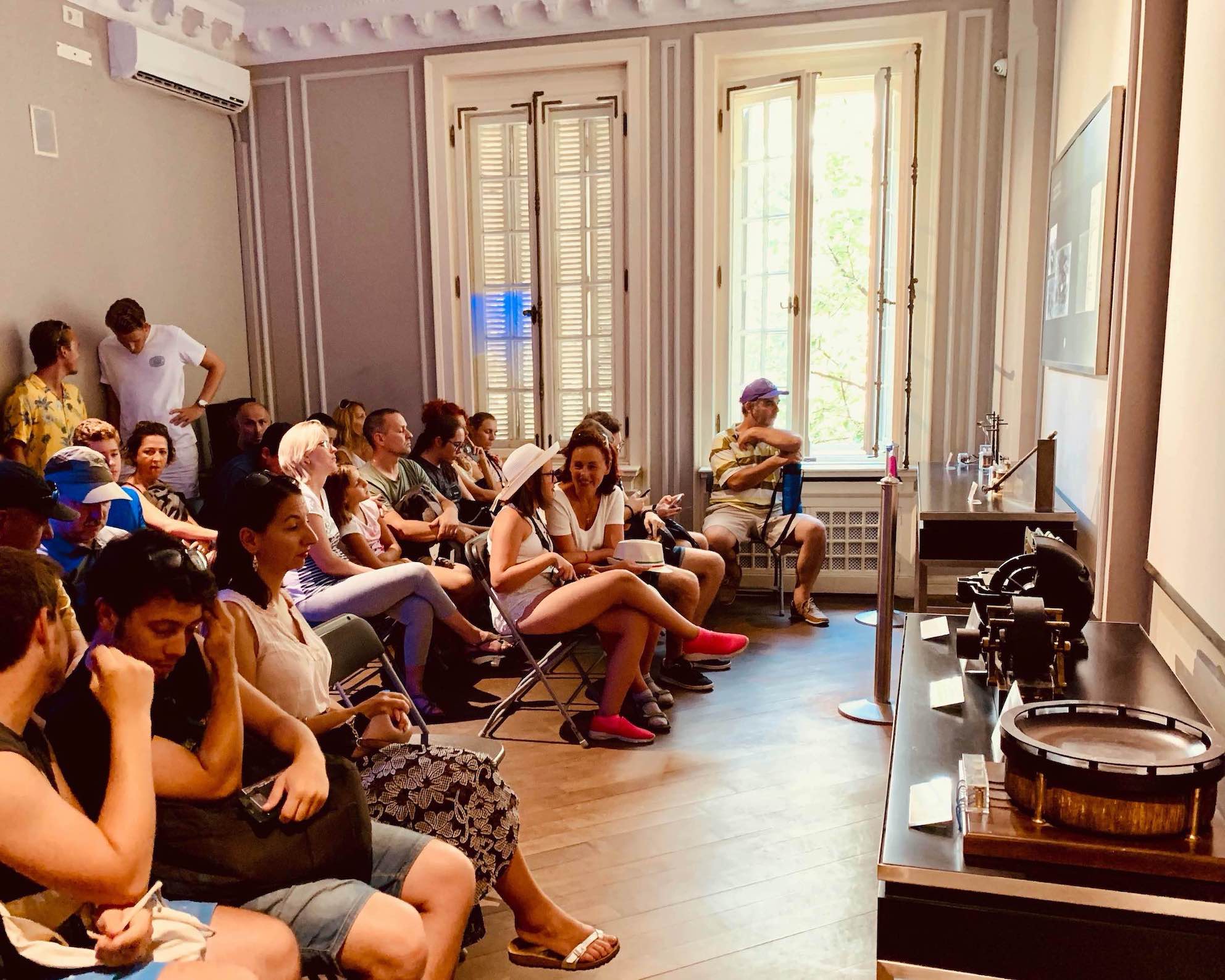 In the tiny lobby we paid the charmless woman (in cash) for our tickets. Next, we followed the crowds into a small airless room that served as a theatre. People were really fed up. There was a crying baby and a man telling his wife that he urgently needed to leave and head down the street in search of a toilet.

By the time everyone had been packed inside, the room was at bursting point. There weren’t enough chairs of course, hence many made do with standing at the back and around the sides of the room. And then the movie began, a 10 minute bog standard potted history of Tesla’s life. The kind of cheesy, badly voice-overed thing you could find on YouTube. Ok… 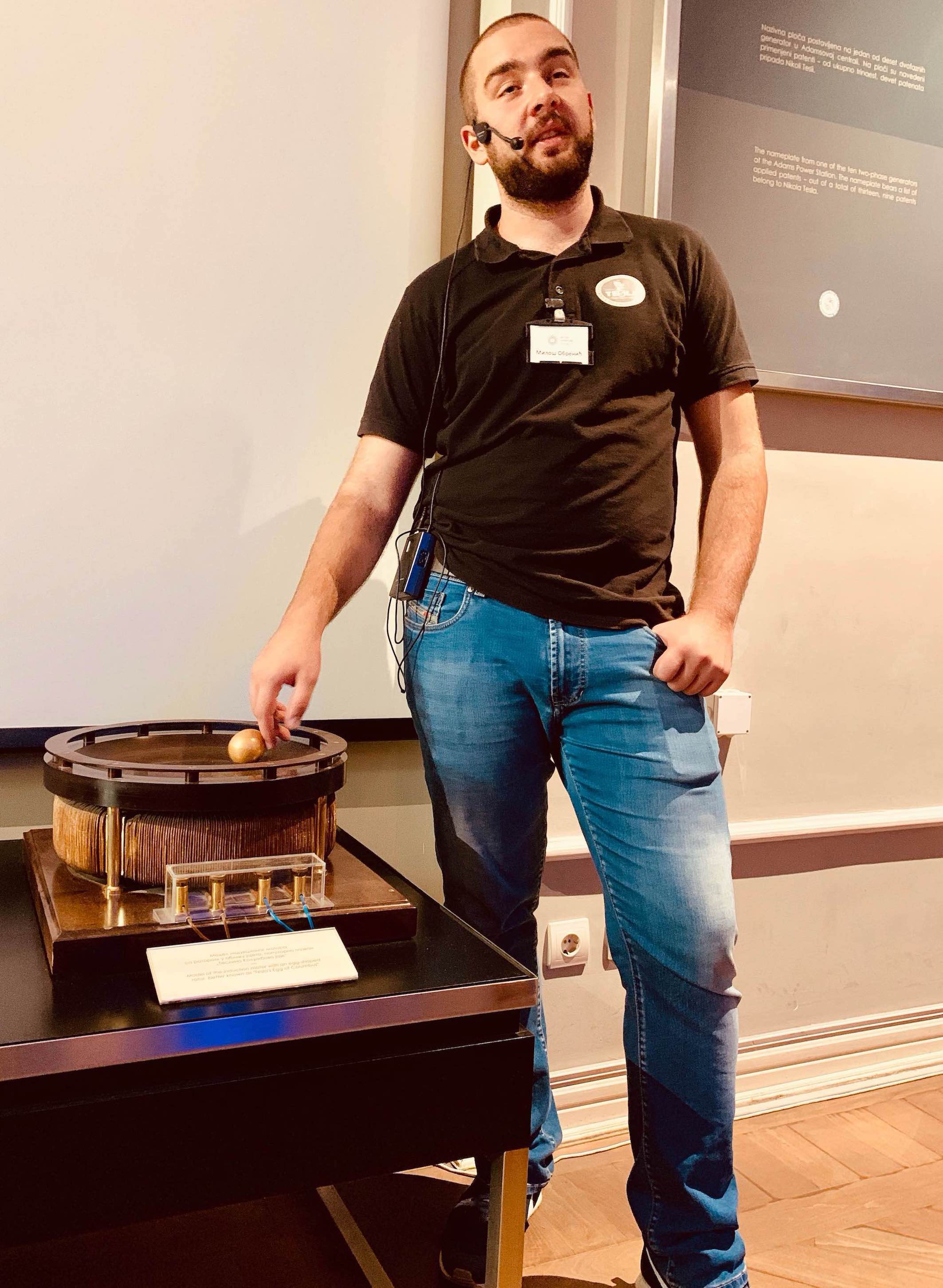 With a subdued atmosphere, our guide introduced himself and led us into another small room. There, we gathered around a collection of replica Tesla inventions. Happily, the guide was friendly, though with a thick accent that made his presentation a little confusing. At this point however I was just happy not being shouted at. 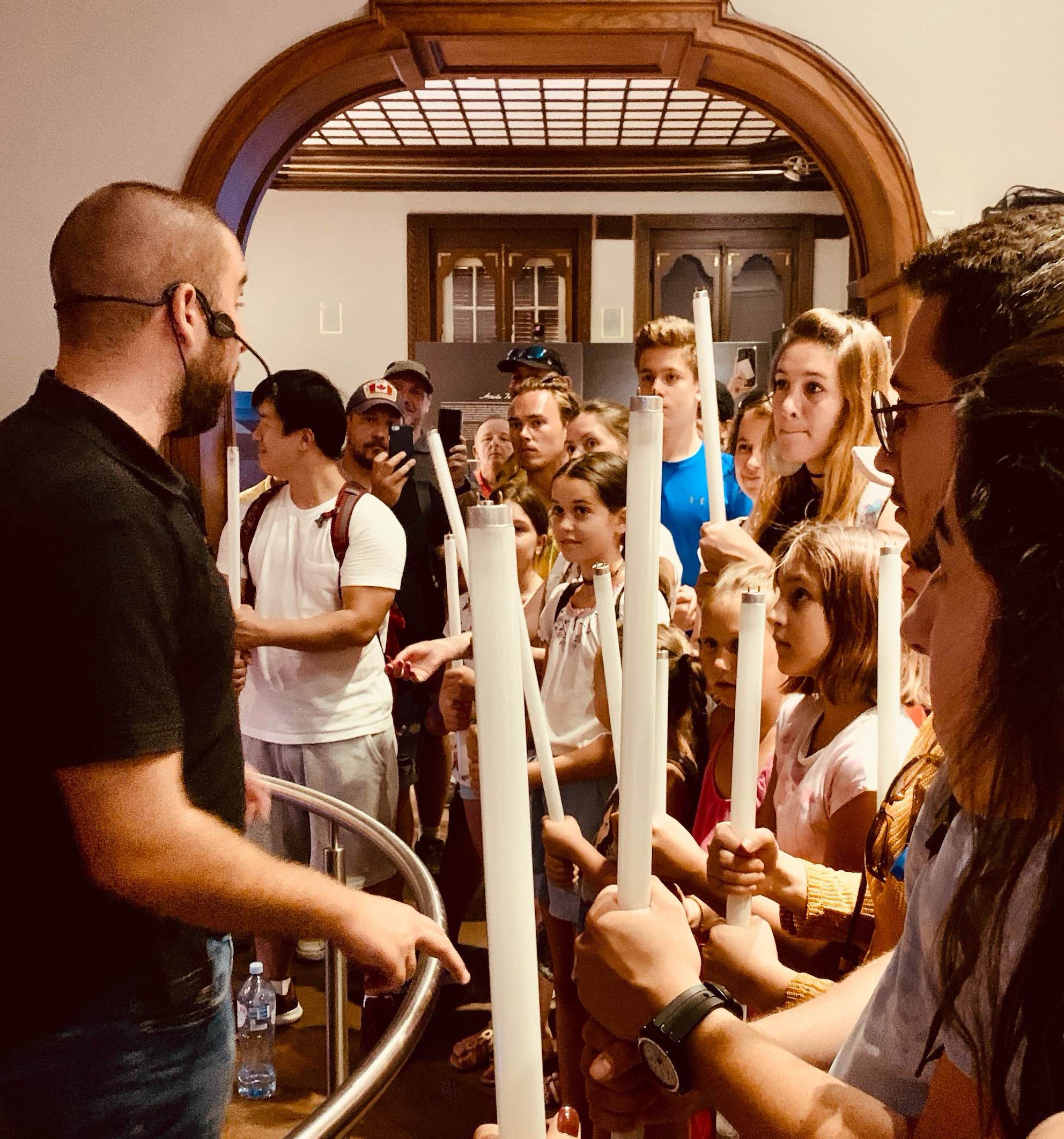 It was fun following the guide’s demos of a couple of Tesla’s inventions. Particularly the coil and its flying blue sparks that had everyone oohing and aahing in appreciation. At long last the mood had lifted.

And that was pretty much it for the so-called “guided tour”. As for the exhibit itself, I was expecting some kind of detailed overview on the various stages of his life. You know, Tesla, the Younger Years. Perhaps a section covering his unhappy time working for Thomas Edison. Something about his poverty and a display about his emergence as one of the world’s most gifted engineers. But there was nothing of the sort. Rather, we worked our way through a somewhat random collection of personal items and oddities. 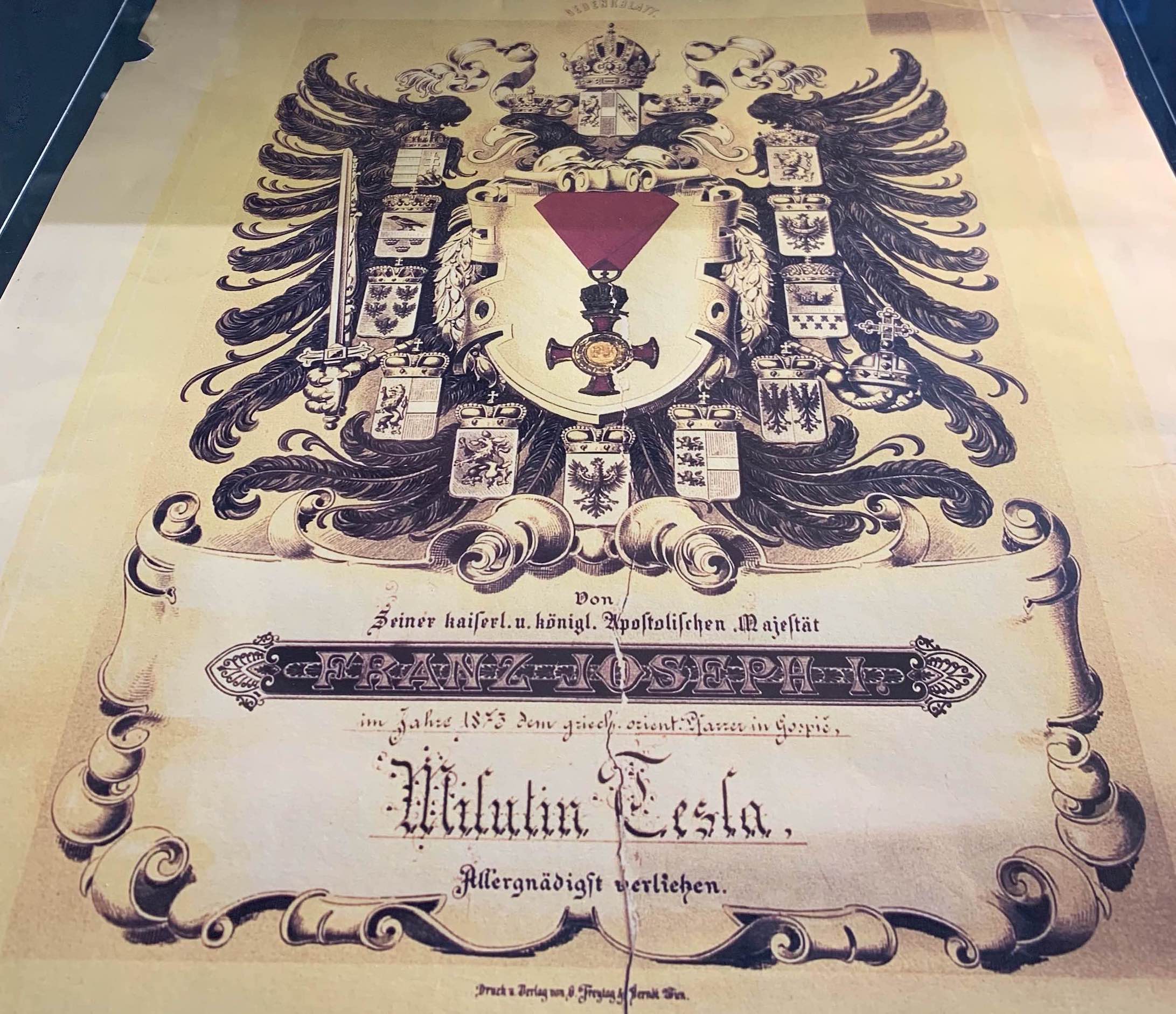 Some of the pieces were fascinating. Take, for example, this original Austrian Military Cross of Merit, given to Nikola’s father, Milutin Tesla. There was no accompanying information about the piece, I had to do my own digging.

What a shame they didn’t tell us more about the man. That he was a soldier who became a priest of the Eastern Orthodox Church. That he was a brilliant mathematician who spoke 18 languages (so they say). And how it was his dedicated service to the army and church that saw him receive one of Austro-Hungary’s finest honours. 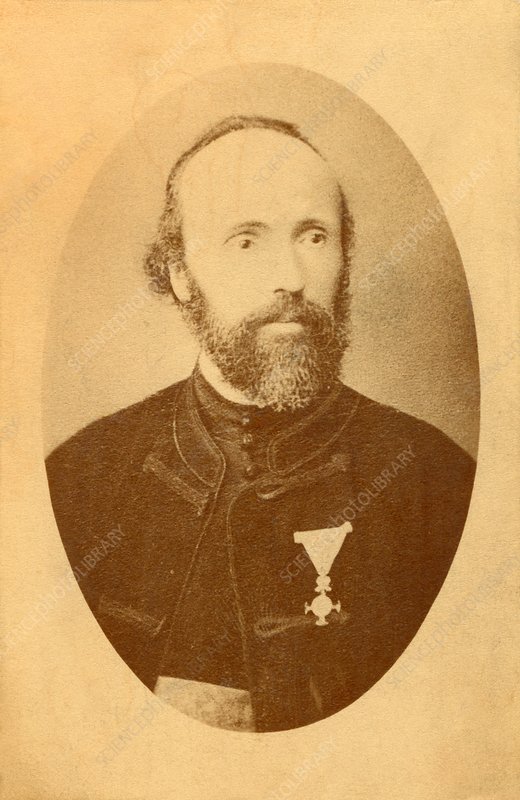 Elsewhere, I came across one of Nikola’s old suits, along with a hat and a walking cane. The sign on this one read: “Original items of clothing worn by Nikola Tesla”. And that’s it. Weirdly, they do provide more information on the website. Not that there was anything to tell me to go there, I just found it later on by chance.

There, I learned that Tesla had most of his suits tailored at the famed NYC workshop James W. Bell & Sons. And that while he treasured his hats and had them embroidered with his initials, Tesla nearly always insisted on removing them for photographs.

I also came across this Niagara Falls Power Company memorial plaque. The plant Tesla designed was considered his decisive victory against old foe Thomas Edison, who had come up with a competing Direct Current electrical system. There were other players too in what became known as the War of the Currents. 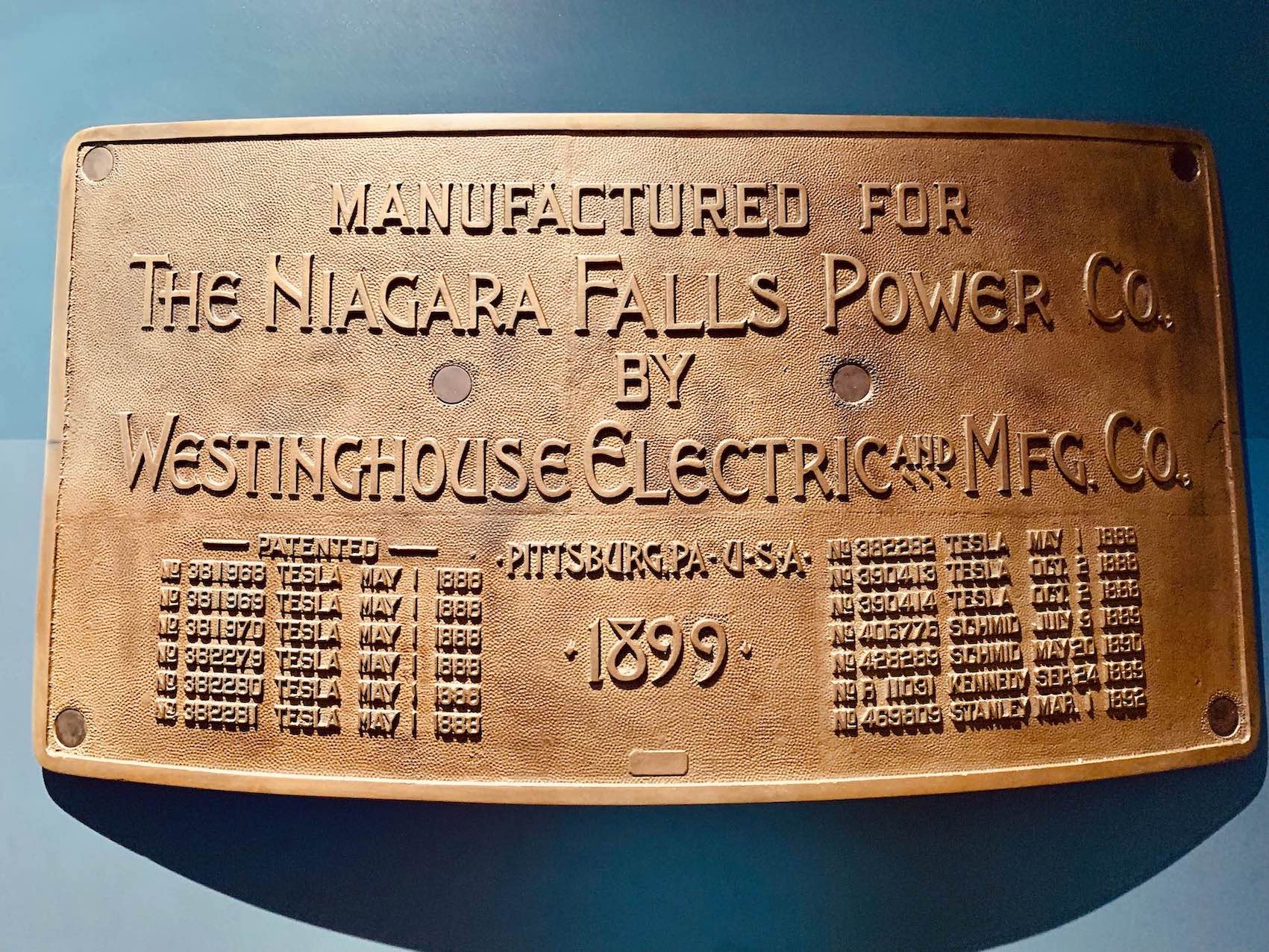 One of my favourite pieces was this letter from Tesla sent to the American Art Nouveau artist and designer Louis Comfort Tiffany. Typed up on April the 11th 1914, Tesla shows his disappointment at the lack of progress regarding a project between the two men. What exactly they were doing together remains a mystery and yeah, the museum doesn’t attempt to shed any light on it. 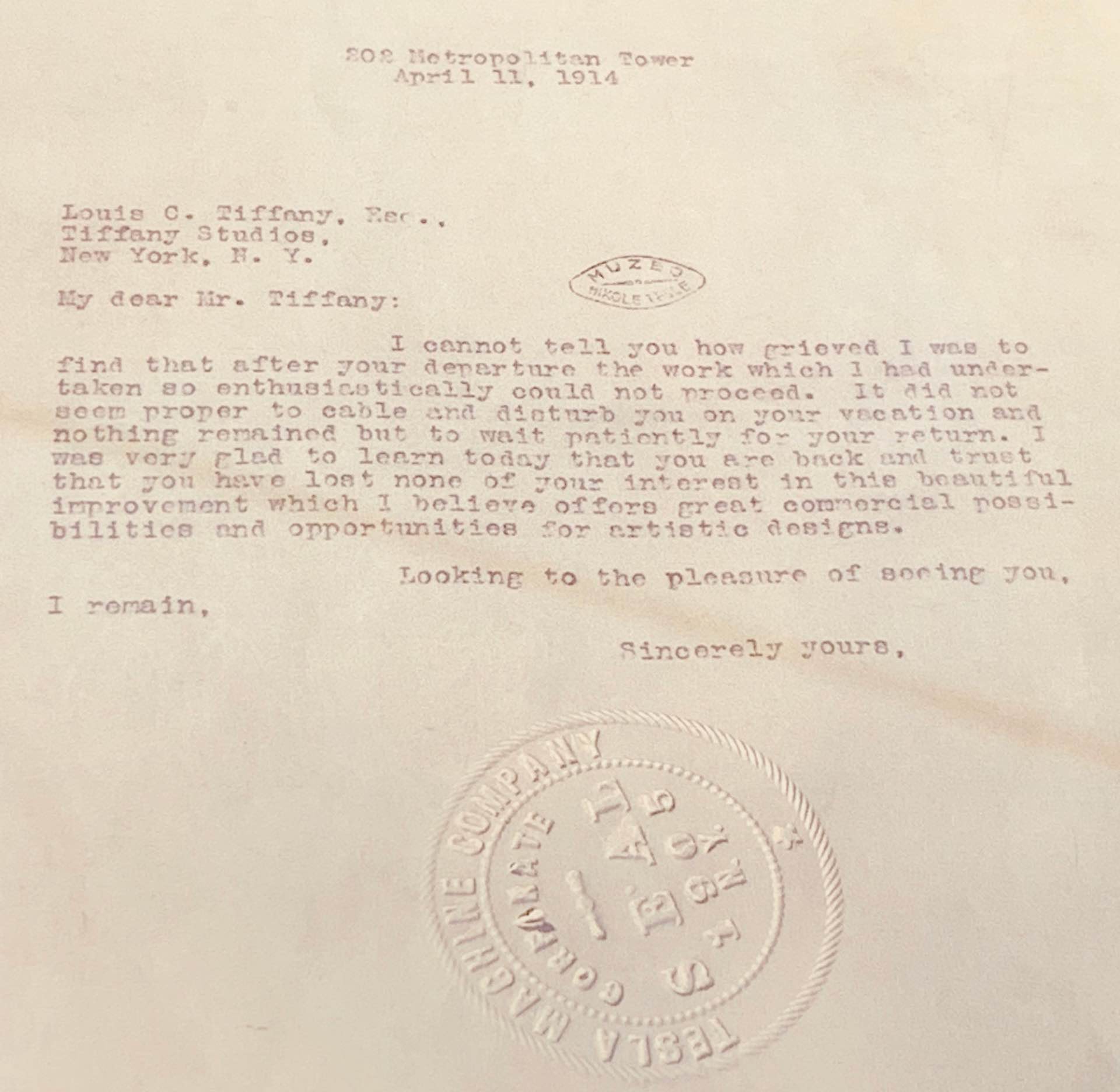 Next, I stopped to admire this copy of a painting by the brilliantly named Princess Elisabeth Vilma Lwoff-Parlaghy. The Hungarian portrait specialist captured Tesla in New York City in 1916, the only time he sat for such a painting. Created under a low blue lighting, her work soon got the nickname The Blue Portrait. 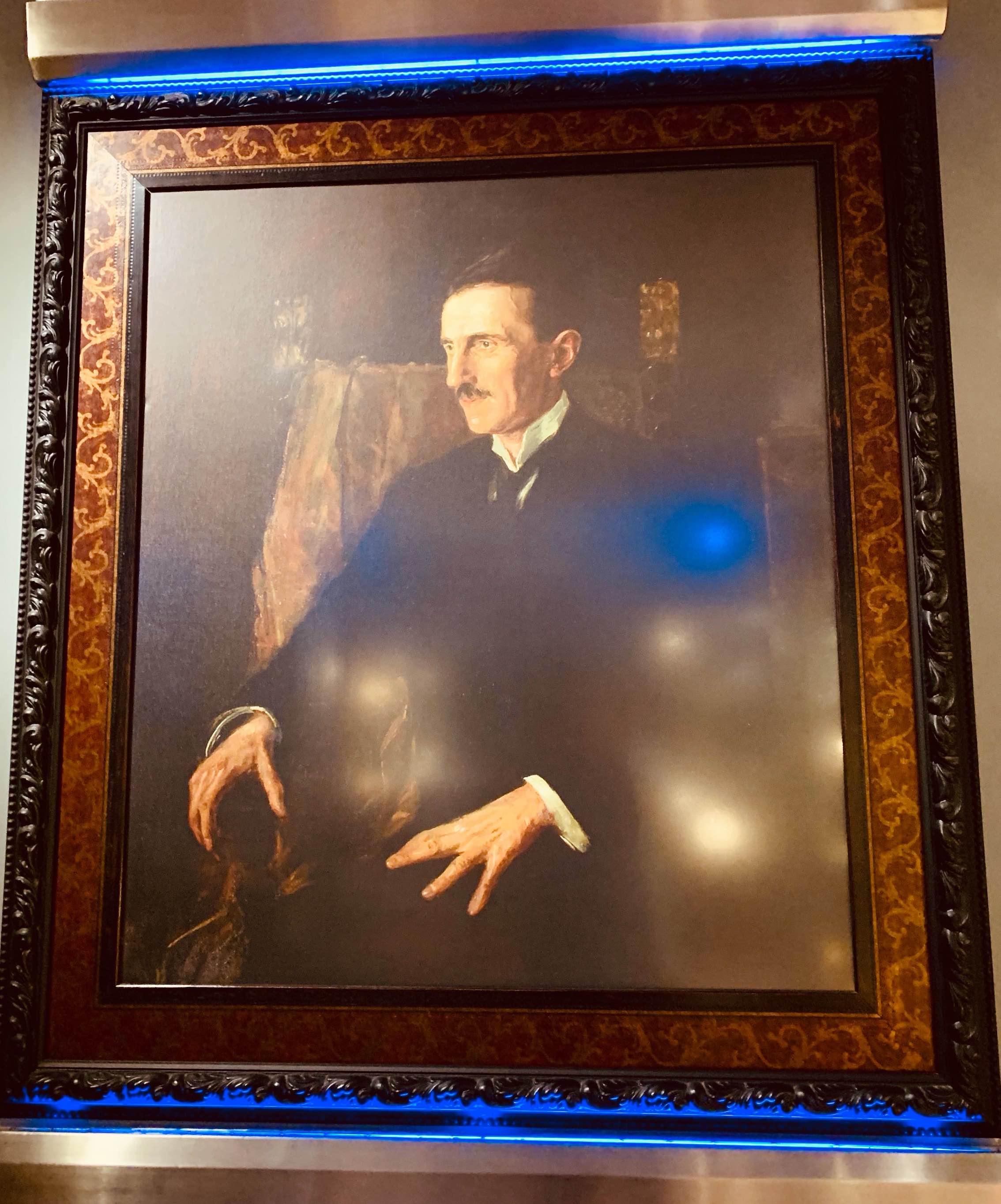 The last item on display is the most impressive by far, especially as I’d had no idea that the museum houses Nikola Tesla’s ashes. They sit in a spherical golden urn given to the museum in 1952 by Nikola’s nephew and heir, Sava Kosanović.

The location of Nikola Tesla’s remains has long been a controversial subject in Serbia. So much so that in 2017 there was the threat of legal action from The Serbian Orthodox Church. According to them, it is a disgrace that his ashes are in a museum and not laid to rest among numerous other national heroes in St Sava Church. A touchy subject, but it seems the museum has managed to keep hold of its priceless treasure. 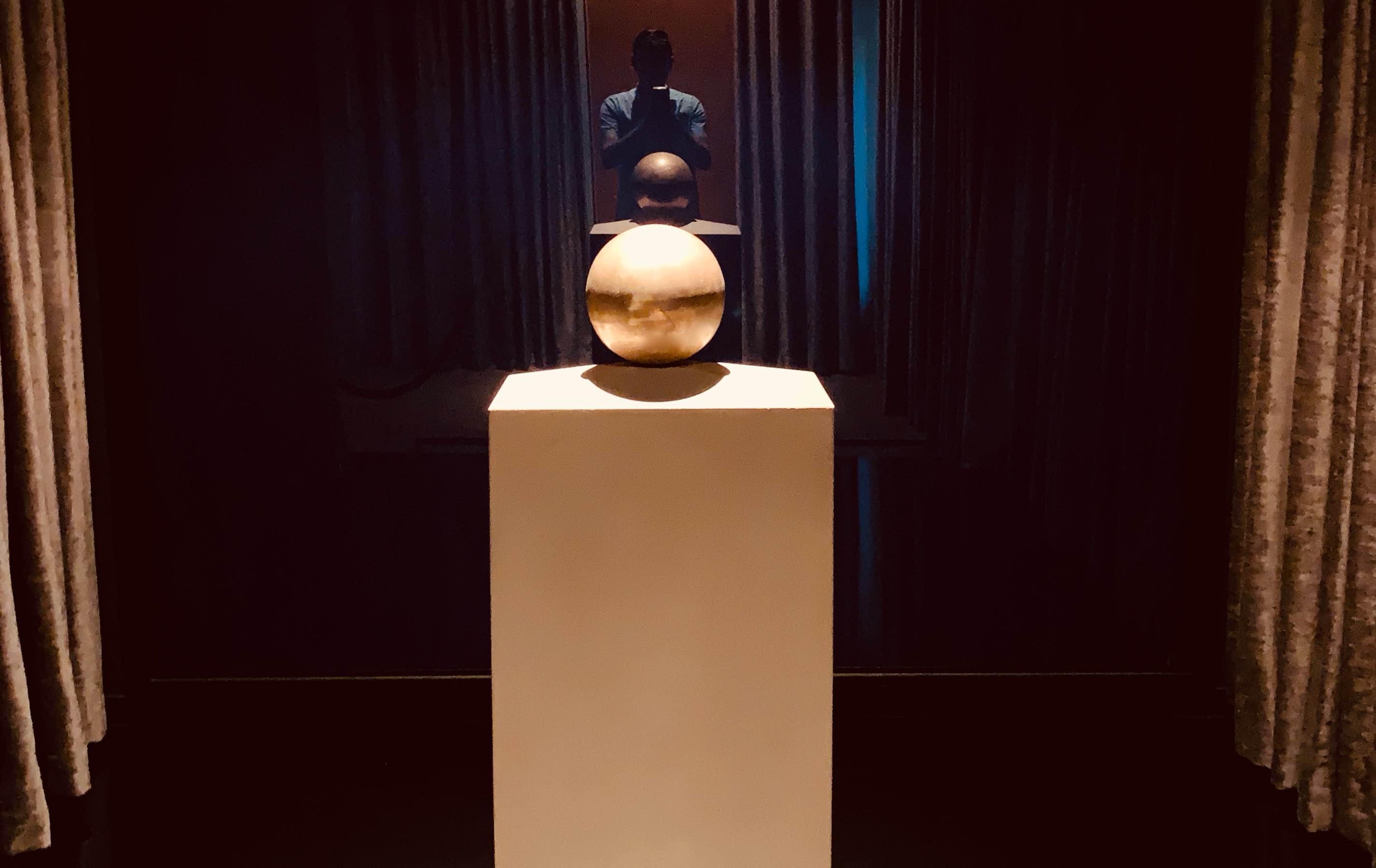 Paying my respects to Nikola Tesla.

Sladja and I were on our way out back into the sunshine when I spotted Aleksander, the tour guide and a managerial looking woman chatting quietly in the corridor. Unable to stop myself, I approached and told them exactly what I thought of the way they’d treated their guests that day.

However, the lady had zero interest in hearing or indeed even acknowledging my complaints. “Aleksander is a good boy” she told me, shaking her head. As for their so-called ticketing system, she simply shrugged her shoulders, saying: “With this location, we cannot do better”. 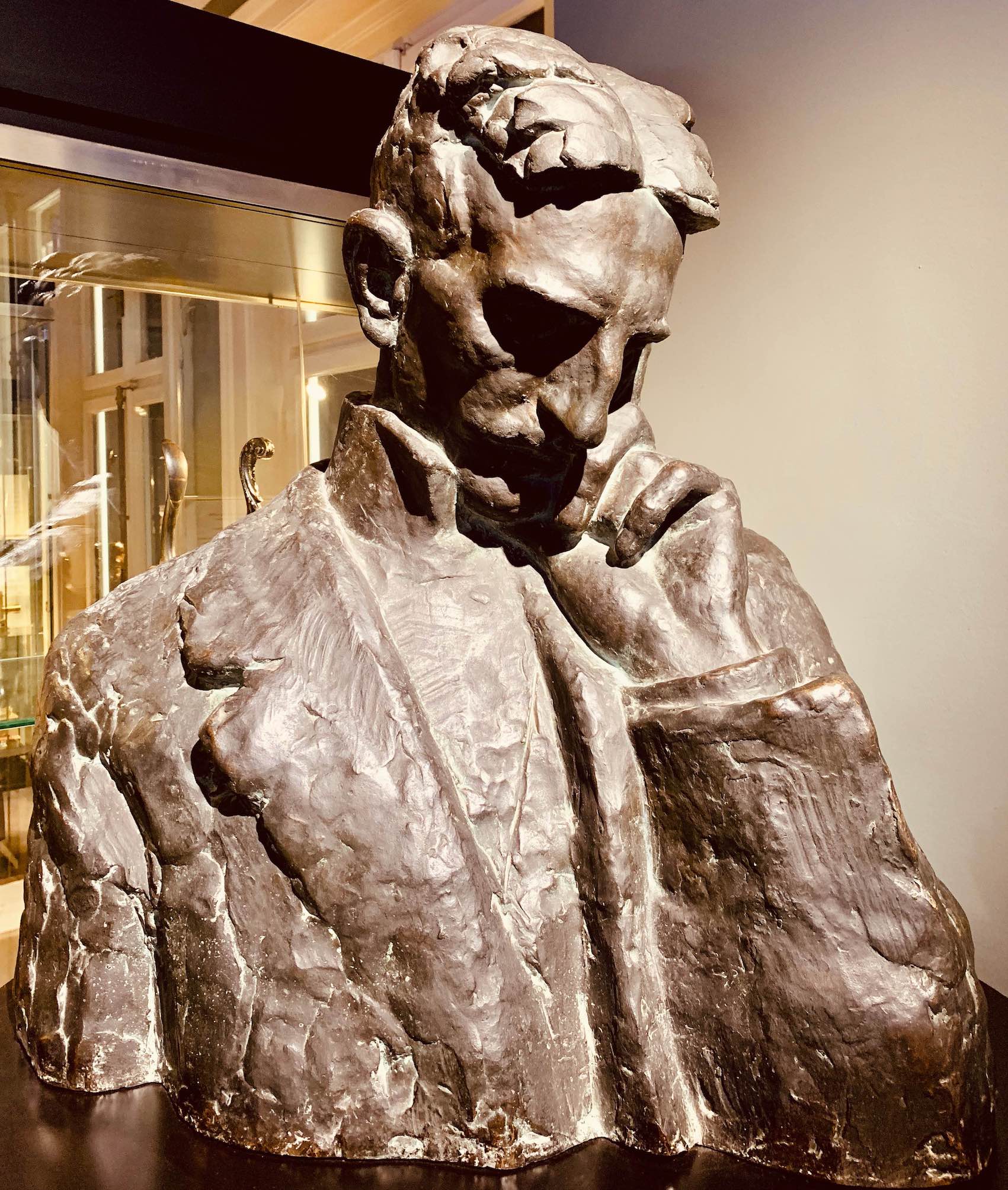 I don’t often do TripAdvisor reviews. But on this occasion I felt moved to really go to town. Unsurprisingly, I wasn’t alone in my opinion as I waded through lots of angry people who’d been subjected to a similarly crappy visit. This was easily the worst customer service experience I had in Serbia, quite possibly throughout my entire 22 years as a world traveller. As for the museum itself? Meh. Poor old Tesla, he deserves so much more.