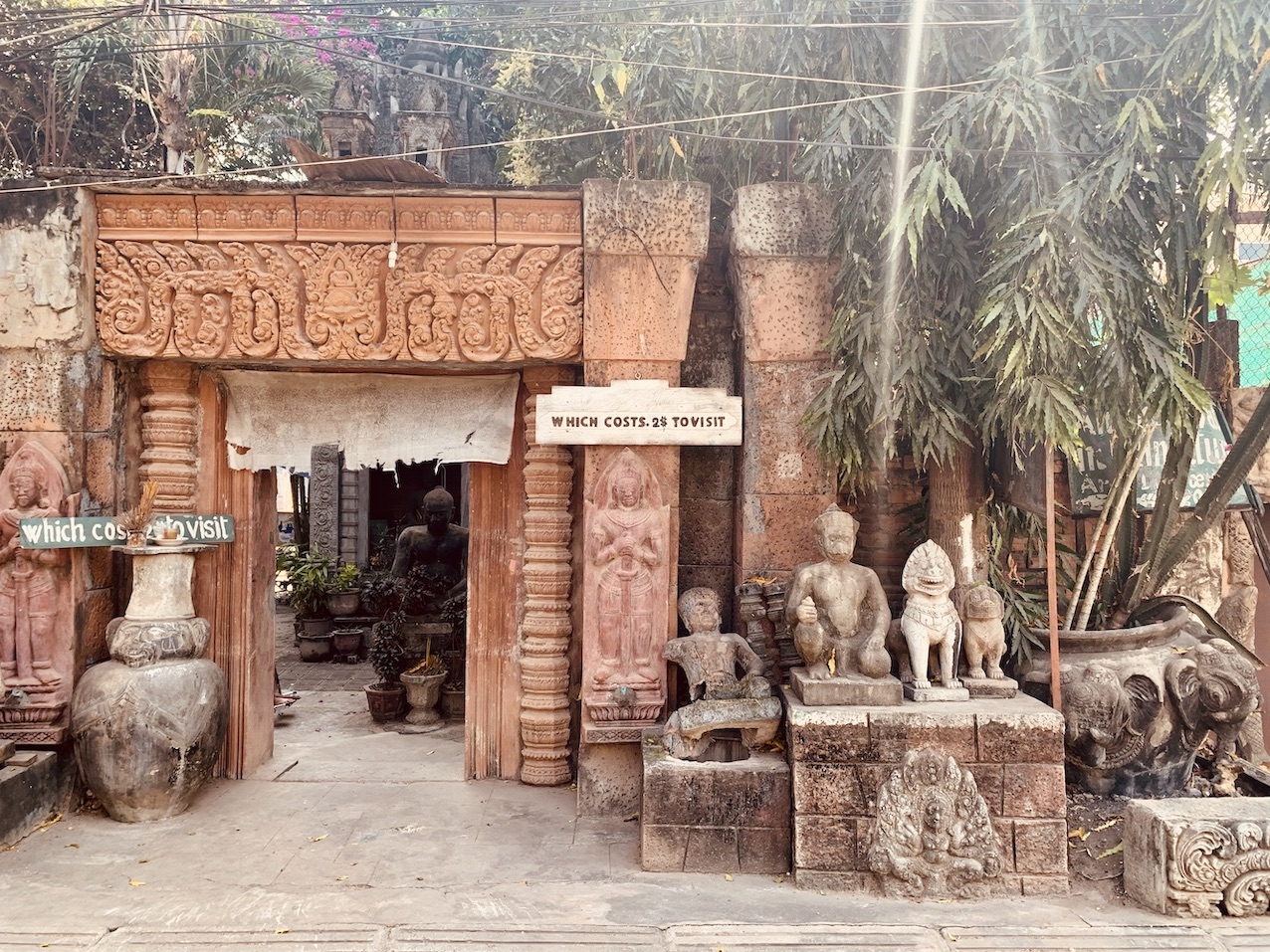 Following our life-changing adventures in Belgrade, Sladja and I drew up plans for a future together. With her living in China and myself based in The UK, it was all a bit complicated. Nevertheless, we managed to book up what we thought was going to be a 1-month stay in Siem Reap, Cambodia. After which… you know… we’d take it from there. But then a mischievous spirit called COVID arrived, signalling the chaos that was the early months of the global pandemic

To cut a very long story short, we ended up “stuck” (very comfortably) in Siem Reap for seven months. This series, first published in real time, documents our lengthy adventures. With most of my readers having subscribed well after these original posts, I thought it was high time to republish. Thanks to everyone, as ever, for your amazing support of Leighton Travels.

I really have met some fascinating people here in Cambodia these past seven months. Moreover, the experience of telling their stories on these pages will stay with me for the rest of my life. In January Sladja and I met a man with a story quite unlike any other. His name is Mr. Dy Proeung and he lives on a quiet Siem Reap side street, a short walk from The Royal Independence Gardens. 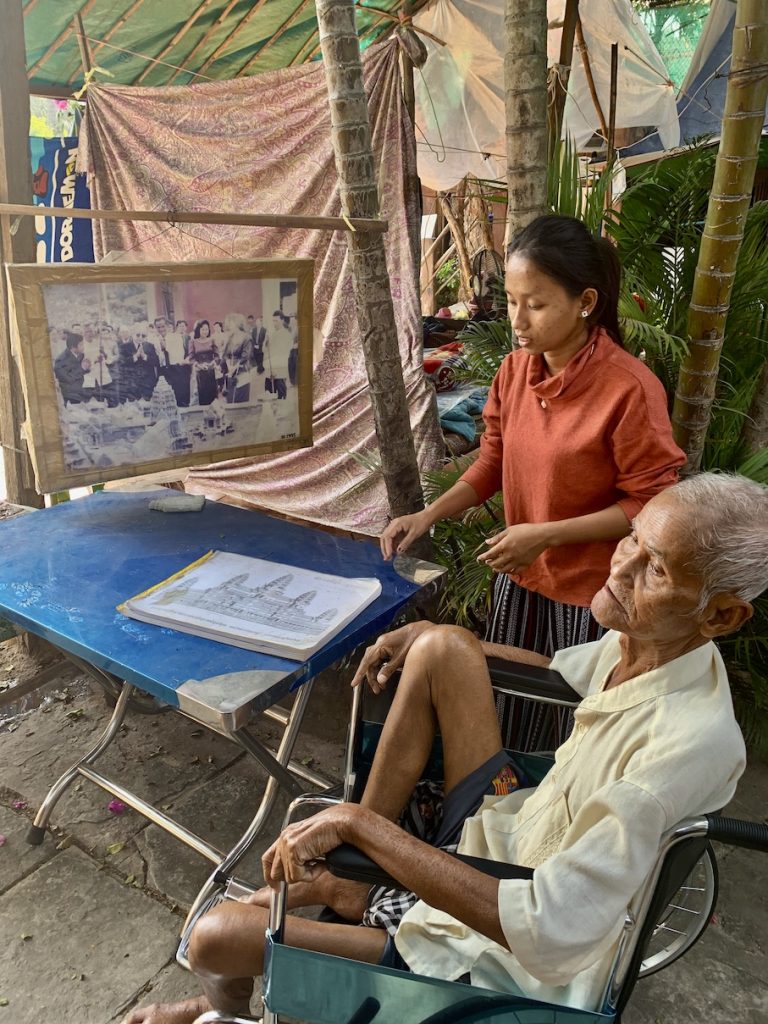 We’d read about Dy Proeung’s amazing life achievements prior to visiting his celebrated Miniature Replicas of Angkor Garden. Hence we set off one morning with the express intention of seeing his intricate works of art. However, we hadn’t anticipated him actually being there when we arrived!

Patiently stationed in a wheelchair next to a tottering desk, his granddaughter by his side, it seemed like he’d been waiting for us. “Welcome our home!” she exclaimed, “this is Dy Proeung”. At 84 years old there was no doubting he’d had a hard life. His arms and legs were worryingly bony. His sunbaked face meanwhile seemed positively stern at first glance. But then lit up as he smiled, offering us his hand. 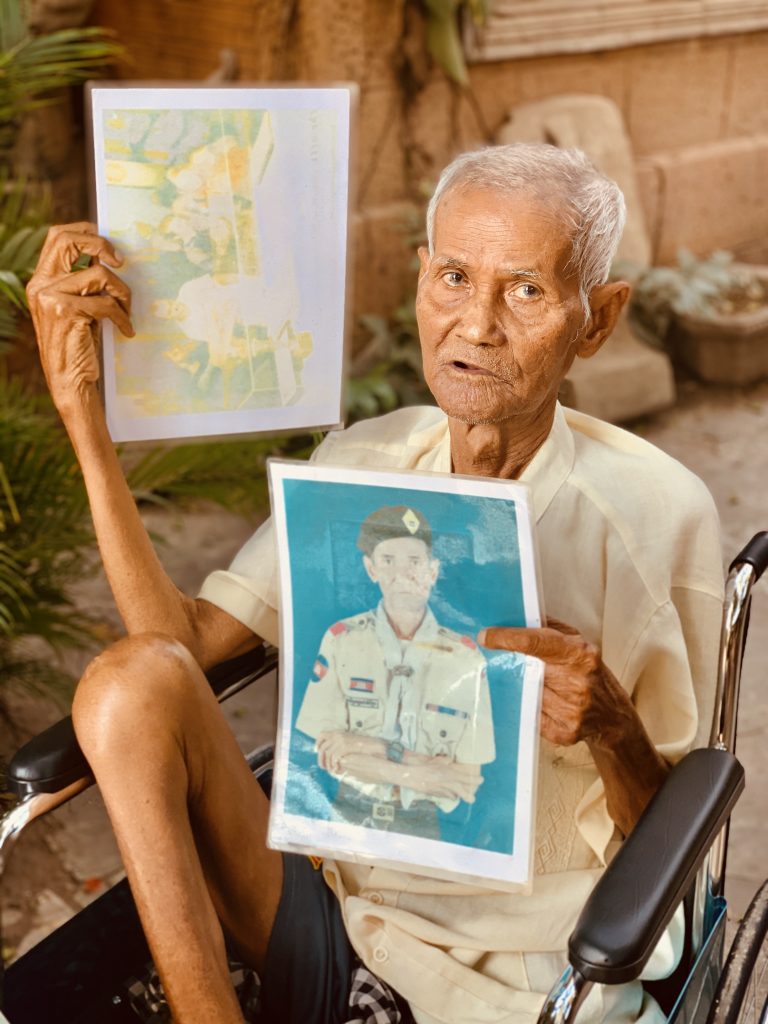 With introductions out of the way, Mr. Dy Proeung launched straight into an informal presentation of his incredible life. Unfortunately, his limited English and slurry speech rendered him mostly incomprehensible. He did have a few visual aids and his granddaughter tried to chip in here and there with translations and explanations. But overall, we were glad we’d done our research before we came. 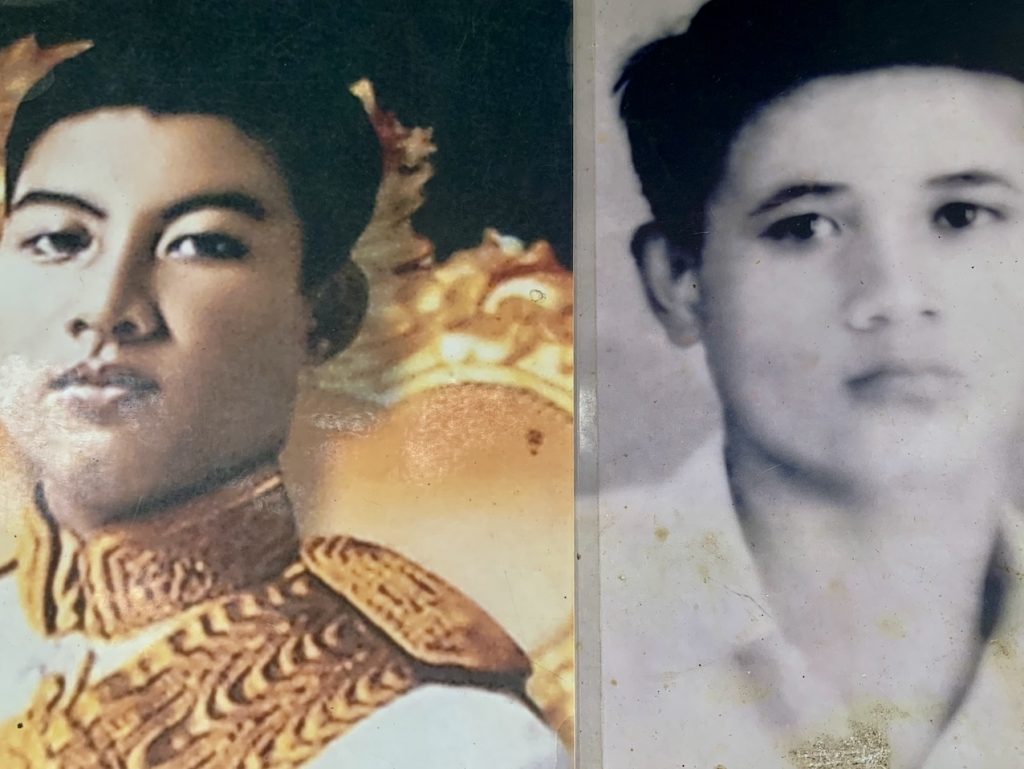 Photos of a young Dy Proeung.

Growing up in Phnom Penh, Dy Proeung dreamed of becoming an architect. After years of self study, he eventually enrolled at the Royal University of Fine Arts. Having graduated top of his class in 1960, he subsequently landed a job as a draftsmen doing survey work for Conservation d’Angkor in Siem Reap. There, he became heavily involved in the restoration of Angkor Wat, where he drew detailed architectural floor plans and elevations. 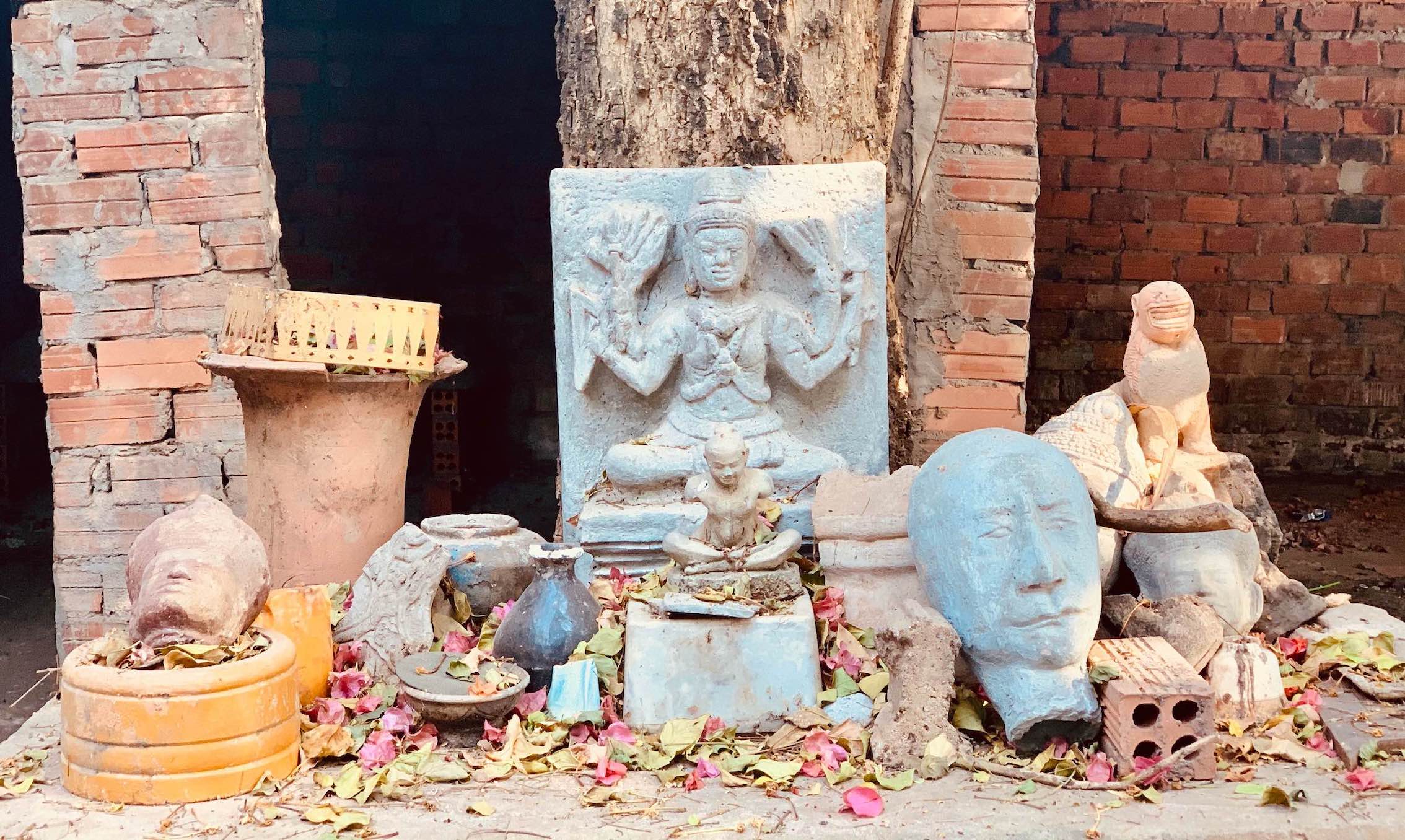 Hanging out in the garden of Dy Proeung.

By the mid 1970s he’d become one of Cambodia’s most renowned historical artists. Which of course made him a target when the murderous Khmer Rouge swept across the country. With the regime intent on creating a classless society of obedient peasant farmers, Proeung could only look on helplessly as his artist friends and colleagues were forced into labour camps and murdered. 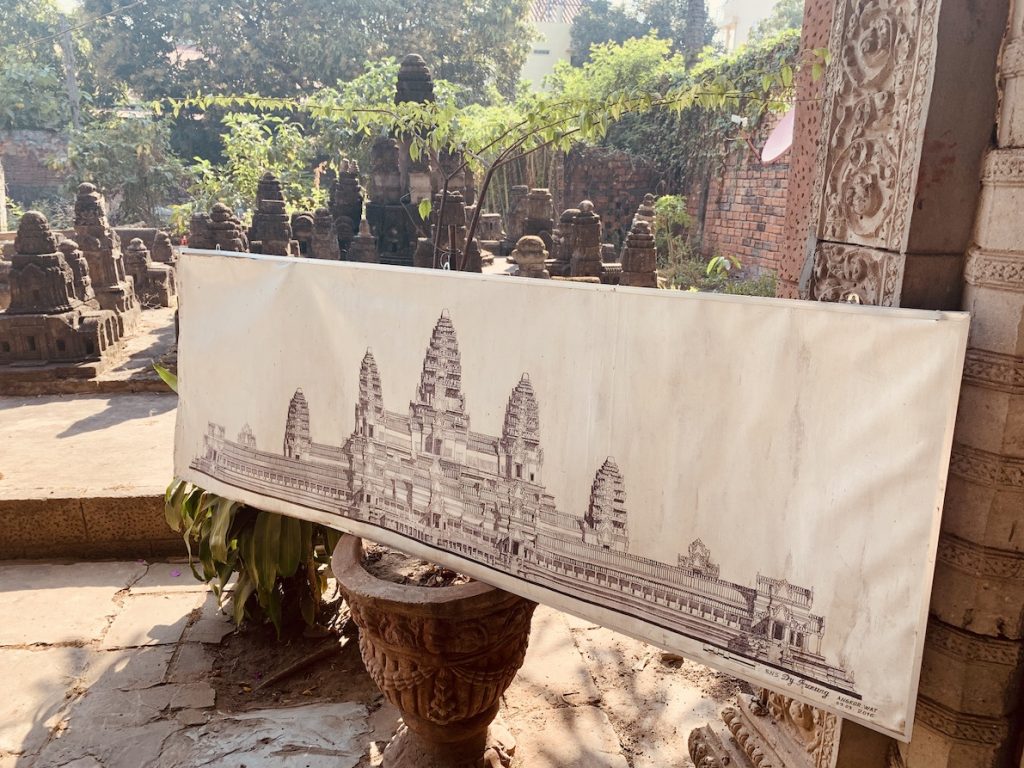 Fully aware that his house could be raided at any time, he snuck out one night and buried his many drawings, paintings and documents relating to his architectural work. Today he displays a number of those pieces right here in his garden. As a result of his quick thinking, Proeung succeeded in saving himself and spent the following years working as a farmer under the watch of Pol Pot’s merciless soldiers. 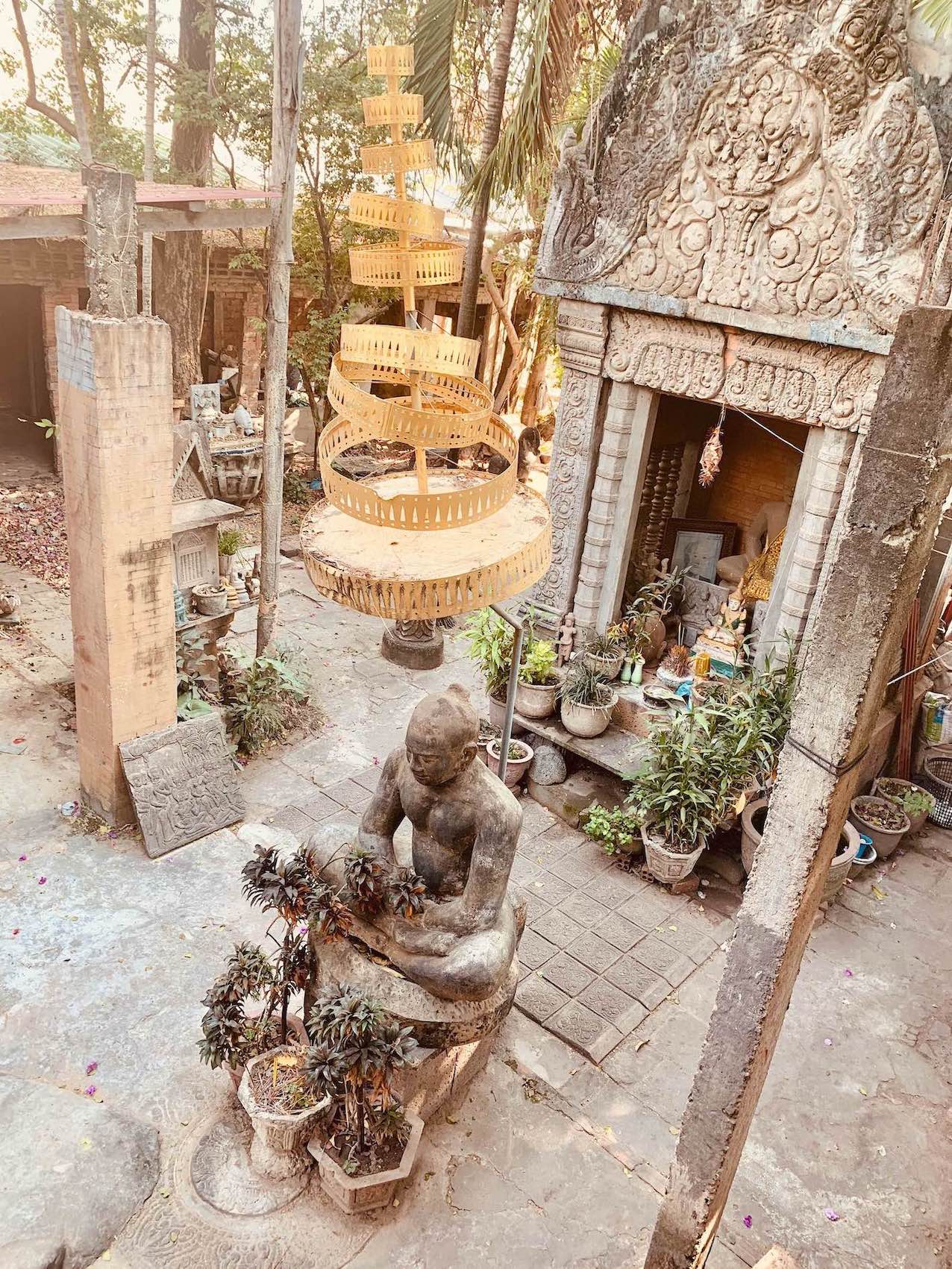 Several online articles about Proeung paint a grisly picture of this terrible period of Cambodian history. A time when those who weren’t executed had to give up their personal wealth, renounce the right to go to school and wear the same black costume as they toiled in the fields. Somehow, through hard work, faith and more than a little luck, he managed to stay alive. 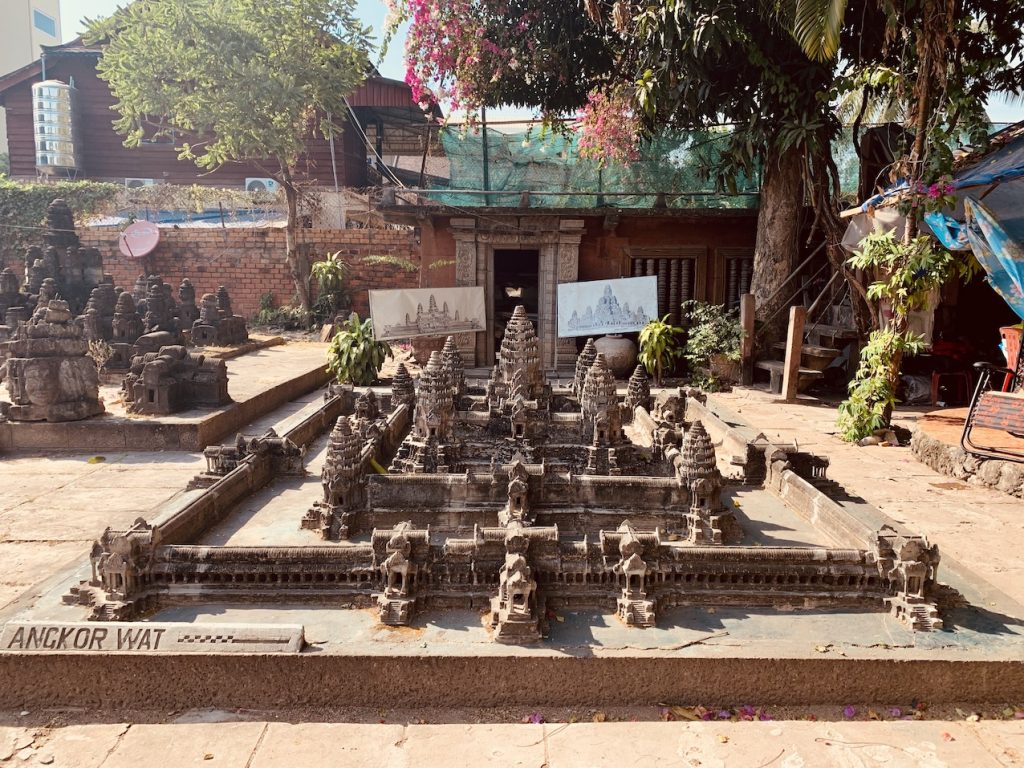 If his experiences under Khmer Rouge control sound like a horror story, the years that followed the fall of the regime in 1979 certainly read like a fairytale. Free from oppression, he threw himself back into his work, painting, drawing and writing around the clock. In the mid 1990s he began work on the project he is now best known for, his amazing miniature recreations of The Angkor Temples. 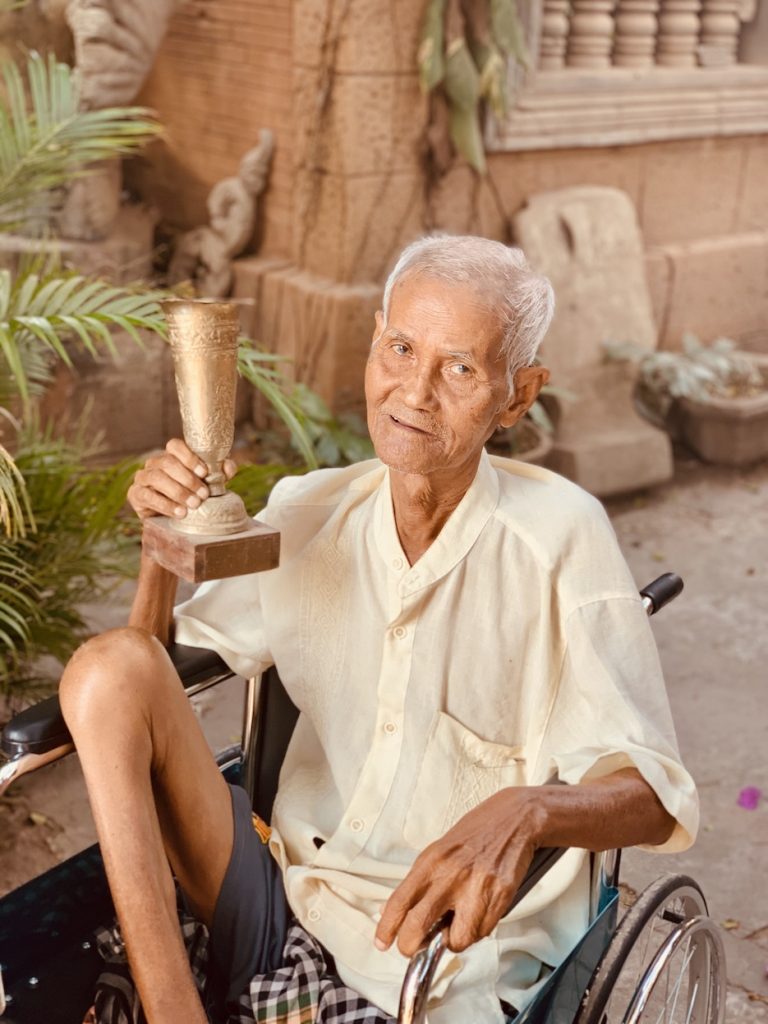 A trophy fit for a king.

During our brief chat, he showed me a trophy given to him personally by King Sihanouk. After hearing Proeung’s story, the king arranged for an exhibition of his work in Phnom Penh. He also wanted Proeung involved in cultural projects educating young Khmer people on their artistic heritage. 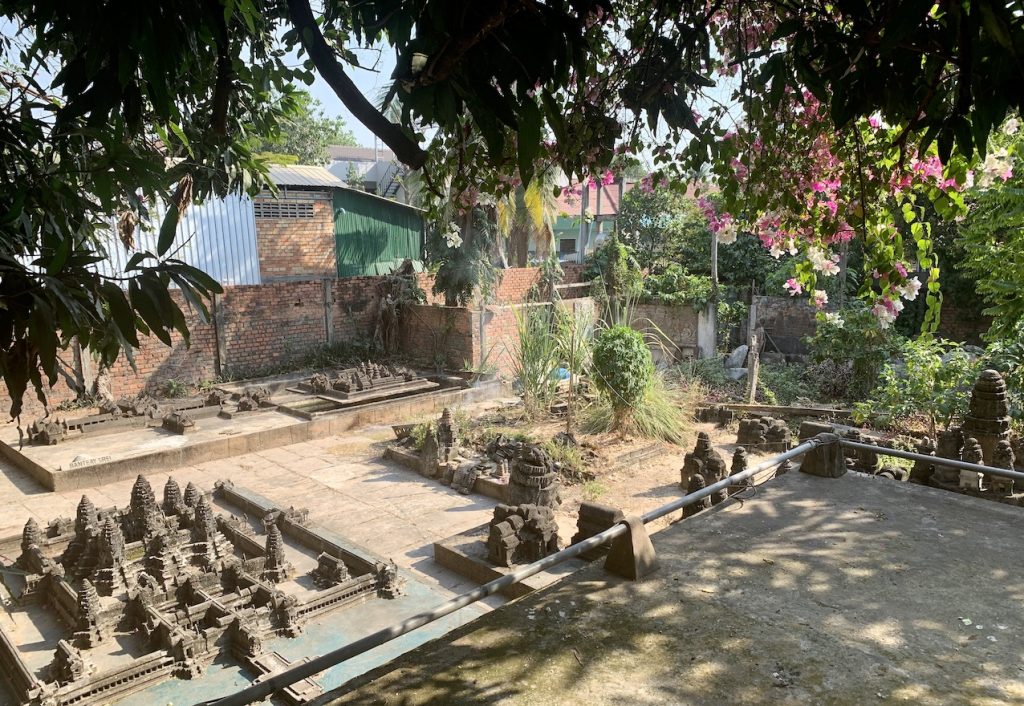 Touring the miniature replicas won’t take you very long. There are about half a dozen on display, all handmade to scale using cement and mouldings. Here, they sit in various states of decay after decades of Siem Reap’s ferocious heat and rains. All he asks is $2 and you can wander around at your leisure. Not unreasonable when you consider he spent six years of his life creating them.

A Treasure Trove of Historical Art. 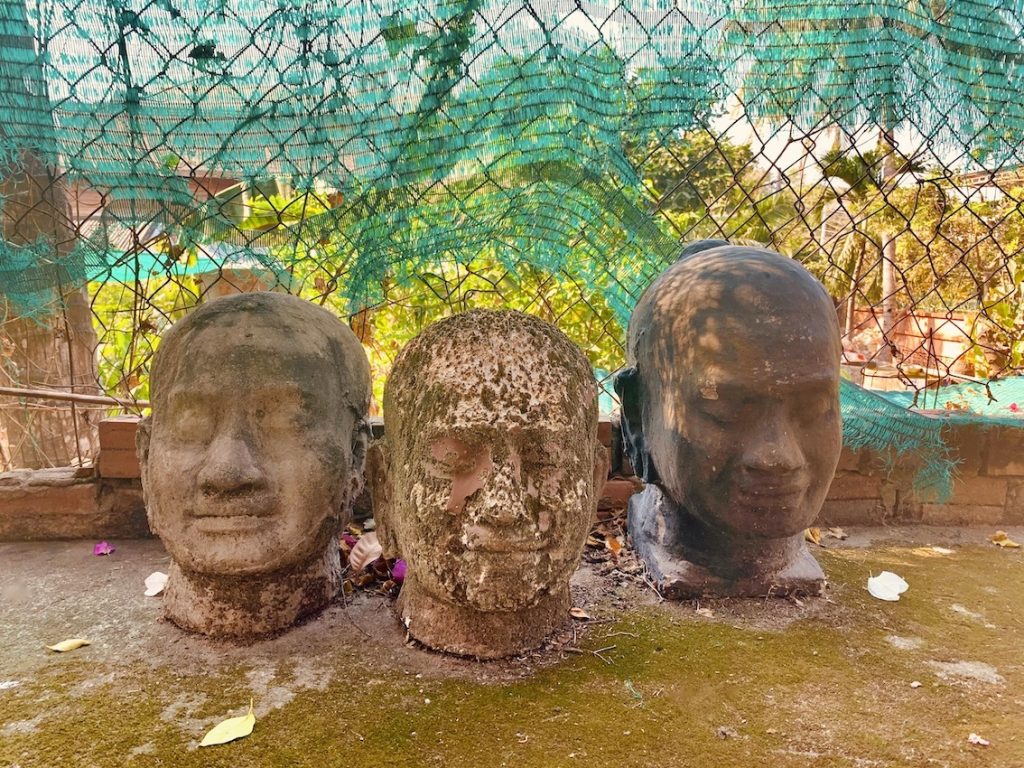 In addition to the miniatures, there are sketches, a few paintings and sculptures randomly scattered around. Some he made himself, others he has collected over the years from his travels around Cambodia. The garden also has its own Buddhist shrine where Proeung and his daughter lay daily offerings. 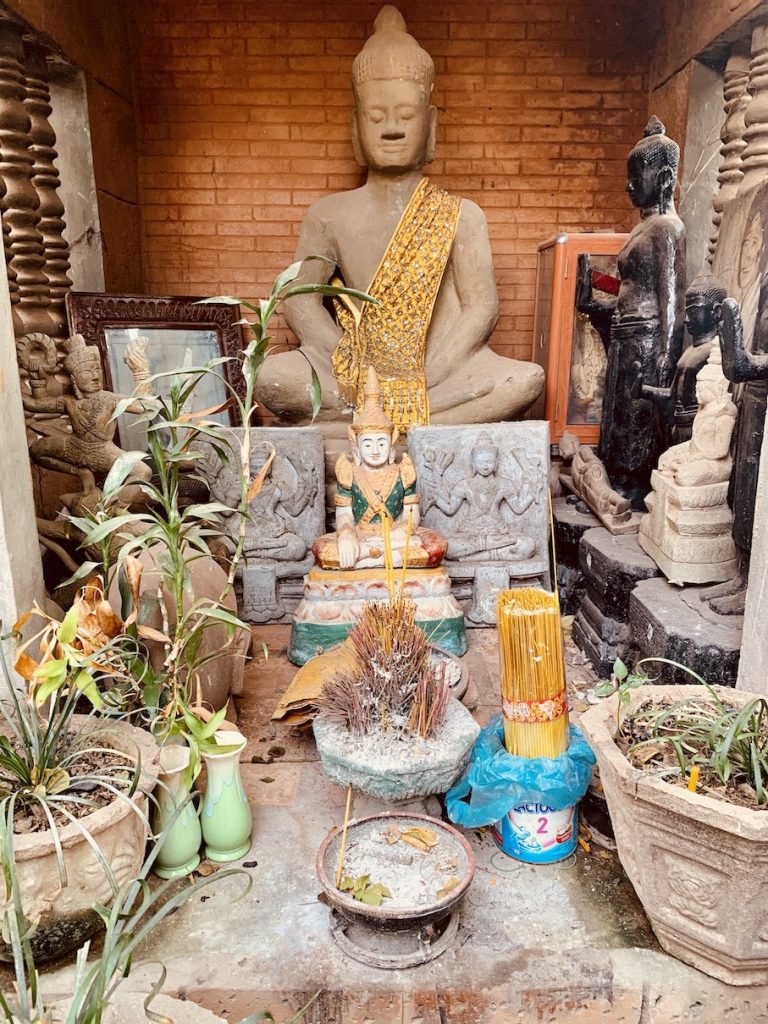 We are so glad we got to meet this inspirational man and to see his impressive miniatures. And it was all thanks to Sladja, who discovered his story online one afternoon. Sadly, Dy Proeung passed away in March 2020, just a few months after our visit. At the time of writing, it appears the garden is still open for visitors. May he rest in peace.