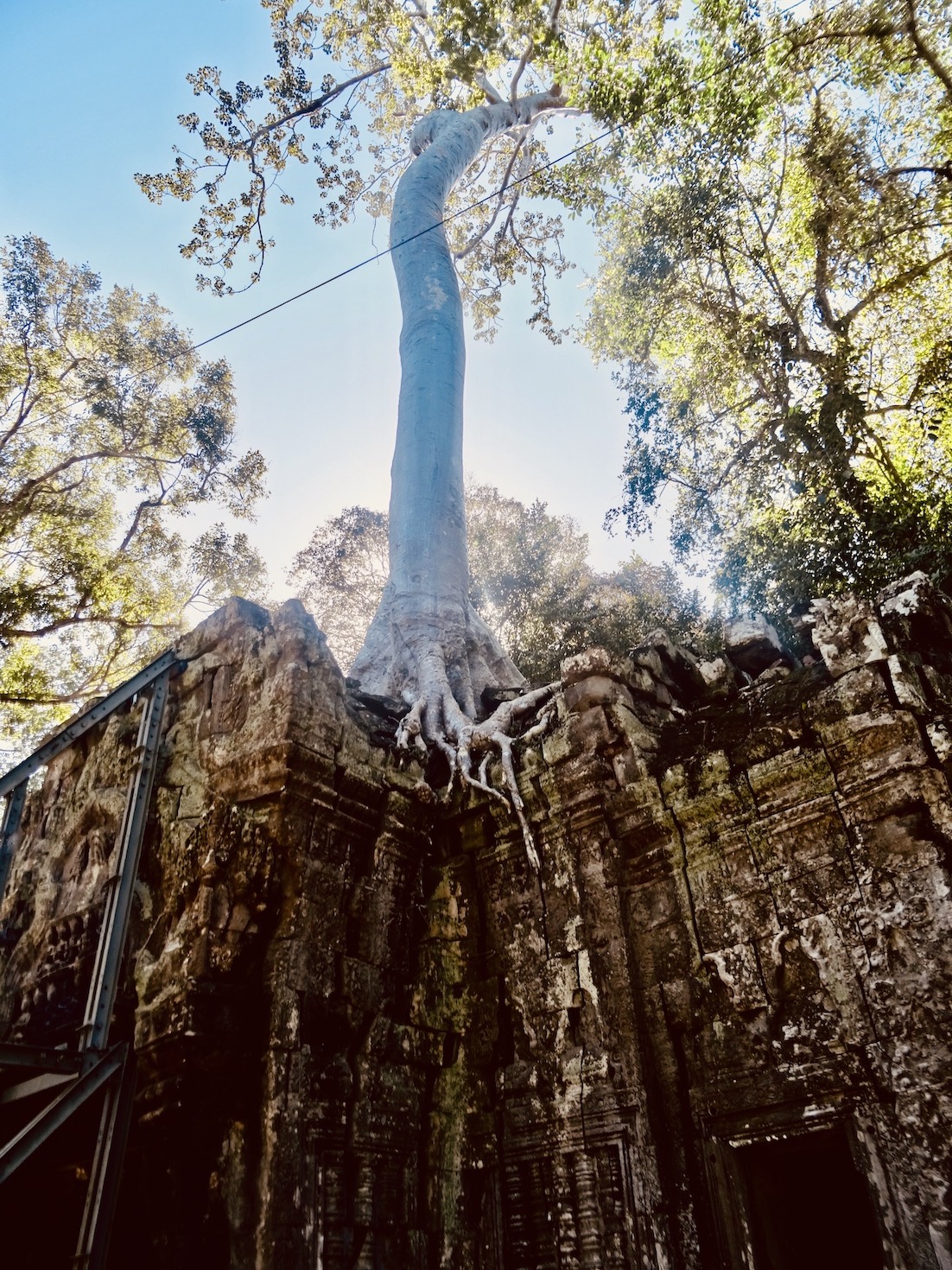 One of the many things I liked about my first day touring Angkor’s amazing temples is that each structure we visited had a clear identity that set it apart from the others. As one of the so-called modern wonders of the world, Angkor Wat was an experience of pure grandeur and scale.

Furthermore, the intimate Bayon Temple was all about its collection of stunning face sculptures. Our third structure of the day was Ta Prohm Temple, also known as The Tomb Raider Temple. That’s right, this place served as a filming location for the Angelina Jolie movie Lara Croft: Tomb Raider. 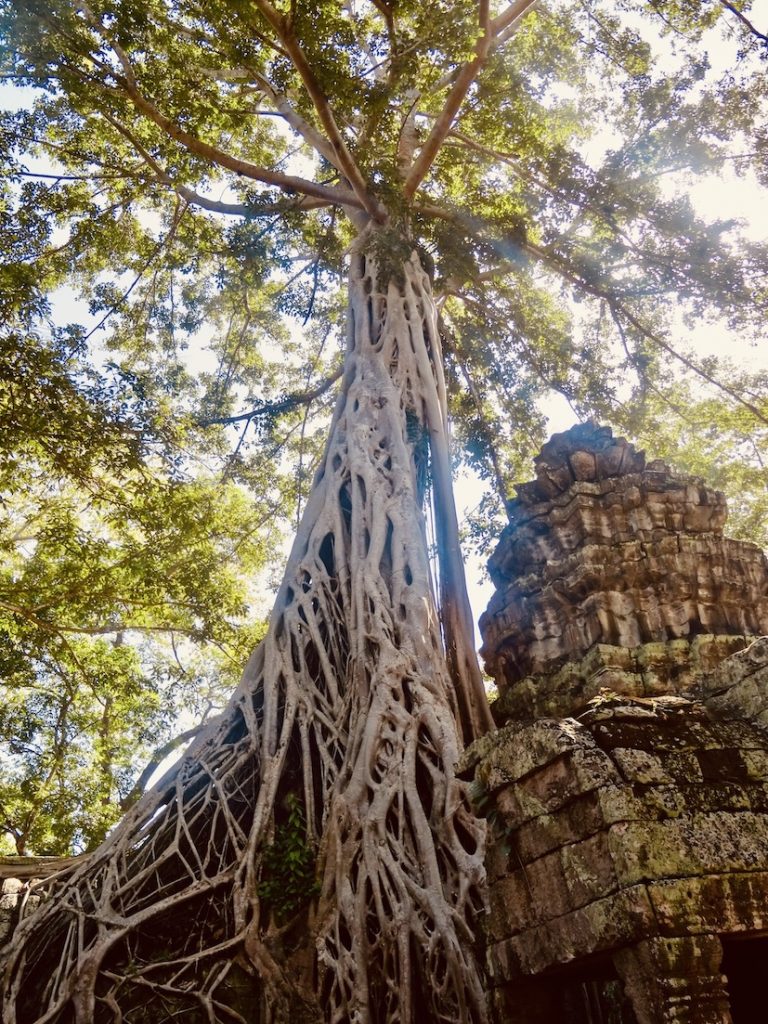 Dating back to 1186, Ta Prohm Temple was dedicated to the mother of Cambodia’s most powerful ruler, King Jayavarman VII. As one of the smaller Angkor temples, historians reckon between 12-13000 people lived here. Among them were around 20 high priests and over 600 entertainers, including singers, dancers and musicians. This suggests the king often used the temple for grand celebrations. 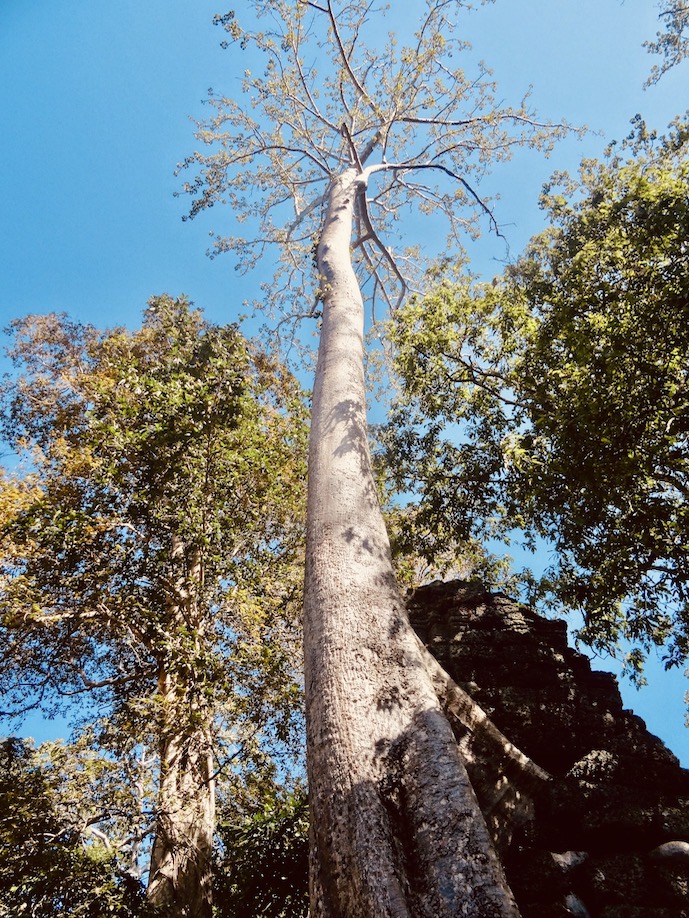 Wherever you look you’ll see incredible ancient trees twisting in and out of the ruins. The temple is also bursting with wild bushes, plants and flowers. As a result, some of the staircases and alleys are impassable due to thick vegetation and mounds of rubble.

In fact, the pioneering Angkor historian Mauricie Glaize claimed that of all the Angkor temples it was Ta Prohm that had most seamlessly merged with the surrounding jungle. 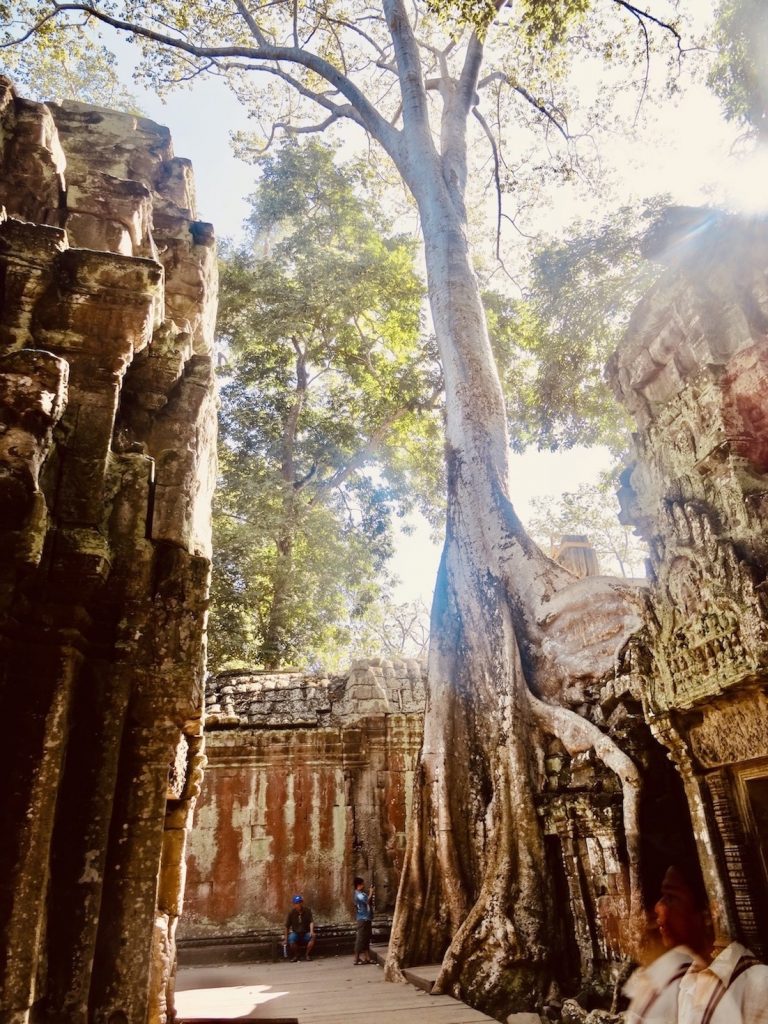 Tomb Raider really helped put Ta Prohm and indeed Cambodia itself on the map. Indeed visitors from all over the world are keen to check out The Tomb Raider Tree. This is where Lara Croft (played by Angelina Jolie) famously stops to pick a Jasmine flower before the ground cracks open and swallows her up.

Another spot to seek out is Ta Prohm’s curious dinosaur carving, the source of much debate among historians. What exactly were the Angkorians doing creating images of a stegosaurus? 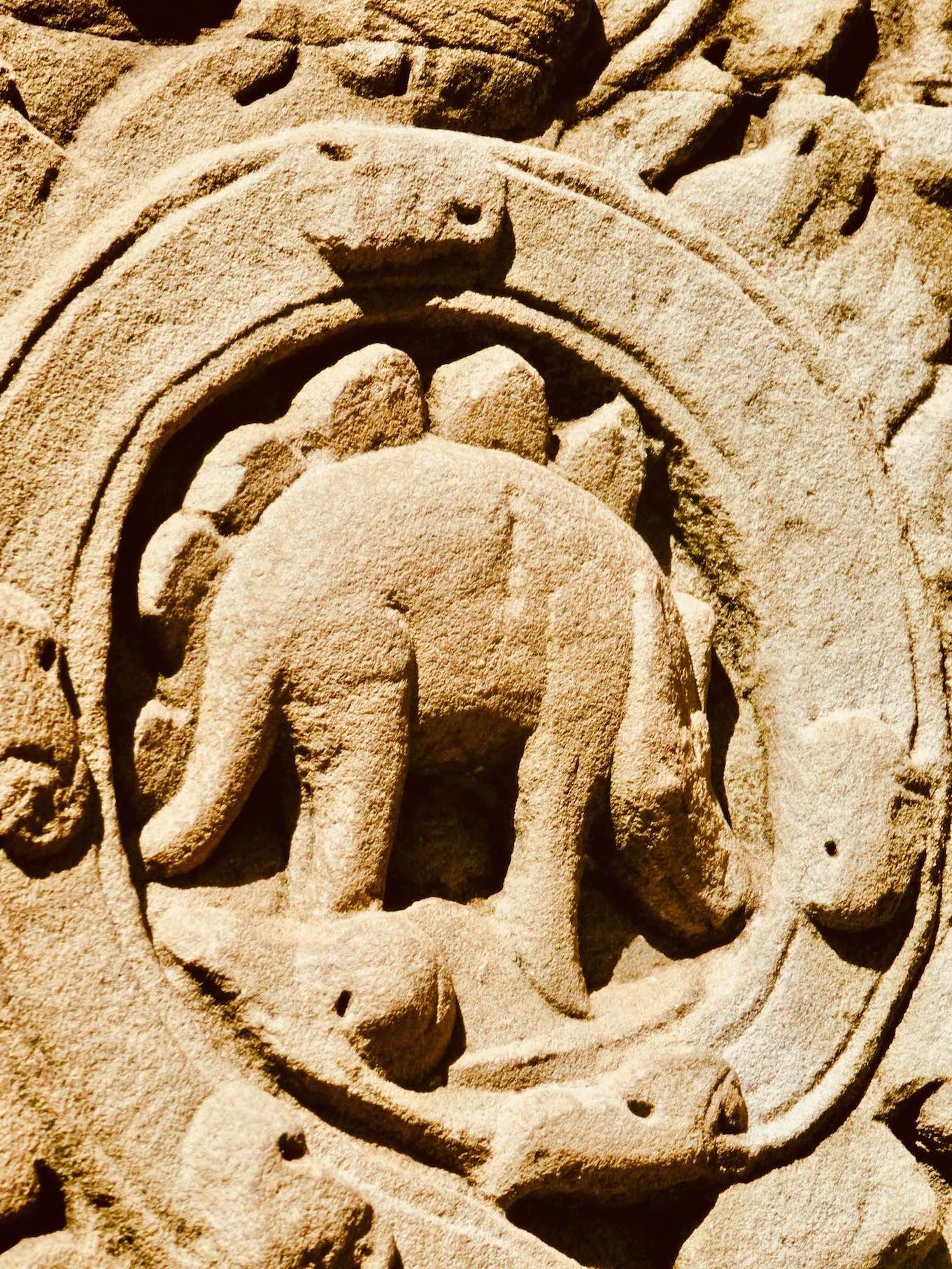 There are all kinds of wild theories if you dig around the internet. However, many experts have simply concluded it’s a hoax of some kind. We hadn’t heard anything about the dinosaur prior to our visit. When my Cambodian friend first told us about it, my buddy Henry made a bet that no such carving existed. But of course we discovered it and consequently dinner was on Henry that night! 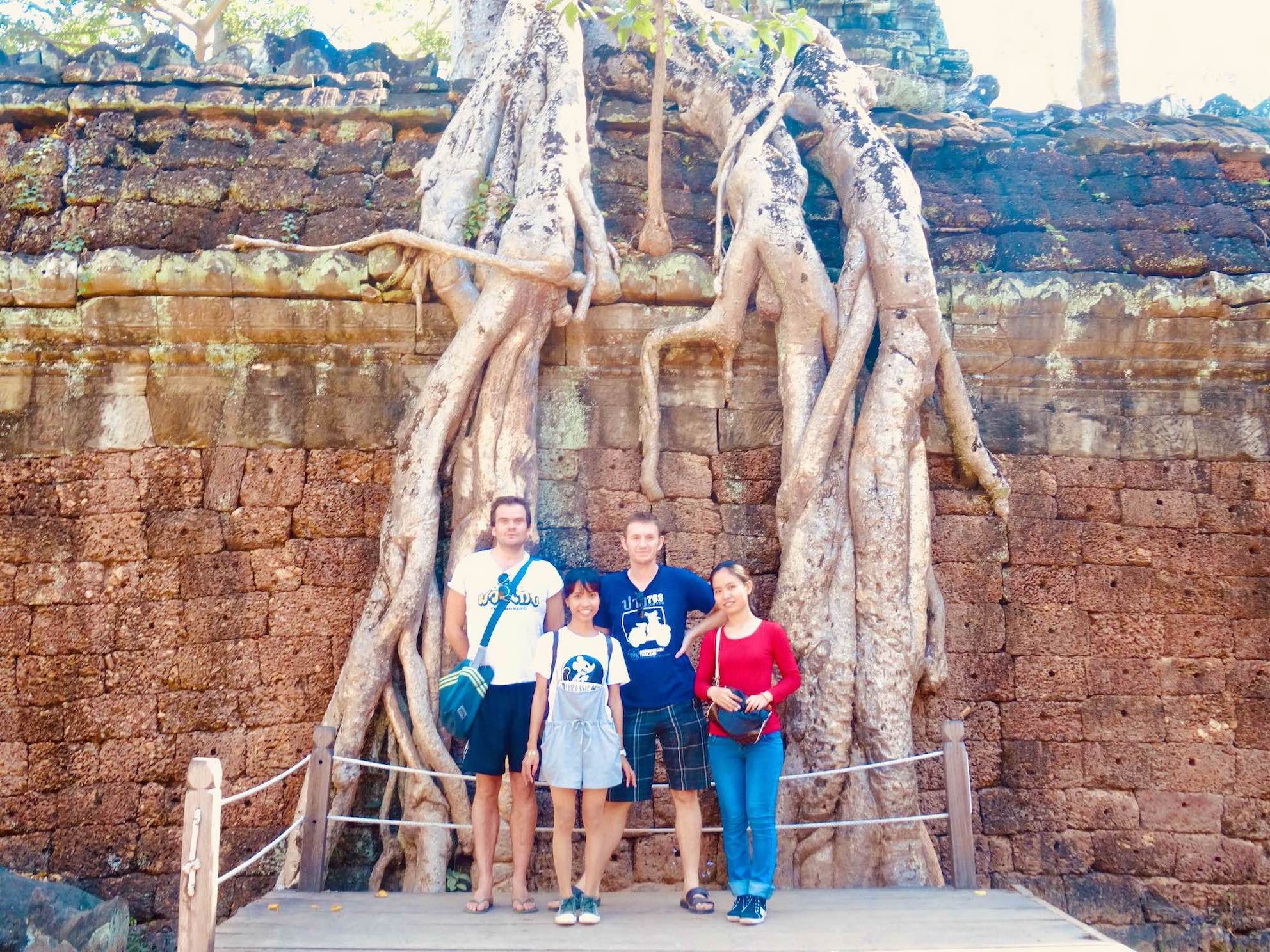 You can visit Ta Prohm Temple with The Angkor Pass, purchased both online and in person at The Angkor Archaeological Park Ticket office. 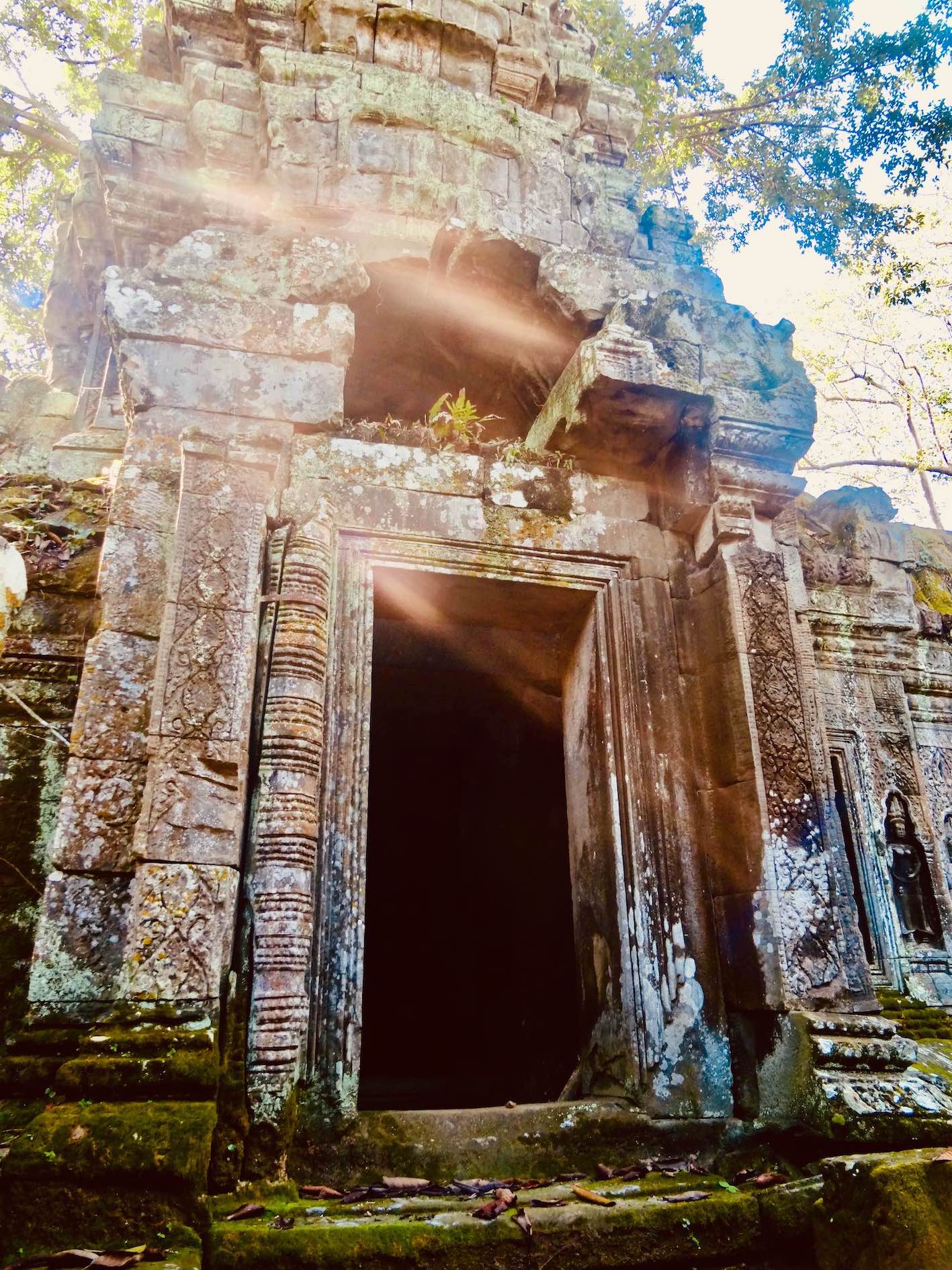 For more on this incredible area of Cambodia, check out my other travel reports on The Temples of Angkor.