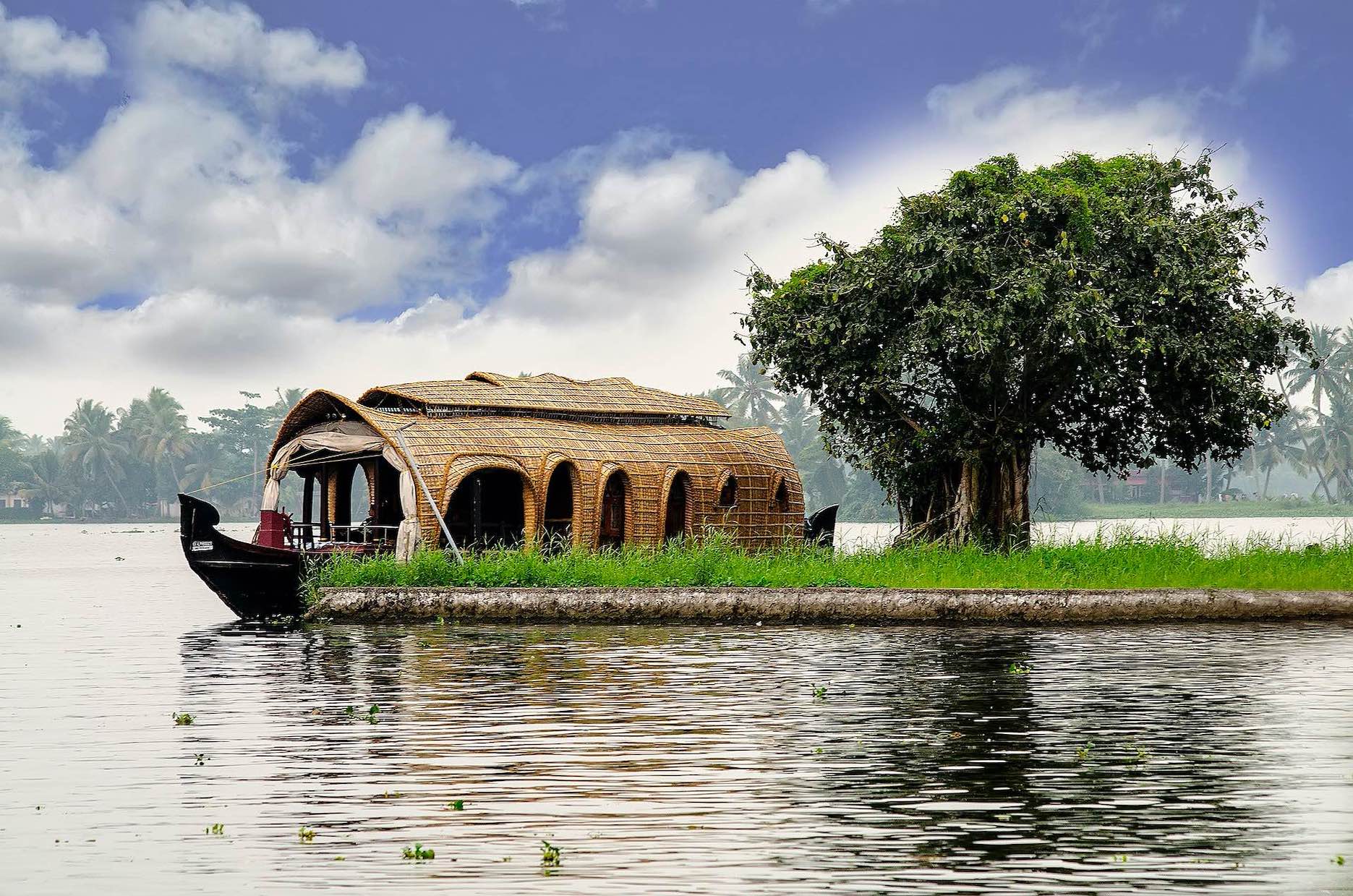 Ah, Kerala, the final leg of my cross-country adventures around India in 2004. Looking back, I think Allan and I were thoroughly knackered, despite the recharge we’d had on the lazy beaches of Benaulim in Goa. Thus we agreed to kick back and stay awhile, renting an apartment in the Portuguese flavoured neighbourhood of Fort Kochi in the port city of Kochi.

Criminally, I have no photos of that house, and very few indeed of the neighbourhood. Happily though, I have fond memories of hanging out in the local cafes and restaurants. And lovely evening walks down by the port to look at the rows of Chinese fishing nets fluttering in the sea breeze. 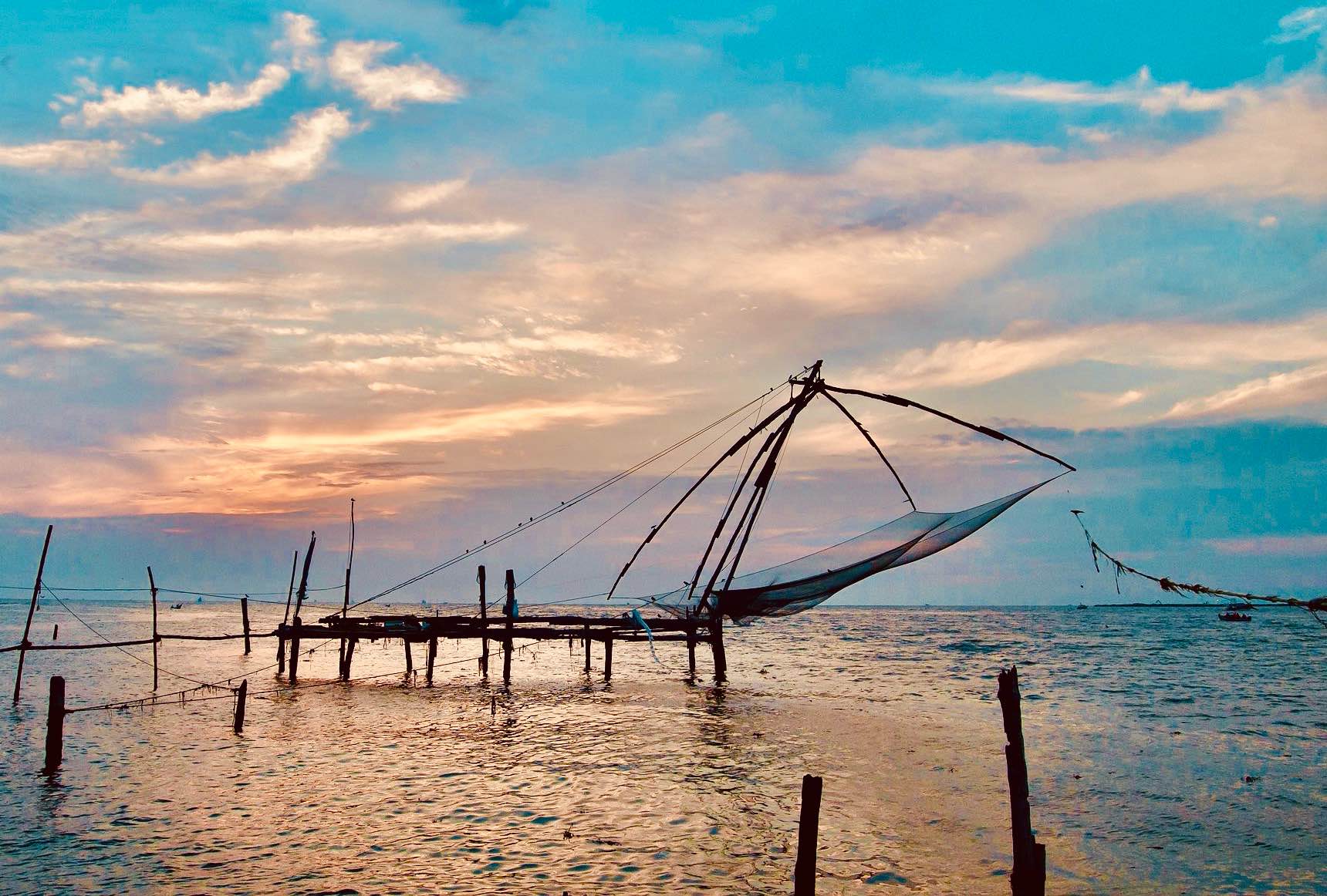 After a few days Lisa and Phil joined us in the house and we all lived communally for some weeks. Occasionally we set off on our various solo projects, other times we made field trips together. Of these, how could I ever forget our afternoon cruising the Kerala Backwaters, a labyrinthine, 900-kilometre network of interconnected rivers, lakes and lagoons. 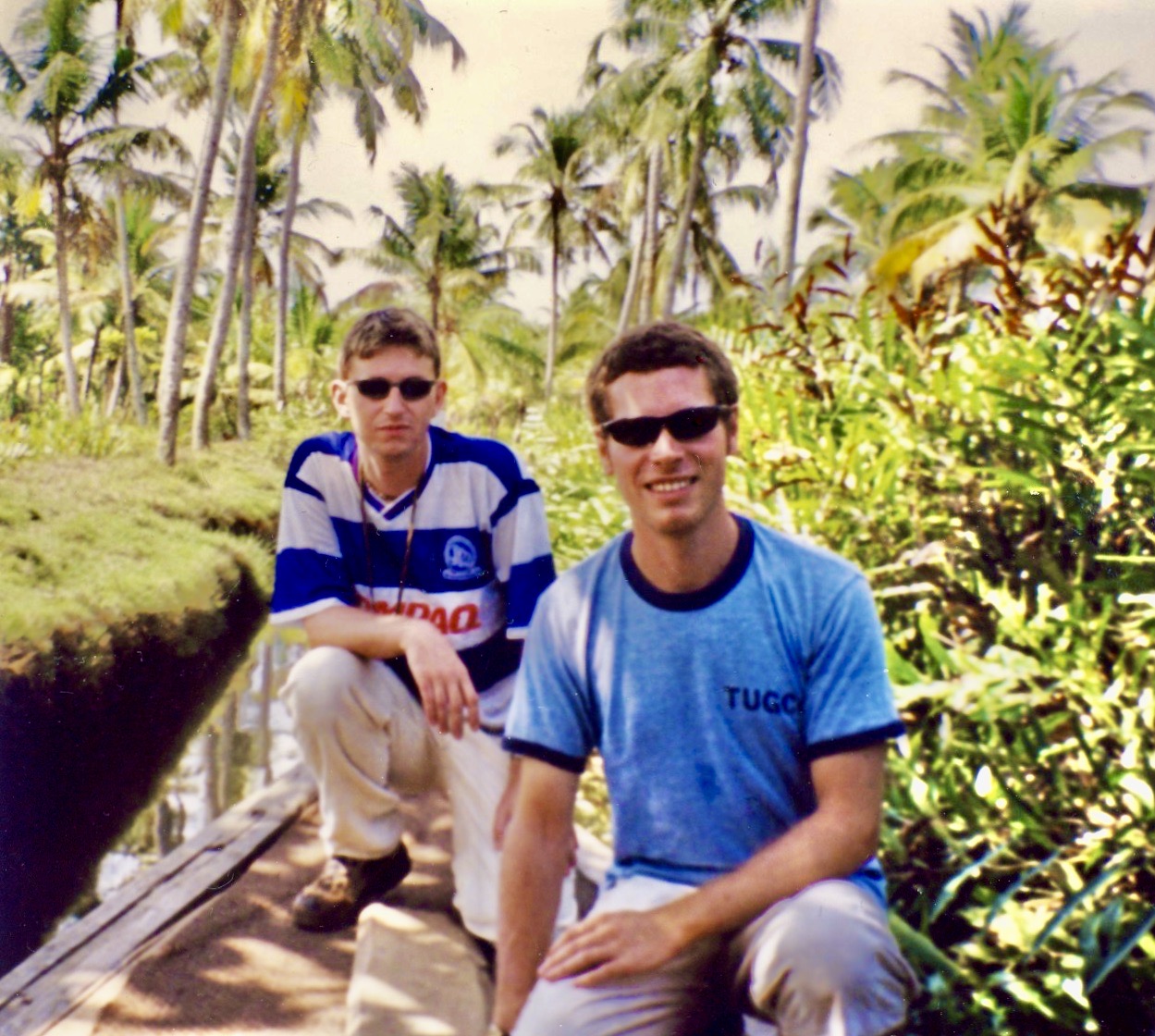 Our vessel that day was a magnificent, traditional thatched wooden houseboat, known locally as Kettuvallam. I couldn’t tell you which company we went with or how much we paid. What I do recall is that there were perhaps eight of us on the boat and that our captain was a loveable character with an infectious positivity. 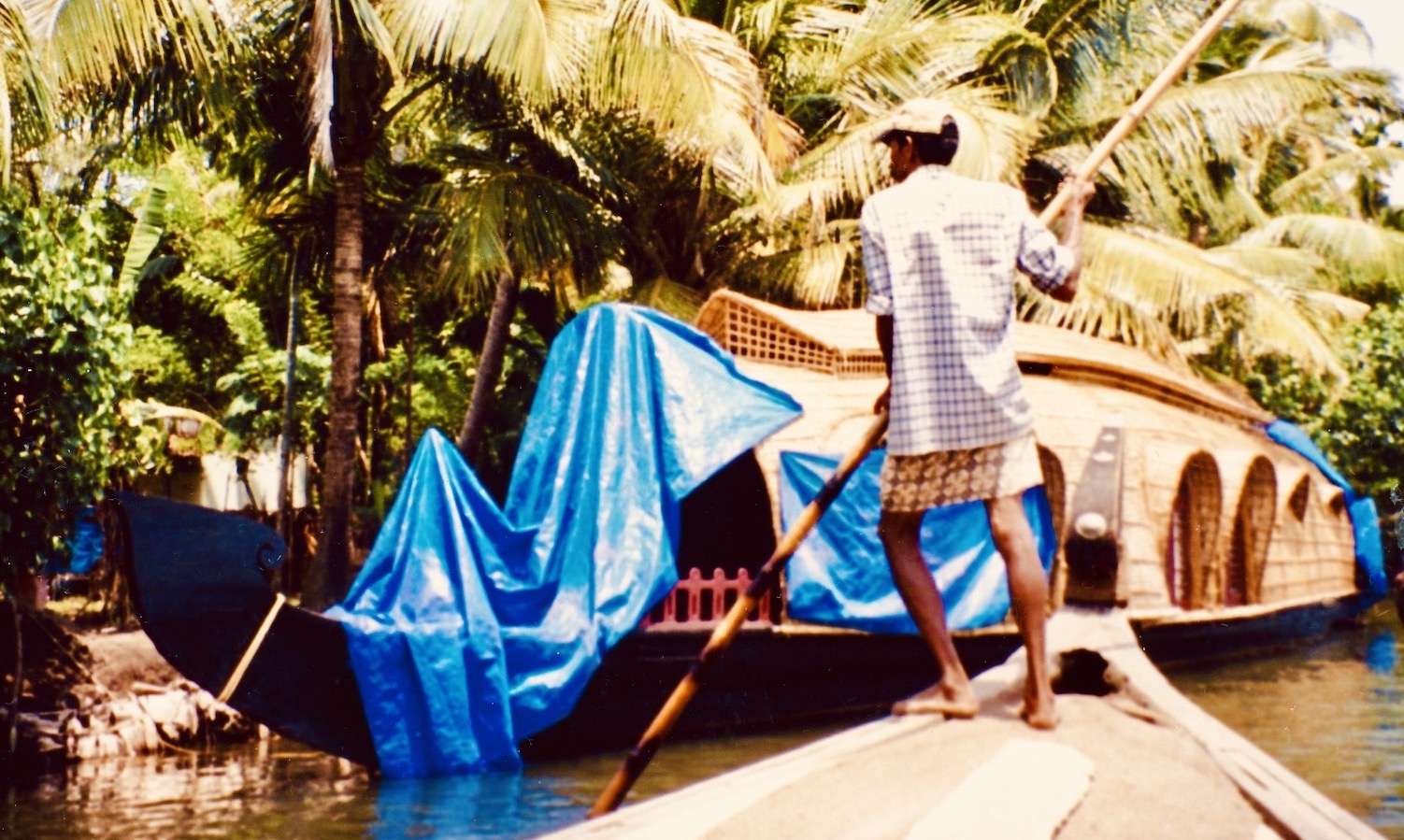 He was a wiry beanstalk of a man. Nevertheless, he showed great strength in propelling us through those countless canals under the burning sun. Using only a long wooden pole and seemingly magical reserves of elbow grease. During one memorable stop, he also wowed us with his agility by scampering up a tree to claim an armful of coconuts. We oohed, aahed, clapped and gratefully guzzled down the contents of our bounty. 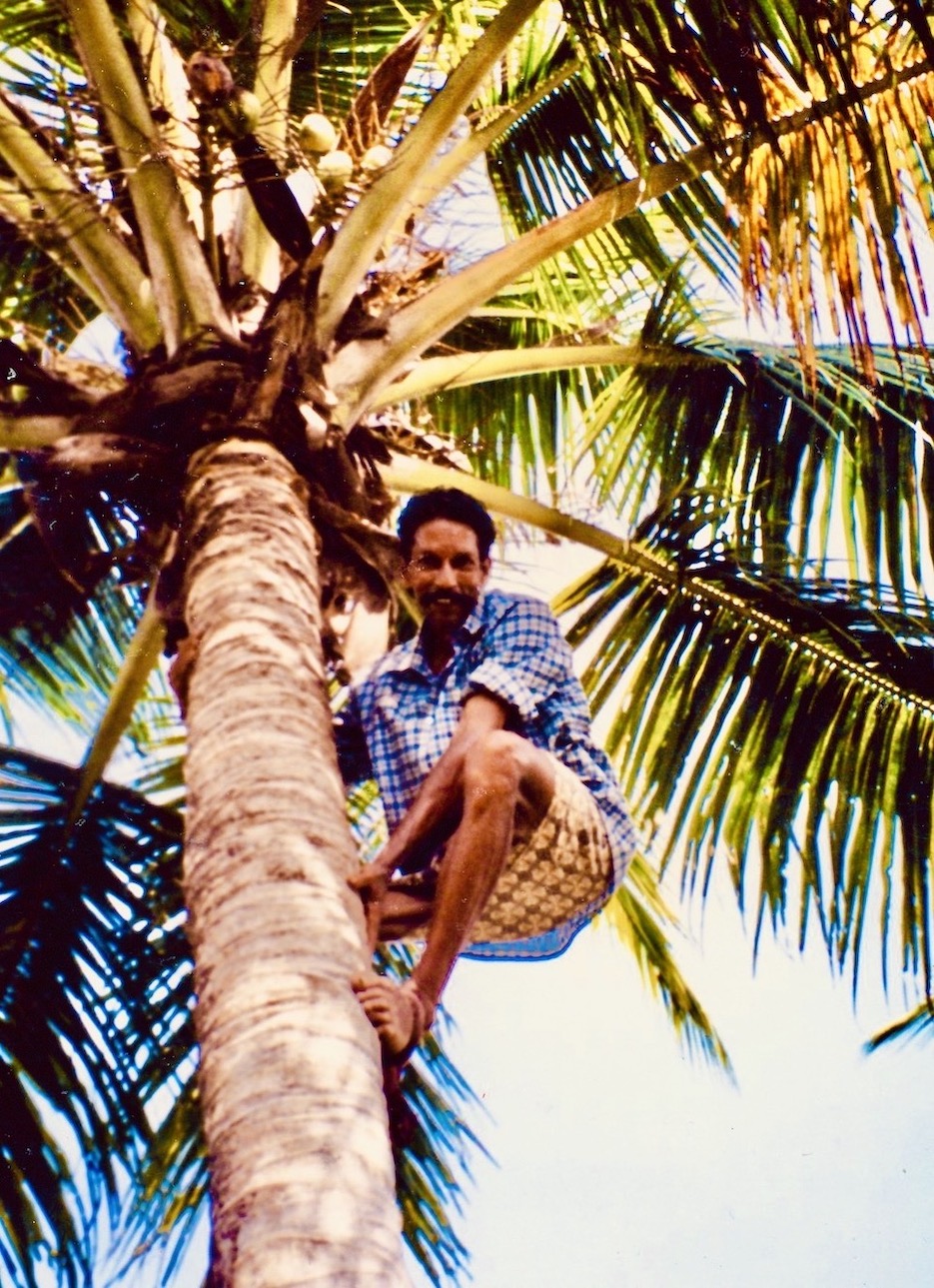 We stopped at a few villages along the way to see local folk making a range of craft products from coconuts. As is common with Kerala Backwater tours, Mr. Captain also made sure to moor the boat for a spell so that we could take a swim. It still makes me chuckle to think of how some in our party downright refused to swim in the “filthy water”. Call it bravery, call it the folly of youth, but I had no such concerns. What can I say, I’m still alive. 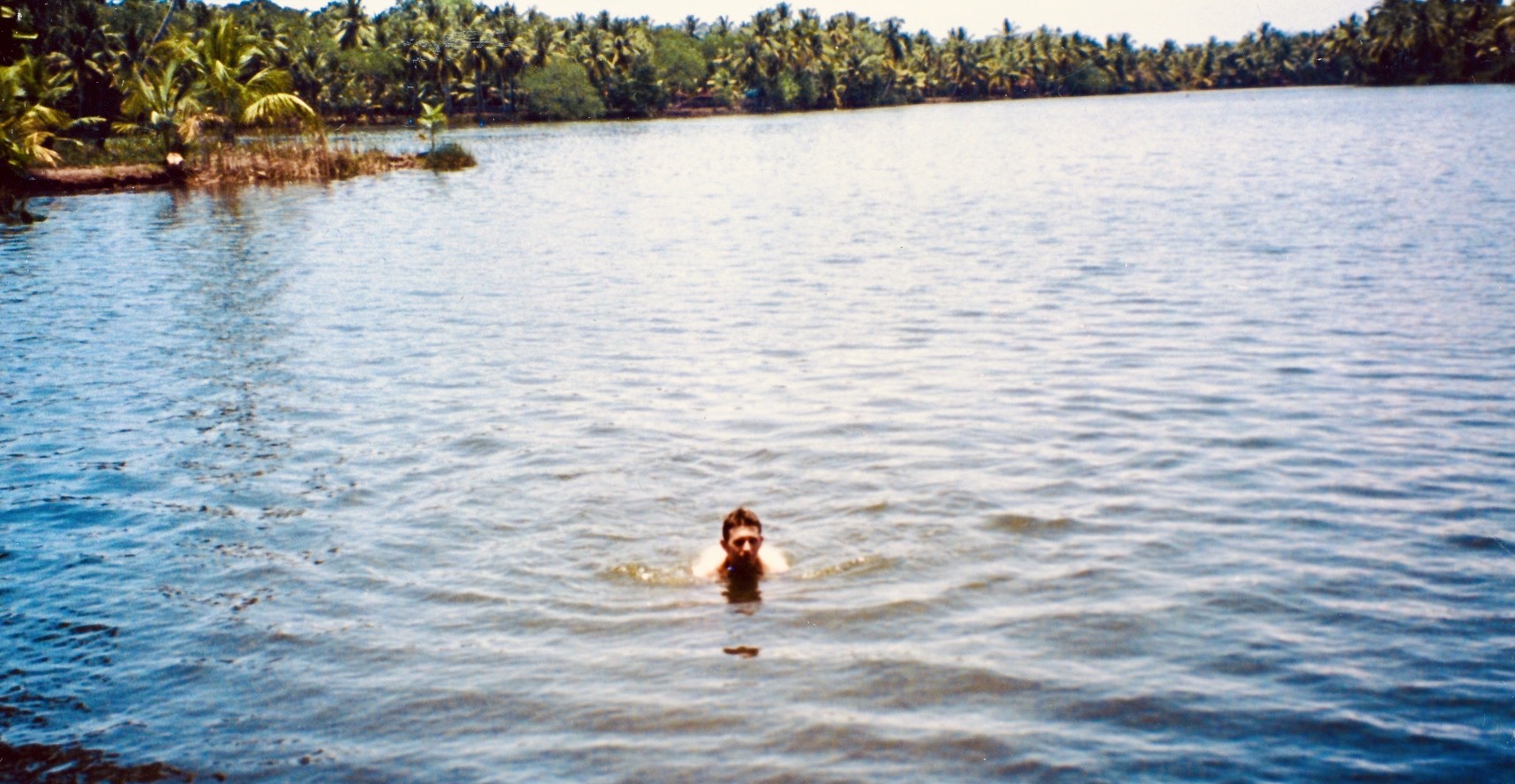 After swimming, our captain presented us with a delicious traditional lunch of chicken curry with rice and vegetables, served on large elegant beds of banana leaves. 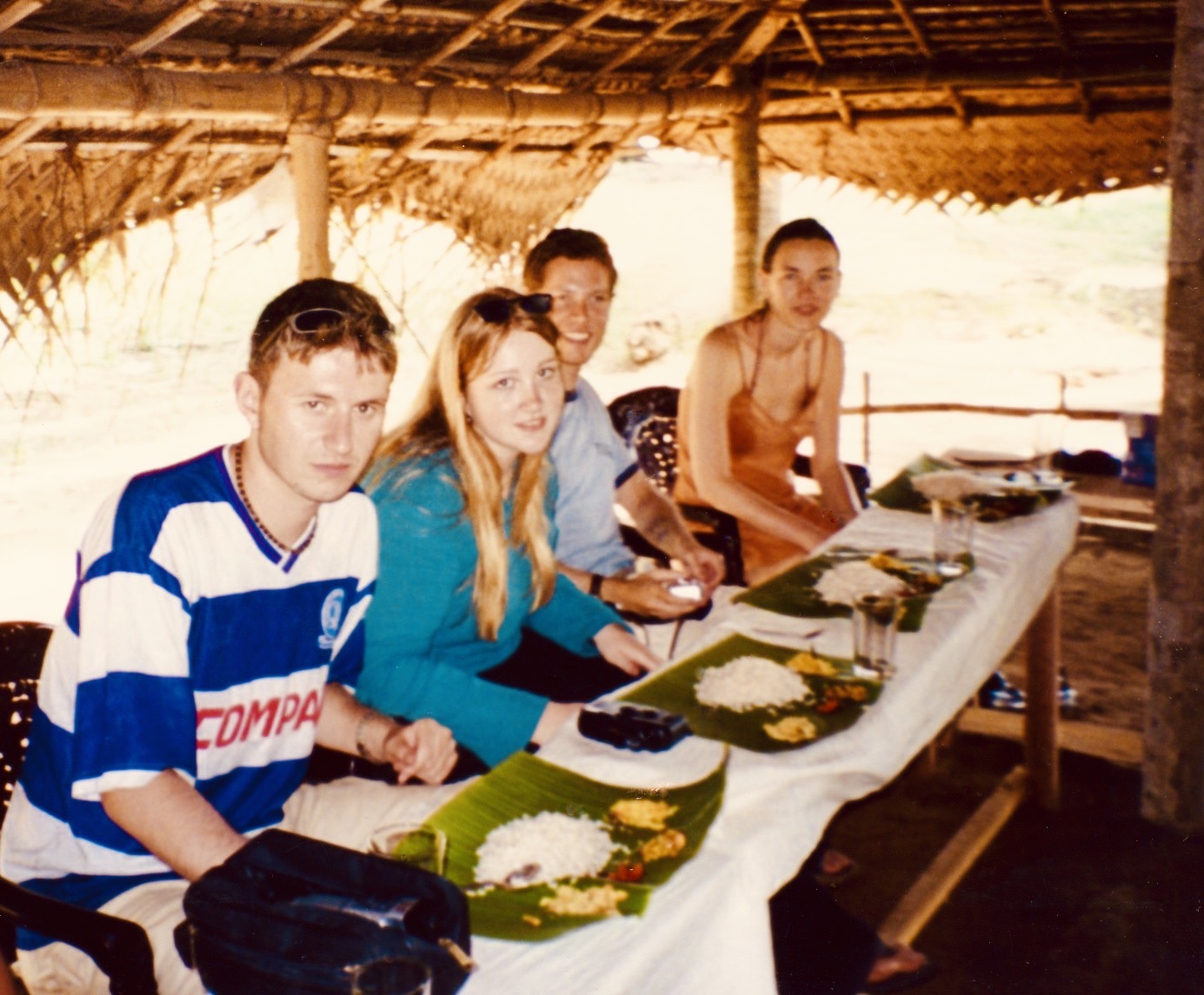 Another memorable day came at Kodanad Elephant Sanctuary, one of Kerala’s most respected elephant training centres. What a stunning location it had, set in and around the Malayattoor Forest Range on the southern banks of The Periyar River. This was my first time face to face with wild elephants and I was absolutely blown away by the experience. 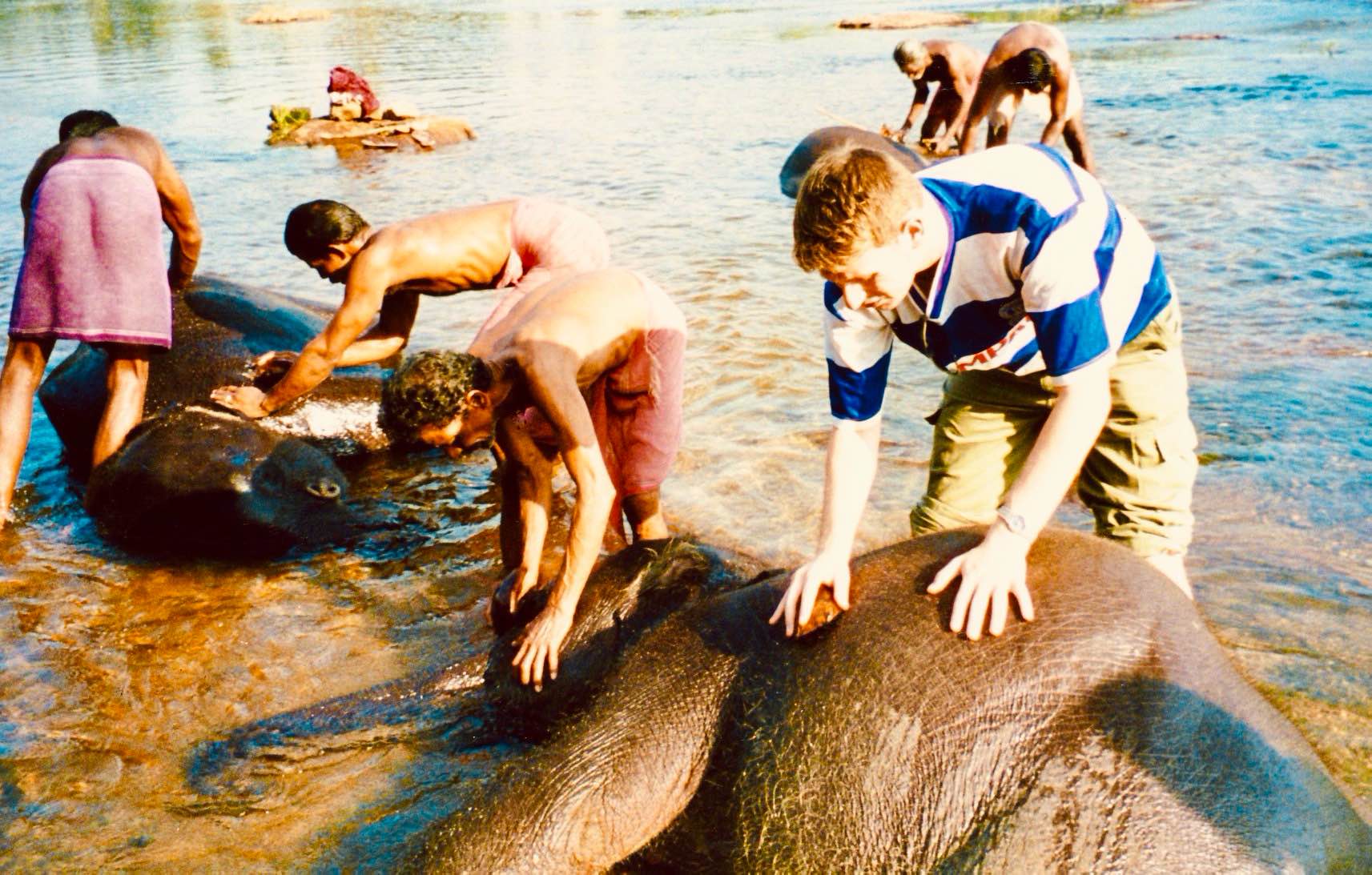 Dating back to the 1950s, the sanctuary used to be the region’s largest elephant centre. These days, from what I understand, it’s a comparatively small operation with an ever-diminishing number of elephants. That day we met about half a dozen of the creatures, while our arrival had been expertly timed for the sanctuary’s morning bathing ritual.

Today we live in an unparalleled age of accessible information. As travellers we‘re now much more clued up about what’s really going on in the world. More well versed, shall we say, in the dos and don’ts of responsible tourism. Back in 2004 though the internet was in its infancy and, speaking frankly, I was a little wet behind the ears. 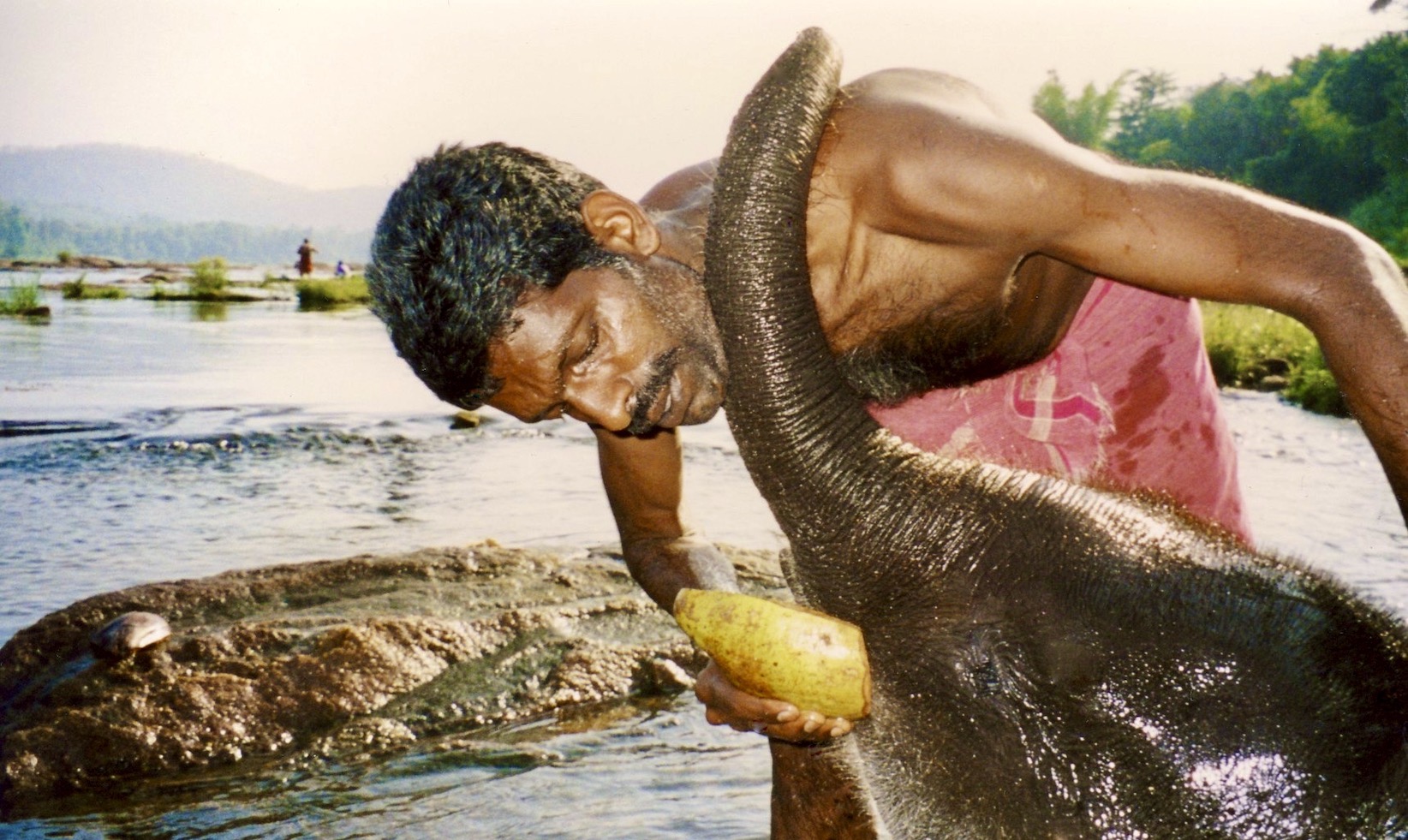 I don’t think I was even aware of elephant cruelty. Moreover, I certainly didn’t do much research on Kodanad prior to my visit. Glancing over some of the recent reviews on TripAdvisor, I can see a few damning reports regarding elephant treatment.

All I can say is that I don’t recall seeing any abusive behaviour, nor indeed any evidence of chains. In fact, as the above photo hopefully attests, I witnessed a strong and intimate bond between trainer and beast. To me, even as a naive youngster, these elephants didn’t look unhappy in any way. I sincerely hope there was nothing unsavoury going on behind the scenes. 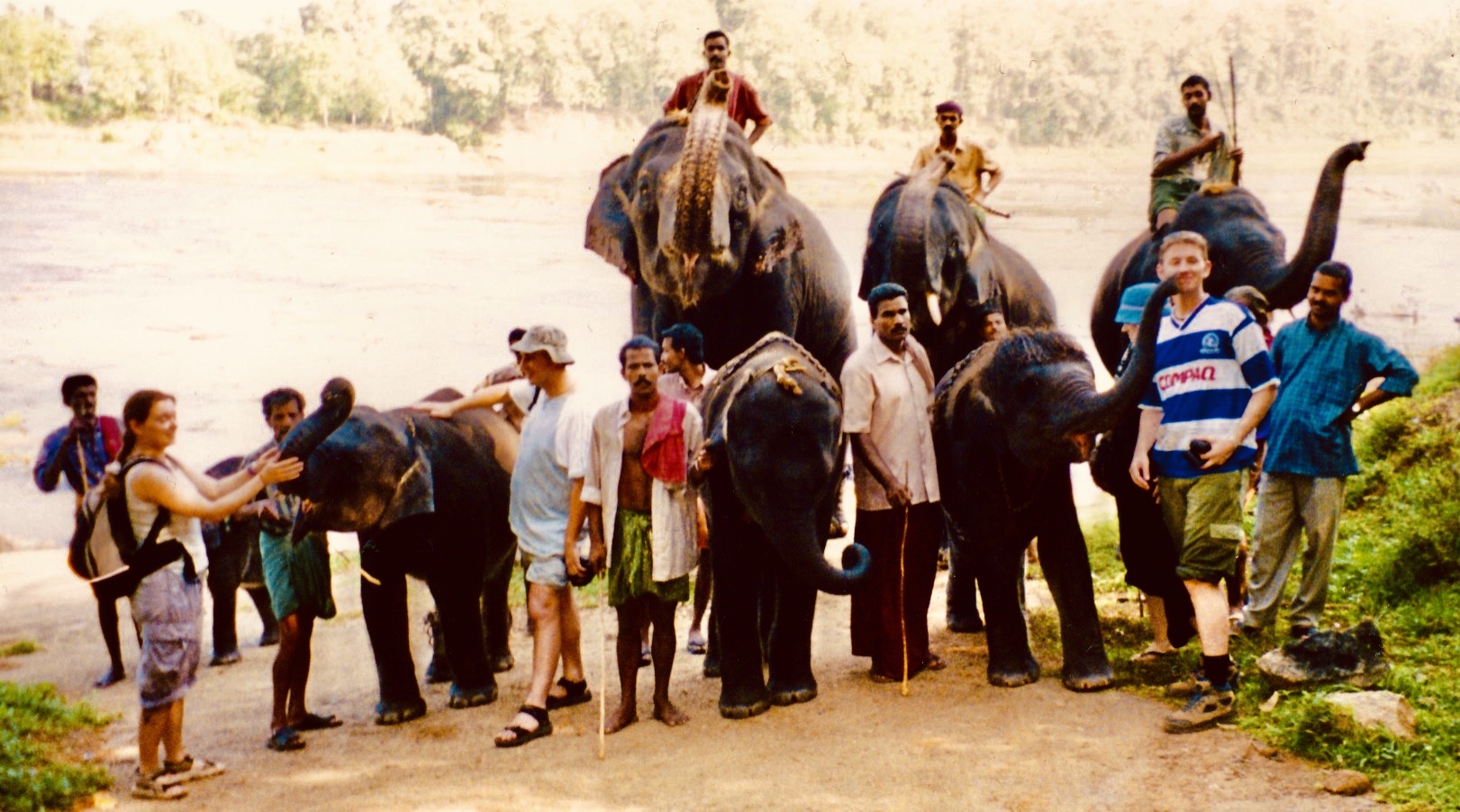 The elephant is considered an auspicious animal in India. As a result, these majestic beasts often find themselves integrated into public festivals, celebrations and processions. Luckily, we caught such an event one afternoon when we found ourselves among the crowds at the annual Kerala Elephant Festival.

This grand celebration of elephants brings together Indian people of all faiths. Locals, meanwhile, decorate elephants with glittery headdresses and flower necklaces. I can’t help but wonder, in this day and age, how much longer it can go on for with growing pressures from domestic and international animal rights groups. 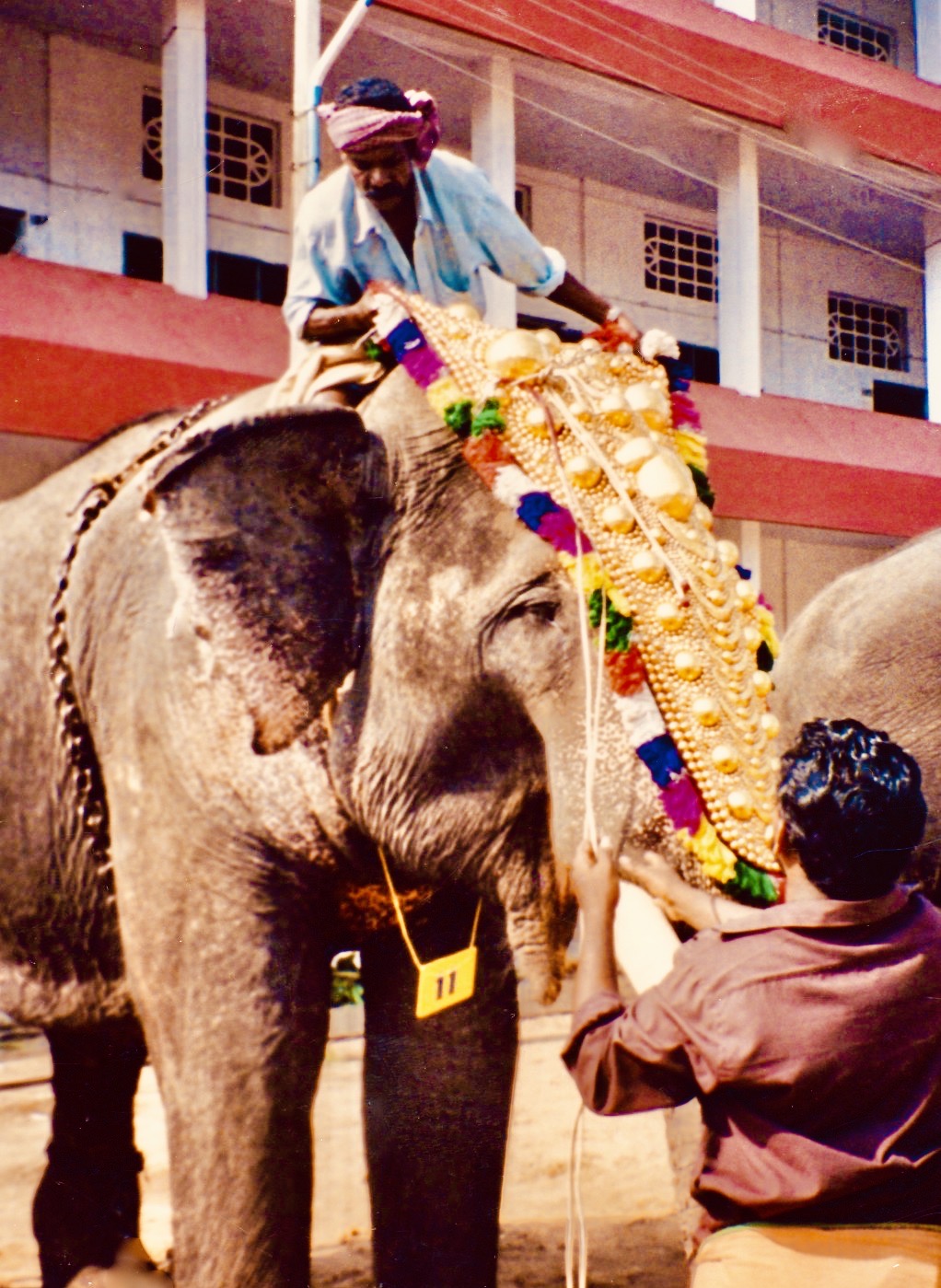 Kerala was my last Indian hurrah. One morning Allan announced his departure back to Scotland in order to deal with a business matter. A few days later I felt it was time to draw my own trip to a close. Unfortunately for me, that meant a gruelling 48 hour train journey back up to New Delhi. And then of course the long flight to The UK. For a more detailed look at the experiences documented in this article, along with the lowdown on that epic train journey, have a read of my short story Forty Eight Hours.

On the Train to New Delhi. 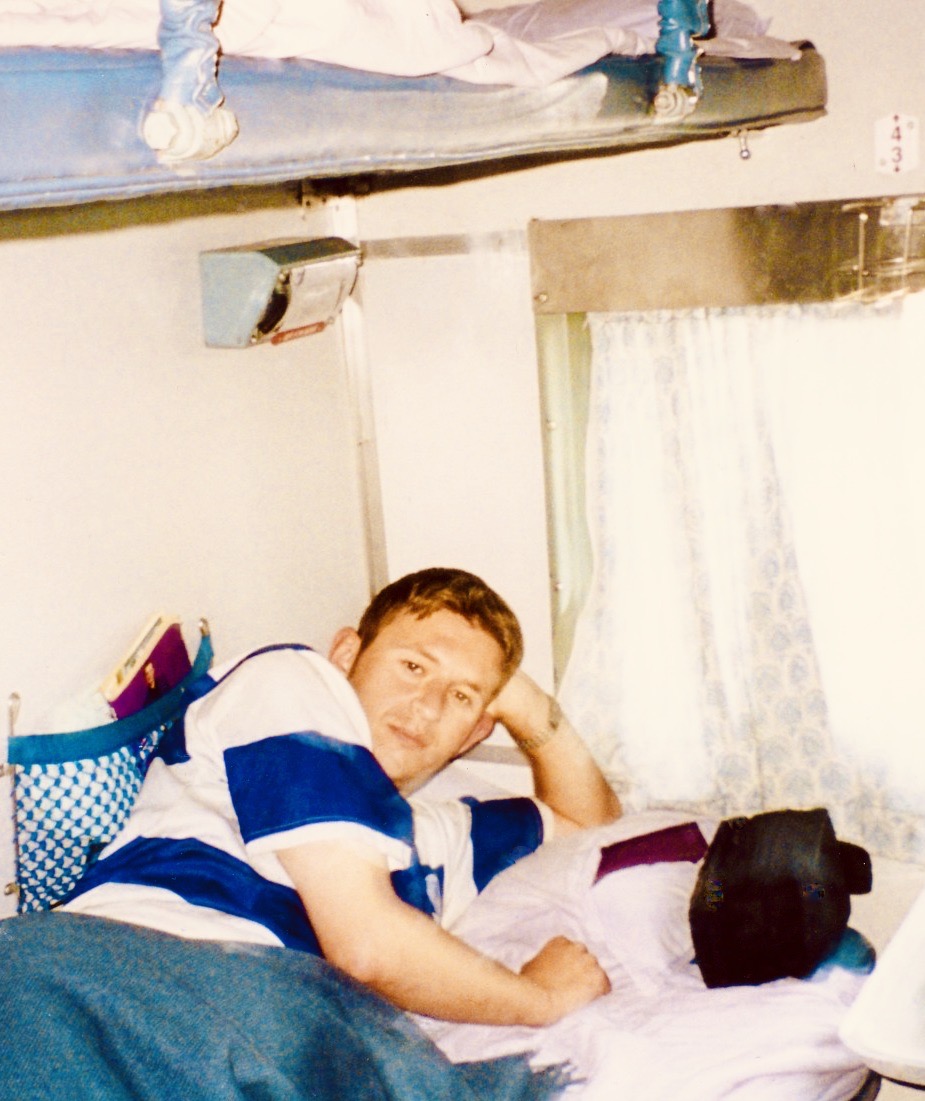 Thanks, dear readers, for sticking with me through my Snippets of India over these past weeks. It’s been fun cobbling together this series, which I feel is a key addition to the LT archives. It’s always fun, not to mention highly nostalgic, to look back on one’s early travel days. Thanks India, for teaching me some valuable life lessons. For showing me what kind of traveller I wanted to be. For giving me a lifelong love for curry and the inspiration to write and share.

Like this? Why not check out more reports from my long ago trip to India.

For a more detailed and personalized account of my time in India, have a look at my short story collection Incidents in India.