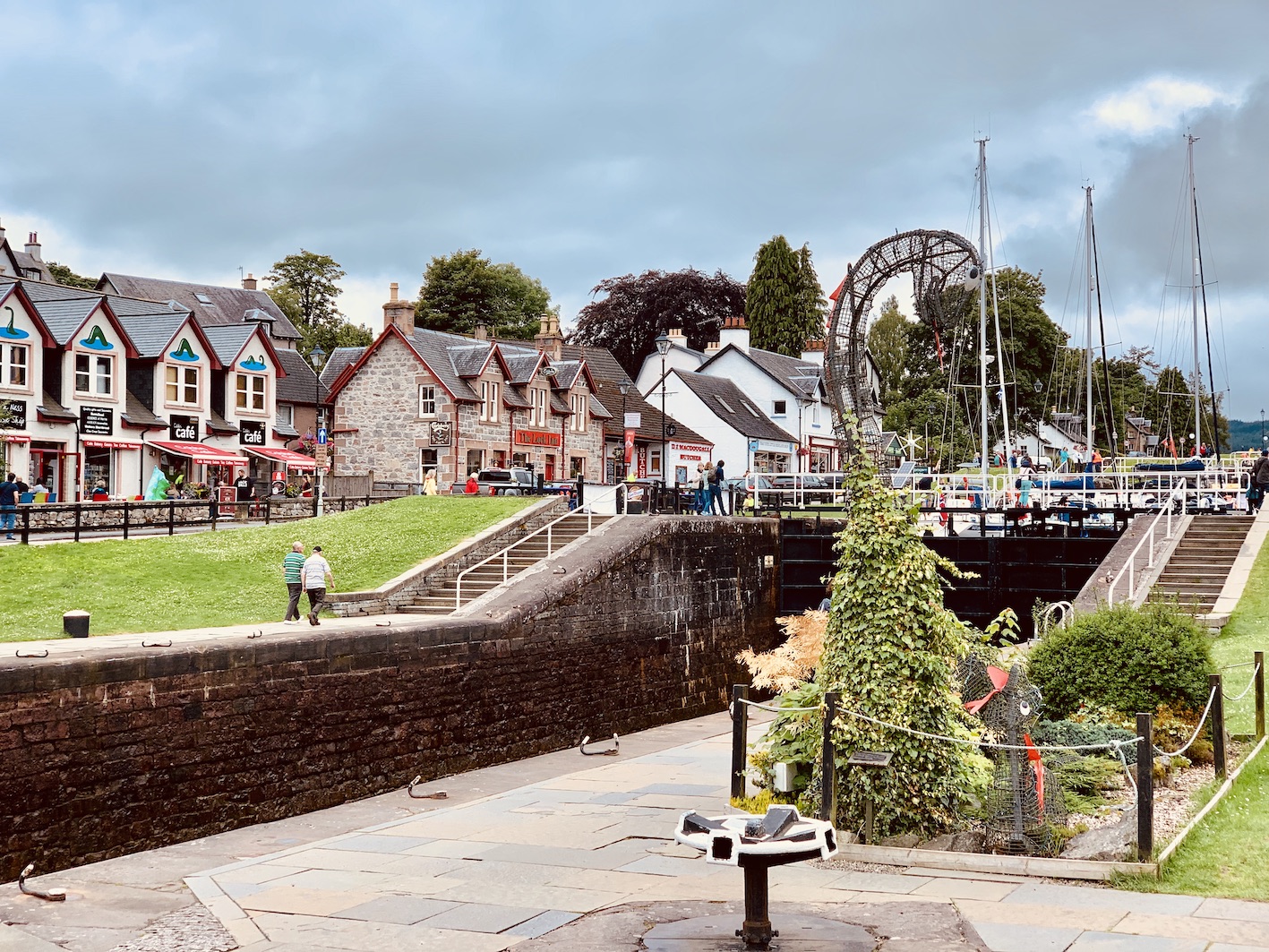 July 2019. Spackles and I had been looking forward to an hour’s stroll around picturesque Fort Augustus. We were on our way to the nearby village of Drumnadrochit and figured this would be a great place for some breakfast and a nosey. Bisected by a charming section of the Caledonian Canal and perched on the southernmost tip of Loch Ness, this tiny village of just 650 residents is exceptionally pretty. 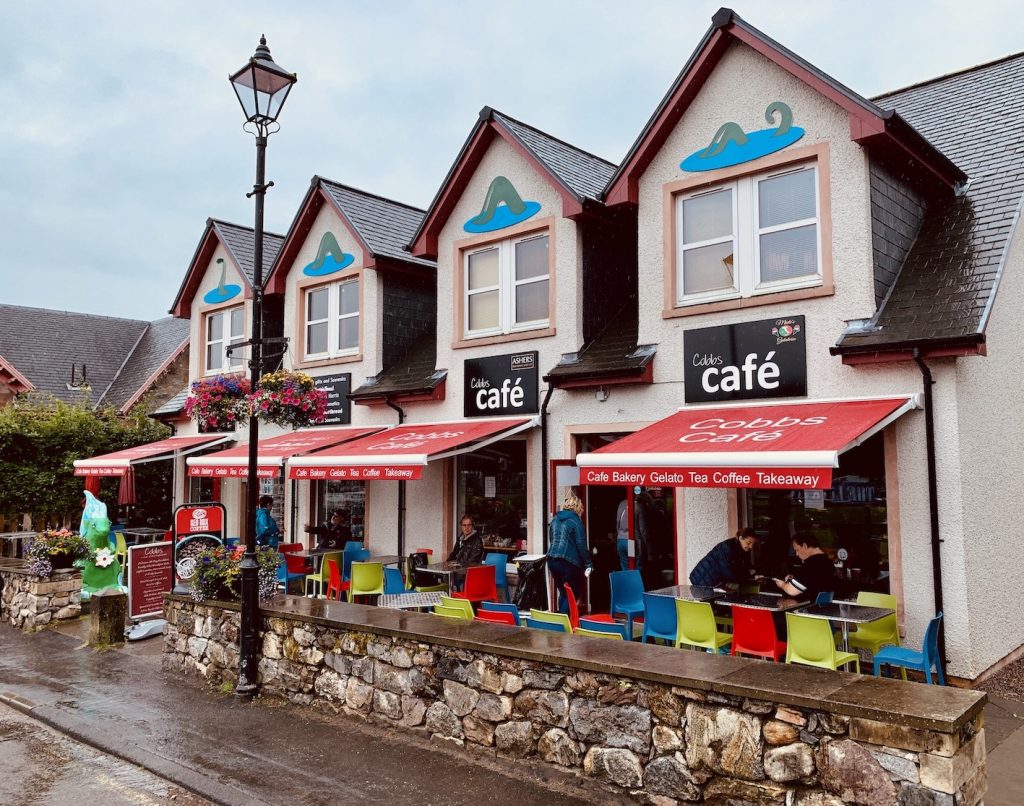 If only it hadn’t been pouring with rain. But hey this is Scotland, where soggy greyness is par for the course. Hence we parked, pulled our hoods up and scampered off to the promised land of Cobbs Cafe on the canal. 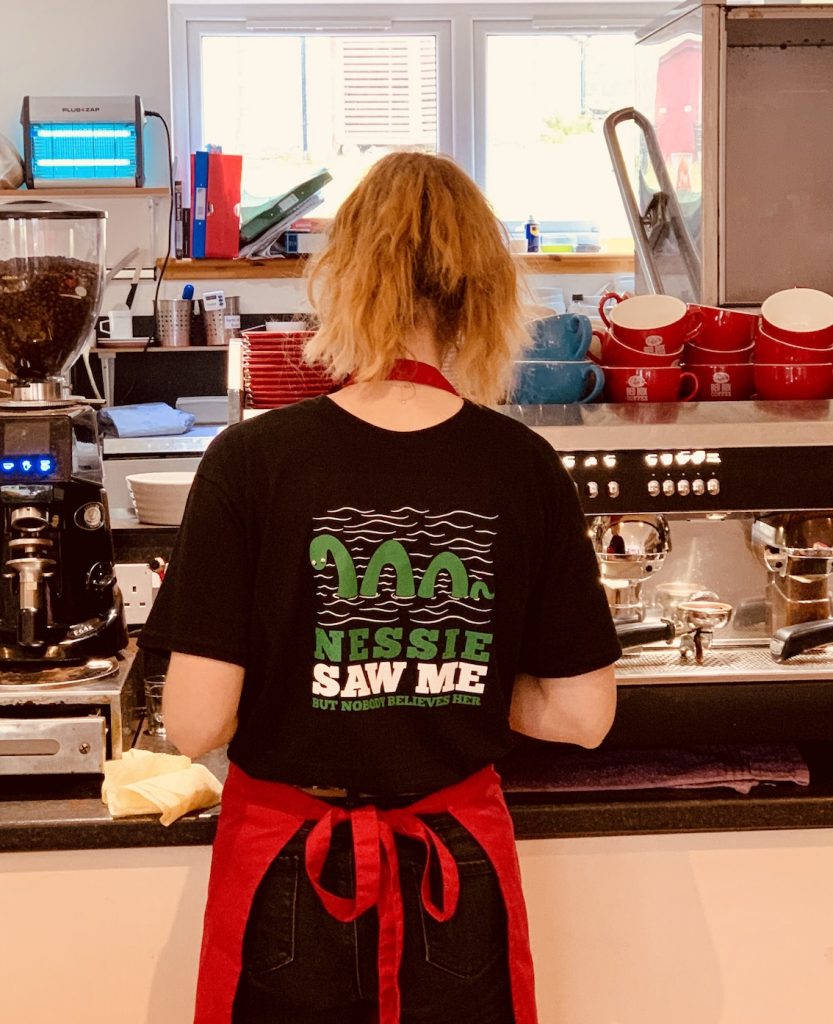 Cobbs was pretty busy that morning, what with the rain and all. In fact, Spackles and I did well to work our way between the tables of munching tourists and squeeze into a corner spot. The air was pungent with the smell of coffee, bacon, eggs and a whole host of other delights. A young girl with a Nessie Saw Me But Nobody Believed Her t-shirt took our order, which made me smile. 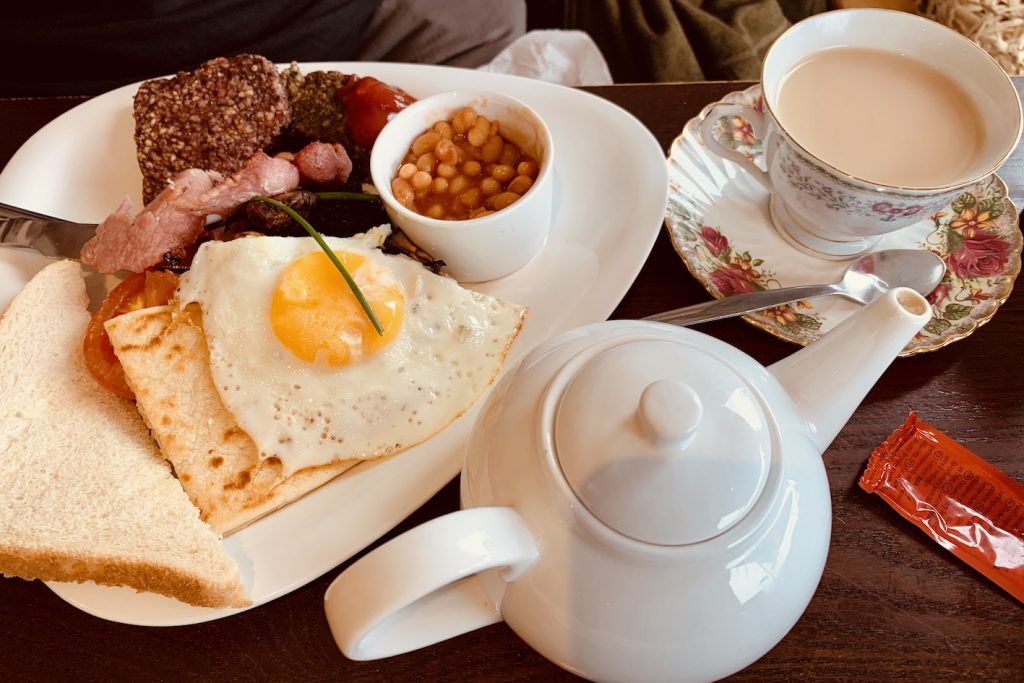 I really liked Cobbs. The staff were both friendly and efficient, plus there were splattered window views of the canal from our table. Surveying the menu, Spackles went for the Traditional Scottish Breakfast. 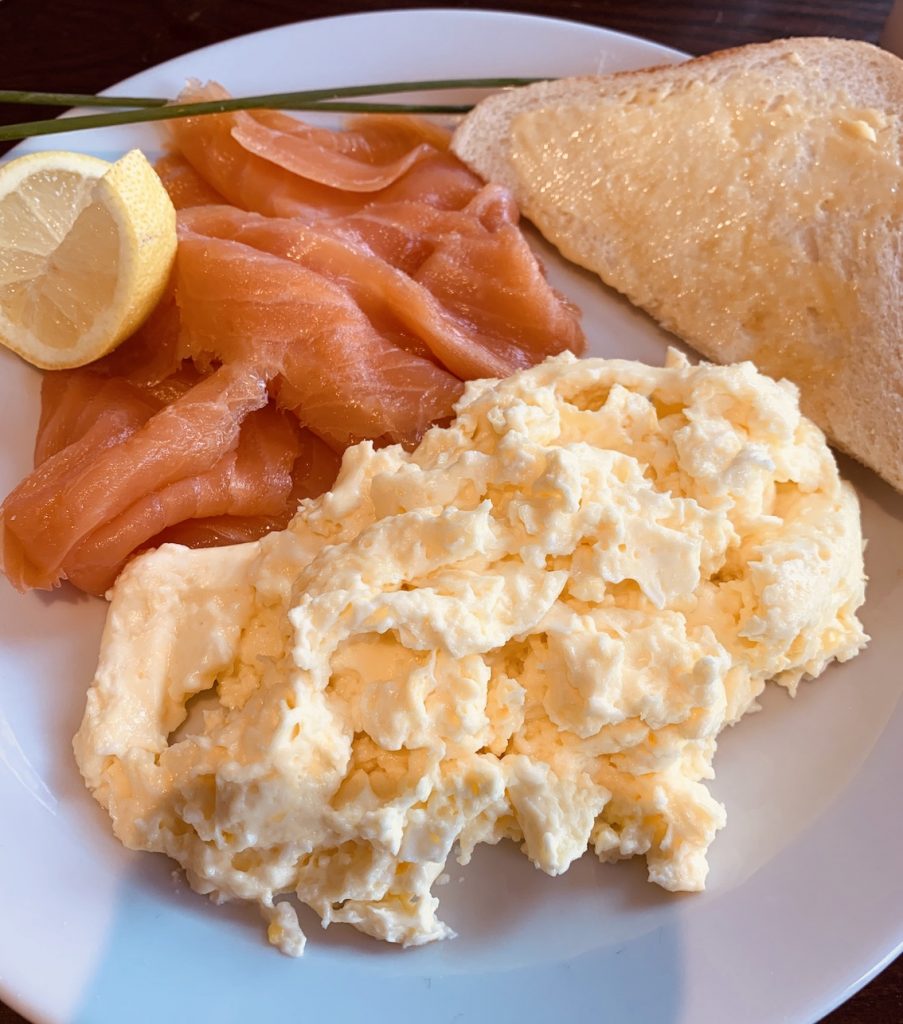 Moreover, I opted for the smoked salmon with scrambled eggs. I was not disappointed. Long after we’d both finished it was still raining, thus we ordered an extra round of coffees and a slice of cherry crumble. Simply because we felt so damn comfortable. 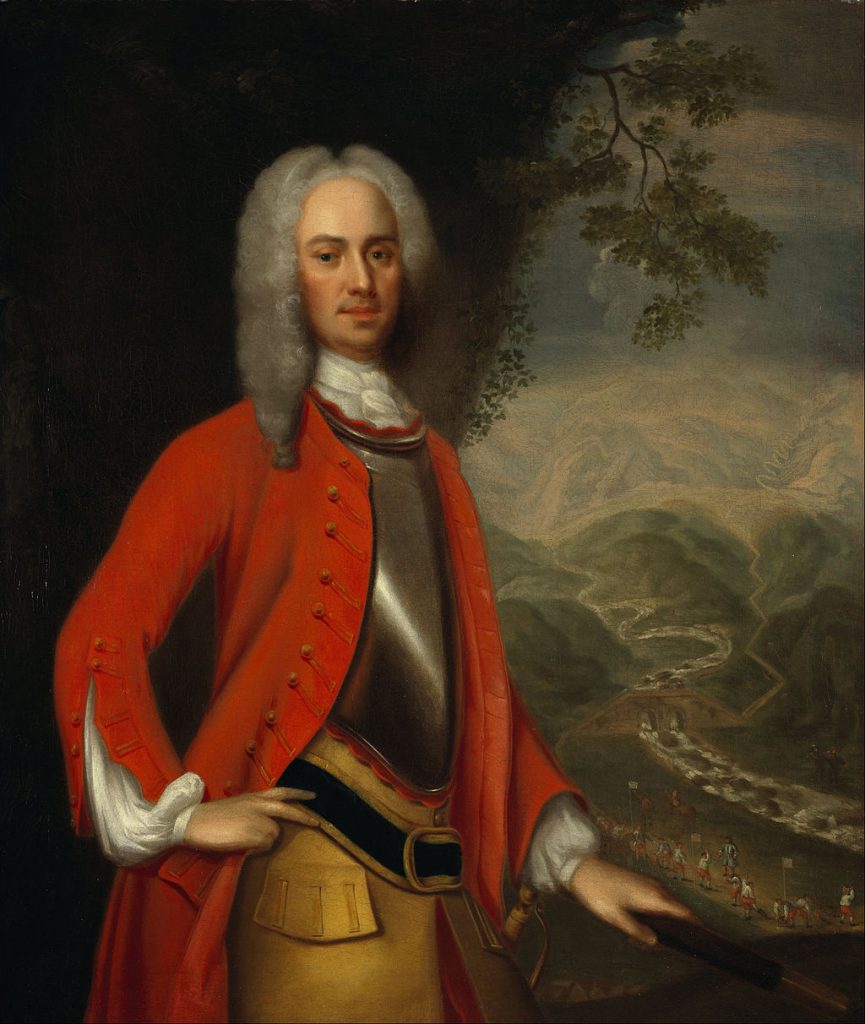 At long last the rain stopped and we got to head out into the misty morning. For such a small place, Fort Augustus certainly has some history to it. A community here dates back to ancient times, although it didn’t get its current name until the construction of a fort in the 1730s. Field Marshal George Wade built the thing and named it after Prince William Augustus, Duke of Cumberland. Wade also employed the village as the headquarters of his Scottish road-building operations. Sadly, nothing remains of the original fort. 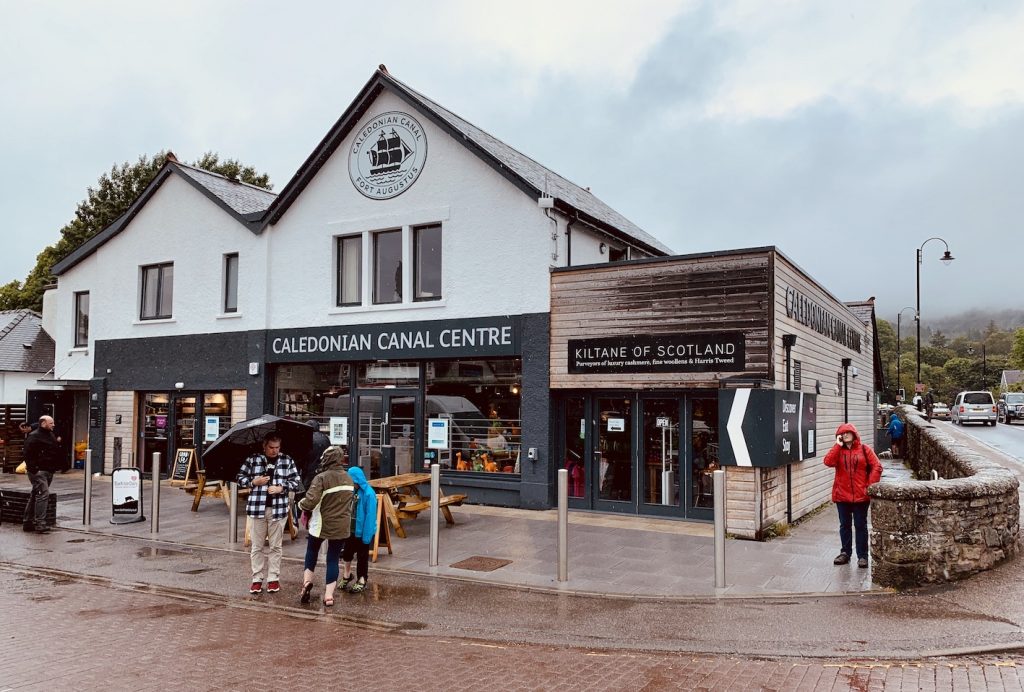 Thankfully, we got to see the handsome section of Thomas Telford’s stupendous Caledonian Canal in all its glory as it passes through the village connecting Fort William to Inverness. This was my second sighting of Telford’s dramatic locks after the very cool Neptune’s Staircase in Banavie. For those wanting to learn more about the Canal’s history, just dip into the informative Caledonian Canal Centre. 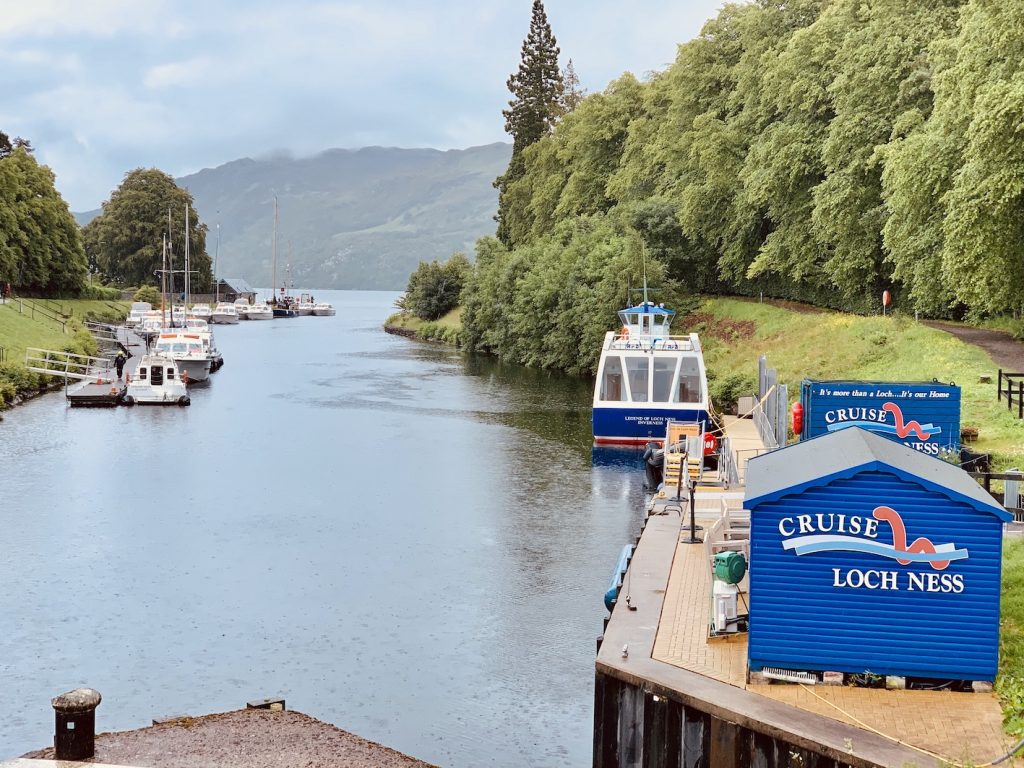 Eventually, the canal steps down into Loch Ness itself! From here, you can go on a search for Nessie through Cruise Loch Ness. It’s possible to book online, or simply head on down to their blue sheds on the day. 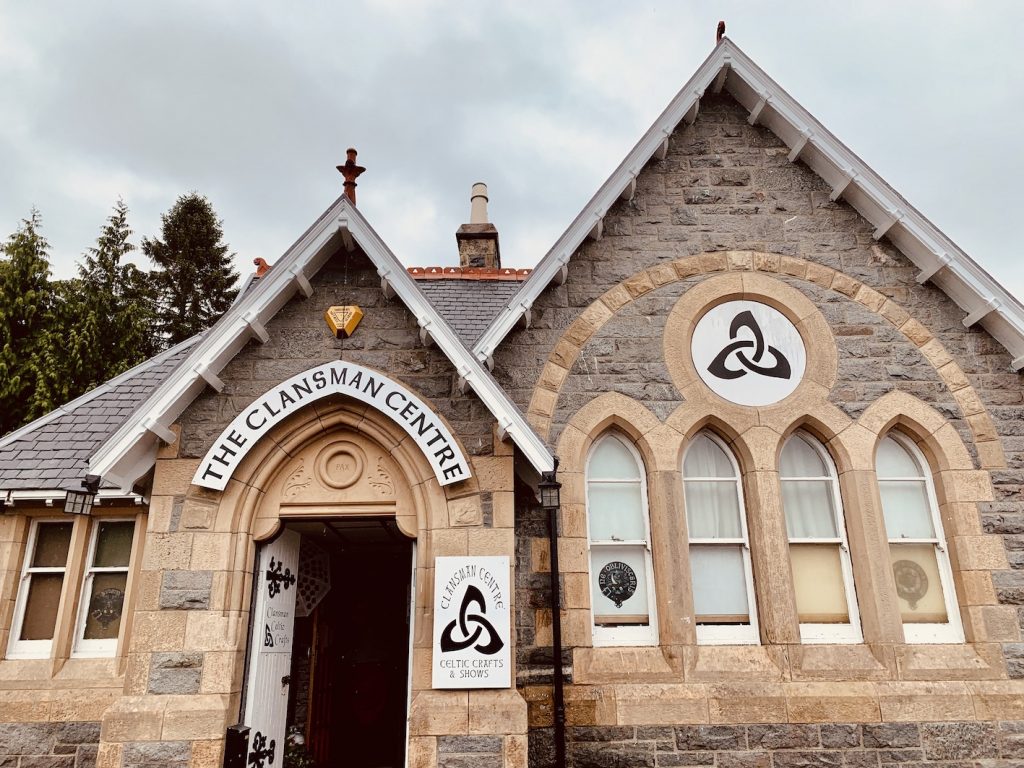 Before or after your cruise, do pop your head into the nearby Clansman Centre, an amazing recreation of a traditional 17th century Highland turf house. Inside, you’ll be greeted by an authentically dressed clansman, who’ll talk you through the customs, tools, weapons and clothes of the times. 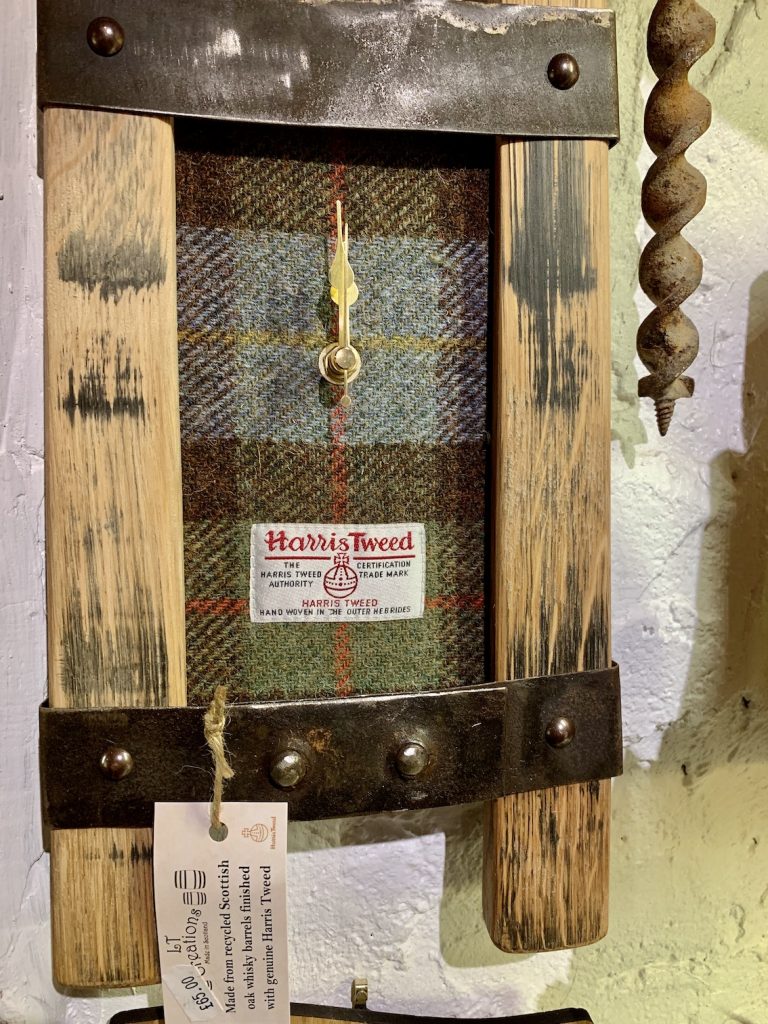 The Clansman Centre also has a cool shop, where the focus is very much on traditional Celtic crafts. American and Asian tourists go crazy for this stuff and don’t seem at all put off by the price tags. This handwoven patch of genuine Harris Tweed caught my eye, nicely framed with recycled whisky barrel panels. 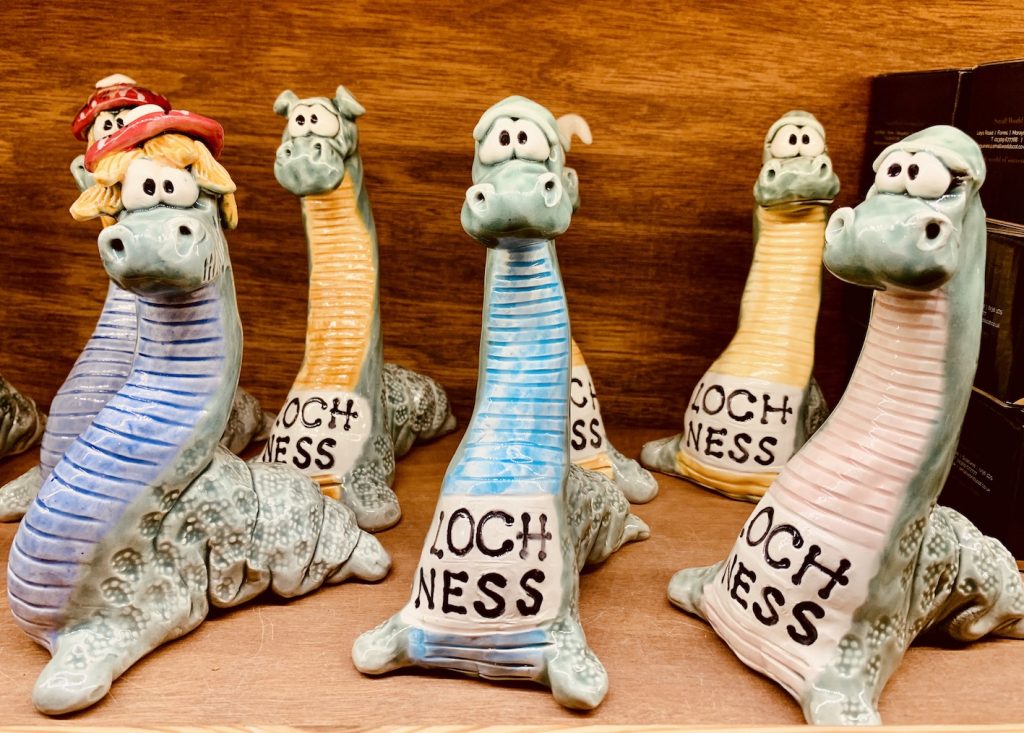 Nessie ornaments at The Clansman Centre.

Does the Harris Tweed feel a bit too fancy? Then perhaps a google-eyed Nessie ornament will have you reaching for your wallet. They didn’t have me reaching for mine but… you know… horses for courses. 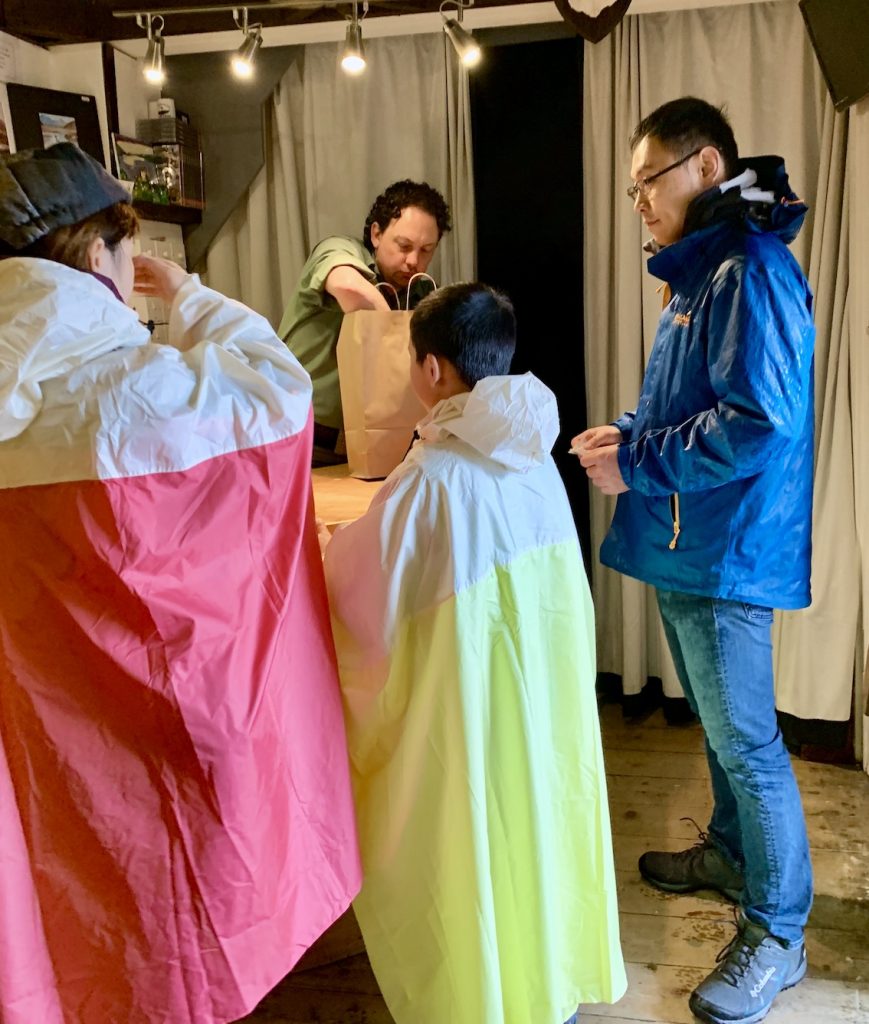 As fate would have it, I got chatting to a Chinese family from the city of Jinan in Shandong Province. Armed with bags of Clansman souvenirs (served by a kilt-wearing man of course), they were surprised to learn I’d lived in China. Then amazed to hear I’d actually spent some days in their home city back in 2009. 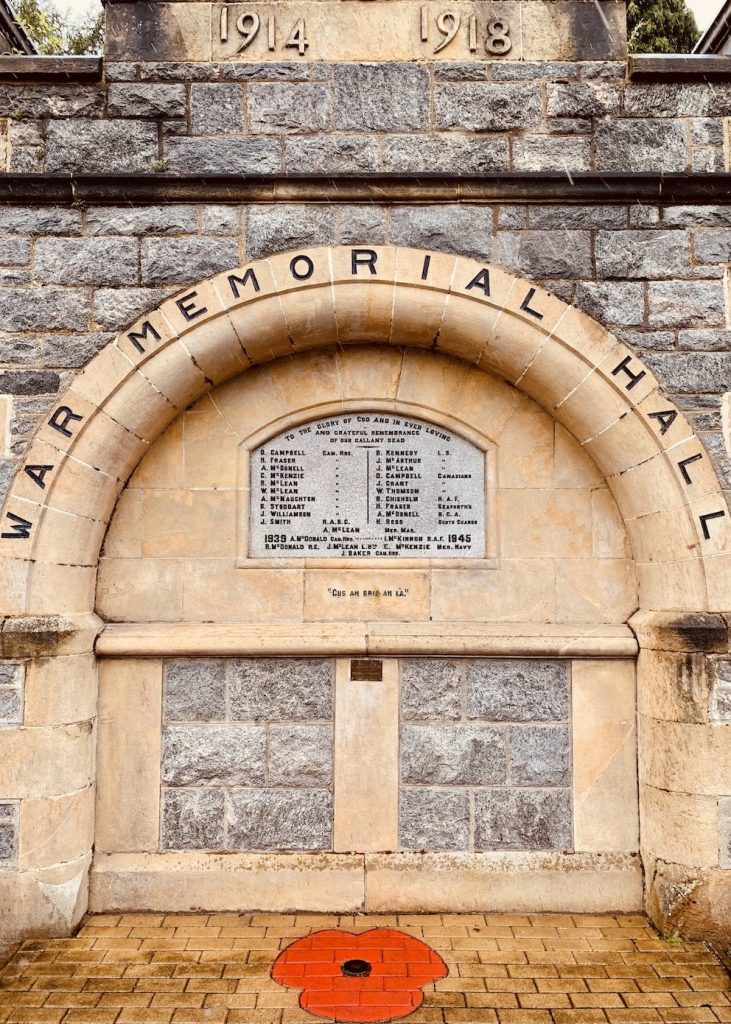 Directly opposite The Clansman Centre, just across the water, lies War Memorial Hall. Built in 1891 by the Inverness-born architect John Robertson, this public hall’s facade was transformed into the memorial we see today in 1918. It honours the local men who bravely fought and fell during The First World War. 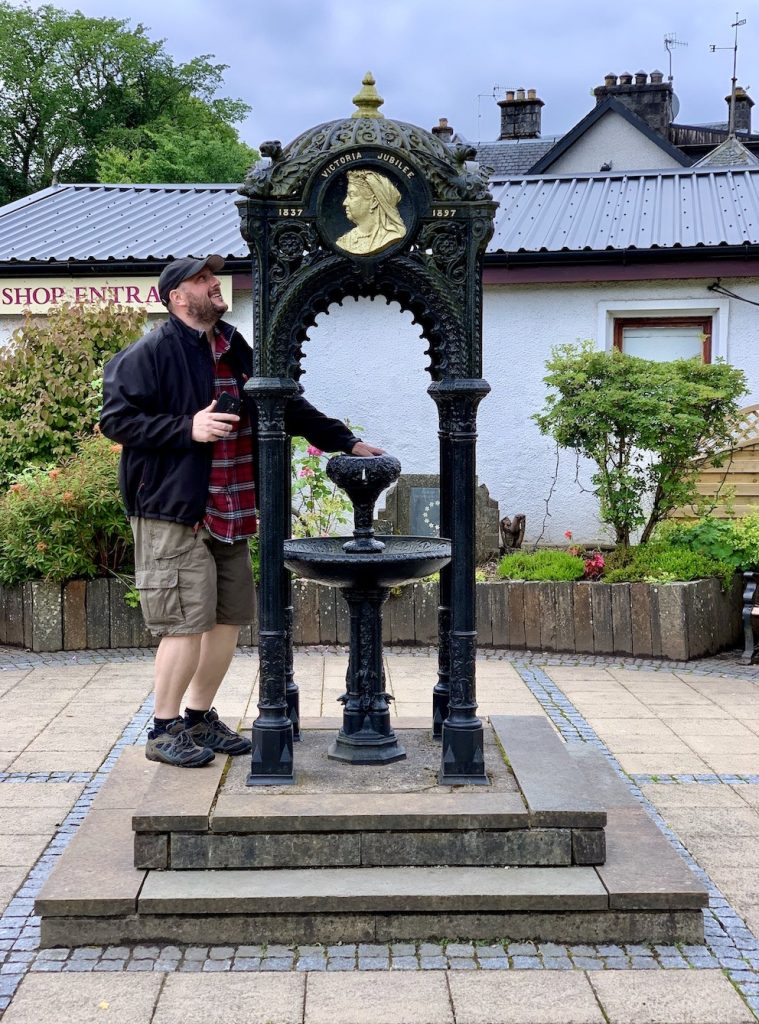 We also stumbled upon the Queen Victoria Diamond Jubilee Fountain, a cast iron drinking fountain located in a small public square called Victoria Gardens. Manufactured in Glasgow, it was brought to Fort Augustus to mark Queen Victoria’s 60th year on the throne in 1897. 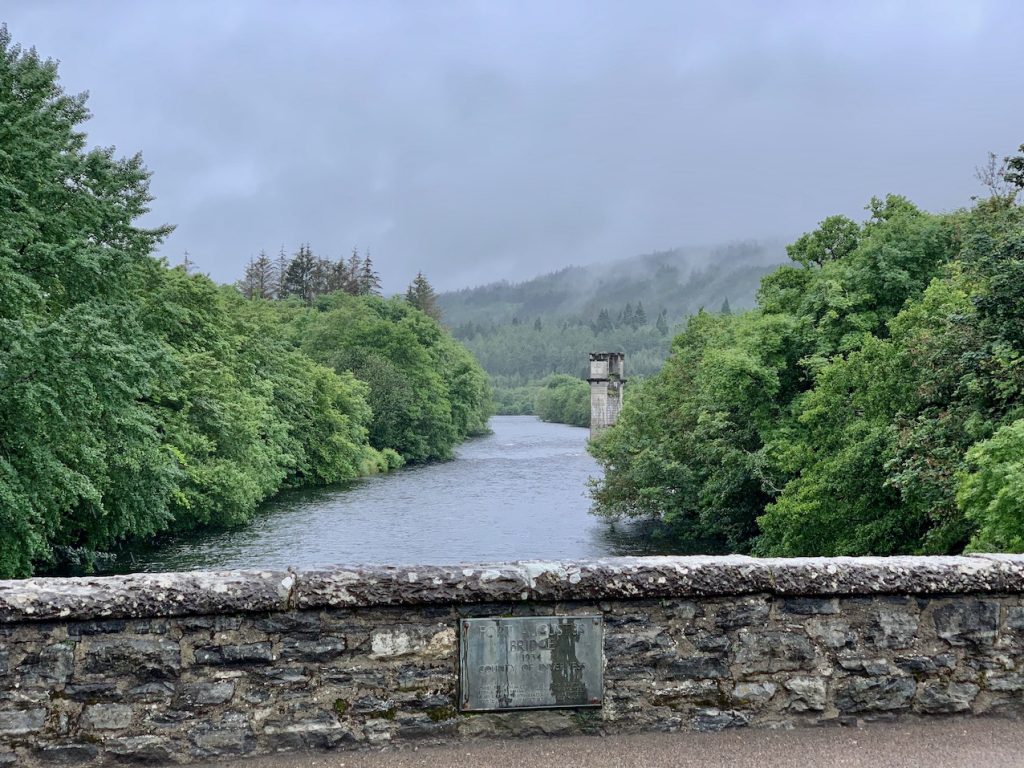 On our way out of the village that morning, we crossed the pretty Fort Augustus Bridge. Spanning a moody stretch of the River Oich, the first stone bridge here dates back to 1746. This current bridge was unveiled in 1934 as part of the area’s improved connections to Inverness and Glasgow. 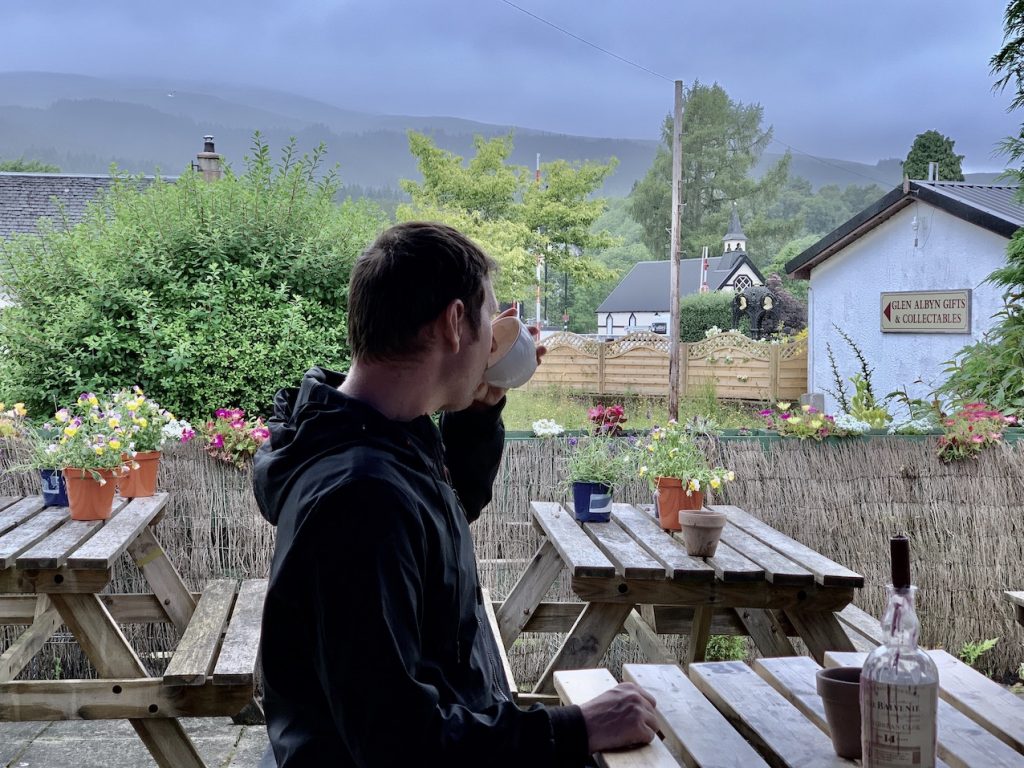 After a wonderful couple of days exploring Drumnadrochit and Urquhart Castle, it was time for Spackles and I to make the drive back to Banavie. On the way, we decided to stop by Fort Augustus one last time for some coffee and a hearty lunch. I got my caffeine fix at The Lock Inn, an old pub with a pretty beer garden that we had all to ourselves. The weather was still crap, but it made for some pleasingly mysterious views over the distant hills. 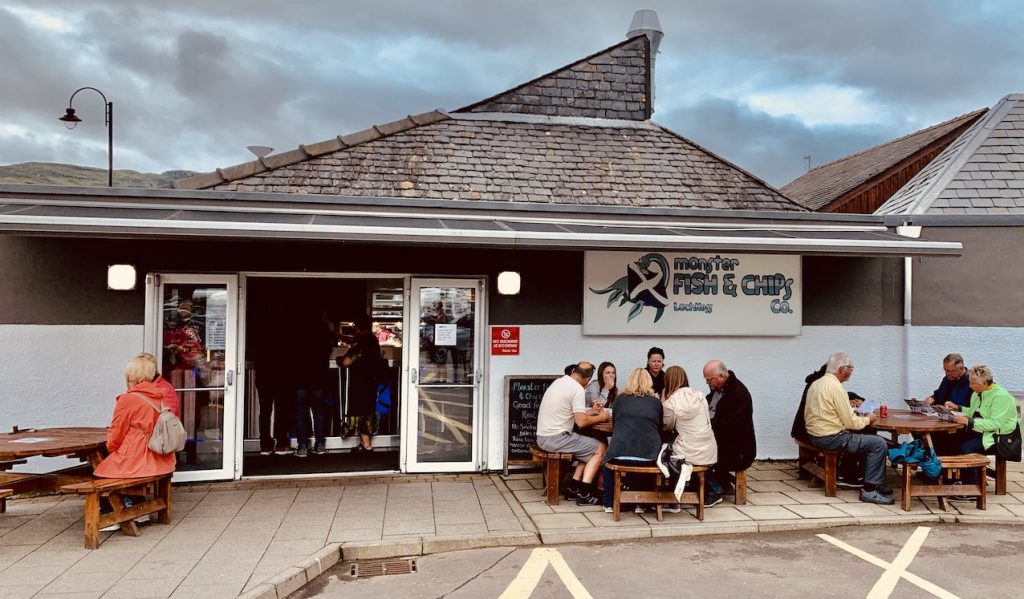 For our big feed, there really was only one choice. It had to be Monster Fish & Chips, the no-nonsense food hut unceremoniously plonked on the edge of the village’s main car park. In all honesty this place has little charm to it, especially the prickly staff who, it seems, have little time for pleasantries. Check out their TripAdvisor reviews and you’ll see what I’m talking about.

Not that Spackles and I were that bothered. We weren’t here to make friends, we just wanted a big box of dirty fish and chips. And that’s exactly what we got! It was a fine end to our brief but highly enjoyable investigations of a tiny Scottish village with a big heart!