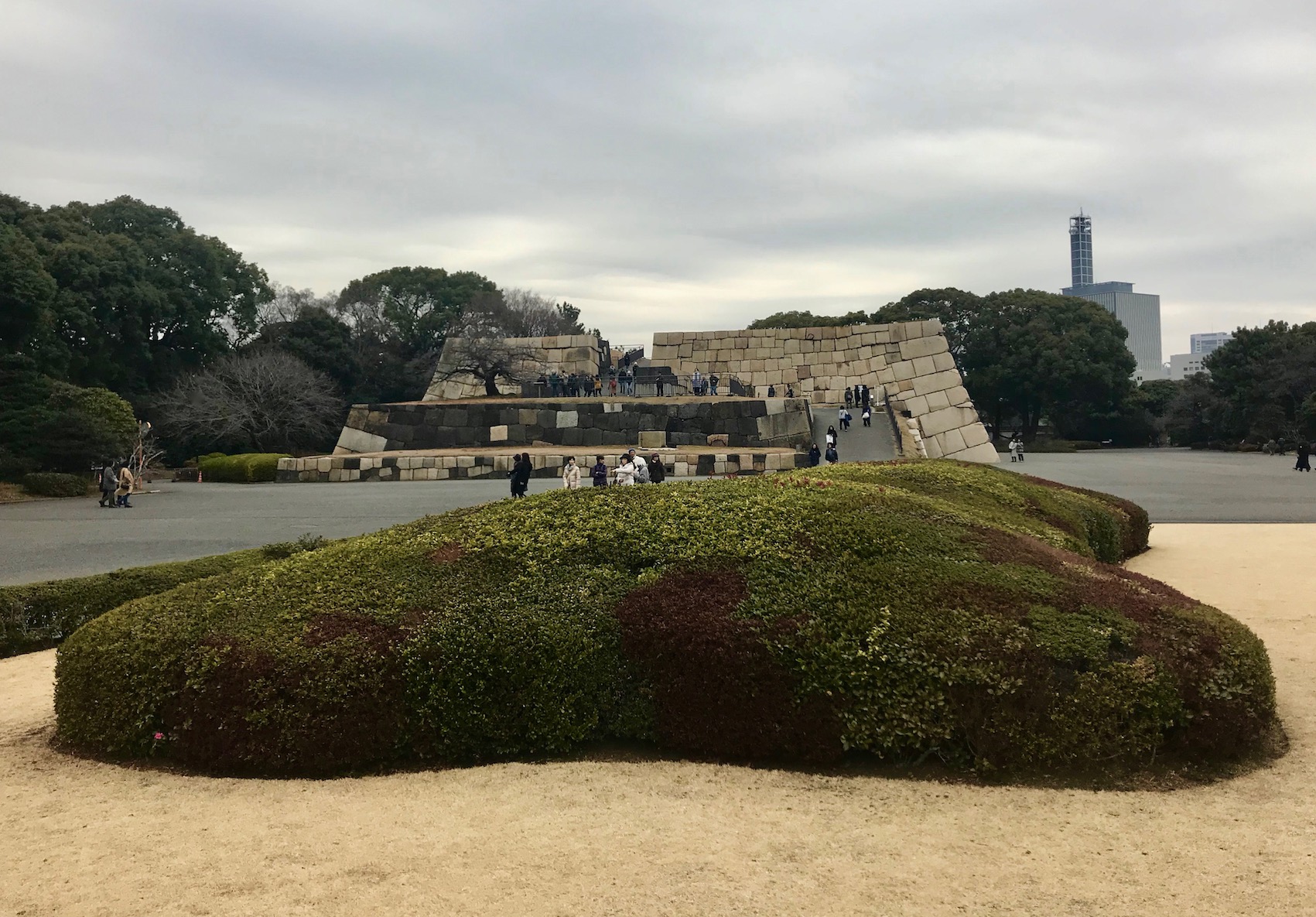 February 2019. If you really want to see Tokyo’s Imperial Palace you’re gonna have to get organized WAY ahead of time! This is still the official residence of Japan’s Imperial family so they don’t want any old Tom, Dick and Harry sauntering about. Both the palace and its inner grounds can be seen by guided appointment only and you’ll almost certainly need to book your visit months in advance. Wonderboy and I tried and failed to get tickets four weeks ahead of our trip and unlike Akasaka Palace State House there aren’t any limited daily slots. So with no choice but to accept defeat, we made do with exploring the Imperial Palace East Gardens, which are free to the general public.

February 2019. The Imperial Palace East Gardens are located adjacent to the palace and its inner grounds and on the former site of Edo Castle. The castle was where the Tokugawa Shogun lived when he ruled Japan between 1603 and 1867 and you can still see bits of those old castle walls scattered around the park.

My afternoon stroll that day was a special one because it also served as a catch up with my old buddy Rich, who I hadn’t seen in sixteen years since we shared an apartment in the Slovak capital Bratislava.

February 2019. I found the Imperial Palace East Gardens to be modest but undeniably pretty, even on an overwhelmingly grey day like this. There’s a bunch of cool little sights connected to Edo Castle, such as this guardhouse (Hyaku-nin-Bansho) used to keep watch over the castle entrance. Back in the day it could hold around 120 guards who worked in shifts to keep a 24-7 watch.

It was also cool to see the Cherry Blossom trees, which were just starting to show signs of emerging pinkness. I can imagine they must be absolutely gorgeous in the full bloom of summer.

February 2019. Elsewhere our rambling route took us past the bizarre and out-of-place Tokagakudo Concert Hall, an octagonal structure built in 1966 to celebrate the 60th birthday of Empress Kojun. I couldn’t quite decide if it was beautiful or ugly, with its flower-shaped roof and exterior decorated with mosaic birds, musical notes, the sun, moon and stars as well as pine, bamboo and plum trees. The hall is generally closed to the public, only occasionally opening for special events.

The Imperial Palace East Gardens’ biggest draw is perhaps Tenshu-dai, the base of a planned main tower for Edo Casle. Built in 1590, construction of the actual tower itself was later abandoned. Today you make the short ascent for an elevated and pleasant if not spectacular view across the lawns.

February 2019. The Imperial Palace East Gardens are open daily from 09:00-16:30 Tuesday-Saturday. Entrance is free, allow an hour or so for a leisurely walk around all the spots of interest.