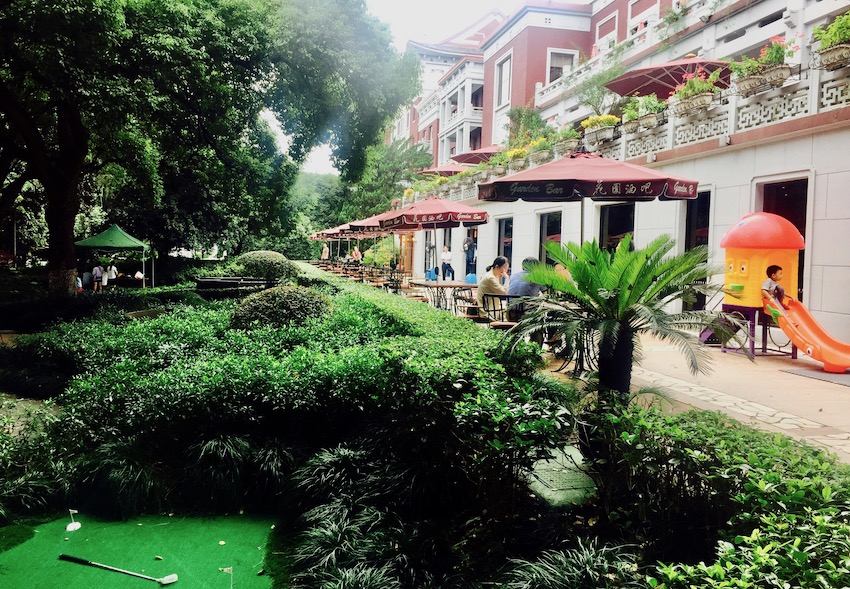 October 2017. Wonderboy and I had just finished tackling the unbridled chaos of West Lake’s Su Causeway and were in desperate need of a well-deserved time out. “Check out that fancy hotel!” I exclaimed. So we did, crossing the insanely busy Beishan Road and walking up the driveway of the opulent Shangri-La Hotel. We’d been walking the entire day, so as soon as we saw Shangri-La’s leafy café terrace I instinctively knew it was time to collapse for a bit over some overpriced drinks.

October 2017. One of many five star hotels set around West Lake, The Shangri-La offers plush rooms, an indoor pool, tennis courts and gourmet dining. It also has a charming front garden where guests can play badminton, mini crazy golf and table tennis.

Clearly a very kid-friendly establishment, Shangri-La Hotel also has a small petting enclosure featuring some of the whitest, fluffiest rabbits I’ve ever seen.

October 2017. A walk around Shangri-La’s garden wouldn’t be complete without a photo in its ridiculous flower carriage. “Oh my god!!! 10 out of 10” a friend of mine was moved to write upon seeing this shot of Shangri-La Leighton. “There is NOTHING more romantic than this!” A ring-a-ding-ding.

October 2017. It was gloriously chilled out in Shangri-La’s café terrace as we settled down for an hour’s respite. Wonderboy went for a cappuccino, while I decided on this refreshing Virgin Piña Colada mocktail. Just for kicks we asked the waitress to give us a quote for a night’s stay. Naturally the entire joint was booked out for Golden Week, but I was surprised to learn that a double room usually goes for just 870RMB (£100/$130) a night.

October 2017. After my drink I took an extended wander around the Shangri-La’s grounds. Coming upon an ascending stone path, I walked up through a wild garden until I reached a gorgeously designed fitness centre and Spa. Peeking inside the lobby, I saw that even their most basic treatment programs weighed in at more than a night’s stay at the hotel itself. Maybe next time…

Want to find out more about Hangzhou’s Shangri-La Hotel? Take a look at their website here.

For more on my time in the city, check out my other articles on Hangzhou.