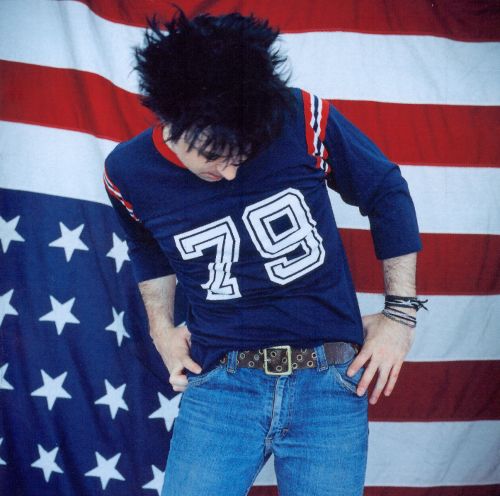 Ryan Adams is one of my favourite solo artists. A prolific songwriter and openly tortured soul, he’s virtually done it all and the guy’s still a baby at just forty three. Primarily known as an alt-country legend as the front man of Whiskeytown and The Cardinals, this is just one of Ryan’s guises as he’s equally at home as a sneering rock star, sensitive balladeer or heavy metal thrasher.

With an incredible nineteen records under his belt at the time of writing, there is much to discover in his varied canon. Unusually for me it’s his most commercial long player that resonates the most, a sixteen song opus that transformed Adams from a largely cult concern into a Grammy-nominated artist with an international audience.

The first time I saw Gold on the shelves I had no idea who Ryan Adams was, or even that the record was called Gold due to its ambiguous cover. With no title or artist name to be seen there’s merely a front-and-centre-shot of twenty seven year old Adams, his face partially hidden as he poses awkwardly in front of a giant U.S. flag

Unashamedly setting out to craft a modern American classic, he announces his intentions straight from the off with sweeping opening track New York, New York. A breezy, romantic love letter to The Big Apple (“Hell, I still love you!”), it was the right song at exactly the right time for a nation reeling from the recent 9/11 attacks.

The prevailing air of positivity seeps into Firecracker, a harmonica-laced rush of strummed guitars and throw-caution-to-the-wind exclamations of love in which Adams concedes he just wants to “maybe be your baby tonight!” It’s all pretty happy-go-lucky, even with his claim of being ready for death at any moment: “Well, everybody wants to go forever, I just want to burn up hard and bright”.

As with all Adams records though things don’t stay peachy for long. ‘‘Oh girl I wish I knew you well’’ he wails on Answering Bell, while the sorrowful La Cienega Just Smiled bemoans a misery caused by heartbreak and boozing (‘‘One breaks my body and the other breaks my soul’’), with the title character offering no solace at all with her dismissive “see you around”.

He hits rock bottom on Harder Now That It’s Over, declaring: ‘‘I wish you would’ve grabbed the gun and shot me cause I died’’. Few artists dare to be as emotionally direct as Ryan Adams and this tale of hurled drinks, bruised wrists and sleazy pawn shops is as warts-and-all as it gets.

Cleverly though the doom and gloom is spread out and elsewhere he seems content simply trying on different musical hats, such as the brooding grunge of Enemy Fire where he marks the end of a relationship with a rasping, regretful: “Baby, it’s too late! Learn how to change and maybe I could stay”. There’s also southern gospel meets R&B on Touch, Feel & Lose and foot-stomping haystack rock with Tina Toledo’s Street Walkin’ Blues, a song so in debt to Sticky Fingers era Rolling Stones (“Black limousiiiiines, money in the bank”) it must have had Keith Richards and co scrambling to check whether they’d perhaps written it themselves.

Amid these varied storms there are also touching moments of restraint on the gentle and pining Wild Flowers Grow, which tells the tale of a “poor girl, no ma, nothing much to speak of” but who Adams sees as “a rough diamond” whom he implores to “hold on, dear”. The soulful, piano-laden Rescue Blues meanwhile, with its claims of “And everybody wants to see you suffer“, has had fans debating its message for years. Personally I’ve always favored the theory that when you’re a famous addict people secretly love to see you down in the gutter because it feeds the myth and fuels the creative process of the artist they love. Only when things get desperately bad do “they throw you down a rope when you’re in trouble, baby”. And how can I not mention the brilliant When The Stars Go Blue, which became such a candle-waving standard it was eventually butchered into mediocrity by the likes of Bono and The Corrs. The line “Where do you go when you’re lonely, I’ll follow you” puts a lump in my throat every time. 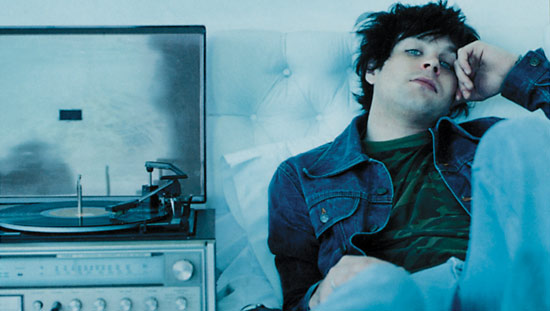 Ryan Adams: Is that a lump in your throat or are you just pleased to see me?

What surprises me the most about my love for this album is that unlike many of my favorite records I actually consider Gold to be an inherently flawed piece of work. Clocking in at over seventy minutes it’s way too long and more than a little self-indulgent (I’m looking at you Sylvia Plath!). A few songs creep dangerously close to middle-of-the-road dad-rock and stylistically he’s all over the place, with some detractors going as far to brand him a man with an identity crisis.

But for me Ryan Adams is the kind of maverick talent you rarely see anymore. He does what he pleases, trying this, having a go at that and putting it all out there whatever the result. It’s kind of The White Album approach to being an artist and there are few folk around brave these days to even try it let alone talented enough to get away with it. Ryan Adams is an artist who wears his heart and influences on his sleeve, for whom the words ‘‘quality control’’ literally mean nothing. His brilliant debut album Heartbreaker may be more concise, Jacksonville City Nights might boast a clearer musical vision and Rock n Roll undoubtedly packs more of a hipster punch. But for me it’s Gold that best showcases Ryan Adams as an ambitious yet effortless talent. A complex but accessible artist with a restless spirit. A songwriter tour de force! 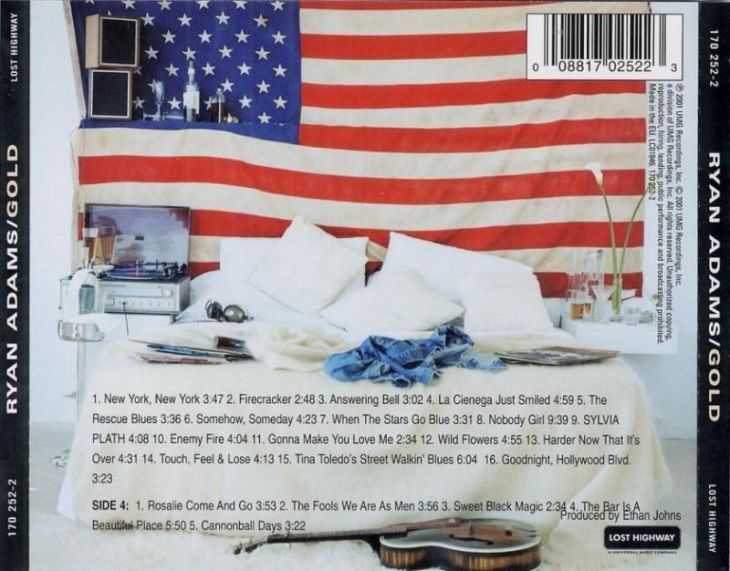 Choice Lyric: ‘‘I was trying to make you angry but I didn’t feed you to the cops. When I threw that drink in that guy’s face it was just to piss you off’’. – From Harder Now That it’s Over.