Album review: Attack of the Grey Lantern by Mansun (1997). 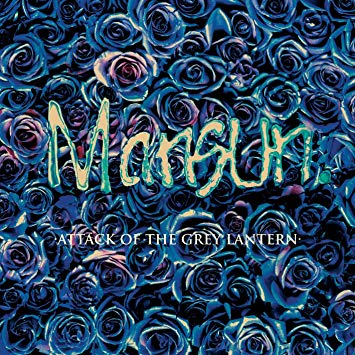 This amazing debut album blew me away from the moment I first heard it. It’s a bewildering hotpot of musical styles that shouldn’t really work but somehow come together in a glorious, messy triumph. Offering a peephole into an otherworldly English village, Attack of The Grey Lantern follows the lives of its eccentric and highly dysfunctional inhabitants. There’s Penelope Cheapskate, Fatima Toothpaste, Egg Shaped Fred, Albert Taxloss and Dark Mavis, not to mention a nameless vicar with an addiction to cross-dressing and stripping (‘‘And he’s dressing like his daughter, while he’s making wine from water”).

It´s all a bit bonkers, like some adult Alice In Wonderland type affair set to music. I remember it being so out of step with everything else that was going on with Britpop at the time, a record that grabbed me by the shoulders, shook me around for a bit and left me gasping for air and wanting more. Perhaps even more curious is that Attack Of The Grey Lantern can’t really be called a concept album. Frontman Paul Draper, as if losing interest in his own narrative, regularly abandons his characters throughout in favour of more straightforward anthems like She Makes My Nose Bleed and Wide Open Space.

Nevertheless it’s utterly exhilarating. There are crashing guitars, spectral synths, sweeping orchestration, clanging church bells and improbable cow moos. All carried along by Draper´s acquired-taste-vocals, with venomous sneering on The Chad Who Loved Me (‘‘It all comes crashing down!”), soft, heartbroken longing in You, Who Do You Hate? (‘‘If I ever loved again, I wish it could be you”) and air-punching jubilance with Wide Open Space (‘‘The roof comes in and crashes in a daze!”).

There’s a touch of Mozart here, Beatlesy melodies there, little explosions of grunge, straight-up rock n’ roll, injections of catchy pop and a playful nod to Little Jimmy Osmond (‘‘He’ll be your tax loss lover from Liverpool…’’). Highly influenced by the British comedy acts Monty Python and The Goons, Mansun never quite take their tongues out of their collective cheeks. And yet musically, lyrically and thematically their ambition is undeniable.

Released in June 1997, Attack of the Grey Lantern received widespread critical acclaim, hitting number 1 in the UK album charts. But somehow, much like the band themselves, today it exists merely as a dusty antique, a forgotten artefact of a bygone era. I was lucky enough to see them play live once. It was at The Glasgow QMU and it must have been the autumn of 2000 as they were touring their ill-fated third album Little Kix. They were in fine form that night in front of a devoted audience and I had no idea that they would never finish another record. If you’ve never heard of Mansun, and many haven’t, then I can only proclaim immense jealousy because I’d love to reclaim that feeling of giving AOTGL a spin for the first time and marveling at the audacity of it all.

Choice Lyric: ‘‘If you should see me passing by, do not disturb me as I fly. Though I am walking here, this is where I’ll be’’ – Dark Mavis.

For more on Mansun, check out my live review of Paul Draper at Yuyintang Park Shanghai (2019).