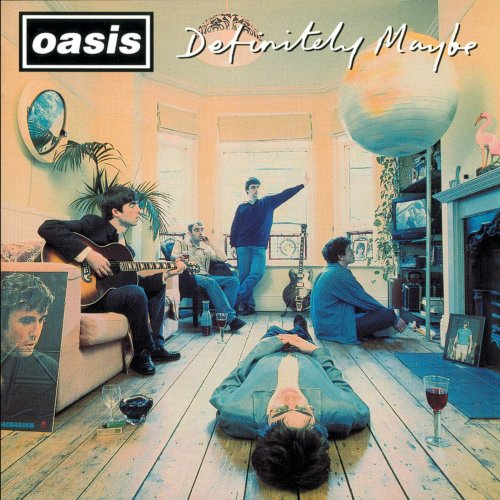 It’s easy to forget what an unparalleled tour de force Oasis were when they burst onto the scene in the summer of 1994. Dangerously cool, razor-edge witty and a whole new level of arrogant, they were impossible to ignore, the musical equivalent of Jack Nicholson smashing the door down with his axe in The Shining.

I was sixteen years old when their debut album Definitely Maybe hit the shelves and the impact it had on me was immeasurable. On the one hand it’s a record brazenly in debt to its influences, which ranged from T-Rex, The Rolling Stones and The Kinks to The Sex Pistols, The Jam and The Stone Roses. There’s even a tip of the hat to Gary Glitter at a time when the man was yet to be declared persona non grata. And while their self-fuelled comparisons with The Beatles remained inescapable, the truth was Oasis sounded nothing like The Fab Four, while as an LP Definitely Maybe was much more than some heady nostalgia trip.

Unapologetically in your face, opener Rock ‘n’ Roll Star sets the tone with its barbed-wire guitar riffs. A snarling anthem condemning life in dead-end-town Britain, Liam’s vocals sound like something from another planet as he dreams of escaping the ‘‘citeeeeeey’’ for some time in the ‘‘sun-shee-iiiine’’. By the end of its five minutes and thirty-two seconds it felt like I’d personally witnessed the birth of a rock star, a brand new hybrid unlike anyone I’d ever heard. ‘‘You’re all in my hands tonight!’’ sneers Liam in the closing sequence, his delivery so convincing I could only nod along in a kind of stunned agreement.

Having grabbed the listener by the balls, there follows a somewhat odd deceleration via the hallucinogenic blues-rock of Shakermaker. A largely nonsensical affair that blatantly rips off The New Seekers’ I’d Like to Teach the World to Sing, its crunching guitars and rousing melodies create just enough swagger to save it from disappearing up its own ass. But while seemingly vacuous when observed as a lyrical whole, there are actually solid cultural references abound. A much loved 1970’s Trebor Soft Mints commercial featuring Steve Harley & Cockney Rebel gets a mention, as does the children’s animated TV series Mr. Benn. Noel also pays tribute to the owner of Manchester’s legendary shop Sifter’s Records, a man who ‘‘sold me songs when I was just sixteen’’. All the while these unrelated fragments are knotted together by Liam’s drawl to ‘‘shake along with me’’. Oh, go on then. 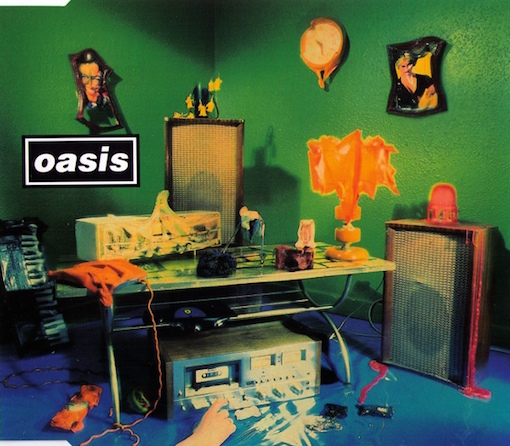 “Maybe… I don’t really wanna know… how you’re your garden grows… cause I just wanna fly’’ goes the opening line to Live Forever, a forcibly uplifting power ballad that revisits the idea of escaping the mundane and aiming for the stars. It was also Noel’s answer to the self-loathing negativity of American grunge, particularly Nirvana and their front man Kurt Cobain who’d recently committed suicide. ‘‘I wanna live, I don’t wanna die’’ announces Liam on what would become Britpop’s definitive anthem of hope. 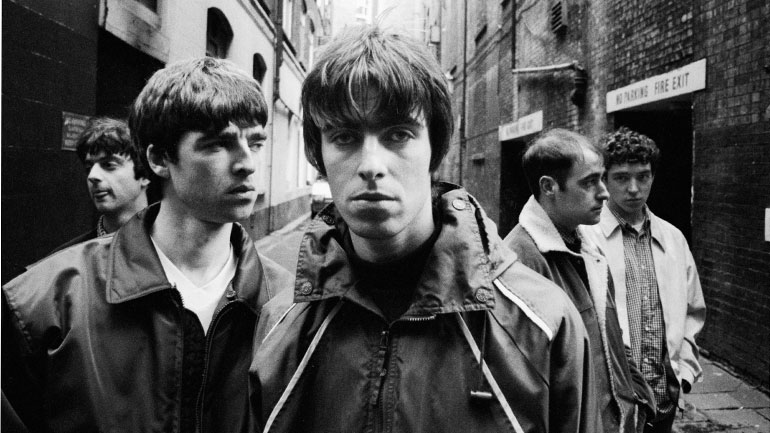 There’s an equally positive energy to the happy-go-lucky Up in the Sky, where a quick-fire rhyming of ‘‘sky’’ ‘‘fly’’ and ‘‘high’’ gives it the feel of a jolly, rock n’ roll nursery rhyme. But again there’s more than meets the eye, with Noel slamming politicians for being disconnected from the realities of life in working class England. ‘‘Hey you, up in a tree!’’ barks Liam, ‘‘wearing the crown’’, ‘‘stealing the light’’.

If Up in the Sky is a bit lite for some, there’s more than enough compensation on the dense and dirty Columbia, a swirling hotpot of grinding guitars, screeching feedback and Tony McCarroll’s thumping drums. Named after a hotel in which the band apparently embarked on an all-consuming acid trip, the entire track reeks of sweat, nausea, dilated pupils and body tremors. ‘‘All this confusion, nothing’s the same to me’’ growls Liam, while the song’s most honest line abandons all attempts to articulate the sensation: ‘‘I can’t tell you the way I feel, because the way I feel is oh so new to me’’.

Themes of self-belief and optimism meanwhile continue on the cocksure Supersonic, an intentionally vague number where this time Noel’s mumbo jumbo lyrics offer little depth. Believed to have been written in a mere ten minutes, ‘‘Supersonic’’ rhymes with ‘‘gin and tonic’’, ‘‘doctor’’ with “helicopter’’ and ‘‘tissue’’ with…‘‘issue’’. There’s even a line where Liam belts out: ‘‘No one’s gonna tell you what I’m on about’’. Ultimately, with strutting rock this sexy, we don’t need to know.

Next up comes the unbridled ferocity of Bring It on Down, a paranoid commentary on council estate Manchester that is so blistering it virtually borders on heavy metal. ‘‘You’re the outcast, you’re the underclass, but you don’t care because you’re living fast!’’ screams Liam, his distorted vocals only just fighting their way through the wall of noise. 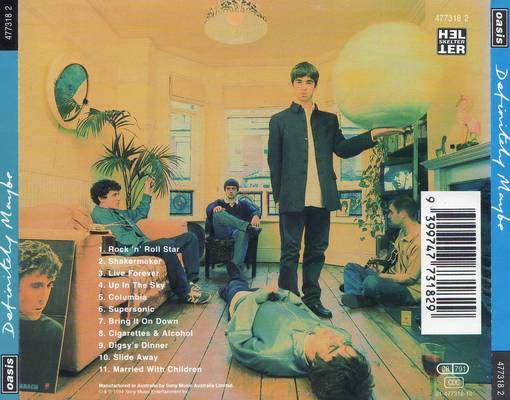 Arguably pop culture’s most notorious cat burglar, Gallagher senior has always been open about his penchant for borrowing, lifting and downright stealing lyrics and riffs. There’s perhaps no more blatant example of this than the opening to Cigarettes & Alcohol, a note for note reproduction of T-Rex’s Get It On. A joyous ode to hedonism, it’s a tale that has our heroes on a night out ‘‘looking for some actiiiiooon’’, but in the end settling for a combo of fags, booze and drugs. The song also finds Liam at his very best, his trademark vocals soaring on ‘‘imagi-na-tioooooooon’’ and ‘‘aggra-vaaa-tiiiooon’’.

On an album stuffed with some of the most essential music they’d ever record, poor old Digsy’s Dinner feels more than a bit throwaway, a track that could and should have been substituted for any one of their brilliant B-sides. A silly tribute to the asinine ramblings of Noel’s musician friend Peter ‘Digsy’ Dreary, it’s a twee, toe-tapping affair in which boy dreams of inviting girl over to his place for some tasty lasagna.

Fortunately it’s followed by the indispensable Slide Away, a passionate love song featuring some of Noel’s most heartfelt lyrics ‘‘I dream of you and all the things you say, I wonder where you are now’’. A commentary on his stormy relationship with long-term girlfriend Louise Jones, Liam’s delivery is pure tenderness, early proof that as a singer he had great range and wasn’t all cock and balls.

Closing track Married With Children is also about Jones, but this time it’s a playfully vitriolic ditty that speaks of the petty frustrations that come from flat sharing. ‘‘I hate the books you read and all your friends’’ deadpans Liam, while the amusing hook ‘‘your music’s shite, it keeps me up all night’’ details Jones’ exasperation with her boyfriend’s rock star dreams. But with their breakup coming just a few months before Definitely Maybe’s game-changing release, you can’t help but conclude that the joke was on her. ‘‘Goodbye I’m going home’’ goes the record’s final line and it’s a beautifully understated end to one of the greatest albums in British rock history.

What came next of course was much more seismic in terms of impact. Their second album (What’s The Story) Morning Glory? was a gargantuan record with grand string arrangements, big choruses and massive hit singles. There were record-breaking sales, music industry awards and cocktails at Downing Street. Not to mention their two-night, box-office smashing live stint at Knebworth, an event for which I was lucky enough to get a ticket.

But while Morning Glory remains a great album, for me you can’t beat the rawness of Definitely Maybe. Never before or indeed since has a British rock band displayed so much confidence, exhibited such unparalleled bravado. Listening back to it now and it feels like a time capsule record made by a band who would never again feel so dangerous, so punk, so blissfully unaware of their own limitations. It’s the sound of a group that had nothing to lose, a collection of songs that would never be bettered during Oasis’ eighteen-year existence.

Choice Quote: “I’ve pretty much summed up everything I wanted to say in Rock ‘n’ Roll Star, Live Forever and Cigarettes & Alcohol. After that I’m repeating myself, but in a different way” – Noel Gallagher.

Choice Lyric: “Hold me down, all the world’s asleep, I need you now, you’ve knocked me off my feet. I dream of you, we talk of growing old…’’ – From Slide Away.

Like this? Take your pick from a multitude of records inspired by Definitely Maybe era Oasis. Just a few worth recommending are the self-titled debut albums by Leicester rockers Kasabian (2004) and singer-songwriter Jake Bugg (2012).