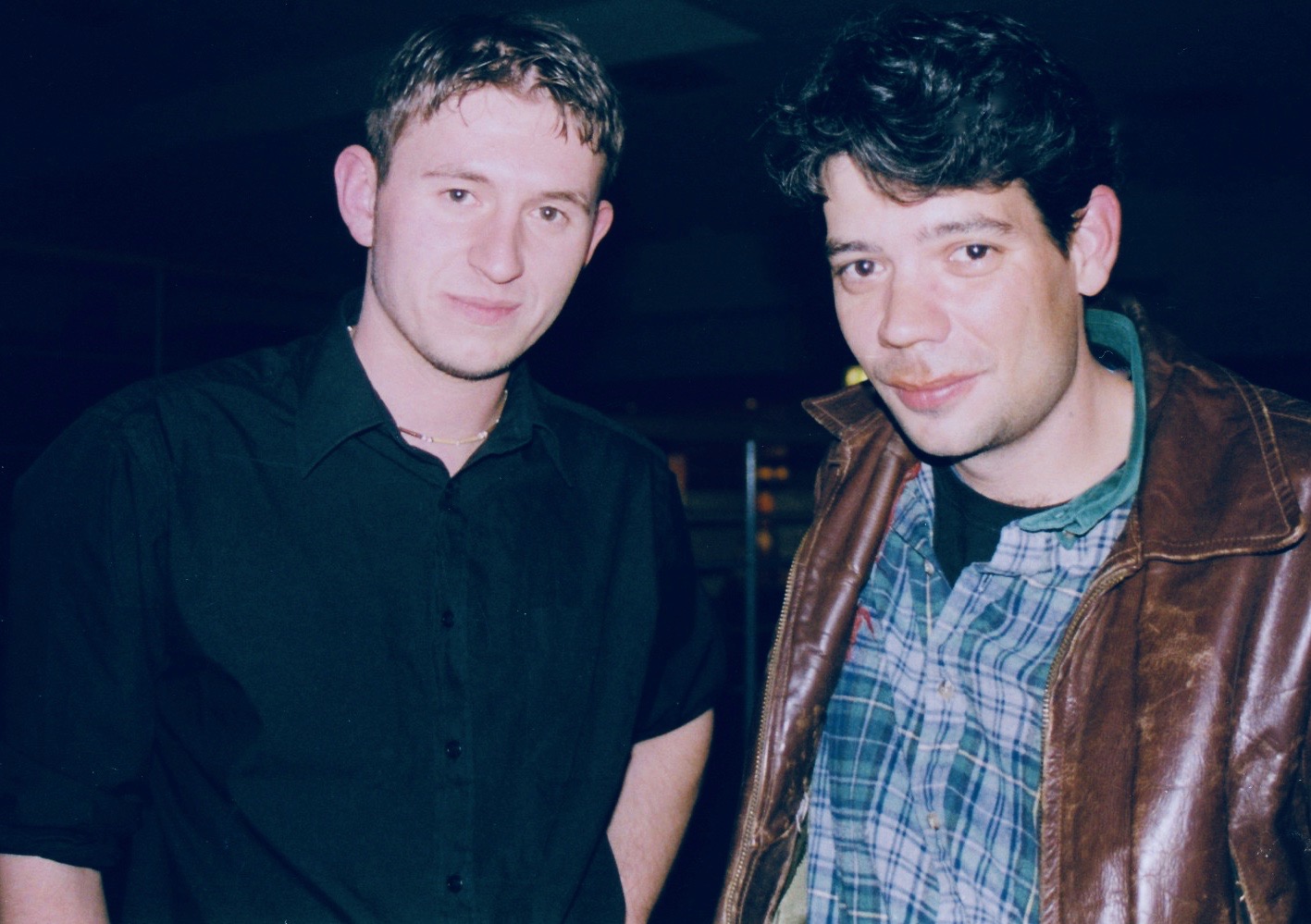 ‘‘Why is this place empty? Shouldn’t there be people here?’’ asked Caroline, looking genuinely confused.

‘‘You get more of a crowd down at my local amateur team back home’’ added Irish Mike.

It was a cool October evening and a bunch of us had taken a trip to Štadión Pasienky to see a football match between ŠK Slovan Bratislava and Košice. Nestled among a half-hearted scattering of home fans, we sat looking out across the remaining three sides of the stadium, which were virtually deserted.

Thankfully, the flourishing camaraderie between us more than made up for the lack of on-pitch entertainment. Just weeks into my Bratislava experience and it was already clear that fate had thrown together a really special bunch of people. 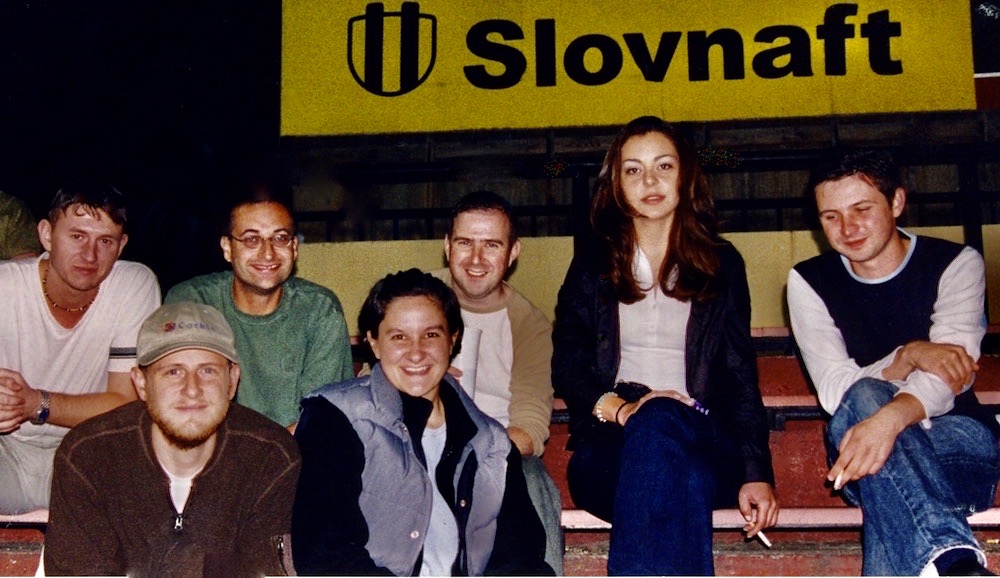 Every evening there was something to see and do, with a revolving lineup of expat teachers. There were weekly quiz nights at The Slovak Pub and visits to Zimny Stadium to see Bratislava’s ice hockey team. Fridays were set aside for karaoke at the old town’s main Irish Pub, The Dubliner. 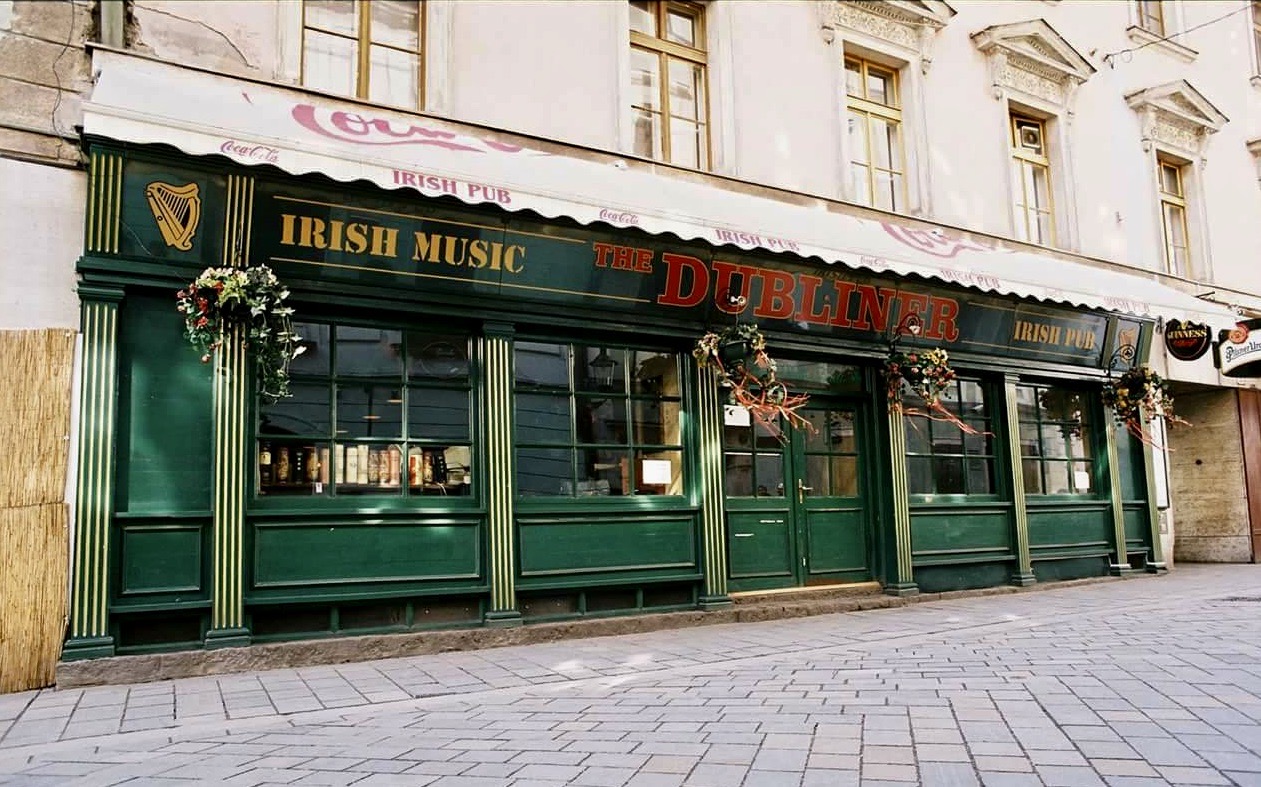 Bored by the endless parade of narcissists doing Robbie Williams’ Angels, one night Rich and I got up and belted out Don’t Let Me Down by The Beatles. Against all the odds it was a smash hit! Not because we were great singers (we were not), but rather due to our tongue-in-cheek delivery. In fact, I think people just appreciated the fact that we didn’t take ourselves seriously.

‘‘Now THAT’S karaoke!’’ announced an inebriated local, slapping me on the back as we left the stage. ‘‘Faaantastic!’’ exclaimed Rich. So enriching was that first experience, we went on to perform the song countless times. No matter how much of a crappy day I’d had, I could always cheer myself up with the thought of Don’t Let Me Down Friday. 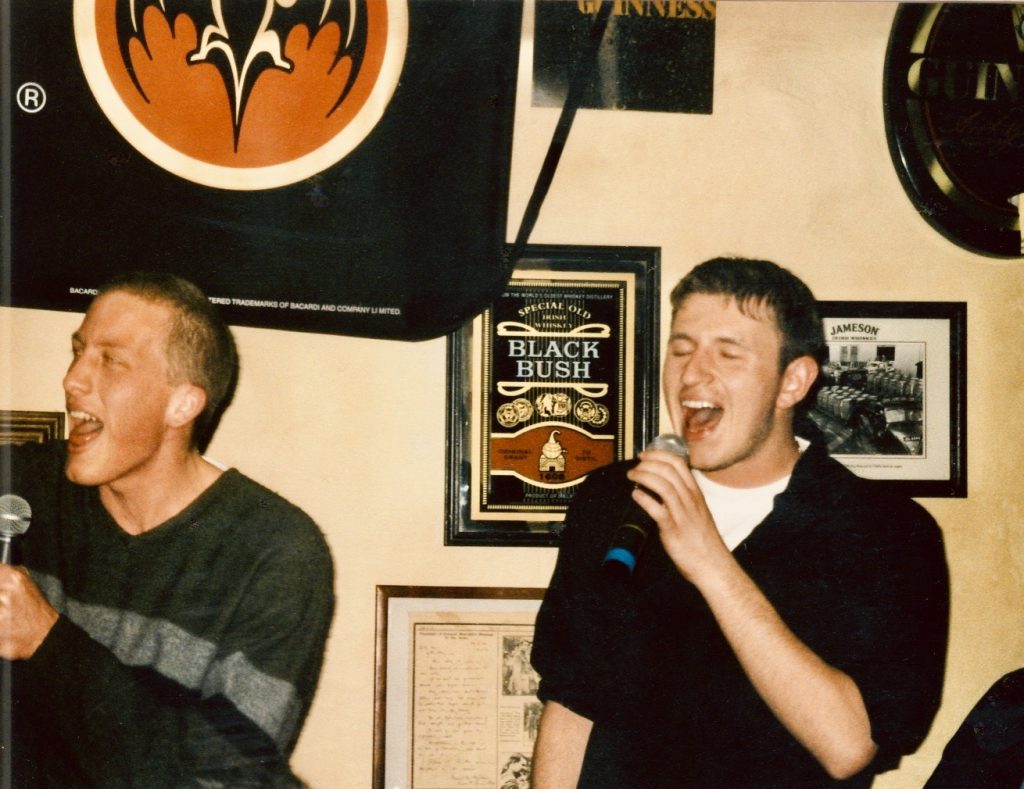 With Rich at The Dubliner.

I spent a fair chunk of time hanging out at Aupark, Bratislava’s biggest shopping mall. From time to time, I might catch a movie there with Sladj and Goldblum. Ben and I also made a tradition of hitting the food court after our weekly squash sessions.

Moreover, Aupark hosted the school’s bowling league. A decidedly average bowler, I found myself drafted into The Pin Monkeys alongside an elfin Slovak teacher, Martina, an English guy known as Andrew the Bear and an eccentric Canadian called John, who looked a bit like Dustin Hoffman. 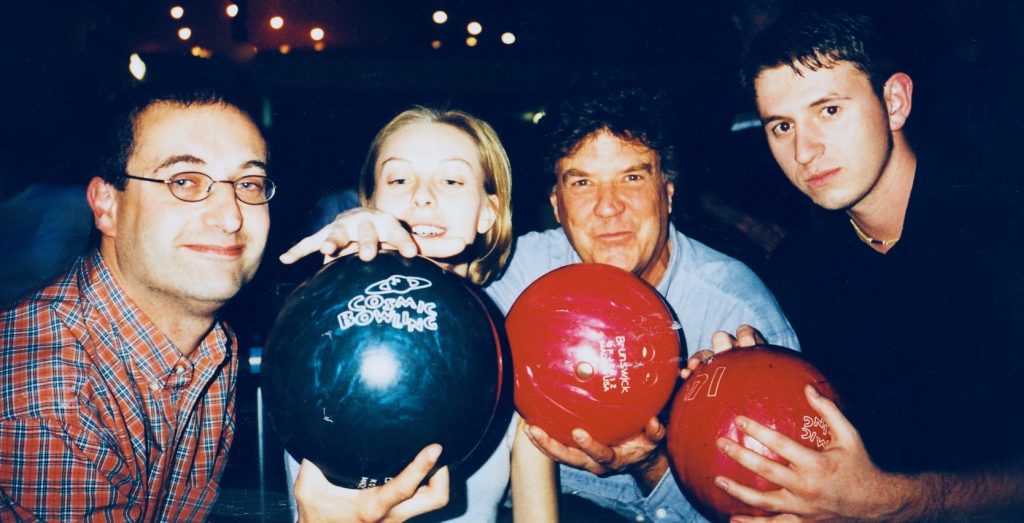 Our main rivals were The Delvita Dogs, featuring Minnesota Jordan and Clockwork Orange Paul. Occasionally turning up in fancy dress, Jordan might appear as a prohibition era gangster, Paul a Bowie-flavored fashionista. Whatever the outfit, Jordan and Paul were always good value.

Group activities aside, my closest allies were Ben and Goldblum, who I’d regularly meet for beers and bites. It was certainly a curious dynamic: Ben the easily riled Englishman with a dry northern wit and Goldblum the laid-back, chain-smoking American with the Tennessee drawl.

In late October the three of us spontaneously decided on a weekend trip to Vienna. Taking the train over from Hlavná Stanica, Bratislava’s dump of a train station, on arrival we checked into a creepy hostel that used to be a mental asylum. Goldblum drew the short straw and ended up with the top bunk, a berth Ben and I were quick to label “The Death Bed”. 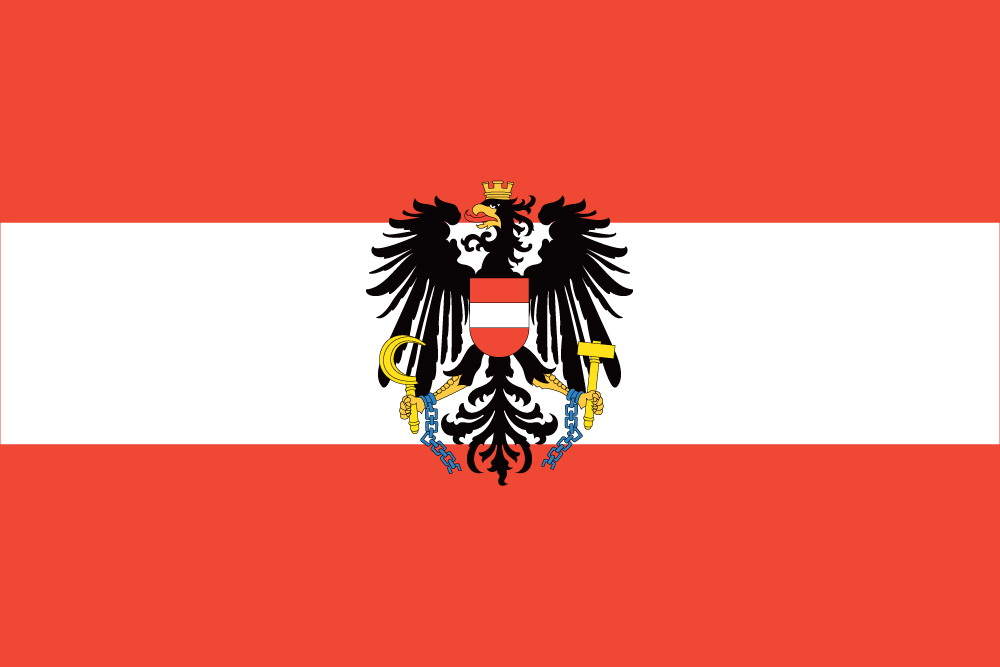 Unfortunately, this playful title almost turned out to be prophetic. That first night we returned to our room at some ungodly hour, all three of us swaying from the effects of the evening’s merrymaking.

Having awkwardly clambered up to the summit of his crib, Goldblum lost his footing and came crashing down with an earthquake-like force that had me instantly wondering how many bones he’d broken. Luckily, his injuries were merely cosmetic. However, he still made sure to transfer his bedding down to the floor for the remainder of the stay. 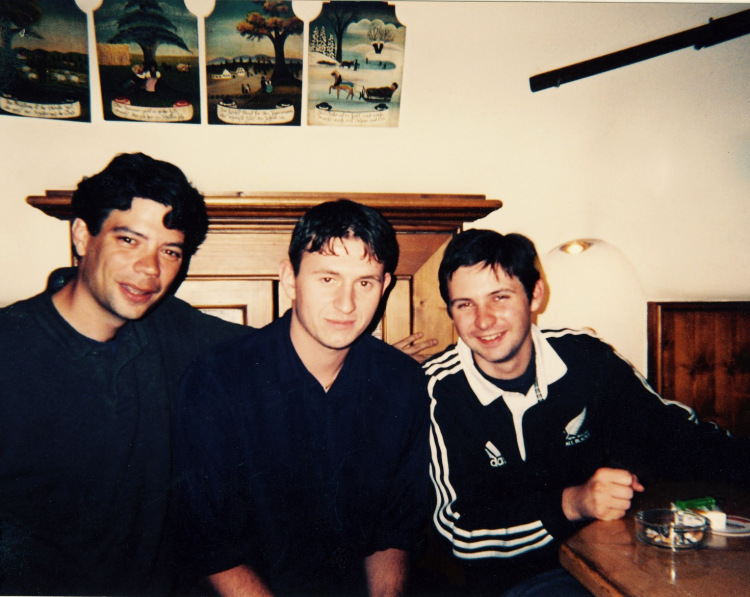 Hostel accidents aside, it was a great weekend that even a persistent barrage of slanting rain couldn’t ruin. We took in St. Stephen’s Cathedral, dropped by Mozart’s House and lost our way in the suitably named Bermuda Triangle District. In between, we sought regular shelter from the downpours, kicking back with prolonged lunches, lazy dinners and endless beers. 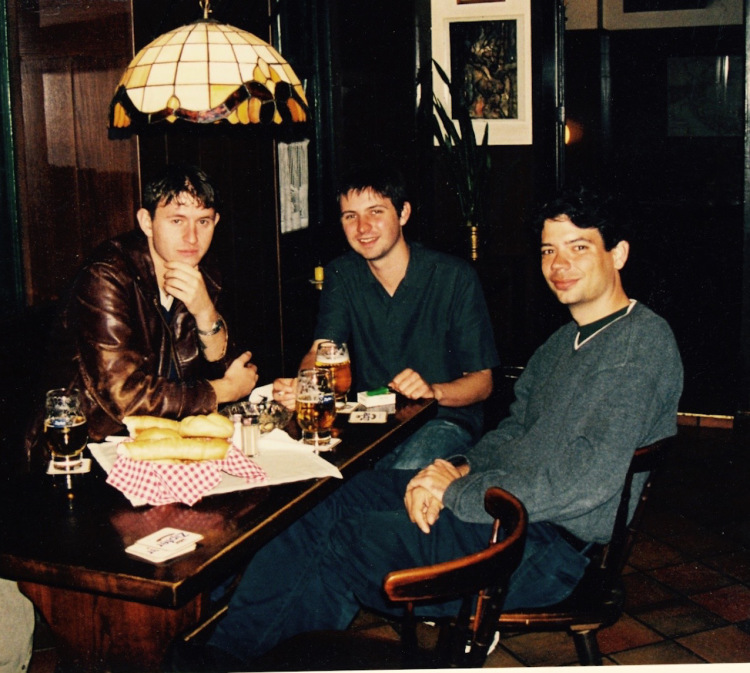 Both Ben and Goldblum were big drinkers and my attempts to keep up proved futile. Nevertheless, it was during these bouts that the basis of our friendships formed. We discussed politics, quoted our favourite movies, handpicked our choice records and reminisced over ex-girlfriends.

Heading to a city sports bar called Champions, we watched England’s 2-1 victory over Slovakia in the European Championship football qualifiers. It still makes me chuckle to think about Ben and I enlightening Goldblum to the rules of the offside trap with salt and pepper shakers. 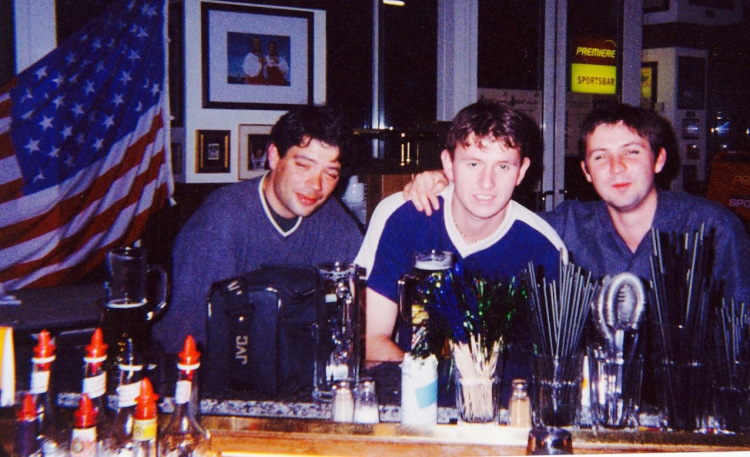 Late into our final night, we learned that both of Goldblum’s parents had recently passed away and that Ben wasn’t getting anywhere with Alice, a teacher he’d started seeing back in Bratislava. ‘‘She’s made it perfectly clear there won’t be any sex’’ he grimaced, downing the last of his Stiegl. ‘‘What about you and Sladj, kid?’’ enquired Goldblum.

‘‘Oh man… I don’t know’’ I conceded, the room beginning to revolve around me.

On the way back to the hostel there was singing, hugs with Austrian strangers and a spell where Goldblum wheeled Ben down the street in a shopping trolley. Had Rich been there, the verdict would have been unanimous: ‘‘Good times!’’ 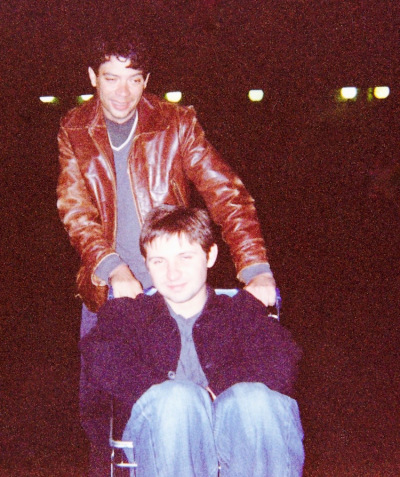 Back in Bratislava, it was a typical Tuesday morning at McDonald’s with Ben, Myles and I flirting with the McMinxes over coffee and fried apple pies. ‘‘Where the hell is Goldblum?’’ I complained, trying his phone for the umpteenth time. No answer.

‘‘Maybe he got lucky!’’ smirked Myles.

As soon as I entered the school lobby I knew something was wrong. Veronika, the sweet mousey receptionist came scampering over. “Lignon!’’ Wordlessly, she handed me a crumpled piece of paper.

It was a hastily handwritten note from Goldblum, with such appalling penmanship the thing was barely legible. Still, I could pick out the words ‘‘accident’’, ‘‘sorry’’ and ‘‘cancel my classes’’. Furthermore, scattered haphazardly across the paper were blobs of… surely not?

‘‘Um… I think that’s blood’’ said Troy, a fellow teacher who’d appeared at my side and was now scanning the letter for himself. ‘‘Yes’’ said Veronika, her wide eyes darting back and forth between us. ‘‘On my desk and on floor… I clean it’’.

‘‘Has anyone actually seen him?’’ I asked, my interior alarm bells clanging. ‘‘No’’ replied Veronika, arms folded across her chest. ‘‘And he not pick up phone, Little Katka is angry. Maybe she think he is drunk, I don’t know’’.

I looked at Troy. Troy looked back. ‘‘Do you have his roommate’s phone number?’’ I asked Veronika. ‘‘His name is Neal Armstrong’’. ‘‘Hmm, it’s still pretty early and I think it’s Neal’s day off’’ mumbled Troy, scratching his chin.

‘‘Excuse the pun, but he may not be over the moon to be woken up’’.

Veronika tried calling Neal, but to no avail. ‘‘I think we should go over there’’ I decided. On our way out we grabbed Ben, who was smoking in the courtyard. Filling him in on what little we knew, the three of us took a taxi out to the godforsaken borough of Dubravka.

I’d never understood why the school had placed Goldblum and Neal so far away from all the other teachers in such a run down area. Pulling up in front of his apartment block, I realised that his neighbourhood was even grimmer than he’d described.

‘‘Nobody home’’ muttered Troy, as I rang the bell for the fifth time. ‘‘He could be anywhere’’ said Ben, shifting his feet nervously. It was freezing cold in that depressing grey corridor and through my frustration I began beating the door with my fists.

Suddenly, just as we were about to leave, there was a low rustling sound from the other side of the door. A moment later, we heard a metallic click and the door inched open, a spear of corridor light piercing the blackness inside.

I stepped inside to see a ragged looking Goldblum standing in his trusty brown leather jacket. One arm leaning against the wall for support. Motionless, he stared through me with bloodshot eyes, a purple-black bruise pooling out from his mouth and up to his right cheek. He attempted a smile, but his twisted jaw seemed immobile. ‘‘Hey kid’’ he slurred, trudging off towards the living room sofa.

Troy was already on the phone to the school as we joined Goldblum in the living room. Tentatively sitting down next to him, I glanced up at Ben who was standing a few feet away, hands stuffed in his pockets. He looked as though he was going to be sick.

‘‘Do you think you can drink something?’’ I asked. Goldblum gave me a non-committal shrug as I headed for the kitchen. Having secured a glass of water and three cups of tea, I returned to my spot on the sofa, where the three of us exchanged cagey Mexican standoff looks.

Thankfully, Troy returned and broke the silence. ‘‘I spoke to the school’’ he said, in his mumbly way. ‘‘They understand the situation and Zuzana’s coming right over’’.

‘‘Good’’ said Ben. We got no further reaction from Goldblum, who had now slumped back, eyes closed, laboured breathing. I let a minute or two pass until I could bear the suffocating silence no longer. ‘‘Jon’’ I said, turning to face him. ‘‘What happened?’’

‘Blood in the Lobby’ is the fourth installment of my short story series The Slovak Files.

You can also check out my extended travels report on Bratislava and Vienna.