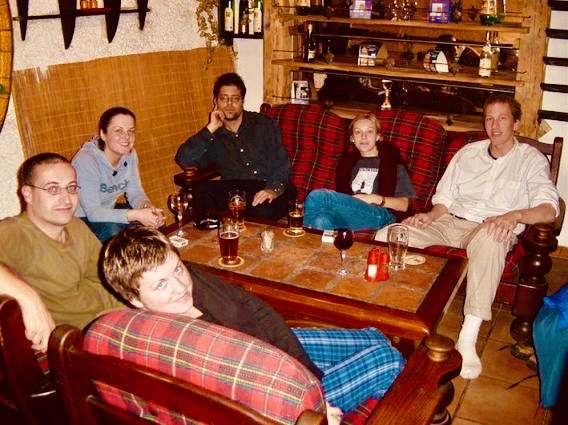 It was still dark when I awoke. With a thumping headache and sandpaper throat, I forced myself out of bed and shuffled over to the bathroom sink. Greedily gulping down mouthfuls of lukewarm water, it took me a few beats to realise where I was.

Then it all came flashing back, a whirlwind of images from our road trip across the country, culminating in twisted snapshots of the previous night’s festivities in Košice.

After barely four hours sleep, my body was screaming for a return to bed and the blissful coma I’d been enjoying. And yet, peering out the window at the breaking yellow-grey of dawn, I found myself wide-awake. Still dressed from the night before, I headed out into the Košice morning.

The chilly air washed over me in refreshing waves, hushing the complaints of my aching joints. The streets were empty and silent, save for the blunt movements of the sparrows as they whistled and fluttered among the trees. 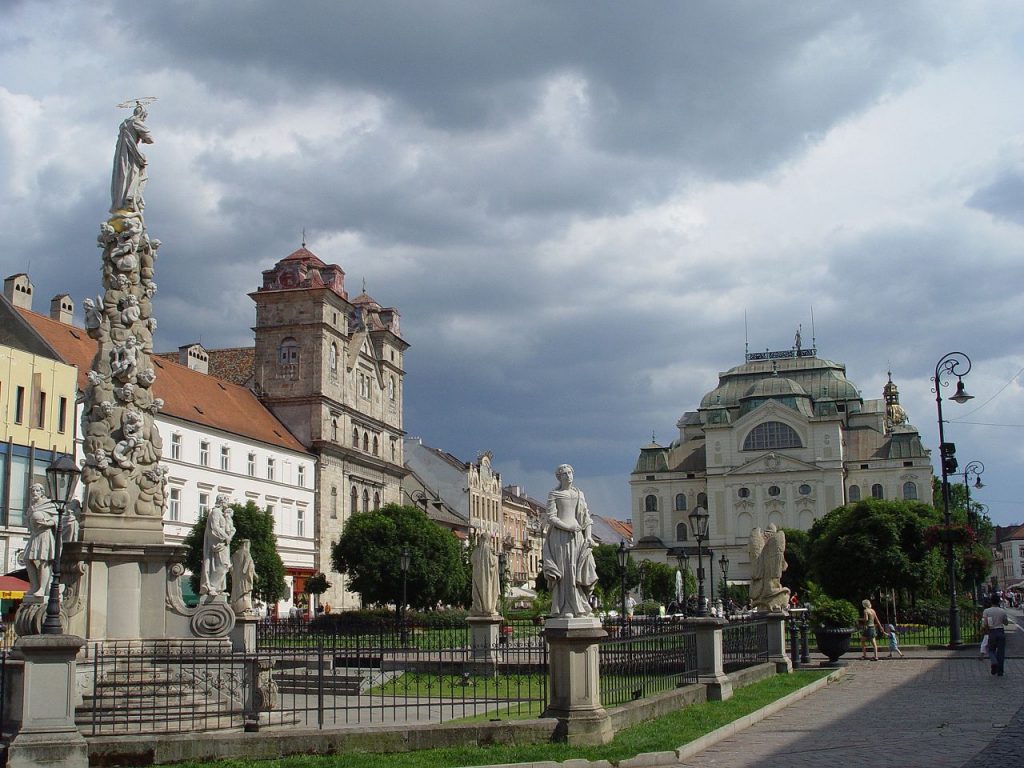 Revelling in the solitude of what was essentially a ghost city, I made my way down the handsome Main Street, Hlavná ulica. Halfway down, I came across an open bakery, where I treated myself to coffee and a sausage-bread thing that I only just managed to keep in my stomach. Sometime later, I arrived at the rich, neo-baroque exterior of The State Theatre.

The sun was out now and it was promising to turn into a fine day, a sheet of light blue having shouldered its way into the sky action. Seizing the moment, I caught the attention of a passing man, bicycle in hand, a loaf of bread and a newspaper nestled in its rusting basket. While he didn’t speak a word of English, he did know how to press the camera button, immortalising my place in that perfect, peaceful morning. 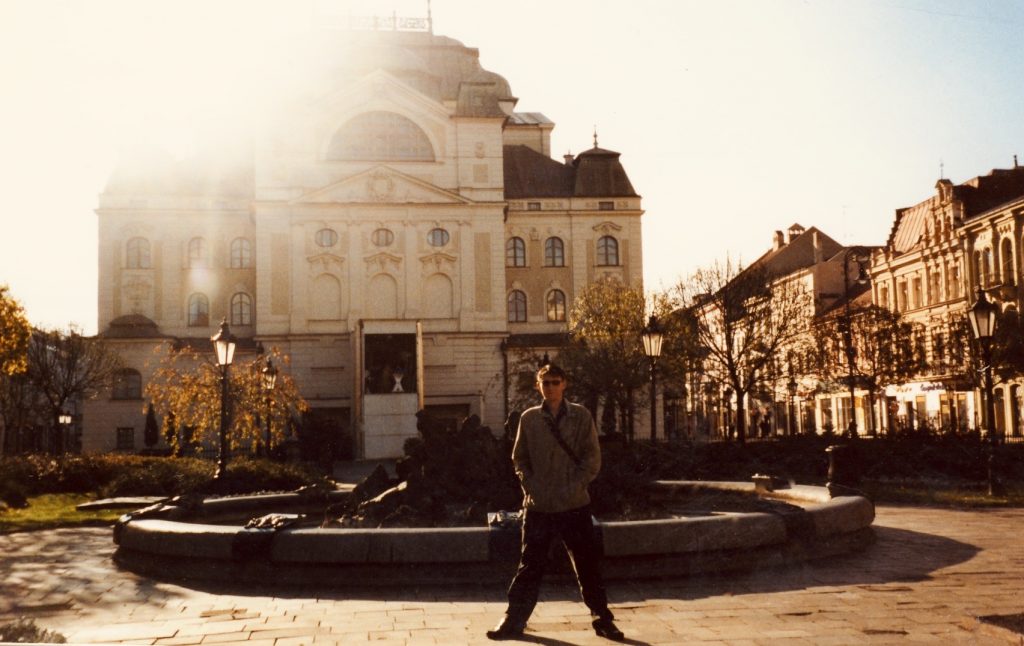 ‘‘You’re chirpy’’ mumbled Ben suspiciously, the bus cruising smoothly down another nameless motorway. The party atmosphere had dissolved into a funereal gloom as the group struggled to recover from the previous night’s merriment. A mural of red-eyes, sore heads, bed hair and general scruffiness, I smirked to myself while watching Paul half-heartedly tackle a grim looking sandwich.

Elsewhere, Sarah stared out at the passing scenery, her head resting against the window. Bill and Mary read quietly from their guidebooks, while Jordan, bug-eyed, doggedly sipped from his bottle of Becherovka. A few rows down Rich was fast asleep, head lolled back, mouth wide open. 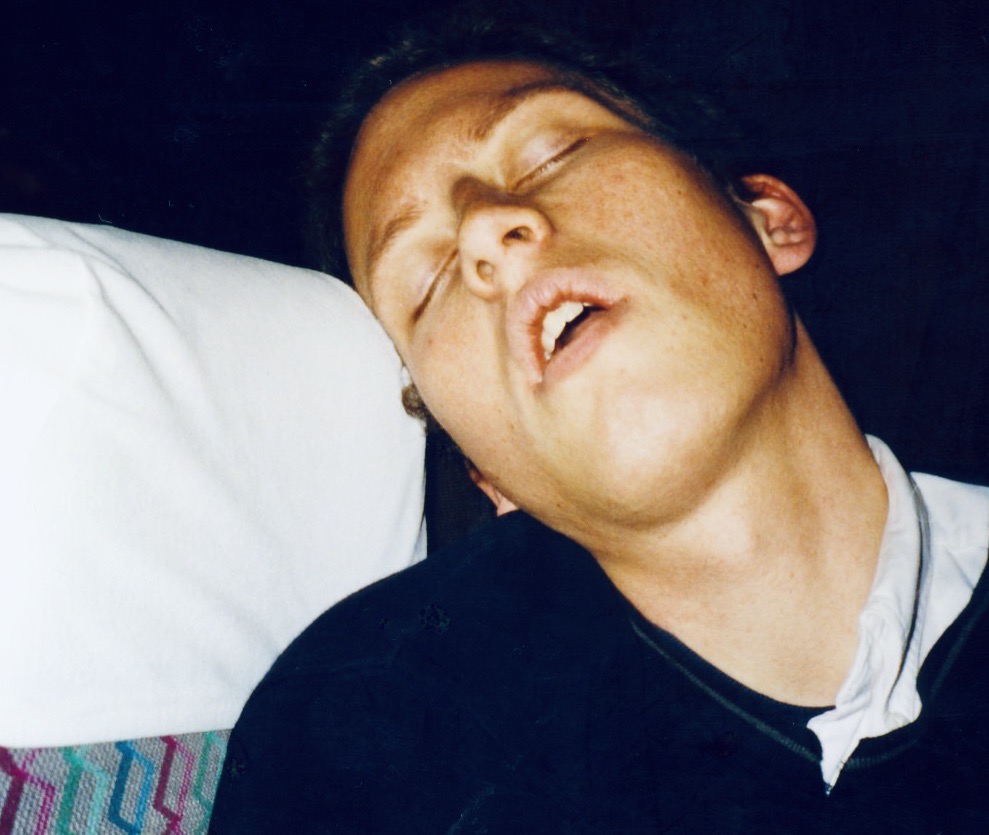 Rich having a “faaaaantastic sleep”.

It seemed somewhat appropriate that our first port of call was the sobering Open Air Military Museum in the Eastern town of Svidnik. Dedicated to the countless soldiers slain during the First and Second World Wars, we had a nose through the main exhibition before touring a vast open-air complex of cannons, military vehicles, rocket launchers and observation posts.

With an increasing number of the group having rejoined the land of the living, we darted around the place taking pictures and consuming all the info on various plaques. 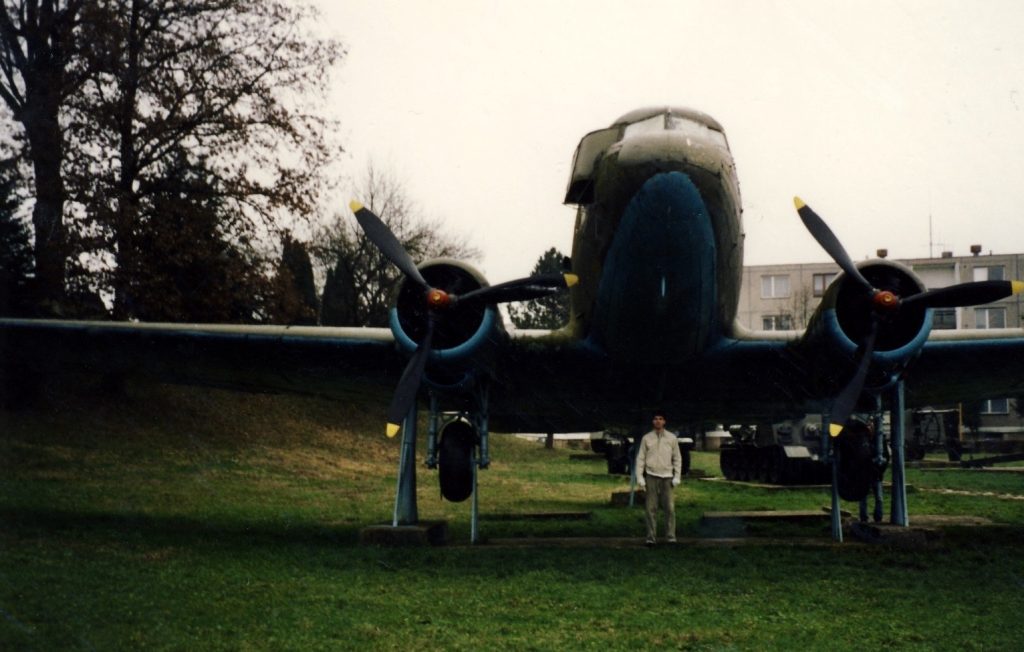 There was a low ripple of murmured approval across the bus. A few rows away, the nerds were engaging in some kind of mathematics contest, their yapping voices an interweaving riddle of perplexing numbers and cryptic formulas.

Beside me, Myles was destroying a bowl of cold, limp pasta he’d picked up from a service station. Apparently, the bus driver had complained to Eric about the general mess onboard. Hence Myles was improvising with a plastic bag invention he called The Remington Super Saver.

With the handles tied around his ears and the interior hanging under his chin, he was able to hold his pasta bowl directly over the mouth of the open bag. This allowed any stray scraps to fall directly in.

‘‘Were you the kind of guy who needed a bib when you ate?’’

I asked, pushing an invisible microphone towards him. ‘‘Oh yeah!’’ gurgled Myles, through a mouthful. ‘‘I used to dump that shit all over me!’’ Scooping up another forkful, he turned to me with a wink. ‘‘But now, with the Remington Super Saver…’’

Bardejov turned out to be the day’s second ghost town. But while Košice had the excuse of my visiting it at the crack of dawn, here it was early afternoon and there wasn’t a creature to be seen.

As strange and creepy as this felt, it only added to the considerable allure of the town centre. In fact, Bardejov was a photographer’s dream, especially its perfectly preserved medieval square full of gothic and renaissance houses. 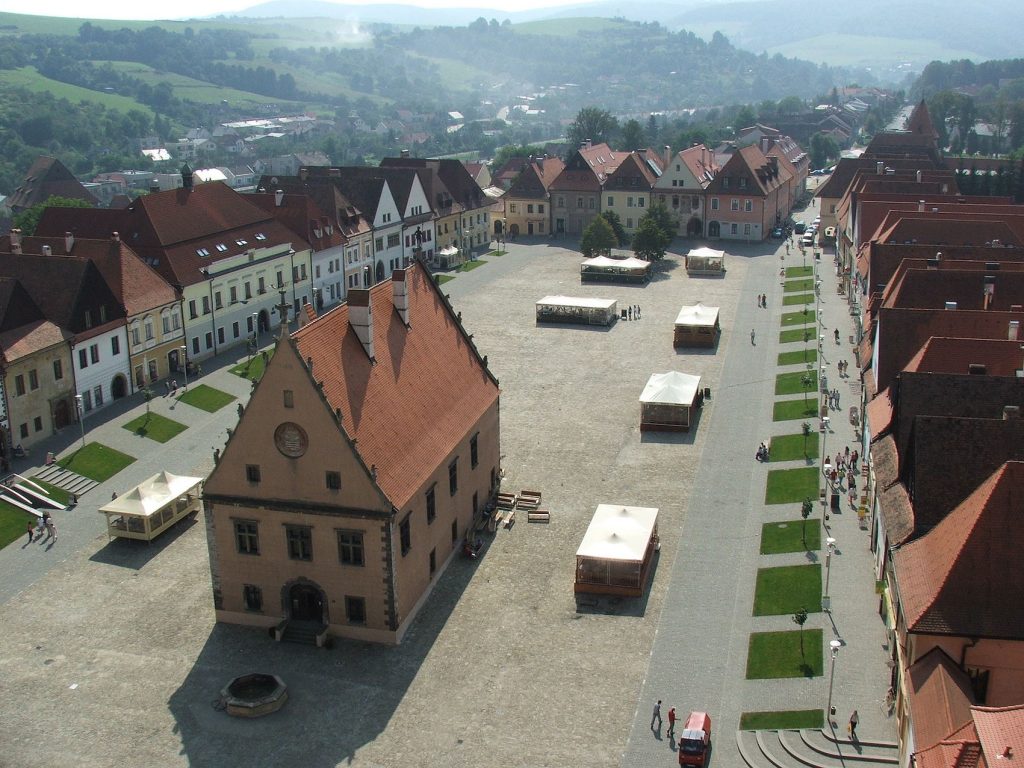 Strolling around, we passed a series of hibernating restaurants, closed down shops and curtain-drawn residences. Any inhabitants presumably hiding inside clutching garlic and crucifixes.

Looming over proceedings was the monumental Church of Sv. Aegidius, host to an impressive interior with no less than eleven gothic winged altars! With nobody to be seen in the Church either, Paul and I briefly discussed whether we could get one of the altars back to the bus. 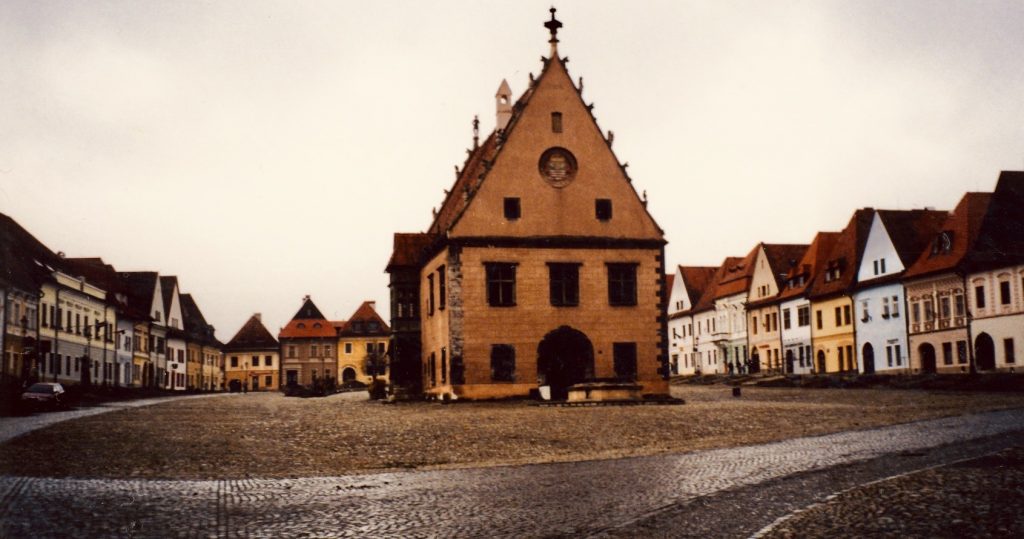 Bardejov may have been incredibly picturesque, but there was absolutely nothing to do. Thus Eric announced that the bus would be heading onto the nearby town of Bardejovske Kupele, where there was a renowned spa. As this news broke, Myles discovered an Irish Pub on the square. Moreover, lo and behold, the damn thing was open! 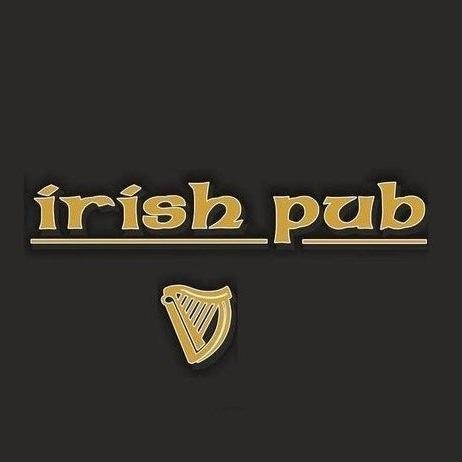 Half the group bussed off to the spa, while the rest of us broke for lunch at Bardejov’s weird Irish Pub. We were the only customers and the barman was a grumpy Slovak who a) spoke not a word of English and b) didn’t exactly seem grateful for our patronage. Furthermore, the bangers and mash I ordered was crap. Looking back, I should have joined the others for a herbal bath.

On our way back to meet up with the rest of the group a few hours later, we came across a pair of local labourers. They were trying (and largely failing) to shift a hulking waste disposal trailer across the square. Observing their struggles, Rich and I agreed to loan them some elbow grease. Slowly but surely, we helped them drag their beast of a vehicle to the other side of the square.

Not exactly a story for the grandchildren, but by Bardejov standards this was probably quite the event for the people behind the curtains. Along the way, I managed to throw Sarah my camera so that she could grab a hasty shot of our efforts. 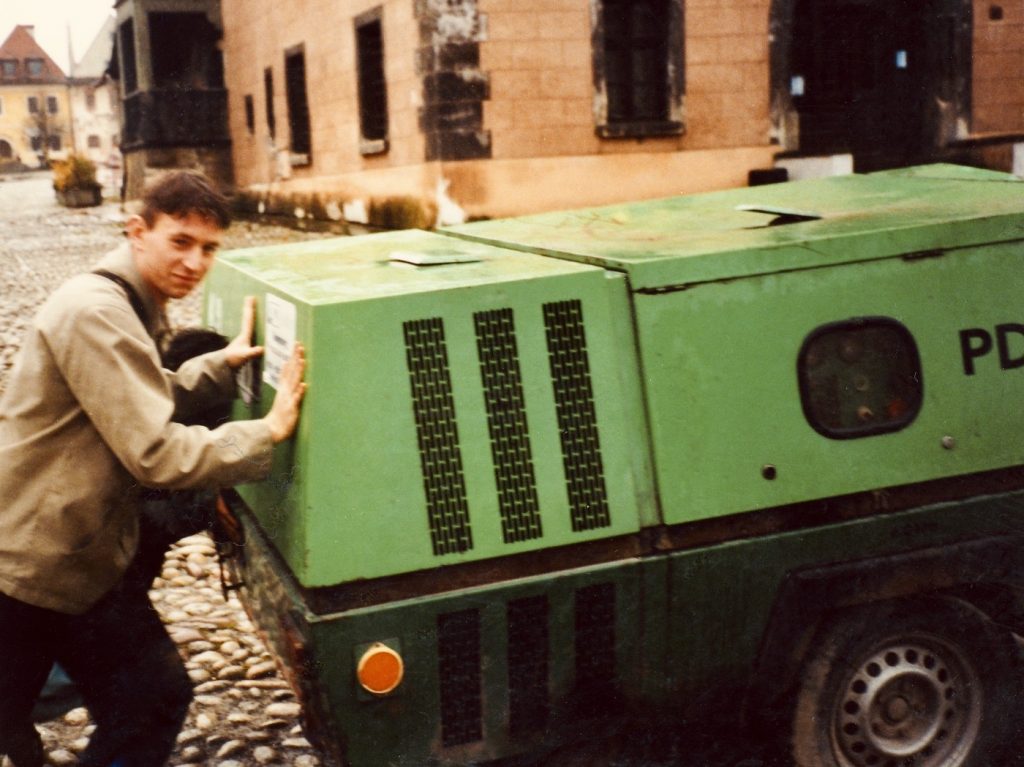 Getting hands on in Bardejov.

That night, back in Košice, most of us opted for a low key evening. Gathering for dinner and drinks, the mood was chilled and reflective. Abstaining from alcohol altogether, I retired to the hostel early in order to claim the nine hours of sleep my body so desperately needed.

The next morning, we began the long drive back to Bratislava. Happily, there was time for one last stop en route. Happier still, the UNESCO-approved town of Banská Štiavnica turned out to be the most remarkable part of the trip. After a suitably wintry lunch of soup and bread at a cute little restaurant on the main square, we headed out to explore. 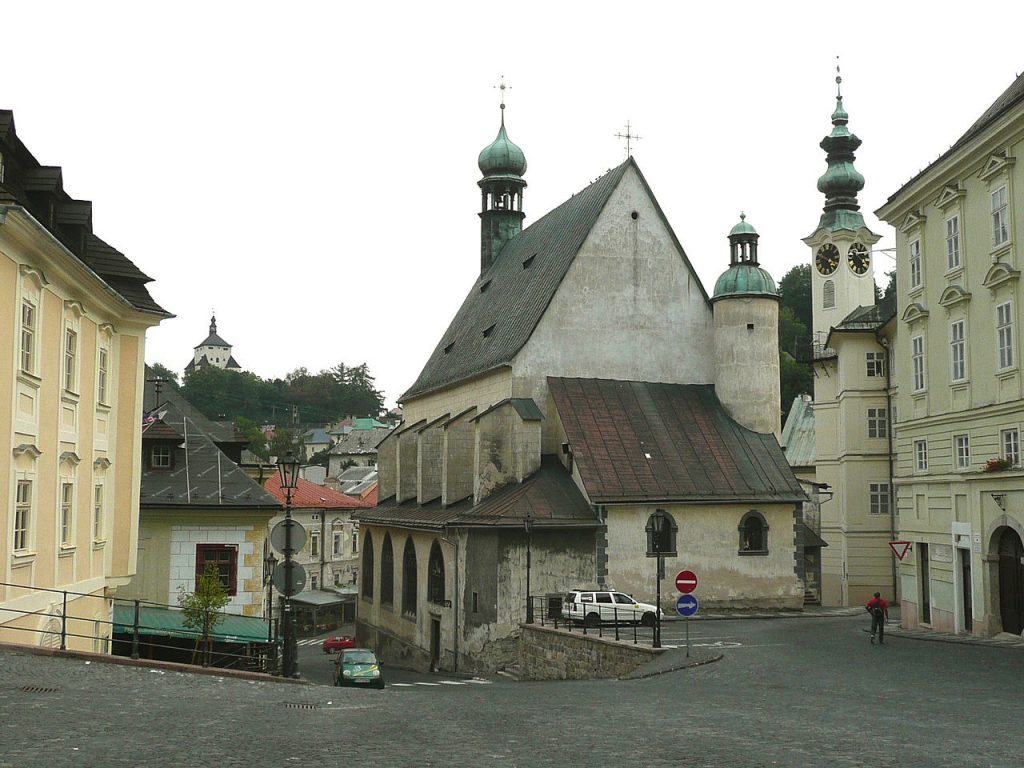 Set amid the forests of The Štiavnica Mountains, our afternoon walk along the town’s ascending pathways and winding alleys was like stepping back in time. Historically, Banská Štiavnica was a booming town that once stood as the largest mining centre of The Hapsburg Monarchy.

But at the end of the nineteenth century the town fell on hard times and the last mine closed down in 2001. Looking out over its tiled skyline, some of the multi-coloured buildings remained wonderfully untouched. Although to be fair, in most cases this was to the point of total dilapidation. 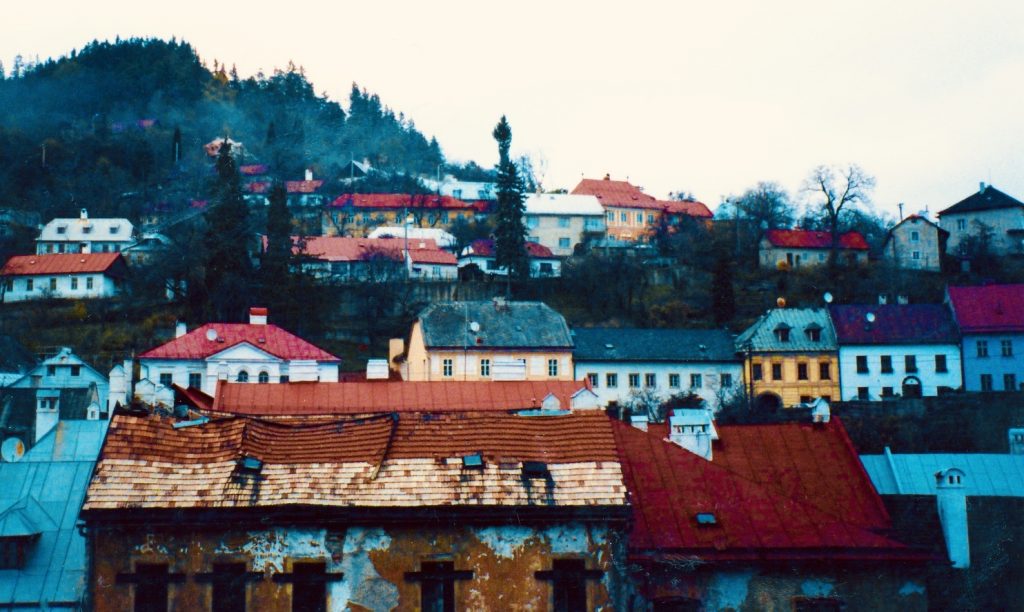 With just a few hours until we had to be on our way again, my wanderings were brisk. I took in a pretty old church and atmospheric views of a pair of nearby castles. Strolling through an impeccably kept cemetery, I came across an old lady stooping down over a marble headstone.

She had a beautiful bouquet of flowers clutched in her hands. Wrapped in a thick fur coat and matching hat, she rose to give me a solemn nod and a shaky smile. Then, ever so slowly, she plodded off towards the cemetery’s gated exit. 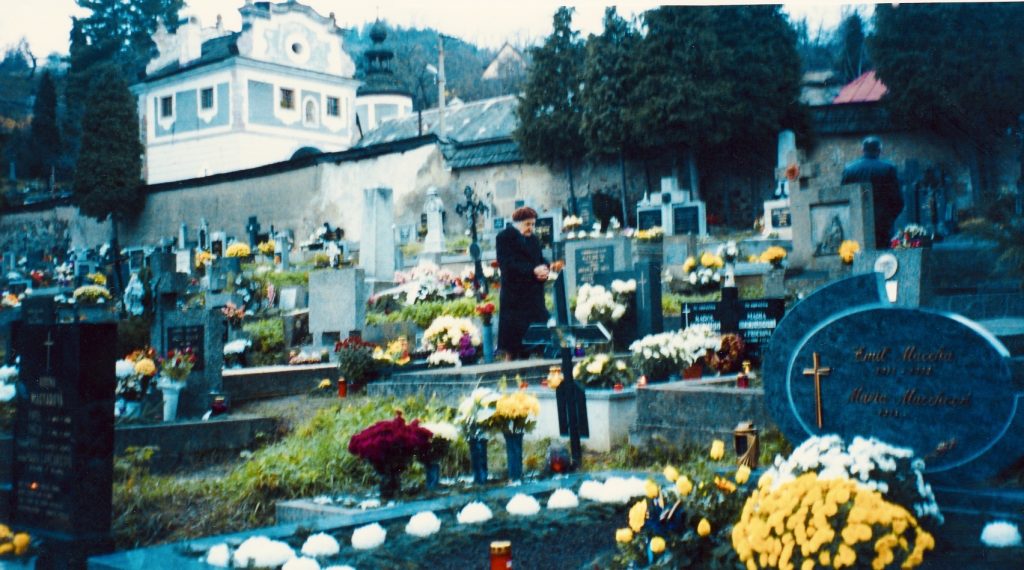 “Bratislava!’’ boomed Eric, as we rolled through the city limits.

All around me people were waking up with yawns and stretches, while nearby a wide-awake Jordan silently head-banged to some rocking headphone music. It’s good to be on the road back home I thought, my mind already turning to Monday morning Obchodna classes with Peter and the Katkas.

Wait a minute… home? I realised this was the first time I’d thought of Bratislava in such terms. A short while later, having reflected on it a little, I concluded that it felt good.

‘‘Heeeeey, what’s up?’’ called Goldblum, as Rich and I bumbled through the door, dropping our bags in the hallway. We found him in the living room, curled up on the sofa with a Nick Hornby paperback.

‘‘Sir Jon Goldblum in the house!’’ laughed Rich, clapping his hands together.

Rich and I spent a solid hour regaling our new flatmate with tales from the road trip. Eventually, Goldblum struggled to his feet with a tiger-like yawn and shuffled off to the kitchen. ‘‘Dinner time’’ he said, fetching some cooking oil from one of the cupboards. ‘‘You’re eating already?’’ I asked in surprise.

‘‘Well… I wouldn’t exactly call it eating’’ he replied, opening the fridge.

‘‘It’s a mincemeat, egg and noodle concoction… sludge really. Pretty much all I can eat for the next four weeks’’. ‘‘Ah’’ I replied, thinking of all the hearty meals I’d so nonchalantly dispatched over the past days.

‘‘Back at the hospital, I asked old Hirjak if he could open me’’ chuckled Goldblum, rubbing his stomach. ‘‘Maybe put a steak in there and sew it back up’’.

Laughing at the resulting imagery, I poured myself a glass of orange juice and took a seat at the breakfast bar. “So… this sludge, is there enough for two?’’ I asked, watching Goldblum fire up the stove. ‘‘Sure is kid’’ he answered, grabbing a handful of eggs, ‘‘sure is’’.

‘Road Trip Part II’ is the seventh part of my short story series The Slovak Files.

Road Trip Part I, a short story from Slovakia.