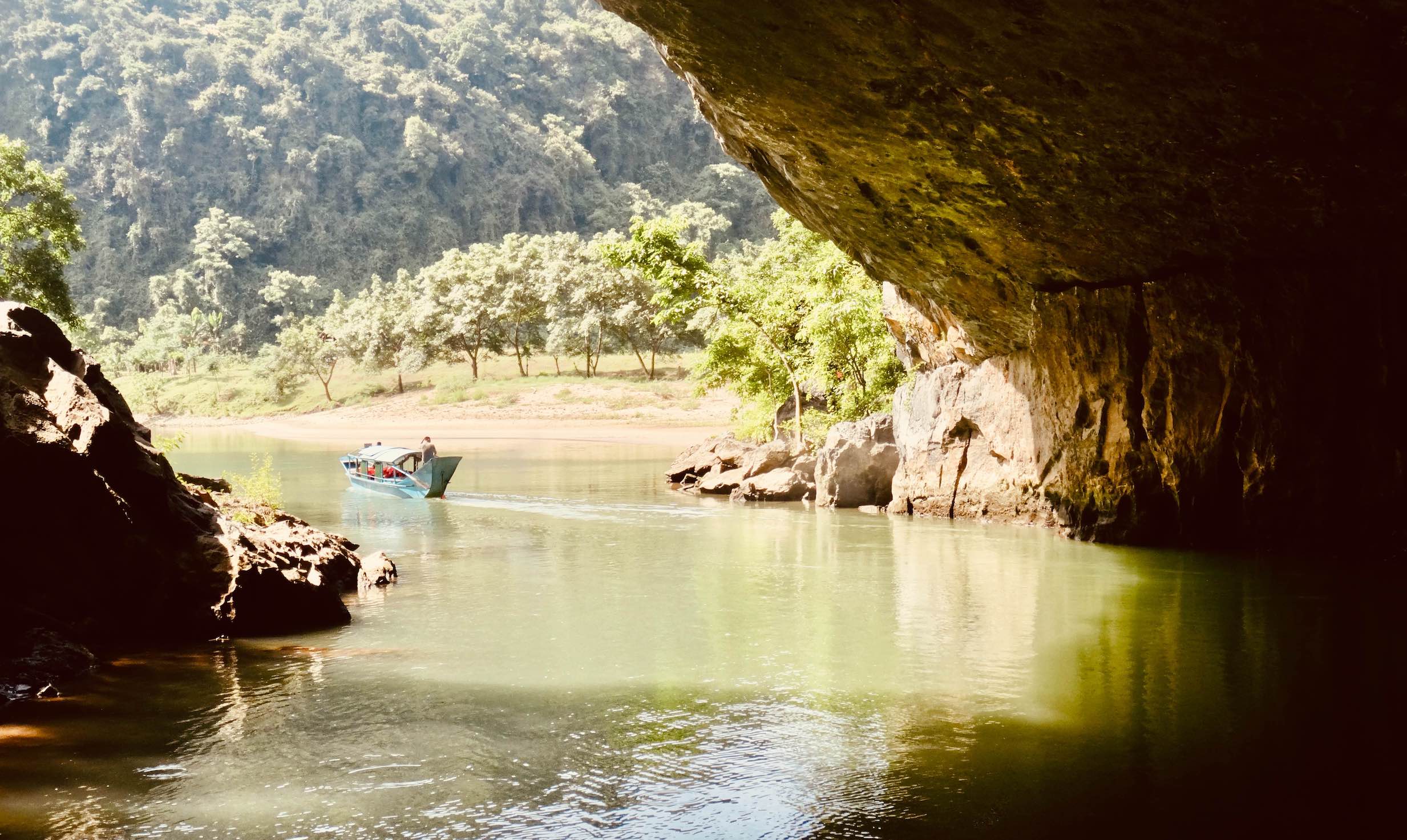 After a few relaxing days in the understated outpost of Dong Hoi, it was time for my much-anticipated day trip to Phong Nha-Ke Bang National Park. Home to tropical forests, underground rivers, UNESCO caves and Asia’s oldest karst mountains, I could have easily based myself here for a week of solid exploring. 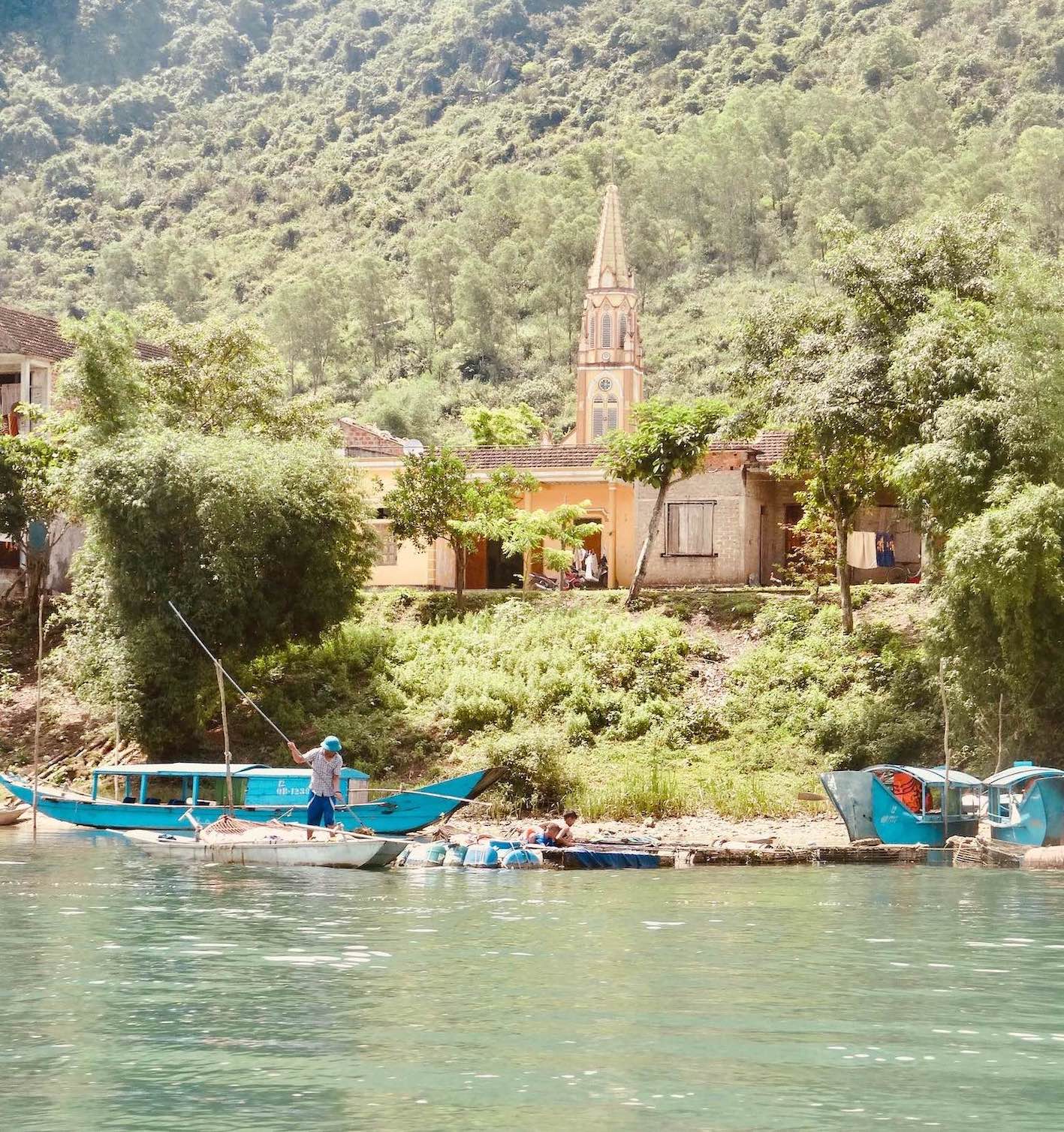 However, by this point I’d already committed myself to other locations. Thus I had just one day to pick off a pair of the park’s highlights. After much consideration, I opted to go and see two of Vietnam’s (and indeed the world’s) most beautiful caves.

Getting to Paradise Cave.

I travelled by bus from Dong Hoi on a service organised by Nam Long Hotel. First up was Paradise Cave, known in Vietnam as Dong Thien Duong. It took us around 1 hour 30 minutes to reach the cave’s entrance from the hotel in Dong Hoi. Some of the roads were a bit too twisty for my liking, but there was plenty of gorgeous scenery en route to distract me from my carsickness. 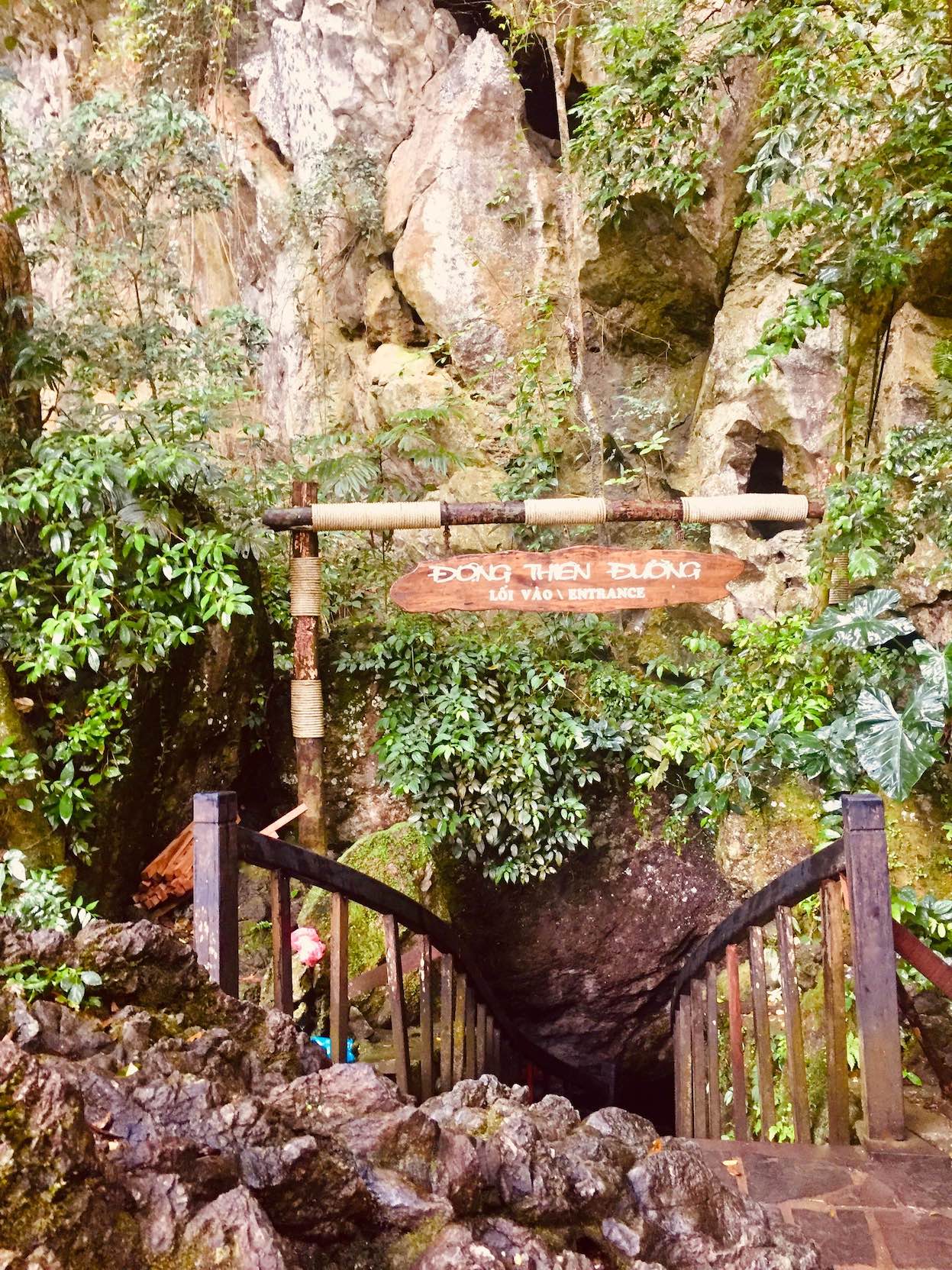 Inside the entrance chamber our guide gave us an overview of the cave’s fascinating history. Amazingly, these 360 million year old rock formations remained completely hidden until 2005. That’s when a local conservationist by the name of Ho Khanh discovered the cave during a bamboo research project. 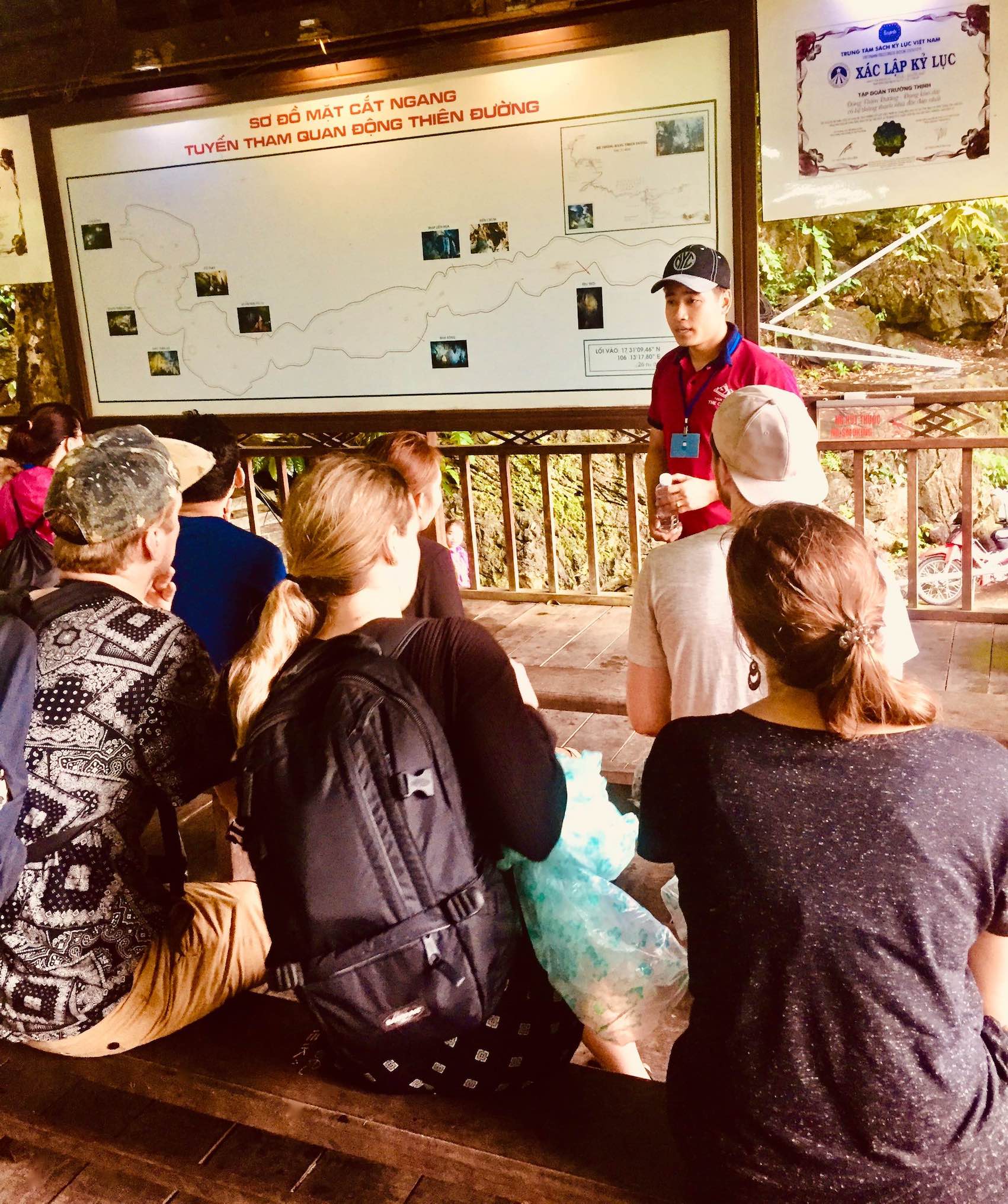 Before long a team from the British Cave Research Association arrived to carry out a professional exploration. And they were certainly impressed by what they saw! So enamoured, it turned out, that it was their suggestion to name it Paradise Cave. Initially they believed the cave was just five kilometres long. But later investigations actually revealed it to stretch on for a wondrous 31 kilometres! 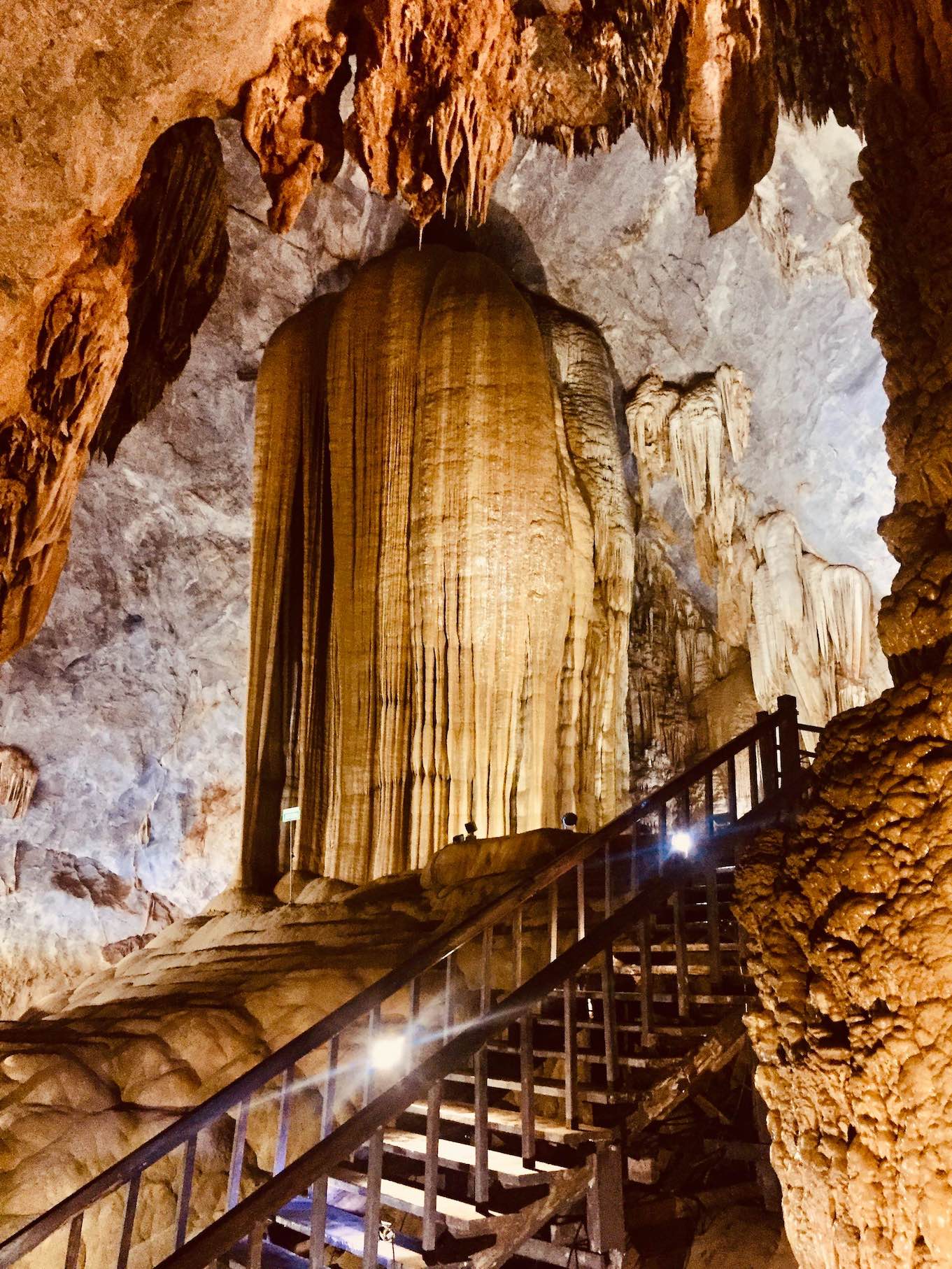 Today visitors get to walk down the first kilometre. It might not sound like much, but it’s definitely enough to see why the cave is held in such high regard. Indeed I remember letting out an audible gasp as I descended the long wooden staircase into a cavernous chamber. In truth my camera struggled to catch the cave’s beauty. How I wish I could go back and photograph them all again with my current camera. 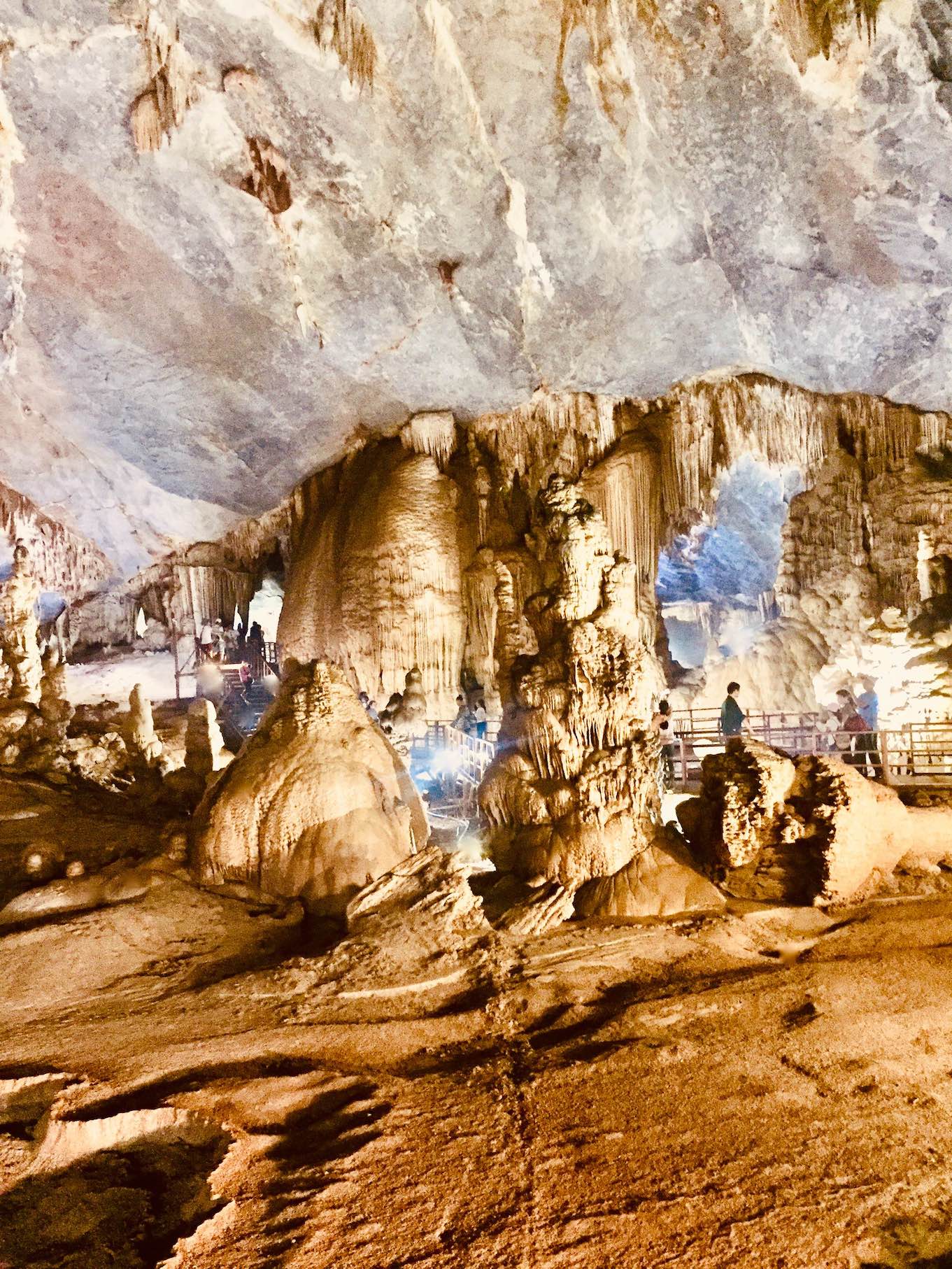 They’ve done a really good job presenting Paradise Cave. Visitors follow a boardwalk path right through the centre, which gets you up close and personal with many of the stunning stalactites and stalagmites. Here and there info boards give you the crazy names of all the formations. Much of this went over my head to be honest. 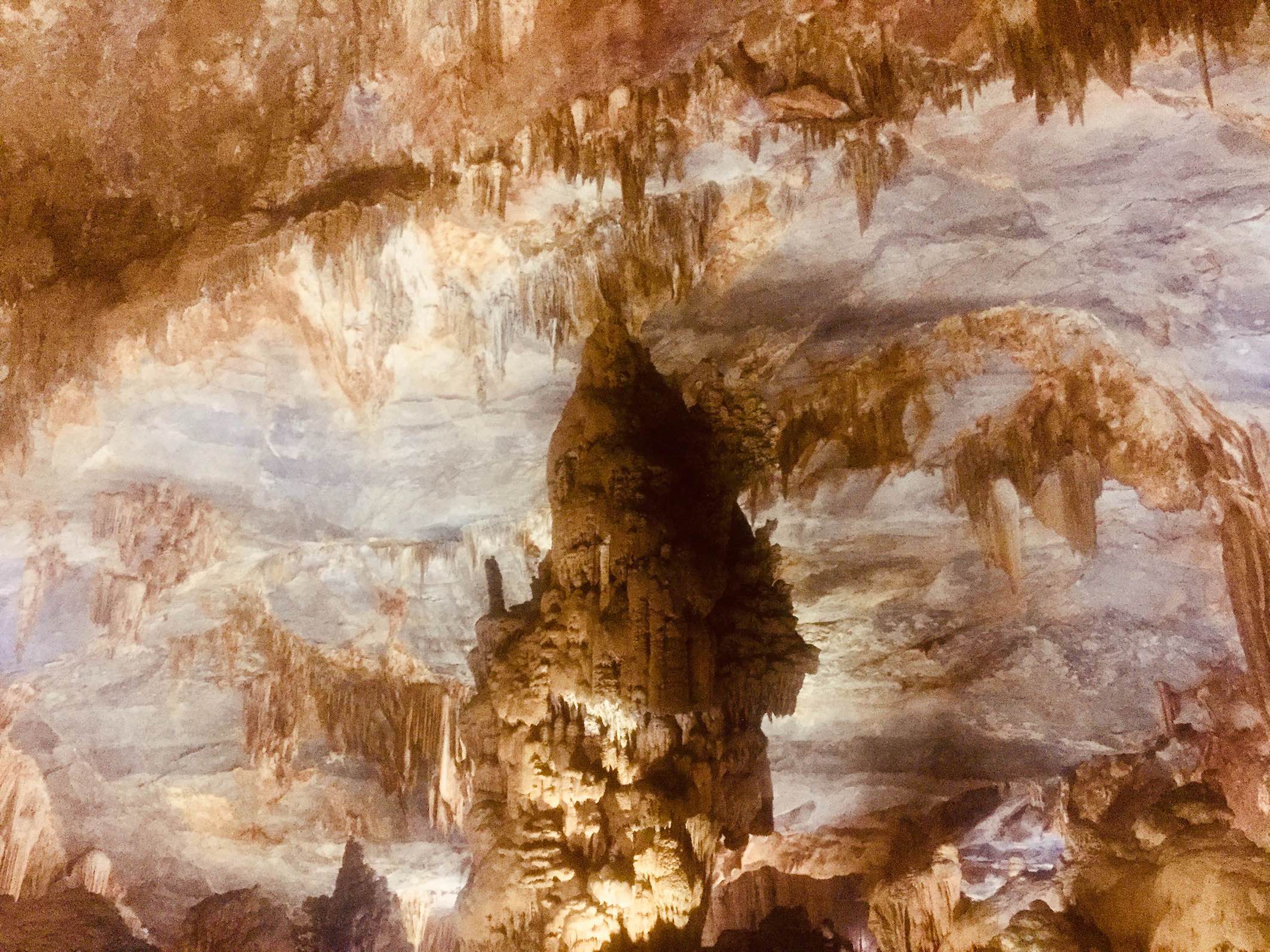 Rather, it was enough to simply breathe in the silence and coolness. To admire the amazing scope of the place. Gaze up at the ceiling, for example, which is 72 metres at its highest point, and you’ll see the most incredible hanging spears of rock. They’re like chandeliers, which I think adds nicely to the cave’s cathedral feel. 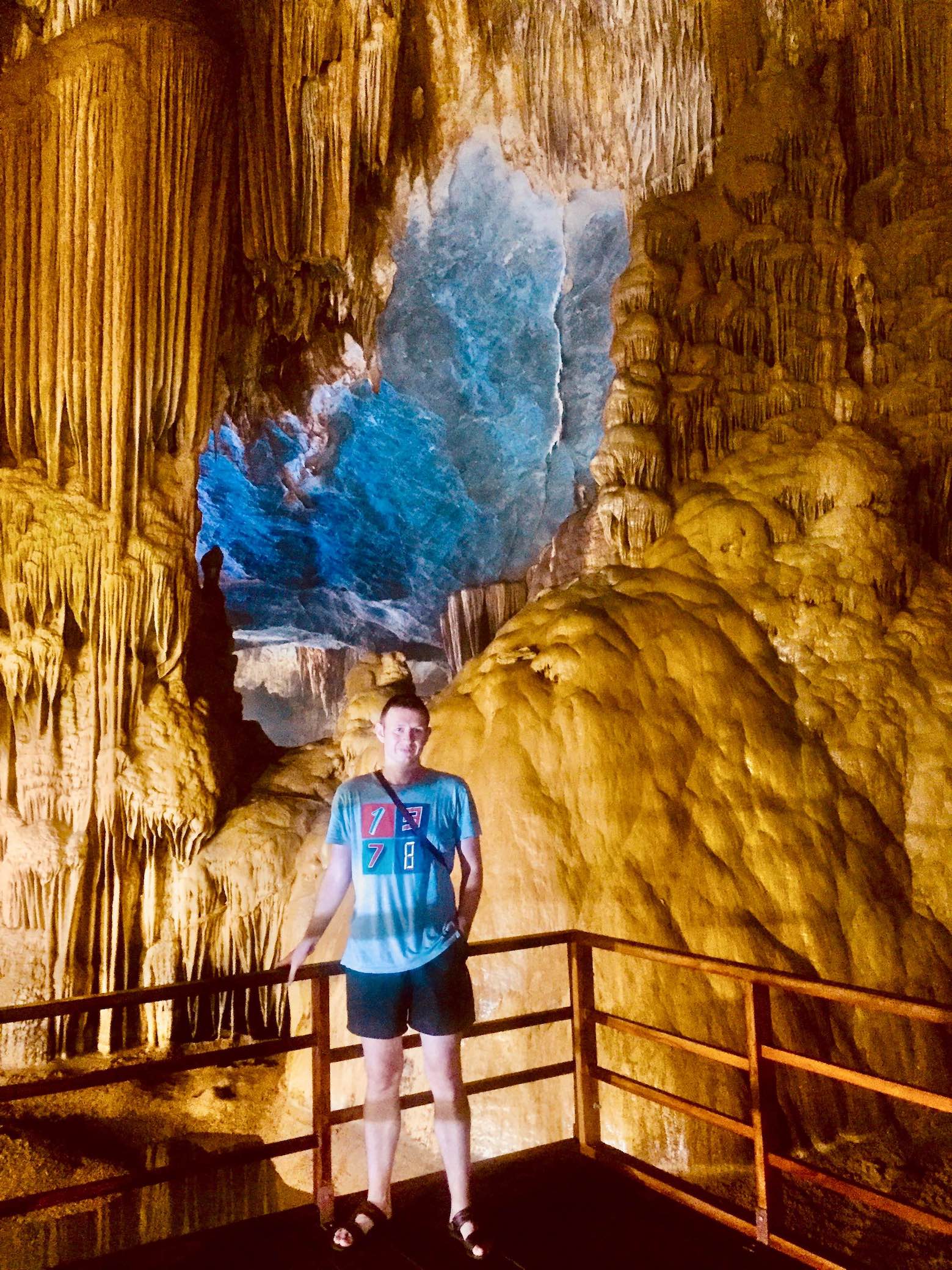 Other formations seemed positively terrifying. The one pictured below brought to mind the snarling mouths of the beasts in Ridley Scott’s Alien. 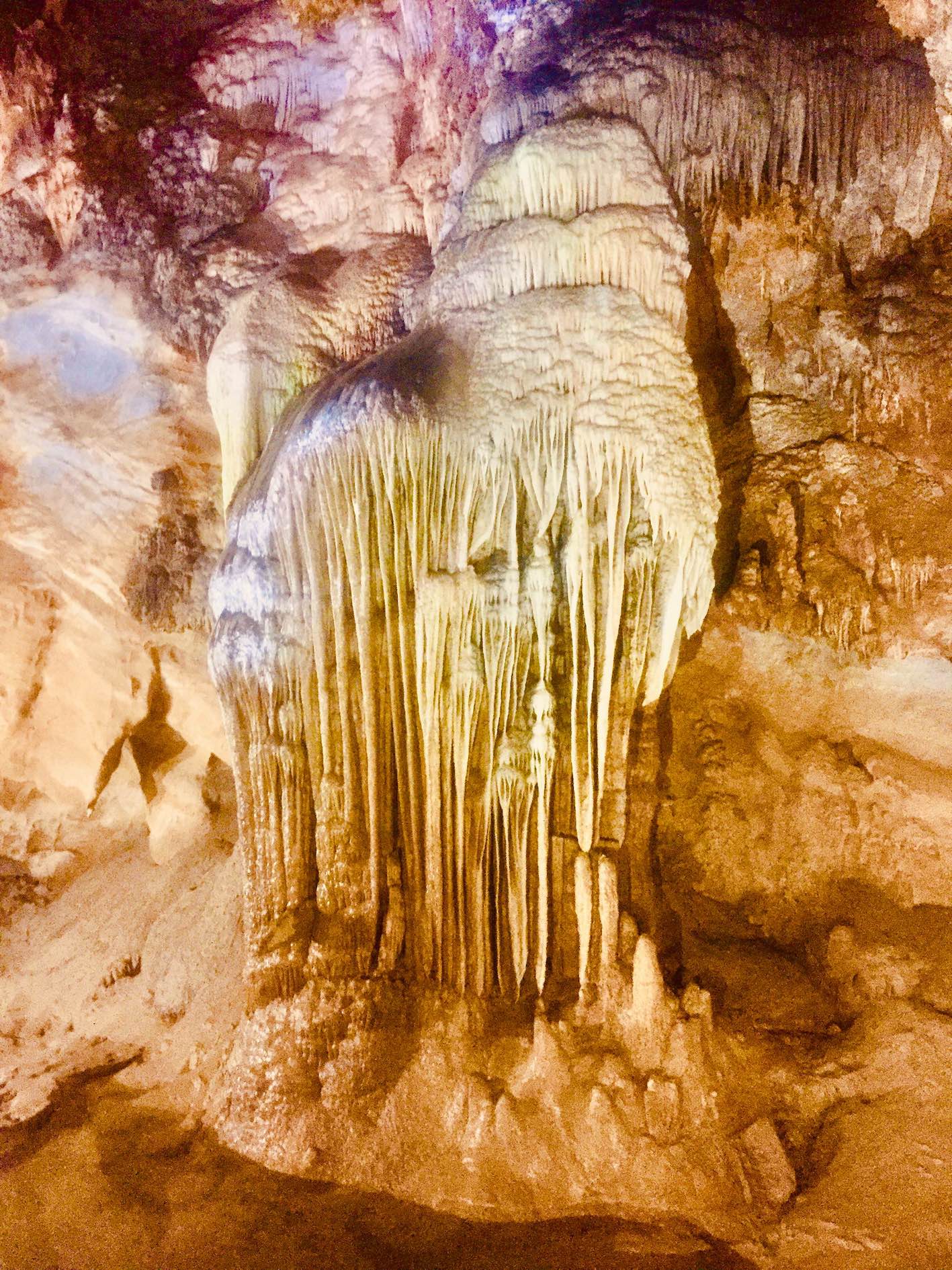 I was also interested to read that the cave team found a brand new species of scorpion in the cave! It’s called Vietbocap thienduongensis. Try saying that with a mouthful of marshmallows. 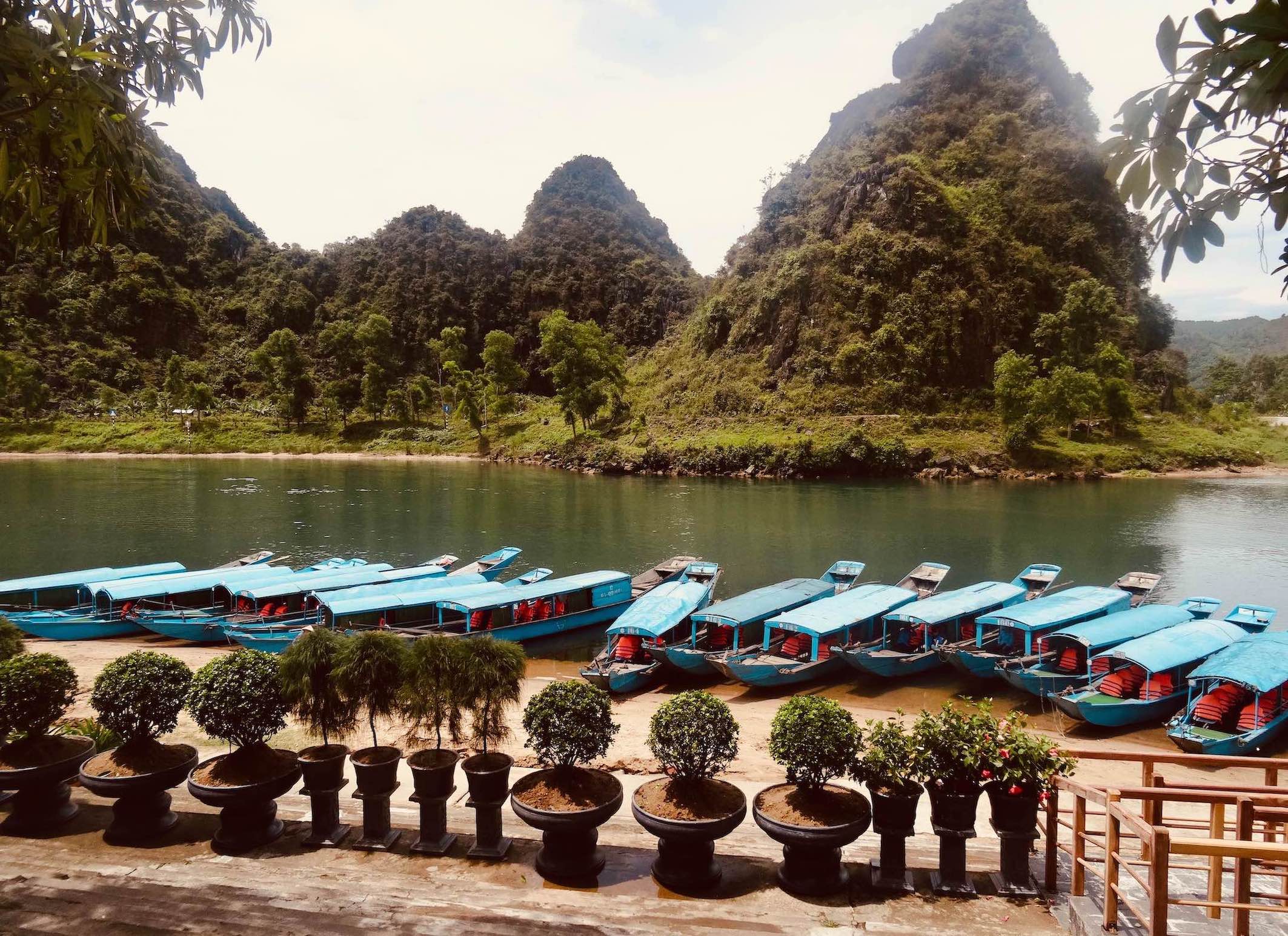 From Paradise Cave it was a one-hour drive to Phong Nha Vllage and this lovely section of the Son River. Jumping out of the bus, I immediately came face to face with a line of blue motor boats. All with a local captain patiently awaiting the arrival of visitors keen to reach Phong Nha Cave. 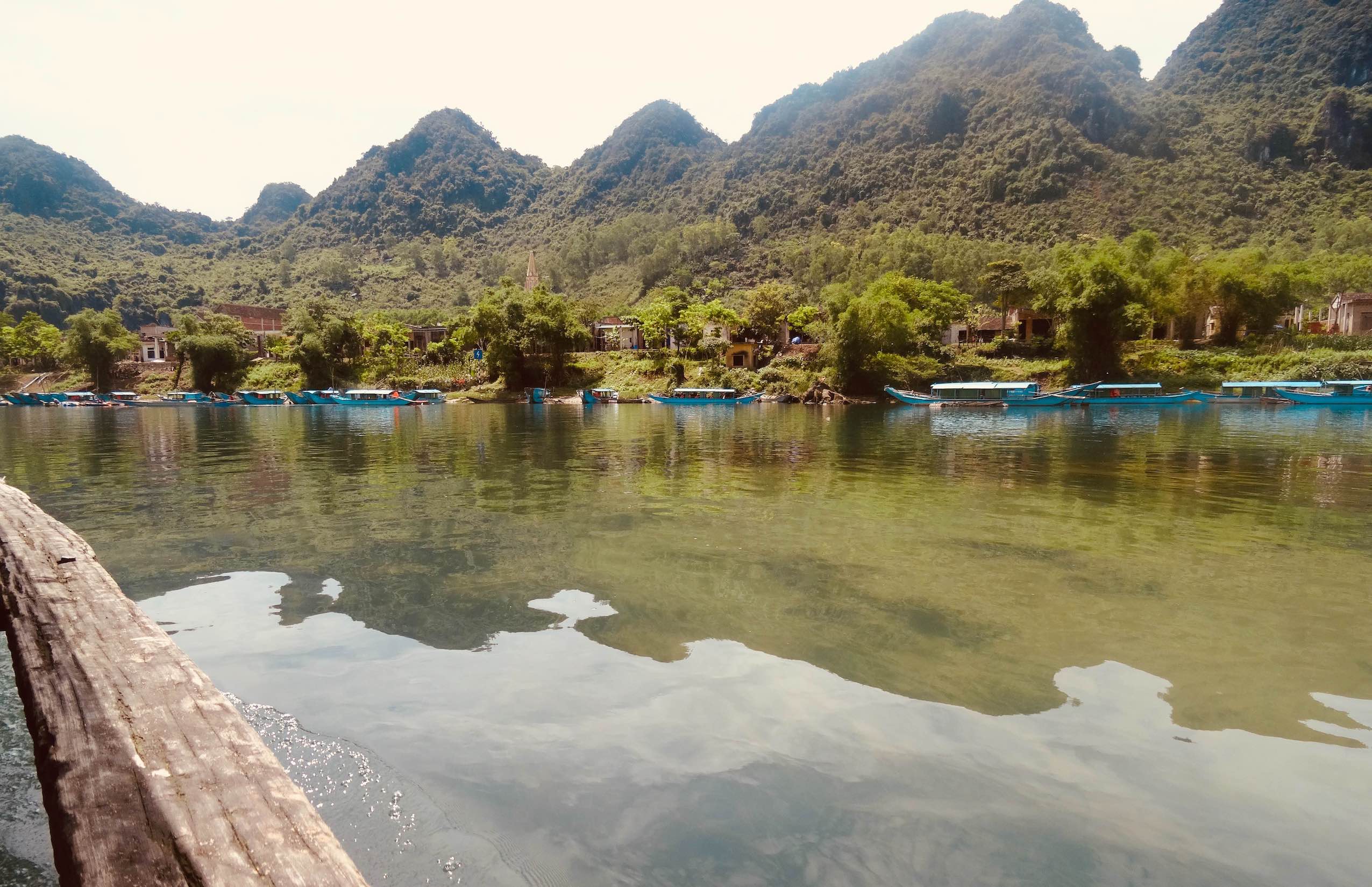 Cruising down the Son River.

It only takes ten minutes to reach Phong Nha Cave by boat from the village. But what idyllic scenery we enjoyed along the way, including thick forest, more of Vietnam’s signature limestone hills and even a few churches nestled in the greenery.

This was the first of Phong Nha-Ke Bang National Park’s many caves to open to the public. Accessed through the river itself, it stretches for a staggering 44 kilometres, so even longer than Paradise Cave. And just like the first cave, tourists can only see a short section. 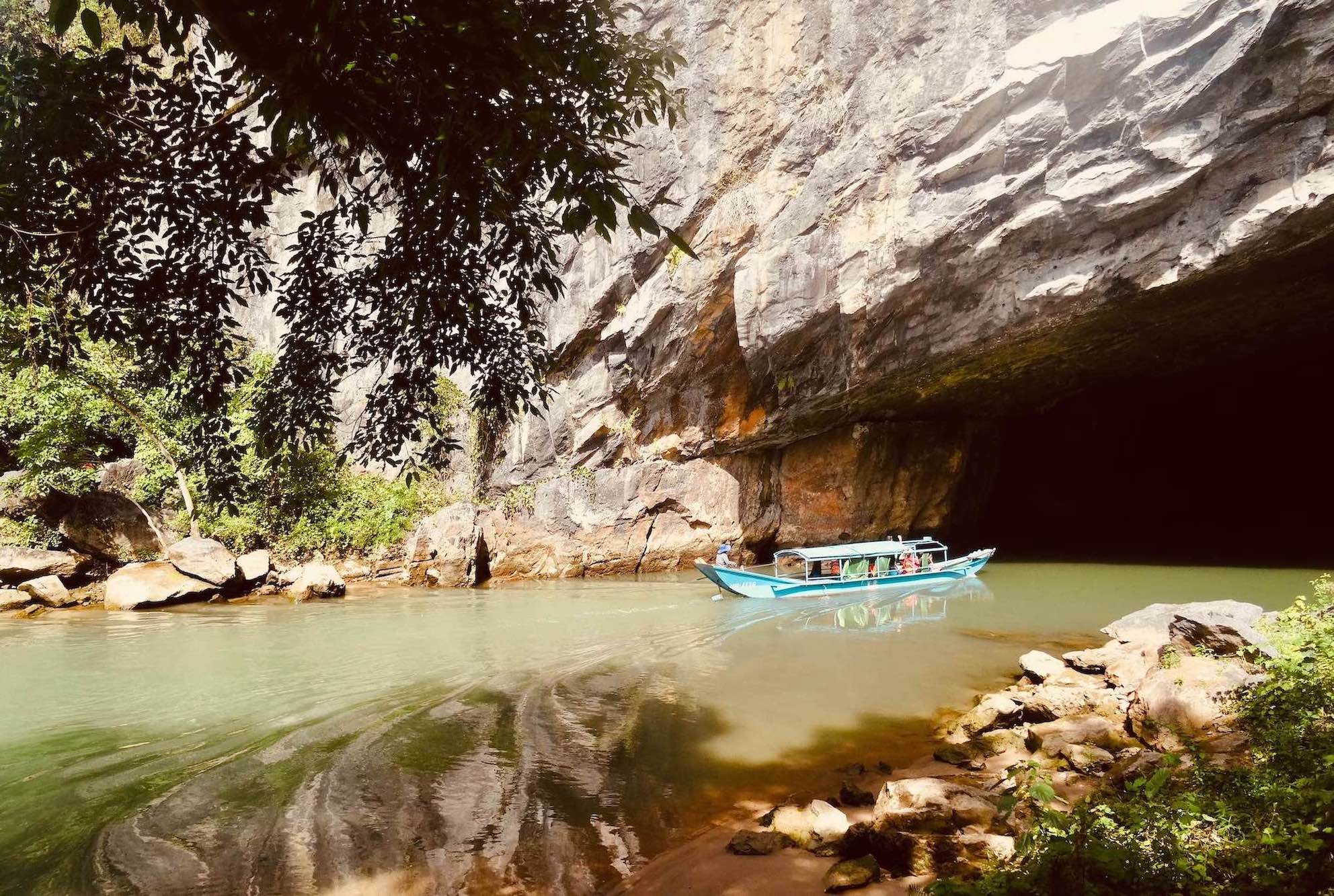 A French Roman Catholic priest by the name of Leopold Michel Cadiere was the first person to professionally investigate the cave in 1899. It was he who first documented its many grottoes and beaches, in addition to several sections of ancient Cham script on the walls. 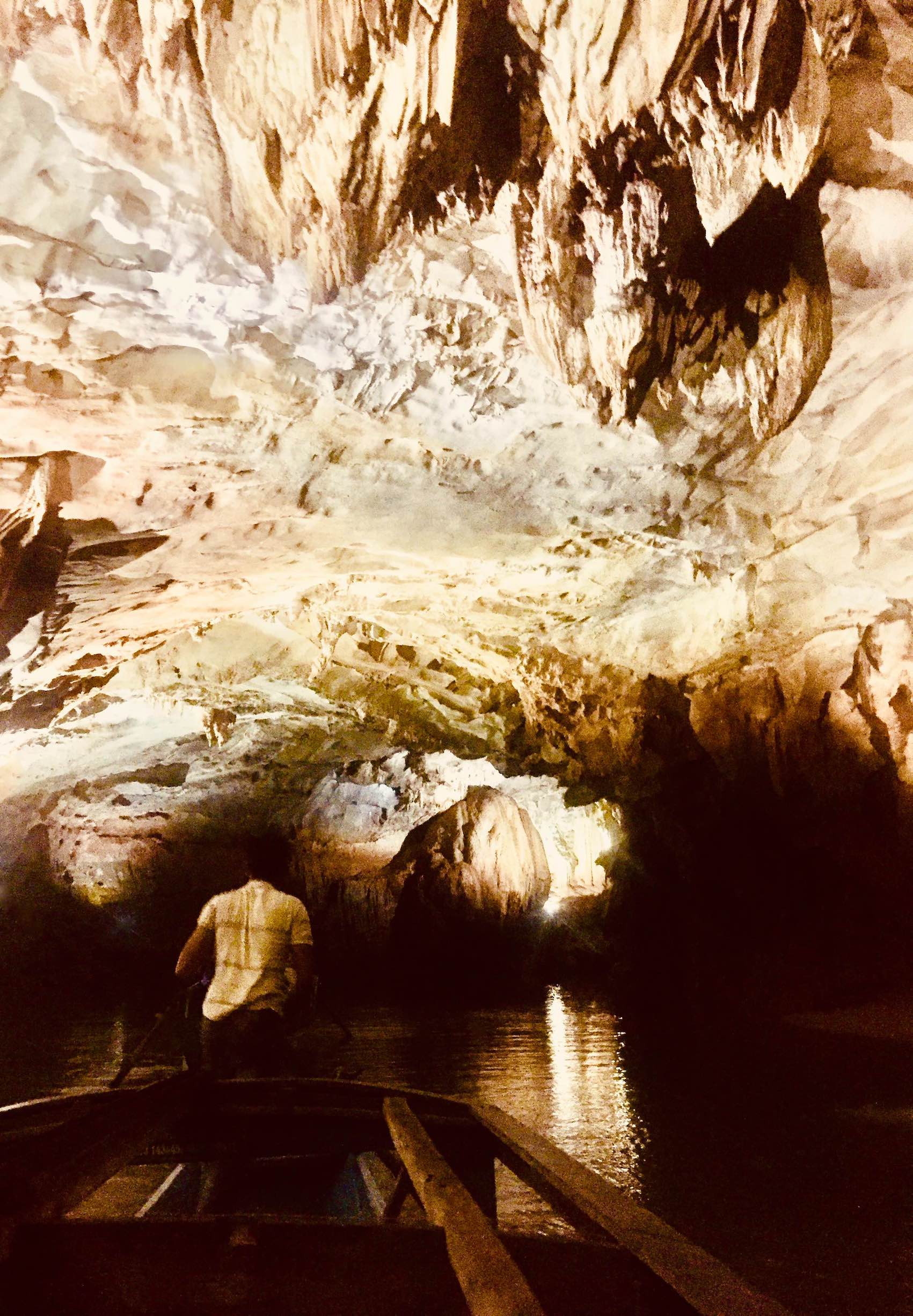 Cadiere, a respected historian, declared Phong Nha “Indochina’s number one cave!” As a result, all manner of experts began arriving to see it for themselves. Eventually, in the 1990s, a team of cave specialists revealed its full length, leading to its opening as a public site.

It was very cool to get a sense of what it must’ve been like for them as we cruised through the dimly lit entrance cavern, our guide’s voice bouncing playfully off the ceiling and rattling around the walls. 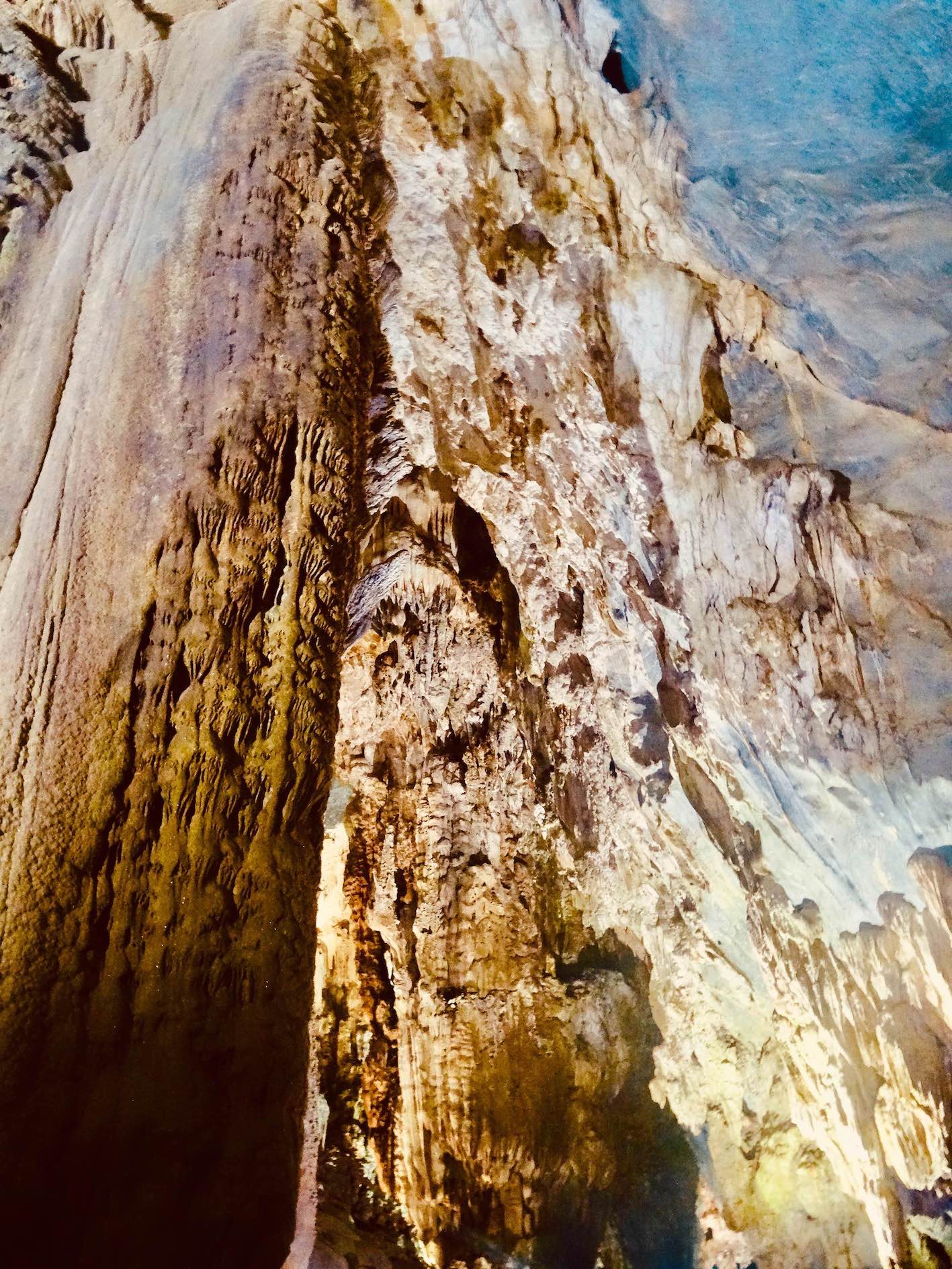 During The Vietnam War the Northern Vietnamese Army (NVA) used the cave for shelter and as a weapon storage warehouse. Much like the amazing cave I’d seen on Cat Ba Island, they also employed it as a hospital. 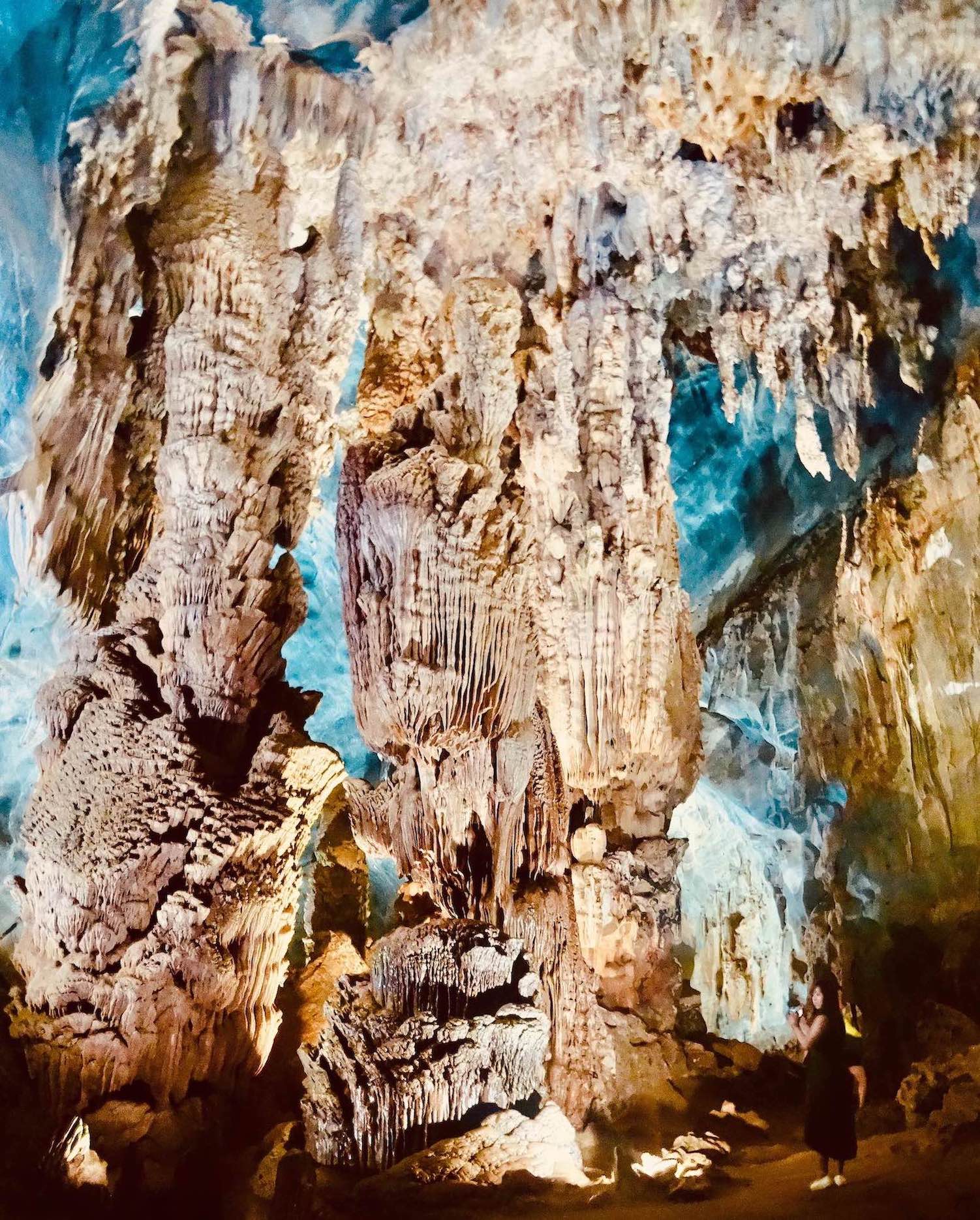 The highlight was getting to jump off on a narrow beach, right in the middle of the cave. With the shifting colours, spooky echoes and dripping rocks, it almost felt as if I’d been transported to another planet. A magical experience from start to finish. 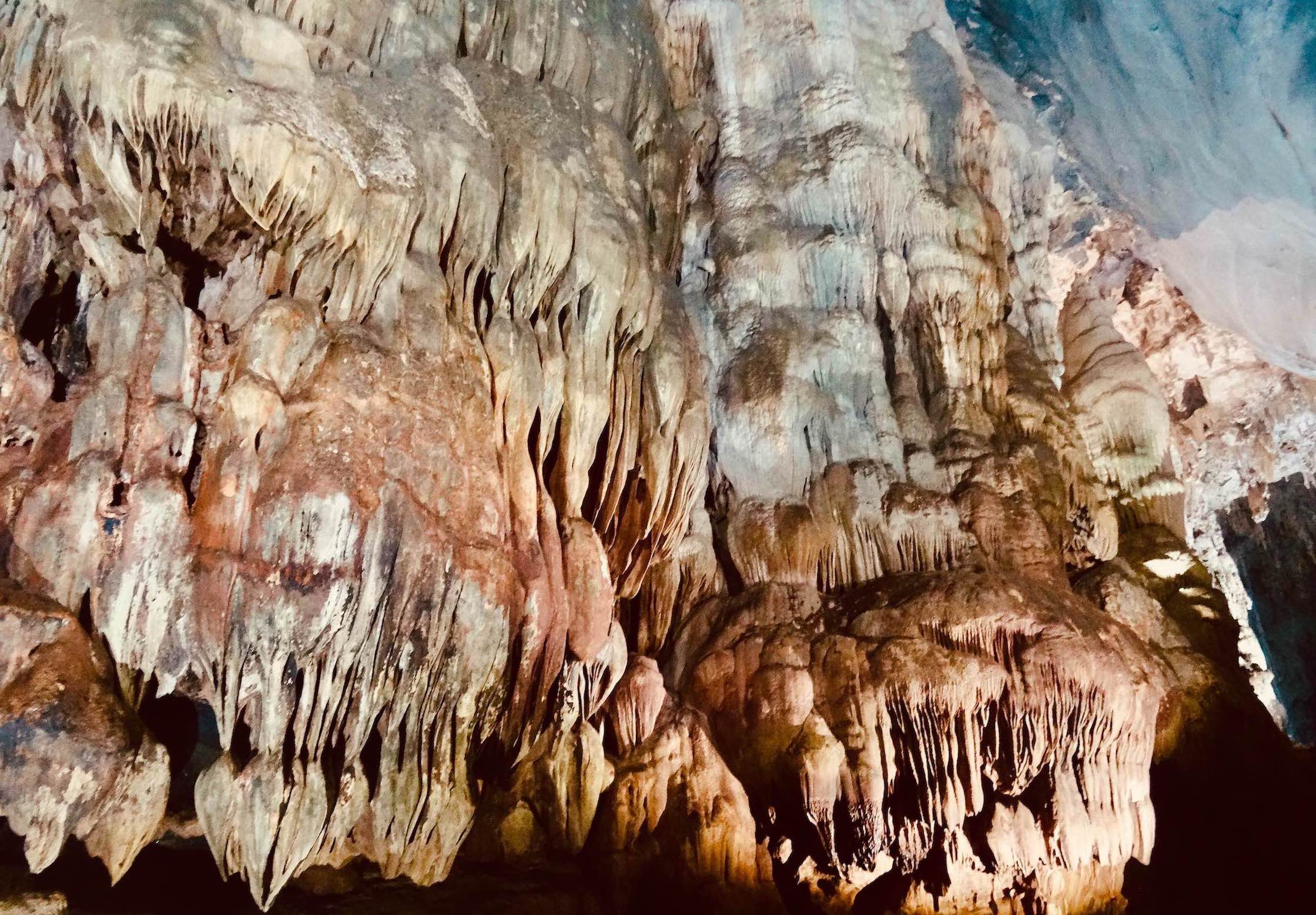 While I undoubtedly didn’t stay long enough in Phong Nha-Ke Bang National Park, I’m so glad that I got to see these two fantastic caves. Apparently there are over 300 caves in the park, with a dozen or so championed as among the most beautiful in the world.

Nam Long Hotel offers various options, where you can mix and match caves as per your preference. I paid 1 million VND (£37/€42/$48) for my day trip, including transport, entrance fees and a basic but tasty lunch at a restaurant between Paradise and Phong Nha.

Like these? Then why not have a leaf through my many articles from across Vietnam.