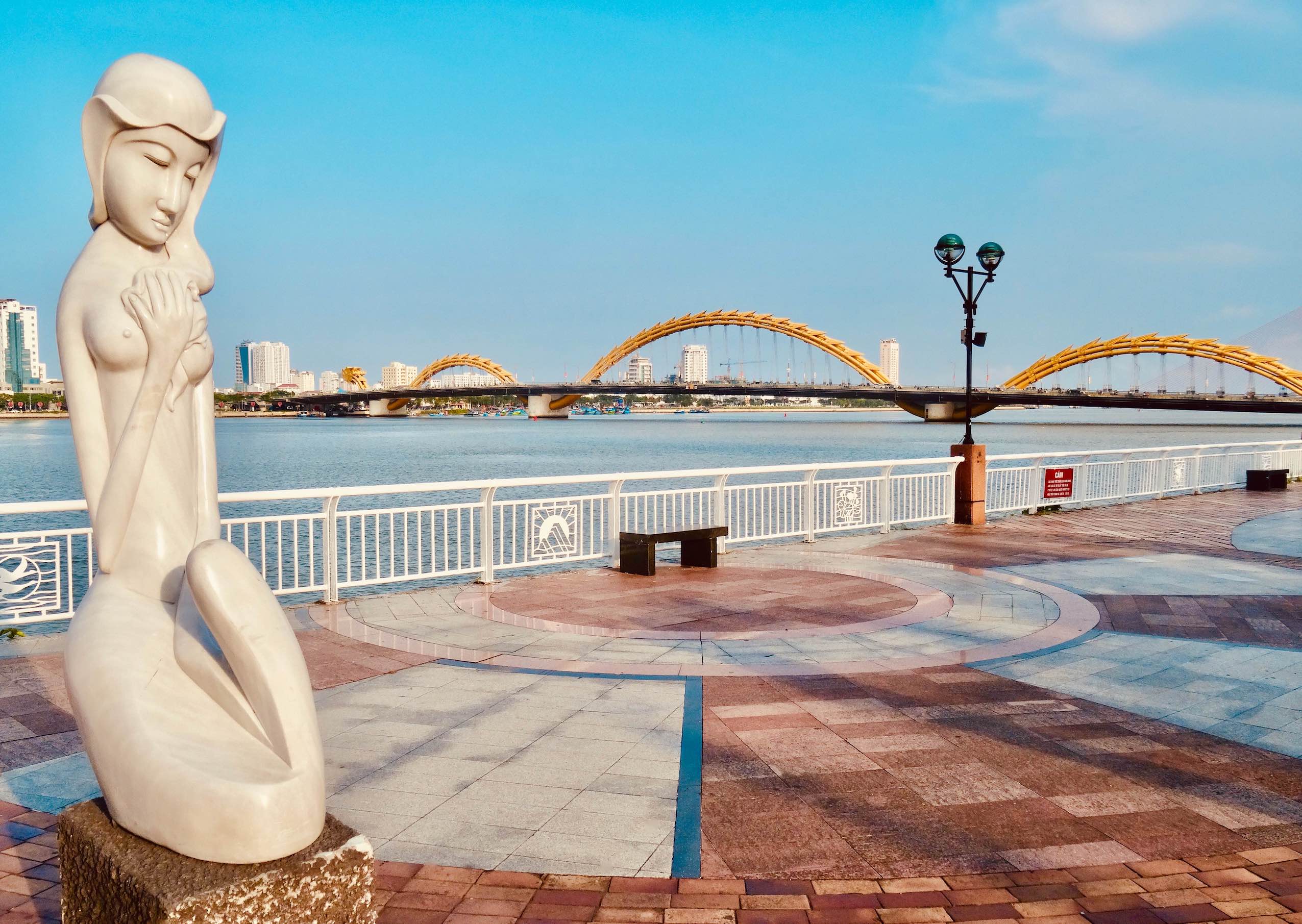 It was my first day in the Vietnamese city of Danang. Having checked into my digs, a Japanese style hostel called Tomodachi House, I wasted no time in heading out into the city. After the sedate charms of Dong Hoi and the imperial delights of Hue, I was definitely happy to be back in the bright lights of a large, modern metropolis. Just to mix things up.

Wherever you’re based in Danang, it won’t be long before you catch sight of Dragon Bridge. I’ve been fortunate enough to see some amazing bridges over the years. But certainly nothing quite like the bridge Danang locals call Cầu Rồng. 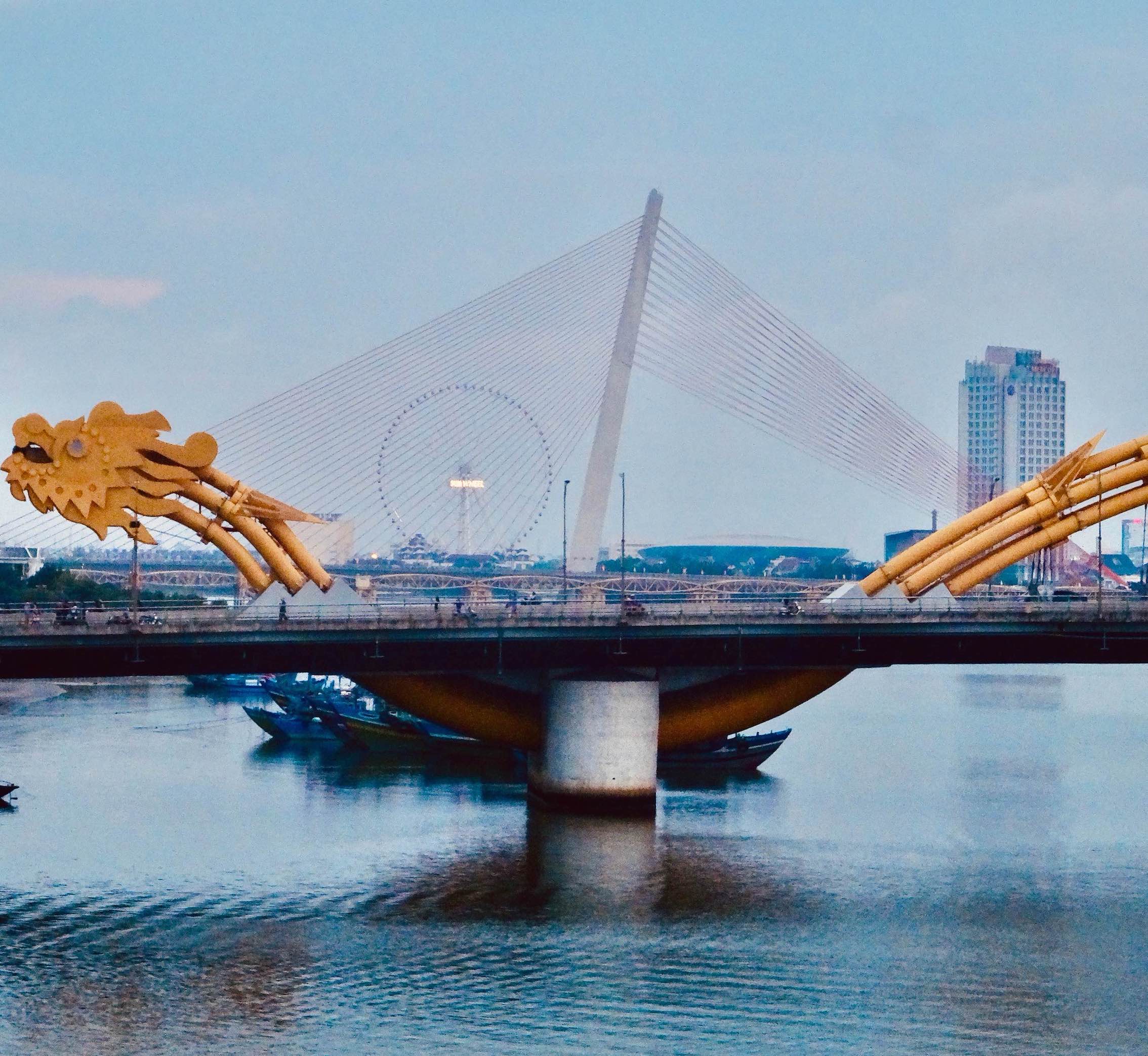 Straddling The Han River, this is Vietnam’s longest bridge at a considerable 666 metres. However, when you first lay eyes on it, one’s initial thought is unlikely to be, wow what a long bridge. But rather, Whoa, there’s a massive dragon gliding across the water.

It’s actually surprising there aren’t more bridges like this. Especially in Asia where people see the dragon as a symbol of power, fortune and nobility. The (now dissolved) structural engineering firm Amman and Whitney designed Dragon Bridge before building work kicked off in the summer of 2009. 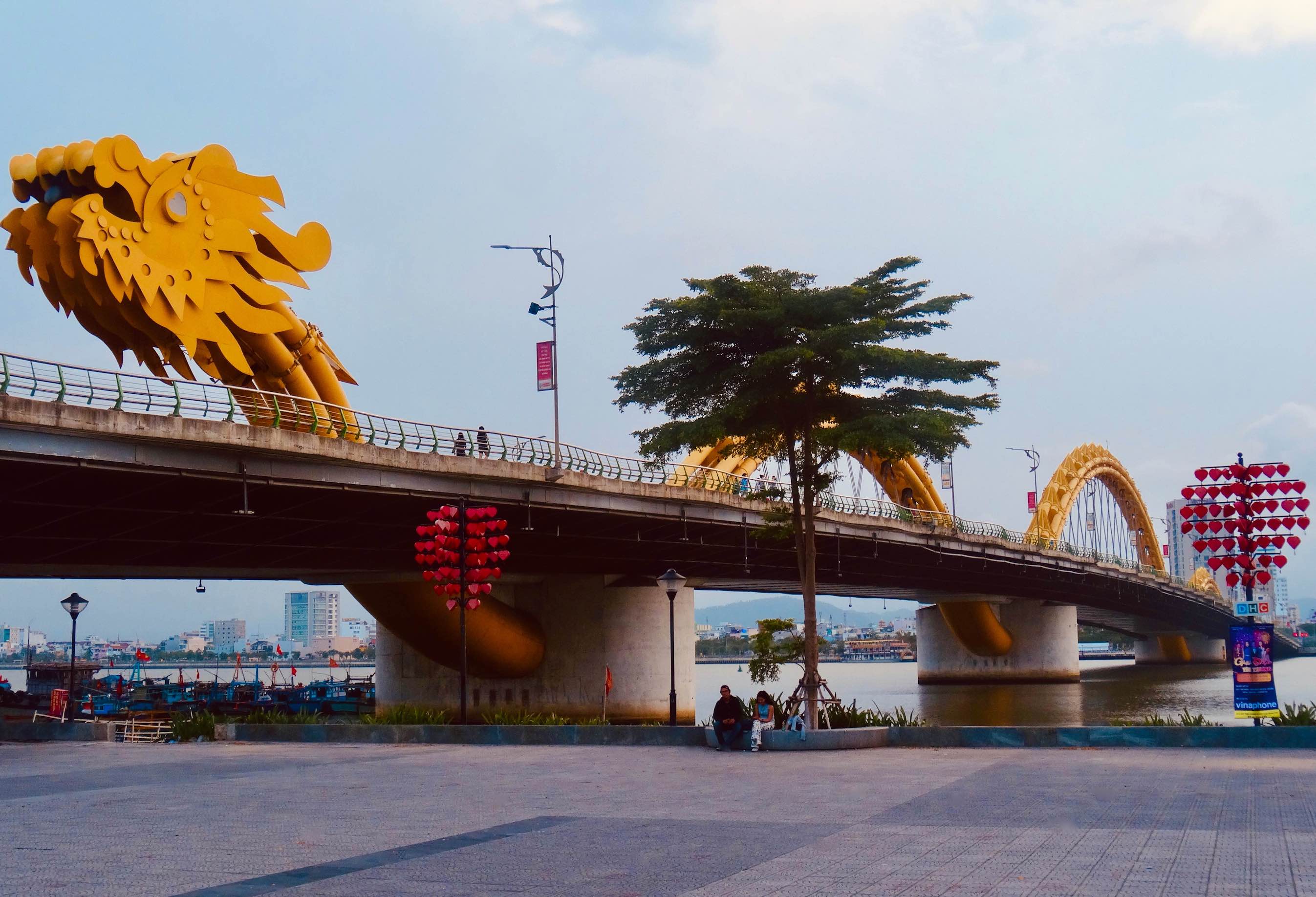 Connecting Danang’s downtown district to its airport and beaches, Dragon Bridge opened to much fanfare on March the 29th, 2013. Attended by city authorities, a regional Vietnamese pop star and thousands of onlookers, the bridge’s opening coincided nicely with the 38th anniversary of the end of the Vietnam War. But boy did it all come at a price. In fact, the final bill came in at an eye-watering 1.5 trillion dong. That’s around 88 million U.S. dollars. 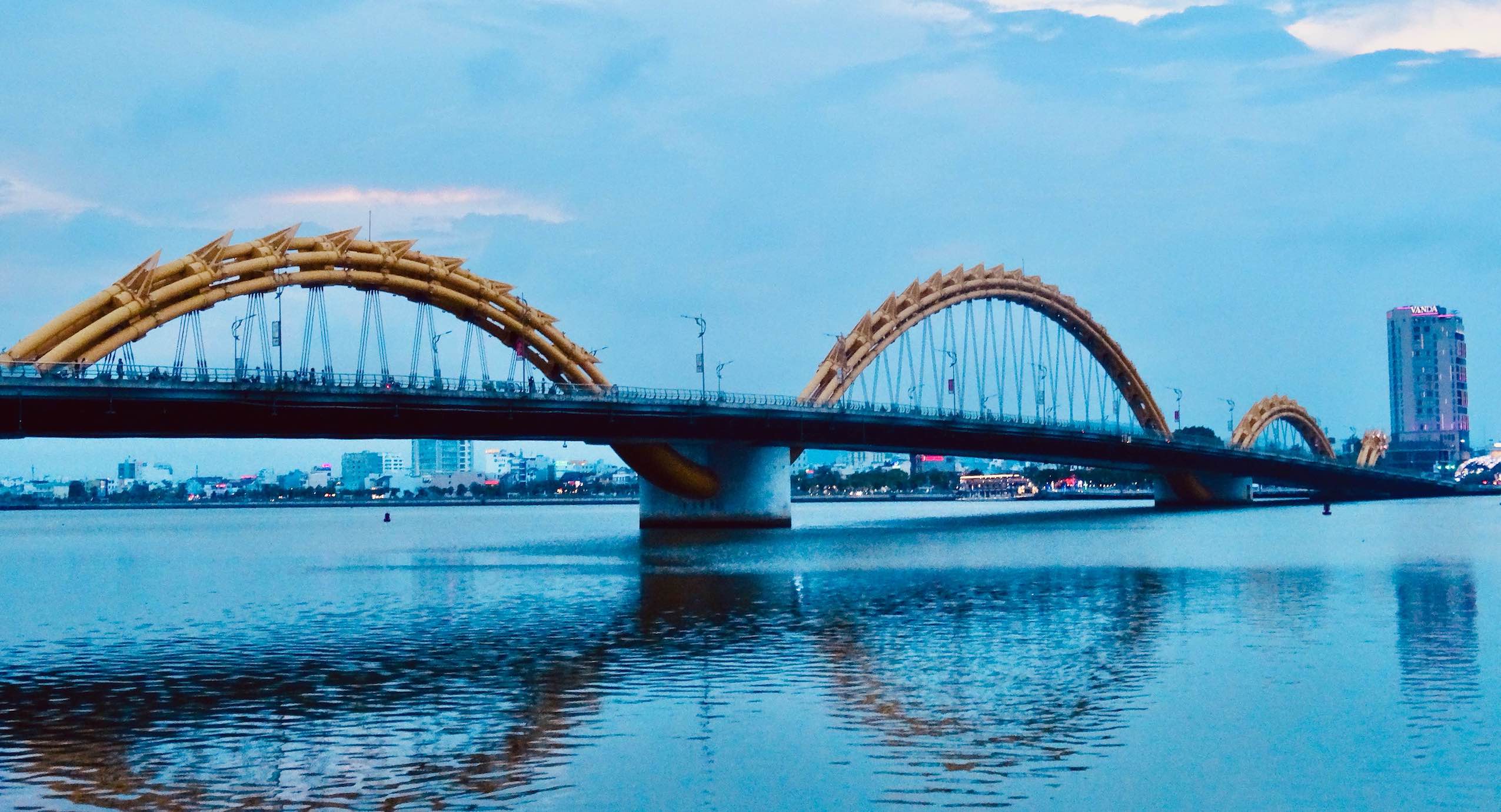 I crossed the bridge perhaps a dozen times during my stay. Indeed it was an essential part of my walking route to the coastline and back. One time, when my legs could quite literally walk no more, I sat watching the dragon’s curved body flashing past me from the comfort of a taxi window.

Dragon Bridge has six lanes for traffic, three in each direction. The pedestrian walkways, meanwhile, are nice and wide and often awash with people taking photos. Naturally I got my own Dragon Bridge shot one afternoon. Although, with the bridge unusually quiet at the time, I had to make do with a somewhat clumsy selfie. 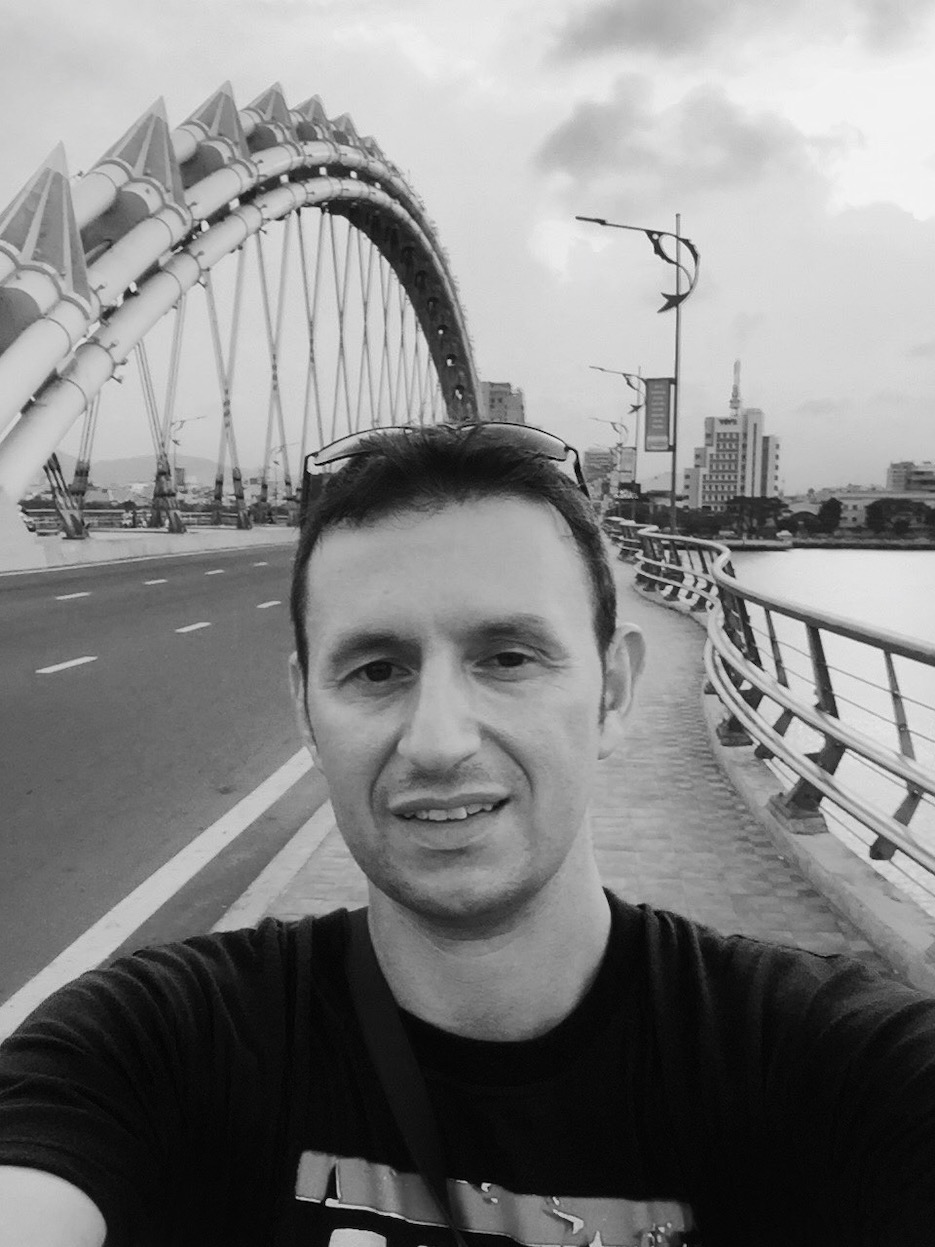 It was fun photographing the different parts of the dragon. The head, I’ve read, was inspired by traditional images of a Lý Dynasty Dragon swooping majestically into the East Sea. 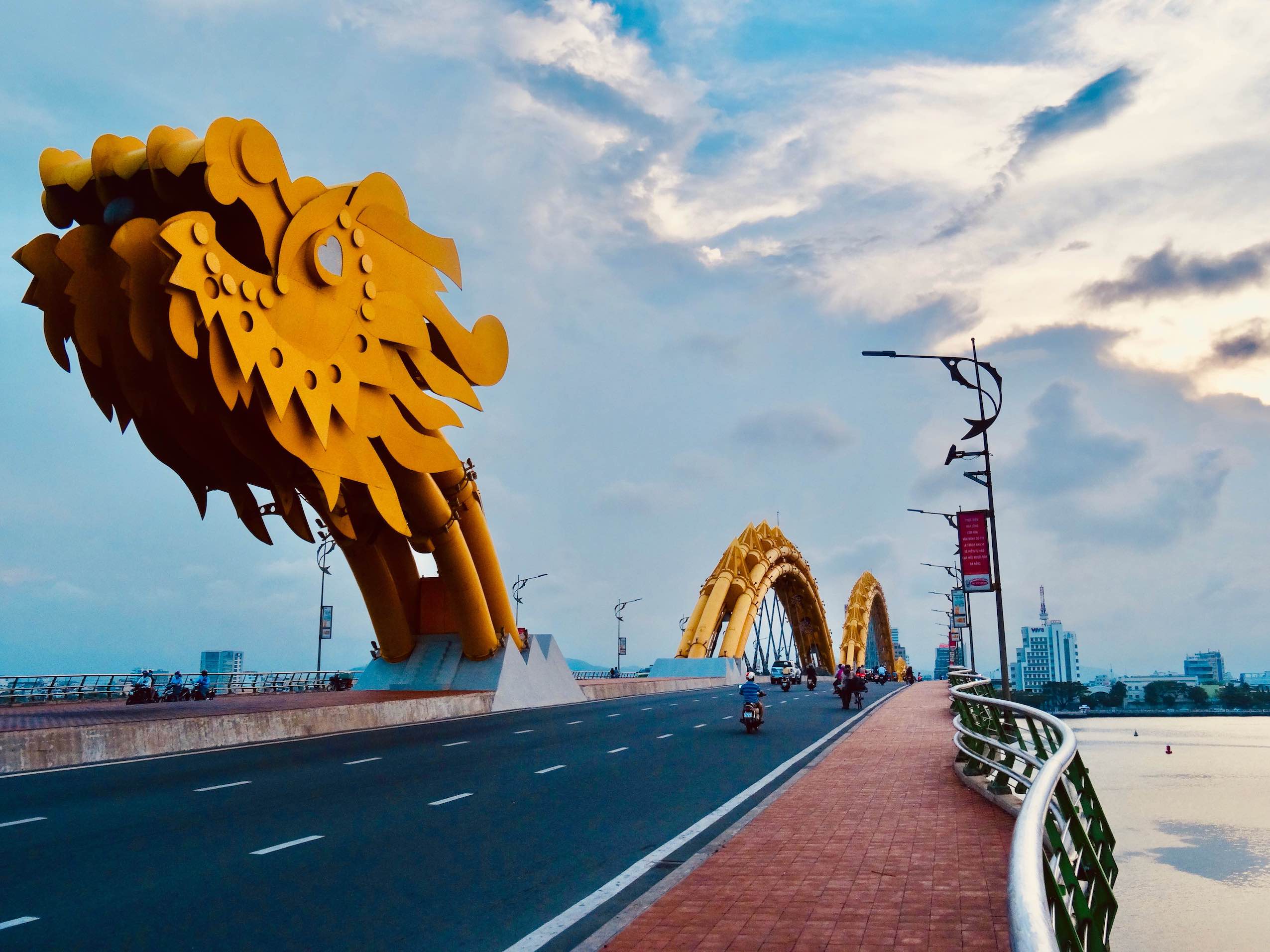 At the other end, the tail represents a blooming lotus flower, a symbol of the Vietnamese countryside. As I recall, I was photographing the tail when a speeding motorcycle skidded onto the walkway near where I was standing.

Off jumped a local man, helmet removed, lighting up a cigarette. And there he stood, leaning against the rail, staring out over The Han River lost in his thoughts. I would’ve loved to have known what he was pondering. 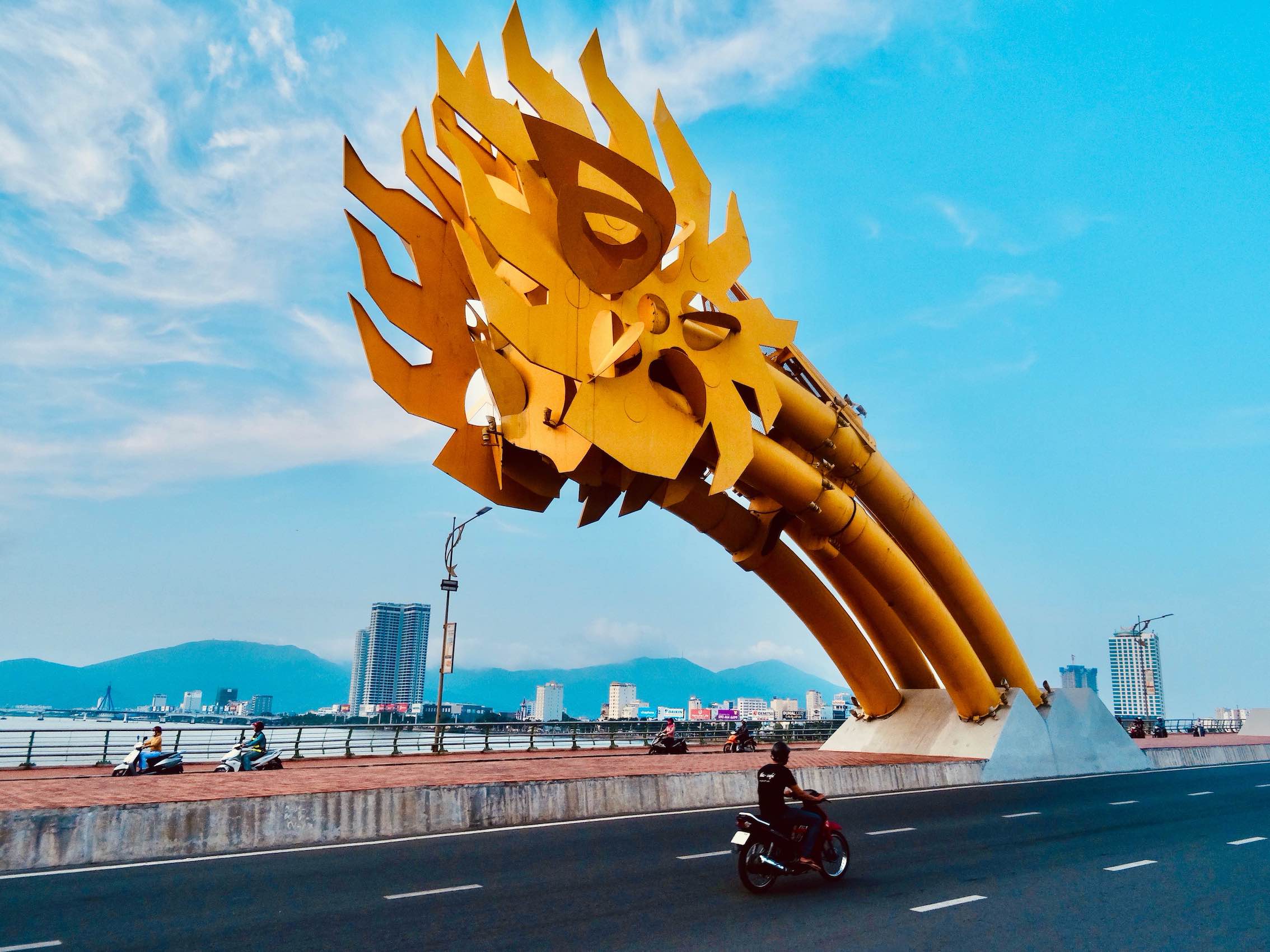 Most bridges come into their own around sunset and after dark. But very few can compete with Dragon Bridge and its dazzling fire and water show. All you have to do is show up at around 20:30 on a Saturday or Sunday. I got to the bridge at around 20:00 to soak up the river views and watch the crowds build. 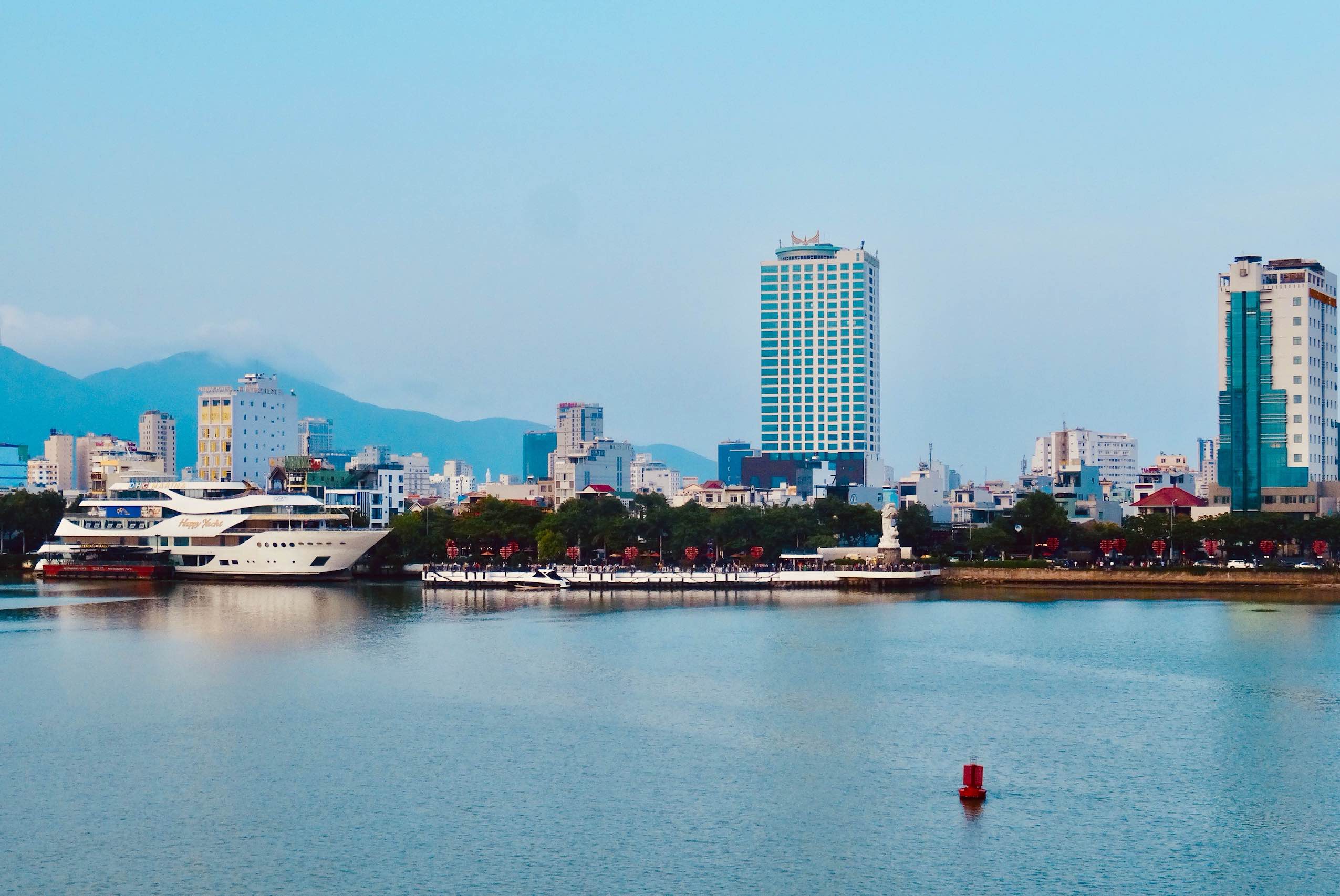 Some groups gather on the river promenade near The Museum of Cham Sculptures. Others, like me, file onto the bridge itself right under the head. In for a penny, in for a pound.

Eventually, at around 20:55, a security team brings the traffic to a standstill in both directions. With anticipation building, an eerie silence descends over the bridge. Until, at 21:00 on the dot, the dragon’s head rattles menacingly before exploding into life with a stunning display of fire breathing.

It’s an undeniably thrilling spectacle, especially as you can feel the heat right on your face as the dragon does its thing. Locals whoop and cheer… tourists take photos and videos… little ones hide behind their mother’s legs.

When the fire antics finally die down, the dragon delights again by spraying a thick sheet of cooling water across the road and pedestrian walkways. It’s a wonderful moment, with people scattering in all directions. The air punctuated with shrieks, gasps and giggles.

Those that hold their ground shelter mobile phones under their t-shirts and hoist backpacks and umbrellas over their heads. It’s a fun, family friendly event that is quite unique and doesn’t cost a penny. Thus if you’re visiting Danang, do come and see Dragon Bridge. And make sure to time your stay to include the weekend fire and water show.