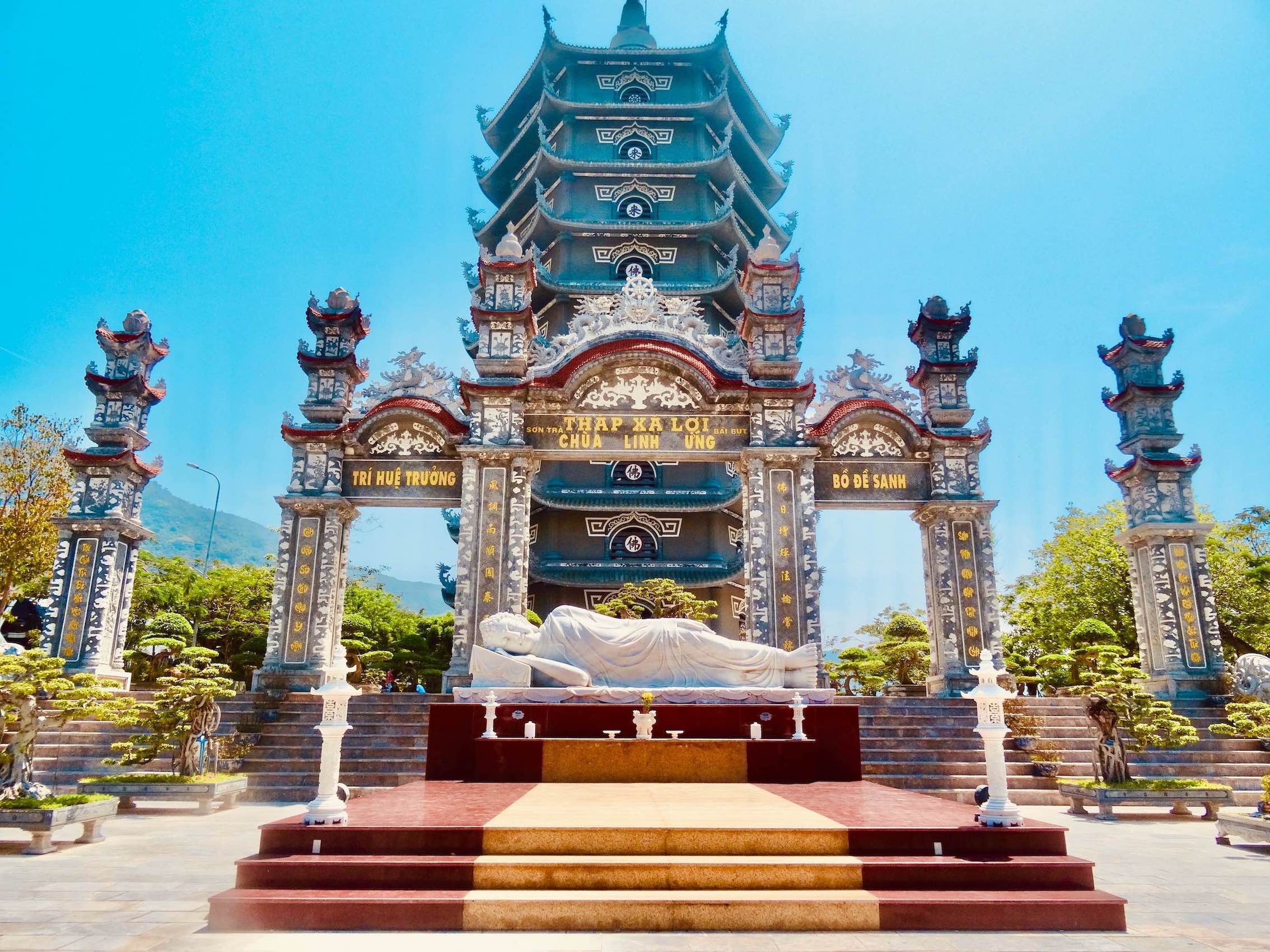 It was a beautifully sunny afternoon in Danang as I left the hostel in pursuit of another mountain adventure. I had already enjoyed a day taking in The Marble Mountains and was curious to see how Son Tra, aka Monkey Mountain, would compare.

Towering 600 meters above sea level, Monkey Mountain sits on the outskirts of Central Danang overlooking the bay and the vast expanse of The South China Sea. From my hostel, it took me an hour just to reach the main mountain road. That’s through the city streets, over Dragon Bridge and along the coastline, before branching off onto a twisting, steep mountain path. 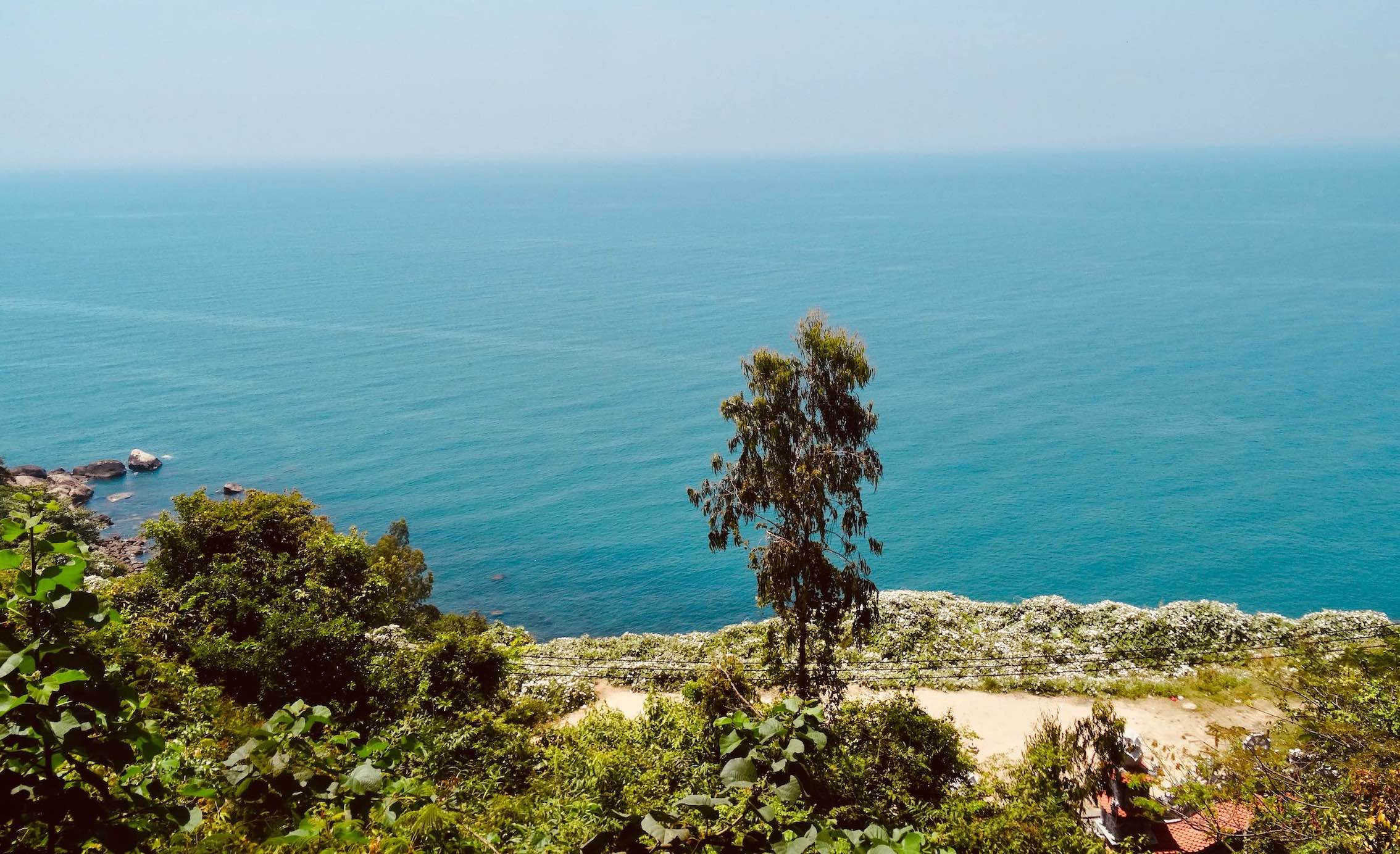 I’m not gonna lie, it was really hard work getting up the hill. Moreover, the sun’s intensity had ramped up a couple of notches. Hence I soon found myself reduced to a hot, sweaty panting mess. But hey, the ever-improving views made it all worthwhile.

Son Tra has of course been around for thousands of years. A giant, green screen providing protection to its surrounds from aggressive sea storms and devastating typhoons. 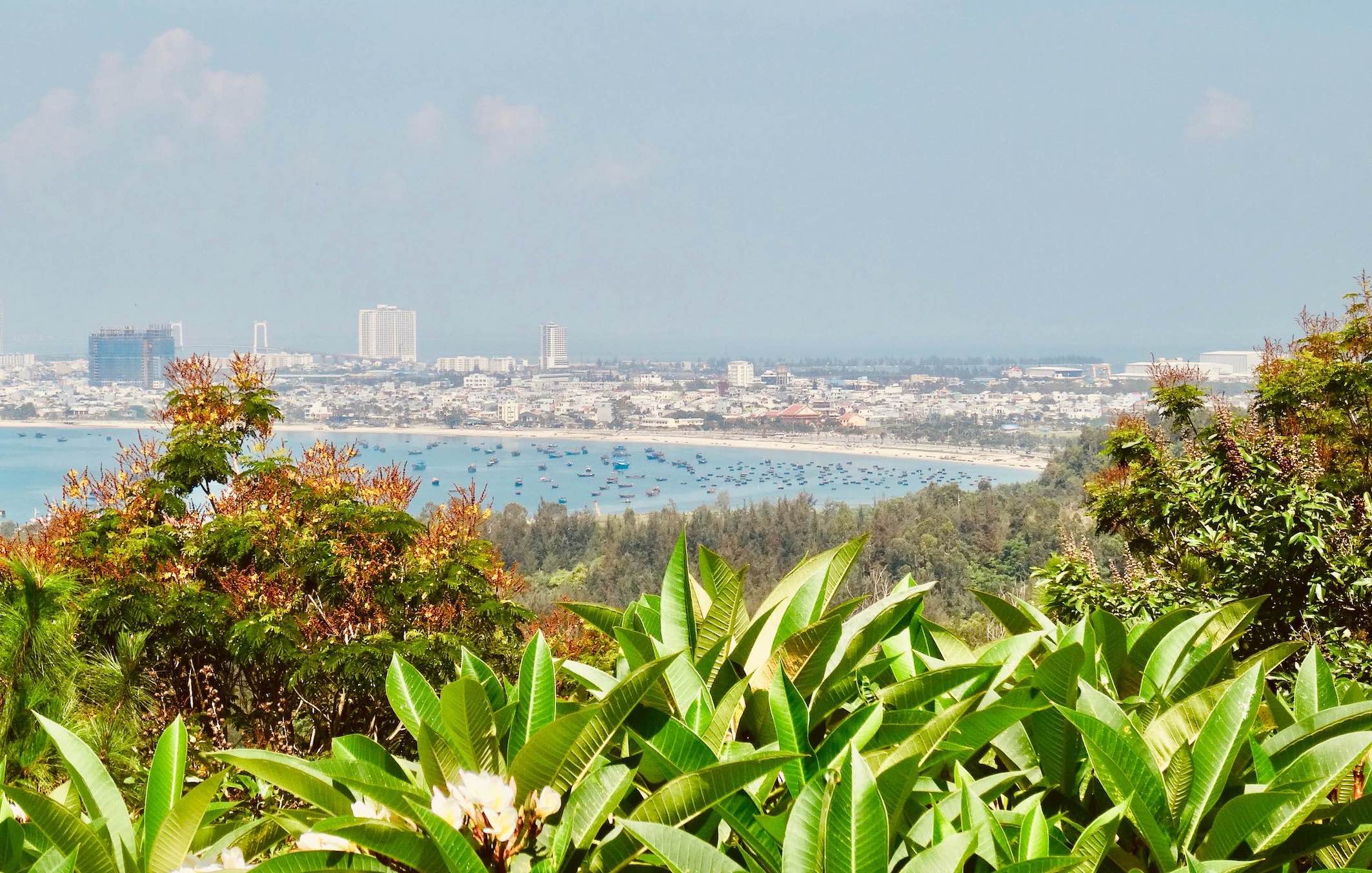 But it wasn’t until the 19th century that the French began developing the land. First came roads and residential compounds for high ranking military officers and government officials. Later, they built a seaport, cemeteries, a lighthouse and a bamboo garden. They called the mountain area Tien Sa (Angel’s Landing), which is now the name of a nearby harbour. 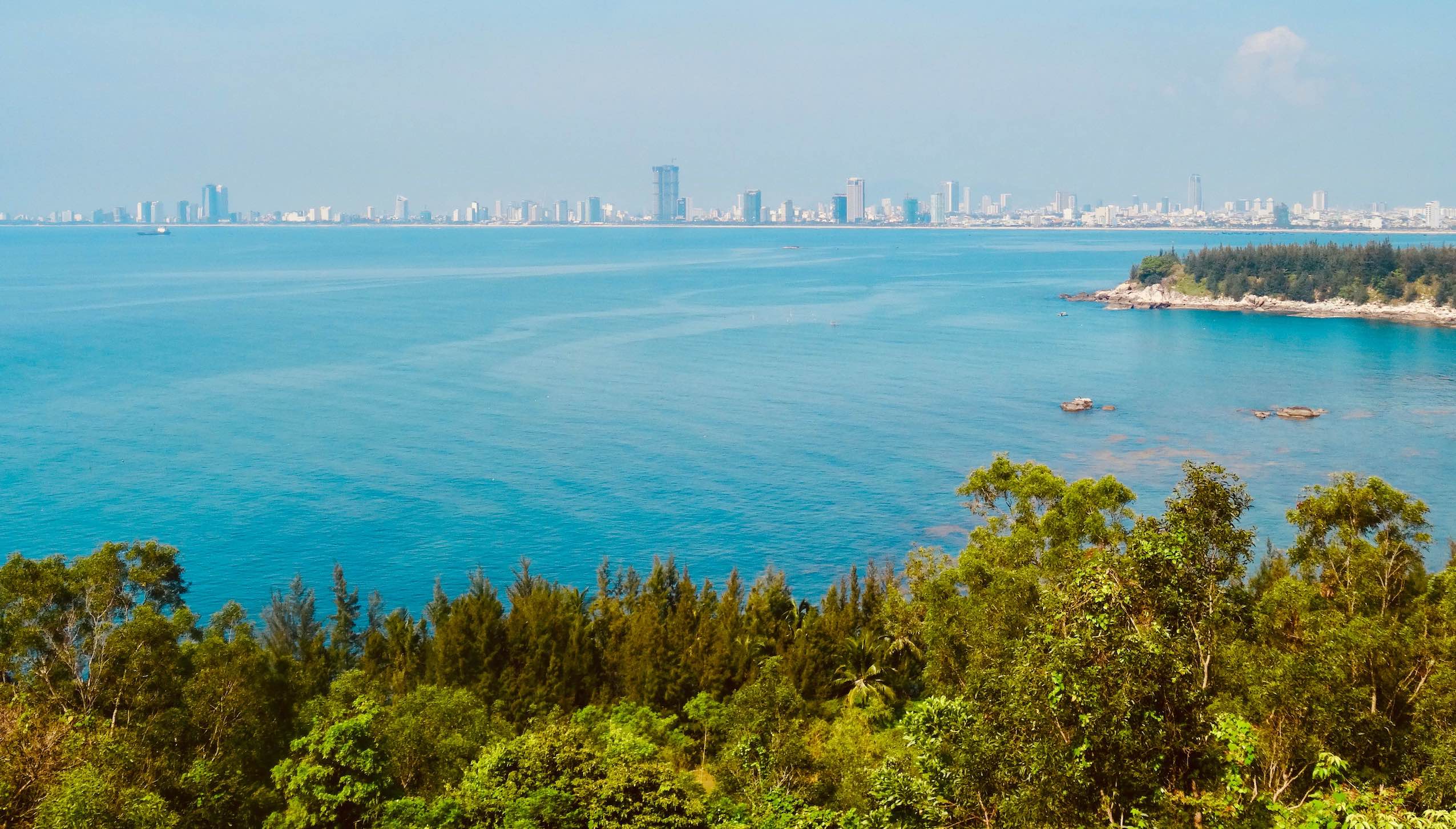 During the Vietnam War the Americans built a US Air Force and Marine base here. Opened in 1962, they established a signals intelligence centre (SIGNT) just south of the main peak in order to intercept North Vietnamese communications. The base also served as a defence point for the mountain and the city of Danang. 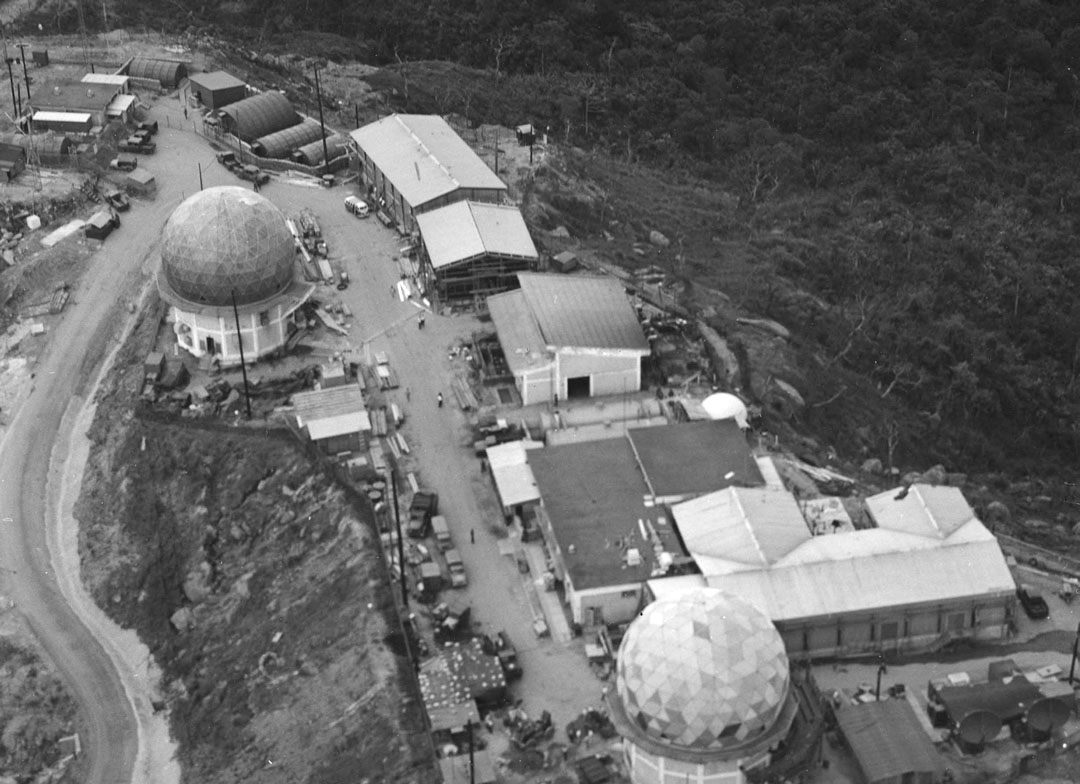 In March 1968 Son Tra was the scene of high drama when a US F-8 Crusader crashed into the mountain. Details of the crash are vague, but it seems the pilot (Lieutenant Jerry Weber) survived, while the plane’s fuselage ended up embedded into the rock.

Consequently, it became an iconic photo spot for all serving soldiers based at Monkey Mountain. Today a few abandoned buildings remain, though much of the area is sealed off from public access. 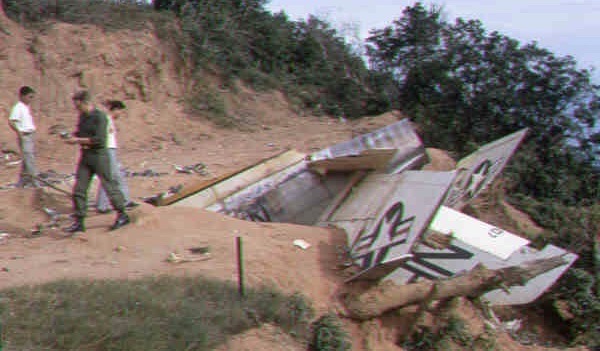 That afternoon my sightseeing was much more sedate. I was making my way to Linh Ung Pagoda, a sprawling Buddhist complex unveiled in 2010. The compound stands on the site of an 18th century shrine constructed in the days of Emperor Minh Mang. 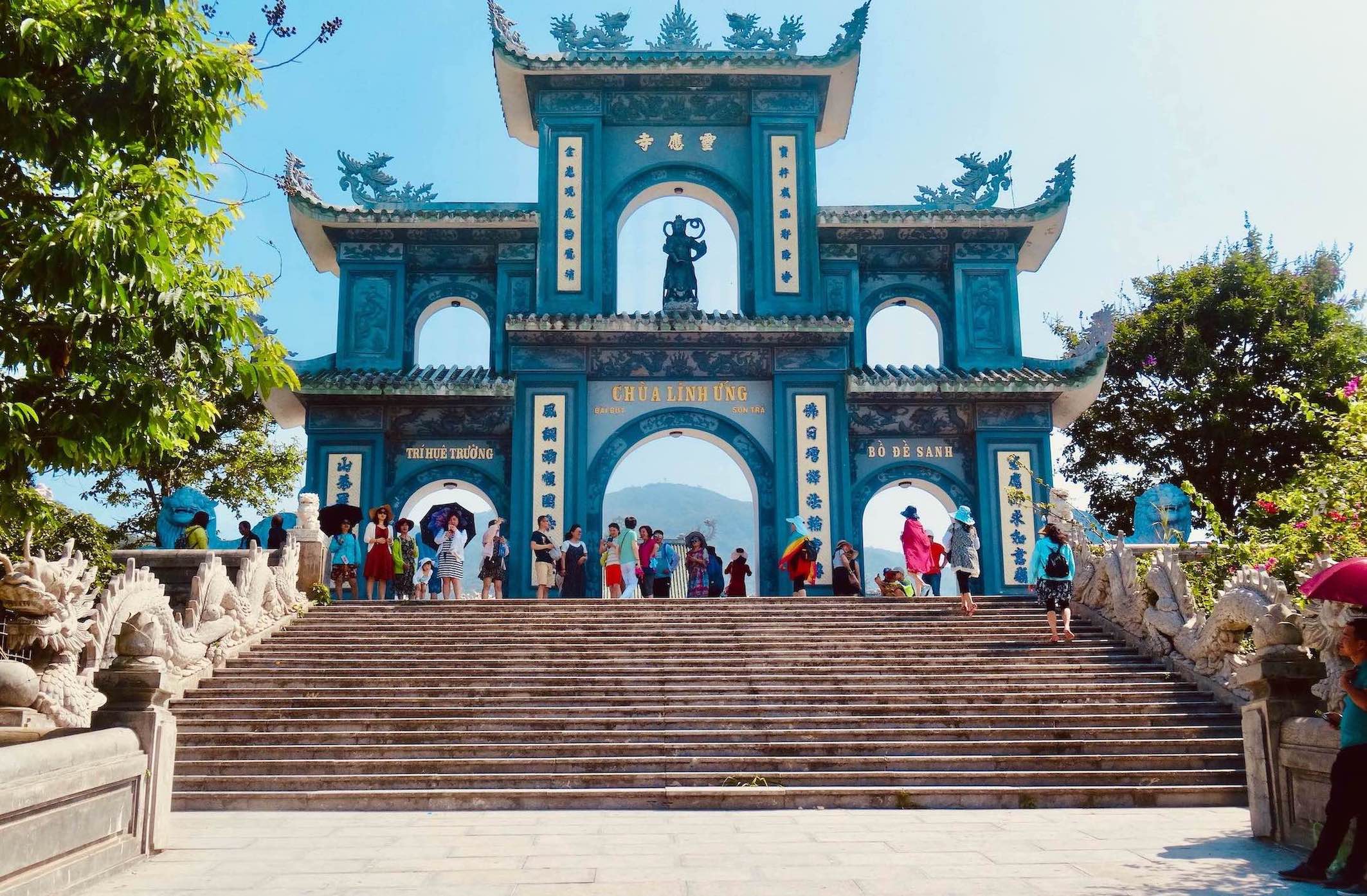 The legend behind the original shrine is a familiar one for anyone who’s been around the Asian block. They say its inspiration came from a mysterious Buddhist statue that washed up on the beach below one day. In awe, the villagers built the shrine in its honour, believing that it would protect them from harsh weather. 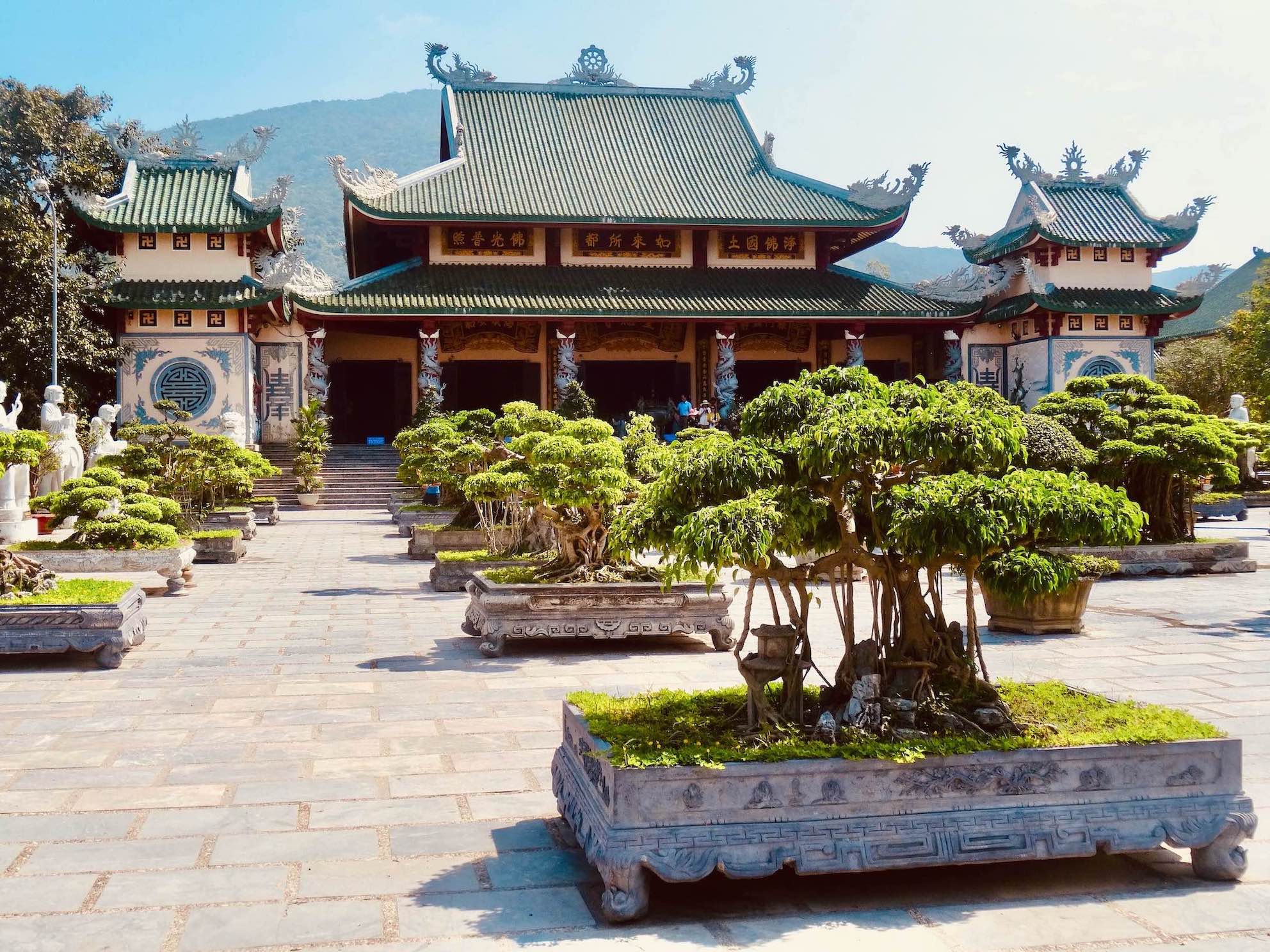 The pagoda’s huge main courtyard is home to potted rocks and gorgeous bonsai trees. There are also statues honouring the Eighteen Arhats, the original followers of Lord Buddha.

The dude pictured below is Khang Mon La Han, supposedly one of the eighteen. But details on him are thin on the ground and his name doesn’t even register among the lists of arhats I found. Furthermore, even a local guide couldn’t help me out. “Mm, not sure” he said, “arhats had many names”. Buddhism be confusing y’all. 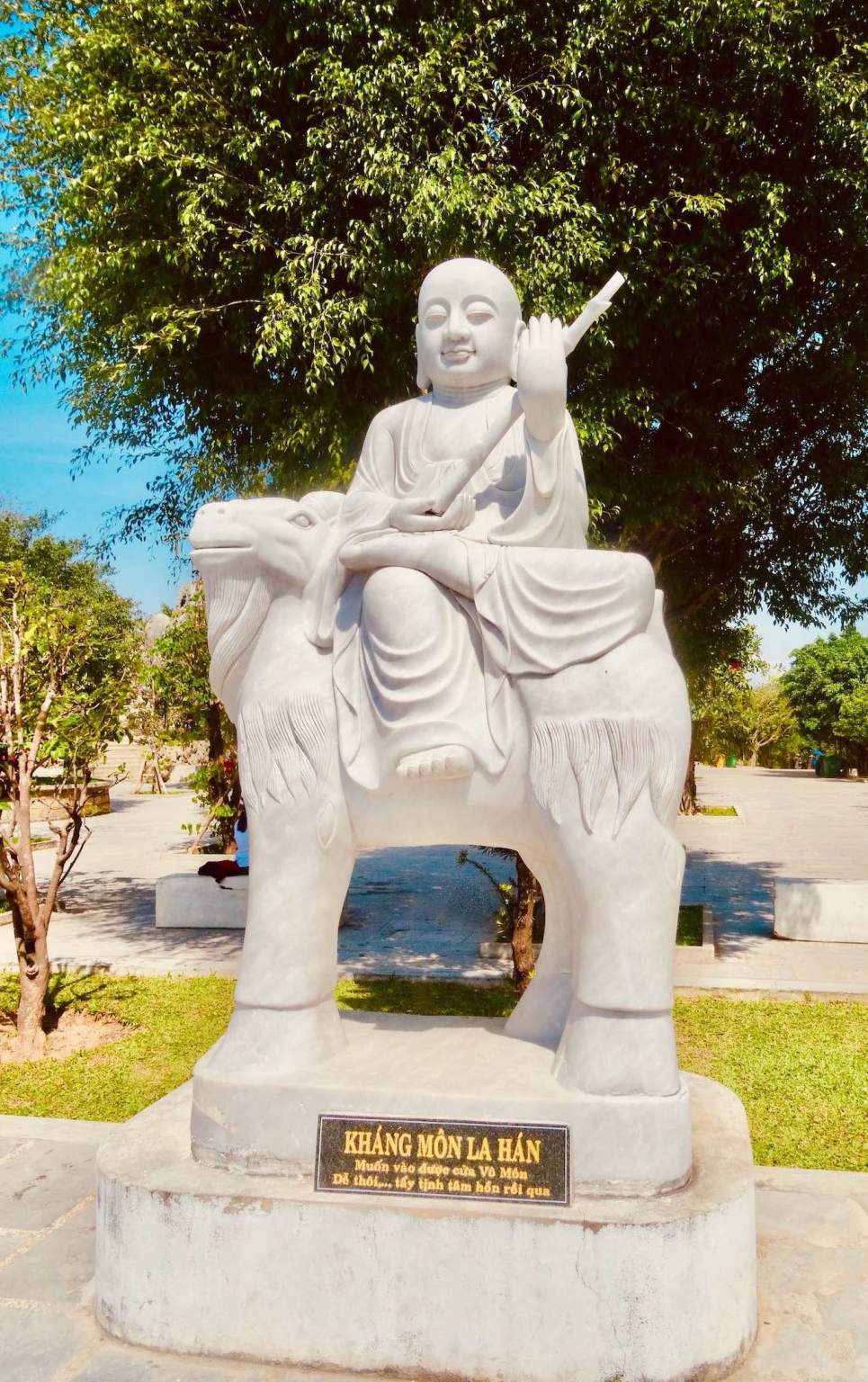 It was busy inside the main temple, with dozens of people praying, chanting and burning incense sticks at the main altar. Frankly, the scene was a typical one and kinda blended in with the countless Buddhist altars I’ve seen across Asia. 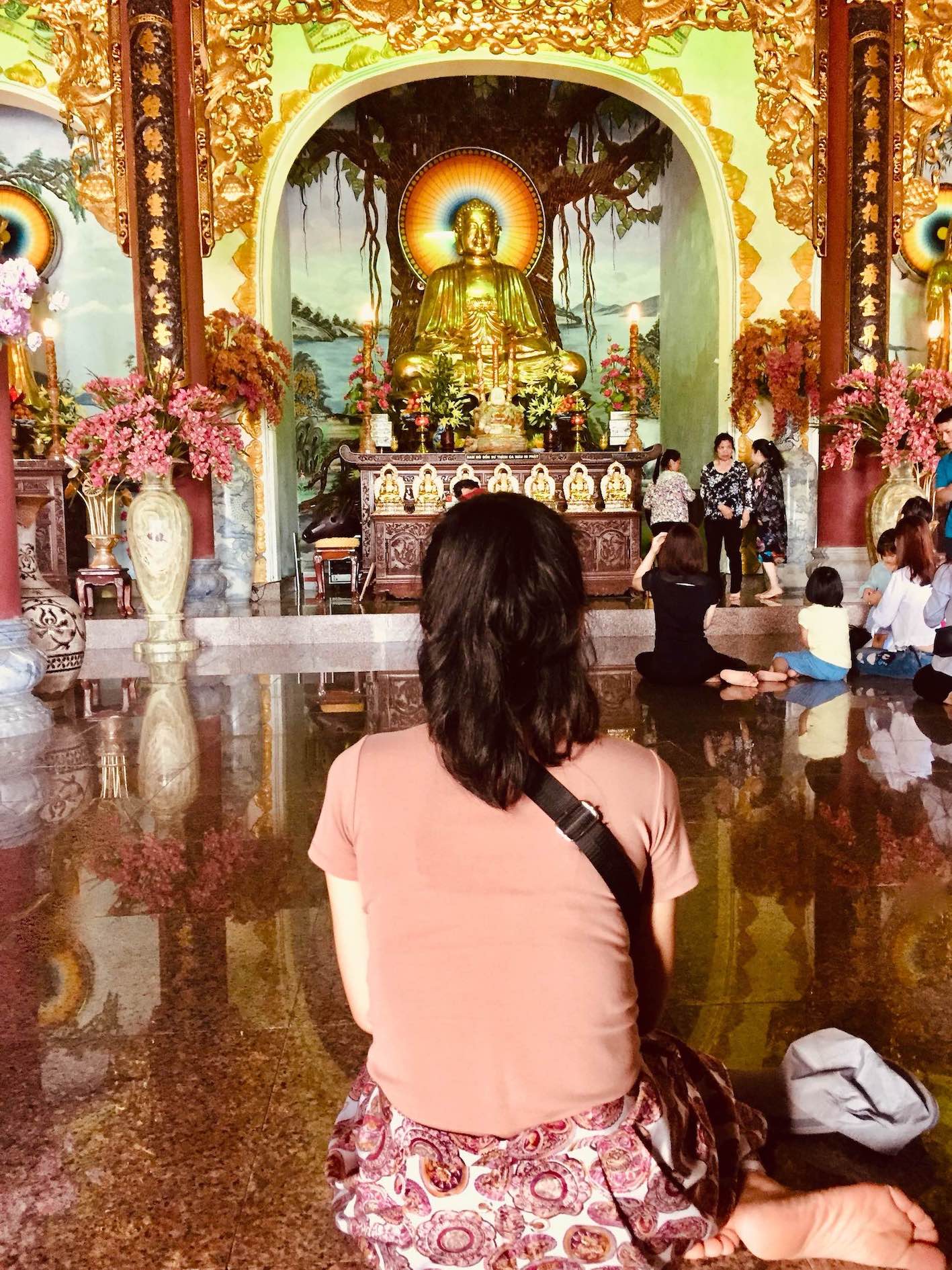 As a result, I found myself focusing on the giant incense burner at the main doors. And what a fine view you get between its sculpted handles back across the courtyard to the entrance arch. You really get a sense of scale from what is the largest pagoda in central Vietnam. 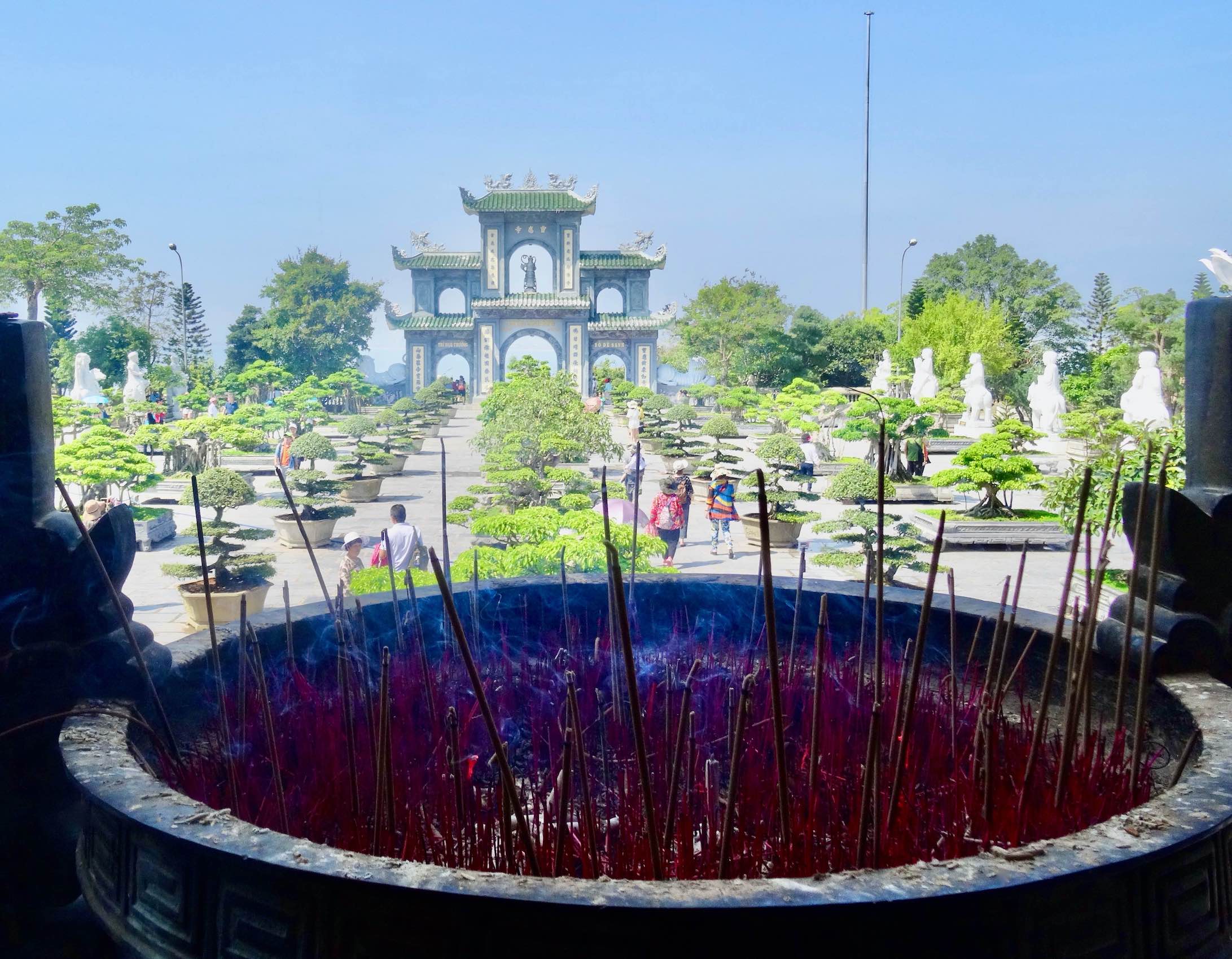 Linh Ung’s undisputed centrepiece is the towering white statue of Lady Buddha, the Goddess of Mercy. This was the 67 metre-tower I’d spied on the other side of the bay from My Khe Beach during my explorations of The Danang Coastline.

The lady, calmly looking out to sea, is Vietnam’s tallest Buddhist statue. She has 17 floors, each dedicated to a different Buddha. Visitors who make the effort to climb them are rewarded with fine sea views from a balcony at the top. Unfortunately for me, there was no interior access that day. Just my luck. 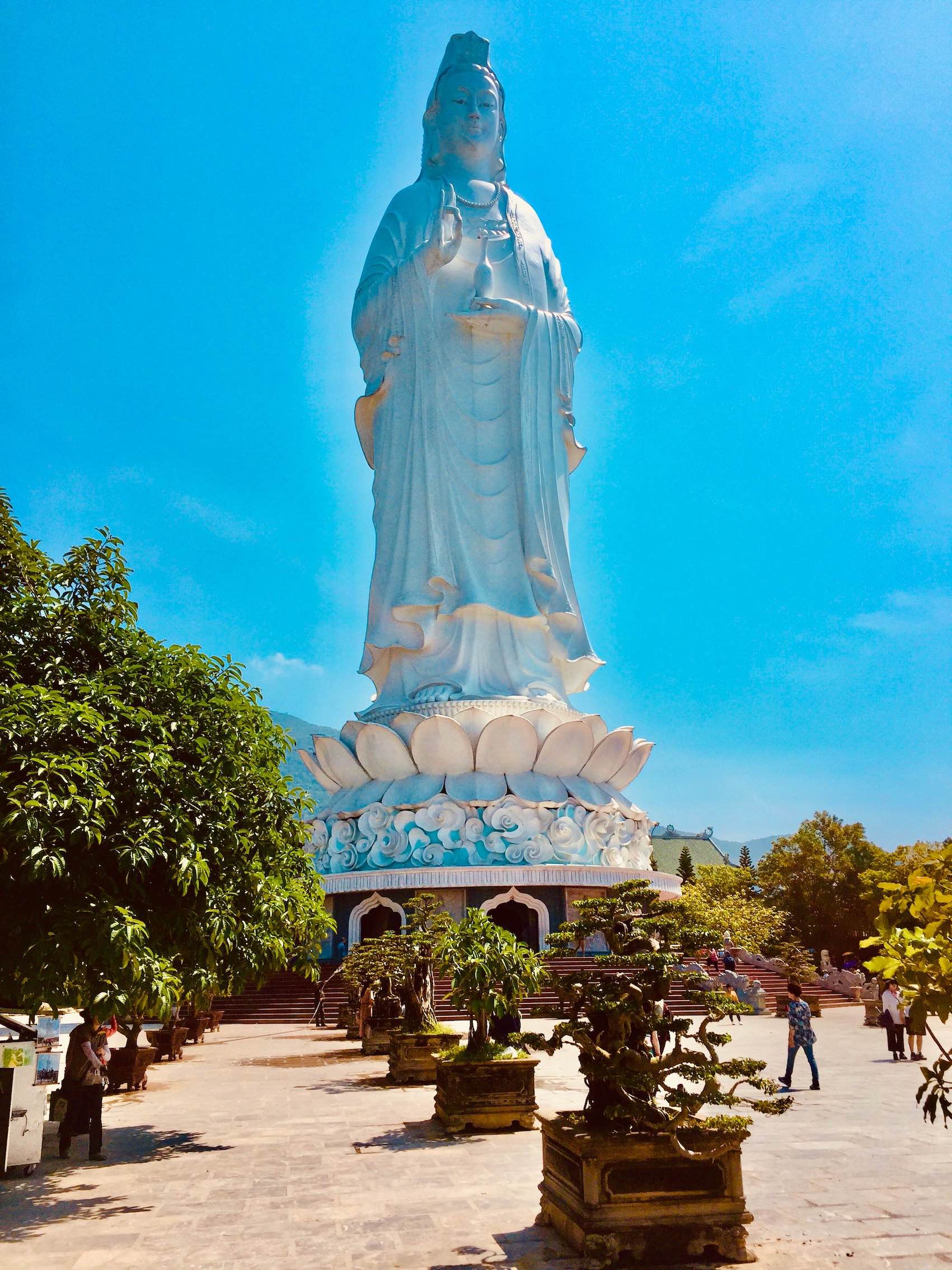 Elsewhere, I marvelled at the impressive Relics Tower, home to over 200 antique Buddha images gathered from around Vietnam. And then I was cursing all over again when I realised that everything above the ground floor was also shut up for the day. It was starting to feel like a conspiracy. 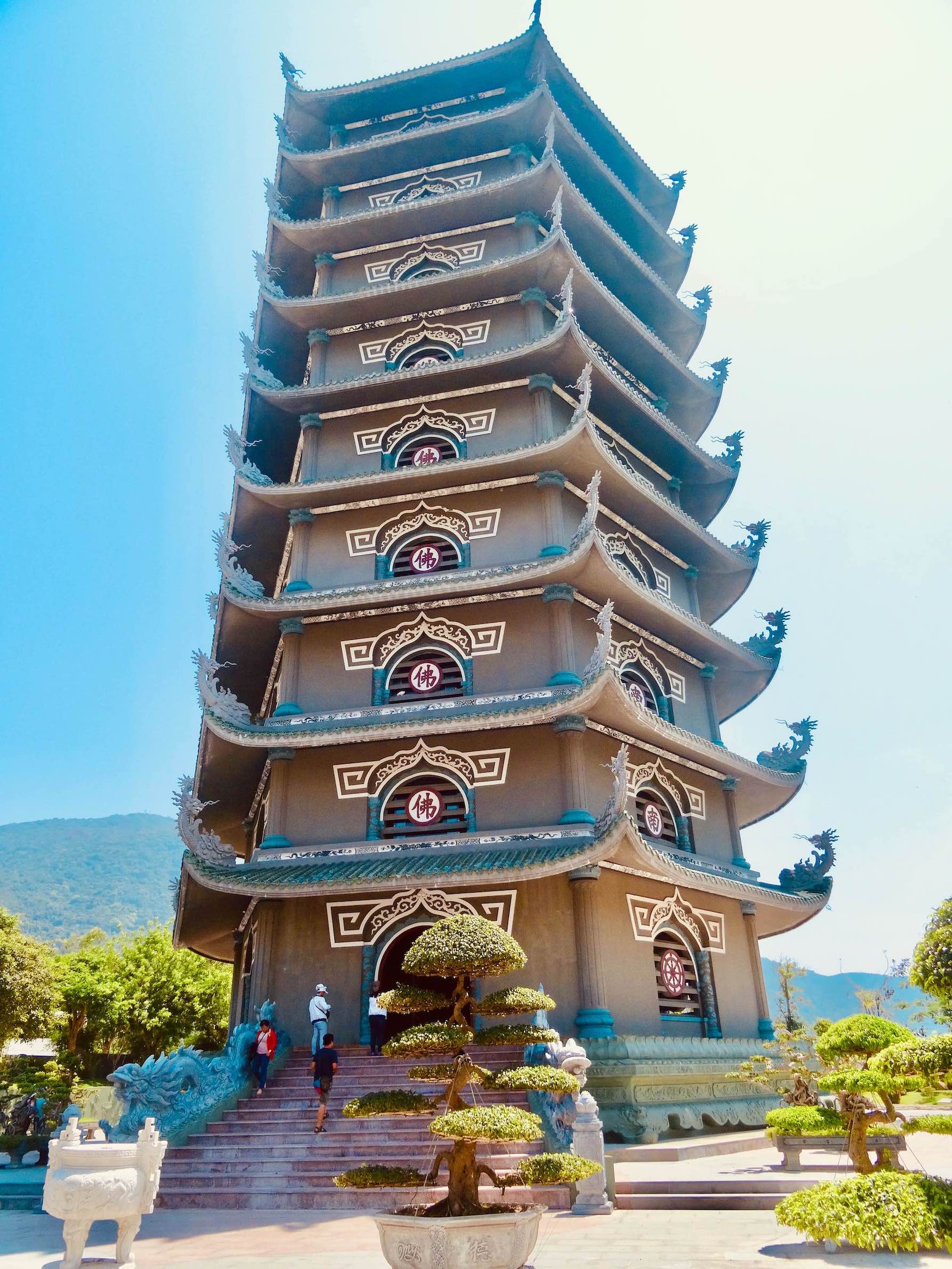 The further you progress the quieter it gets. If there’s one thing I’ve learned about tourists over the years it’s that people are so lazy. They come, look inside the main altar, grab a few shots of Lady Buddha and they’re gone.

At the back of the complex, towards the nature trails that lead further up the mountain, I stumbled upon a perfectly peaceful sculpture park. There were kneeling mothers, waving children and grazing deer. And not a word of explanation anywhere to illuminate any of it. 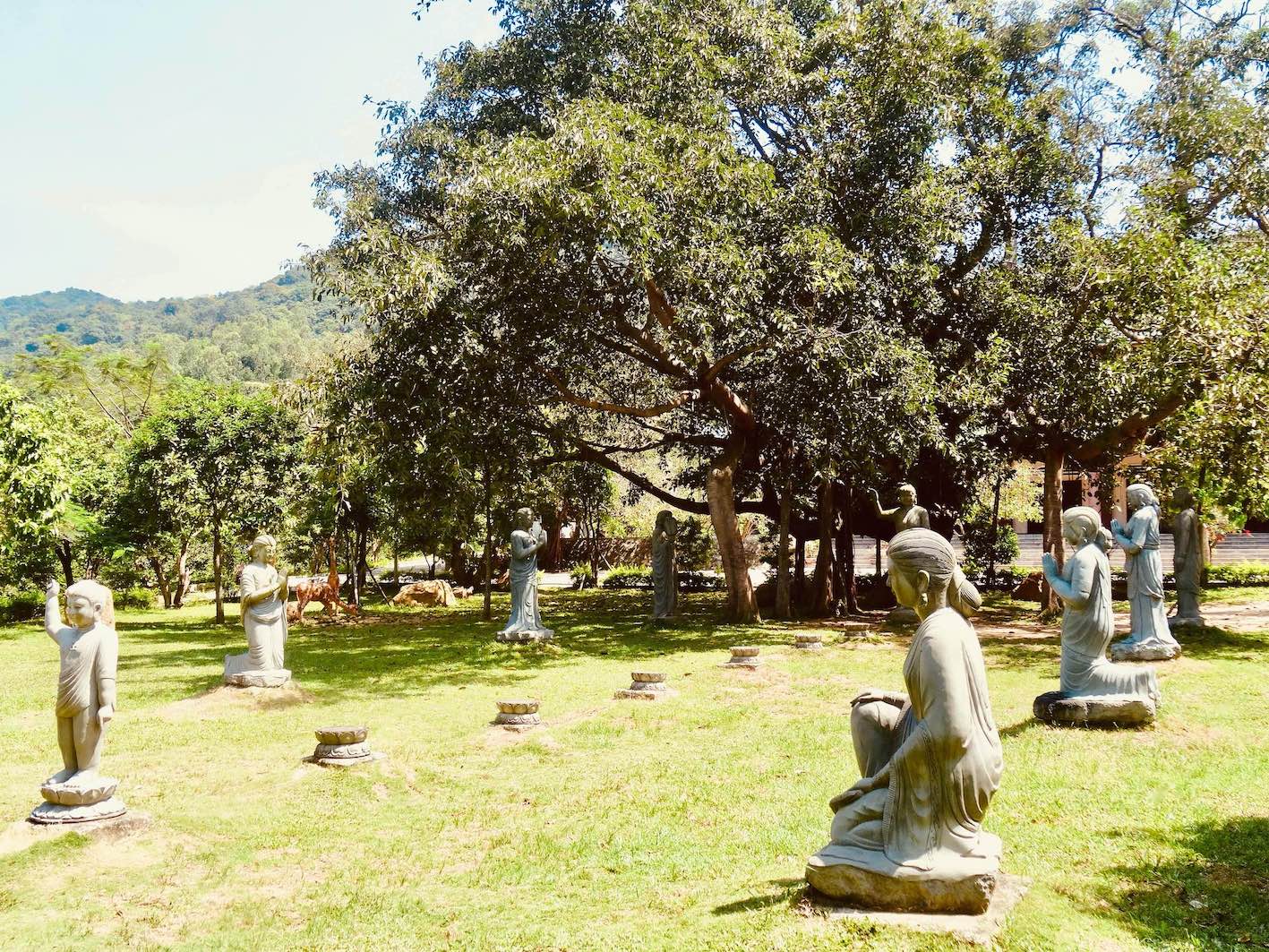 I would’ve loved to explore more of the mountain. If one has a set of wheels, and indeed the time needed before dark, it’s possible to see the lighthouse that the French built. And the cemetery that contains the graves of French and Spanish soldiers. There are also further viewpoints, including the dramatic views of Ban Co Peak. For more on these delights, check out this excellent blog by vietnamcoracle.com. 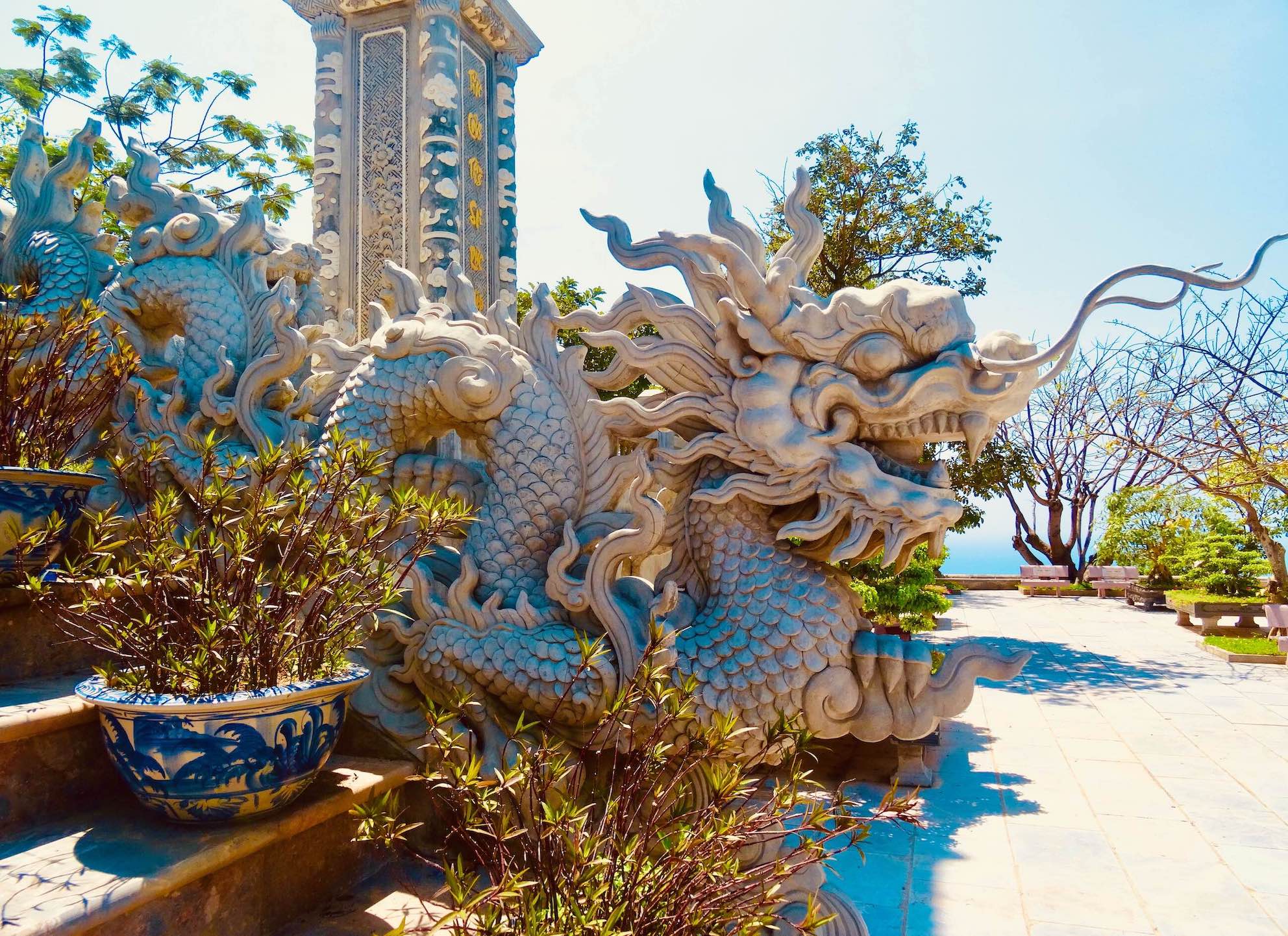 Monkey Mountain wasn’t my most glorious afternoon of exploring. In addition to the closed pagoda sights, I failed to see any actual monkeys on the nature trails descending back into the city. “Really mate!?” my old travel buddy Wonderboy later exclaimed. “They were everywhere when I visited!”

American soldiers gave Son Tra its Monkey Mountain nickname, due to the many monkey breeds living in its dense jungle. Among them lives the magnificent red-shanked douc, a critically endangered species. According to local experts, you’d be very lucky indeed to see one. 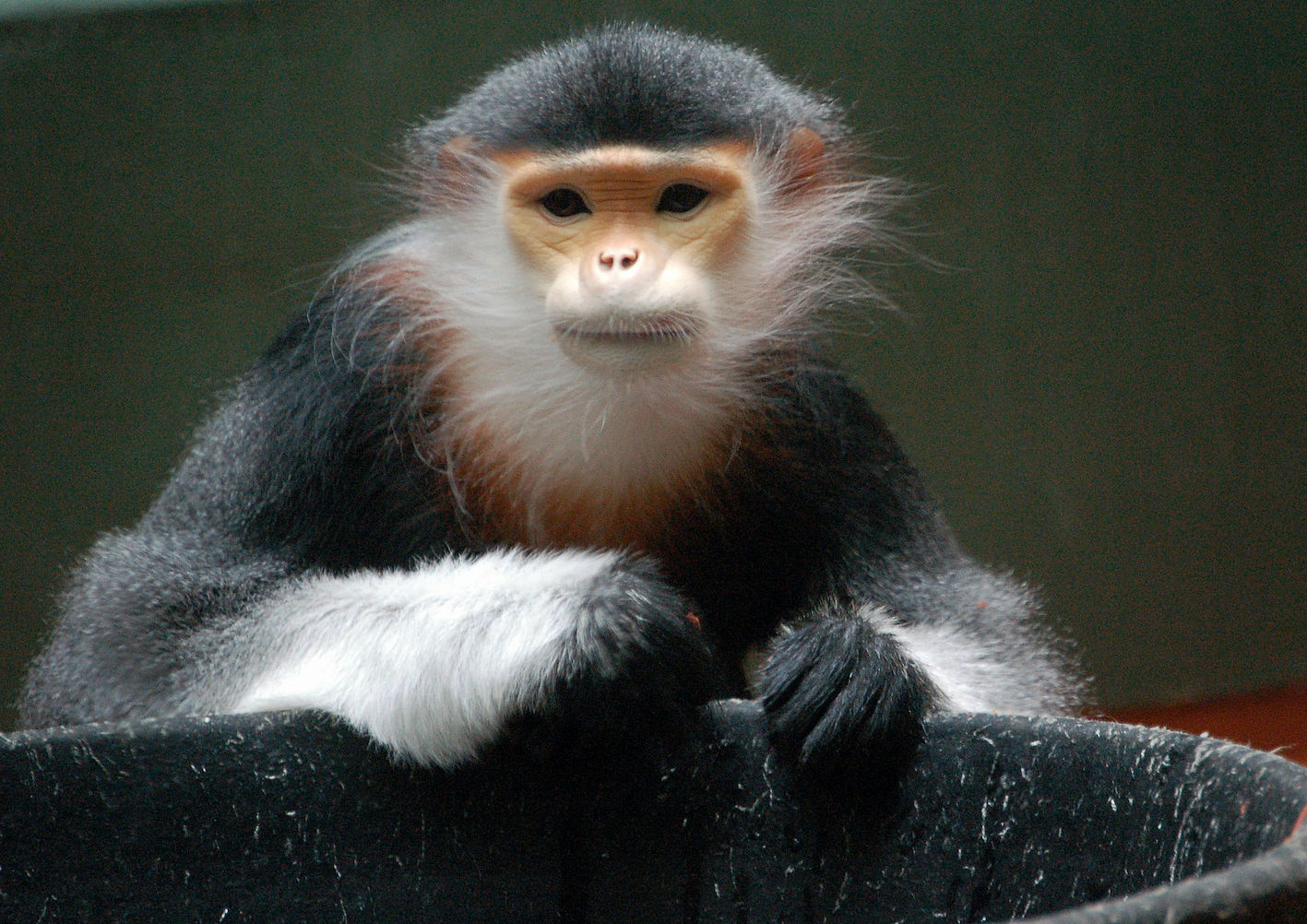 I was still on my way down when I bumped into a group of chattery Chinese women. Instinctively I fired off a few phrases in Mandarin, which had them all oohhing and aaahing in surprise. This soon transformed into all-out delight when I told them that I actually lived in China. Naturally, we had to immortalise the moment with a group shot. A fun end to a decent albeit monkey-less afternoon on Son Tra Mountain. 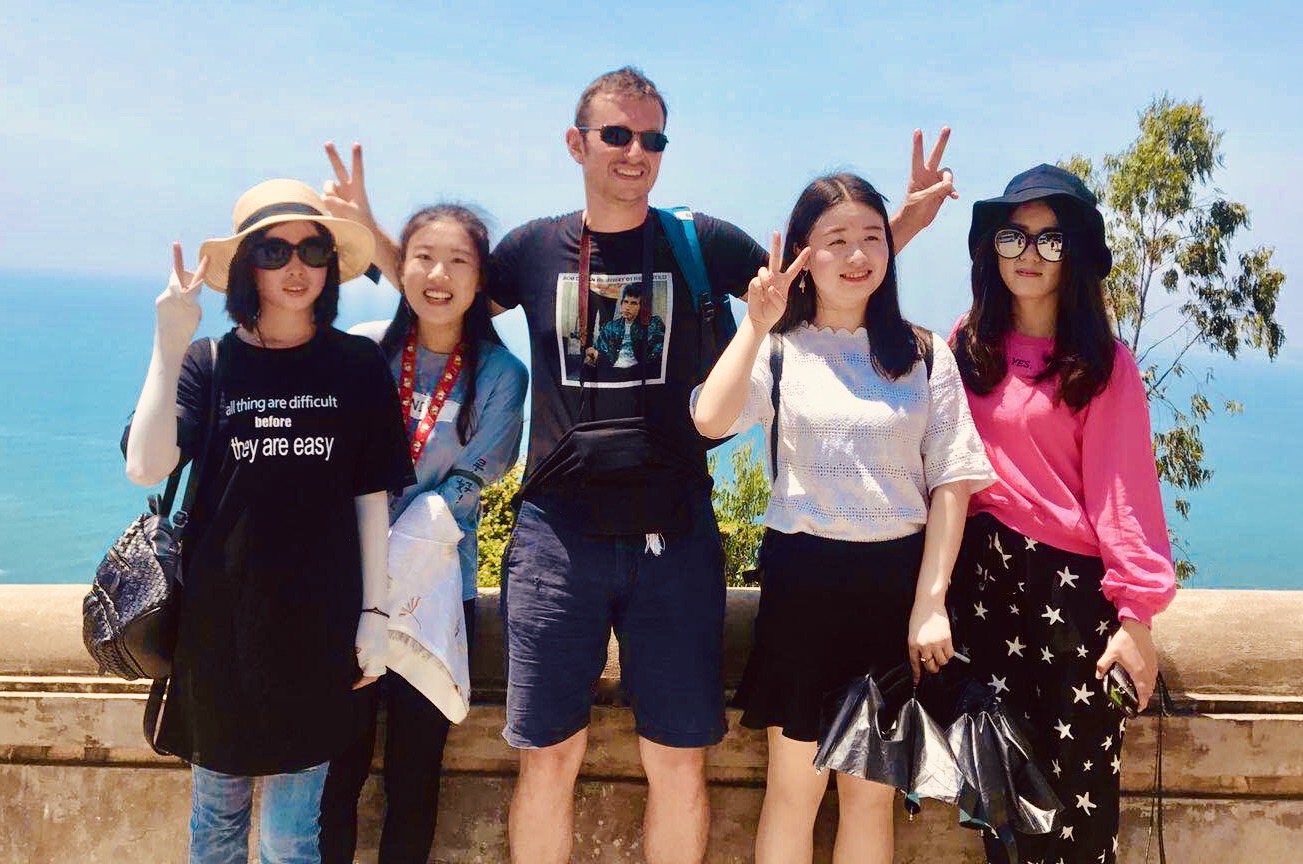