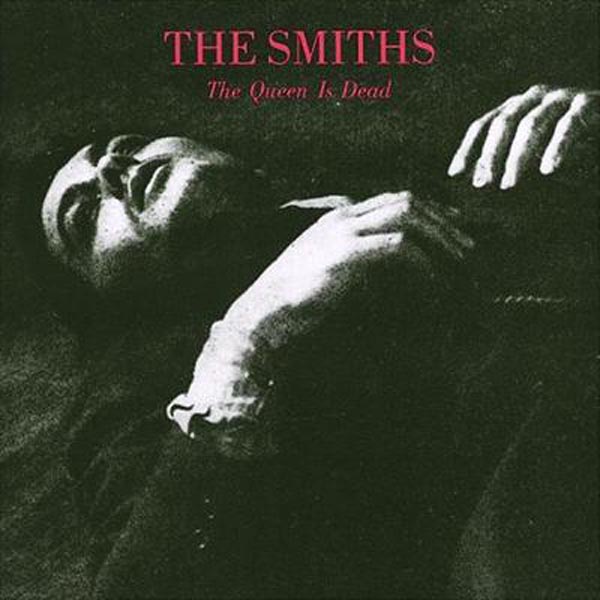 I have a somewhat sheepish confession to make. Now bear with me, but the first time I heard The Smiths I was not impressed. The track I’d stumbled across was Some Girls Are Bigger Than Others, a quirky little tune that appeared as simplistically self-explanatory as its title suggested. ‘‘Some girls are bigger than others’’ sings front man Morrissey, ‘‘some girls’ mothers are bigger than other girls’ mothers’’. Scratching my head, I couldn’t decide whether or not the whole thing was a joke, the singer’s deadpan vocals giving nothing away.

Everything I’d read and heard about the Mancunian foursome had painted them as gods, a hugely significant group with a devoted fan base not seen in Britain since the days of The Beatles. They’d inspired the likes of The Stone Roses and Oasis and were a firm favorite of my good friend Derek, a man whose musical tastes carried much weight with me. ‘‘The one truly vital voice of the 80s’’ the critics said, “The most influential guitar group of the decade’’. Um… was I missing something?

It turned out that I was! Sometime later I gave The Smiths a second chance, checking out their landmark third album The Queen Is Dead. By this time my musical horizons were rapidly expanding and I was generally more open and patient to new musical experiences. Nevertheless my love for the record didn’t come right away. Instead I fell for it gradually over repeated listens, Morrissey’s singular vocal style and distinctive charms winning me over line by line, song by song.

Opening cut The Queen Is Dead sets the tone for a record that has both historical and 20th Century Britain pulsing through its veins. Somehow merging music hall and garage rock, Morrissey mocks the media’s fascination with The Royal Family over Johnny Marr’s bombastic guitar bursts. Along the way he visualises Her Royal Highness being carted off to the gallows and wonders if Prince Charles has ever fantasized about dressing up in his mother’s clothes. There are also lyrical nods to Sigmund Freud and Lewis Carroll’s The Walrus and the Carpenter. Elsewhere, the singer’s disconnect with modern living hangs over the entire affair. ‘‘Has the world changed or have I changed?’’ he moans before the concluding refrain: ‘‘Life is very long when you’re lonely’’. 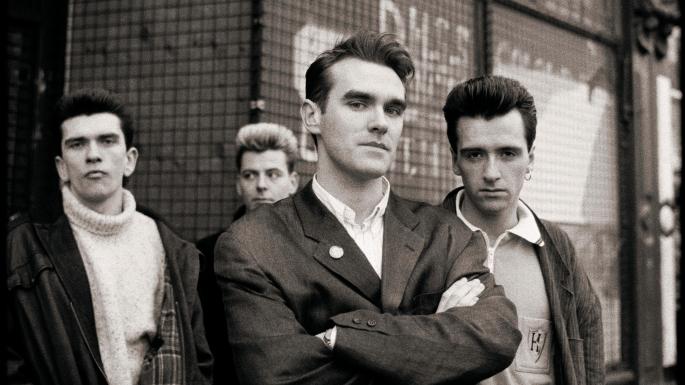 The Smiths: Only too aware that life is very long when you’re lonely.

After a powerful start the altogether lighter Frankly, Mr. Shankly is a slice of jaunty pop that cleverly divulges the band’s dissatisfaction with their record label Rough Trade. Bitter at the fine print of their contract (which chiefly ensured they remained broke), Shankly is a handle for label head Geoff Travis, a man Morrissey accuses of being “a flatulent pain in the arse’’ and writing ‘‘bloody awful poetry’’. The playful attack ends with an equally bouncy request: ‘‘Oh, give us your money!’’

Abruptly changing pace again and the maudlin I know It’s Over is a frantic admission of heartbreak and loneliness, sensations Mozza compares to being buried alive. “I can feel the soil falling over my head’’ he wails on a tune completely stripped of the group’s signature wit and irony. In fact, so despondent is he there’s even time to turn on his own inflated ego: ‘‘If you’re so funny… clever… entertaining… good-looking… why do you sleep alone tonight?’’

The impenetrable gloom bleeds into the equally brooding Never Had No One Ever, a track that details the frontman’s disengagement with his hometown. ‘‘When you walk without ease on these streets where you were raised’’ he laments, a state of mind he claims clung to him from a young age right into adulthood.

But just as the listener feels himself drowning in a black whirlpool of cheerlessness, in comes the jangly Cemetry Gates to save the day! Escaping the claustrophobia of his Inner-Manchester doldrums, Morrissey and a dear friend flee to the graveyard to do battle with poetry. ‘‘Keats and Yeats are on your side’’ he croons happily, ‘‘while Wilde is on mine’’. Despite the eerie location, it’s a bouncy package of perfect pop that sees the band stick two fingers up to their detractors, who at the time were fond of labeling them ‘‘depressing’’.

And there’s certainly no glumness to be found on the bristling energy of Bigmouth Strikes Again, the singer’s tongue in cheek indictment of his own tendency to be outspoken in the media. From the music industry, Madonna and The Royal Family to the government, the meat industry and more, Morrissey has never been able to keep his mouth shut and here he compares the subsequent backlash and persecution to that of Joan of Arc’s martyrdom. ‘‘As the flames rose to her Roman nose and her Walkman started to melt’’ he growls over an exhilarating rush of acoustic and electric guitars. 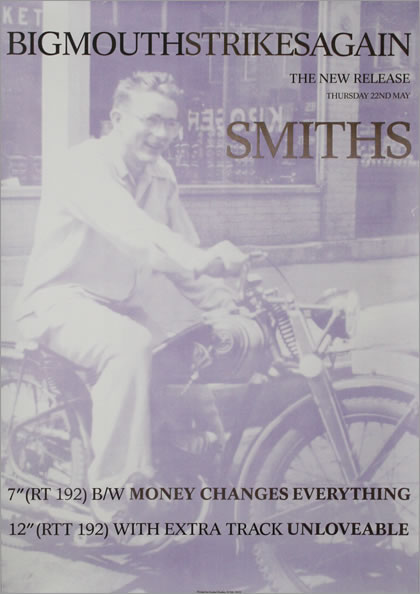 A self-confessed bigmouth he may be but the man is also staunchly unapologetic, The Boy With the Thorn in His Side serving as another stab at the music industry. ‘‘How can they hear me say those words and still they don’t believe me?’’ Aimed at the critics immune to his artistic brilliance and the DJ’s who refused to play his records, it’s a gorgeous slice of melancholia that rolls along through a pleasing backdrop of mandolin-toned guitars. Morrissey’s alluring take on yodeling meanwhile is an additional wonder to behold!

Moving into the closing trio of tracks and Vicar in a Tutu endures as the only song not to have captured my heart. An idiosyncratic commentary on the hypocrisy of the church, its awkward, fragmented country-meets-reggae feel still sounds slightly off. Having said that it has grown on me over the years and at the end of the day any song to have influenced Mansun’s Stripper Vicar is alright by me.

‘‘Take me out… tonight’’ begins the spectacular There Is a Light That Never Goes Out, a deserved fan favorite and for me the most powerful love song The Smiths ever laid down. ‘‘Driving in your car, I never never want to go home’’. Now hold onto your horses because Morrissey is in love! ‘‘I want to see people and I want to see life’’ he warbles longingly. But of course this being The Smiths darkness is never far away and he’s soon concluding that should they be hit by a double decker bus or a ten-ton truck, ‘‘to die by your side is such a heavenly way to die’’. Between its sweeping synthesised strings and Marr’s poignant flute melody, a fatal road accident has never sounded so romantic.

And so we come full circle to the frivolity of Some Girls Are Bigger Than Others, a curious way to end the album. What I didn’t know during that first listen all those years ago is that the track is dripping with Morrissey’s disdain for typical male working class discussions, which to him are the exclusive terrain of football and girls’ breast sizes. A song that has admittedly won me over completely, there are lyrical bows to the country and western hit Send Me The Pillow That You Dream On, as well as the British slapstick comedy film Carry On Cleo. ‘‘As Anthony said to Cleopatra as he opened a crate of ale… Oooh I say!’’ As silly as it undoubtedly is the music remains terrific, producer Stephen Street’s clever false-fade beginning and Johnny Marr’s invigorating slide guitar transforming a potentially throwaway track into something more substantial.

Having fallen hook line and sinker for the band’s charms, I eagerly worked my way through their remaining works, becoming an ardent fan. Among the many highlights stands the stunning Well I Wonder taken from 1985’s Meat is Murder, possibly my favorite Smiths track. When it came to selecting my favorite album though I initially assumed their final LP Strangeways Here We Come would claim victory. The first six tracks are absolutely magnificent, packing the kind of punch and magnetism that make the hairs on the back of my neck stand up. But ultimately the rest of the album doesn’t quite pull my chain in the same way, so the pendulum swung in favor of The Queen Is Dead for its overall consistency and greater sense of romanticism.

It’s an album that can perk me up if I’m feeling down, yet also serve as the perfect accompaniment to a grey rainy day. It’s stuffed full of humour that often makes me laugh out loud, but also has moments of forceful beauty that brings to mind past relationships, deceased friends and old times that can never be reclaimed. It also made me learn an important life lesson, something I’d previously not given a great deal of thought to. At the end of the day… when all is said and done… some girls’ mothers are bigger than other girls’ mothers. 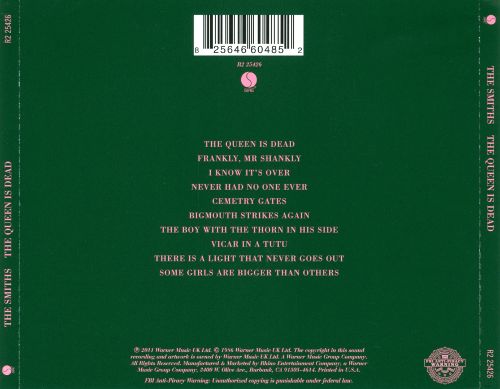 Choice Lyric: “So I broke into the palace with a sponge and a rusty spanner. She said eh, I know you and you cannot sing, I said that’s nothing you should hear me play piano’’ – From The Queen Is Dead.

Like this? Both Morrissey and Marr have cited The Smiths’ swan song Strangeways Here We Come as their favorite album. If you liked The Queen Is Dead, head straight for this one without delay!

Like Loading...
Bigmouth Strikes AgainCemetry Gates The SmithsFrankly Mr ShanklyI Know It's Over The SmithsNever Had No One EverSome Girls Are Bigger Than OthersThe Boy With the Thorn in His SideThe Queen is Dead album reviewThere Is a Light That Never Goes Out
Share
Previous Post Next Post