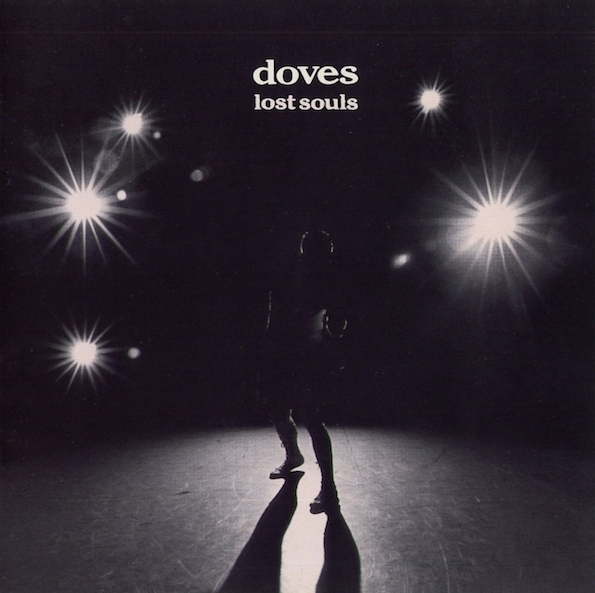 In the summer of 2000 I turned twenty two and as per tradition back in those days I was treated to a bunch of CDs from my core group of music-loving friends. It was always exciting to receive a pile of albums all at once, even if I knew I’d be getting exactly what I’d asked for. That year there was Coldplay’s excellent debut Parachutes, Badly Drawn Boy’s Mercury Prize winner The Hour of Bewilderbeast and Super Furry Animals’ Welsh language delight Mwng. But then I unwrapped a title that took me by surprise. Lost Souls by Doves? Who the heck are Doves?

In February 1996 twin brothers Jez and Andy Williams had the worst birthday ever. The creative force behind UK dance act Sub Sub, along with their old school friend Jimi Goodwin, the trio could only watch in dismay as a tragic fire burnt down their recording studio and all their equipment. A total nightmare obviously, but also an epiphany that led to them disbanding Sub Sub and remodelling themselves as an alternative rock band. And so Doves was born, literally out of the ashes of their former group. With their love of dance music, history of clubbing and eclectic array of influences (Wilco, Beastie Boys, Talk Talk), Doves were never going to sound like your typical indie outfit and indeed their debut album Lost Souls was like nothing else at the time. 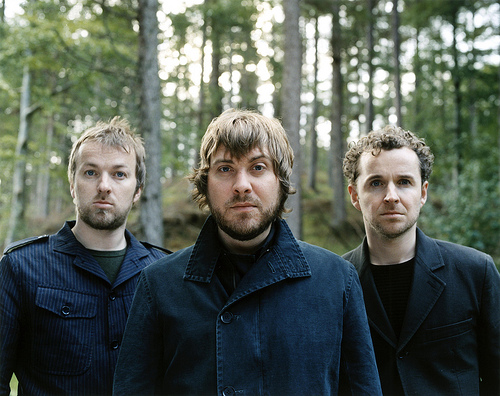 There is an accepted wisdom that any rock band worth their salt should demand the listener’s attention right from track one, kick the record off with a bang so to speak. Good advice for some groups perhaps but not for Doves, who open proceedings with the creeping, unsettling ambience of Firesuite. A dreamy, largely instrumental number with understated electric guitar and delicate strings, it’s a subtle piece of great beauty. Like much of the record, it’s also terrific headphones music that sucks the listener into a world of dark, lonely insomnia, but not without a reassuring sense of calm and quiet expectancy for the coming day.

And very much like the breaking of dawn Firesuite dissolves into the rolling piano-driven groove of Here It Comes. ‘‘This is the day, this is the time to stare at the world in wonder’’ states singer Jimi Goodwin on a song believed to be both mourning and celebrating the end of the drug-fuelled Manchester rave era. ‘‘You should’ve seen what I have seen’’ he chants alongside sharp beats before a swirling, shoegazing outro that bleeds into a final string of mournful piano keys.

And then we’re back to the claustrophobic night and the sighing resignation of Break Me Gently. ‘‘I see you’ll be breaking hearts again’’ despairs Goodwin through electronically distorted vocals, his misery carried along via pretty acoustic strumming and spectral harmonies.

Next up is the brooding, nightmarish Sea Song with its talk of “crushing dreams’’ and ‘‘pain ingrained in me’’. Driven by a pounding, wave-like percussion and haunting harmonica, there are more languid vocals from a barely comprehensible Goodwin, who hopes a drive to the sea can ‘‘soothe my pain’’.

The meditative yearning of Rise meanwhile is a sorrowful tribute to a lost summer romance. ‘‘So long’’ echoes guitarist Jez Williams on a track so dreamy it has the listener floating away with him “miles away from anywhere’’. “The sun has gone too soon’’ he laments amid atmospheric electronica and a nostalgic harmonica solo.

An exceptionally cohesive record from start to finish, Rise effortlessly bridges into the psychedelic title track with its throbbing chords and frenetic drumming. ‘‘She cries for the lost souls’’ warbles Goodwin on a track that for me outstays its welcome a little, its relentless fairground organ beginning to grate long before the song finally fades out.

So the perfect moment then for a complete change of pace, with the wonderfully optimistic Melody Calls. ‘‘Time to lose myself again!’’ go Williams’ summery backing vocals on a gorgeous 60’s pop tribute fitted with breezy harmonica and sun-drenched harmonies.

If this turn of events takes listeners by surprise they’ll be even more startled by the album’s standout rocker Catch the Sun. ‘‘I’m always misunderstood, ripped apart and pulled in two’’ belts out Goodwin amid colliding drums and the kind of infectious riffing born to fill indie club dance floors.

‘‘Lives have been wrecked and I’ve picked up my check’’ goes The Man Who Told Everything, a sweeping, cinematic ballad about a boxer’s decision to hang up his gloves. ‘‘I can’t do no one else’’ he sobs alongside majestic strings and twinkling guitars.

Follow-up track The Cedar Room is equally affecting, the kind of epic breakup song Chris Martin would give his right arm to have written. ‘‘I’ll be a shadow’’ mourns Goodwin ‘‘and leave just a memory alone with you’’. It’s beautiful, heartbreaking stuff that seeps into the symphonically pleasant though ultimately unnecessary Reprise, which feels a bit like The Cedar Room’s uninvited ghost.

Which brings us to closing track A House, a fragile stripped-down affair that recalls the burning down of a structure (almost certainly the band’s old studio) where ‘‘the walls were thin and they crashed to the ground’’. As harrowing as this imagery undoubtedly is, there’s also a keen sense of liberation and rebirth, a suggestion that through such a tragedy there can be lessons learned and a new path forward. ‘‘If I ever find myself here again I’ll give everything’’ reveals Goodwin on the record’s poignant final line. 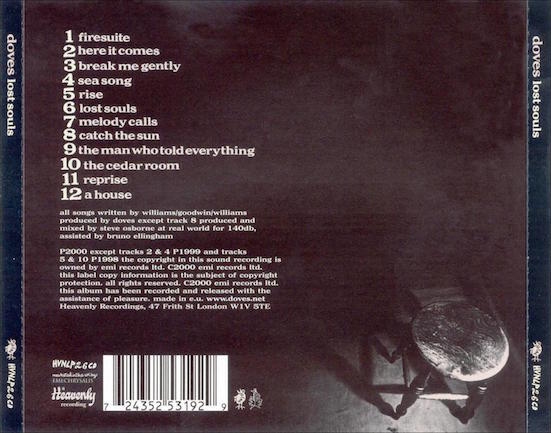 The first time I listened to Lost Souls I was fascinated. Musically there is so much going on and I think it took a good few years before I could say I really knew it well. Deep, layered, lush, foggy and sonic, it’s a producer’s album in many respects and one that shows rock music doesn’t have to be restricted to the meat and potatoes approach. And yet having said that, I wouldn’t describe it as inaccessible either, as the guys also proved they knew their way around a big chorus, a catchy hook and a foot-stomping riff. Needless to say I’ve been a Doves convert ever since, and their compact four studio album discography would be a smart addition to any respectable music collection. For the uninitiated, start here and don’t look back.

Choice Quote: “I remember us being extremely proud of the record but prepared to take a music press battering. You know, dance guys go indie etc. When it was well received we were a bit taken aback as we were so used to being in underdog mode!” ­­– Doves front man Jimi Goodwin.

Choice Lyric: “She stops out till morning, she hangs out at fairgrounds. Moving to a new sound, waiting to forget the past’’ – From Melody Calls.

Like this? Check out the band’s monster follow-up record The Last Broadcast, which went straight to number 1, cementing Doves as one of Britain’s heavyweight alt-rock outfits.