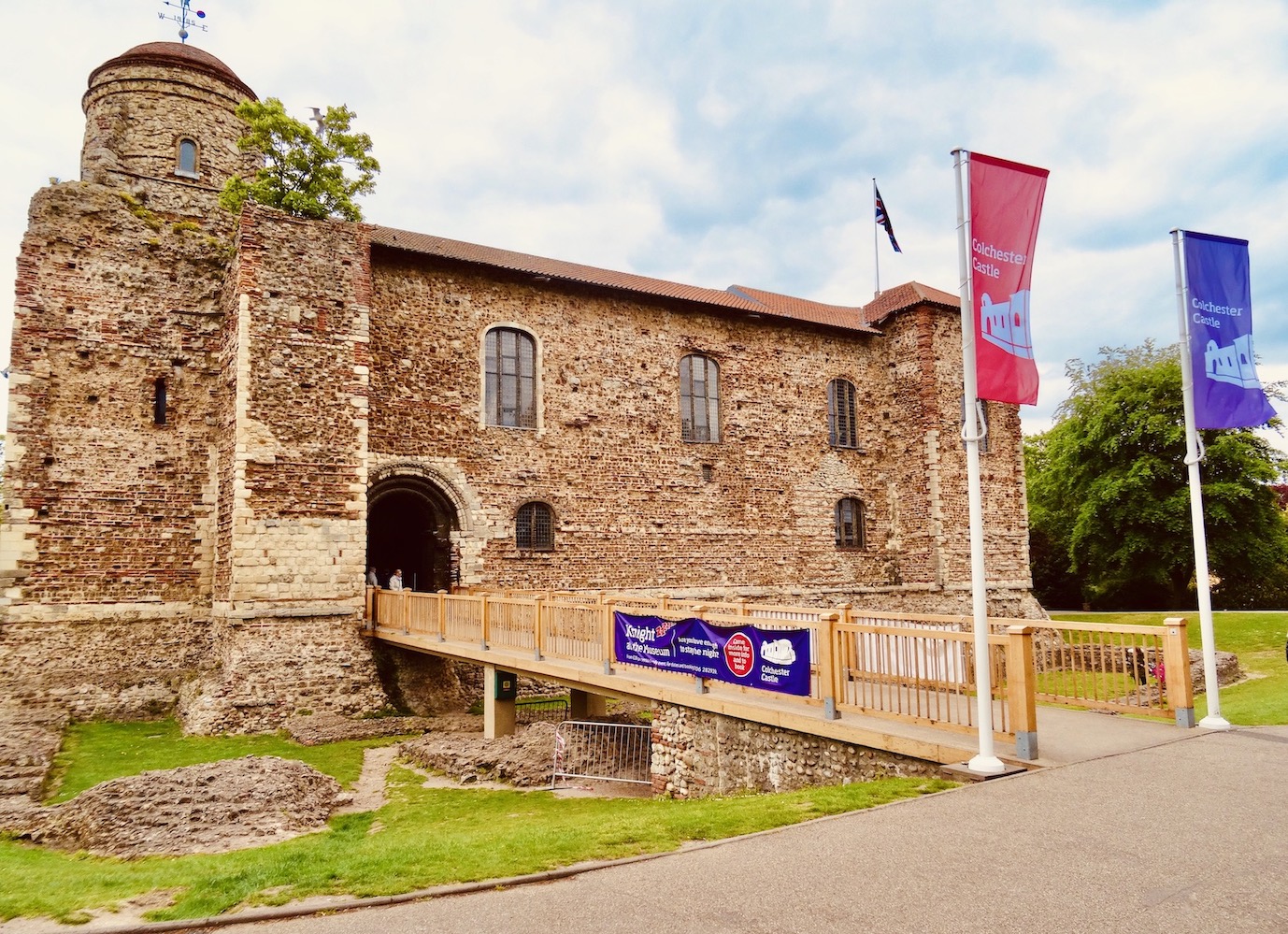 May 2019. I had just arrived in the town of Colchester for a long overdue reunion with my grandma. I was back in England after two years exploring various countries in Asia. In the meantime, my nan had relocated to this little English town I knew nothing about. While nan was busy at home creating one of her magical roast chicken dinners, I found myself with a solid three hours to tick off Colchester’s main sight.

Handy then that Colchester Castle and its excellent museum are just an eight minute walk from the railway station. On arrival, I was encouraged to discover what a pretty and sizeable old structure it is. In fact, the castle boasts the largest Norman keep in Europe! 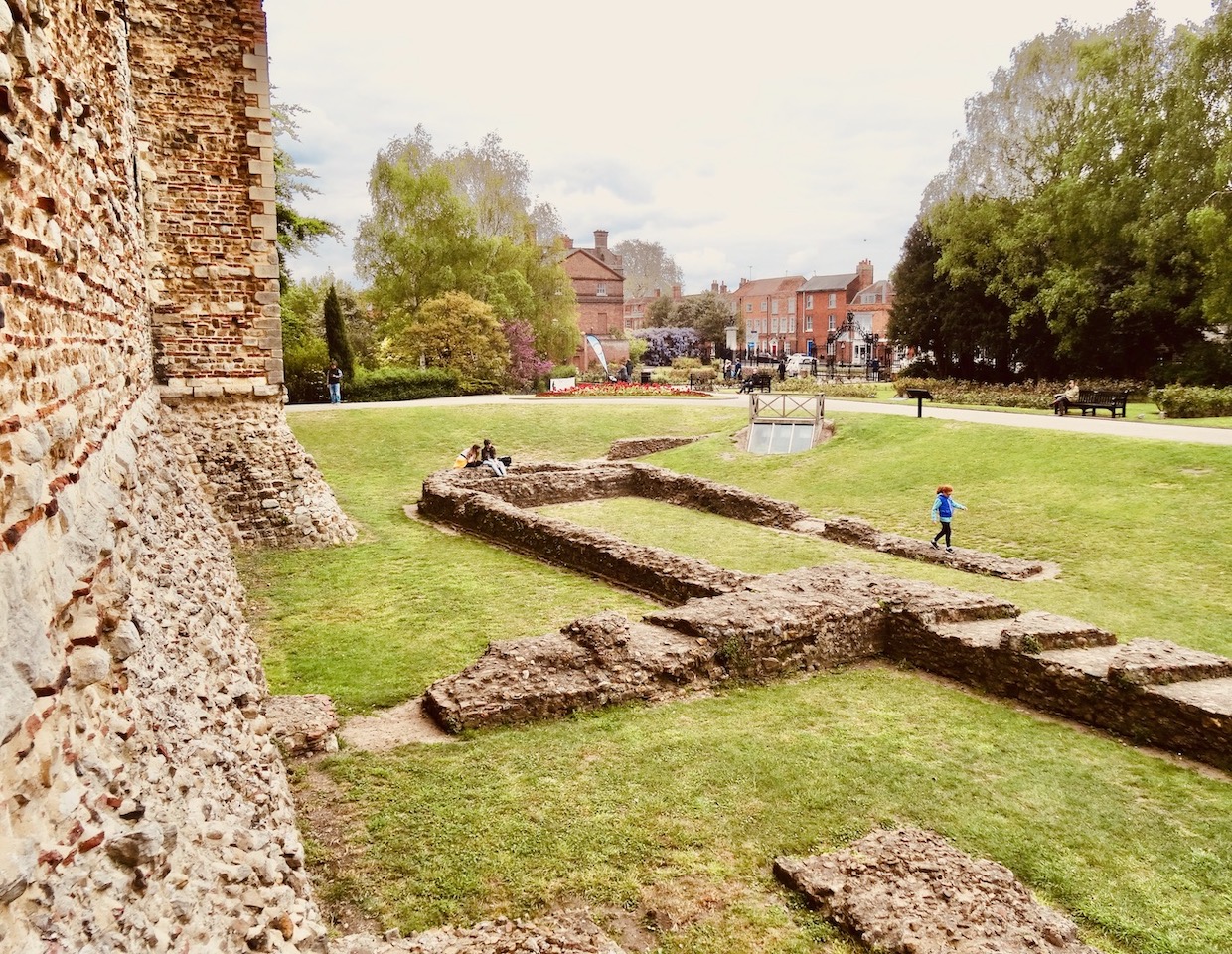 Colchester Castle’s long history begins nearly 2000 years ago, when The Temple of Claudius stood here. Pretty much the most famous building of Roman Britain. The fearsome, red-haired warrior Queen Boudica, ruler of a satellite kingdom, destroyed the place in AD 60 during a bloody rebellion against The Romans. 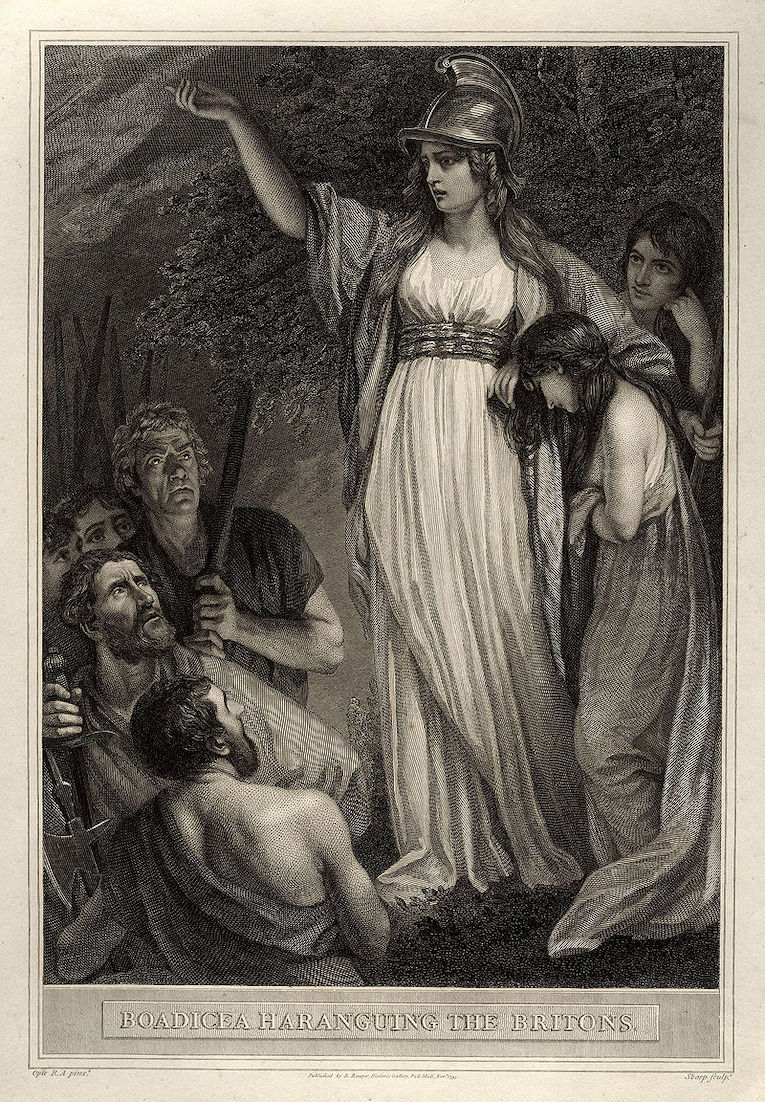 Queen Boudica: Not to be messed with.

As a result, the temple was in complete ruin by the time William the Conqueror decided to build the castle we see today in 1076.

In 1726 it fell into the hands of Charles Gray, a local businessman and historian who spent a chunk of his time restoring the old joint. Gray, a hugely influential figure in Colchester history, added the dramatic windows, tiled roof and domed tower. 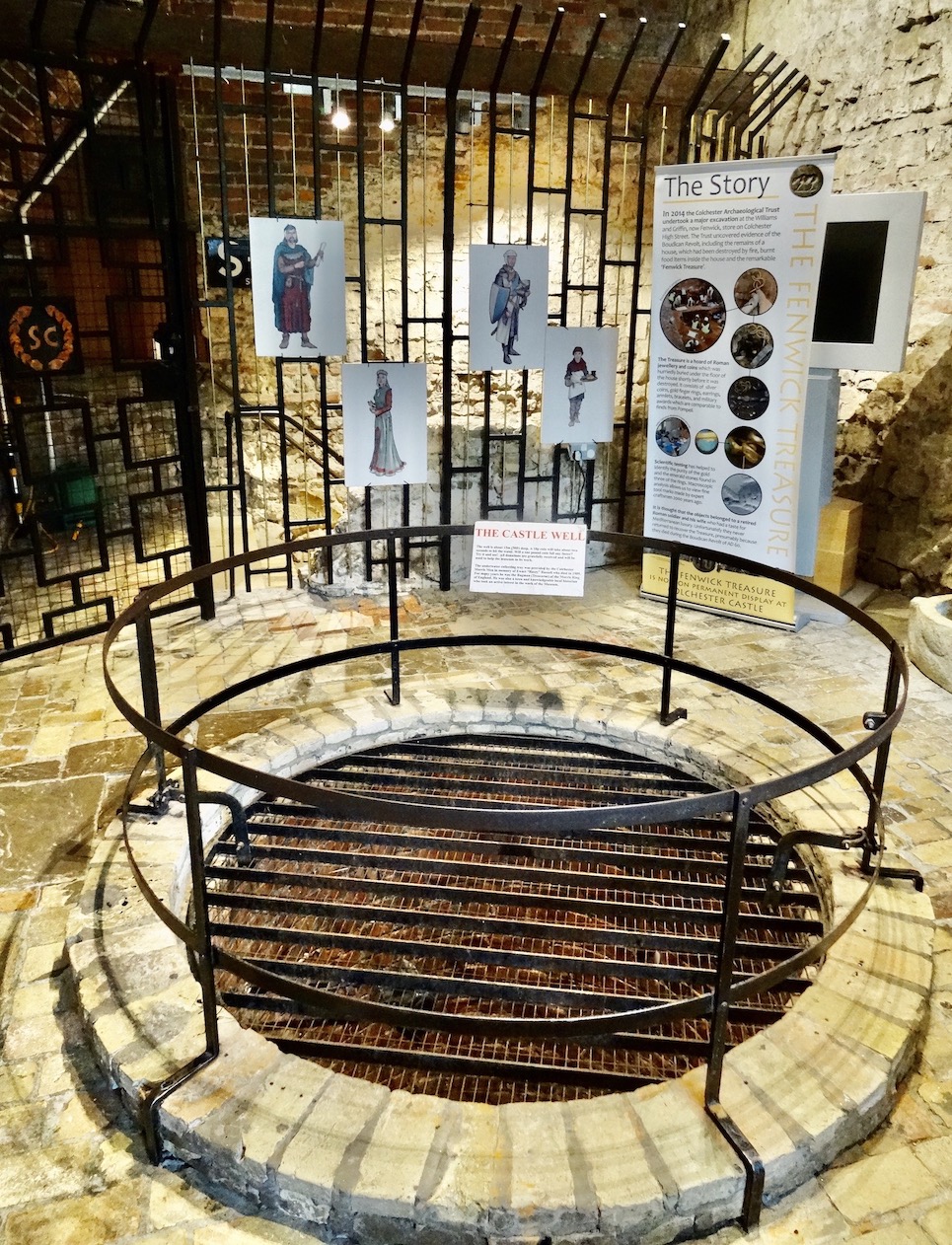 The first thing you see as you enter is the old well. It’s a 50 foot drop apparently, which means a 10p coin will take about two seconds to hit the water. The accompanying information board suggests you might want to see if a one pound coin falls any faster. Ha, nice try Colchester Castle!

Seriously, the castle welcomes all donations, which are used for maintenance and restoration projects. The Colchester Morris Men (a local traditional music group) donated the well’s coin collection tray. They dedicated it to Ewart “Rusty” Russell, a local historian who passed away in 1989. 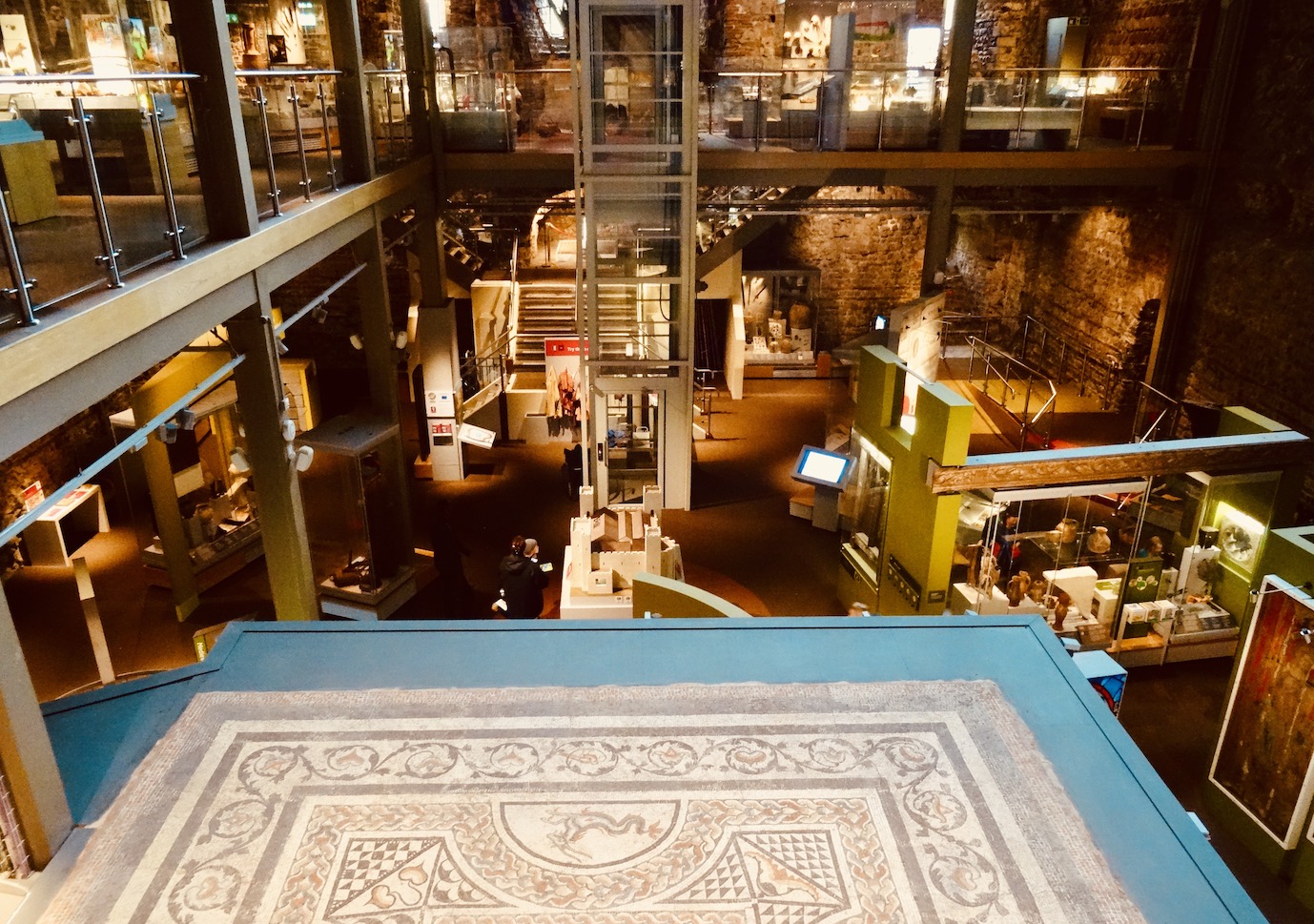 If you want to go beyond the well, you’ll have to cough up the entrance fee. It’s £10 for an adult ticket, thus I paid my dues and made my way into the surprisingly modern ground floor exhibition hall. It’s a beautifully curated space, featuring ancient sculptures, glass exhibits, interactive play pens and touch screen story boards. 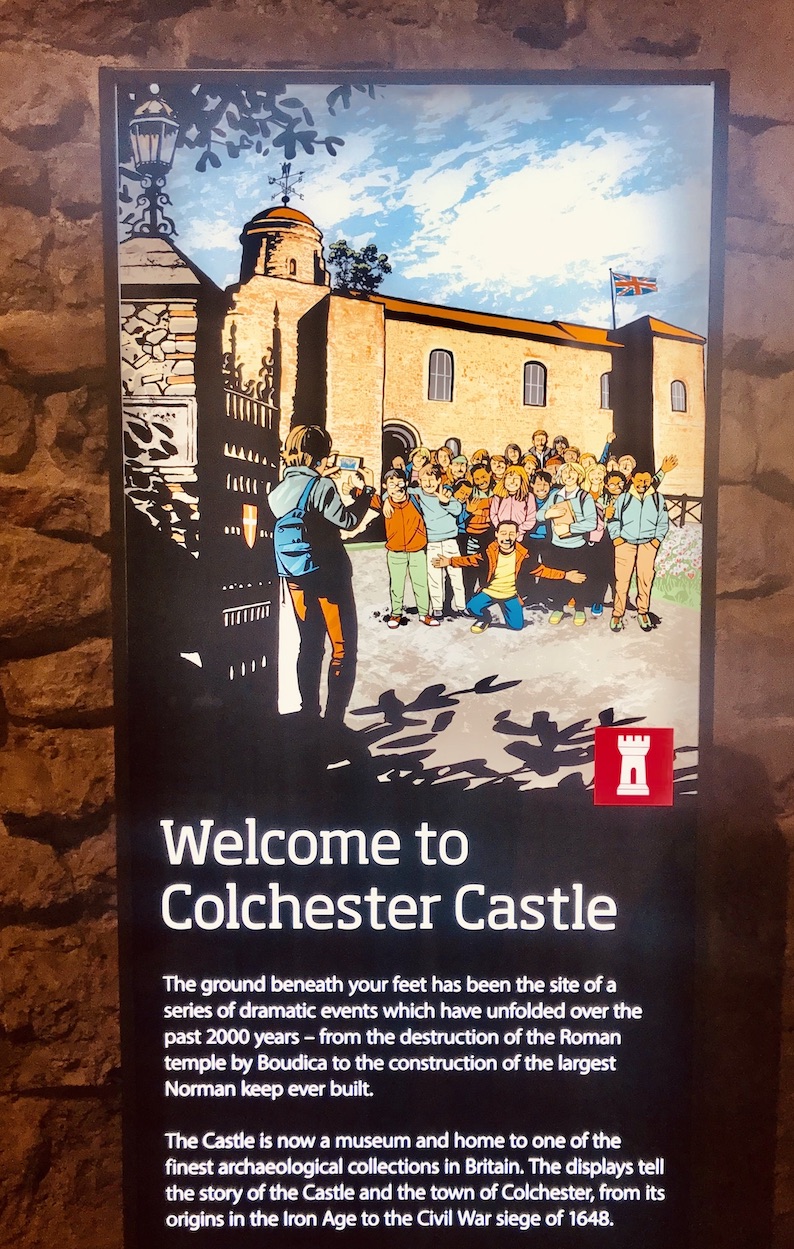 Hanging dramatically over a first floor balcony is the famous Middleborough Mosaic, a giant section of tiled flooring found in an ancient house just outside Colchester’s town walls. 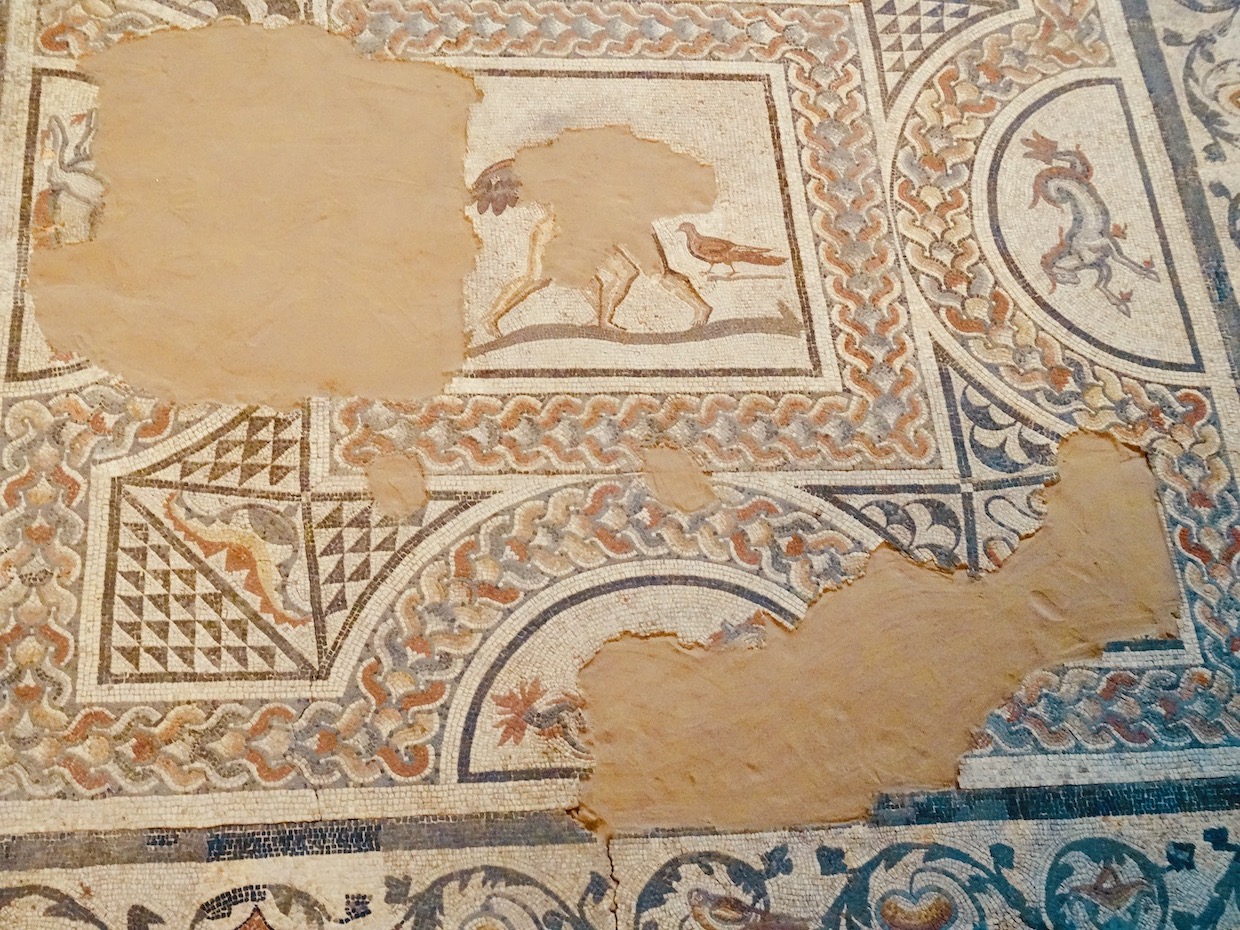 The mosaic is one of Britain’s finest examples of Roman workmanship. Note the use of shading on the central panel to create a 3D effect. They say it likely suffered heavy damage after the house it stood in got demolished around 300AD.

I love how Colchester Castle has lots of Please touch! signs, the total opposite of how museums rolled when I was a kid. You can play around with traditional costumes and have a go on a chariot simulator. Or even try your hand at building a Norman archway from a pile of soft foam slabs!

Moreover, a handful of costumed volunteers bring the castle’s history to life through storytelling and role play. This guy was talking his huddled group of children through the million and one uses of a Roman era knife. Furthermore, he seemed genuinely delighted at their answers after he asked them what they thought such knives were used for.

“Well done! You didn’t fall into the trap of saying they’re for stabbing people!” 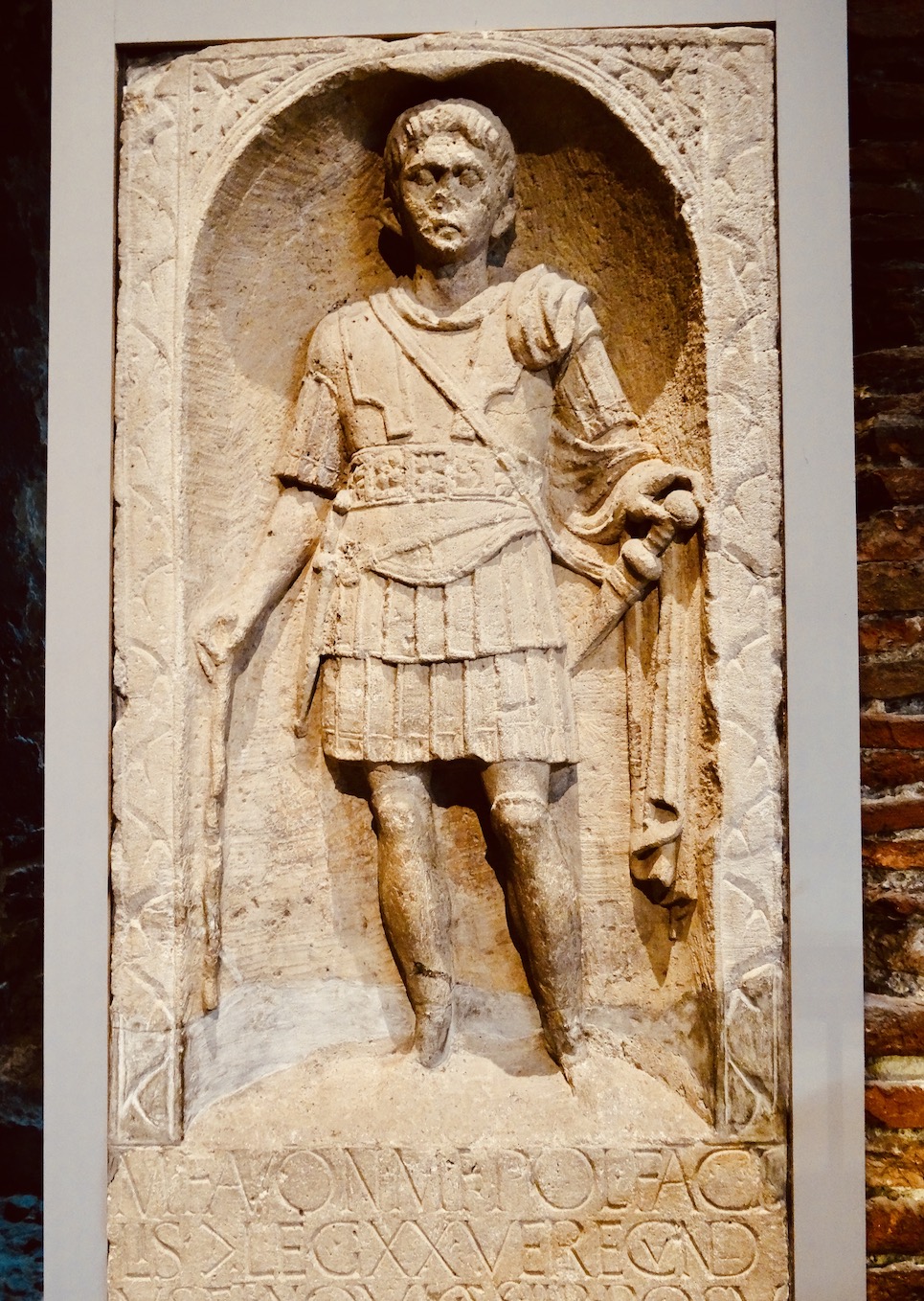 Colchester Castle Museum houses some of England’s most impressive ancient sculptures. One of these is The Tombstone of Marcus Favonius Facilis, a Roman centurion who served in the Twentieth Legion, a regiment based at Colchester Fortress.

He died shorty after The Roman Conquest of Britain and was buried in a cemetery alongside the main road to London. The style of sculpture represented by the tombstone was developed in what is now the Rhineland area of Germany, where the Twentieth Legion had once served. 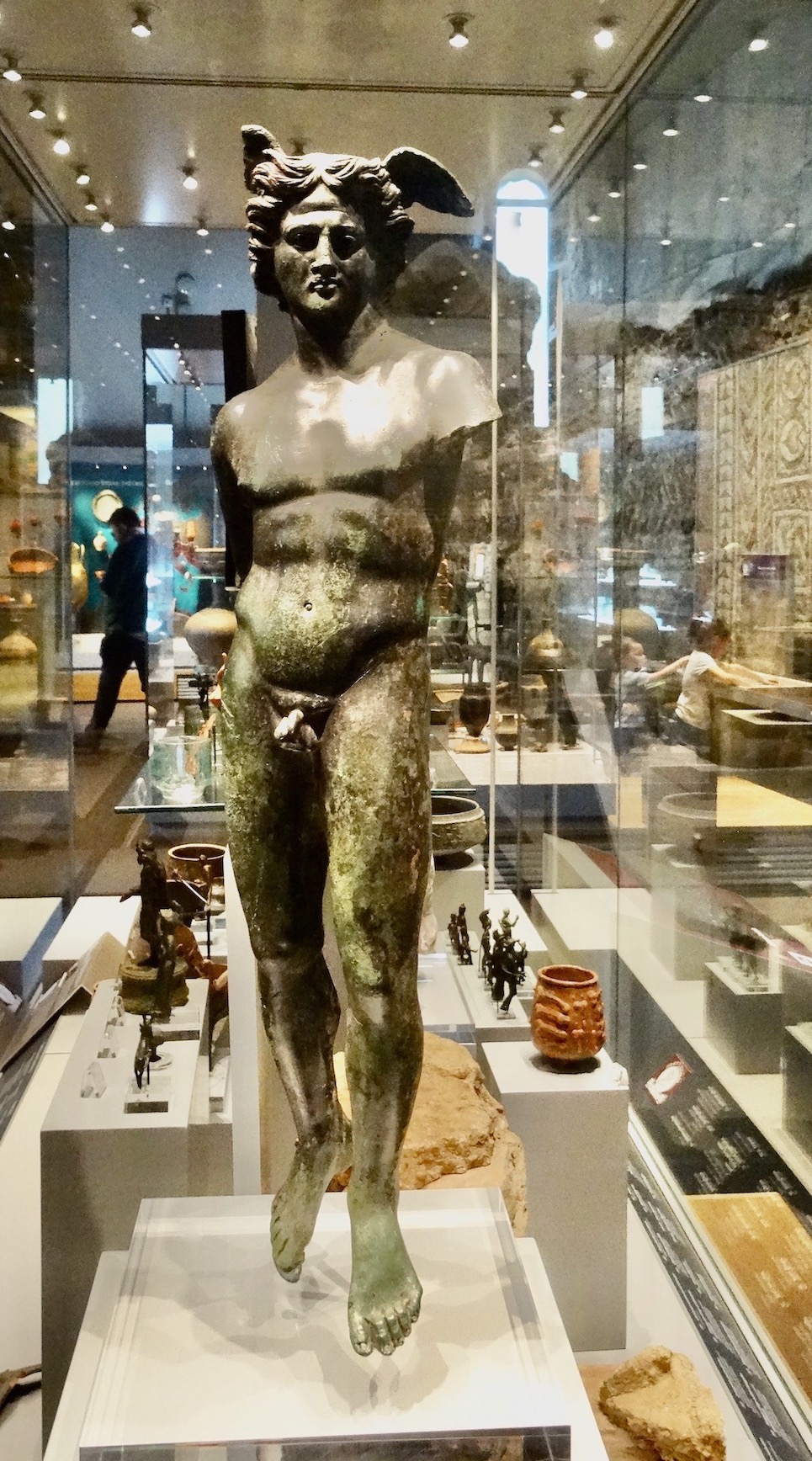 Another striking piece is The Colchester Mercury, one of the finest statues from Roman Britain. Made in the 2nd century, Mercury was the messenger of the gods, recognisable for the wings on his head.

He was also the god of movement, which made him popular with travellers, traders and even thieves. Indeed petty criminals and robbers believed his charms would help them quickly escape from their victims and continue to evade the law. 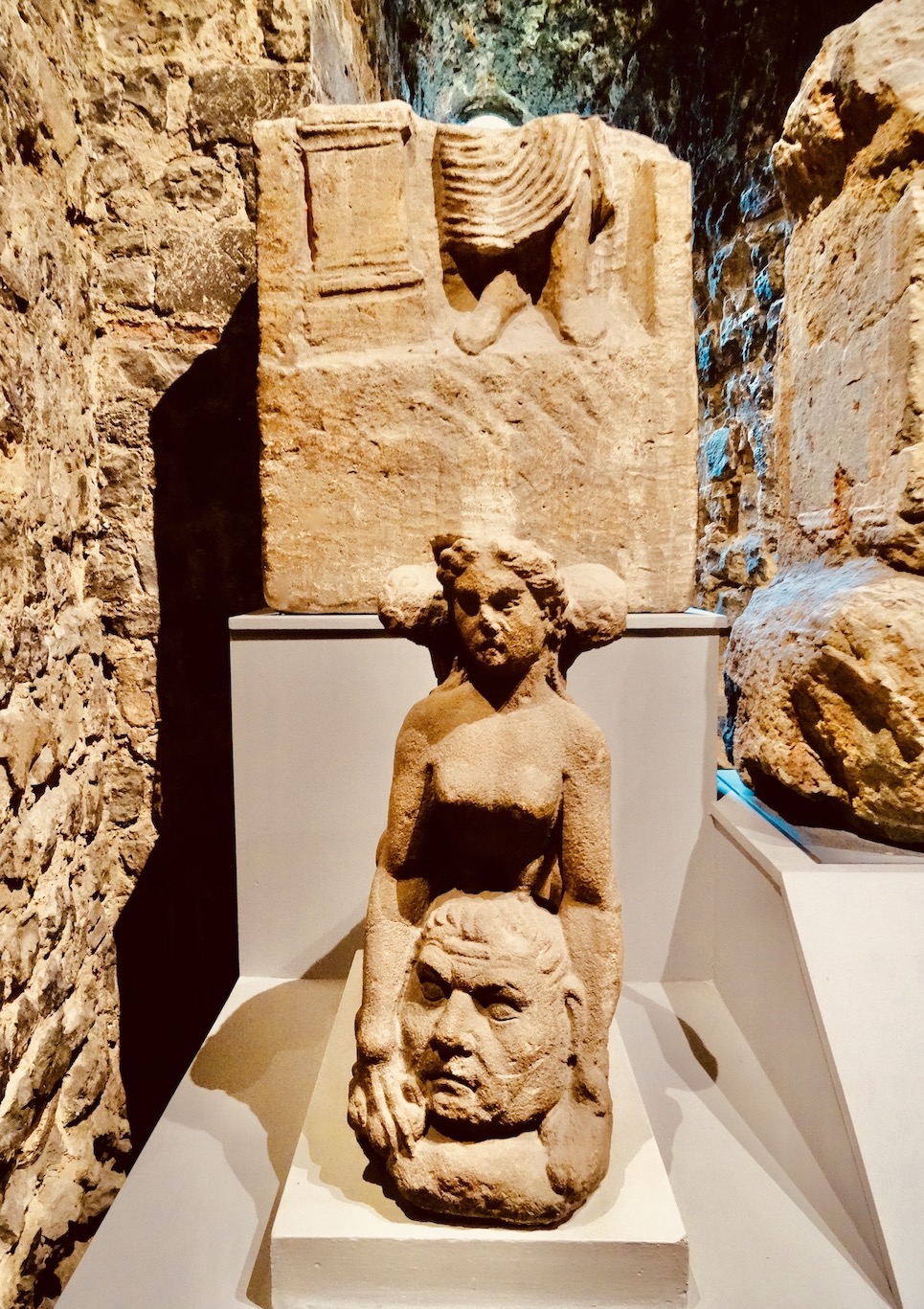 I also came upon The Colchester Sphinx, discovered in an old Roman tomb on the site of what is now Essex Hospital. It has the body of a winged lion and the face, arms and breasts of a woman.

Experts say it dates back to around AD 43-75 and represents the triumph of death over life. She crouches over a pile of bones, clutching the head of the deceased in her claws. 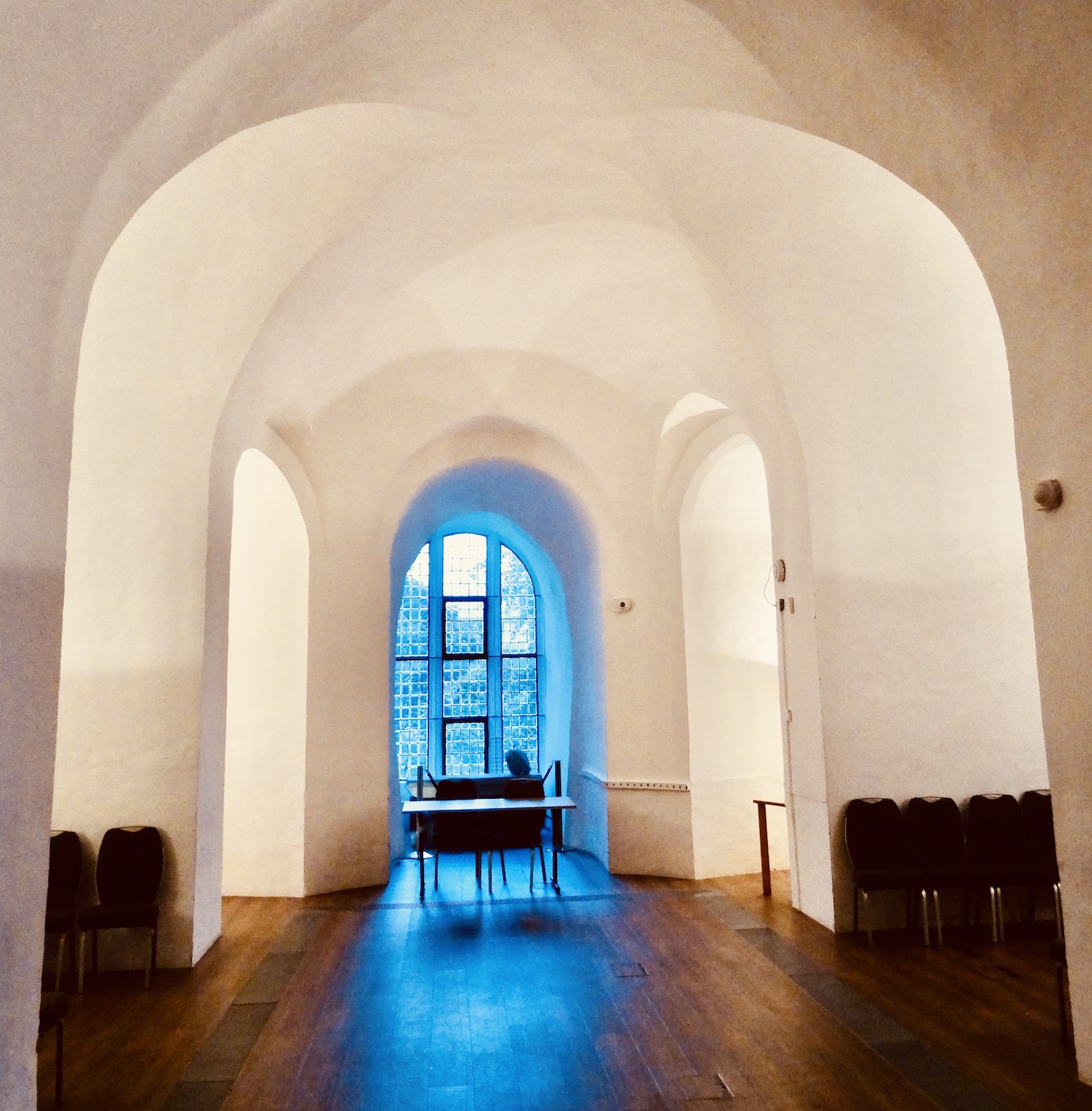 This was Colchester Castle’s chapel, originally used by the king, queen and constable. Charles Gray restored the room in 1749, after which it served as a military armoury. In 1860 it formed the main room of the newly opened Castle Museum, but today sits largely empty, with just an info board detailing its potted history. 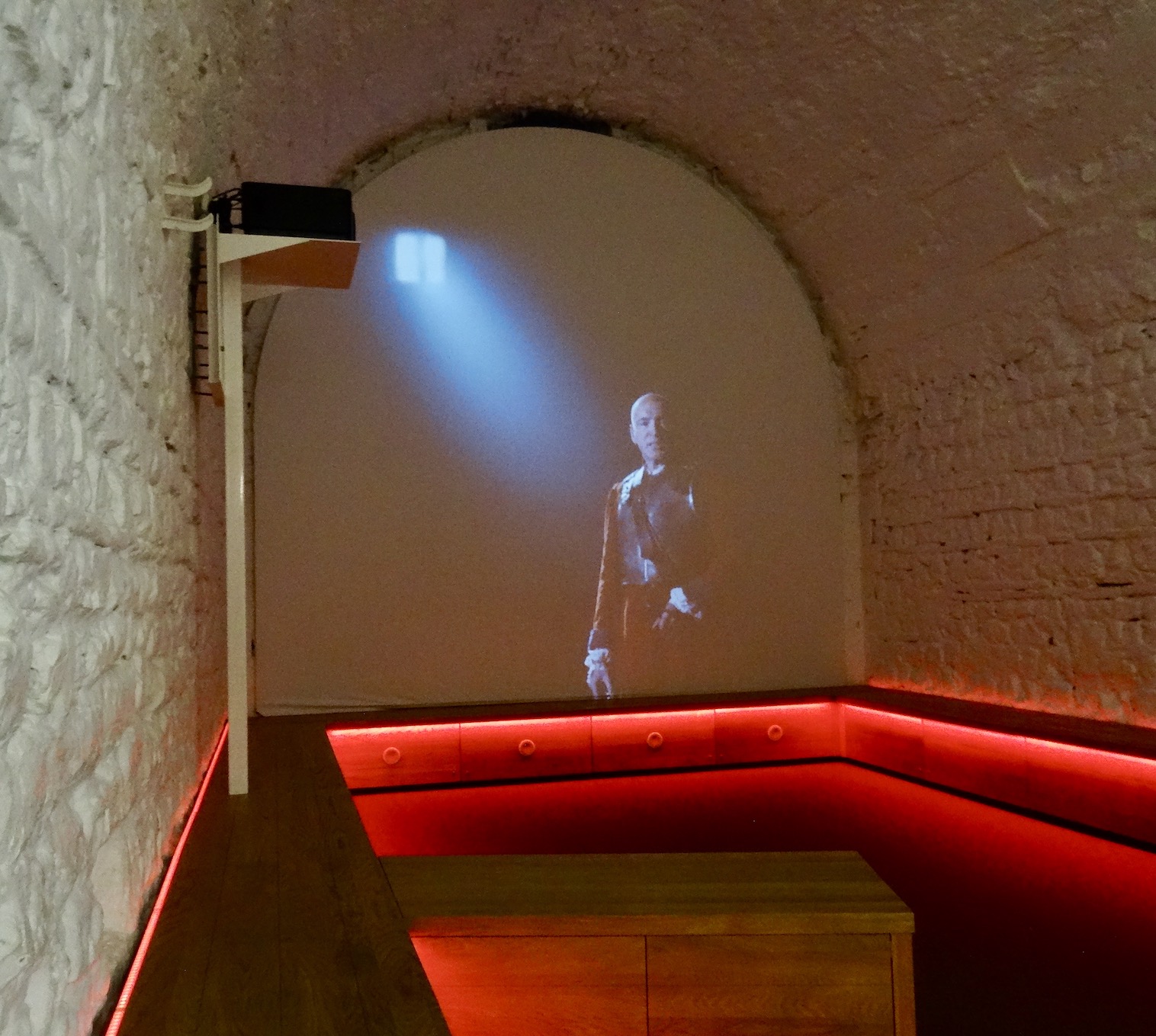 The final stop on my tour of Colchester Castle Museum was The Lucas Vault. In the early 1600s this was the castle prison. Later on, during Victorian times, it became a soup kitchen for the poor and then a workshop for the newly opened museum. 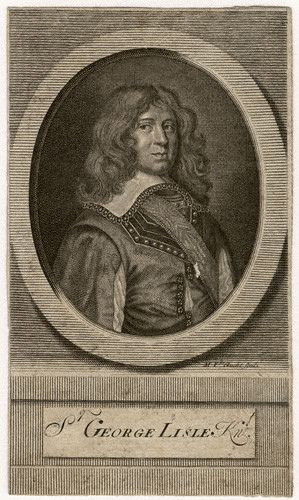 Its most famous (and gruesome) event came on the 28th of August 1648 at the end of The Siege of Colchester. Two Royalists, Sir Charles Lucas and Sir George Isle, were briefly held in the vault before soldiers led them outside for execution by firing squad. Today you can sit in the dimly lit space and watch a creepy video about the vault’s history. 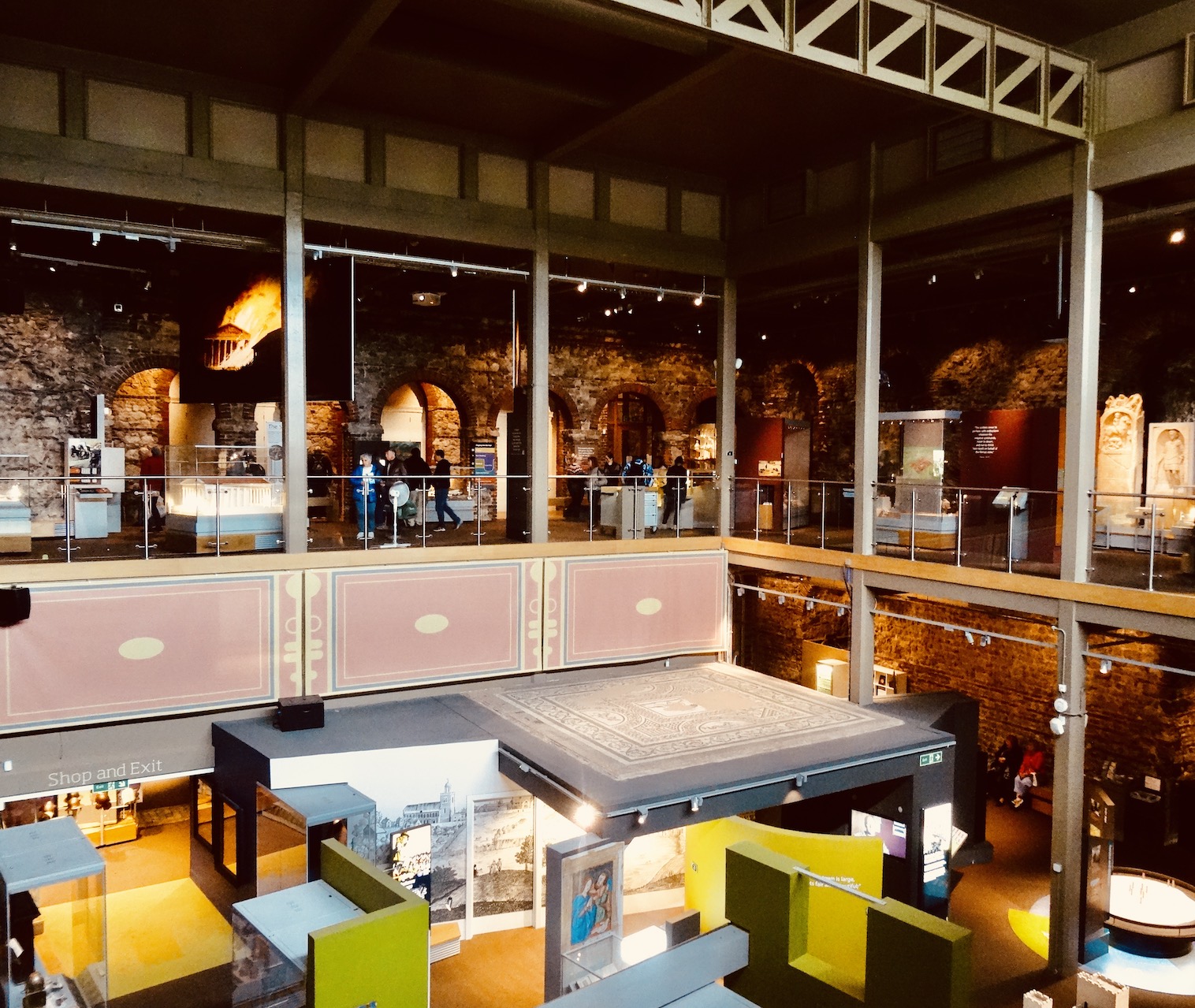