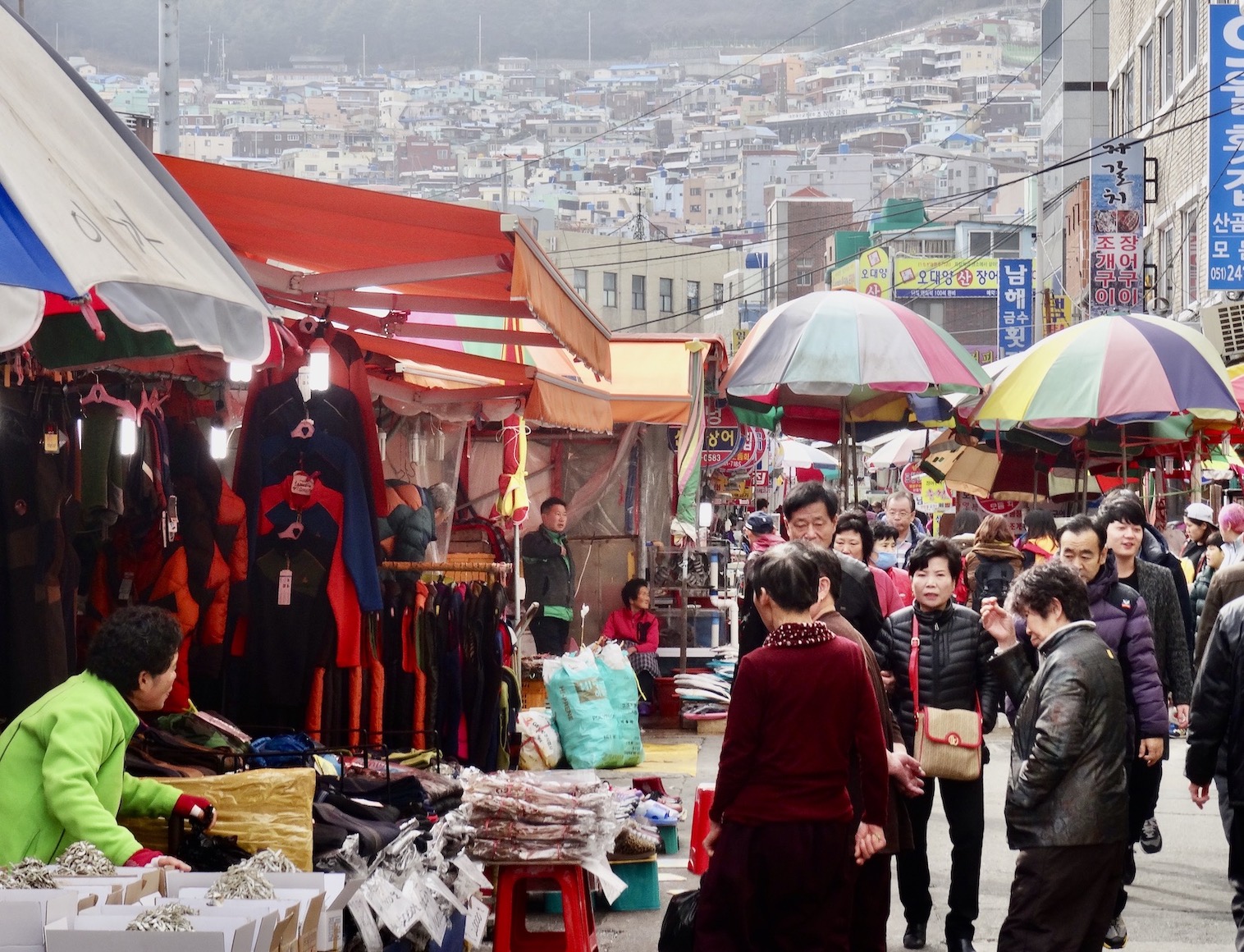 February 2015. While on the face of it Busan might seem like an unashamedly modern city, there are plenty of opportunities to tap into its roots. One such experience is the weird and wonderful Jagalchi Fish Market in the commercial district of Nampo-dong. Fittingly located on the edge of Busan Harbour, this is the biggest fish market in South Korea! 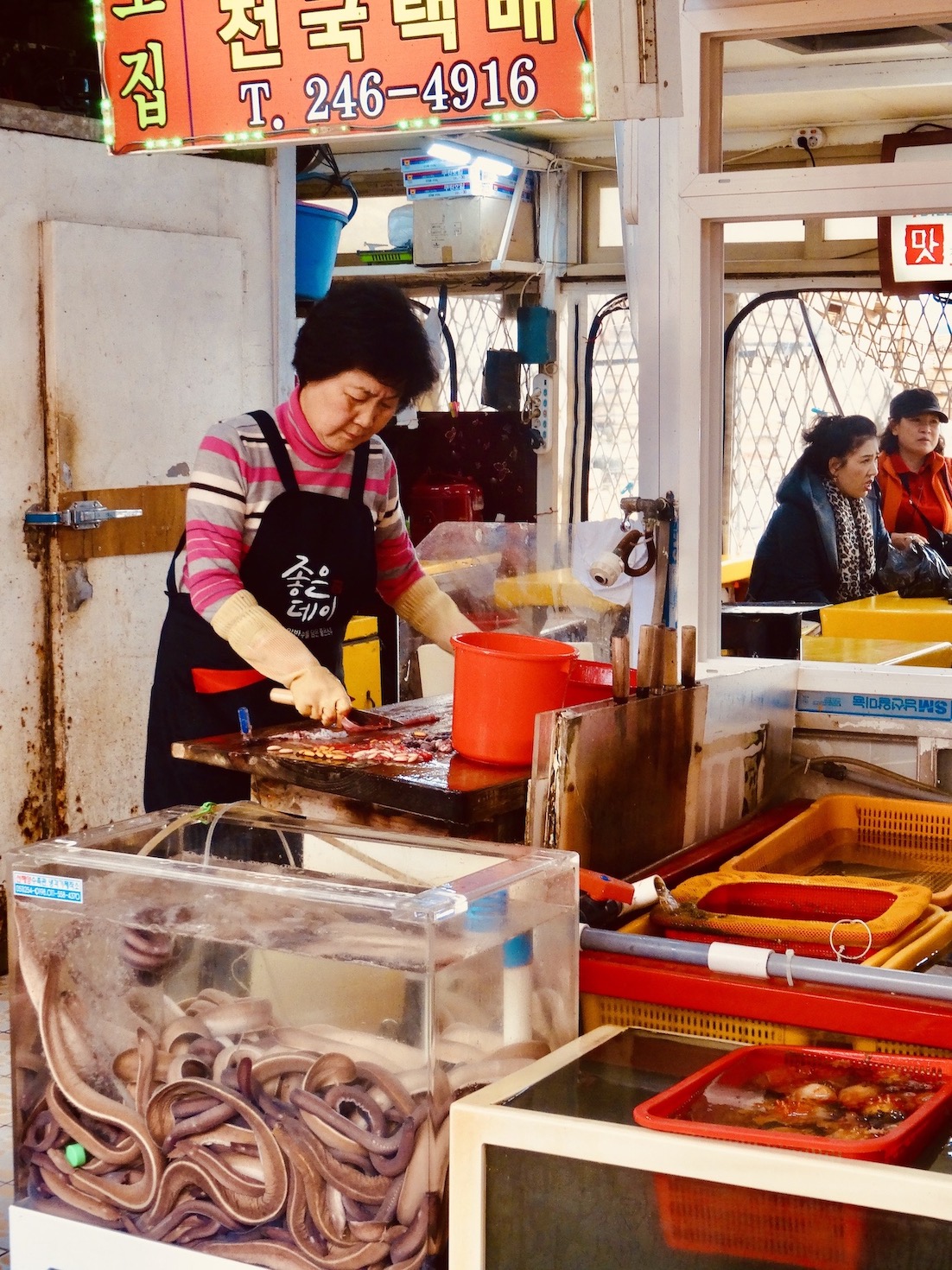 Every morning, in the hour before dawn, a fleet of fishing boats arrive at the harbour with their nightly hauls. The majority of it ends up at Jagalchi, where market vendors immediately begin cleaning and preparing everything for another day of trading. 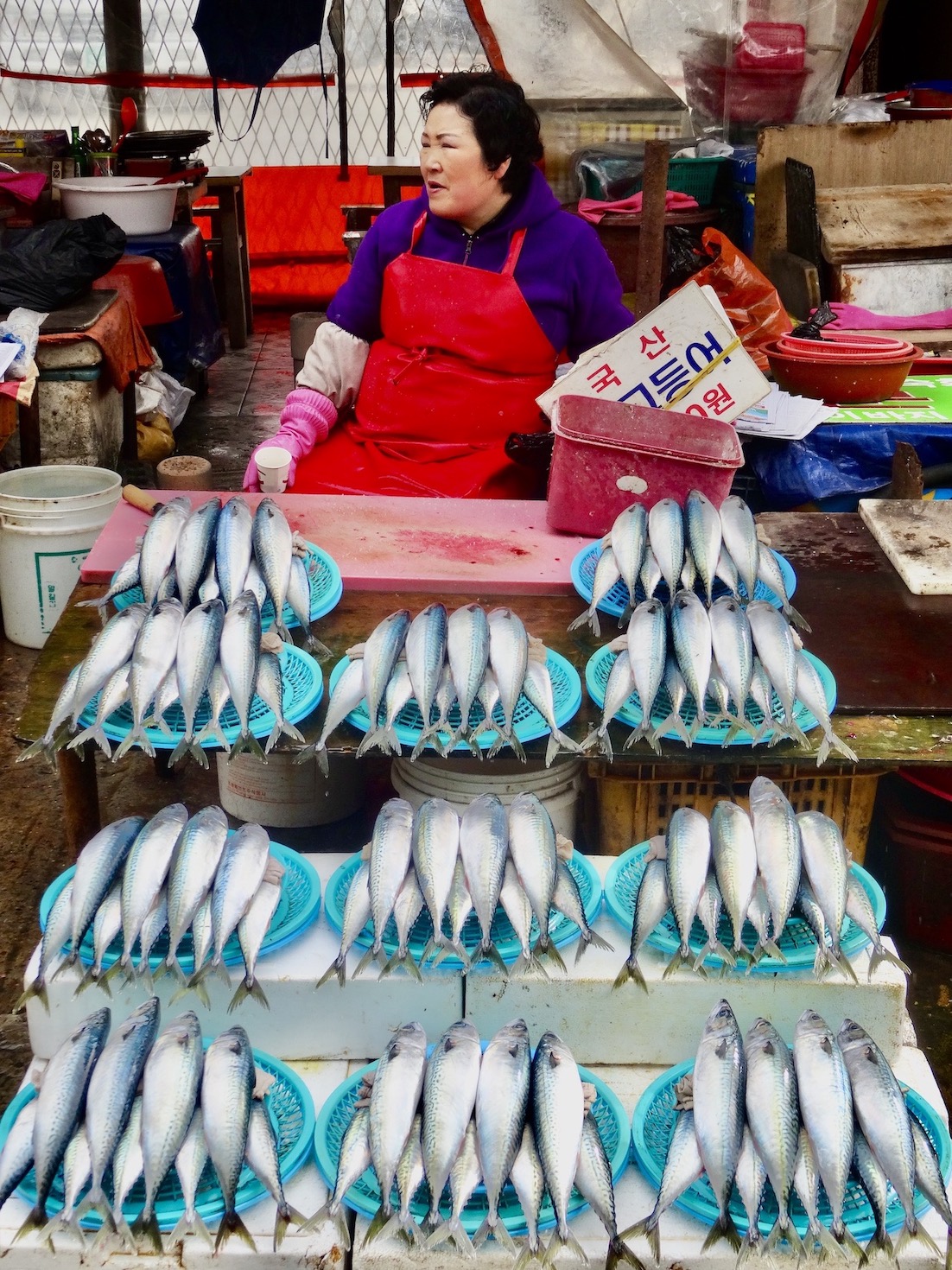 When I arrived on a chilly, grey February morning, Jagalchi was already in full swing. The first thing I realised is that the market is split into two sections.

The indoor part is a gargantuan, multi-story affair, home to countless stalls and restaurants. There’s also a cooking school in there! It was incredibly busy inside and, if truth be told, I found the pungent, crisscrossing aromas too much to deal with. 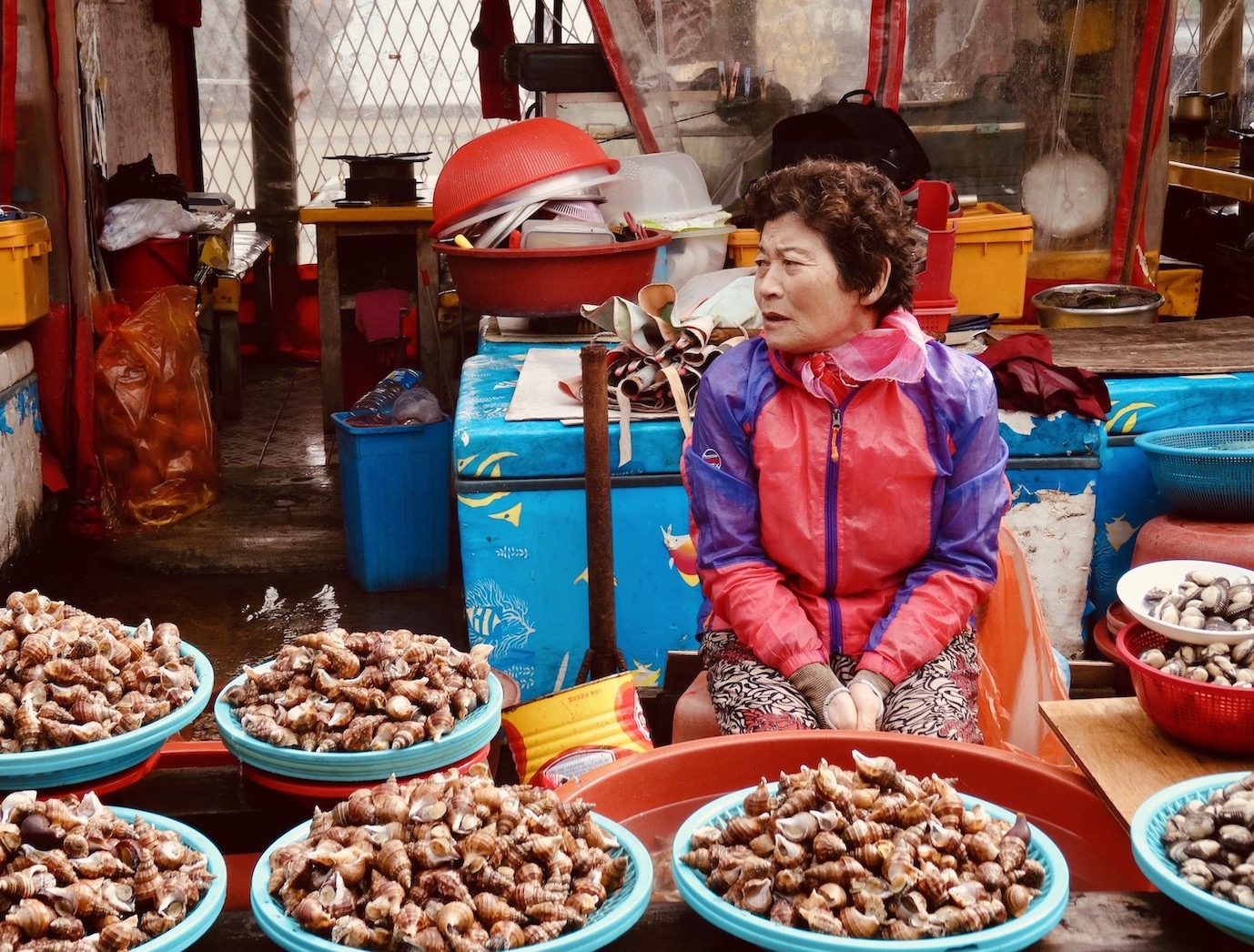 Hence I decided to stick to the outdoor area, where hundreds of vendors sit packed into a dozen or so narrow streets. There is so much fish here it’ll make your head spin, from cod, shrimps, eels and turban shells, to lobster, crabs, clams, octopus and swordfish.

For the most part, I can take or leave seafood. Thus for me the joy of my visit was all about people watching. Happily, the market offers a fascinating insight into local life. Take the stall owners themselves, for example, a collection of no-nonsense, curly haired women well practiced in the art of scowling. 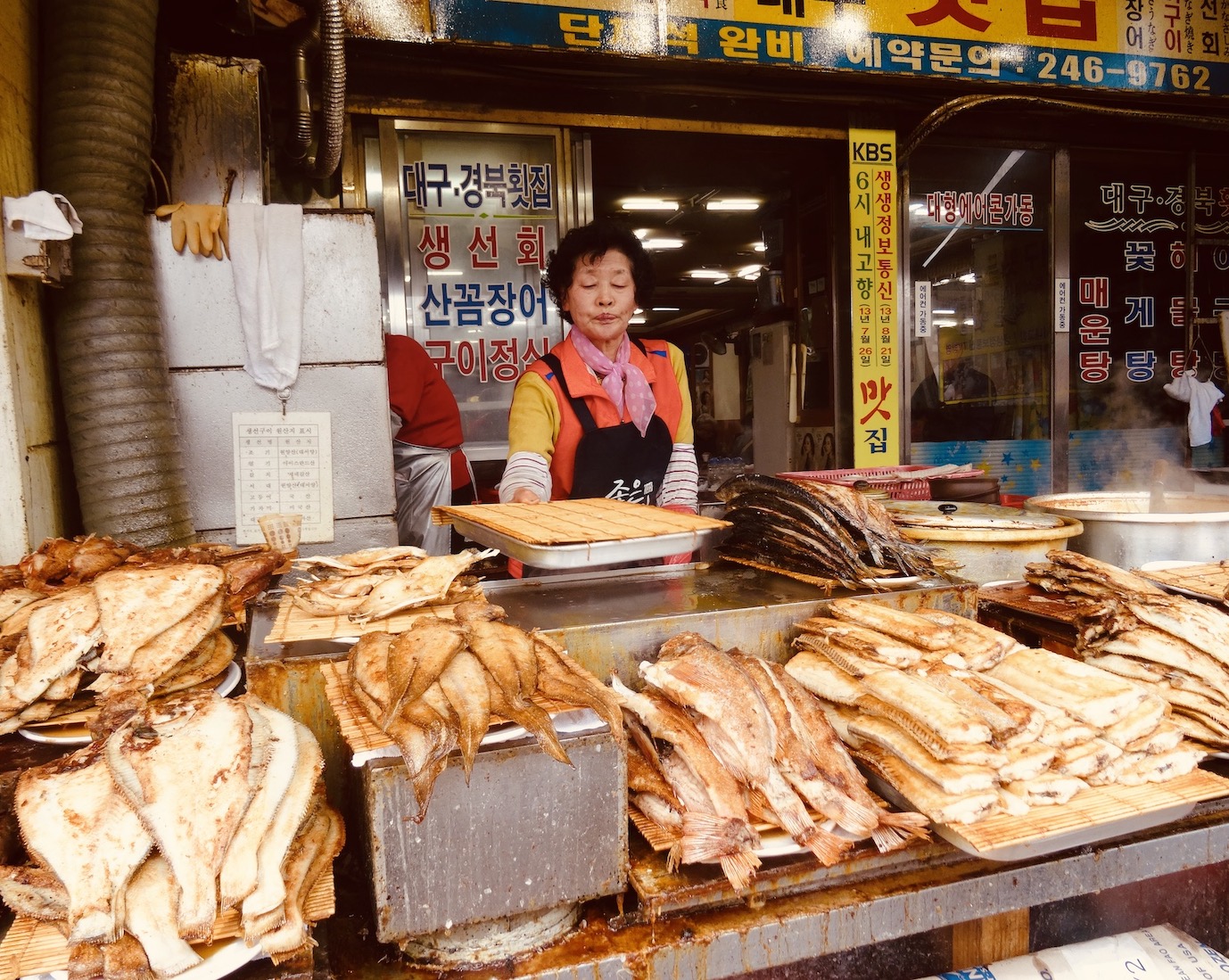 Apparently, the women here are both highly respected and feared by the people of Busan. Especially their husbands, many of which are the very fishermen who bring in the day’s goods. The ladies are nicknamed Jagalchi Ajumma, which roughly translates as “married fish market woman”.

While not exactly warm and cuddly, I liked how these women ignored curious foreigners like myself. In fact, there was no attempt to sell me anything and they didn’t object to my photo taking. I’ll put that down as two big wins. 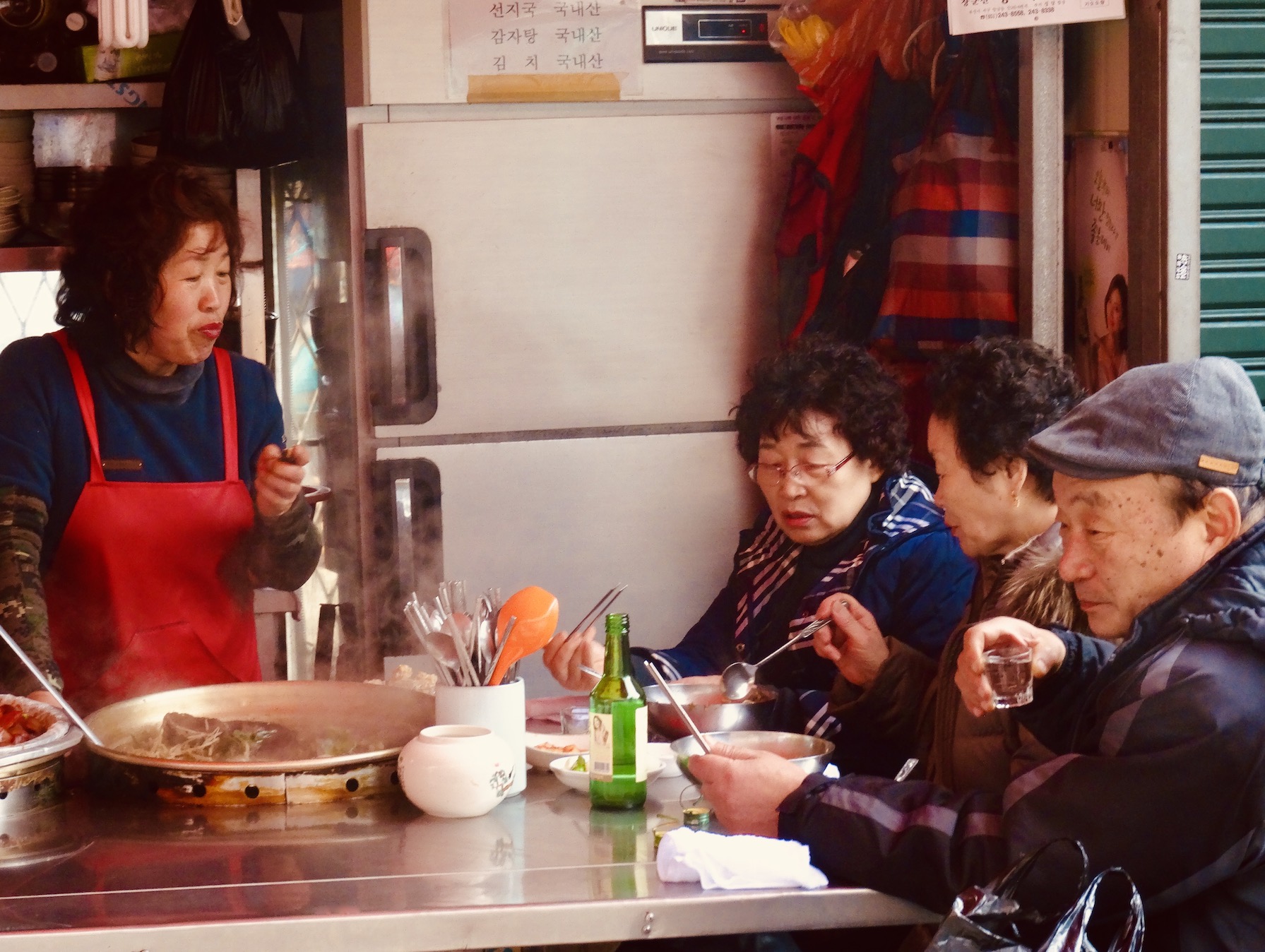 In addition to the many stalls, some of the shacks here are tiny, single table restaurants. In most cases there’s barely room for three or four people to squeeze in. Nevertheless, I managed to fit myself into a free spot for a bowl of this lady’s tangy cod ball soup.

It came with a small plate of chopped vegetables doused in sweet chilli sauce. I can’t help but wonder what’s happened to these restaurants since the outbreak of COVID-19. 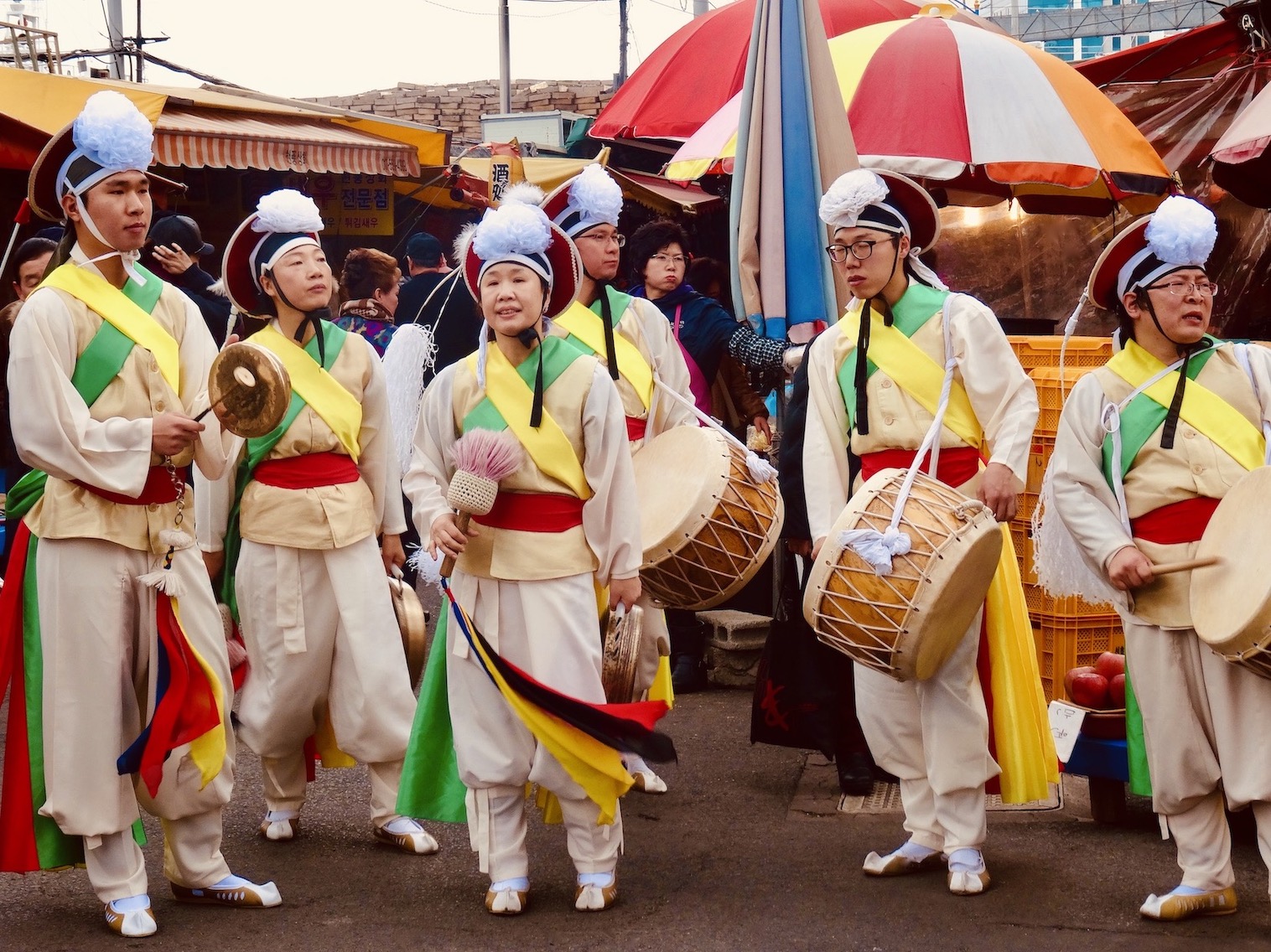 I was deep in the heart of the market when, suddenly, everyone’s ears pricked up at the sound of thumping drums and clattering gongs. Following the beat, I soon came across this group of musicians performing a traditional form of music called Pungmul. Spot the guy who REALLY wishes he were somewhere else.

Rooted in traditional farming culture, Pungmul comes in a variety of guises, with drumming as the main focus. That day there was no singing at all, just a booming, rhythmic drum beat quite unlike anything I’d heard before. 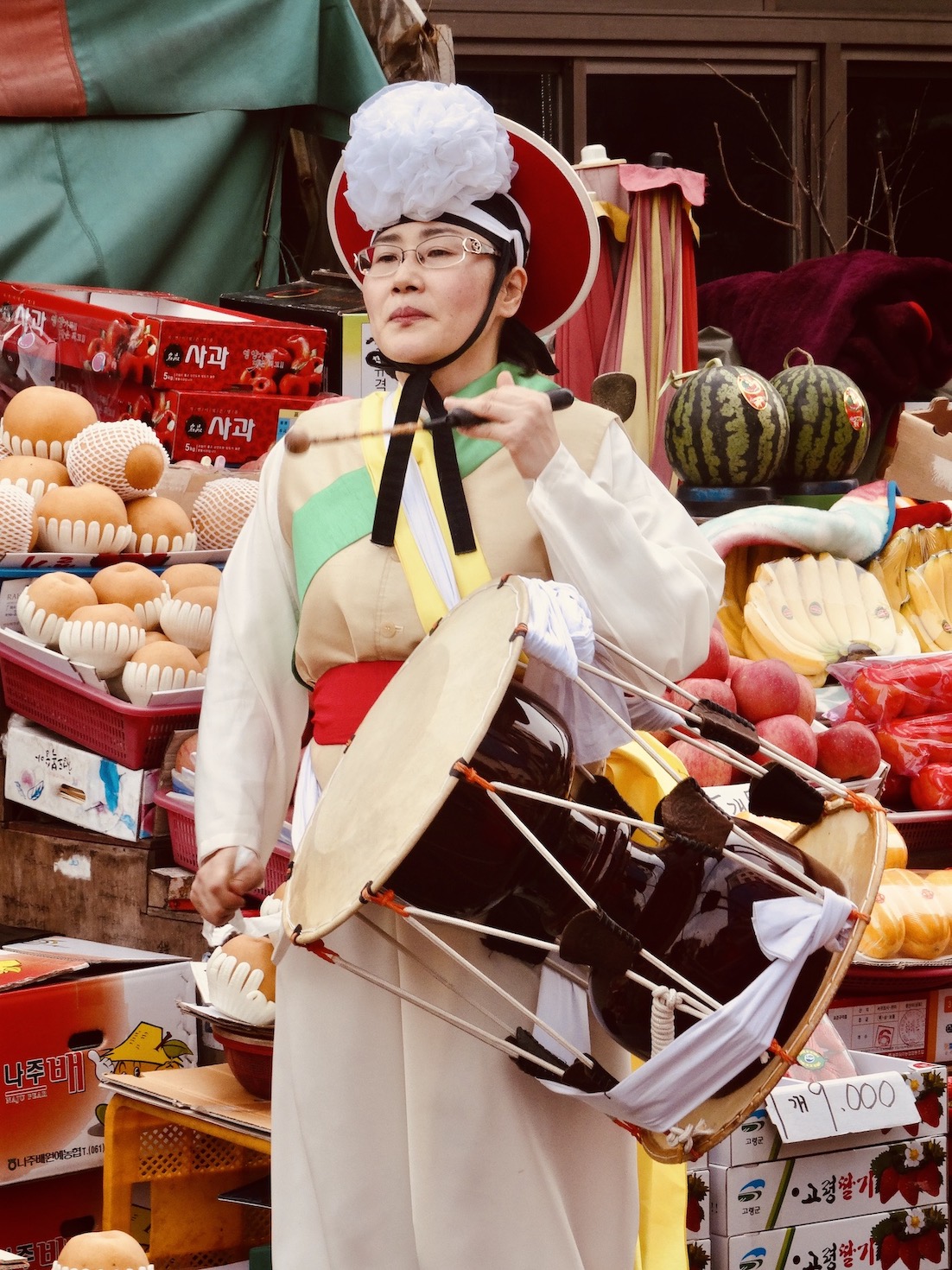 The drums themselves are amazing objects called janggu. Players generally strike the double headed hourglass shaped drums on both sides with wooden sticks. A leather strap, worn over the shoulder, holds the drum in place. 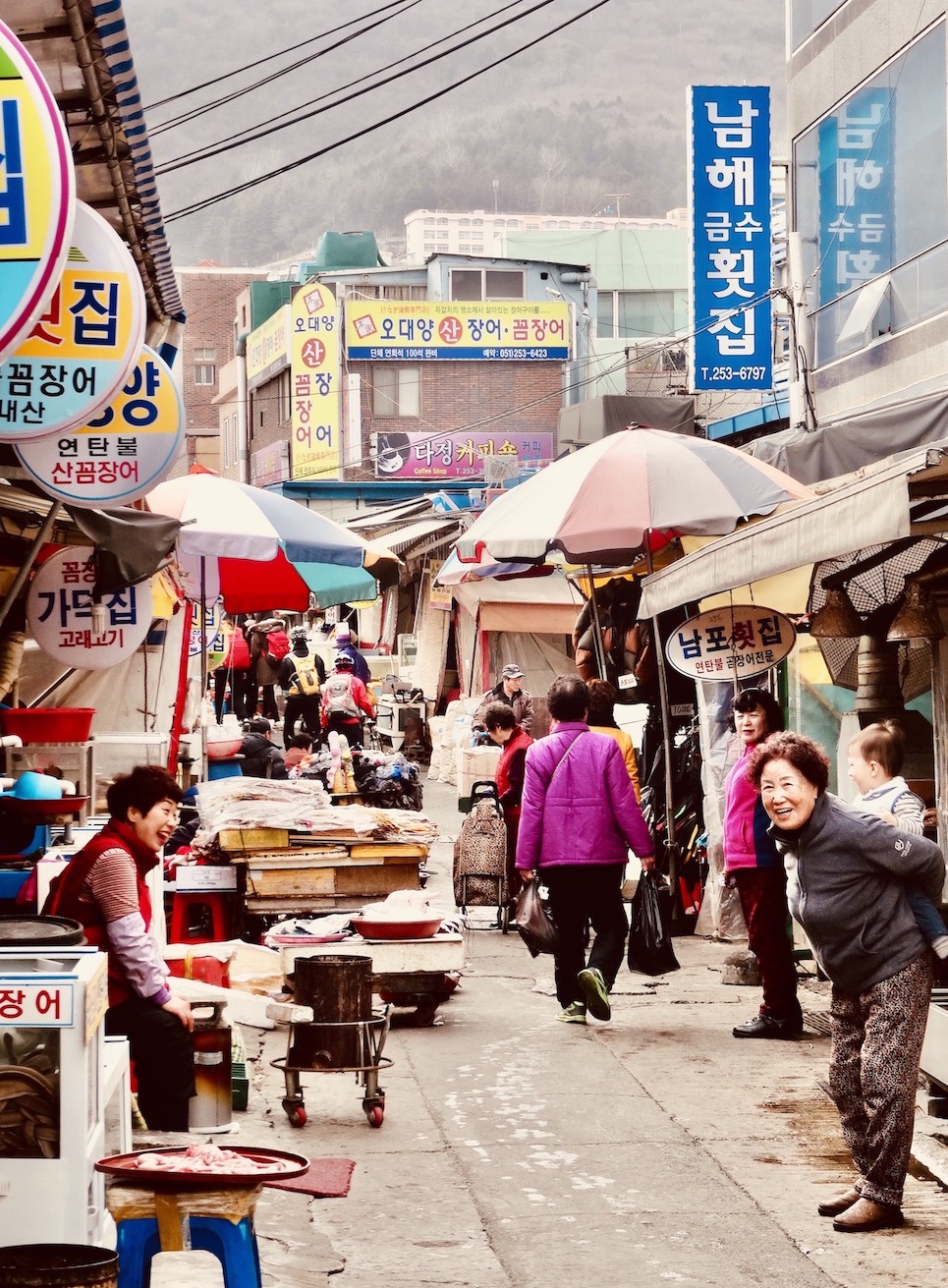 The drumming certainly came as a pleasant surprise. Even some of the ladies seemed cheered up by it, with much laughing and clapping going on among the stalls.

Jagalchi Fish Market opens its doors seven days a week from 08:00-22:00 and is free to enter. For an alternative view, check out this interesting article by Daily Travel Pill.