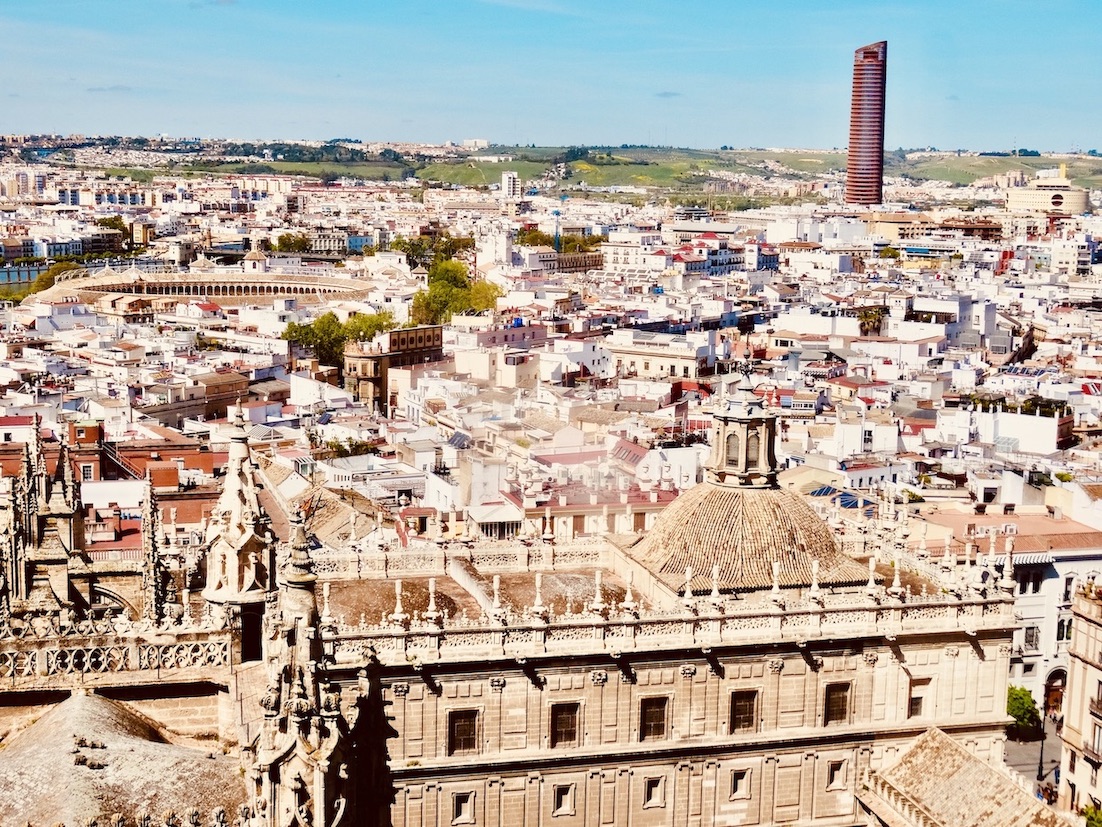 March 2017. I’ll always be grateful that I had so much time to explore Andalusia. However, if one should find themselves on a whistle stop tour, it’s hard to argue against putting Seville top of the list.

Following my reports from The Alcázar, Seville Cathedral and Plaza de España, this article rounds up the rest of my wanderings, with some Cool Spots Around Seville. 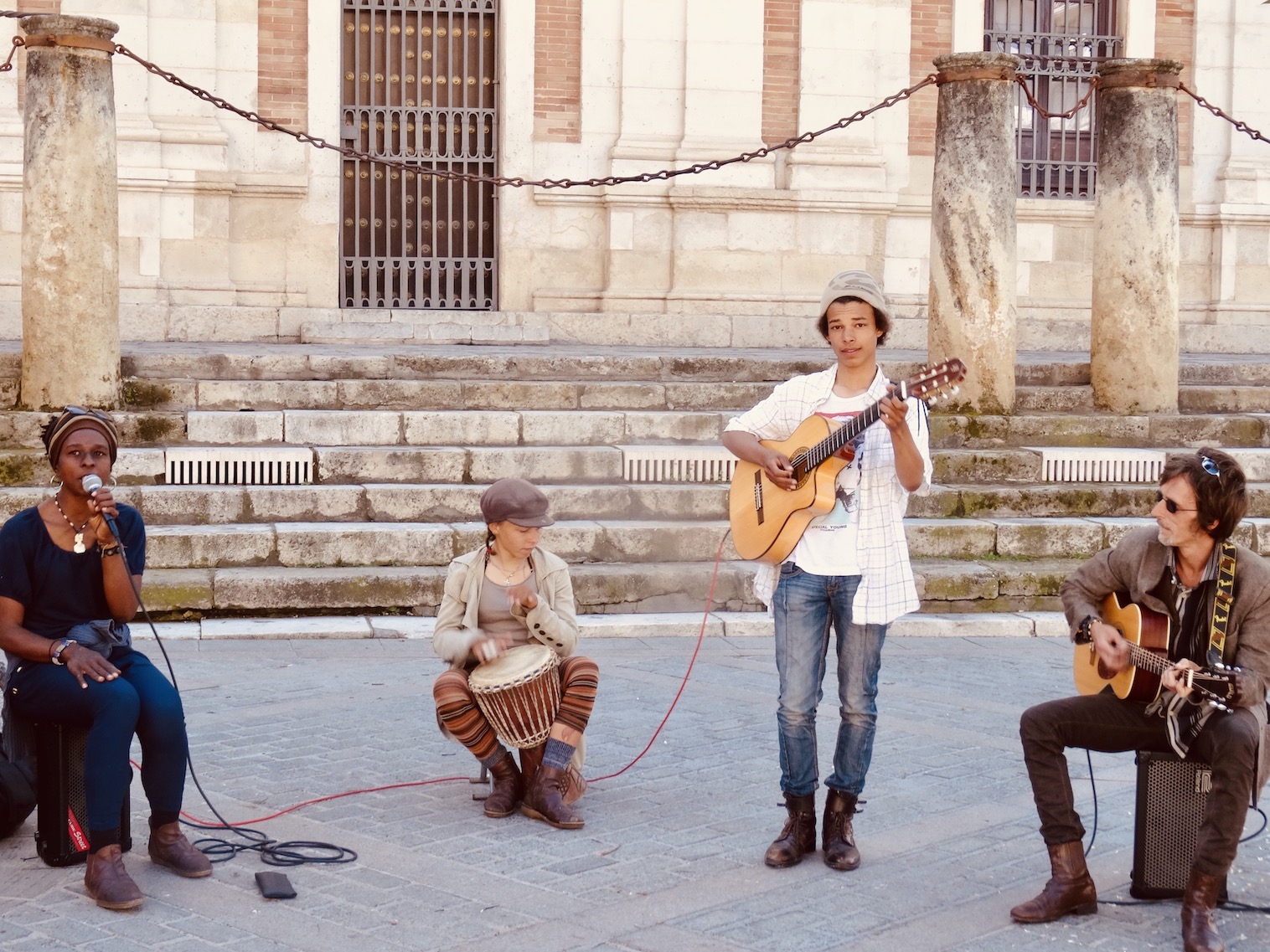 Having ticked off the monster sights, Wonderboy and I spent the rest of our time simply following our noses. The square and streets around Seville Cathedral quite literally burst with life.

Several bands offered live music. A mime artist drew kids in with his bag of tricks. Furthermore, I’ll never forget the man lumbering around dressed as Jesus Christ. He had a giant replica crucifix on his back and was attracting plenty of attention. If only all the interest had translated into tips for the poor guy. 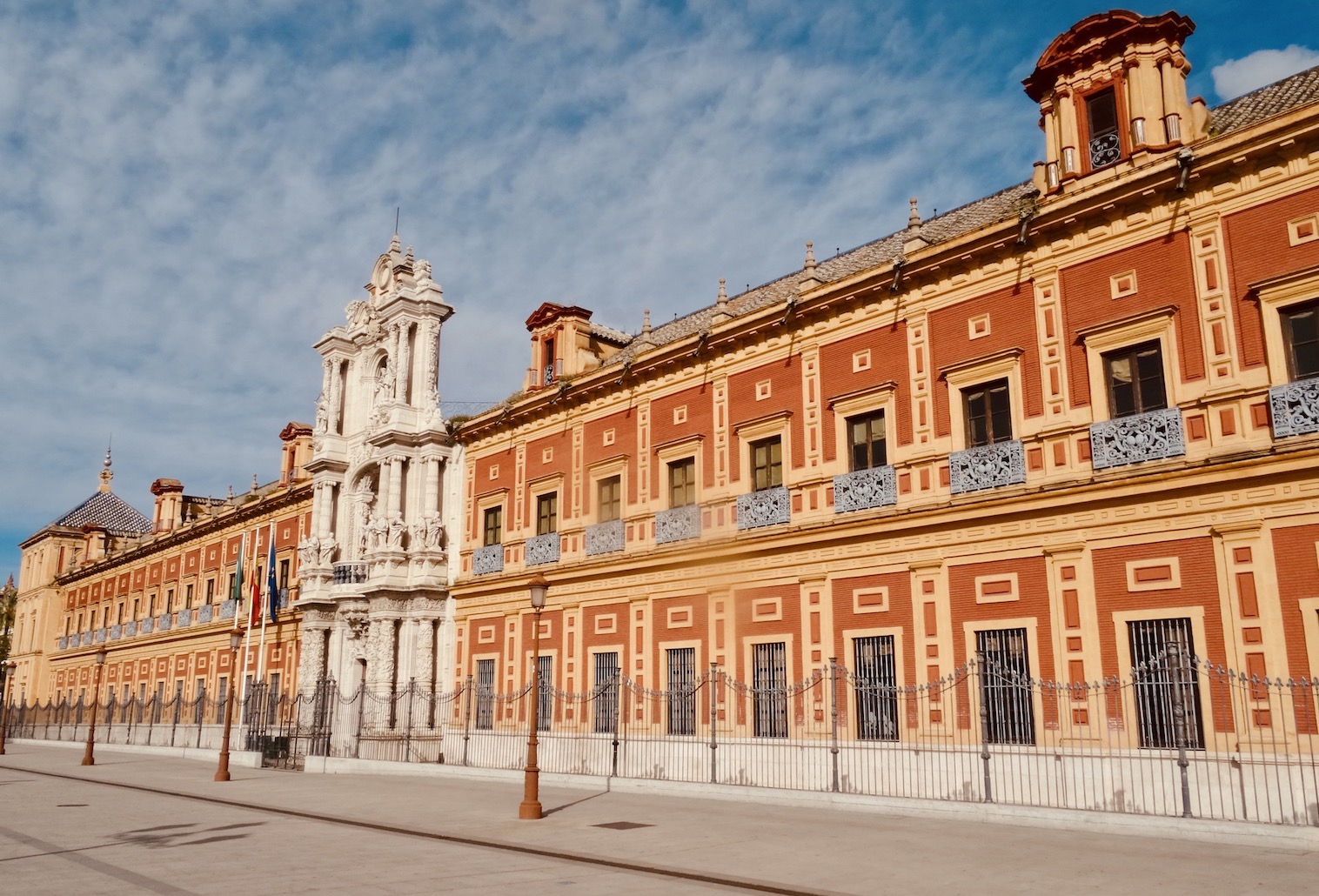 Wherever you are in Seville, the architecture is top notch. One of the most striking buildings is San Telmo Palace, a fine Baroque structure dating back to 1682. Designed by the architect Leonardo de Figueroa, the building initially stood as a school for the children of orphaned sailors.

Today it stands as the presidential headquarters of the Andalusian government. The building’s warm, yellow and orange exterior features statuette tributes to twelve of Seville’s most celebrated sons.

Among those honoured, are the 16th century poet Fernando de Herrera, the Baroque painter Bartolomé Esteban Murillo and Lope de Rueda, a writer considered to be the precursor to Spain’s golden age of literature. 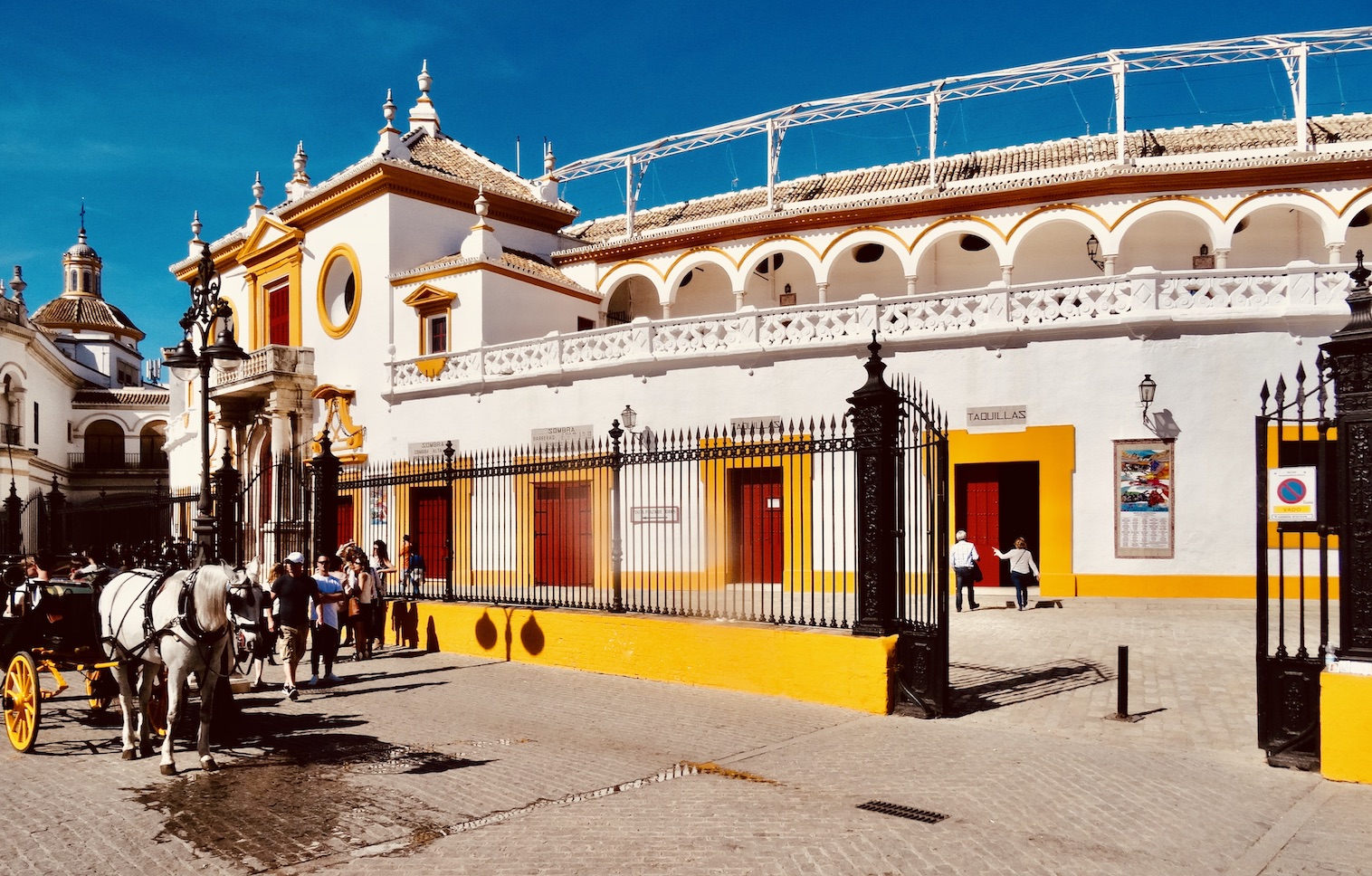 Another impressive building is La Maestranza, Spain’s oldest bullring. Built in the baroque style, construction began in 1749 and took sixteen years to complete.

The 14000 capacity stadium has hosted some of the country’s most legendary bullfighting events, which you can learn about in the onsite museum. Entrance tickets go for €8 and include both the museum and a walk around the ring itself. Look out for the very cool photographs of Orson Welles at the venue in the mid 1960s. 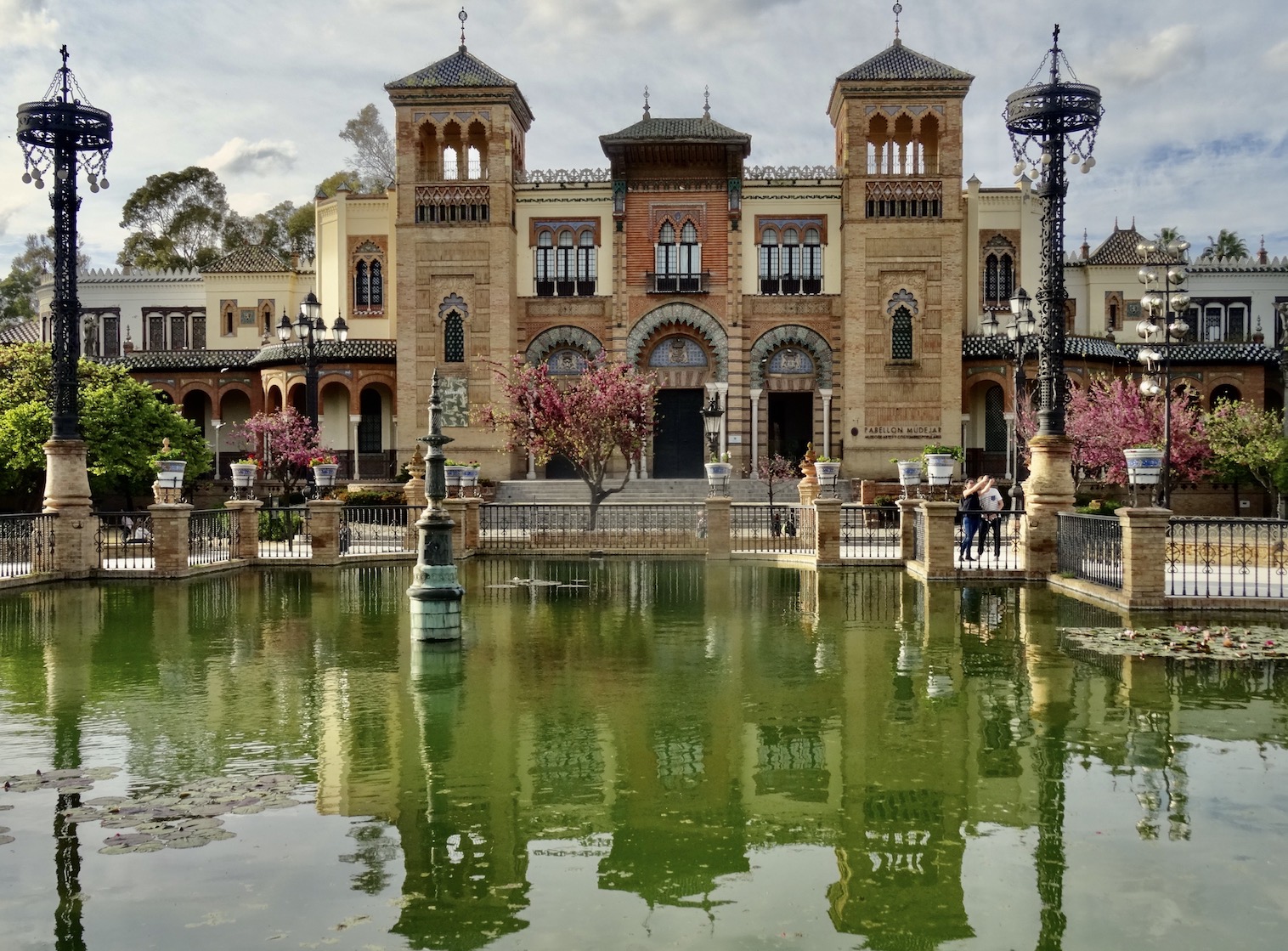 Museum of Popular Arts and Traditions.

One of my favourite Seville buildings is the stunning Museum of Popular Arts and Traditions. It sprang up in 1927 as part of the city’s huge redevelopment project in preparation for the 1929 Spanish American-World’s Fair Exhibition. 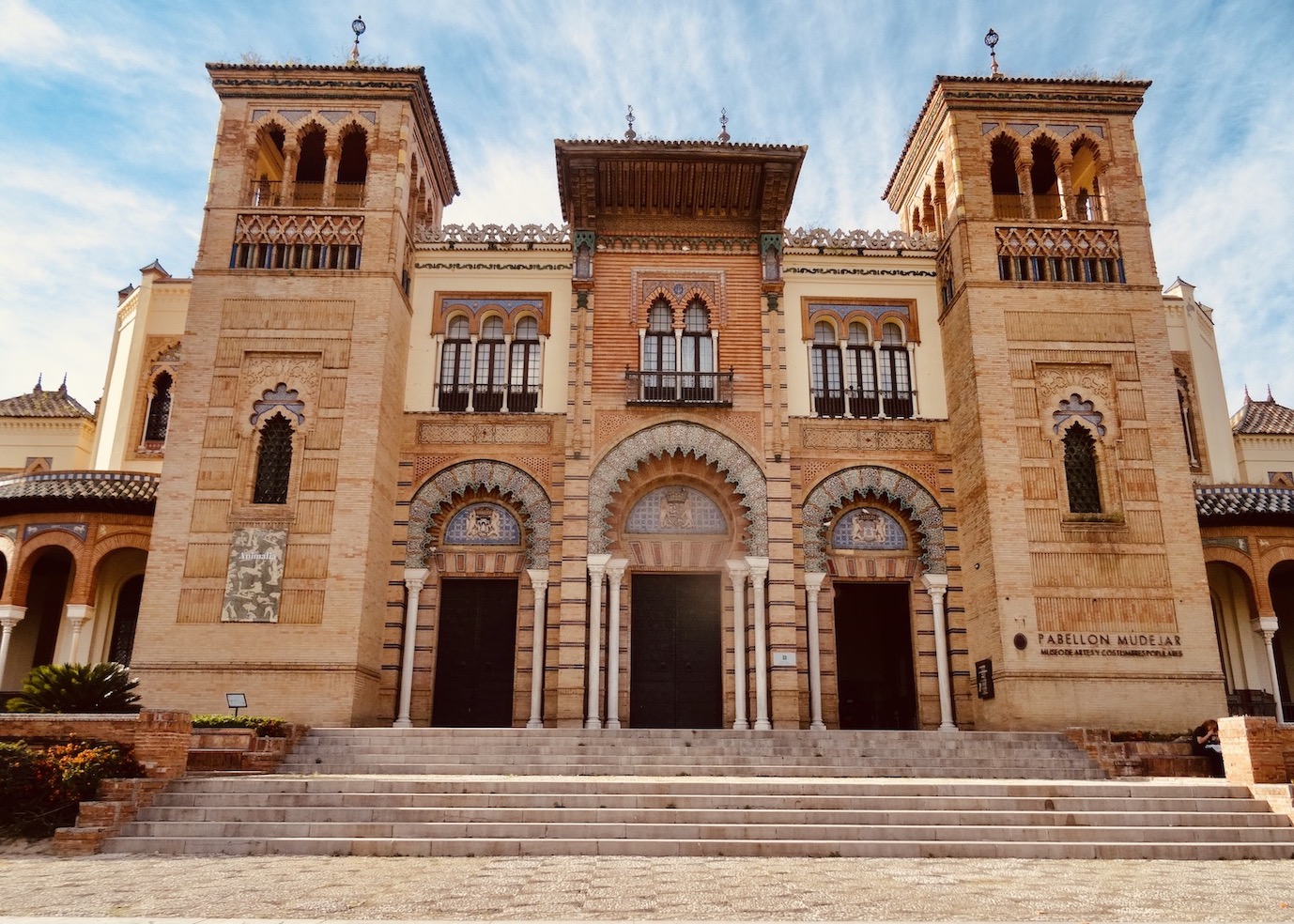 Back in 1929 it housed an architectural exhibition, while today’s museum showcases collections of regional ceramics and crafts.

Moreover, you can find a reconstruction of a 19th century Seville house on the first floor. The museum also has, according to some, the finest collection of lace and embroidery in Europe. Entry is free for EU citizens, everyone else has to pay €1.50. 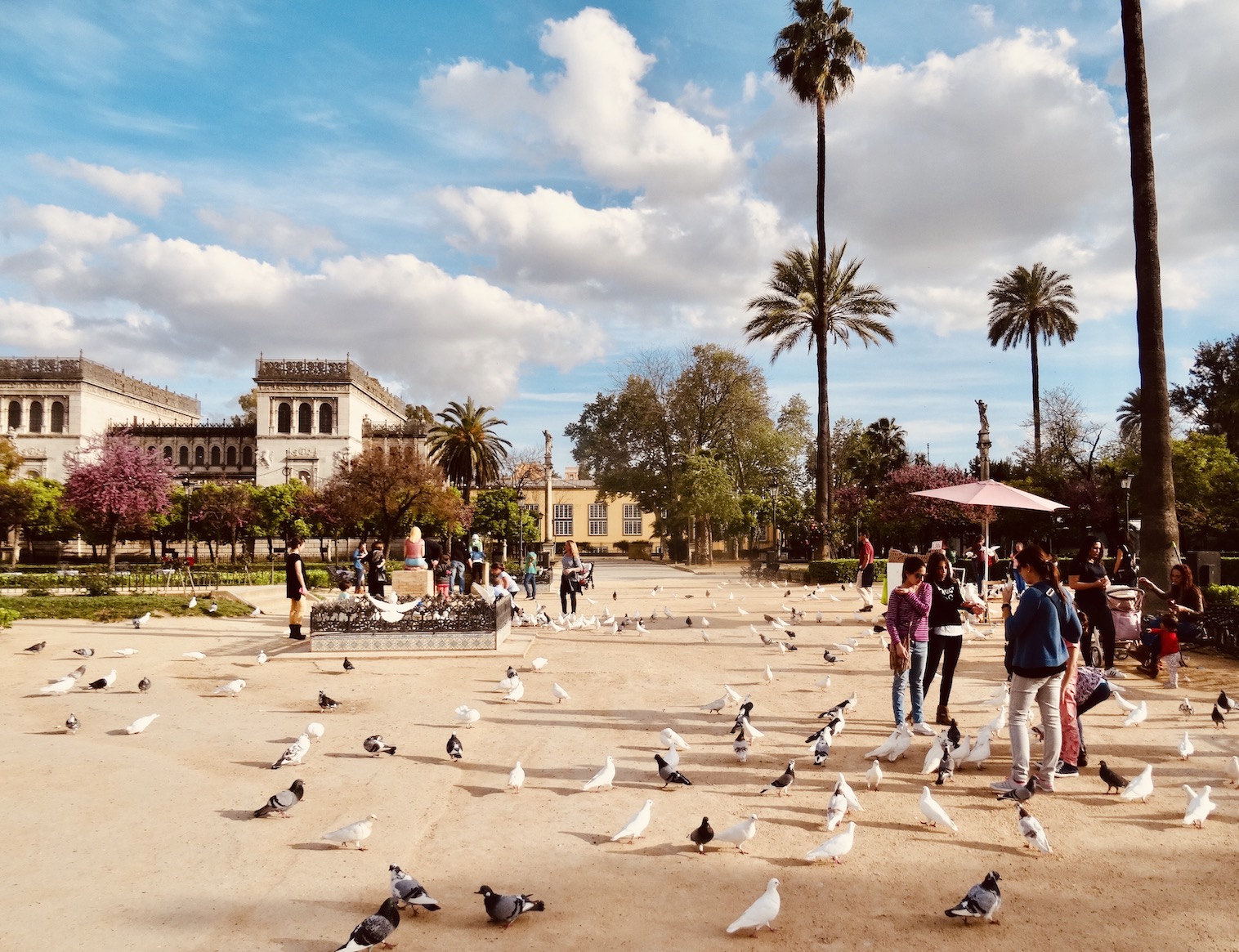 From The Museum of Popular Arts and Traditions, it’s a mere hop, skip and a jump to the pigeon-friendly Plaza de América. This large, sandy square forms part of Maria Luisa Park and is a popular meeting spot for walking tours. Nearby sights include The Archaeological Museum and The Royal Pavilion. 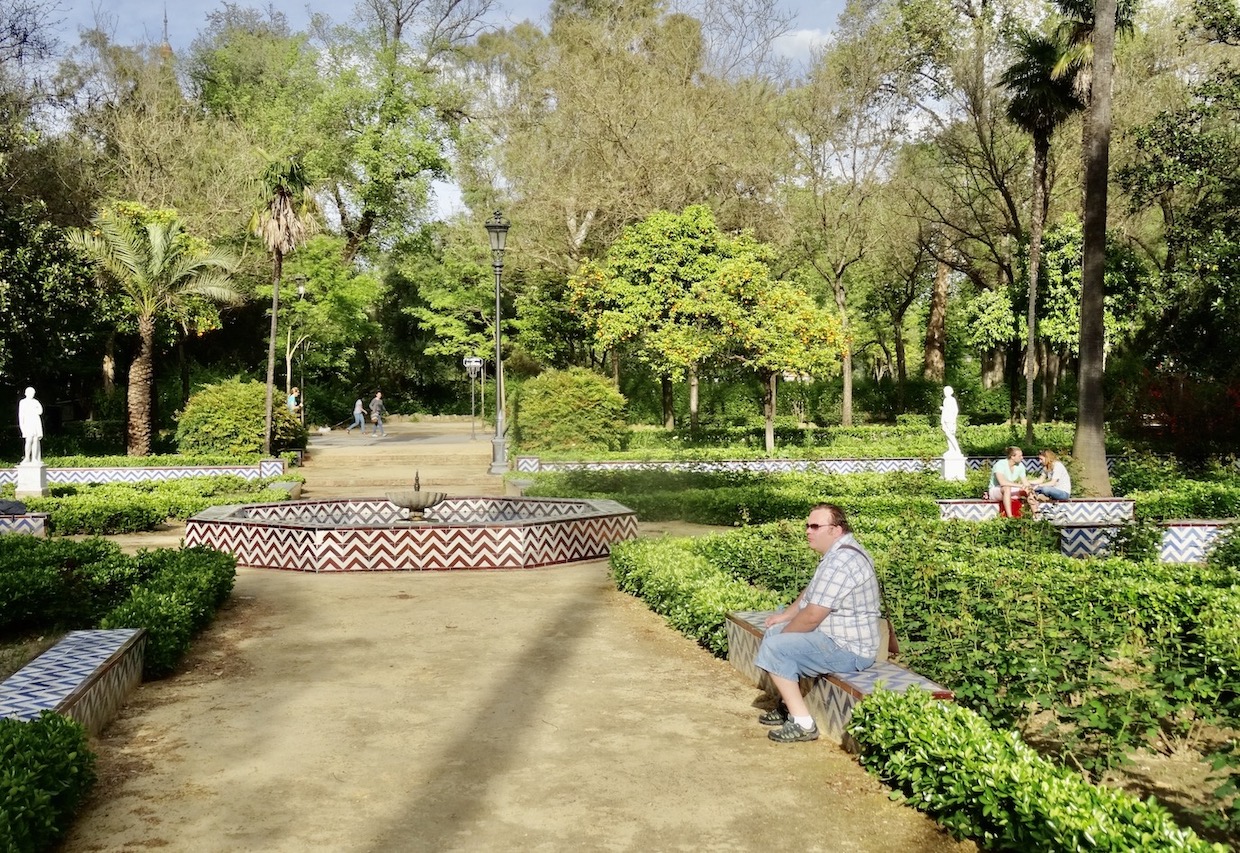 We spent several hours mooching around Maria Luisa Park. After visiting its exceptional focal point, Plaza de España, we idled the time away chatting on various benches under the orange trees.

In fact, it was here that Wonderboy and I hatched a plan for him to join me at the English language school I’d soon be working at in southeast China. 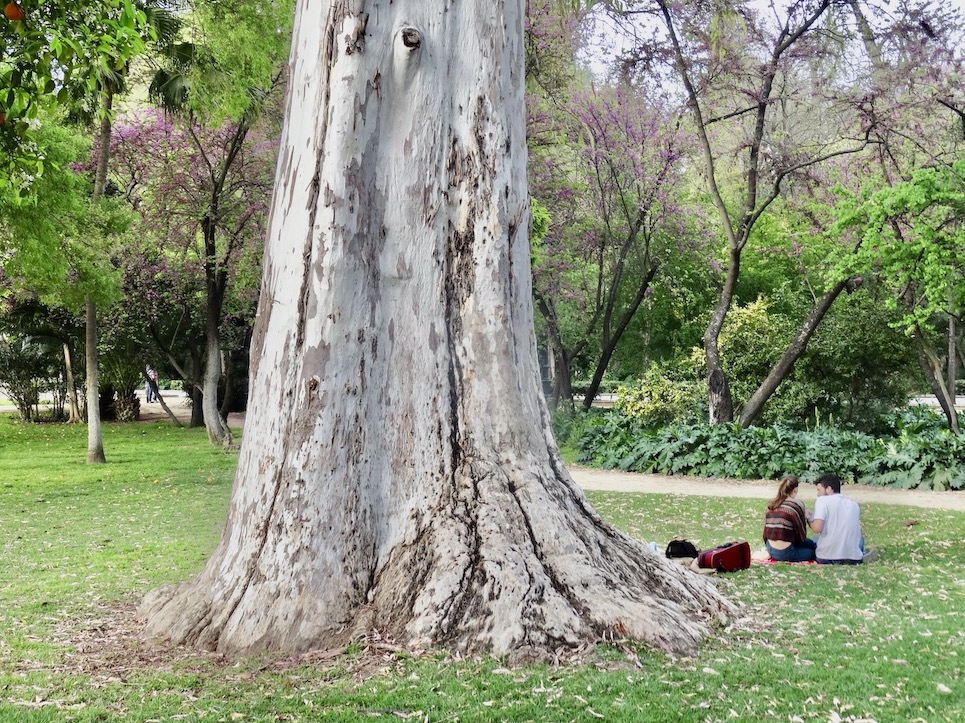 First, he’d need to complete his TEFL course. Then, I’d recommend him to the school. Of course, he’d pass the interview with flying colours and I’d collect the considerable recruitment bonus on offer.

I remember it all feeling a bit pie in the sky that day in the Spanish sunshine. And yet, just over five months later, Wonderboy arrived at my apartment in China with a suitcase, a backpack and a cheesy grin. Sometimes life can be deceptively simple. 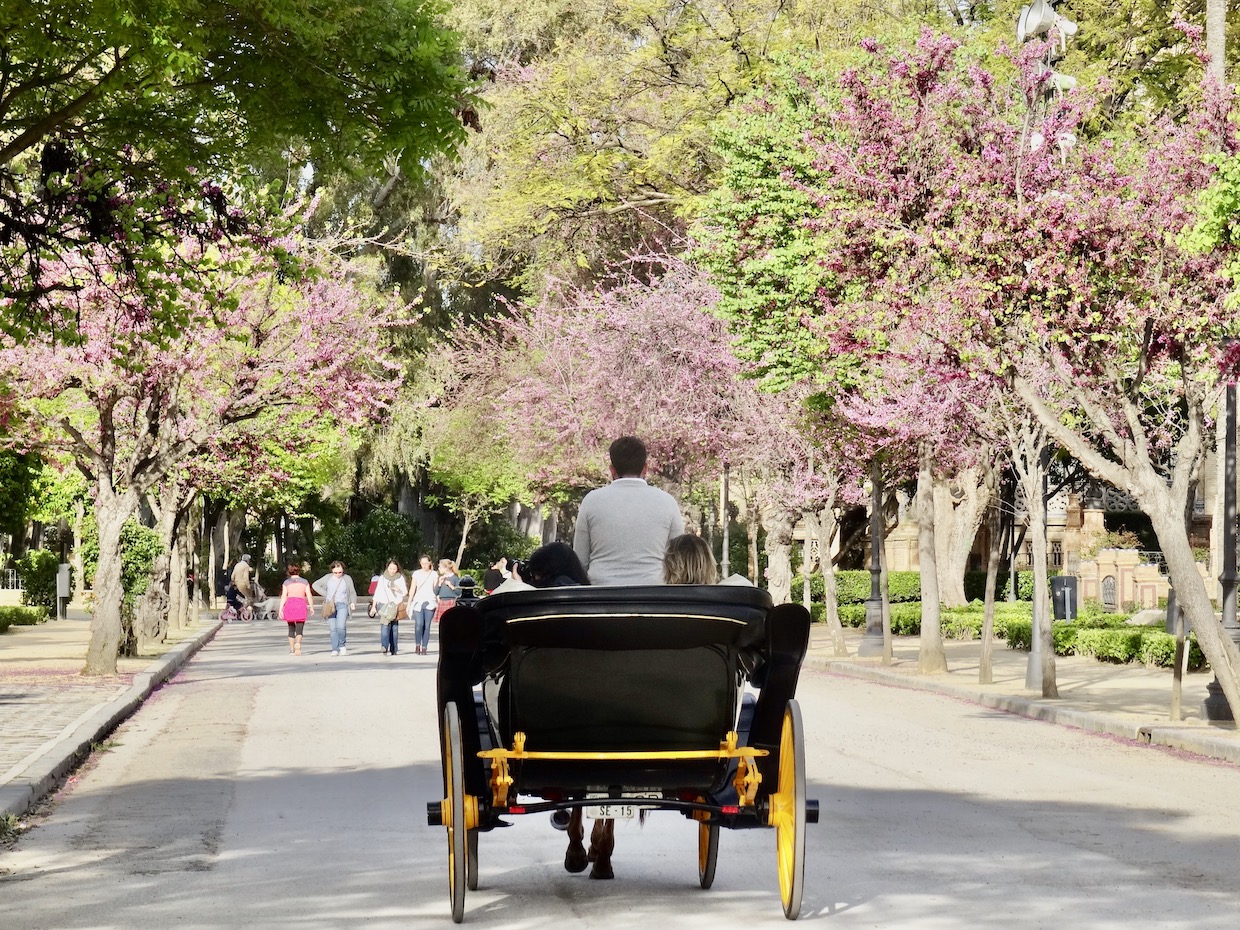 Elsewhere, Maria Luisa Park has Moorish ponds and fountains, hundreds of Mediterranean pines and the regular clip clop of horses’ hooves as carriages clunk down the avenues. No wonder it’s rated one of Europe’s prettiest parks. 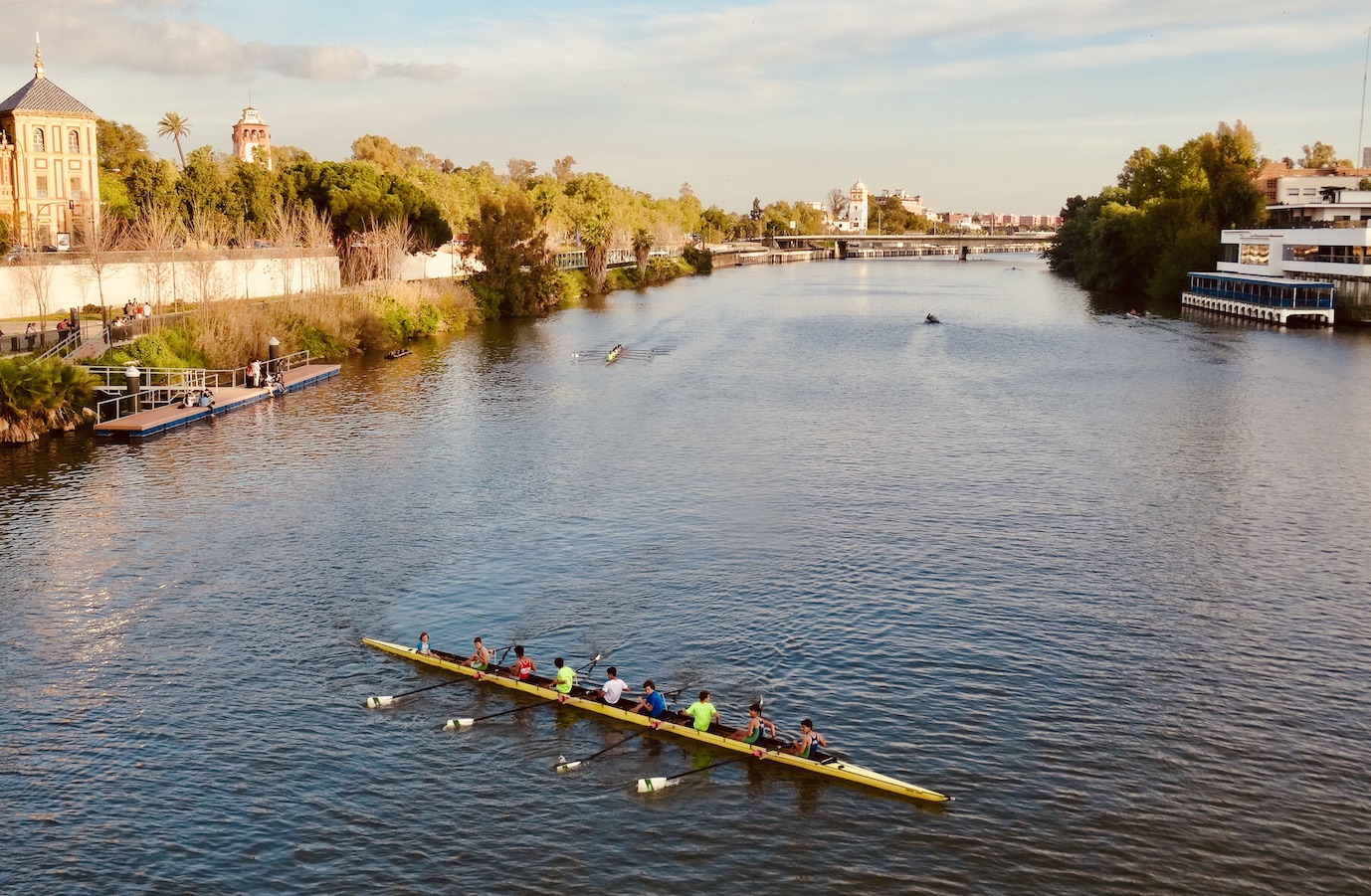 From the park we made a determined path towards The Guadalquivir River. It was a fine day, as it usually is in Seville. Hence there was rowing on the river and scores of people inhabiting the various waterside cafes, bistros and hookah bars.

At a whopping 657 kilometres, The Guadalquivir River spans the entire province of Andalusia! Furthermore, it has played a major role in Seville’s historical growth. For example, it was right here that Ferdinand Magellan set sail on the very first voyage around the world in 1519. 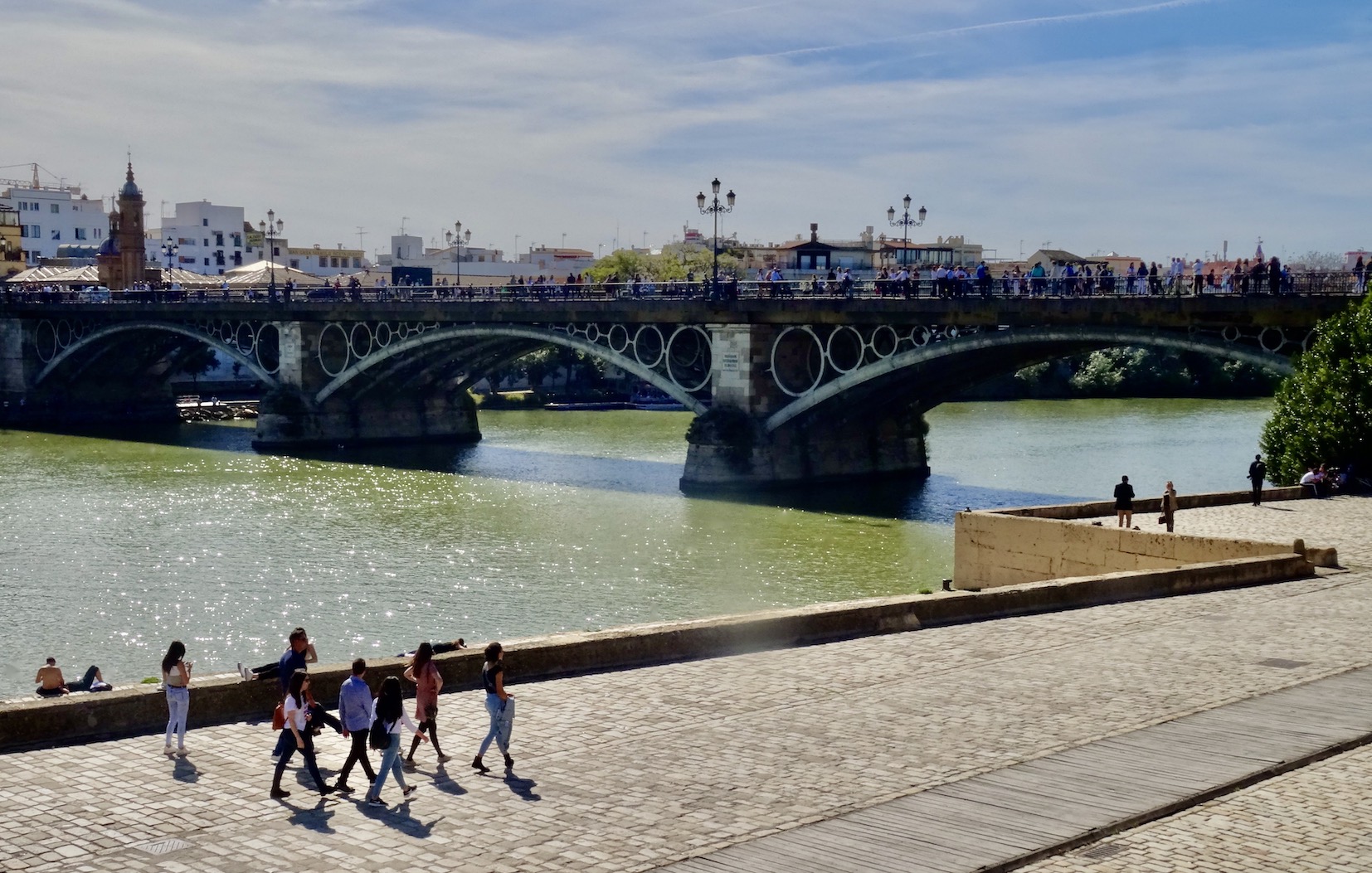 Our riverside walking route took in numerous parks and bridges. Of these, I especially liked Triana Bridge, a handsome iron arch structure unveiled in 1852. Standing as the city’s oldest bridge, it connects Seville’s historical centre with the down to earth market neighbourhood, Triana. 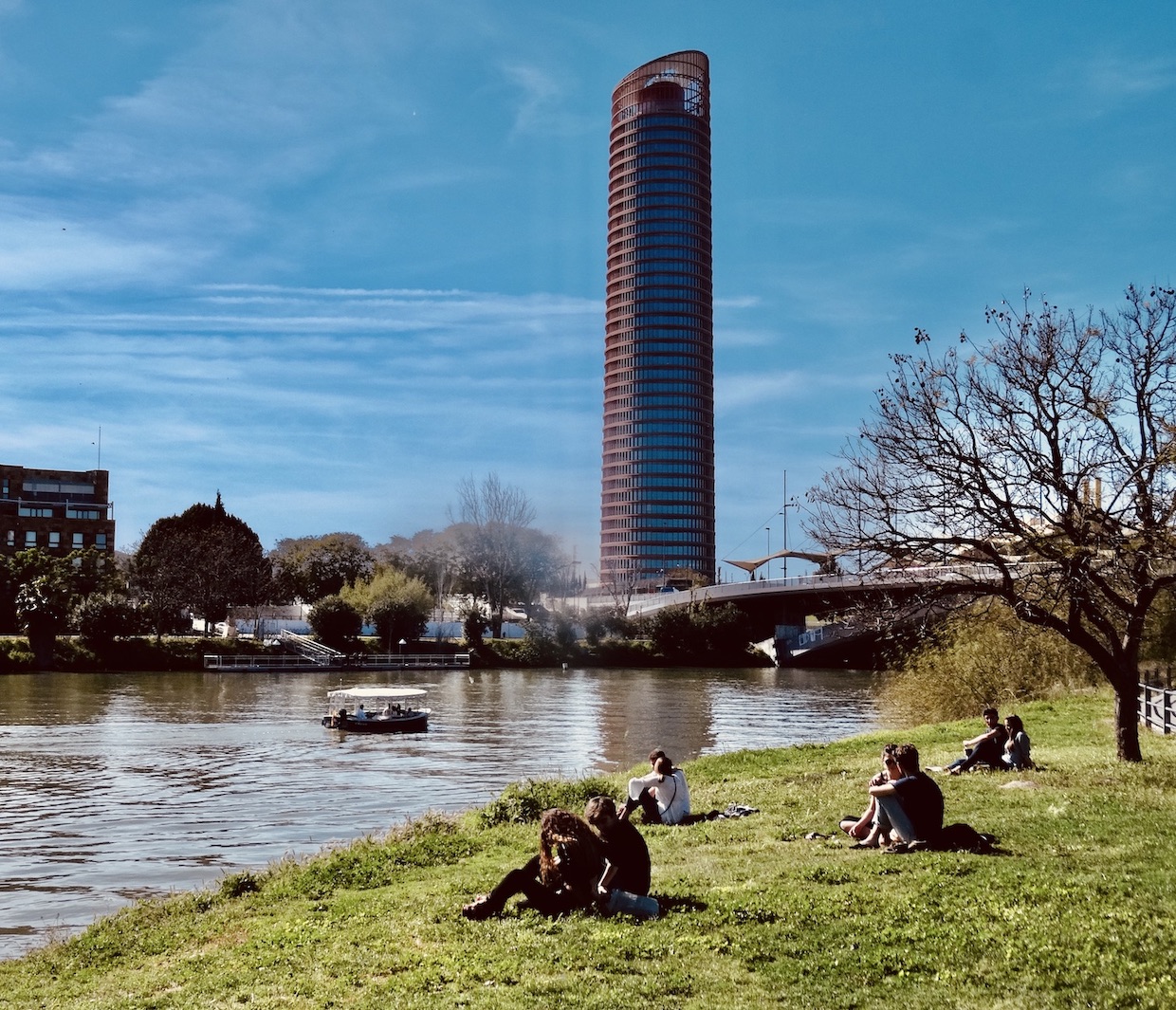 All the while, it’s impossible to take one’s eyes off Seville Tower, the city’s first ever skyscraper. Home to offices, a five star hotel and a floor of luxury apartments, it stands in stark contrast to the classical architecture of the old town. As a result, there’s been much controversy since it opened in 2015. 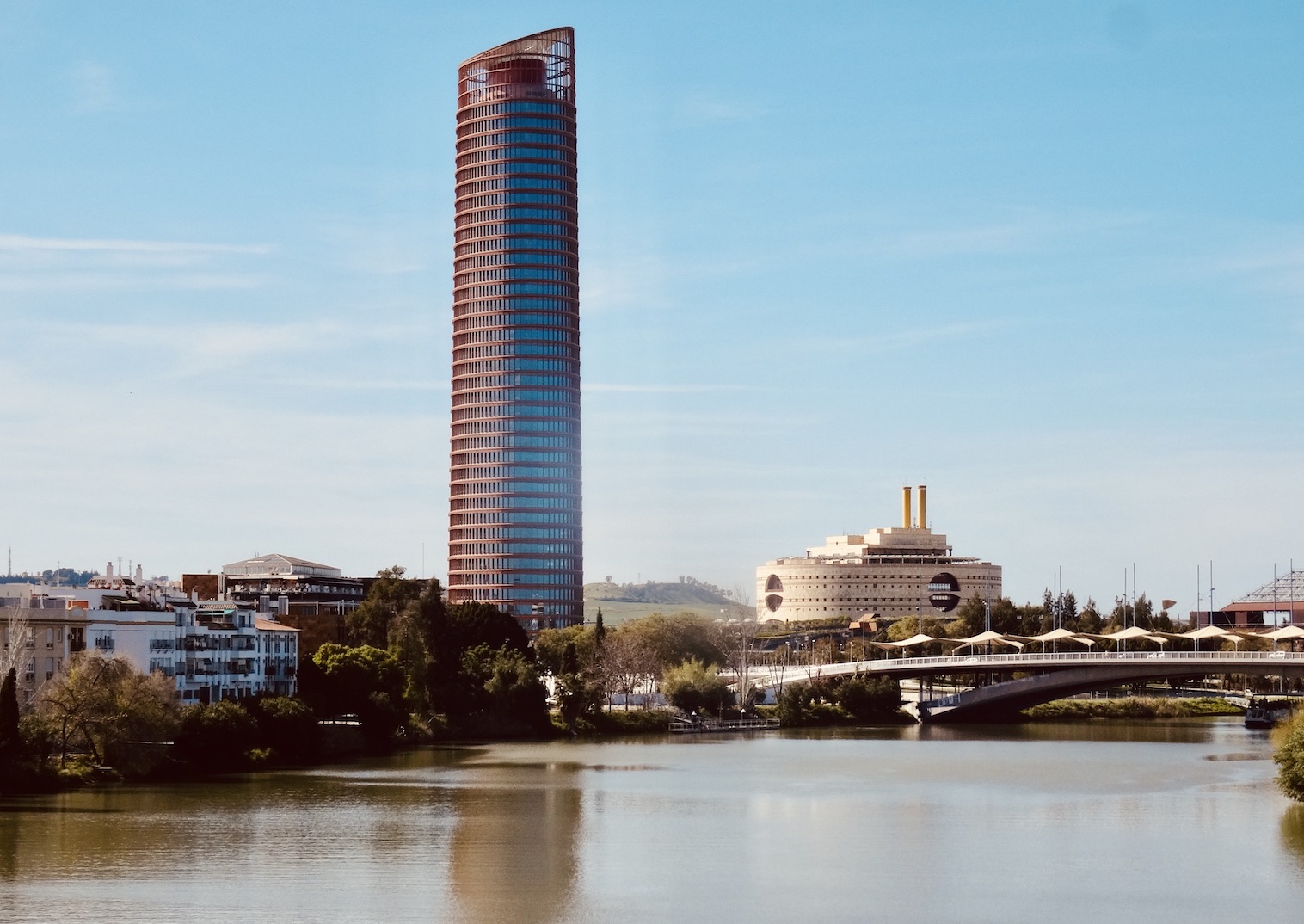 Apparently, UNESCO were so appalled they actually considered putting Seville’s historical monuments on the threatened list, due to the tower’s negative impact on the skyline.

The peculiar building to the right of the tower that looks a bit like a postmodern cruise ship is the Torre Triana. Don’t get too excited, it’s simply an administrative government building. 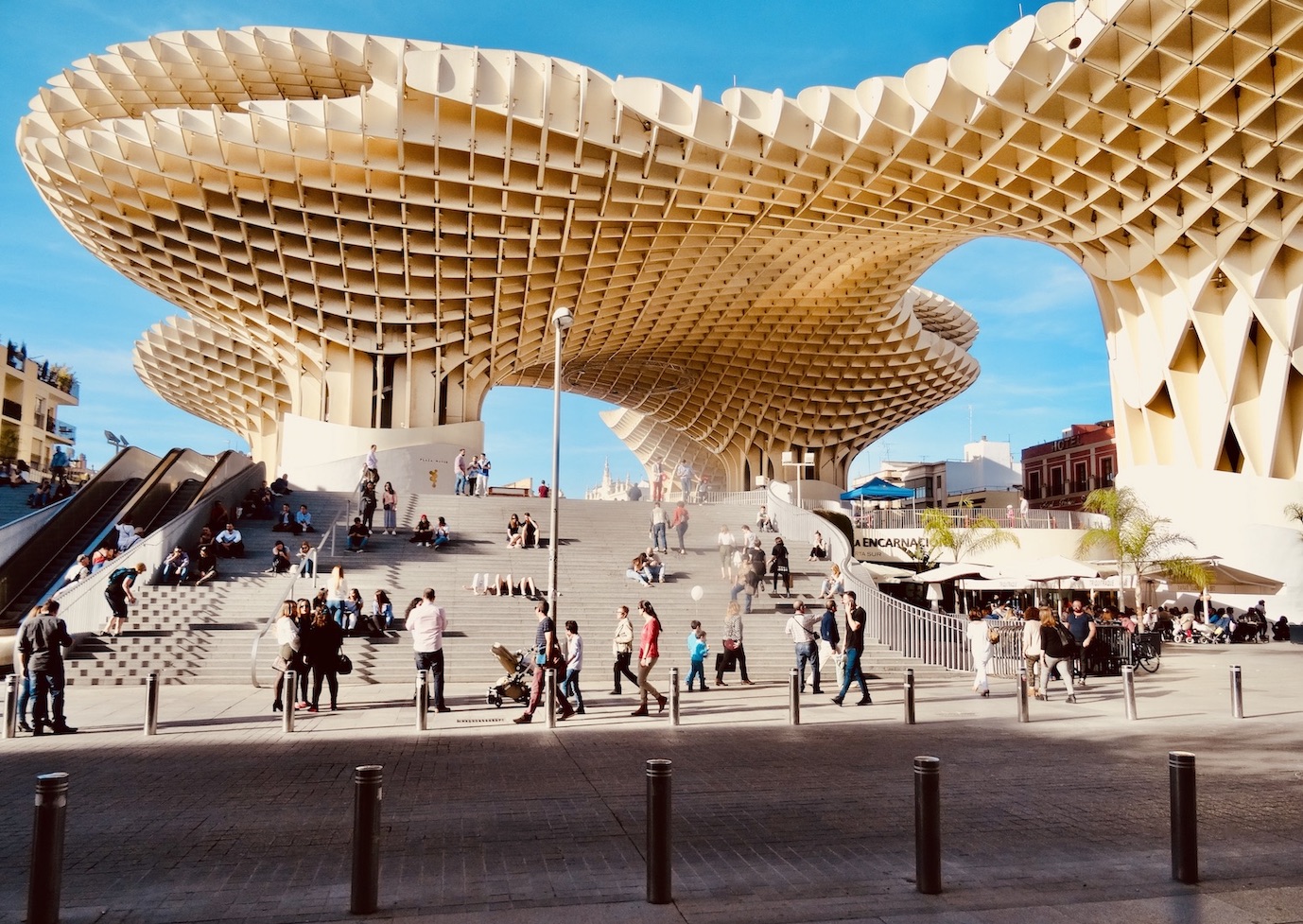 On the subject of controversial structures, I made sure not to miss the unique and bizarre Metropol Parasol. Designed by the German architect Jürgen Mayer, it stands as one of the world’s largest wooden constructions.

Built from imported Finnish birch, it is a four-level beast made up of six connected mushroom-like parasols. Supposedly inspired by the vaults of Seville Cathedral. 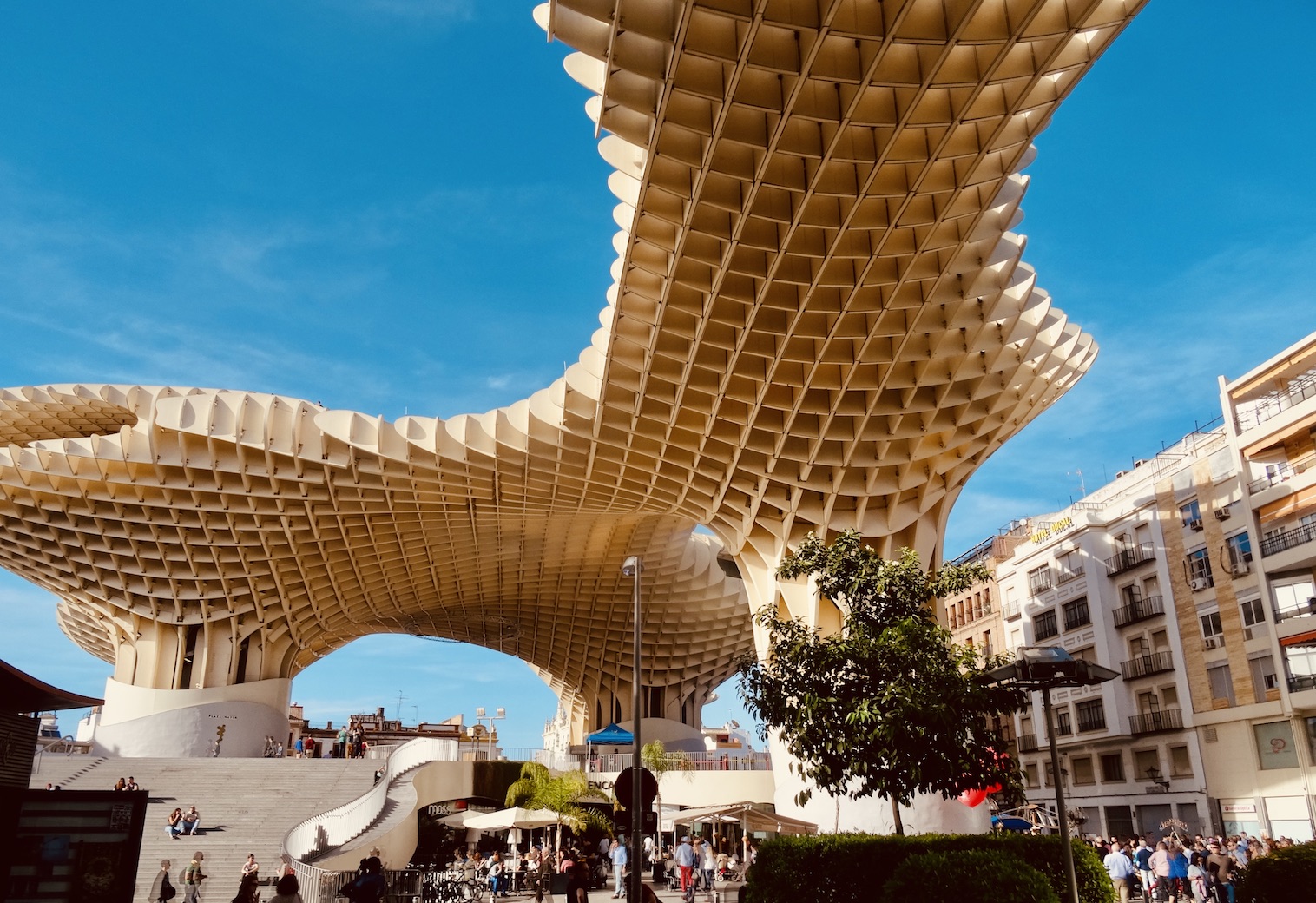 Level 1 houses a market, while Level 2 is an open air plaza where people come to hang out. Last but not least, Levels 3 and 4 serve as panoramic terraces with a restaurant. Metropol Parasol is contentious because at least 50% of surveyed locals describe the structure as “hideous”.

What’s more, there was outrage when news of the project’s €100 million price tag leaked. To add insult to injury, there were also huge delays and it didn’t open until 2011. That’s seven years after work started. While I could certainly think of a multitude of better ways to spend that kind of money, I have to admit that visually I found Metropol Parasol fascinating!

Another ugly building that has more of a place in the people’s hearts is Seville Bus Station. Many locals considered this one of the city’s most unfortunate eyesores, until street art legend El Niño (The Kid) stepped in.

His large mural shows a somewhat devilish imp watching over a sleeping child. I’d already seen some of his work during my wanderings in Granada, so it was nice to stumble upon another of his murals. 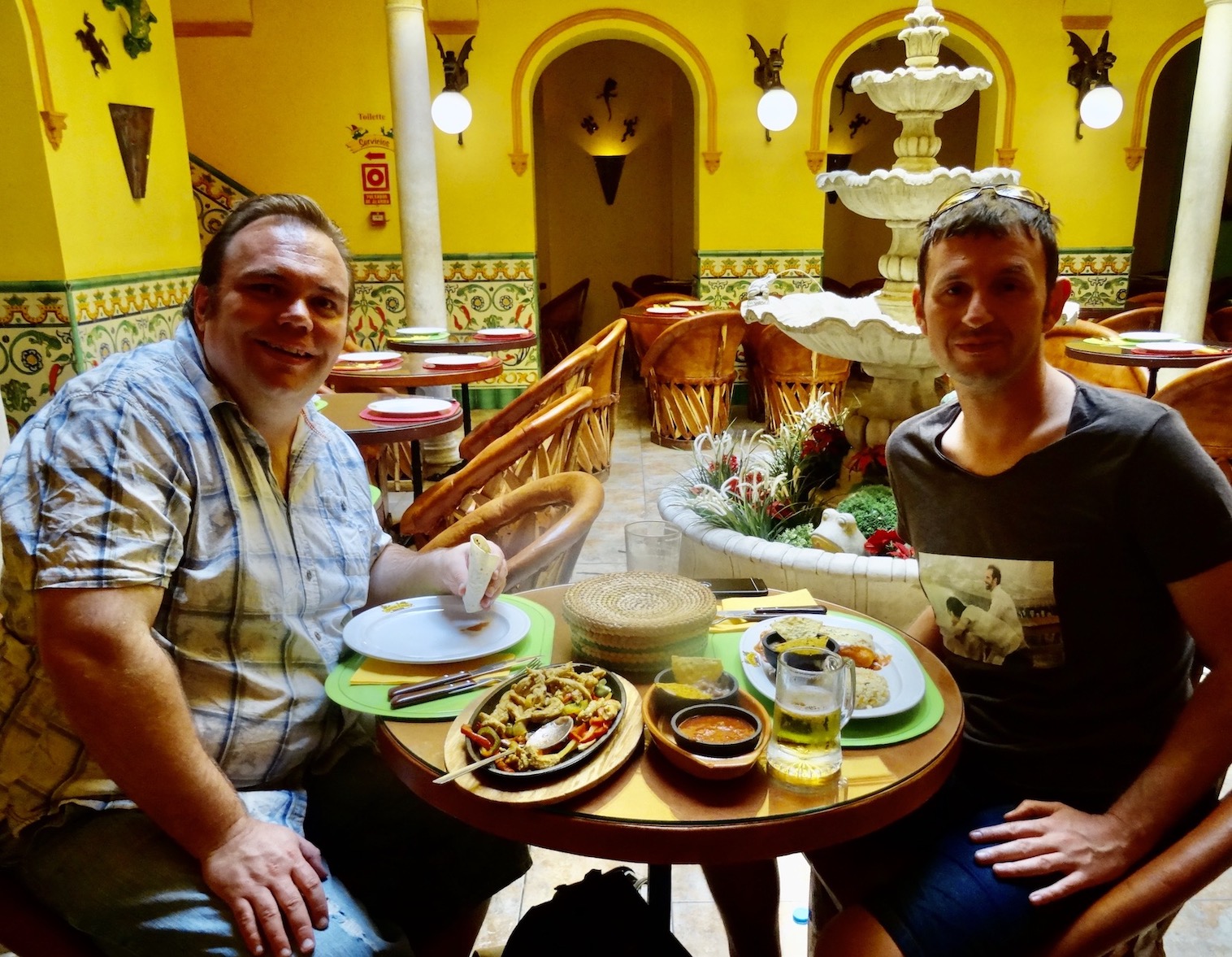 Finally, a quick word on the food. There’s never any holding back when Wonderboy’s around and indeed we had an amazing culinary time on that trip.

In addition to the usual tapas between sights and a volcanic pile of nachos at Phoenix Pub, my standout memory is of the Mexican feast we destroyed at the utterly charming Iguanas Ranas Restaurant. “Food so fresh it’ll make you blush!” came the tagline and we weren’t disappointed!