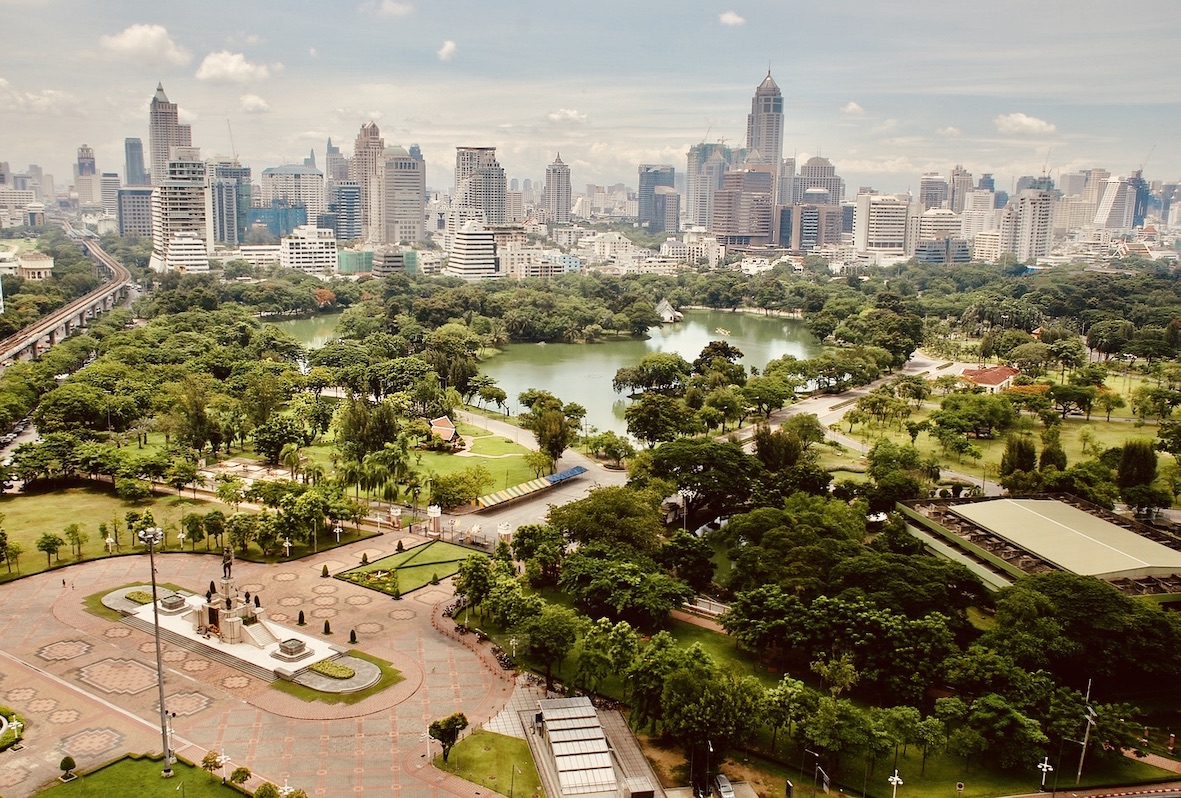 April, 2015. There’s no doubting what a colossal and often uncompromising city Bangkok can be. It’s a relentless concrete jungle for the most part, with green spaces being few and far between. But luckily for me, the Thai capital’s oldest and most charming park was within walking distance from my hostel. 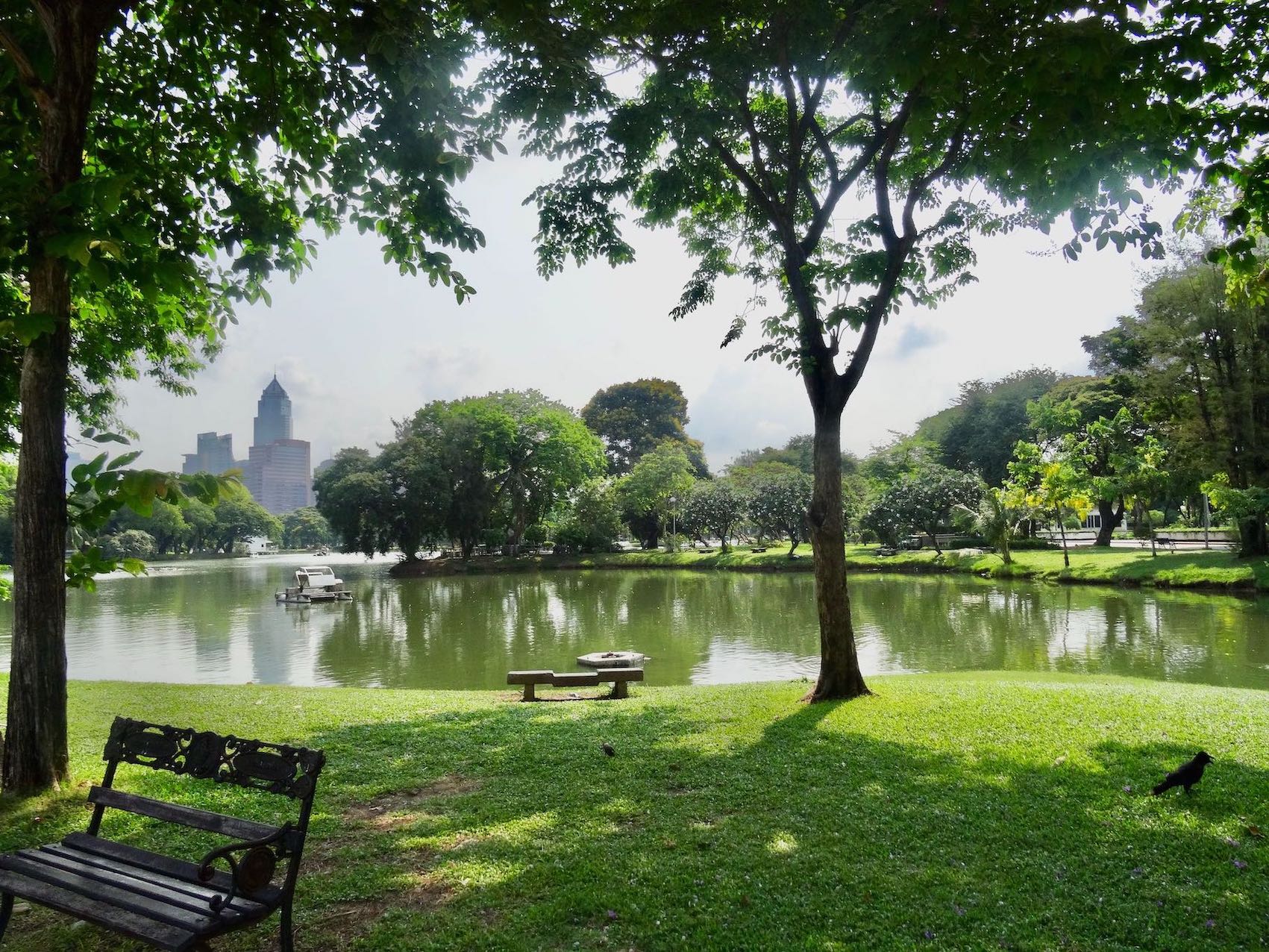 Indeed it took me a leisurely thirty minutes to walk from (the now sadly closed) Three of a Kind Hostel. Moreover, virtually the entire route was a straight shoot down the seemingly infinite Silom Road. Wherever I was heading on my daily adventures, I’d nearly always grab a coffee and head to the park for a bit. It was always the perfect start to my day before jumping on the metro at the nearby Lumphini Station.

Lumphini Park began life in the early 1900s as a private garden belonging to King Rama VI. In 1925 he donated the land to the city for use as a fairground. A few years later he announced that the area would be turned into a public park, which he named Lumphini, a reference to Lumbini, the Buddah’s birthplace in Nepal. 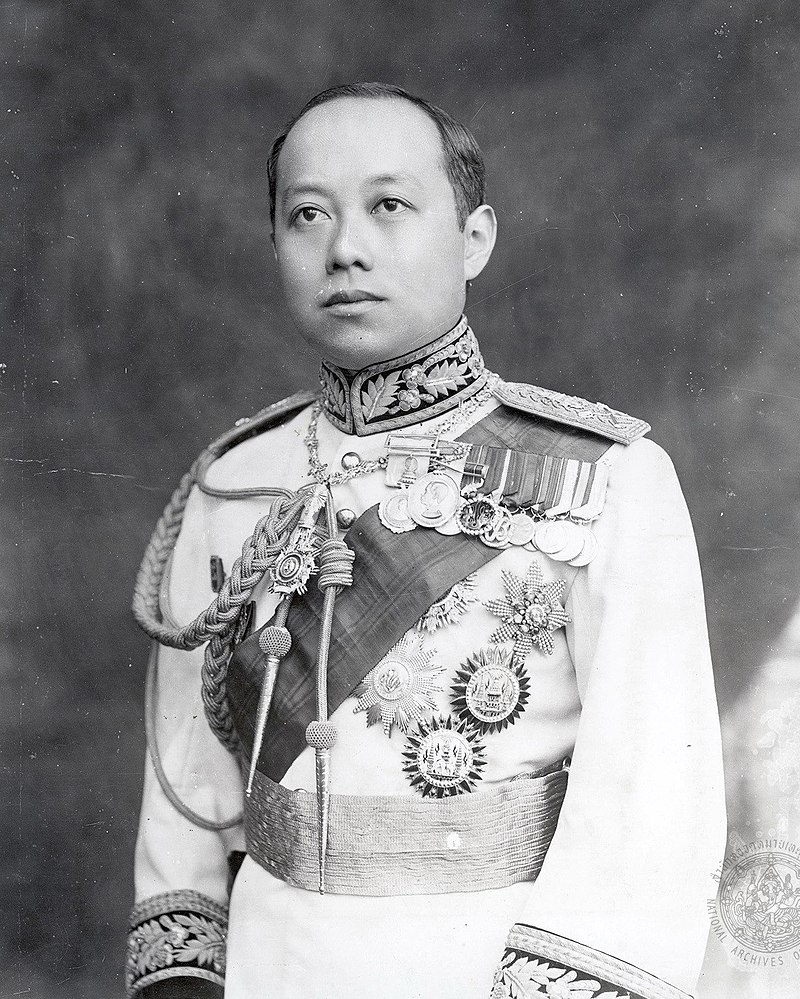 Unfortunately, the king died that same year, some time before the park’s grand opening. But his role in creating Bangkok’s first public green space has never been forgotten. Indeed a statue of the king was added to the park’s southwestern entrance in 1942. 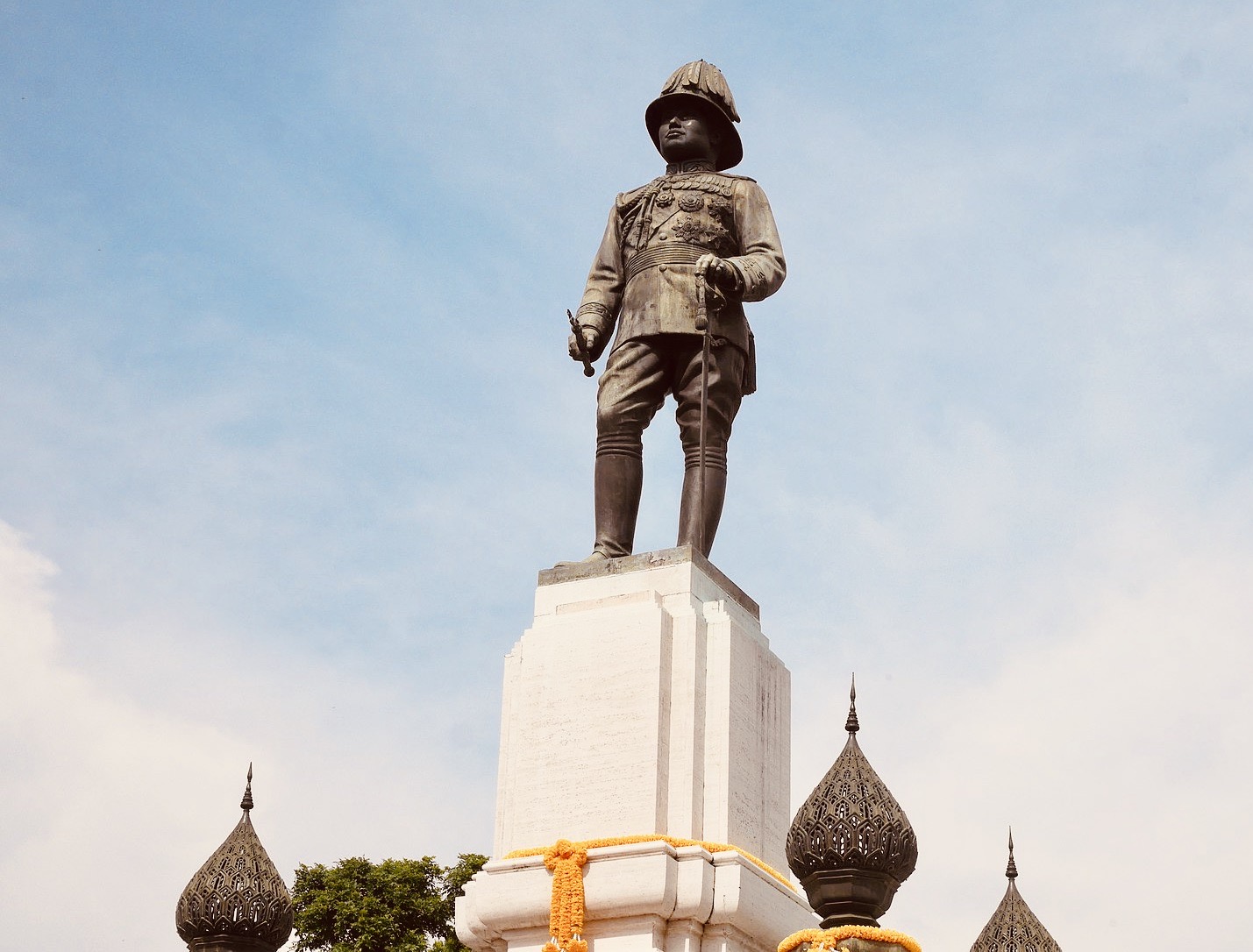 I have such fond memories of hanging out in Lumphini Park. After a year working my ass off in Beijing, I was finally free and at the beginning of a three month adventure exploring Thailand, Singapore and Malaysia. Sometimes, if I arrived early enough, I could watch the group of local seniors who came to practice Tai chi every morning. 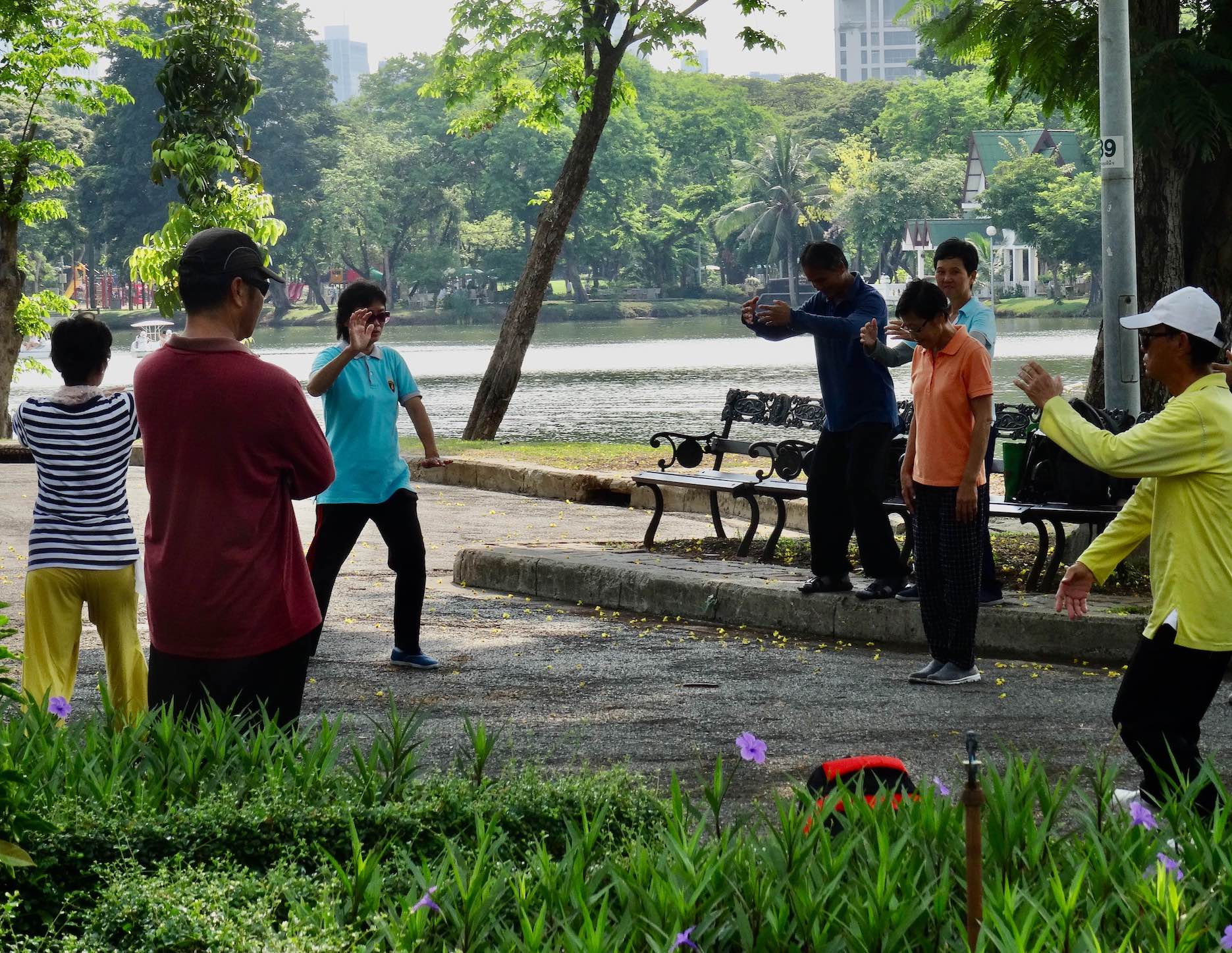 In fact, Lumphini Park is home to Bangkok Elders Club, which organises exercise, dancing and book club meets. The old folk that did Tai chi were a bit frosty towards me at first. No doubt wondering who this skinny, pasty, latte drinking foreigner was. However, on my third or fourth visit, I eventually got a few waves and an endearingly mispronounced hello from one old man. 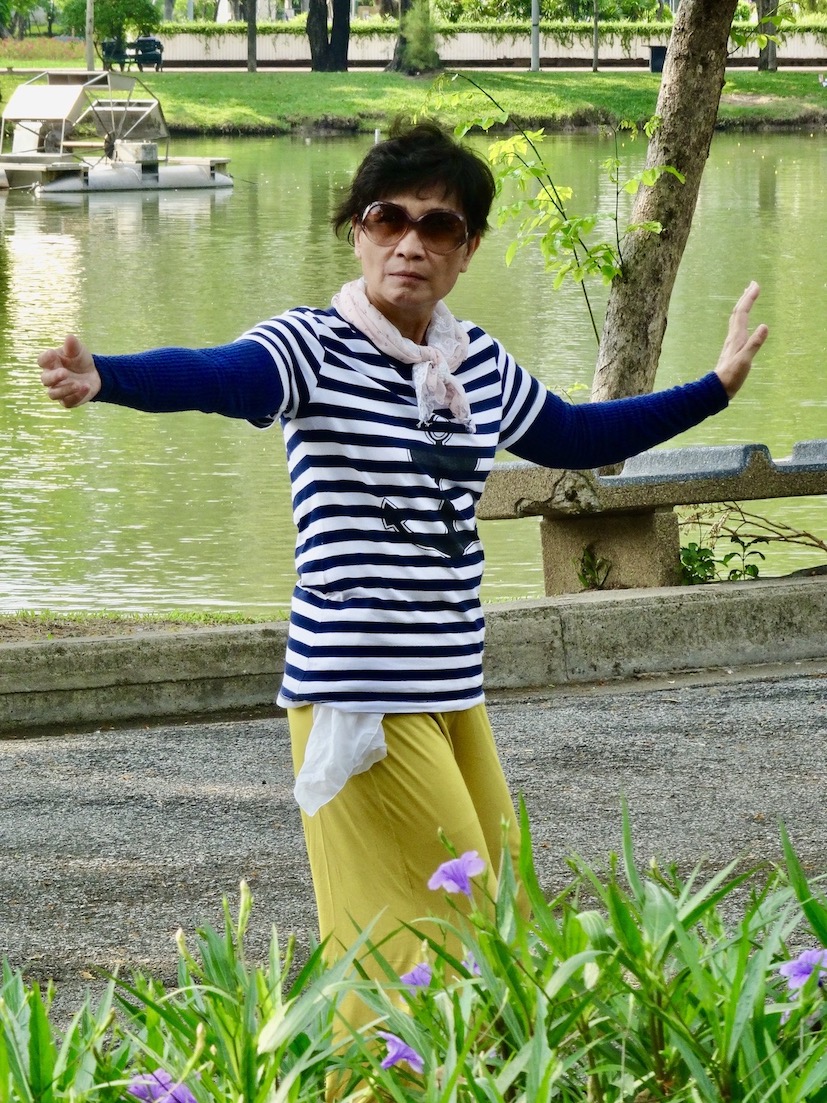 There are around two and a half kilometres of walking trails around the park, the nicest of which run around a large, artificial lake. I loved how quiet it was on weekdays, though on Saturdays and Sundays the place gets flooded. Mostly by families and couples who come to rent swan paddle boats for an afternoon on the water.

What to See and Do, Bangkok. 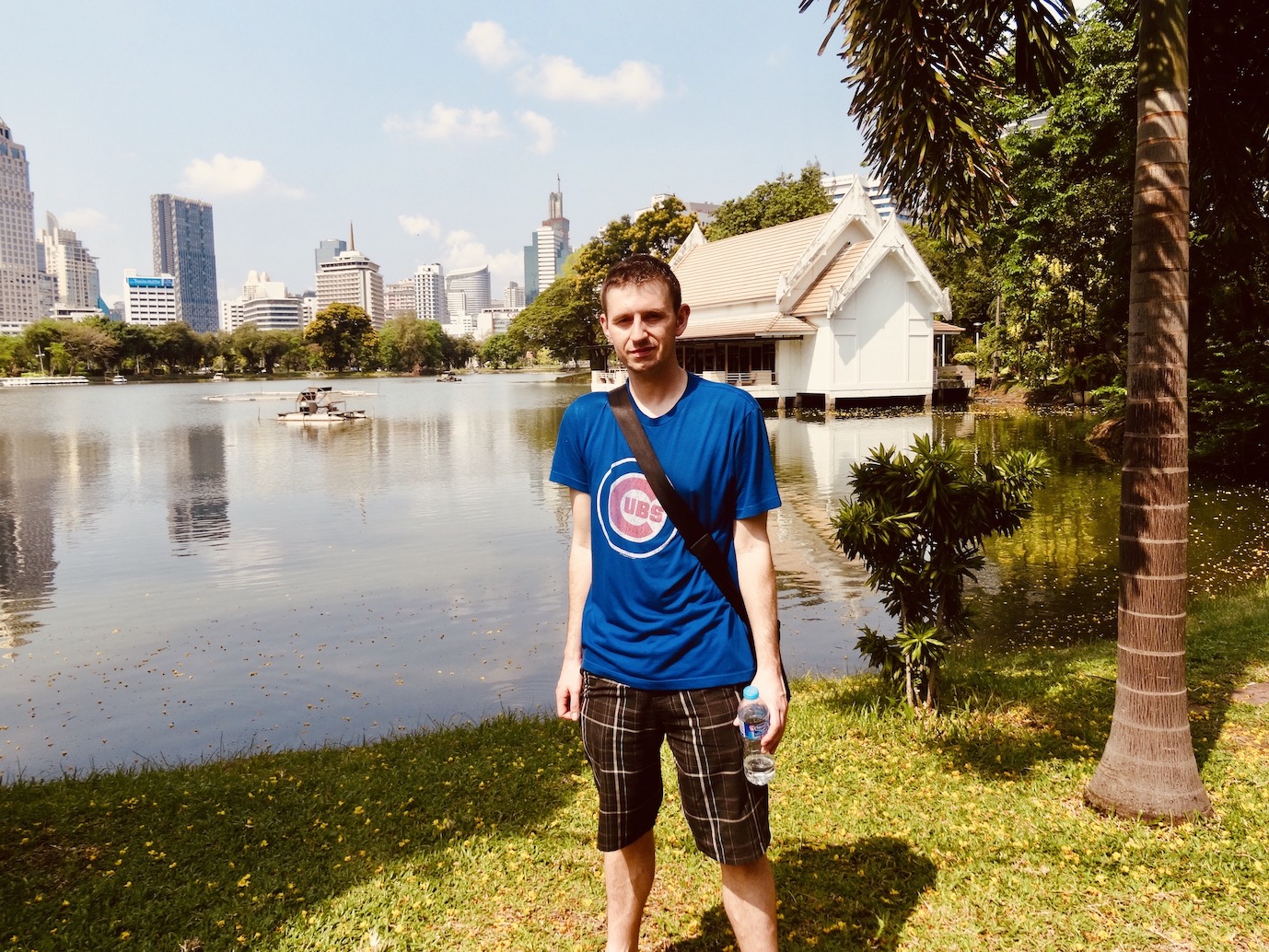 The park plays host to an excellent array of wildlife, including more than thirty species of birds. On those mornings where my coffee came accompanied by a pastry, a group of black crows would form a circle around my bench. Watching me from a safe distance with their beady eyes, it all felt just a touch Hitchcockian. 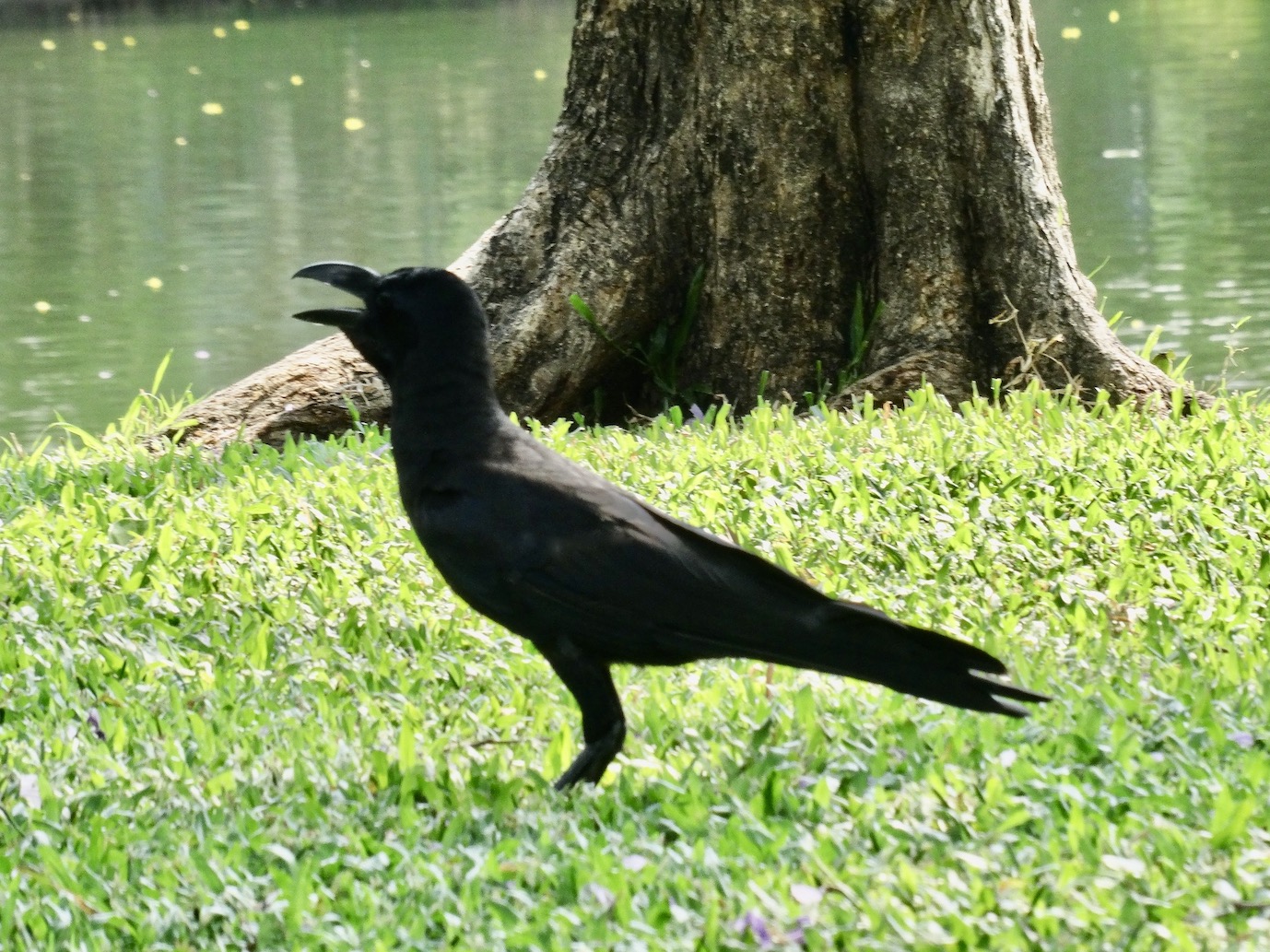 My most defining memory of Lumphini Park has to be its large, ever-present community of Monitor Lizards. I remember nearly jumping off my bench the first time one of these dudes came ambling past. For just a terrifying millisecond I thought the damn thing was a crocodile! 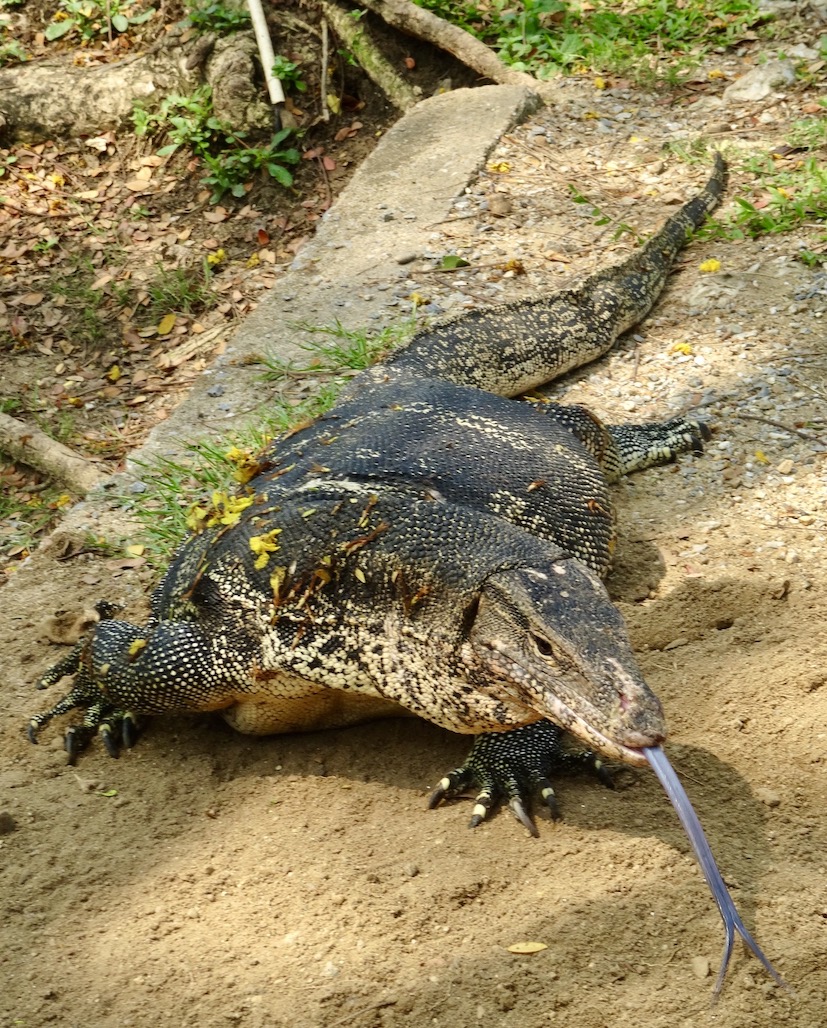 I saw dozens of monitor lizards during my visits and was surprised to learn that they’ve been living in the park for decades. Despite their fearsome looking scales, claws and forked tongues, monitor lizards are mostly docile creatures who feast on dead fish, turtles and birds.

Not that Thai people take such a laid back view. Interestingly, Bangkok’s locals see them as little more than ugly pests, while for many they’re also a symbol of bad luck. Furthermore, the Thai name for monitor lizard (hia) equates to one of the worst swear words and insults in the language! 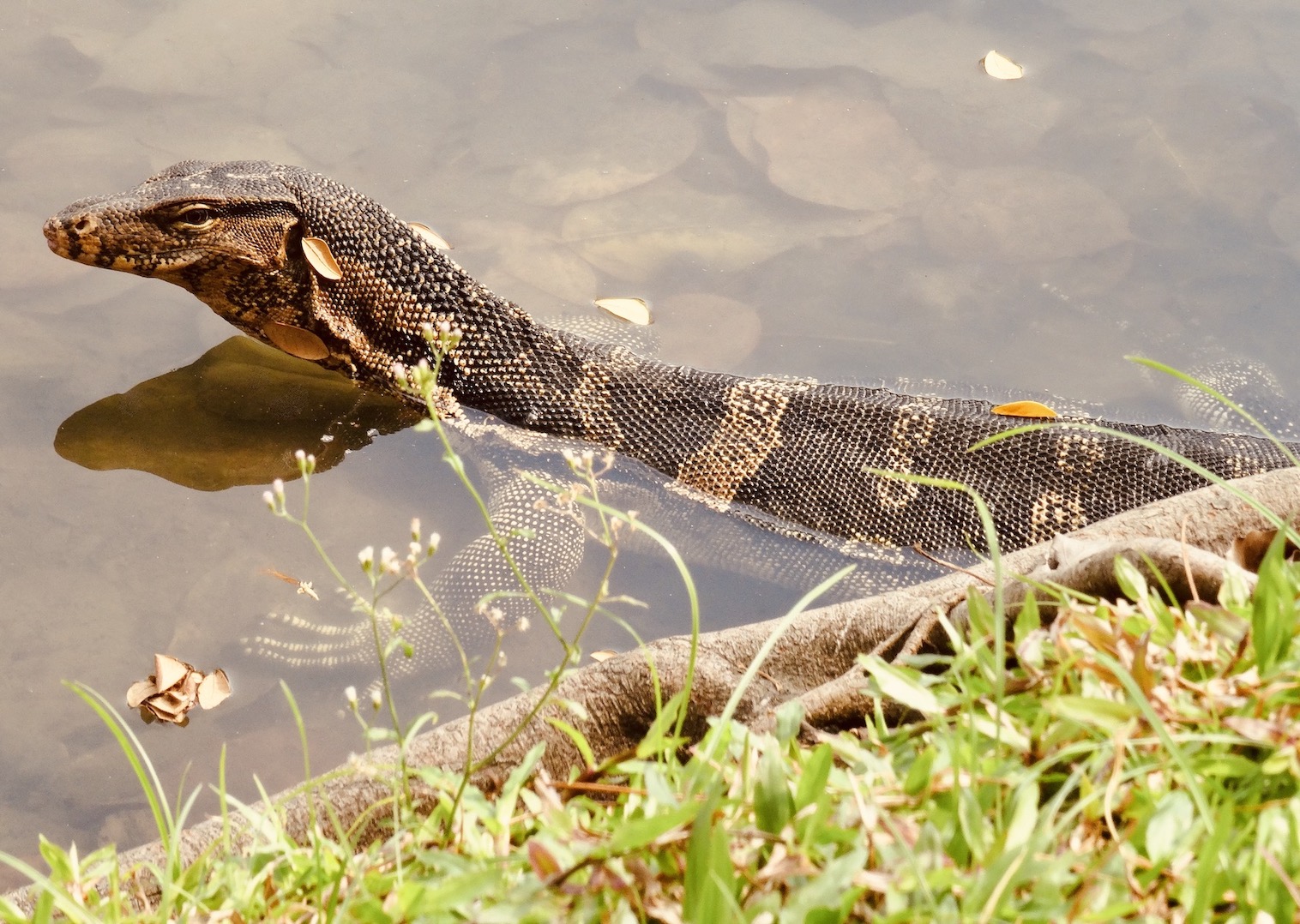 As a result, it’s perhaps no surprise that local authorities removed most of Lumphini’s monitor lizards in 2016. According to various articles, their numbers had begun to grow out of control. They were also accused of destroying plants and flowers, in addition to scaring people. In the end around one hundred found themselves carted off to a wildlife sanctuary outside the city. 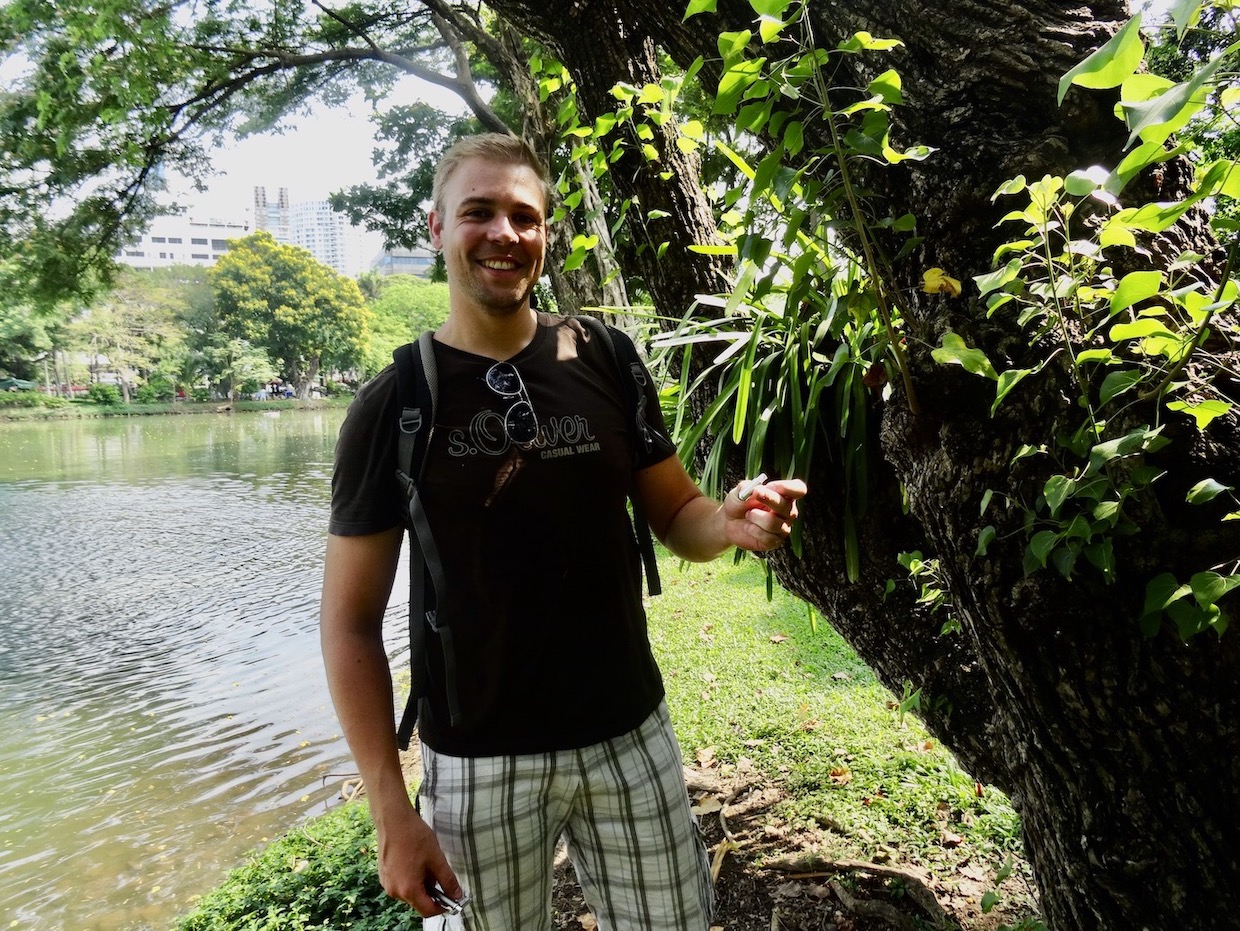 One day I was resting in the park on my way back to the hostel after a wonderful afternoon at the fascinating Jim Thompson House. Suddenly, I caught sight of a determined looking man poking around in a nearby tree. He seemed to be urgently searching for something, eyebrows knitted, lips pursed.

“Hey, what’s up?” I called. “Anything I can help you with?” “Oh hey!” he replied, his face transforming into one large friendly grin. “Just geocaching” he explained, before returning his gaze back into the branches. “I know it’s in here somewhere”.

I had never heard of geocaching. And yet, as Frederik from Frankfurt explained, it’s actually the world’s largest treasure hunt, with over three million participants worldwide. Basically, the hunt has people using their GPS to both hide and seek little items and messages concealed in inventive locations. Some of these bits and bobs are part of extended quests and official competitions.

The items are known as caches. Frederik’s cache that day was a handwritten anime riddle with a clue leading to another cache somewhere in the district. He seemed delighted with his find and, having exchanged a few travel stories with me, off he went with a spring in his step to uncover his next bounty. 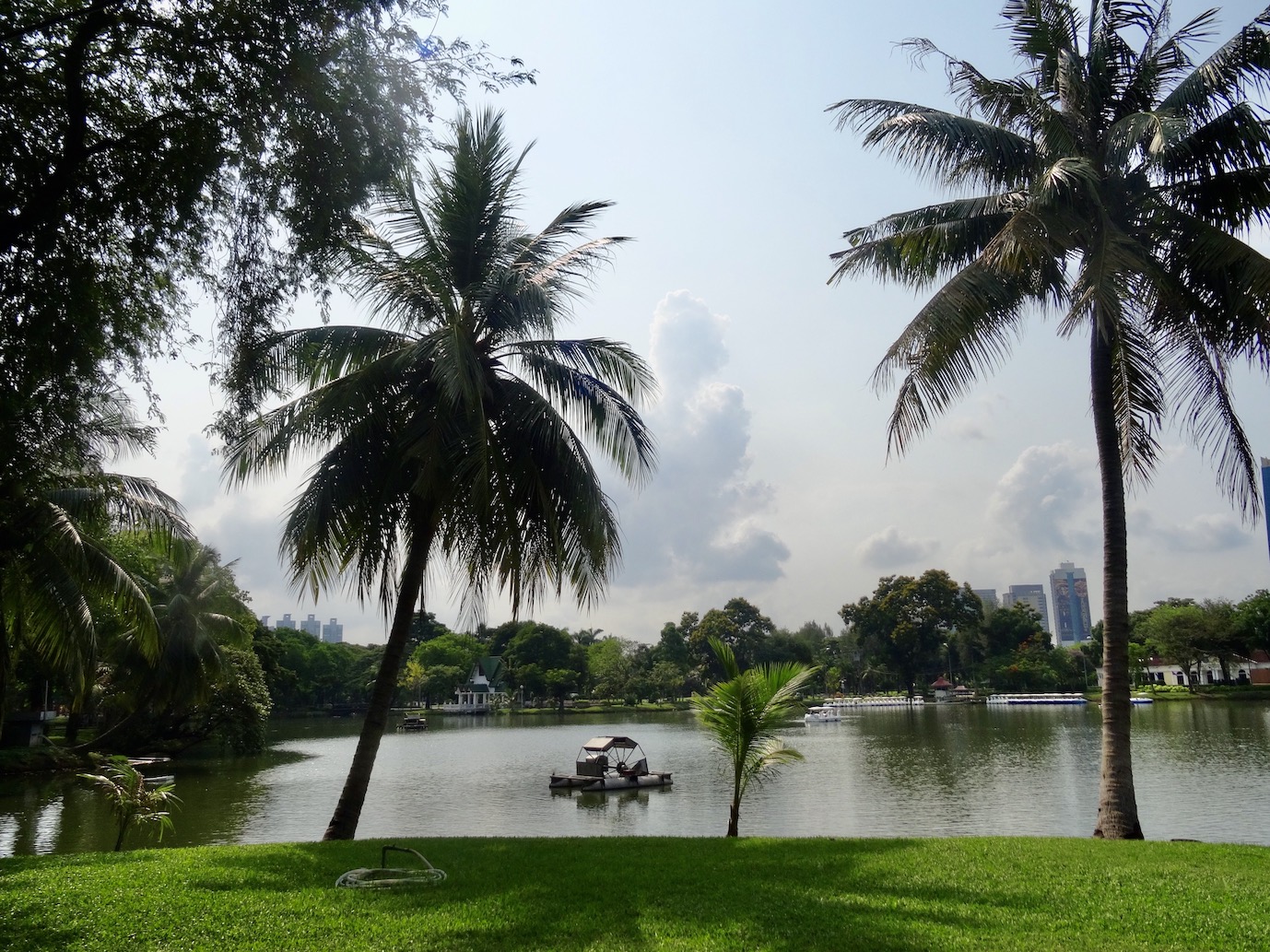 Lumphini Park is an essential spot while in the Thai capital, and one that provides a much needed breather from the city’s many demands. On top of everything I’ve already covered, you can also find Smiling Sun Ground, a support hub for the disabled, as well as a refuge for homeless children called Home of Hope. Last but not least, don’t miss Lumphini Library, Bangkok’s very first public book centre. 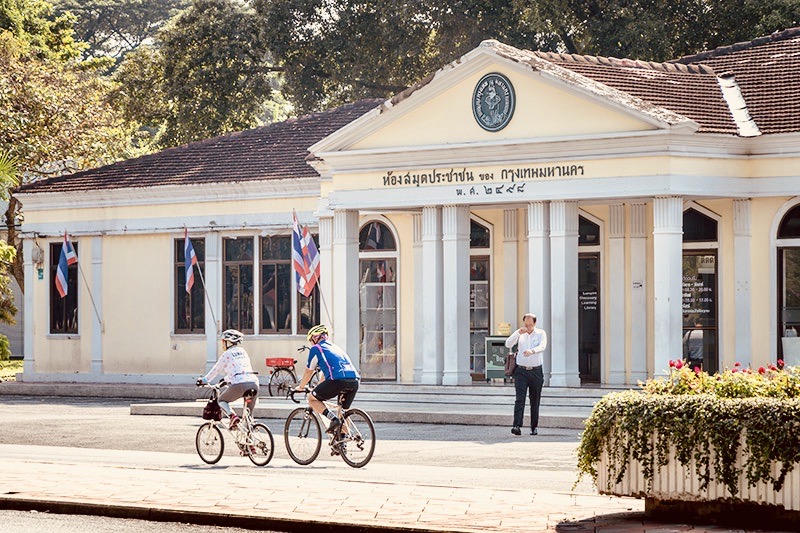