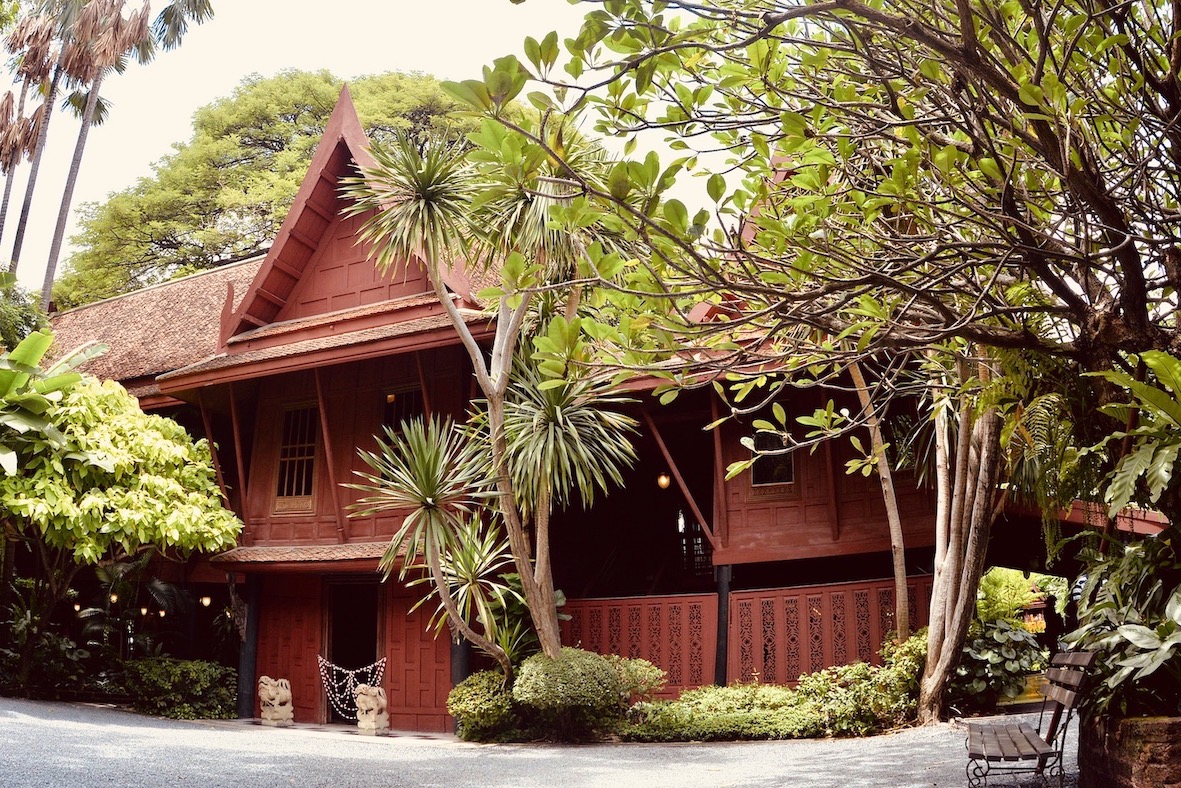 I do hope, at the very least, that my series on Bangkok changes a few minds about the Thai capital. Time and time again I hear the same thing from travellers. That there’s “nothing to see” and that it’s “not the real Thailand!”

I find this especially irksome because a) it’s complete rubbish and b) this highly authentic “real Thailand” people talk about usually involves getting stoned on some island beach. Each to their own I suppose.

Hopefully, by the end of the series, I will have put forward nine solid reasons to include the Thai capital in any cross-country trip around The Land of Smiles. Of these spots, I particularly loved Bangkok’s beautiful and fascinating museum on the life and times of a man called Jim Thompson. 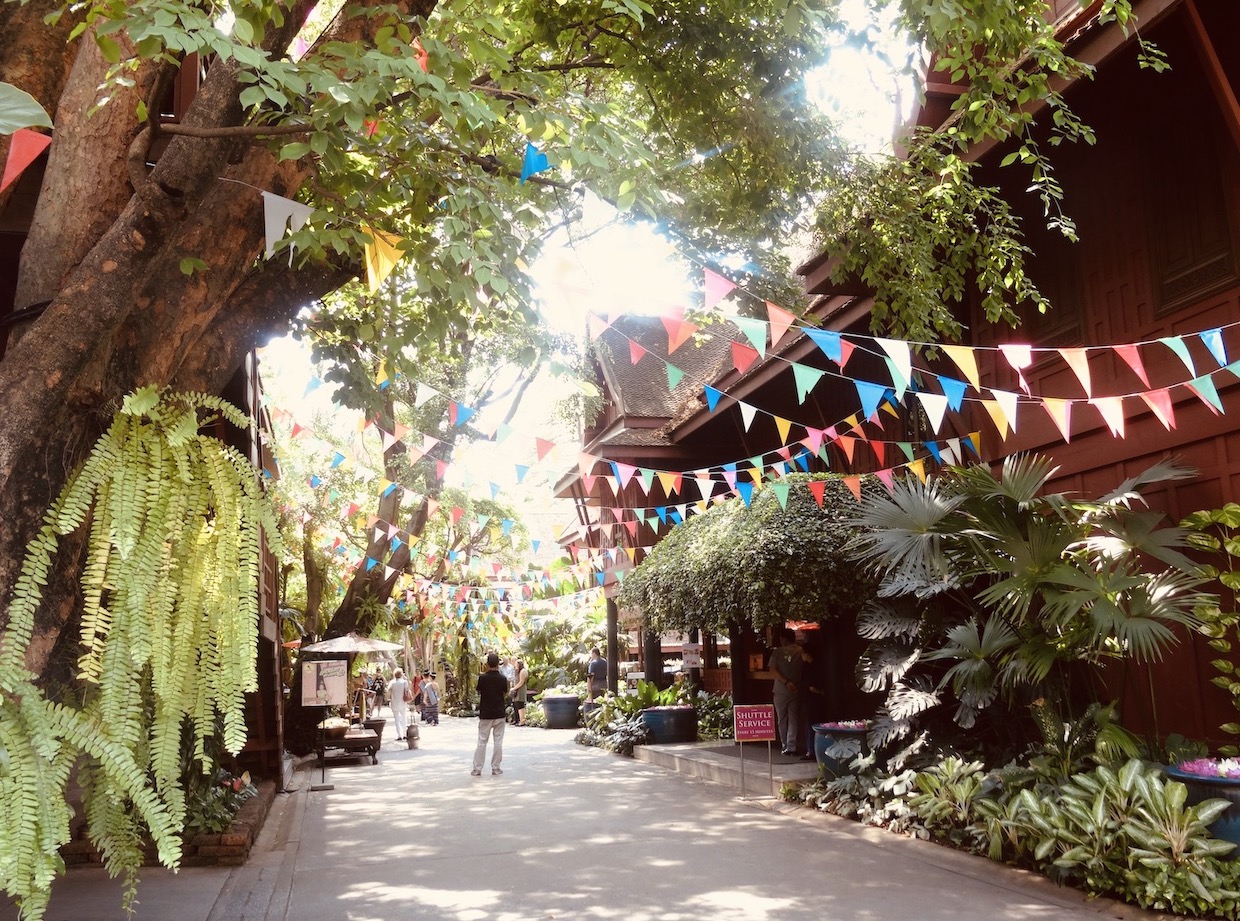 Prior to arriving at the house, I knew only the basics about Jim Thompson. Chiefly that he was a hugely successful American businessman who, in the words of Time Magazine, “almost singlehandedly saved Thailand’s silk industry from extinction”.

Indeed one of the first things you’ll see when you enter the compound is a pair of local women weaving in the main courtyard. “Welcome to Jim Thompson House!” sang one of the ladies with a pristine smile. 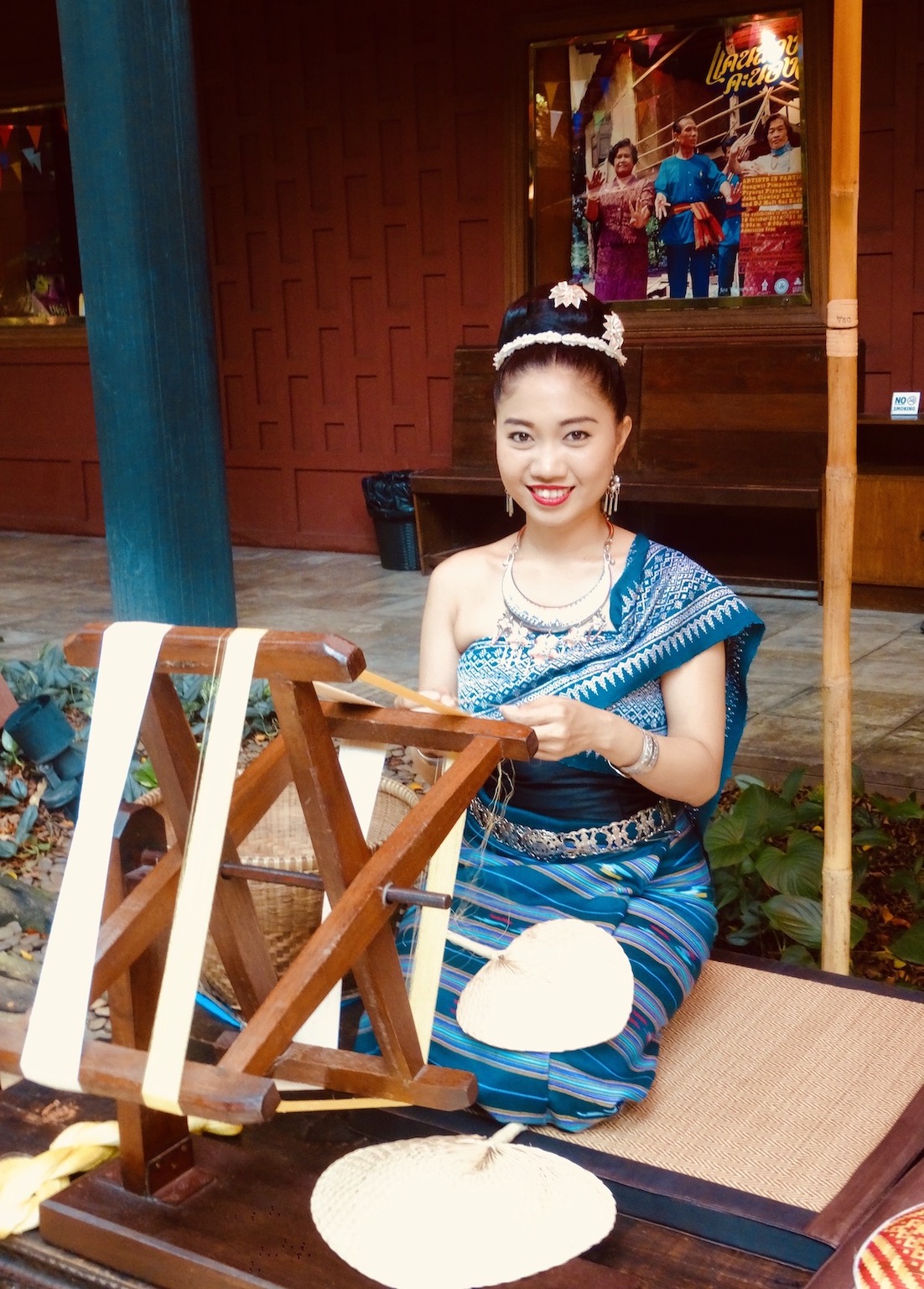 Fascinatingly, the museum tells Jim’s story within the actual residential compound he called home in Bangkok. Yup, this is the traditional wooden Thai house Thompson had custom made in 1959. And where he lived, on and off, until his mysterious disappearance in 1967. 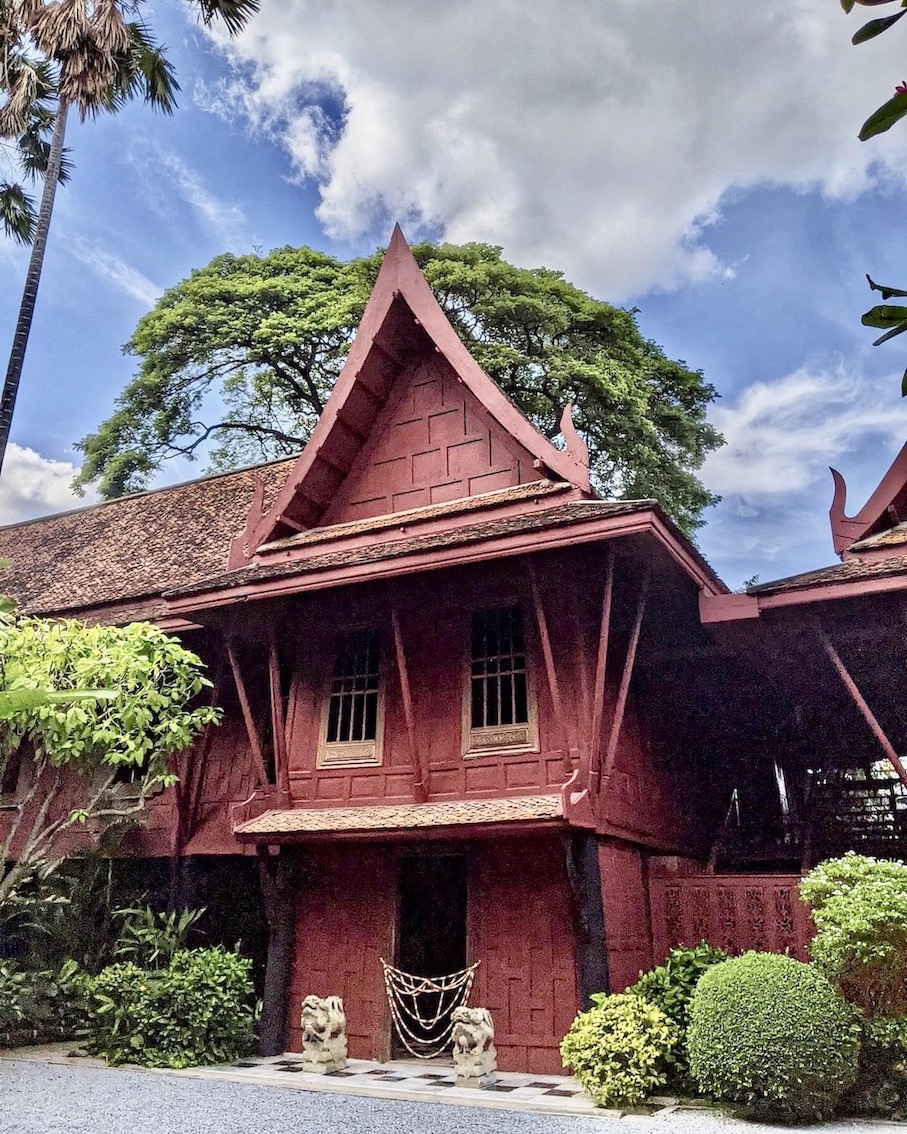 To visit the Jim Thompson House you have to take a guided tour. The interior is, they say, largely as he left it before he disappeared off the face of the Earth. It’s also stuffed with the antiques and rare Asian art he passionately collected throughout his life. Hence they don’t want people poking around unsupervised. Moreover, they aren’t keen on photography while touring the interior. 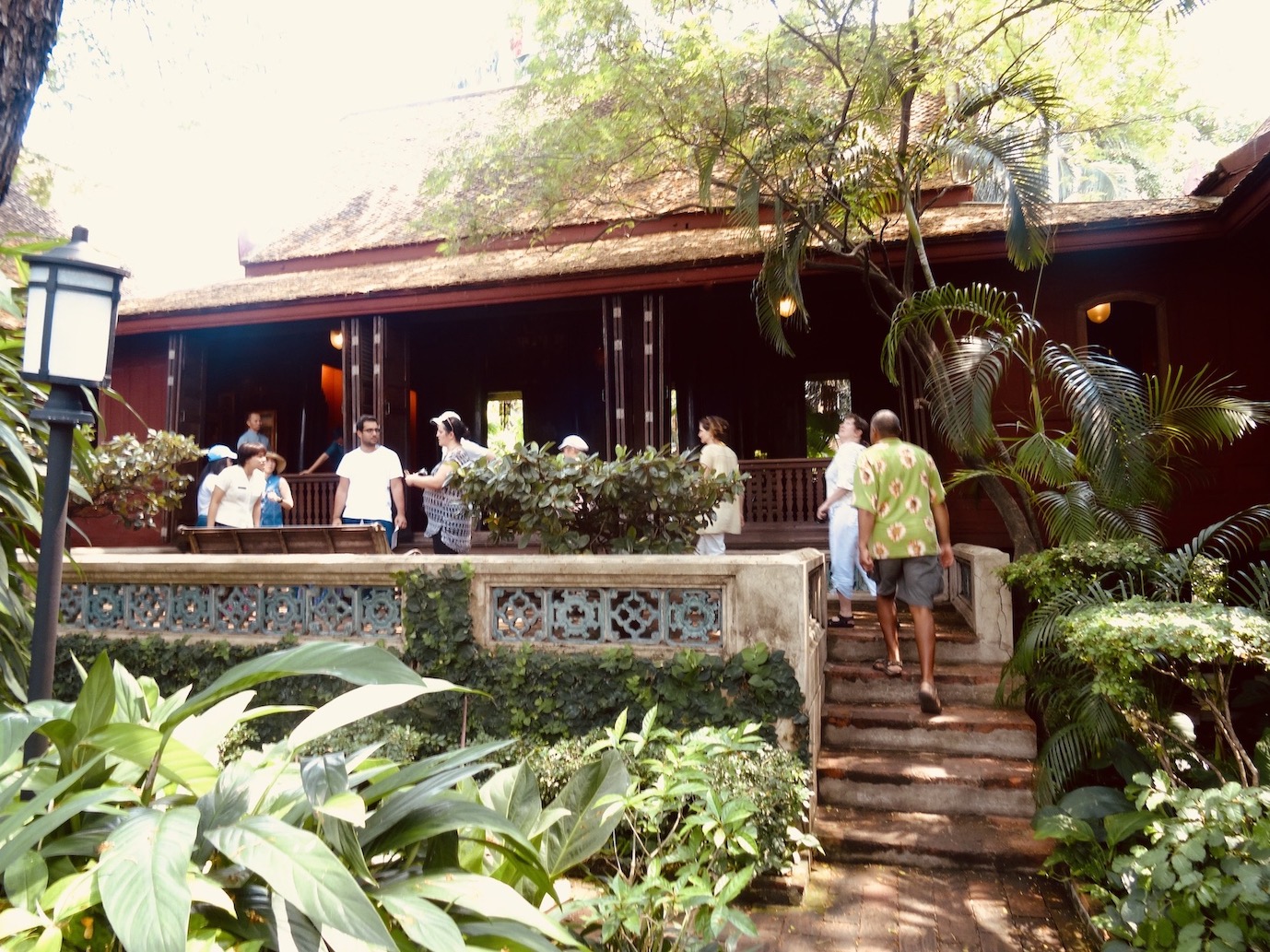 Out in the compound our guide gave us a potted history of Jim’s amazing life. Born in Greenville Delaware in 1906, he graduated from Princeton in 1928 before representing the United States in the 6-metre Sailing Event at that year’s Summer Olympics. He later studied architecture in Pennsylvania, though never completed his degree.

Nevertheless, by the 1930s he was working in New York designing fancy East Coast homes for the renowned company Holden, McLaughlin & Associates. Come 1940 Jim had grown weary of the job, thus he chose to turn his back on a promising career to join the Delaware National Guard. This soon led to an undercover position with the Office of Strategic Services, an institution that eventually became The CIA. 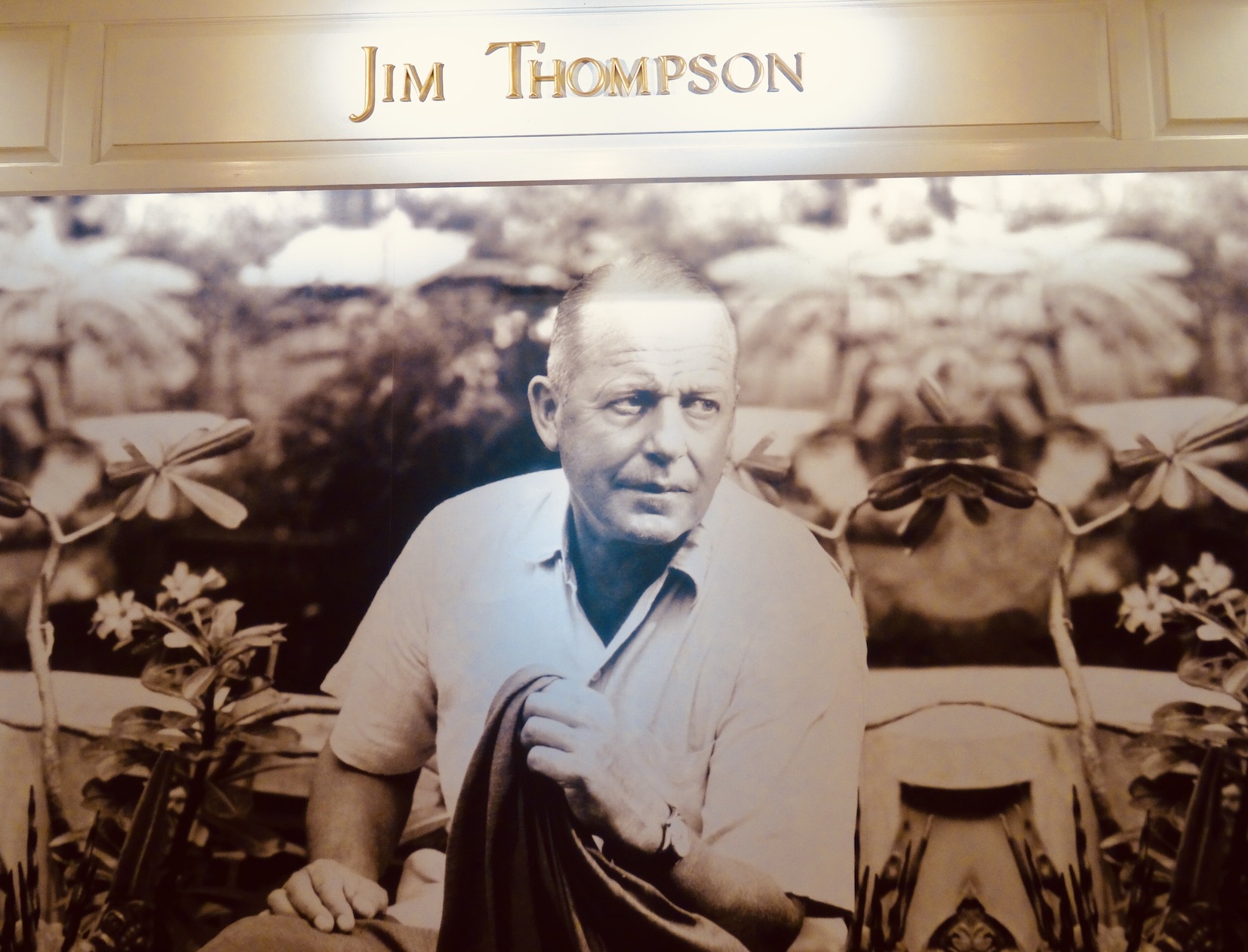 During the Second World War, Jim worked on numerous intelligence projects around North Africa, Sri Lanka and, at the war’s end, Thailand. According to friends and family, he instantly fell for Bangkok’s rough charms. As a result, following his discharge from the military, he returned to the Thai capital in 1948 to form The Thai Silk Company.

“Silk in itself possesses a great deal of glamour.

It has an aura of exotic mystery and richness about it” – Jim Thompson. 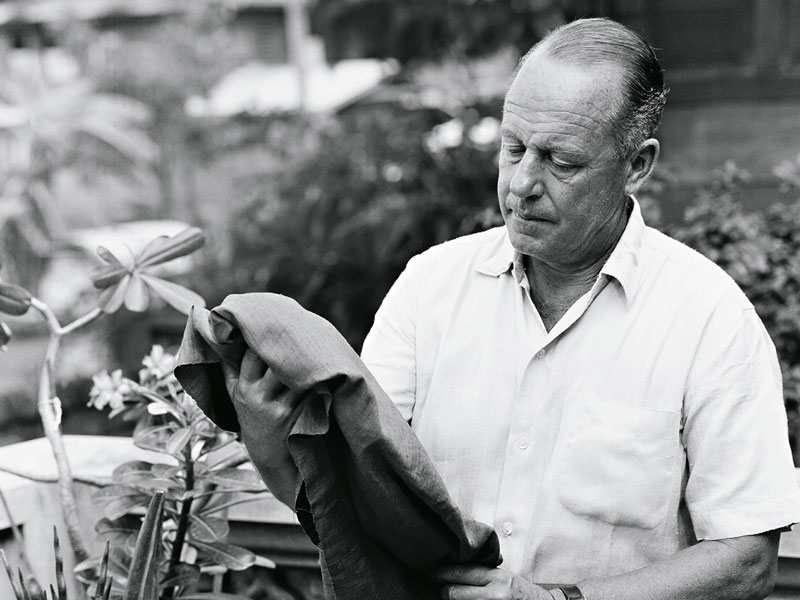 From humble beginnings the business rapidly grew, leading to a huge coup in 1951. This was when Hollywood designer Irene Sharaff employed Jim’s silk for the costumes of the hit movie The King and I. Sharaff subsequently won an Academy Award and people started calling Jim the “The Silk King of Thailand”. 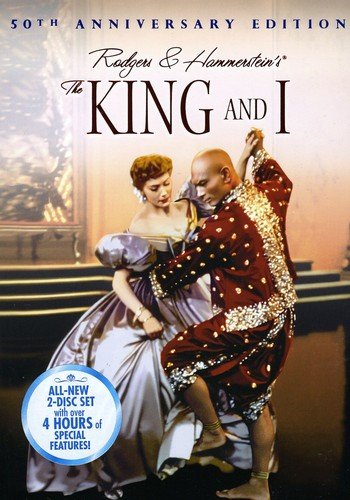 A game changer for Jim Thompson.

When Jim found fame and fortune he quickly set about designing his dream home. Impressively, he managed to source six nineteenth century wooden buildings from around the country, which he then transported to Bangkok. 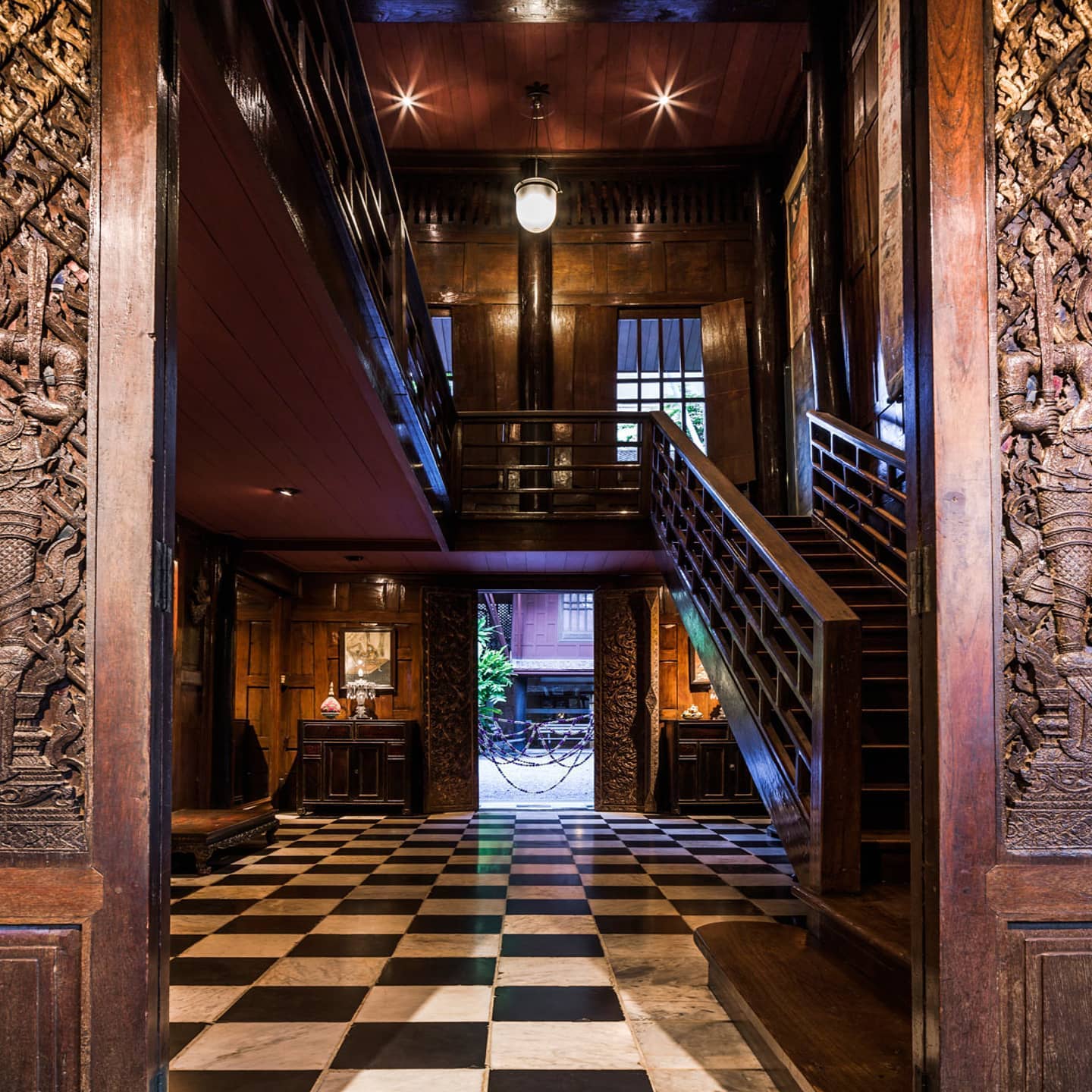 Inside the Jim Thompson House.

The main building, elevated a full floor above ground level as a safeguard against flooding, features several grand staircases designed by Thompson himself. Bits and pieces of his beloved art are everywhere. There’s 16th century Chinese porcelain, for   example, in the hallways. Along with a number of antique Thai paintings and carvings depicting the life of Buddha. 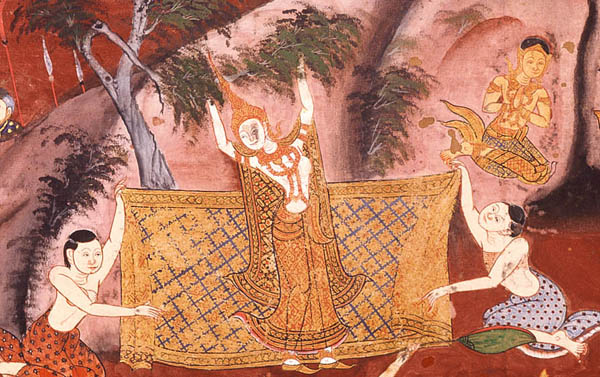 In the master bedroom, which the guide insists has barely changed since the last night Jim slept in it, I was able to grab a cheeky photograph. It’s a small but exceptionally tasteful space with an adjoining enclosed balcony that catches the sun in the morning. 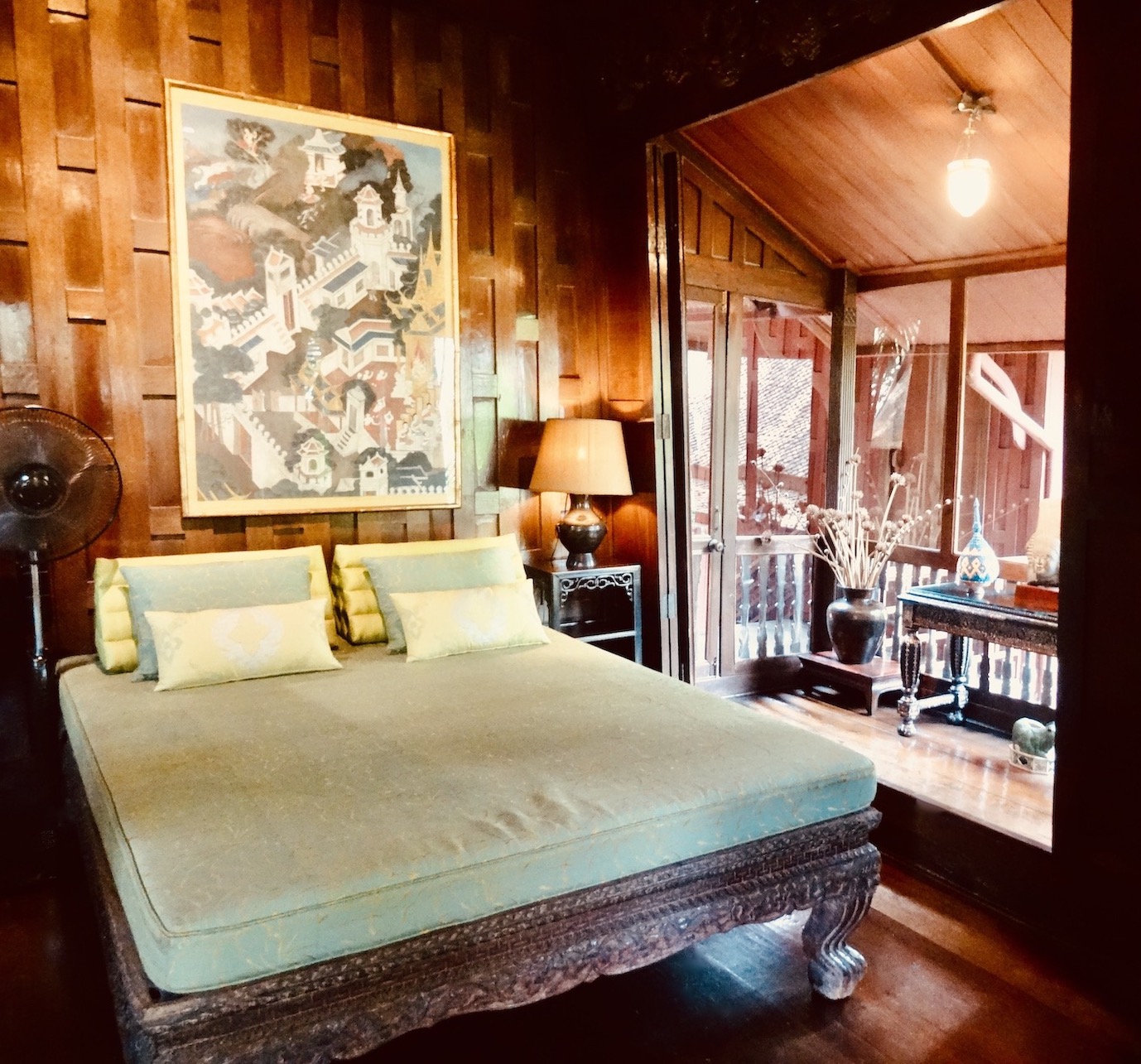 Some weeks after my visit, I was sifting through the museum’s official Facebook page when I came upon a photograph of Jim sat on his bed. I’ve always found it a somewhat haunting shot, as I invariably wonder what on earth happened to this talented, well-liked man who seemingly had everything. 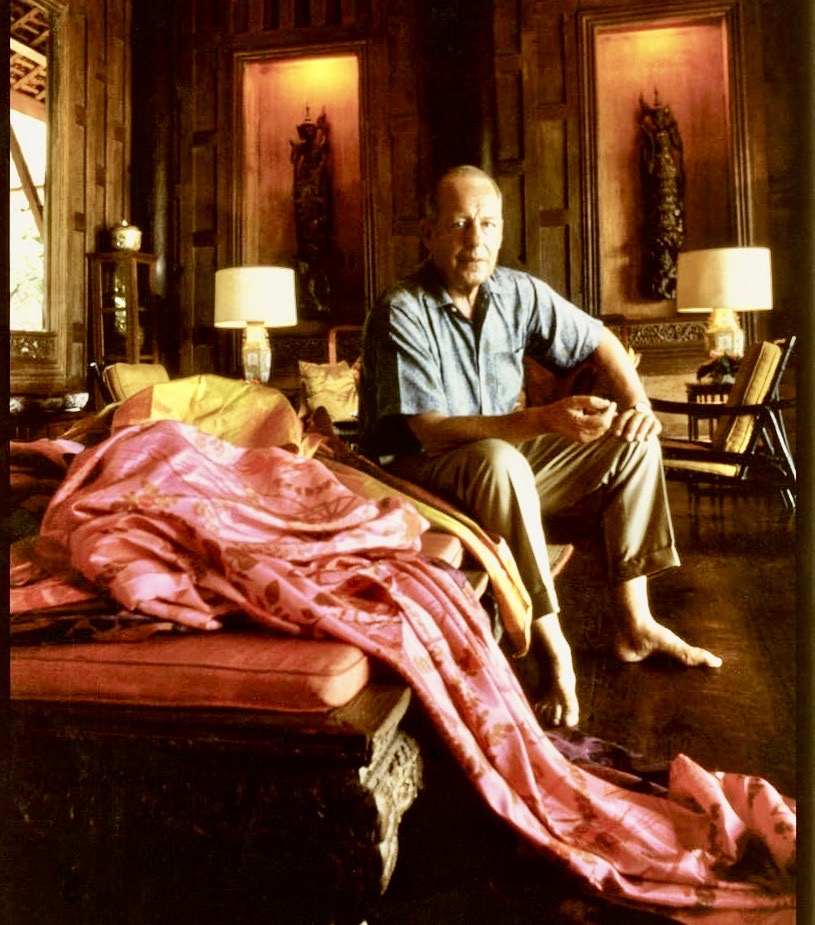 Happily, I was able to explore the gorgeous garden area alone, away from the tour group. You can see the love and care that has gone into it, with plants, flowers and antique sculptures set between the various ponds, fountains and walkways. 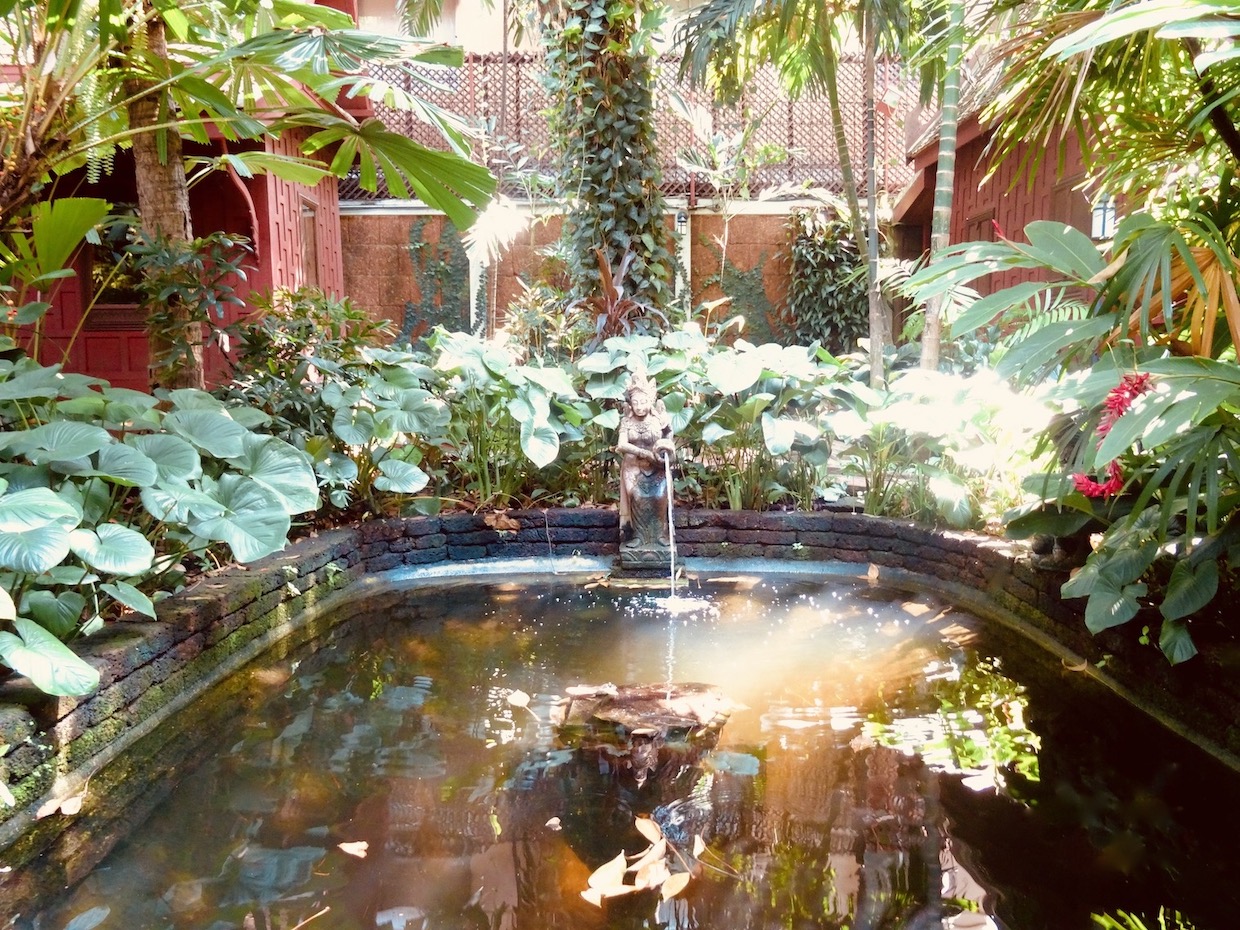 Towards the back of the compound, I found myself quite alone, almost swallowed up by the towering palm and banana trees. Even the ever-present background noise of faintly buzzing traffic had died out. 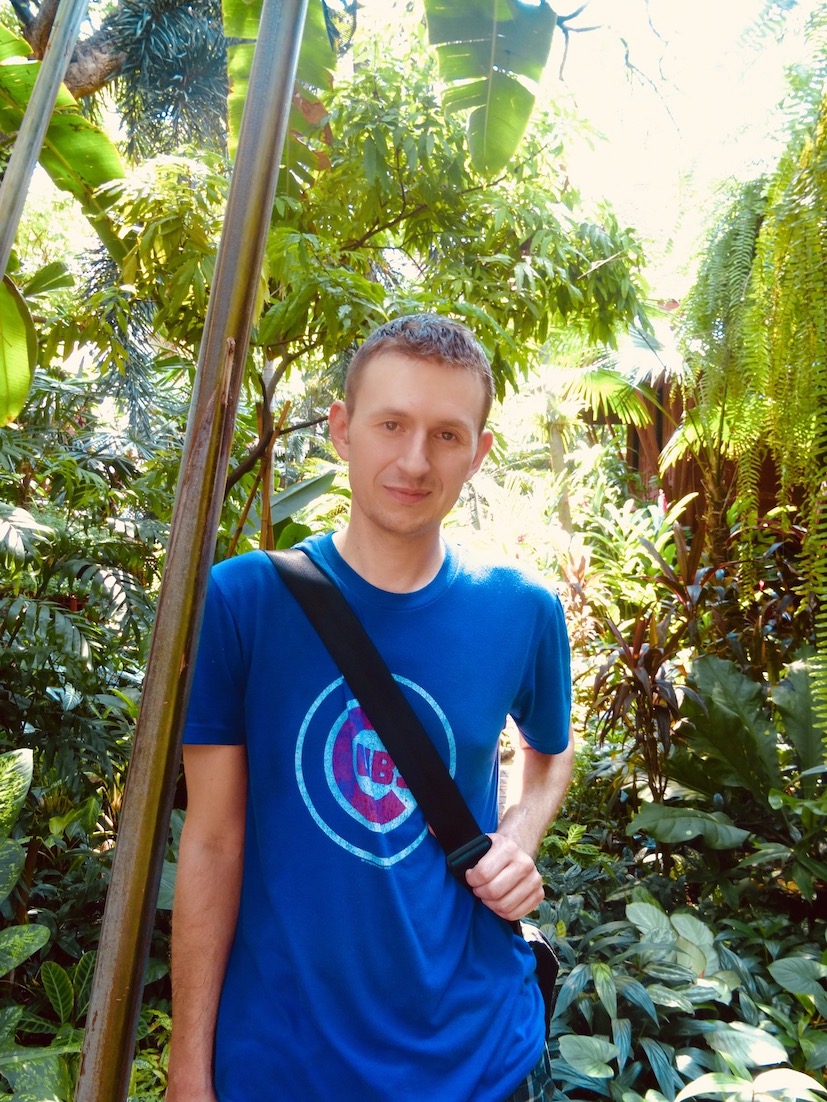 It was also cool to see the museum’s little Spirit House, which is a replica of the main building. Most Thais are really superstitious about ghosts and spirits living in houses. This little roofed structure serves as a shrine to any protective spirits attached to the buildings. I guess that means Jim. 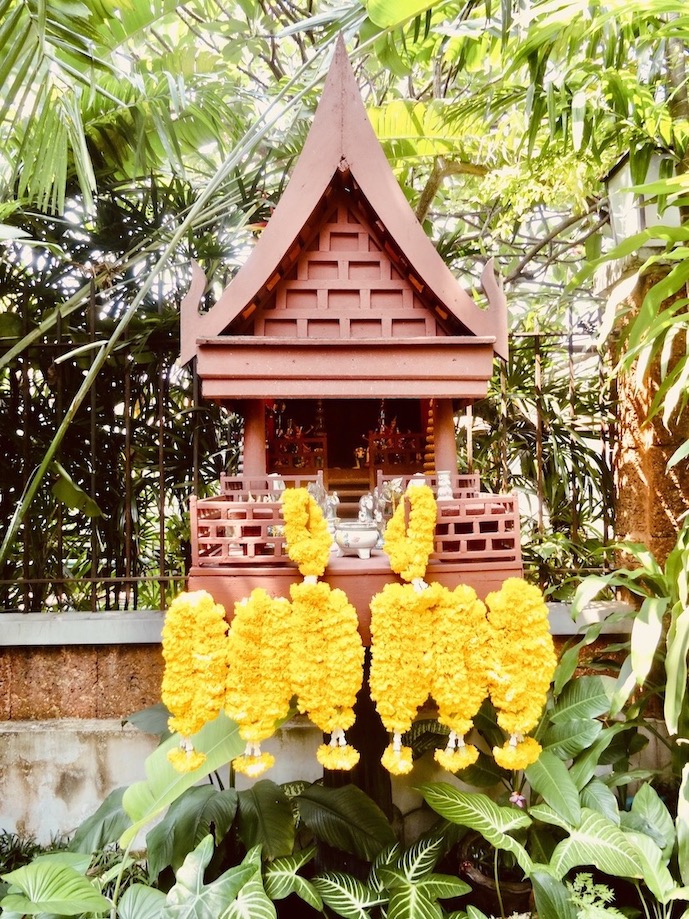 Jim Thompson disappeared while on holiday in Malaysia’s Cameron Islands on Sunday the 26th of March 1967. He had gone for a walk and… quite simply… never returned. When it became clear he was missing, a huge search effort began involving the Malaysian Police, tourists, reward hunters, students and a pair of British servicemen. Nobody found a shred of evidence as to the 61 year old’s whereabouts. Eleven days later the search was abandoned. 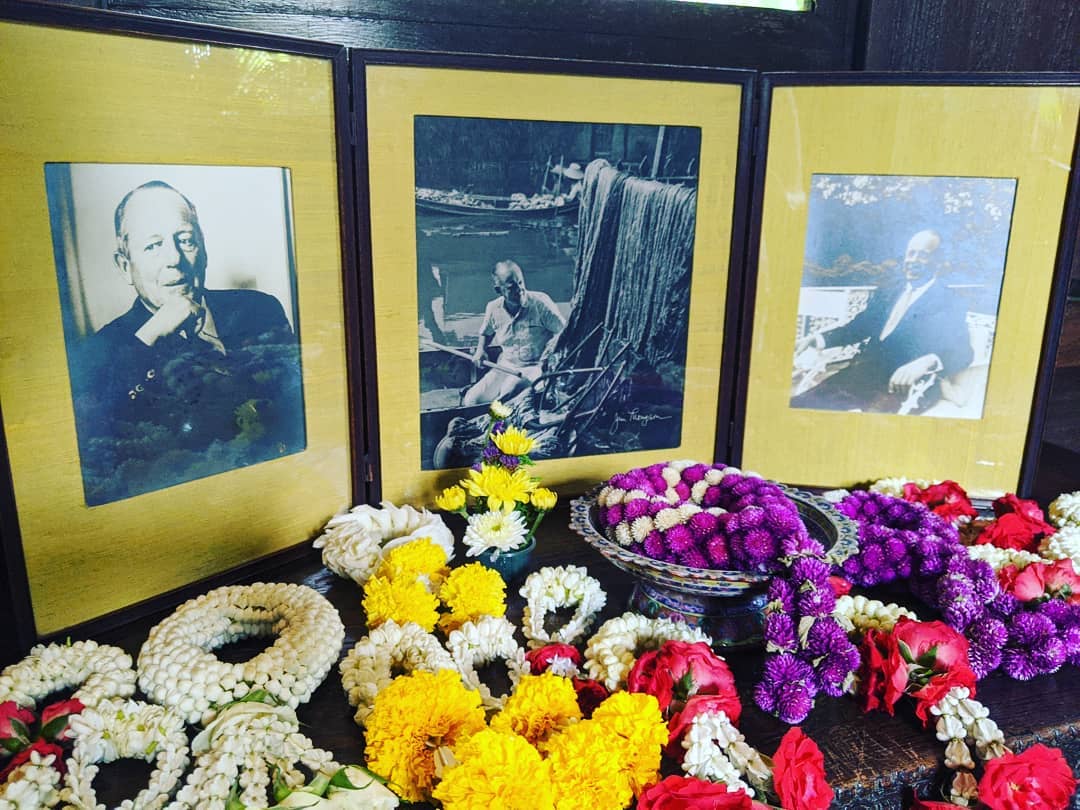 Naturally, there are all kinds of wild theories regarding what happened to Jim. He was eaten by a tiger, he was murdered by The CIA. He fell off a cliff into the sea and drowned, he was assassinated by Malaysian communists who had discovered his past work as an American spy.

But it seems we’ll never know for certain. All we have now is the wonderful Jim Thompson House, a beautiful, fascinating piece of history tucked away in central Bangkok. For more info on how to visit, take a look at their Facebook page.