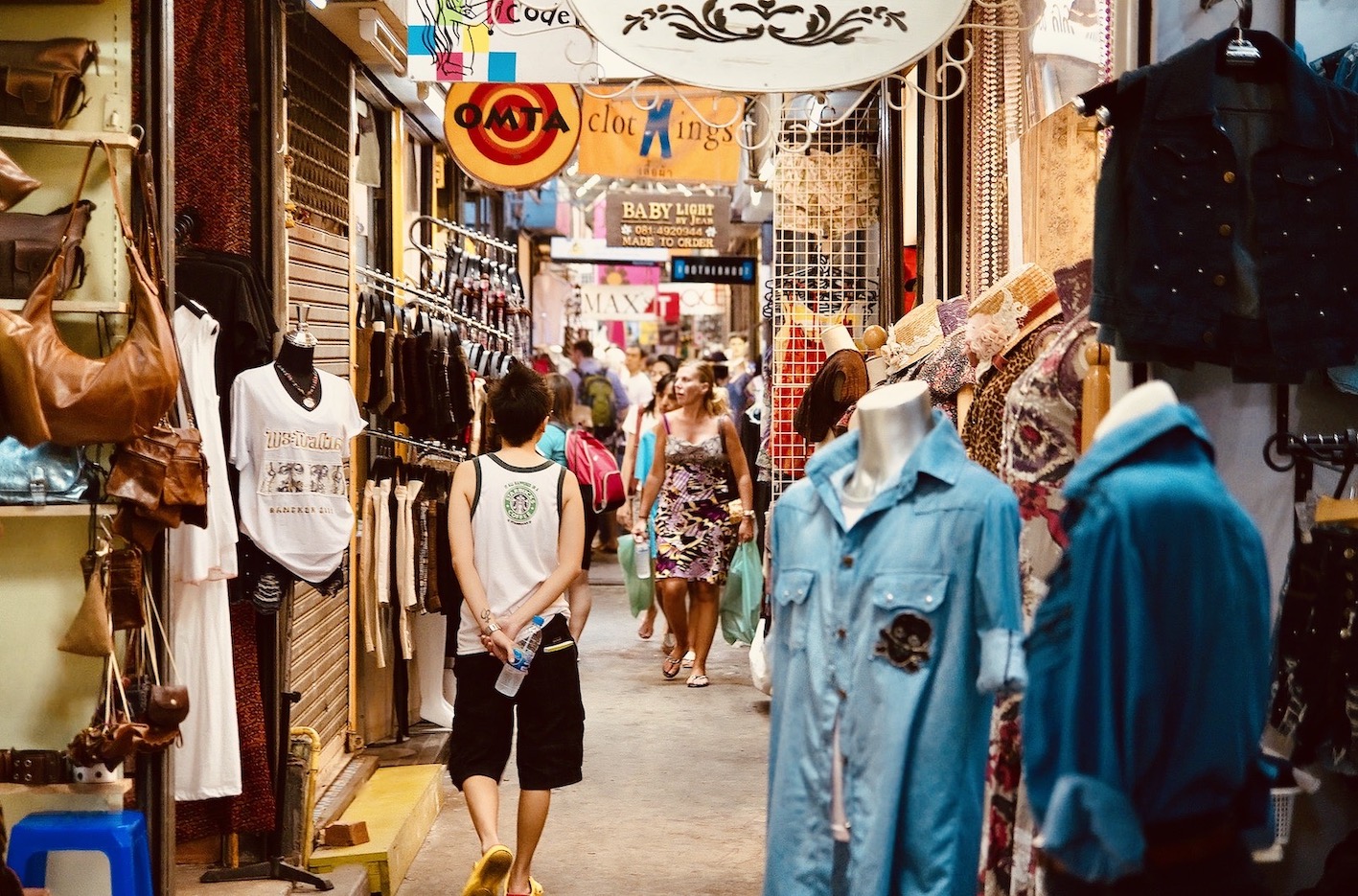 I do love myself a big old Asian market! You’ve got the smell of sizzling street food, the unpredictability of the haggling, the vast array of stuff on offer! I’ve certainly been to my fair share of markets throughout Asia. But looking back, not many were bigger or indeed bolder than Chatuchak Weekend Market in Bangkok. 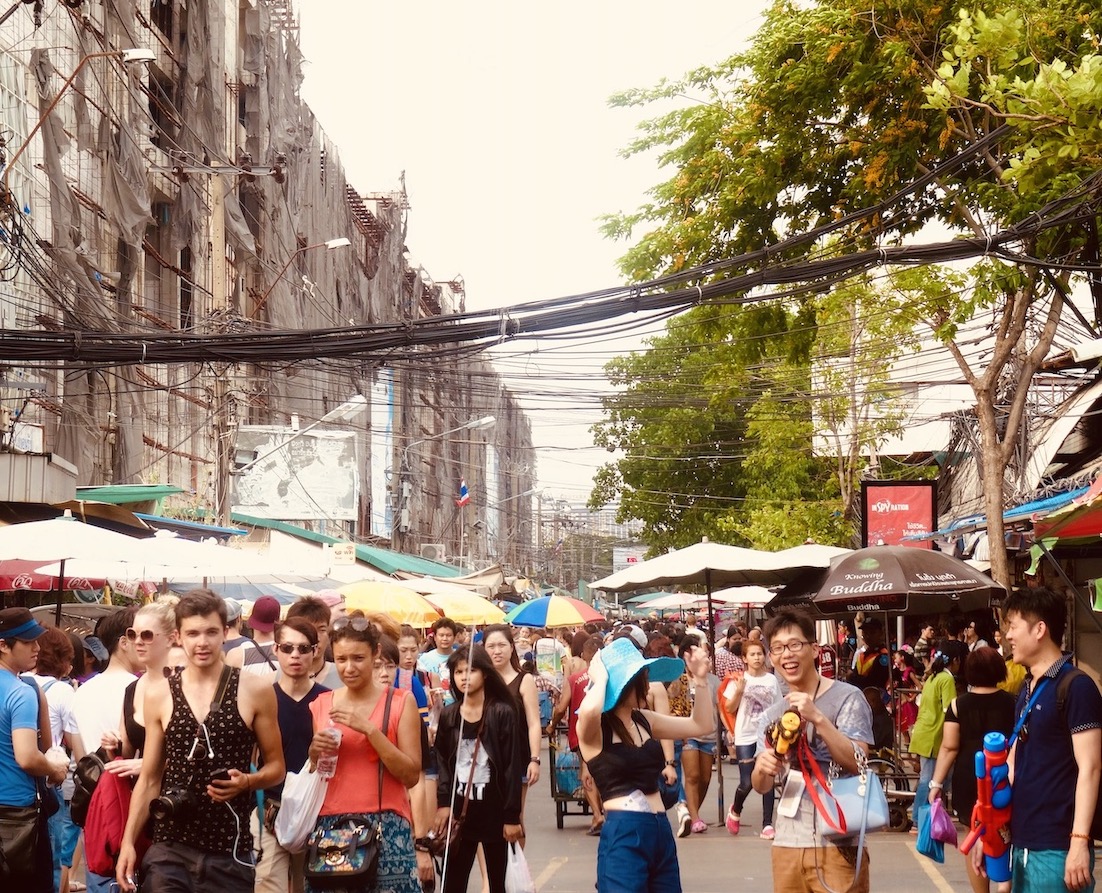 With twenty seven sections and a whopping fifteen thousand stalls spread across thirty five acres, Chatuchak is Thailand’s largest market. Open on Fridays, Saturdays and Sundays, they say over two hundred thousand people flood through its lanes each week. 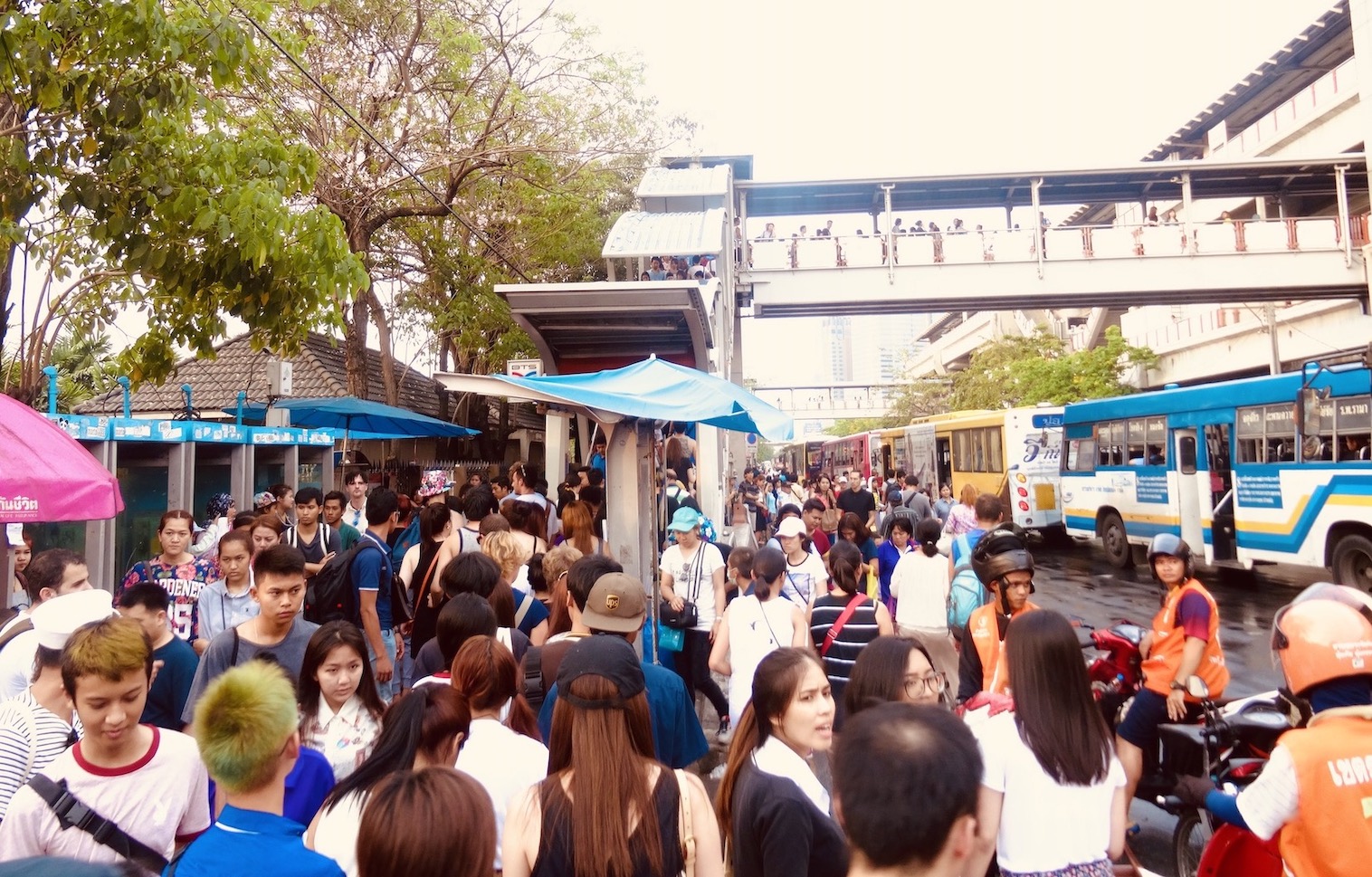 Right enough, I found myself engulfed in crowds on the afternoon of my visit. Because Chatuchak Weekend Market isn’t just a place to shop, for many Thais it’s one of the city’s trendiest hangout spots. A place to be seen and all that. 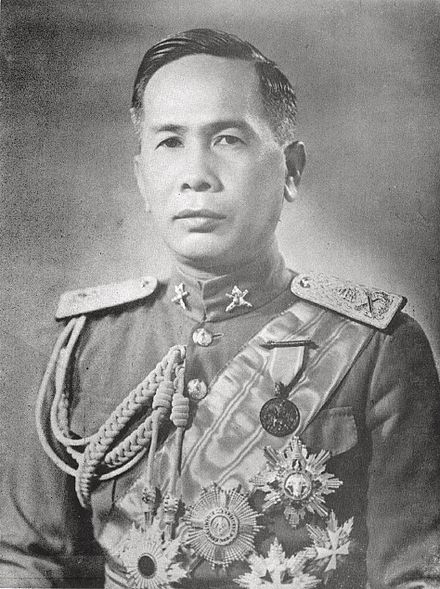 “Yo people, we gonna have markets!”

Chatuchak dates back to 1942 when then Prime Minister Plaek Phibunsongkhram announced that every province of Thailand should have a grand market! After several location changes across the city, it eventually settled into its current spot, just south of Chatuchak Park, in the early 1980s.

I’d read that one can buy pretty much anything in Chatuchak Market. Within minutes of arriving I’d gotten lost in its knotted lanes. There were stalls selling kitchenware, fake football shirts, pet fish and birds. I passed jewellery stores, plant and flower trolleys, shoe shops and DVD dens. 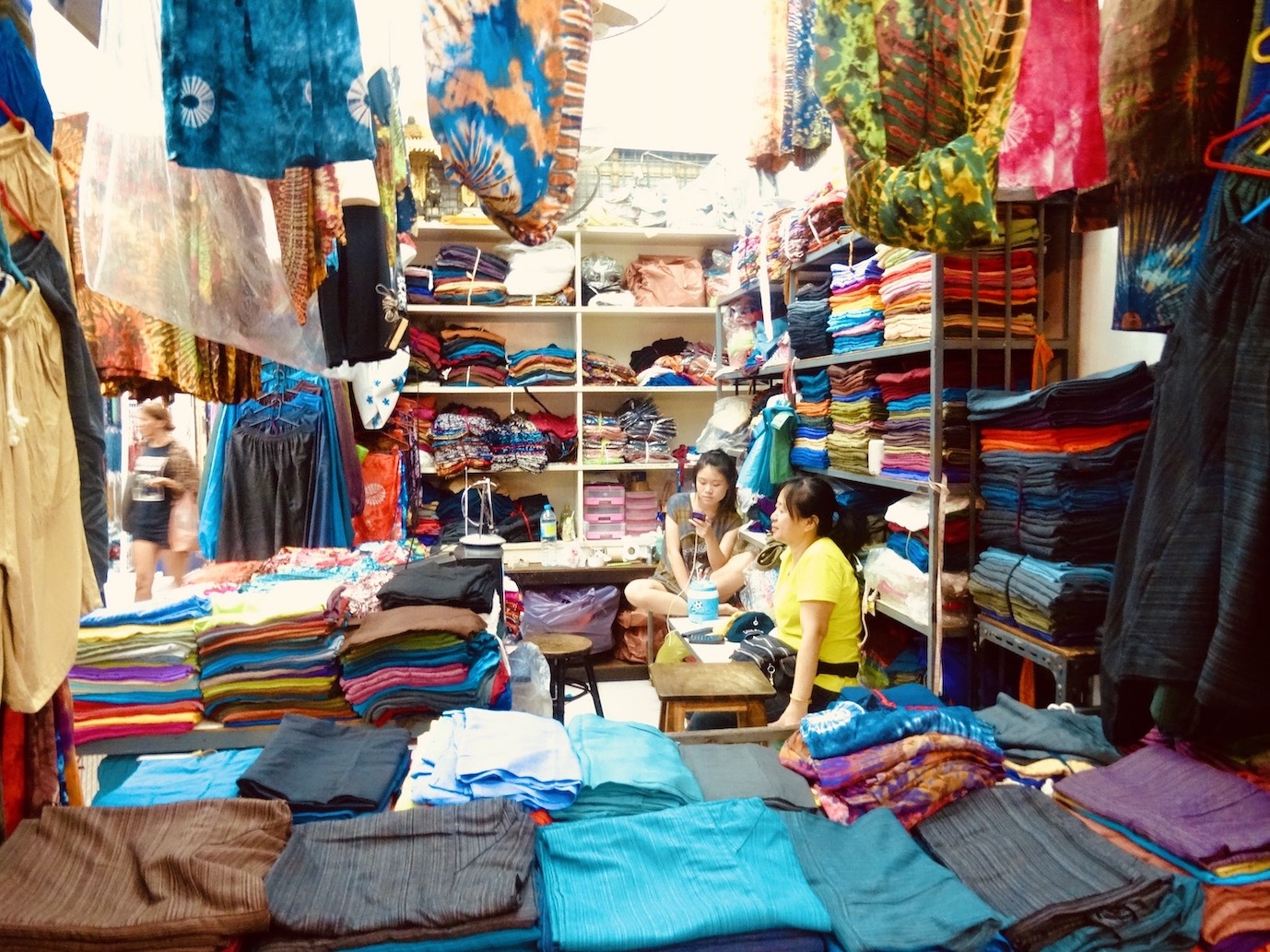 Finally, I wandered into a giant clothes section and… yes! … chanced upon a place selling Thai Fishermen pants. I subsequently bought two pairs, which served me well throughout my two months exploring Thailand. Exceptionally light and comfortable, I ended up using them as pyjama bottoms when I got back to The UK. 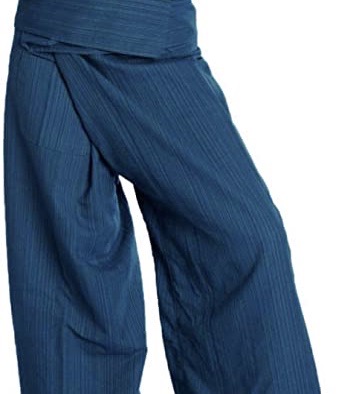 Naturally there’s a giant food section offering every Thai dish imaginable. It was my first week in the country, hence I was keen to try some Pad Thai, Thailand’s world famous stir fry noodle dish. With dozens and dozens of stalls claiming to have “the best Pad Thai in Bangkok,” after a bit of browsing I settled on a place called The Pad Thai Queen. 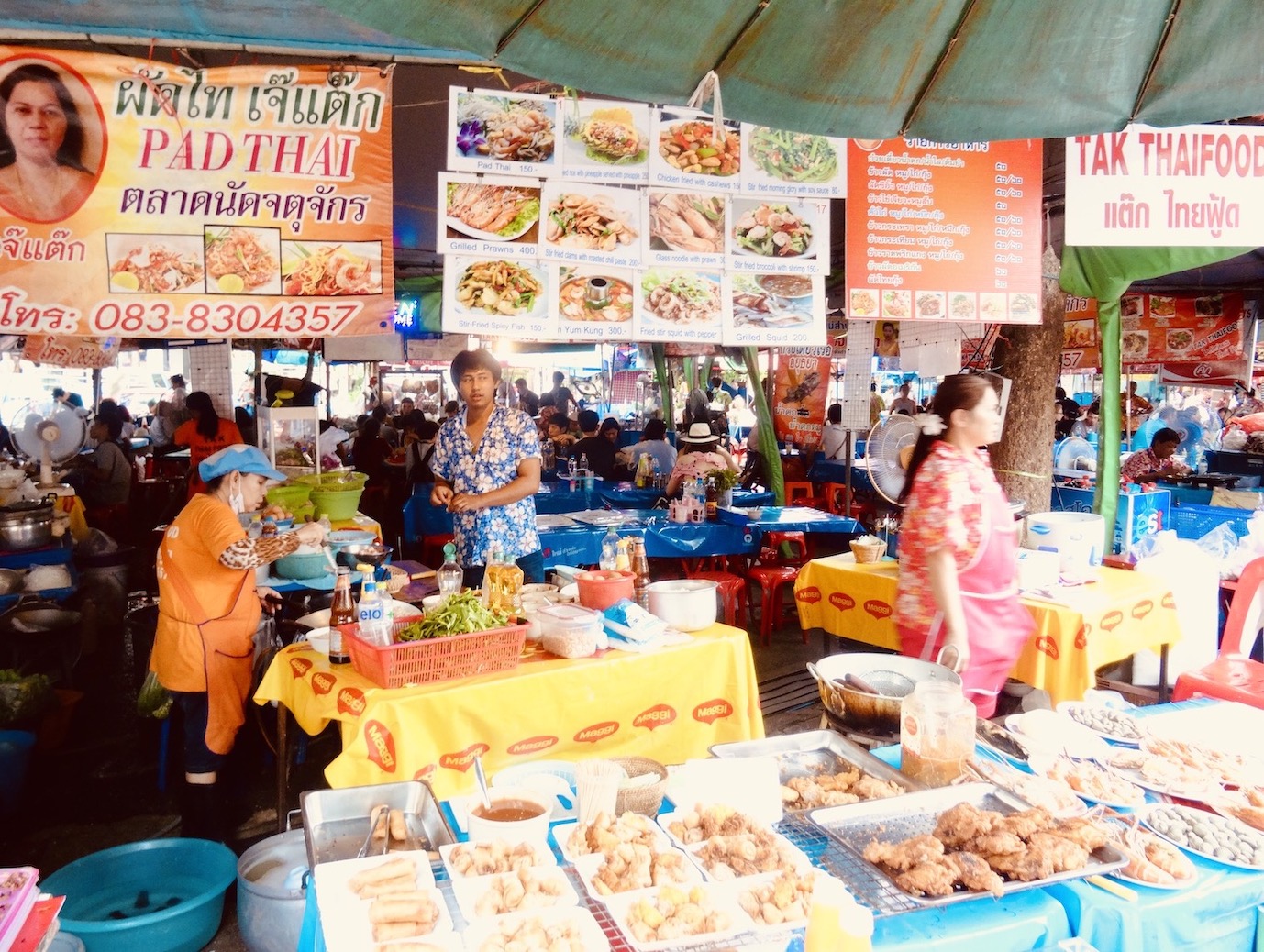 Often served with chicken or beef, my first Pad Thai came with shrimp. And of course the usual delicious array of scrambled egg, fried tofu, crushed nuts and bean sprouts. I had countless Pad Thais from all over Thailand, but nothing could beat that first dish. 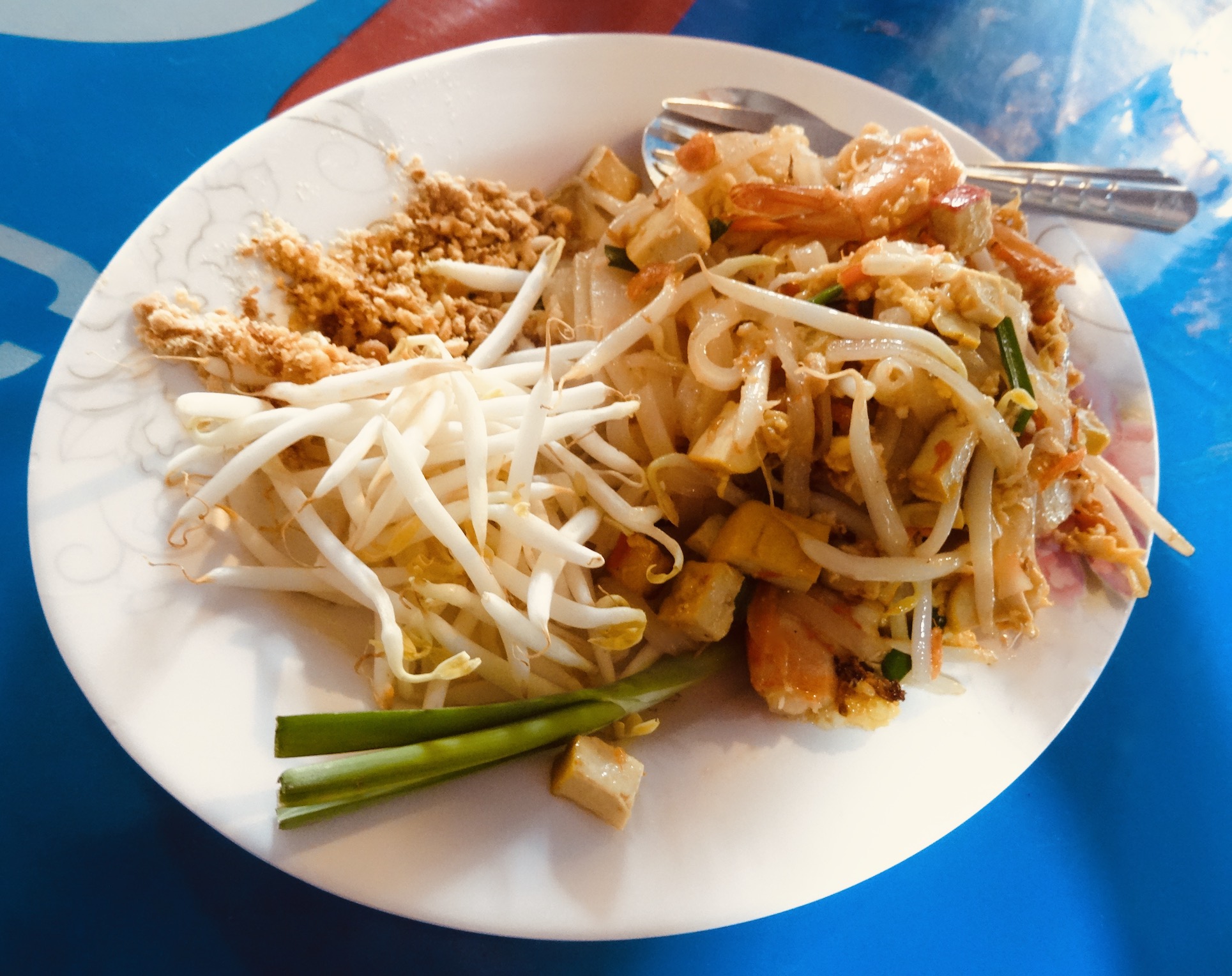 There are numerous theories as to how the original recipe came about. The most fun of which involves the aforementioned Prime Minister, Plaek Phibunsongkhram. Some historians insist he and a team of advisors created Pad Thai during the Second World War.

They wanted a healthy dish full of homegrown ingredients that they could name after the country to galvanise national pride. However, with Thailand suffering a rice shortage at the time due to the war and flooding, noodles ended up replacing the typical choice of rice.

What to See and Do, Bangkok. 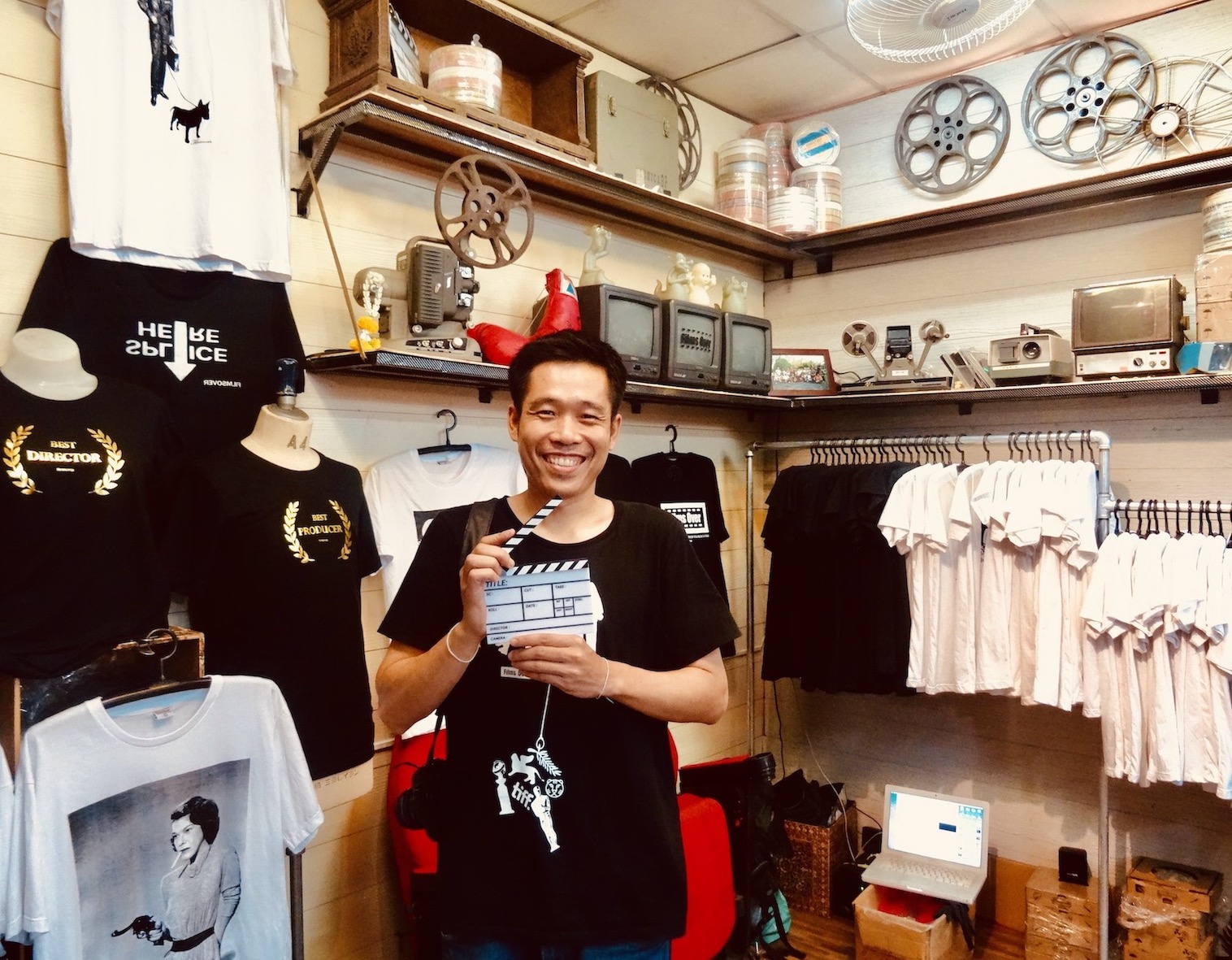 With no more shopping aspirations that day, I was free to wander aimlessly through Chatuchak’s mazy walkways. I passed massage parlours, tattoo studios, hairdressers and currency exchange offices. One place that did stop me in my tracks was the curious Films Over, a movie merchandise store run by a friendly local man.

It was a lovingly crafted little shop with movie posters, model film reels, t-shirts, postcards and a small collection of blu-rays. Charmed by Somchai, the store’s infectiously positive owner, I picked up a few t-shirts as we chatted about Hitchcock and Bogart. 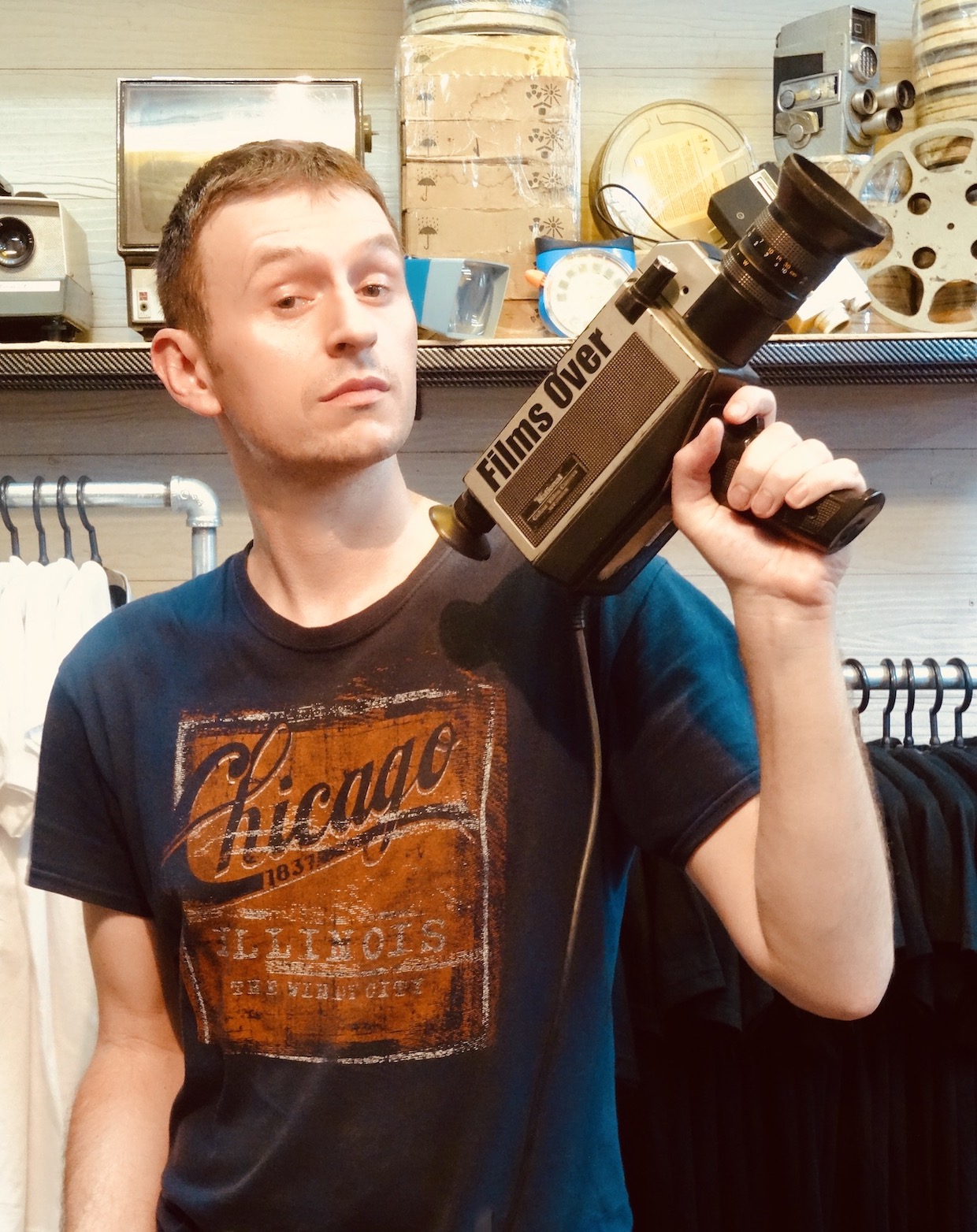 Before leaving, he asked me to pose with his model store camera. He was going to start a Facebook page, he said, and was asking for a photo of everyone who bought something. “Give me Bond!” he laughed, as he clicked away. Well… I did my best. Sadly, I never did find that Facebook page, nor indeed any online trace of Films Over in the years that have passed. I do hope his business is still going. 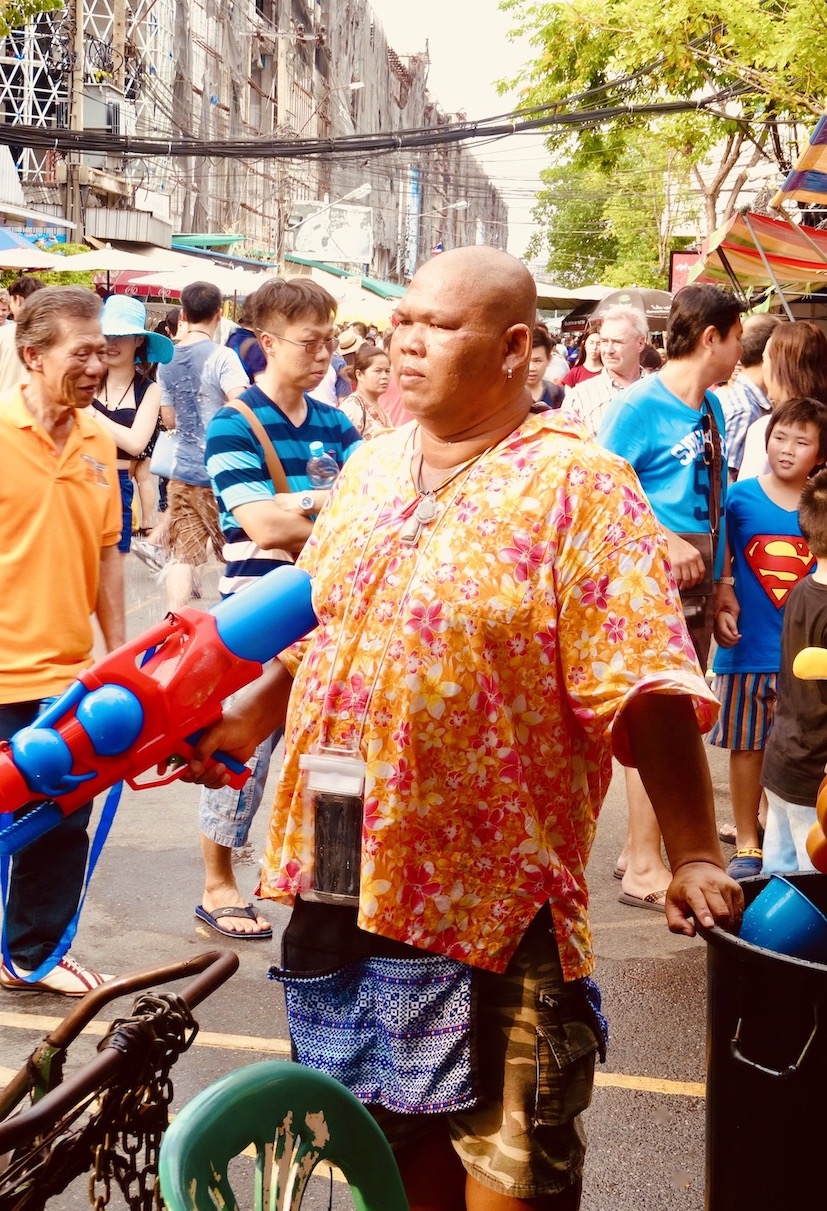 In the outer lanes I came across dozens of vendors selling water guns. The city was about to descend into watermania with the arrival of Songkran. Celebrated every April the 13th, and typically lasting five days, this is Thailand’s New Year holiday. The country’s annual water festival is part of the celebrations, a frenetic time where people soak each other with water guns, balloons and even buckets! 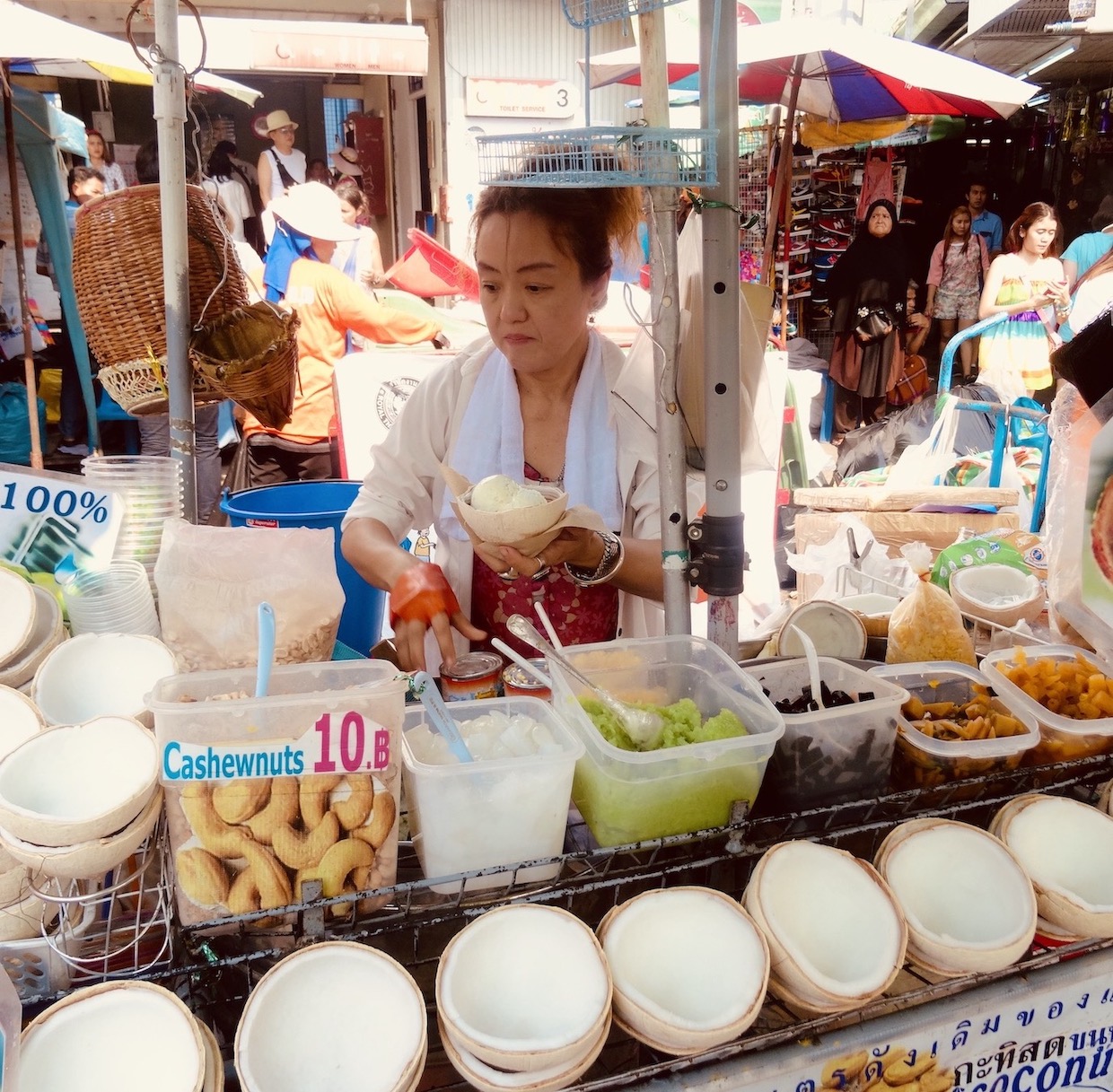 I’d been exploring for over two hours when I got the chance to tick another essential Bangkok activity off my list. They say you can’t leave the Thai capital without trying Itim Kati, the city’s signature Coconut Milk Ice Cream. Served in a coconut husk, it’s wonderfully creamy, not to mention refreshing on a sweltering day. 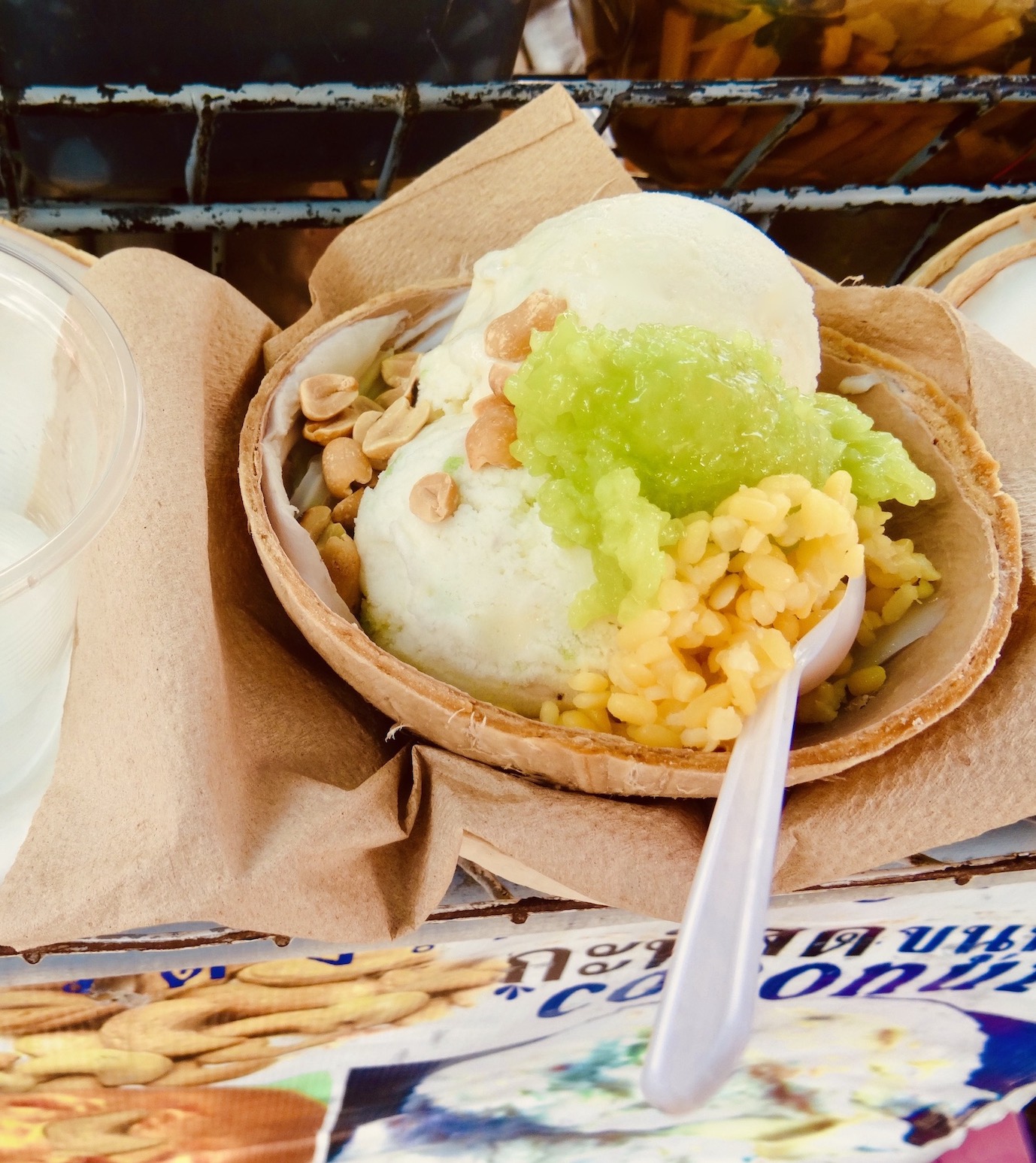 Feeling daring, I asked for all available toppings. That’s several slices of fresh coconut, crushed ice with lime, sweet mango sticky rice and a scattering of salty peanuts. It was just fantastic! The perfect end to my time at one of Asia’s most impressive markets.