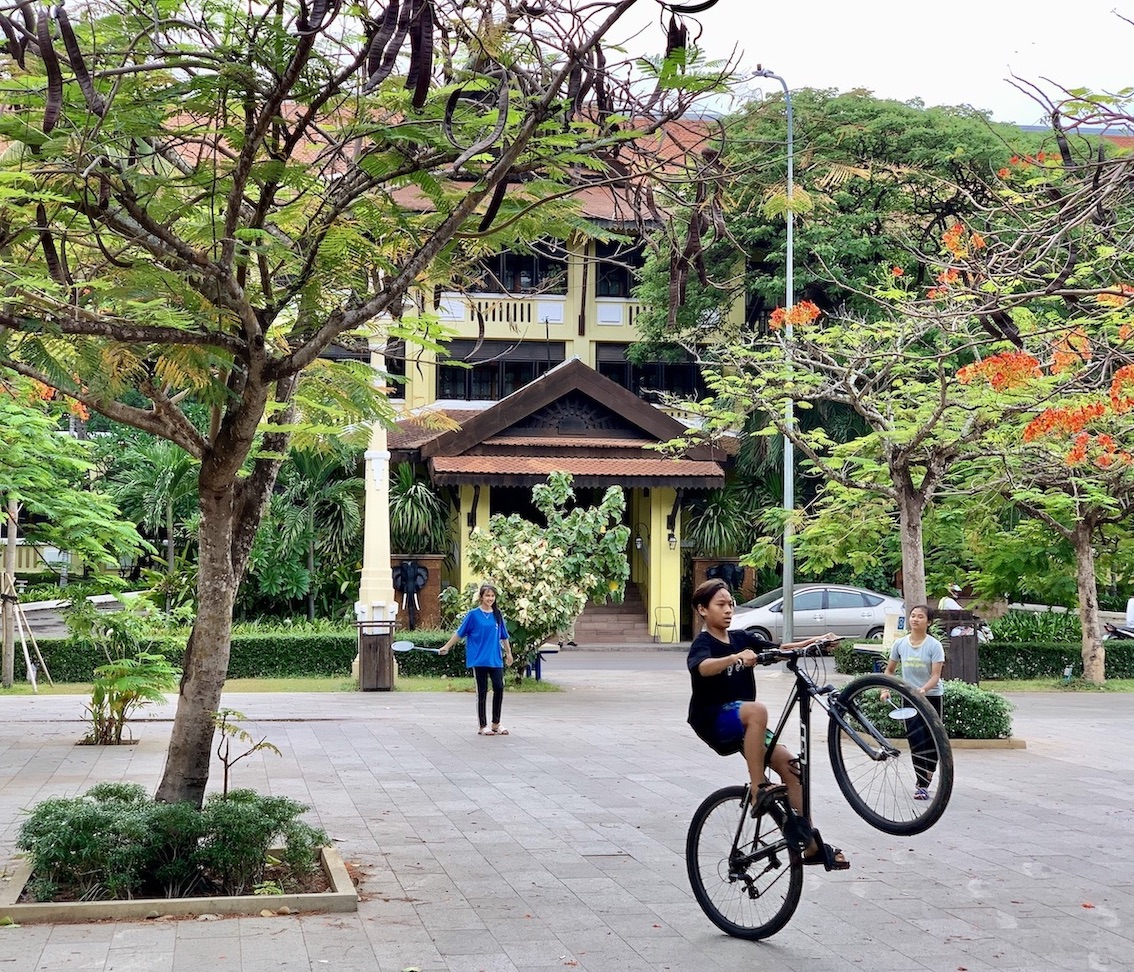 I’ve spent a great deal of time championing the city of Siem Reap on these pages of mine. Hopefully, at the very least, I’ve dispelled the misguided notion that there’s not much to do beyond the world famous temples. That said, it’s probably time to share one of the the most disappointing things about this dusty town. Basically, the lack of green spaces really started to grind away at us during our seven months here. 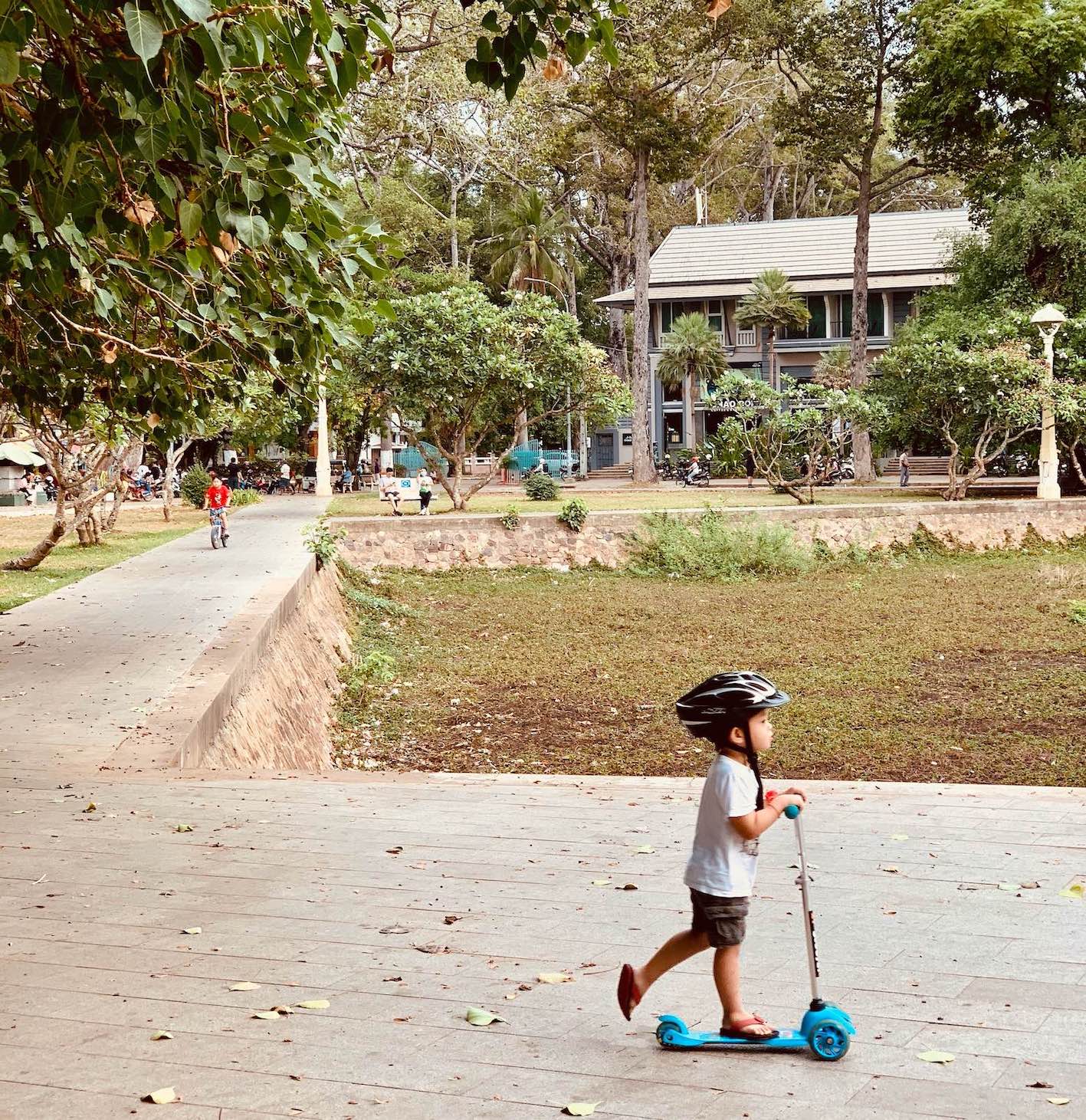 Wherever I am in the world, I’ve always had a large park of some description within distance. Somewhere I can head to for an afternoon jog or an evening stroll with a podcast. Even in the concrete jungle cities of China this was achievable.

Not the case, it turns out, in Siem Reap. As idyllic as our lodgings were at the wonderful Apsara Greenland Boutique Hotel, there was absolutely no option for a walk in the surrounding districts. No green oasis in which to escape the city’s dusty roads, chaotic traffic, lack of pavements and bothersome street dogs. 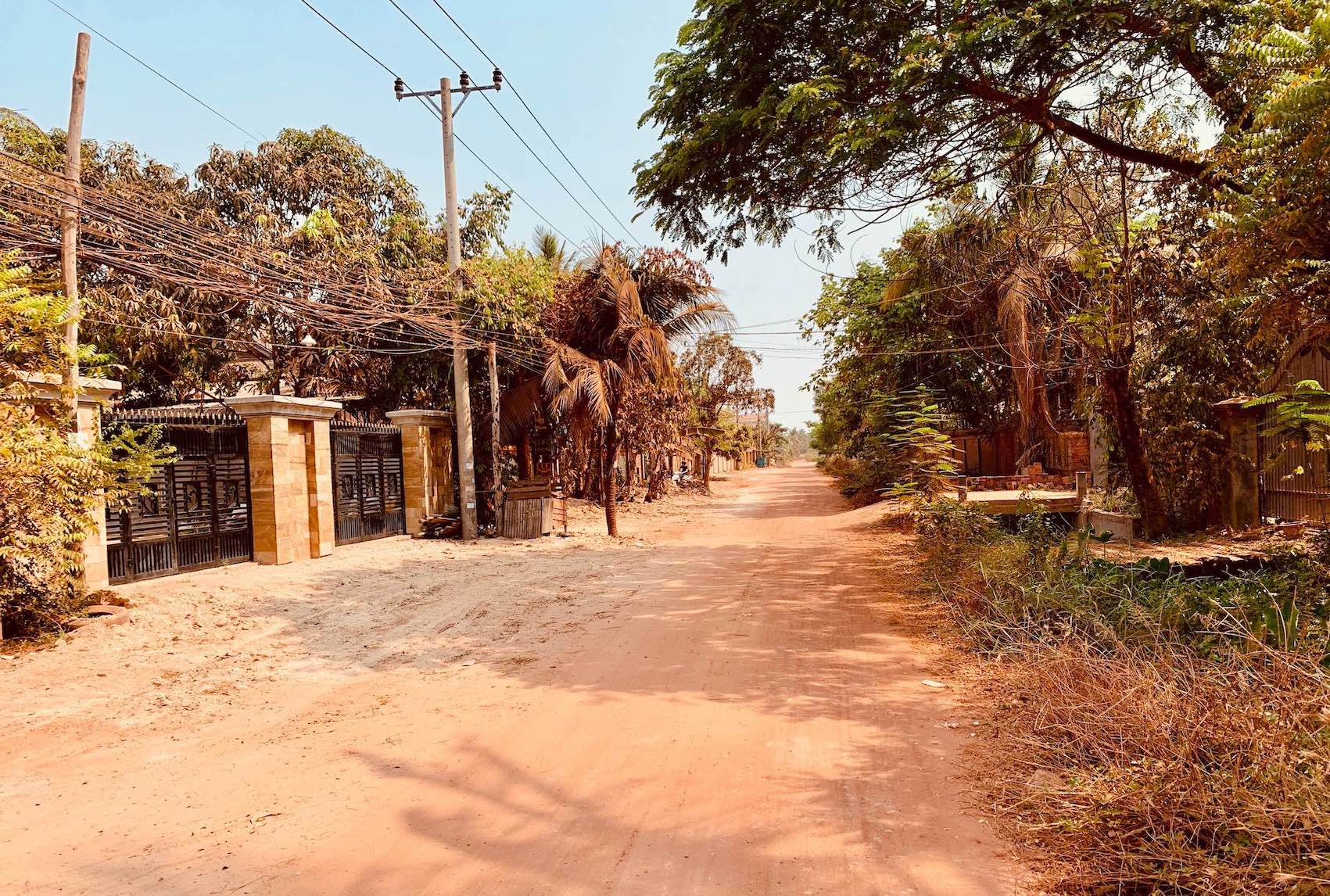 Our local street in the fierce afternoon sun.

In fact, I remember our surprise when Sladja and I discovered that in actual fact there was only one park in the entire city. Yikes. Curious as to what lay in store, we headed out to The Royal Independence Gardens one refreshingly overcast May afternoon. 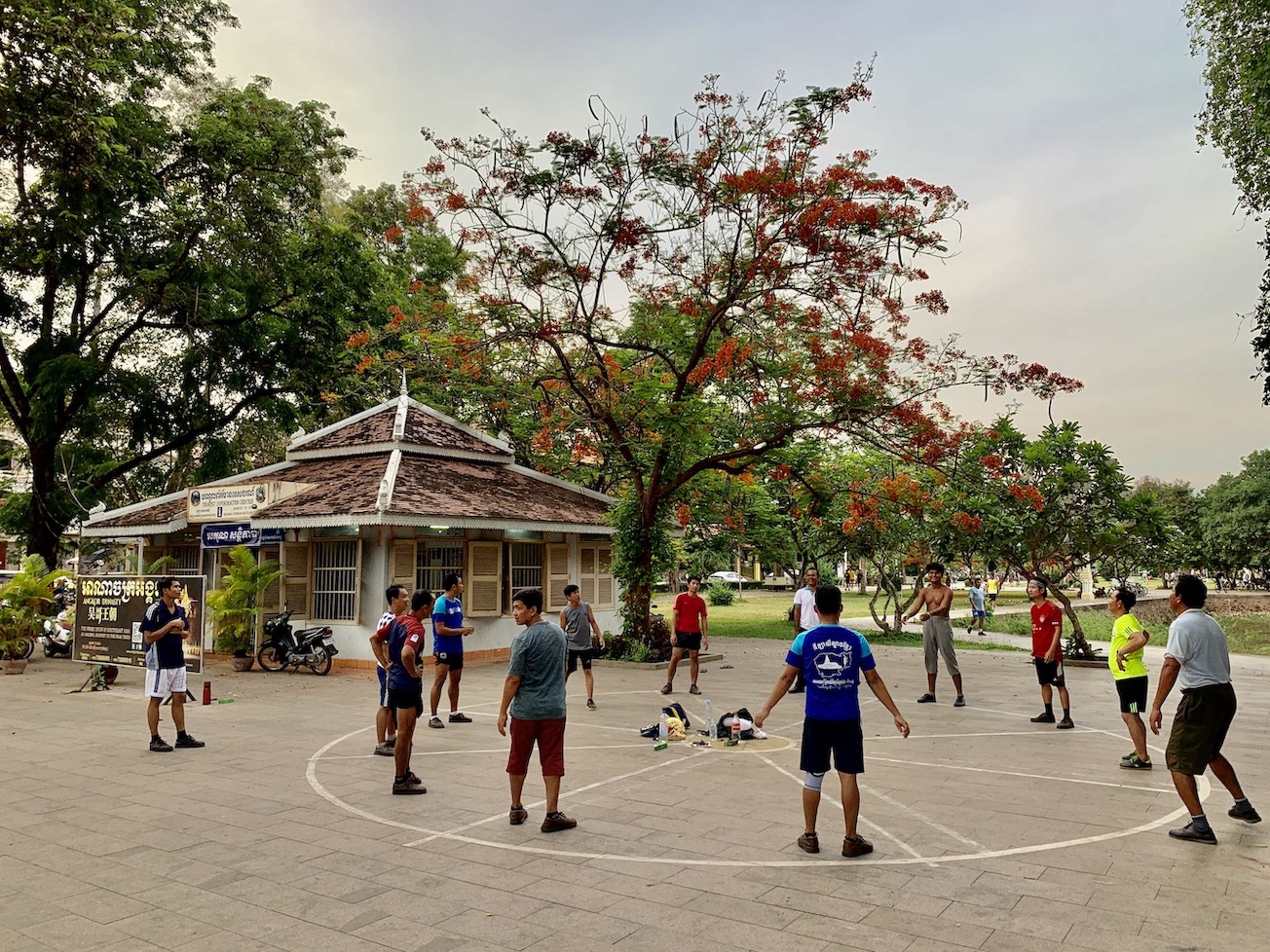 The gardens were named after the famous meeting between King Sihanouk and General Lon Nol om in the 1950s that led to Cambodia’s independence from its French, colonial overlords. The two men plotted their crusade at the nearby Royal Residence, sadly closed to visitors. 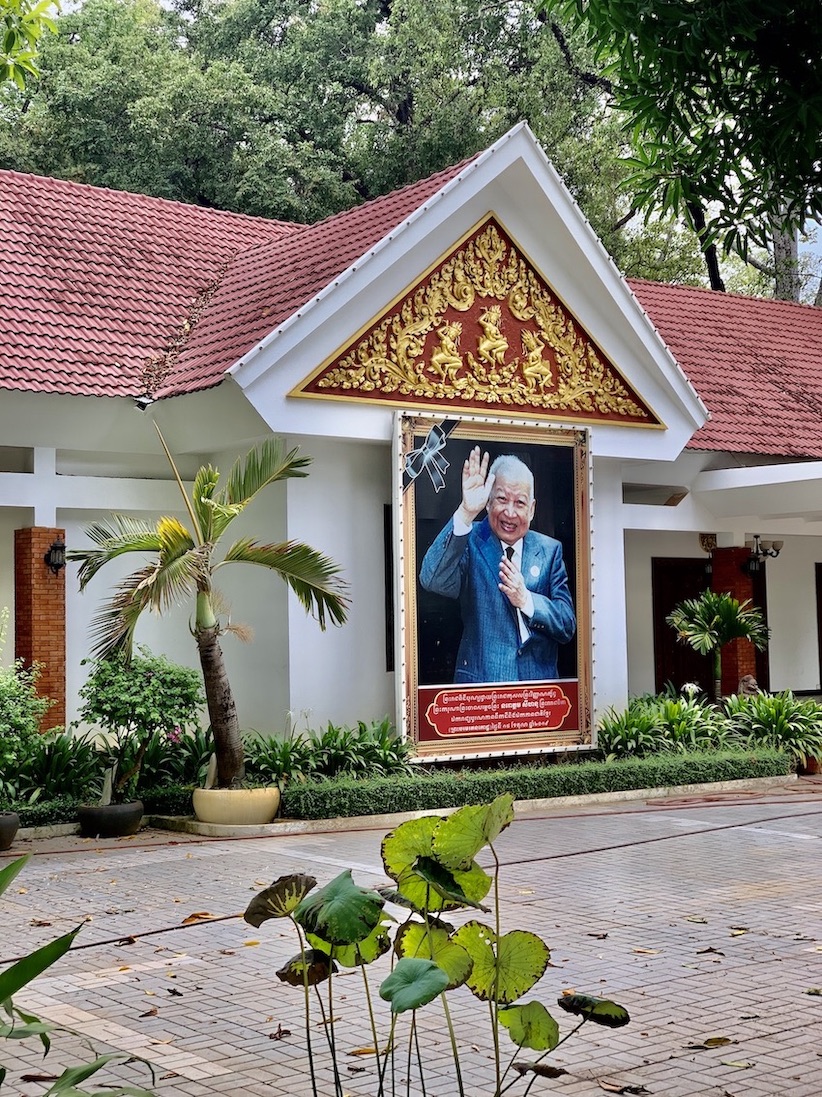 I should point out that the word gardens is actually misleading, as this is really just a tiny park. A full loop, without stopping, would take you under ten minutes. On arrival that afternoon, we stopped to watch a sizeable group of local men playing hacky sack at the entrance, next to the tourist information office. 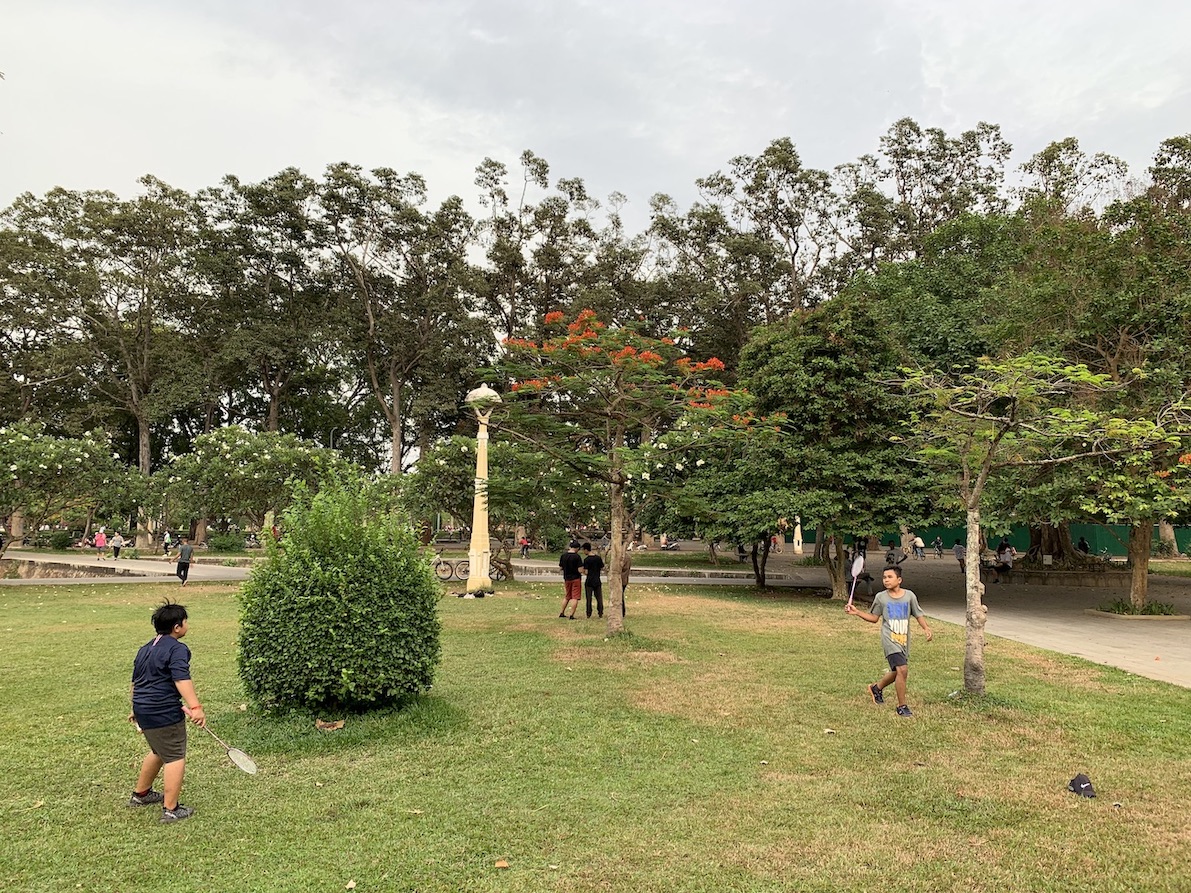 Siem Reap locals certainly take advantage of their modest little park. That evening we saw all kinds of activities taking place across the lawn. Here and there, families picnicked, while a pair of kids messed around with badminton rackets. 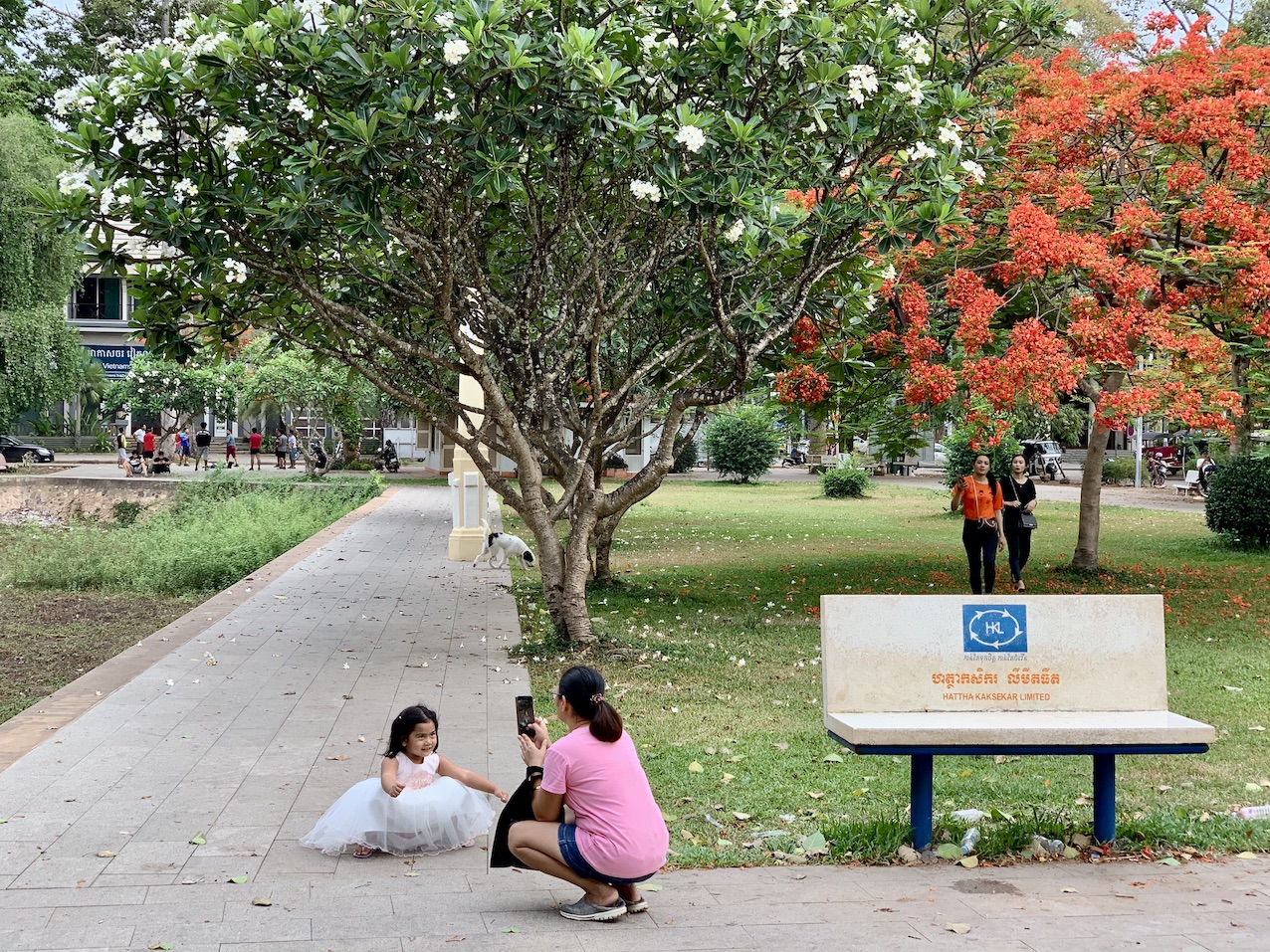 A little boy whizzed by on a scooter. A mother took staged photos of her pretty girl in a princess dress. A grizzled dog meanwhile, tired from the exertions of chasing a stick, slumped to the ground for a timeout. After the long walk from our hotel, we knew exactly how he felt. 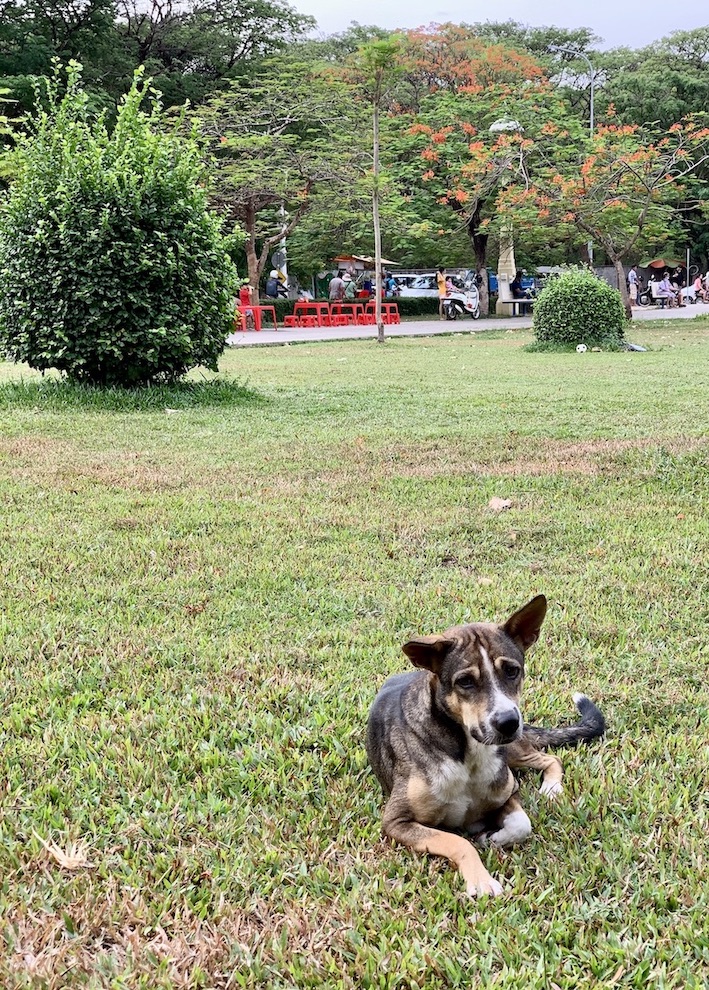 Consequently, we decided to take a load off too. Settling down on a free bench, we found ourselves sat directly opposite this cool dude. Sandals off, nodding his head to the music on his earphones, it seemed like he didn’t have a care in the world. For those fleeting moments in the park at least. 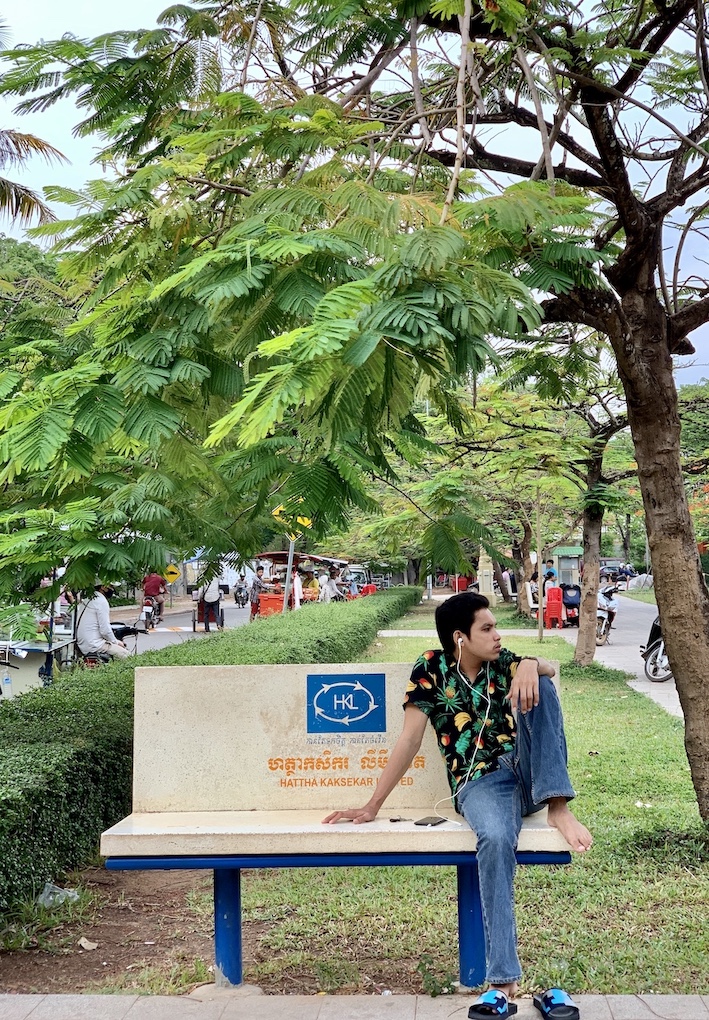 Besides people watching, there is one genuinely cool attraction. Every evening, in the hour leading to sunset, a large colony of fruit bats circles en masse. That day, the light already beginning to fade, we heard hundreds of them screeching away in the trees.

There are a number of interesting landmarks scattered around the gardens. For example, two of the city’s most distinguished hotels border the park. For more info on both Raffles Hotel and Victoria Angkor Hotel, read my article Where To Stay in Siem Reap.

Furthermore, look out for the small market that serves visitors to the nearby Ya Tep Shrine. Consisting of just half a dozen stalls, the market sits behind the bat trees. The vendors here sell fruit, vegetables and flowers and at first glance the place looks utterly charming. 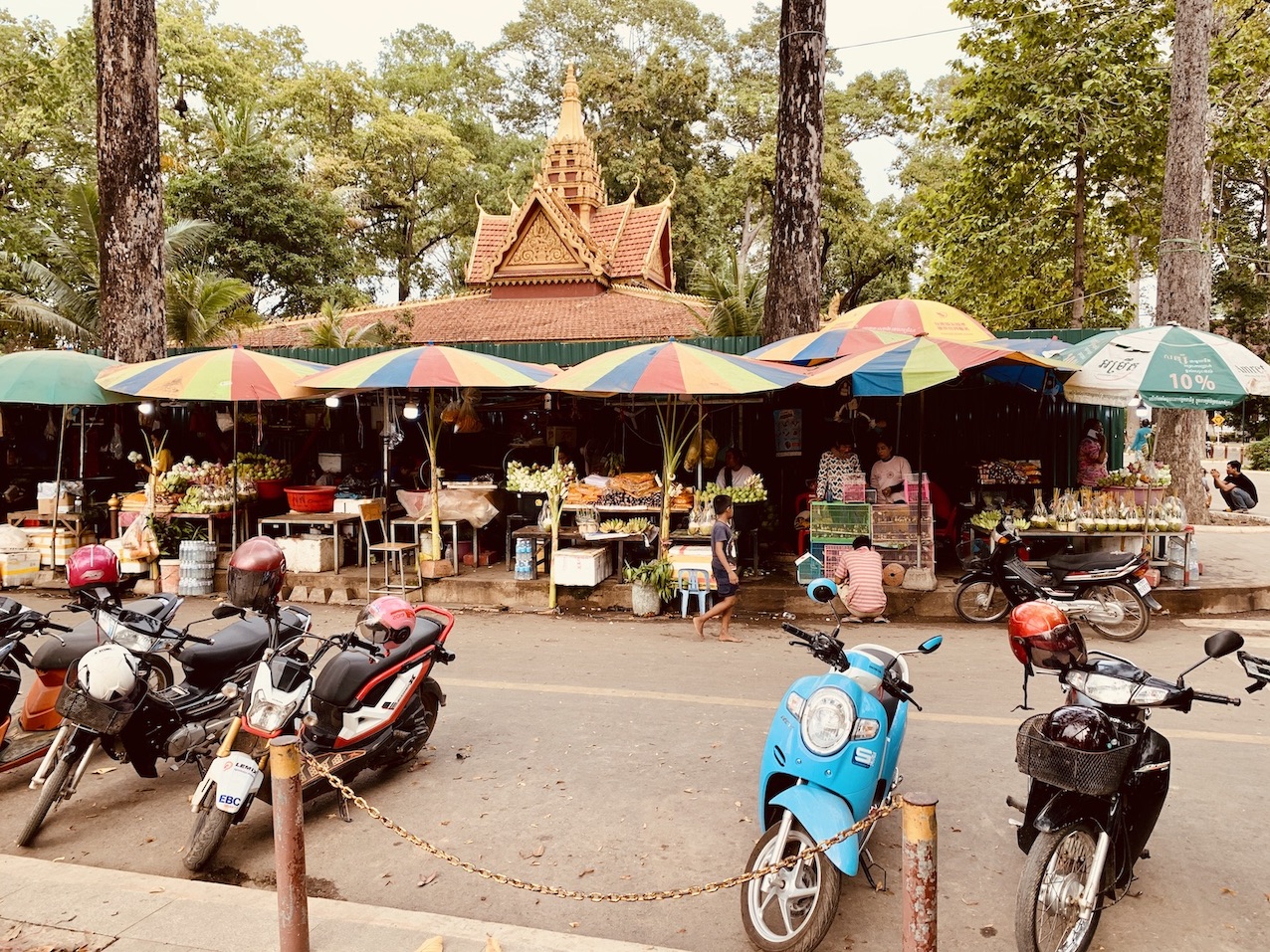 The market at Royal Independence Gardens.

Upon closer inspection though, we were both disheartened to see a stall with cages of little birds. The sound of their high-pitched chirping could be heard from the other side of the road, competing with the sounds of the bats.

Finally, there’s Ya Tep Shrine itself, located right in the middle of the road next to the market. Although a tiny shrine, it’s very popular with locals, who often dart across the street to reach it. Much to the annoyance of honking cars, tuk tuks and motorcycles. 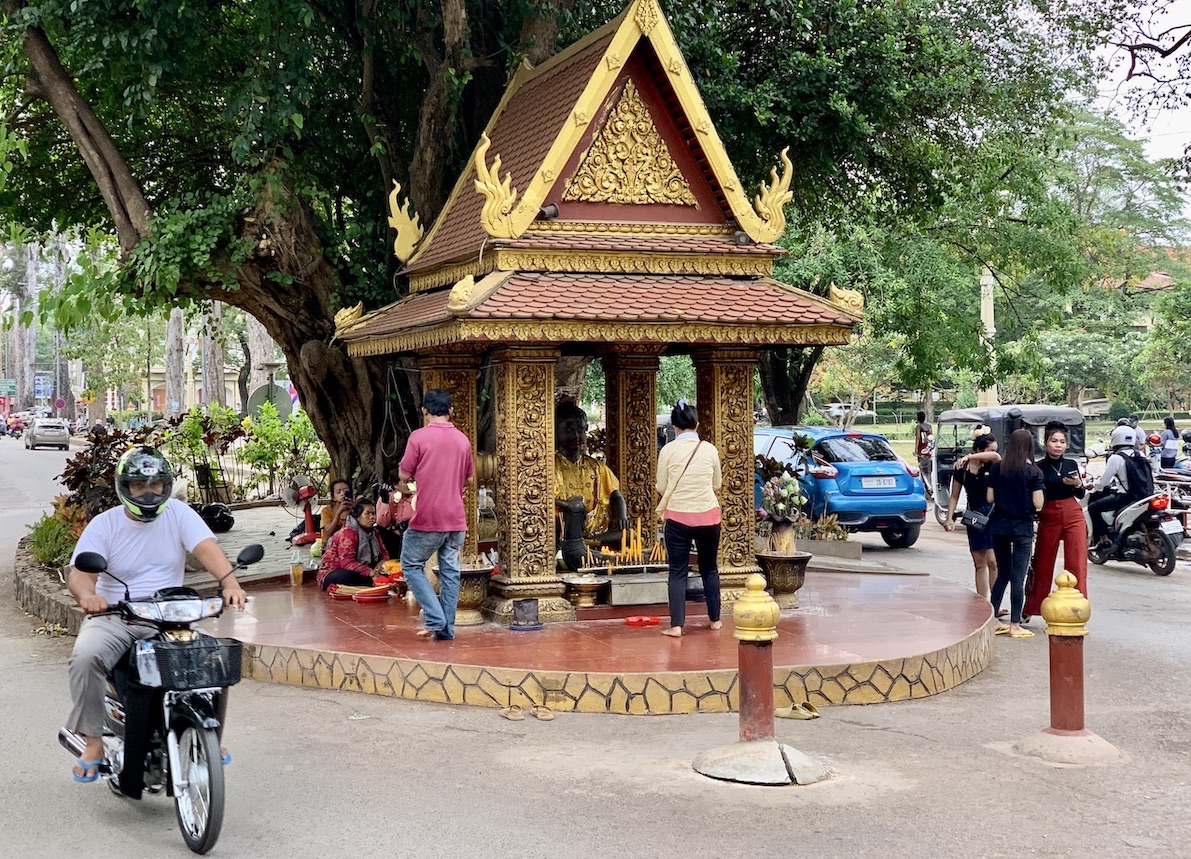 They come to pay their respects to a powerful spirit, known locally as Neak-Ta. Amusingly, this spirit is said to bring financial fortune, especially to those playing the lottery. As a result, the shrine receives plenty of visitors on the day of lottery draws. Classic. 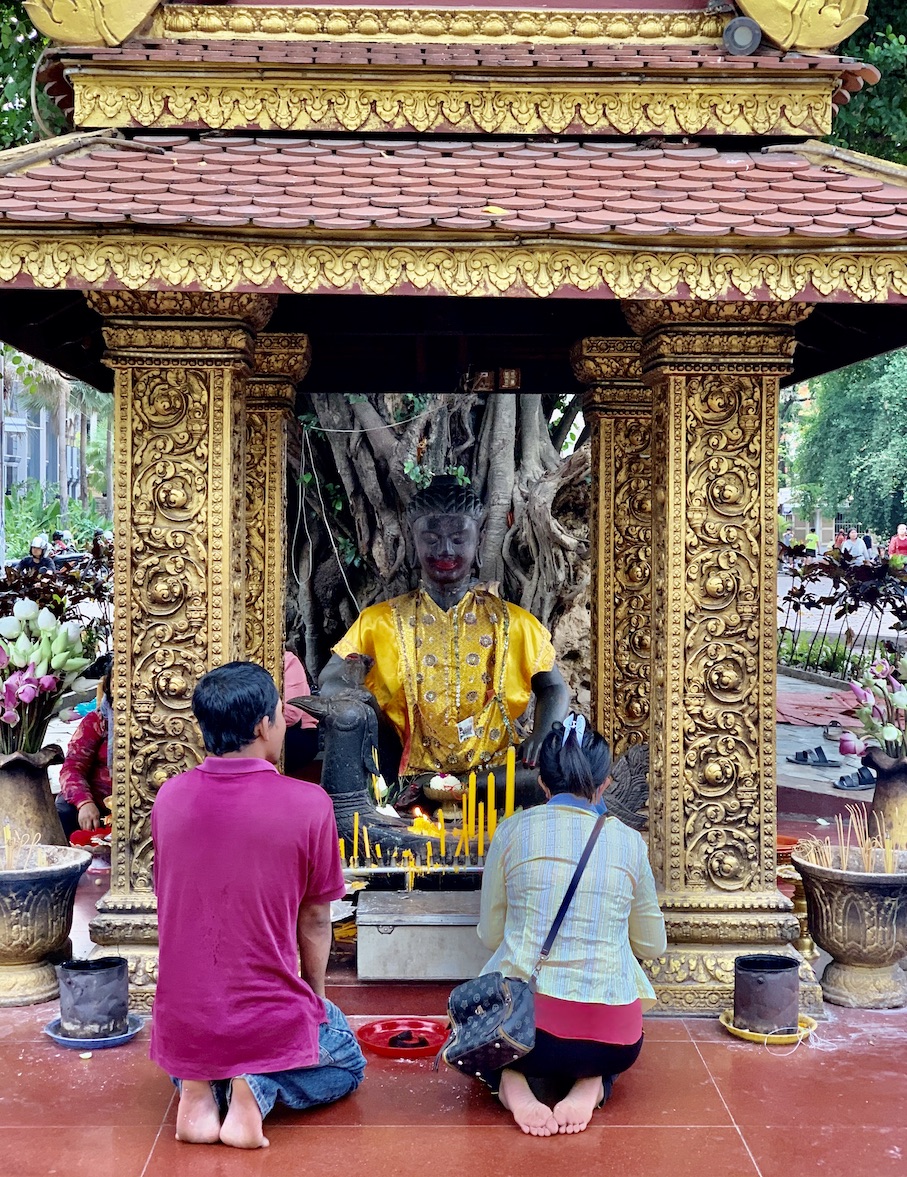 All in all I would recommend a visit to the Royal Independence Gardens, a charming, albeit understated Siem Reap sight. It’s great for people watching, the bats are amazing and you’ve got one of Siem Reap’s most unusual shrines. If you’re feeling flush, you could also grab some dinner at The Victoria Angkor Hotel’s swanky restaurant, Le Connaisseur. 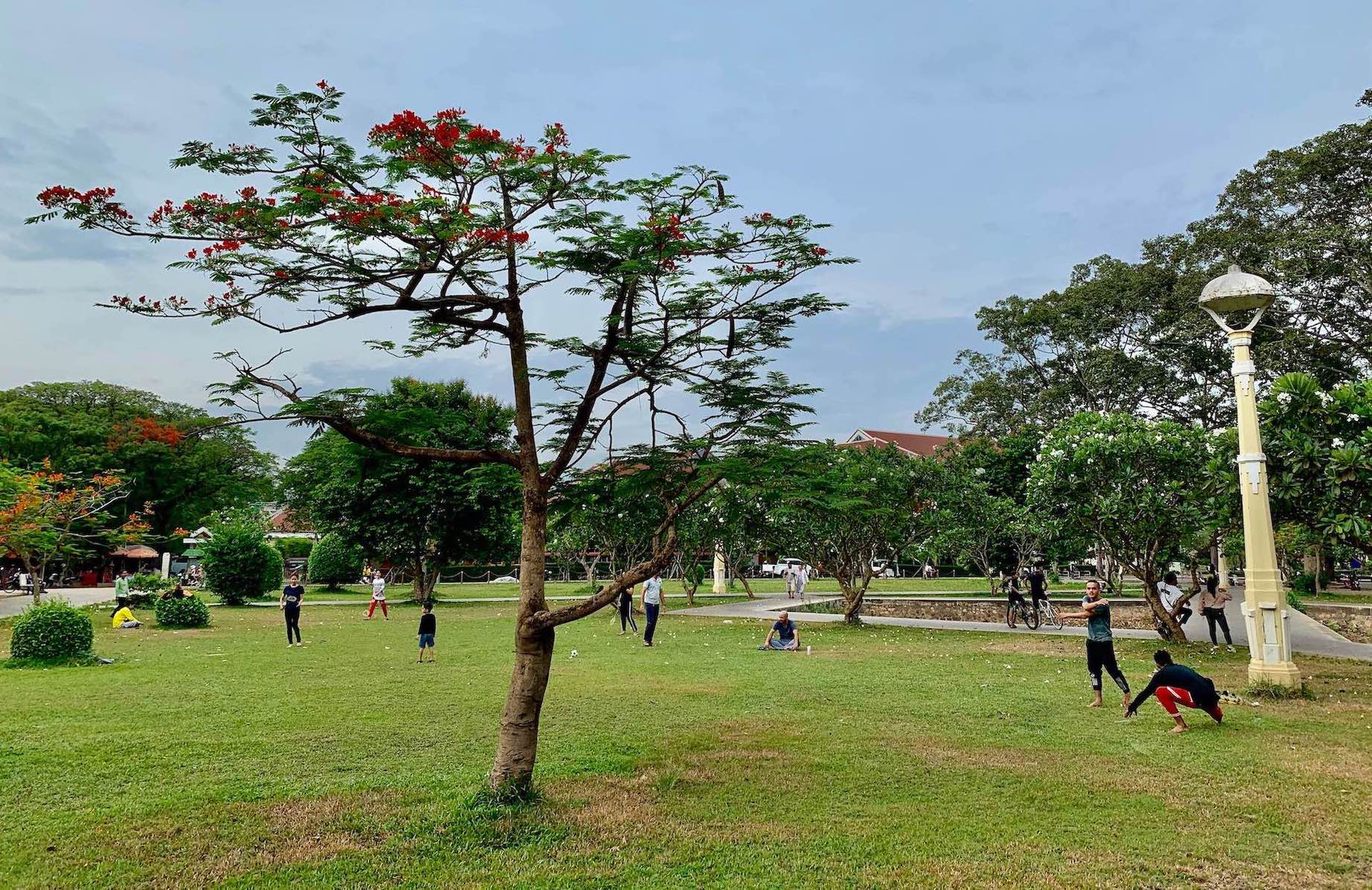