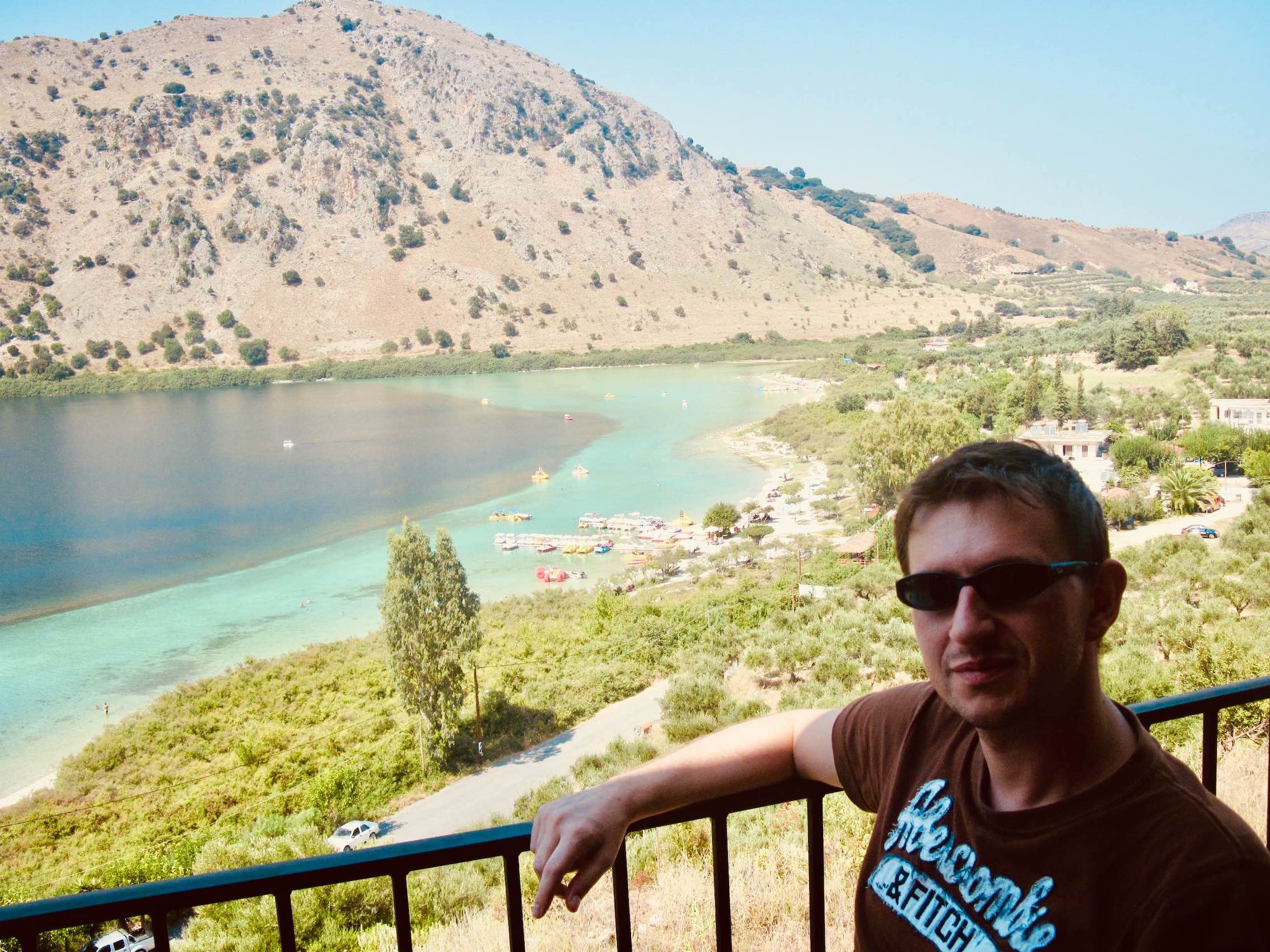 Have you ever thought about what kind of traveller you are? They say there are around five classic types, if you buy into that sort of thing. The Adventurer, for example, is all about pulse-raising activities like wind surfing, hang gliding and bouldering. Nah, that’s not me.

I’m certainly more like The Epicurean, someone who always seeks out the best places to eat. Someone who will, within reason, try any dish once. Moreover, I identify with The Curator, someone who tries to explore as much of the local culture and traditions as possible. And maybe there’s even a bit of The Chameleon in me, the traveller who relishes new opportunities and experiences.

Finally, there’s The Unwinder, the traveller who is all about chilling out. Preferably on a beach, headphones on, cocktail in hand. For the most part I haven’t been much of an unwinder these past twenty years of global travel. However, there is definitely a time and a place for everything. Step forward the gorgeous Greek island of Crete!

In September 2011 I was living in Amsterdam. There, I worked for a Dutch media company writing and voice-overing movie and music news. Sometimes, I had to jet off to The U.S. to interview a Hollywood star or two. It was a fun job, but also quite demanding in many ways.

Lying around on a beach had never been top of my travel wish list. But that autumn I just wanted to rest… rest… and rest some more. I can’t remember how my attention got drawn to Crete. But when it did I immediately found myself attracted to a peaceful little village called Georgioupolis on the island’s north coast.

Home to just under a thousand locals, this fishing-village-turned-tourist-town took its name from Prince George of Greece and Denmark, who was Crete’s High Commissioner in the final years of the Ottoman occupation. 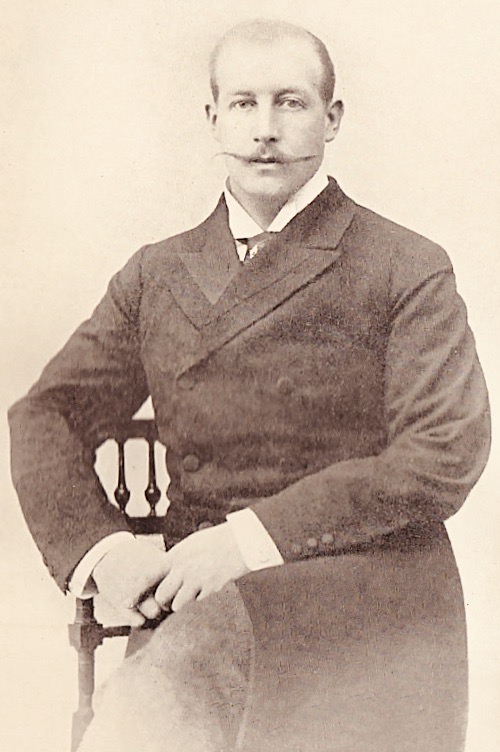 Prince George: The moustache hadn’t worked out quite as he’d hoped.

With very little to do in terms of sights, Georgioupolis was just what I was looking for. Especially the fact that it had managed to stay somewhat under-the-radar, despite having a lovely nine-kilometre stretch of beach. On that first day I strolled down the sands, picked out a quiet spot and settled down with Keith Richards’ excellent autobiography Life. 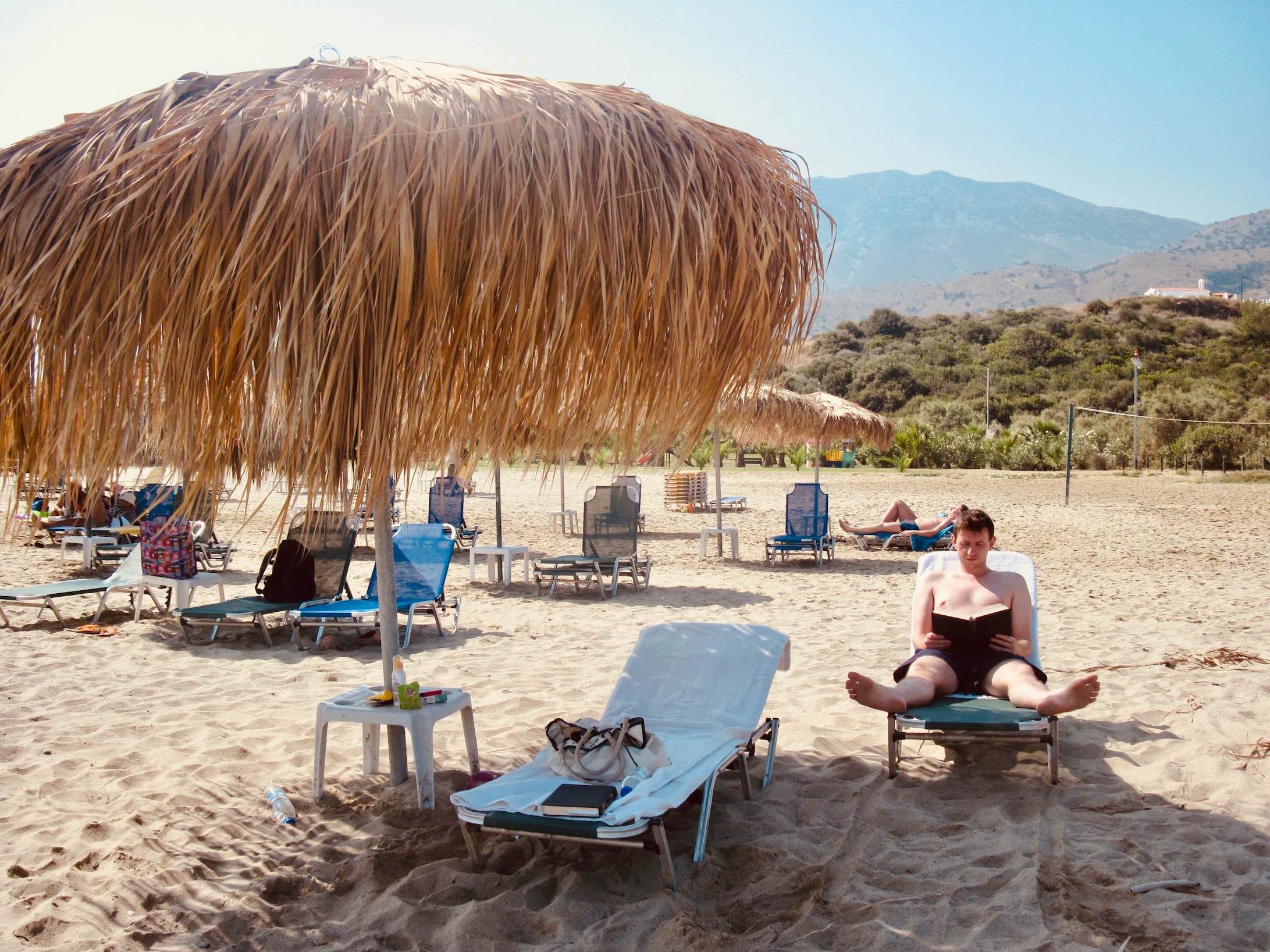 Basking in the glow of the sun… enchanted by the ebb and flow of the waves… immersed in the thrilling world of The Rolling Stones… this is how my Georgioupolis stay unfolded for the first four days.

Not a bad view.

In the evenings I would saunter to the village square, just a ten minute walk from my hotel. The route would take me past the pretty Greek Orthodox Church. Unfortunately, it was always locked up, not to mention guarded by a territorial gaggle of street cats. Online meanwhile, I found barely a trace of the church’s history. 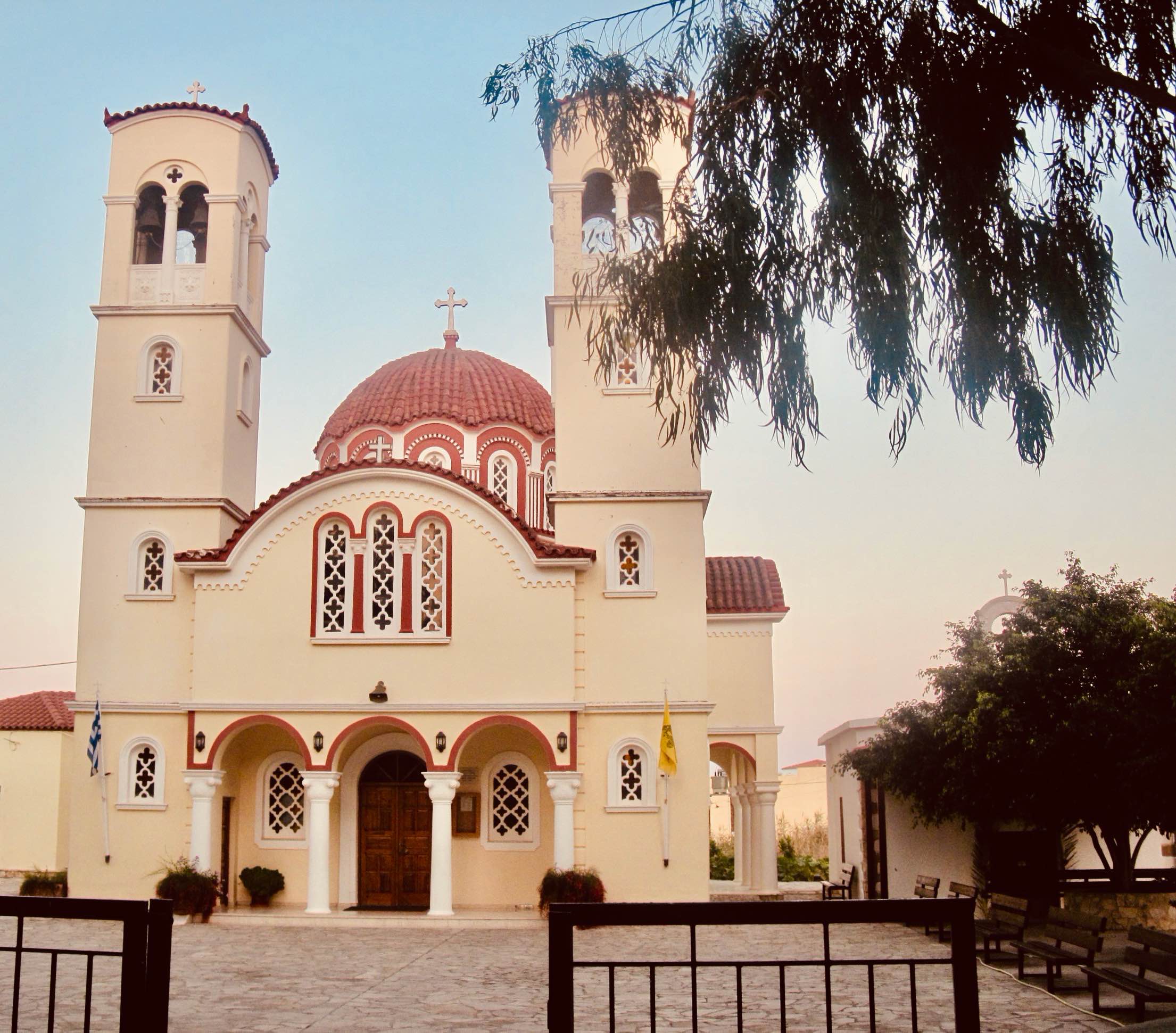 The town square itself was always delightfully low-key, home to just a few stores, a pharmacy, a bank and a cluster of cafes, bars and restaurants.

I must have visited just about every place over the course of my ten-night stay. I’d maybe have some waffles and coffee for breakfast, a Greek salad for lunch, some grilled fish or a hearty moussaka for dinner. Happily, I always found the food freshly prepared and easy on the wallet. Sure, the service could be slow, but hey, that’s very much the Georgioupolis vibe. 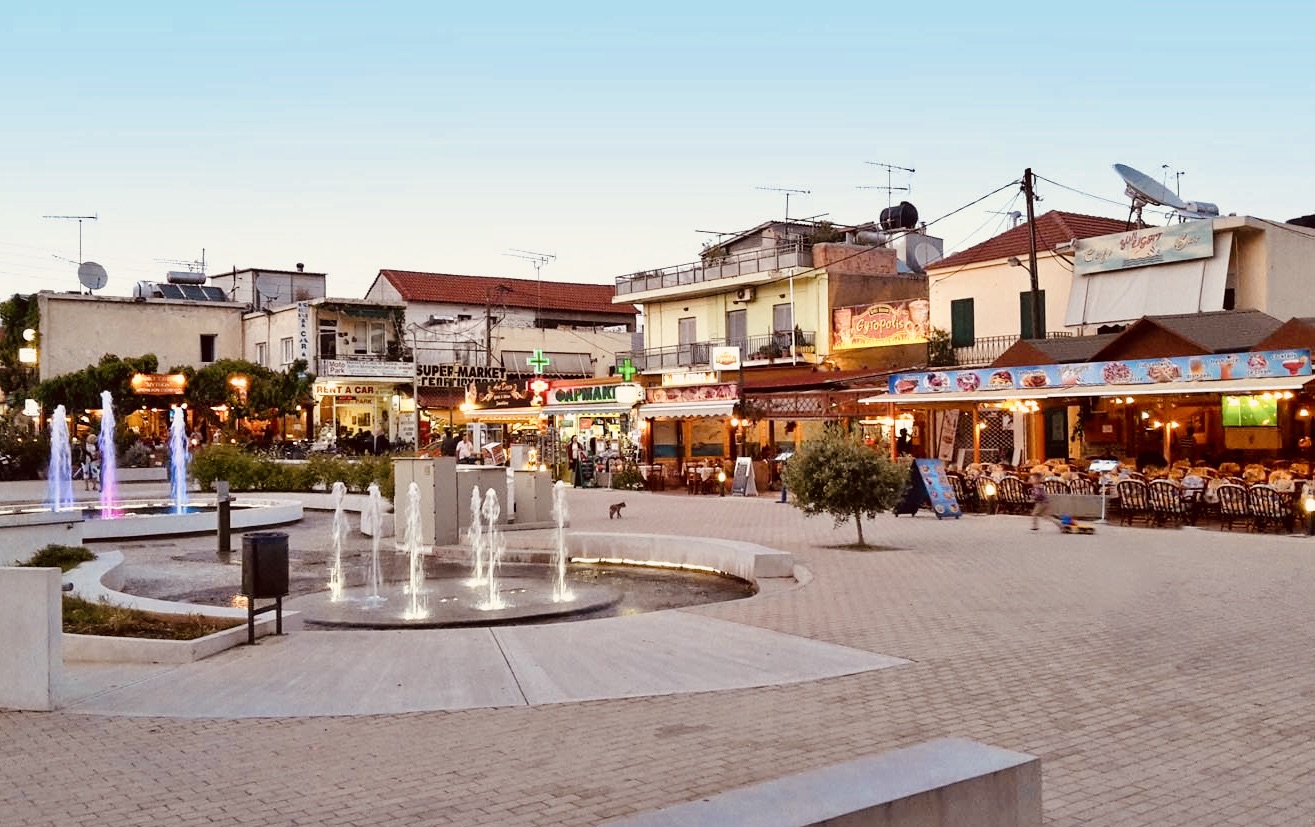 One day, with about three quarters of my book consumed, I finally got up and took a walk. All week, in between pages, I’d been gazing out to sea where a gorgeous Greek fisherman’s chapel sits nestled on a tiny, sea-kissed islet. Thus I threw on my sandals and slowly made my way towards Agios Nikolaos Church. 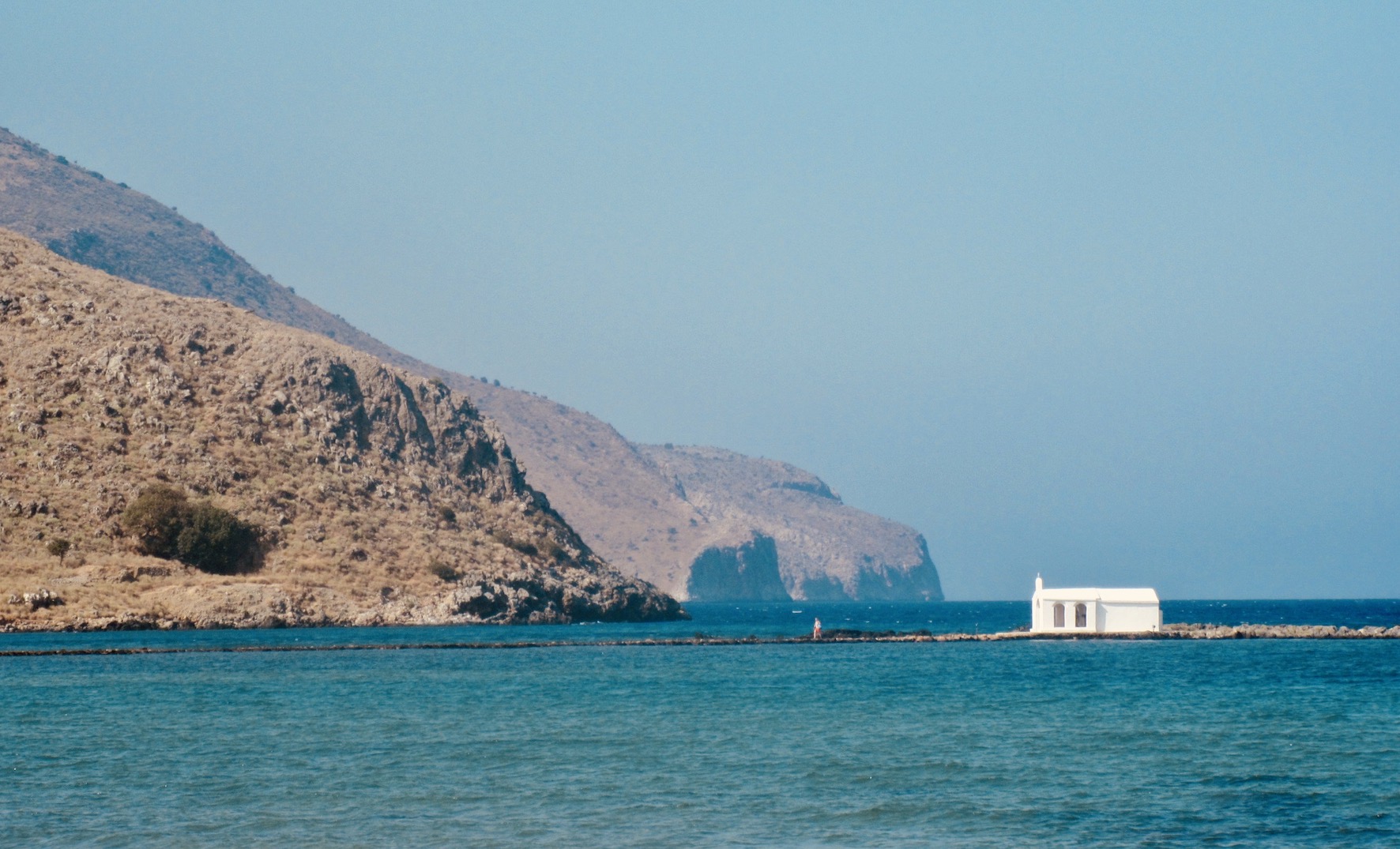 The whitewashed building, built in the mid 1930s, stands dedicated to St. Nicholas, the patron saint of sailors. That’s the same St. Nick, don’t you know, who inspired the legend of Father Christmas. And what a sight it is, a lovely little structure seemingly floating in The Aegean Sea! 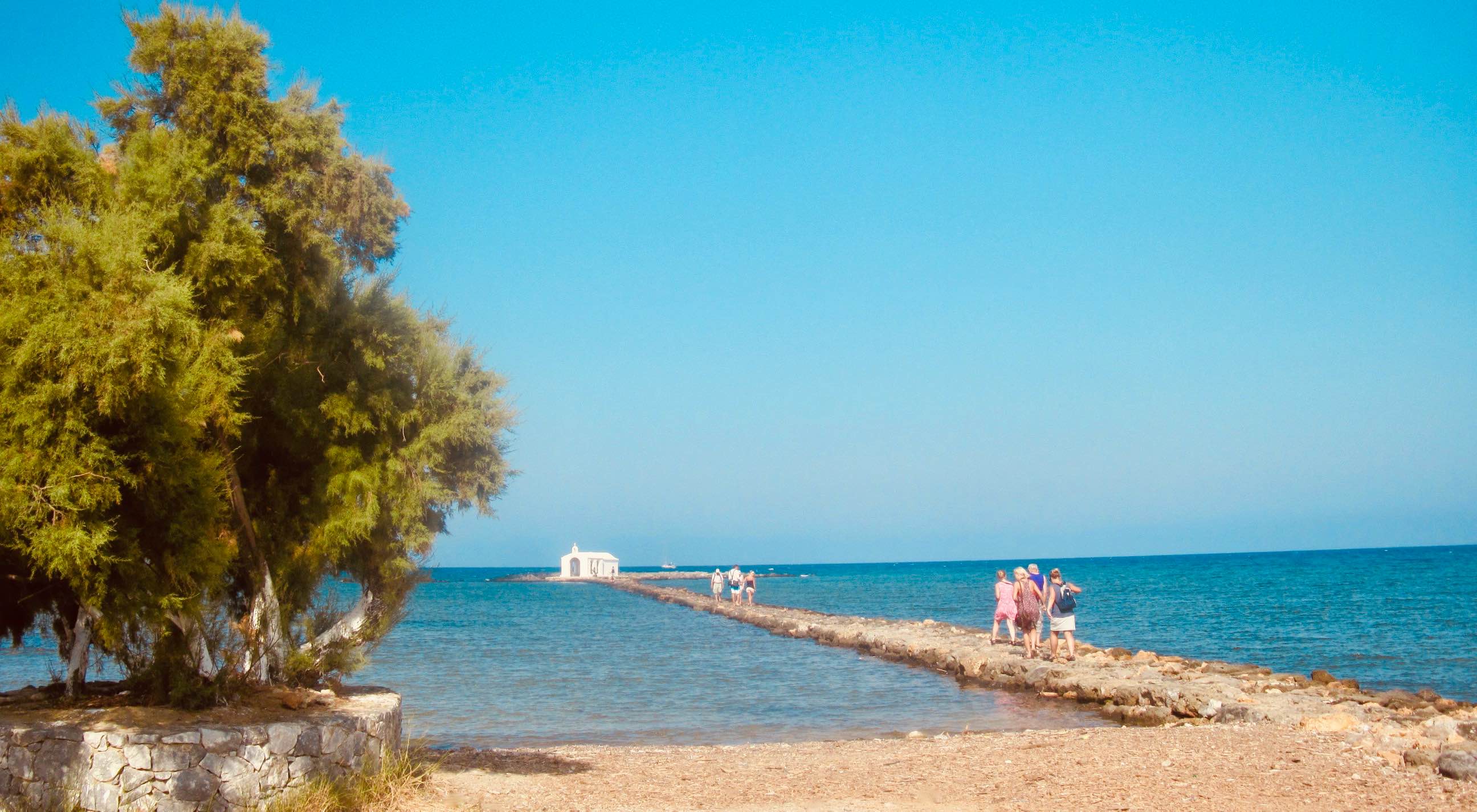 To access the church, one needs to negotiate a long, rocky walkway from the beach. It’s much tougher than it looks; you definitely need a good sense of balance. Looking back, I wish I’d changed from my sandals into trainers, as I nearly slipped on numerous occasions. Still, it was fun to pause along the way and watch crabs scurrying around between the various rock pools. 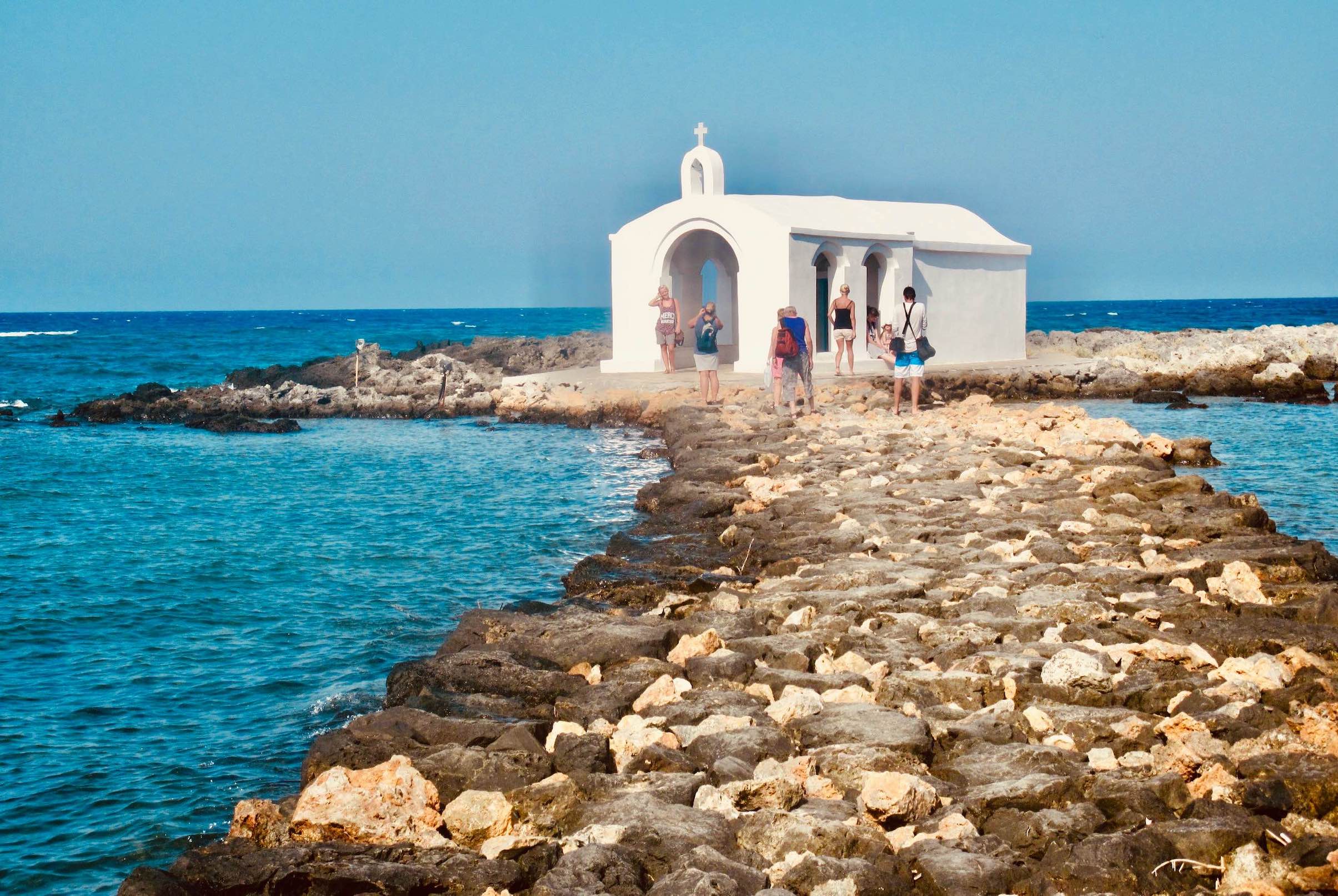 Luckily it was well worth the effort. This, many say, is one of the iconic symbols of Crete. The kind of place that sends Instagram into overdrive. And yet, inside, it is surprisingly modest… bare even. Rather, its appeal lies in its location and sea views. 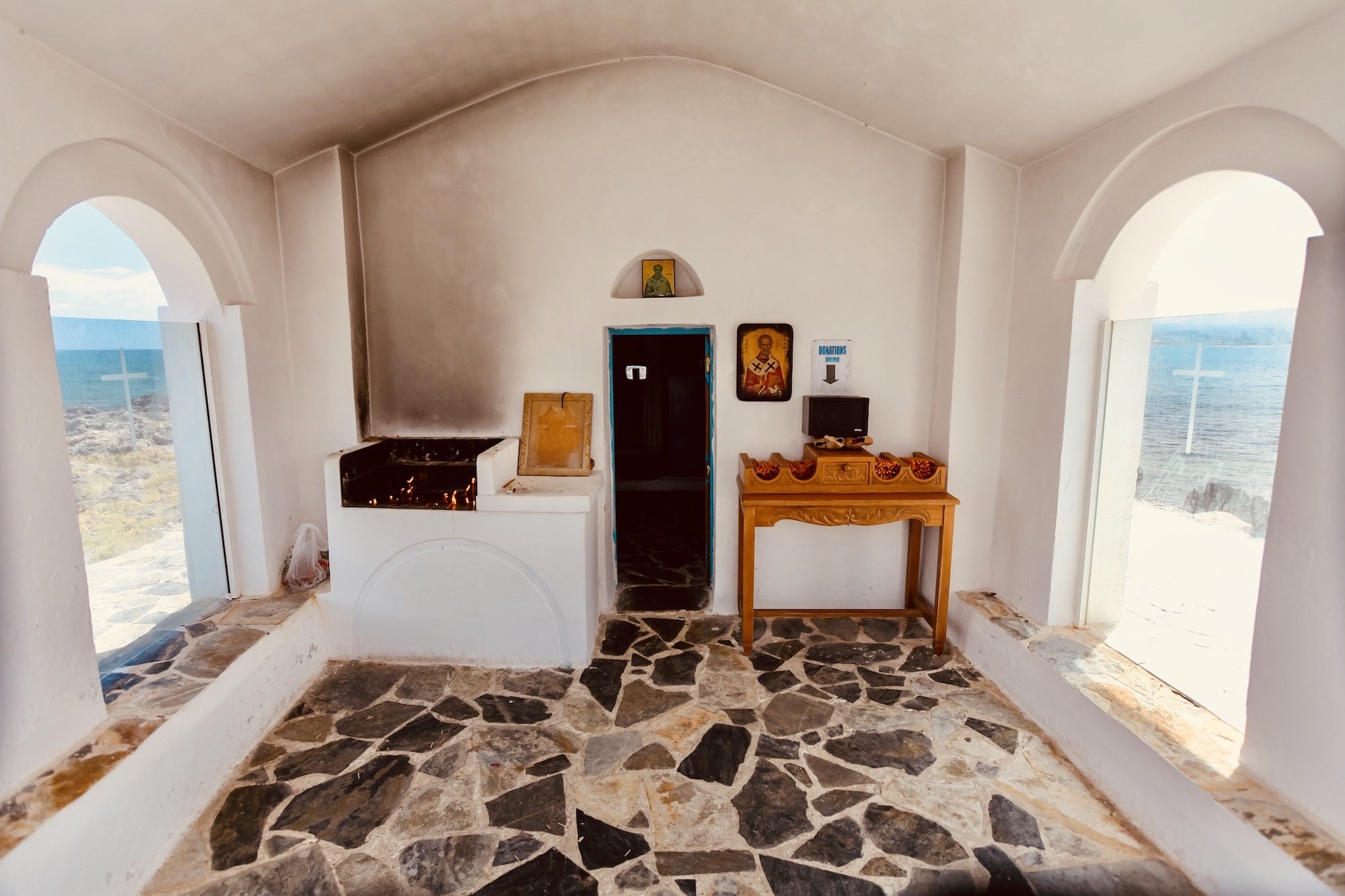 Having lit a candle and left a donation, I spent some time gazing out at sea. Then turned my attention back to Georgioupolis, which appeared much further away than I’d anticipated. Indeed, I hadn’t realised just how far out the church actually is! 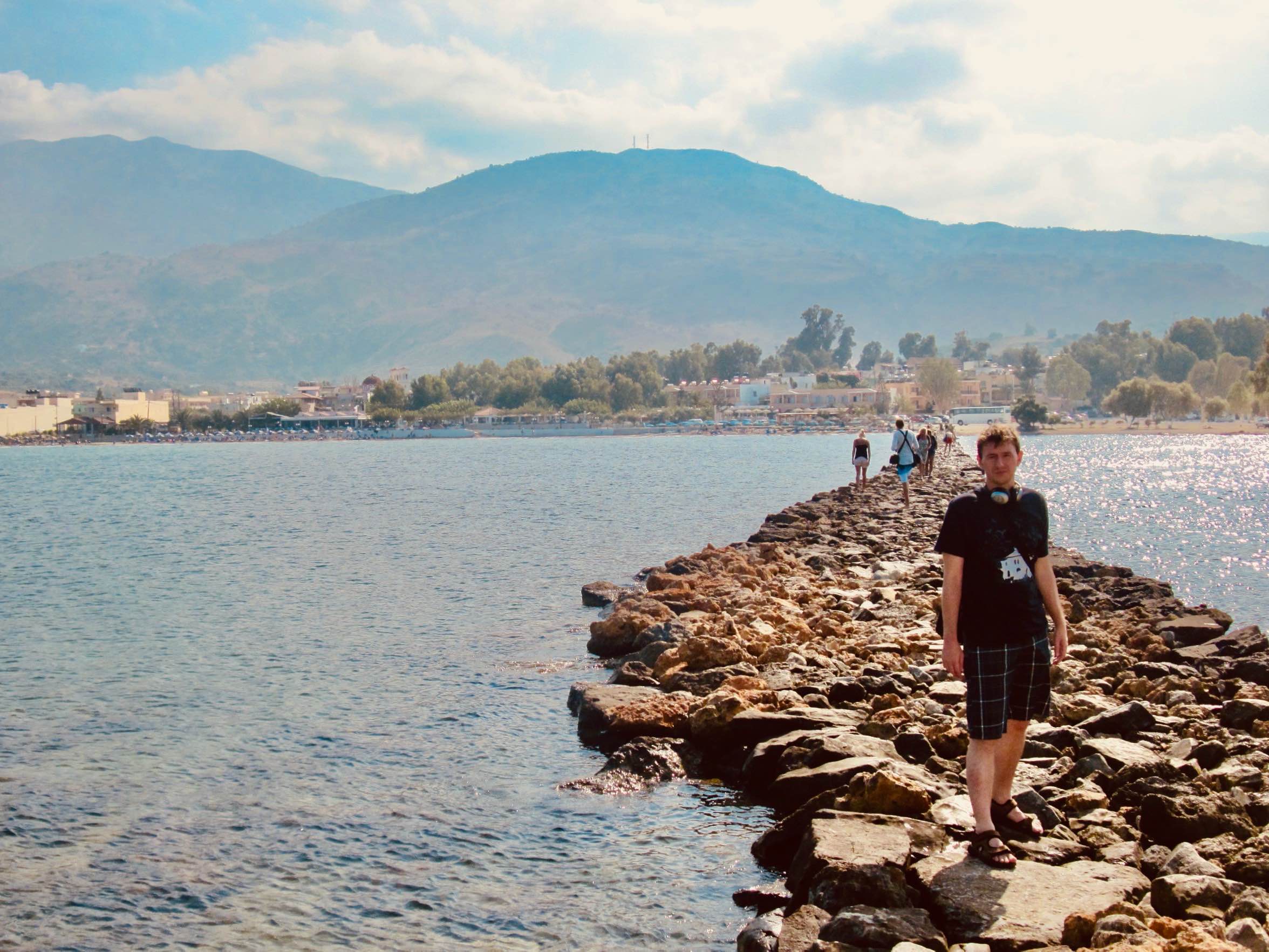 The next day I was on the beach, finishing off my book, when I heard a German couple talking about a nearby lake. Lake Kournas, they revealed, is Crete’s only freshwater lake. “So beautiful!” tutted the lady, applying sunscreen, as if the lake had committed some kind of crime.

Quite spontaneously, I decided to go and check the lake out. Initially, I’d planned to walk, but that would have been a 90-minute ordeal under the scorching son. In the end, a taxi made short work of the trip, the driver dropping me off outside a row of taverns in the hilltop village of Kournas. 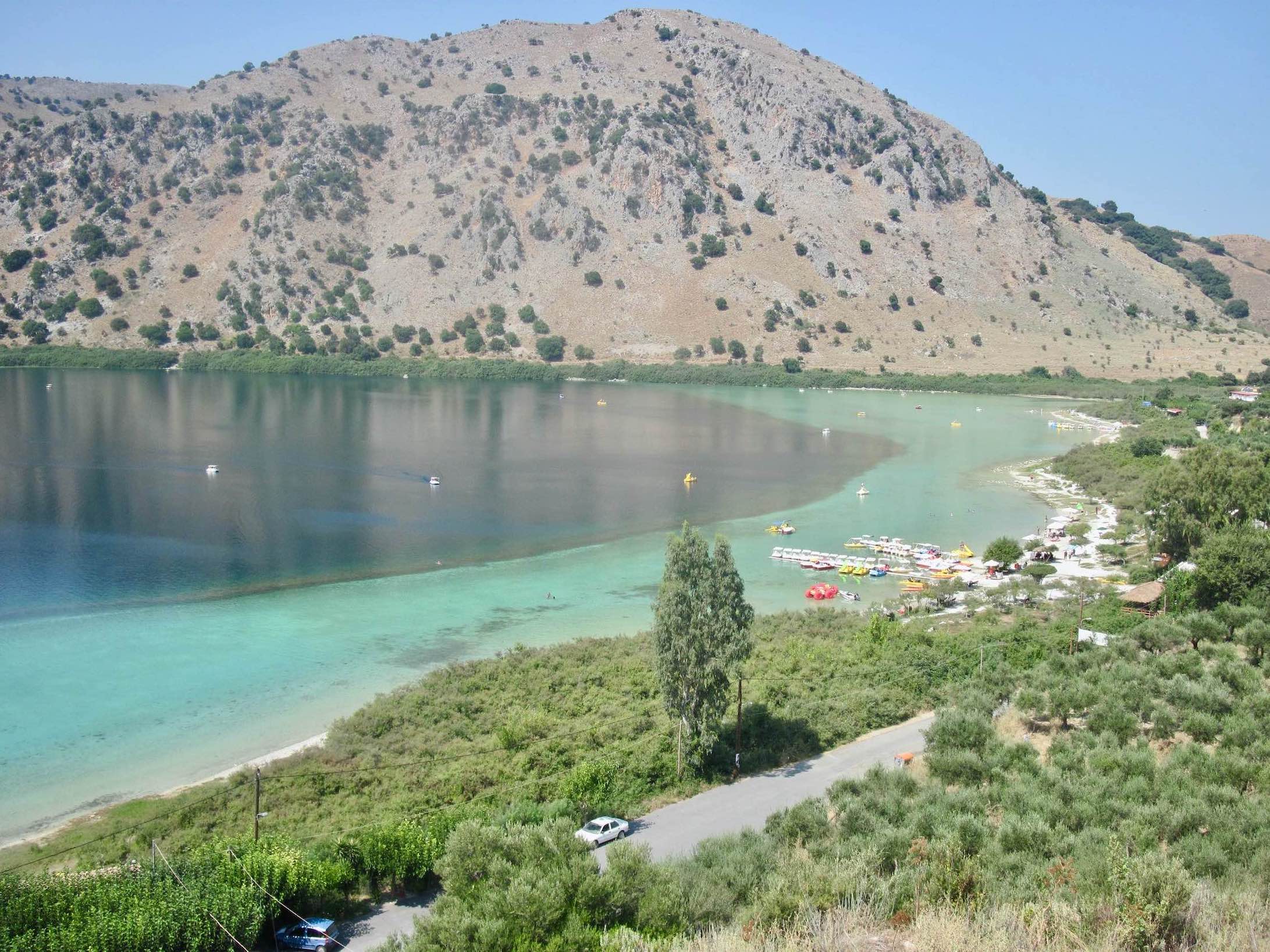 So I ducked inside one of the taverns and ordered an ice-cold beer, delivered to my balcony table. The view out over the lake was splendorous, so much so that I felt inspired to take a walk down to the lake. 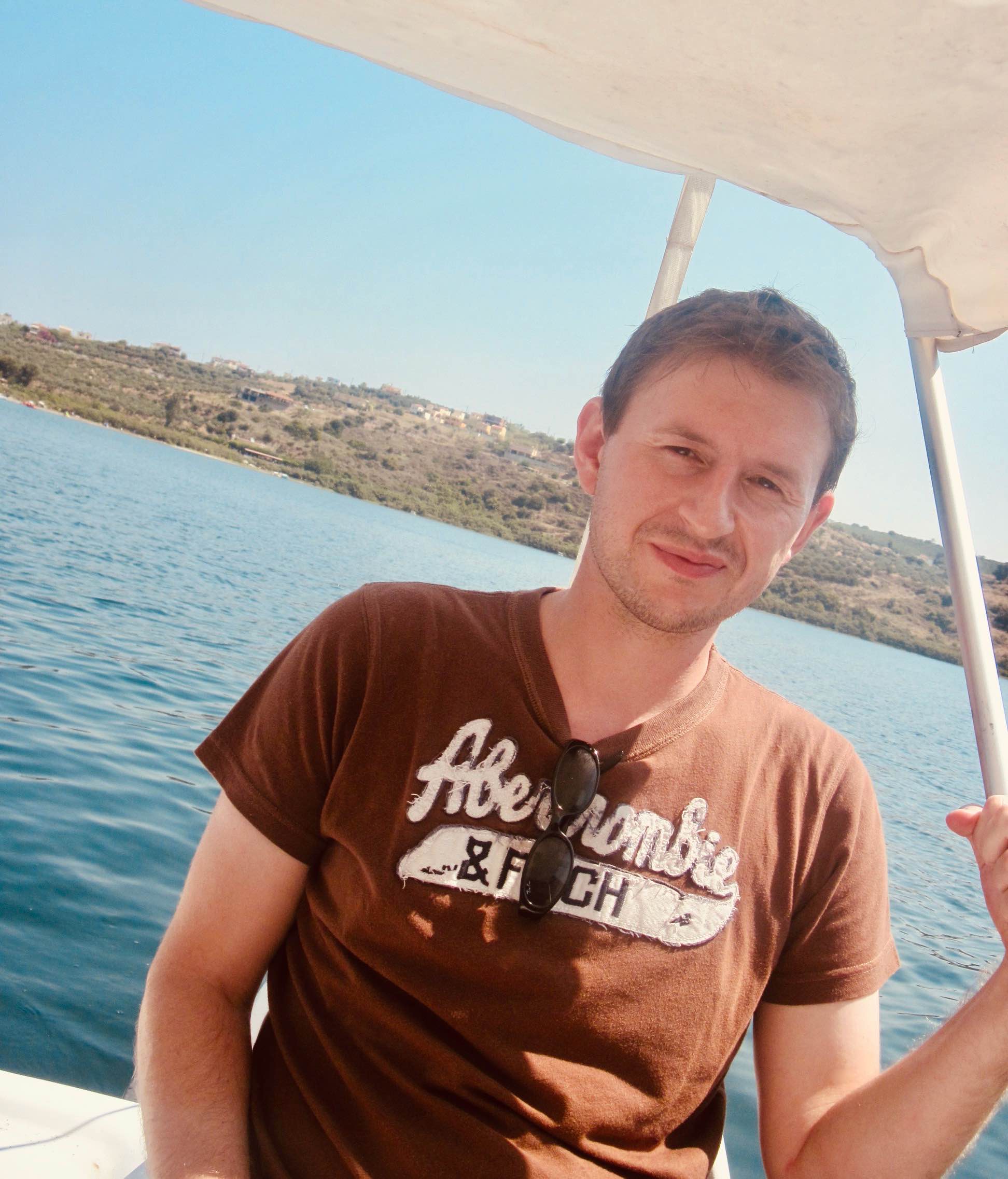 Down by the water’s edge, I came across a small pedal boat station. Prices were negligible, so I jumped in one and took it for a spin. Much like Georgioupolis, Kournas was free from crowds, with just me and a few other boats out on the lake. Hence it was a lovely, quiet, carefree hour doing a loop of the lake and admiring the surrounding hills. 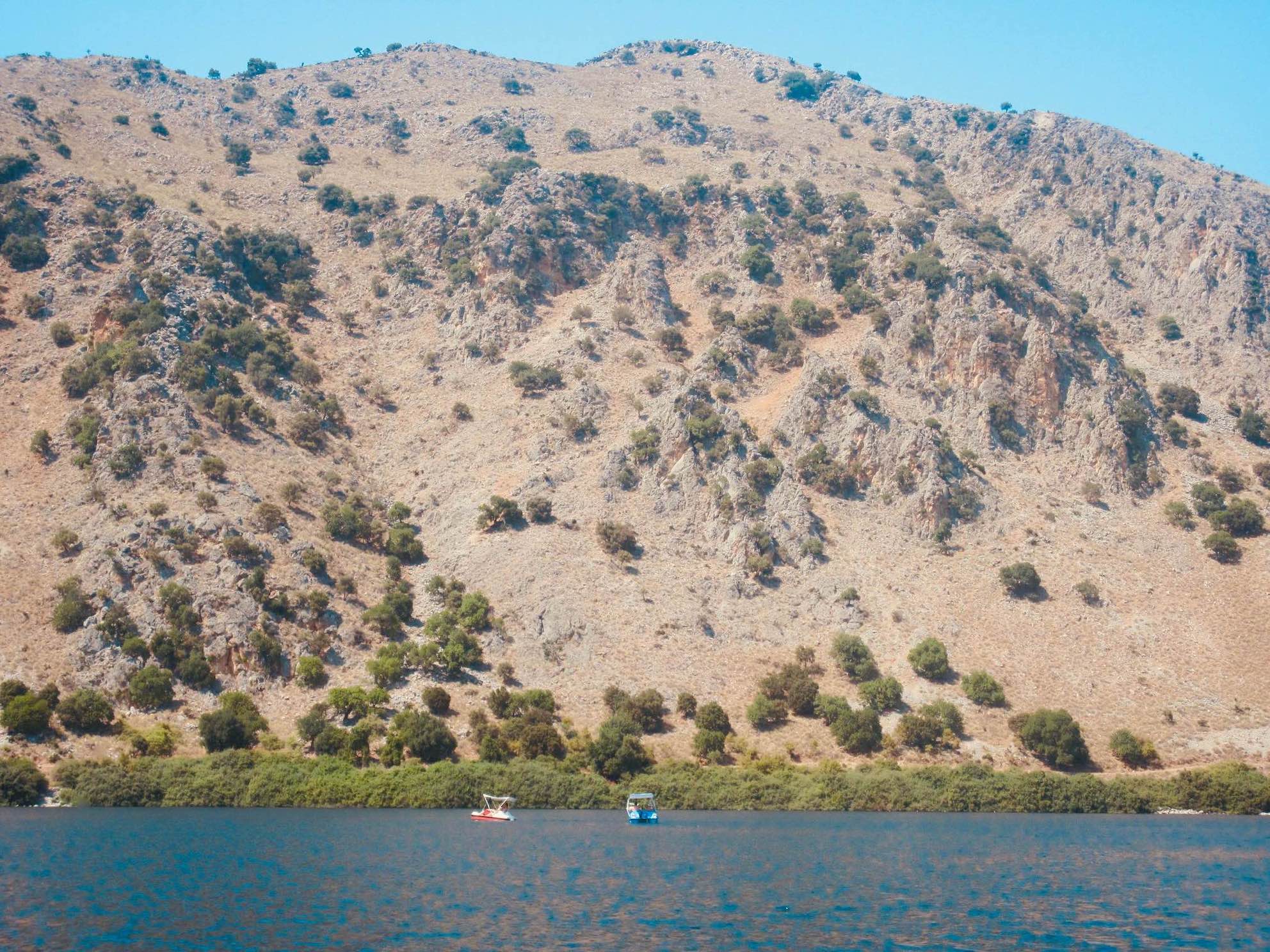 By the time my final day rolled around I had, at long last, finished my book. Feeling energised, I decided to jump on a bus and head out to the nearby city of Rethymno. Home to around 30.000 inhabitants, the “city” has some fantastic history that dates back to the Bronze Age. Indeed this is where the ancient Minoan civilisation developed port trade and minted their own coins. 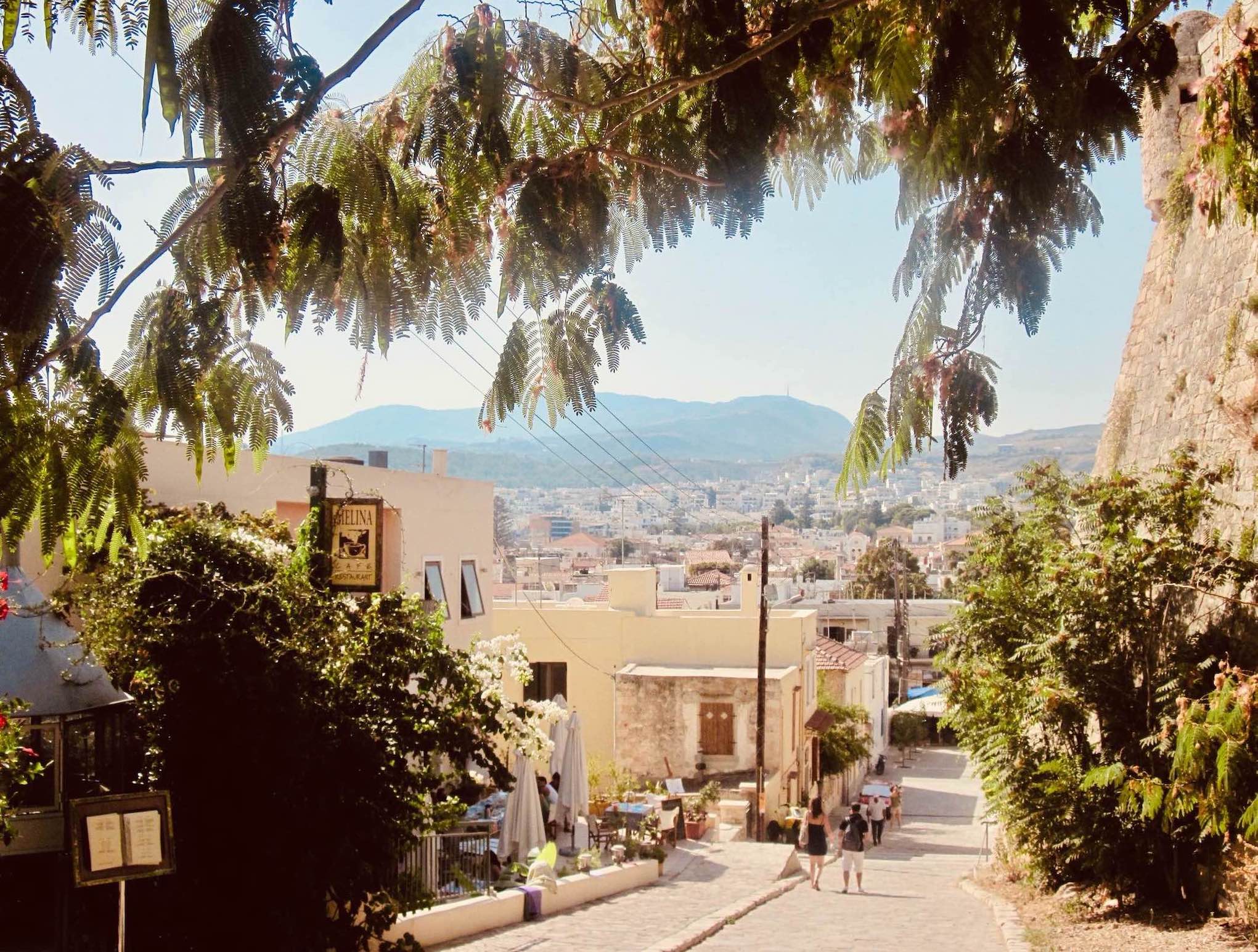 The Cretan city of Rethymno.

On arrival I was taken aback by just how much of a ghost town Rethymno was. It was late morning and I was strolling through the handsome, Venetian-era old town.

On one pedestrianised street, in between the flower-laden balconies of several canary yellow houses, I stopped for coffee and juice at a cafe. And there I remained for an hour, just myself, the cafe owner and this groovy old local guy who felt no shame in staring at me the entire time. 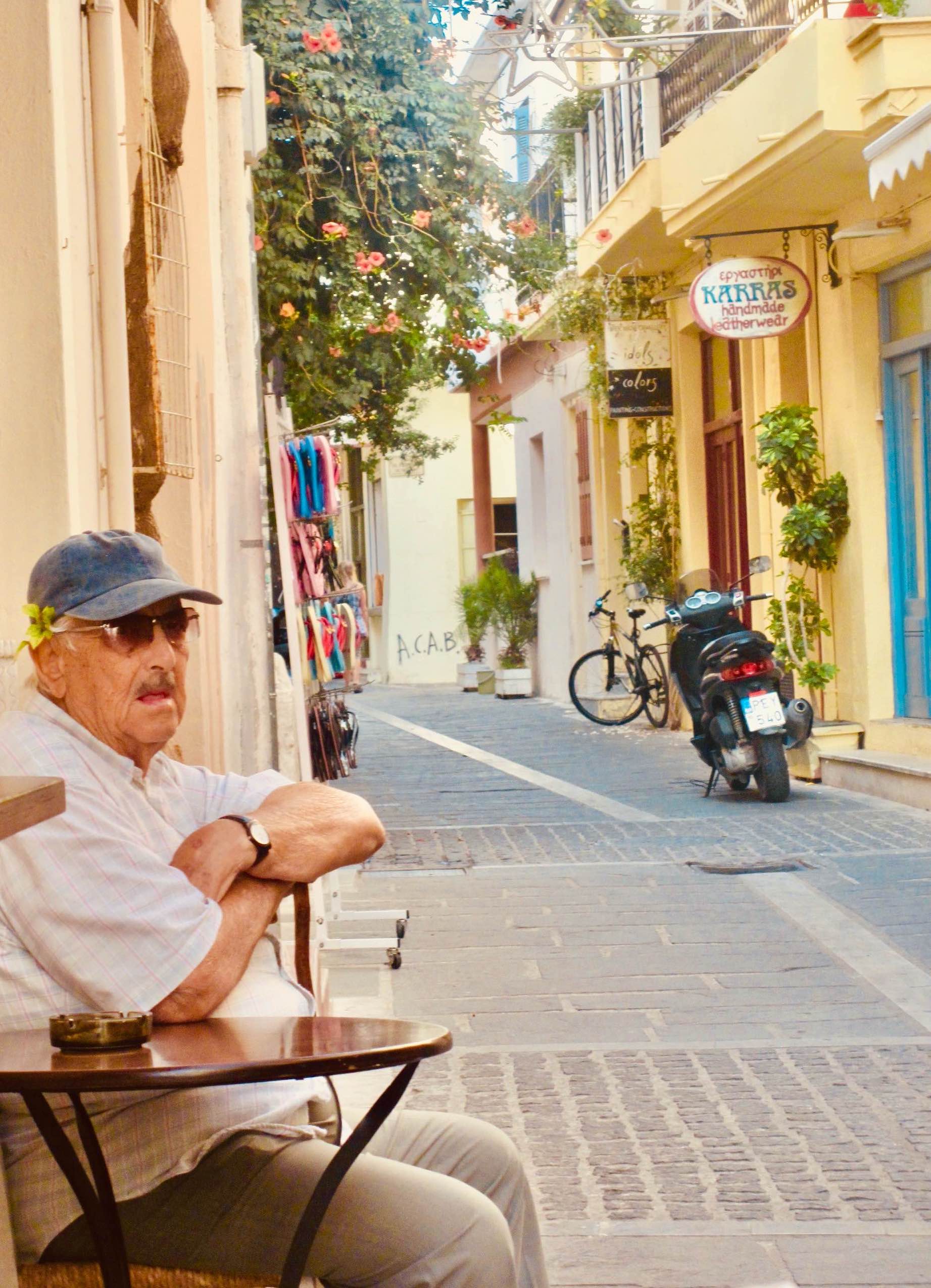 Despite the intense heat, I made sure to drag myself up the hill (Paleokastro) for a visit to Rethymno Fortress. Built by the Venetians in the 1570s, those scoundrels the Ottomans later captured the place in 1646. Over the centuries it became a lavish citadel until most of the place got destroyed during World War II. 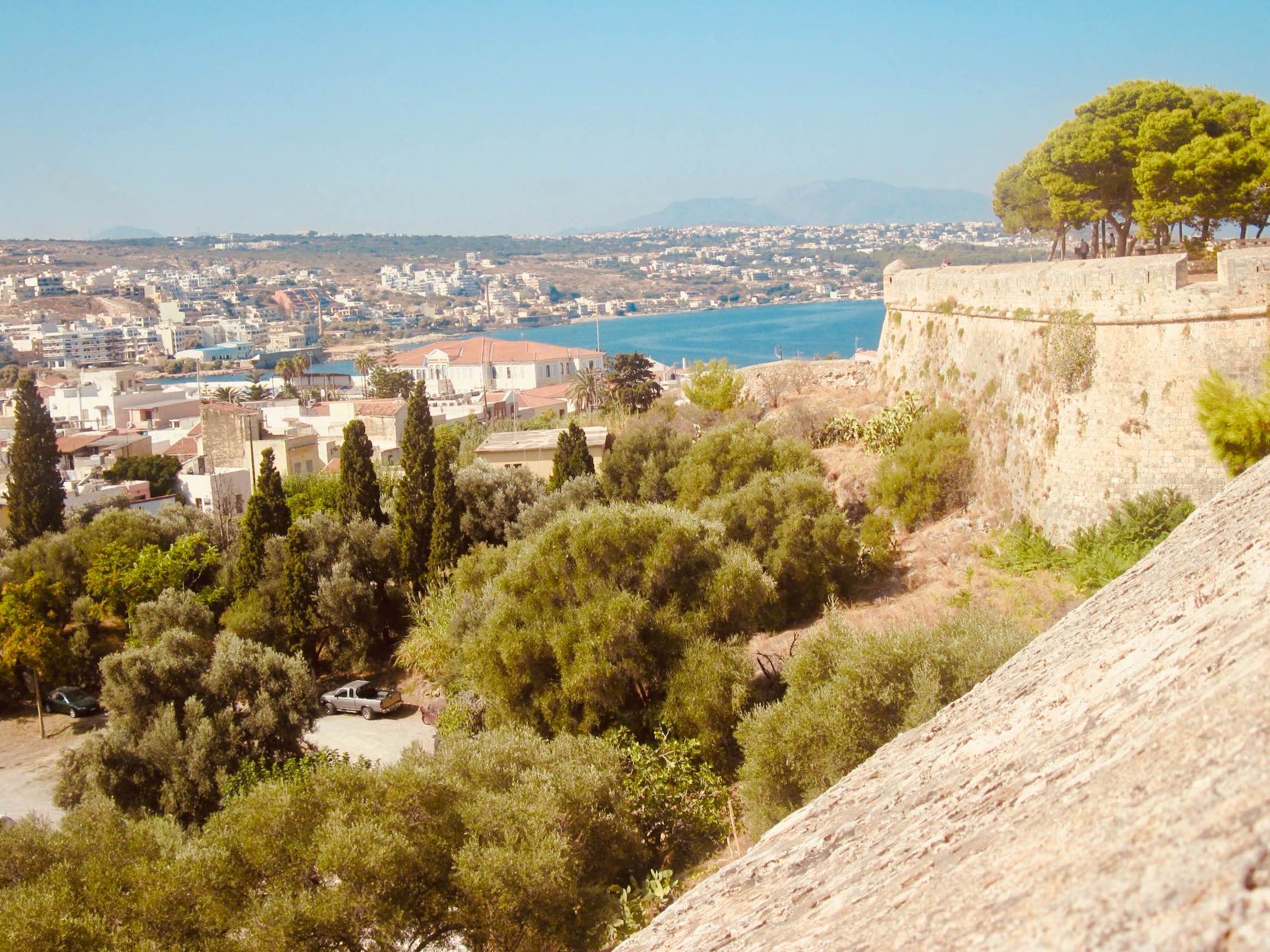 In truth, there wasn’t much to see among the ruins of the fortress. There is a small archaeological museum onsite but… yes… it was closed that morning. Nevertheless, the fortress’ lofty position makes for some fantastic views over the town and, of course, the Sea of Crete. 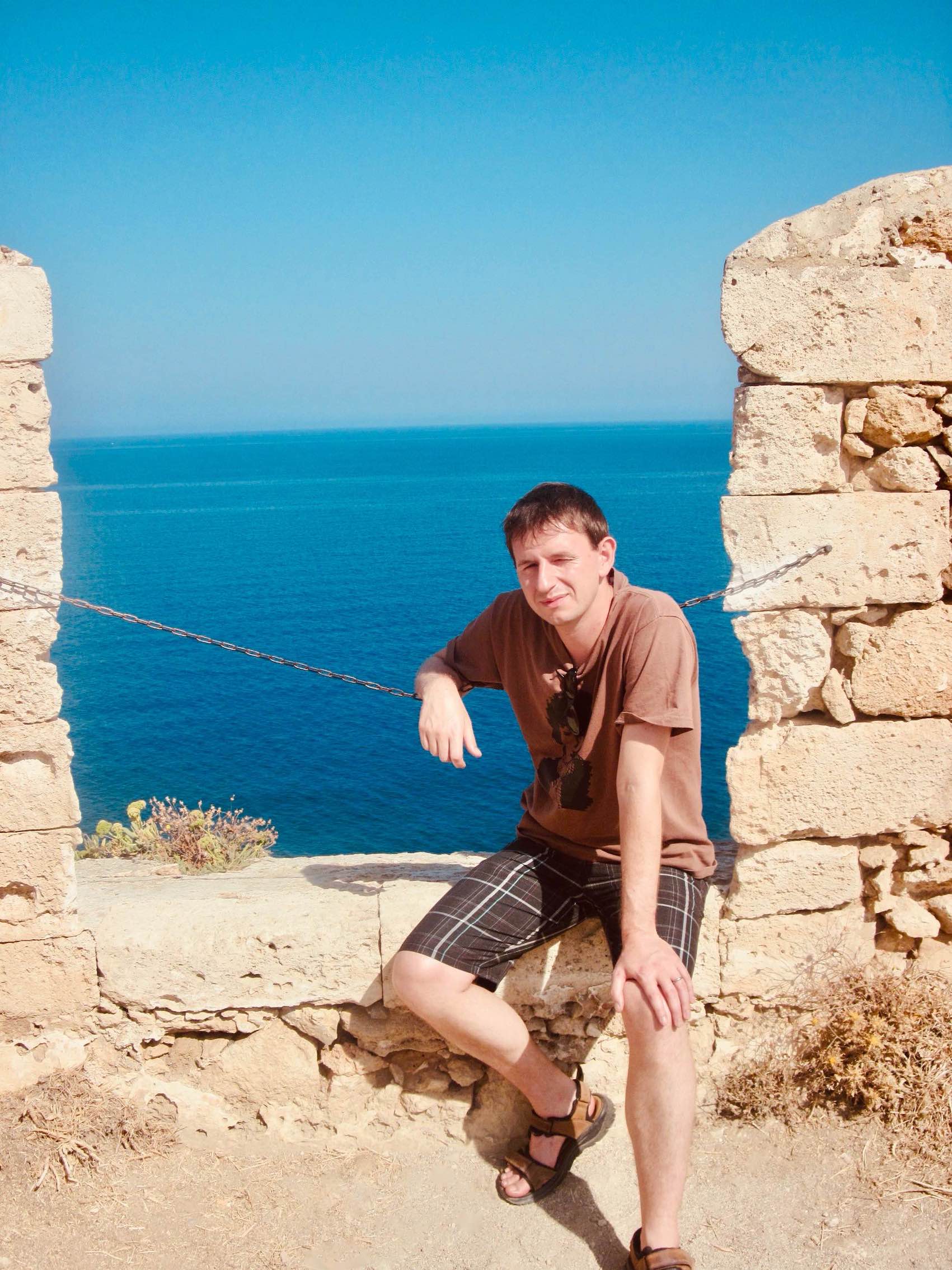 Part of me wanted to launch myself from this tower viewpoint into the perfectly unspoilt deep blue water. Somehow, I resisted the temptation. 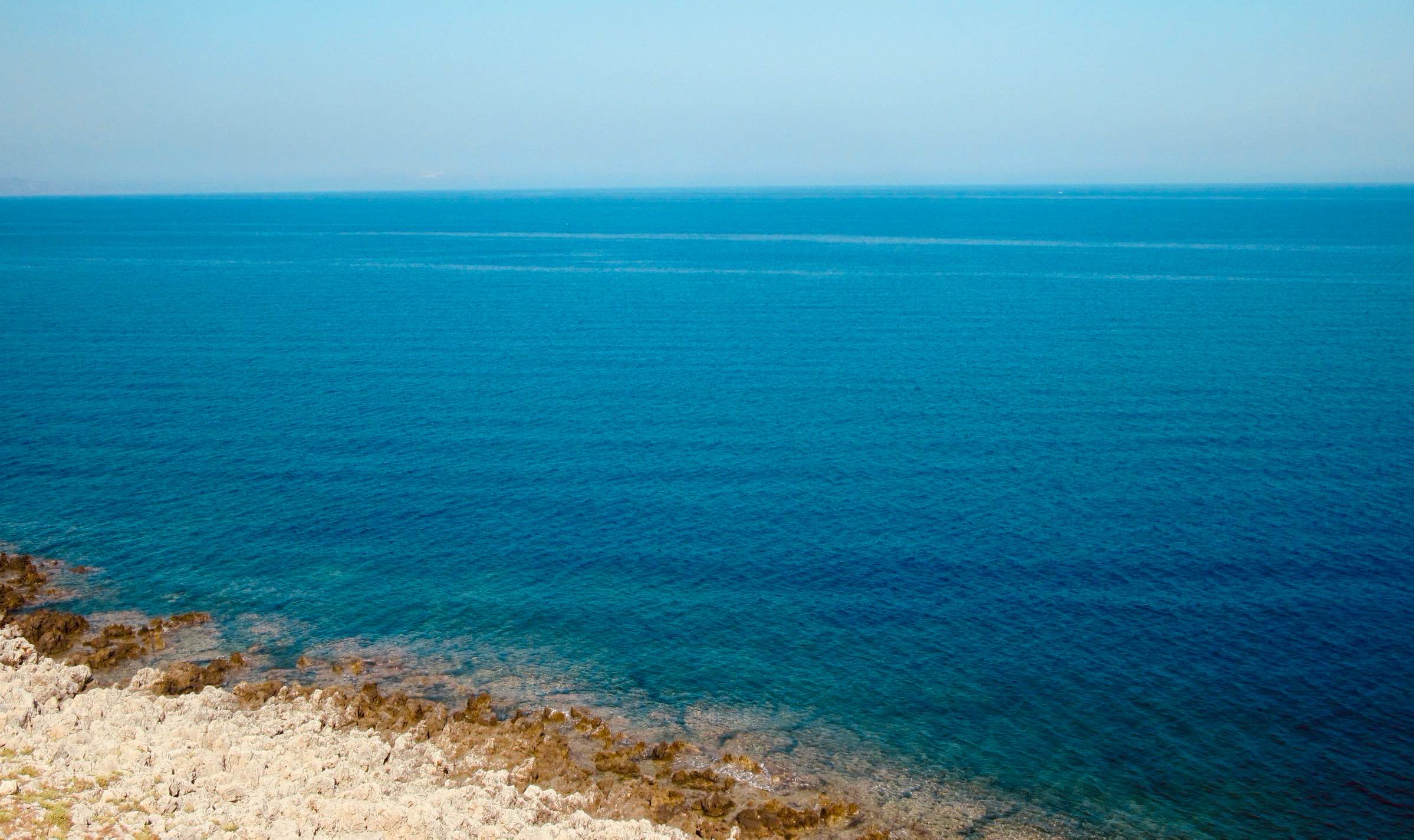 That last evening in Georgioupolis the weather turned, quite dramatically. Suddenly, as I was packing up my suitcase, the sound of fierce thunder rattled the walls and drew me out to the balcony. The sky was amazing, a sinister cauldron of blue, white and grey that soon bled into shades of black. 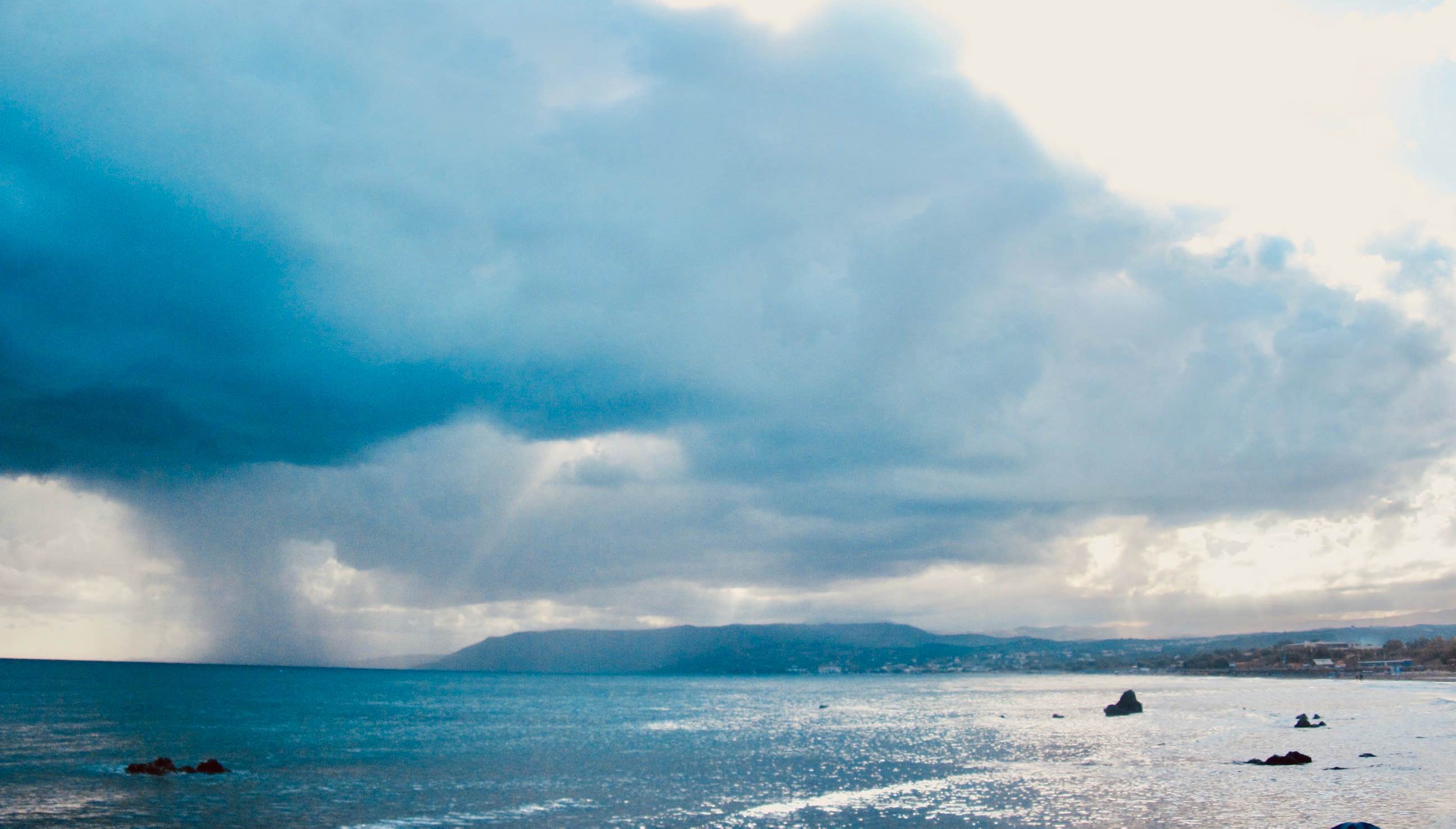 Crete had given me exactly what I had come for, and plenty of extra delights to boot. In fact, I enjoyed the experience so much I decided to return a year later for another ten days in a new location. The full details of that trip, dear readers, come out in my next post. 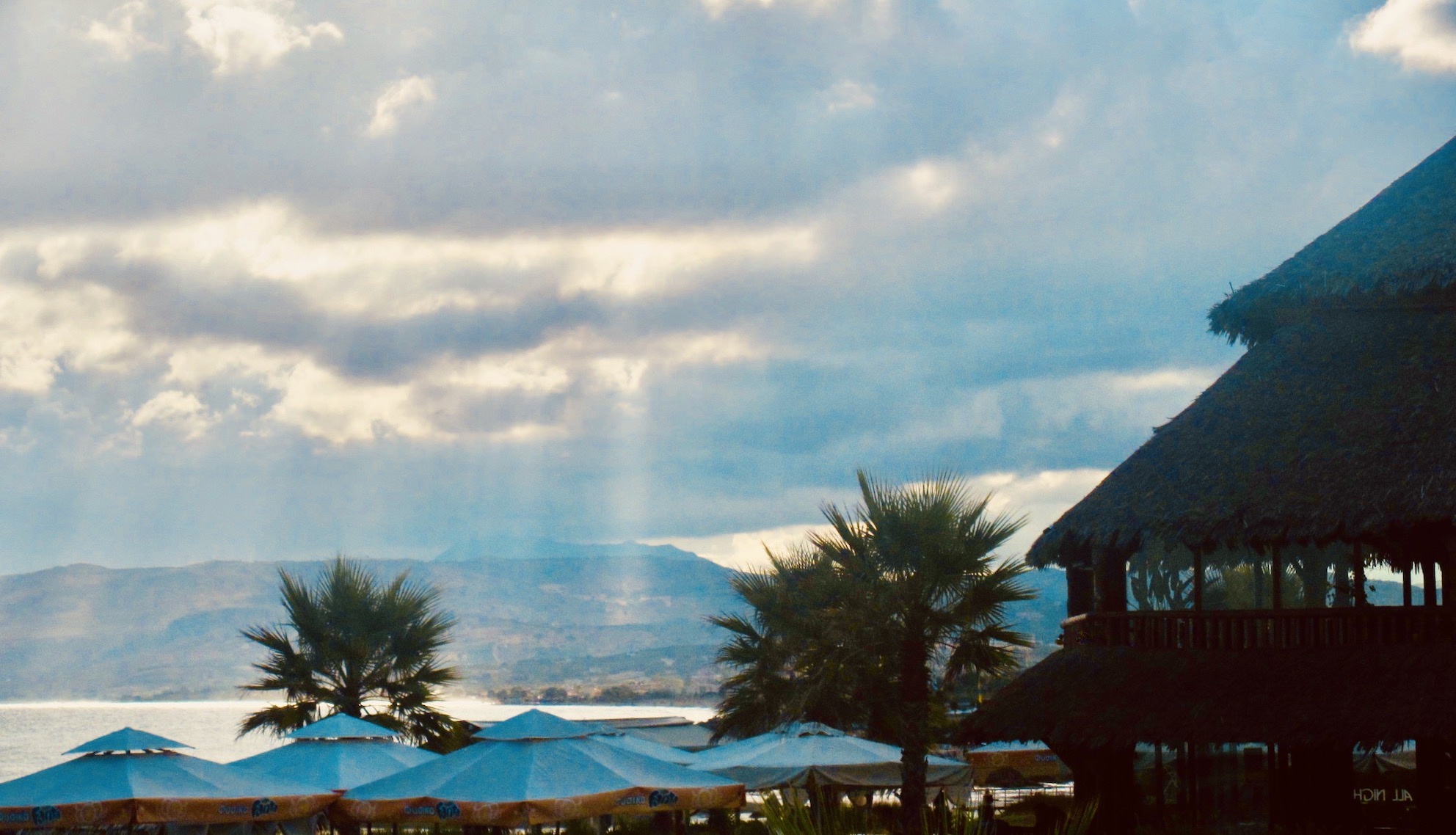