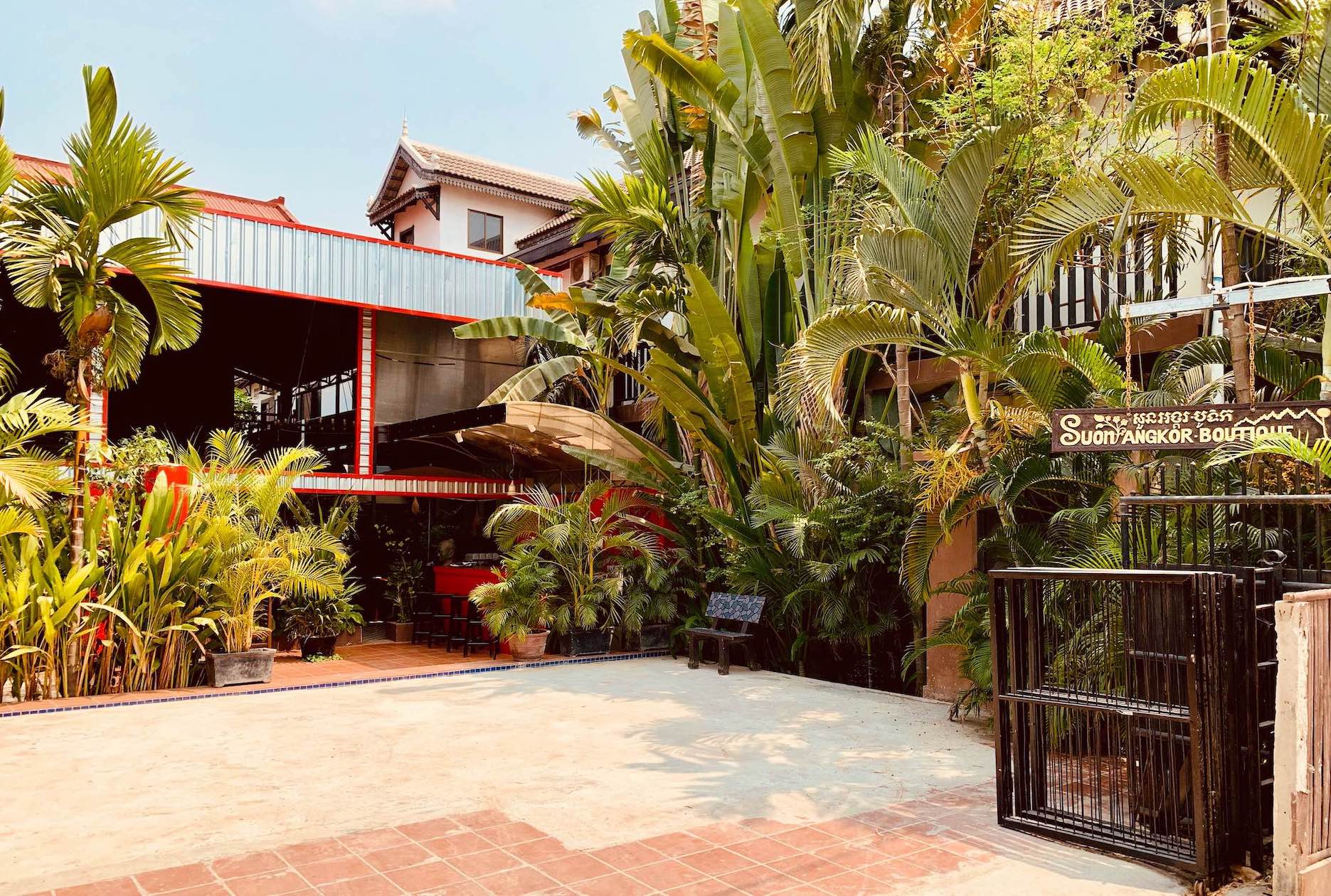 I’ll never forget our crazy months living in Siem Reap at the height of the COVID-19 outbreak. After a few weeks in a studio room and a couple of months based at The Foster Apartments, Sladja and I found ourselves relocating to a so-called “boutique hotel” for a two-week trial stay.

They had a generator, you see, which could deal with the city’s regular power cuts and allow me to teach online smoothly. Having gone to scout the place out one afternoon, we’d been charmed by the Khmer lady at reception. She was an unfathomably cheerful woman who wooed us with promises of luxury living, smooth WIFI, an onsite restaurant and a cool, refreshing pool. 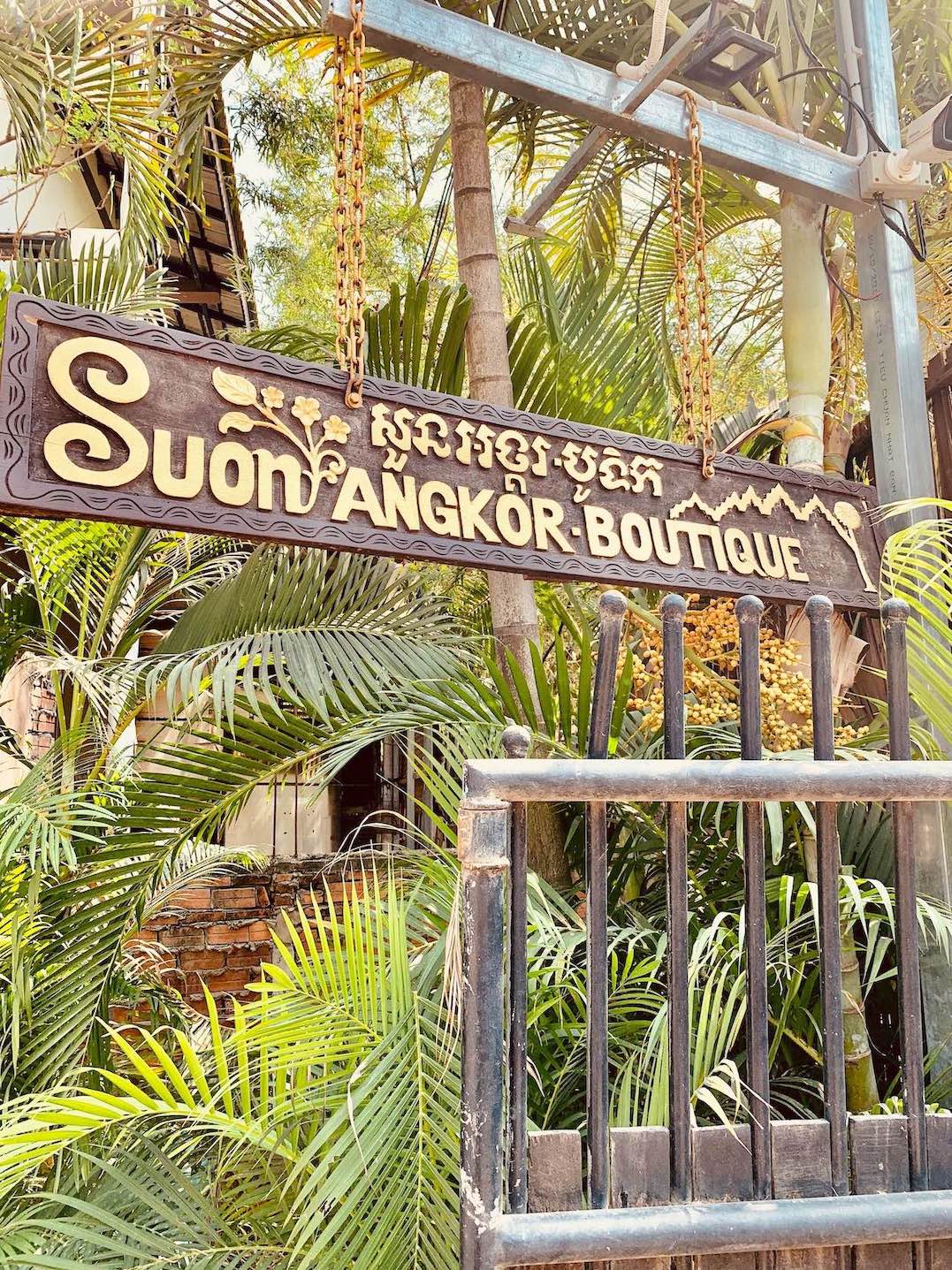 And so it was that we took a punt on Suon Angkor Boutique Hotel. I can still recall the uncertainty that inhabited us both that roasting hot March afternoon as we loaded our bags onto a tuk tuk for the ten minute drive across town to our new lodgings. Ms. Cheerful was positively bursting with beans when we arrived at reception. “Welcome hooooooome!” she trilled, somewhat comically.

As first impressions go, Suon Angkor delivered handsomely. A staff member was on hand to deal with our luggage and check-in was a piece of cake. Ms. Cheerful had even laid on a pair of icy juices and a bowl of sugared nuts. Mm, don’t mind if I do. Handing us our keys, our excitable hostess was keen to assure us that “If there’s anything at all I can do for you… anything…. please tell me”. 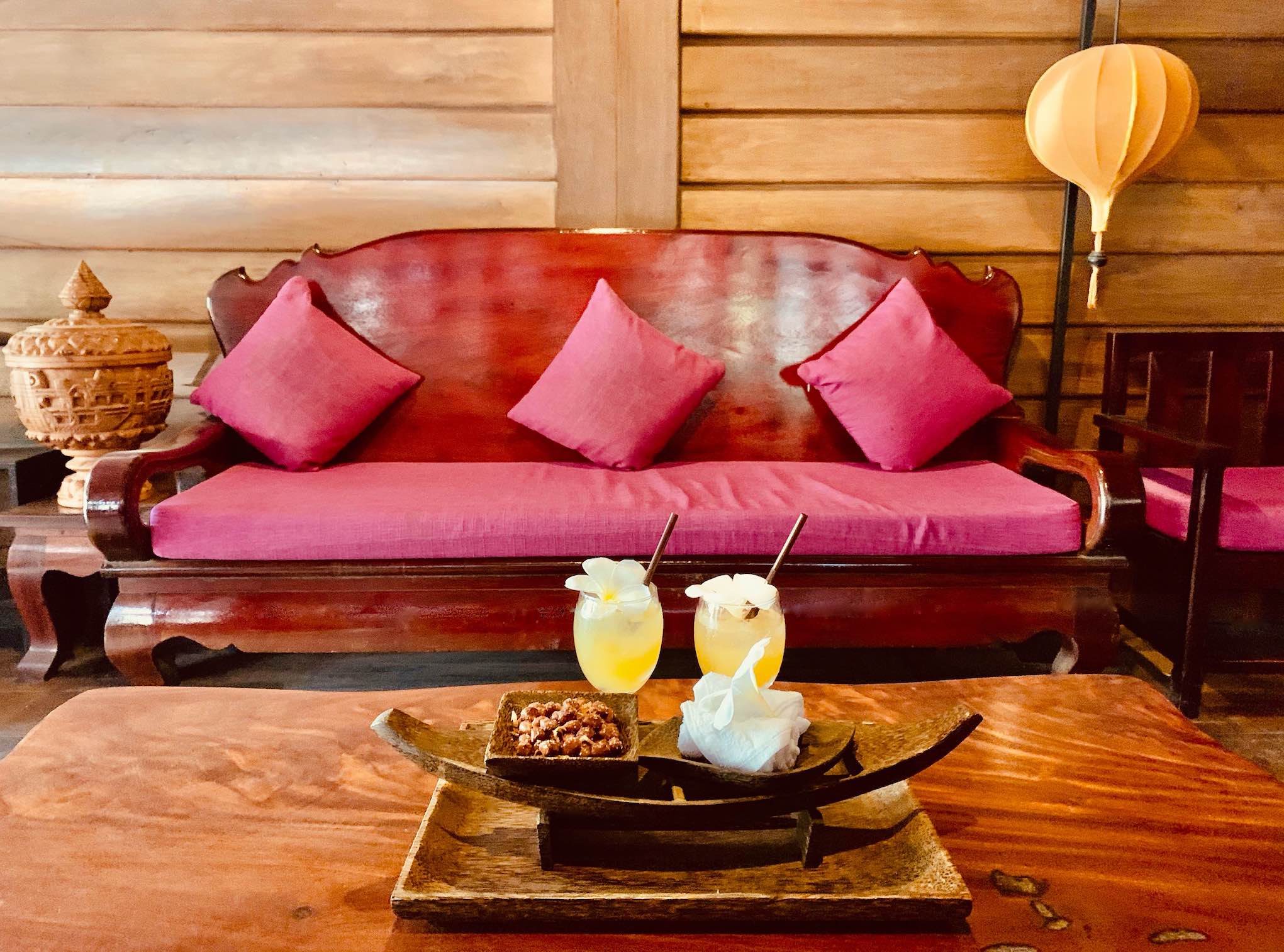 Unfortunately, this surface charm rapidly fizzled away as we settled into our double room. Don’t get me wrong, the space was nice enough. It was clean, decorated with traditional Khmer wooden furniture and had a giant bed that had been beautifully made up. 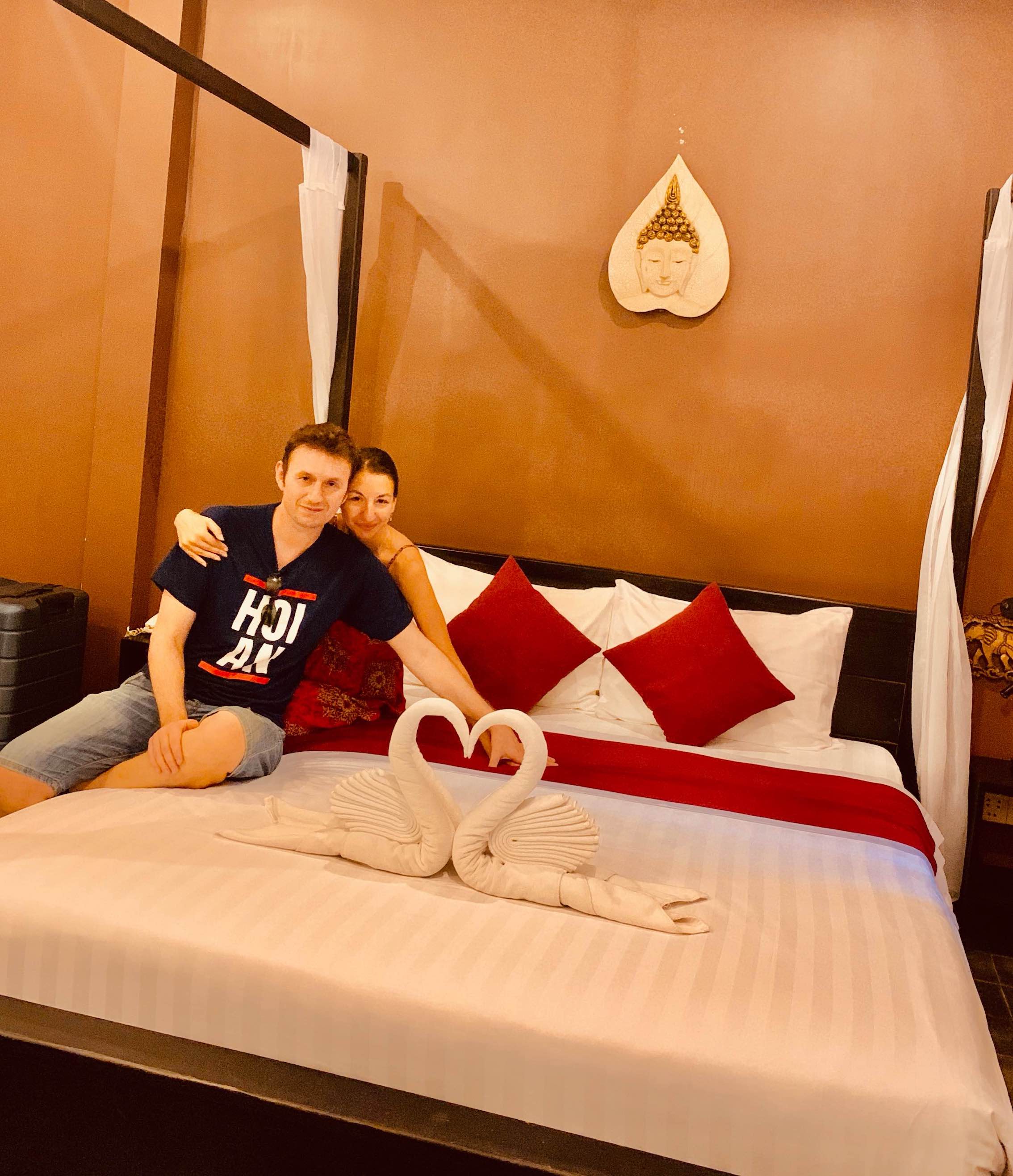 Before we checked the WIFI.

But it didn’t take long to see that the WIFI was absolute rubbish. This was particularly disappointing, as I had spent so much time hammering home the importance of WIFI with the cheerful one prior to handing over a wedge of our hard earned dollars. “I have classes to teach”, I explained. We had a blog to run too, of course, not to mention the small matter of keeping on top of the pandemic news and figuring out what the hell we were going to do.

Hence I trudged back to reception and explained myself all over again. This is when Ms Cheerfully Dishonest admitted that the side of the hotel we’d been put in was in fact far from the router and had shaky coverage. Grrr. Within minutes we were off again, our good selves and all our stuff moved to a room by reception near the router. 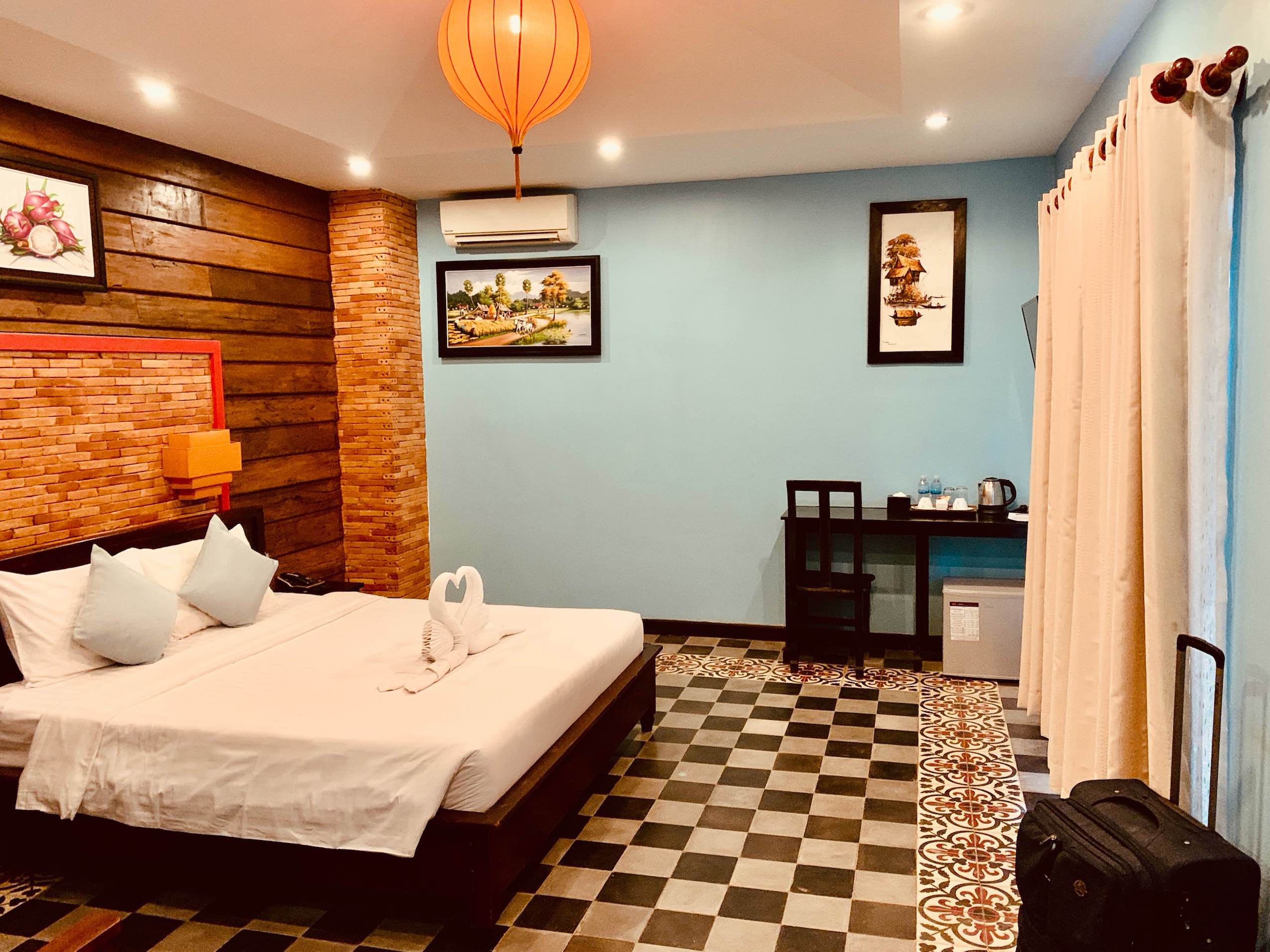 At first glance the new room was much better. Bigger, brighter and with a more homely design. However, over the next few days we realised how run down the place actually was. Certainly not boutique by any stretch of the imagination. Especially when we pulled back the covers on our bed that evening to find bloodstains all over the sheets! With little more than a mumbled apology, someone came to replace them. 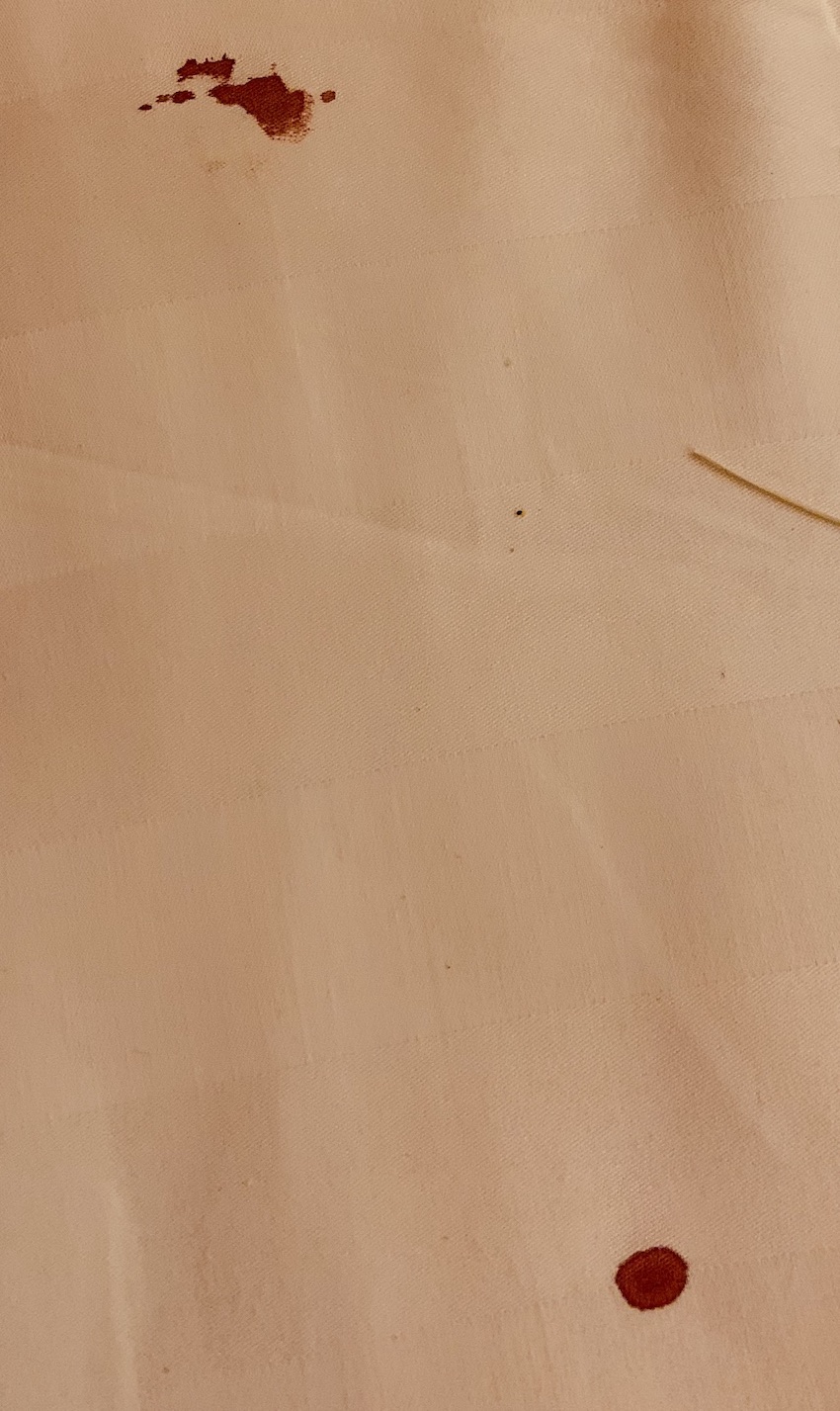 Elsewhere, the walls were peeling and home to a variety of insect life. Every piece of furniture was prone to falling apart at the merest touch, while in the bathroom there were cracked floorboards with sharp splinters sticking up. Indeed it was quite a dance to carefully pick a safe passage to the toilet seat. I still remember The Queen of Cheerfulness’ reaction when we told her: “Ooooh yes, you should be careful!” 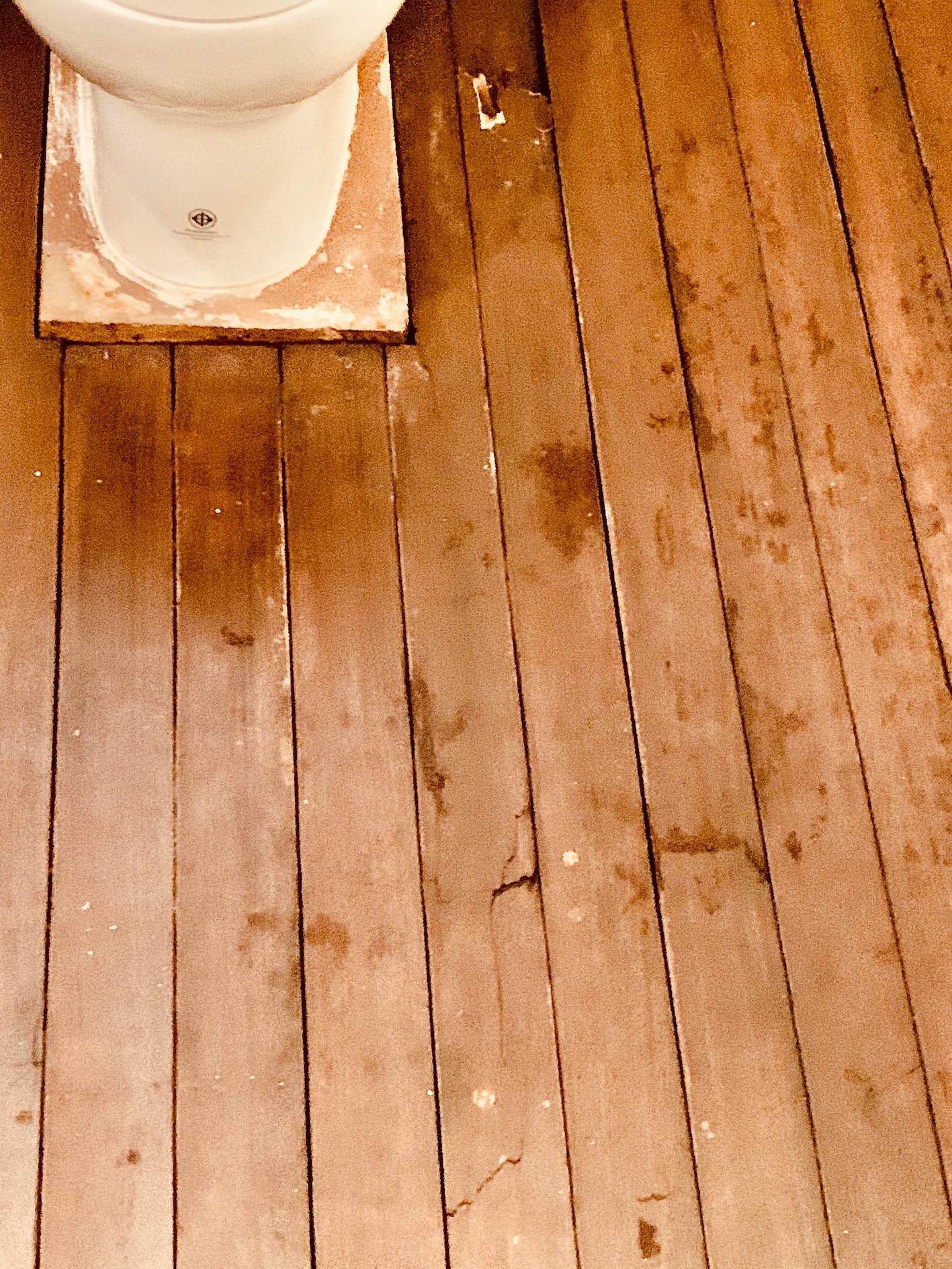 The furnishings at Suon Angor weren’t the only things falling apart. So was the city, the country and seemingly the world at large. It was here that we understood just how serious the pandemic was becoming, as thousands of people began fleeing Siem Reap in order to get home.

Stuck in Cambodia During the Global Pandemic. 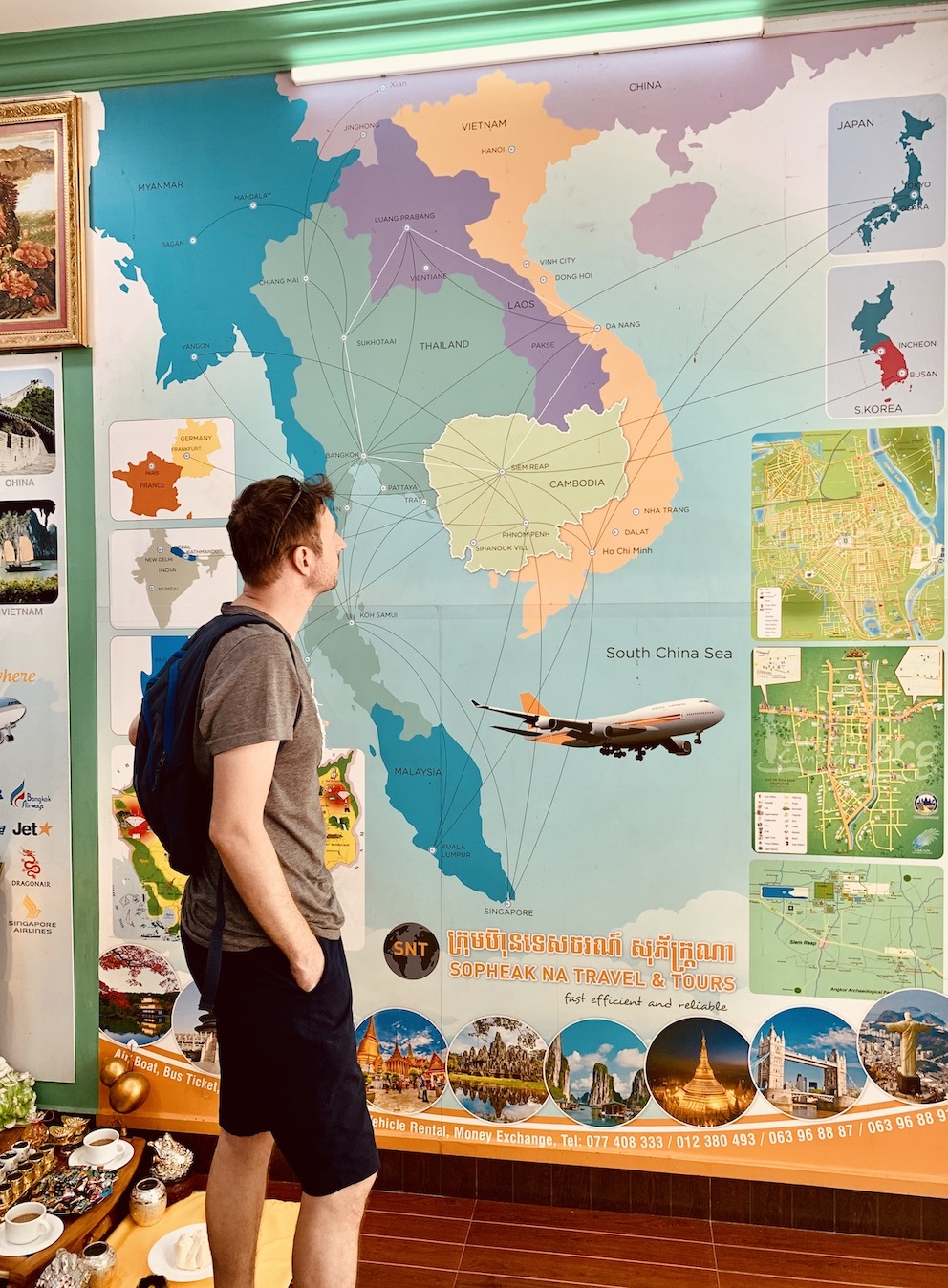 Somehow, on the still-not-very-good WIFI, I managed to bumble through my classes. When not teaching, we were scrambling around trying to figure out where we could go to stay together longer than just a few months. We wanted to avoid separation at all costs, an outcome that seemed increasingly hard to achieve as borders closed all around us. At one point we were about to book flights to Serbia (where I could smoothly apply for temporary residency). But then the airports closed and we were back to square one. 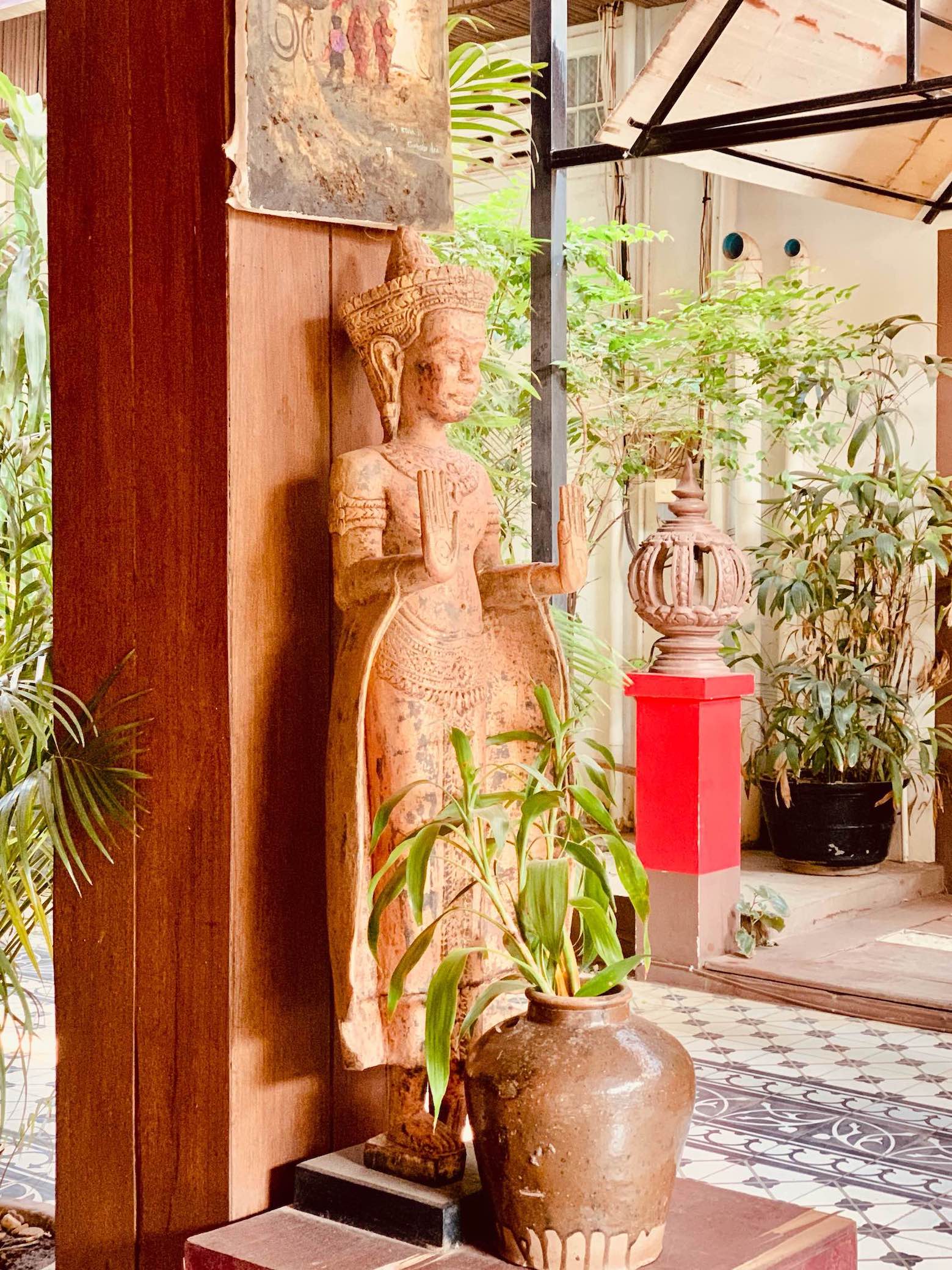 During those first three or four days we were really grateful for the onsite restaurant. With the clientele disappearing, we usually had the place to ourselves, a lovingly arranged jungle garden stuffed with greenery that did much to calm our prickly nerves. 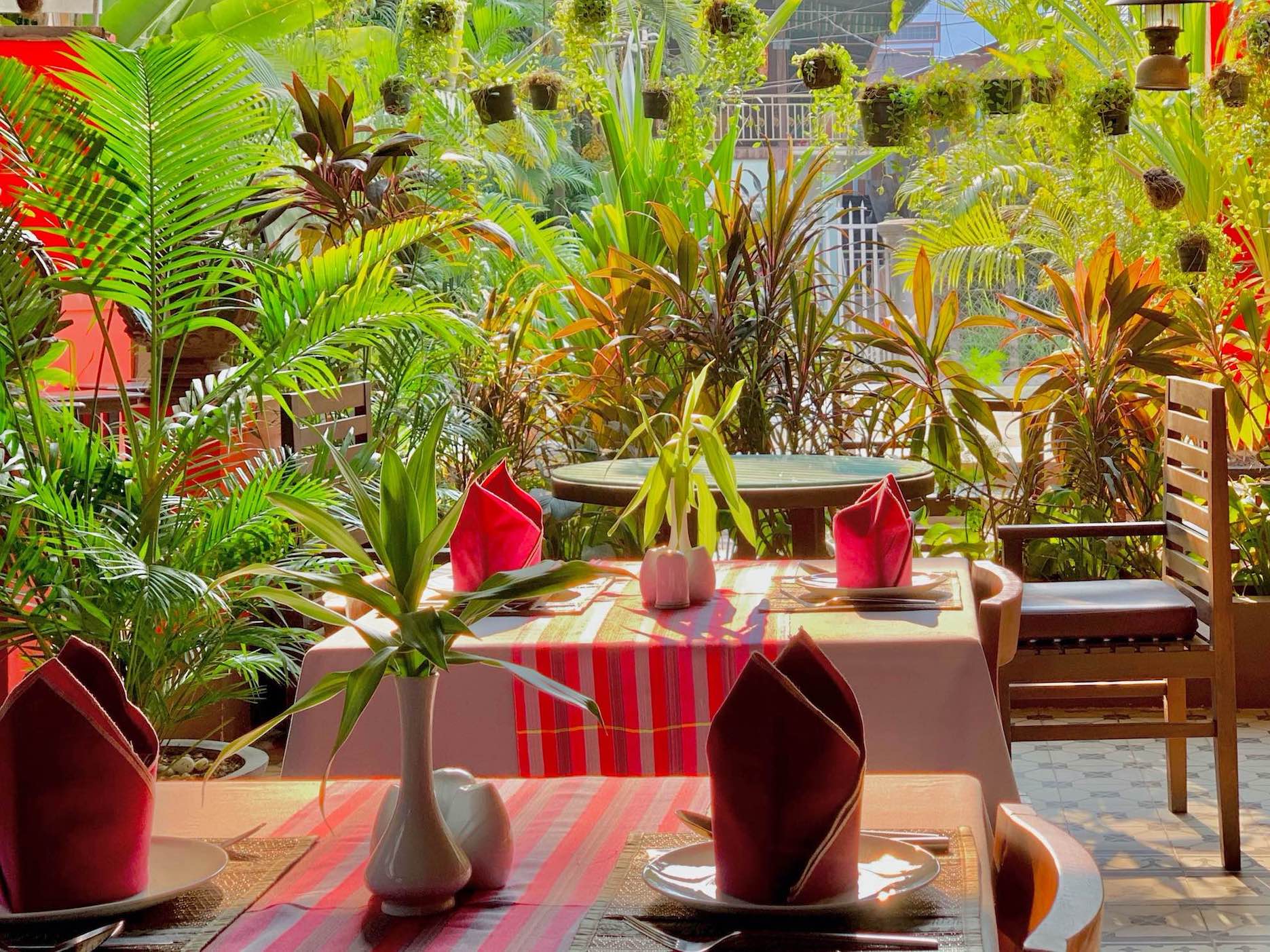 An oasis of calm.

The food was a little pricy but decent, in the beginning at least. The city’s restaurants and cafes were falling like flies as people closed up, hence we took most of our meals within the hotel. Generally, their Khmer dishes were better than their western creations. 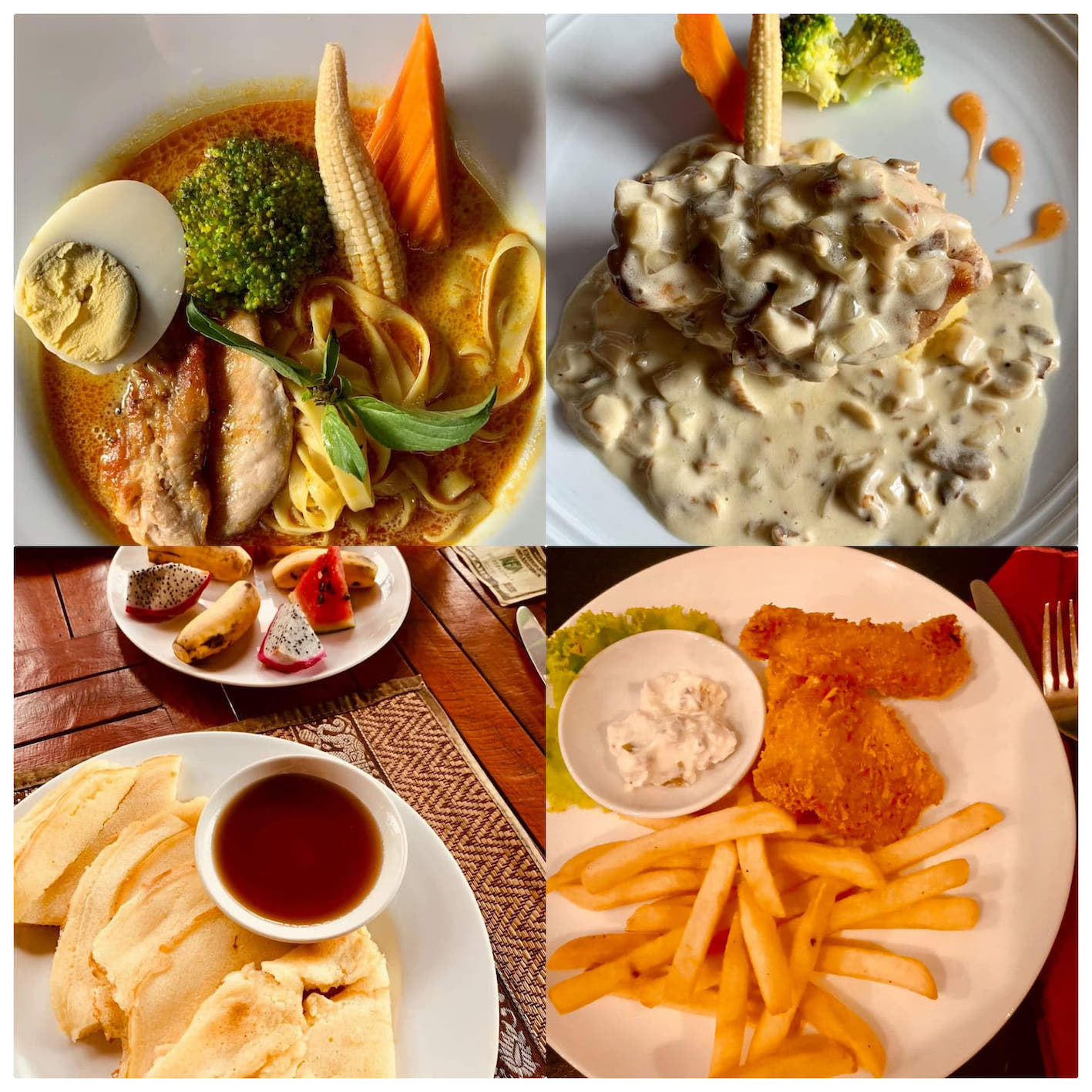 But the situation soon deteriorated. First, we were served meals that had clearly been hastily thrown together and were barely lukewarm. Then the portions began shrinking, until one evening dinner came with a somewhat laughable eight French fries. 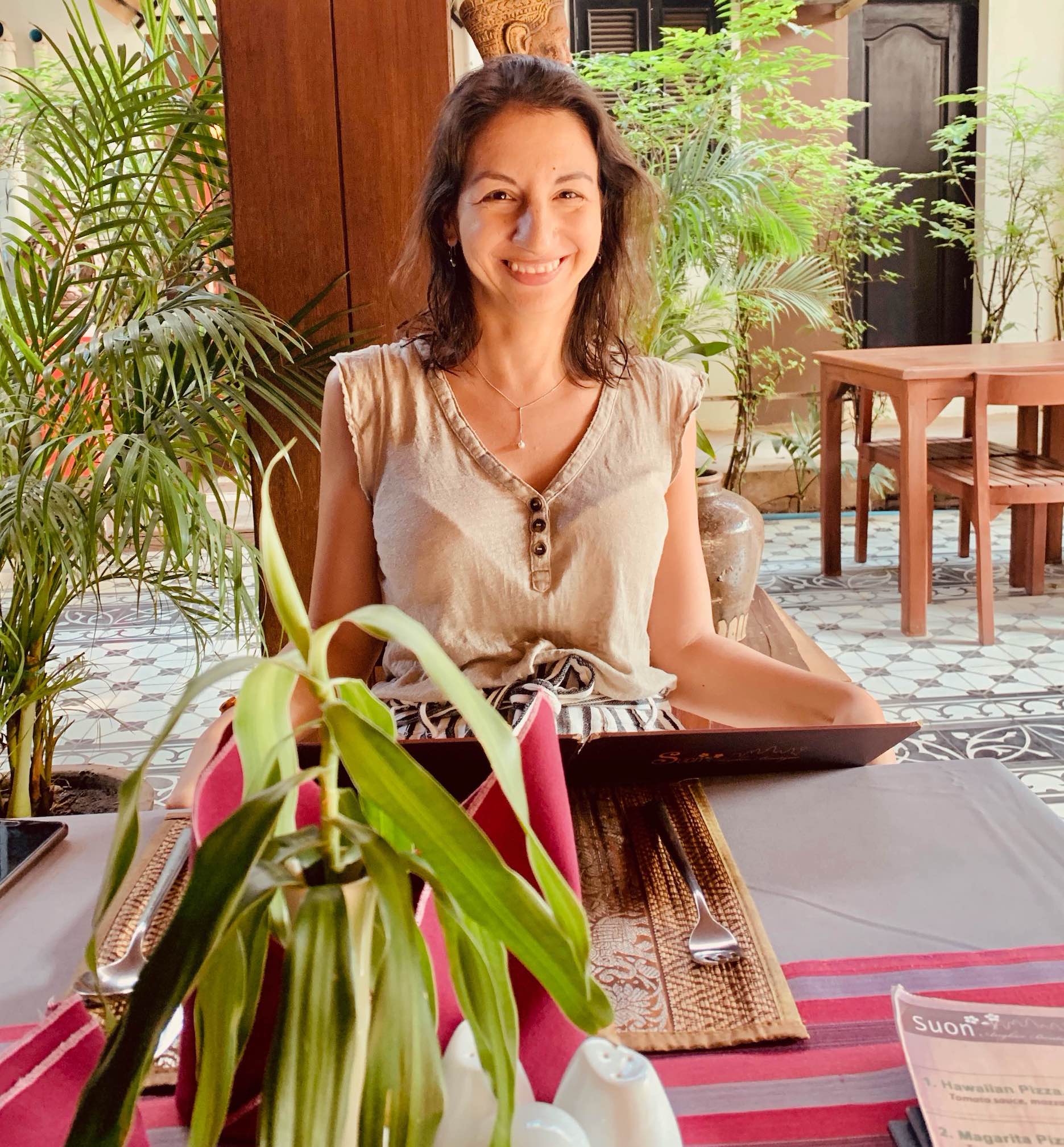 Sladja, unaware that her meal is going to be a disappointment.

Finally, we sat down one afternoon, only for our hostess to merrily inform us that the kitchen was closed. “The Chef isn’t here!” she smiled. After that, it reopened only sporadically. One evening, we hung out in the restaurant on the patchy WIFI trying once again to work out a path forward. We had just returned from a local travel agency, who revealed that Sladja’s Cambodian tourist visa could not be extended, even with the special circumstances unfolding. 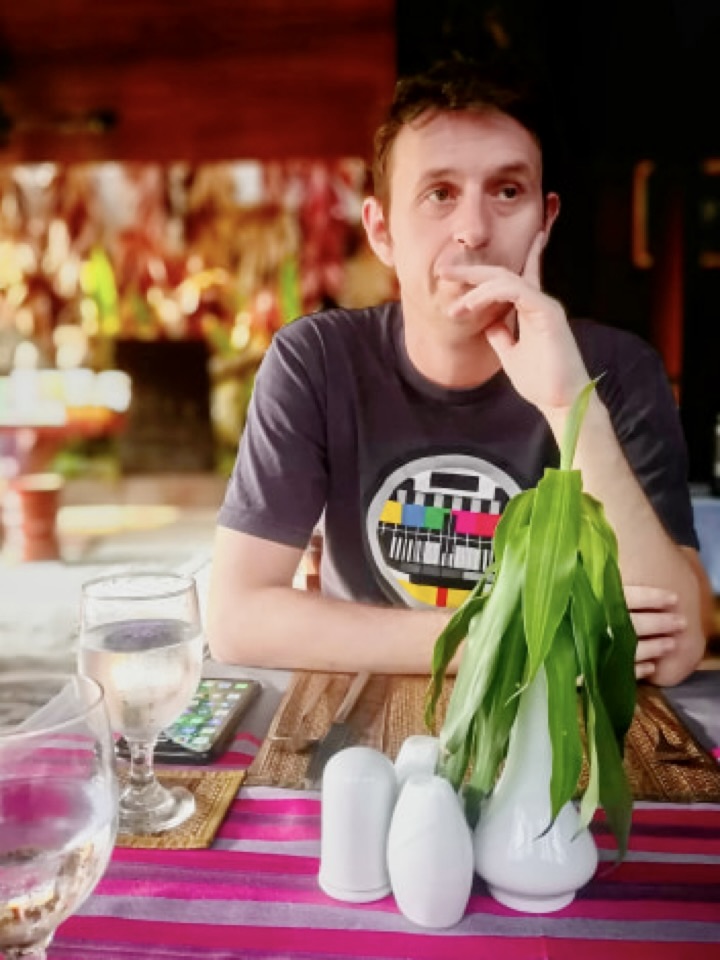 The swimming pool was a godsend. In between everything, we made several visits here daily. It was a real privilege, the perfect place to get some exercise or simply nap in the sun and try to empty our minds. 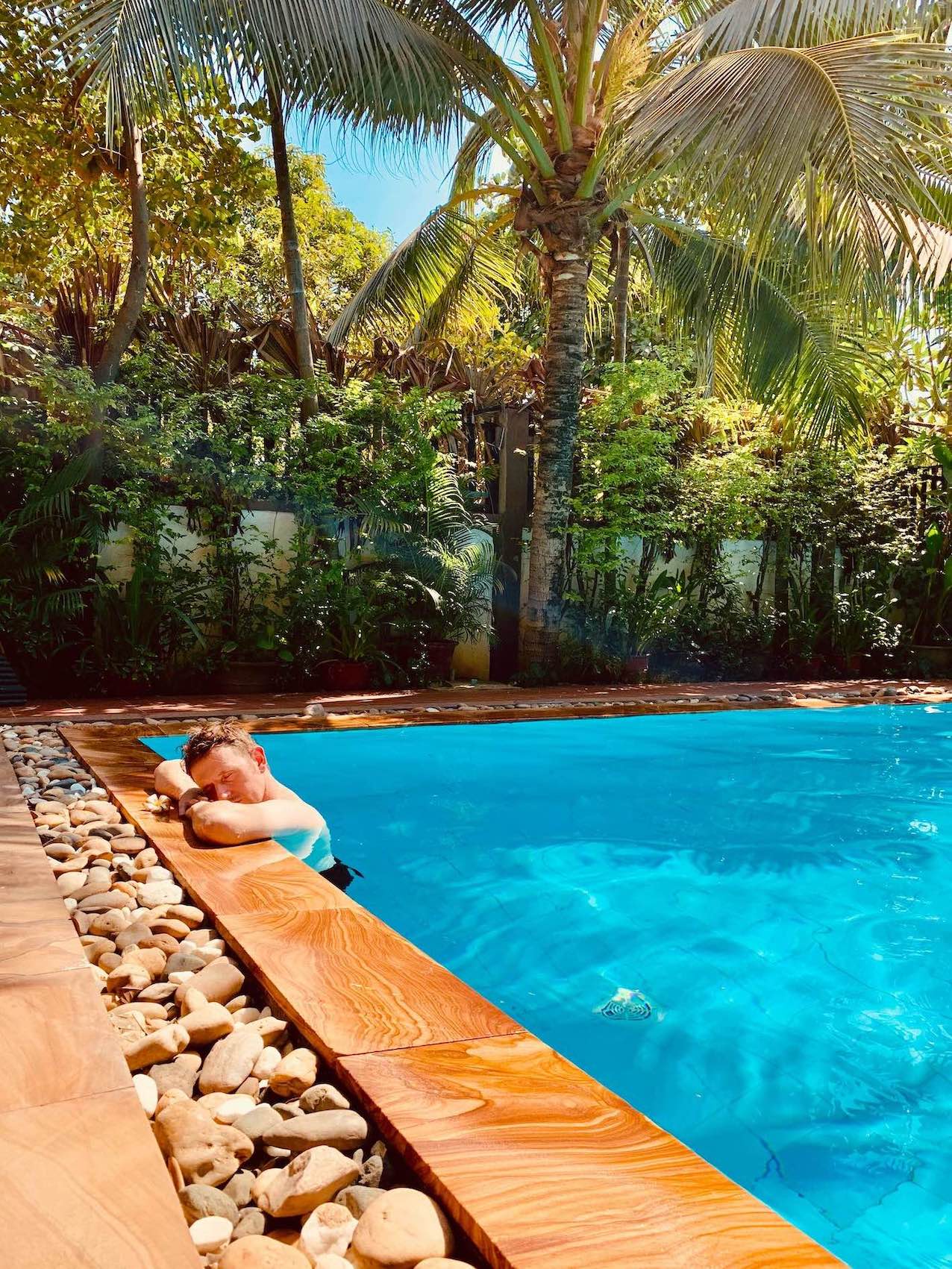 It was also at the pool that we met the hotel’s last remaining guest, other than ourselves. He was a French guy who had just booked his flight back to Paris. “Wherever you go it should be soon”, he told me. “The flight price is crazy and in the next weeks I think every country will be closed”. He departed the next day, leaving us as Suon Angkor’s only residents.

Living in Siem Reap during the Global Pandemic. 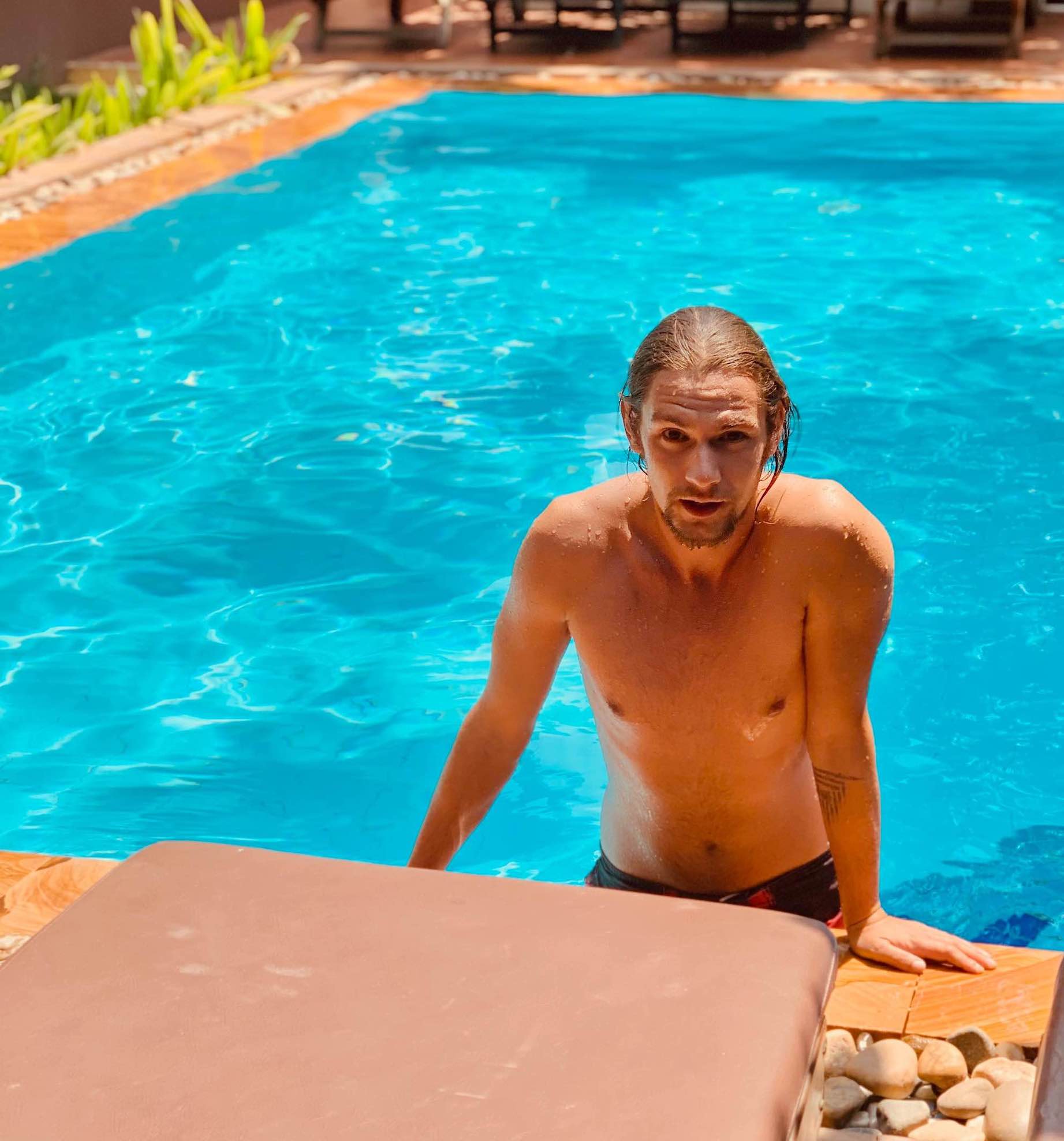 With ideas fast running low, we eventually took the unsatisfactory decision of booking Sladja onto a flight back to China. Despite everything, her school was keen for her to return and this avenue at least represented some stability and continued employment. For a million reasons, some obvious, others more complicated, she hadn’t planned on going back to China. But in the end, this seemed the best solution. Kerching went the credit card and then, just a few days before the flight, the Chinese government announced it had closed its borders. And that was that, we never did get a refund. 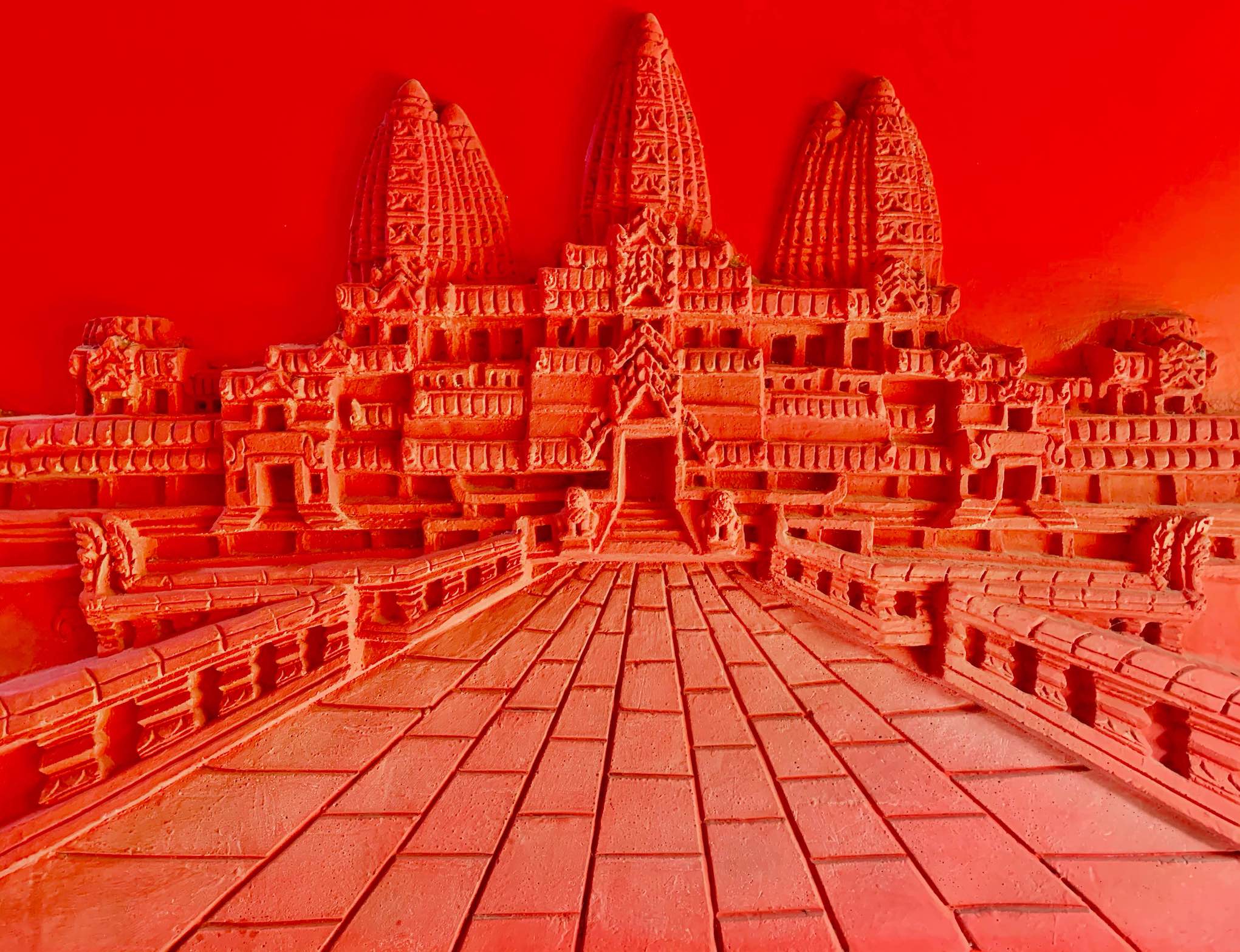 Soon after, we admitted defeat and decided to stay in Cambodia. There was a rumour flying around that the government was going to waive overstay fees on tourist visas (a promise they later delivered!) On some days the hotel felt abandoned, even most of the staff had been relieved of their duties at this point. As a result, it was deliciously quiet as we strolled through the various courtyards and corridors on our way to and from our daily swims. 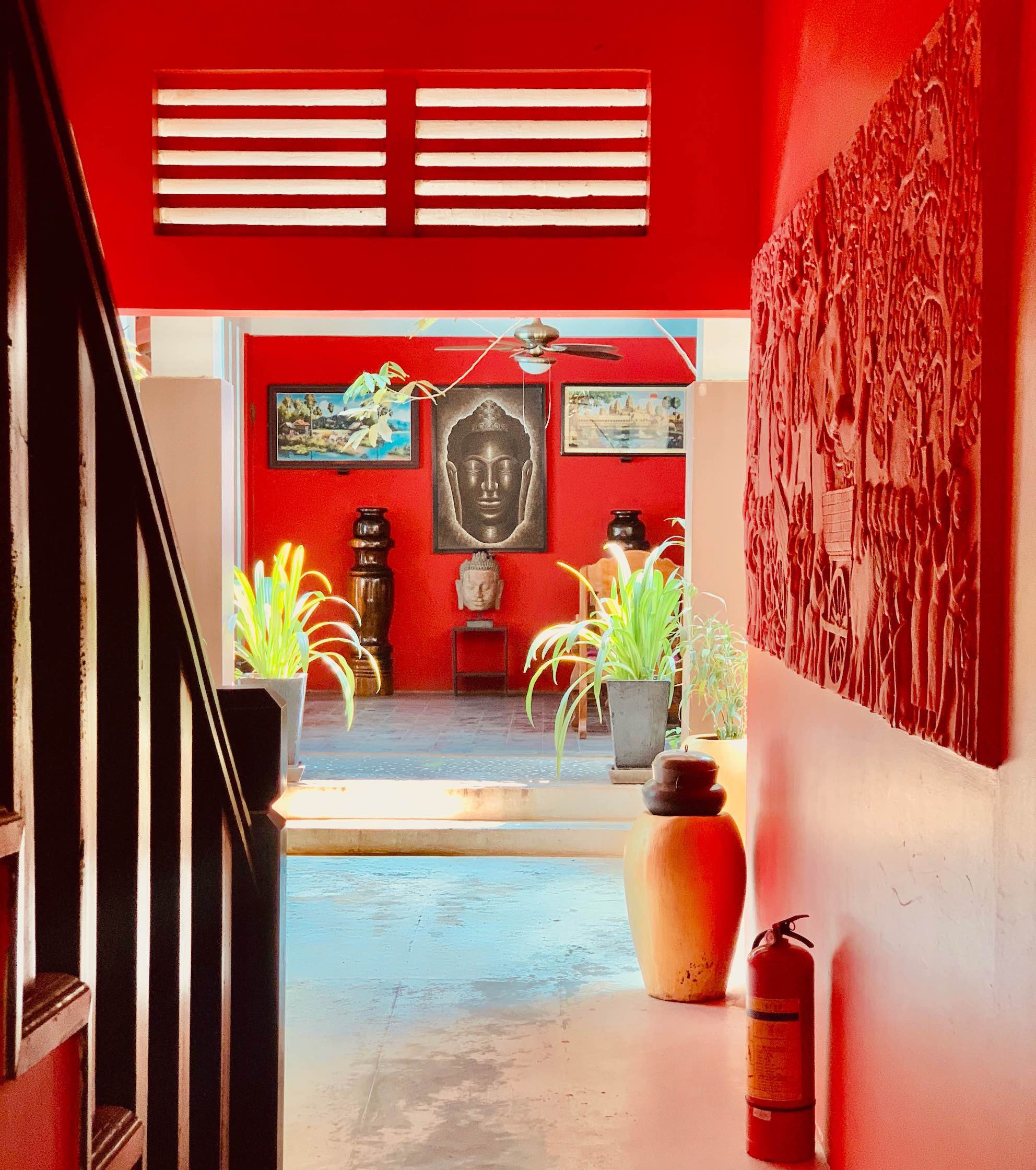 If we were going to ride out the pandemic in Cambodia we knew that… sigh… we’d need to change accommodation again. Thus we set about apartment hunting in a market where hotels and guesthouses were shutting up shop at an alarming rate. On occasion, we would go out to take a look at a place, but the good old WIFI nearly always proved to be a stumbling block. 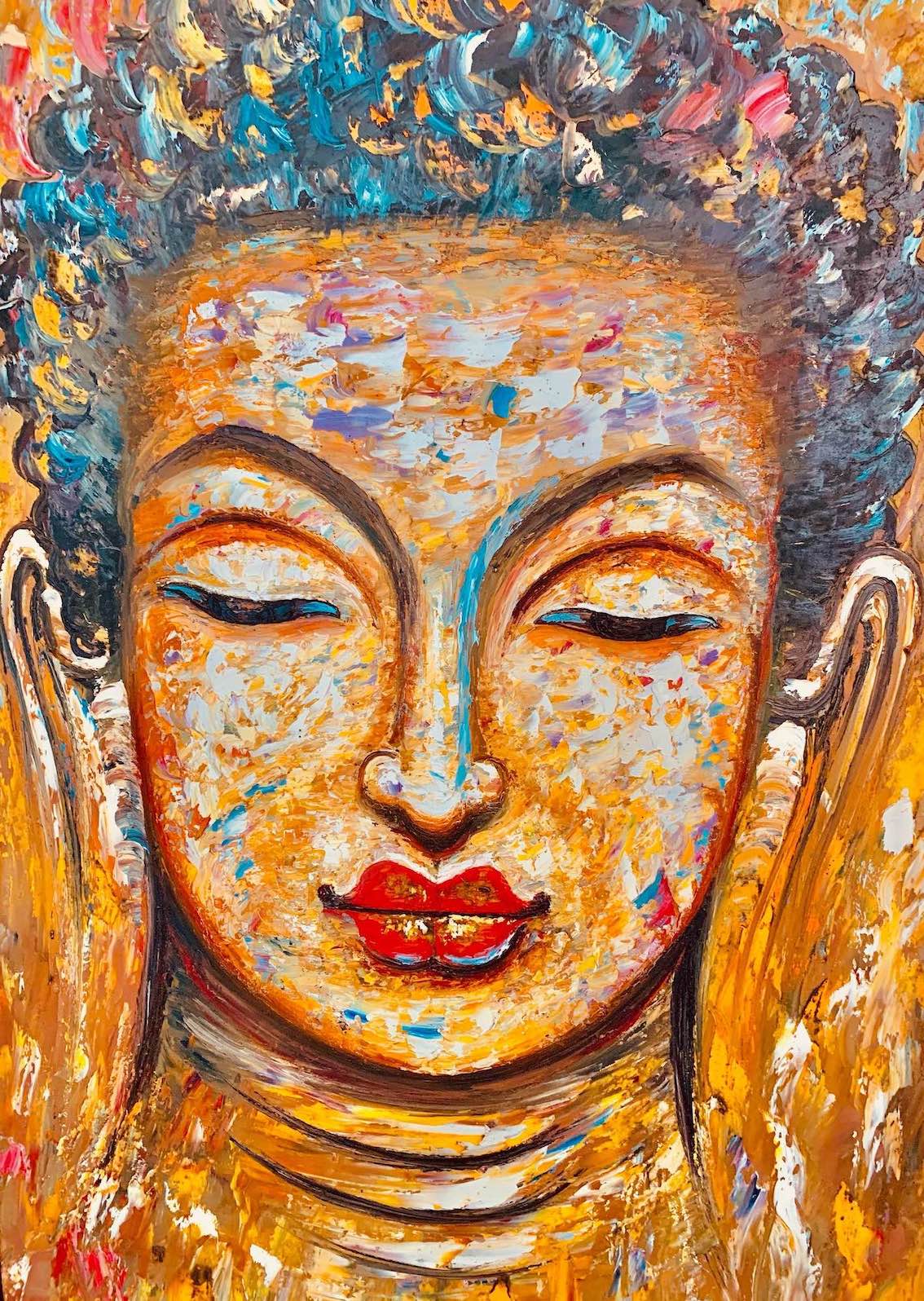 “Welcome hoooooome!” sang our hostess each time we returned. In truth, this empty greeting was starting to grate. In all the days we stayed at Suon Angkor she never once asked us how we were getting on. Or whether there was anyone she should call, or something she could assist with. When we did ask her for basic solutions to the hotel’s many shortcomings, she rarely came up with the goods. So we slipped into the habit of staying polite and keeping to ourselves. 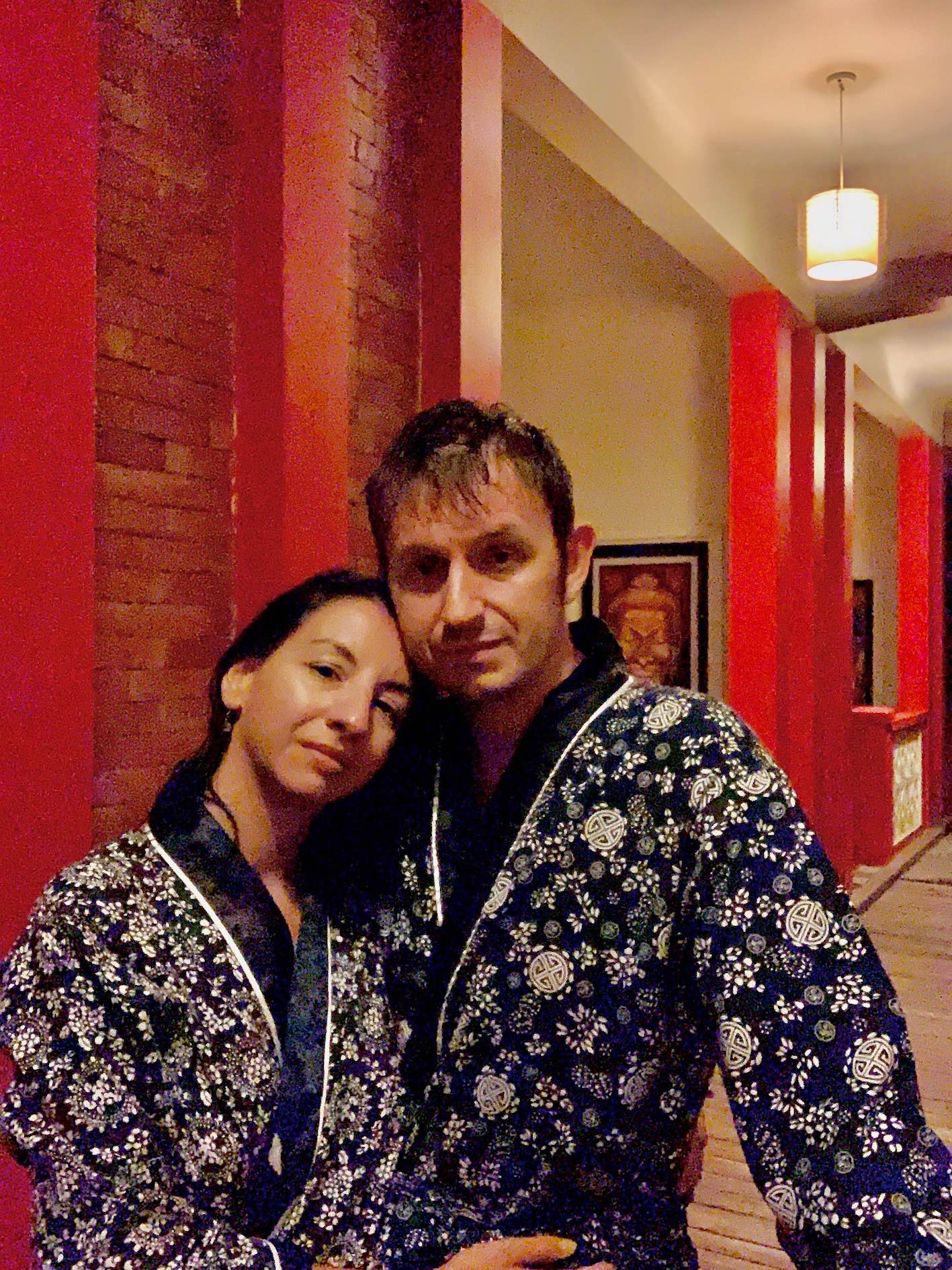 Luckily, by starting our accommodation search straight away, we were ahead of the curve. One morning, Ms. Cheerfully Unhelpful informed us that Suon Angkor was closing at the end of the month. Within twenty four hours we had found our new (and last) place to stay in Siem Reap. A hotel that, as it turned out, we will also remember for the rest of our lives. But this time for the right reasons. 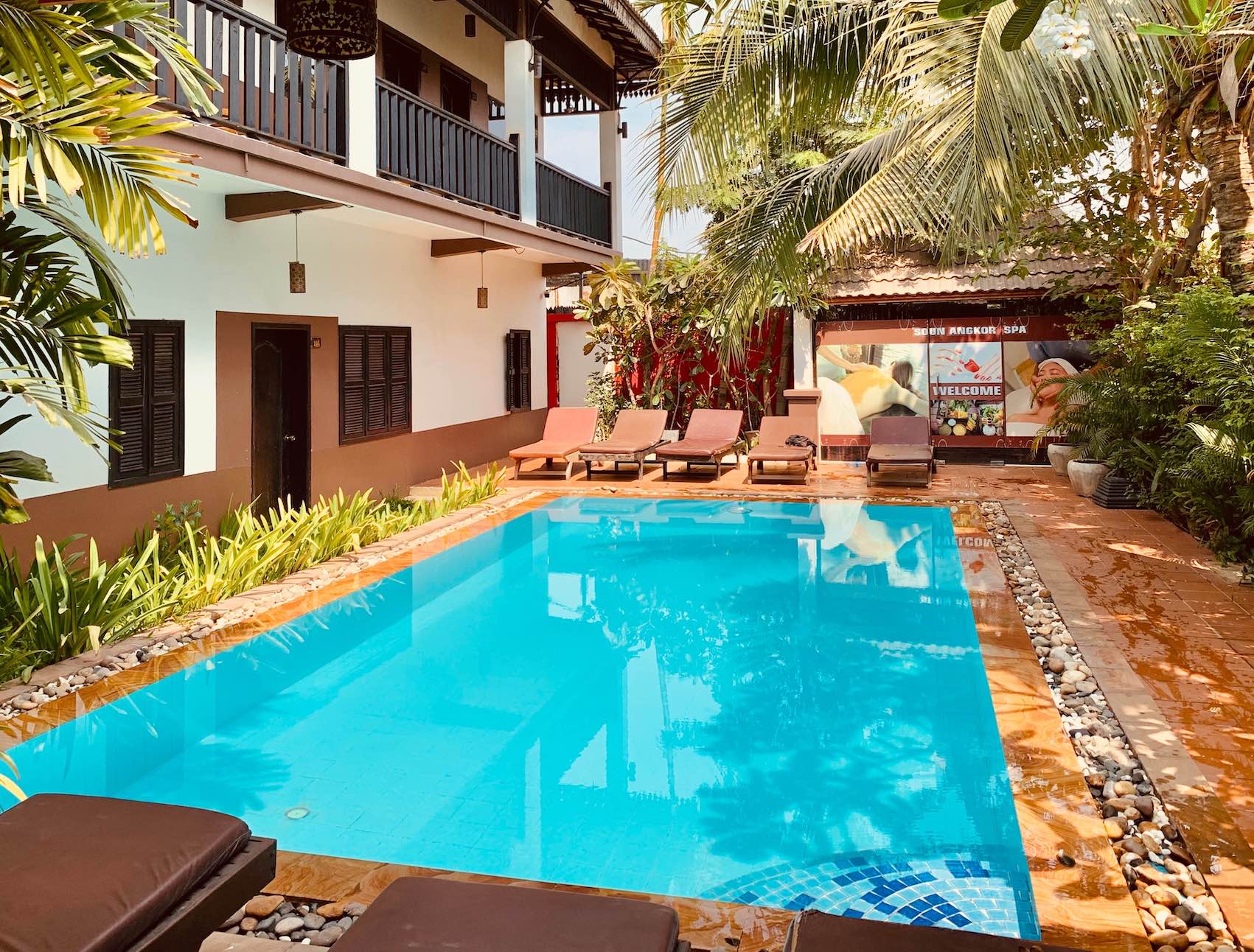 We stayed at Suon Angkor Boutique Hotel for thirteen nights. It’s difficult to give a fair assessment of them at what must have been an exceptionally challenging time. It really was a beautiful and peaceful compound, but terribly tatty for a place advertising themselves as luxurious. 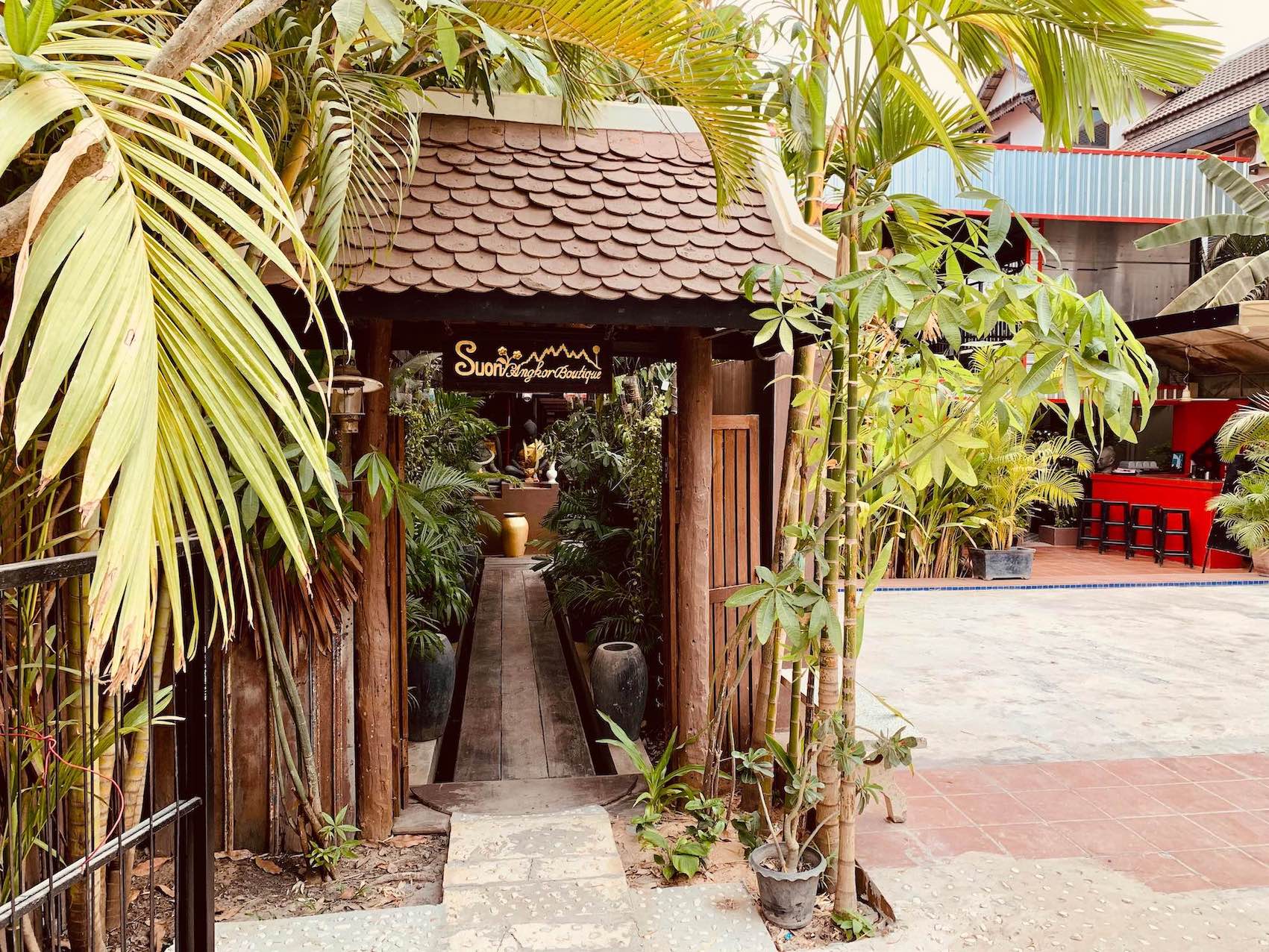 At the time of writing it is unclear if they ever reopened. On the one hand I see that they aren’t marked as permanently closed anywhere. They also show up on several booking sites. However, their last reviews date back to March 2020, the month of our stay. So I guess it isn’t looking good… another one bites the dust.

For a look at Siem Reap’s excellent cafe, restaurant and bar scene, check out my detailed guide on Where to Eat and Drink Siem Reap.