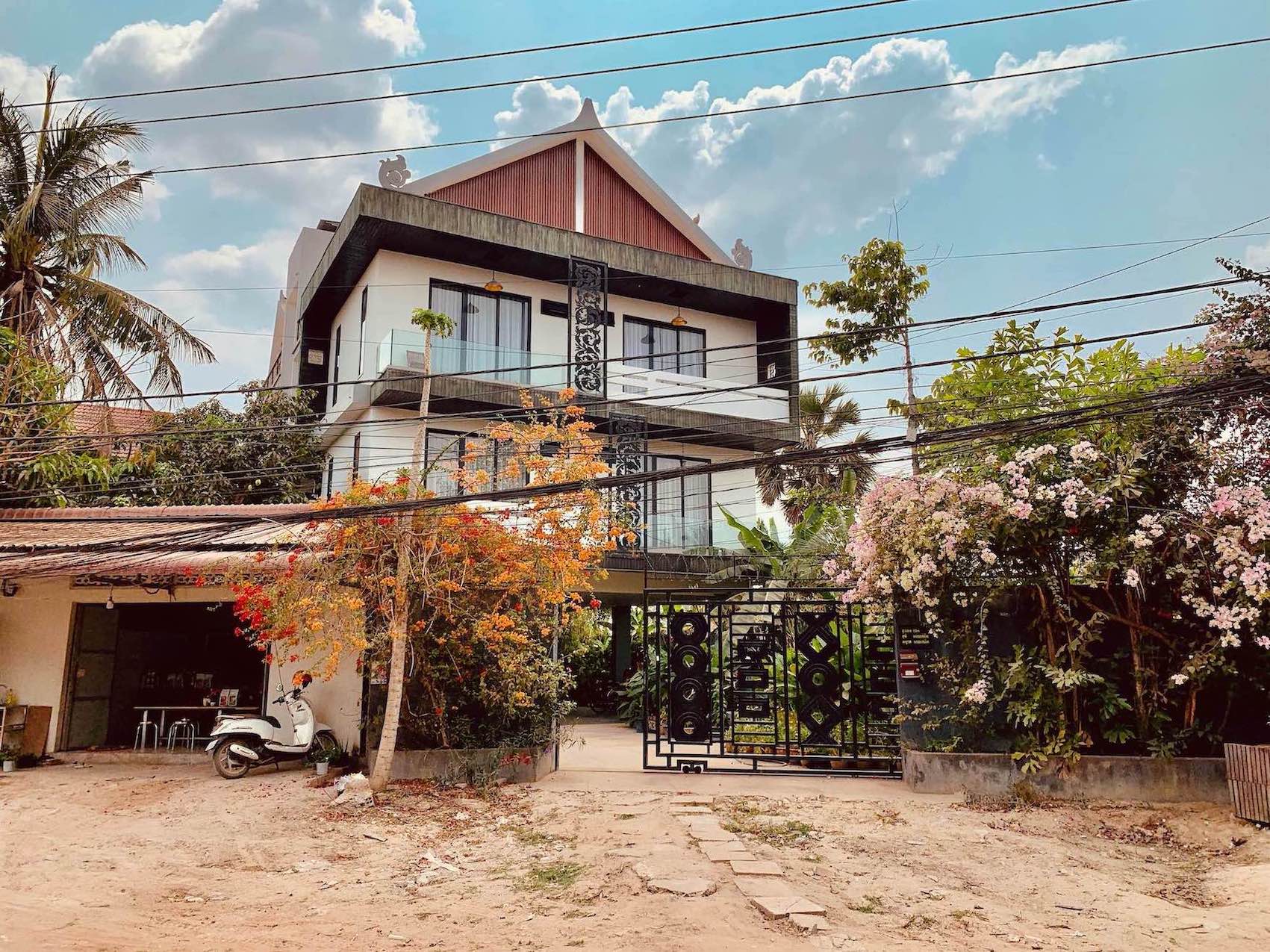 As you may have noticed, I have really gone all-in with my blogs on Siem Reap. I began with my guide on What to See and Do. Then came an overview of The Angkor Temples, followed by the stories behind the city’s most popular cafes and restaurants. Seriously, those of you who have followed all these articles deserve some kind of award 😉

Finally, in for a penny in for a pound, I’ll wrap up my coverage of this lovely Cambodian city with a look at the accommodation scene and the places we stayed at. For our first three weeks we lived in a tiny studio at a guesthouse called Sakura Home (which sadly didn’t survive the pandemic). 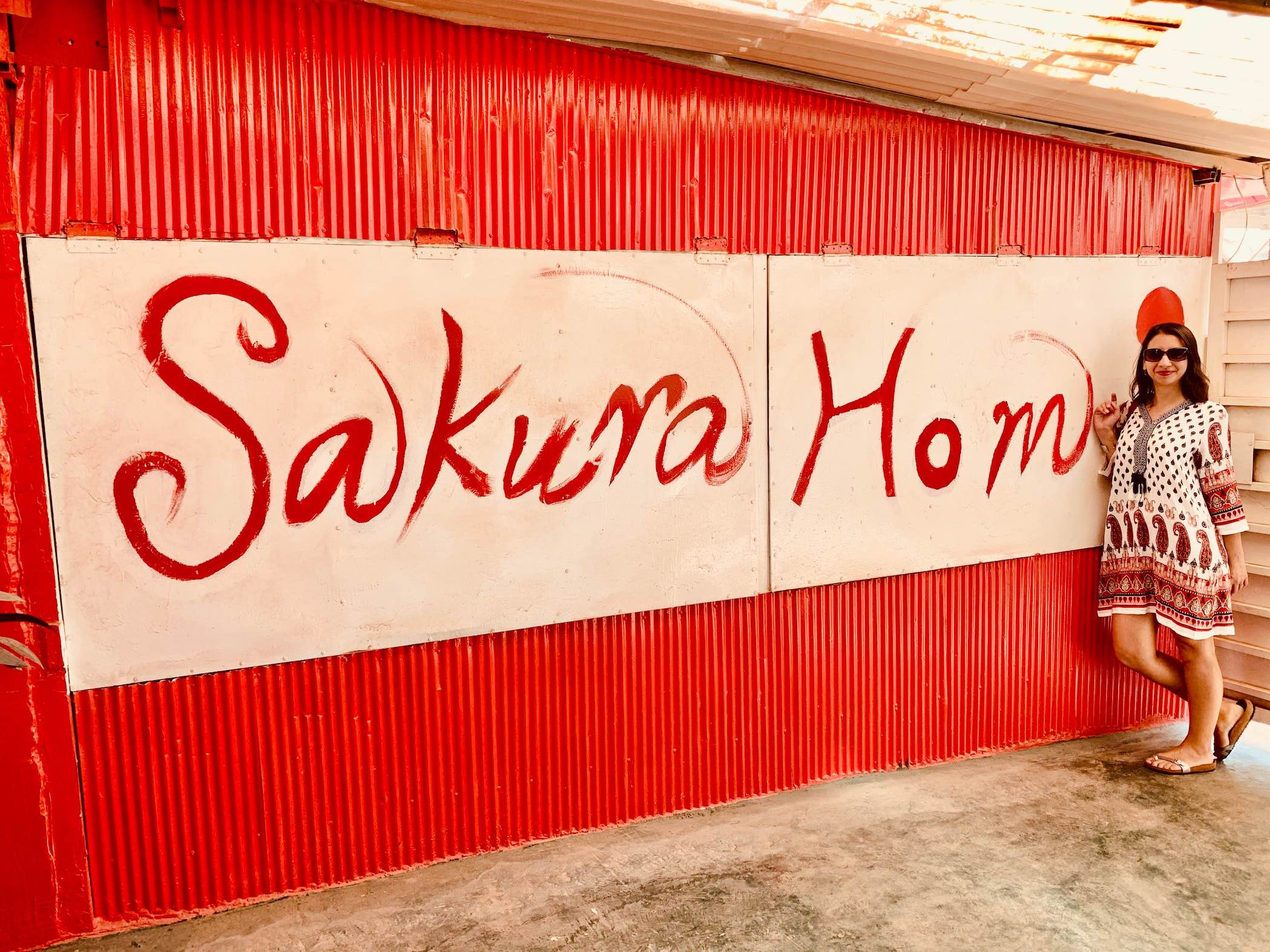 We have fond memories of our time there, despite the cramped conditions. First and foremost, it was incredibly cheap and enjoyed a fairly central location. Moreover, the owners (Kana from Japan and Antonio from Spain) were really friendly and welcoming. Oh, and it was surely the only place I’ll ever stay at with window views over a crocodile farm! Yikes. 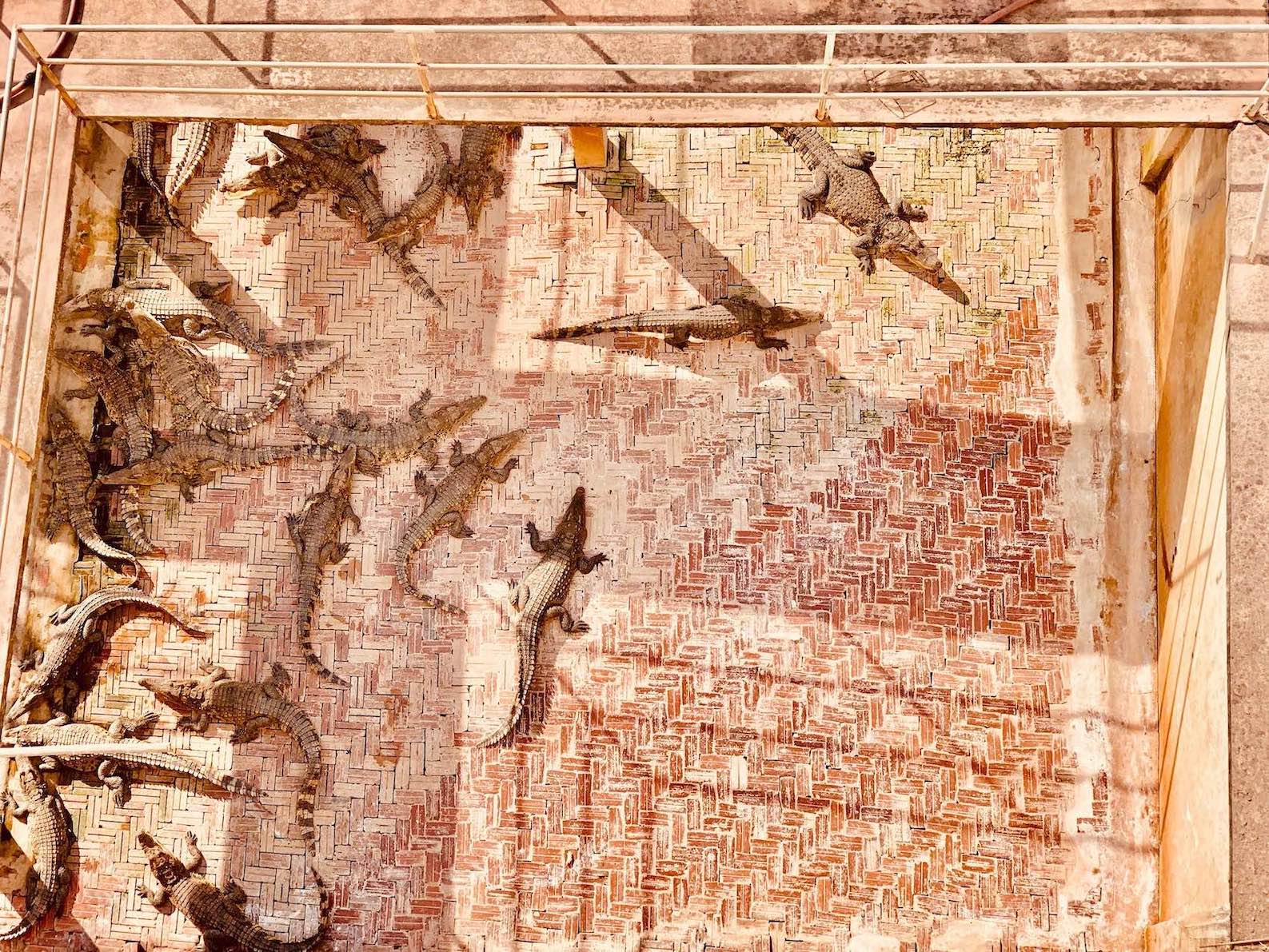 A room with a view.

As fond as we were of Sakura, Sladja and I knew we needed a bigger place. Thus we quickly took up the opportunity to rent a friend’s apartment for a couple of months. Jonathon had been living in Siem Reap for years, renting a third floor flat in a complex called The Foster Apartments on Sala Kamreuk Road.

Here, I figured we’d have the space and comfort to fully embrace our lives as working digital nomads. Right from day one I was struck by how well-kept the compound was, especially the spotless ground floor courtyard with its lovingly tended plants, bushes and flowers. 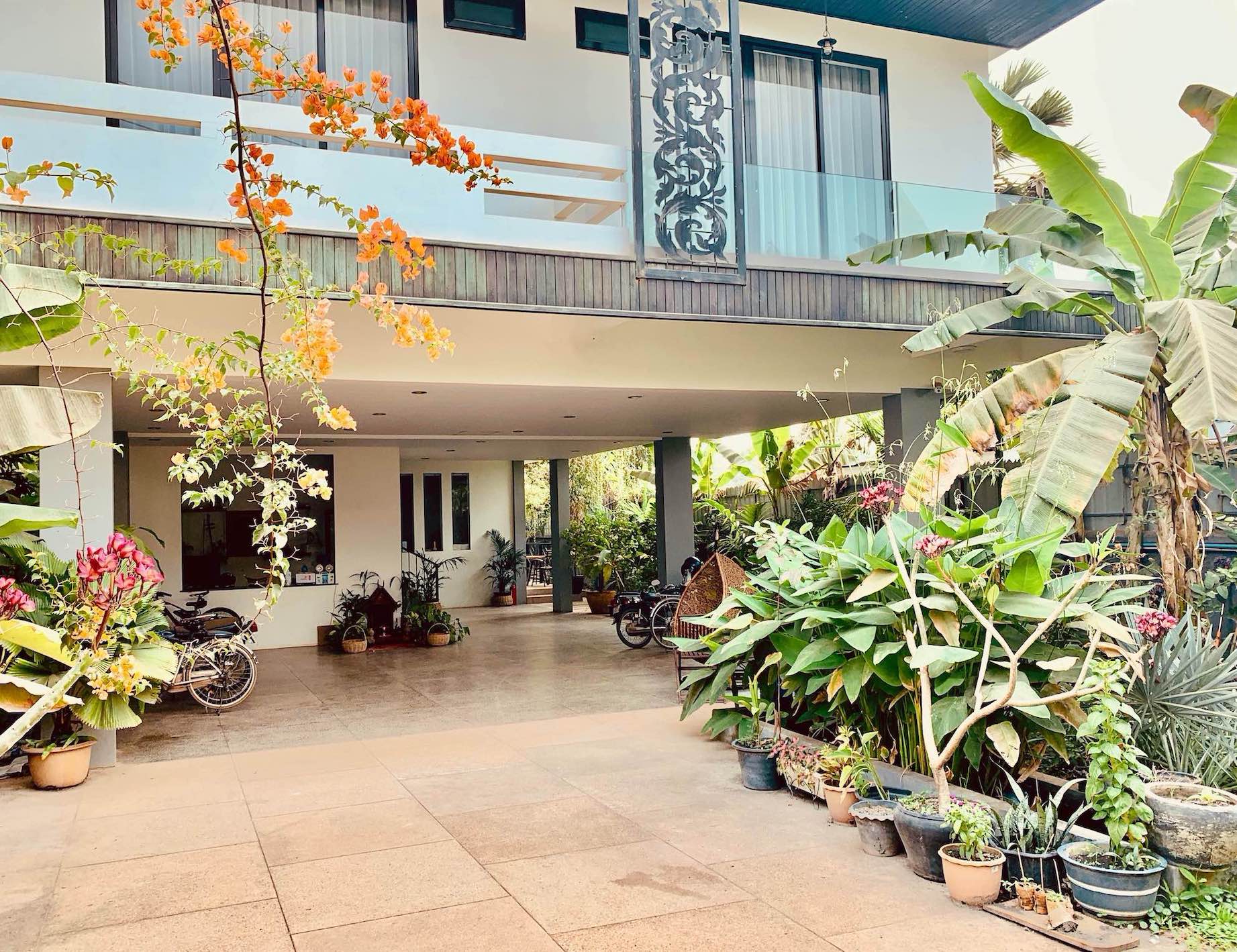 It was just a modest one bedroom joint, but still a giant leap from the minuscule box room we’d had at Sakura. It was simple in design and somewhat sparsely furnished, but had everything we needed. Back then I was teaching English online for a Chinese platform called Palfish. And it was here in the living room that I set up a workstation for my evening classes. 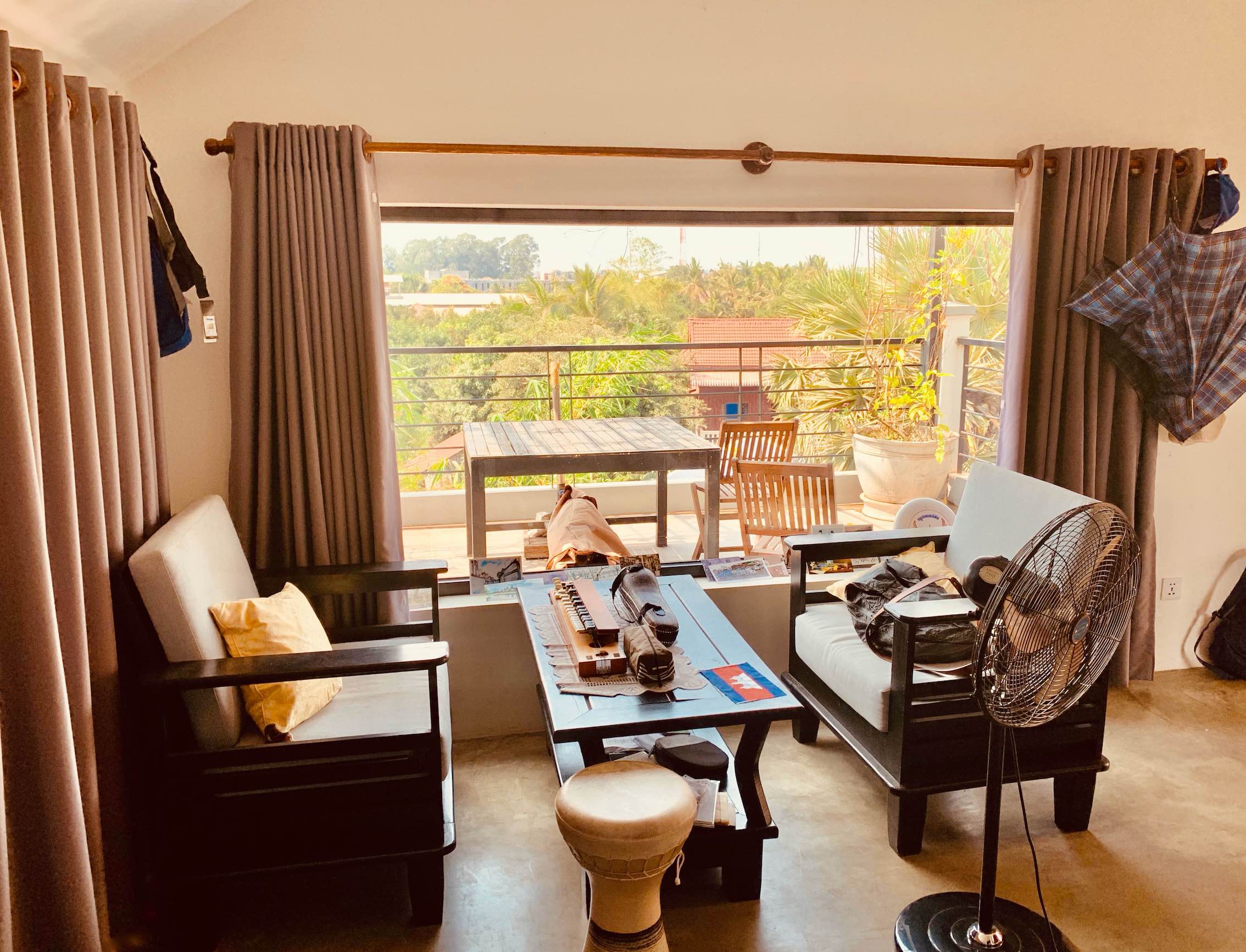 The kitchen was a bit clunky, but functional. In addition to the fridge and washing machine, there was loads of counter space and a large stove area with several hobs. The ability to cook for ourselves felt wonderful, and at long last we could hit the supermarkets and local fruit and veg stalls with abandon.

Whenever our fresh drinking water supply ran low, I would scamper across the road to pick up one of the giant blue containers from the general store. They were just $1 apiece, but an absolute bugger to carry up the stairs. 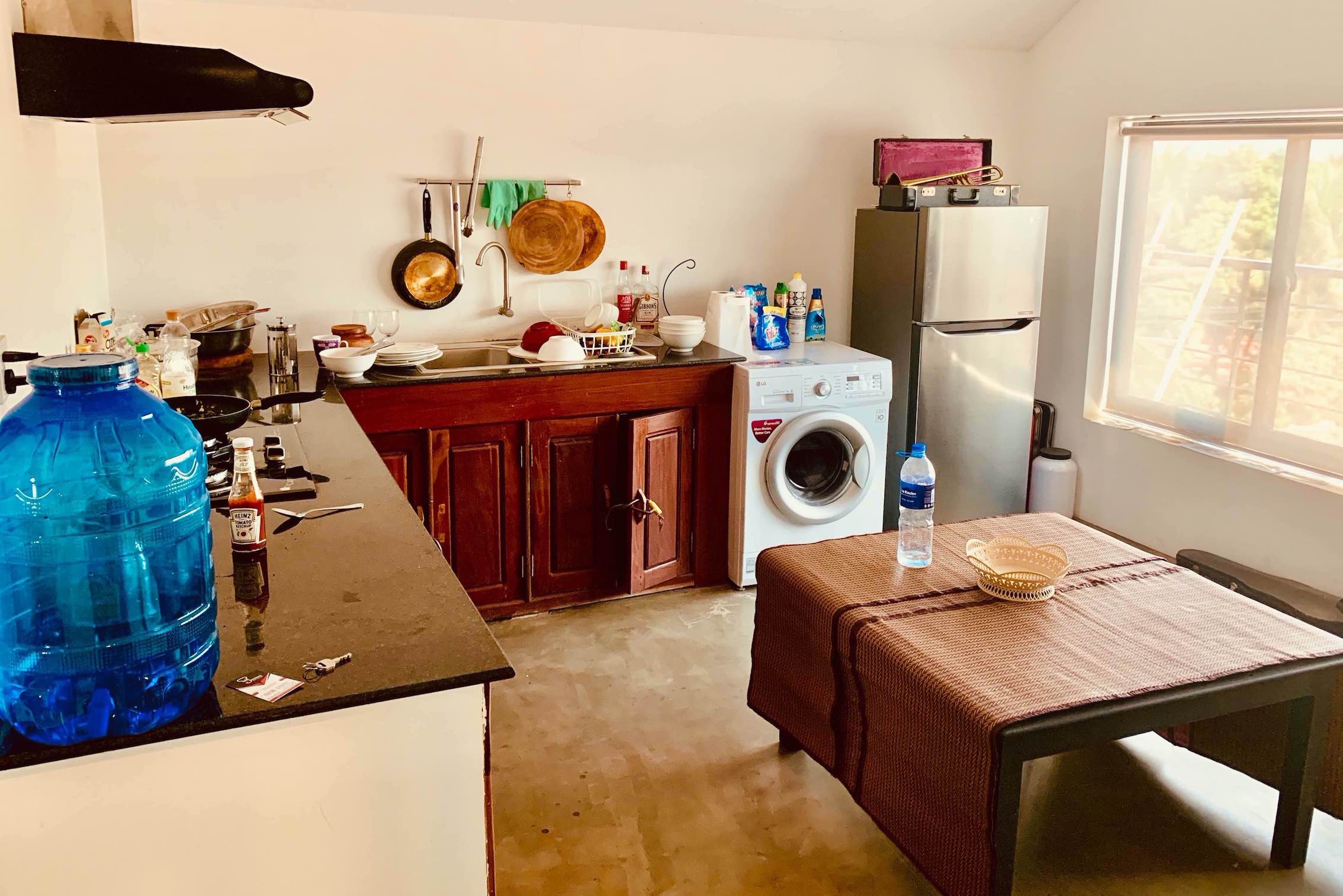 In our sleeping quarters, I loved how the bed took up over half the room. A large, wall-mounted TV meanwhile was perfect for our month-long Martin Scorsese marathon. Yup, 26 consecutive studio films from 1967’s Who’s That Knocking at My Door, right through to The Irishman in 2019. Most importantly though, the bedroom housed the air con unit. And boy did we need it to deal with that ferocious Siem Reap heat. 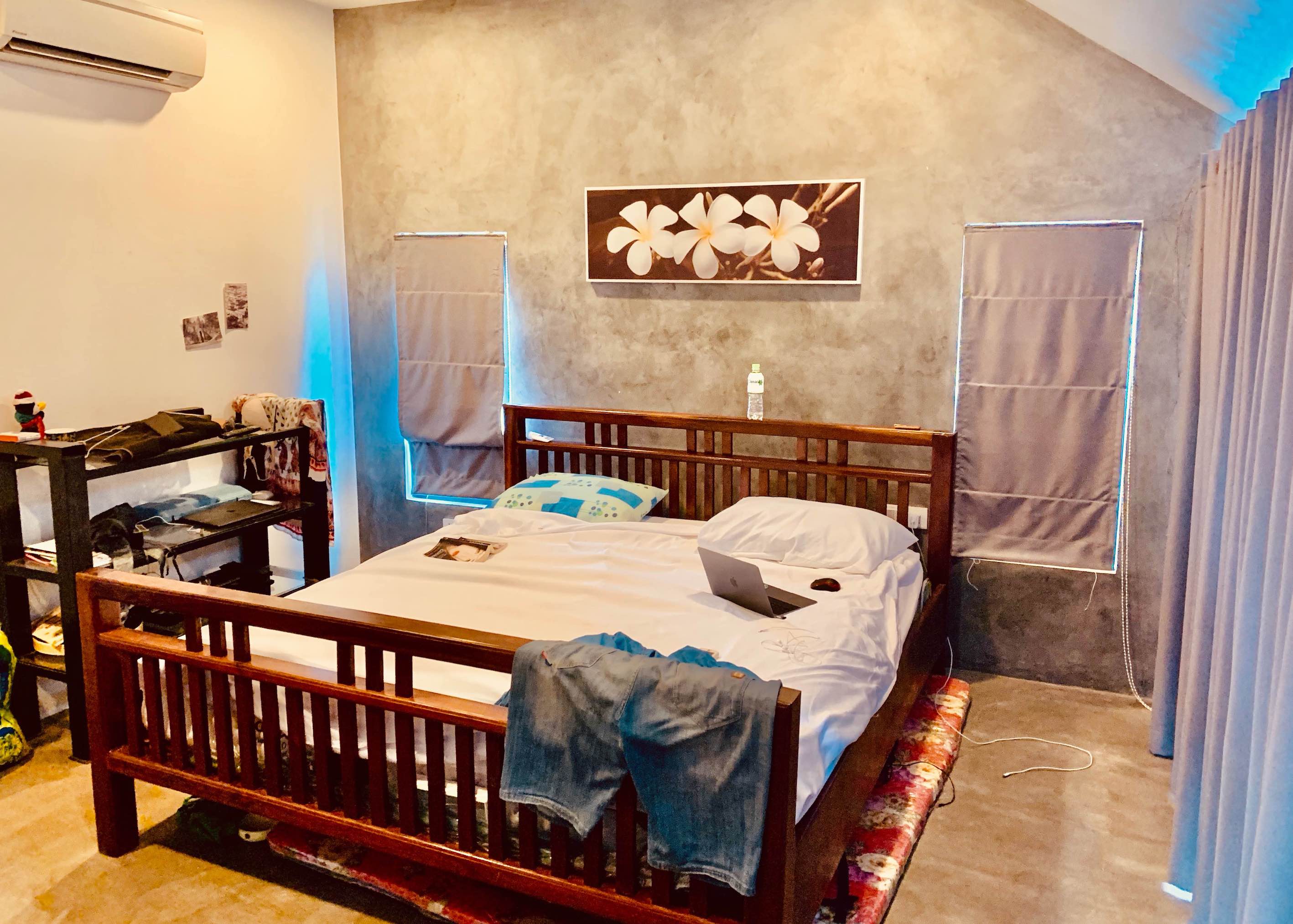 The bathroom meanwhile was just a massive stone wet room. It did the job, but hardly worthy of a photo. Which leaves the best for last… our delightful balcony with its lovely views of the sprawling, surrounding jungle. This is where we would take breakfast before the day’s insane temperatures truly kicked in. 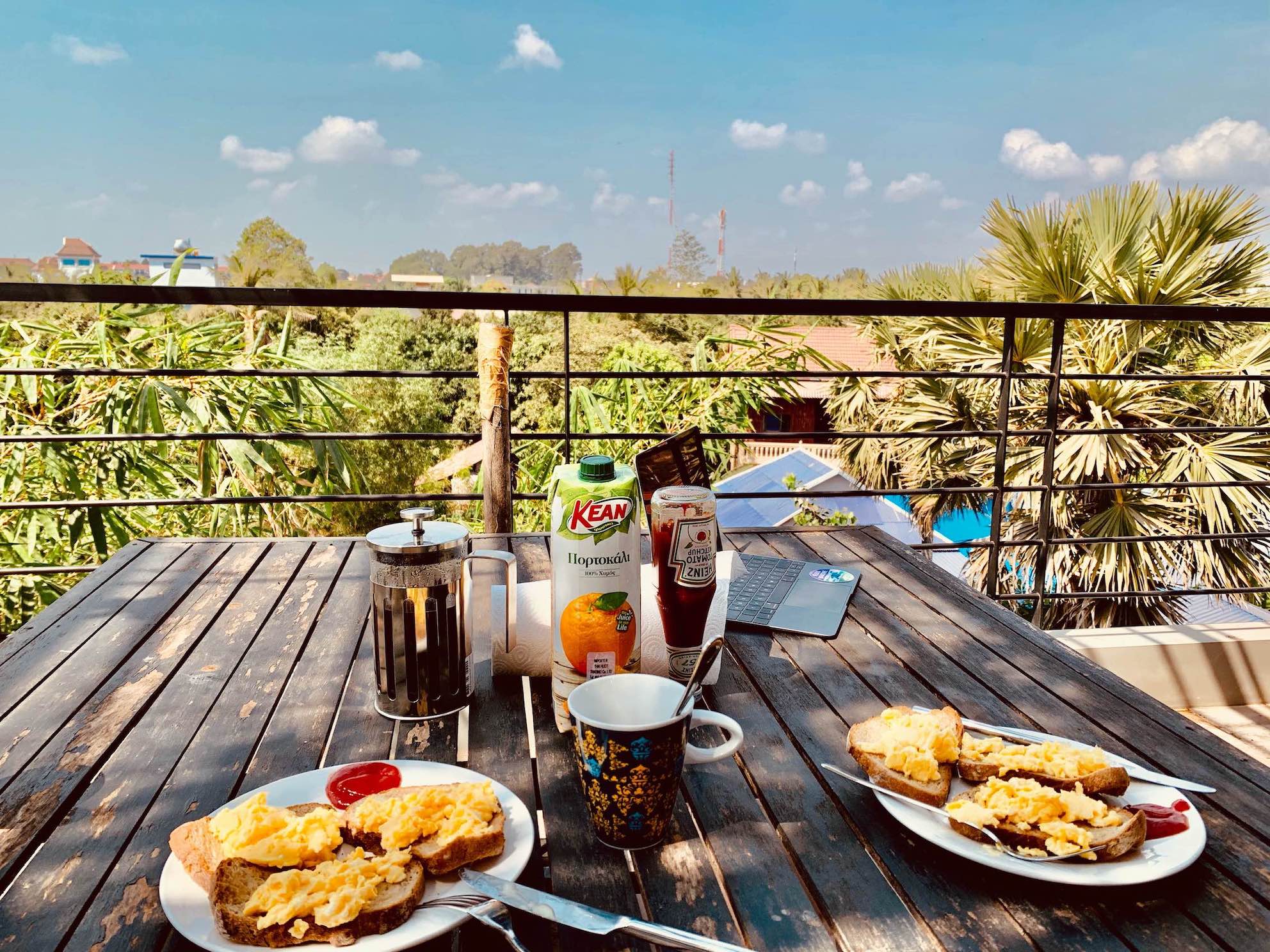 Evenings were similarly therapeutic. Some nights I would sit and blog, or set up Match of the Day on my computer with a beer and some chips. For the most part though, we would simply sit and absorb the gorgeous sunsets, of which there were many. 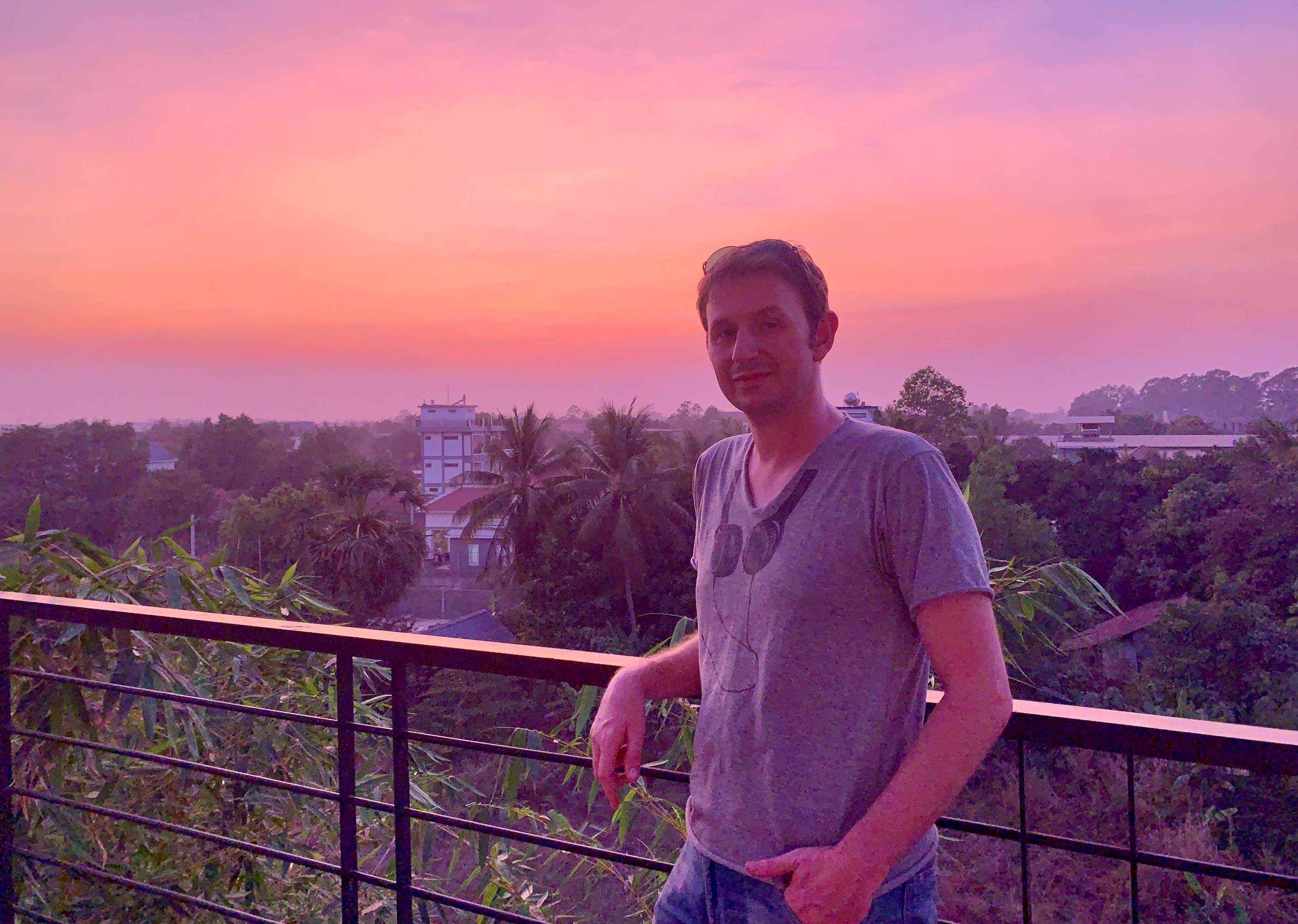 Sunset on the balcony at Foster Apartments.

The Foster Apartments was our base from which we set off on some of our most treasured Siem Reap adventures. Our trip to Cambodia Landmine Museum, an evening at Phare: The Cambodian Circus and meeting the heroic life-saving rats of APOPO to name but a few. To family, friends and acquaintances, it must have looked like we were living the dream. I suppose in some regards we were, for a while a least. 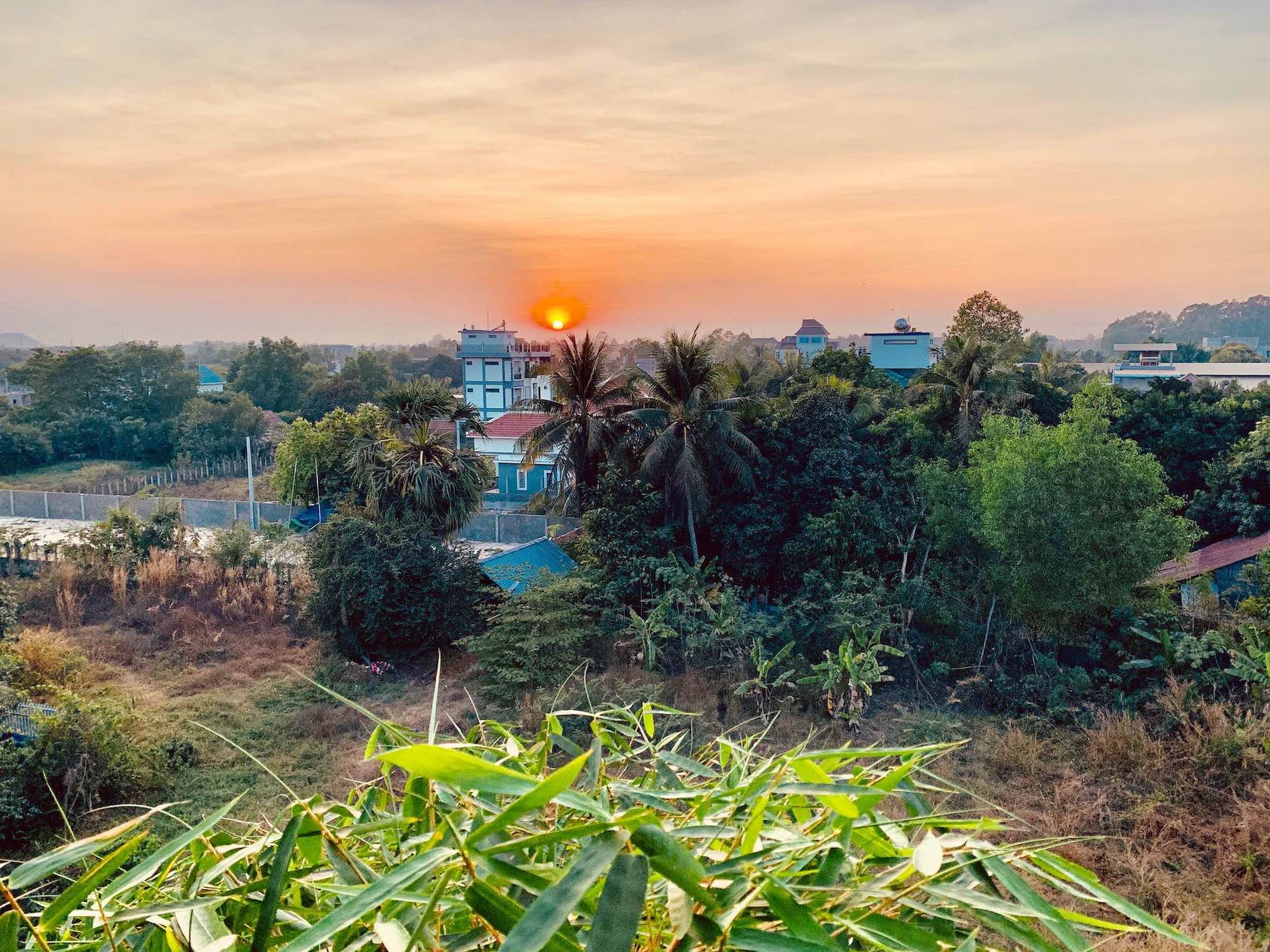 Balcony views from the rooftop.

However, there were great challenges along the way. Some truly shit days, if truth be told, before eventually the entire stay unravelled altogether. I guess it all began with the outbreak of COVID and that initial week when we were scrambling around online thinking: “What the ***** is going on!?” 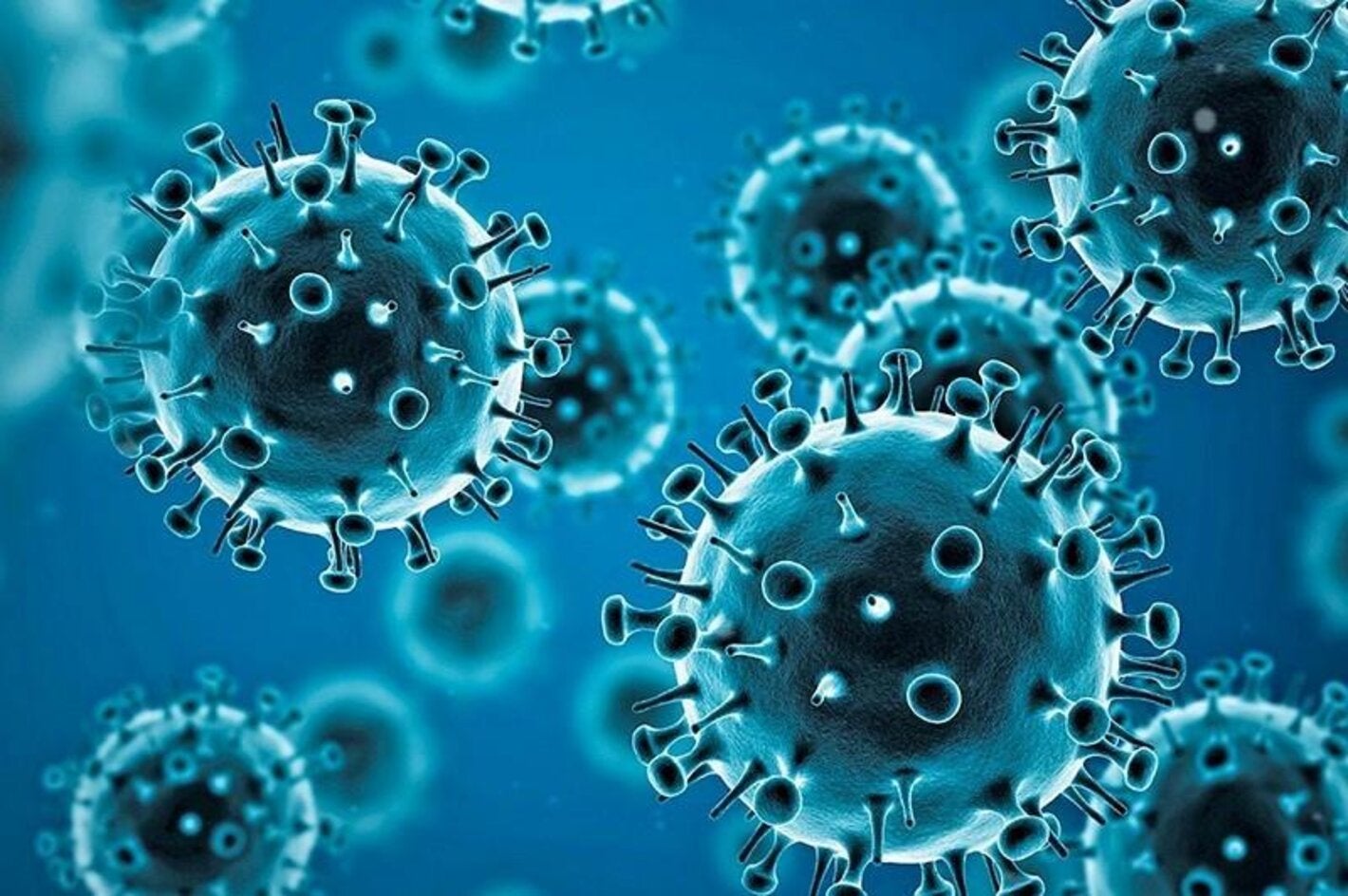 Then began what turned into an unprecedented serving of misfortune, beginning with a rogue mouse living in the apartment. It scurried around, scaring the shit out of Sladja. It pooped here and there too, before the caretaker set a trap and caught the poor thing. 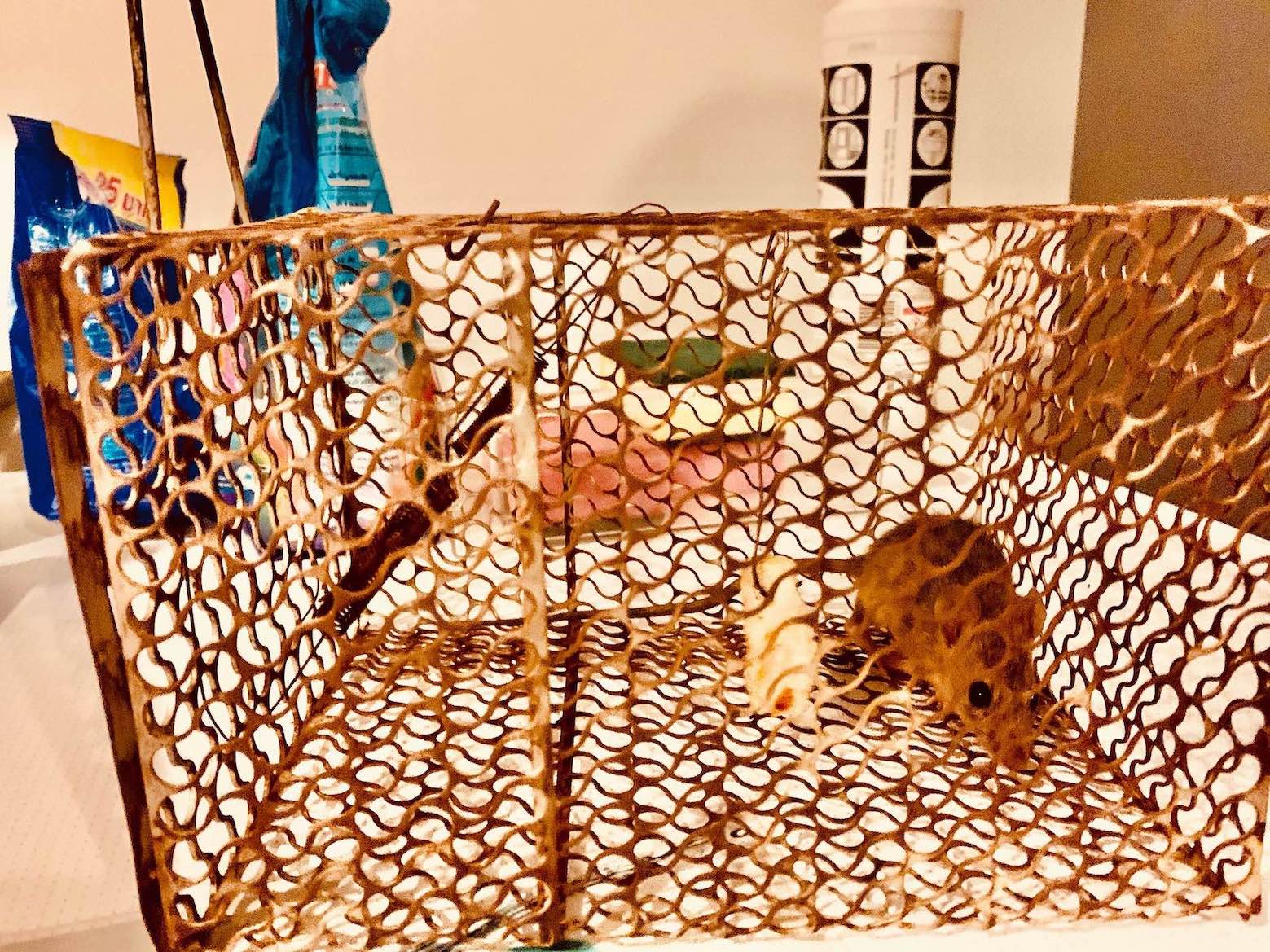 Next came an accident caused by the compound’s custodians. I had never liked the caretaker, if that was indeed his job title. He was one of the most dour men I’ve ever come across. He never once smiled, nor indeed was he ever moved to say good morning. Rather, he had this impenetrable blankness to him interspersed with the occasional scowl and glare. 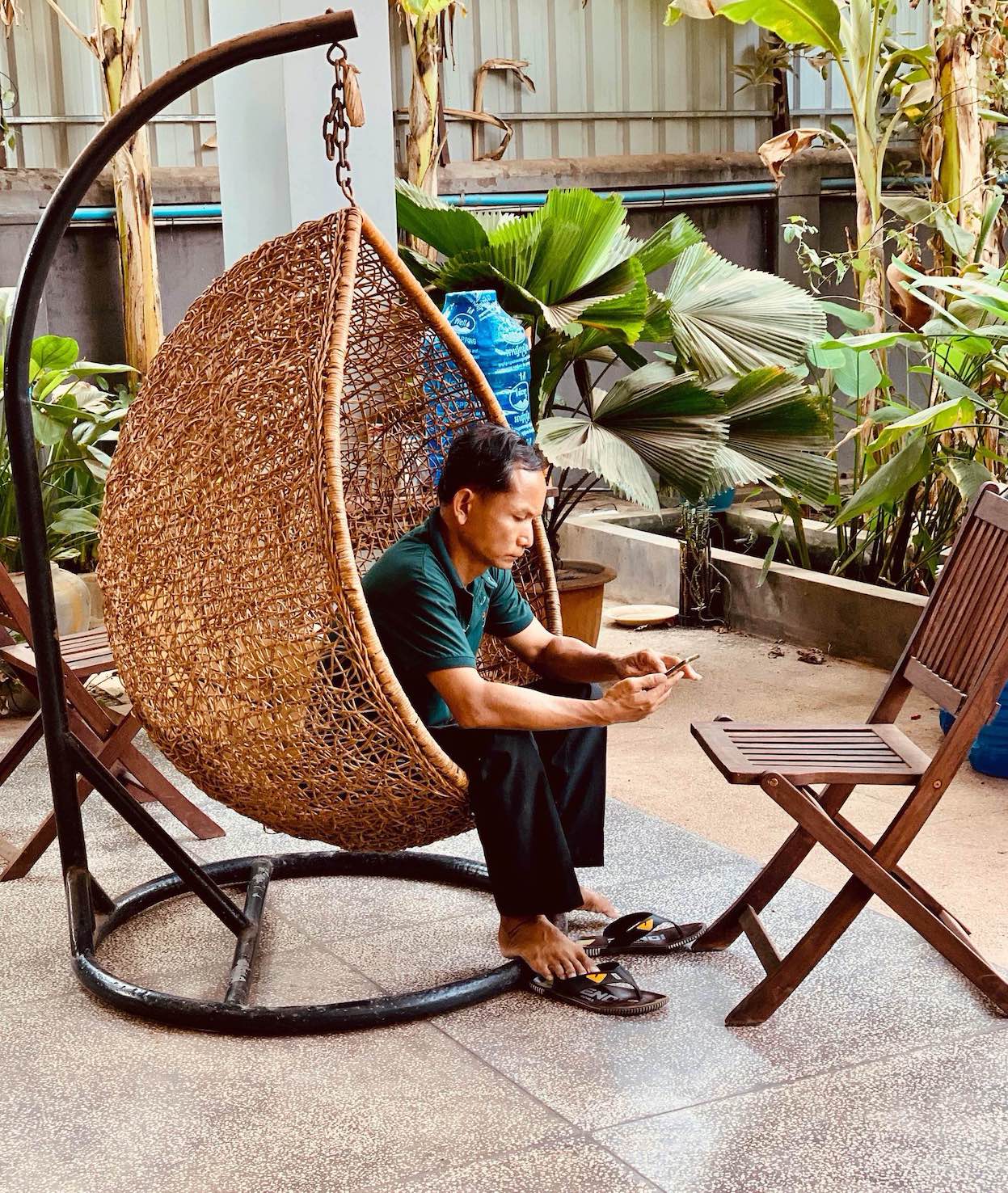 On a day to day basis he and the female cleaner would water all the plants in the courtyard and across the various floors. They often made quite a mess, with pools of water scattered around the landing and on the steps. 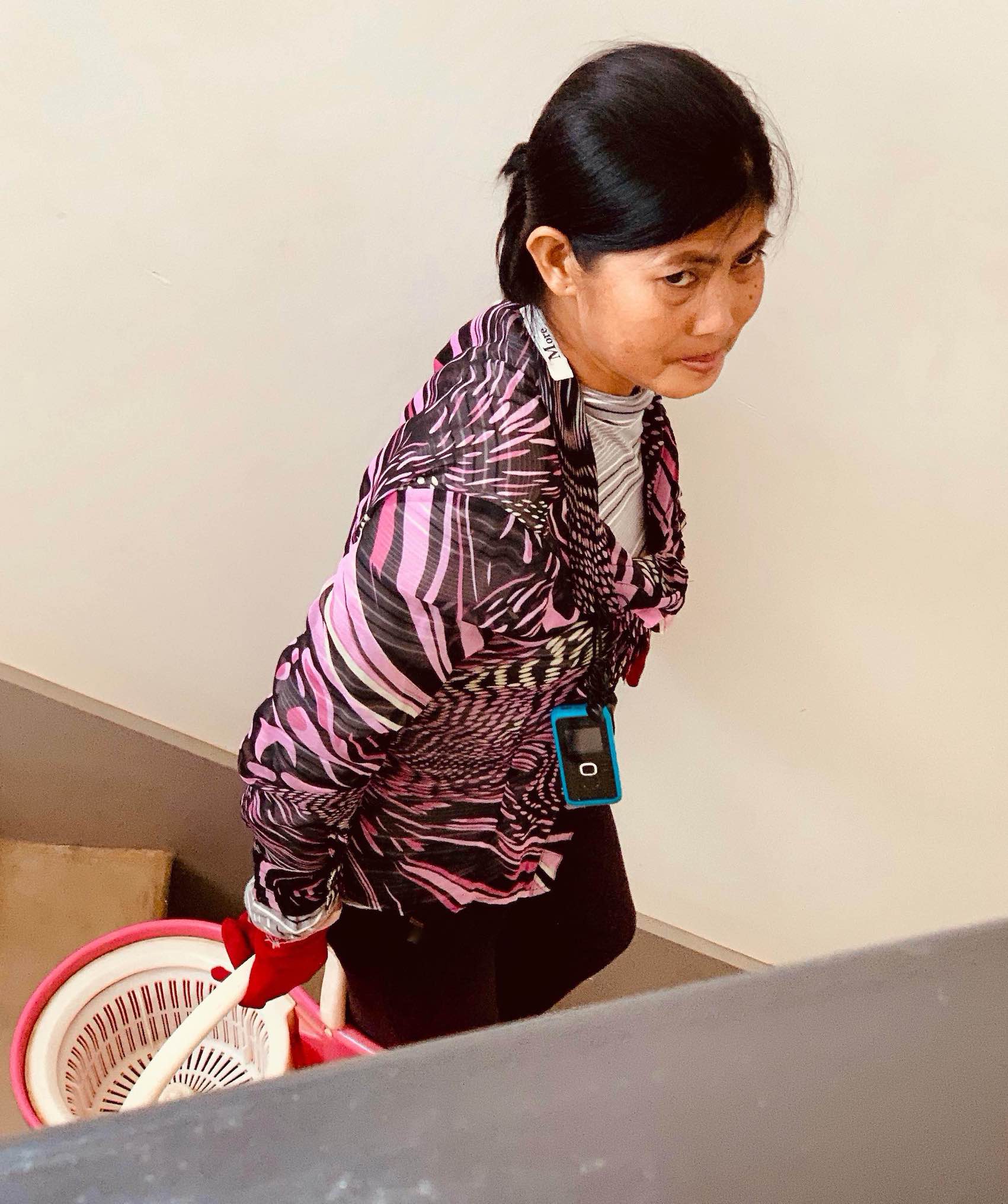 One day Sladja slipped on one such puddle and down she went, crashing into the stone staircase. She was in considerable pain for several days and left with an unsightly hematoma. Neither Chuckles nor Ms. Cleaner apologised for their negligence. 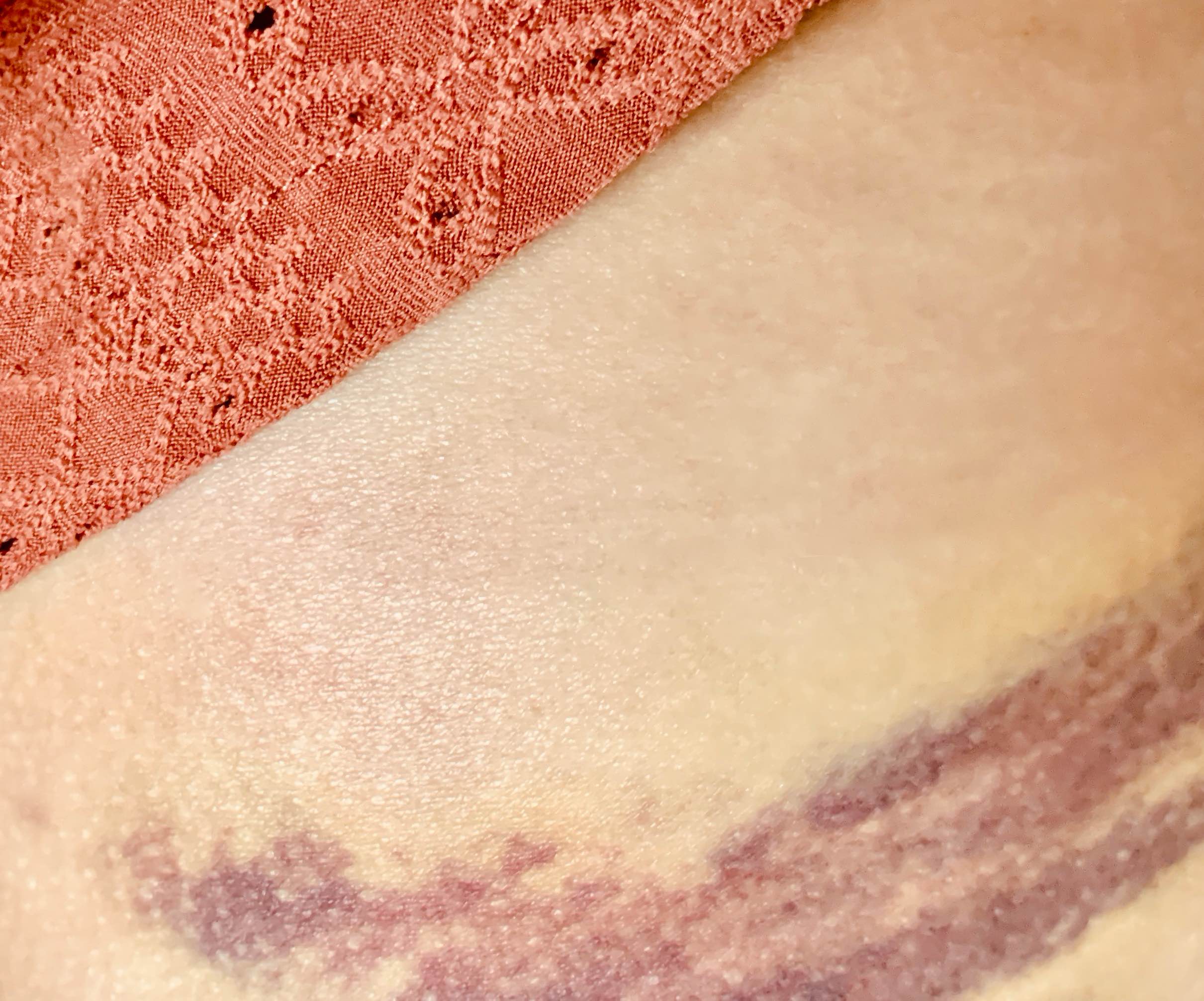 Unfortunately, there was worse to come with an injury of my own, though this one was self-inflicted. I’d been cooking a stir-fry for dinner when, suddenly, the pan slipped from my grasp and burning hot oil slid down the handle onto my finger. The subsequent burning pain lasted for days, a giant blister forming on my finger.

The initial healing process went on for the better part of a month. It was a full-time job keeping my finger treated, clean and protected from the elements. After a trip to the hospital it was confirmed that I’d sustained a second degree burn. What’s more, I had lost the ability to fully bend my finger. It wasn’t until I’d completed weeks of physical therapy in Belgrade, over a year later, that I got that flexibility back. 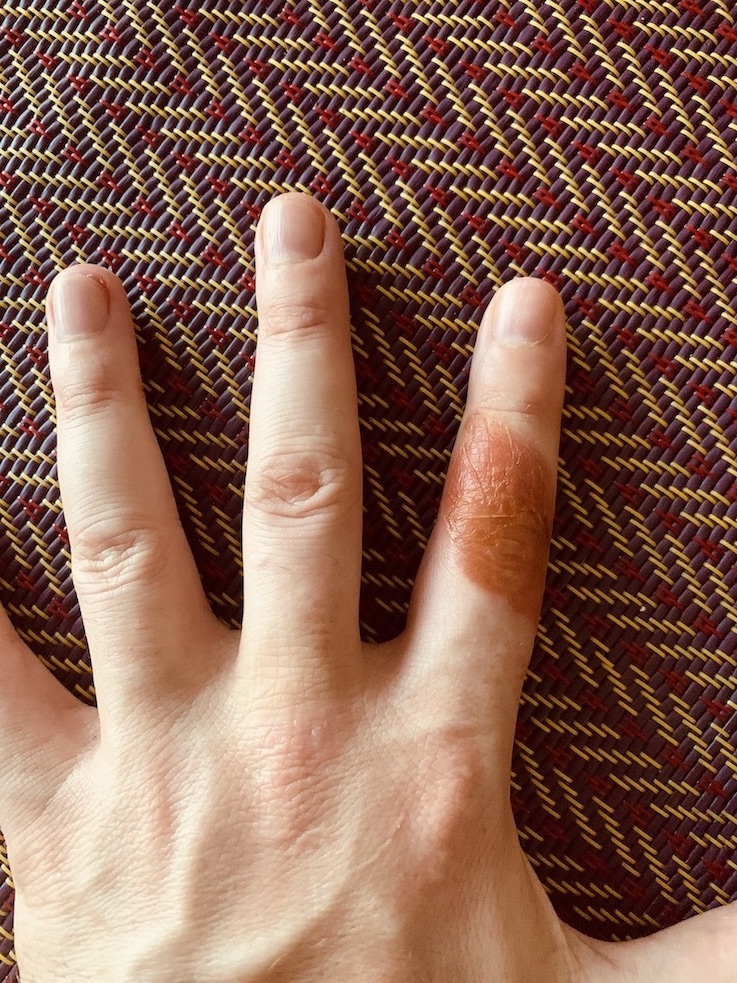 Somehow, unwanted visitors, gross negligence and freak accidents weren’t actually what caused us to vacate The Foster Apartments. As February gave way to March, daily temperatures became stifling. Soon, we realised that our single air con unit, coupled with the apartment’s open plan design, just wasn’t cutting it. Even with an additional large fan pointed at us, it was becoming unbearable.

Then the damn thing broke down altogether and we were left with our one fan. I truly hesitated in including this next photo. But hey, in the name of a solid blog, I just couldn’t leave it out. A picture speaks a thousand words eh? Hope this hasn’t put anyone off their dinner. 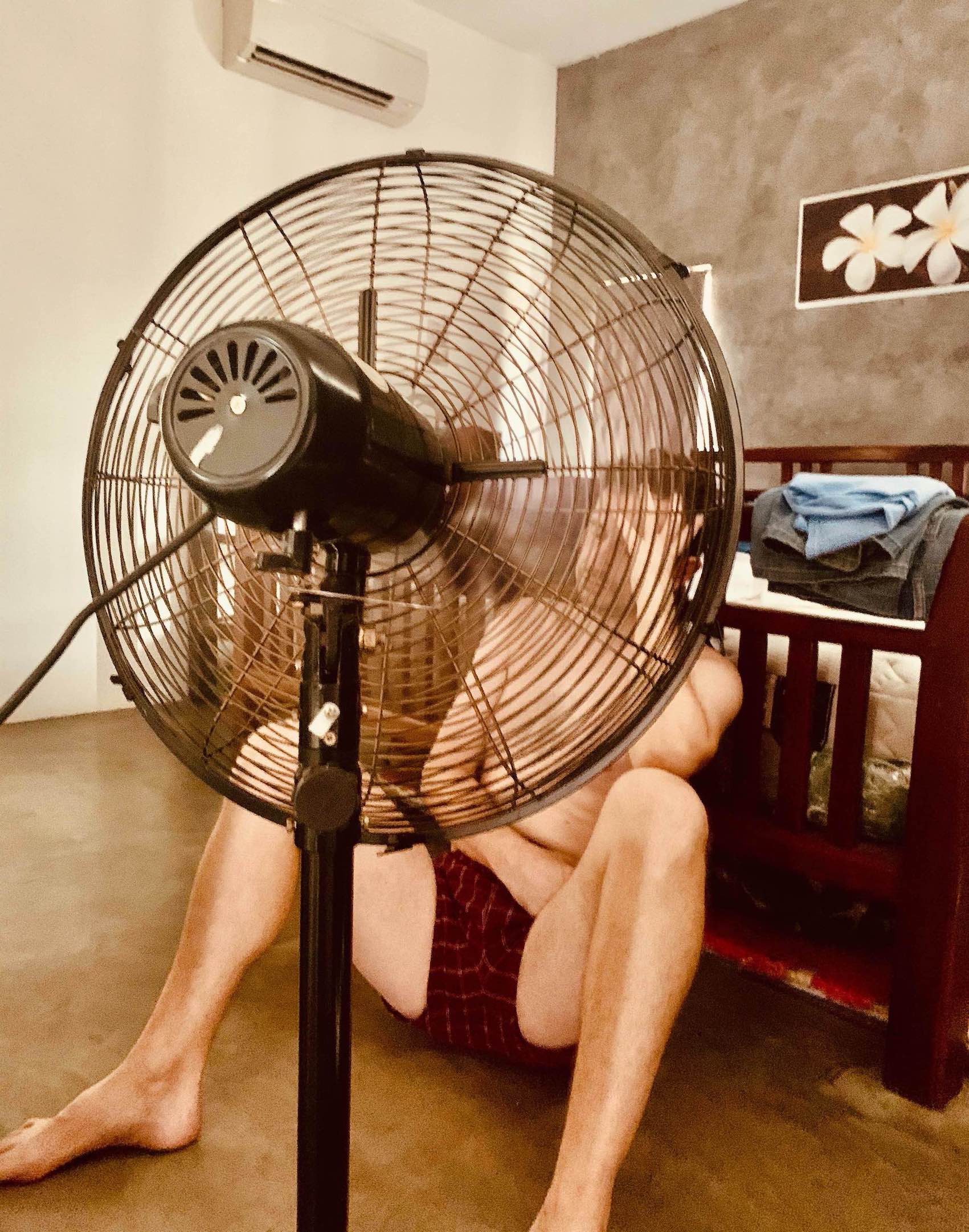 After a really dreadful day or so Chuckles and a workman came and fixed the unit. With a huge sigh of relief, we returned to being generally hot and bothered as opposed to gasping for breath. 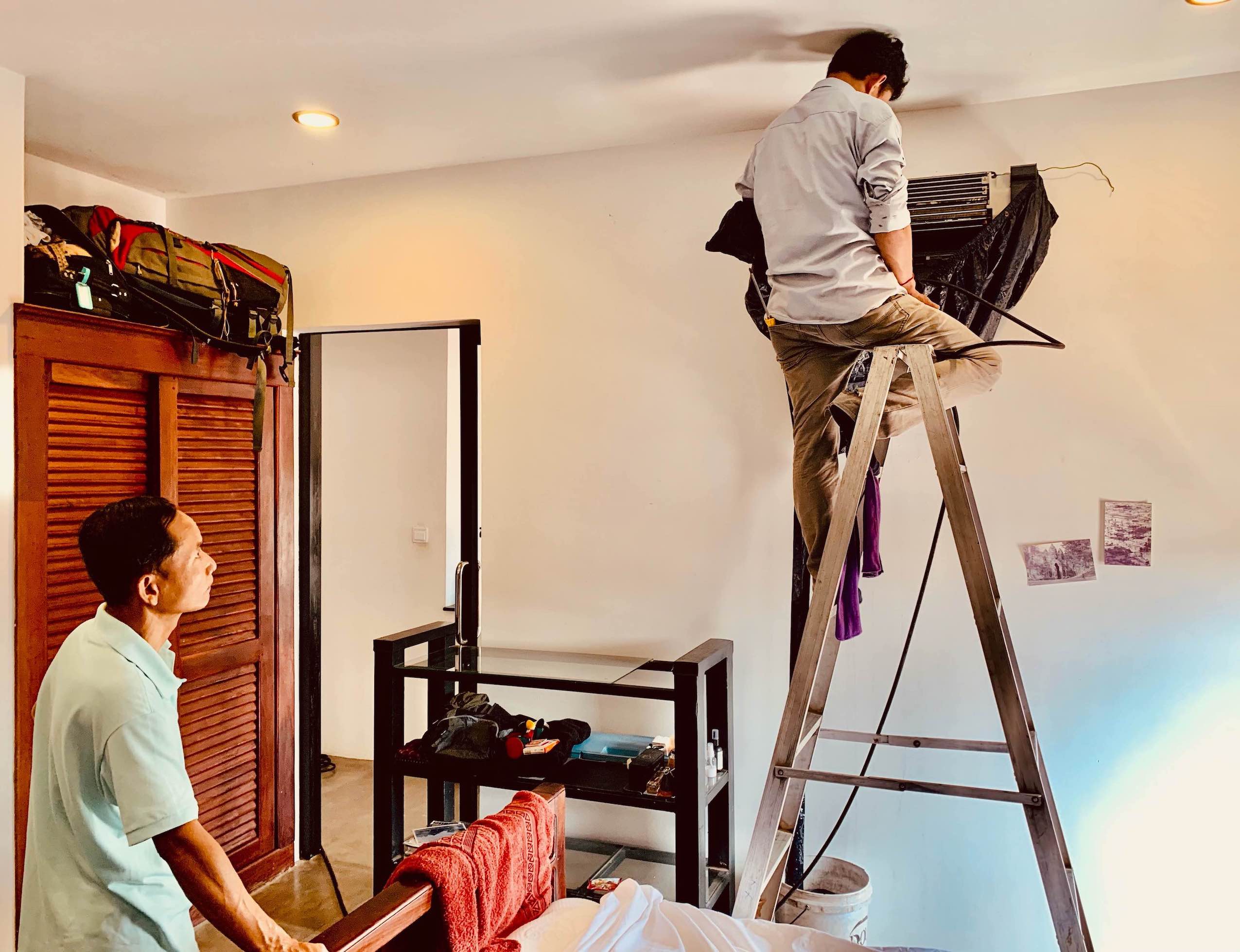 If we thought this was as bad as it could get, we were sorely mistaken. Because next came the power cuts. Oh dear lord, the power cuts. They lasted for hours, leaving me to teach classes by torchlight on shaky 4G. Frankly, it was a miracle I never got an official warning from Palfish. I’m sure neither Sladja nor I will forget lying awake in bed at 2am sweating buckets. 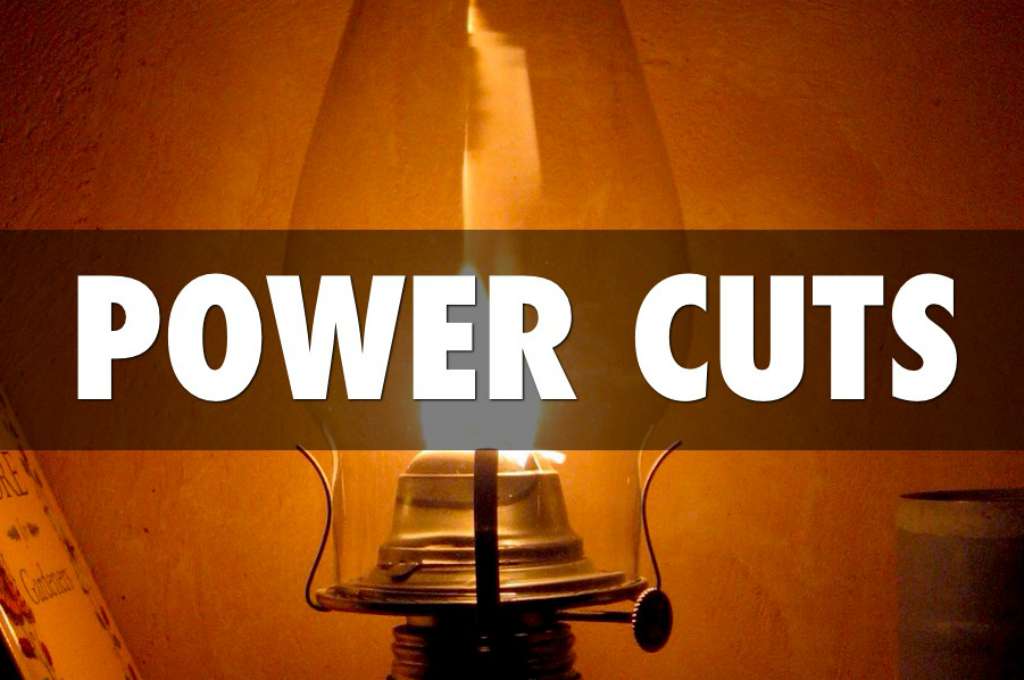 Sadly, unlike some apartment complexes in Siem Reap, the building had no generator to fall back on. Hence we agreed that it was definitely time to move on. The COVID crisis was deepening and we needed a comfortable place from which we could monitor world events. Somewhere we could stay cool and I’d be able to continue teaching on dependable WIFI. Hey, maybe even throw in a swimming pool. Luckily, Siem Reap had no shortage of options. 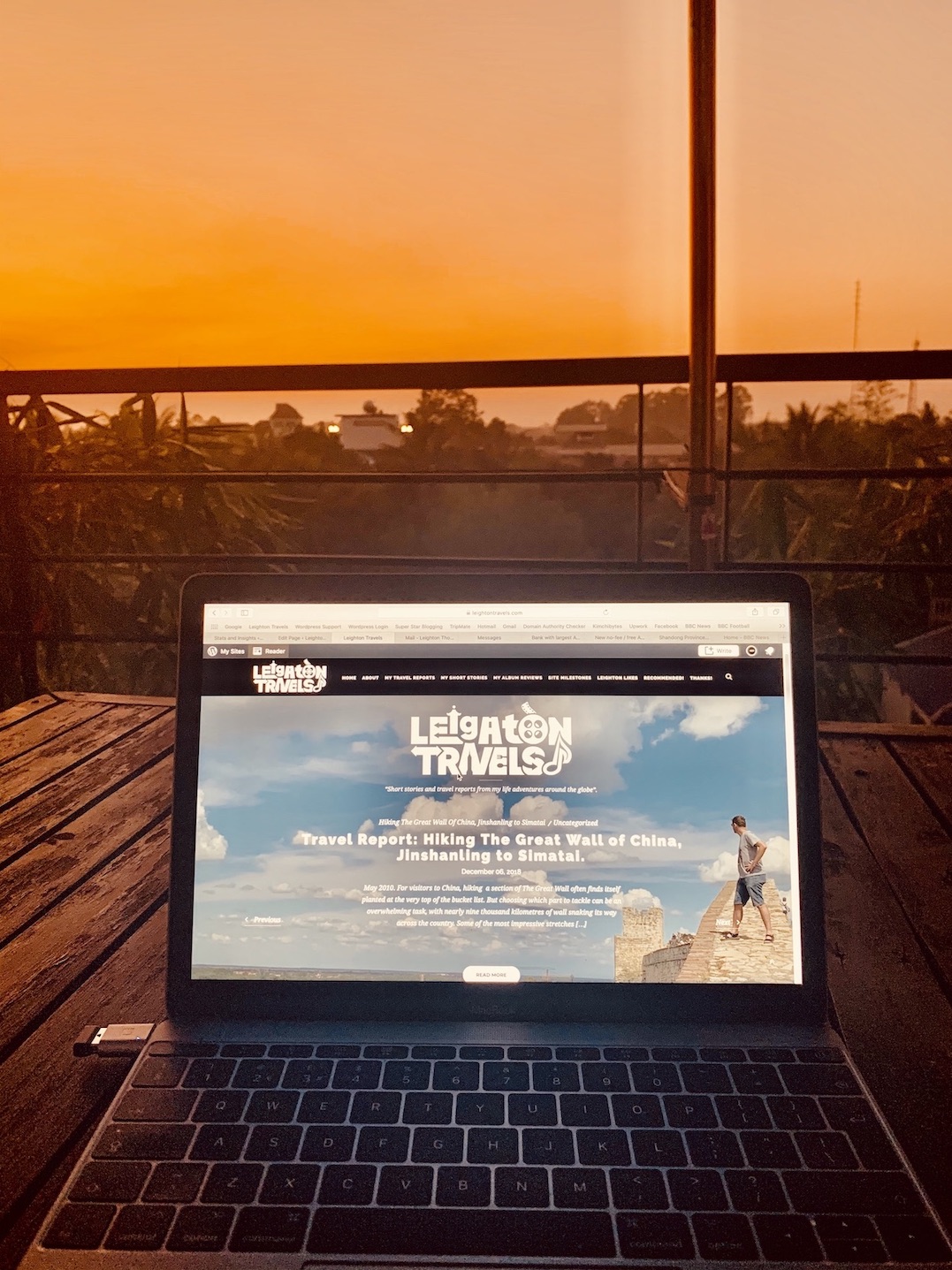 And so it was, one humid March afternoon, that we left the Foster Apartments. Loading up a tuk-tuk with our luggage, we clambered in and set off down Siem Reap’s dusty roads towards our new home. 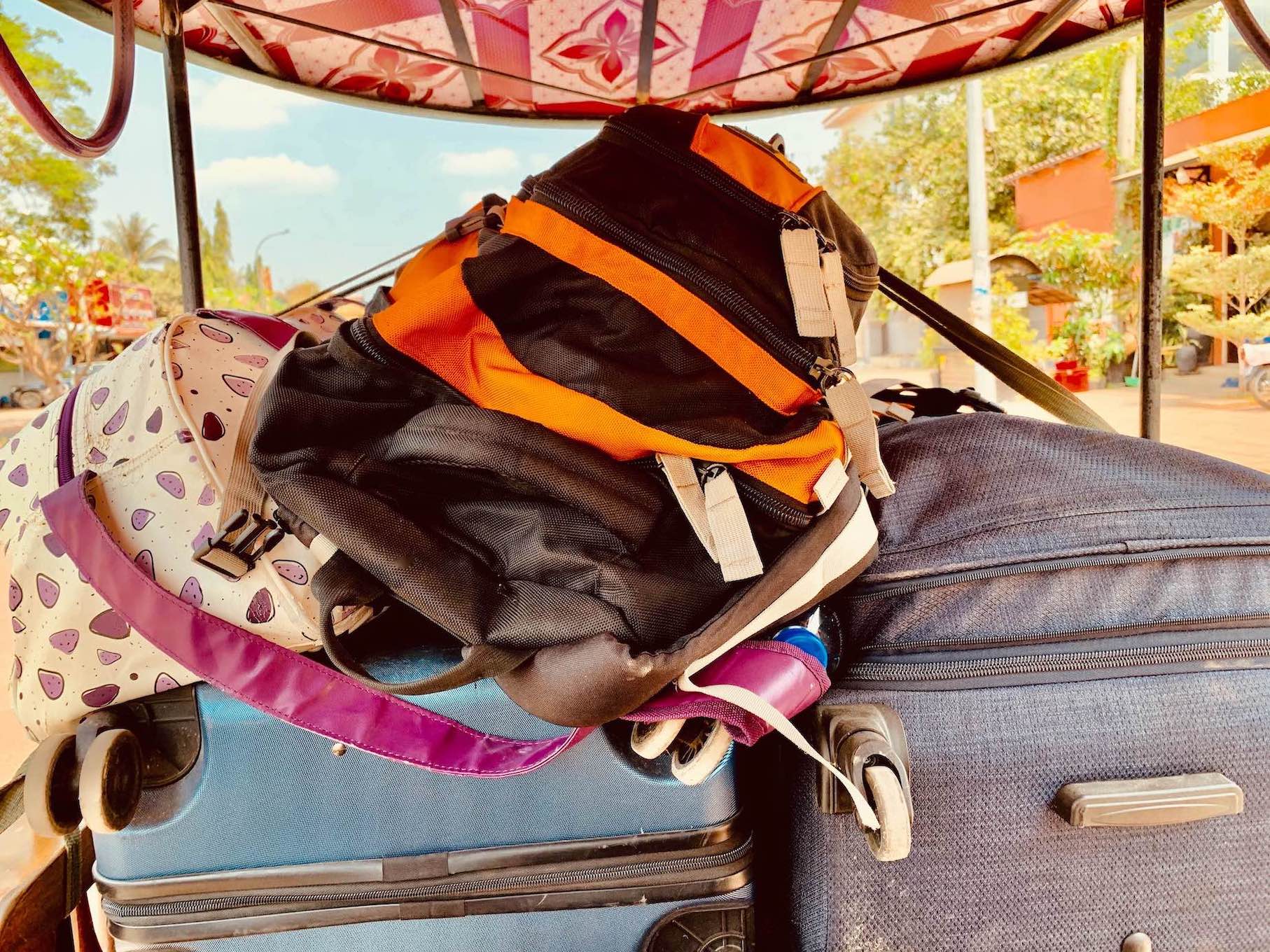 For more on accommodation in the city, take a look at my guide on Where to Stay in Siem Reap.

For a look at Siem Reap’s excellent cafe, restaurant and bar scene, check out my detailed guide on Where to Eat and Drink Siem Reap.