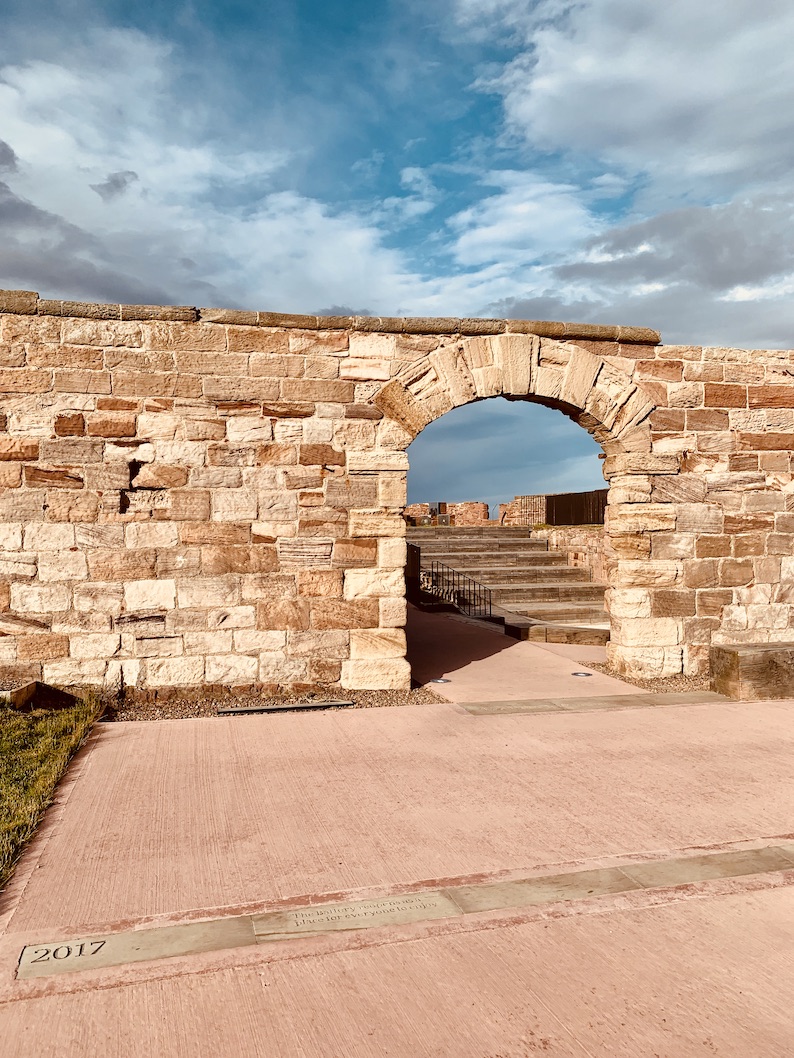 May 2019. The historic Scottish town of Dunbar once had a grand defence bastion situated on an elevated section of the harbour on Lamer Island. It was built in 1781 during the American War Of Independence to protect the town from the fearsome naval captain, John Paul Jones. The defence post was called Dunbar Battery and, after a long and tumultuous history, it finally fell into disrepair in 1937. 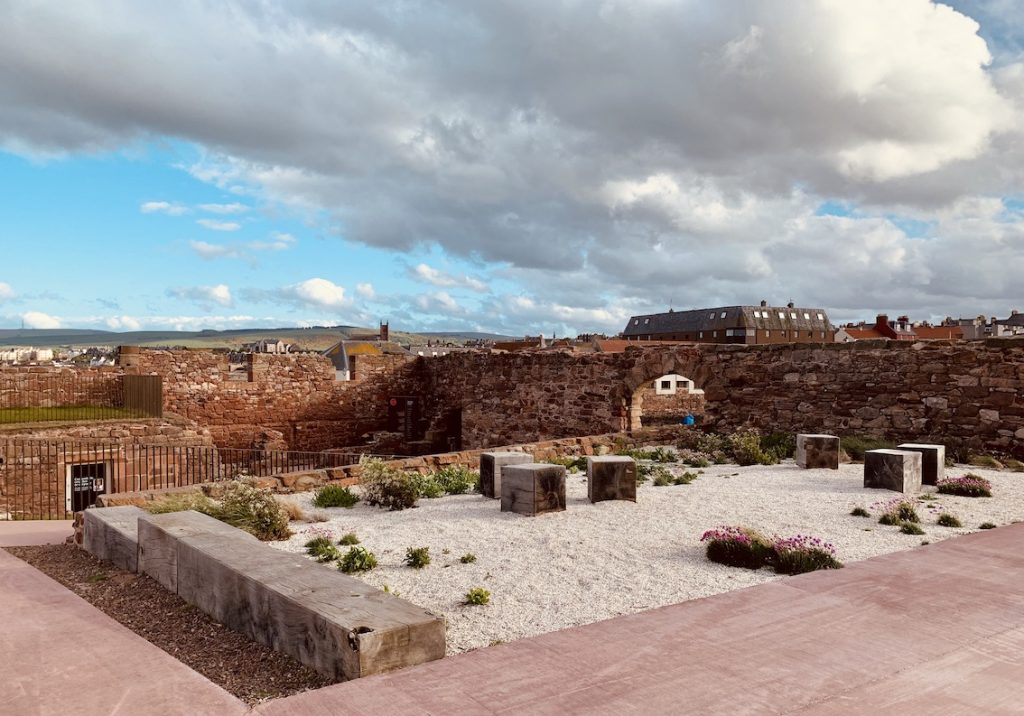 It wasn’t until 2016 that a huge restoration project kicked off to bring new life to Dunbar Battery. The project was managed by Dunbar Harbour Trust, who repaired sections of the original stonework, carried out an archaeological search and implemented public access. 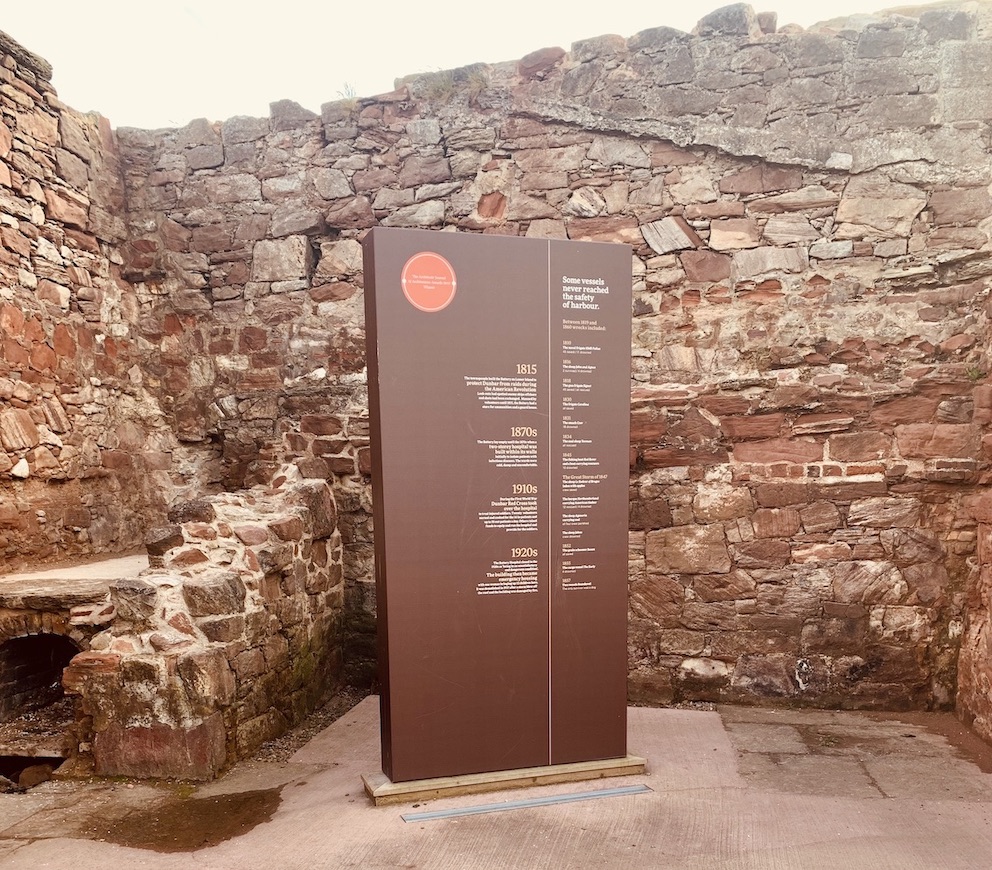 A historical overview of Dunbar Battery.

They also did a great job adding information panels throughout the new site. Following its days as a battery, the site became a hospital for infectious diseases in the 1870s.

Later, during World War I, The Red Cross moved in and set up a medical centre to treat injured soldiers. The grounds also served as an emergency housing complex for the poor and destitute. 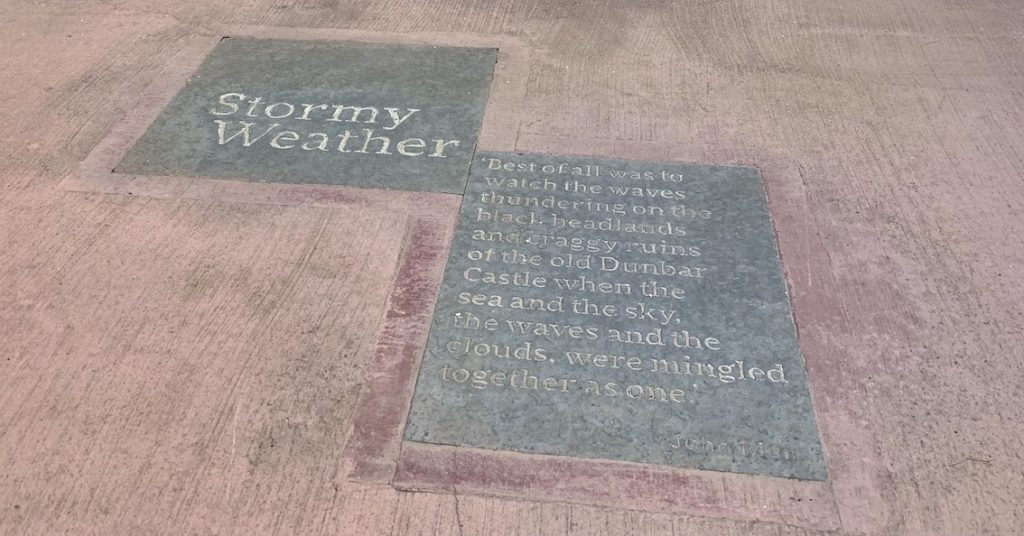 Another tasteful touch are the stone panels quoting Dunbar-born naturalist and writer John Muir, who would often come here to escape the abuse of his family and school life. The extract comes from his 1913 memoir The Story of My Boyhood and Youth.

“Best of all was to watch the waves thundering on the black headlands and craggy ruins of the old Dunbar Castle. When the sea and the sky, the waves and the clouds mingled together as one”. 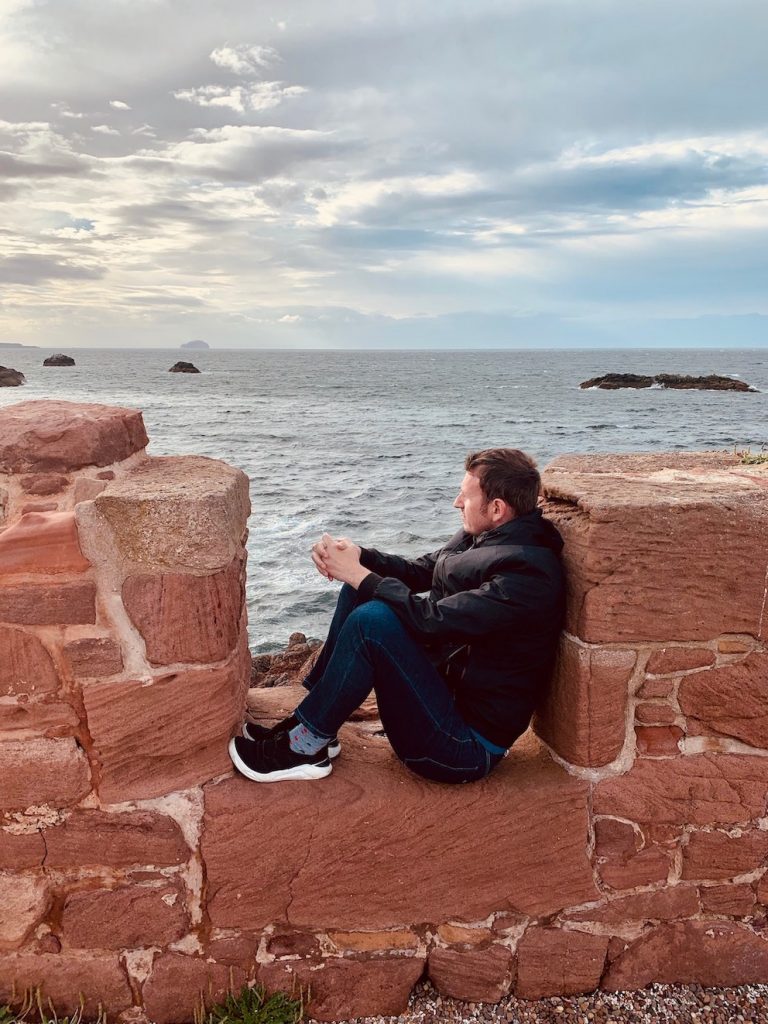 One of several viewpoints from Dunbar Battery.

John Muir’s wistful words inspired me to check out the views for myself. Subsequently, I found this beautiful spot, one of many perches scattered around the restored battery. From here you can see a few of those thundering waves and enjoy dramatic views over the harbour, town and castle. 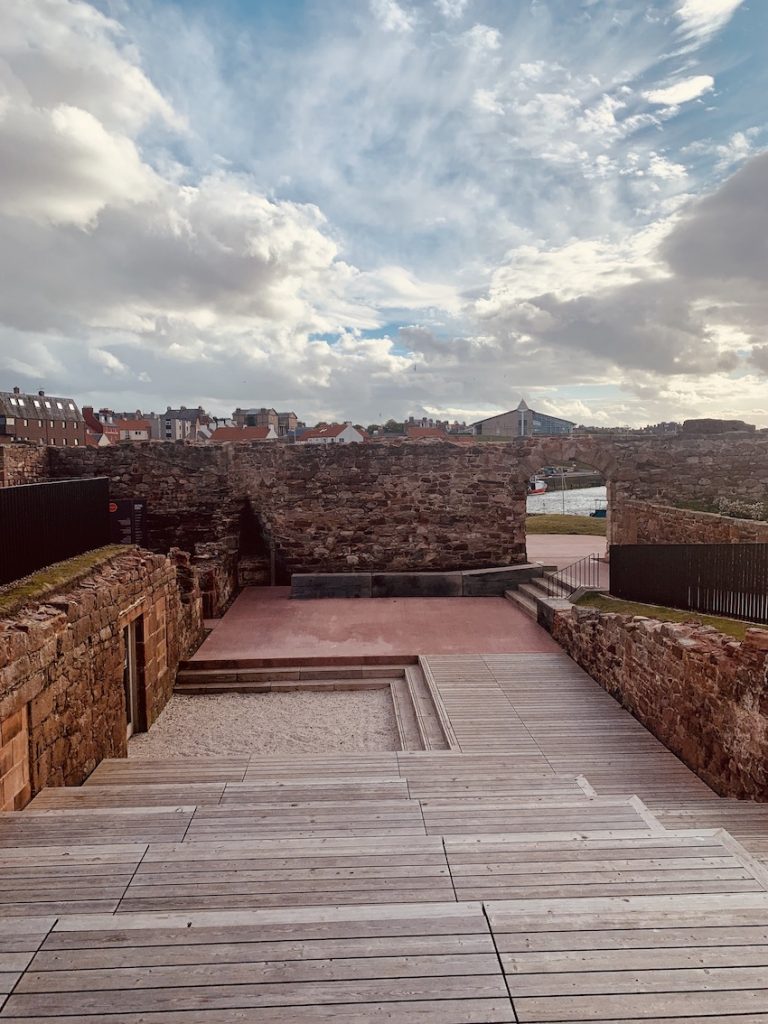 However, Dunbar Battery doesn’t simply pay tribute to the past. It’s main feature is this intimate amphitheatre, which allows for local performances and gatherings. Hence this hugely historical site now serves as a focal point for the town’s present and future. To find out more about the events here, head to dunbarbattery.org. 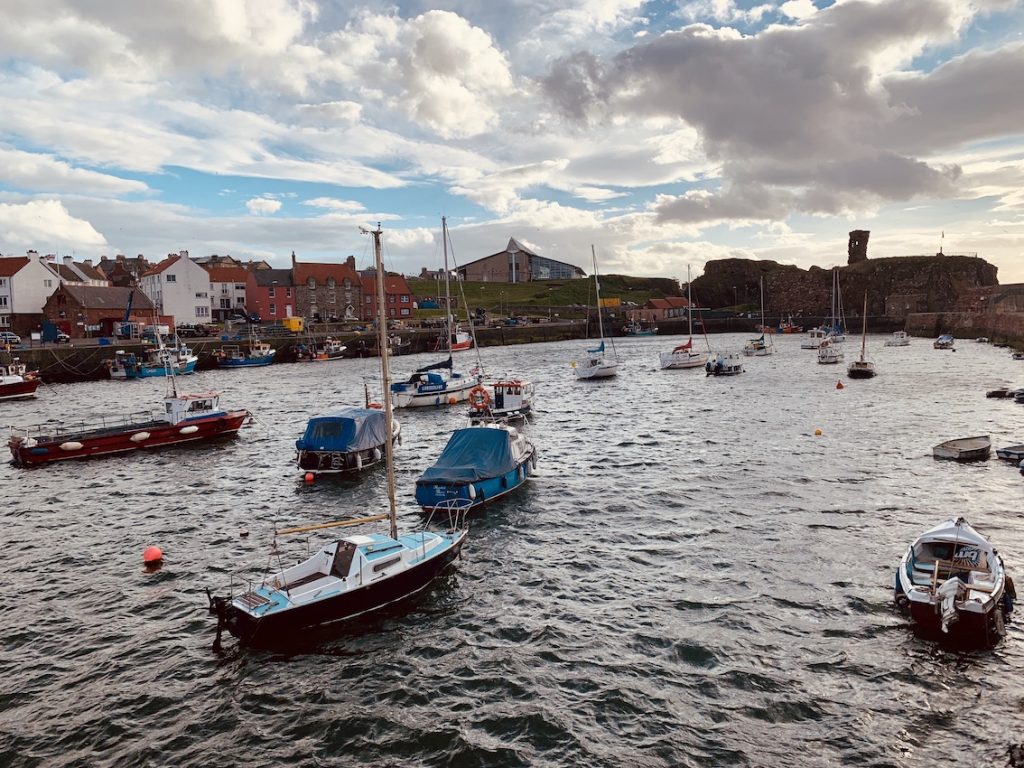 It won’t take you more than ten to fifteen minutes to tour Dunbar Battery. After you’re done, just head back down the entrance slope and onto Victoria Harbour for the short walk down to those Dunbar Castle ruins John Muir talked about. Dunbar’s harbour is picture perfect and home to a number of sailing, rowing and diving clubs. 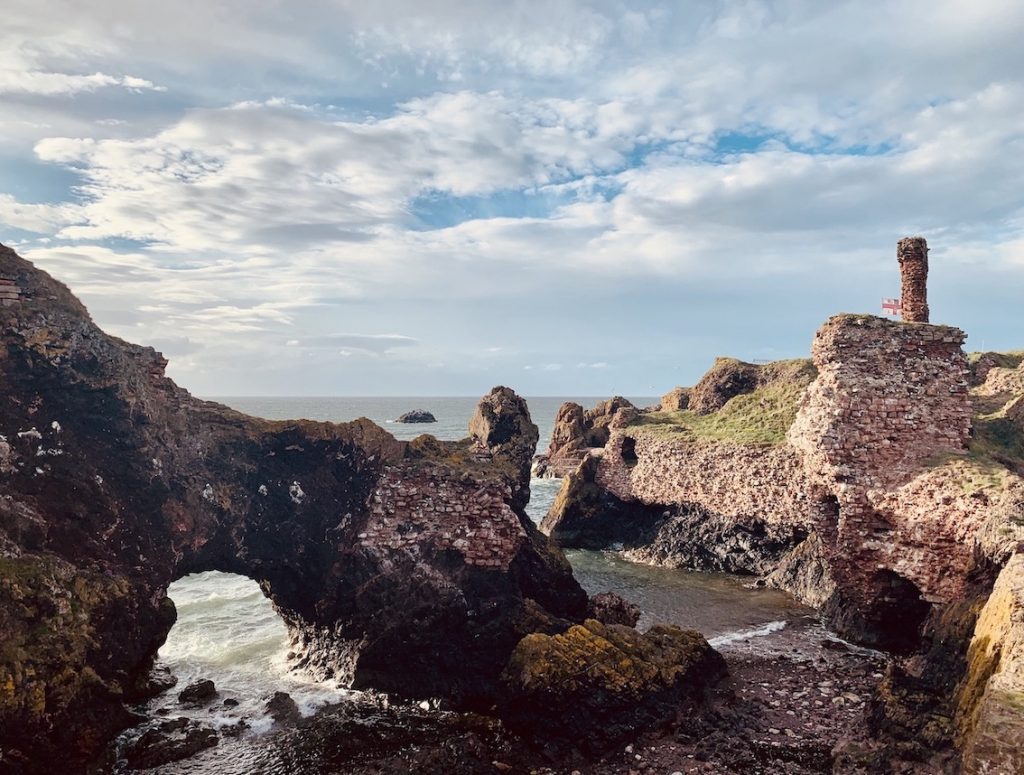 The ruins of Dunbar Castle.

You can’t access the ruins of Dunbar Castle anymore. Which is just as well, as it gets pretty dangerous down here due to unpredictable tide trends and weather conditions.

Built in 1070, this was once Scotland’s strongest fortress before meeting its demise in 1567. For more on the castle’s long and complicated history, Wikipedia is good starting point.