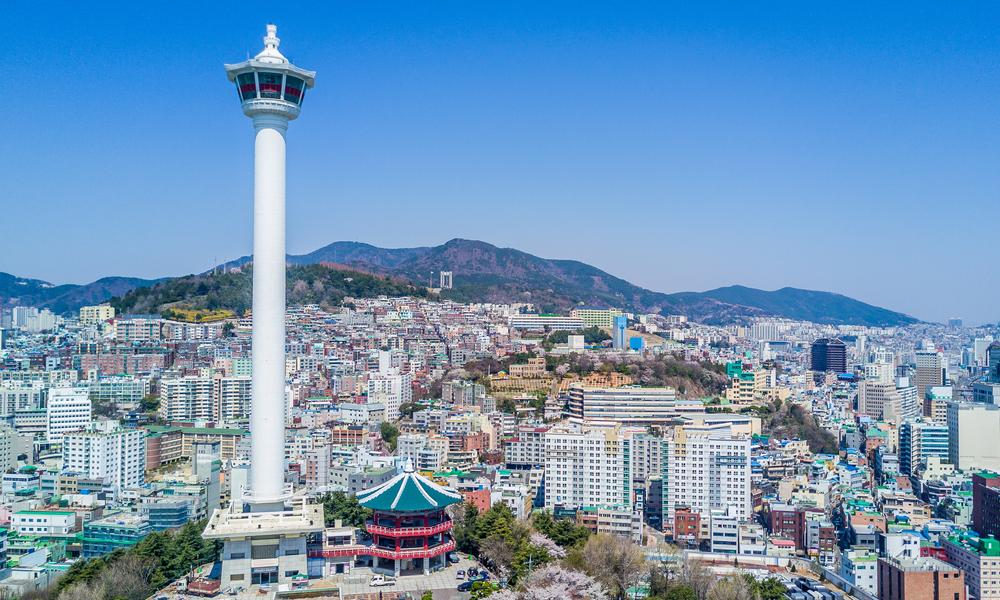 February 2015. Back before my blogging days, I wasn’t half as organised as I am now. As a result, I was nowhere near as prolific with my explorations. For the most part, I would visit new cities and towns simply by following my nose.

Sometimes this organically led me to the most interesting sights. Other times, my aimless wanderings proved less fruitful. In Busan, my random expeditions led me to some wonderful places, such as Haeundae Beach, Jagalchi Fish Market, The UN Memorial Cemetery and Muse On Vinyl Bar. In this article, I roundup the rest of my trip, with some Cool Spots Around Busan. 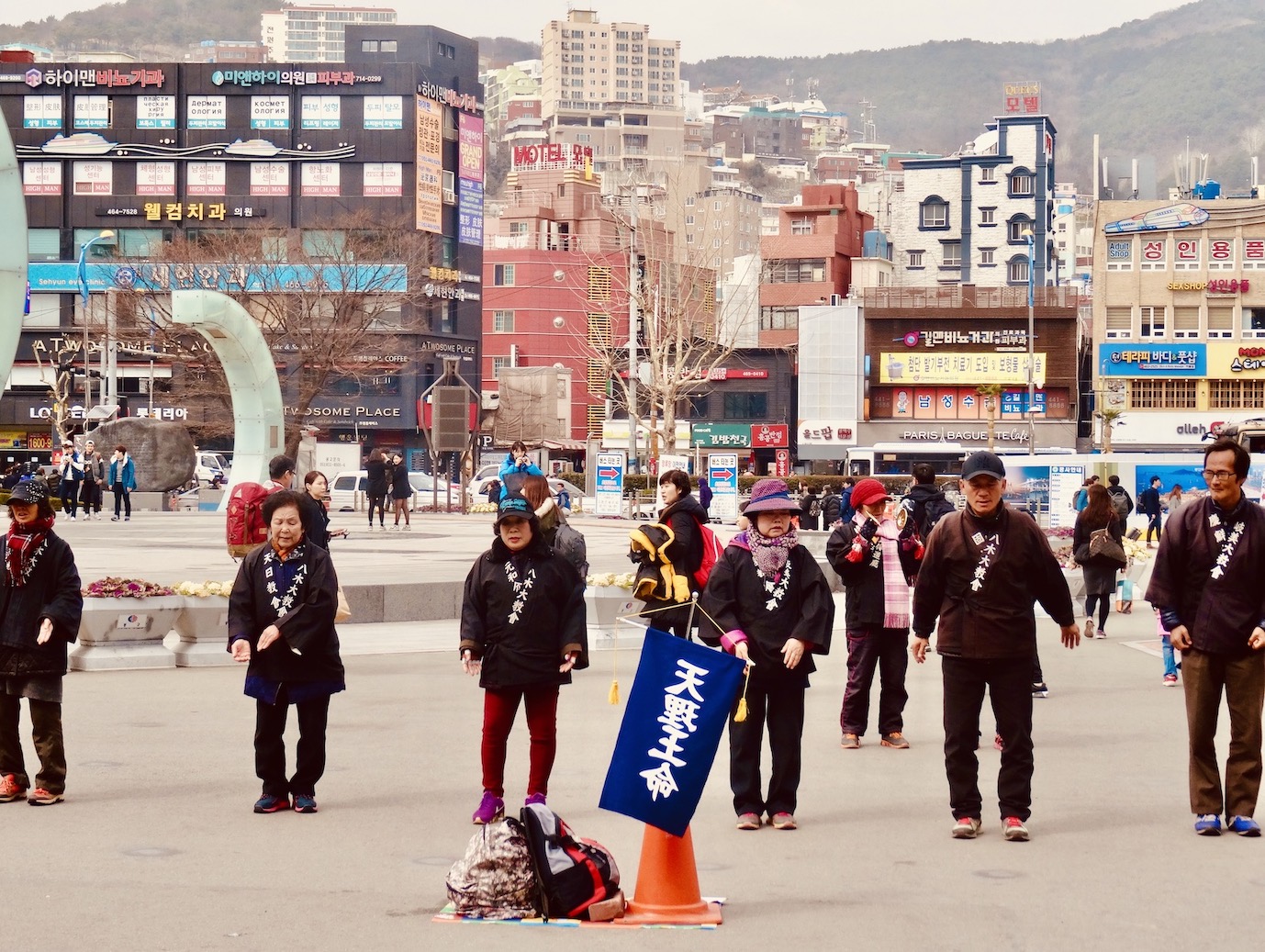 You might not think of a train station as a major city sight. But in Busan, you can often see local music and art performances at the large Train Station Square. During my visit, I came across a group of women dancing to traditional Korean music.

With slow, exaggerated moves that seemed more like stretching than actual dancing, these kinds of performances are mostly enjoyed by middle-aged or retired women. Square dancing gives Korean seniors an increased sense of purpose and community. In fact, this type of dancing has become so popular they even have regional and national competitions across the country! 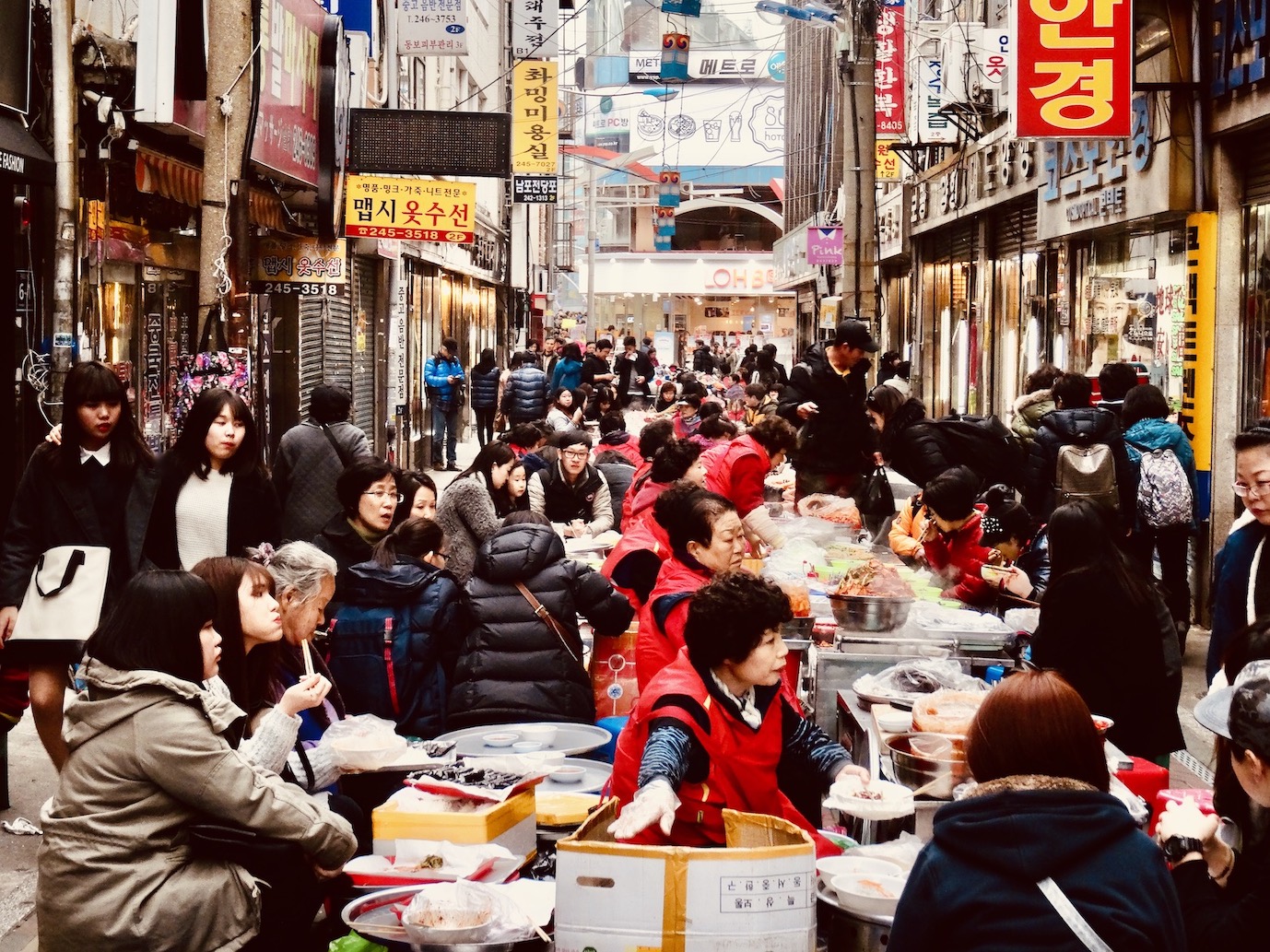 Busan is a foodie’s wet dream. The city literally bursts at the seams with bakeries, cafes, hot pot joints, barbecue restaurants and a decent range of western eateries. And then you’ve got the street markets! Colourful and chaotic, these are the places to come for the freshest, most wallet-friendly traditional food in the city.

One afternoon I took a wander through Gukje Market, distinctive for its red-jacketed, female food vendors. The market sprang up in 1950 during The Korean War as a space in which refugees could exchange goods. Today it’s the largest street food market in Busan. A place where, prior to COVID-19, vendors packed their customers into free spots at back-to-back plastic chairs and tables. 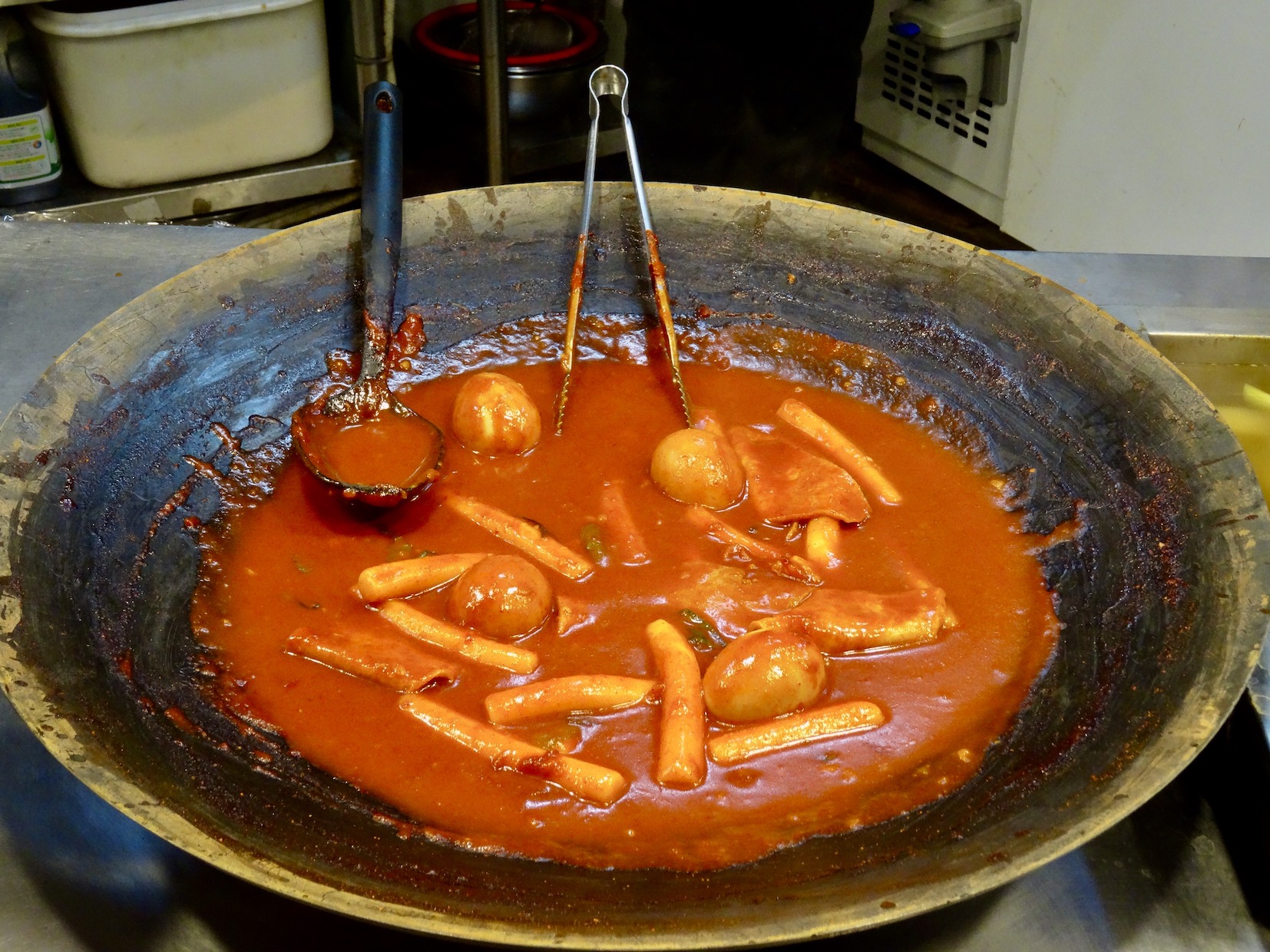 Determined to try something wacky, instead of a standard noodle or rice dish, I took a chance on a bowl of piping hot Tteokbokki. This highly popular Korean street food dish is a soupy mass of cylinder shaped, stir-fried rice cakes, served in a creamy soy sauce. While I can’t say I loved it, I certainly have no regrets. An… interesting dish! 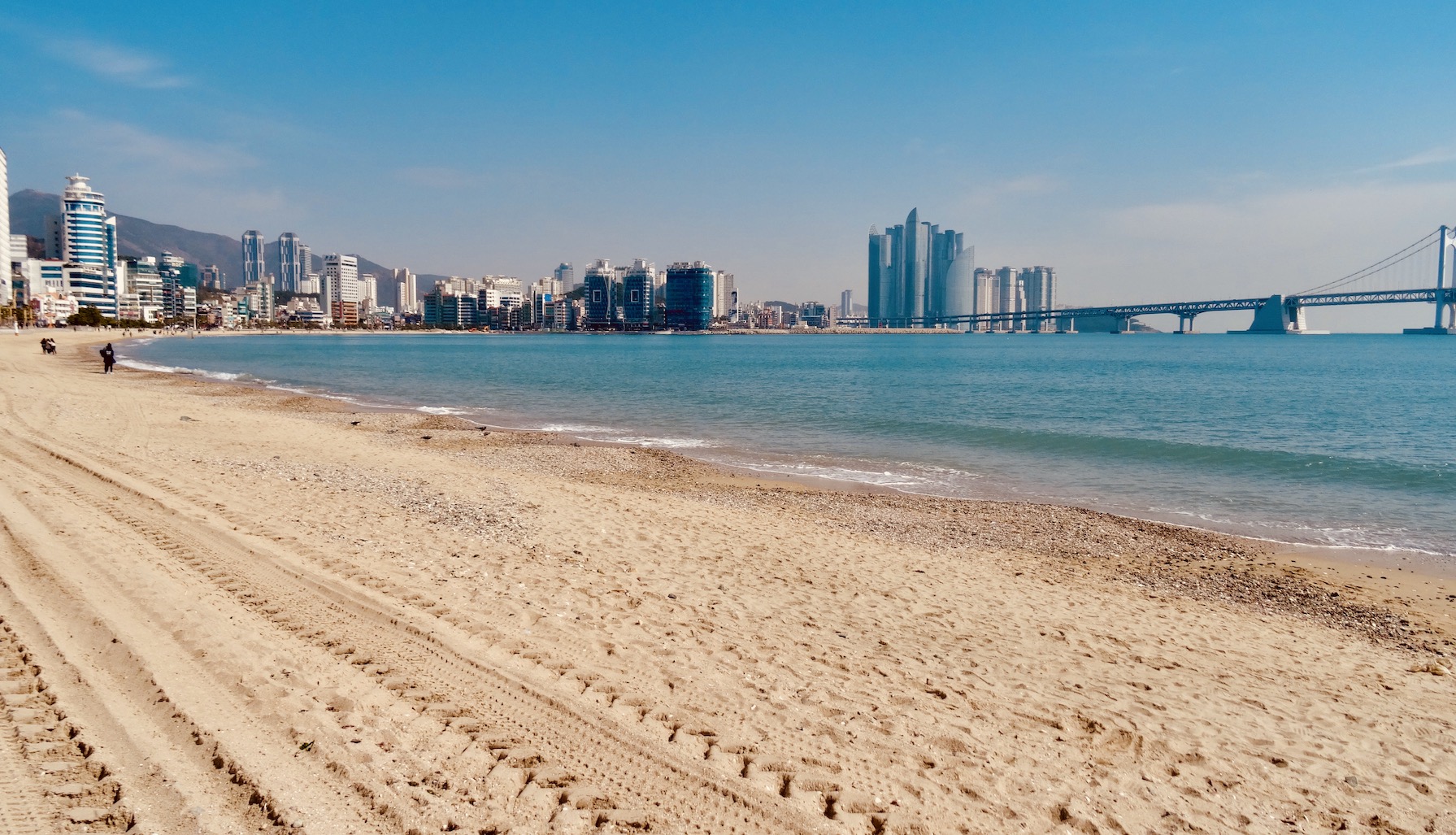 After my visit to Haeundae Beach, I was keen to see how Busan’s other, apparently less-loved city beach, compared. Actually, I found Gwangalli Beach to be every bit as handsome, especially due to its location inside a beautiful cove. Moreover, it was really peaceful that afternoon as I negotiated all 1.4 kilometres of its fine sands. 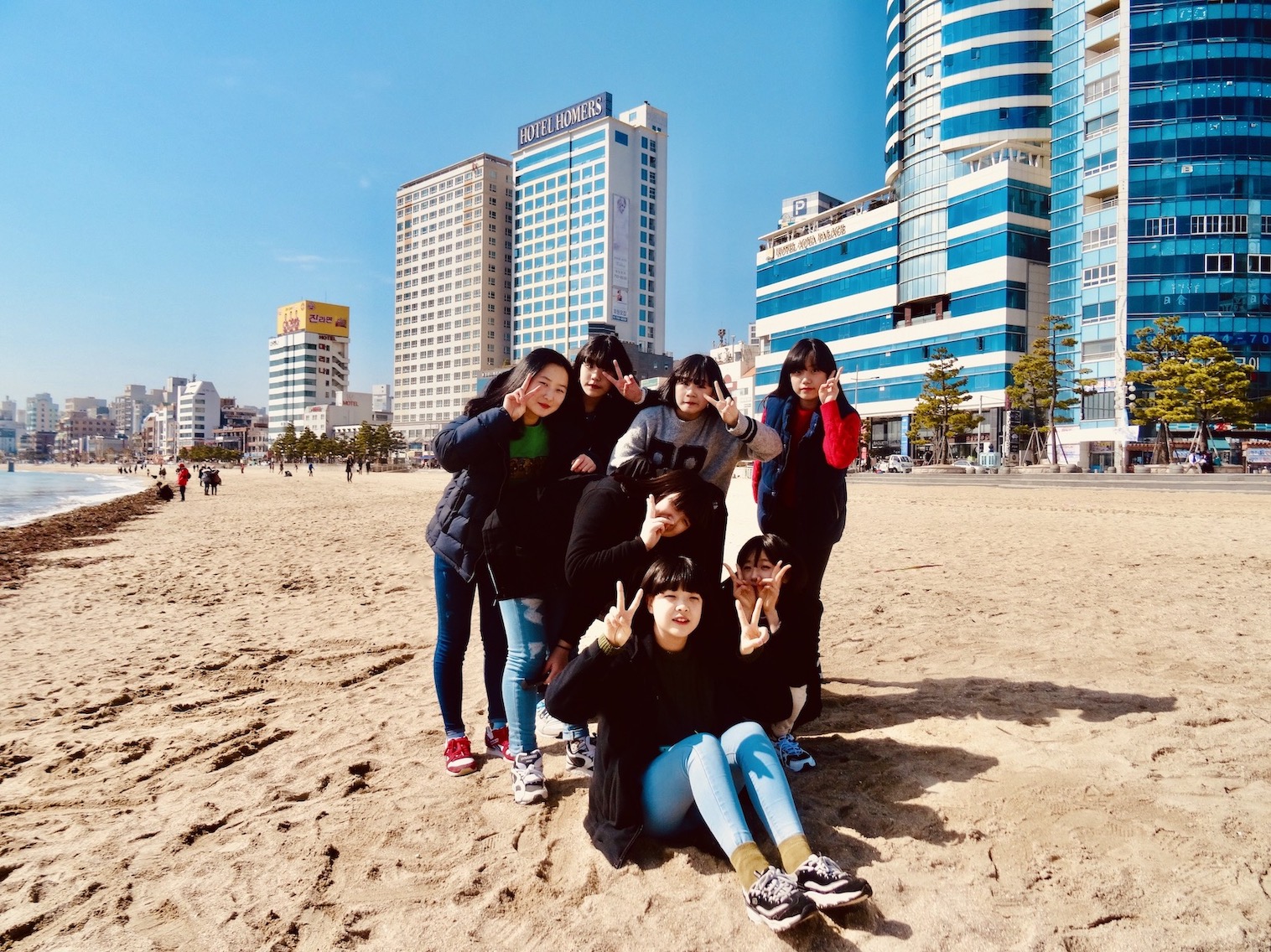 Eventually, my beach plodding brought me to a passing gaggle of teenage girls. They were very surprised to see me, thus they stopped for a chat, asking all the usual questions. “Sure!” they cried, when I enquired about a group photo. 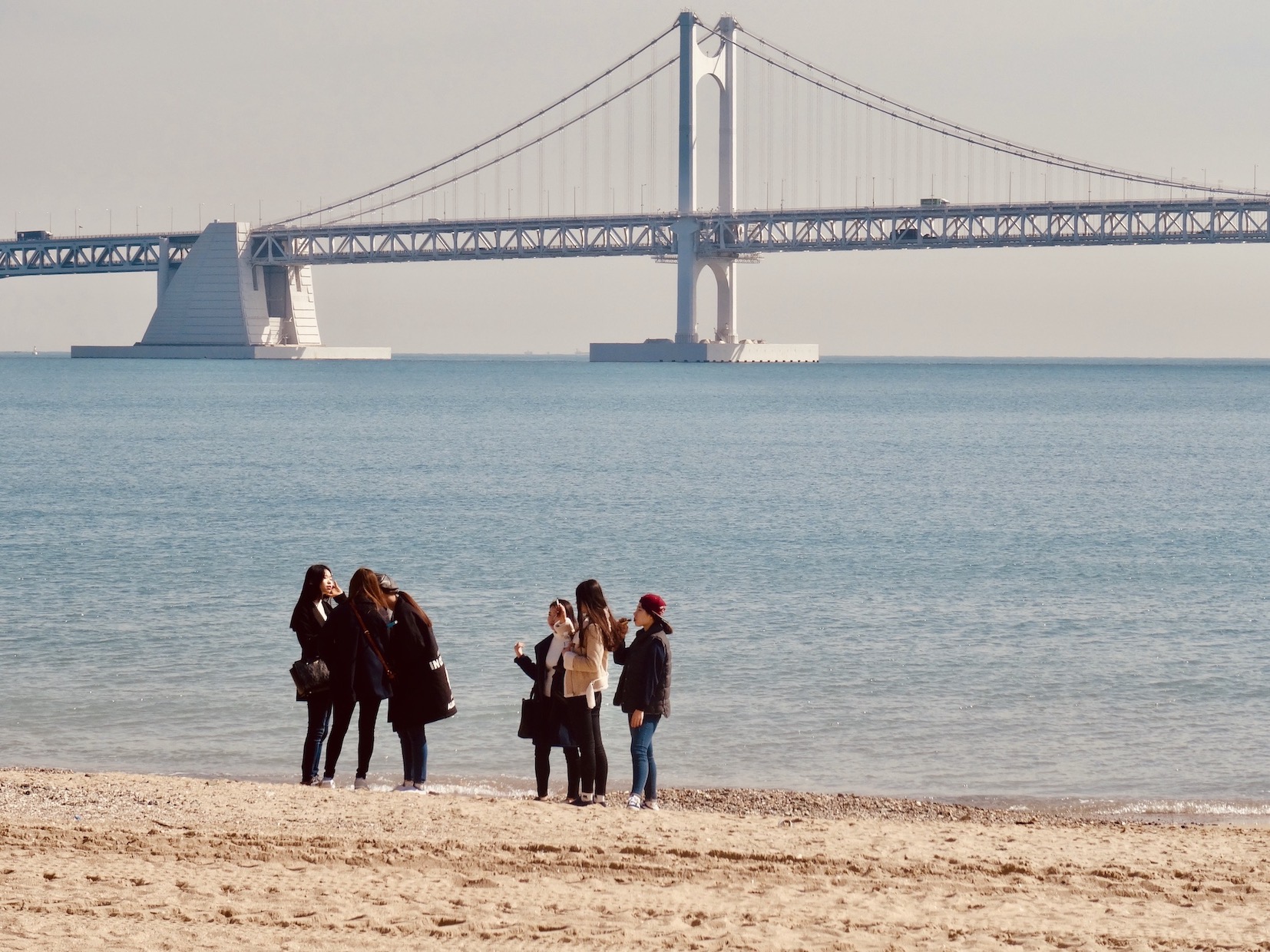 The impressive, half moon shaped Gwangan Bridge spans the cove as the largest Korean bridge over the Sea of Japan. Nearby, one can visit Busan Yachting Centre, which hosted a number of sailing events at the 1988 Summer Olympics.

The neighbourhood around the beach is really fancy, with several five star hotels and luxury apartment blocks. In 2018 Hollywood director Ryan Coogler shot a car chase scene around Gwangalli Beach for the blockbuster movie Black Panther. 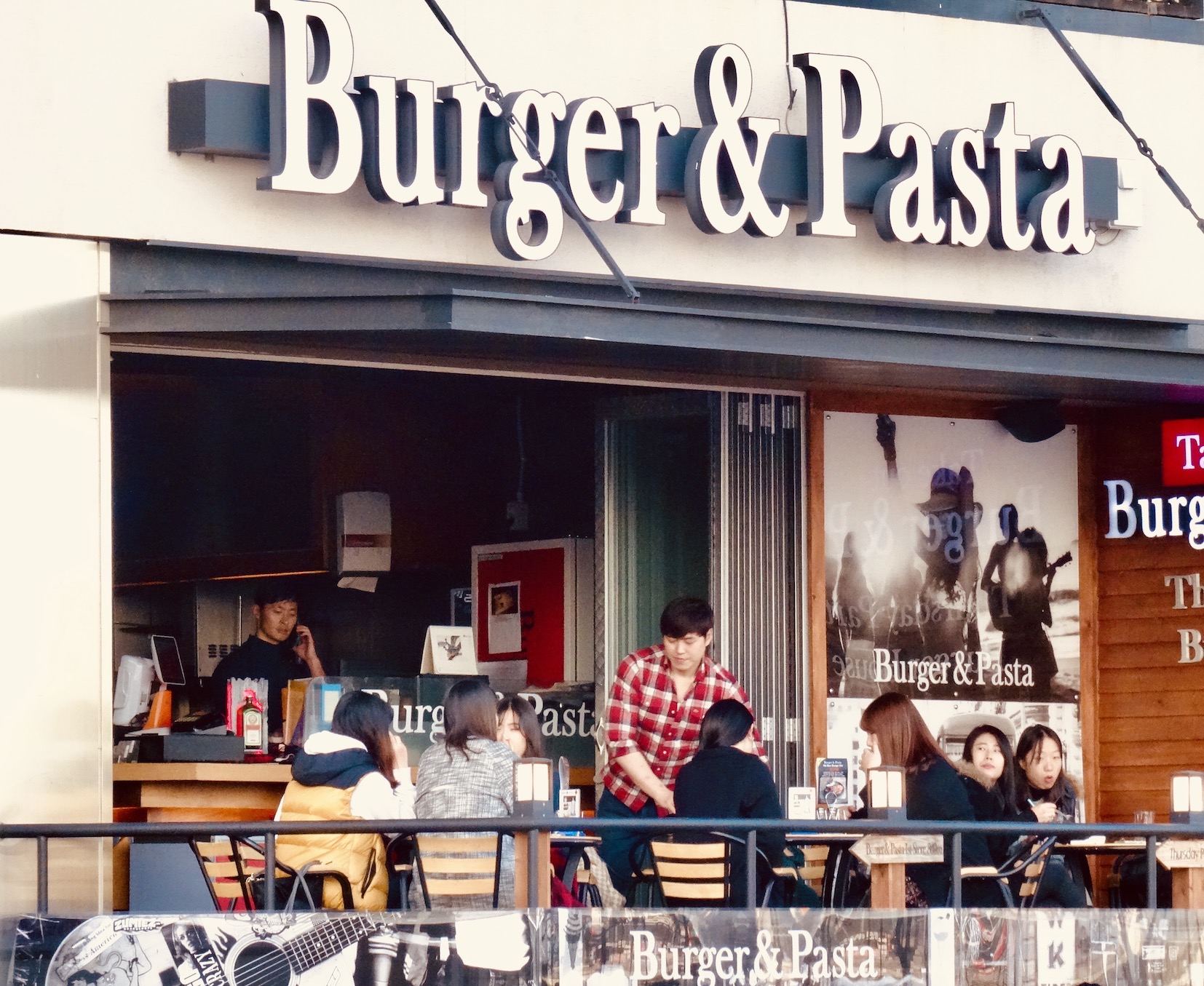 A number of cafes and restaurants line the main road overlooking the beach. After much deliberation, I settled down at the decent, albeit lazily named Burger & Pasta. Following an extended spell eating purely Korean food, I fancied a change. Should I go for the pasta? Or a plump, juicy burger? 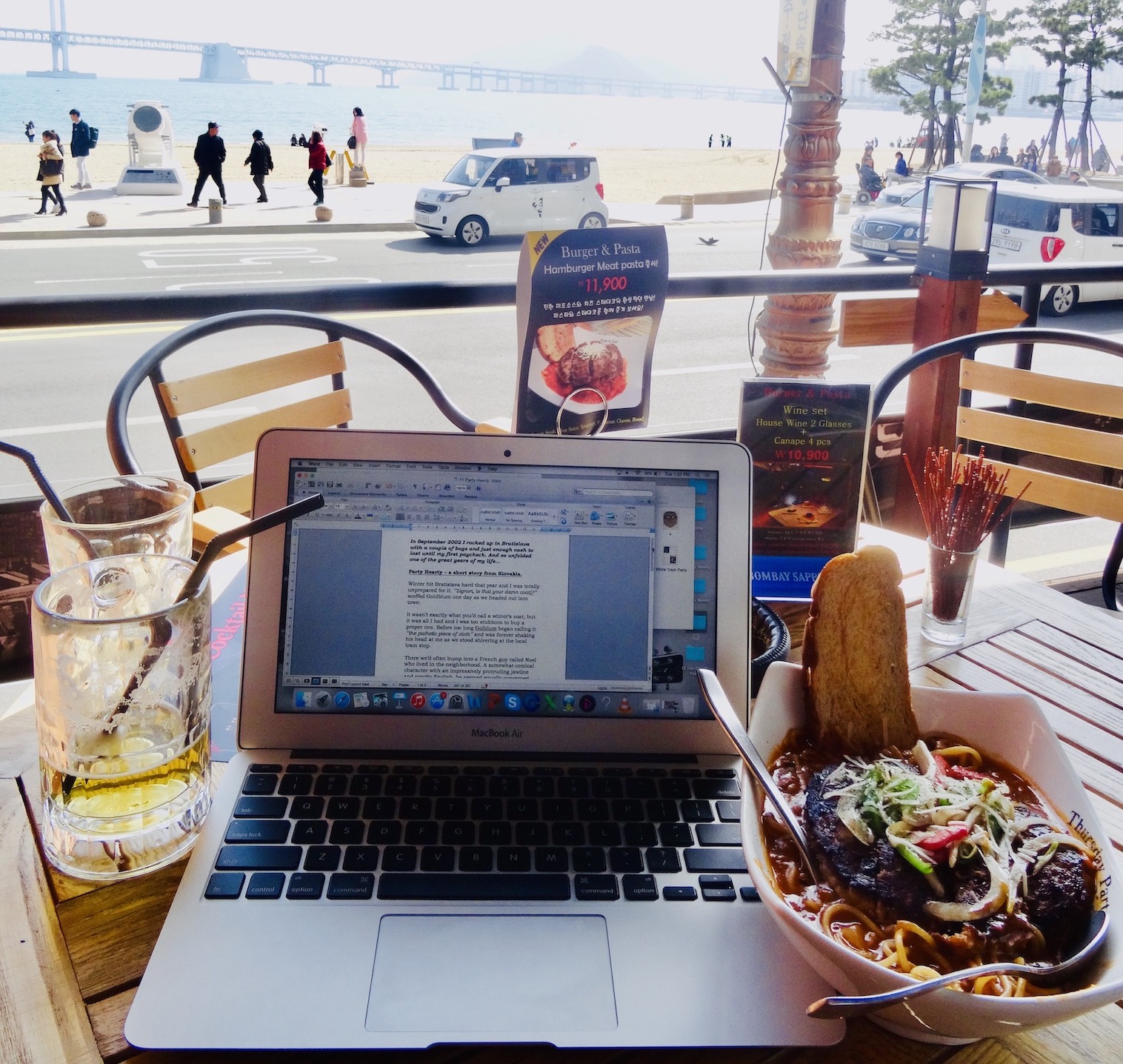 In the end, I settled on a dish that cunningly incorporated both. Basically, I got two thick burgers dumped in a river of spaghetti and tomato sauce. Not too shabby.

Burger & Pasta has seven restaurants scattered around Busan, although online reviews seem to vary wildly depending on the location. With views across the beach, sea and Gwangan Bridge, I ended up staying for a few hours that afternoon, working on an early draft of my short story Party Hearty. 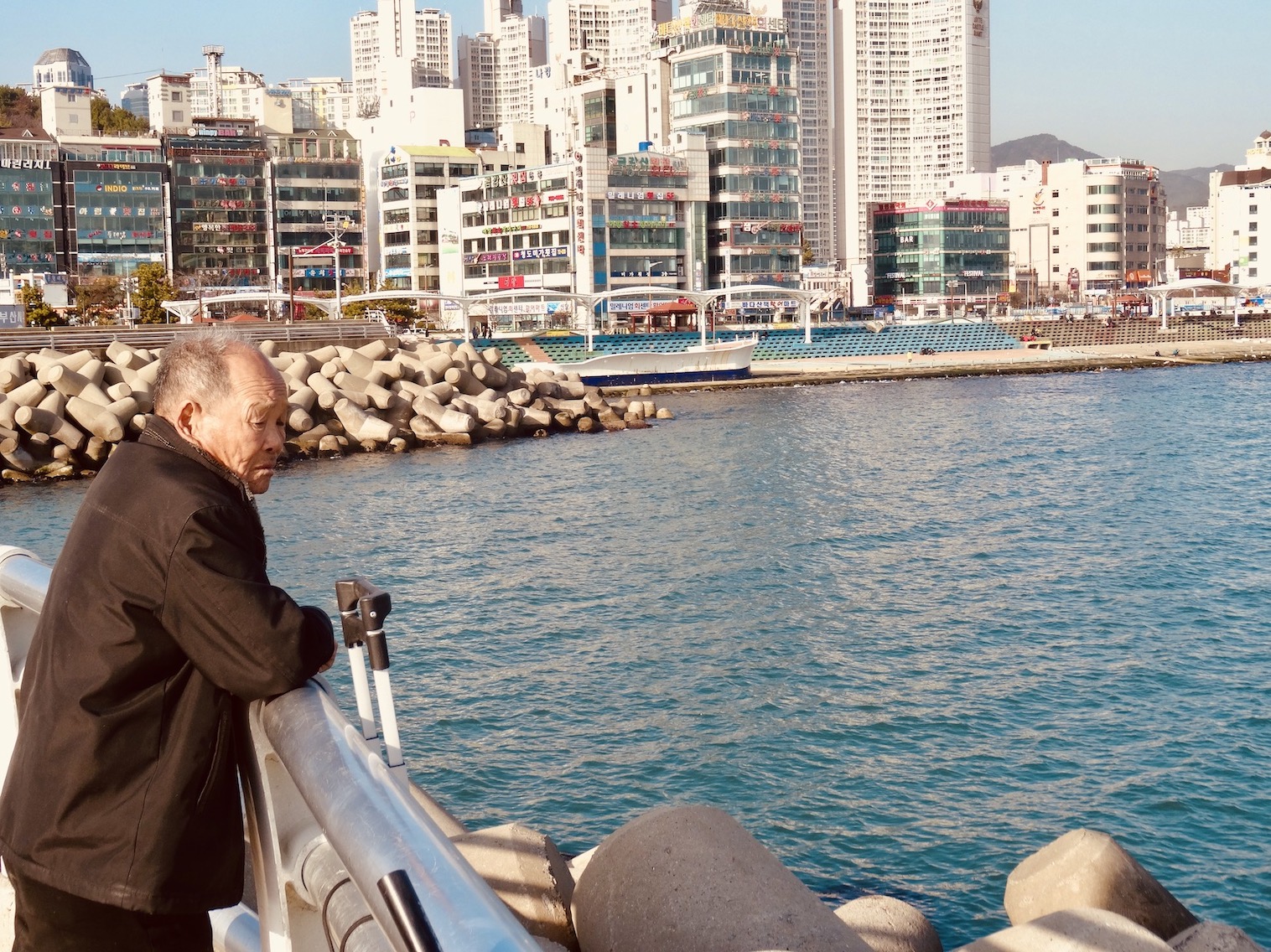 At the far end of Gwangalli Beach there are a series of docks for yachts and small fishing boats. A network of stone piers winds its way around the docks leading to Busan Coastguard Station.

From here, there are fine views of the city skyline in one direction, the sea and Gwangan Bridge in the other. Once again, there were few people around, just a few fishermen and this old man watching the world go by. 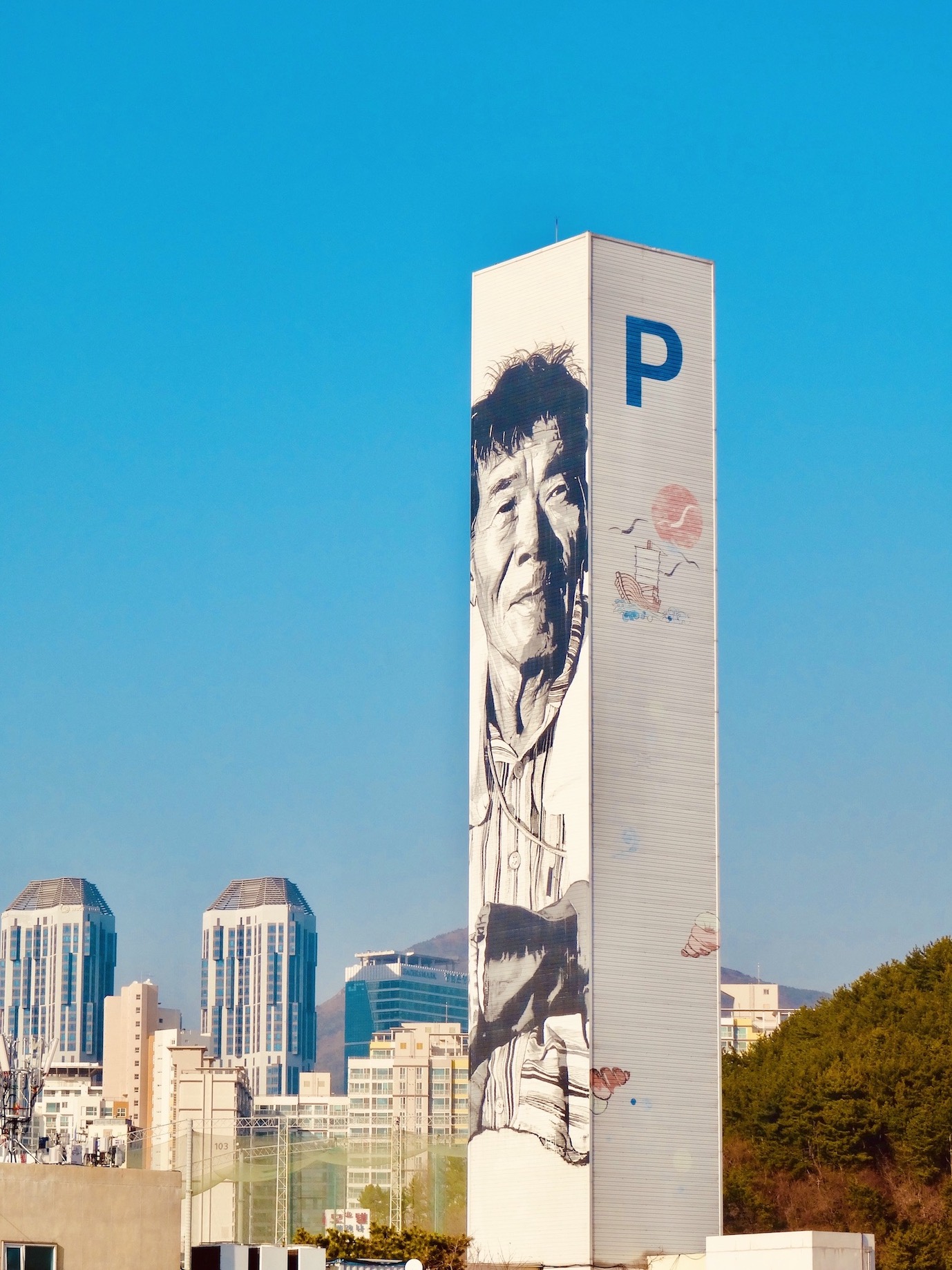 The Fisherman, by Hendrik Beikirch.

From here, another old man caught my eye. This striking mural towers over just about every other building in the city at seventy metres high. The German graffiti artist Ecb, aka Hendrik Beikirch, created it after being inspired by a man he saw at a fish market.

He decided to add his creation to the city skyline in order to highlight the sharp contrast between Busan’s traditional fishermen and the relentless march of the city’s hyper modern landscape. 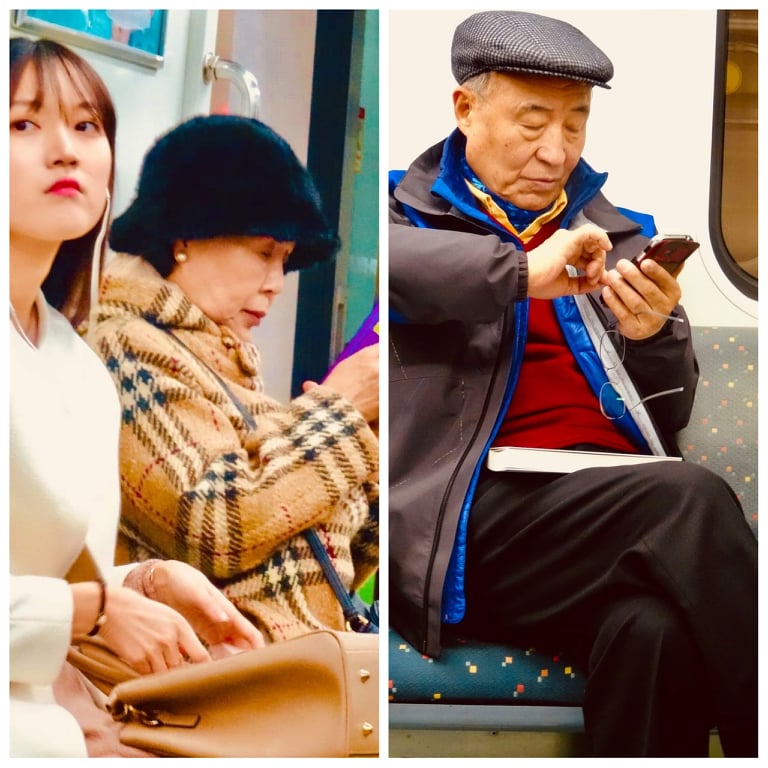 Finally, a quick word on Busan’s impressive metro system. Opened in 1985, this modern, clean, highly efficient network makes travelling around the city a breeze. There are four lines, one hundred and fourteen stations and at the time of my visit a single journey ticket was priced at 1300 Won (£0.90/€1/$1.20). 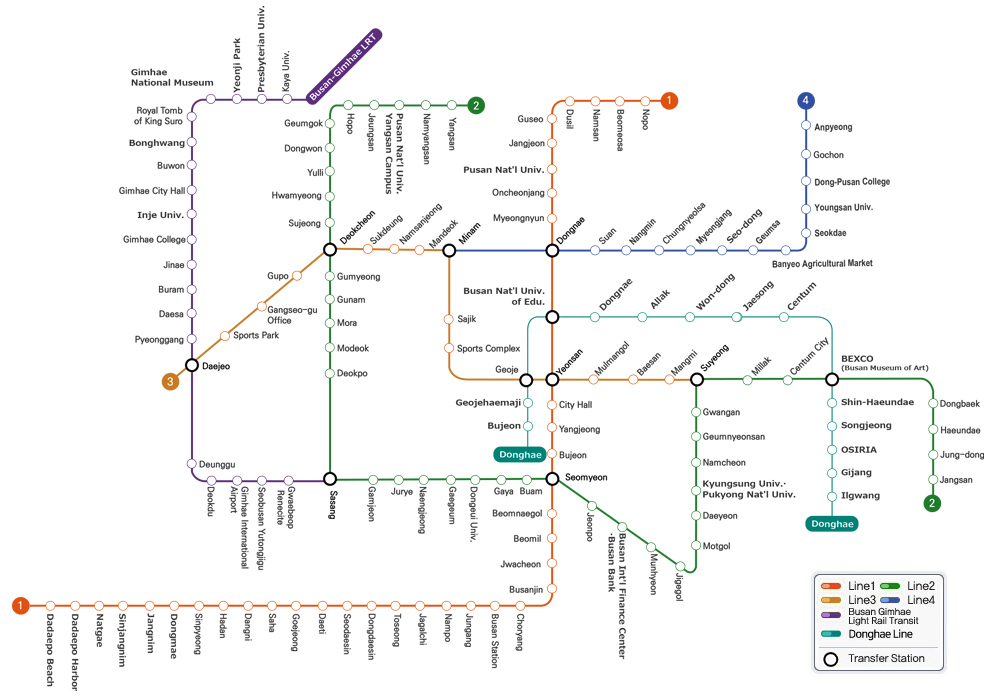 The trains never seemed that crowded, even around rush hour, and you can grab tickets from one of the zillion vending machines in and outside stations. For more info, including the lowdown on the prepaid transportation card Cashbee, take a look at this article by Trazy Blog.